By Flying-Kolia GOLD 615
Published on 26th July 2018
Few weeks before march a friend told me that Jettime was flying with some B737-300 between Copenhagen and some european cities. It was time for me to try this airlines which usually fly charters to some sunny cities. I was looking for which cities it was possible to fly. After few searches I found Amsterdam. So I booked it.

Before to board on this flight I was flying from Paris, on an Airbus A320 SAS. It was my first time flying on the one of SAS. It was a nice flying, whether at Paris was sunny nothing to compare to here… But anyway that's not a problem for me. I got some time between both flight so I took time to eat something. Then I went to the gate, and my plane arrived. 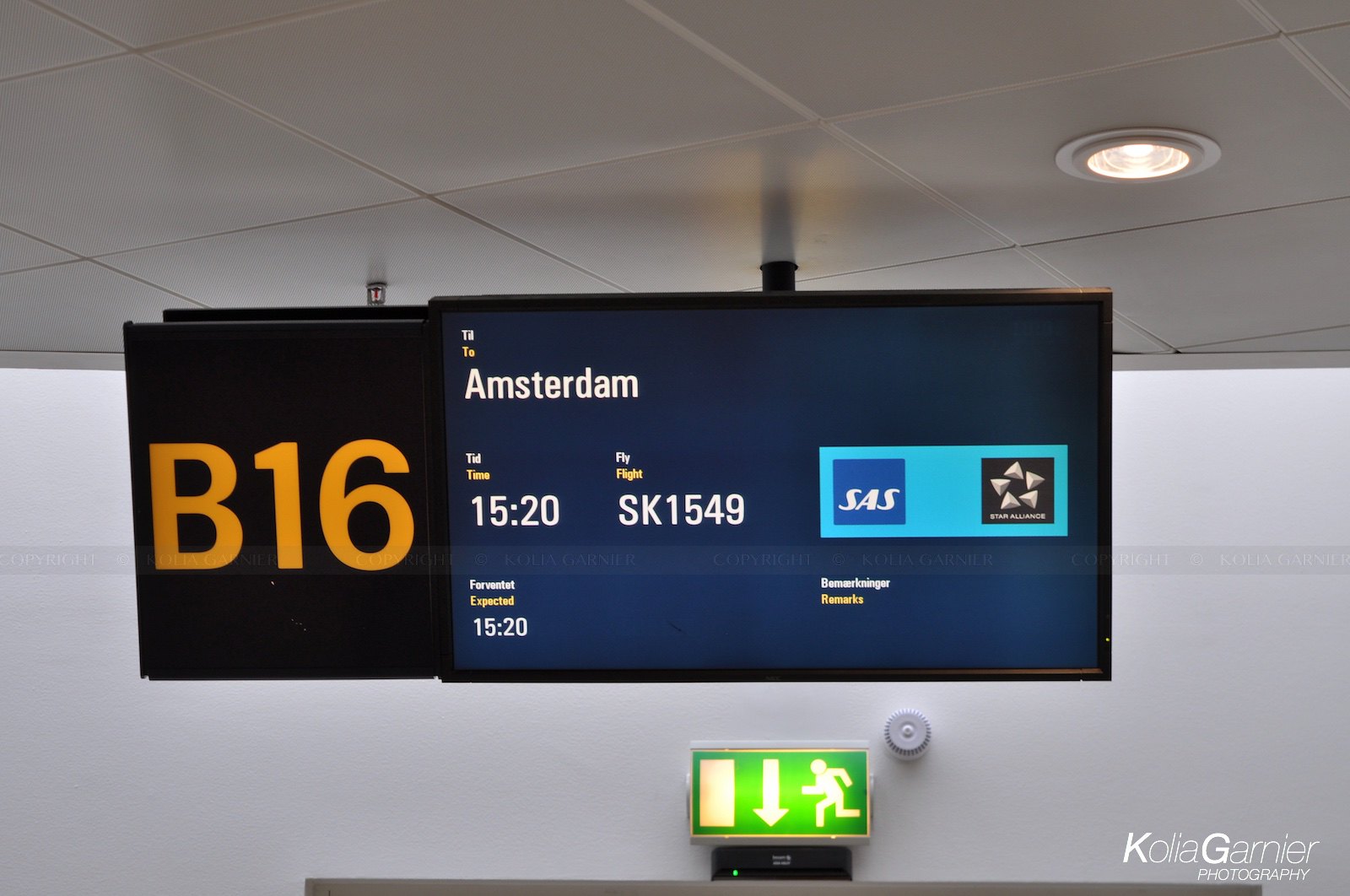 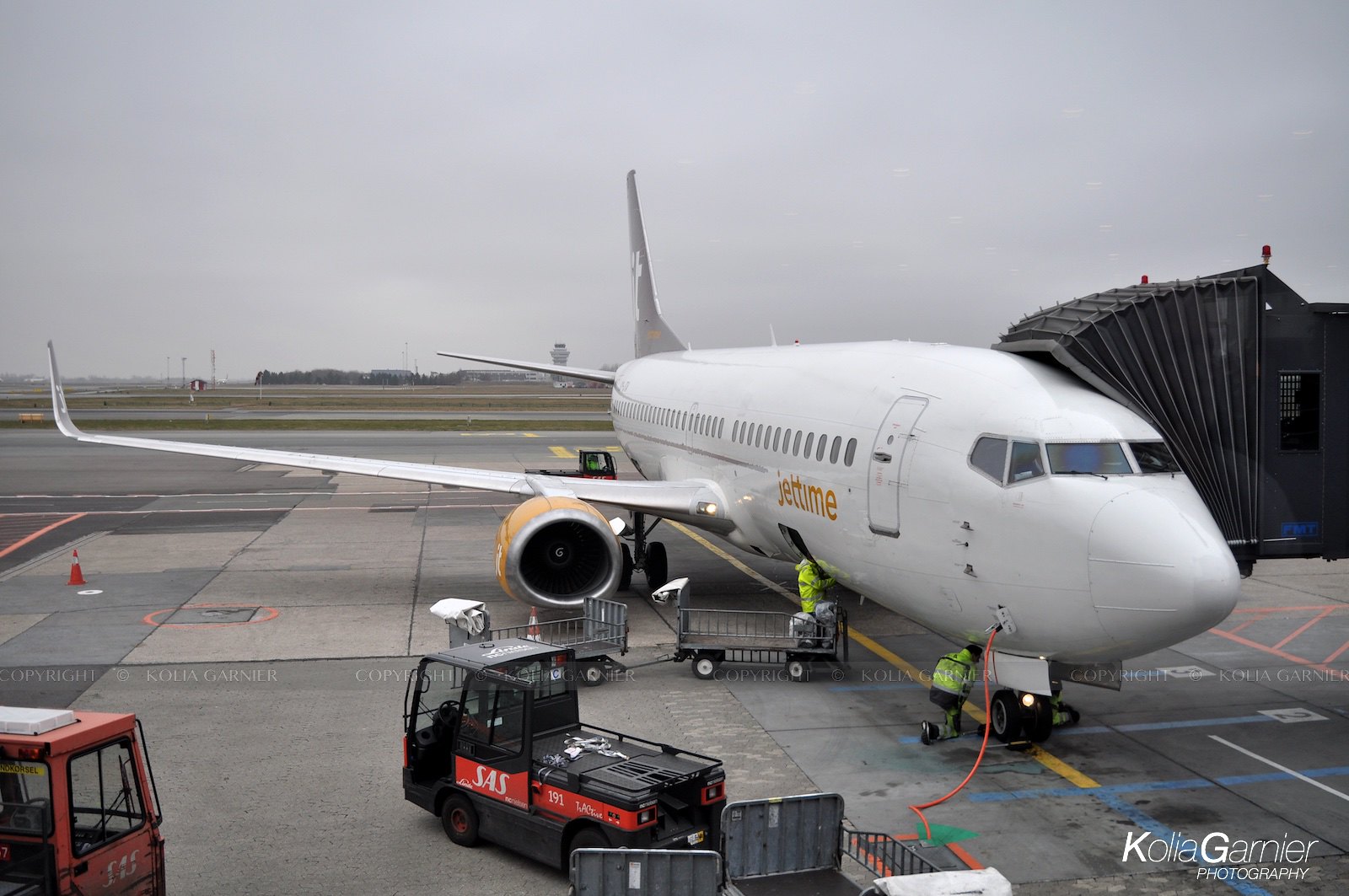 It's time to board, today will be the OY-JTA (first flight in 1987) and it has winglets. This is my second time on a B737 Classic with winglets. Jettime has some planes without winglets OY-JTF (Heritage Elevators). When the plane arrived the pilot forgot to light off the taxi lights. Then now it is time to enter into the plane to see what it is looking like.

Boarding completed, push back made, now it's time to taxi. I have a nice view over the wing. The engines' start was noisy but like all B737 Classic. Then we had the safety demonstration which was made and a last cabin check. After all we taxi into the take off runway. Next to me there was only one passenger, more comfy.

​Now ready for take off. I will be a west to east take off. Next to us a Flyco car watching our take off, just in case. Quickly we speed up and start to fly. We had a nice quick view over Copenhagen airport before to enter into the clouds. After few minutes we turn into the right allowing us to get view above the clouds. 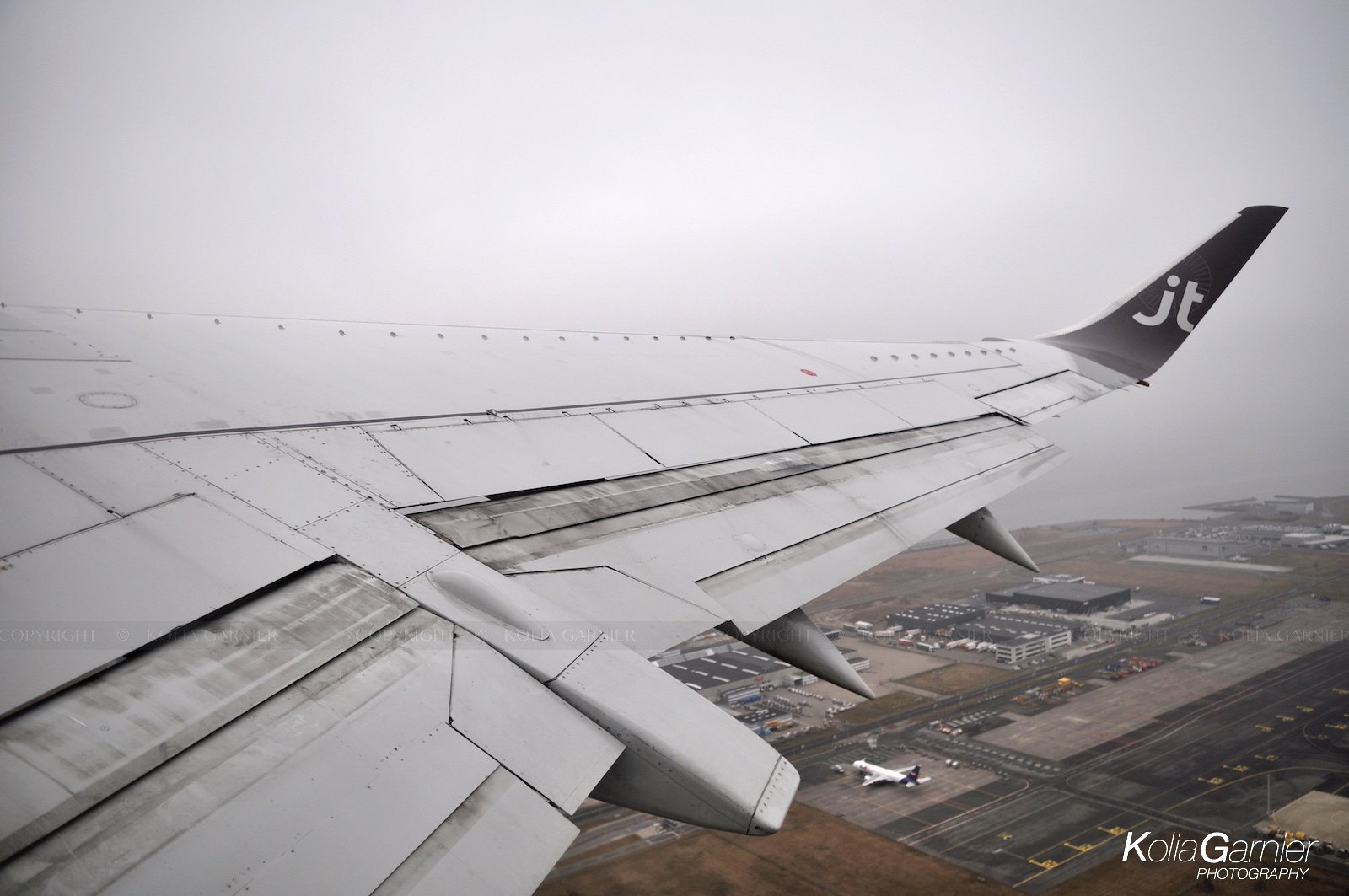 ​I agree the from the ground clouds are sometime a bit annoying and not so nice, but when you took off and are above the clouds, the show is different. I really enjoy this view from the porthole. Then we climb to our cruise altitude which was around 35 000 feet. During our climb we were able to ear the stewarding preparing their trolleys for the tea and coffee service.

​Now we are to our cruise altitude and the seat belt sign is off, we can have a look to what we have into the seat pocket. So we can find : the safety card, the Jettime mag, the SAS menu and the sickness bag (which is all white - cheaper). The the stewardess arrived to my row and offer me some tea. I took with me some biscuits to go with the tea.

I took time to drink my tea and to read te onboard magazine. Then I relaxe a bit by watching thought the porthole. We were just at the level of the Cirrus clouds. I thought that I was on the right side cause I got nice light. Then because I was willing to discover a bit more this old lady, I went to walk a bit into the plane.

​I went to visit the toilets, like the plane they are old but in mint condition and clean. During short flights like the one of today no many passengers stand up to go to toilets (but it depends). Then I had a look at the cabin. It is bright, but to be honest, I hate the new RECARO seats, hard and look quiet cheap. After this little walk I went back into my seat. 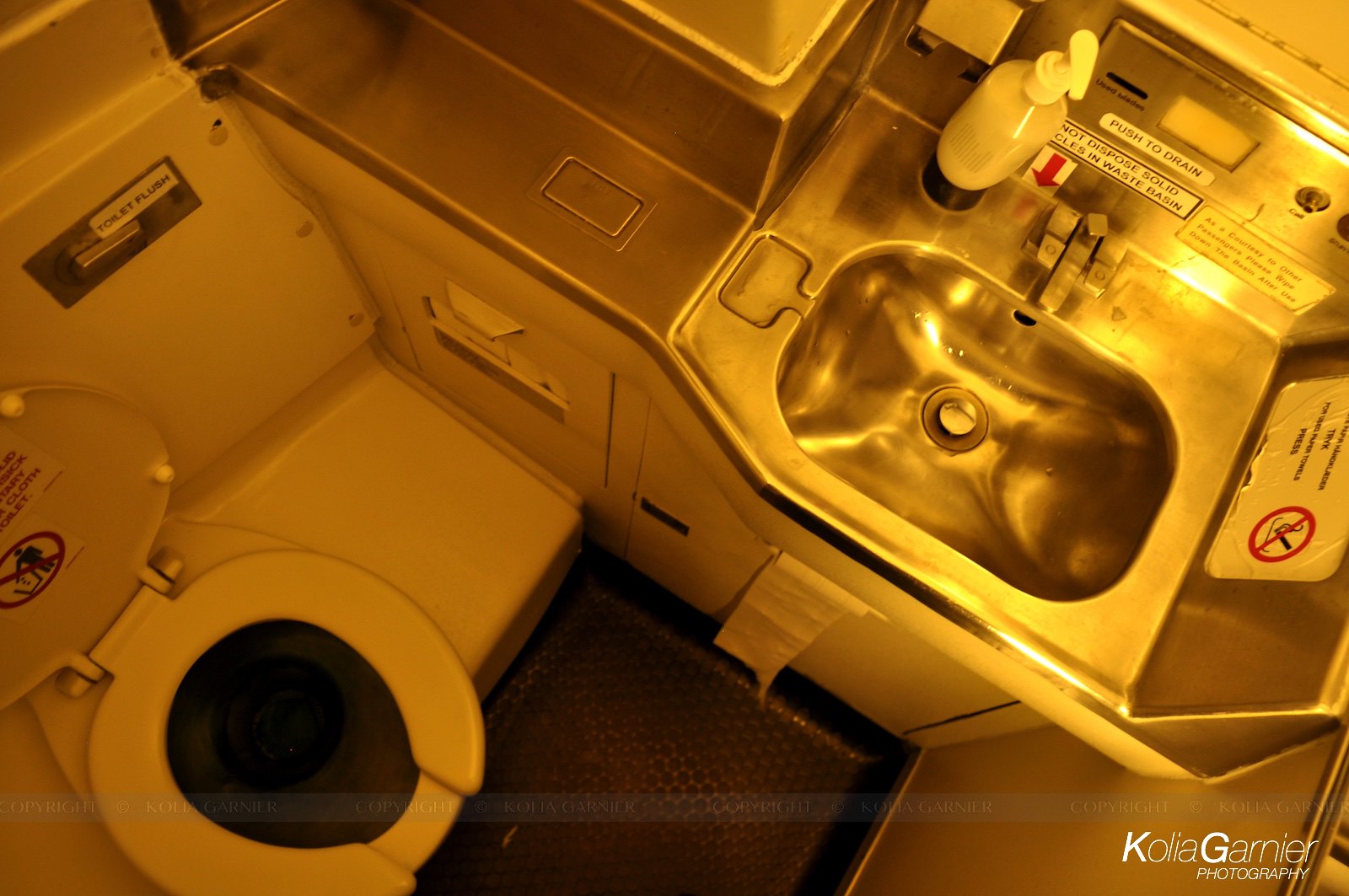 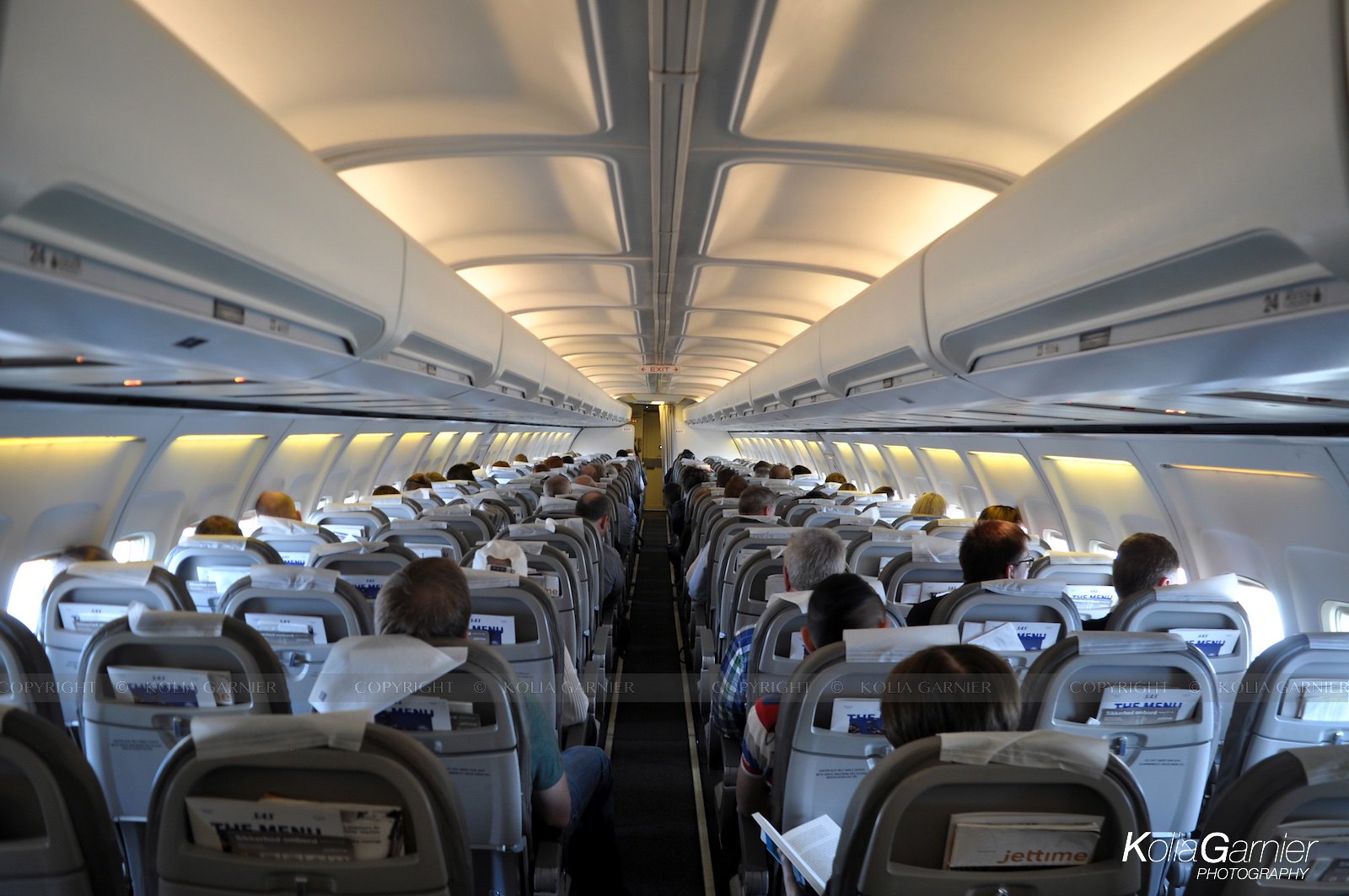 ​I think that's a nice view. The seat and the porthole, having with background the winglet which have the airline's logo. The pilot switch on the seat belt sign, we are starting our descent into Amsterdam, the crew is doing a final cleaning tour and then a final safety check before to land and then sat to their crew seat.

​Now it's time to descent to Amsterdam airport. Weather looks nice, but a bit froggy. I really enjoy the sound of the flaps expending to allow the plane to fly easily on the low altitude. Now we are lower and close to land. I enjoyed the field view around Amsterdam. Touch down, nice and soft landing in Amsterdam airport.

Now it's time to taxi into our gate area. During the landing we passed next to the cargo area. We were able to see three 747 cargo and a single MD11 Cargo. We were lucky because we had a short taxi. Sometime in Amsterdam airport you can have a very long taxi which can be a bit annoying sometimes. But today it was fine.

​Now we are arriving to our gate. Next to us many 737 Transavia. Some are having the new colors and some other the old colors. Clever idea, you can observe that the airport's windows shades are down due of the sun. I think that it's a good idea, but it doesn't allow us to take planes' pictures…

… Last turn, cabin crew disarmed doors. Now were are arrived to the gate and passengers are ready to disembark. A last view outside, and now we are getting ready to board again on the same plane to fly back to Copenhagen.

​To conclude, it was a nice SAS flight operated by Jettime. It's nice to fly on old planes like this one, which in good condition. The crew was nice, but a bit cold (especially during boarding). The seats are just enough for short flights… But really hard for longer flights. I really don't like the RECARO seats. My global impression is positive, a nice flight on the old cow.

Thank you for your reading and see you next flight !
See more

I was happy to realize this special flight, because I was willing to do it since last year. Nice to get a classic plane these days. But a shame because I had the hard seats which are not so comfortable. The crew was absent during this flight. But I made a nice smooth flight. Now let's fly back to Copenhagen.

The contributors of Flight-Report published 6 reviews of 2 airlines on the route Copenhagen (CPH) → Amsterdam (AMS).