1 – LITTLE GREEN
After some visiting of Kyushu region it’s time to fly back to Tokyo. But I was wishing to discover a new small airline, Fuji Dream Airlines. The interest point of FDA is that each plane has her own color and it has a fleet with only Embraer 170/175. Quiet interesting.

So I woke up early this morning to go to the Fukuoka airport, which is very easy to reach from the city thanks to the metro (very convenient). When I arrived into the FDA counters they were close. But I saw something interesting, there was the flights departures board showing which plane was flying, on the different routes. I found that great. Especially because each FDA’s plane has her own color. 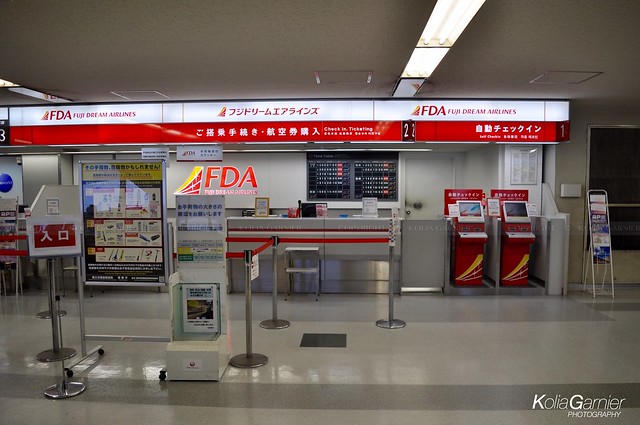 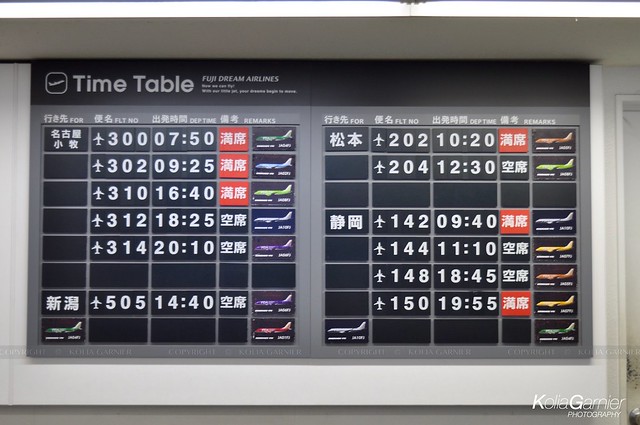 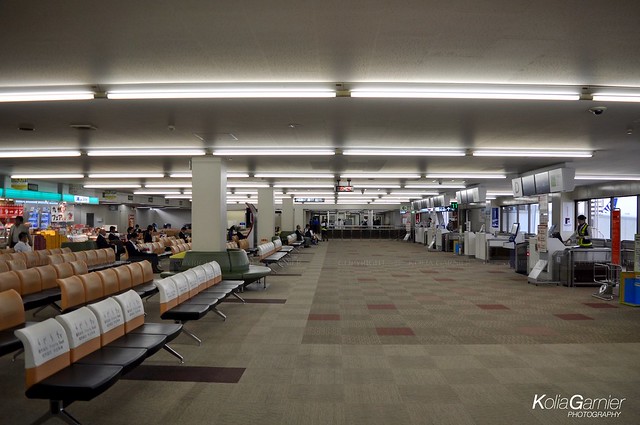 Later on, I had my boarding pass, and I went to waiting area. It quiet at this time. I found it quiet special due of the room organisation. The negative point of this waiting area, was that it was difficult to realize some spotting from there… Anyway I wait a bit and our boarding was called. 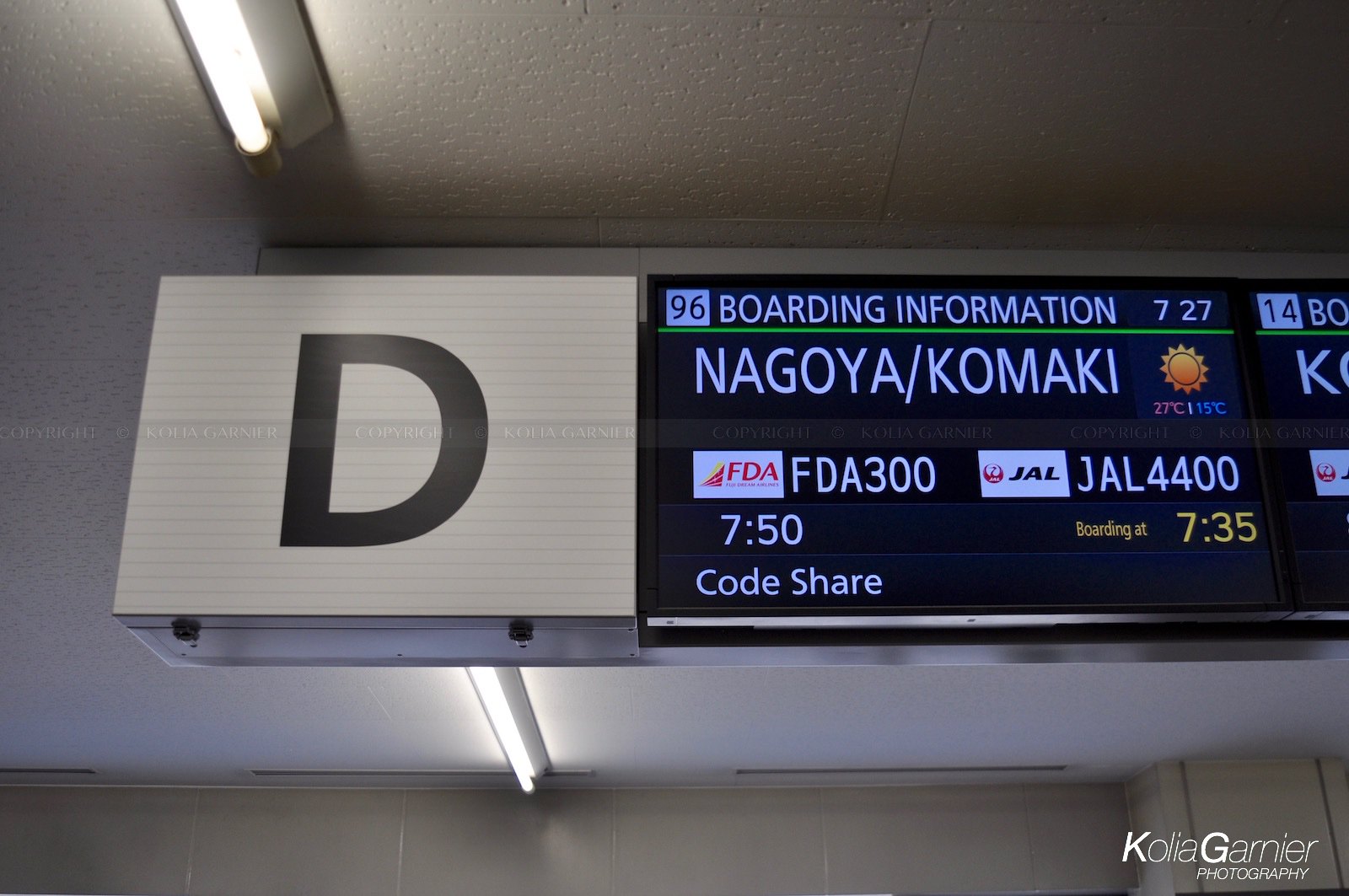 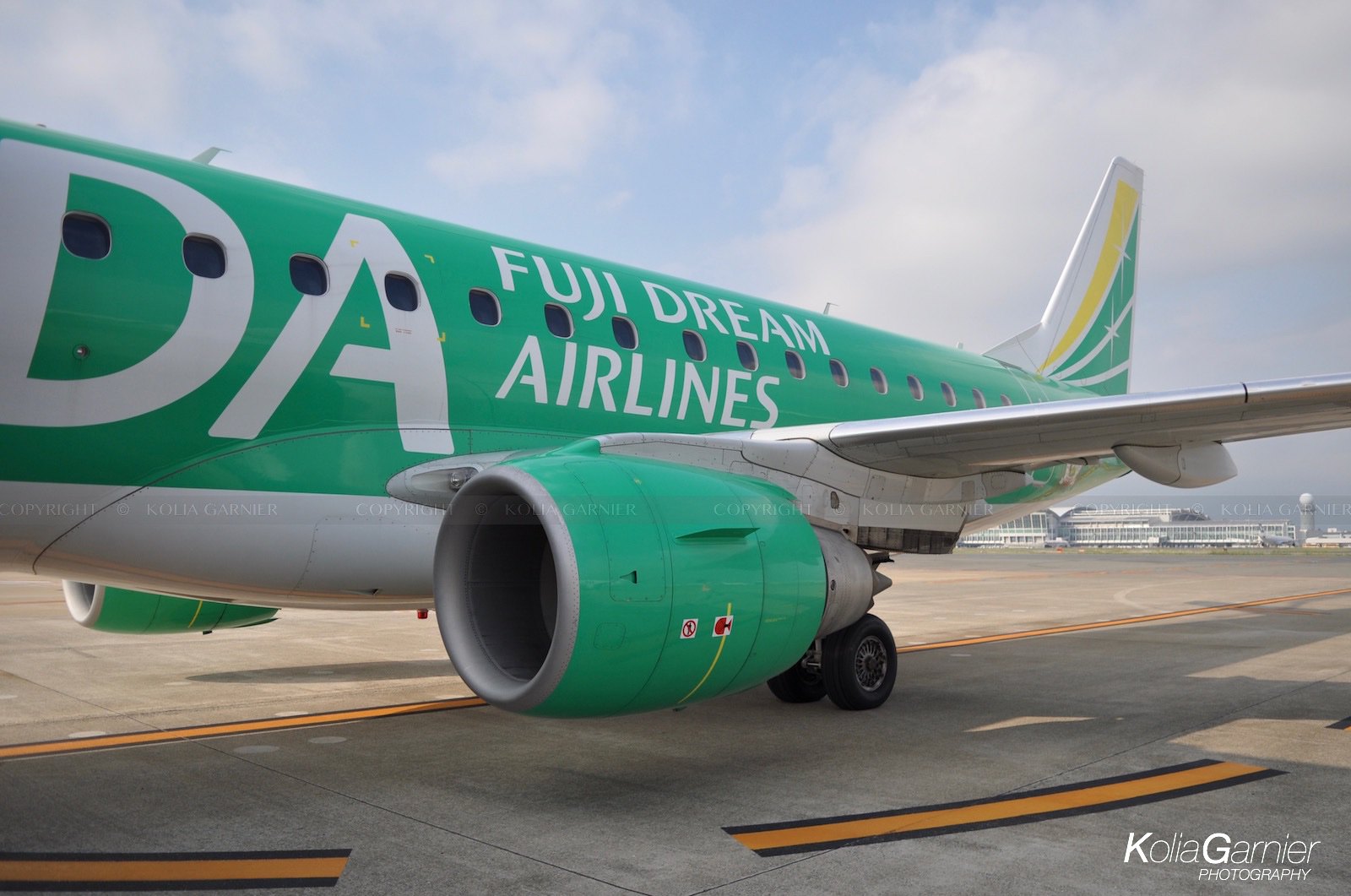 A lady gave us a card with the number of the gate. Then we took a bus to go to the plane. I was exited to see inside, today’s plane was all green. When I enter into the plane I was welcome by a stewardess, the second stewardess was in the middle of the plane helping passengers. Then I arrived to my seat. 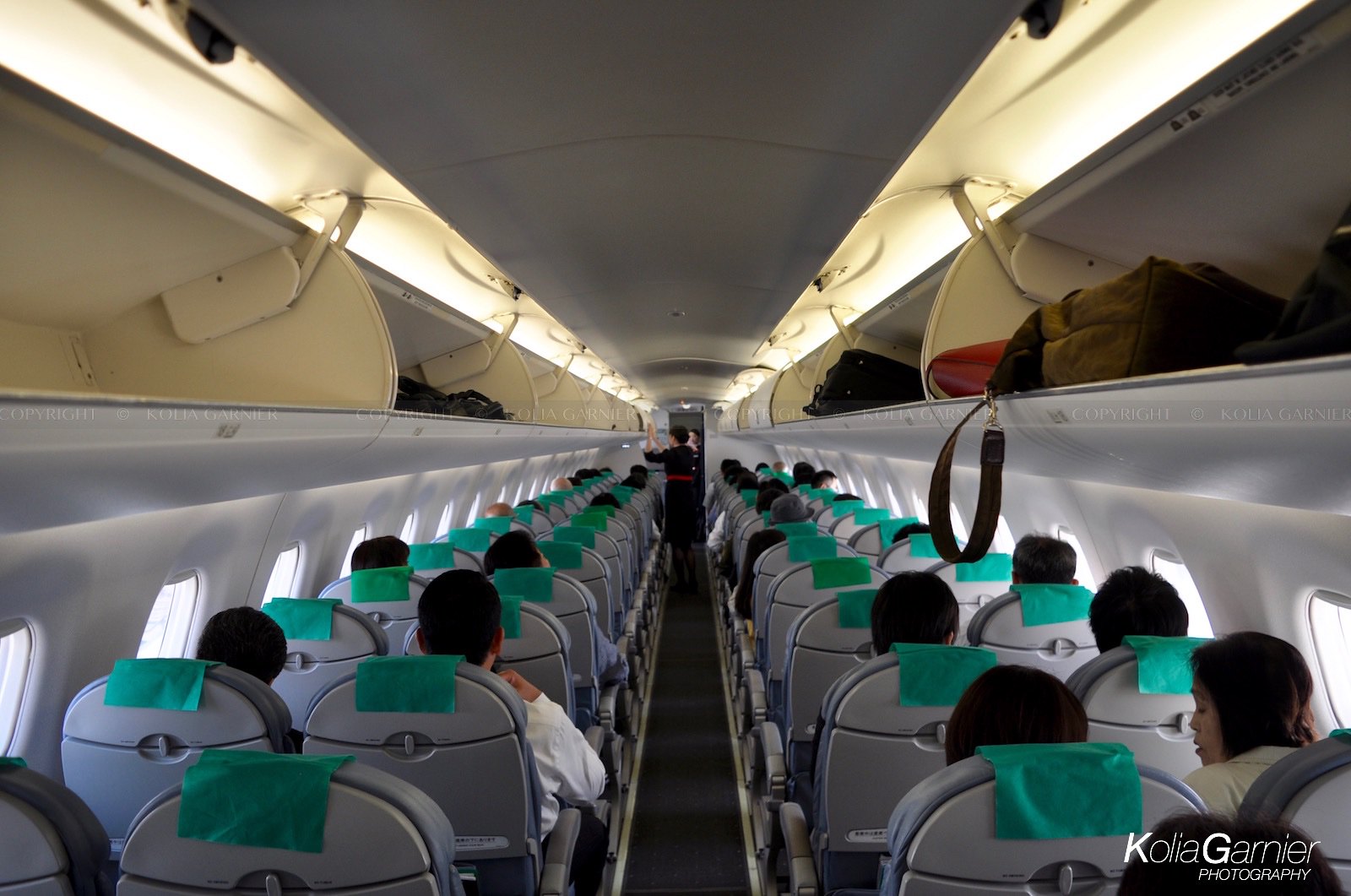 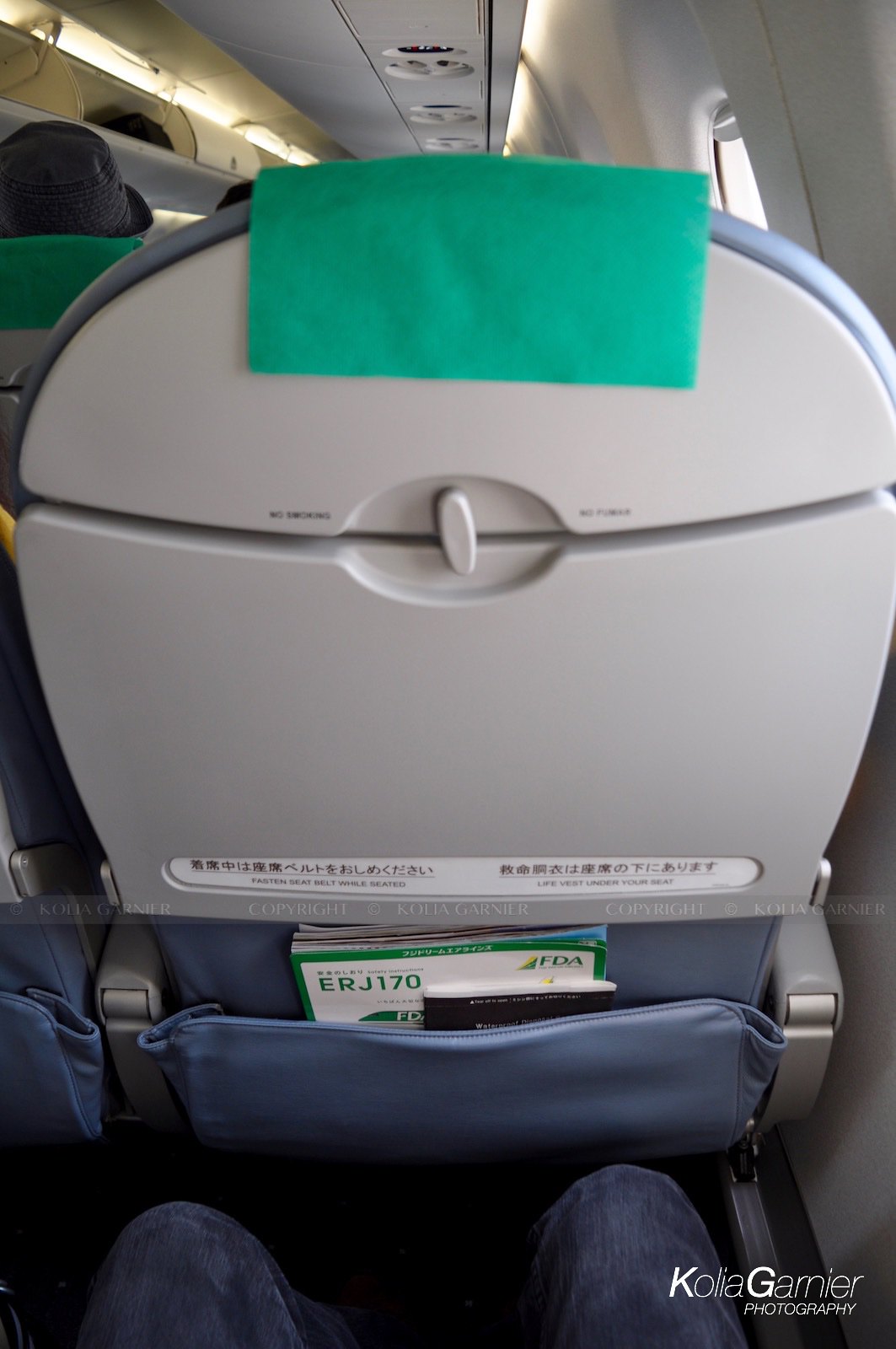 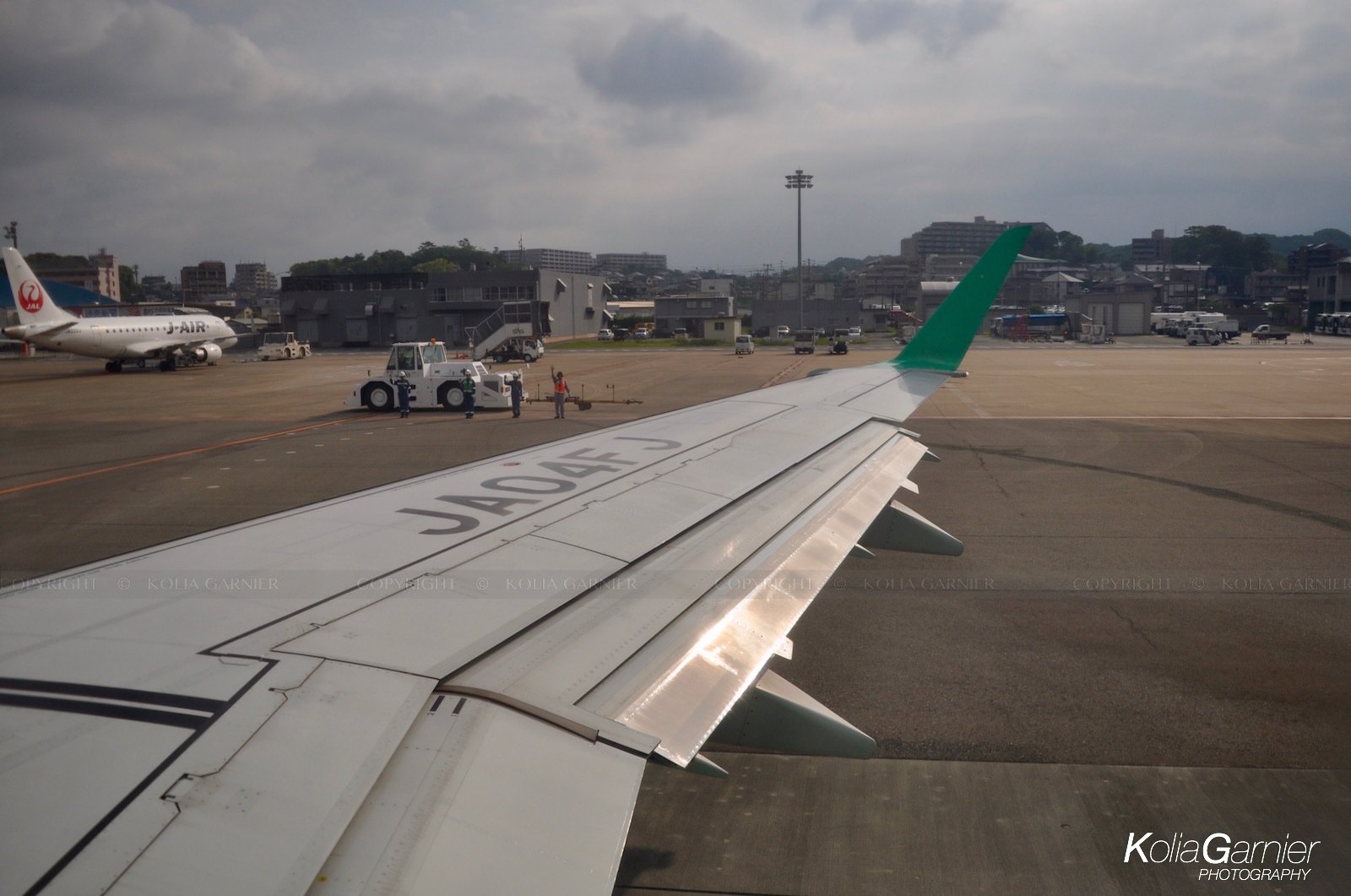 The seat was comfortable, with a nice pitch and the cabin was looking nice. All headrest were green, the plane color. Then it was time to push back. The plane was less than 50% full, so much space. At the end of the push back, the ground crew was saluting the plane before his taxi. 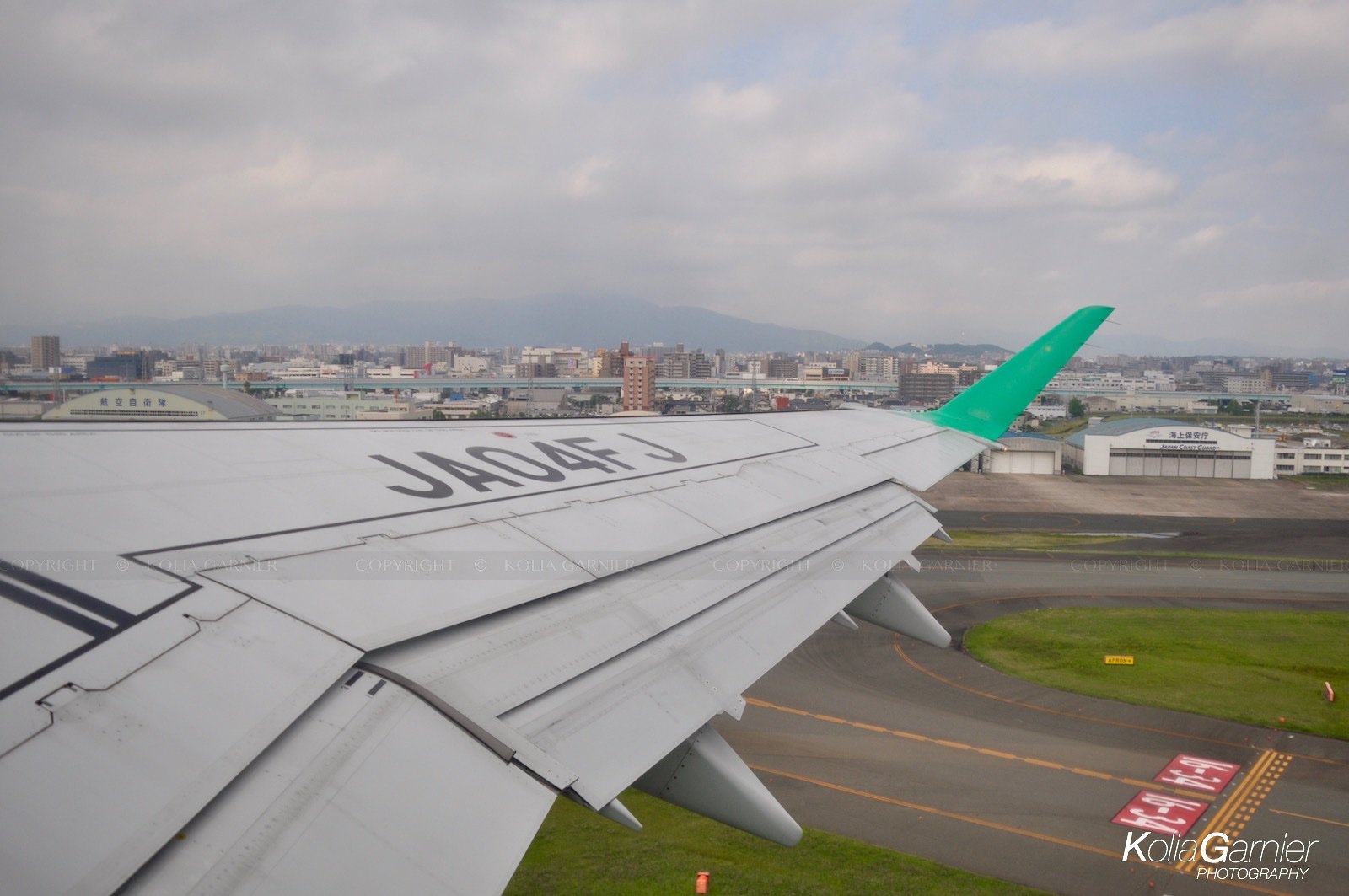 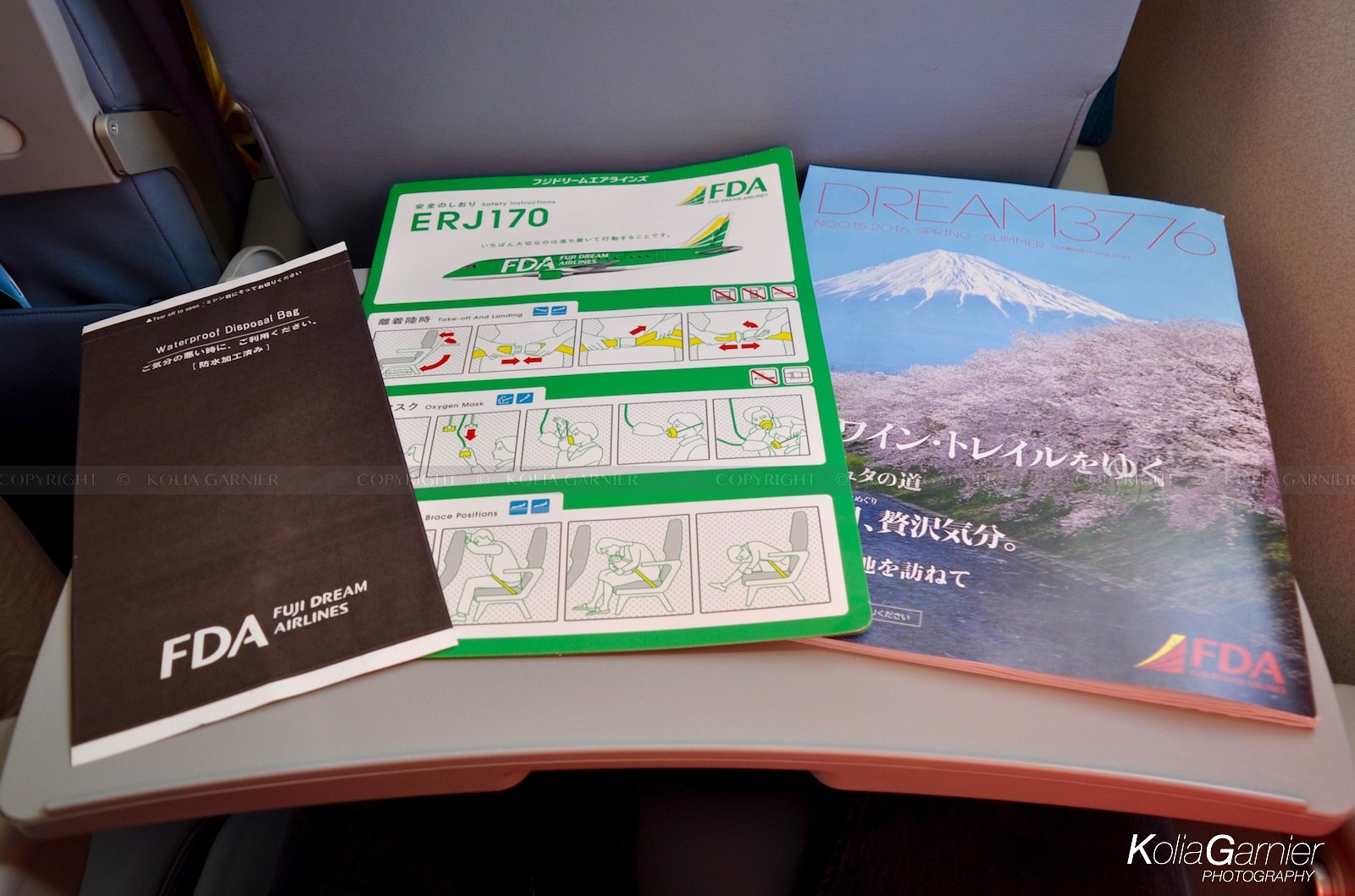 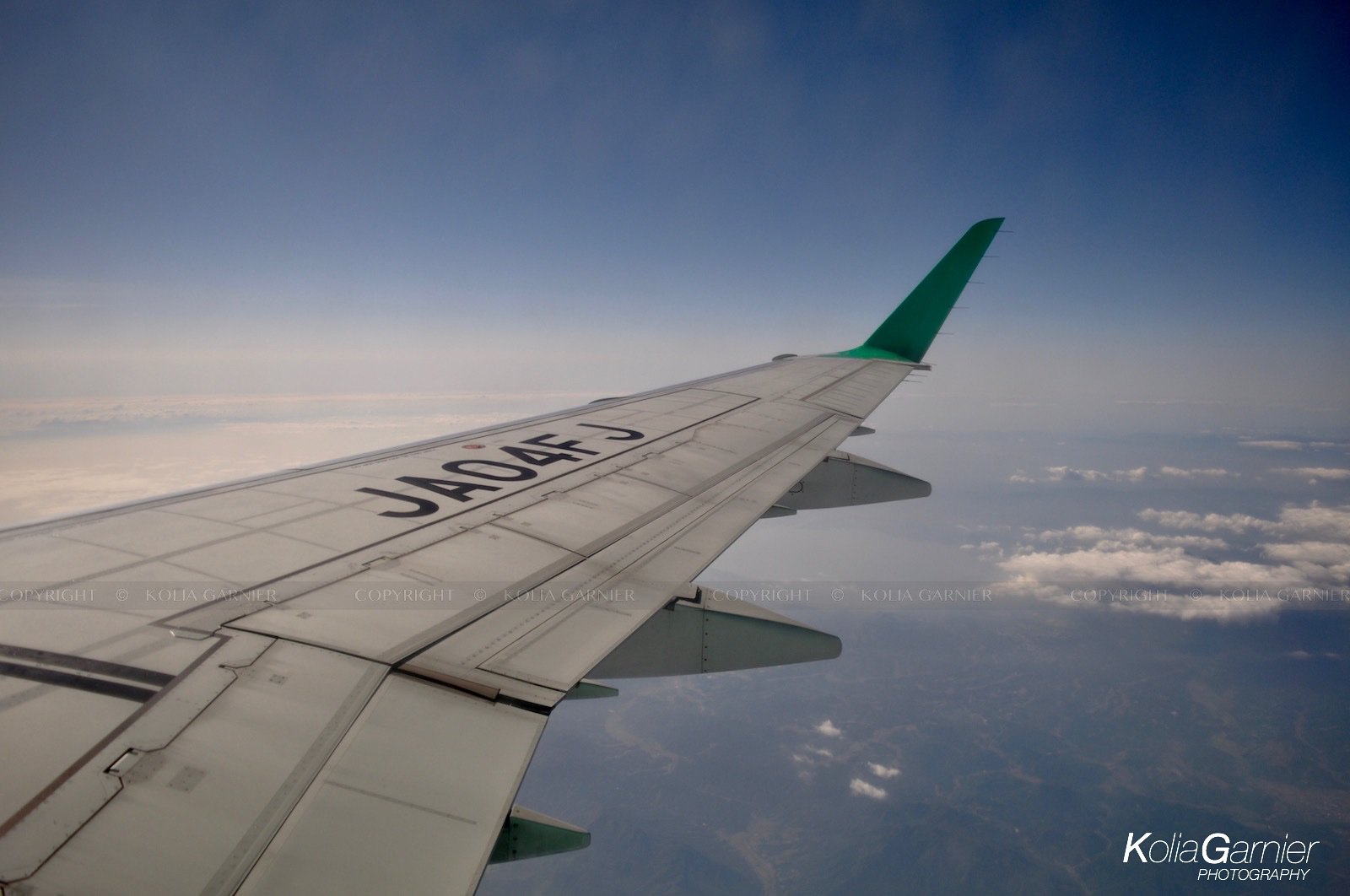 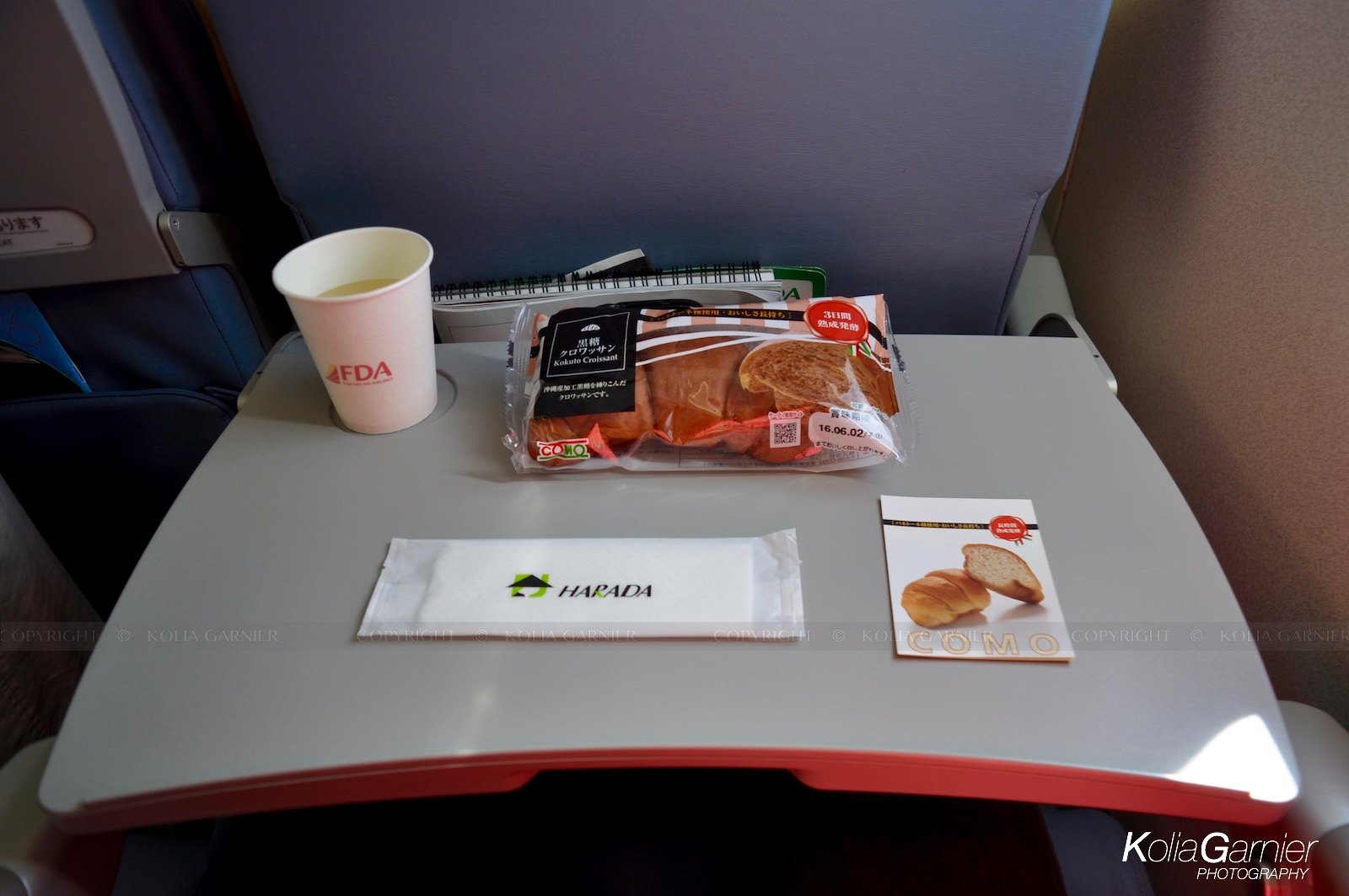 Take off was fine, and later on we arrived to our cruise altitude. Let’s see what we have into the seat pocket : the sickness bag, the seat pocket, and the airlines’ mag. It is called DREAM 3776 which is the altitude of the Mont Fuji. Then the crew gave us something to eat and drink. It was a pastry like a croissant, and I took a orange juice. Then we started our descent to Nagoya Komaki. Before to land I received from the crew some candies. So kind from them after I had a little chat with them. 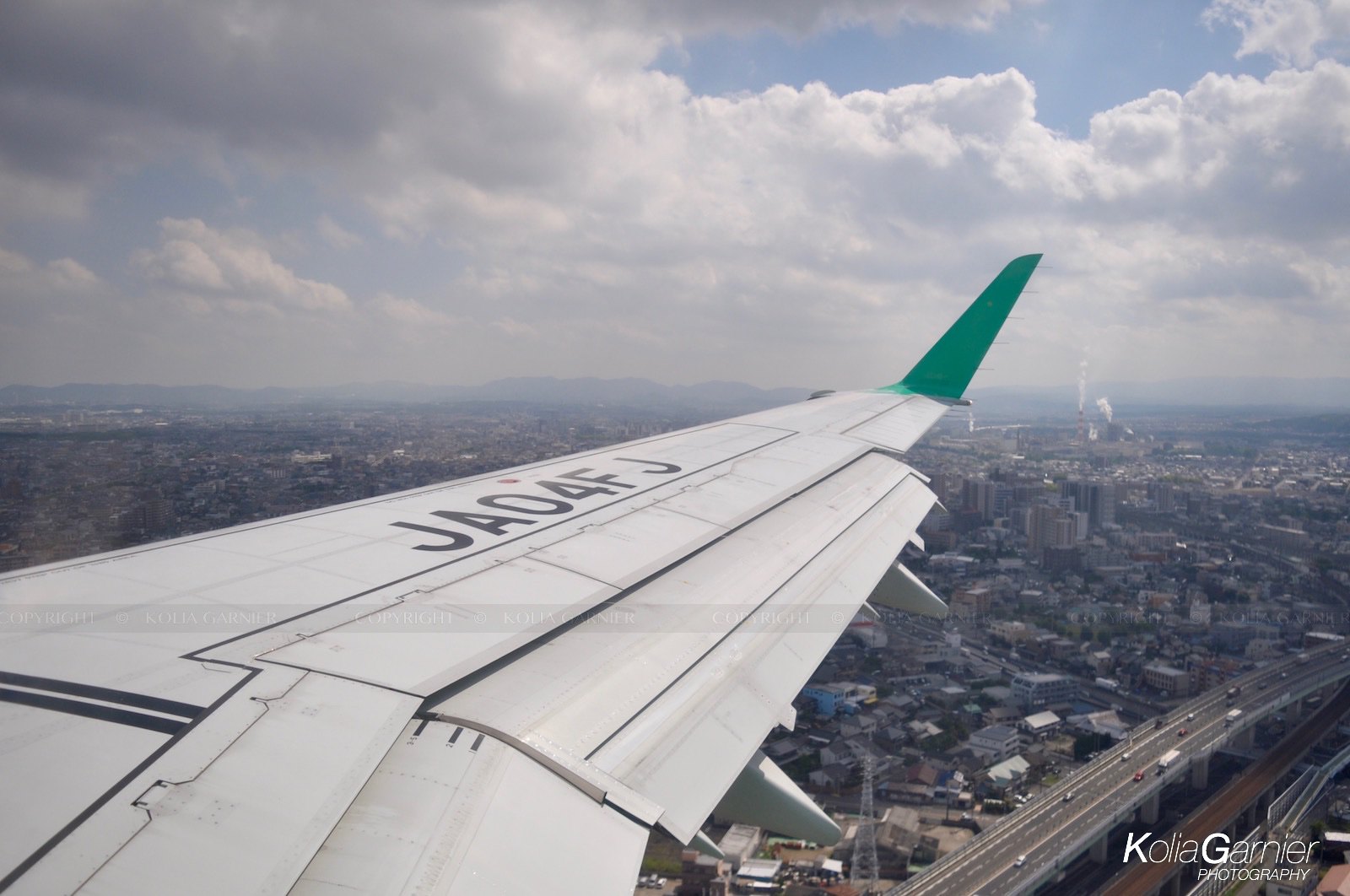 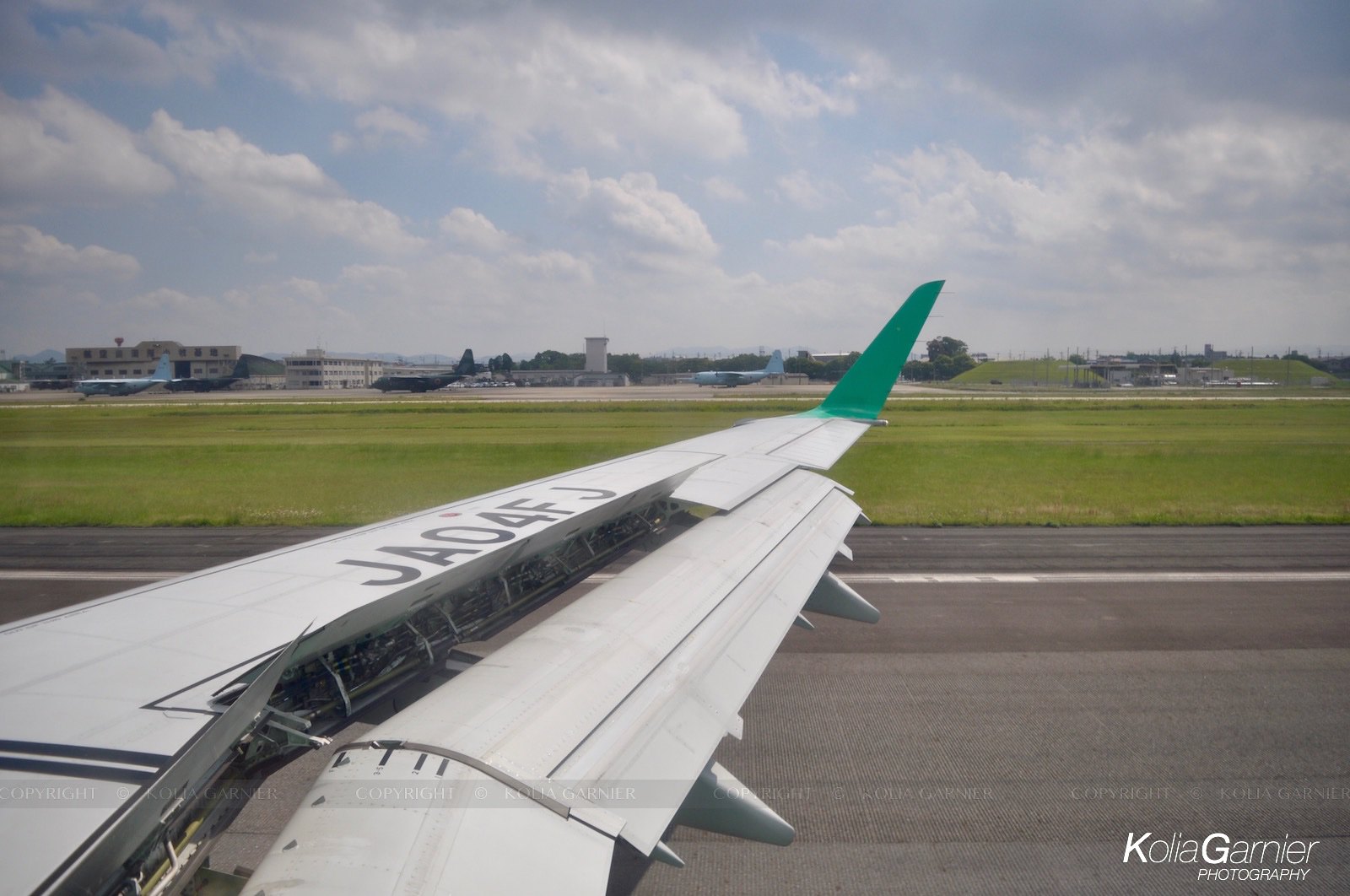 The landing was hard, especially the breaks, the pilot was not willing to misse the exit, allowing him to arrive to our gate. Komaki airport, has civil and military actions, but also I was able to see two MRJ planes, which were a bit far away. When we arrived to the gate we quickly disembarked from the plane. I had to be quick because I had an other plane to take, but from Nagoya International airport. And I have to take a bus and a train. 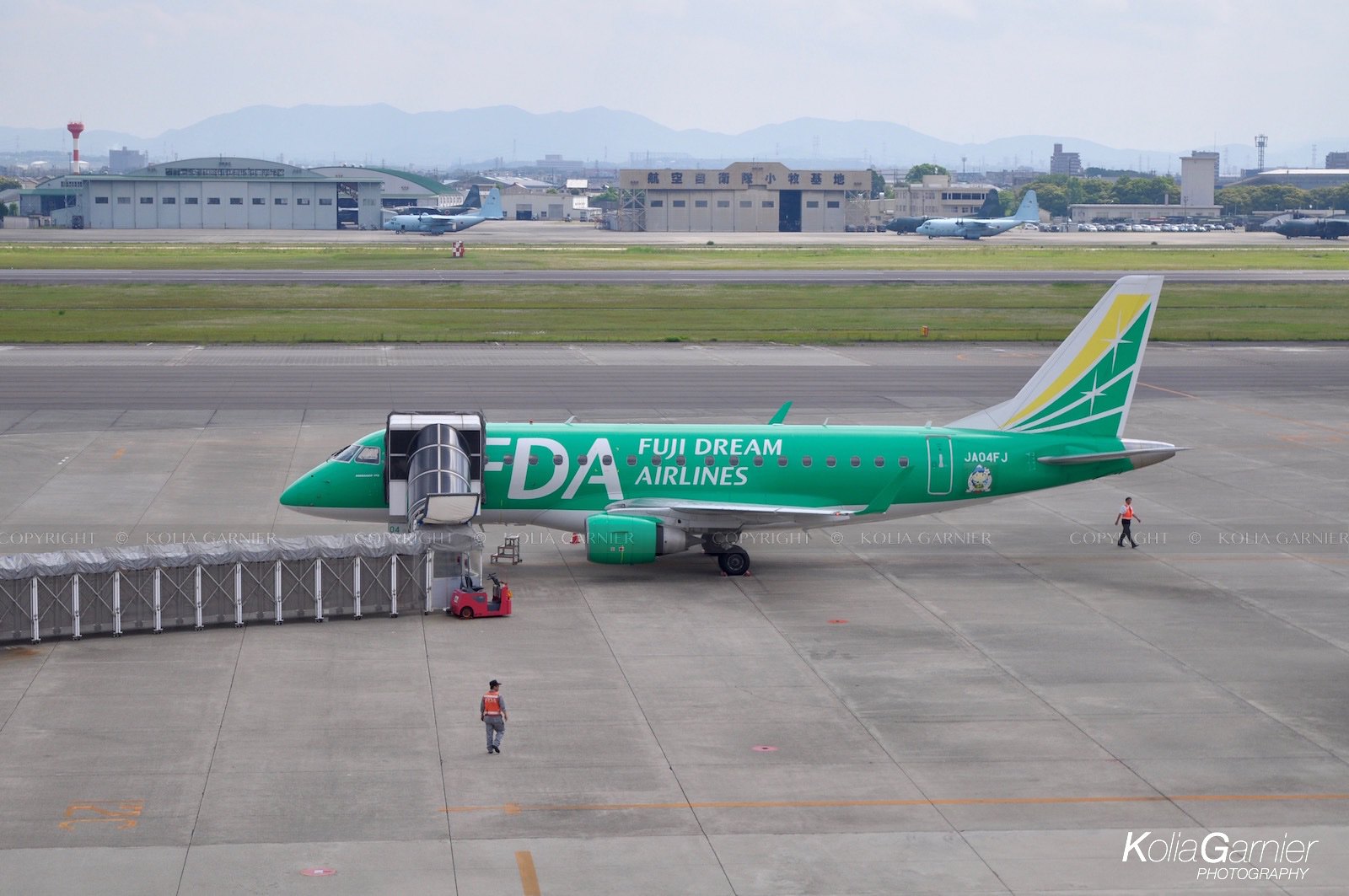 Here for you a little bonus about my visit in the Kyushu region.

Tori in a temple in Fukuoka

Fukuoka's beach (I dream to sleep one day at the Hilton on the background, so impressive !)

To conclude I really appreciate the ride on this plane and airlines. The crew was really nice and very professional. I also like the airlines’ style : one plane – one color. I really want to fly again with them. Thank you FDA for this nice flight !
See you next flight after my bus and train ride to Nagoya International Airport.