By Trojans 8583
Published on 19th February 2019
Welcome to my trip report covering BOM-EWR in United's new Premium Plus (Premium Economy) seat. I don't have too many pics of the service given cabin was dark throughout but still wanted to give some feedback on these new seats.


BOM airport was decorated outside for Chattrapati Shivaji Jayanti(Birth Anniversary) that falls on 19th Feb. 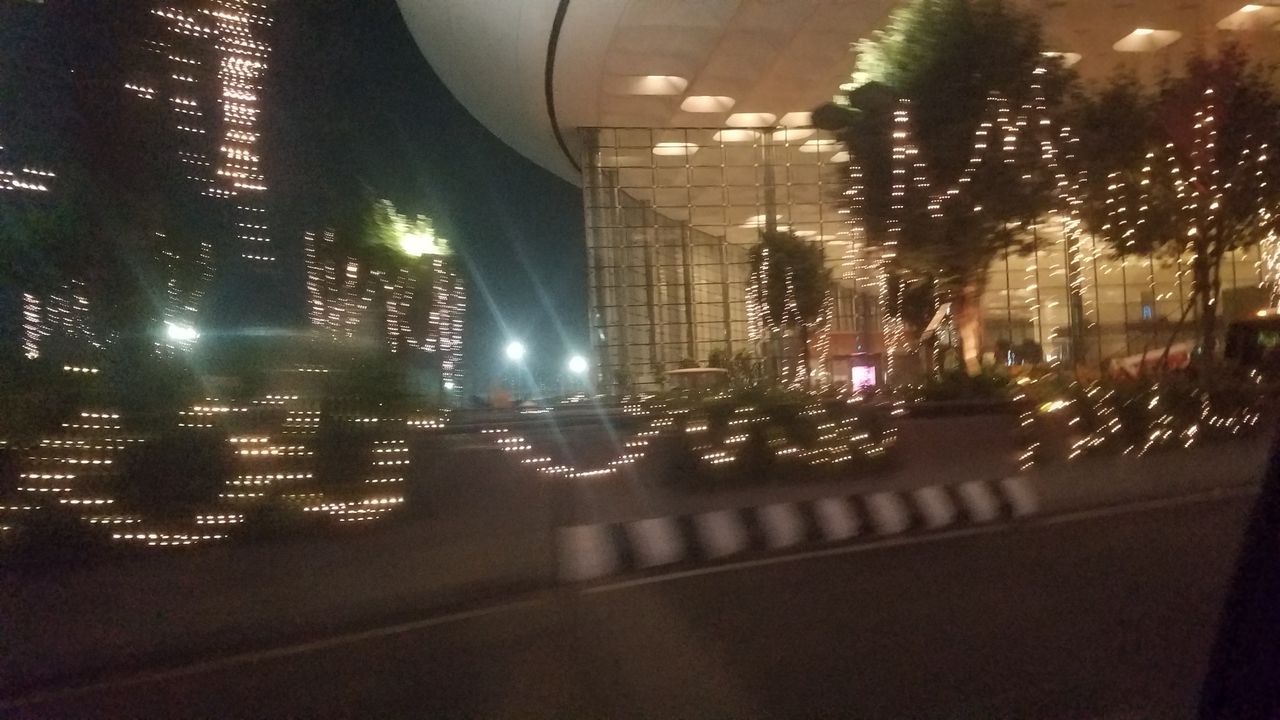 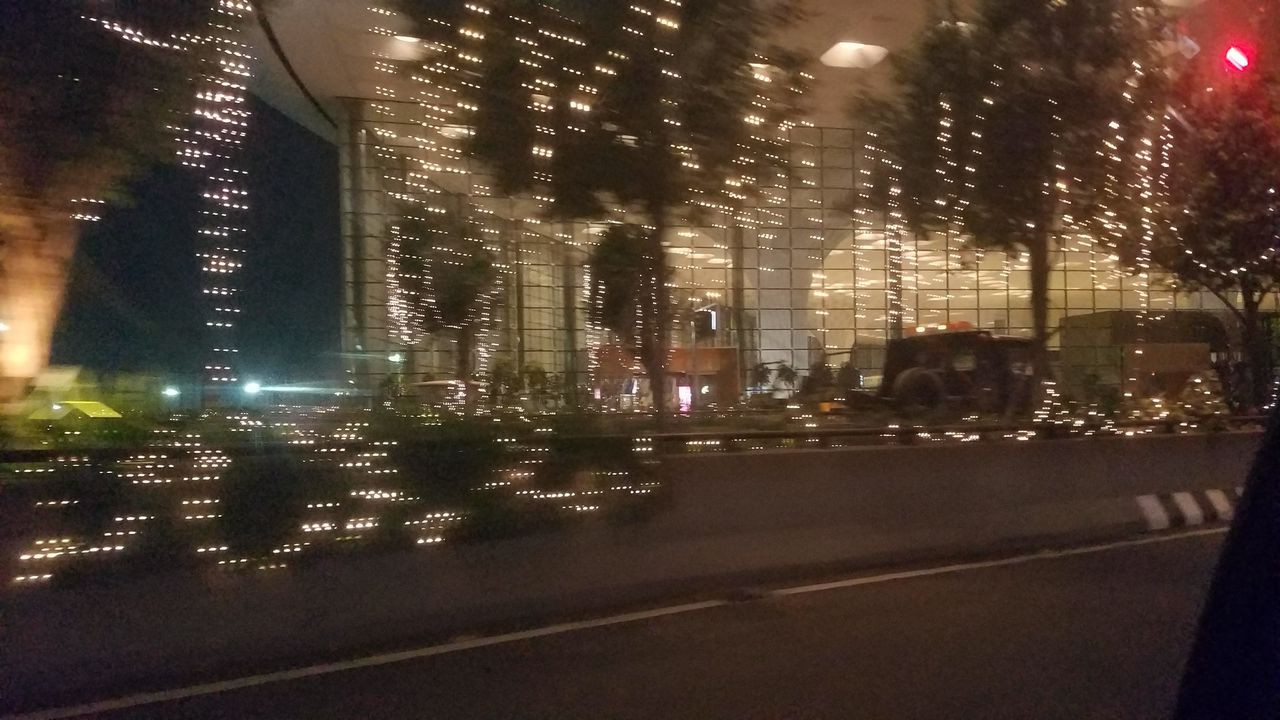 Uber ride was convenient and I was at the airport at 9.35 PM for our 12.10 AM departure to Newark 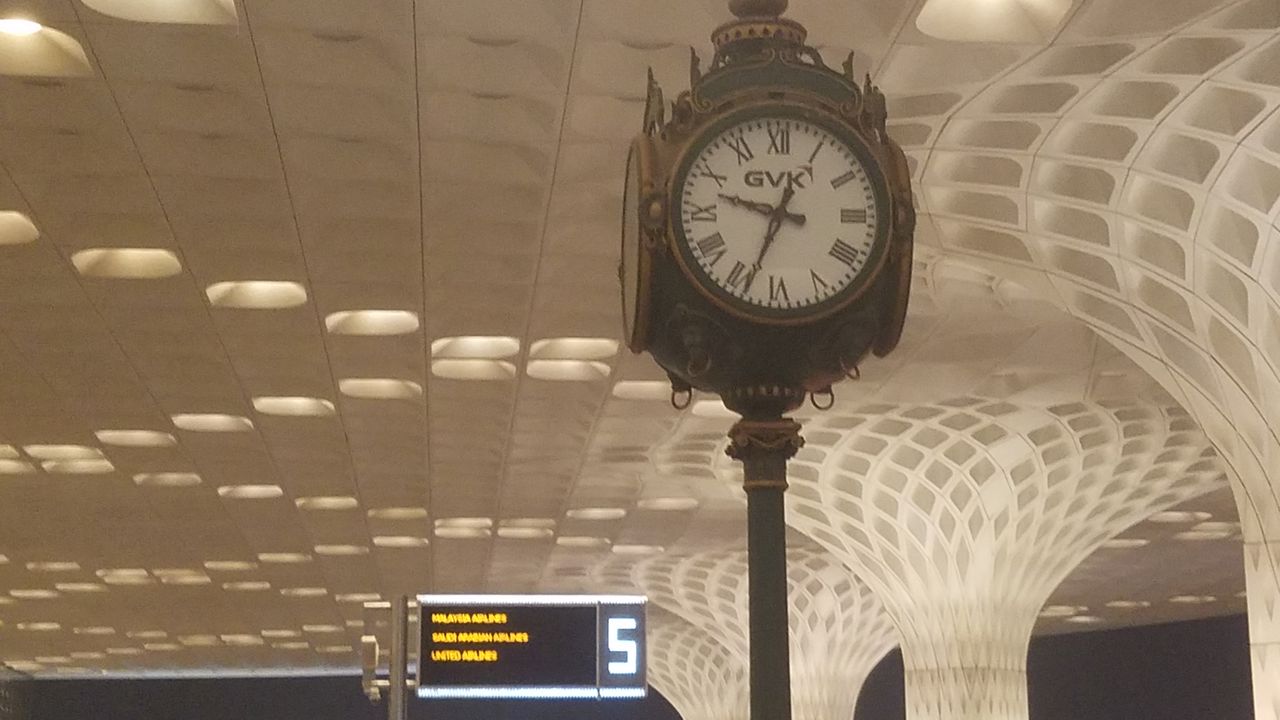 
Having lost my 1K status on Feb 1, I resigned myself to back of the loooooong check-in queue. It was about 45 people deep and I had no clue how we would make it in time given the security and immigration lines are long too. 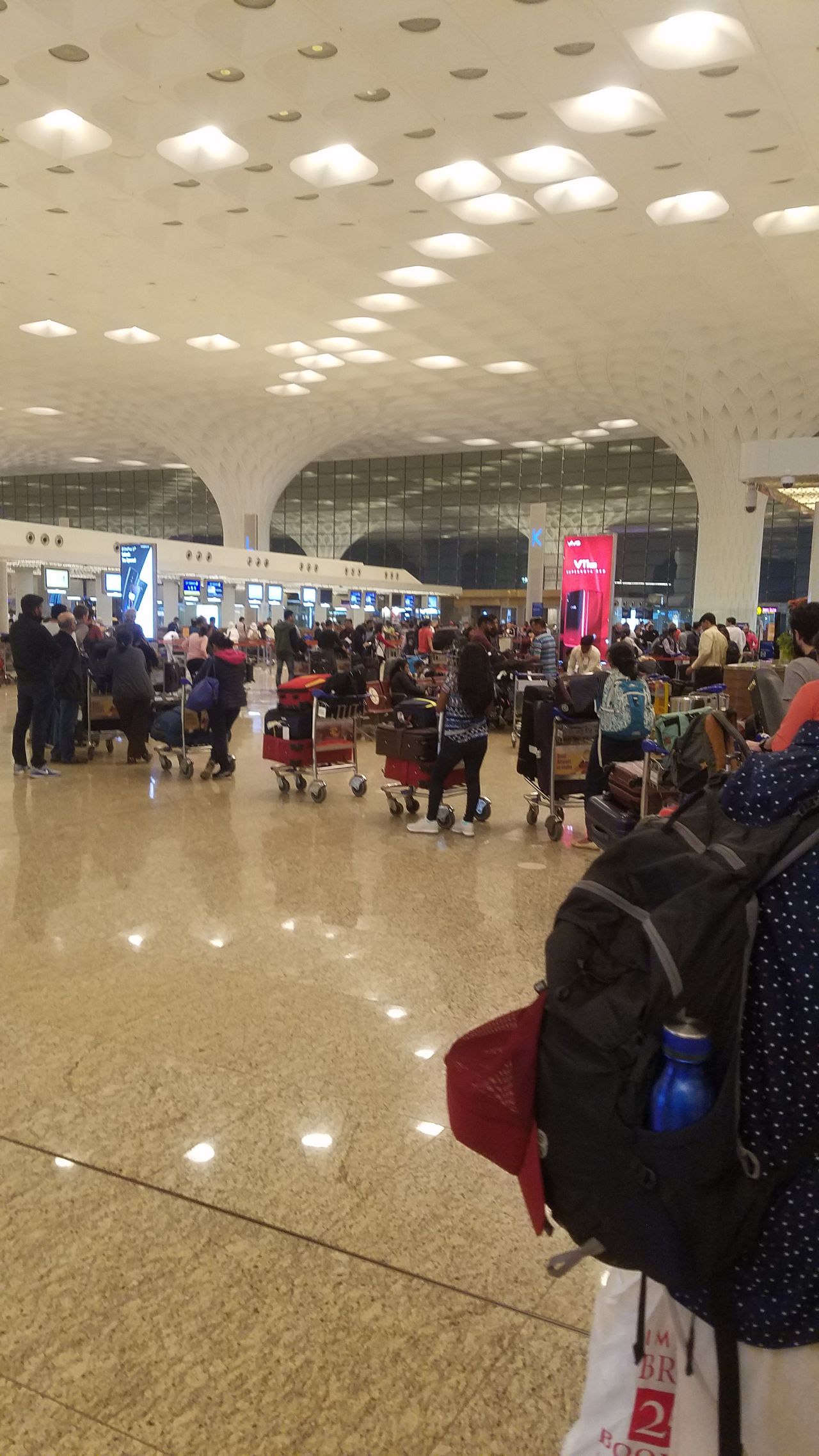 I had done OLCI, so my check-in was quick. Prior to reaching the desk, there was an agent asking some security questions. He asked to see a printout of my itinerary and I kindly asked him to see his passenger manifest that he had in hand. He already had my passport. I asked the check-in agent about the long lines and they said they are allowed only 7 desks by the airport and they were using 8 tonight. I suggested to them that they should have a bag drop line for those who have checked in online(and already completed the US APIS. I was done with check-in by 10.40 PM and now had to navigate the security and immigration lines.

some artwork after security 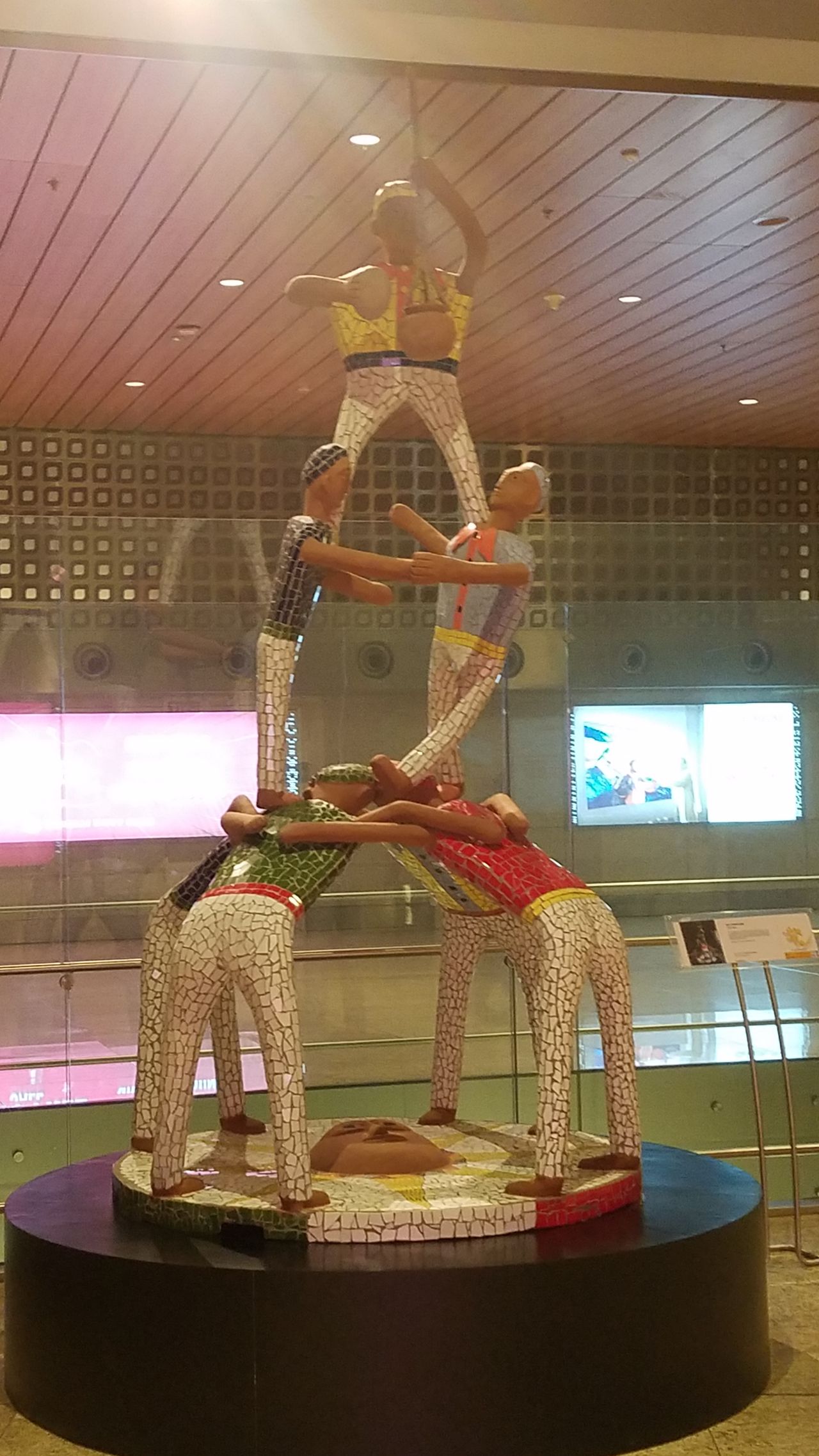 I made a quick visit to the Loyalty Lounge which has changed since I last visited in November 2018. I was directed to the space which was earlier used by the Pranaam GVK Lounge. There were still some people going one level down to the old Loyalty Lounge. I didn't have much time to explore both. The food was simple - veg and chicken biryani and one some veg and chicken curry along with 2 salads and some sandwiches. I didn't see any alcohol here.

After a quick bite - I made by way to Gate 46 - the only gate that can handle the secondary screening for US bound flights. 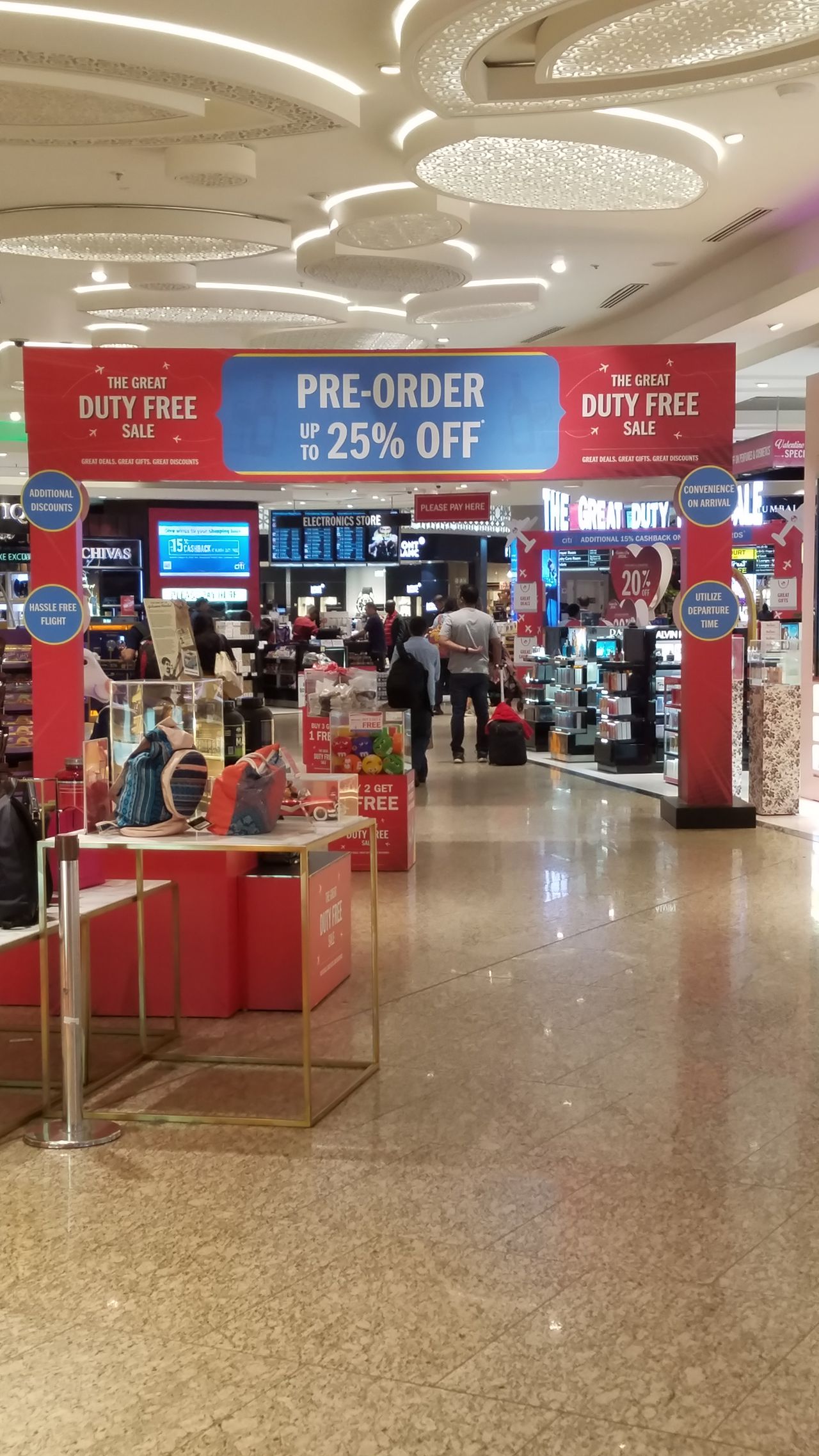 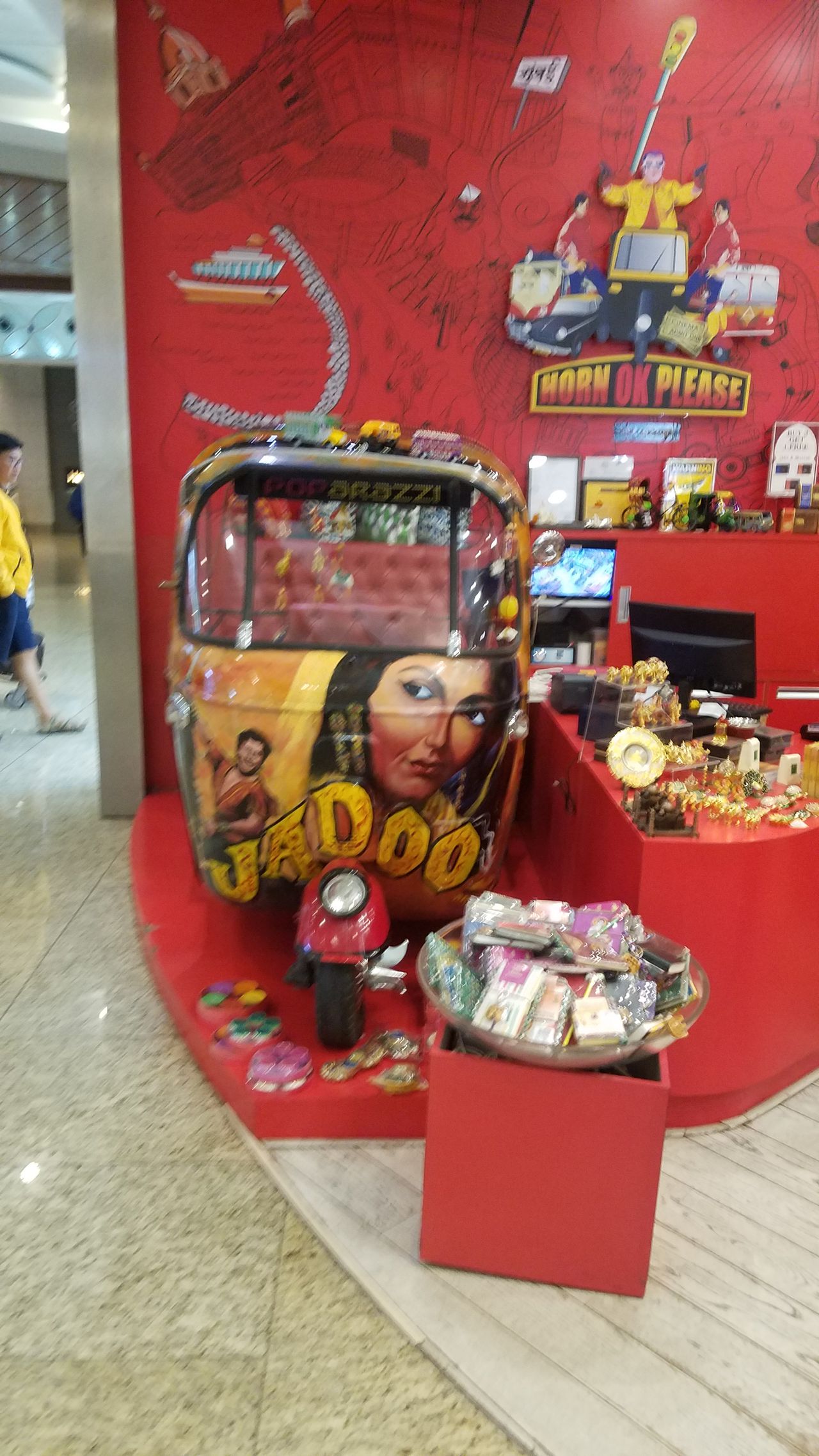 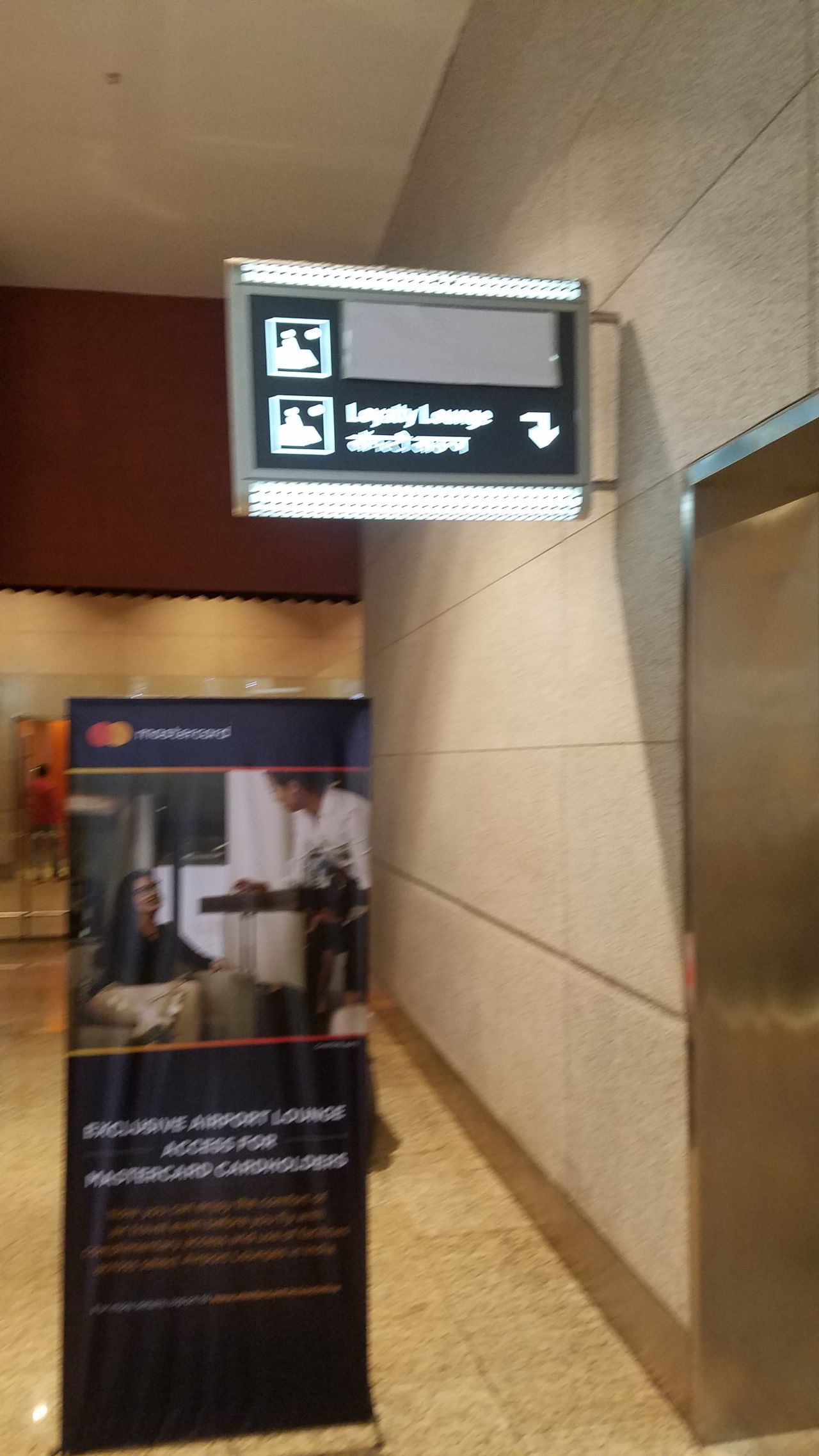 I was able to select PE seat as I was a United 1K when I had booked my ticket. It made the 16 hour ride much more comfortable given how bad the 3-4-3 economy seating is on this plane. The interior looked clean and new. I had the bulkhead aisle seat which had loads of legroom - enough for the window passenger to go over without disturbing me. All the passengers in PE knew we were lucky to be assigned a plane with PE seats and able to score the free upgrade before UA begins to charge for the PE seats from April. 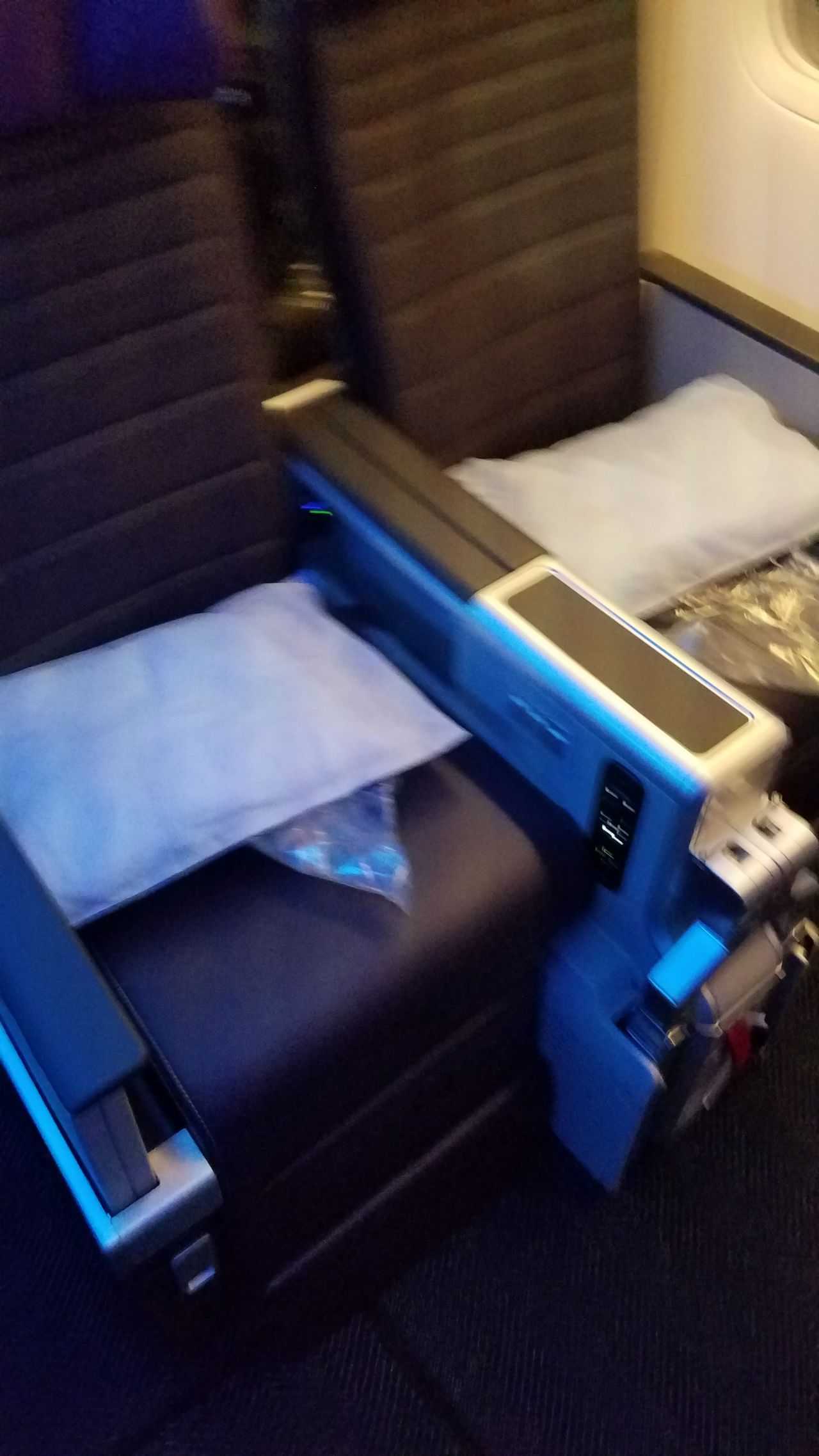 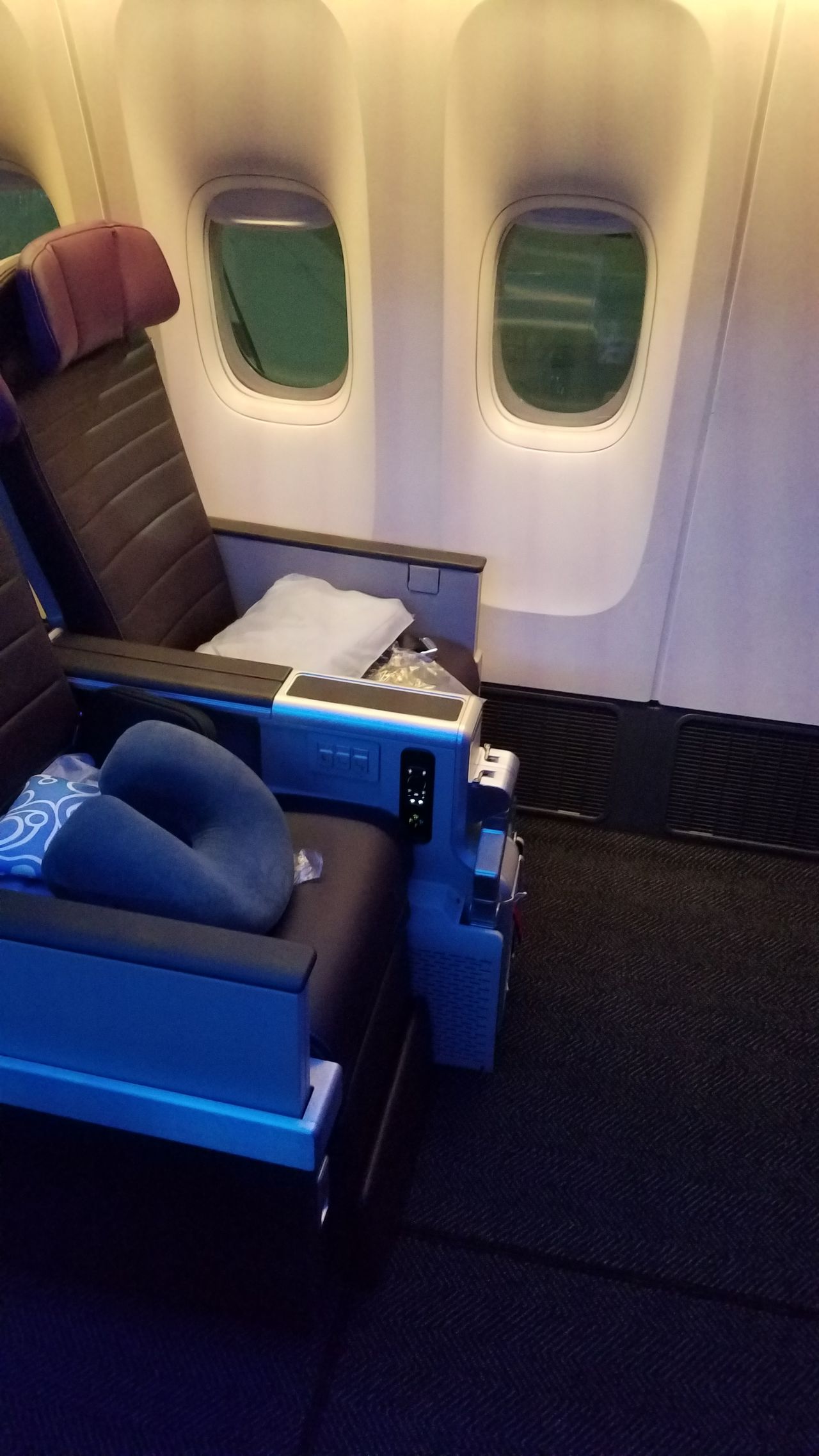 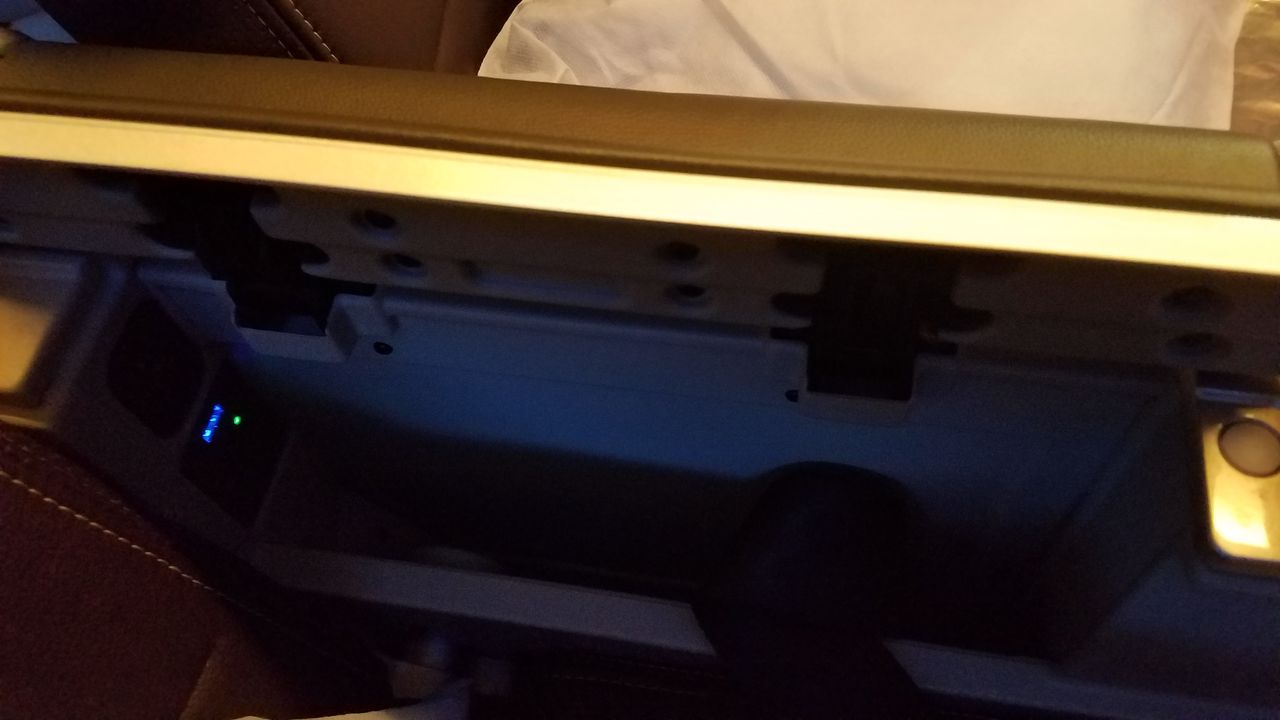 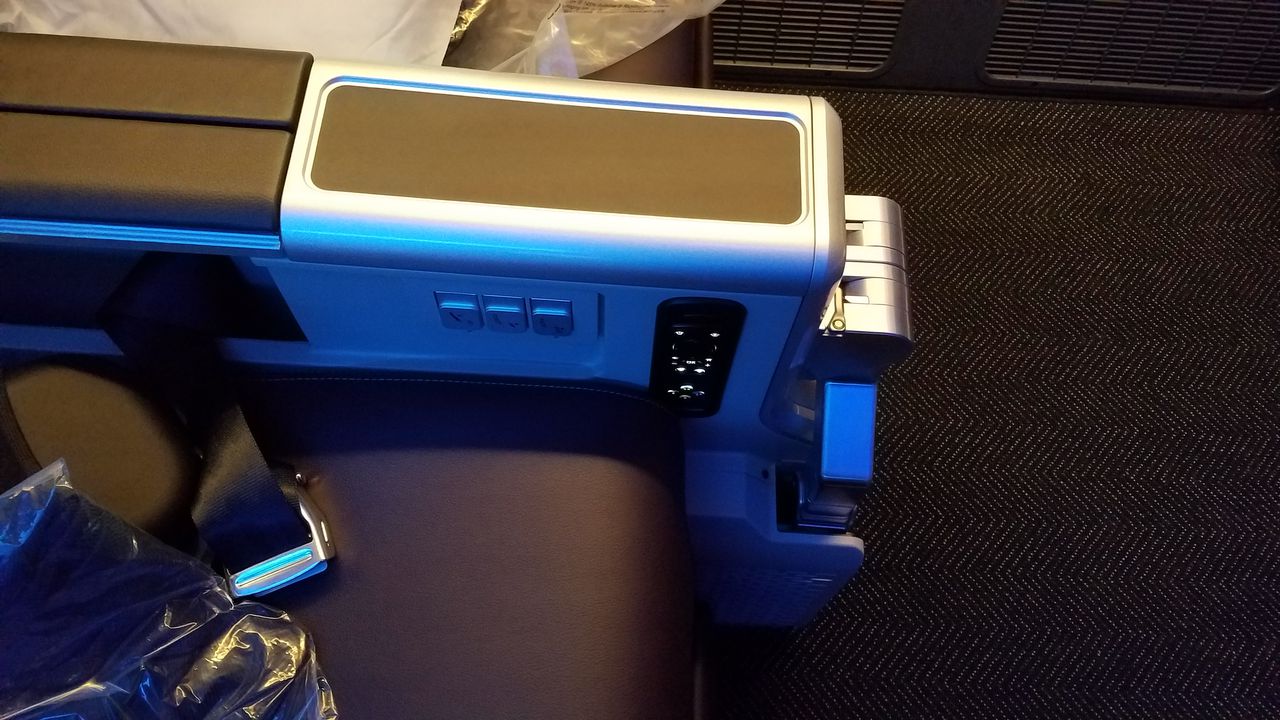 The seat controls took some time to get used to. There were 3 main buttons - 1 for recline and the other 2 to manage the footrest. There was also a button to lower the aisle side armrest - but it seemed like a useless option to have. The seat didn't seem too wide compared to the pmCO planes that used to operate on this route. There was a USB port, individual power and audio ports under the armrest which could be flipped up. for easy access. There was some storage space under the armrest for simple things line phone or ipad. Overall the seat was a decent upgrade compared to the dense seating in regular coach

Dinner was served soon after takeoff - veg or chicken with vegetables. I opted for the Veg meal which was some creamy paneer dish with white rice. After dinner service, we were given one small potato sandwich and a small chocolate to have during the flight. Dessert was a small tub of Kheer. Soon after dinner, I put on my eyeshades and ear plugs and slept.

I(and almost everyone in Premium Economy) were woken up about 6 hours later by a family of 4 that were split between business and PE and they gathered in the middle of the night speaking loudly. They were rotating amongst themselves between business and PE. I made a trip to the back galley. They had tea, coffee, juice and water available. I got some tea and saw a movie. With 4 hours still remaining, I managed to sleep for another 2 hours and then woke up for the breakfast service.

Breakfast was either eggs or veg. Veg was south indian - 2 small uttapa's with a medu vada sambar, muffin, plain yogurt(why would they give a plain yogurt with an south indian breakfast!) and some fruits.

Soon we were in Newark with a busy immigration hall. It was good to land on President's Day Holiday - there was no traffic on the turnpike and I made it to NYC in 20 minutes.
See more

Overall - the seat was pleasant with great leg room. It's not something I would buy up to though. In fact, after this trip I will avoid the nonstop on United 773's in coach.
The 3-4-3 are super dense and unpleasant for 16 hour journeys. I think United missed a great opportunity to fit better seats. I prefer BA's new WTP seats to these.
I found the incline was not that great and it gacve me lower back pain after few hours.

Trojans is member of Flight-Report since August 2016.

He wrote 6 reviews about 3 airlines and 7 airports.