#55 out of 72 Airlines A minimum of 10 flight-reports within the past two years is required to appear in the rankings. 48 reviews

2021, was also another challenging year. But for other reasons. Now it's time to start again all the activities which were reduced the last year. Espacially for the summer ! Now more borders are open, it's much more easier to travel. Following my  sabbatical year, it's time to start a new job. So I decided to take some break, and I decided to visite a friend who was unable to visit me, so I made the choise to visit my friend. To do so, I took a special flight, a Swiss flight operated by Helvetic Airways onboard an Embraer E190-E2, a new aircraft type, and new airlines for me.

The route is opertated by several type with LX, espacially A220. And sometime, Helvetic this route with their new Embraer E190-E2. Helvetic Airways, is a small airlines from Swizerland. It operates E190, E190-E2 and E195-E2. Some of these planes are still parked in Zurich, waiting a better time to fly, but some of the planes are flying from Basel airport. 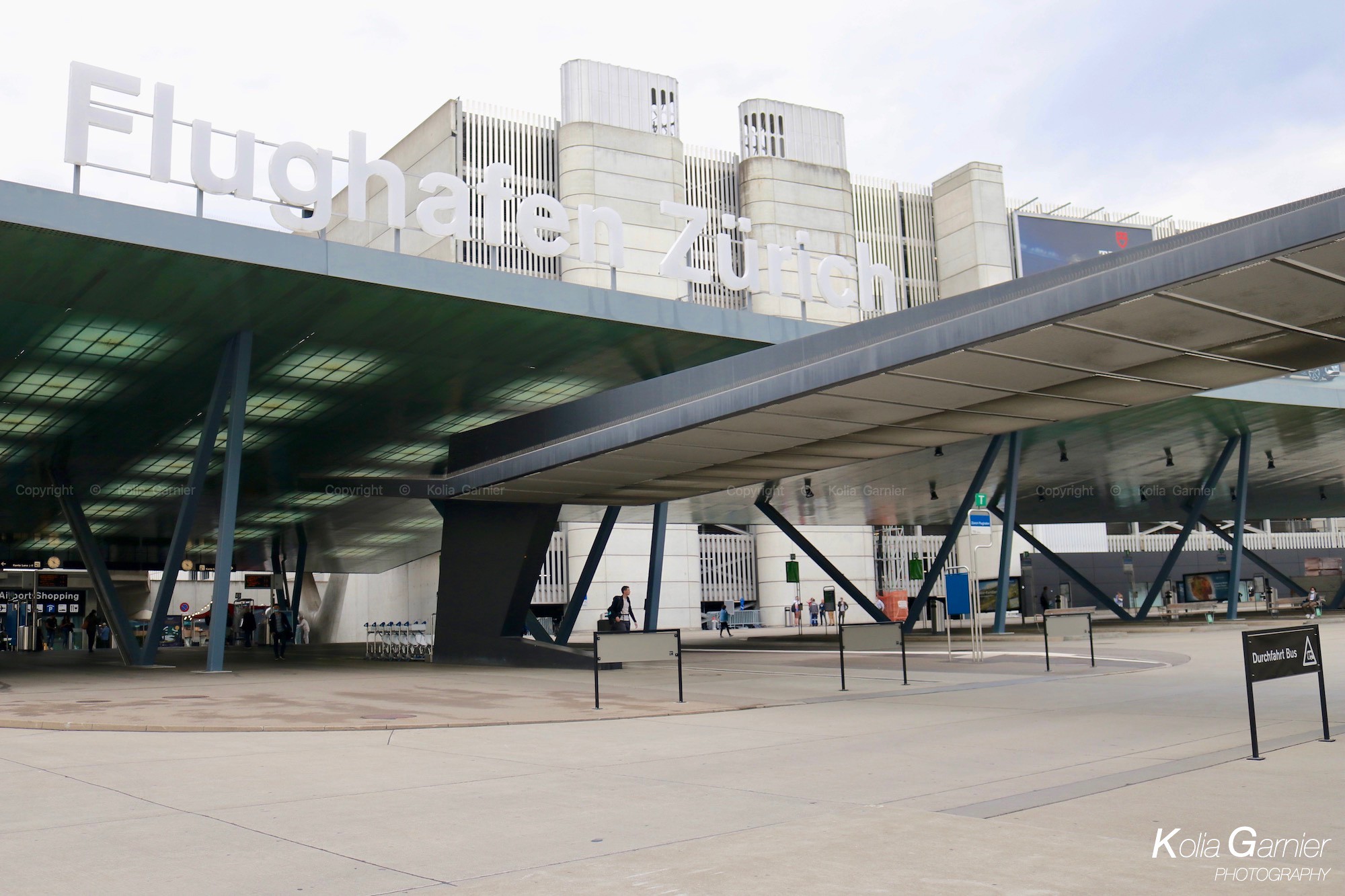 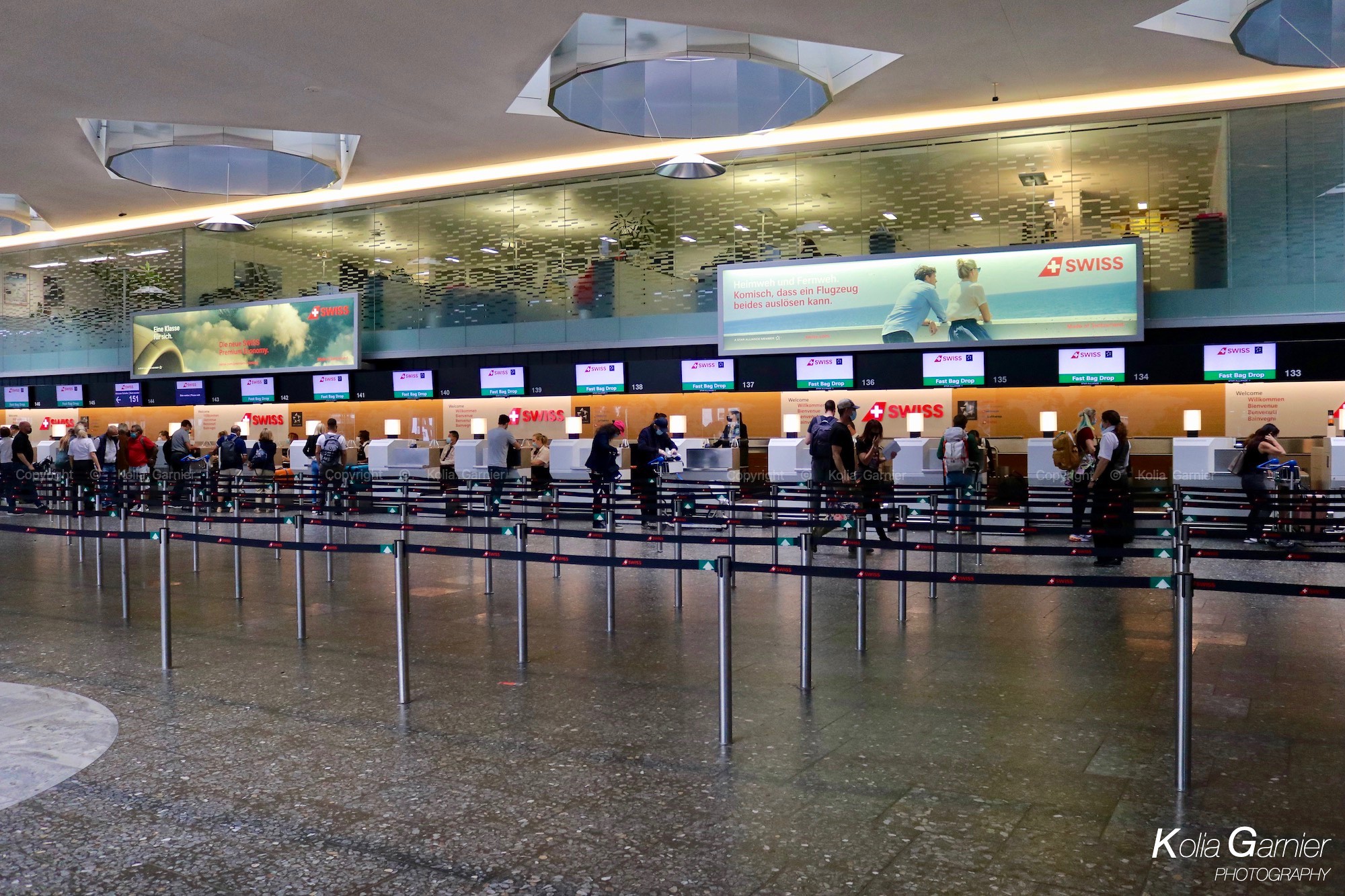 I arrived earlier this morning, the airport, was not so crowded. When I arrived, the lady at the counter printed me my boarding pass and checked my bags. Then I walked though the security, and went to the gate. Unfortunatly the observation gate was closed, maybe that was due of the Covid, no information was written. Hopefully, arround the gates area there are nice plane where to observe the planes. I took few minutes to walk thought the terminal, until it was the time to go to the gate. 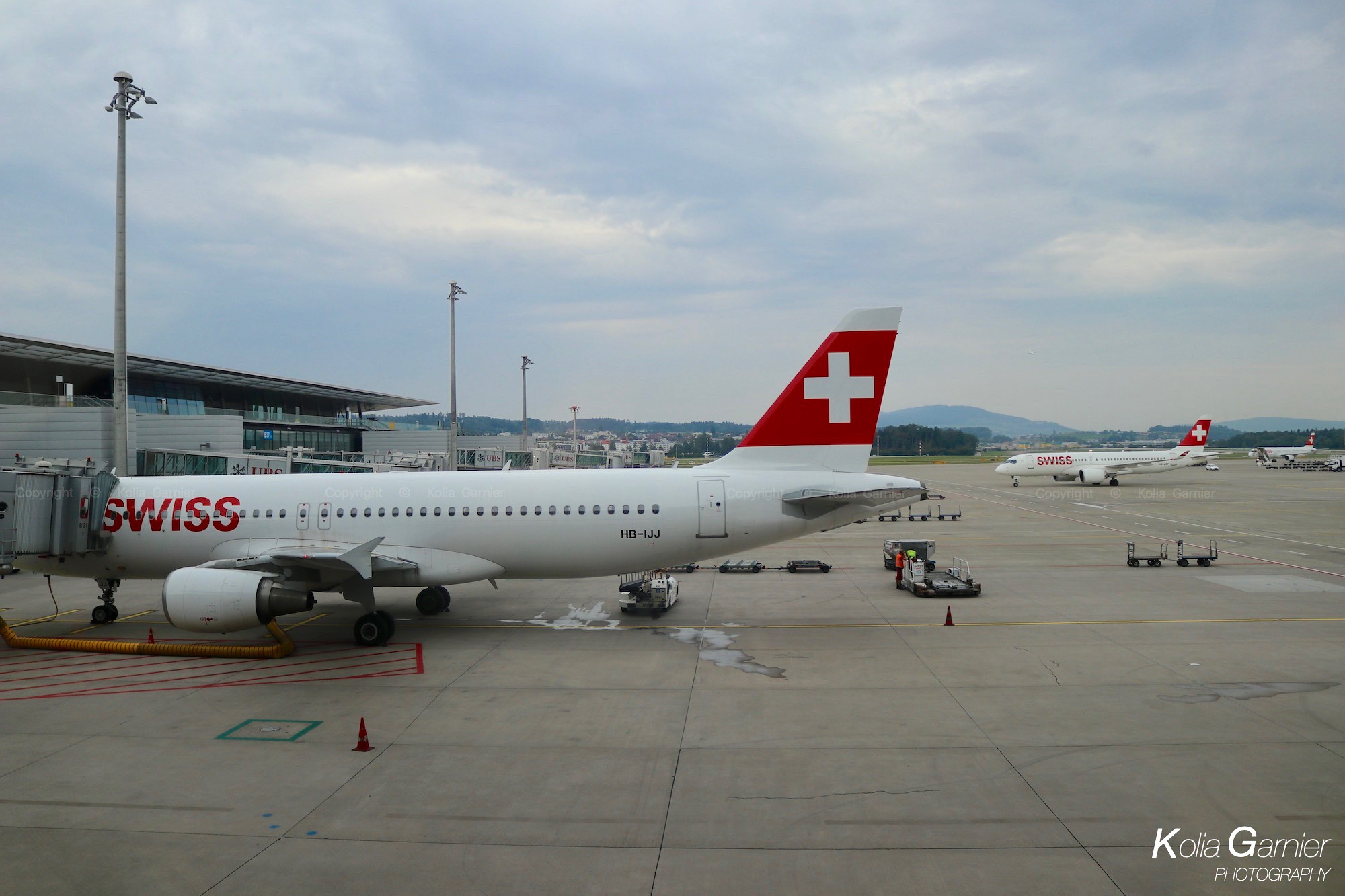 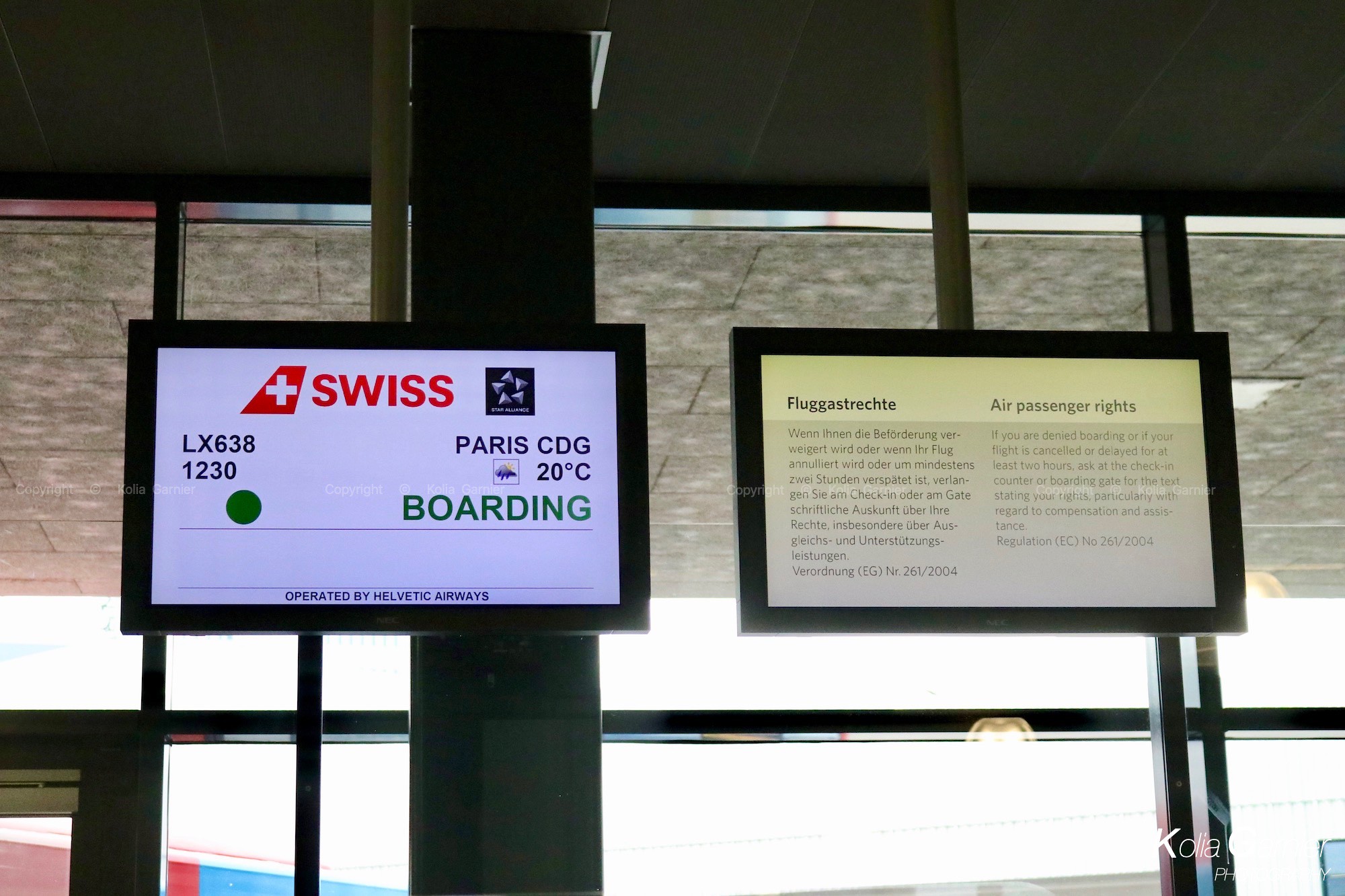 Our gate was on the lower floor, this was meaning that our plane was on a remote parking. When I arrived to the gate, the boarding has already started. I took a place into the queue, and we board into a bus. The crew was carefull to no board too many people into the bus. I would admit that it was more comfortable. Then the journey to join the plane was no so long, As I was in the front of the bus I had a nice view about the apron, and the planes around us. Here some of the E195-E2, which are parked during this time. I hope to be able to fly one °-) 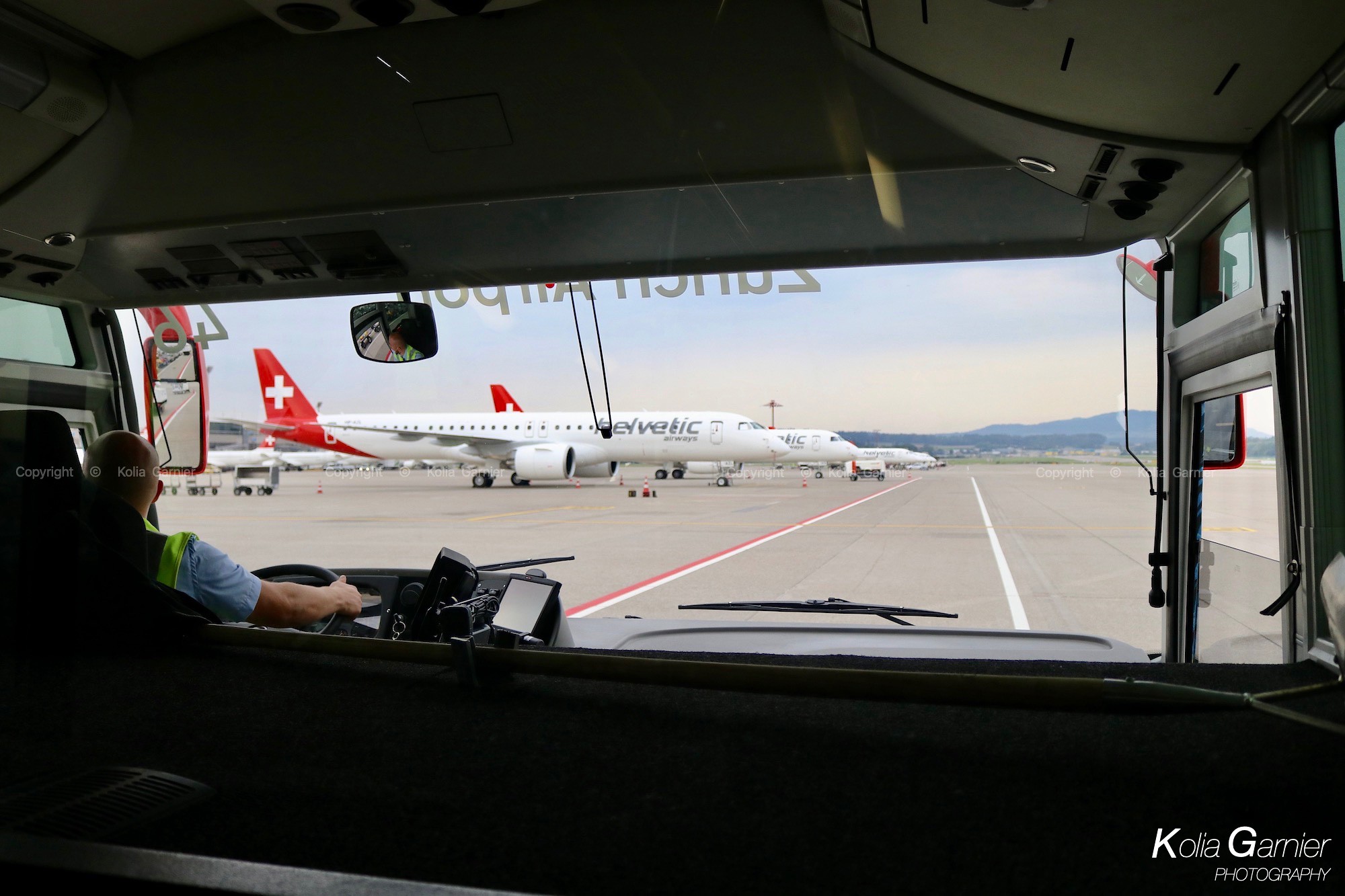 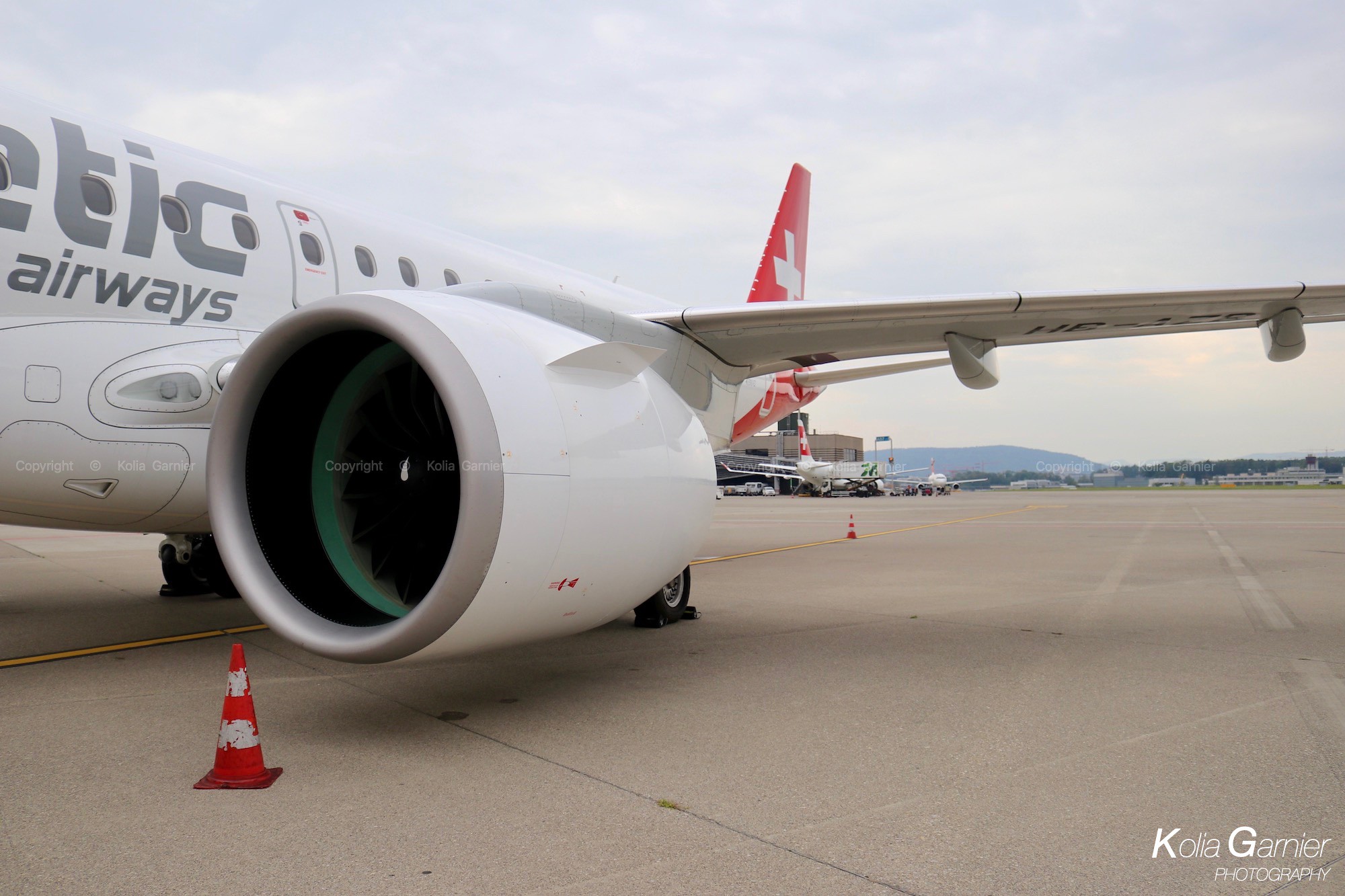 We arrived next the plane that we will fly today. I will be a Embraer E190-E2, the 195-E2 has two exit over the wings. The boarding was quick and efficient, even gere the ground crew welcomed me to take pictures of this new plane. That's nice from them, especially that they care about the planes they see every day. Once I was onboard, I was welcomed by a stewardess, the rest of the crew was at the back of the plane. Then I arrived to my seat. Let's explore it. 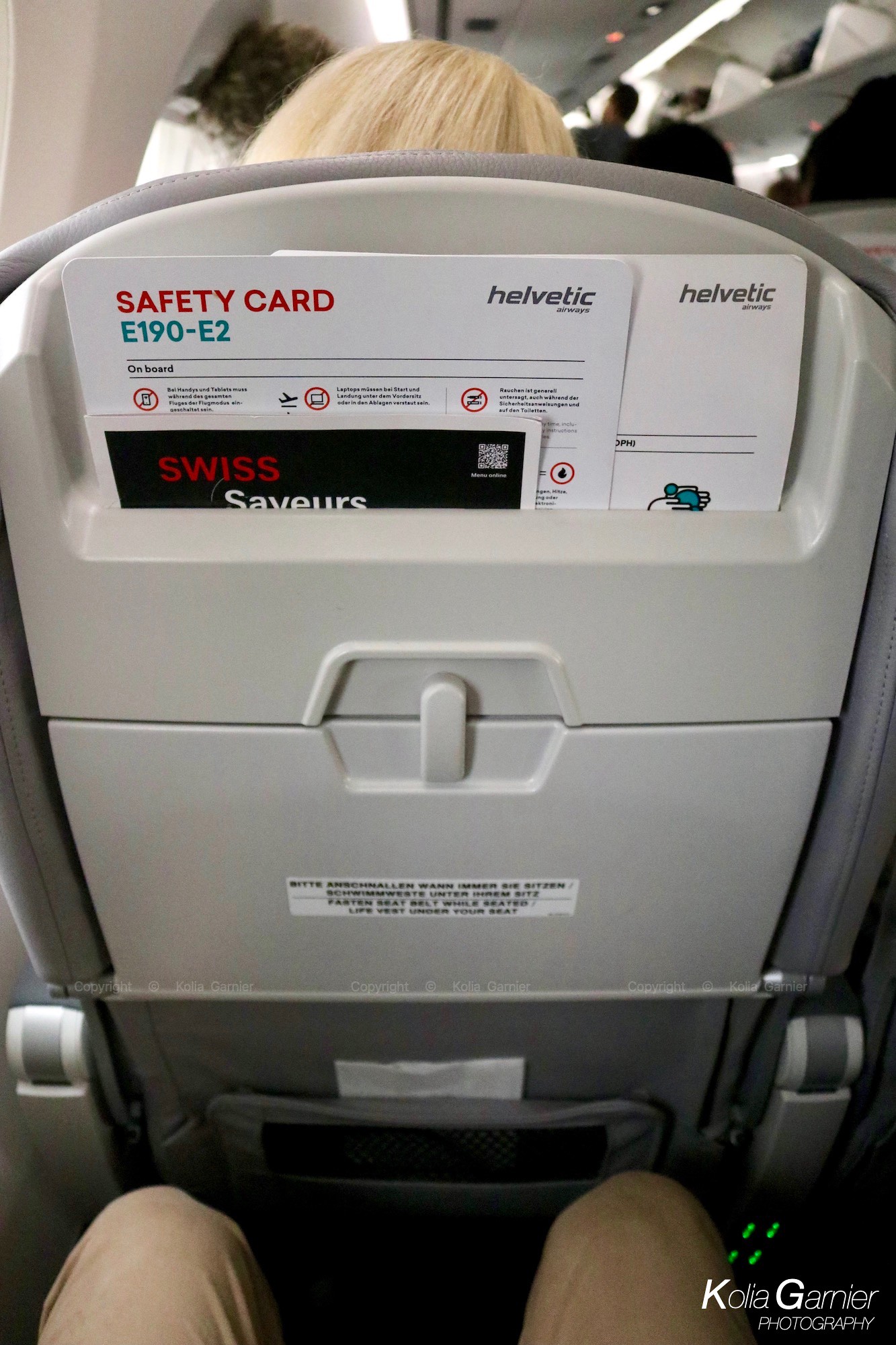 The seat was comfortable, withe large portholes, but the pitch was quiet small, hopefully the flight won't be long. I won't imagine for tall people, and longer flights. When I was looking into the porthole, there was many planes from Swiss, we know where we are. Once the boarding was completed, the safety demonstration were done, and we started to taxi to the take off runway. I would admit, that's it's enjoyable to be on a new plane… BUT it was a bit loudy when he was accelerating… Anyway. 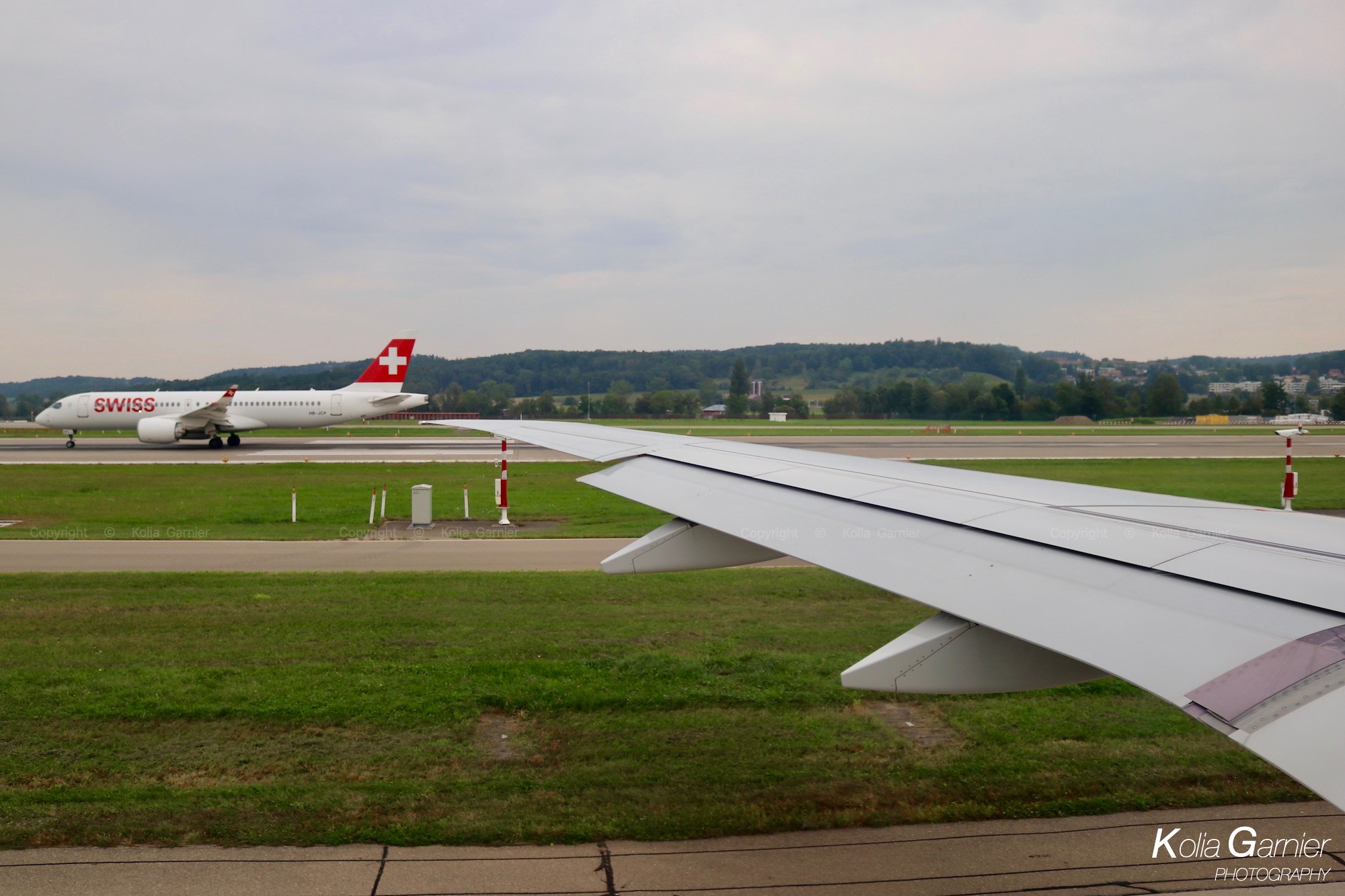 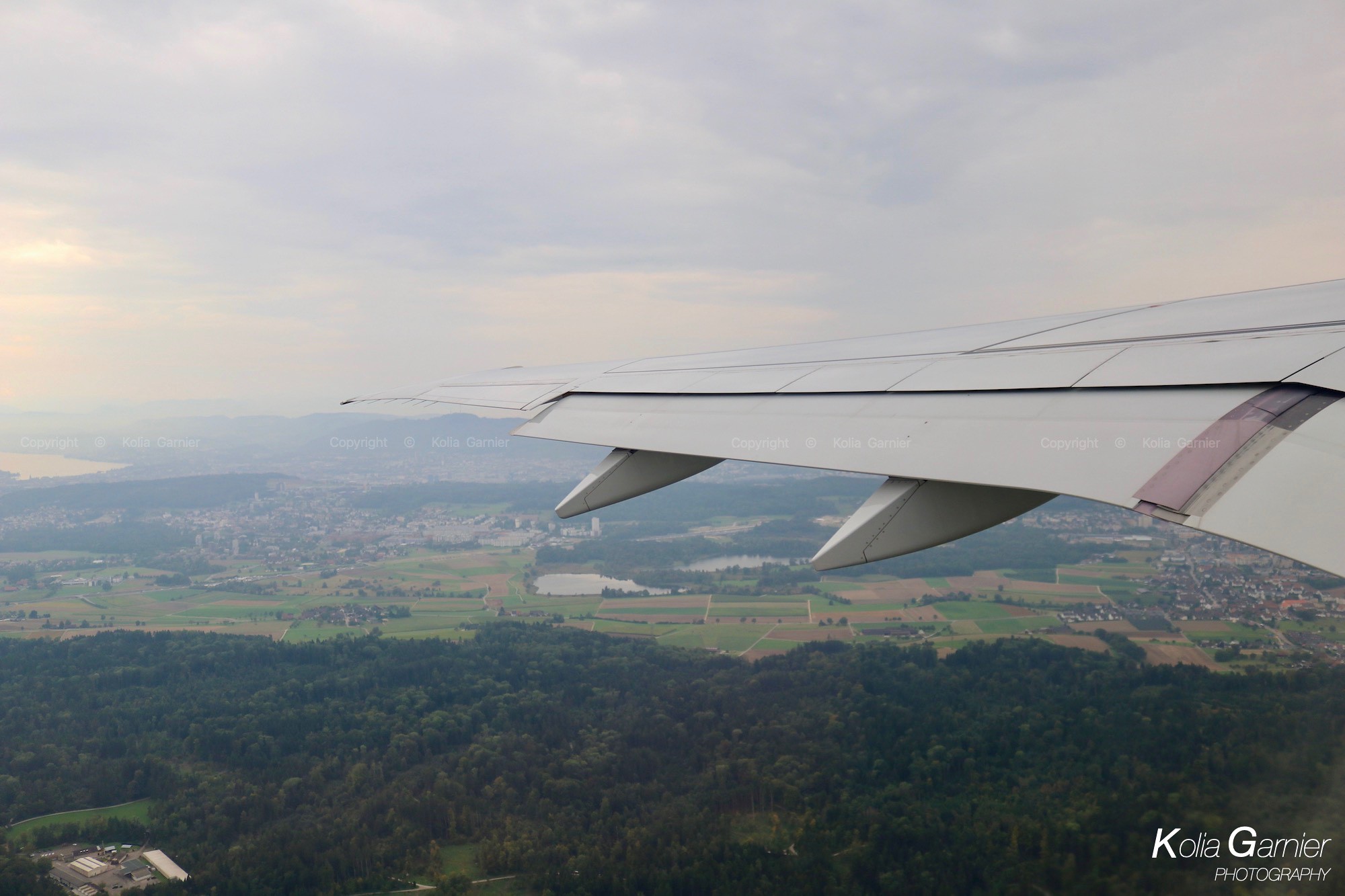 The taxi before to arrive to the take off runway was not so long, then we wait behind a A220 before it was our turn. Take off was smooth, and during our climb we were able to see Zurich (on the left in the picture). After we reach the clouds level, the service started. The crew gave us a form to fill up. Here what were the articles linked to the actual situation : the form, the precautions card, and a desinfection bag. Then it was time to go to toilets. 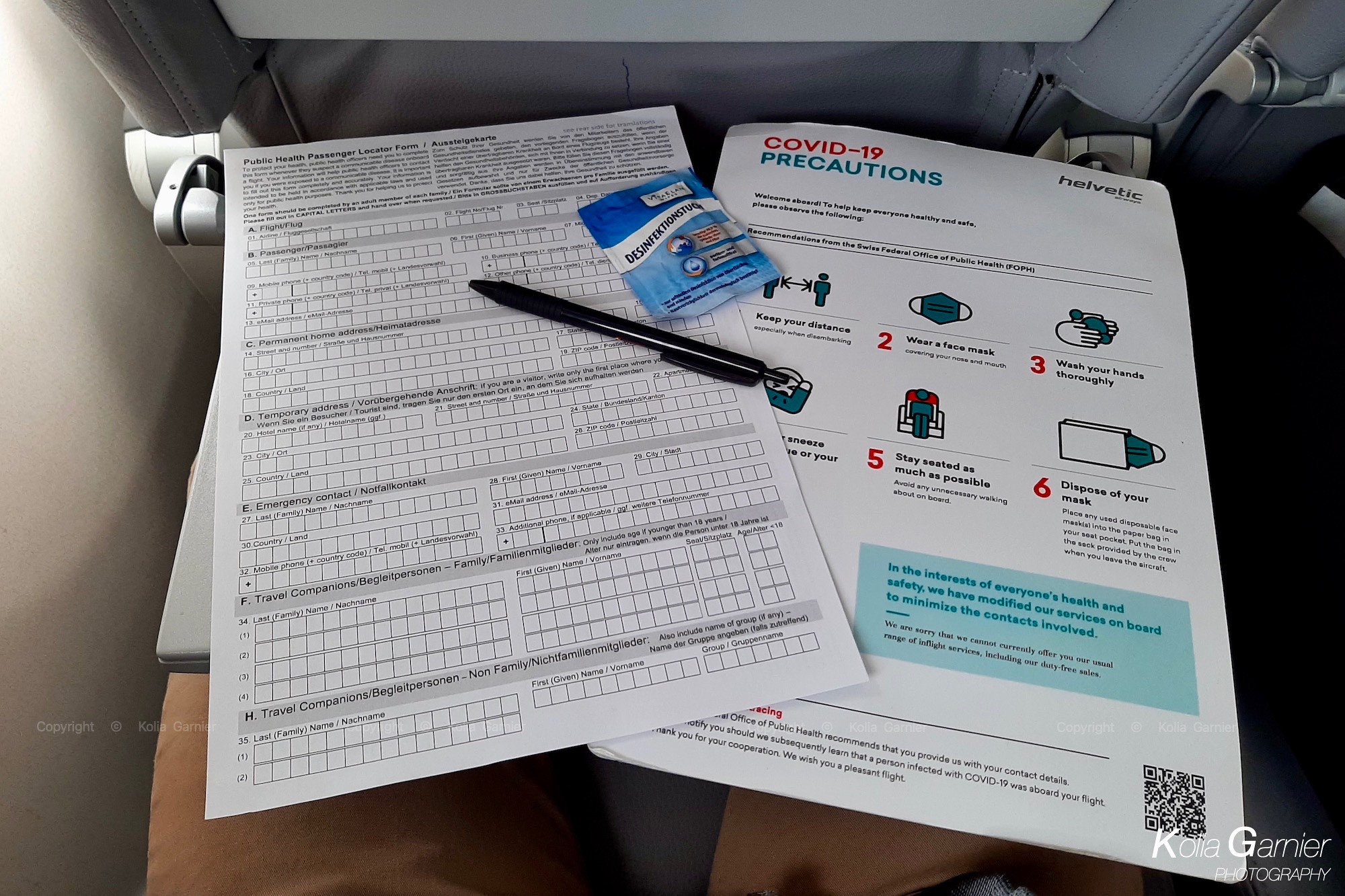 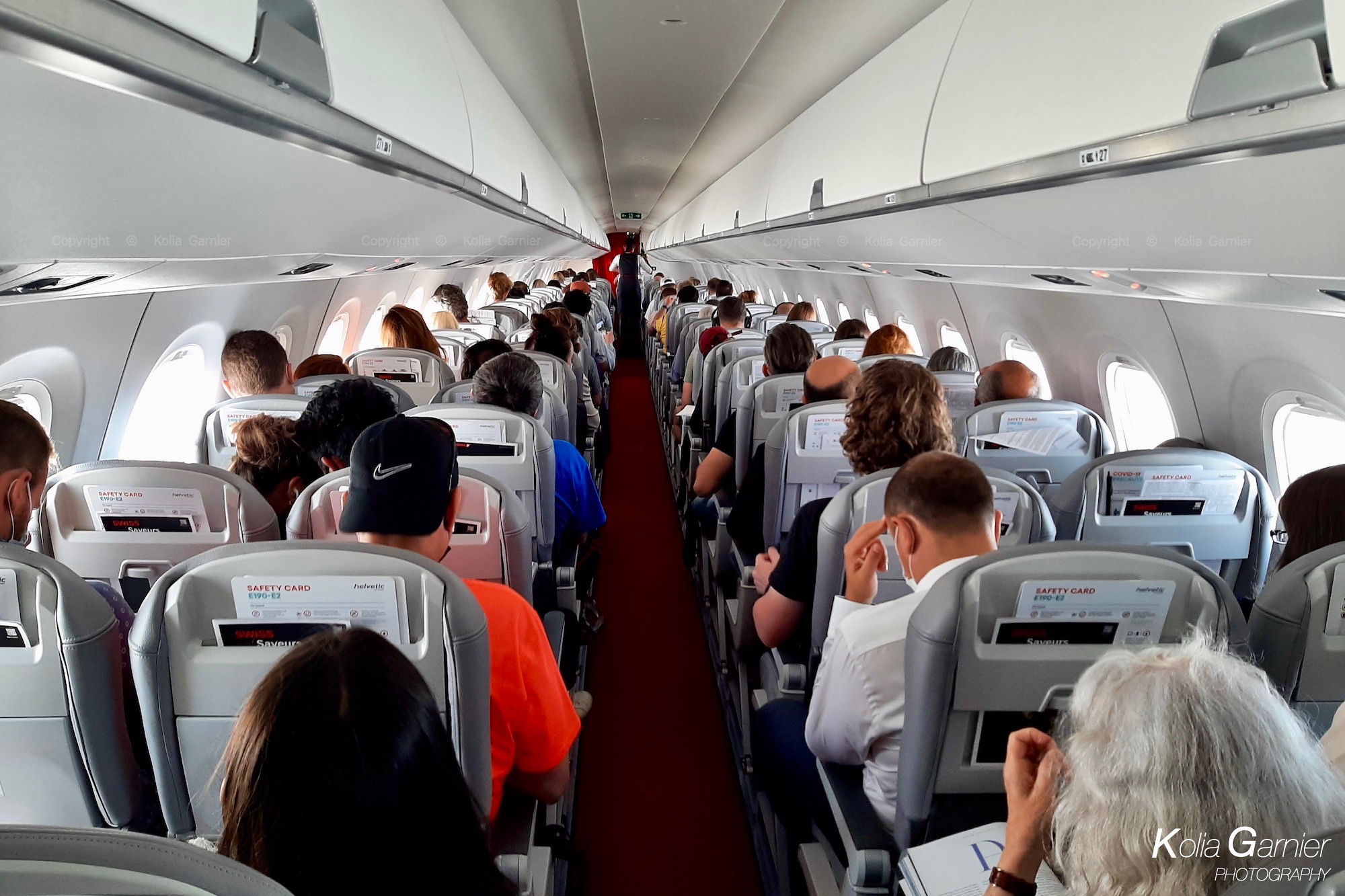 Here a view from the back of the plane, the cabin was looking bright, and I would admit, that's more comfortable for the eyes, and it's enjoyable. The I went back to my seat, and the service, start… If we can call this "a service". We received a single water bottle, and that's all. It remind me an other airline °-° . If we were willing something, it was on purchase, from the Swiss Saveur book. Here was we found into the seat pocket, the safety card, the sickness bag, and the Swiss Savour liflet. No more Inflight Mag. 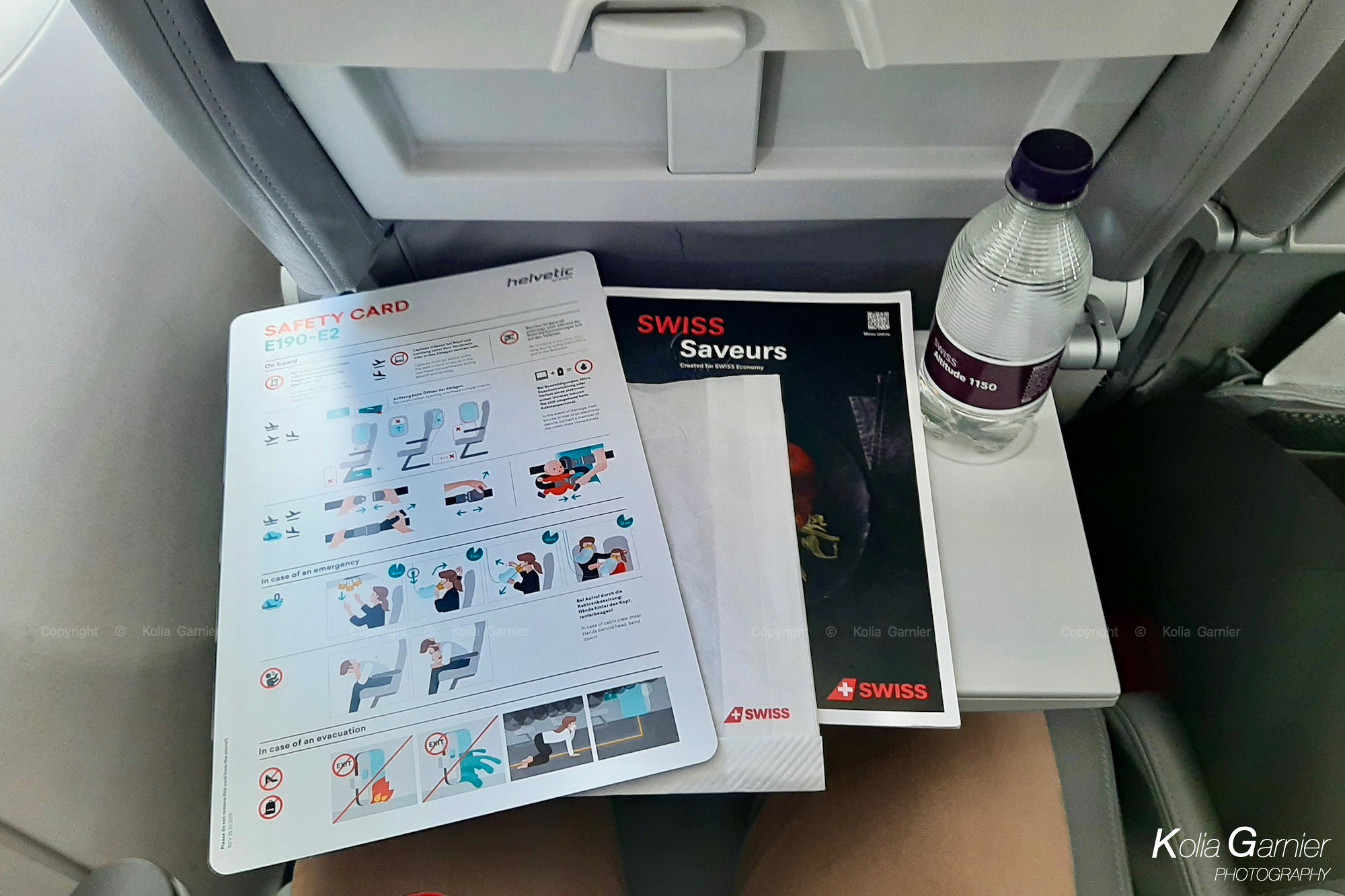 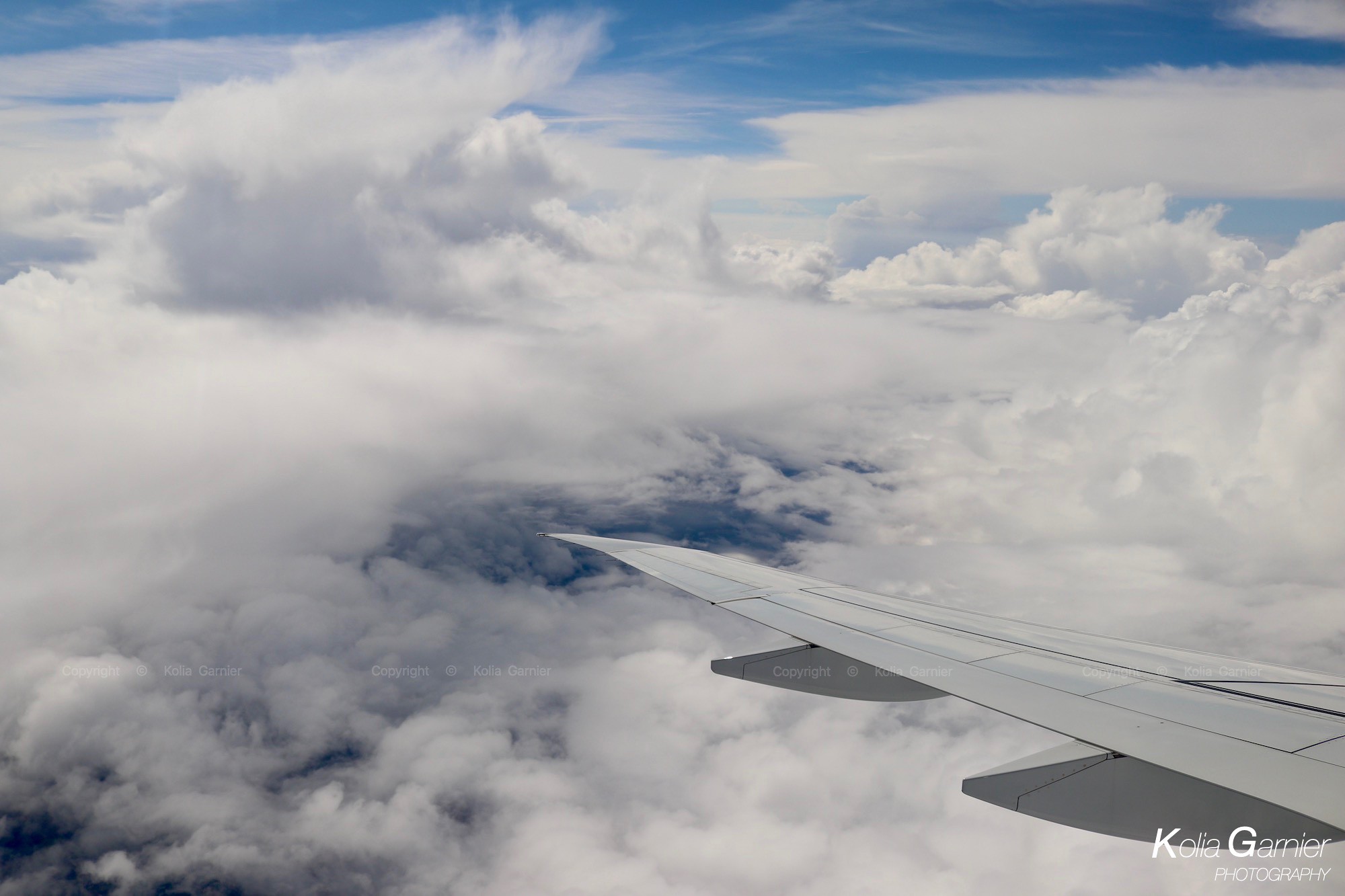 Few minutes after I finished to fill up the from, the crew made a first pass to take back the paper, a second one to offer the famous Swiss chocolate and finally a third and last pass to pick up the last trash because we started our decent to Paris. The sky was more cloudy. Durign the decent we had some turbulence due of the weather, which was between storm and rain. The seatbelt sign was switch on, and a last cabin check was made before flying thought the biggest part of the clouds. 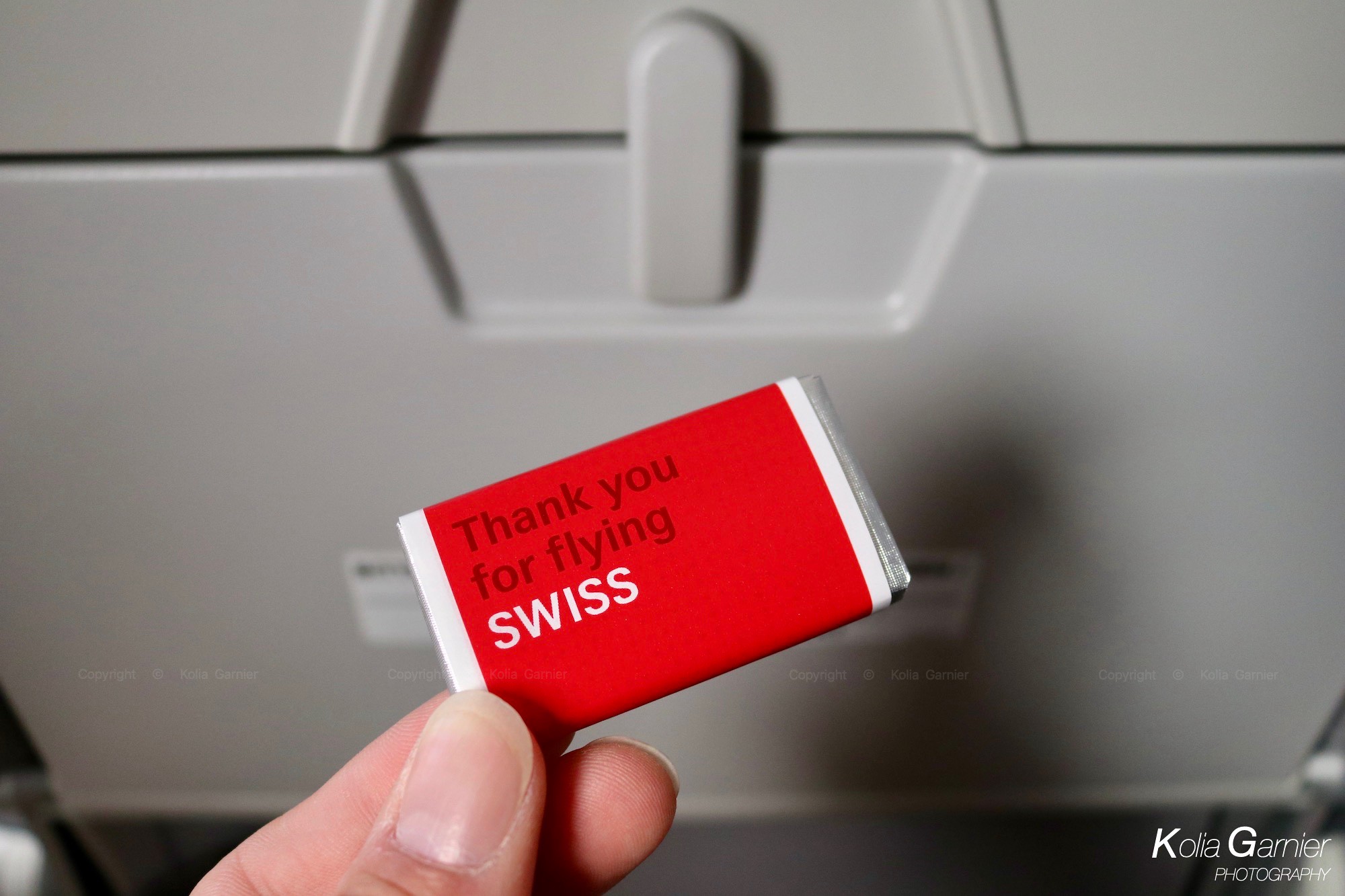 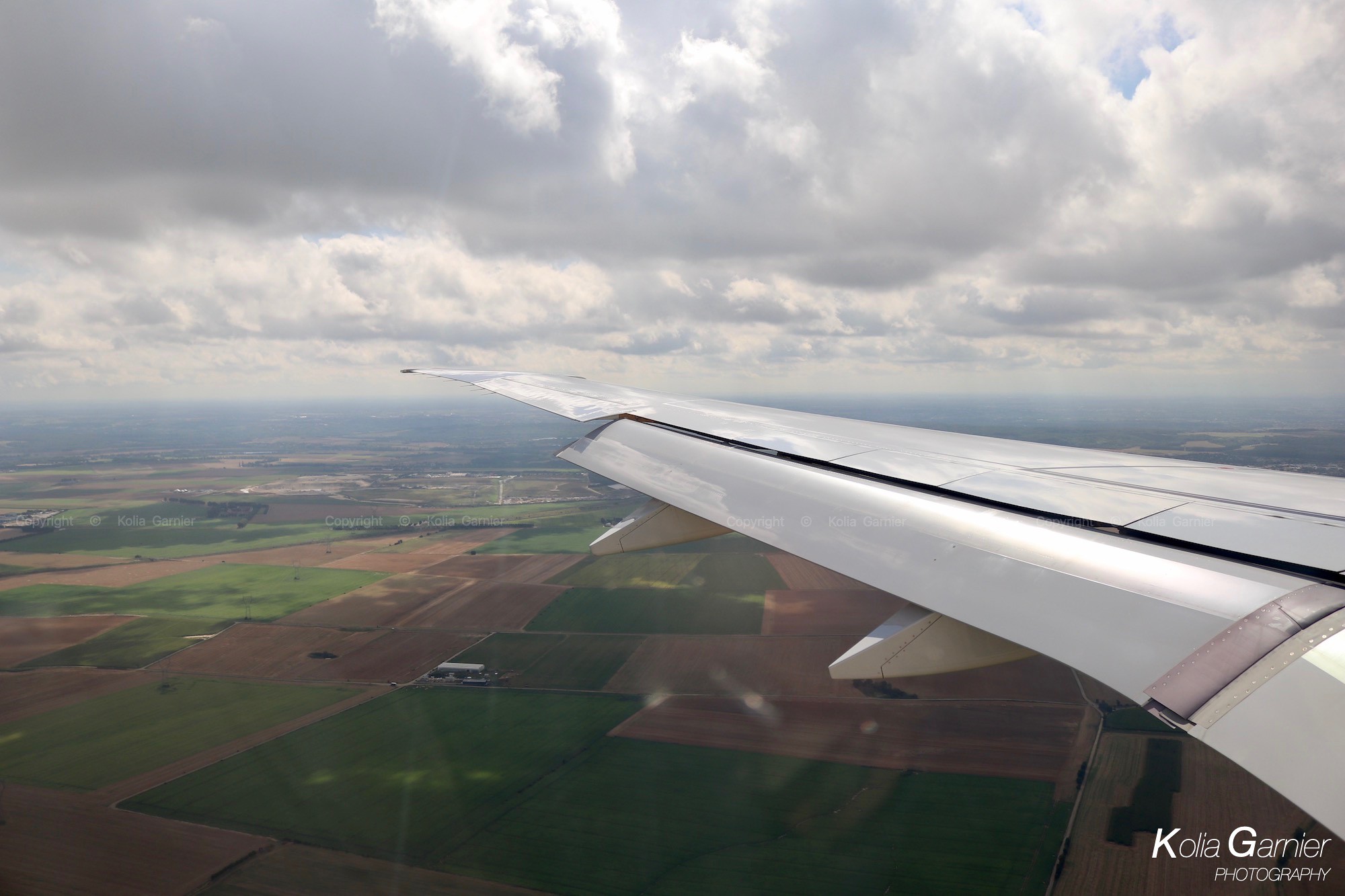 Once we were out of the clouds it was much more better, but still quiet windy. When the gears were extended, it was very loud… It surprised me… I'm not use to have a such big noise… Even with Airbus it's not as loud as this one. The touch down was a bit hard, and as you can see, the clouds were begining to be a bit more dark. The plane slow down and turned to the next taxiway. 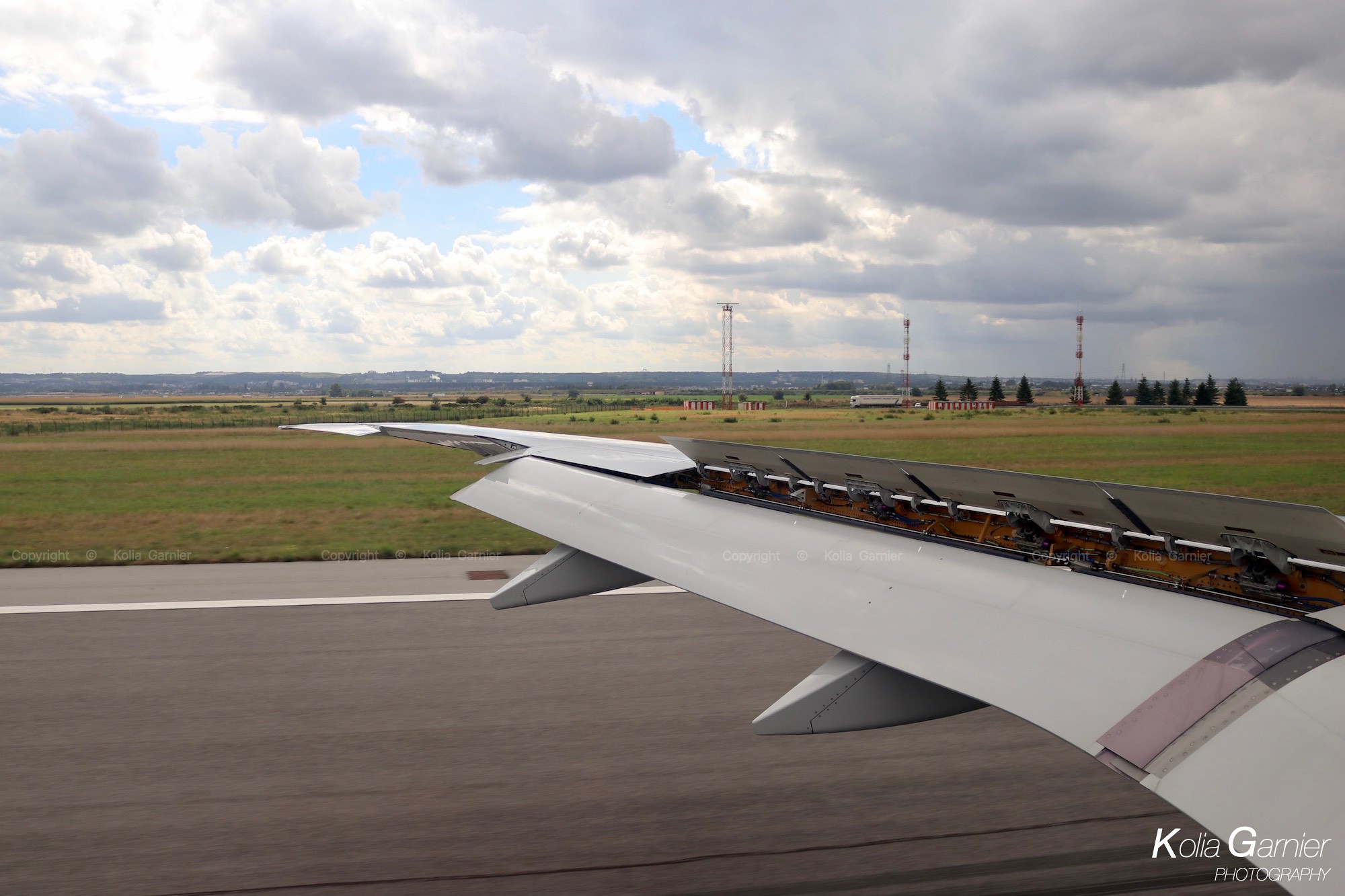 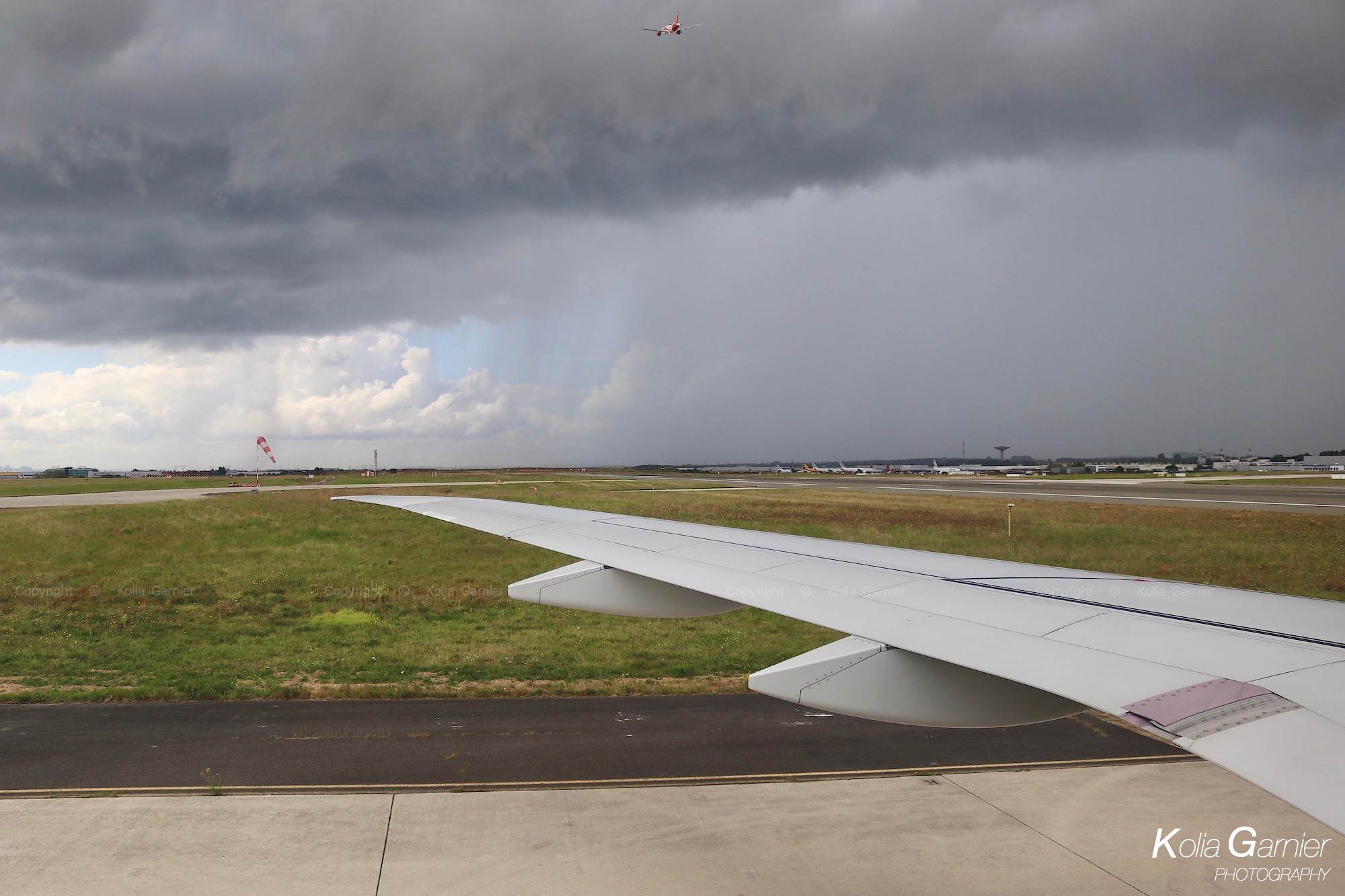 Here the big dark cloud… The planes which were taking off, were all turning to the left to avoid it… If you look closer, you can see the water falling down the cloud, and the "water wall" moving forward, straight to us. The taxi was not so long, and we parked to the 2D. Once we were parked, all passengers were leaving the plane row by row. Then I went to thanks the crew for this flight, and talked with them about my impressions about this flight, the service, and my sensations about this new plane. They were agree, and happy about what I was thinking and told me that some passengers and crews were having the same feeling. 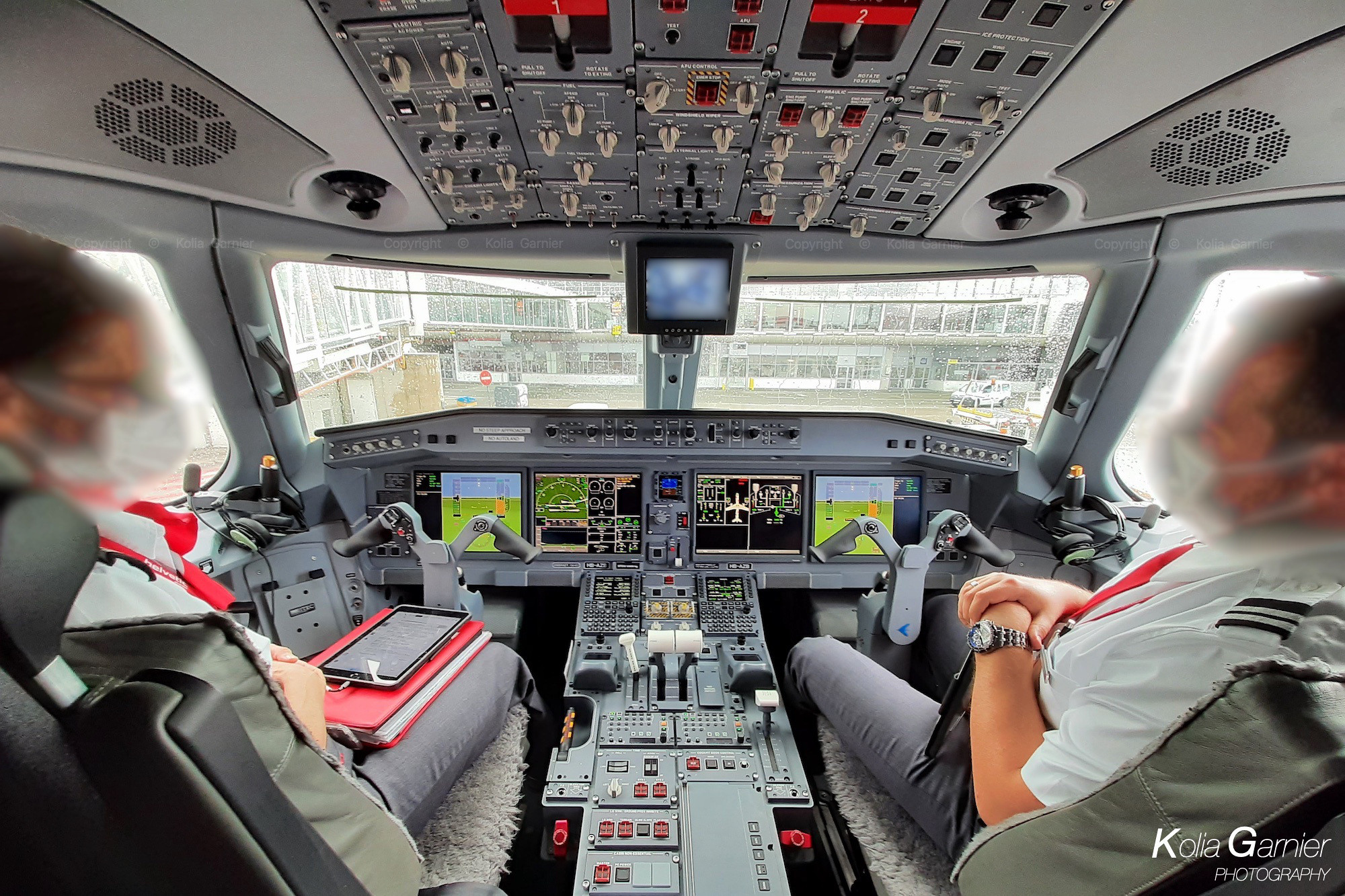 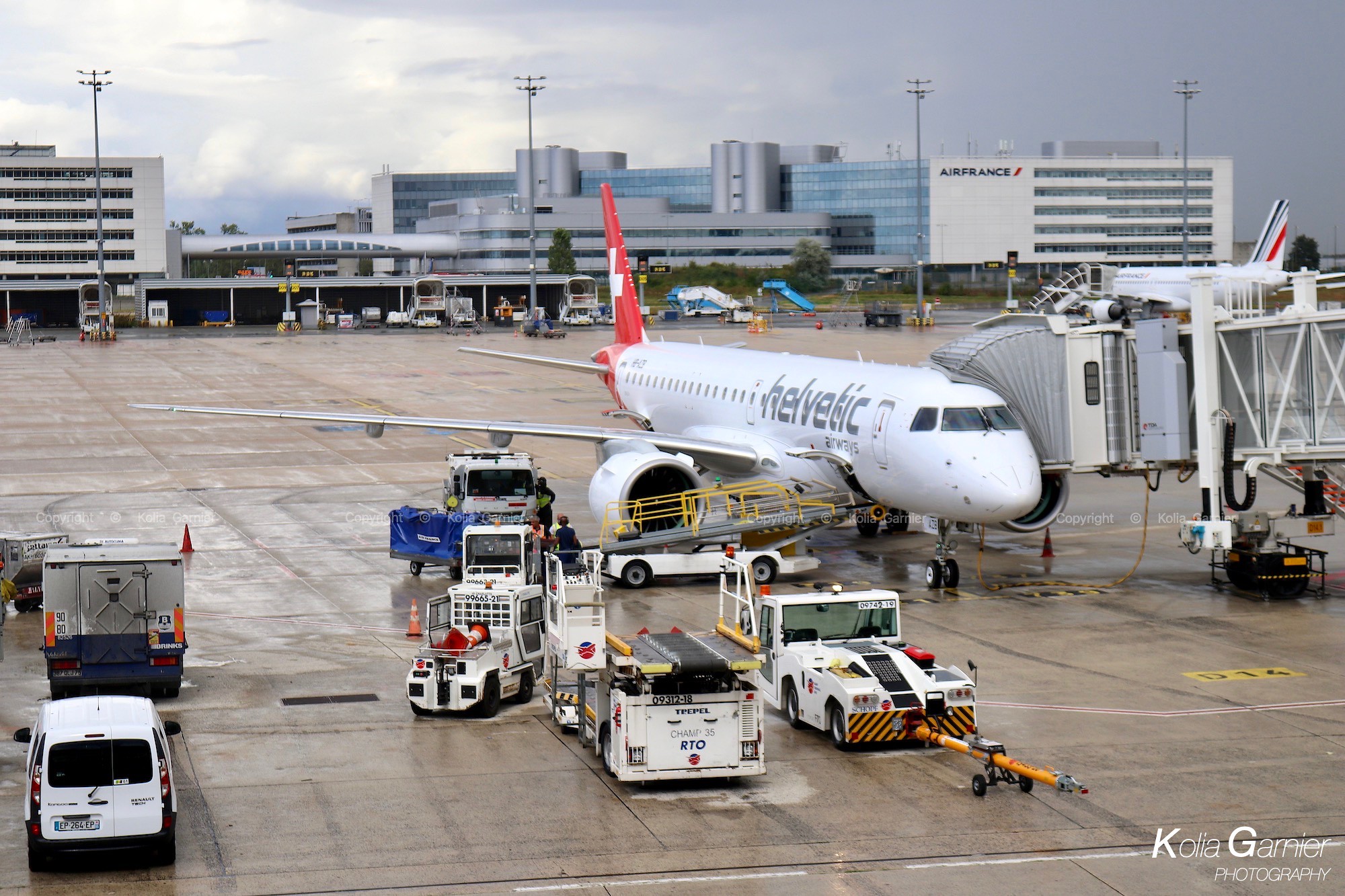 A last picture of today's plane which flown me to Paris. As you can see it rain quiet a lot while we were taking, but the rain was short… From the departure til the arrival at Paris-CDG I didn't have to show my sanitary pass. But there was one difference since last time I took a plane, it was easier to see where we could be tested. The place where to be tested was at the lower floor next to the RER-TGV station.

Then I went to take my train to go to Paris. I was surprised because I found only one screen on the plateform for the whole train, and it was crazy to see that to travel with luggages, it was difficult, and it was so crouded when I arrived in Paris centre. Next time I would prefer to take the bus, like I use to do before. But the probelm, is that it's not very well shown how to take the bus at the airport… unfortunatly.

Thank you for your reading °-)

In General it was a nice flight, but the plane was a bit noisy, and with a tight pitch. The crew was kind, and professional, despite the very light service we had. One question, during the time that economy class is getting a low cost service, business class, is having a quiet "normal" service... Quiet sad ! Zurich airport is very convenient airport, to join from tranports (train, bus etc.) And Paris, dosn't change, the way by RER is not the best one, espacially because it is often crowded.

The contributors of Flight-Report published 64 reviews of 4 airlines on the route Zurich (ZRH) → Paris (CDG).