By marathon 2982
Published on 16th November 2013
(I translated, expanded slightly, and added a tourist bonus to this archive Flight Report originally posted in French here)

All my Chinese colleagues told me: You are going to Sichuan this summer? Surely you will go to Jiuzhaigou, of course!

The weather had been dreadful on the way in, but I have enough in my archives to post a Flight Report on the return flight. It was probably the most expensive domestic flight per km in three years of travel in Mainland China: the full fare when I posted the French version of this FR was at 1,310 RMB plus travel agency fee, which made it 150 EUR for 240 km, as much as the 1500 km CTU-PEK flight, to be multiplied by two for the round trip. But the only other solution was a twelve hour bus ride on barely repaired roads after the 2008 earthquake, and the distance is of course much longer by road than by air.

The elevation of Jiuzhaigou is roughly 1,800 m above sea level, but it is located in a deep glacial valley where you cannot possibly build an airport. Well before dawn, a taxi driver was waiting for us for more than an hour's drive all the way up to Mainland China's then third highest airport, at 3,447 m above sea level (Number 1 was at time of flying currently that of Lhassa, in a valley at 3,570m above sea level, but as of 2013, the altitude record now stands at 4,411 m, serving the Yading natural reserve in the south of the same Sichuan province in China). The Chinese flattened the top of a mountain to install that 3,200 m runway.

Arrival at dawn at Jiuzhai Huanglong, a terminal which has exactly twelve seats airside,

and we feel lucky to be there before the arrival of a busload of Japanese tourists. 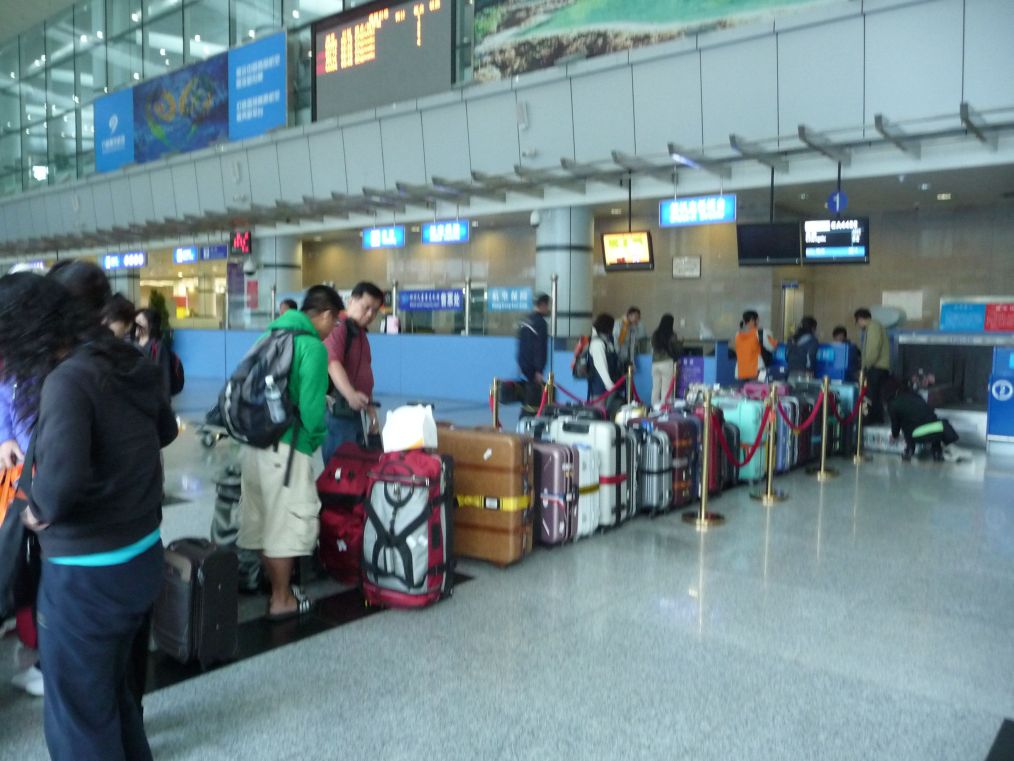 There is not much of a choice when you want to reach Jiuzhaigou: two flights from Xi'an, several from Chongqing, and all others are from Chengdu, the capital of the province. 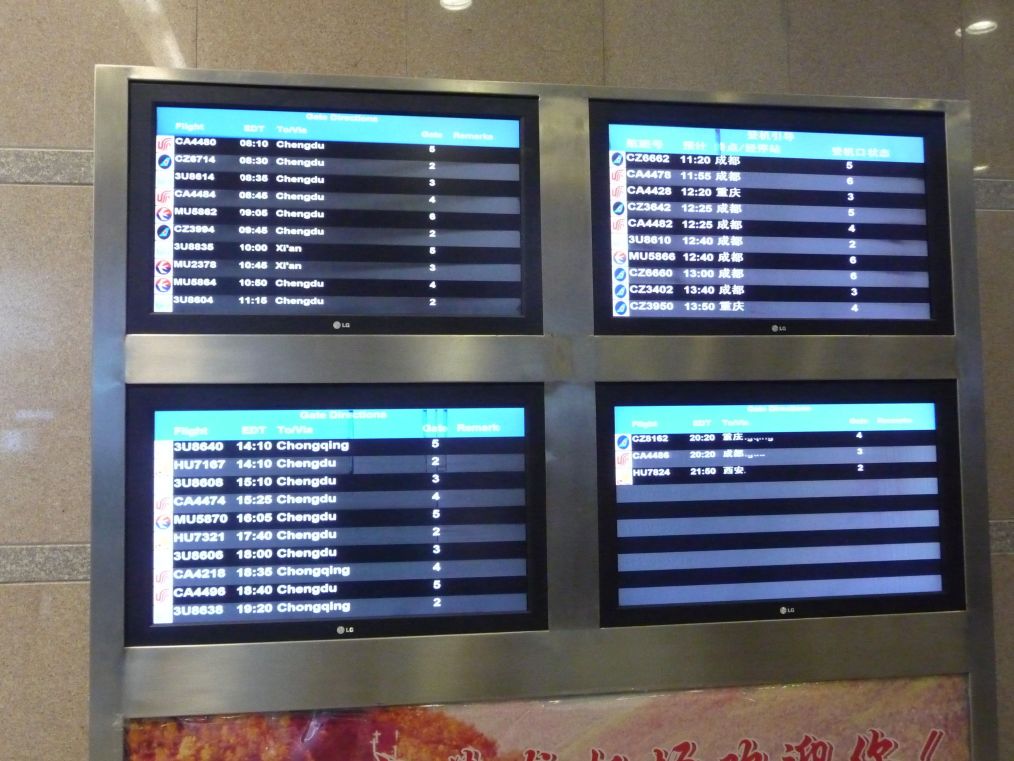 At the security check, there is the usual display of forbidden items on board. Here, there is also a small oxygen canister on the far left. Huanlong National Park is close to 4,000 m high and some tourists buy these oxygen bottles to make it, the same kind which are also sold together with postcards in Tibet. Furthermore, the Han Chinese appear to be statistically much more prone to mountain sickness than the Europeans, from my experience in Tibet. 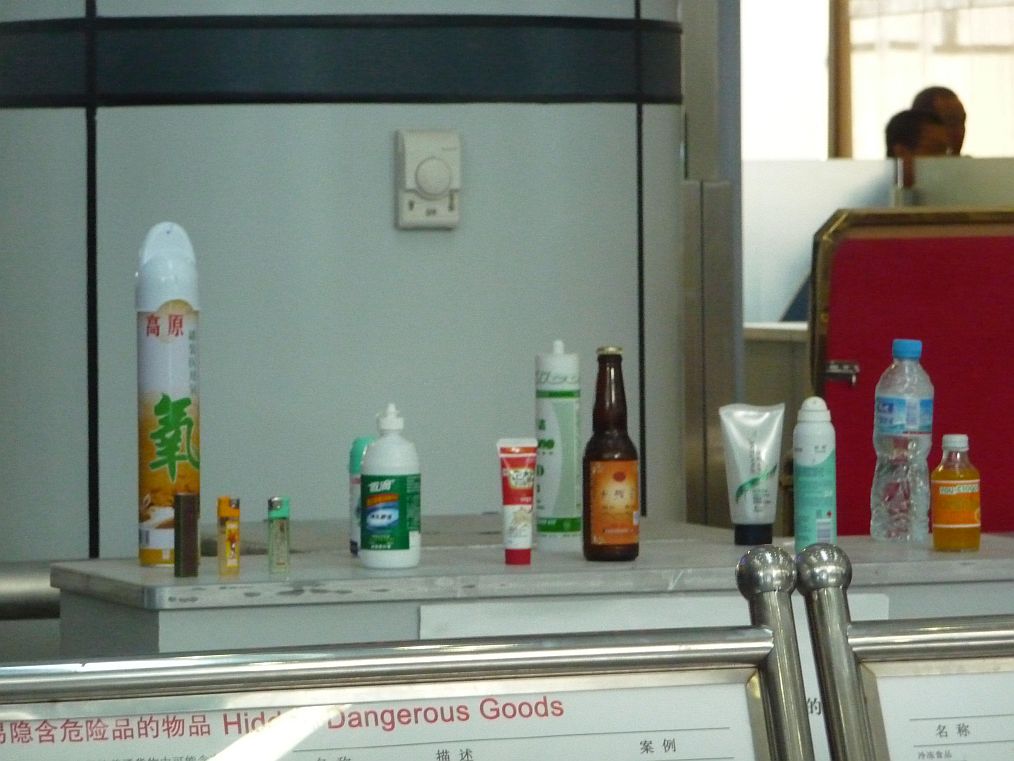 Bar with internet and oxygen! 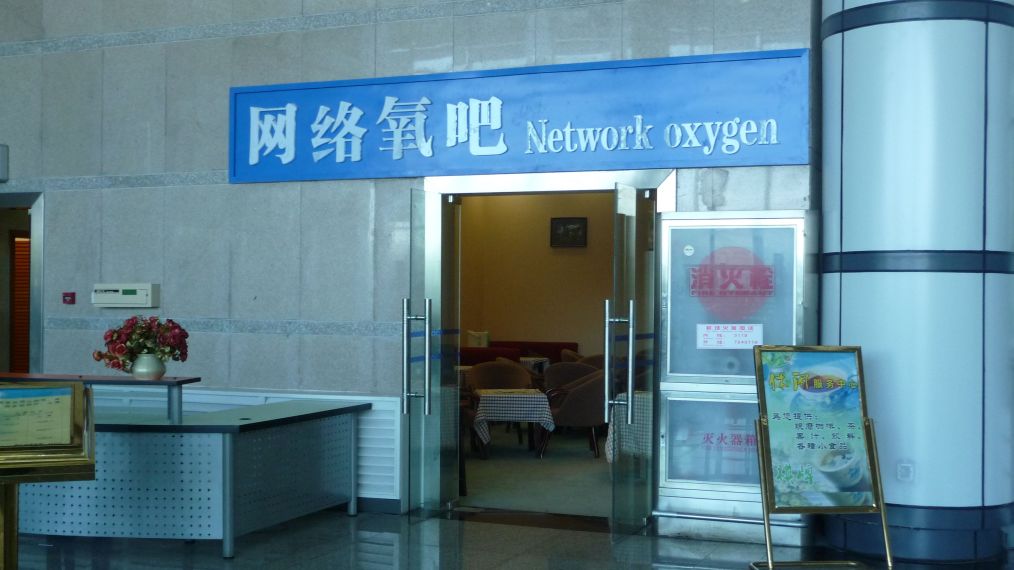 This is the A319 which will bring us back to Chengdu in a superb landscape.

Fog rises from the valley Arrival of a Sichuan Airlines aircraft

… and a China Eastern one I am unfortunately on the wrong side from the lighting point of view: looking east in the early morning, above a spectacular landscape of mountains without any trace of human activity. The plane does not rise much, since it is actually going down to Chengdu which is only 500m above sea level. I did not identify this airport close to the bend of the river, about ten minutes before landing in CTU 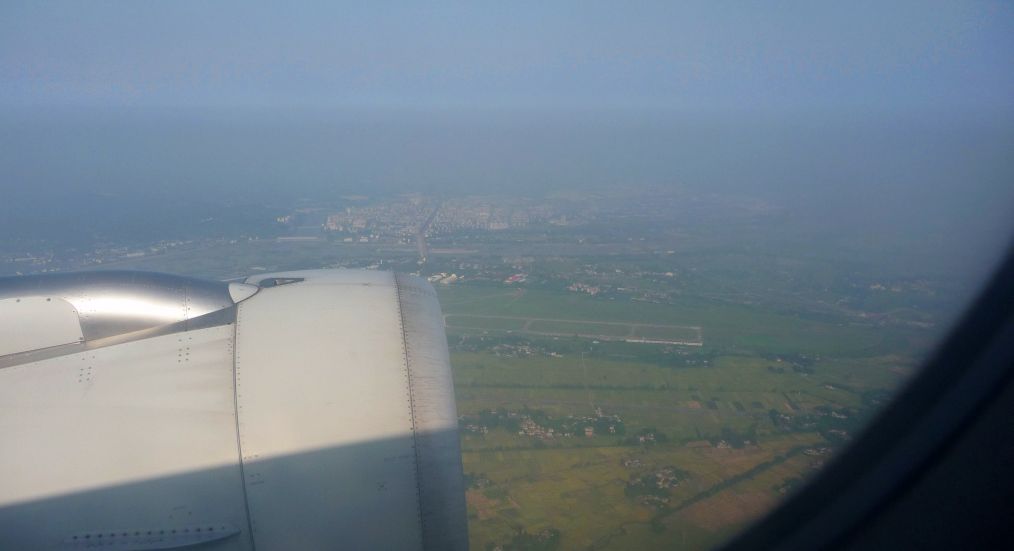 Housing projects in the outskirts of Chengdu 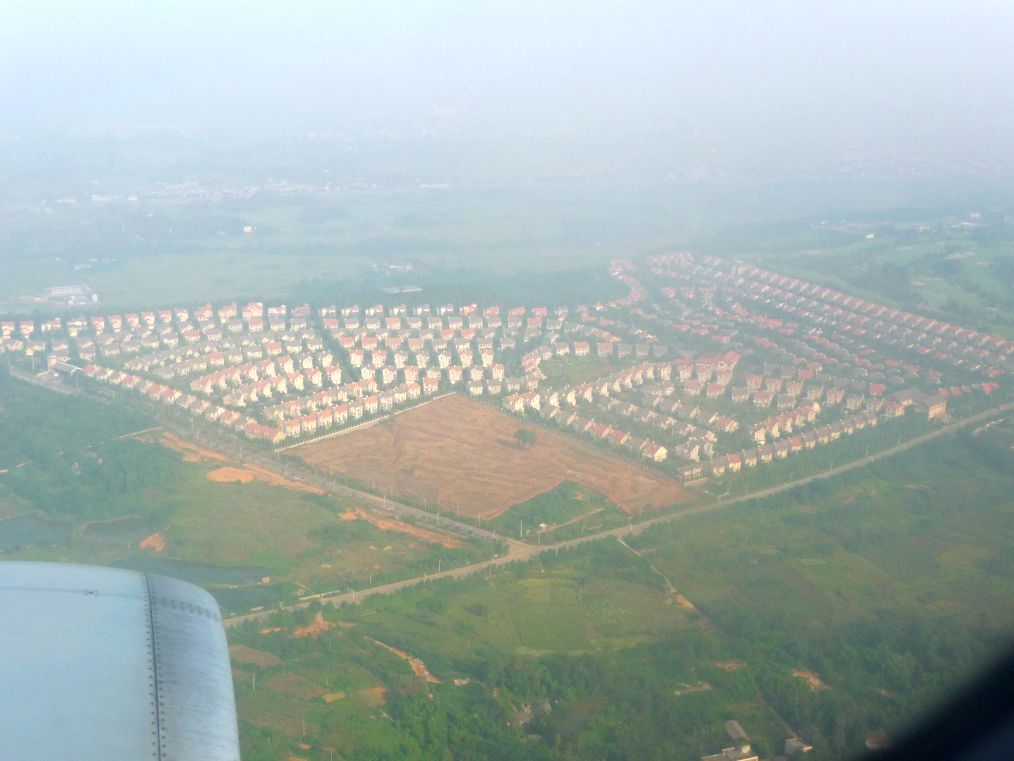 I do not remember anything about the food served on board, and the flight attendants. But this take-off in such pristine air…

What was the point in spending so much to go to JZH ? This airport, officially called Jiuzhai-huanglong Aiport, serves the twin national parks of Jiuzhaigou and Huanglong, both listed in the prestigious Unesco World Heritage List. Jiuzhaigou is a Y shaped valley dotted with spectacular vistas on series of lakes. There are around one hundred kilometers of hiking trails all made out of wood. 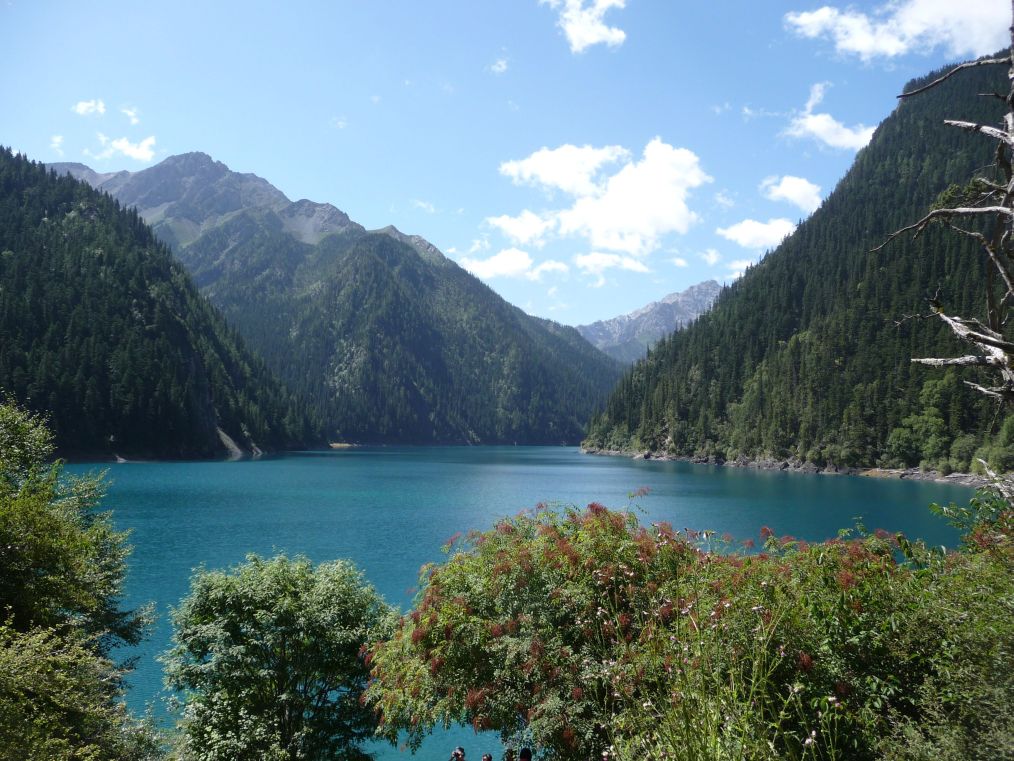 That is also the location of one of China'a most famous waterfalls; you can often see its picture in Chinese restaurants 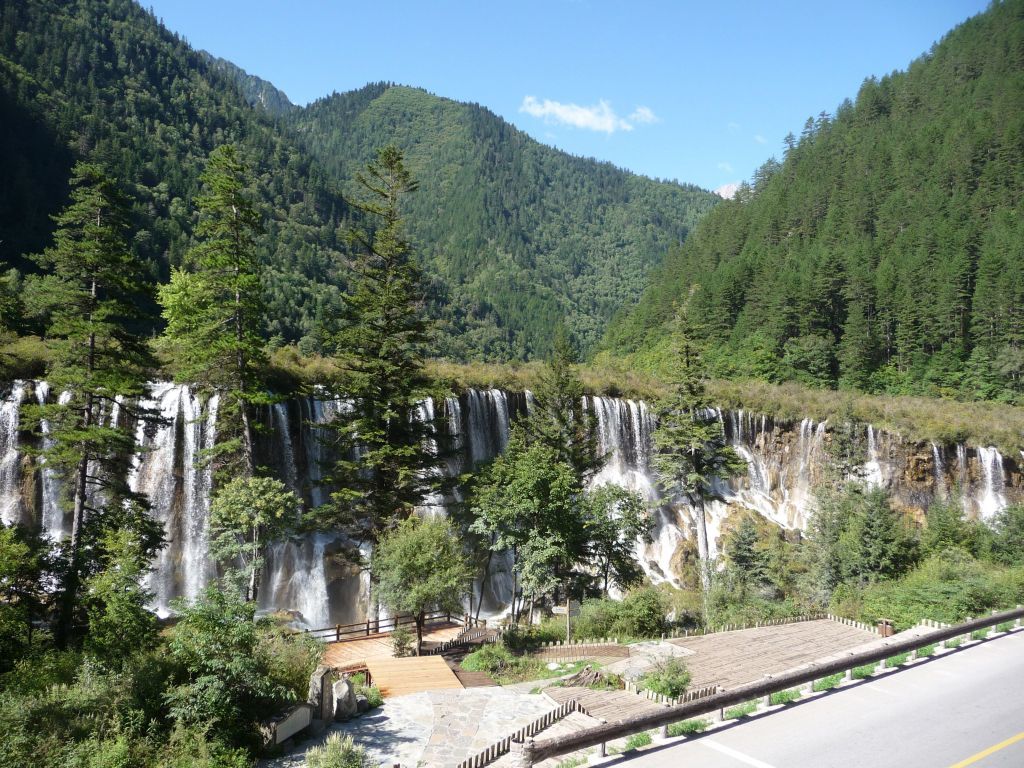 Why are these women waiting with these bundles of bulky clothes ? 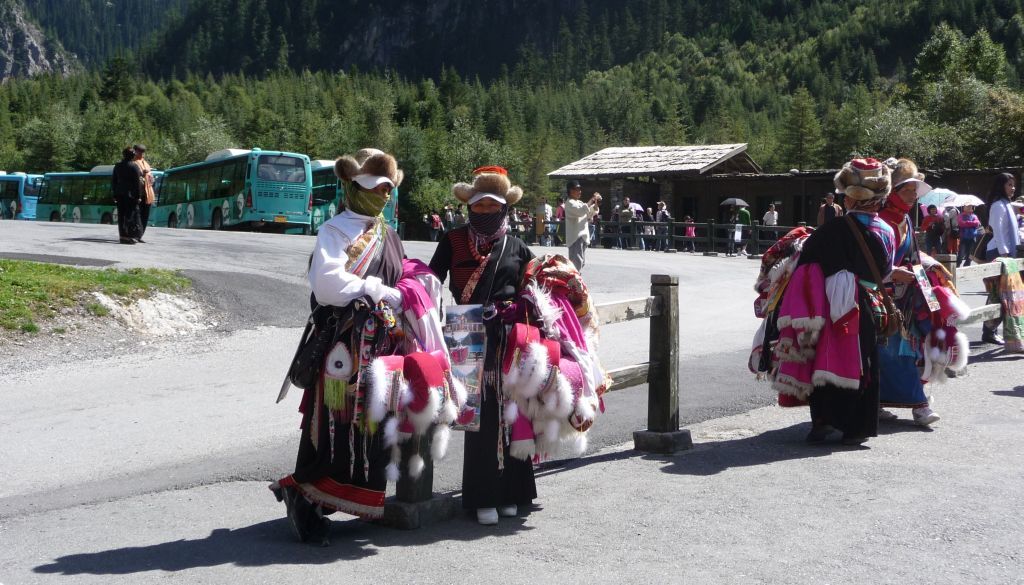 They rush at the arrival of each shuttle bus 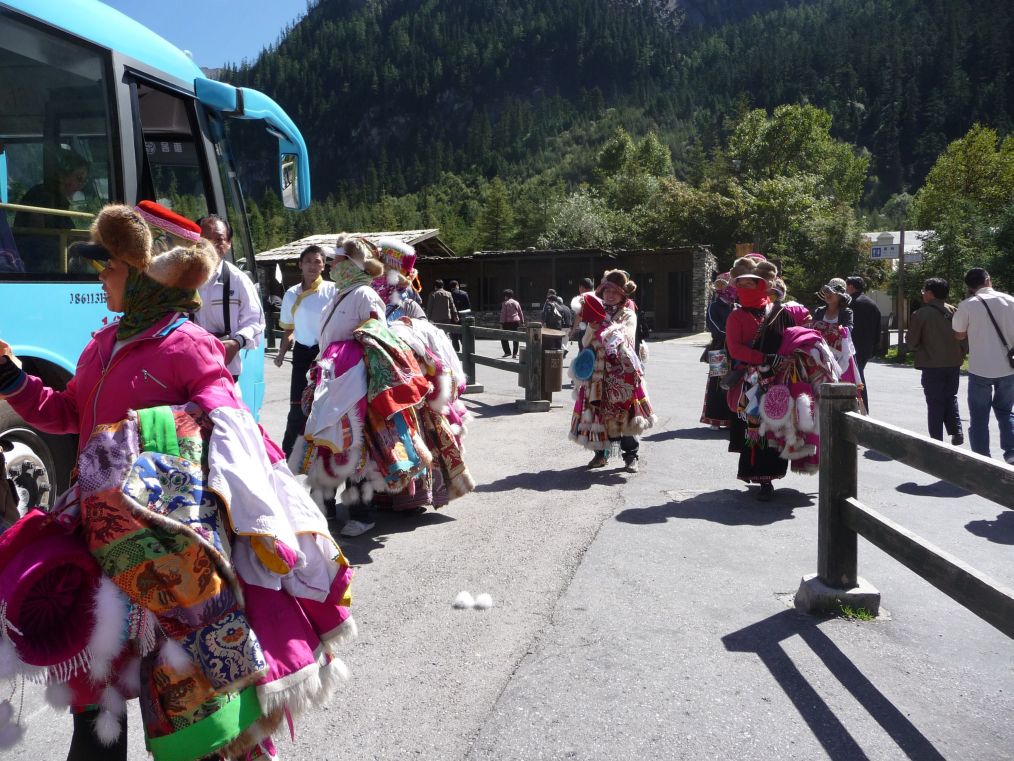 … and propose pictures in ethnic clothes, which is extremely popular among young Chinese girls and creates a significant business in tourist areas. 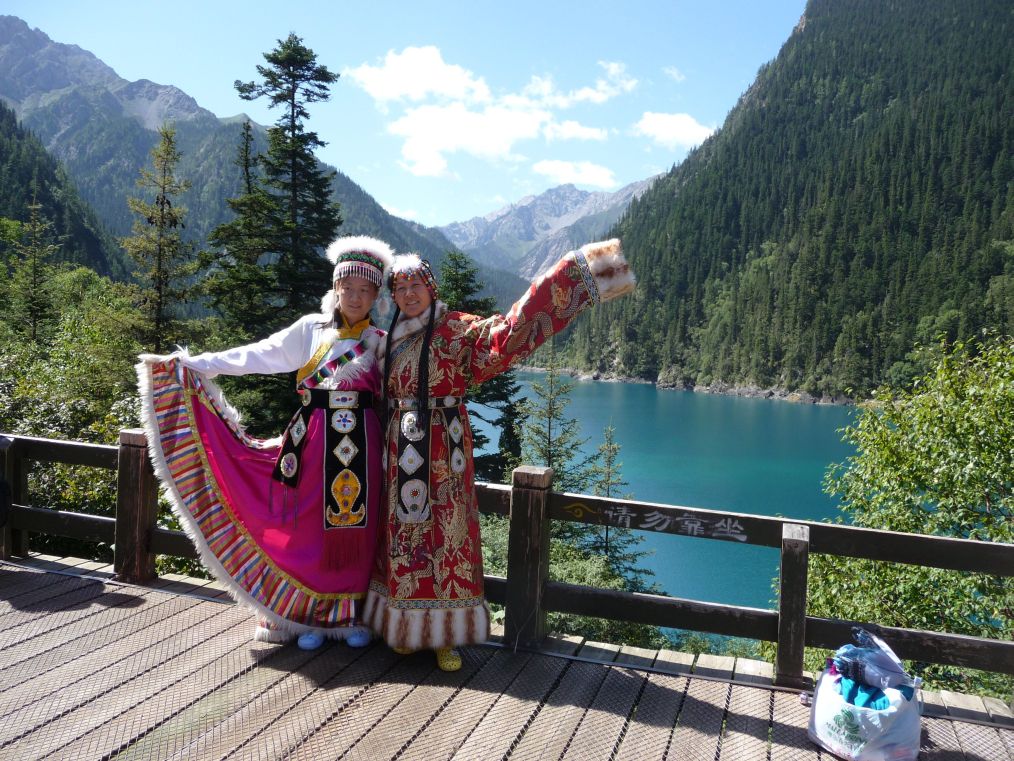 (Jiuzhaigou is part of the ethnic Tibetan area, which extends very far beyond the present Tibet autonomous territory). 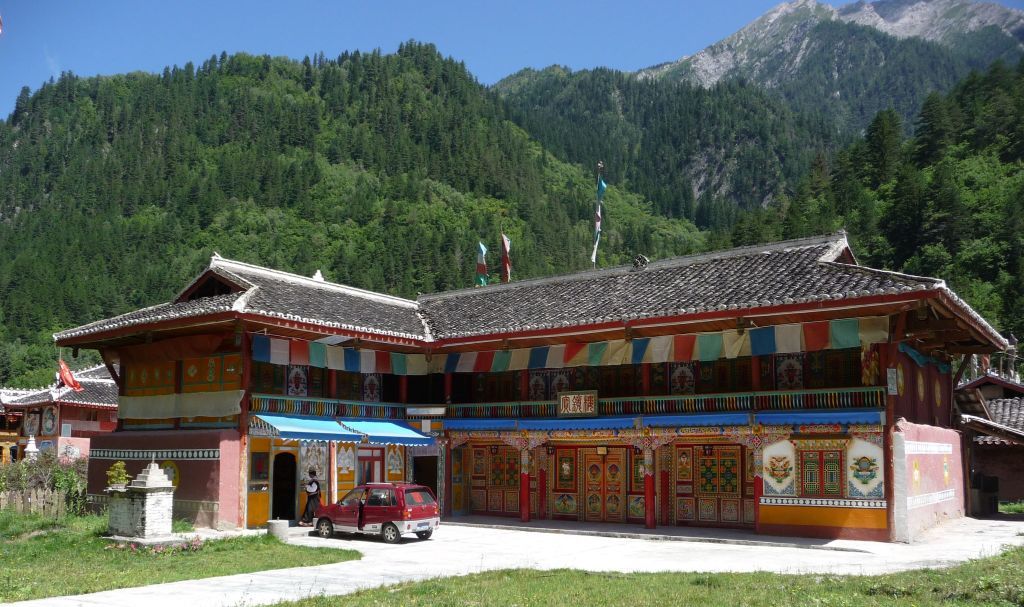 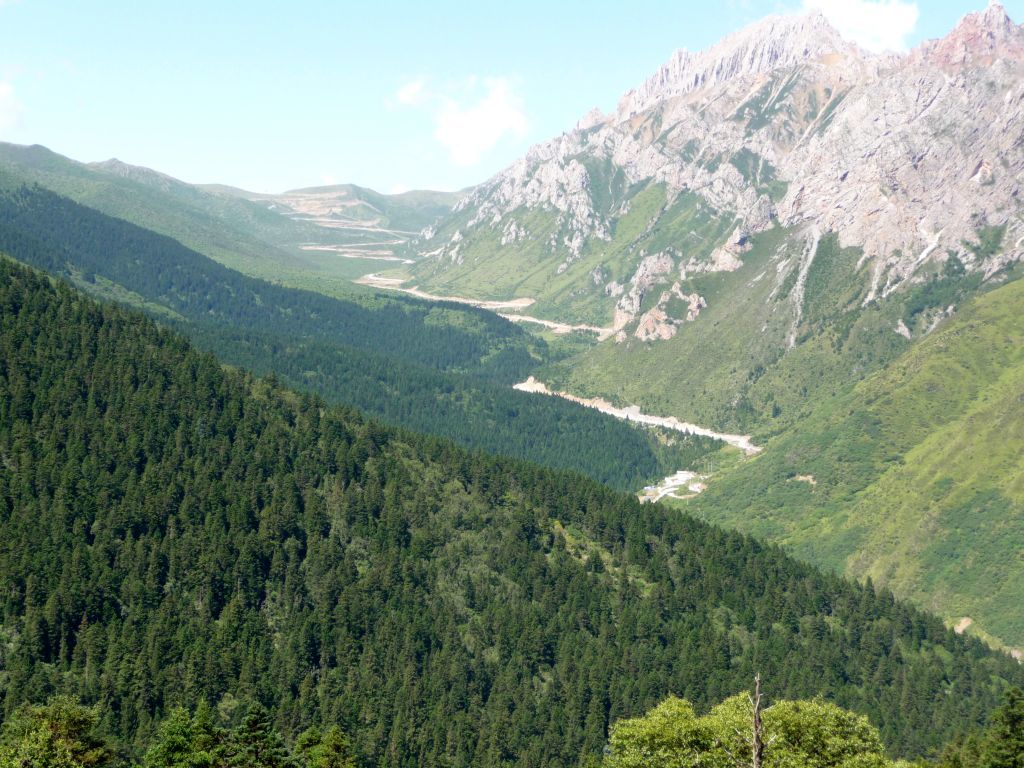 … to reach Huanglong, a spectacular series of travertine pools. 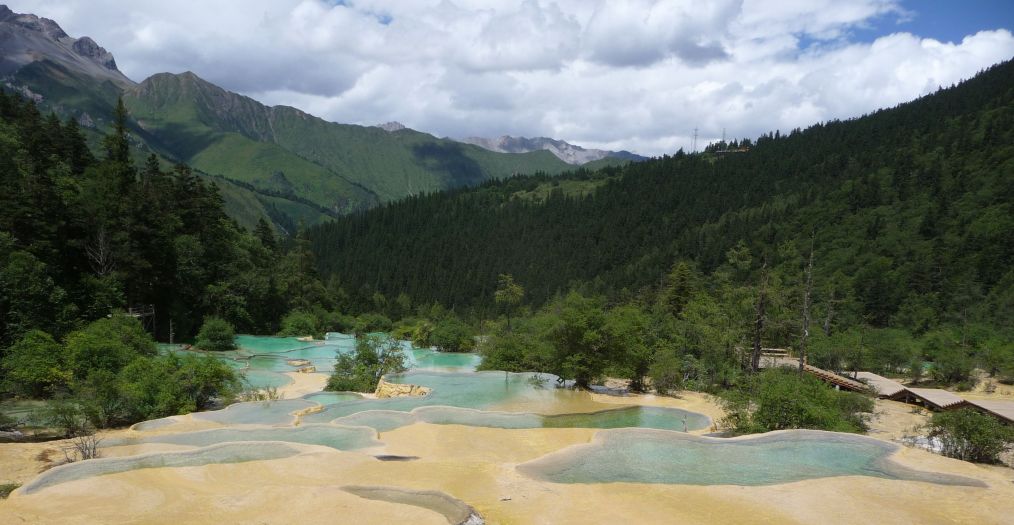 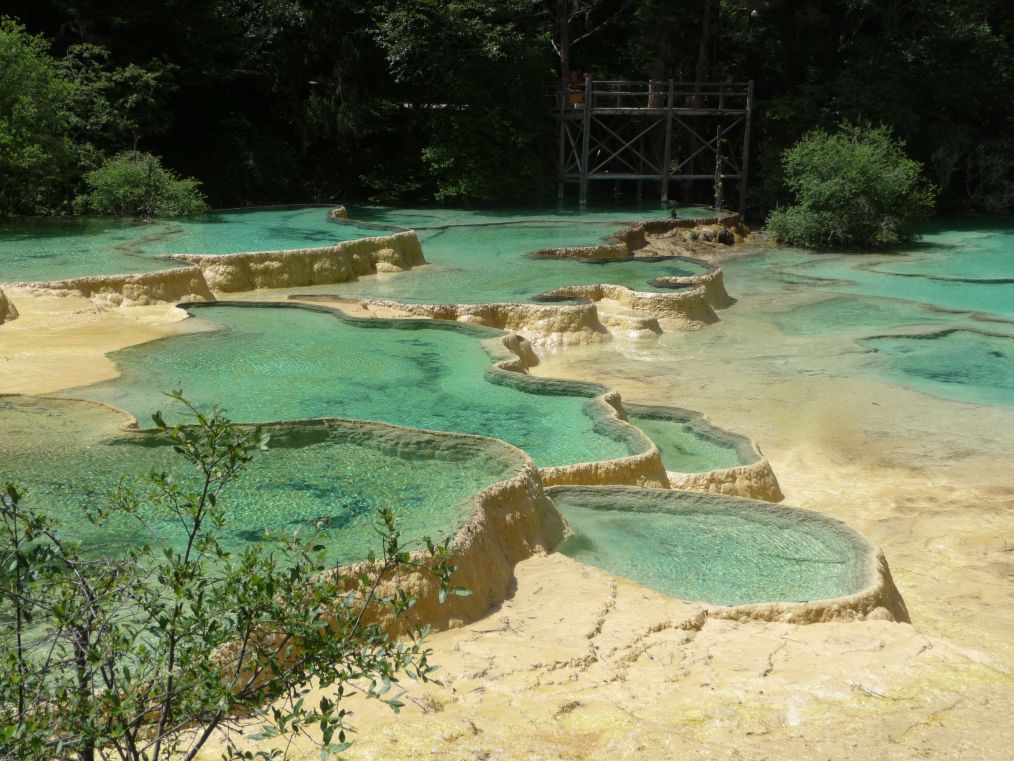 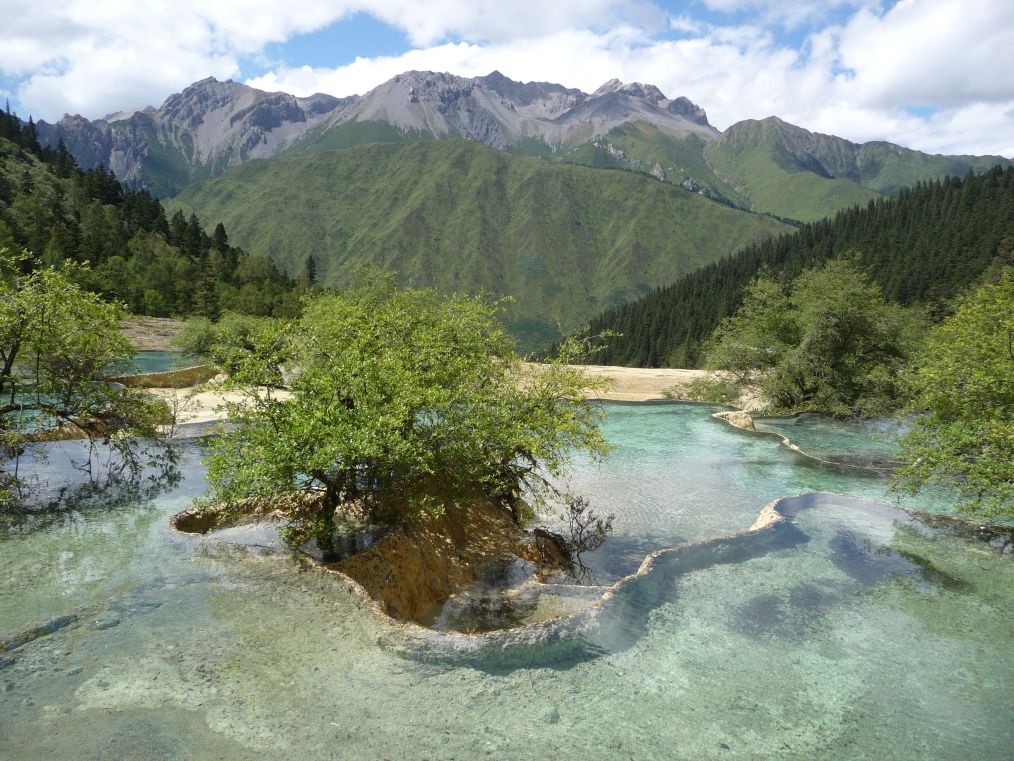 Jiuzhaigou and Huanglong fully deserved the three days we spent there. Note though that Huanglong should not be visited in spring : the pools are dry at the end of the dry winter season.
See more

Jiuzhaigou and Huanglong are two exceptional national parks to be visited before the development of tourism in Mainland China makes it necessary to book accommodation five months ahead, like at Yosemite and Yellowstone, even though the trip is either very expensive or very long.

And there is the bonus of an exceptional airport.

The contributors of Flight-Report published 3 reviews of 1 airlines on the route Jiuzhaigou (JZH) → Chengdu (CTU).

The airline with the best average rating is Air China with 7.1/10.