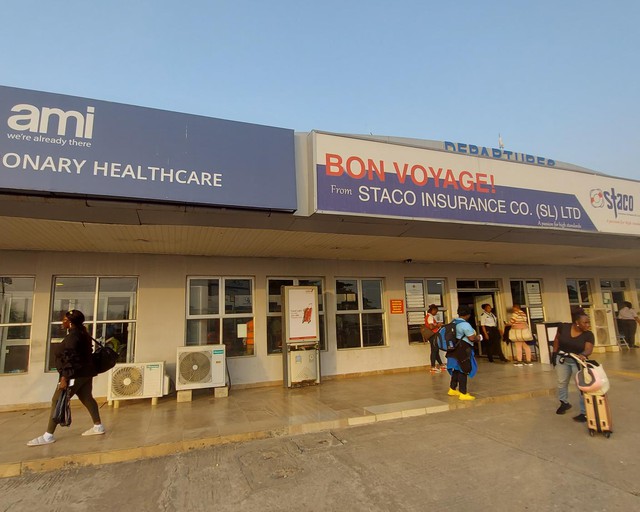 Please read my previous flight report here for information about how unusual Freetown Airport is and what the capital city of Sierre Leone looks like.

I took the boat at 16.00, almost four hours before the scheduled departure time of my flight. 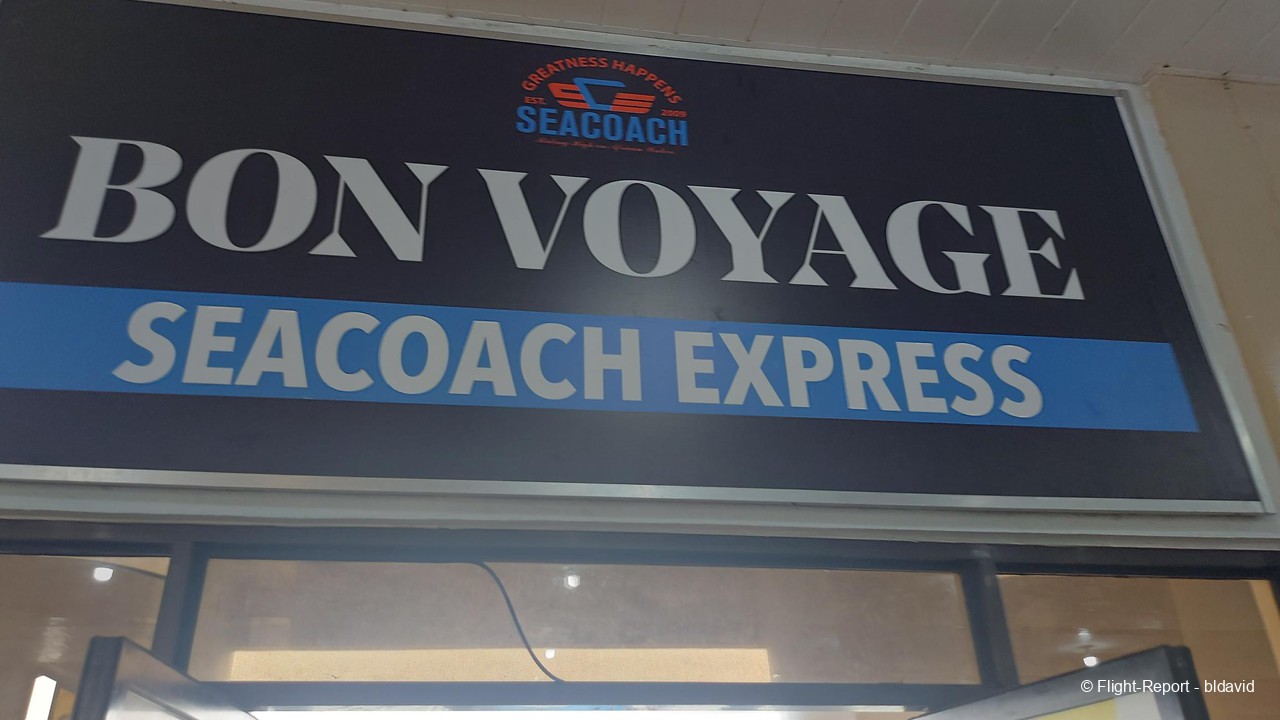 Boats connect to all flights. They’are expensive ($45 each way) although the price includes the bus transfer from the port to the airport. The boat I took was small with a capacity of around 20 passengers. 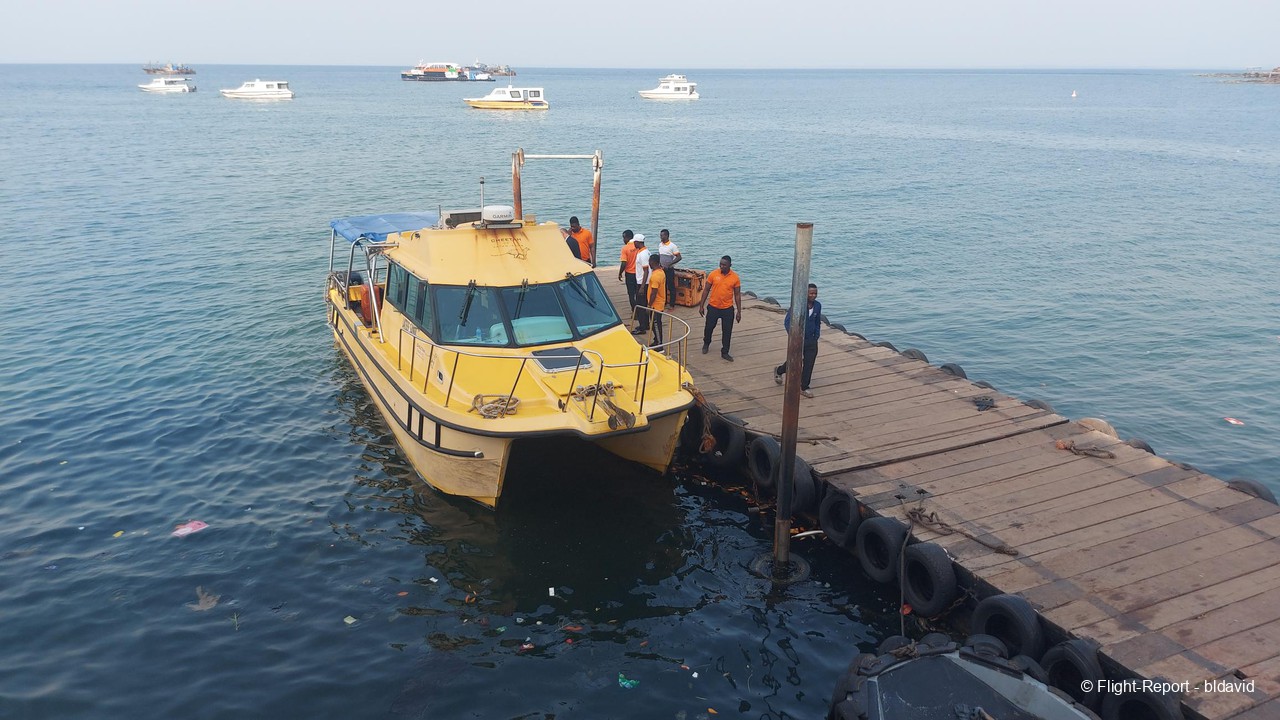 This boat was going slowly unlike the one in the evening of my arrival. 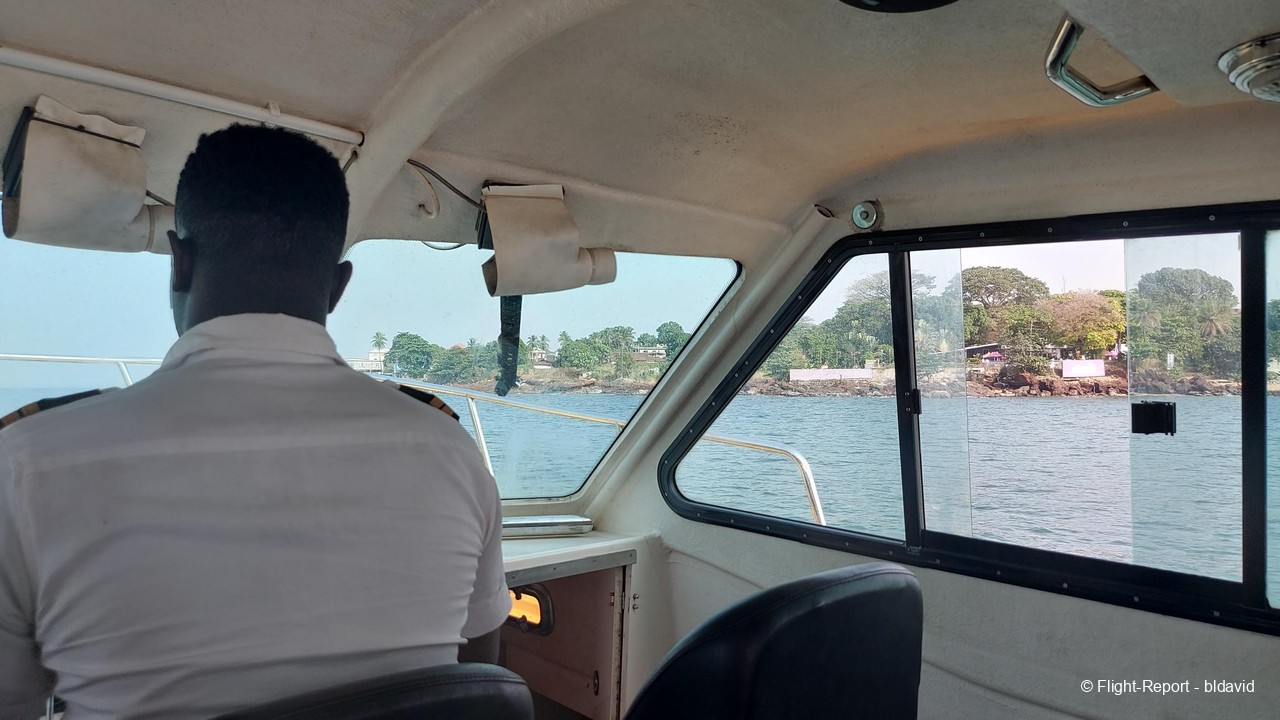 We saw this fishing boat on the way. 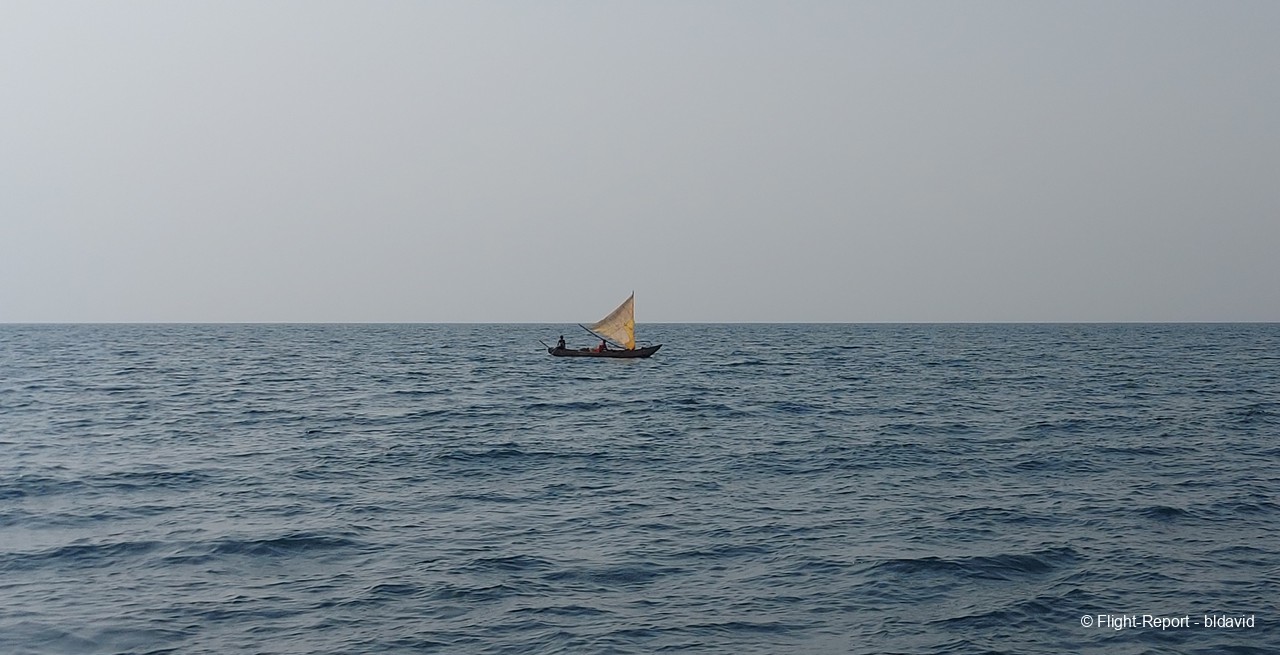 The crossing took close to 40 minutes. This is what the port looks like on the airport side. 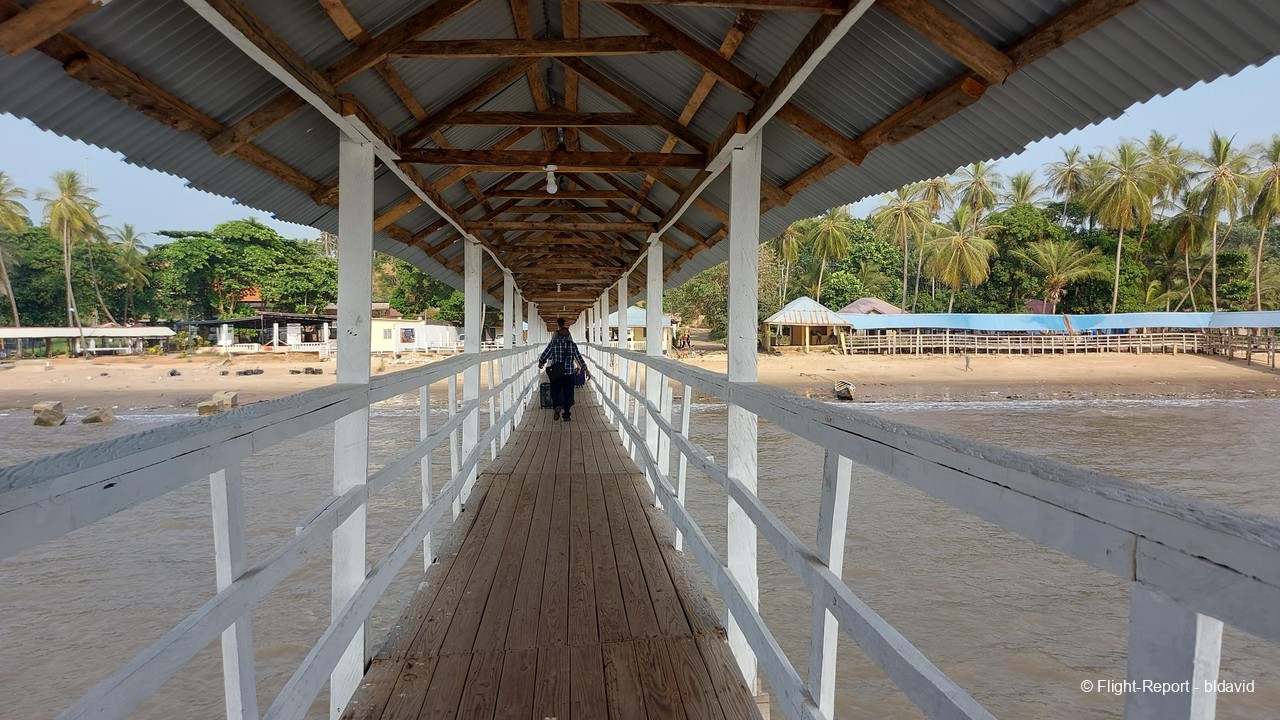 After waiting for 25 minutes in a pleasant semi-open area we boarded a bus that took us to the airport in five minutes. 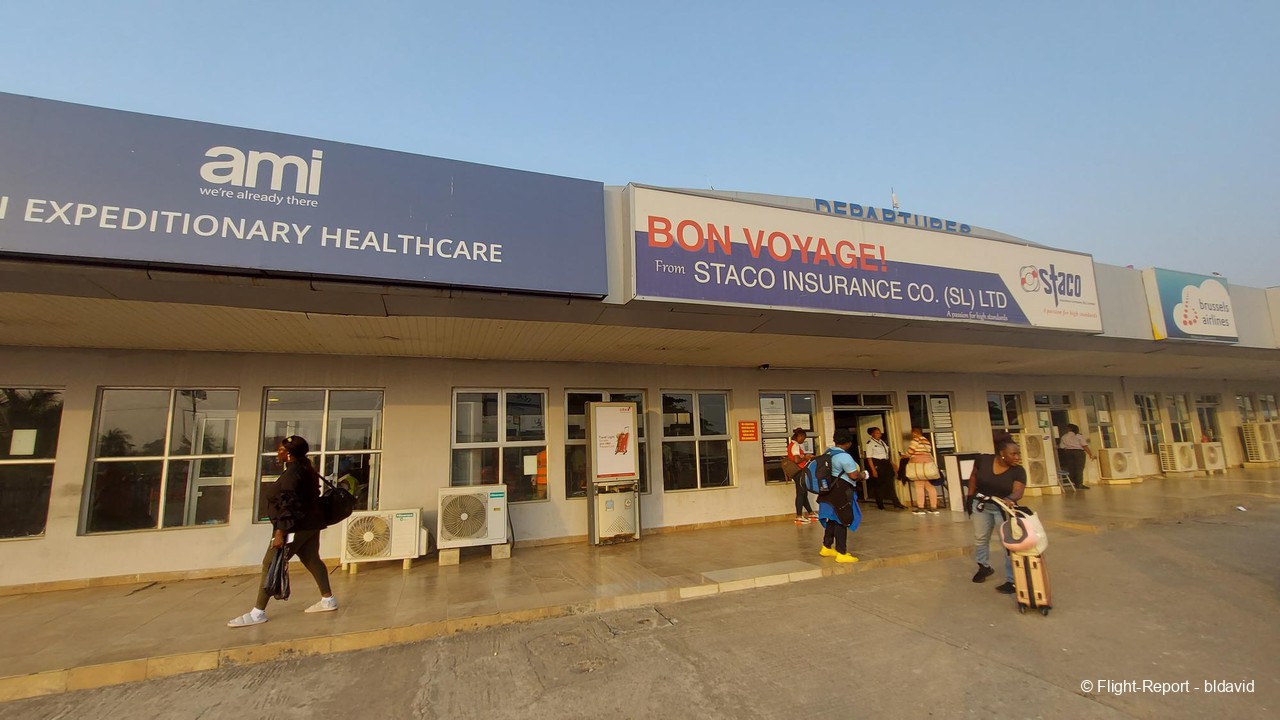 Unlike previously in Dakar and Banjul there were some people in front of me in the queue. Not many, maybe around 20 passengers yet check-in was extremely slow. 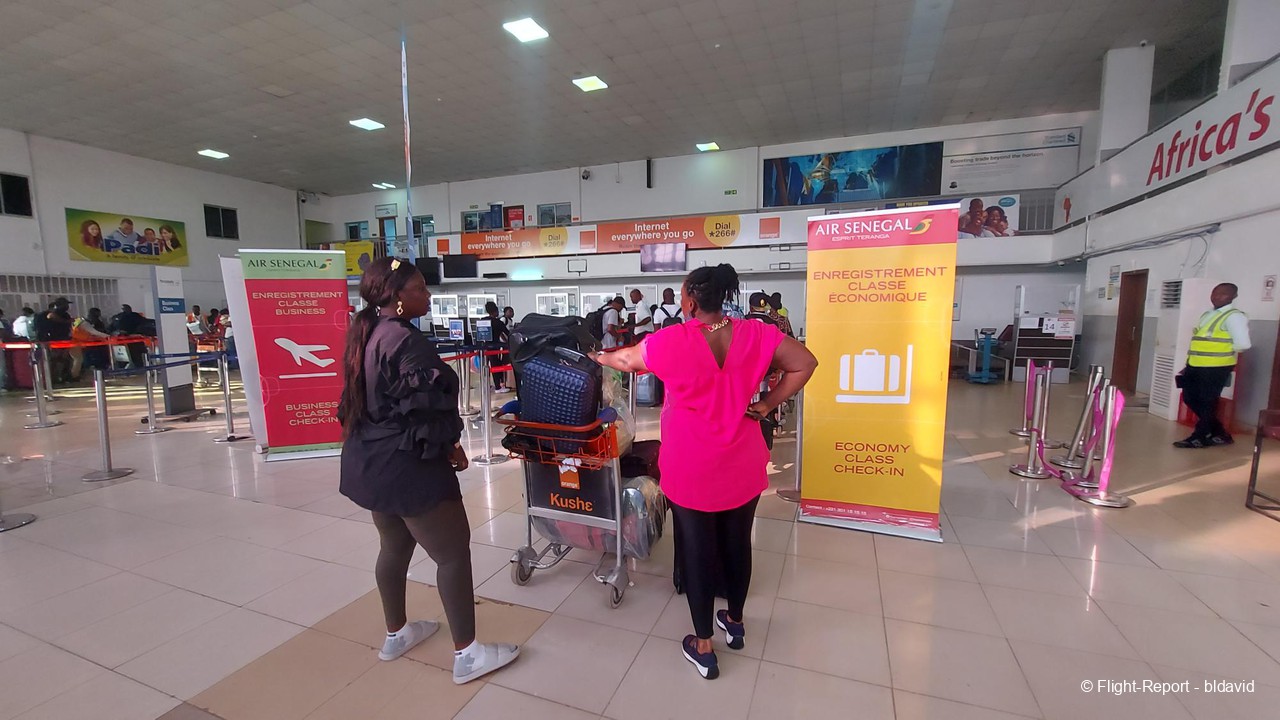 I got to one of the two desks after about half an hour but I was checked in quickly as I had hand luggage only.

Next I had to go out of the terminal building to the arrival side and pay $25 as a securipass fee (I could have also paid it online). I once again went out, in to the departure side (my passport was checked), walked five meters to the entrance to departures (my passport was checked) and walked again one meter further where my securipass receipt was checked. Then came passport control and then security check. The whole process (including check-in) took exactly one hour. 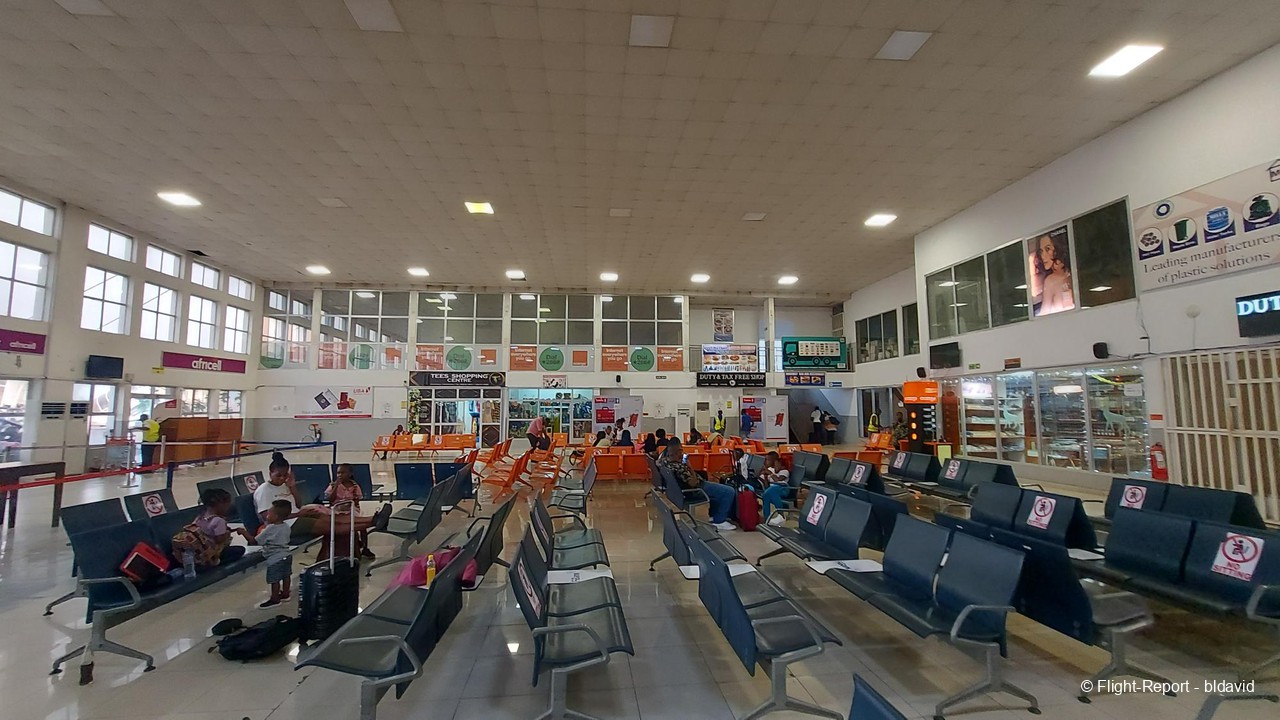 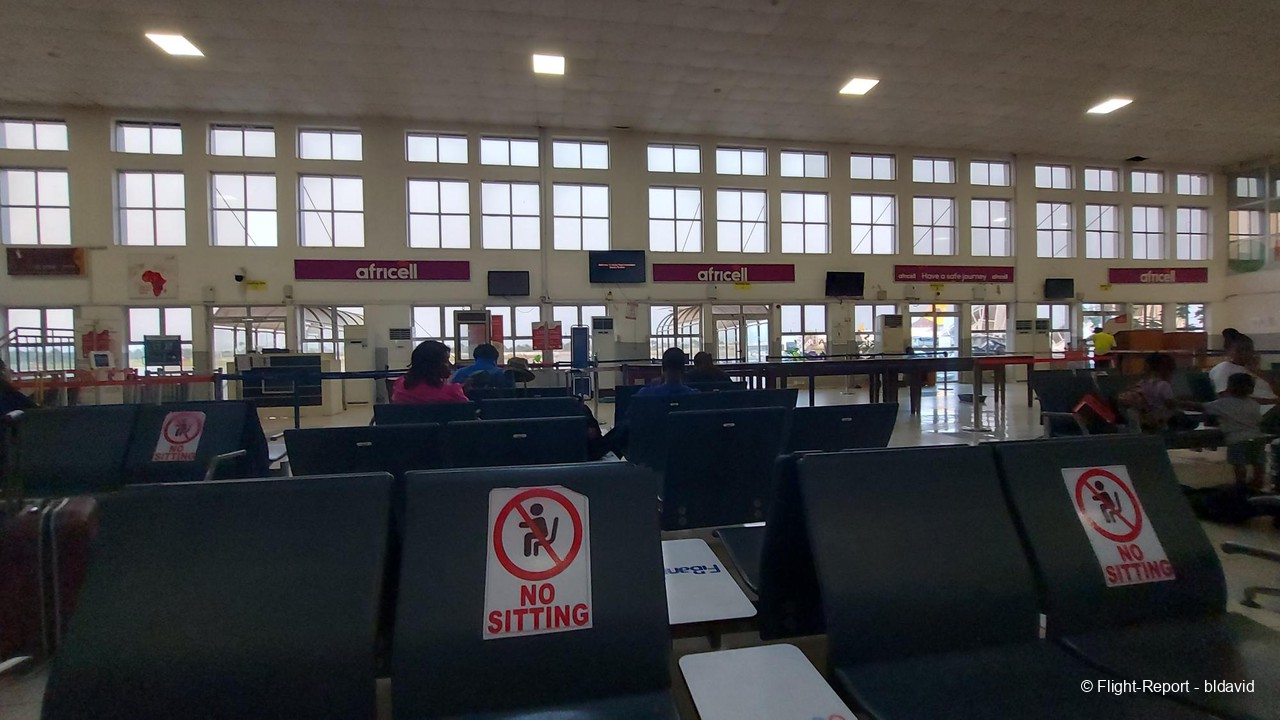 The duty free shop was quite empty. 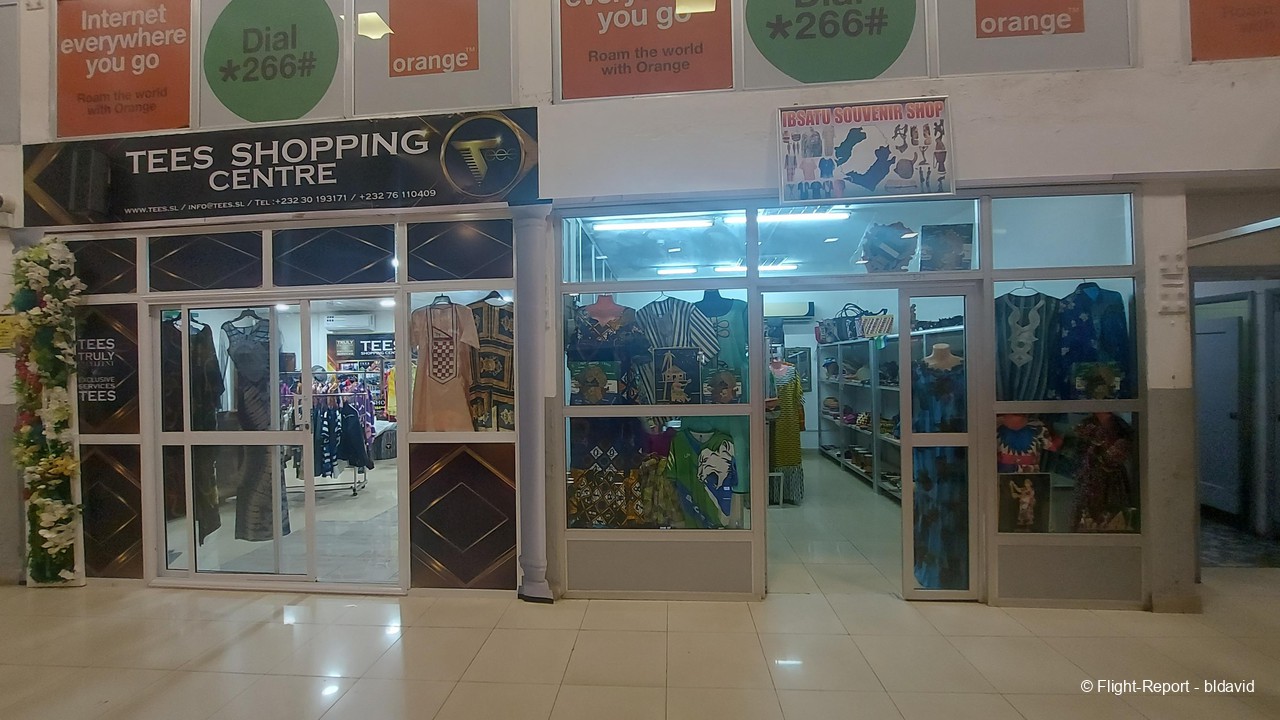 There was most likely a lounge upstairs as I saw some Air France passengers going there but I didn't go myself.

Not a single screen was working so there was no information about the departing flights. However free WiFi was available for 15 minutes so I saw on Flightradar that my usual HUB plane left Dakar with only a small delay.

Boarding was supposed to start at 19.10. Unsurprisingly it didn't neither there was any information about the new boarding time. I asked a few agents but they had no idea. 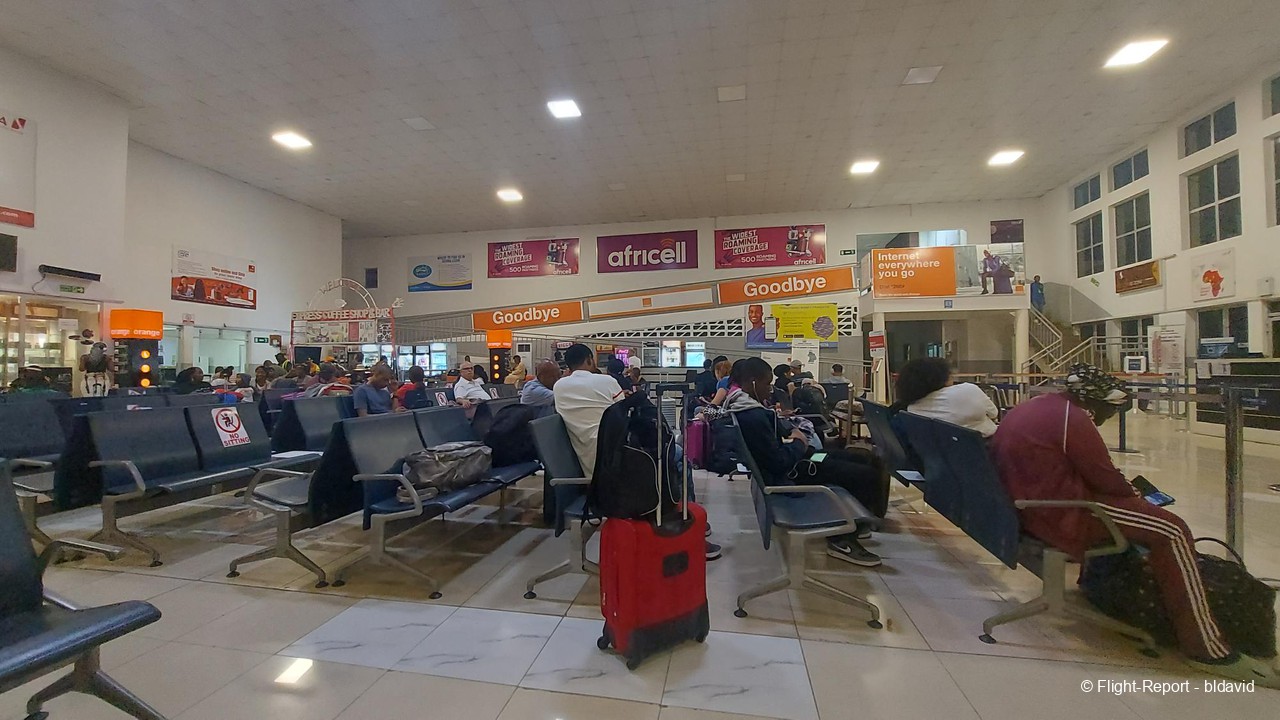 I heard a plane arriving at 19.45. It was the Air France flight from Paris. I could also feel it: the jetblast violently opened the terminal doors. 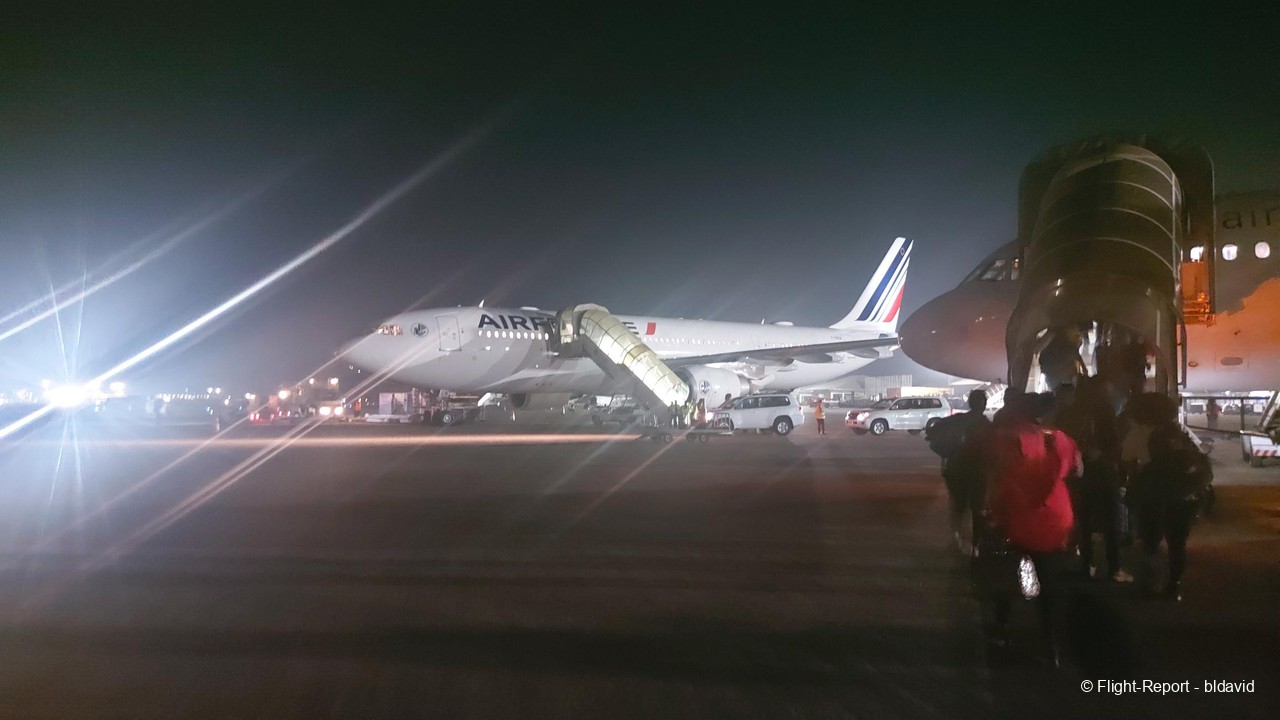 Our plane landed at 20.15. Pre-boarding started soon after. There was no sign or announcement. As the Air France flight to Paris was leaving around the same time many passengers didn't know for which flight was boarding. First documents were checked, then came a manual but rather superficial luggage search, followed by a petdown then boarding the bus. We stood on the bus for another 15 minutes with the doors open with the exhaust fumes coming inside. The actual boarding of the plane was at 20.55, one hour and 45 minutes behind schedule. 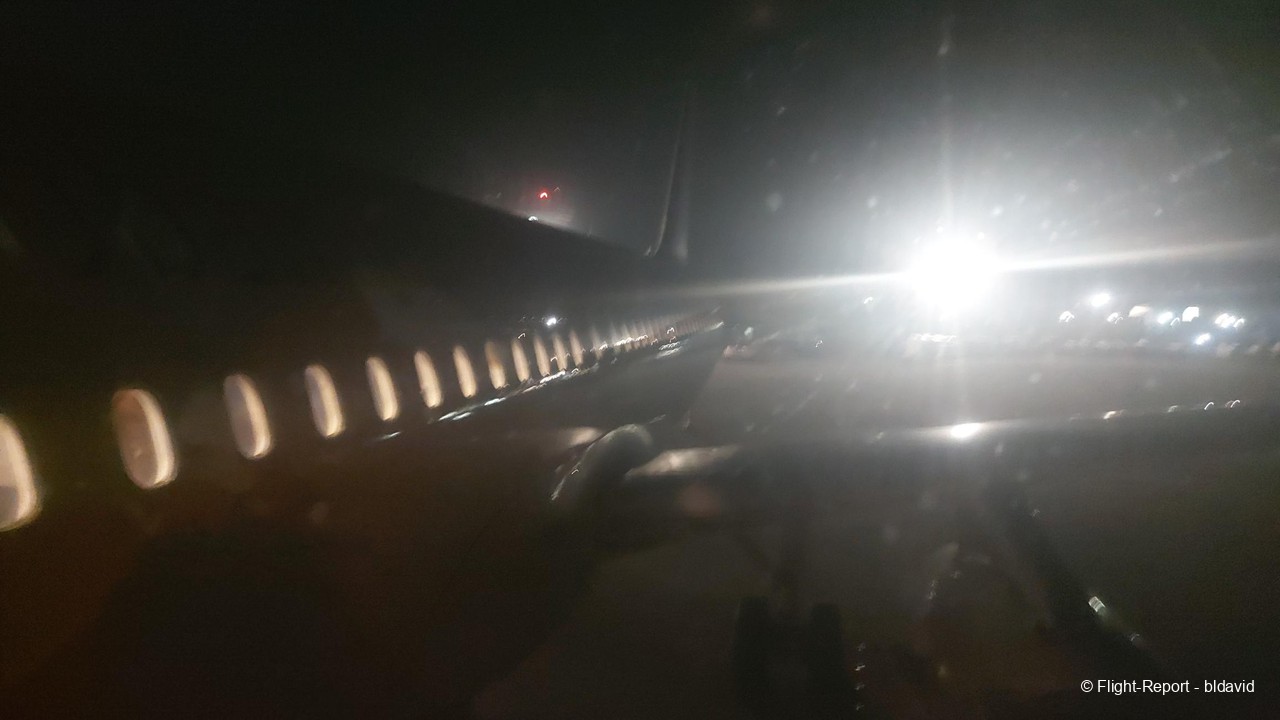 The plane was exactly the same as on my two previous flights. See here and here for more information about the Airhub Airlines plane leased to Air Sénégal. 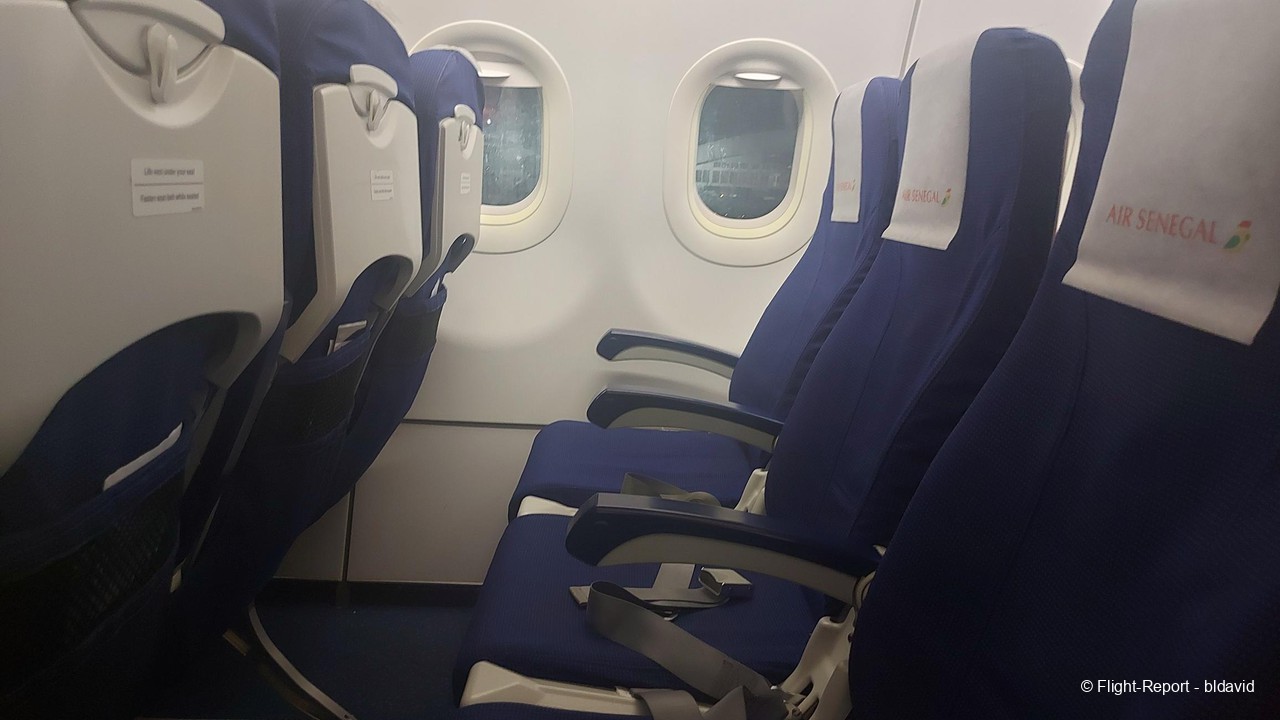 This flight was almost completely full unlike the day before. Boarding was slow as all passengers had hand luggage, many of them more than one piece and the overhead compartments got full quickly. Boarding was completed at 21.23.

The crew was the same as the day before. They were very professional and very strict about all the safety rules.

Meal service started ten minutes after take-off. It was the same chicken sandwich that made me slightly sick the day before - no, thank you. I only asked for a muffin - I got two. 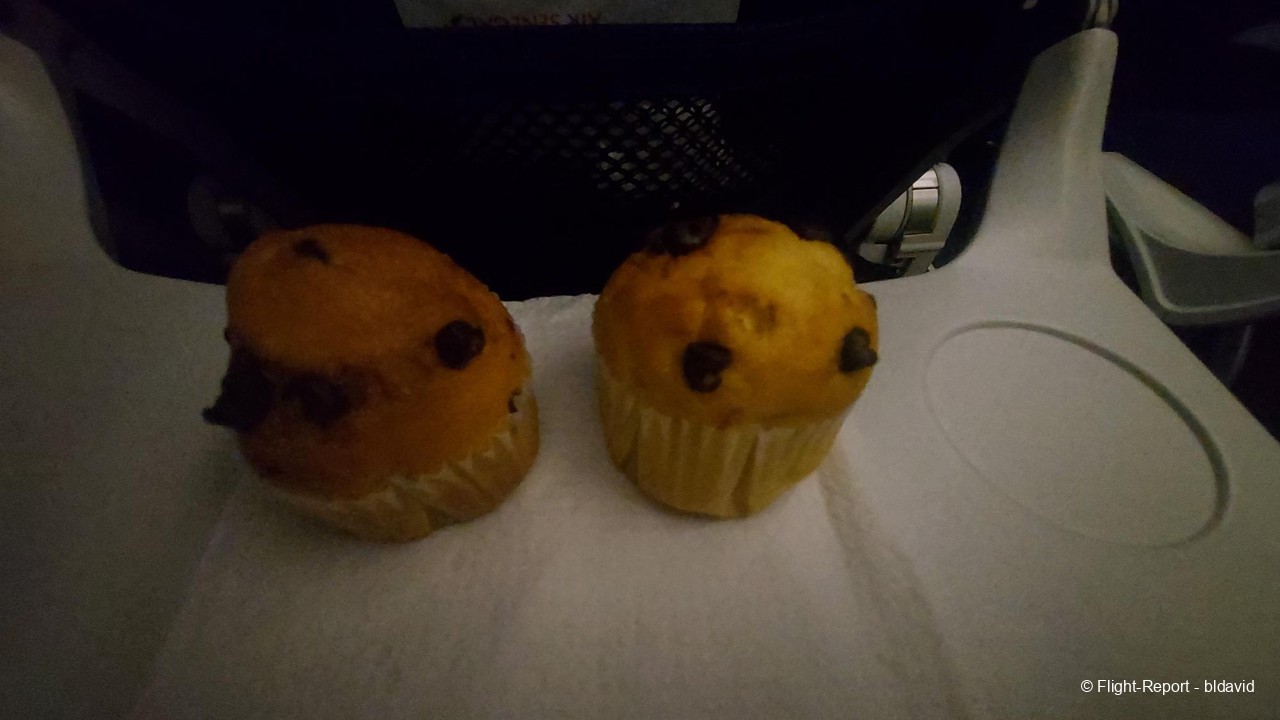 I asked for some apple juice. 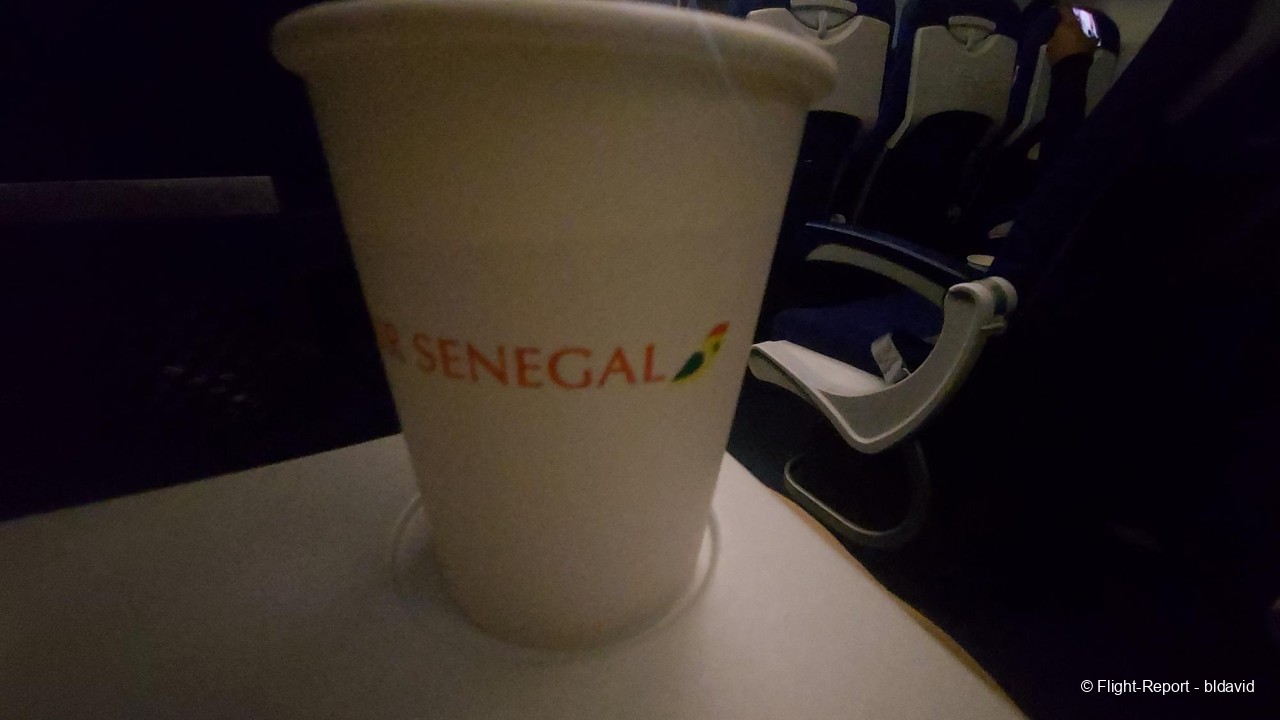 I didn't really mind the delay this time as this meant a connecting time of four hours instead of over five hours for my flight to Casablanca.

Freetown Lungi Airport is old, difficult to access, poorly organised and hardly provides any information. The plane had a standard configuration. Service was minimum but the crew had a positive attitude despite the difficult conditions. Arrival was a positive experience - see my next flight report from Banjul to Casablanca.