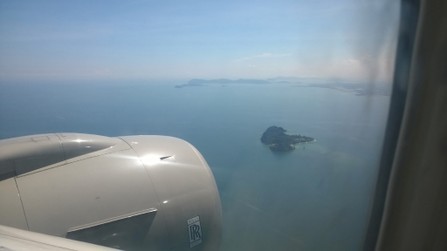 This report is the continuation of my previous story of my short return journey to Shah Alam, all on-board wide body aircrafts. If anyone missed my earlier report, you can go here>>>http://flight-report.com/en/report-10497.html

1st June 2015 - a D-Day for the entire Malaysia Airlines System (MAS) employees as they start to get to know their fate whether most of them (14,000) may get a job at the new company, to be called Malaysia Airlines Berhad, or being listed among 6,000 who would eventually be laid-off with compensation.

BACKGROUND
I was asked by my boss to attend a meeting on behalf of our agency at Shah Alam, the state capital of Selangor, which lies about 30km from Kuala Lumpur. Realising that MAS would upgrade some scheduled domestic flights to larger aircrafts on selected routes, I took the opportunity by booking my return tickets to KUL, all on-board Boeing 777. The upgrade was due to expected surge in domestic travellers during 2 week long school holidays, with parents taking the opportunity to bring their children for a holiday, perhaps a bit further than simply driving.

THE FLIGHT
I was hoping that this flight would be operated using Boeing 777 as scheduled. Although I am glad that I finally got the opportunity to try out MAS's new A330, but I still have a soft spot for the airline's B777. It was the airline's flagship aircraft for a long time alongside their Boeing 747-400.

The flight was scheduled to depart at 8.25AM. Since Shah Alam is located about an hour's away from KUL, I took a taxi from the hotel at 6.00AM. The sky was still dark although the early rays of sunrise begin to break through the sky. Since, I also done my check-in online, I went straight to the boarding lounge, passing through the usual security and got ID and boarding pass checked.

I arrived at the airport at about 7.00AM

Our aircraft parked at the gate. It arrived from Amsterdam's Schiphol as MH19 the day before.

The early morning scene near our boarding lounge.

There is a restaurant serving popular local delicacies near our boarding lounge. I took the opportunity ordering full breakfast of Nasi Lemak, expecting that the in-flight meal would not satisfy my morning hunger.

My breakfast of the day!

Whilst enjoying my breakfast, a nearby patron talked to someone on her mobile phone, apparently shocked to know that there was a (rather) strong earthquake jolting Sabah. I could hear her conversation since I sat just beside her table. I was skeptical at first whether the earthquake happened at that particular location in Malaysia, and I tried to ascertain whether she is Sabahan or Indonesian since Sabahan accent can be quite similar to Indonesian accent. Then, after I finished my breakfast, I looked at my mobile phone and saw dozens of WhatsApp messages popping up . Apparently, my colleagues were all talking about the earthquake in Sabah. Quite a big story.

Passengers started filling the boarding lounge. It was almost a full flight. A hot topic of conversation among some of them was about the earthquake in Sabah. Earthquake disaster is very rare in Malaysia, so this one virtually caught everyone by surprise.

At about 8.15AM, boarding was announced, starting with familes with children and business class passengers. I am among the last ones to board the aircraft. Upon entering the door, I was greeted warmly by the cabin crew. Once I reached the cabin, it was the same cabin layout since the aircraft was delivered in 1998. Software update was done to the IFE system in 2005, alongside business class overhaul, though that was 10 years ago. However, a big plus for being on-board the airline's B777 is that the economy class seat pitch is spacious at 34. Despite, being of older design, the seat is very comfortable, as cotton fabrics are still used to cover the seat cushions, instead of leather that can be found on most Malaysia Airlines fleets today. In my opinion, it is still better than the today's generation of economy class seats.

The economy class cabin is still the same ever since the aircraft was delivered 17 years ago.

My window was covered with morning dews, since the aircraft was parked overnight.

I flip the airline's Going Places inflight magazine. Christoph Mueller is now the first CEO (and first non-Malaysian) to helm the soon to be established Malaysia Airlines Berhad.

The morning dews slowly gone away, giving me clearer view of surrounding.

We were pushed back and then pulled by the tow truck for several metres until the end of the terminal.

The tow truck detached from main landing gear, and engines started to spool. The ground staff on the tow truck bid farewell to us!

We taxied to runway 34R for departure.

We begin turning to the right towards South China Sea.

As we climbed higher, the city of Kuala Lumpur came to view. The weather was clearer due to overnight rain.

I can see the surrounding mountains poking through the layer of haze.

The lake below is Semenyih dam, one of the water reservoirs that supplies water to Klang Valley residents.

About to enter the state of Pahang, though we may also passed over a section of the state of Negeri Sembilan.

Cabin crews working hard to ensure everyone got their breakfast.

Just like my previous flight, the portion is inadequate. I hope the new airline can increase the portion size to perhaps, twice on what we have now. The omelette contains mushroom slices, with baked potatoes and sausage. The cookie is very crunchy, not too sweet and it is made from oats.

There were children on-board our flight that day since it was school holidays. However, I felt a bit unease due to the presence of a crying baby. The parents and the baby were seated at the same row as mine. The infant, for most of the flight kept on crying. I didn't blame the parents. Perhaps, their child couldn't bear the pressure difference that can cause pain in the ear drums. One of the cabin crews was kind enough to give the parents on tips to keep their infant calm throughout the flight, though none that worked.

The Select Entertainment homepage - the same software that is plugged into the airline's B777 fleets since 2005.

Time flies by pretty quick. B777 can fly faster than B737, which makes travel between KUL and BKI faster by 30 minutes.

We began our descent.

The descent was quick. In just about 15 minutes, I could already see Kota Kinabalu's coastline.

It was rather unusual approach style. The pilots aligned the aircraft with the runway at shorter distance than the usual.

Not so smooth touchdown though. I could see local spotters took photos of their big catch!

We quickly exited from runway 02.

It was a clear afternoon at Kota Kinabalu.

I saw MAS's A330 parked at the gate. When nowadays that the airport receives few wide bodies, it is even rarer to see more than one wide body aircraft parked at the same terminal. What is more interesting is that above particular A330 is 9M-MTA, which took me to KUL two days earlier!

We parked at the far end of Terminal 1.


After I took the above photo, an airport staff beside me told that the earthquake caused minor damage at the airport's upper level, with some damage reported at the city. However, he also said the earthquake caused major damages near Mount Kinabalu, close to the earthquake's epicentre. The earthquake was reported to be 5.9 on the Richter scale and occurred at 7.15AM, the largest ever recorded in Malaysia's history. As I write this report, 16 deaths are confirmed with 2 people still missing. All casualties comprise climbers and a mountain guide at Mount Kinabalu. They died due to being crushed by falling rocks and boulders.

Despite the earthquake incident, seems like the passengers were unperturbed. Before we can enter Sabah, we must show our IDs or passports even if you are Malaysian.

That's it folks. Thanks for reading.
See more

--VERDICT--
1) AIRCRAFT CABIN
As mentioned in my previous report, taking a domestic flight on-board a wide body aircraft is always a bonus. I compared the airline's A330 and B777 (strictly based on the airline's hard product offering, not based on aircraft type in general), and found that despite being far older, the B777 has a very spacious legroom in its economy class. With a seat pitch of 34, I can stretch my legs all the way until touching my neighbour's feet in front ( but, of course I don’t do that). The 9 abreast arrangement is certainly far better than 10 abreast that I found on my Emirates B777 flights. The seats are certainly more comfy than the ones on A330. My back ached frequently when sitting inside A330, but on B777 none of that occurred. With the new Malaysia Airlines Berhad coming online starting 1st September, the CEO of the new airline, Christoph Mueller already indicated that Business class on-board Airbus A330 and Boeing 777 would be upgraded, with the aim of achieving higher standards than industry trends. With B777 fast ageing, I am not sure whether upgrading business class make sense, but I hope that the economy class got upgraded as well, though I am keen to see the airline retain the seat design. Yes, the seat design is older, but it is very comfy.

2) ON-BOARD MEAL SERVICE
As I mentioned in my previous report, the meal quality has gone down slowly over the years. I used to get full set of meals like the one I had with Emirates back in January this year, even on domestic flights. But, that went down to being more simpler and contained in a box. During Idris Jala's tenure as CEO, the box design was classier. However, the meal portion is small. I would like it if the portion is increased to twice than it is now.

3) CABIN CREWS
In this particular flight, I found that the cabin crews perform their job accordingly (based on a passenger perspective), like giving out meals, greeting passengers during boarding and bidding farewell. However, I noticed that they are more attentive than the ones in my previous flight. Despite the job-cutting exercise imposed by the airline, it was a job as usual with no noticeable stress when looking at their faces. I feel for them really. I made an effort to say thank you or smiling at them whenever I can so to make them feel happier in their job.

The average flight time is 2 hours and 33 minutes.

Alif A.F. is member of Flight-Report since April 2014.

He wrote 19 reviews about 8 airlines and 11 airports.