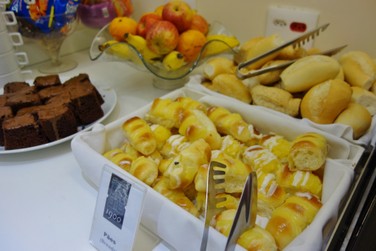 #36 out of 74 Airlines A minimum of 10 flight-reports within the past two years is required to appear in the rankings. 53 reviews

By jetsetpanda 2330
Published on 5th October 2015
Hi and welcome to this side trip FR that I took while in GIG in order to see some friends. I flew back on the same day and my schedule is as follows:

As an aviation enthusiast I am always excited at the prospect of setting foot on a new airline and this was one of those occasions. Azul is an airline with a great reputation inside Brazil and a lot of people think that it is perhaps the best domestic Brazilian carrier. Its success is attributed to its founder Mr. Neeleman who modeled the airline after his first prototype - Jetblue. As a side note, Mr. Neeleman' latest acquisition is TAP - Air Portugal and he promised to keep its home base in Portugal for at least 10 years. AD already has a close partnership with UA and one can book reward seats in J and Y on AD for its North American flights. Presently AD flies to FLL and MCO and plans to add JFK later this year. As the third largest domestic carrier in Brazil it now serves North America and Europe (indirectly through TP). It will be interesting to see how this carrier evolves in the future. When I flew B6 the first time, I thought it was excellent compared to the legacy carriers. Friendly crews, clean and spacious seats, stylish marketing and free unlimited snacks. What is not to like? So with that point of reference I knew more or less what to expect from AD.

What I did not expect was the trouble using Azul's website and how user unfriendly it is. I tried to book my SDU-GRU trip through Azul's U.S. site and after receiving an error has occurred message once I submitted all my information repeatedly, I gave up and called res. The error msg was very vague and did not specify exactly what the problem was. The phone agent confirmed the price and after booking my trip gave me a confirmation number.

A few minutes later I received an email stating that there was a problem processing the payment and to call Customer Service in Brazil with my confirmation number. I called the U.S. toll free number again and the agent went over all the details and resubmitted my credit card information. It seemed that the problem was the exchange rate and my reservation was originally charged in R$ instead of USD. He verified my email address and said that a summary of my trip will be sent while we were on the phone. After telling him that I did not received anything he reassured me that the ticket was issued already and everything was in order.

I called AMEX and they confirmed that an initial charge was made by Azul and was cancelled right after, followed by another that was a few cents more. Is it always this difficult to book with them online when you are based outside of Brazil? After 48 hrs I finally received 3 email confirmations about my trip. I wanted to look up my information online but couldn't find any links on the U.S. site. I found out that there is a way to look at my reservations on Azul's website, but this feature is only available on the Portuguese side.

Once there, there are two ways to access one's reservation, but only one worked for me.

a- Go to Para su Viagem and click Minhas Reservas from the drop down menu. On the right side, click Por codigo de reserva (by booking code) and enter reservation number and last name. Click on ver meus voos. When I tried to access it this way it gave me an error message to the effect that it cannot be changed online.

b- On the home page there is already a link to Minhas Reservas on the left side. Click on it and then enter your booking code and last name. Click on Ver minhas reservas. Once I accessed my reservation details, I was able to get the seat map by clicking on Comprar Espaco Azul button next to my seat assignment.


Day of the trip

I stayed at the Hotel 1900 in the Catete area which is really close to SDU (10 min. by taxi). I called for a cab to take me there and within five min. after placing the call the taxi arrived. I left my breakfast plate half eaten.

Breakfast at the hotel.


After paying R$17 which came to approx. USD 4.23 or EUR 3.85, I went straight to the AD counter to check-in. I tried using the self kiosk but it gave me an error message asking me to select a passenger while I actually did that already. The IT part of AD really needs improvement.


Frustrated by my inability to check in through either the barcode of my printout or by manually inputting the record locator, I went to the counter and an efficient agent checked me in without any problems and issued me the flimsy supermarket receipt (boarding pass). I must comment that there was no agent by the self check in kiosks to assist passengers.

Going through security was pretty straightforward and just as in the U.S, you had to empty your pockets, take off your shoes and place your belt on the conveyor. One thing that I noticed is that in Brazil you are allowed to bring liquid as long as they are sealed in their containers. I had 3 bottle of cologne that I was able to pass without raising an eyebrow. SDU is a small domestic airport that is pleasant and prettier than GIG airport.

One thing that I hated about this airport are the WC's. Some of the urinals did not flush and because of the old plumbing system most toilets cannot handle toilet paper disposal, so a basket is placed next to them. There are people that are so filthy that they just toss their soiled papers after use without even folding exposing their s#@t for the next occupant. Utterly disgusting. I don't think you need pictures as proof in this instance and can just trust me on this. :P

Moving on to more pleasant subjects, SDU airport is nice for spotting because the gates have a view of the tarmac with all the planes' activities. Unfortunately the windows need a good cleaning as they look dirty.


There were about 3-4 agents at the gate and when we were ready to board, passengers were placed in rows according to their group numbers, with top members of Tudo Azul program at the far right boarding first. You had to show ID and the boarding receipt one more time upon boarding. The efficient agent addressed me by name and invited me to board after checking my documents.


Plane at the gate.


A FA was at the door greeting passengers and I walked all the way down to my seat in the last row. I noticed that the overhead bins of the last few rows were reserved for company use.


There was only a safety card in my seat pocket. I saw that my neighbor's seat had a disposal bag for sickness.


The safety demonstration was conducted in Portuguese only and soon we were ready to taxi out.


I was looking forward to this trip since the take off from SDU is supposed to be one of the most impressive ones in the world. Unfortunately the weather did not cooperate and it was dark and rainy. I will have to do this again in the future.


There were 3 FA's who looked well groomed and professional with a smiling demeanor. I would say that in Brazil looks play a more determining role in getting hired as a FA compared to the U.S.

A FA took drink orders and delivered them individually from a tray. There are no beverage carts used on AD. This was followed by another FA offering a selection of snacks from a basket. You could order as many of those as you wanted. Once she ran out of a certain item, she proceeded to open a new one stored in the overhead bins at the end of the plane. There were maybe 4 of these baskets placed in the bins.

I ordered polvilho (similar to cheese puffs but made with tapioca flour from cassava root), Japanese peanuts and peach juice.


Later on a FA offered already sweetened small cups of coffee from a tray.


Soon we were descending into GRU on a wintry and cold day.


GRU receives the bulk of intl. flights to Brazil.


We parked at T4 which is a separate domestic terminal used by AD and 2Z (Passaredo). We parked at the tarmac and used stairs to descend from the plane. Great for spotting.

With the exception of the disappointing experience with AD's website, I had a good flight with this carrier.

Cabin was clean but the lack of an inflight magazine and sickness bag in my seat pocket was a let down. The 2x2 configuration of the Embraer is always a nice feature and makes flying more tolerable.

FA's were efficient and professional. They place strong emphasis on how they present themselves.

A choice of snacks is very generous, especially for such a short flight. There was a nice mix of salty and sweet items to satisfy everyone's taste.

The airline with the best average rating is Azul with 8.1/10.