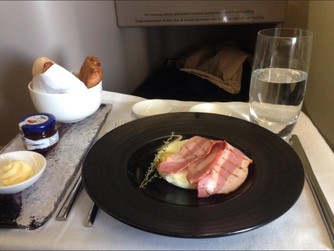 By Razza_Pr 5155
Published on 15th December 2015
I started out my morning on a flight from LHR to AMS on KL1002 (report here: http://flight-report.com/en/report-12476.html ). An I was connecting in AMS for a flight with their fellow SkyTeam member, Garuda Indonesia. I got 2 different bookings (one for KLM and another for Garuda) and was told that I need not leave the airside to retrieve my baggage and do another check-in, yet I simply needed to contact a Garuda Indonesia ground staff to ensure my baggage will get onboard the next flight, which is exactly what I did and why I did not spend any of my time going to the KLM Crown Lounge. Rather, I was drinking Starbucks to up my dose of caffeine as I needed the energy boost after starting out early.

About an hour prior to scheduled boarding time, I approached the friendly, smiling lady who worked as Garuda's ground crew as she was going to the gate and informed to her about the assistance I requested. Immediately she dealt with my request in a friendly and professional manner.

Everyone else started to appear on the gate F7 as the scheduled boarding time approaches. However, due to 'technical issues with Schiphol', boarding was delayed until 16:30 CET. I took partial blame for this, as it may have been caused because of my baggage issue. But it really could've been because of something else I know nothing of. I'm hoping it was the latter. But hey, at least the flight actually departed. I heard 2 cancelled flight announcements. One of Thai Airways (I think) and one of Singapore Airlines.

Oh yeah, after I booked my tickets for this flight, I chose my own seat (9K) because I know if I choose a window seat on row 9, I will get to see this beautiful thing:


Isn't it a lovely view?

Welcome drinks were offered immediately by flight attendants who addressed me by name. Whilst they went away to start preparing and serving the welcome drinks and hot towels, the ground crew from earlier had approached me to inform me that I can be sure that my baggage is already on board, to my delight. After a profound thank you from me, she left the aircraft.

A flight attendant then came to my seat to bring me my welcome drink and scented hot towel. I love how Garuda Indonesia flight attendants bring trays with them to bring your food and beverage to your seat as opposed to pushing a trolley from the galley. It feels more personal and upmarket. Magazines were offered during the welcome drinks service (if memory serves correctly, options included but aren't limited to TIME Magazine, and National Geographic. Unfortunately for me, no US Vogue).

During taxi, the flight attendants picked up all the finished drinks and used towels. Then, one came up from the galley to begin writing down orders for drinks after takeoff and meal services from dinner to breakfast. Again, I was addressed by name by the friendly attendant.

After she left to take others' orders, I decided to take some more photos.


Welcome on board screen on my seat

Starry-night ceiling feature. Accompanied by mood lighting to simulate sunset but unfortunately I took no photos of that.

After takeoff, amuse-bouches were distributed to the passengers. I requested water to go along with it, and hot chocolate to go with my dinner later.

For dinner, you're offered 3 options for a 4-course meal. Options include Indonesian, Modern European, and Japanese.


Macadamia and almond nuts in one saucer, and that thing I don't know the name of but tasted pretty good, in a small plate.


Chef's cheese platter. Camembert and cheddar. The cheddar fell short in my opinion, but the camembert tasted good. I wasn't in the mood for liquor, so I had water instead of wine. Did I mention their water bottles on board are Evian? Yeah, it's a big deal for some people out there.


Dessert. Vanilla ice cream with strawberry syrup. Tasted great but I wished there was a chocolate stick or two to go along with it.

By the time dinner service was done, it was already 00:50 at the timezone of my end destination. So I opted to go to sleep after having (another) cup of hot cocoa.

After about 4 hours of sleep, I was no longer in European airspace. I browsed through the menu and called a flight attendant to ask for a plate of Nasi Goreng to be served with a glass of milk to go with it.


In-between fuel. Round 1, Nasi Goreng with slices of chicken.


To go with the Nasi Goreng, the flight attendant who served it to me kindly recommended that I have some Rempeyek crackers to go with it. Go on and Google it, it was some good stuff.

After the Nasi Goreng, I decided to turn on my IFE and browse through it. Funny thing is, I remember flying PK-GIE from Amsterdam to Gatwick not too long ago and I clearly remembered it had more movies listed on the programme. This was PK-GIA (an older 777). Did they not update their IFE fleet-wide? How come younger aircrafts have a longer list of movies compared to an older one? This one they need to fix, but I still liked the design as it was easy to navigate through, however not as easy as that of neighbouring rival Singapore Airlines or the benchmark set by Emirates.


In-between fuel. Round 2, Nachos with cheese + another glass of milk. In the background I was watching Dragon Blade.

After I finished watching the movie, I had a long sleep until about an hour before breakfast services start. Yes. Their seats are convenient enough for me to sleep that long. Unfortunately, I made the stupid mistake of procrastination. I had intended to take photos of the inflight menu, however I kept telling myself 'just do it later. You're tired now and you should just get some rest like everyone else.' I was watching live news on board from BBC World News.

An hour later, breakfast service begins. You're offered 3 options between Indonesian, Japanese, or Modern European for your three-course breakfast

For starters. Assorted breakfast rolls with butter and jam. Bircher Muesli. And of course, a glass of milk. Tasted nice


Dessert. Fruits with vanilla cream. It was really quite nice

We were already in Indonesian airspace, above Sumatra. Local time was about 11 AM after I finished breakfast


See? It's beautiful. I'm not referring to the clouds, though.

We touched down at CGK around 12:20 WIB. Barely anyone else was there when I went through immigration.

Oh, and here's the crème de la crème after a nice flight experience:


Premium Arrival Service. Available to GarudaMiles member on Gold tier upwards, and of course to Business & First Class passengers. You get to sit on the arrival lounge, maybe freshen up and take a shower, or have some drinks whilst a staff member goes to retrieve your luggage for you.

Overall, it was really nice. They really earned the 'World's Best Cabin Crew' award from Skytrax. Looking forward to my next flight with them.
See more

The contributors of Flight-Report published 8 reviews of 1 airlines on the route Amsterdam (AMS) → Jakarta (CGK).

The airline with the best average rating is Garuda Indonesia with 8.1/10.

The average flight time is 13 hours and 53 minutes.