#19 out of 71 Airlines A minimum of 10 flight-reports within the past two years is required to appear in the rankings. 5354 reviews

By _cbravo 594
Published on 16th May 2016
Introduction
This flight was part of a bigger trip. Day trip. I started off in Frankfurt and wanted to see Hamburg again. I booked a Germanwings flight there from CGN (to which I got by train, but that's a whole other catastrophic story). Then I (obviously) wanted to get home again. After I found out that the train tickets were really expensive, I began looking for options. And I found this flight. In combination with my CDG-FRA flight later that day, that was cheaper than going by train… Anyway, let's begin with the experience!

Getting to the Airport
I started off in Hamburg, which is (in my humble opinion) the most beautiful city in Germany.

I then continued to the airport with the S-Bahn S1, which is basically part of an upscaled Metro system. Upon arrival, I followed the signage to Terminal 1, out of which my flight would be departing. I then jumped into the elevator towards 'departures'. Turns out that all of this was unnecessary because Hamburg handles every departure through the same security checkpoint. I could've easily saved a few minutes if I had known that. Anyway, the security screening process was very fast and the employees were very friendly, I joked with one of them. For the screening itself, they used the new body scanners, which I prefer. I then got my cabin bag and off I went to my gate.

Hamburg Airport
I did depart from Hamburg a few times in the past (Check my Flightdiary Profile) so I expected nothing special. After I got an overpriced sandwich (what did I expect?) at some fancy bar in the departures area, I proceeded towards my assigned departure gate. Throughout my whole experience at HAM, I noticed that the large windows contributed to a better experience, it was very bright throughout the whole building. After a few minutes of walking, I couldn't help but notice that my gate was not on the level I was currently on. Instead, a sign directed my down a flight of stairs into an area that I've been unaware of before. I discovered HAM's bus gates. The large windows provided a great apron view:

Boarding and Departure
I took the photo at 14:29, 6 minutes before the scheduled boarding time. Very shortly after that, the boarding announcement was made. I was pleasantly surprised to find that, after Germanwings had a delay of approx. 40 minutes at the time of boarding, the 'embarquement' for this flight actually began ahead of schedule! My boarding pass was then scanned and I proceeded on to the bus. Now the bus itself was the first unpleasant experience that I had on that day. It was old, quite dirty and the A/C wasn't working properly (if at all). Anyway, on I went on a short tour over HAM's apron as I approached my ship for the day, F-GUGO: one of only 69 A318s that are in operation worldwide. Following a short wait on the bus, I was let onto the apron to board the aircraft.

Now, my seat:
I chose seat 23A simply because Air France offers no possibility to reserve seats in advance. Additionally, at the time of check-in, passengers are automatically checked in and therefore the only two consecutive rows which had a window seat to offer were seat 22A (for my companion) & 23A (for me)… Anyway, the A318 is not a very long aircraft at all so the view wasn't too bad: 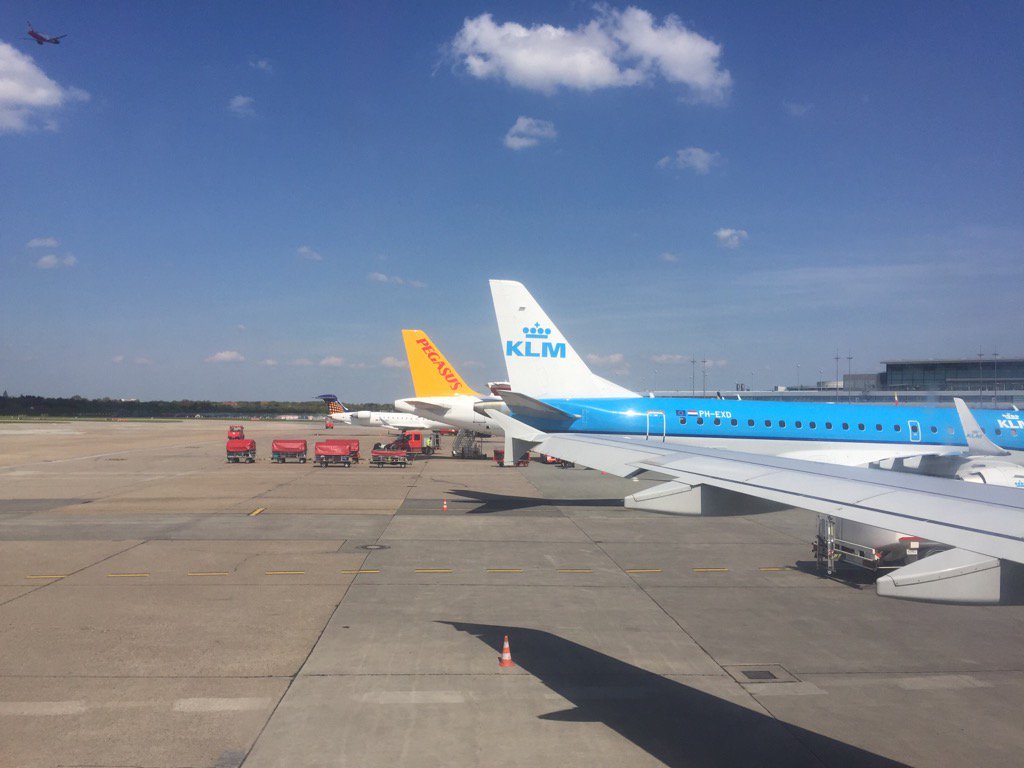 The cabin crew was very friendly, although they didn't always wear the obligatory smile. I politely asked whether I could use my cell phone in flight mode (because the announcement suggested otherwise), but they were okay with it.
For the cabin, my first impression was that it looked quite elegant and as soon as I sat down, I noticed that the legroom was just excellent. I'm 6'2" (185cm) and I could almost stretch out my legs. All in all, the seat was extremely comfortable, I could well withstand a few hours in this machine. We went off-block exactly on time at 15:05 and departed shortly after. 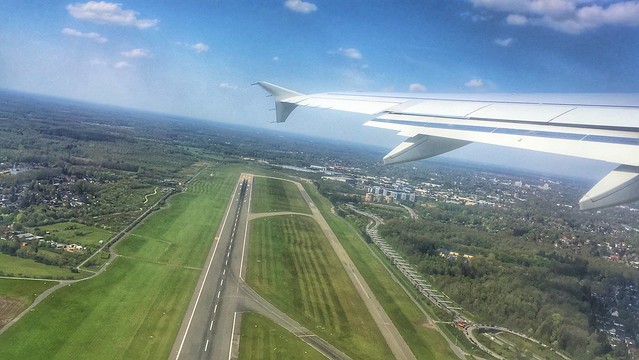 The Flight
The departure itself was quite bumpy, up to about 13000ft. Then, the air was very calm. Due to the skies being clear above France & Germany that day, I spent most of the time looking out my window trying to spot cities on this 80 minute flight. Some more time, I was chatting with an extremely nice woman two seats next to me, the middle seat and the row behind me were completely unoccupied. She was connecting to a flight to La Réunion (RUN), a seemingly popular destination next to Madagascar, with 5 daily flights out of Paris (CDG & ORY). At some point, I began reading some of the magazines and newspapers that I've downloaded for free through an Air France app. But as far as entertainment goes, that was it. (Aside from an onboard magazine obviously but that was mostly advertisements anyway.) Soon, the flight attendants began to hand out a snack and a drink. The snack was a small nut cake (?) and it was just delicious. As I didn't expect much from such a short flight, that was a pleasant surprise. It seemed like there was any one drink available that you could possibly imagine. However, I went with a Coke which I always do on my flights. The photo was taken by a friend that was traveling with me that day, that's why you'll find Perrier instead of the Coke that I mentioned.

Other than that, there wasn't much happening until we started our descend towards Paris CDG. Some more photos:

The great view of Hamburg upon departure. You can also spot XFW with the Airbus plant:

Even CGN, where I started my day earlier, was (faintly) visible:

Approach & Landing
The flight was over pretty quickly. They announced that we would begin our descend into Paris CDG and so we did. It was getting bumpy again on a lower altitude (about 7000ft) but I thought it was quite fun. I believe to this day that I was the only one on that plane thinking positively about that.
Fast forward. Touchdown. 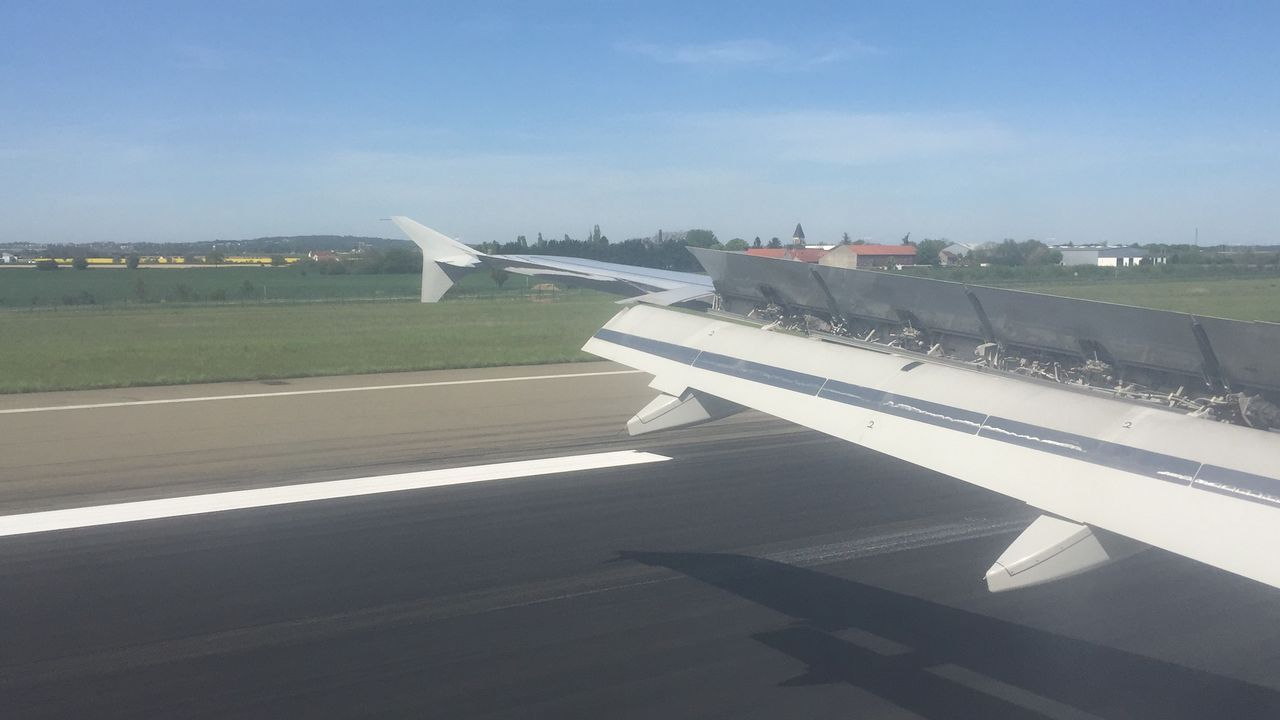 Well, the landing wasn't too bad considering the weather conditions.

Paris' CDG Airport
Taxiing takes hell of a long time at this airport. Anyway, as soon as the flight reached it's gate, deboarding began pretty quickly. I used my very best bit of French to tell them 'Merci, au revoir' ;-)
I then went on to passport control (which is necessary although I've flown inside Schengen due to the horrible attacks on Paris in November). They were not friendly but very fast. Then, I embraced my four hour layover in Terminal 2F. CDG itself is a great airport, although the huge windows in Teriminal 2F meant having to bear hot and oxygen-free air. But that's it for this report.

Thanks to my friend "EDDFSpotting" for supplying me with the cabin & catering pictures!
See more

I can only recommend Air France, regardless of the low fare that I paid. The flight was great. We were on time, with lots of legroom and a friendly cabin crew. The whole experience was better than anything I've ever had on Lufthansa, even though there were no non-print-media entertainment options. HAM & CDG are two great airports with awesome staff. All in all, there is no big component of this flight that wasn't great!

The contributors of Flight-Report published 14 reviews of 3 airlines on the route Hamburg (HAM) → Paris (CDG).

The average flight time is 1 hours and 34 minutes.