For my first report on this site, I'll cover a recent trip out to the Bay Area of California.

You can find the second flight of this trip here.

I found a great deal for an award ticket (miles + cash) out of Ithaca and booked the ticket about 10 days out. I got dropped off at the airport at about 5:00 for our 6:15 departure, which ended up being more than enough time, as anyone who has flown out of a smaller airport will probably know.

I grabbed my boarding passes for the day from a kiosk, then proceeded to join three other people in the line for security, getting through in less than five minutes. There were actually quite a few people in the gate area, as there are three flights in the early morning at Ithaca: United Dash-8 to EWR, American Dash-8 to PHL, and the Delta CRJ to DTW.

After the 5:45 American flight had departed, it was time for the Delta flight to board. This was an interesting experience. The boarding process goes something like this: people needing extra time, then active-duty military and Delta status holders, then zone 1, then zone 2. However this morning, there wasn't a single passenger who boarded before zone 2 was called, so I ended up being one of the first to board the plane.

After getting my boarding pass scanned, I walked up the ramp into the single jet bridge in Ithaca, storing my larger carry on bag on the baggage elevator to the right of the bridge. After squeezing myself into seat 4A, my seatmate appeared and sat down in 4B. Luckily for me, the flight was only half full this morning, and my seatmate ended up moving into an empty row. Excellent. Unfortunately for my 6'4" self (193 cm), being based in Central New York means lots of CRJ flying. This was one of the lucky times where I can actually breathe a bit.

Experience has taught me that on morning flights out of Ithaca, you need to get a window seat on the left of the cabin. With calm winds being the norm in the early mornings, takeoffs are generally on runway 32 offering a fantastic view of Cayuga lake and downtown Ithaca. This was the case on this morning as well: 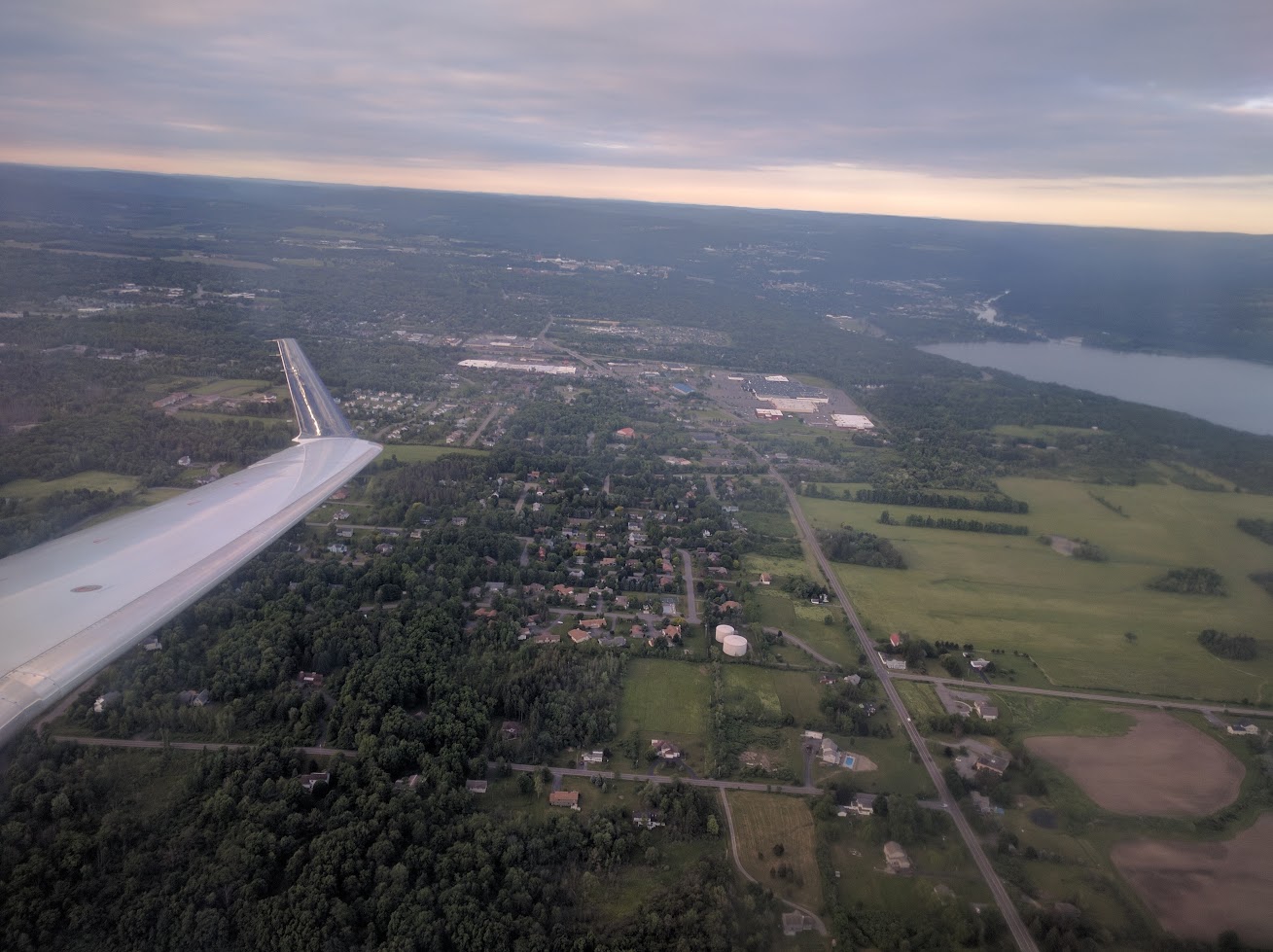 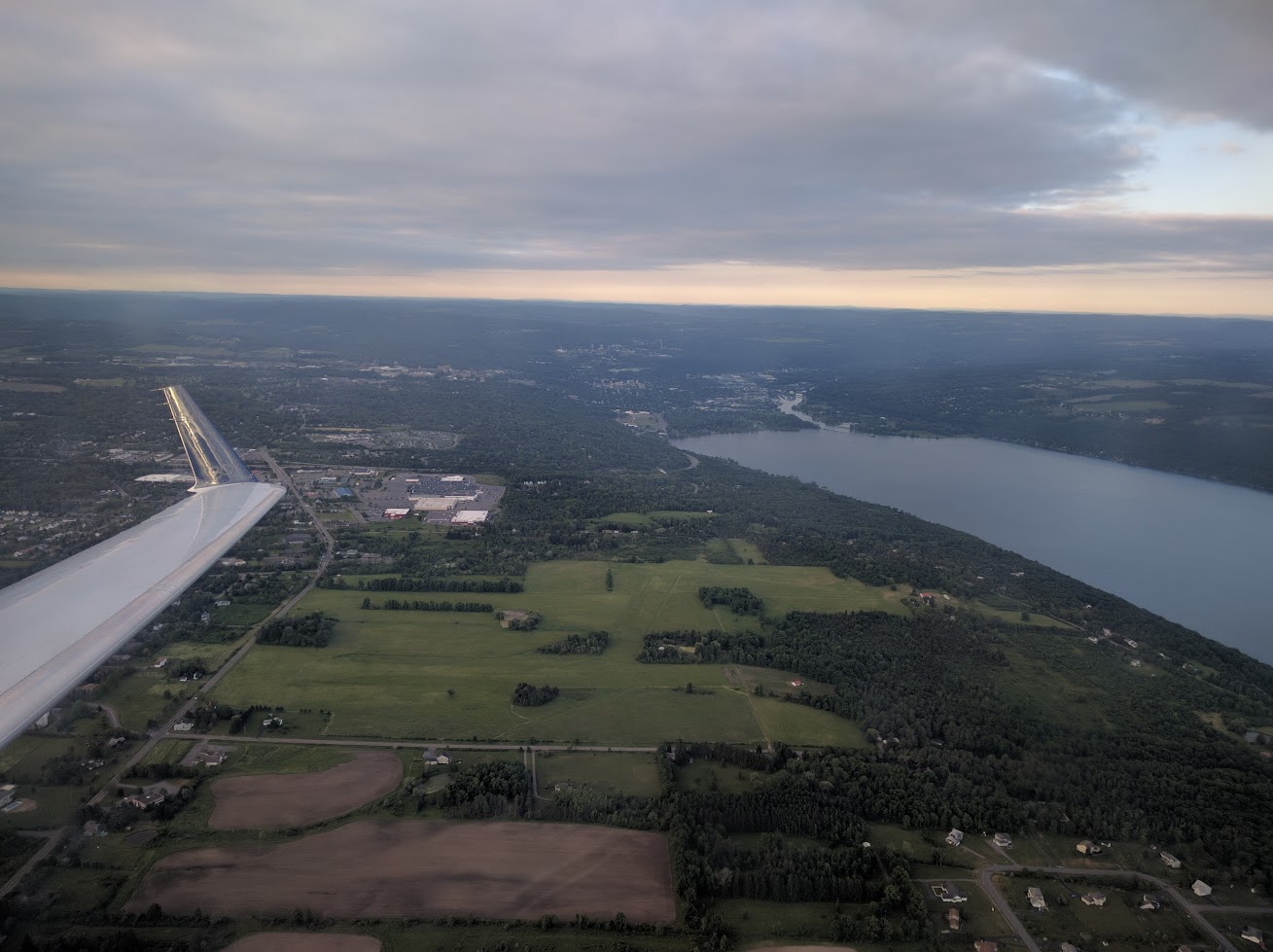 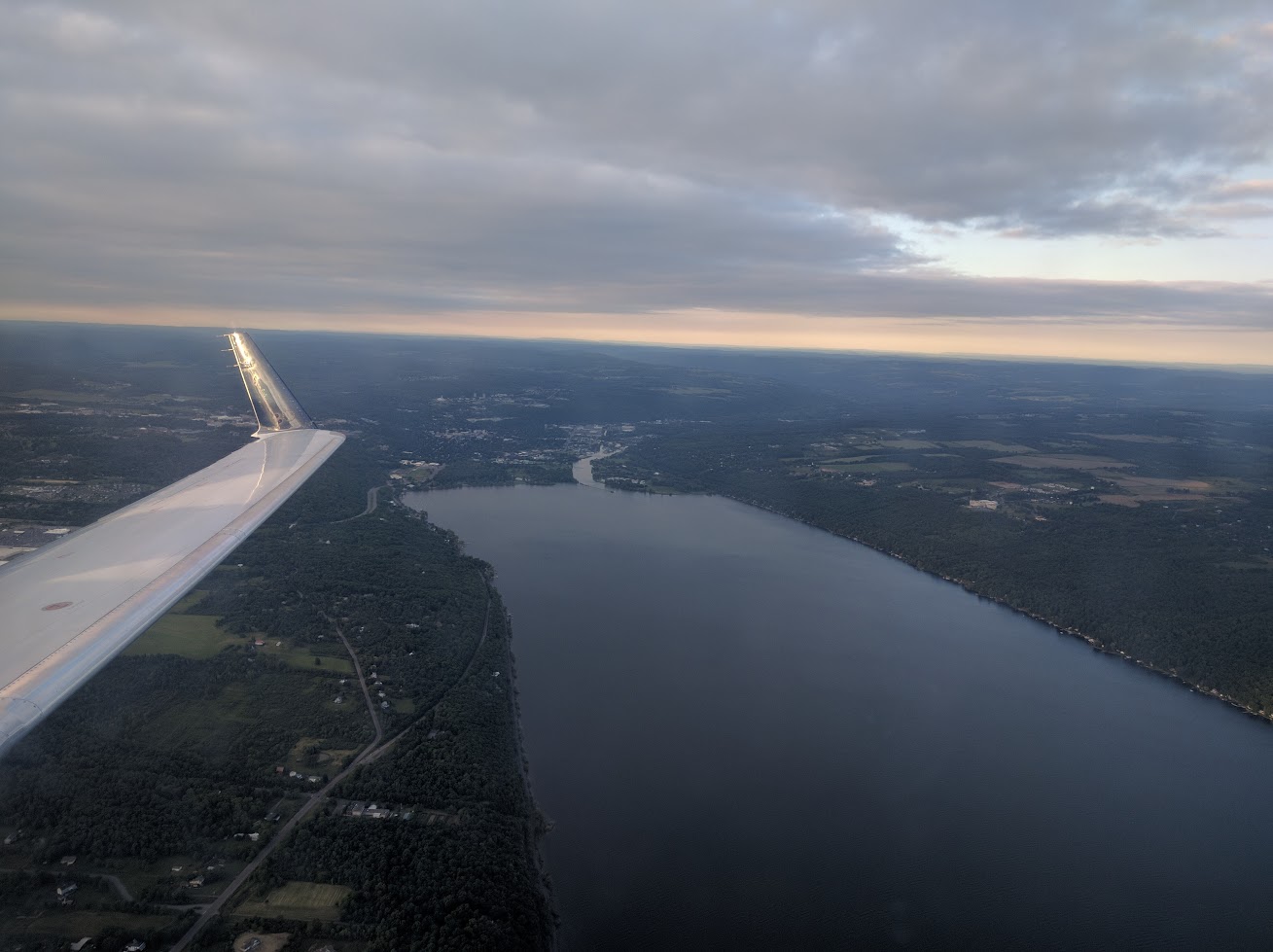 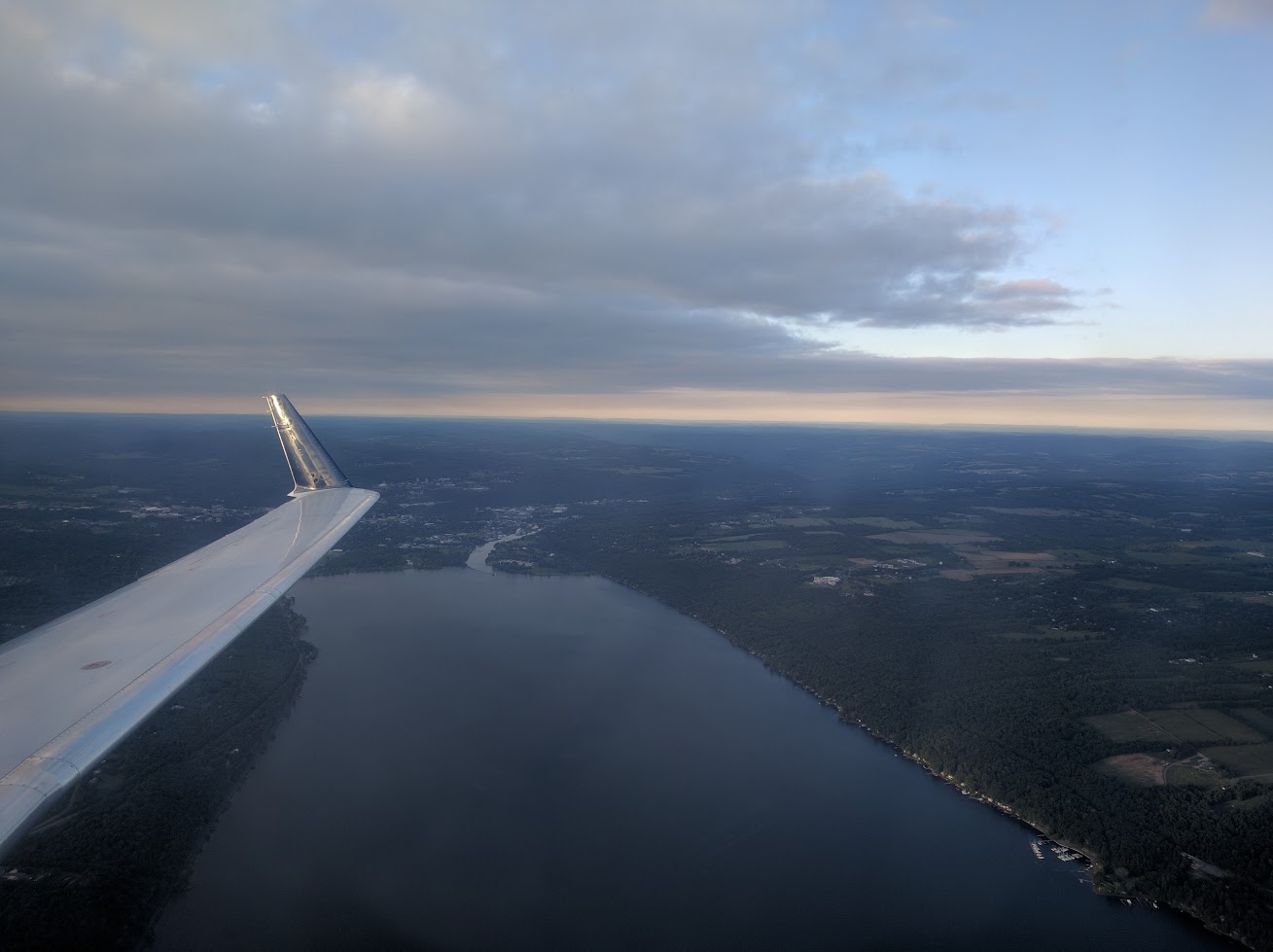 Another bonus of having a left-side window seat is that you get a great view of the rest of the Finger Lakes. Keuka lake: 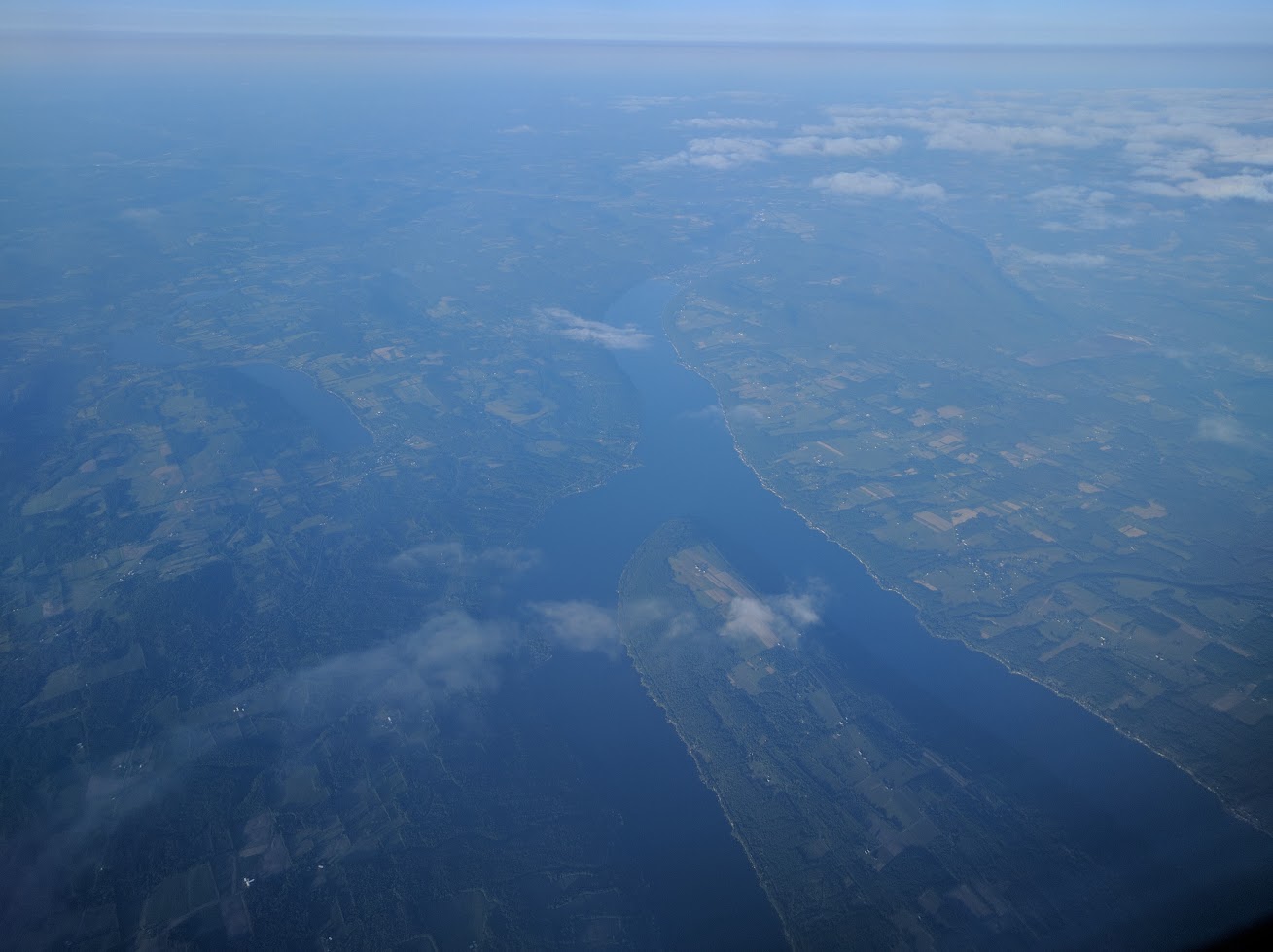 The friendly flight attendant came through with the drink cart and I got a coffee. This cup in particular was far and away the best coffee I've had on a plane. I was pleasantly surprised, especially considering this was on a 15 year old CRJ. 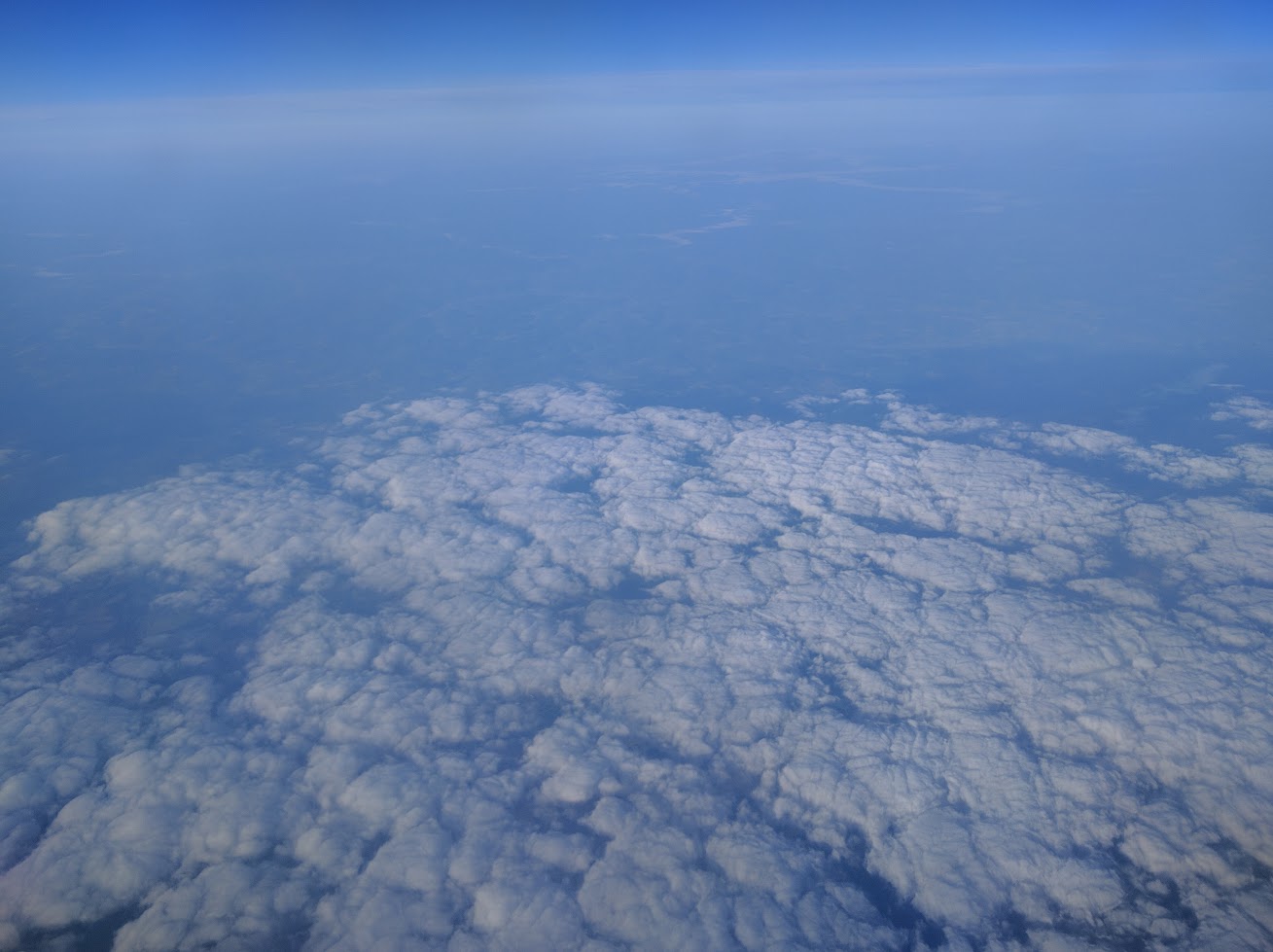 We landed on runway 21L and taxied to gate A53. This was the first time I've seen a flight from Ithaca park at an A concourse gate at DTW, which was nice as I only had about 45 minutes to get to my SFO flight down the concourse. After deplaning, I stopped right outside the aircraft to wait for my pink-tagged bag, assuming that since this was an A gate it didn't have an elevator for the larger carry on bags. I was the first one there, and everyone else lined up behind me. However, after waiting for several minutes, one of the pilots noticed us all gathered there and came out to check. Apparently since the last time I have used A53, an elevator was added around the corner in the jetway. Oops, sorry everyone. We all made it to the elevator just as an agent was opening the door, so no time lost.

Overall, this has to be up there with my favorite CRJ flights ever. The light load made it much more comfortable for me, the flight attendant was great, and the coffee was especially great.