#64 out of 142 Airlines A minimum of 20 Flight-Reports is required in order to appear in the rankings. 665 reviews

By Menzenski 1360
Published on 4th October 2016
Hello and welcome to another flight report! This report will cover a trip I took with eight other people to a conference near San Francisco.

Background: Since we were travelling in a large group, I didn't have any say in the booking process, though I was pleased when the itinerary appeared in my email. We'd all be flying Delta through Detroit on an ELM-DTW-SFO routing Thursday evening, and SFO-DTW-ELM red eye back east Saturday night into Sunday. Both of the SFO flights were to be operated by Delta's domestic 767-300s, which are a very comfortable ride.

Story (Short-ish version): However, our first flight of the day was delayed by two hours, meaning we would miss the last DTW-SFO flight of the night. Somehow all nine of us managed to get rebooked on other flights, five of us out of Binghamton (BGM) through DTW, and the other four (myself included) out of Syracuse (SYR) through JFK. Half way to Syracuse, however, our flight to JFK was cancelled due to weather around the NYC area. Delta had rebooked the four of us on the first flight out the next morning, but that would mean missing a big chunk of the conference to which we were travelling. We weighed the idea of just cancelling our tickets but I convinced the group to at least get to the airport to speak with an agent in person.

We arrived at the Delta check-in counters in Syracuse at about 5:10pm, reaching an agent a few minutes later. The agent immediately said that there were three available seats on the 6:00pm flight to Atlanta. After quickly deciding who would be the odd person out if no standby passengers were cleared onto the Atlanta-bound MD-88, we rushed off to the security checkpoint right as boarding was due to begin. Luckily, the security checkpoint in Syracuse is not very busy around 5:30pm, and we all were quickly through. After a few tense minutes near the gate as we all waited for seat assignments (the check-in agent was not able to assign any seats, even for the confirmed ones), we all made it aboard the MD-88. I was even assigned my favorite seat on the Delta MD-88, seat 33A. 33A is the window seat immediately behind the rear exit door, and lacks a seat in front. 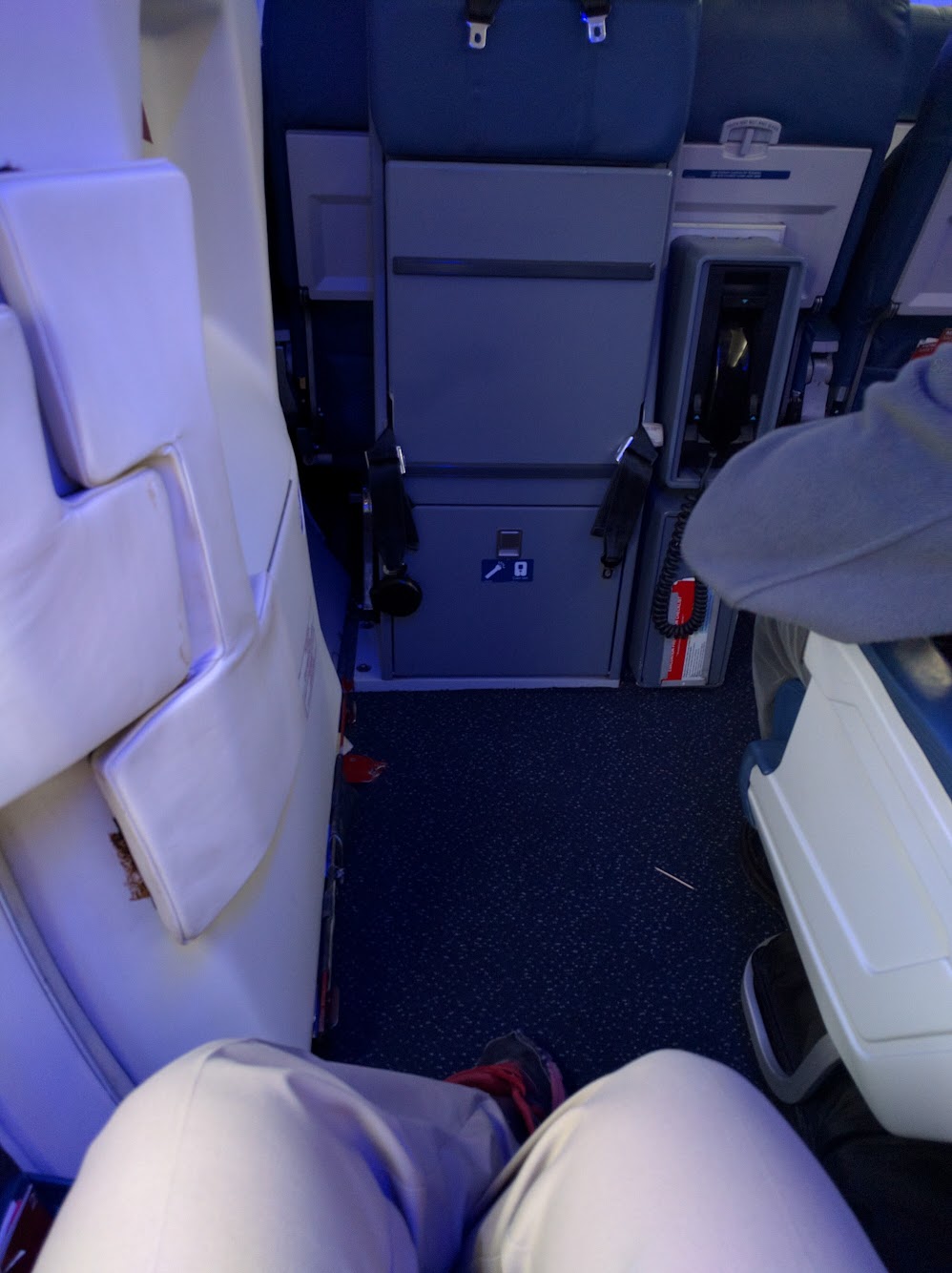 The view from 33A with an American A319 about to depart to CLT and a CRJ-700 arriving from ORD. 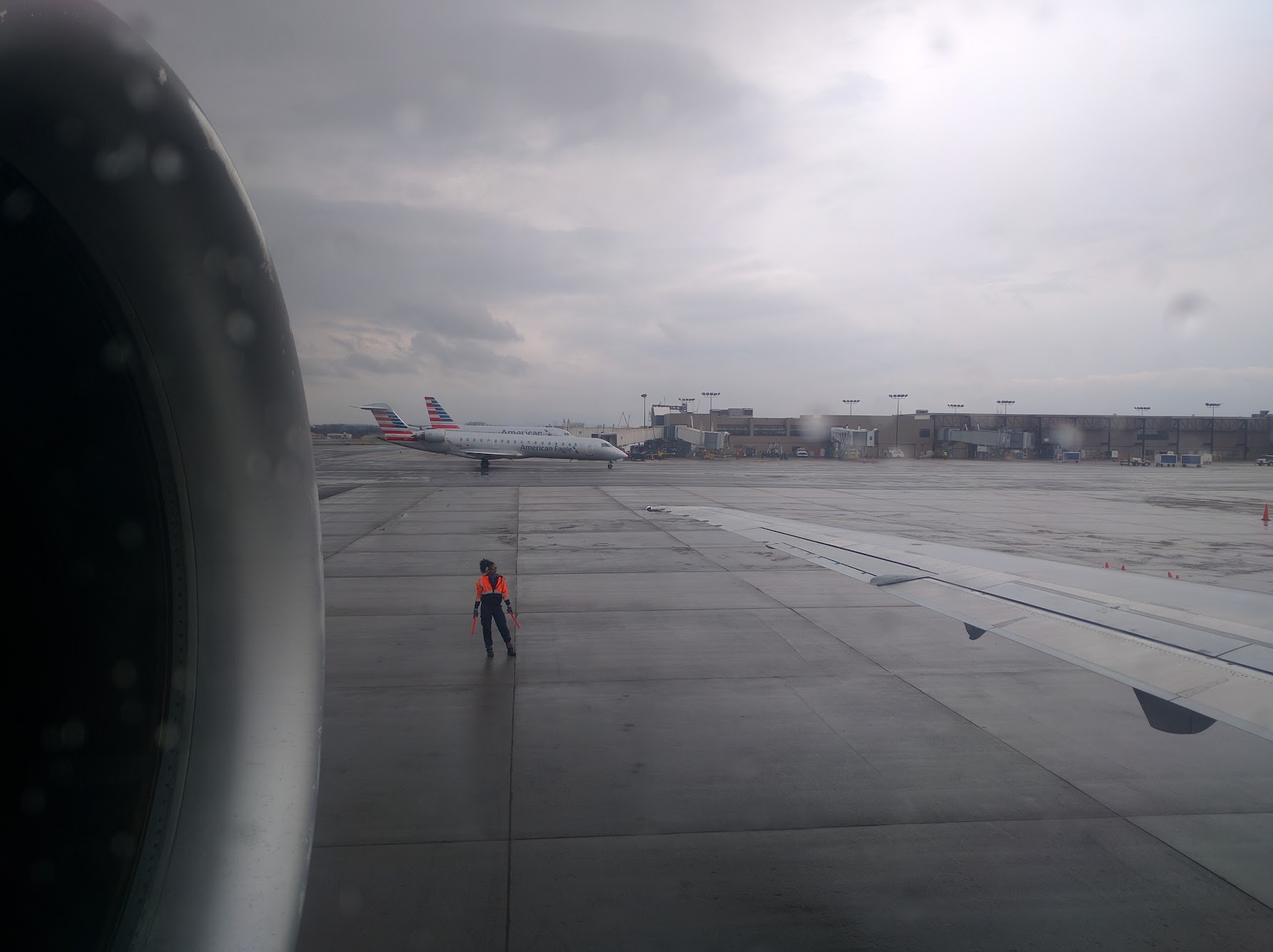 The flight down to Atlanta was uneventful. This was my first time connecting in Atlanta, and I was surprised at how far south it is compared to Upstate New York. That day I was expecting a 45 minute flight to Detroit, then a 5 hour flight to San Francisco. However, I ended up flying 2 hours and 20 minutes to Atlanta, then 5 hours and 15 minutes to San Francisco. That extra 90 minutes of flight time was very noticeable for some reason.

We arrived into Atlanta at 8:10pm, just after sunset. However, that lead to some nice lighting on the clouds as we approached Atlanta. 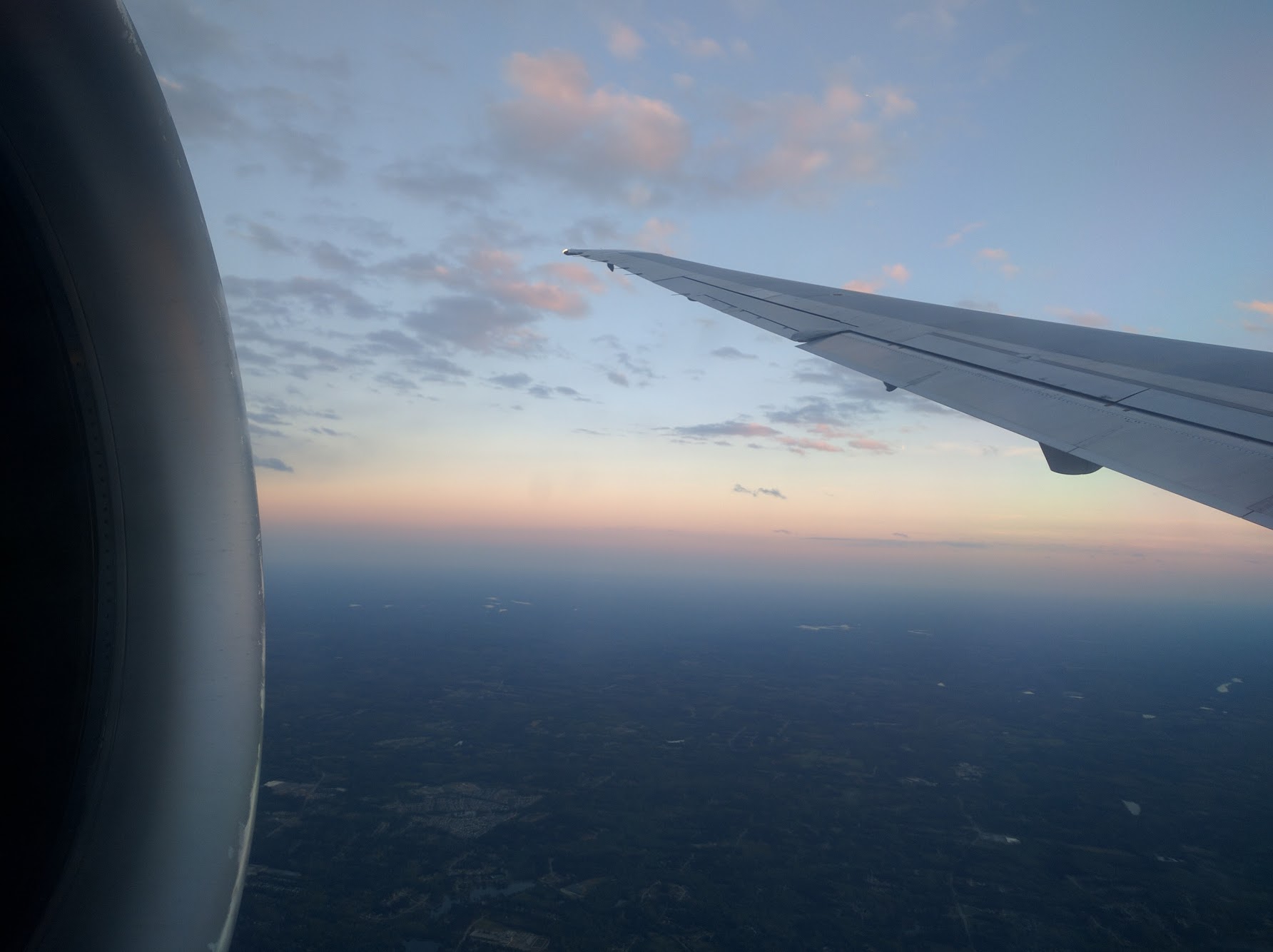 We arrived into Concourse B at gate B16. Our flight to San Francisco would be leaving out of A24 - meaning we had a chance to stretch out a bit walking through the tunnel to A. Our flight to San Francisco would be a bit of a rarity in the United States, a west-bound red eye – after all, we'd be departing well after 10:00pm Eastern time, and arriving after 3:00am Eastern time (basically the same as east-bound red eyes, 10pm - 3am west coast time), but we'd have the advantage of getting a full-night of sleep after the flight. 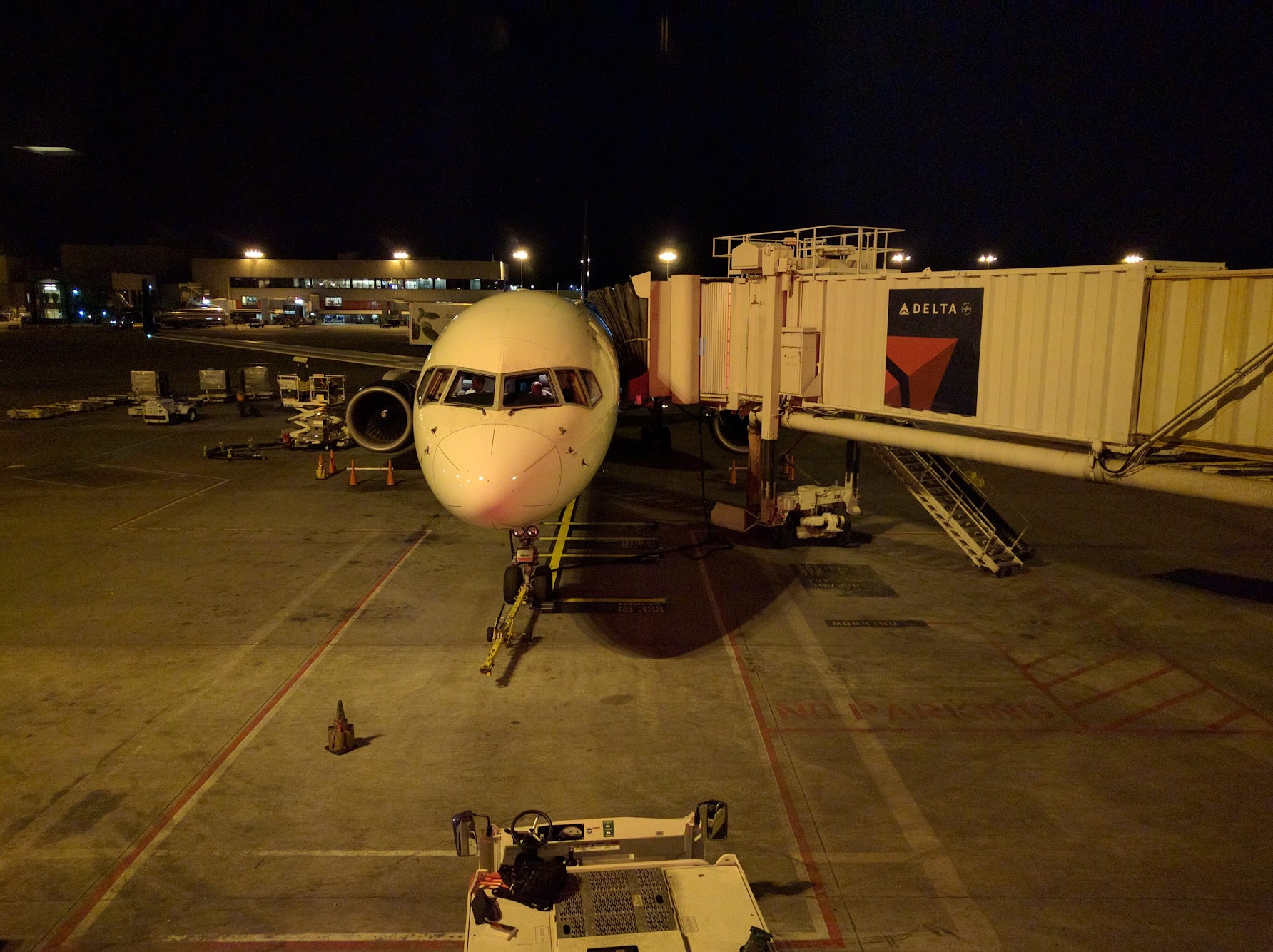 After getting some dinner at one of the many eateries Atlanta airport has to offer, we all went to sit near the gate. I then noticed why the agent in Syracuse had been so confident about us all making on the ATL-SFO flight that night. The overhead screens in the gate area were showing the upgrade list for the flight, including the number of open seats in each cabin. Tonight, there were more than 120 empty seats on the flight – barely a 50% load factor! This was a huge improvement for me especially, as earlier in the day I was scheduled to be sitting in a middle seat on a packed six-hour flight from JFK-SFO.

Boarding began on time, and was quickly completed. The economy section was fairly full towards the front of the cabin, with almost all middle seats empty. I took my seat in row 37 and was pleased to see that the other five seats in the row remained empty. In the very rear of the cabin, between the last two sets of doors, there were only seven people in nine rows.

I was immediately struck by how nice the cabin was. The seats were fairly new and had very nice IFE systems. The mood lighting was pleasant and not overbearing (as an aside, I haven't yet seen a picture on the internet that accurately captures the shade of blue. My pictures below are the closest I've seen. It is actually quite pleasing, especially during the night.) and on every seat was a pillow and blanket. The added IFE feature of live TV was particularly useful on this flight, which occurred during a very big basketball game involving the Golden State Warriors and the San Antonio Spurs. I could clearly tell during the flight that nearly all of the PTVs were tuned to that channel. 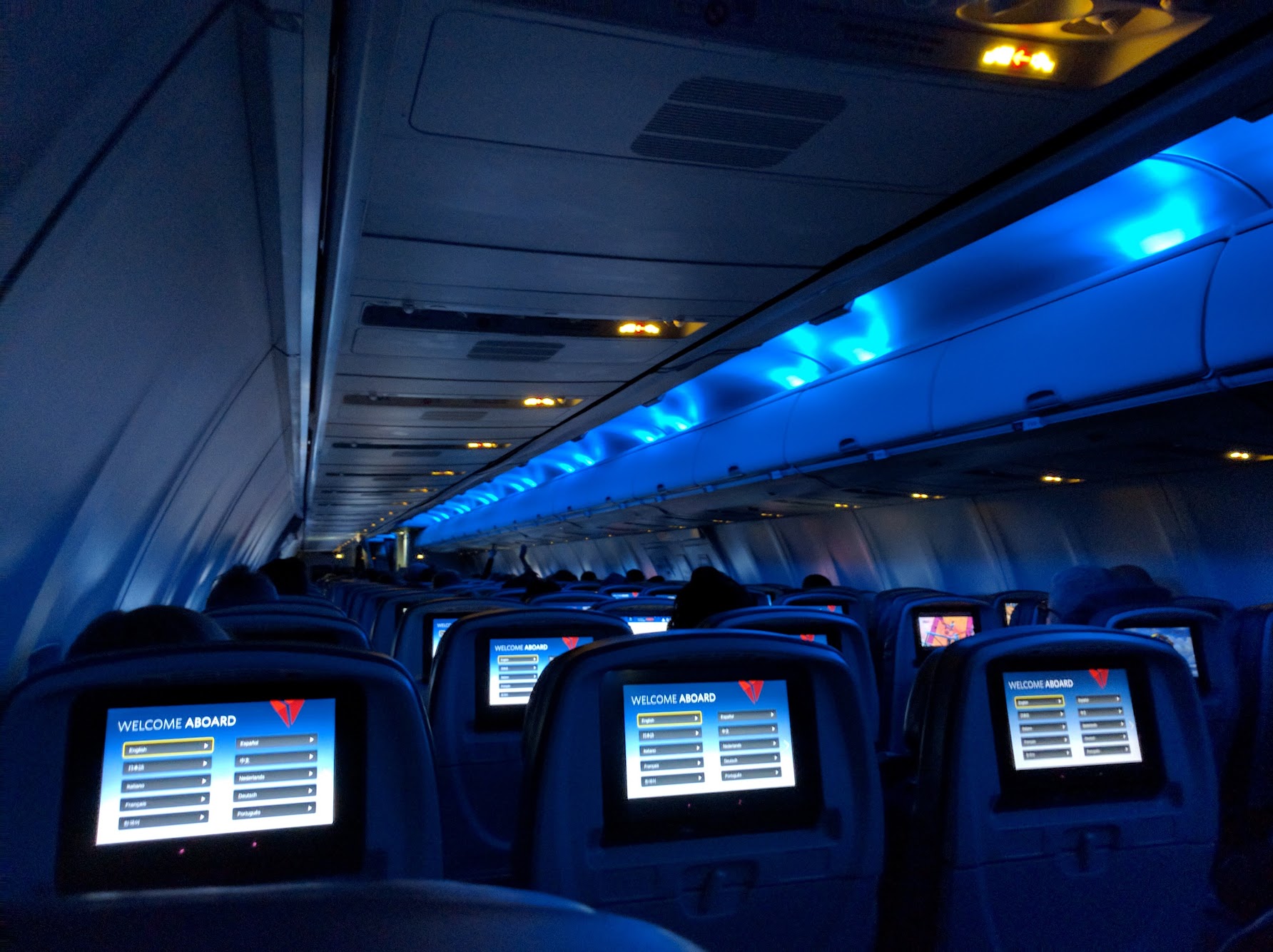 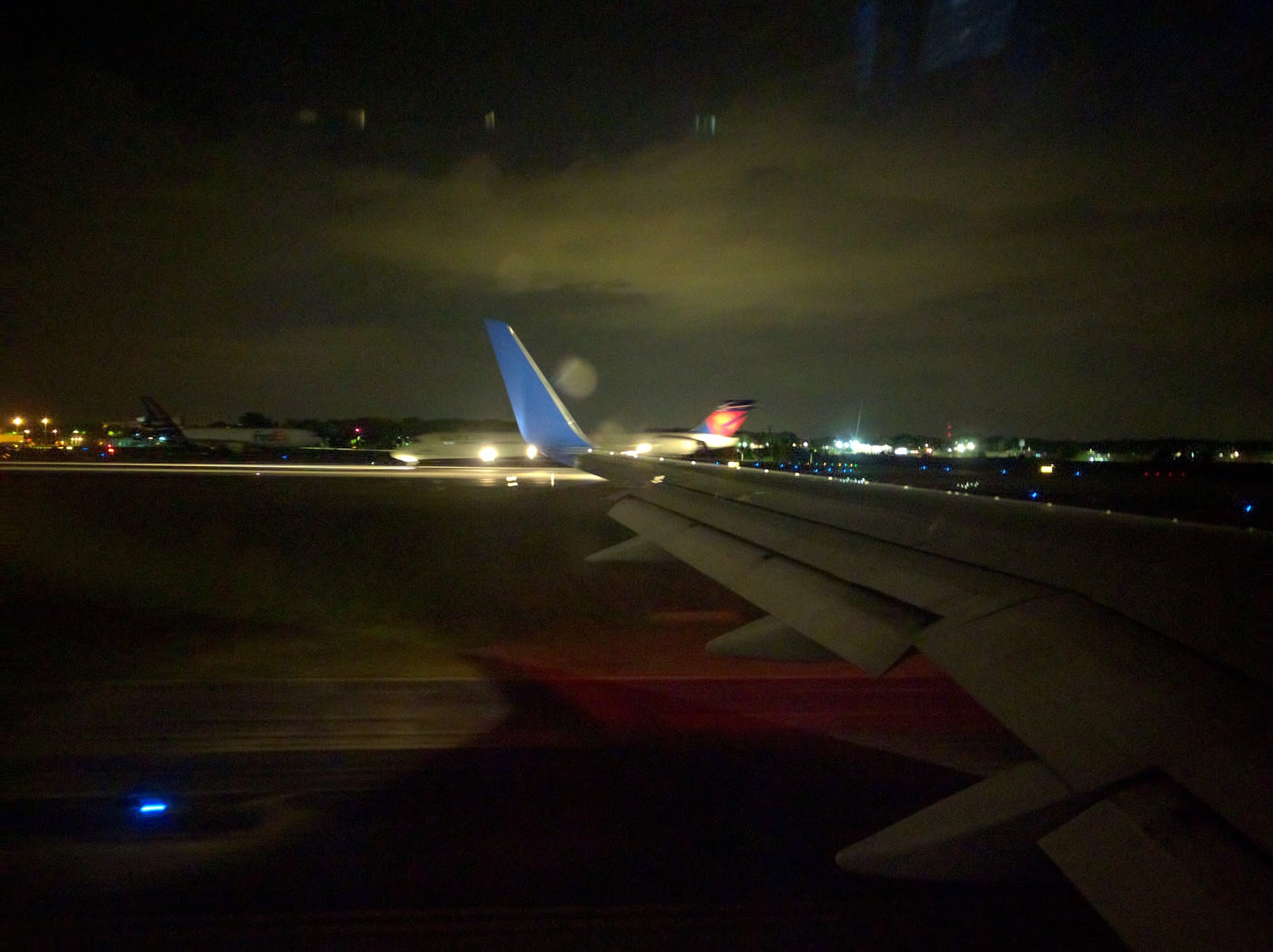 Our takeoff was extremely powerful and we were well into our climb before passing Concourse E. 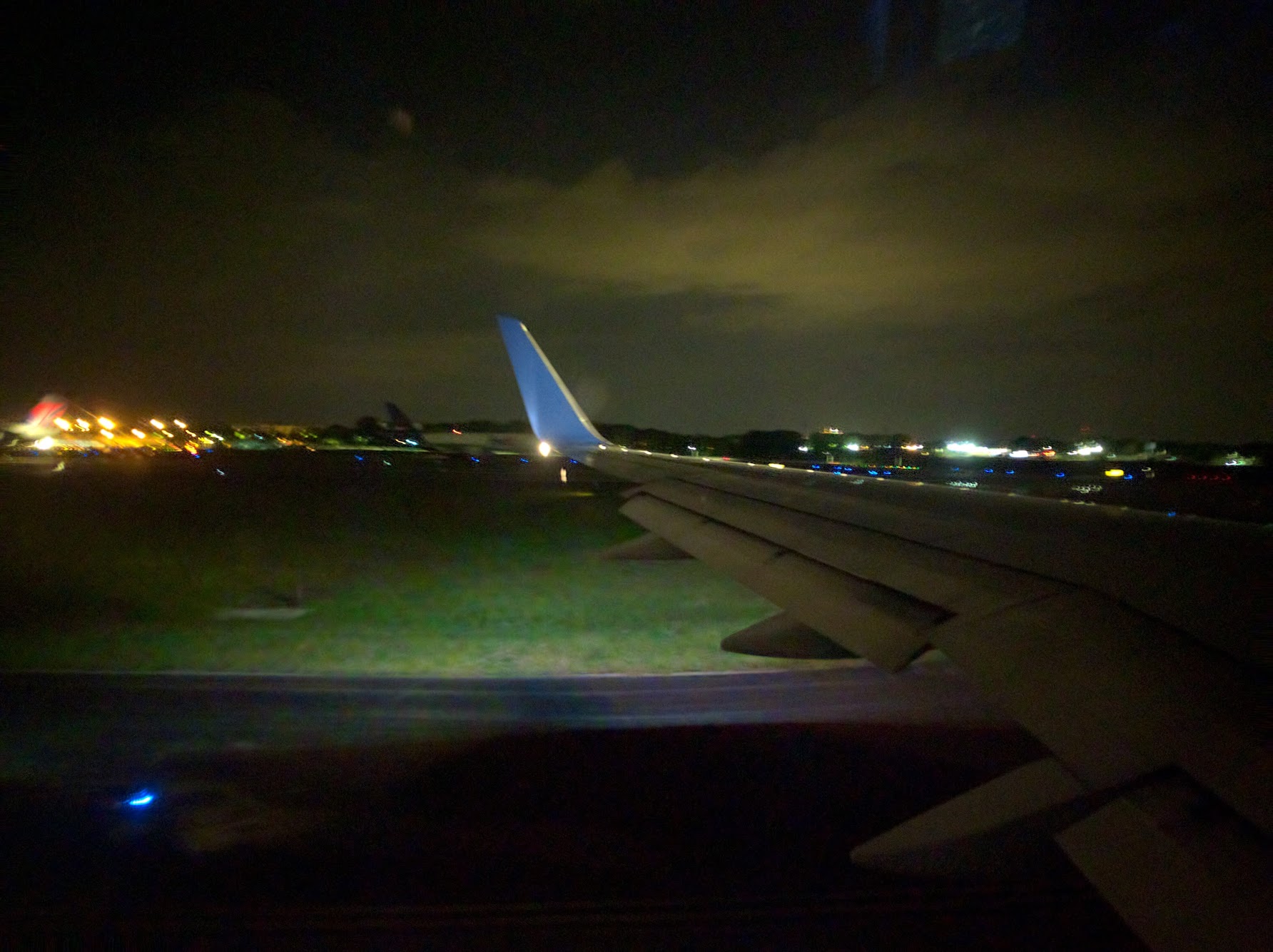 Since this flight was technically a red-eye flight, the cabin crew quickly completed a full beverage service just after takeoff. For the rest of the flight, a flight attendant would bring a tray of water and coffee through the cabin for people who weren't sleeping. I took advantage of the huge amount of space to do some work on my laptop, so I was drinking coffee the whole flight. One of the flight attendants was joking with me a bit after he handed my my fourth or fifth cup towards the end of the flight. I told him I didn't want to sleep through the one time I wasn't squished into a window seat and he smiled.

Taking a break from work. 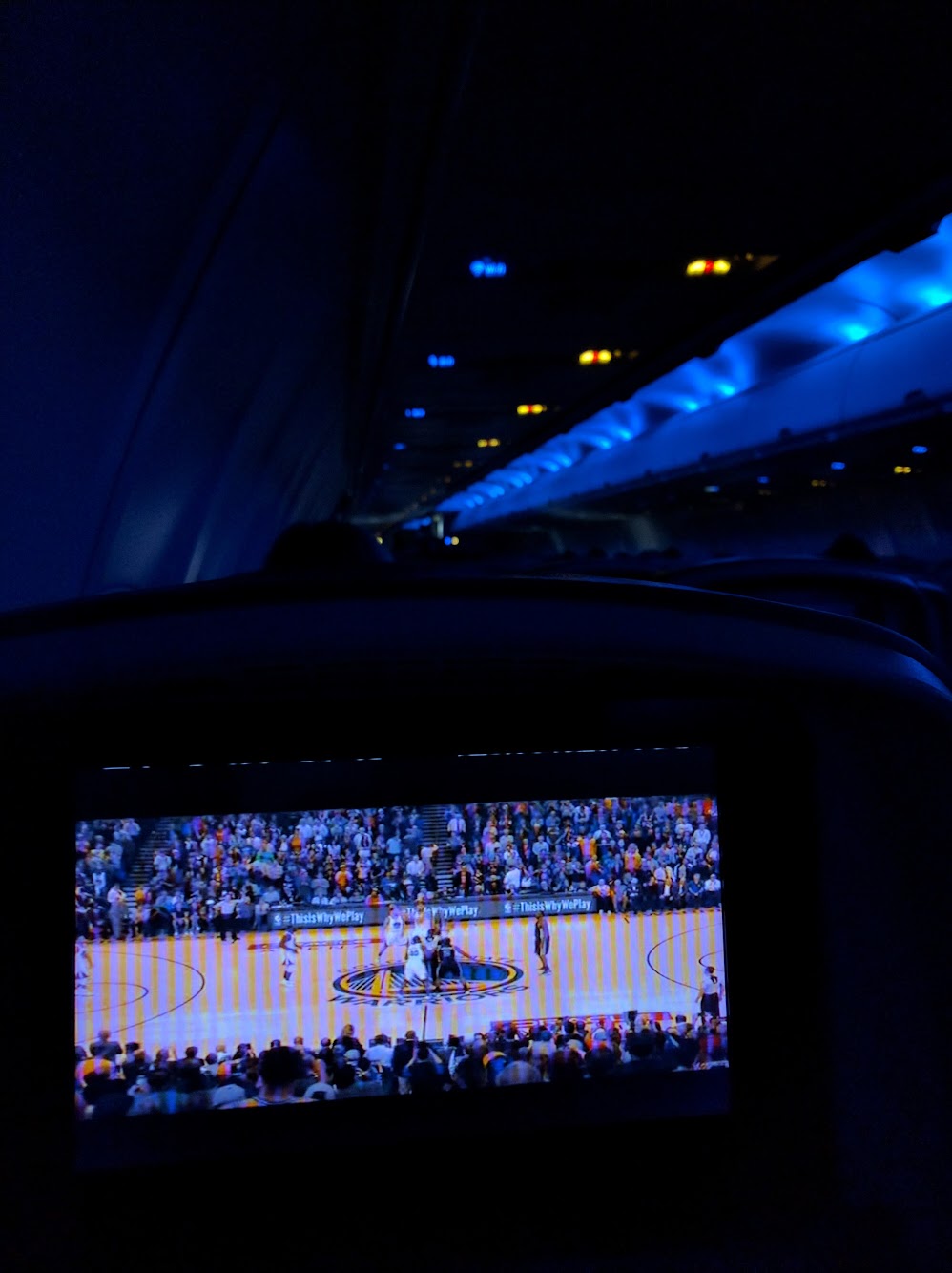 The one bad thing about the live TV is that there are commercials. During a commercial break I checked the map to find we were approaching Oklahoma City. 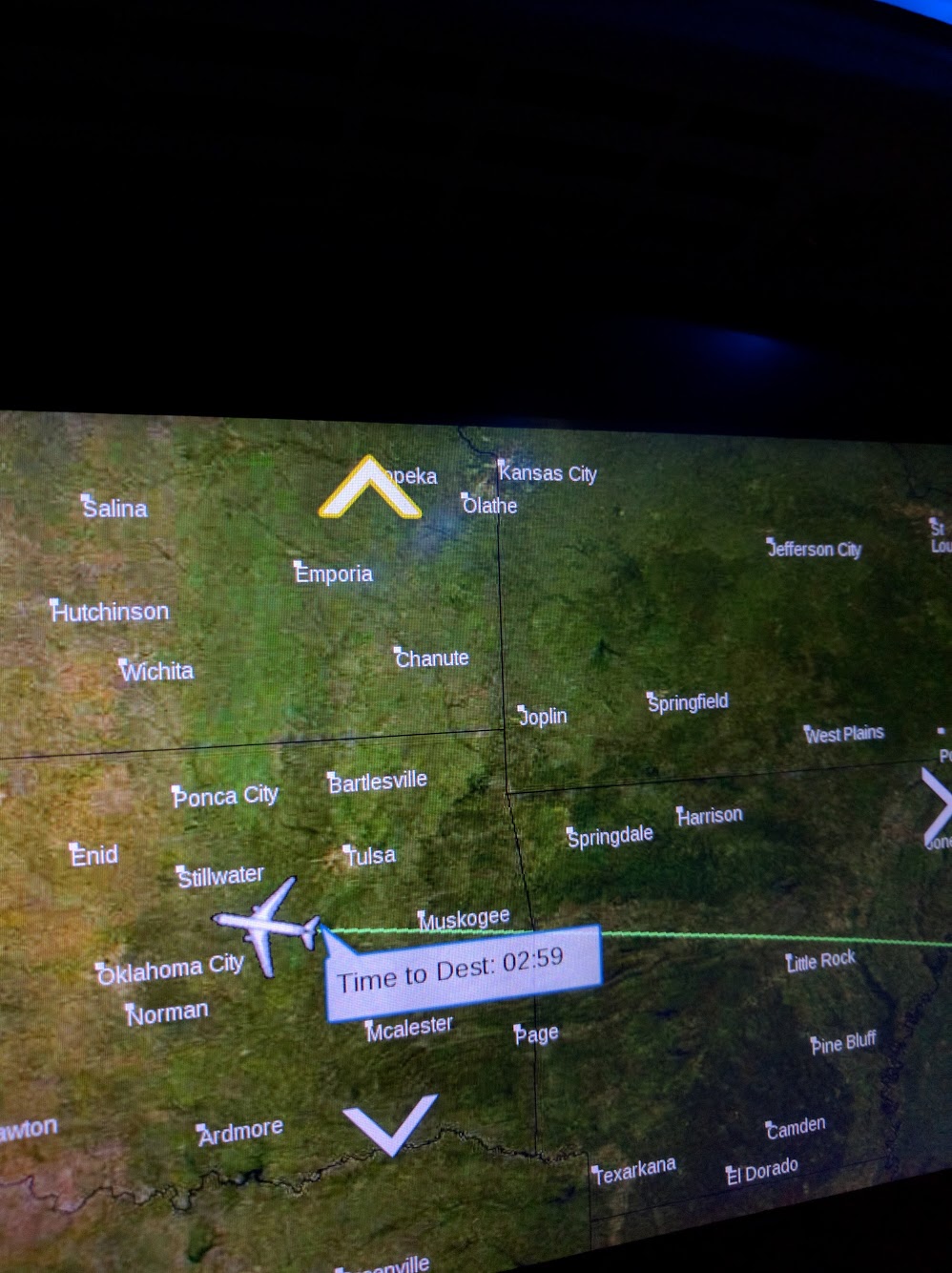 It was a clear, dark night, so the lights from Oklahoma City stood out nicely. 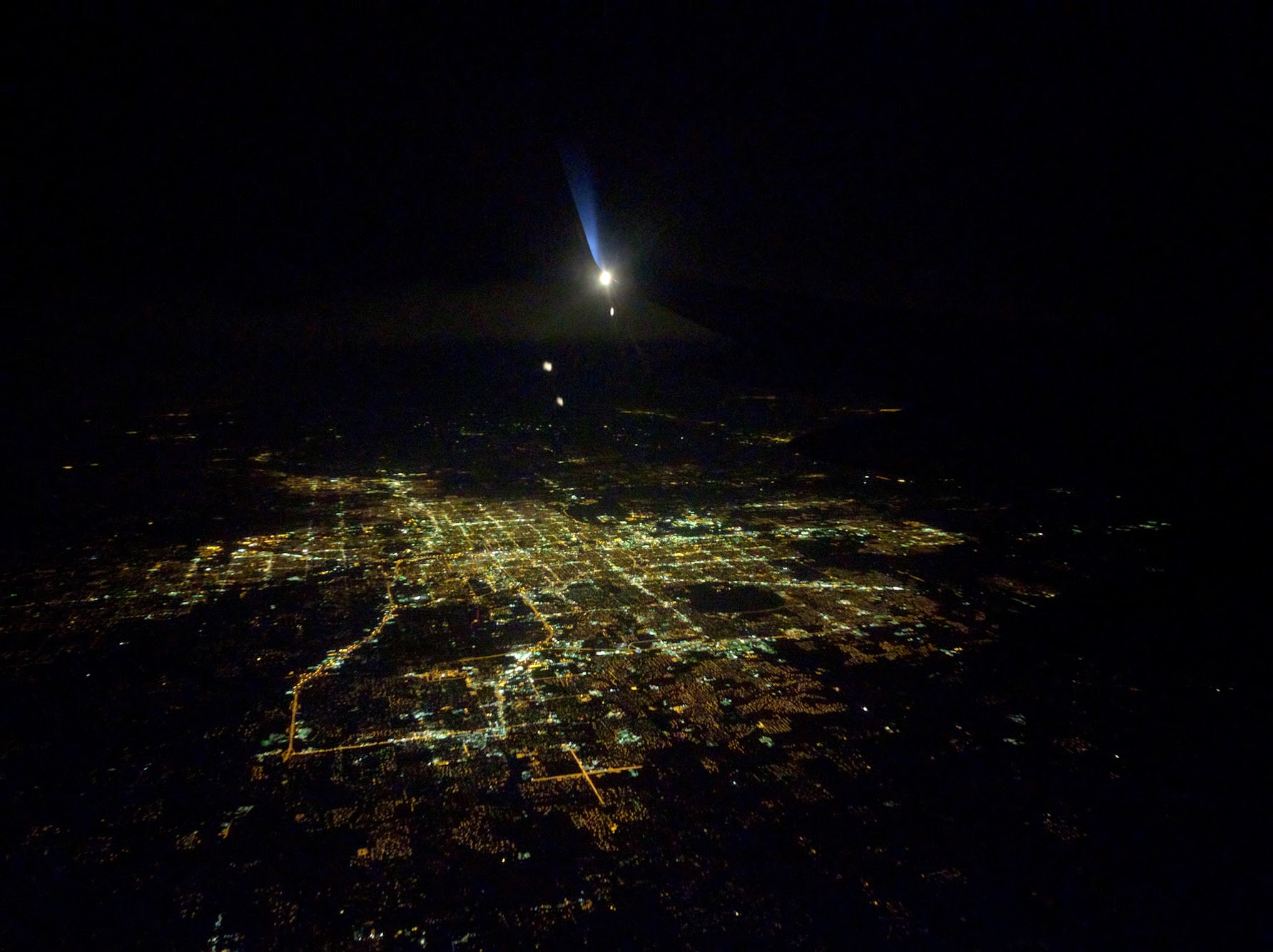 A few hours later we were getting closer to San Francisco. With the huge amount of personal space I had, the flight had flown by (pun intended). 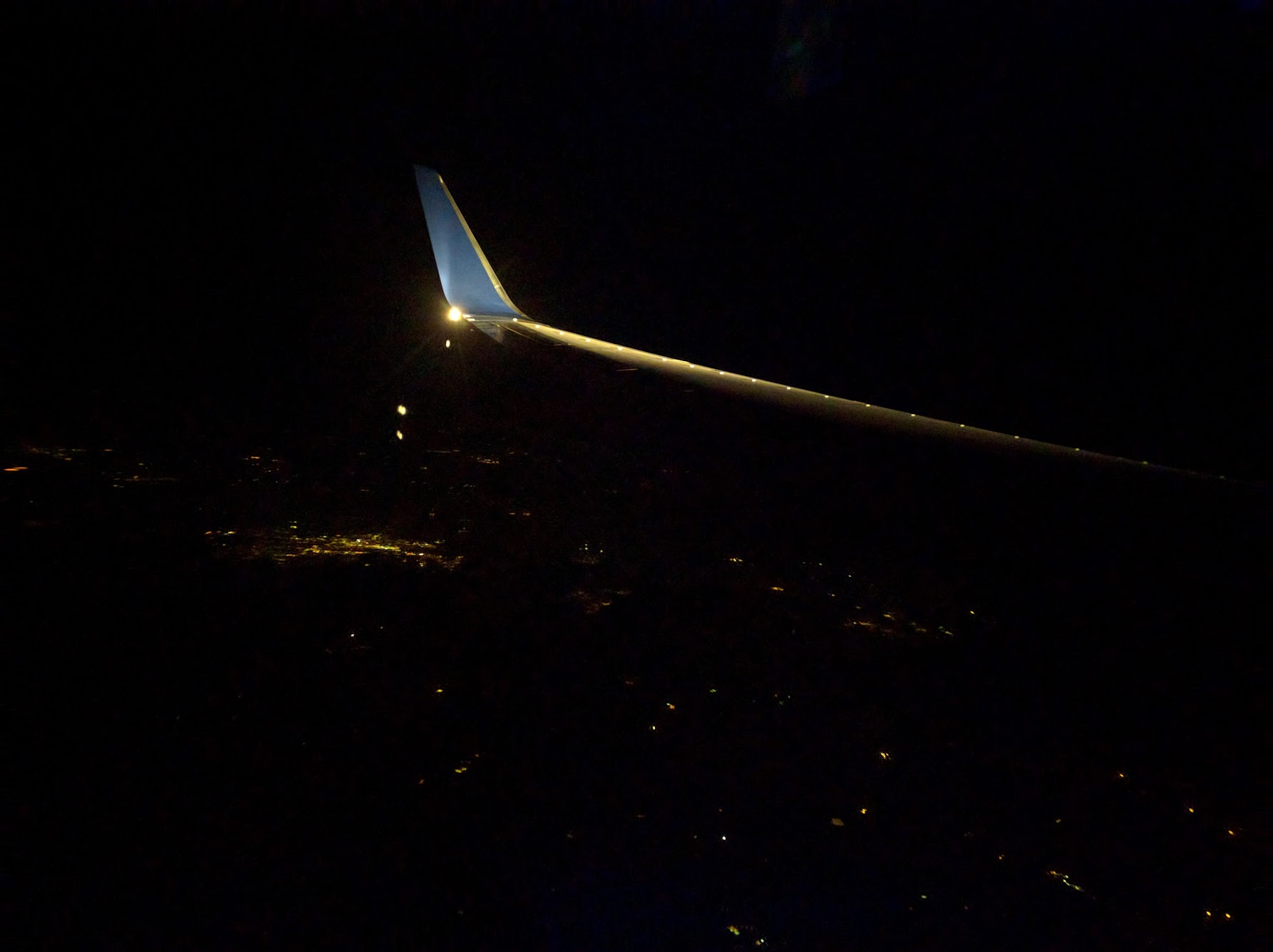 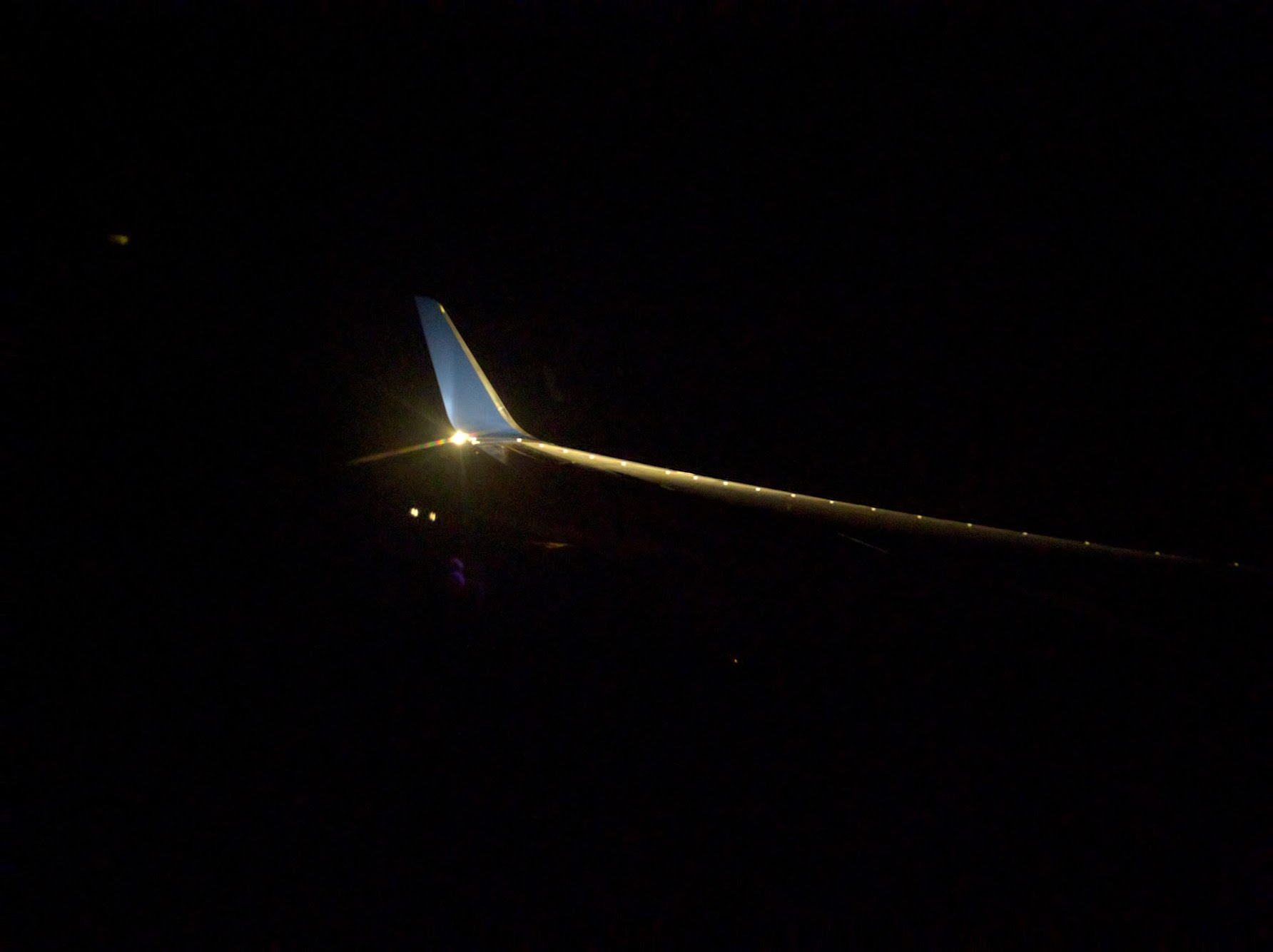 San Jose coming into view. The dark area just below the wing is SJC airport. 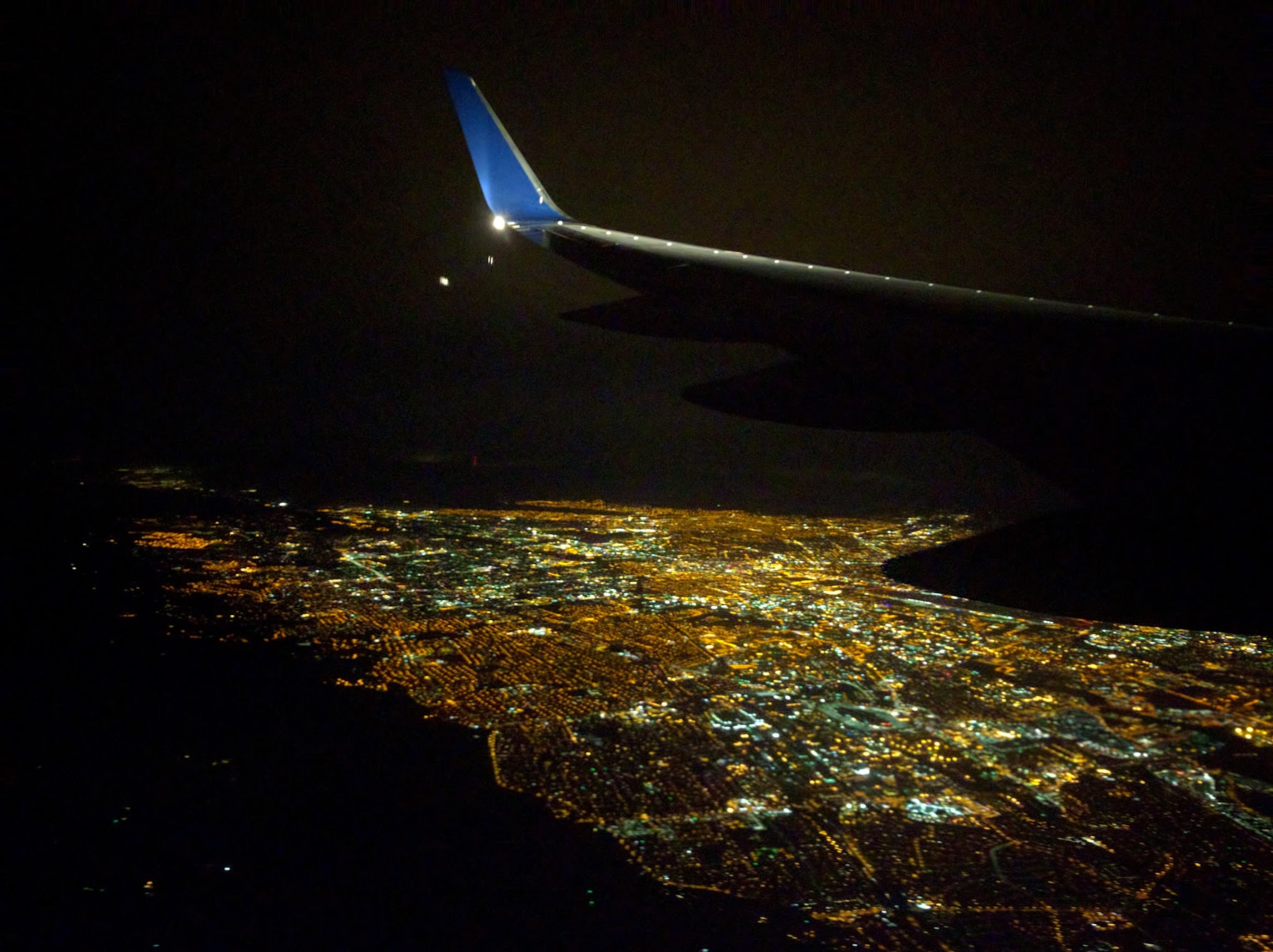 And here's a video of our approach and arrival onto runway 28R.

We arrived into an almost completely empty Terminal 1 at SFO, the only people in the terminal were the last few passengers boarding a 767-300 for a 12:30am departure to Minneapolis.

Since we arrived much later than originally planned, our four person group had to get an Uber to our hotel instead of taking BART.
See more

Delta was amazing on this journey. Every agent with whom I interacted was pleasant and very helpful. The cabin was new and clean, and the entertainment options were plentiful.

Atlanta airport is an extremely impressive piece of infrastructure. Even past 9:00pm every hallway was packed with people. The lines for restaurant locations were long but seemed to move quickly enough.

San Francisco Terminal 1 leaves a bit to be desired -- there is only one restaurant in the boarding area Delta uses. The gate areas themselves are adequate, however.