By michealjo 1151
Published on 15th January 2017
Hi everybody! This is the report about the flight between two biggest cities in Vietnam, Ho Chi Minh City and Hanoi. This is my first report so I hope that I will receive sympathy from you guy about the mistakes I make!

This time I went to Hanoi for personal work. At the first time, I had booked the flight that scheduled to operate with a Airbus A350, since I haven't flown with this kind of aircraft before. But, the authenticity didn't happen as what I wished: They switched the aircraft, that meaned I would fly with the Boeing 787, which I have flown with a lot of time and I felt bored with that! I was disappointed with that circumstance, but I couldn't do anything. I had asked for the earlier flight, which would operate with Airbus A350, but my ticket was non-changeable :( . Fine, I just flew, and forgot about that.

I arrived the airport at 1:05 PM, 1.5 hours before the estimated departure time. Since I have the Golden card of LotusMile frequent flyer program, I was upgraded to seat in the Deluxe Economy Cabin. Vietnam Airlines offers this kind of cabin in some long-haul flights, like Europe and Australia flights. In medium and short haul, the cabins are served for Economy Class passengers in Economy Class service. Especially, passengers with high-level card of LotusMile are often upgraded to seat in this cabins. The check-in counter wasn't crowded, and it took me a short time to finish the check-in protocol. I was satisfied with the enthusiastic, friendly behavior from the ground staffs. The security wasn't long too, since there weren't many flight departing at this time.

After doing all the aviation procedure, I went to Burger King and a light meal there since I hadn't had lunch. The meal was affordable: it was nearly 4.5$ for a burger, a french fries and a big glass of coke. It was too delicious! There are many other restaurants, cafeterias near there for passengers to have something to eat before flying.

Finally, it was time for embarkation. There was a coincidence that my uncle was in the airport at that moment too, he was going to fly to Hue. I talked with him for a while, so I was the last passenger to boarding. Our aircraft was a Boeing 787, with the reg No. VN-A861. It was a first Boeing 787 that delivered for Vietnam Airlines and the carrier received it on August 2015. It was attractive, beautiful and very shinny! I love it! But then there was an incident from the luggage department when loading luggage onto the aircraft, so we had to wait on the aircraft. And the flight was delayed 2 hours! 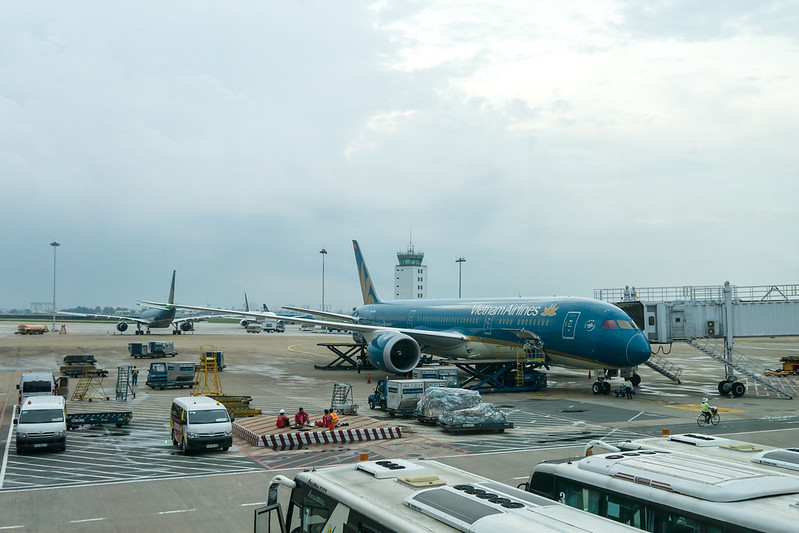 The cabin was empty since there weren't many people used the Deluxe Economy Class service. The seat is comfortable and big, like the Regional Business Class on Vietnam Airlines' Airbus A321. There are seat recliner and leg support controls on the seat. The legroom is very big, which is suitable for some long-haul flights. Each seat is equipped with a personal screen with high resolution. It is basic and easy to use. There are many new films, musics that passengers can entertain during the flight. I can see a huge improvement from the carrier in order to innovate this service from the notorious one in Boeing 777 before. 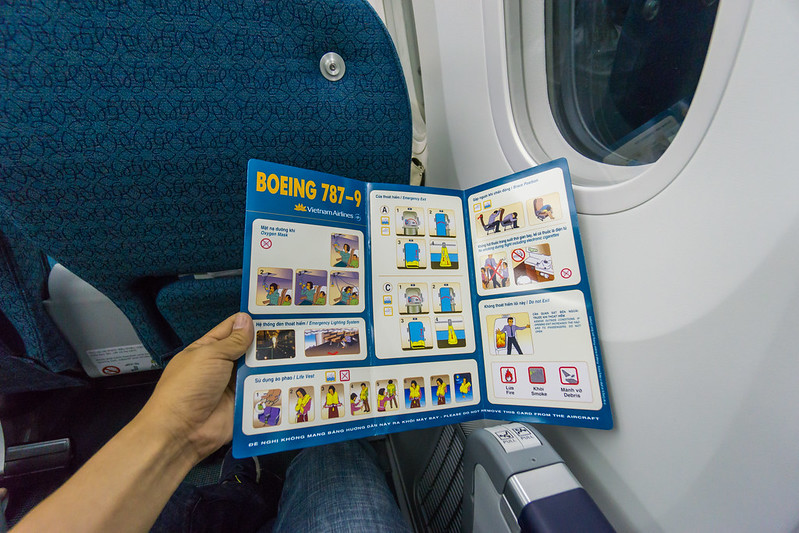 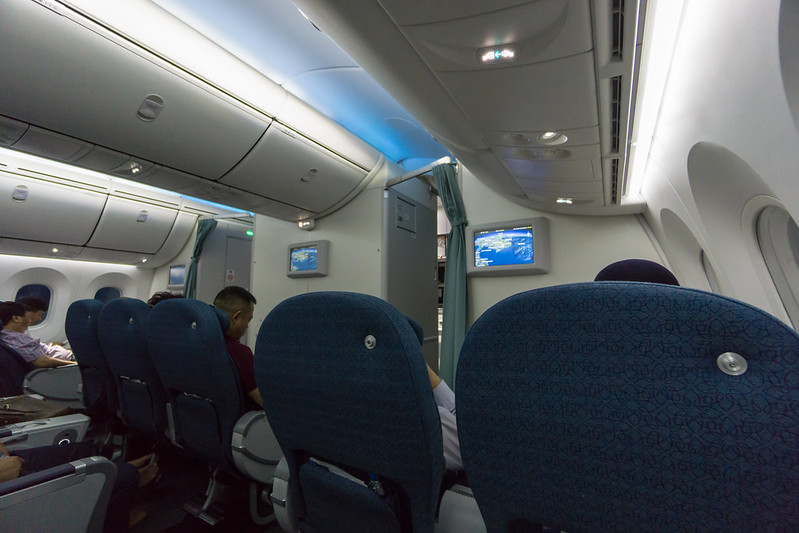 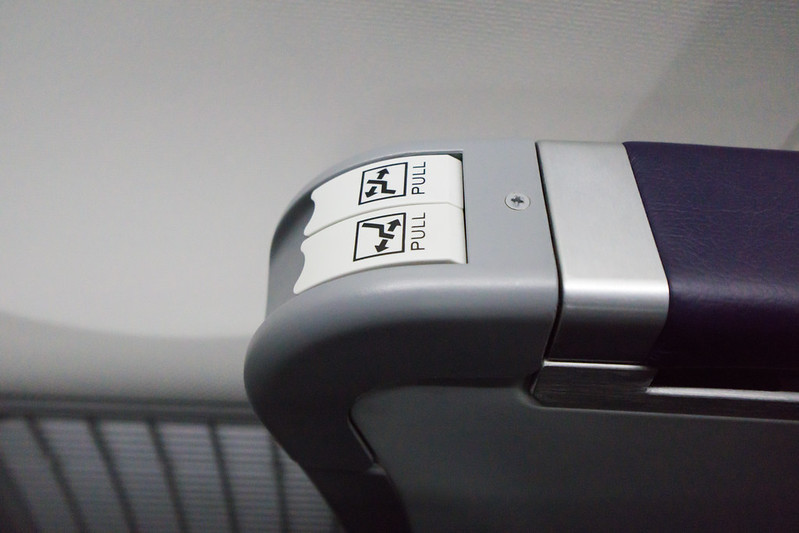 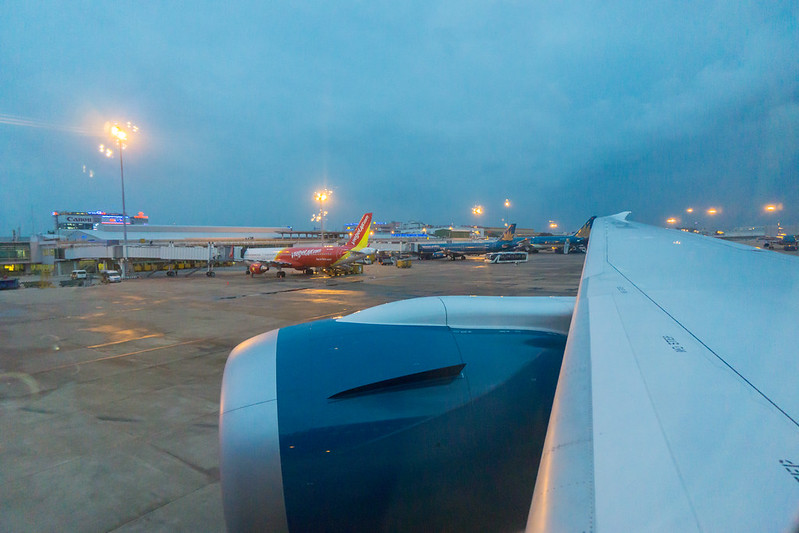 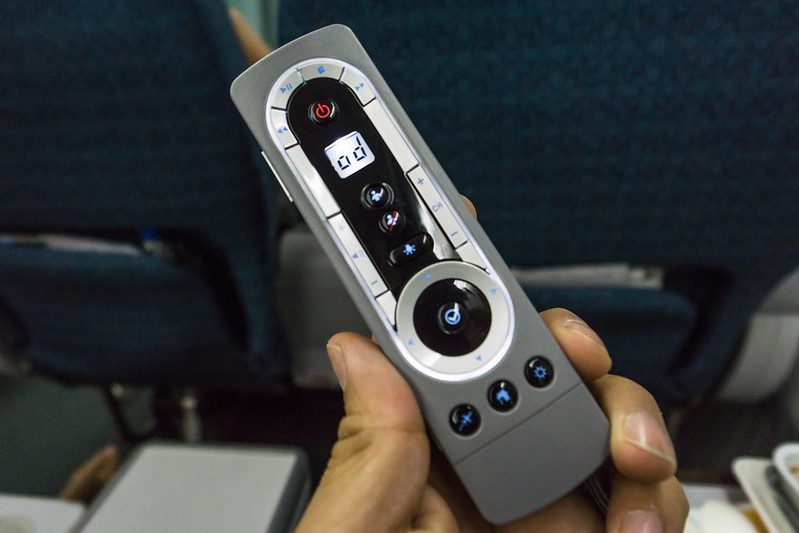 After everything was stable, the aircraft was mobile. The take-off was smooth and this was probably way better than 777. I was too excited by looking almost everywhere that's why I forgot to snap any take off photo. 25 mins after take off, dinner was served. There were 2 choices, and I chose the chicken noodles one. The meal was decent and very basic. It wasn't that bad though. The purser was nice but the service was still very basic and unprofessional. But at least, the crew weren't rude to me. :-) 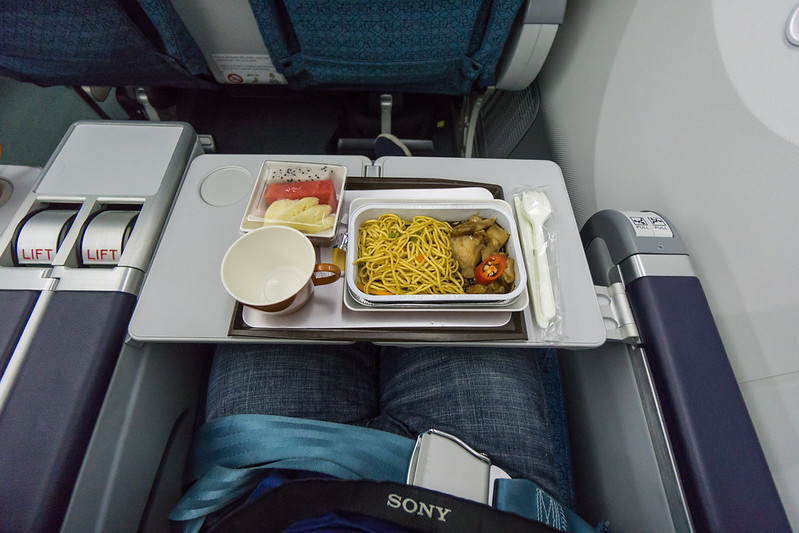 I walked around the aircraft. Then I visited the bathroom. It was super clean, luxurious, and the comfortable. It provided more spaces for the passengers than other kinds of aircraft. 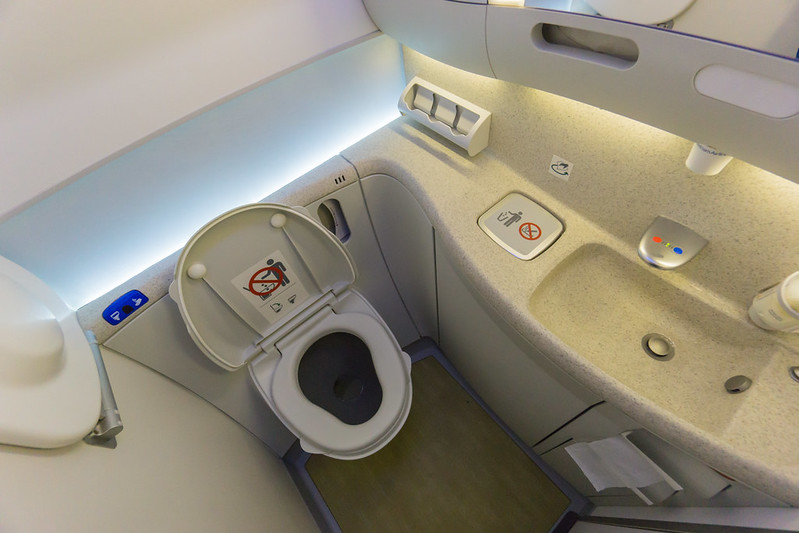 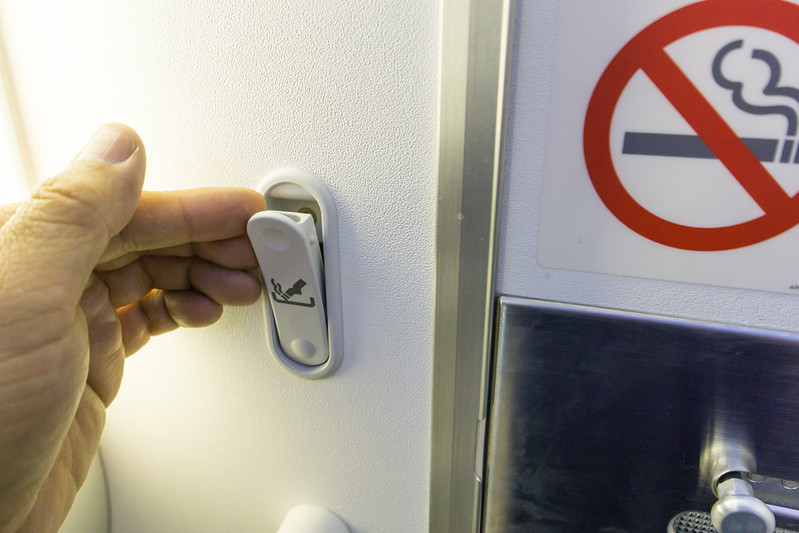 After 1:45 hour in the sky, the aircraft finally landed on Noi Bai International Airport. As we approached HAN, the captain informed us that there was a huge rain cell over the airport so he was going to make a big circle out to sea and let the storm cell past. The night sky outside were a sight to behold. Lighting flashes going off like crazy. I have never seen so much lighting flashes in my life. During the landing, we encountered lots of turbulence. The aircraft was bobbing up and down and shaking sideways. With the cabin lights dimmed, you can see the lighting flashes coming through the large Dreamliner's windows light a strobe light of a disco! We landed safely in the rain and taxed to the gate. The flight was about twenty minutes late due to the pilot circling around the storm. Wow..a real test for the Dreamliner and the flight crew! I exited the aircraft by bus, this was great because I could capture more photos and see the aircraft this close. It was gorgeous outside. I hope you will agree that VNA's livery is quite unique and cool. I was lucky to take a picture of my aircraft when it stopped at the gate 21. 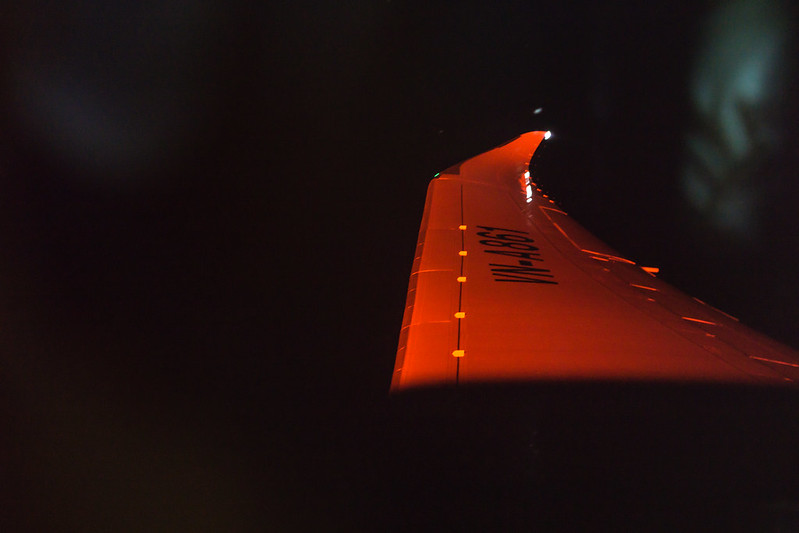 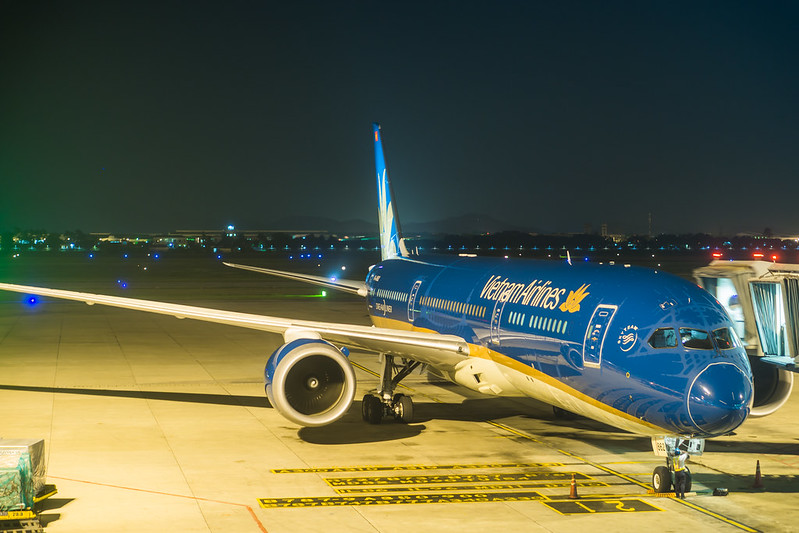 A picture of me and my daddy 8 years ago in Noi Bai Airport :). This picture had been captured before we flew to Singapore on the flight VN745 from Hanoi to Singapore. Vietnam Airlines at that moment didn't operate Airbus A321, so we travelled with an Airbus A320. It was my 2nd time to Singapore. And at that moment all the international flights departing from Hanoi still parked in the Terminal 1, same location with domestic flights, because they didn't the Terminal T2.

And a picture of myself 2 hours ago in front of Ho Chi Minh City Mausoleum to conclude my report!!!!

Generally, I had a nice flight with Vietnam Airlines. I had experience with the Boeing 787 Dreamliner, and saw lots of improvement since the carrier had been nominated as a 4-star airline. But I would expect more about the service. The carrier now should focus on it soft service, to be better. Especially the catering, it should be more delicious, and hotter. And the flight attendants's behavior should be improved also, some guys still have a "not-good" attitude when serving the passenger. The delay is also a problem of Vietnam Airlines, since it may affect seriously to the passengers.

The airline with the best average rating is Bamboo Airways with 7.7/10.