#51 out of 78 Airlines A minimum of 10 flight-reports within the past two years is required to appear in the rankings. 1456 reviews

1 – Boarding
2 – In-flight-experience and Catering
3 – Landing
Hi and welcome to my third flight-report!
This time I made a trip with two friends to New York City and exploring the East United States and Canada for two weeks with a rental car.
Out of Frankfurt Airport the westbound flight took us to JFK, while the return flight went off from ORD.

Shortly after arrving at Gate C14 (Security checks were quite fast but the way to the gate was relatively long), D-AIMJ arrived from Houston. In just around 2 hours the A380 will depart to New York City. Quite a tough job for the ground staff, isn't it? ;) 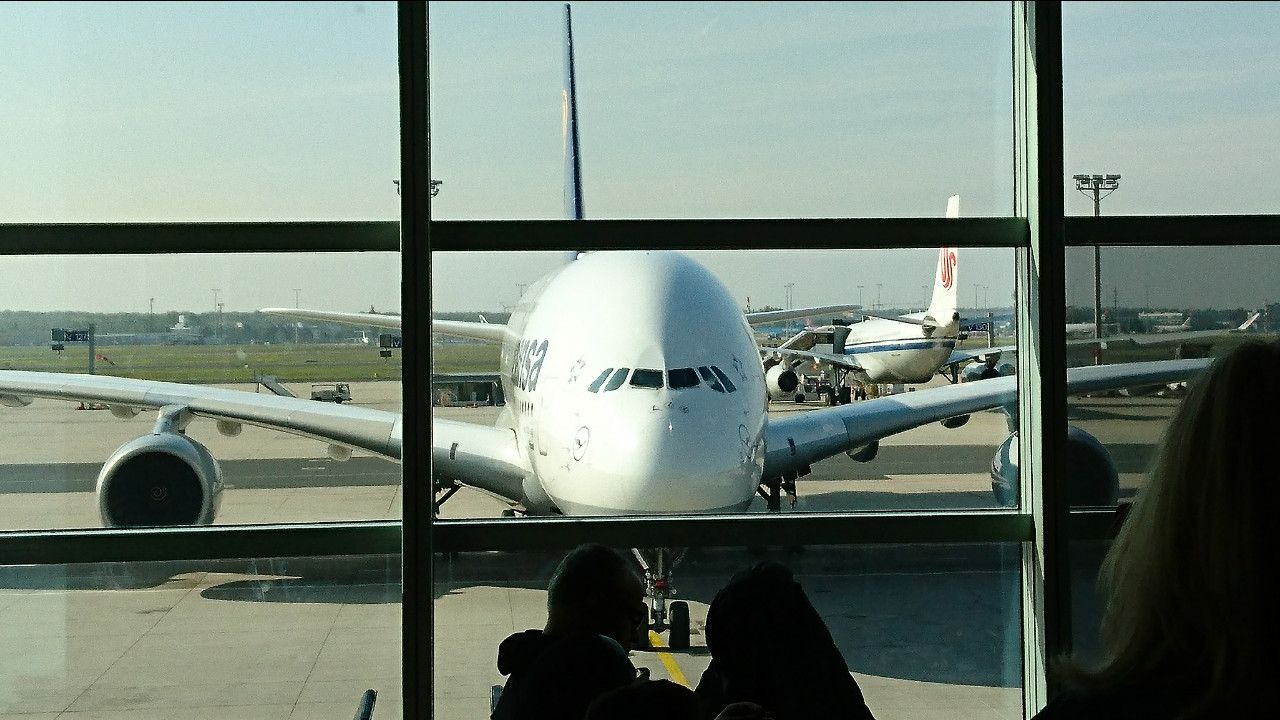 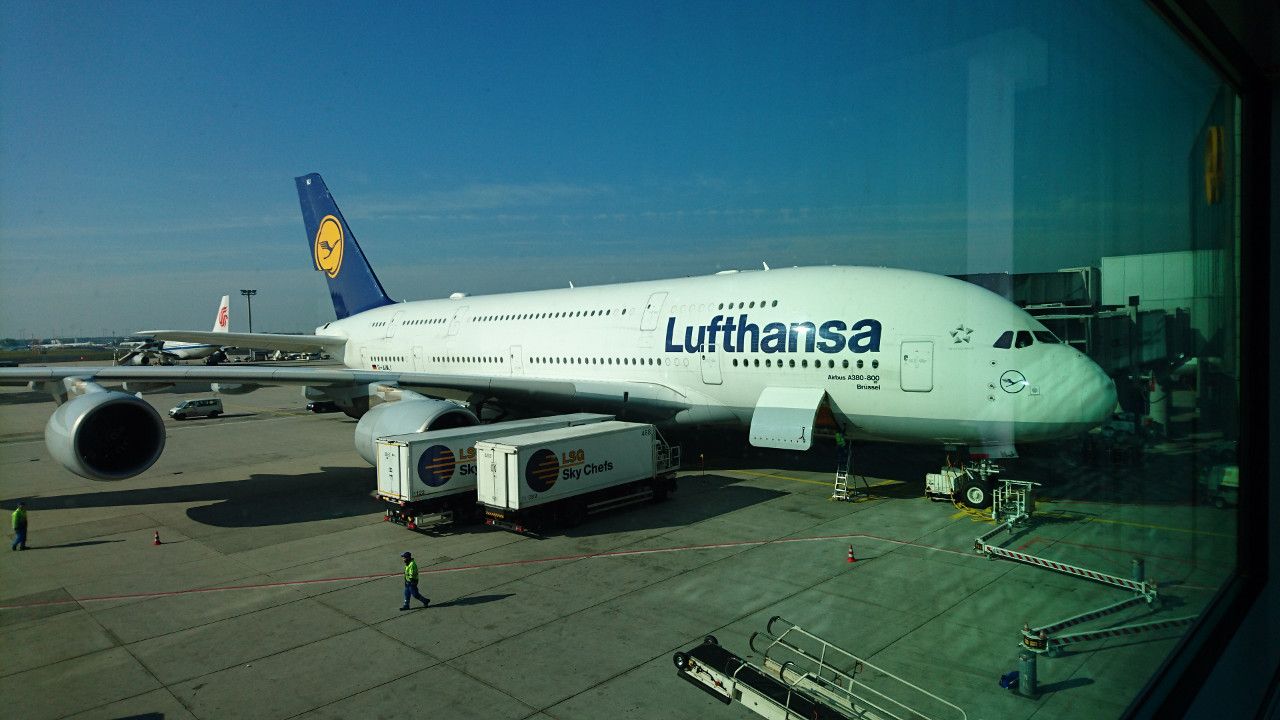 Quite enough time for a cup of coffee… 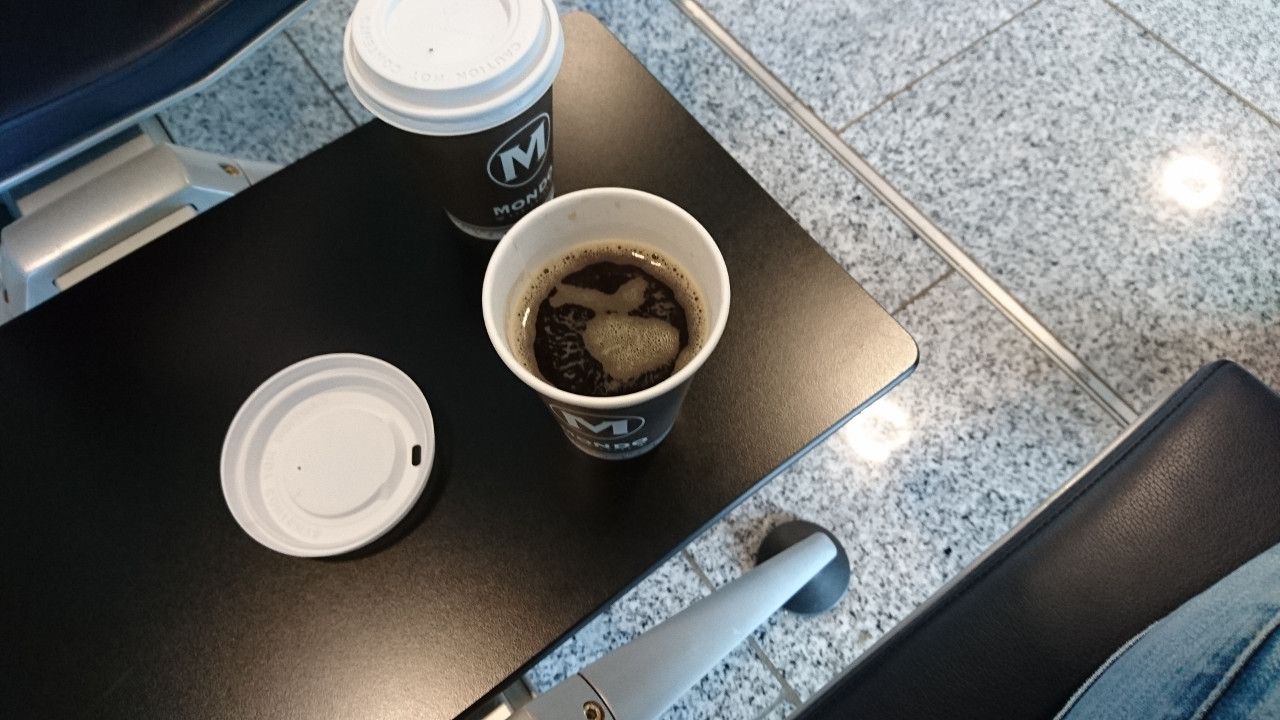 Boarding took place with only a few minutes delay and we me made our way to our seats. I was welcomed with a warm and friendly "Guten Morgen". The cabin looked pretty neat, load factor is at about 80 % 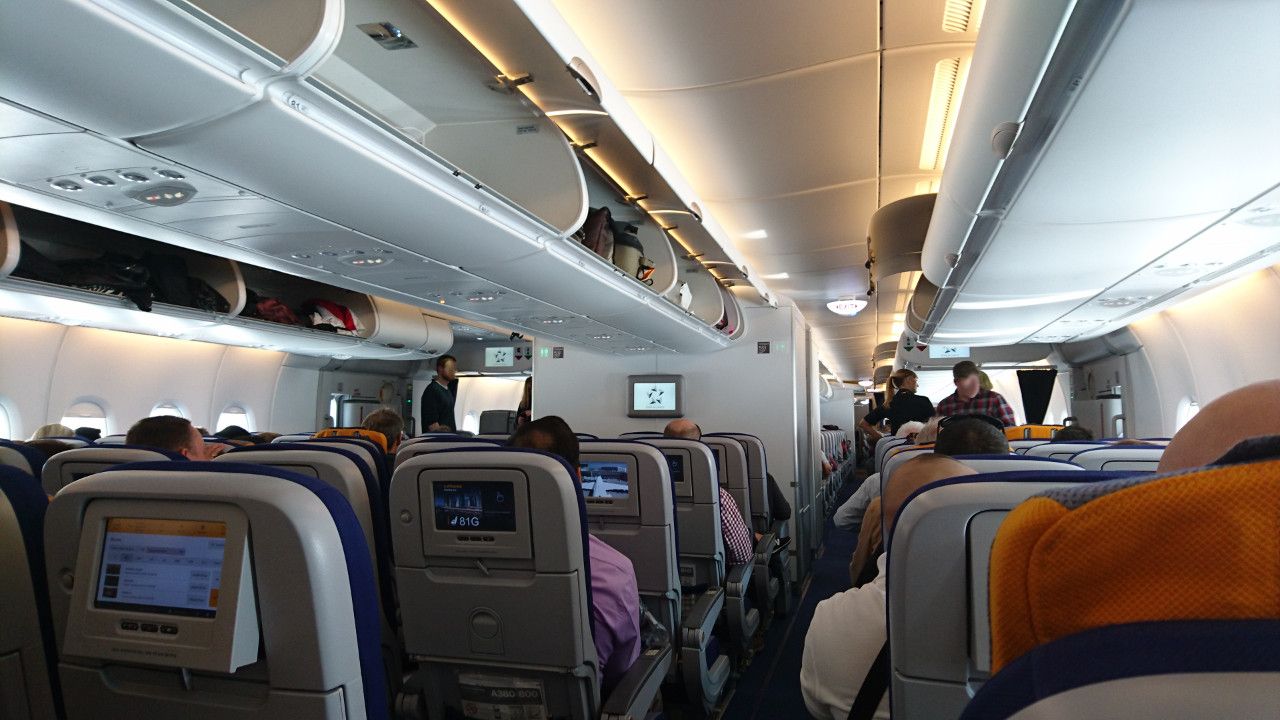 From seat 83H you can hardly see more than the wing 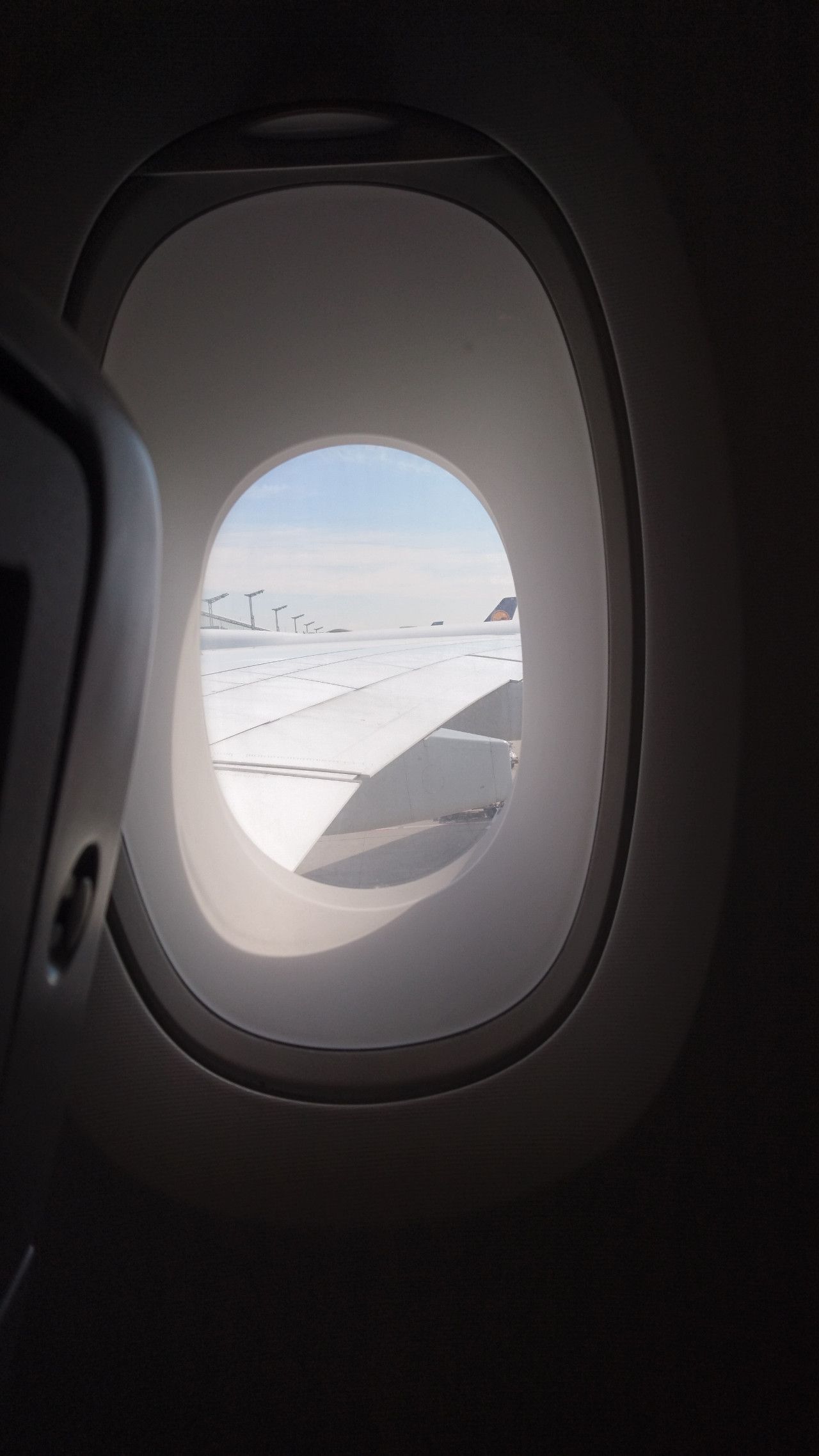 Pillow, blanket and headphones lay on the seat as usual on LH long haul flights. The seat pitch was quite ok, standard in economy i would say: 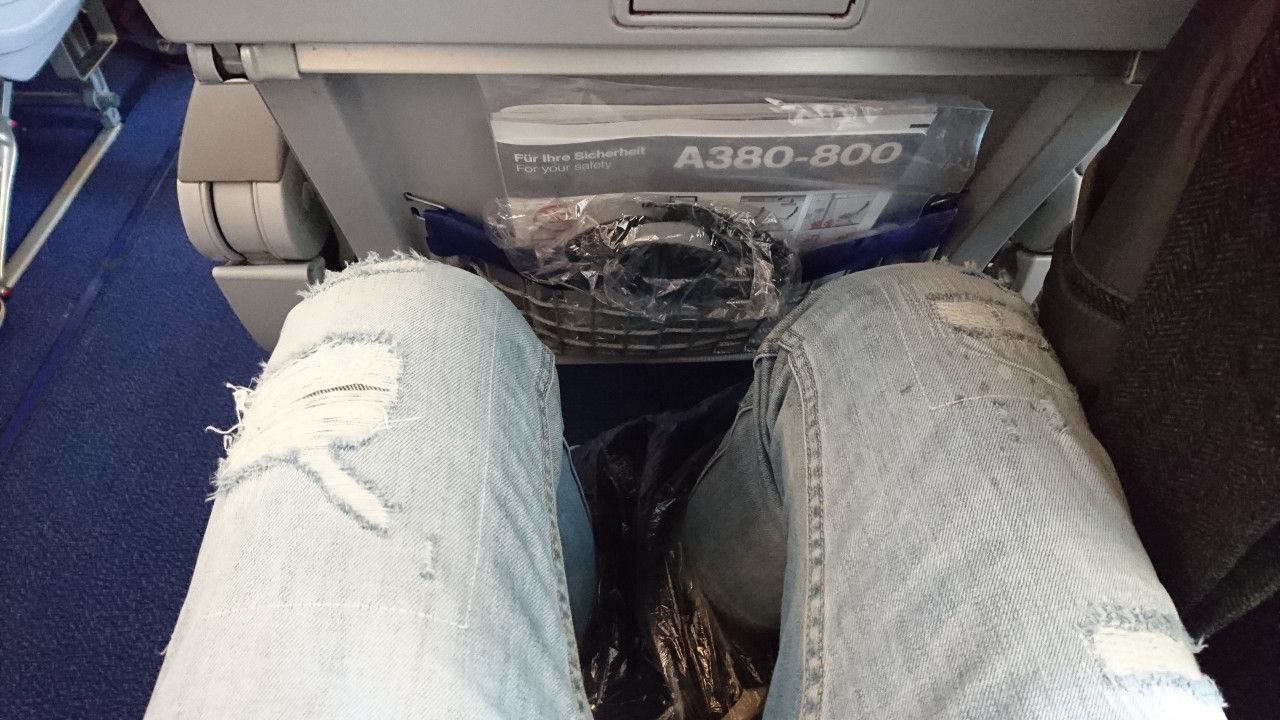 Pushback took place with only few minutes of delay… 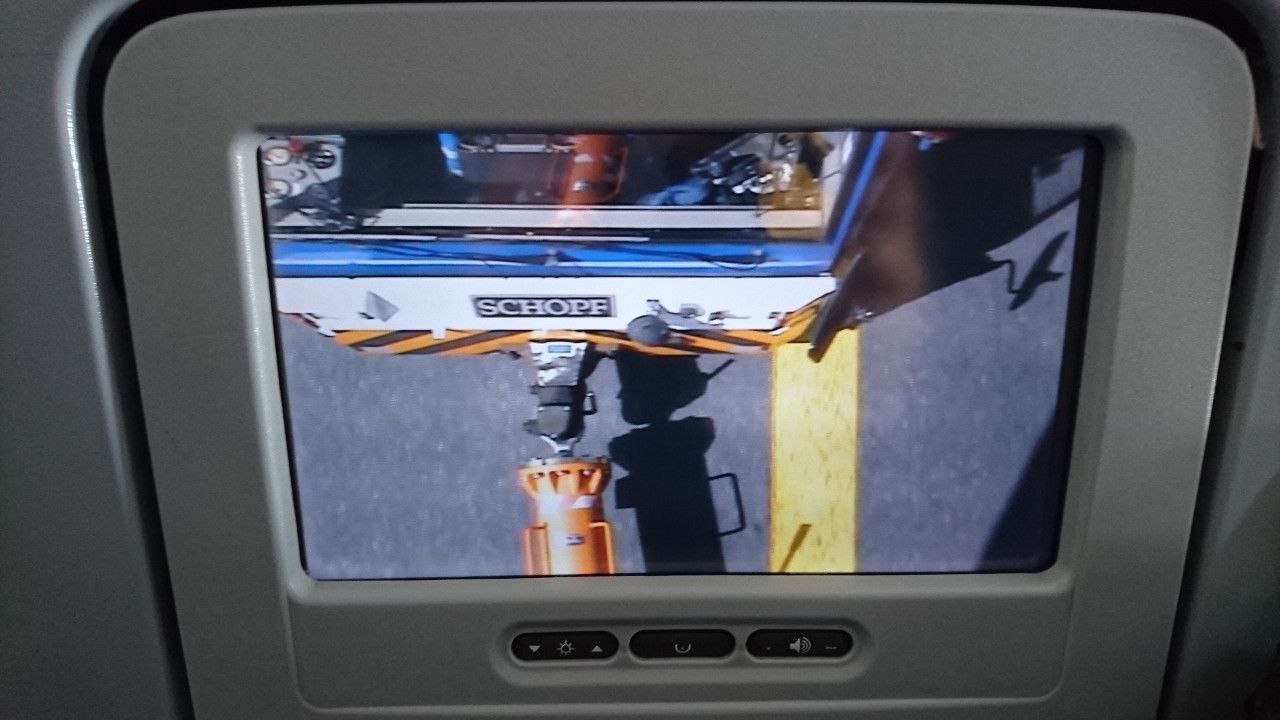 Big Bus made its way slowly to runway 07C: 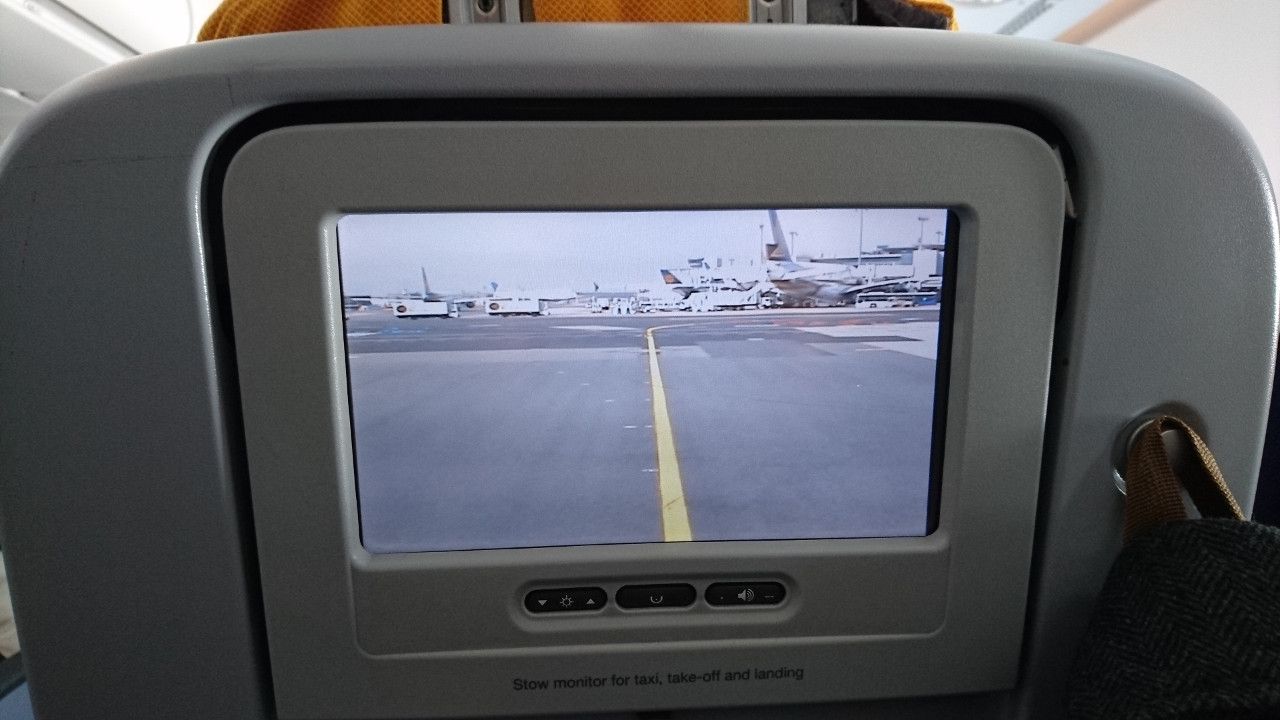 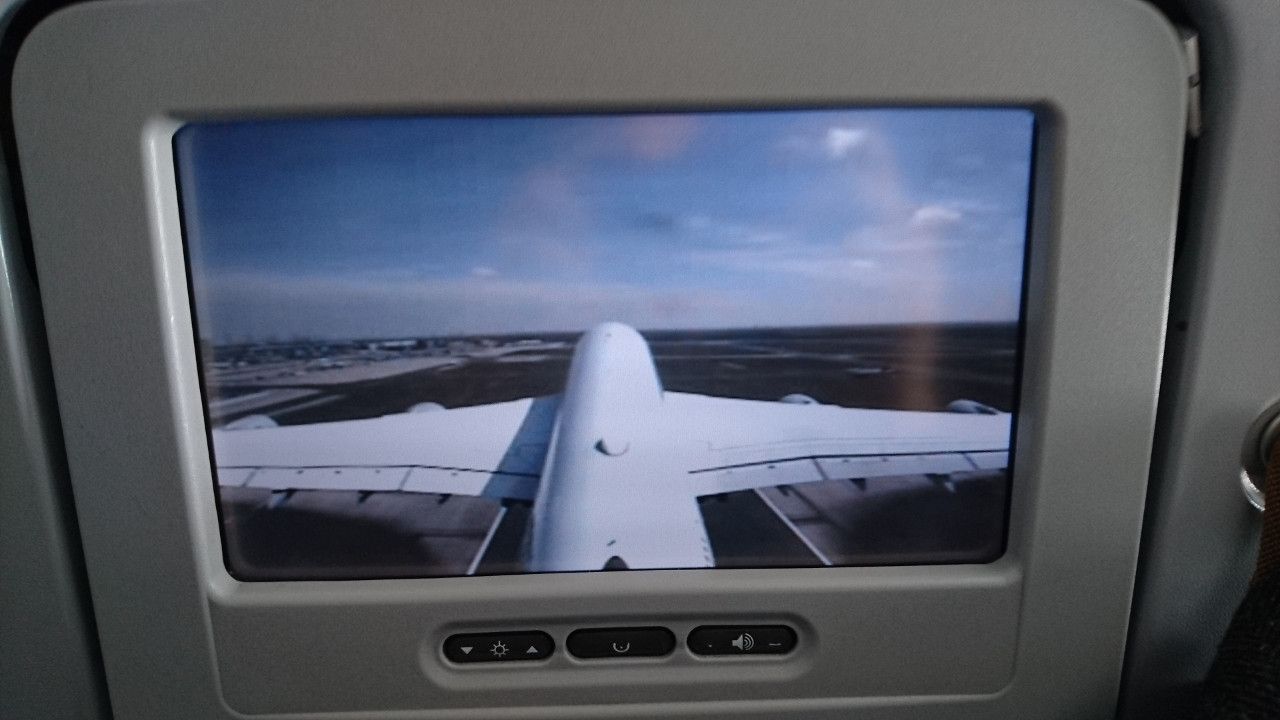 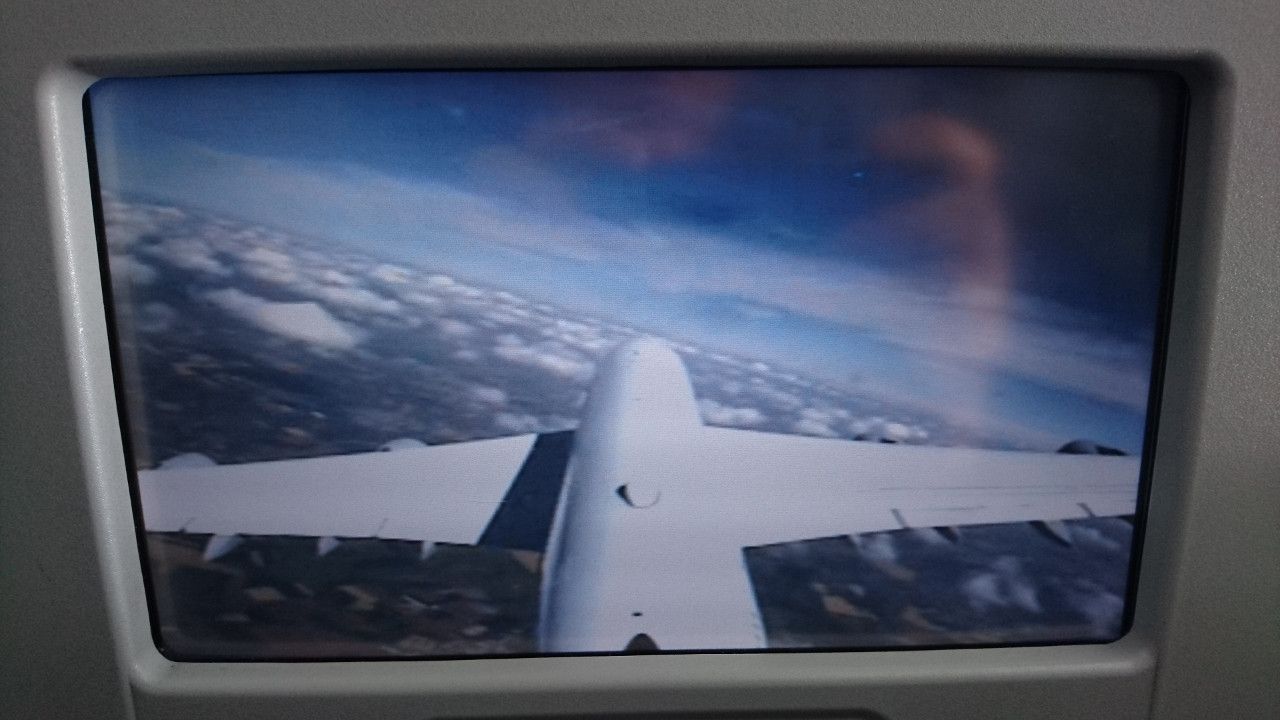 A few minutes later a pretzel snack was handed out with a drink of your choice…orange juice for me: 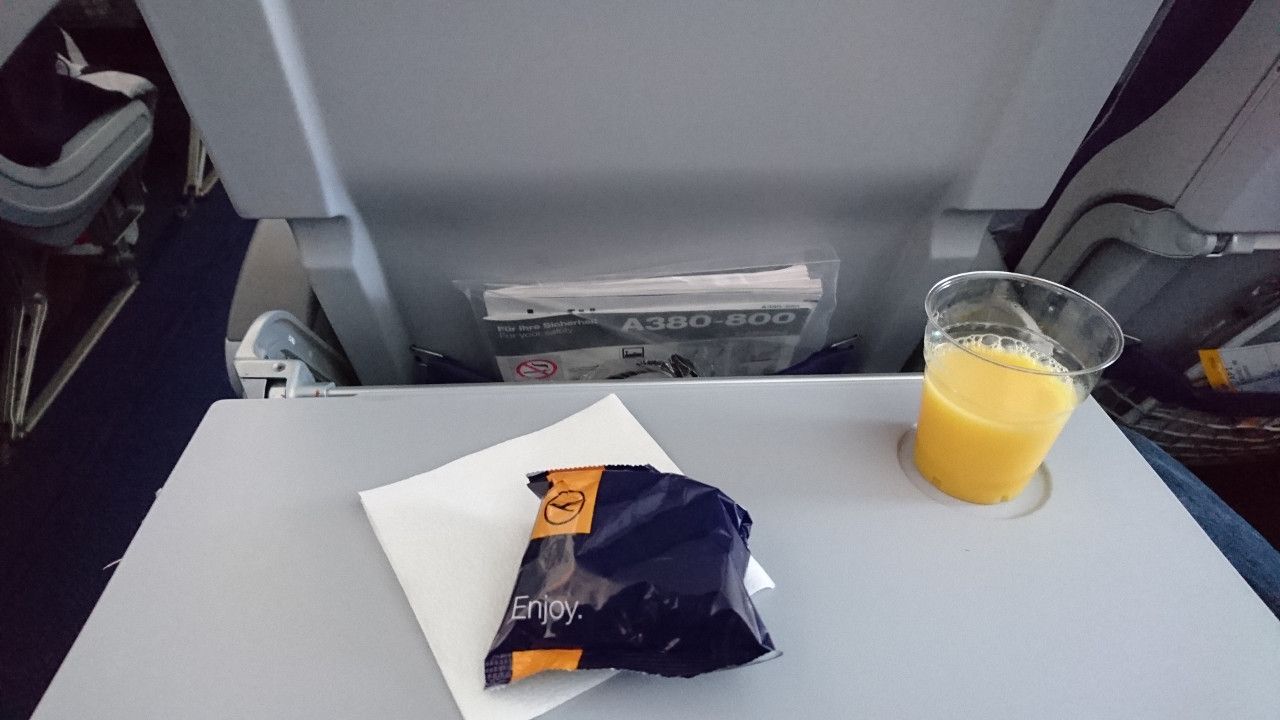 Around 40 minutes later the main meal was served. You could choose between pasta and chicken - I decided for pasta:
-Ravioli with aubergine and paprika
-mixed salad
-camenbert cheese and a roll
-strawberry cake for dessert
All in all a very good meal, I especially liked the ravioli. 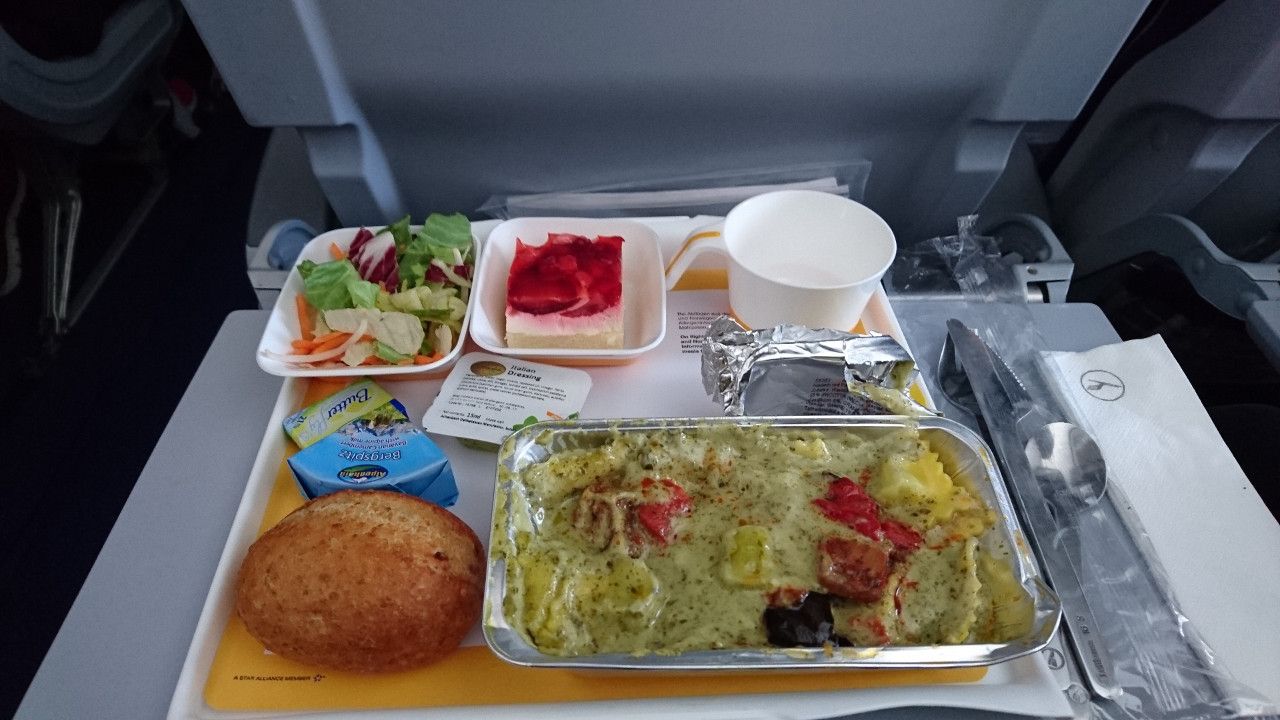 For drink I chose a beer and coffee for the dessert 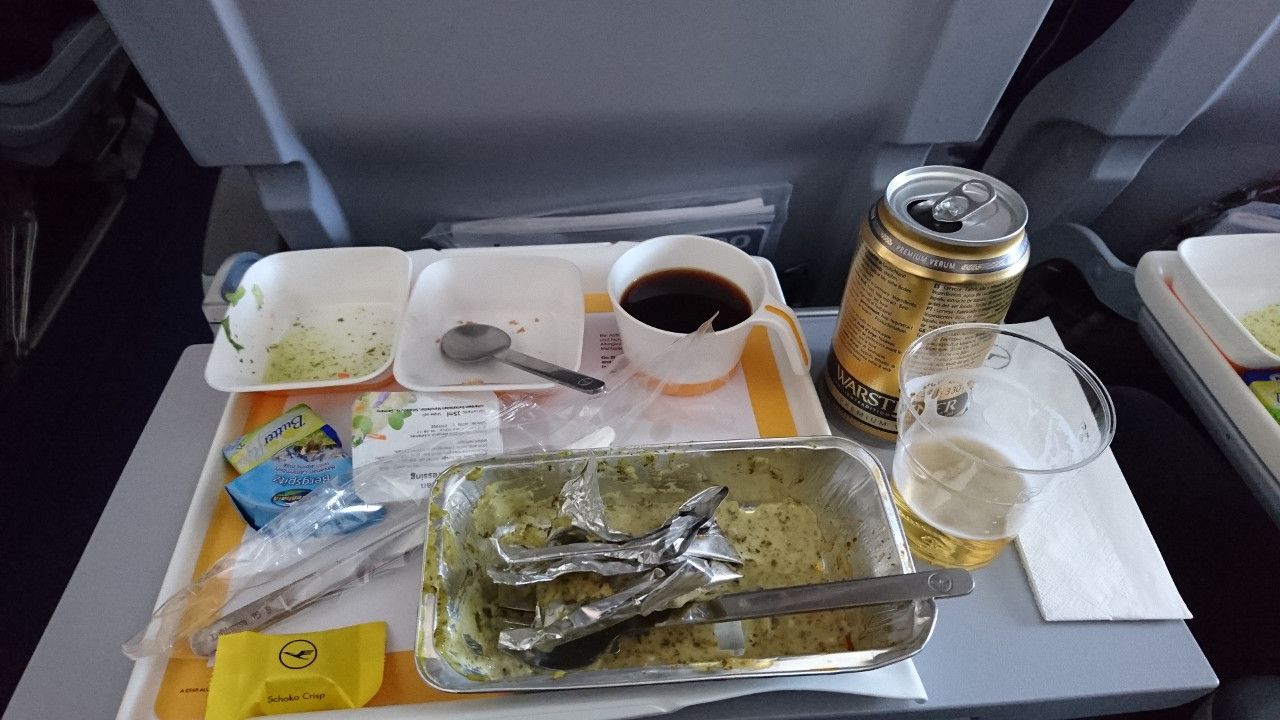 Some time after the meal I checked out the rest room - quite usual, nothing spectacular ;) 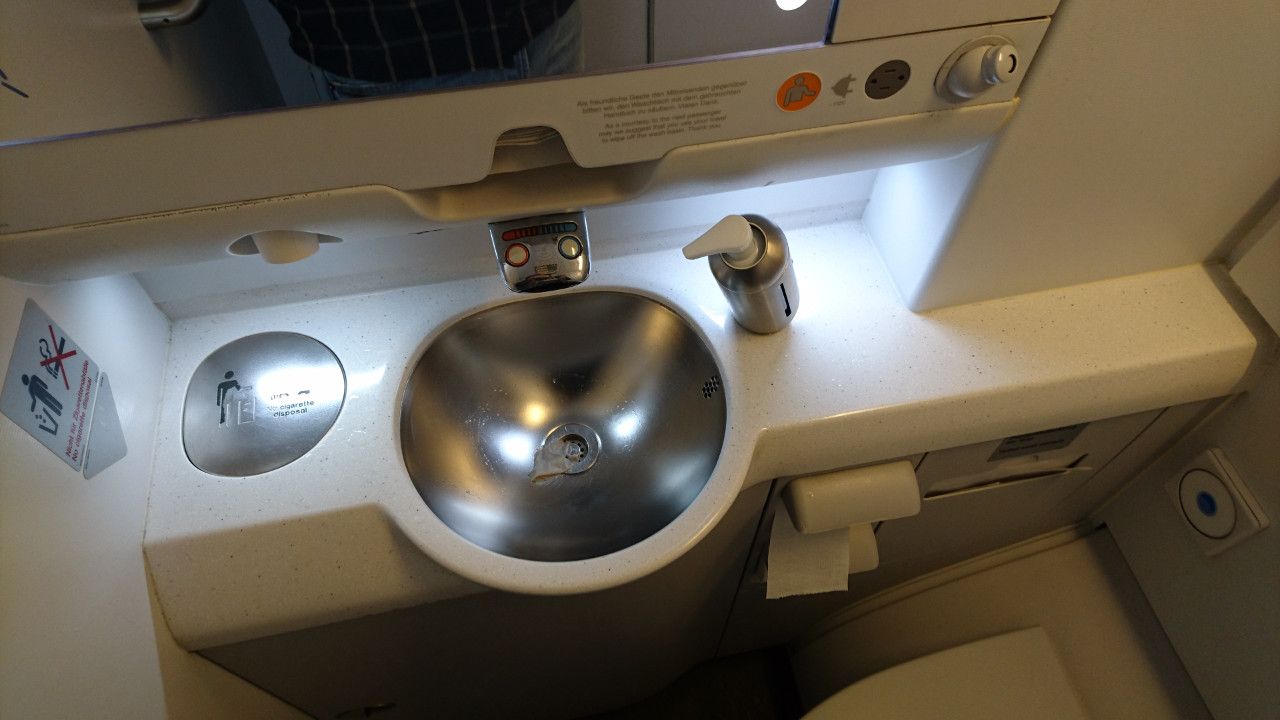 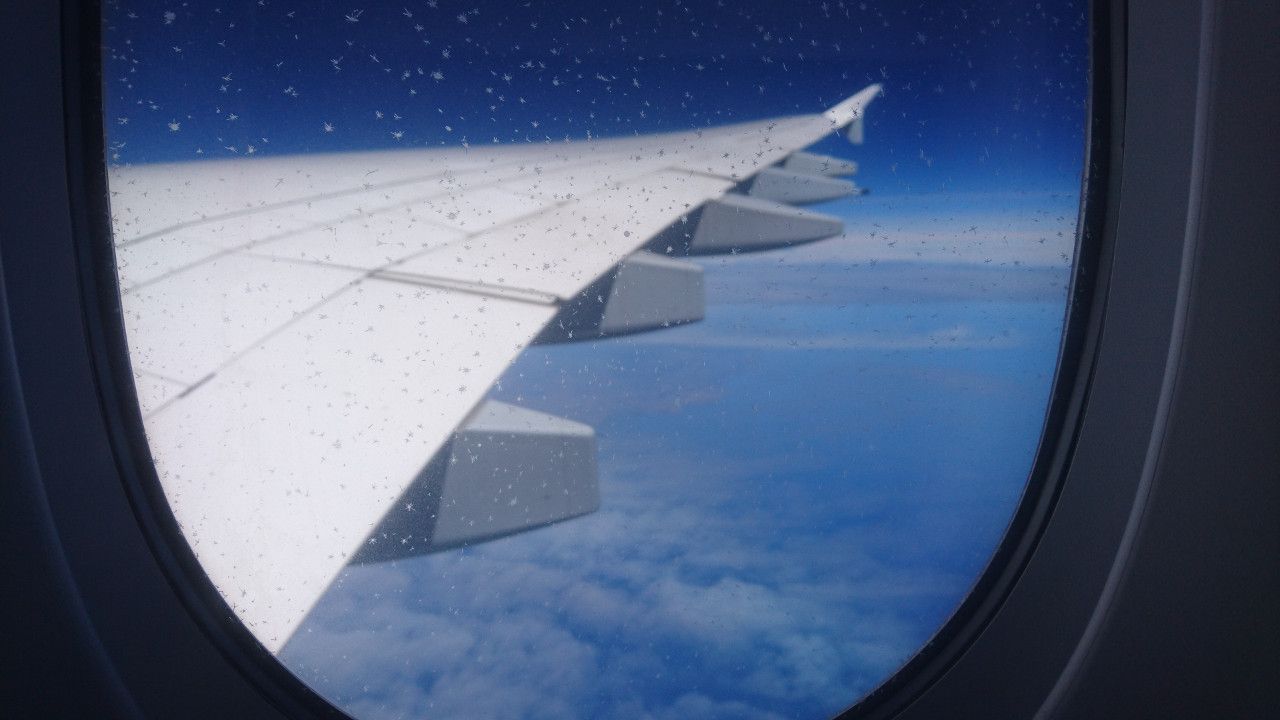 Before the descent another snack was offered - I took pizza with mushrooms and pecorino cheese: It was ok, but nothing extraordinary. 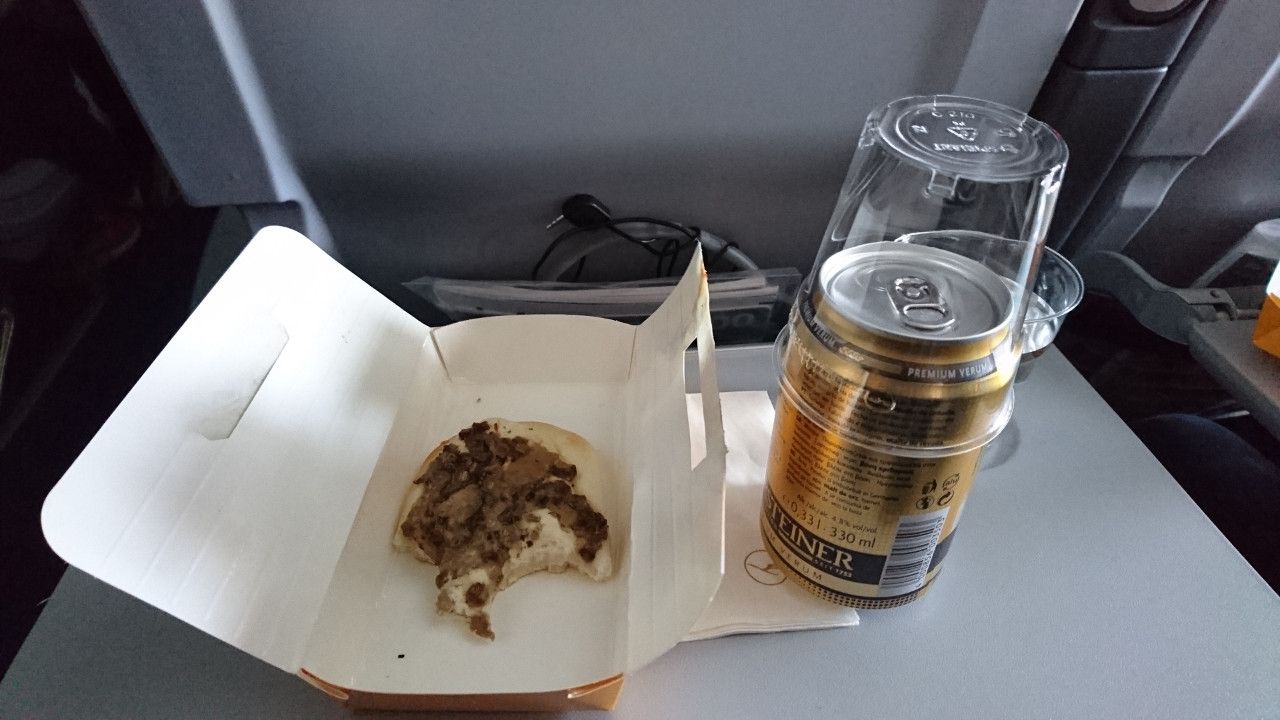 It was quite cloudy in New York as you can see from the tail cam: 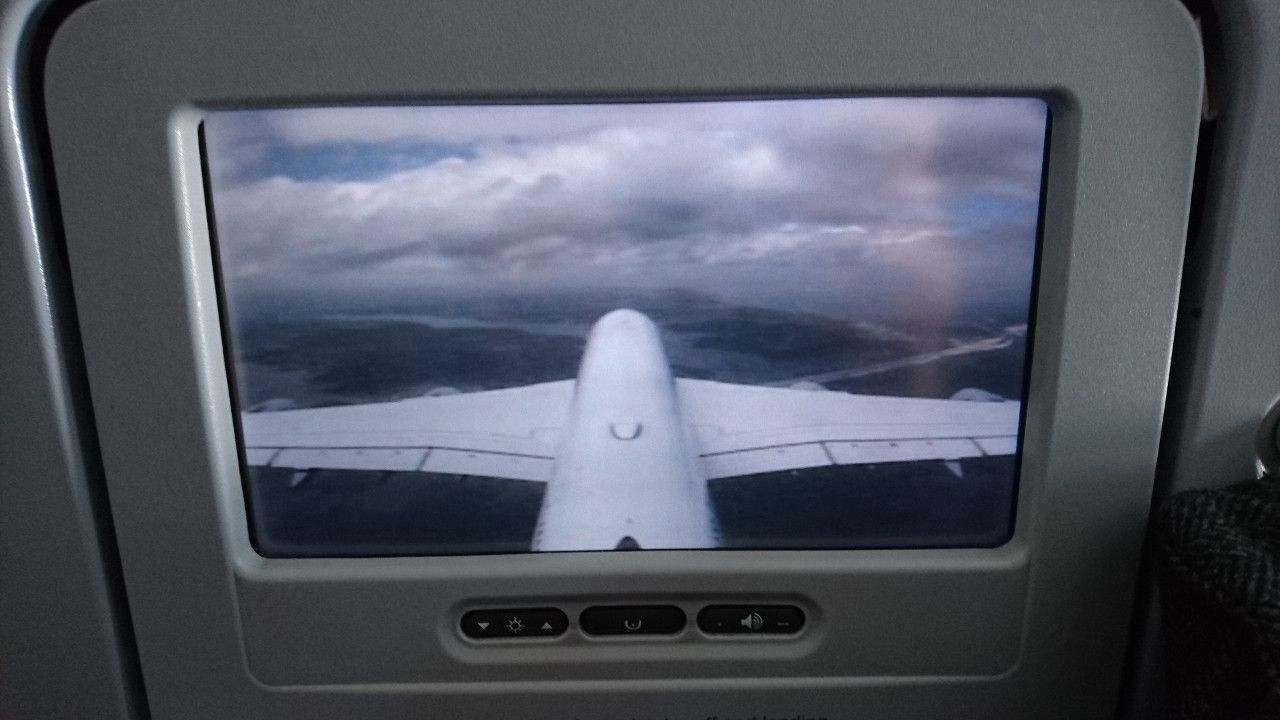 Due to crosswinds the landing was a bit harder, but still felt really safe. We were arriving on time.
Taxiing to the arrival hate took some time, again you could watch it quite comfortable with the outbord cameras: 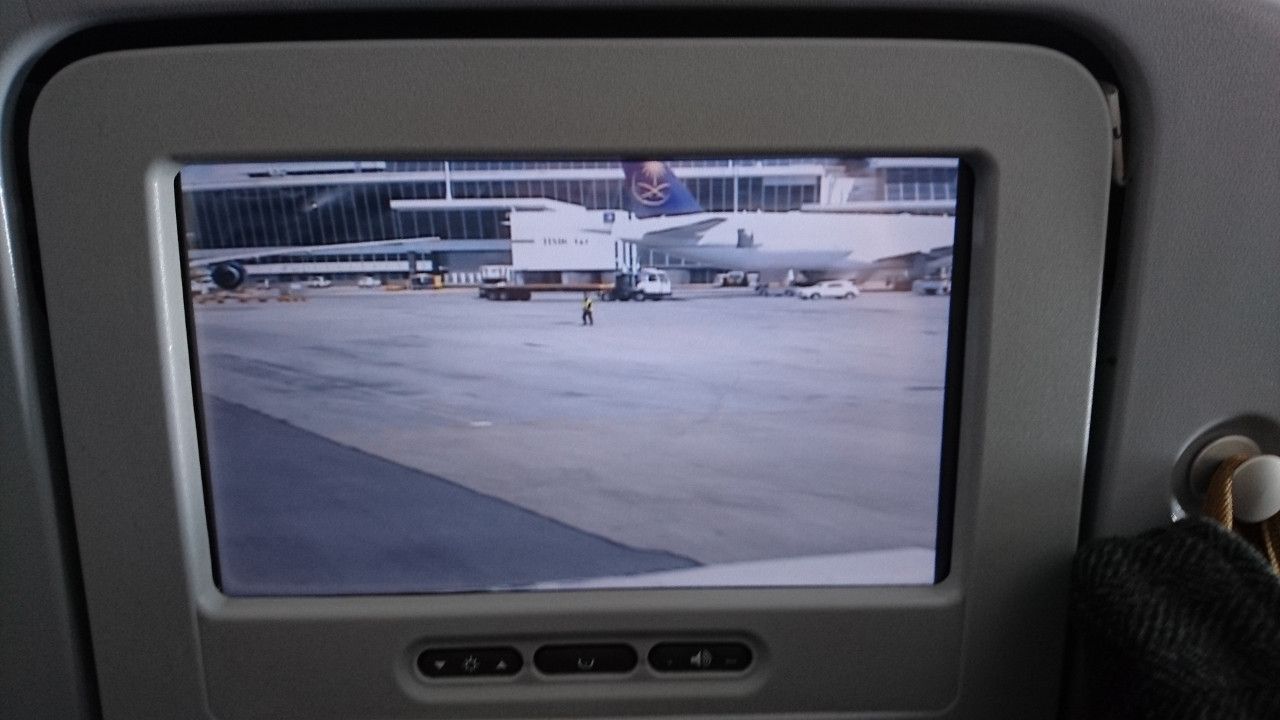 Unfortunately I couldn't make any photos of the Terminal at JFK. We took the subway for getting to our hotel, which prove to be a pretty long trip - around 1 1/2 hours :-/ 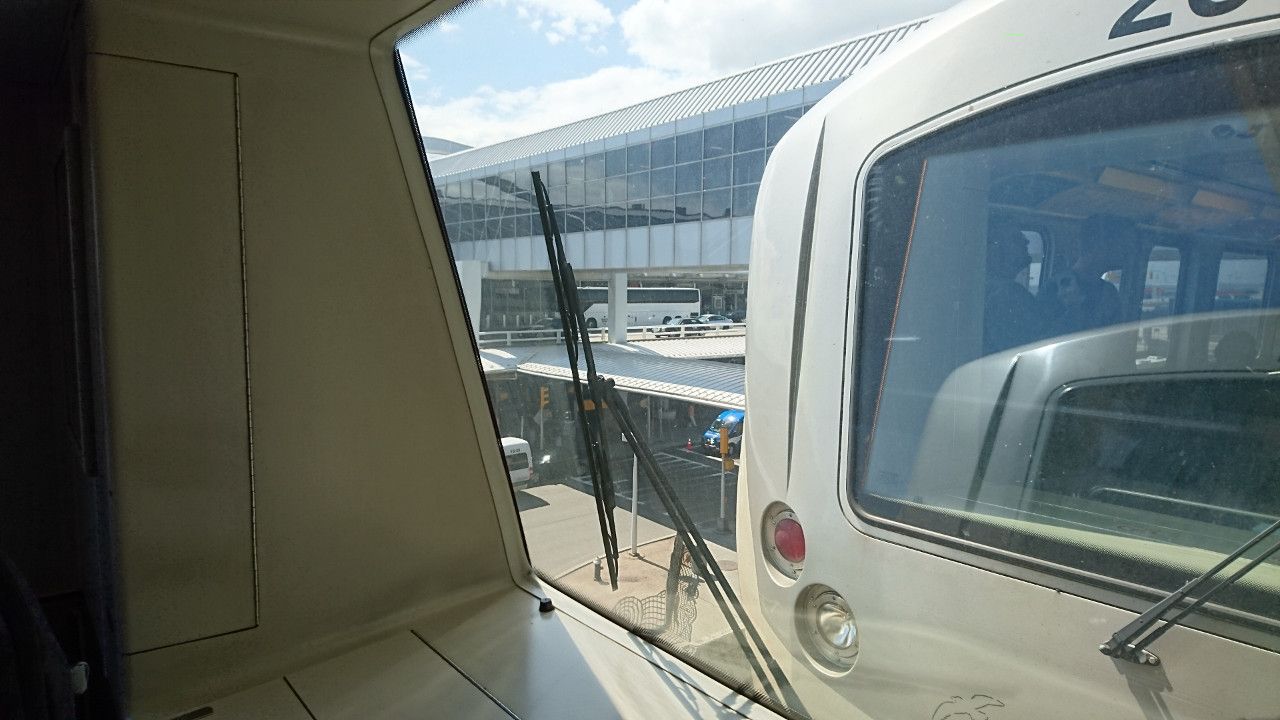 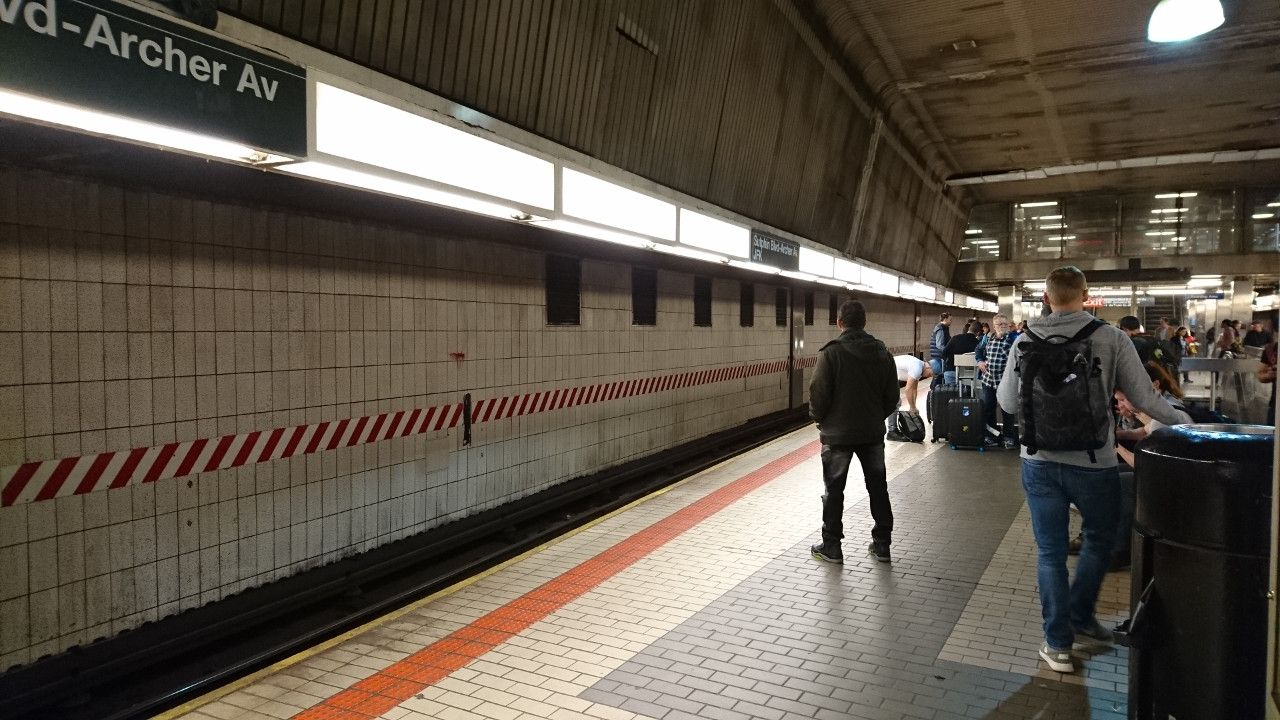 Thank You very much for reading my flight report :)

Here are a couple of photos of our trip in the USA and Canada:

View from the Empire State Building: 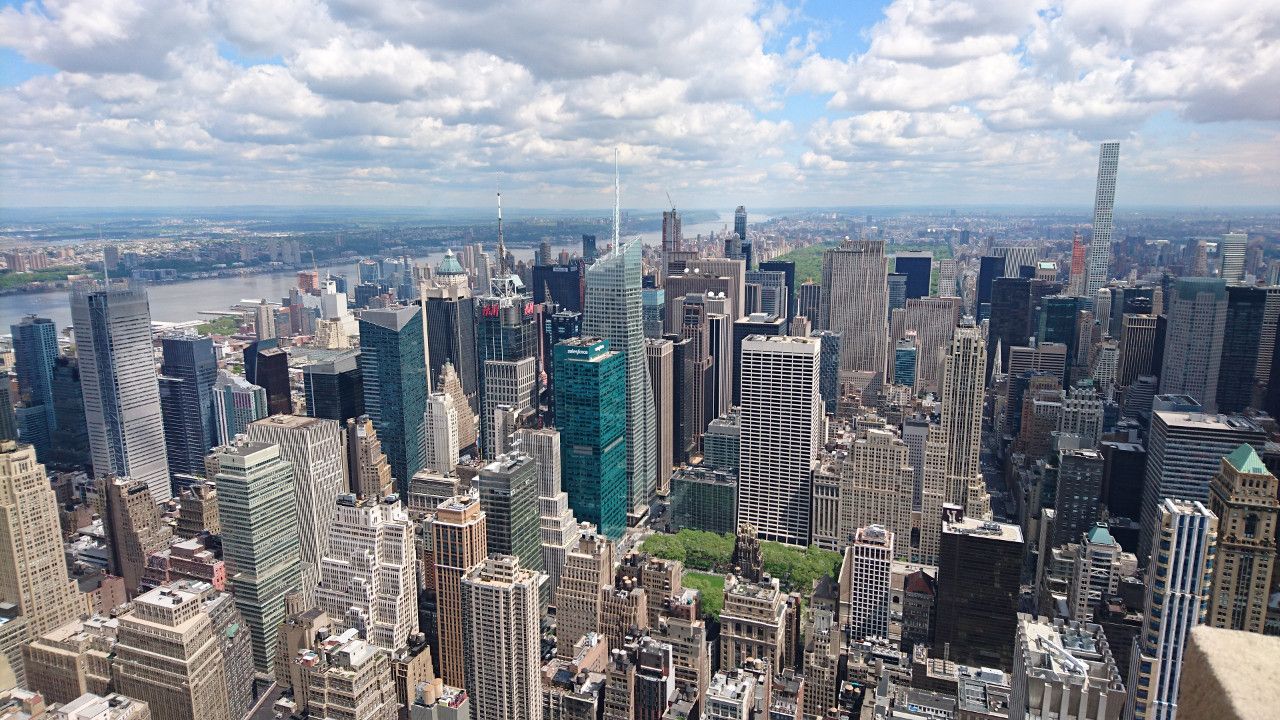 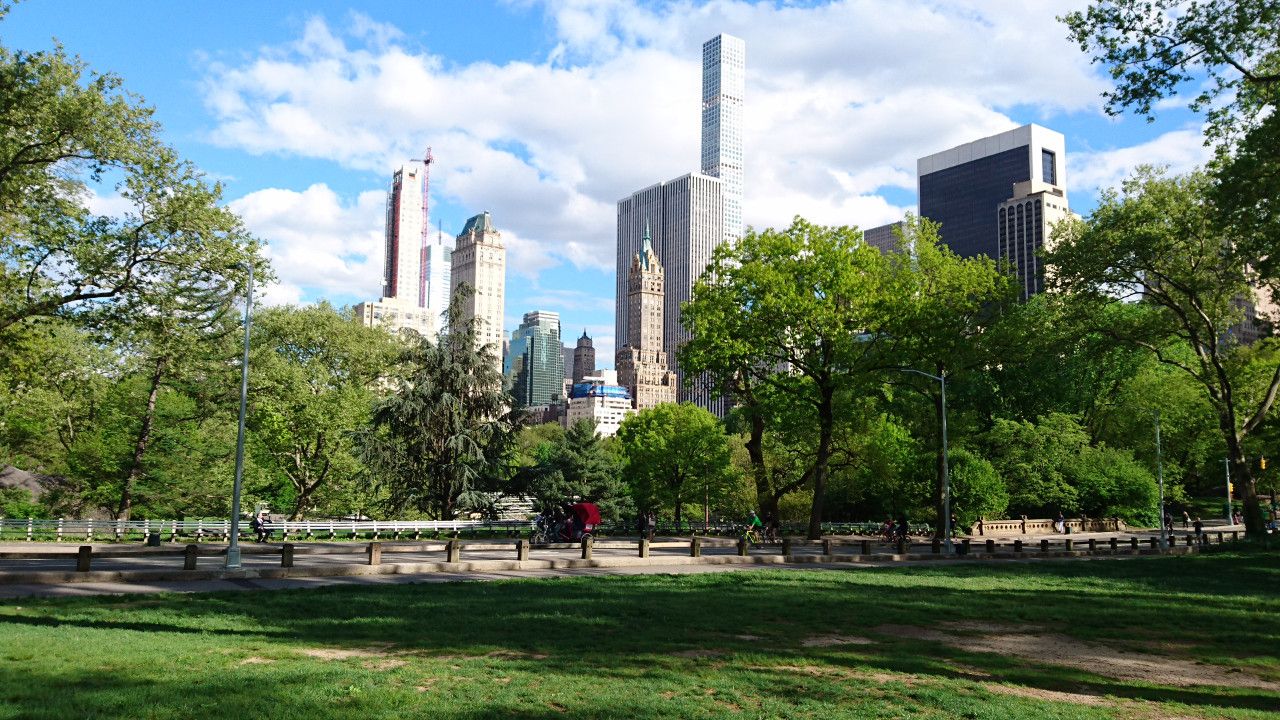 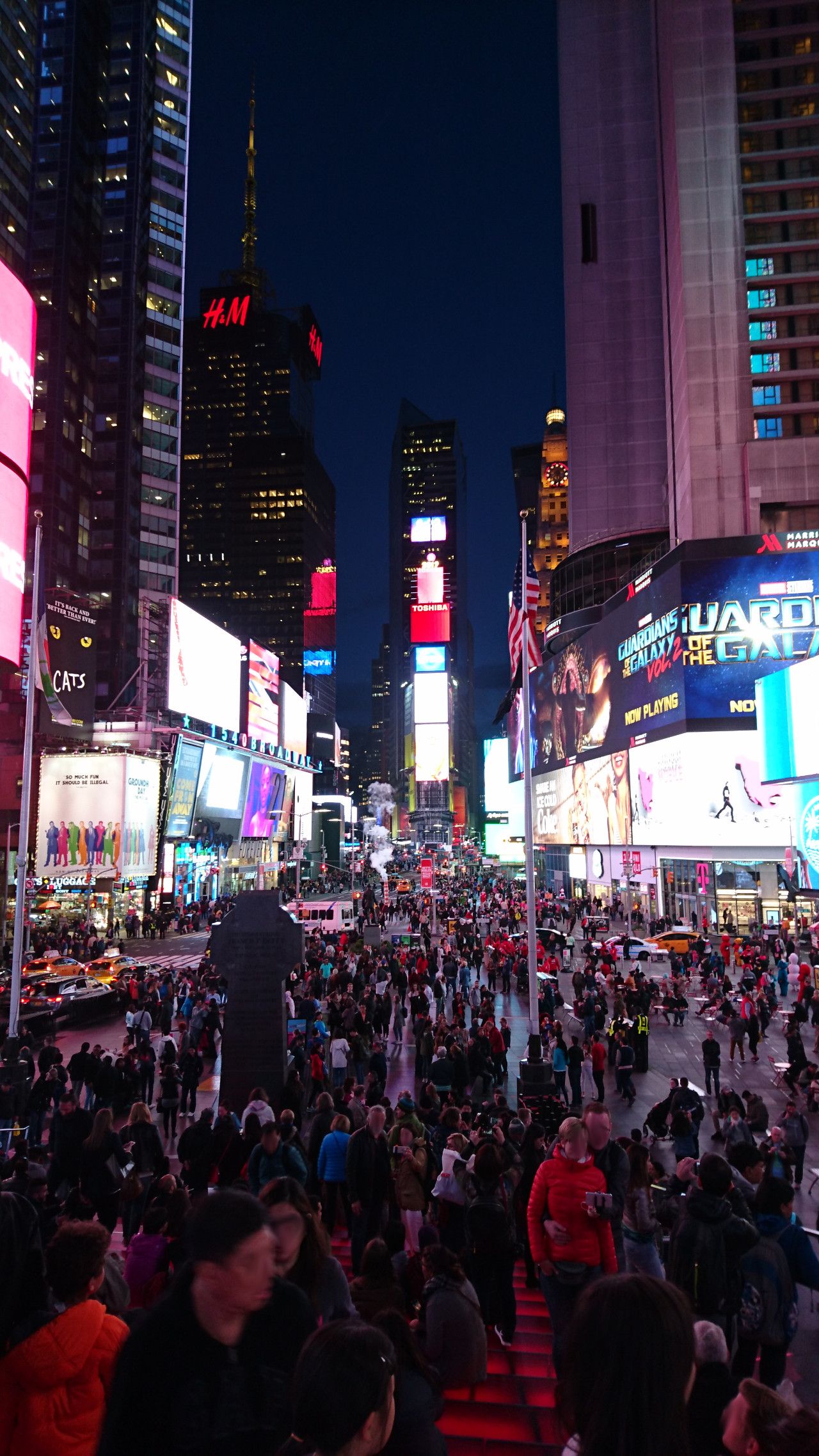 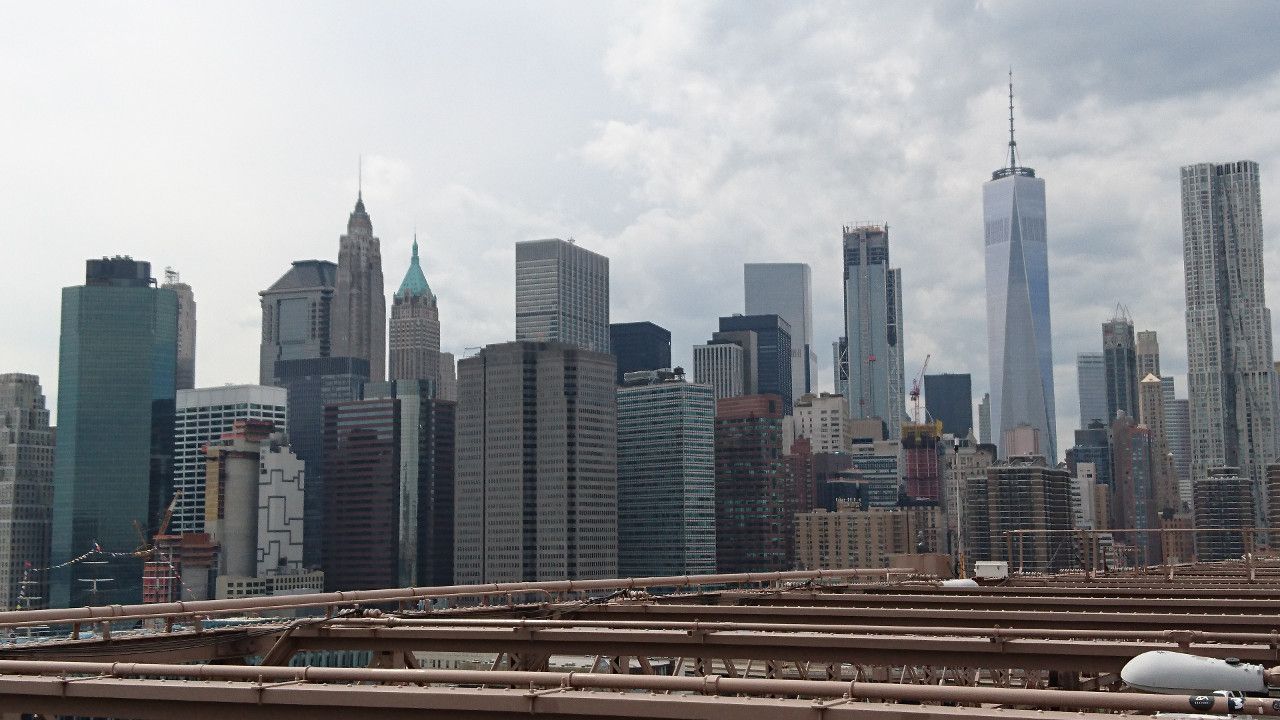 Lower Manhattan with the Brooklyn Bridge in front: 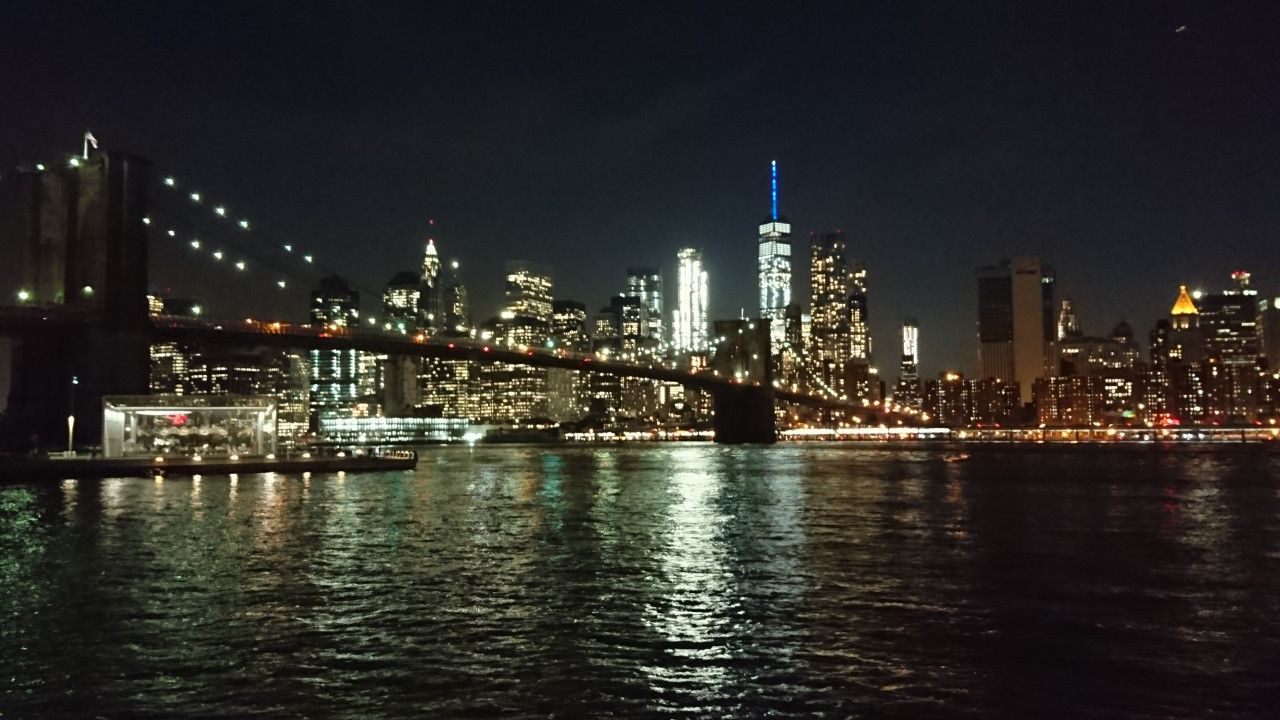 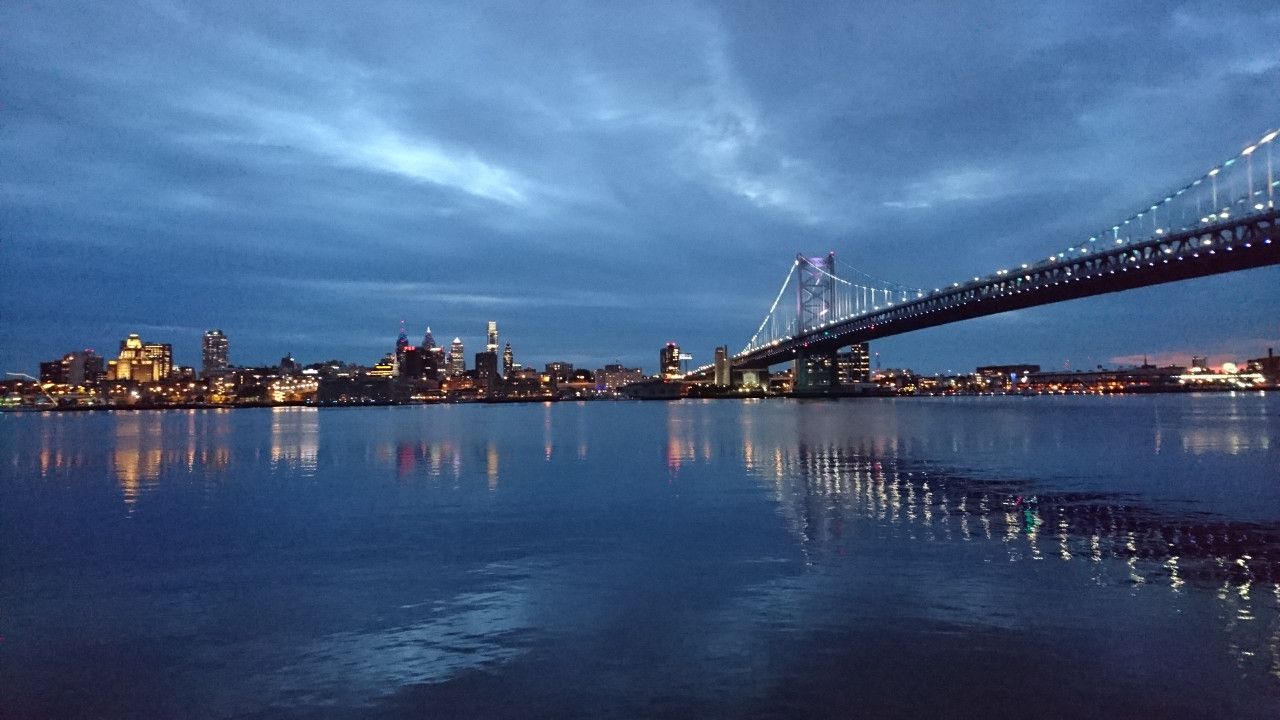 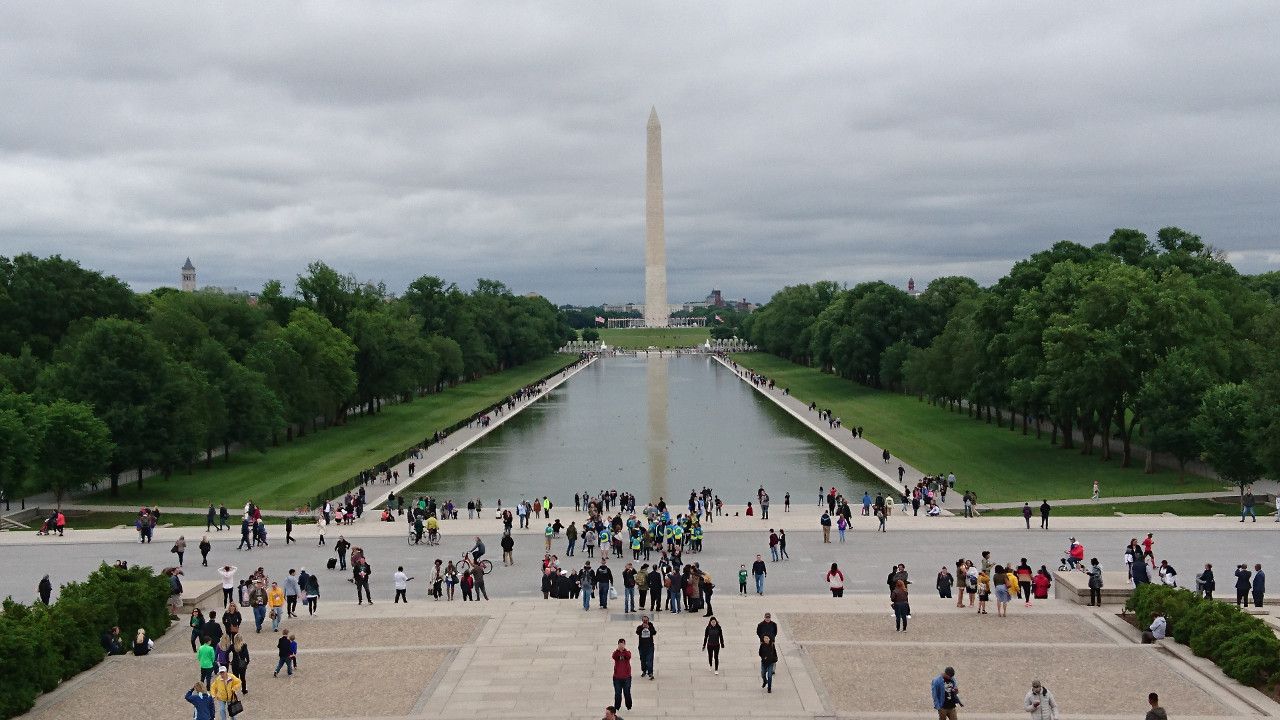 View to the Niagara Falls from Canada- with a pretty rainbow ;) 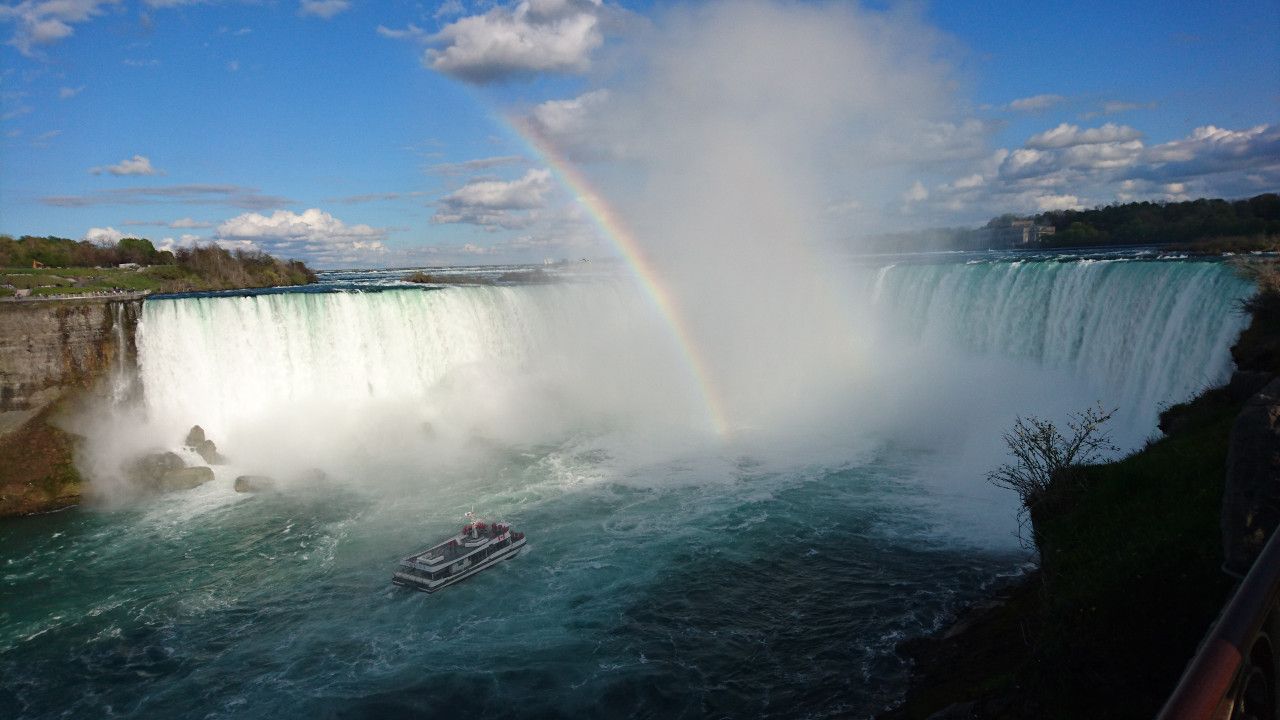 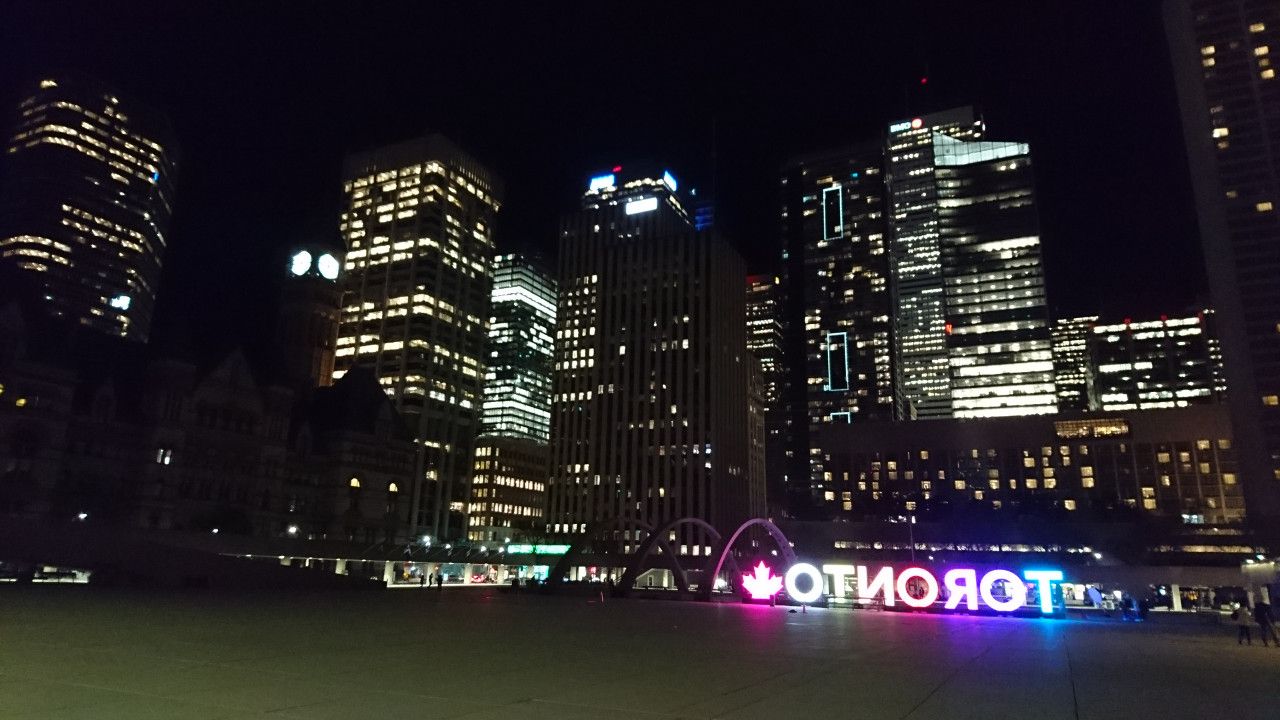 All in all it was a really pleasant flight with Lufthansa, especially when considering the price.

Frankfurt Airport: Fast check-in and security checks, but as usual in FRA looong footways.
Airbus A380: Pretty good choice for a flight of this length, seats were not bad and the cabin was clean.
LH Crew: The Crew was very friendly, nothing to complain about.
Catering: Was suitable for this flight and mainly really tasty.
New York JFK Airport: Border Control took lot of time as well as the journey to the city.

The contributors of Flight-Report published 15 reviews of 3 airlines on the route Frankfurt (FRA) → New York (JFK).

The average flight time is 8 hours and 41 minutes.