By Menzenski 691
Published on 15th October 2017
Hello and welcome to another series of flight reports! This series will cover a trip I took this summer to Banff and Jasper National Parks in Alberta.

My flight from IAD arrived on time at gate C15, about 30 minutes prior to boarding for Edmonton was due to begin. I used that limited time to grab a meal from the Wolfgang Puck Express near the Horizon gates. While waiting for my order to be prepared (which took quite a long time, nearly 25 minutes), I noticed a 757 being towed past the terminal windows. Much to my surprise, the 757 was Hekla Aurora liveried plane from Icelandair, which I had seen in Minneapolis last year. 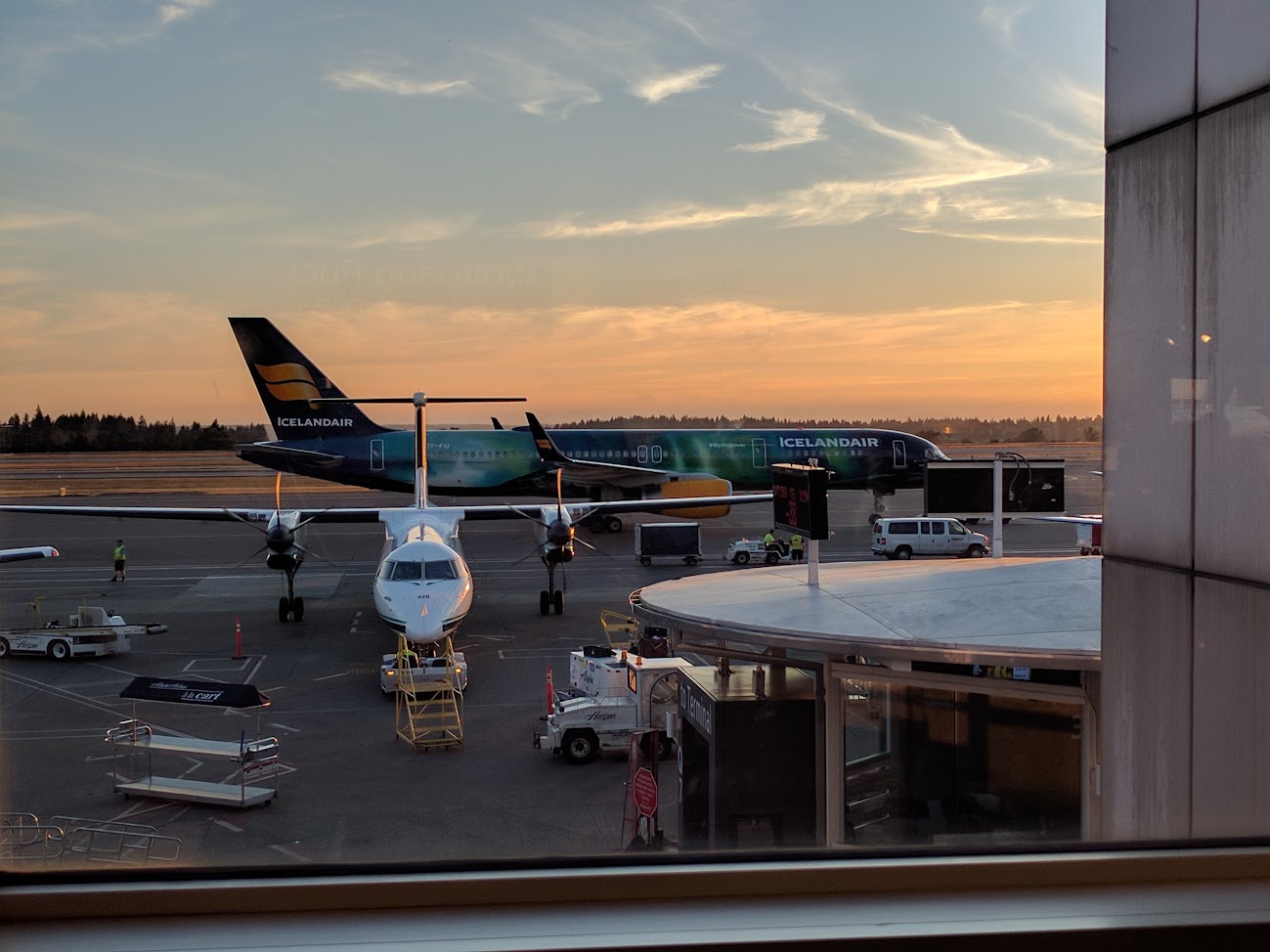 After quickly eating my meal, I made my way to gate C10E to board.

With my passport checked, boarding pass scanned, and Canadian arrival form in hand, I headed outside onto the large walkway heading down to the ramp. 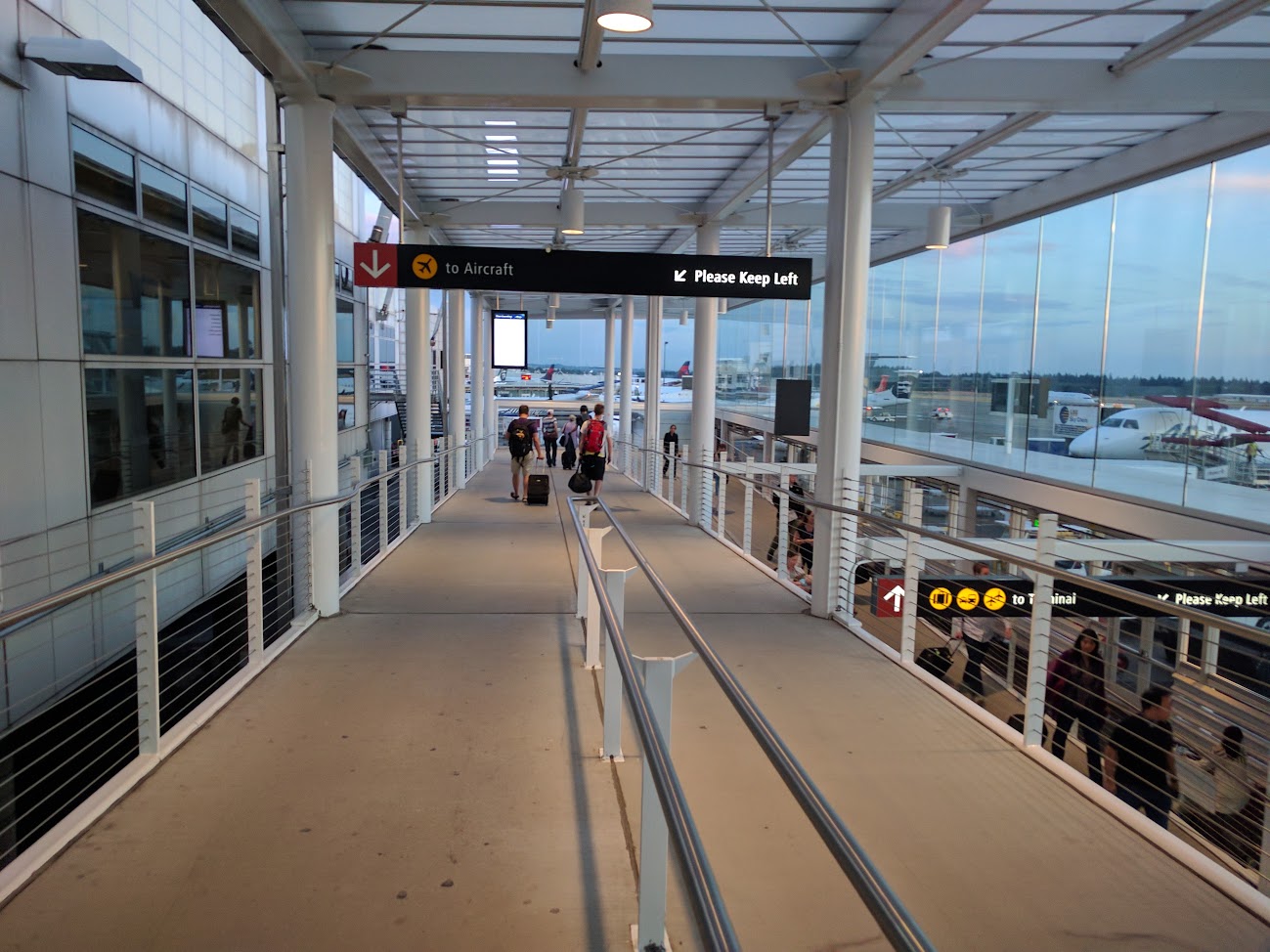 Once at ramp level, I noticed that our Dash-8 wasn't in the standard livery … 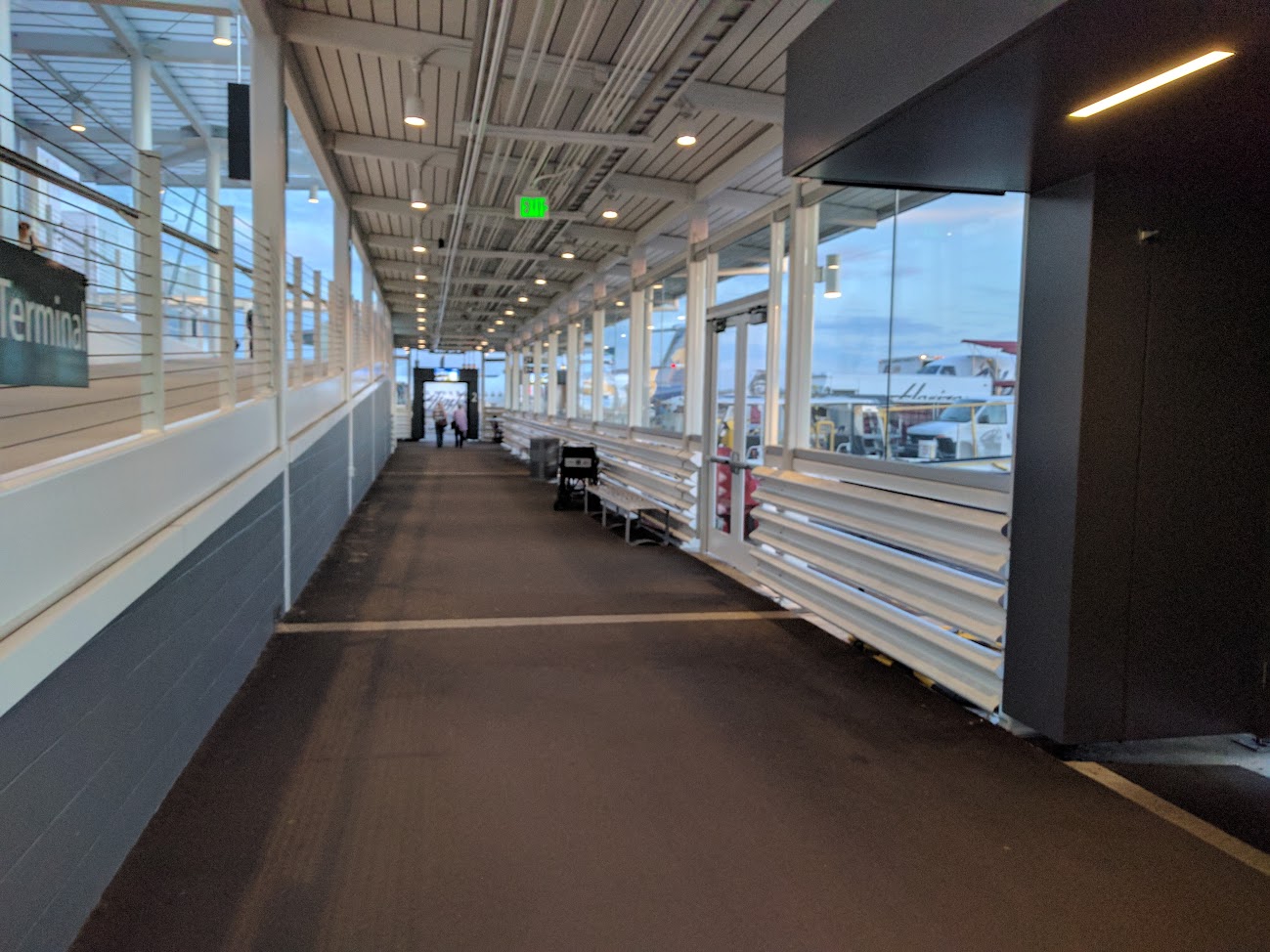 … our flight up to Edmonton this evening would be operated by N403QX, which wears the colors of Montana State University. 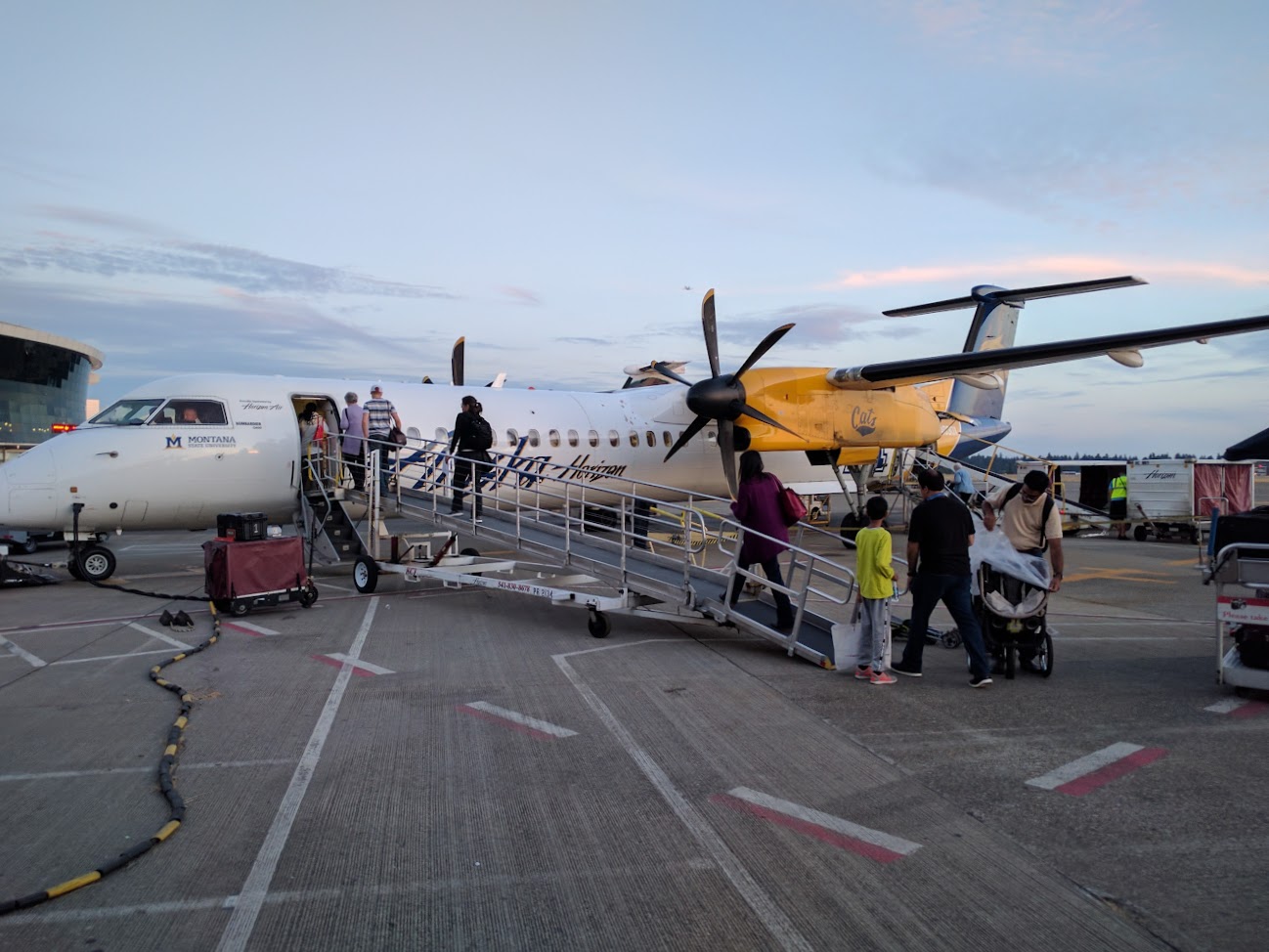 I left my carry on on the bag cart near the ramp, then headed onboard. It's been a few years since I last flew on the Q400 flavor of Dash-8 (I've flown on its older siblings, the -100 (retro-livery report here) and -200 versions plenty of times), and remember it being slightly more roomy than a typical CRJ or older Dash-8 cabin. However, for whatever reason, when I reached my seat in row 4, I was surprised at how small it appeared – It basically looked identical to a CRJ-200 seat. Since I was quite tired and likely would not have a better chance, I went ahead and completed my Canadian arrival form before the boarding door was closed – it was quite difficult with the tight seating.

A quick look out the window. 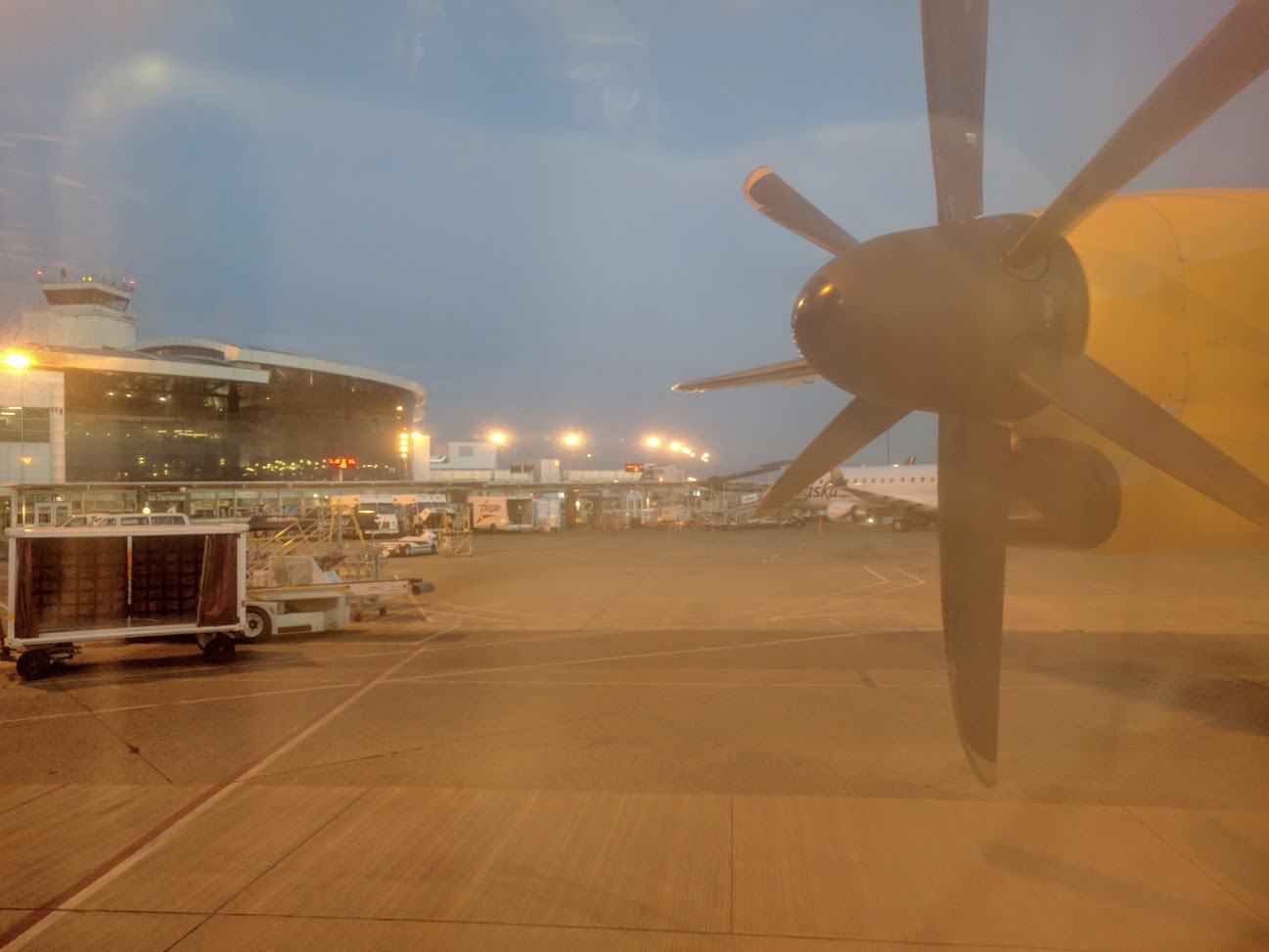 The outside pane of the window was covered in condensation, so I didn't even try taking any pictures while on the ground. We left the stand right at scheduled time, and made our way to runway 16L for departure. A short takeoff run then commenced, with a left turn back to the northeast.

Shortly after depature, I was treated to a great view of Mount Rainier and the Cascade range, as well as a nearly-full moon. 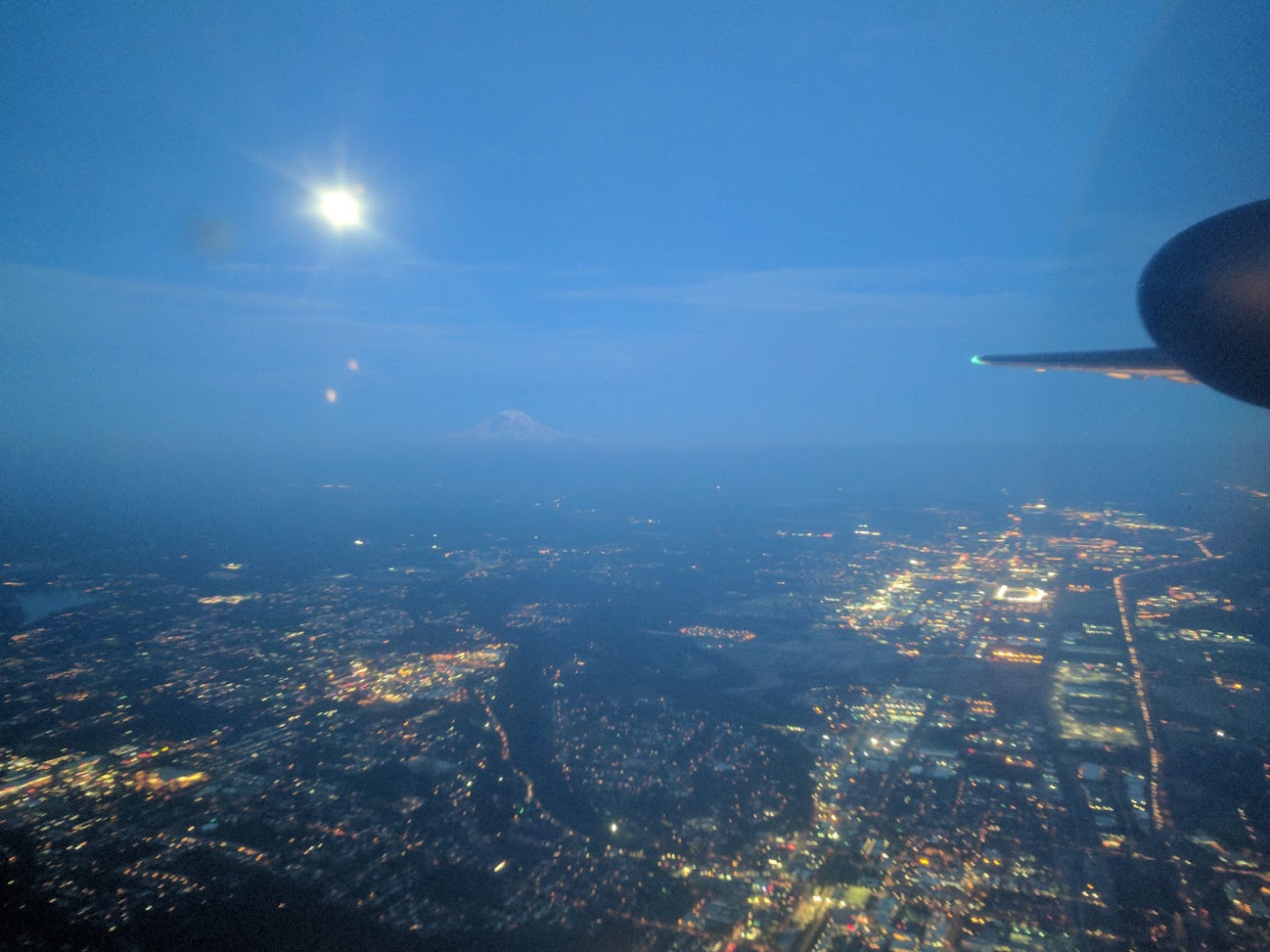 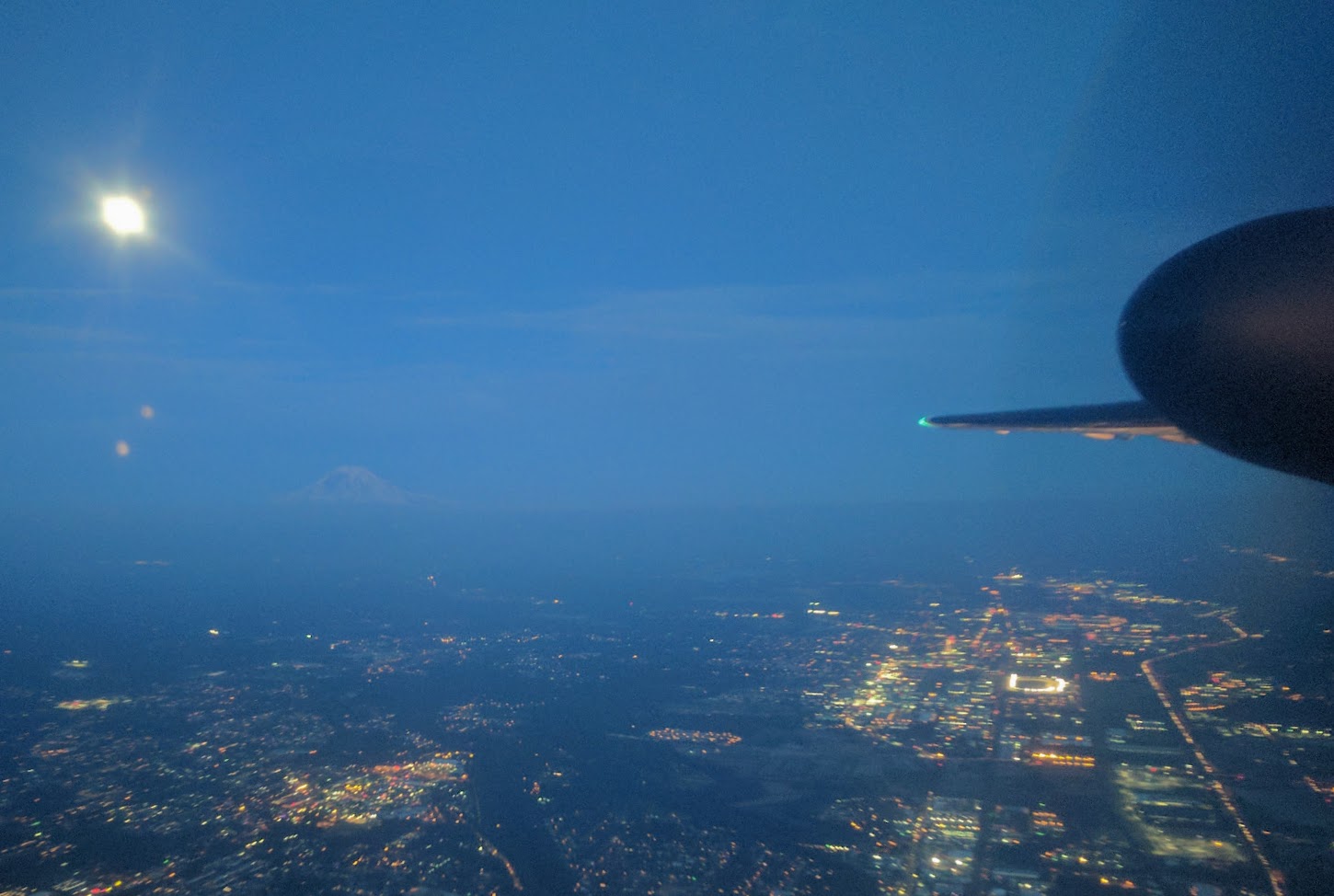 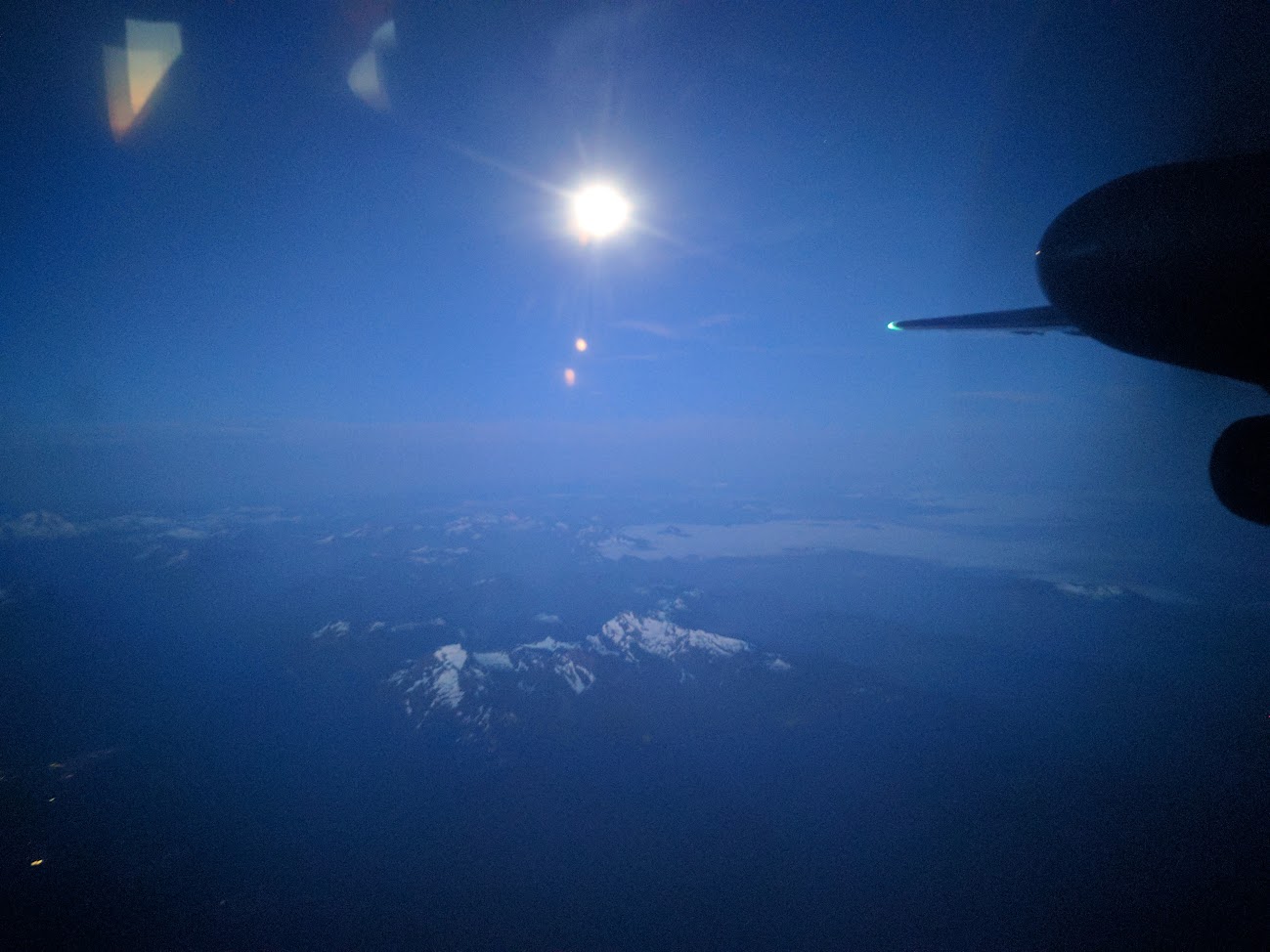 The inflight service started about 15 minutes after departure. Long before this flight, I had read about how Horizon's service included complementary alcohol, so I had an inkling of what to expect. However, I was quite surprised when the flight attendants announced which beer was on special on this flight: 12th of Never from Lagunitas Brewing. Lagunitas is a favorite brewer of mine, so I was quite excited to try a new-to-me beer from them. 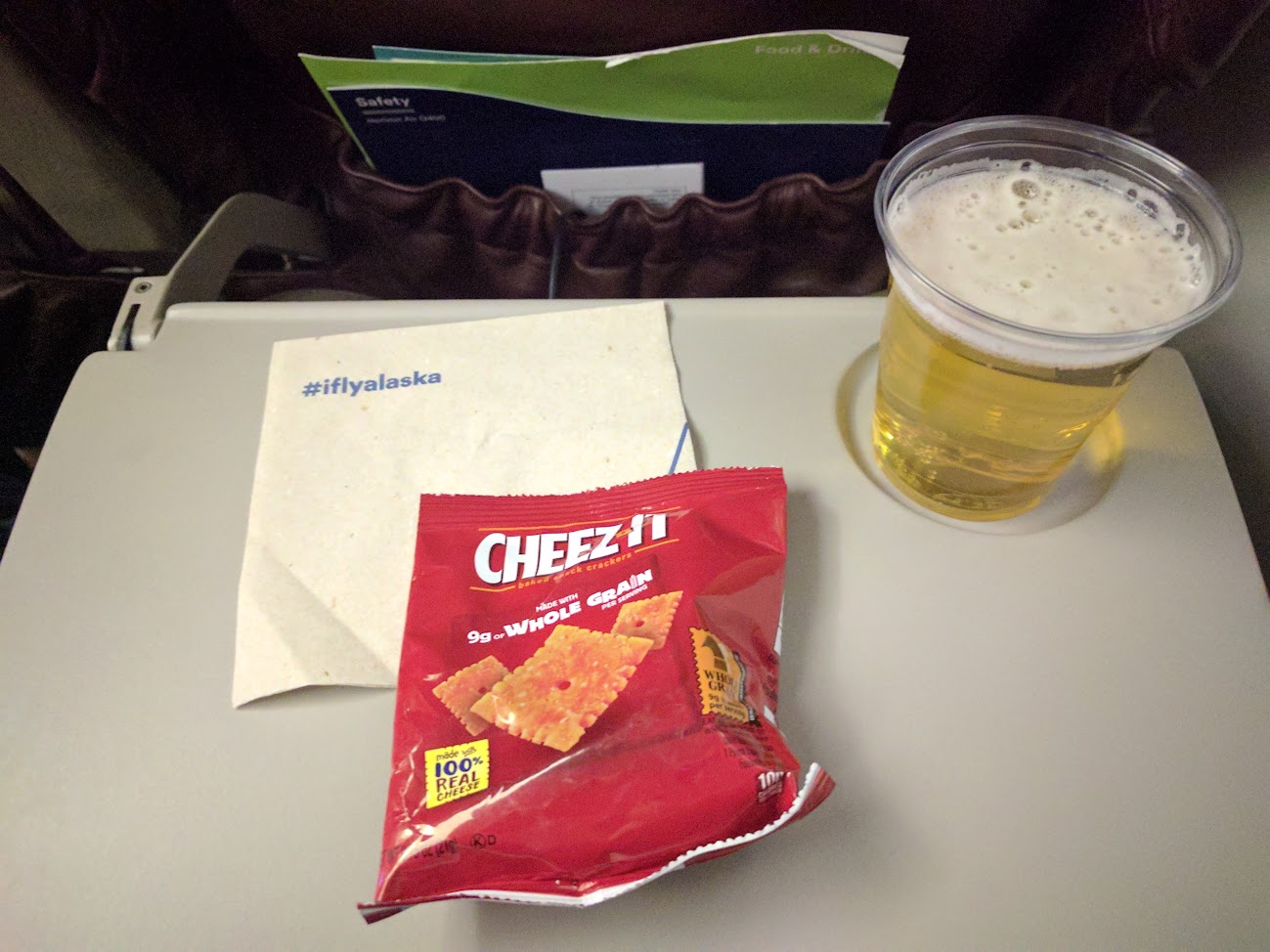 The beer was quite good, especially after a long evening of flying across the continent. I also really enjoyed the non-traditional airline snack of Cheez-Its.

Because Edmonton is so far north, and because this flight took place just after the summer solstice, most of the late-night flight across the Rocky Mountains was well lit. The other side of the plane received a stunning sunset horizon for the majority of the flight.

After a relatively long cruise, we started descent into the Edmonton area. 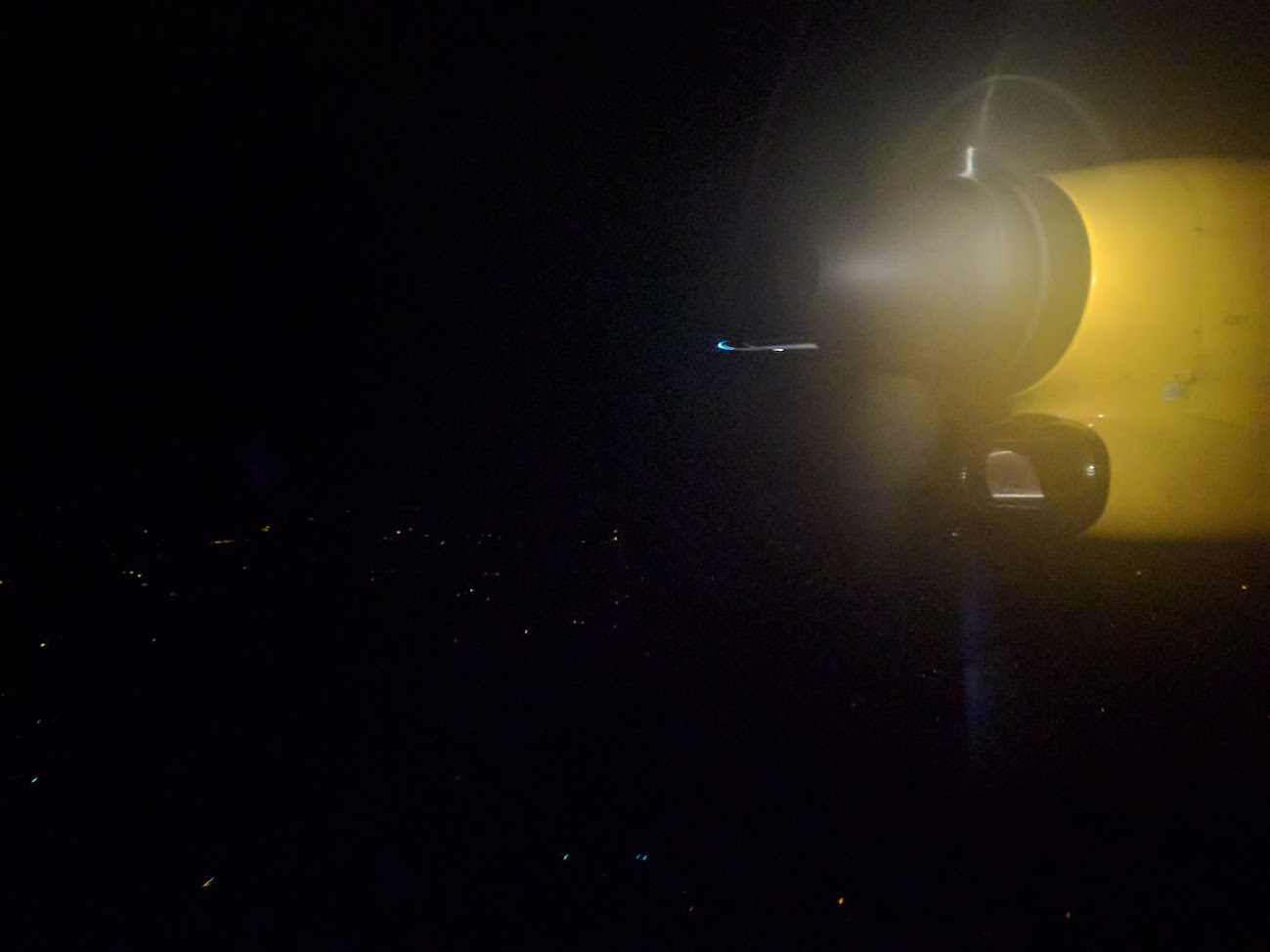 There was quite a lot of thunderstorm activity during our descent, unfortunately much beyond my phone-photography skills. We landed on runway 02 just after midnight, after exactly 90 minutes of flight time. 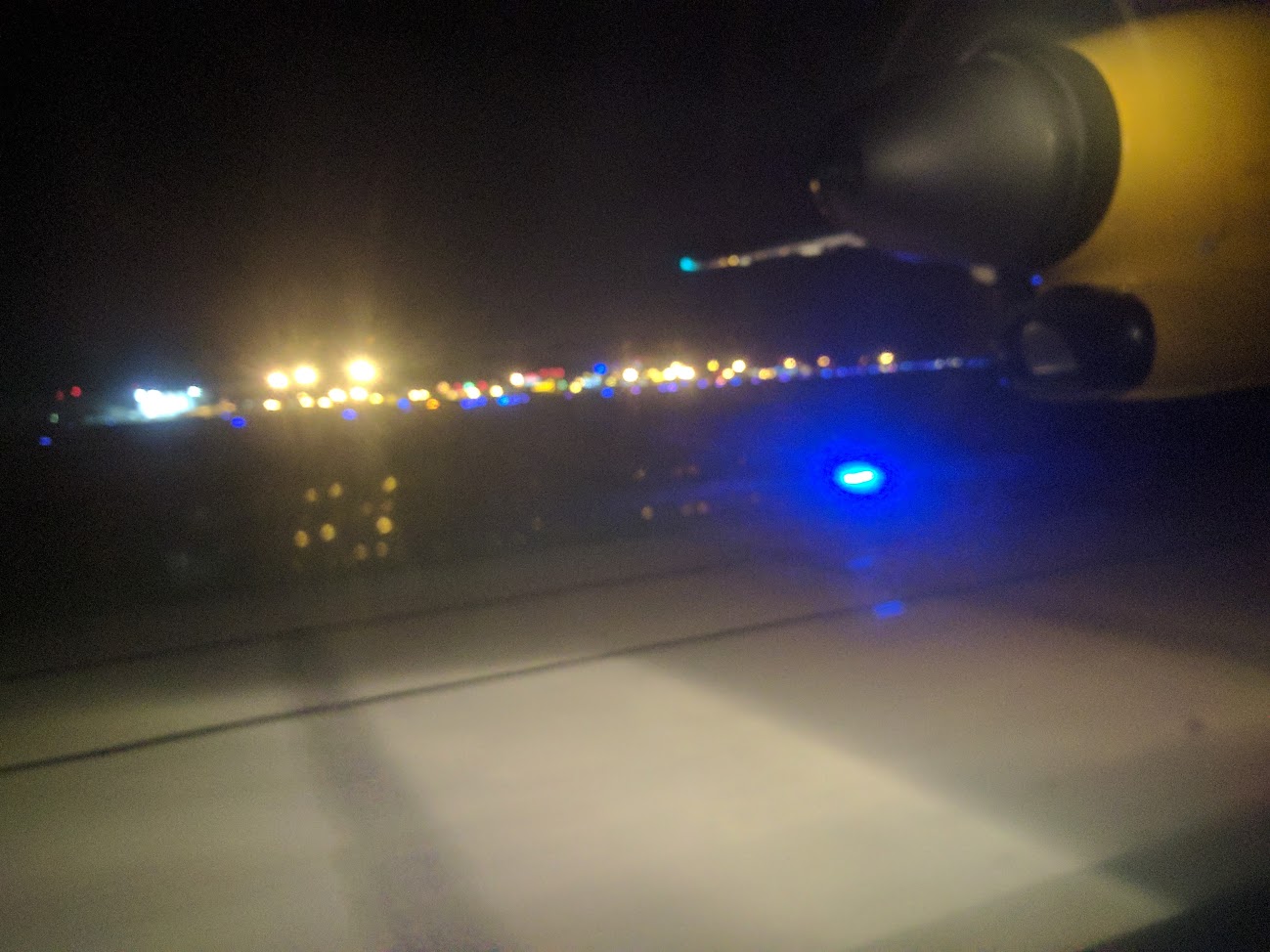 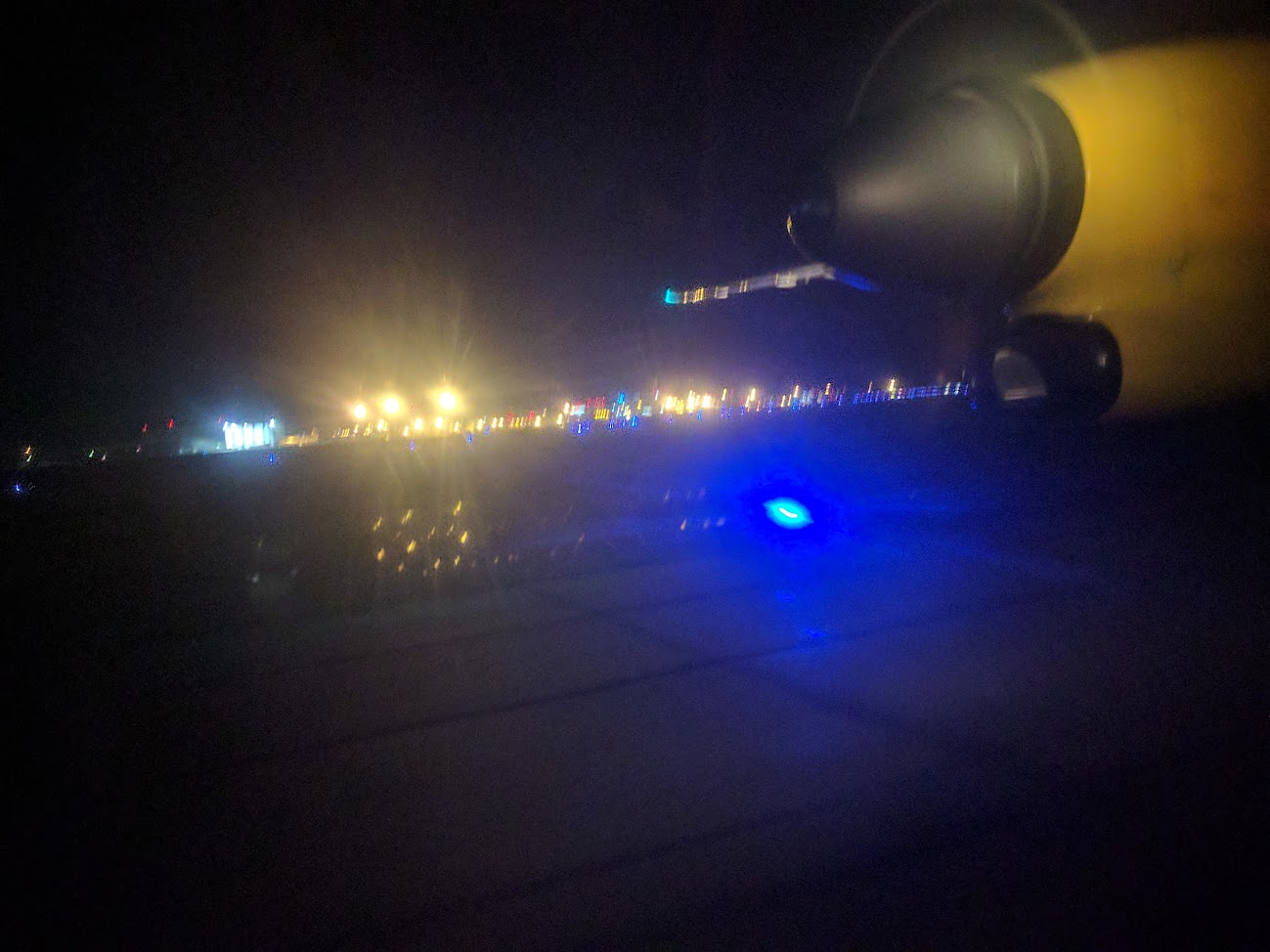 We then had quite a long taxi around to stand 86, at the far end of the terminal. We arrived next to an A319 which had arrived earlier from Denver.

Deplaning was pretty quick because I was in row four. However, because it was a Friday night, there was a trainee operating the jet bridge, and it took a few minutes to get it attached to the aircraft.

After retrieving my carry on bag inside the jetway, it was quite a long walk down a sterile corridor to immigration and customs – there was a very short line, however, once I got there. I was quickly through to meet my friend, who is a part of the Nexus program, who made it through even faster than I had.

A few pictures of Jasper and Banff National Parks coming in the next report!
See more

Once in flight, Horizon is quite good. Since they operate mainly shorter routes with the Dash-8, the tight seating is less of an issue -- the free alcohol is a huge plus. However, I can't overlook the fact that I was originally supposed to arrive into Calgary -- that flight was cancelled due to a schedule/pilot issue with which Horizon is currently plagued. It would have been better had that flight not been cancelled. However, Horizon was quite good on this 90-minute flight up to Alberta.