By marathon GOLD 800
Published on 21st February 2018
This was the first leg of my return from a week-end in Mainland China from Taiwan.

The number of flights serving Wuyishan was on par with the limited fame of this national park : nine flights per day to/from CAN via XMN, XIY, SZX via XMN, PEK, FOC and three to XMN, before the last flight of the day to SHA on the next screen. All but one were operated by Xiamen Airline which was at home there. There was zero international flight then. 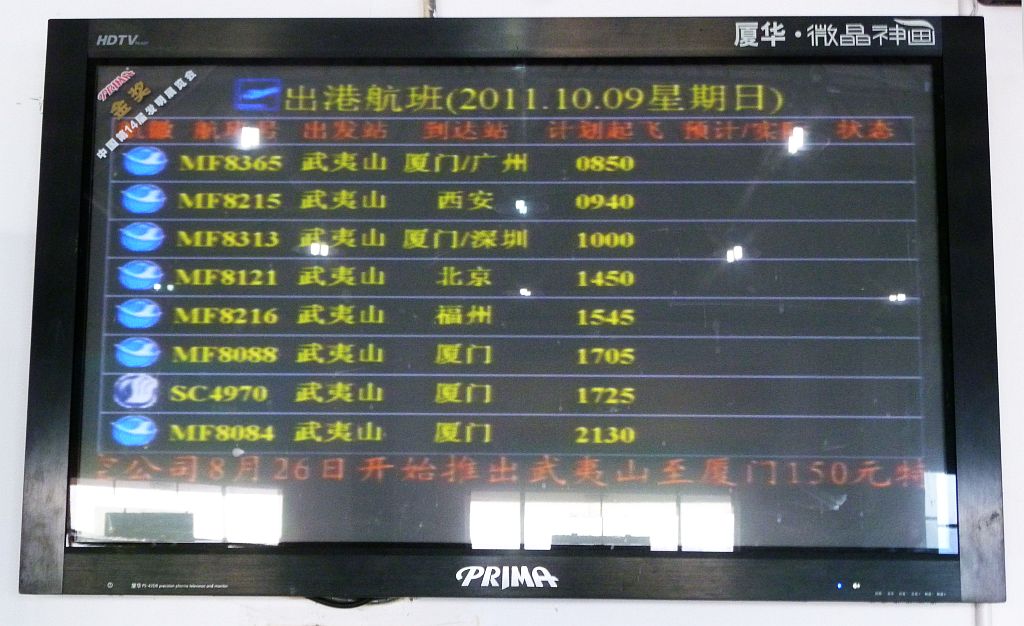 Six and a half years later, the website of WUS shows an interesting evolution :
- there are now 84 departing flights per week, i.e. 12 per day
- the number of destinations has grown dramatically, from 6 to 14, over half less than daily.
- Xiamen Airlines has lost its dominance : Shandong Airlines has 36 slots, China Eastern 20 slots, Xiamen Airlines 14 slots and Air Guilin 14. (I had never heard of the latter!)

Also note that there are now two quasi-international flights per week to HKG (HKG is in China, but for all practical purposes when flying is managed like an international destination), which means that there are customs and immigration facilities for the sole purpose of these two flights.

Let’s go back to 2011 and to the terminal then where only the panoramic stitching of several pictures give the impression of a vast hall.

It is politically incorrect to write that I was the only foreigner on board because there was a group of Taiwanese who were most likely going to go home like me via the Kinmen ferry. Checking in was very quick, and so was asking to change for a window seat.

The boarding room was not more full than that, but the group of Taiwanese had not arrived yet.

Arrival of the plane from Xiamen, preceded by a Follow me car

… and setting up of the stairs (there were no jetbridges then).

The walk on the apron was a long one to the left end of the terminal, as seen from the plane.

It was shorter for us because we were at the other end of the terminal.

My picture of the two rows of business class was better than on the way in thanks to natural light. 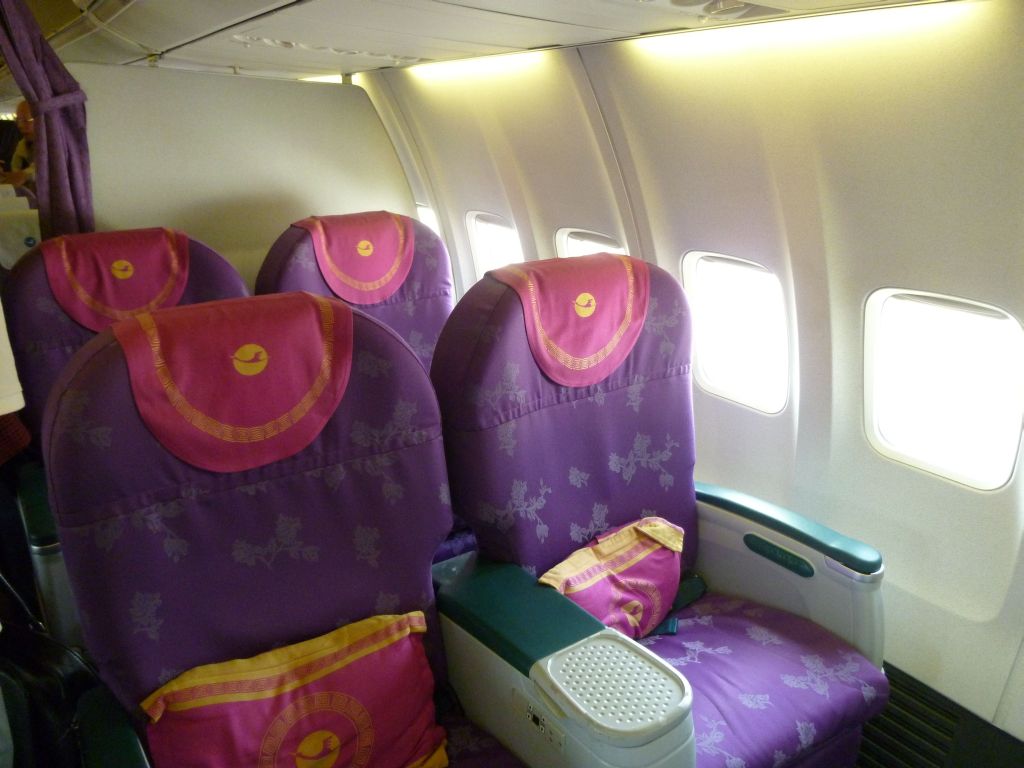 On the other hand, my window seat turned out to be a non-window seat, because I was seated at the level of the E in XIAMEN on the fuselage. There was a window on the right, but not on the left: a peculiarity of the 738 that I discovered that day (Boeing’s engineers did not bother to adjust the length of the frame plugs, unlike their Airbus colleagues). The comfort grade of MF took an instant beating, because it was a nearly full flight and I had no chance to find a reall window seat. I nevertheless managed to take pictures through the window behind me, without looking. 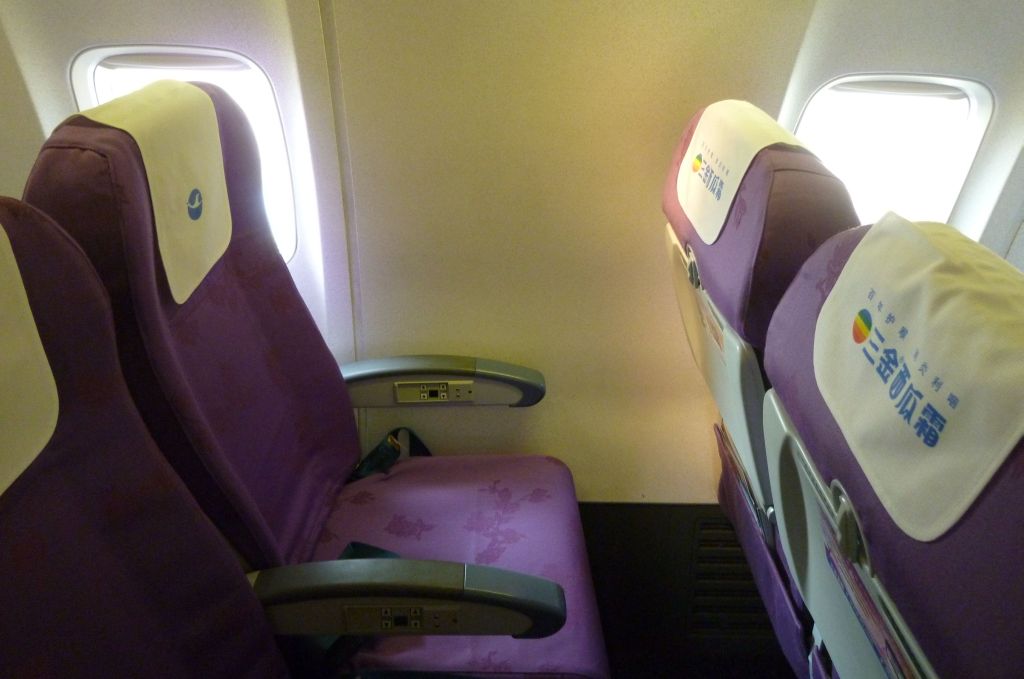 The rest of the cabin was quite usual and the seat pitch was decent, like in all Chinese 738s. I don’t like much this mauve color, but it is a pure matter of personal taste. 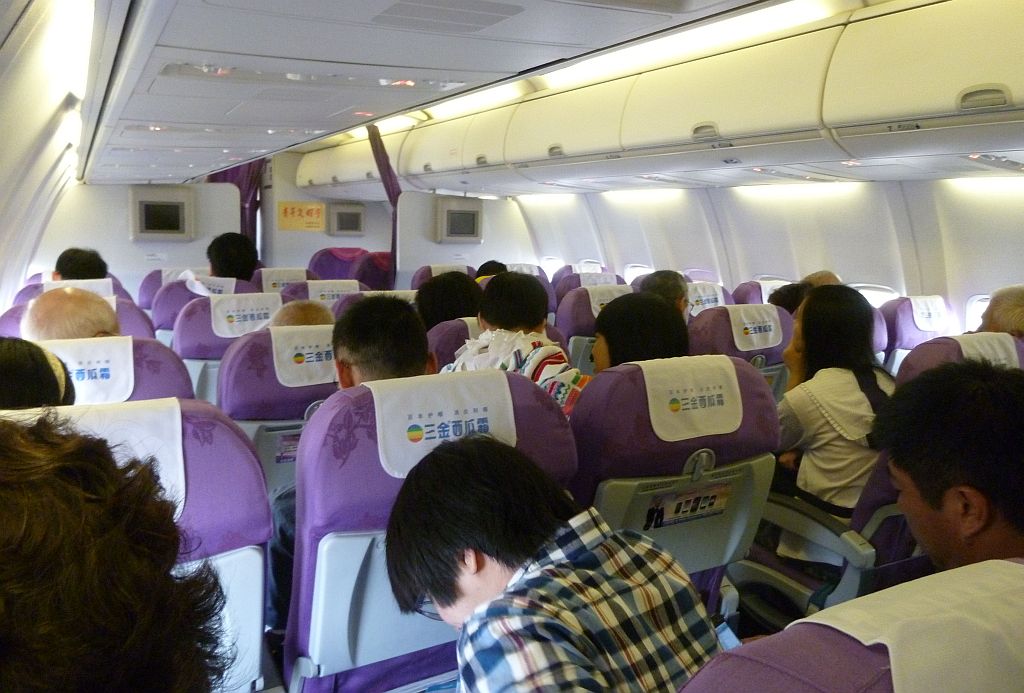 Take-off: my unfavorable seat makes me miss a picture of fighter jets (covered with tarpaulin, and therefore hard to identify) lined up near the runway threshold. 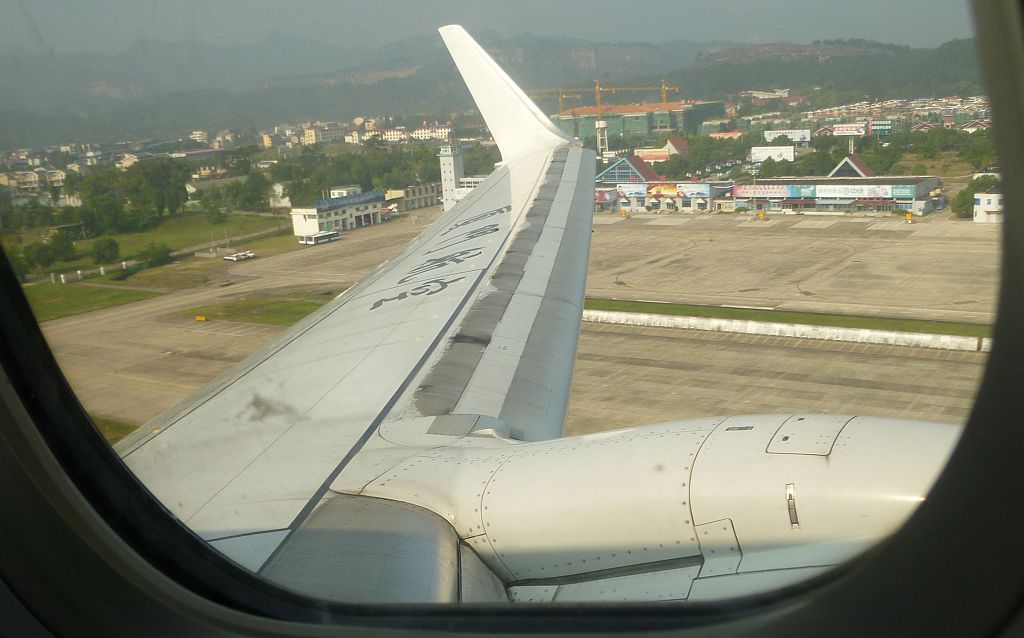 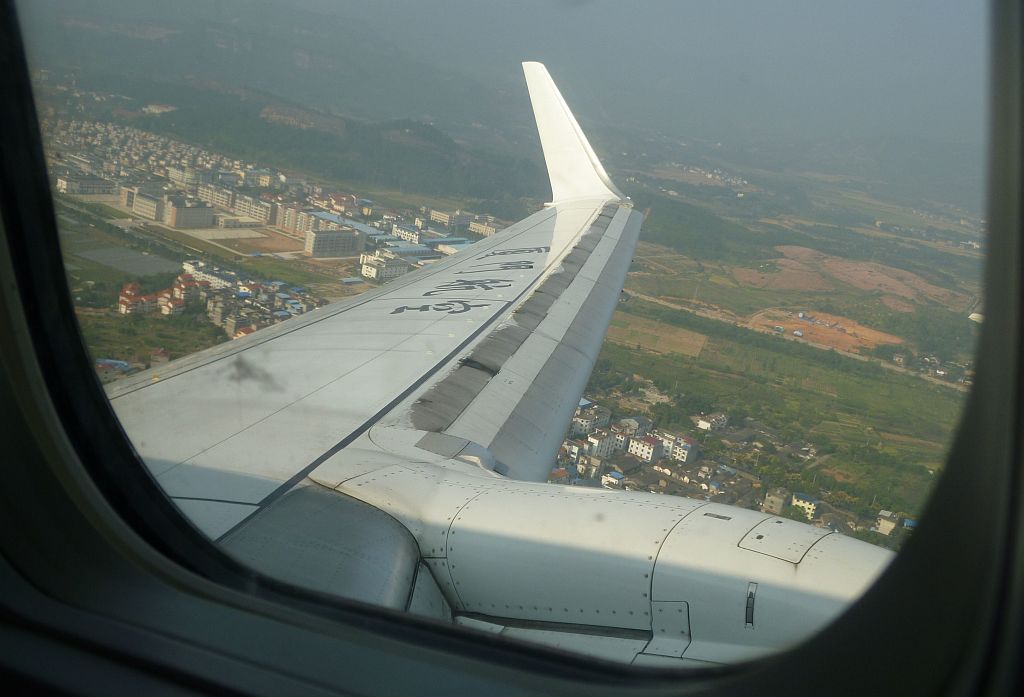 Up in the blue sky 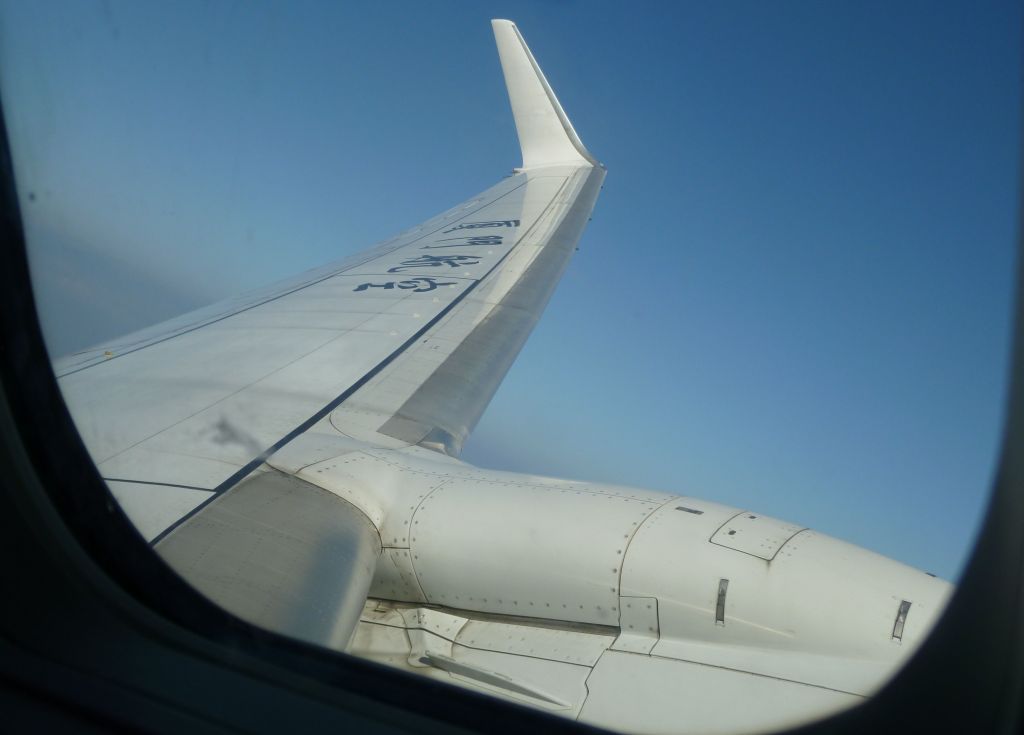 The catering was nearly the same as on the way in, with the sole difference of the replacement of 40 g of peanuts by 20 g of peanuts and almonds, plus 20 g of dried kumquats. 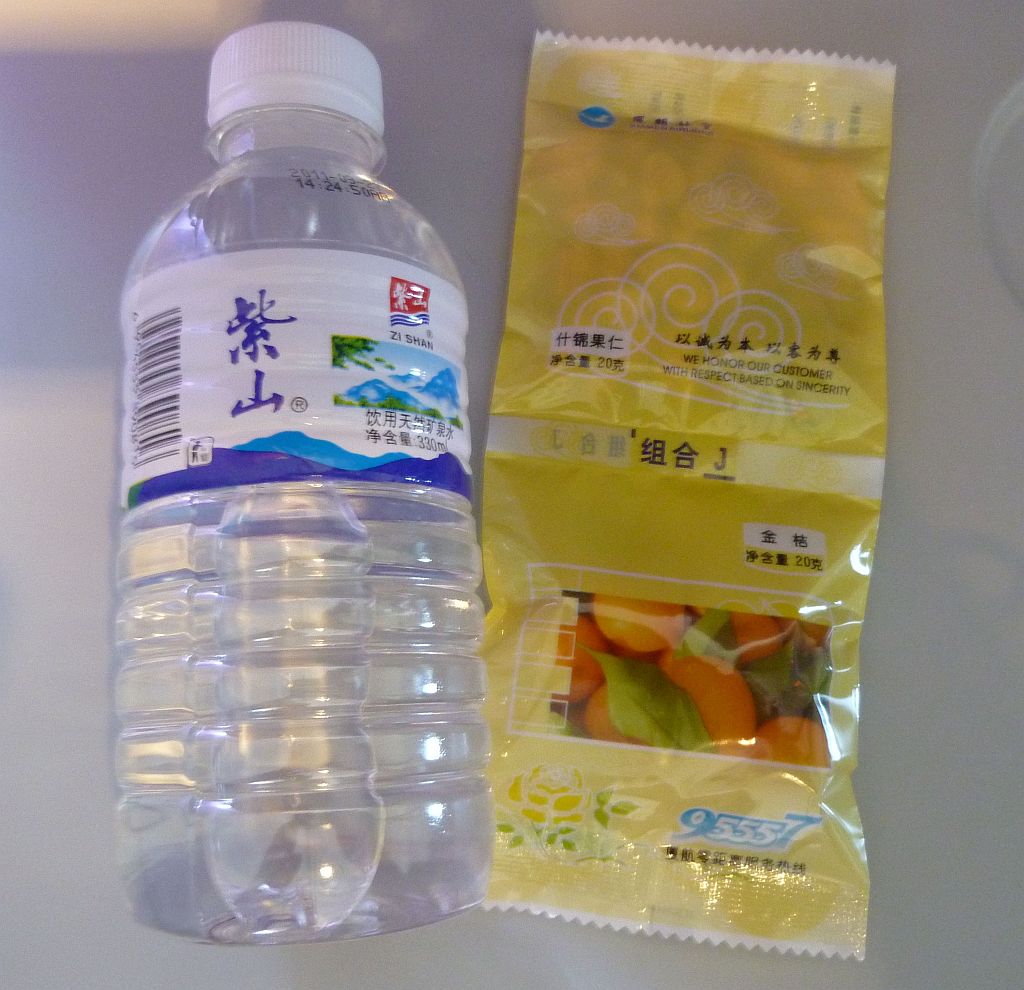 Decending towards Xiamen. Xiamen, as you probably know, is in fact a large island at the bottom of a deep bay, about forty kilometers around, i.e. close to the 42.195 km length of a marathon. The existence of flat coastal road allows therefore Xiamen to host a renowned marathon where an usual record was set in 2009: 40 out of the 100 first runners were disqualified for cheating. All were Chinese high school students who hoped to gain a few bonus points at the feared gaokao 高考 (the end of high school exam which determines their fate for univeristy admissions), if they clocked in below 2h35’, a national level performance that I never dreamed approaching. 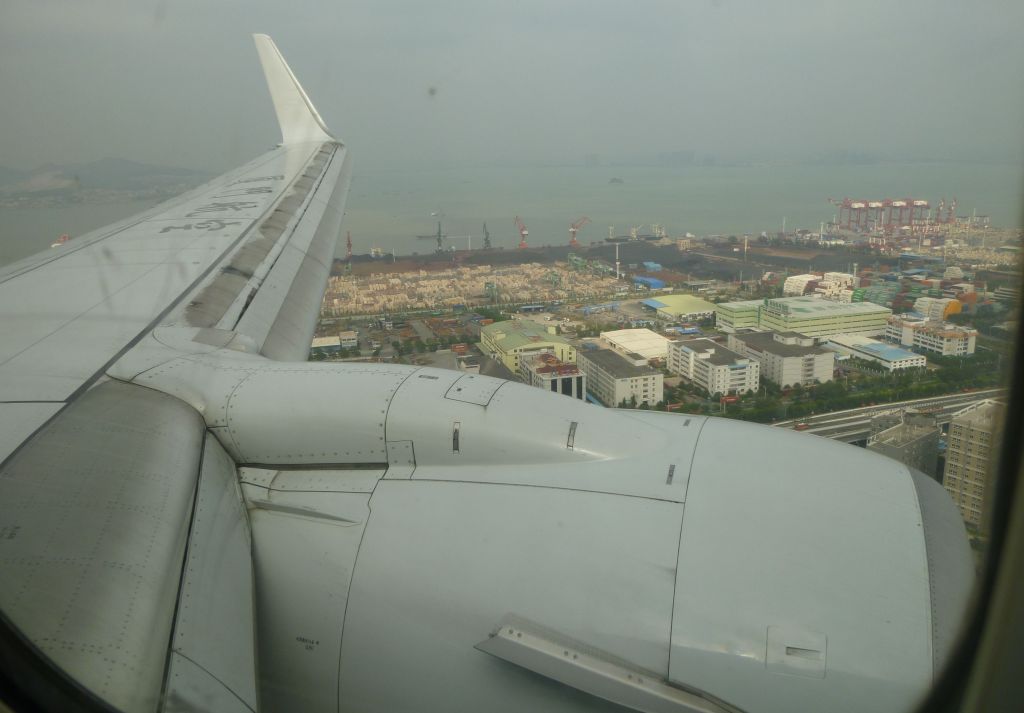 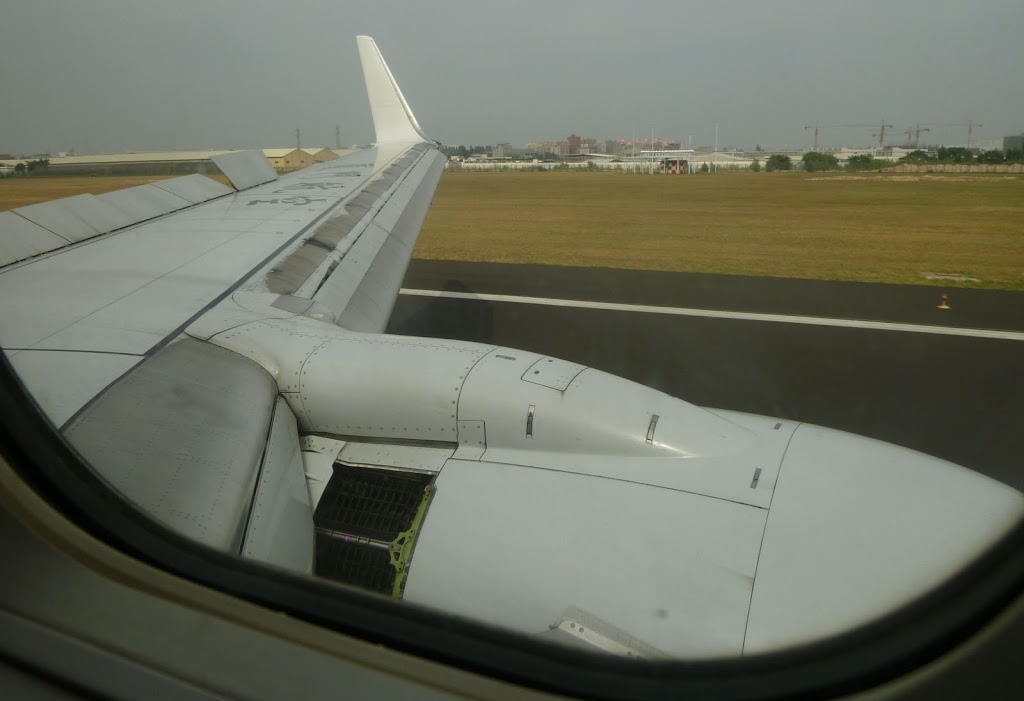 This was the terminal by day, with of course many Xiamen Airlines aircraft.

Reaching the gate alongside a Hainan Airlines aircraft. 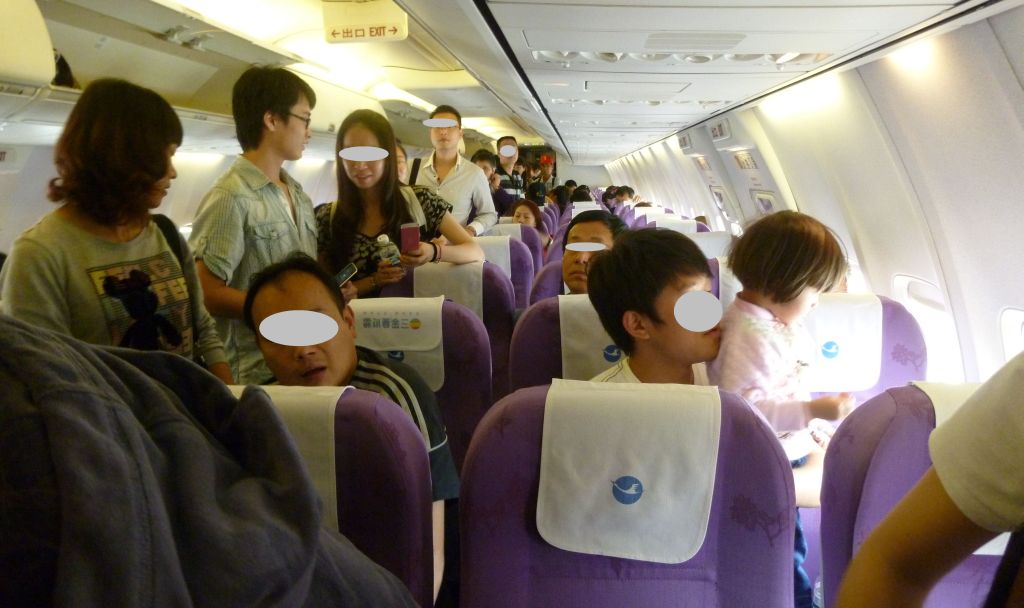 This young airport staff was distributing promotional maps of Xiamen. The FIDS overhead showed the diversity of the destinations and of the airlines serving them (Guangzhou, Shijiazhuang, Wuhan, Wuyishan, Kunming, Nanjing, respectively). 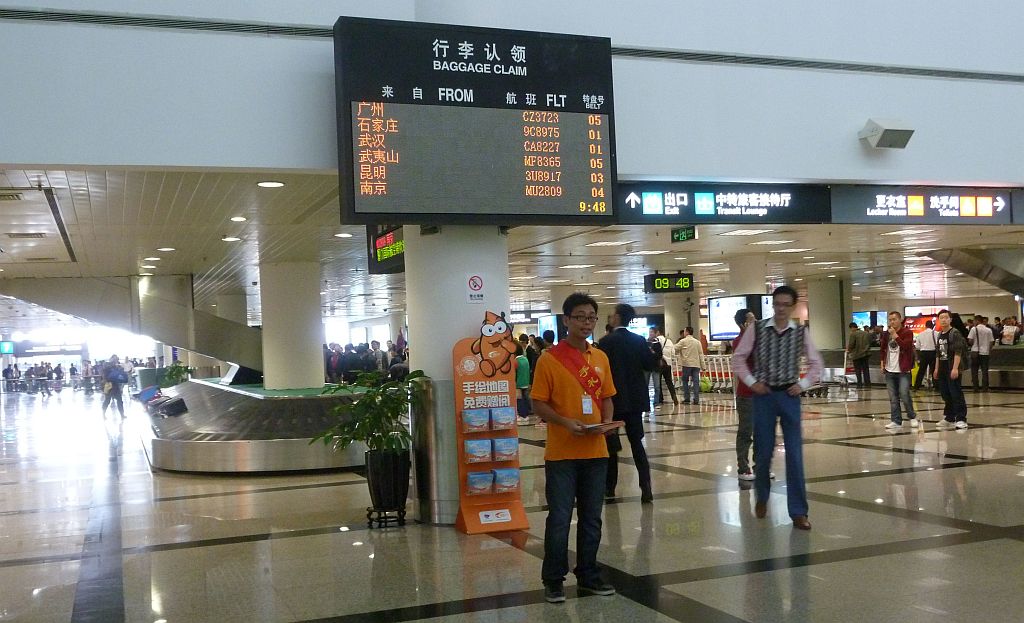 I won’t describe in detail the ferry crossing from Xiamen back to Kinmen: it was very similar to the reverse trip. Only that the boat was a lot more comfortable, with this IFE screens showing the national news (I had had already the boring speech of then President Hu Jintao on the radio in the taxi from the airport), and the counter for on board sales back left. On the other hand, there was no way I could take pictures outside: the windows to the front were opaque and that on the side completely covered with salt. I could only use a small tinted but reasonably clean window on a crew door in the rear, as passengers had no access to the open air during the crossing. The loading factor on Sunday morning was very low, around 10% 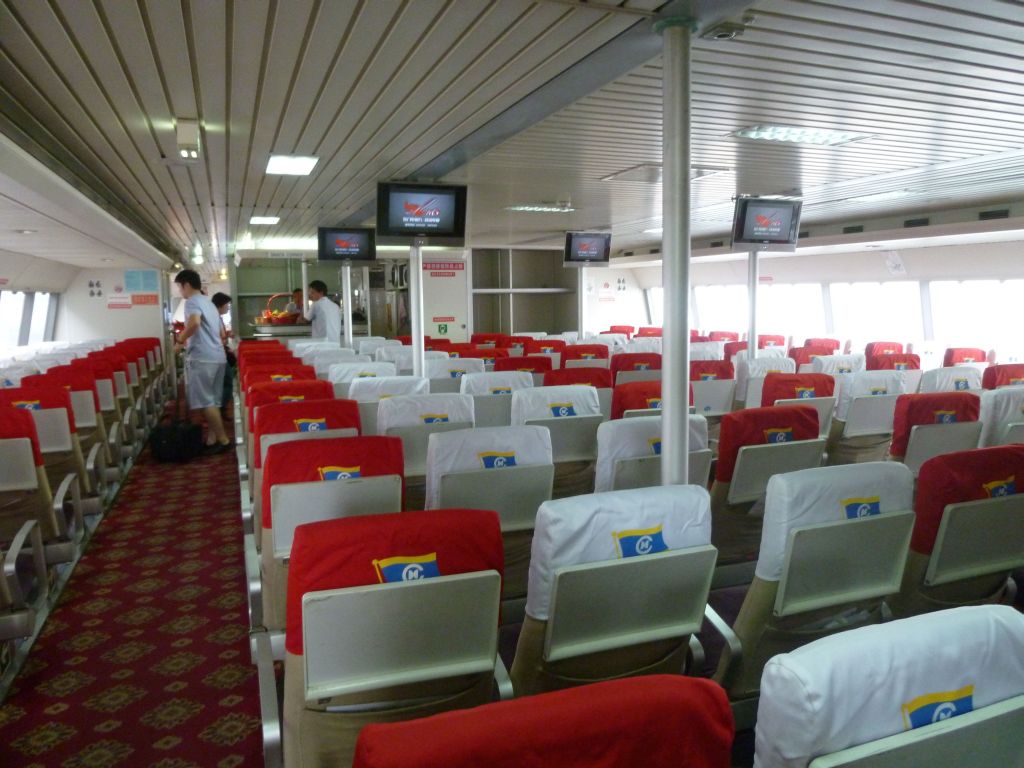 The arrival at the immigration in Kinmen could look like that of any airport if there weren’t this giant posters. Claiming 金門歡迎您 (Kinmen welcomes you, written vertically) with an assault rifle holding cartoon character was a rather heavy-handed message to the citizens of Mainland China (which suffered a crushing defeat in Guningtou 古寧頭 when they tried to invade Kinmen in 1949). Together with a logo (top left) of the one hundred years anniversary of the Republic of China (= Taiwan), the reminder to Mainland Chinese visitors was loud and clear : this is not your country, but ours. 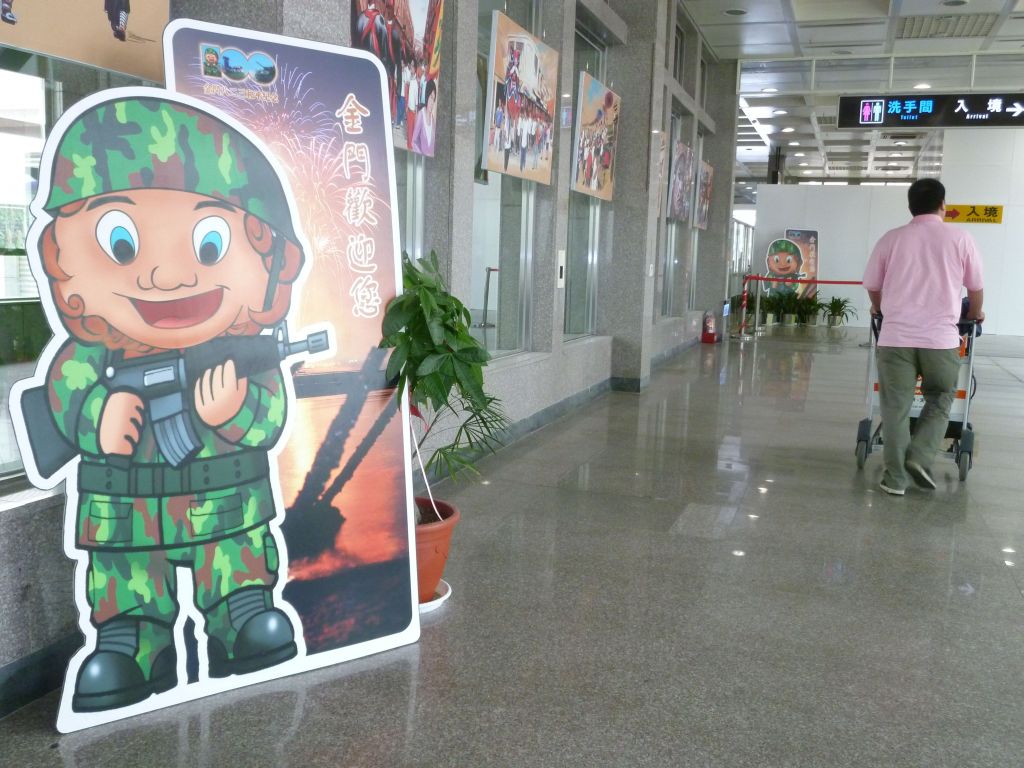 Why go to Wuyishan, besides the fun of an unusual entry into Mainland China ? This is the topic of the short ensuing bonus.

Bonus : Click here displayhide
How many readers knew before reading this series of Flight Reports that Wuyishan National Park is part of the natural sites in the Workd Heritage List drawan by Unesco ? Probably not many, and I had this impression too once there because I had the strong impression of being the only foreign visitors that day. Apart from Taiwanese, who are not quite considered as foreigners in Mainland China… well, it really depends on the circumstances.

One full day was somewhat short to visit Wuyishan National Park, but being alone and walking at a brisk pace, it was feasible, on the condition of being in could health, because "shan” 山 in Wuyishan means “mountain” (this character represents three mountain peaks). There were superb vistas to be reached on the condition of climbing a few stairs.

If you prefer the view from down below, there was the option of bamboo rafts. The Chinese are very safety-minded, and all tourists had to ware a life-jacket, justified by the fact that the water depth sometimes reached 80 cm, on the condition of looking for the right spot. It would be rather half of that on most of the way. Granted, you can drown in 40 cm of water, but I don’t know if a life jacket would be that much help in that case. 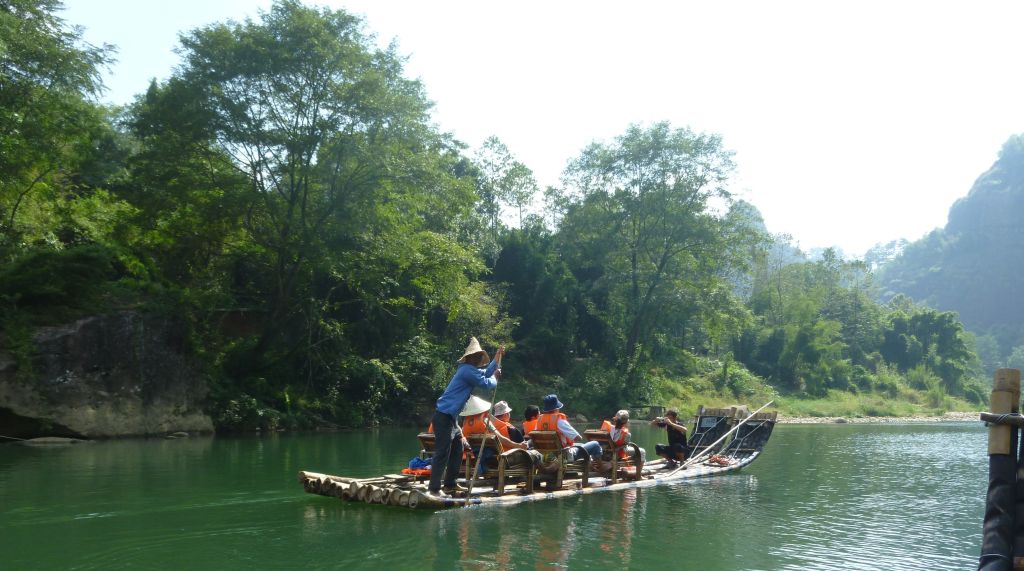 Bad luck for Xiamen’s comfort rating which assigned me one of the worst seats in the aircraft, from my point of view. The rest was decent, for the same price as on the way in.