#57 out of 72 Airlines A minimum of 10 flight-reports within the past two years is required to appear in the rankings. 40 reviews

By marathon GOLD 838
Published on 21st February 2018
This was the last flight in a week-end trip to Mainland China :

This FR begins at the arrival at Kinmen airport, after a quarter of an hour taxi ride from the harbor. There were also buses managed by the airlines too, certainly cheaper than the 300 TWD (7.50 EUR then) taxi fare, but slower and it was unclear how they operated. 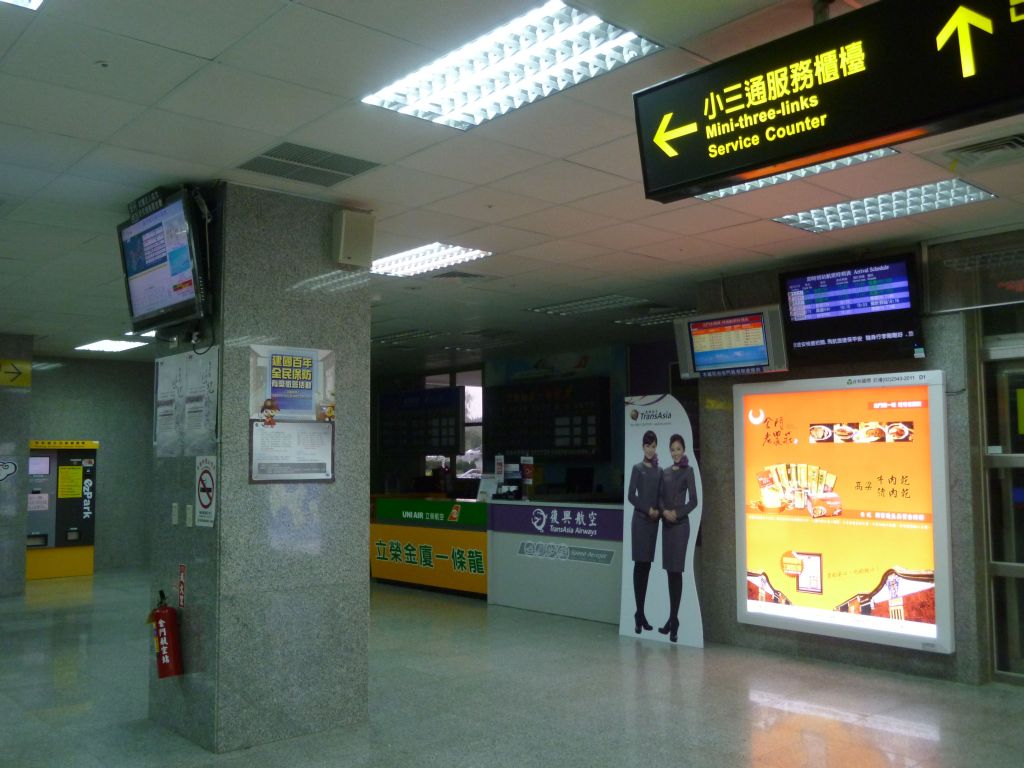 It was barely 1pm, which gave me ample time to rent a scooter for half a day. There were probably few foreigners among her customers, because the employee at the car and scooter rental agency recognized me; she offered me a bag of cookies when I returned, like you do to a regular customer. Or maybe it was to excuse herself for not refraining a hearty laugh when I had used a wrong word in Chinese when telling her the time of my flight (the mistake was indeed very funny). The Taiwanese are really friendly people. Plane spotting was unusual that day because I went to the 823 Museum, i.e. the museum to the glory of the Taiwanese forces who held against the large scale Chinese onslaught on August 23, 1958.

F-86 Sabre, the spearhead of the Taiwanese air force at the time 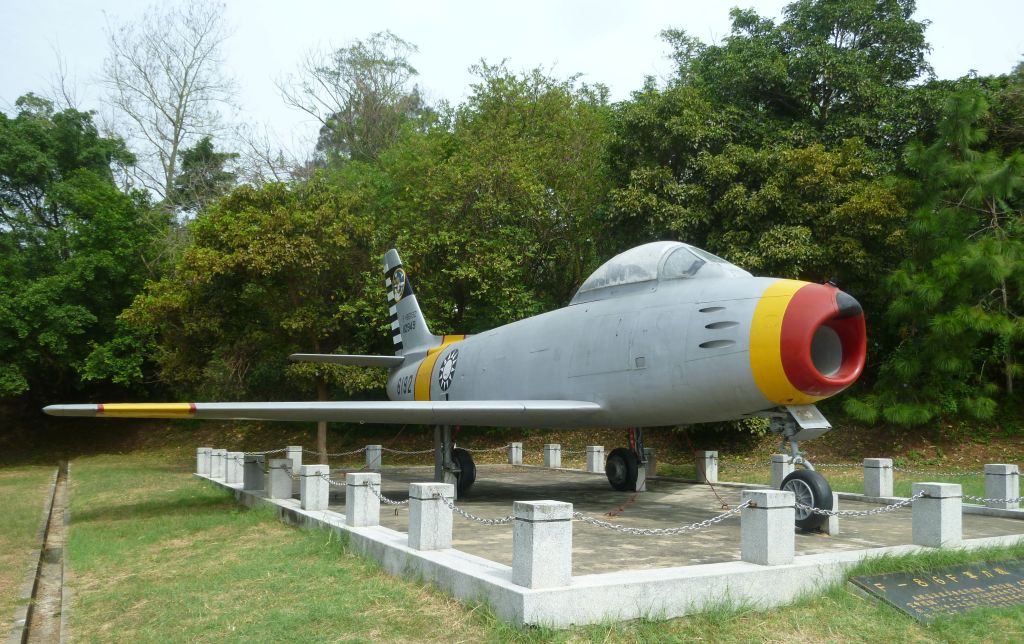 The hostilities tapered off after several months. I wonder how the Taiwanese manage to count accurately the 474,910 shells fired by the Chinese who did not spare any space in the whole Kinmen archipelago (with special attention to Little Kinmen Island), and I admired the administrative precision of the total of 74,889 shells fired towards Mainland China.

The shells fired by the Reds are in red, of course.

Shelling was halved afterwards. Literally so, because for twenty years, the Chinese shelled Kinmen on odd days only, until the establishment of diplomatic relationships between the US and China. You believe I’m kidding ? Read this: 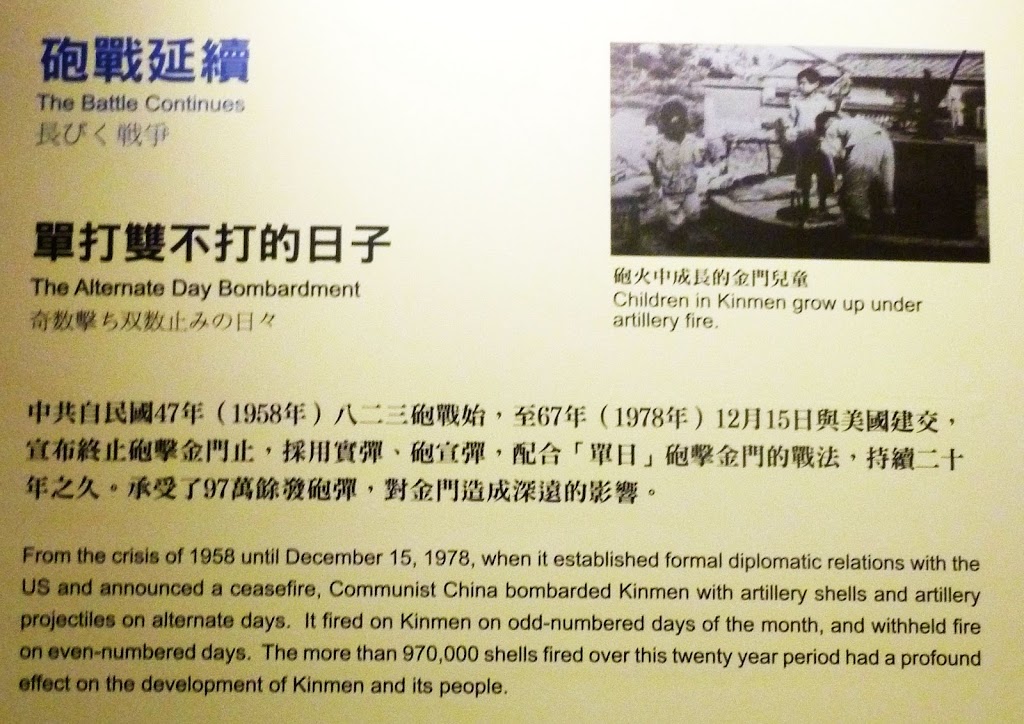 I’ll stop here my history lesson whose purpose was to explain the military look of the immigration at Kinmen’s harbor.

I was therefore back at the airport where the bag of cookies of this cute scooter rental agency staff was all the more welcome that I had not eaten anything since breakfast in Wuyishan. A 100% pure Chinese breakfast, the kind which takes several years of gradual training.

Plane spotting was limited because massive reflections on the windows prevented me from offering you a picture of a Mandarin Airlines E190. I could at least take this picture of a Transasia Airlines ATR72.

I was not asked to remove my laptop from my bag at the security check. Calls for the flights in Madarin were continuous in the boarding room downstairs, with a rather jerky synthetic voice which made them easier to understand. If you did not understand Mandarin, then you were in trouble, because the two FIDS were in awkward locations (I had trouble finding this one) and the useful information (wait, delay, boarding) were also in Chinese only. This should not deter foreigners from visiting Kinmen: the local staff are as helpful as any Taiwanese staff anywhere. 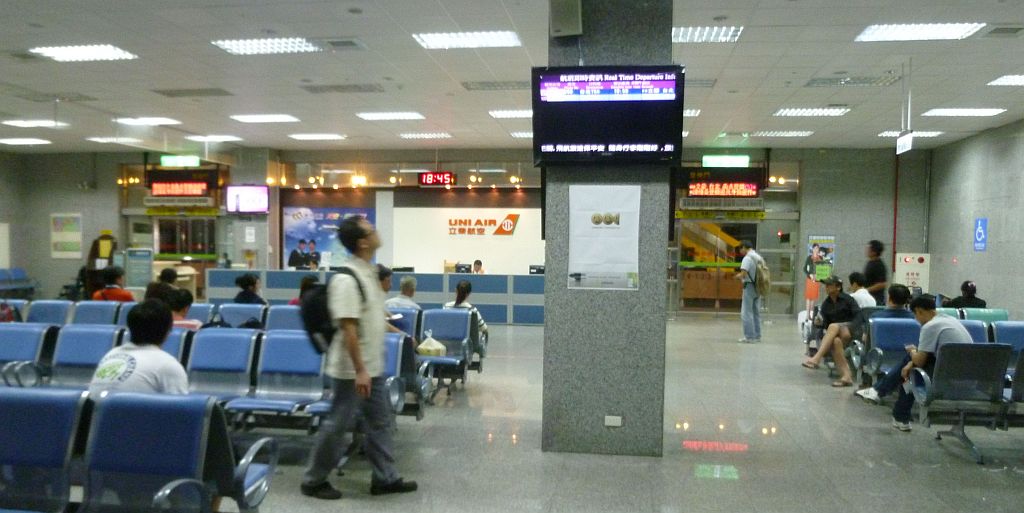 The Mandarin Airlines E-190 that I could not photograph from the upper level before nightfall. 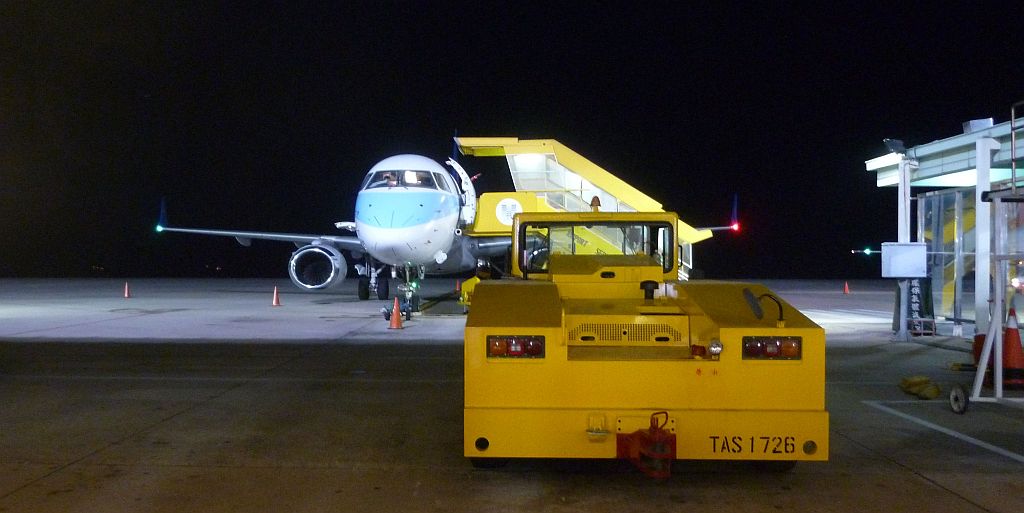 And discovery of the Uni-Air MD-90, which was a novelty for me and a reason for choosing this flight.

Note (it does not show very clearly in the dark) that some passengers boarded via the rear stairs. They had been directed at the BP checkpoint, located at the far end of a path under a roof on the apron. Much to my regret, I never got a chance to board the Taiwanese MDs this way when I was there, but you can’t have the rear stairs and a seat towards the front, far away from the engines’ noise.

The Fa welcomed me in English, and shifted with a smile to Chinese when I replied in his language. One bonus point for his linguistic courtesy.
There were three rows of business class in 2+2 layout 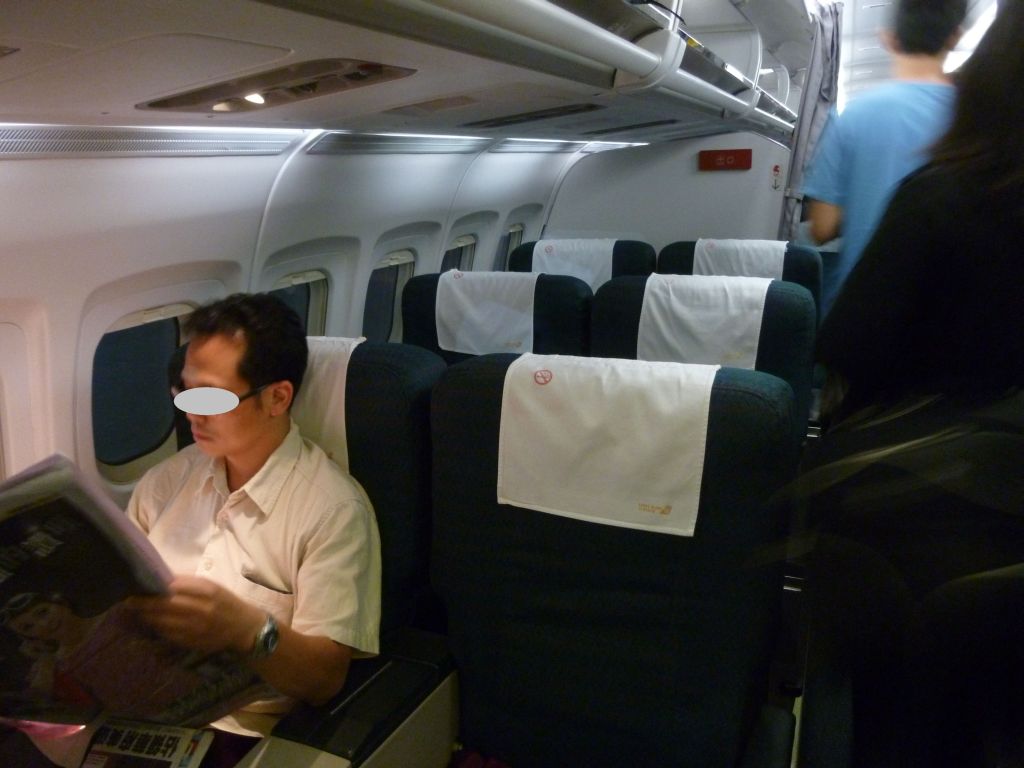 And the rest was in 2+3 layout, with a reasonable comfort in both seat width and pitch 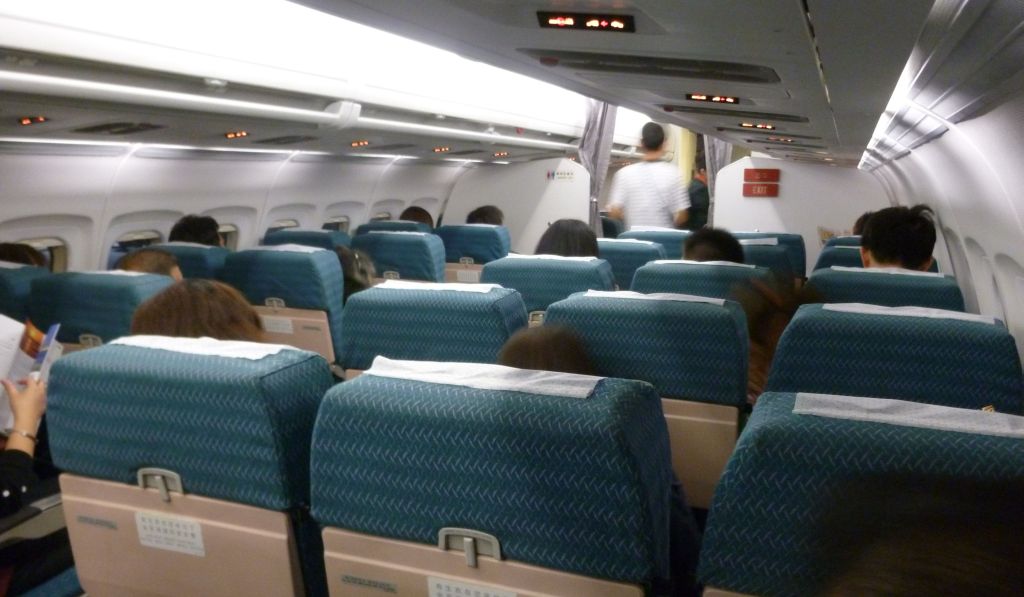 It was a night flight and I was looking out to the sea anyway, so I do not have any picture. This MD-90 a lot noisier than the FAT MD-83 that I had had on my preceding flight to Kinmen, even though I was seated further to the front of the aircraft.

You didn’t have any food on domestic flight, and it was coffee with milk, but it was delicious (yes, I can like a good coffee with milk !) which jacked up Uni-Air’s grade on this factor. 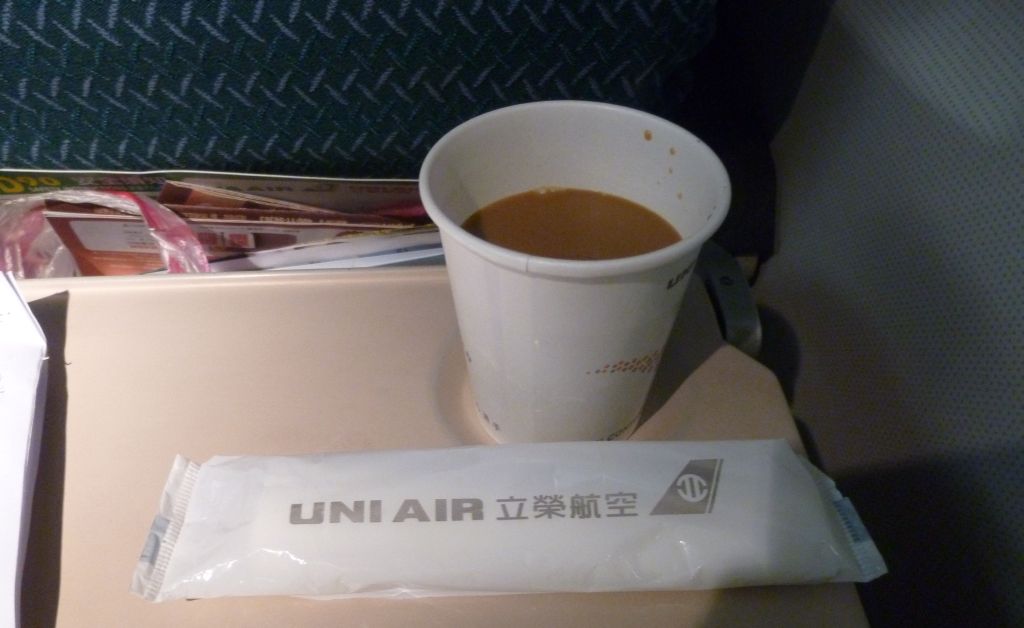 The reason I asked for a window seat on the right was that this was the side with such a beautiful with of taipei at night. OK, my compact camera was not adapted, but I nevertheless post two pictures taken while crossing the Danshui River.

Arrival at the gate – note the illuminated Neihu Ferris wheel in the background. 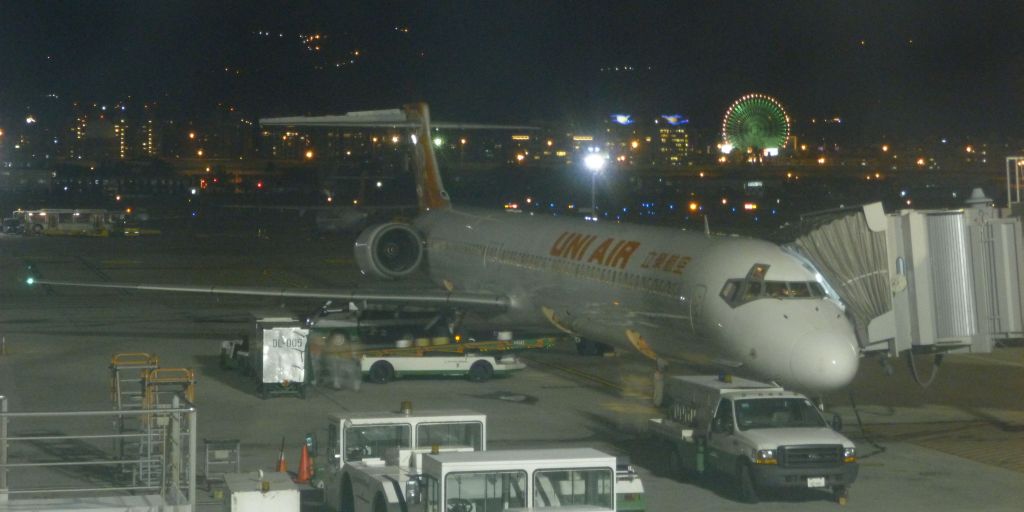 I found a well known friend : the Mandarin Airlines E-190 with a special livery.

Plane spotting was not completely over because it was Sunday evening, but it was a three day week-end because Monday was off. The reason I had shifted my week-end slightly, from Friday noon to Sunday night was that all flights were full otherwise, and the reason I went to Mainland China was that all hotels were full too in Taiwan.

In Taiwan, but not in Mainland China, because October 10th is Taiwan’s National Day, celebrating the founding of the Republic of China by Sun Yat-Sen (in Nanjing, but it does not matter, since China is Taiwan ;). That year was the 100th anniversary and I was not going to miss the military show in a country where the population is well aware of a continuous and close military threat. 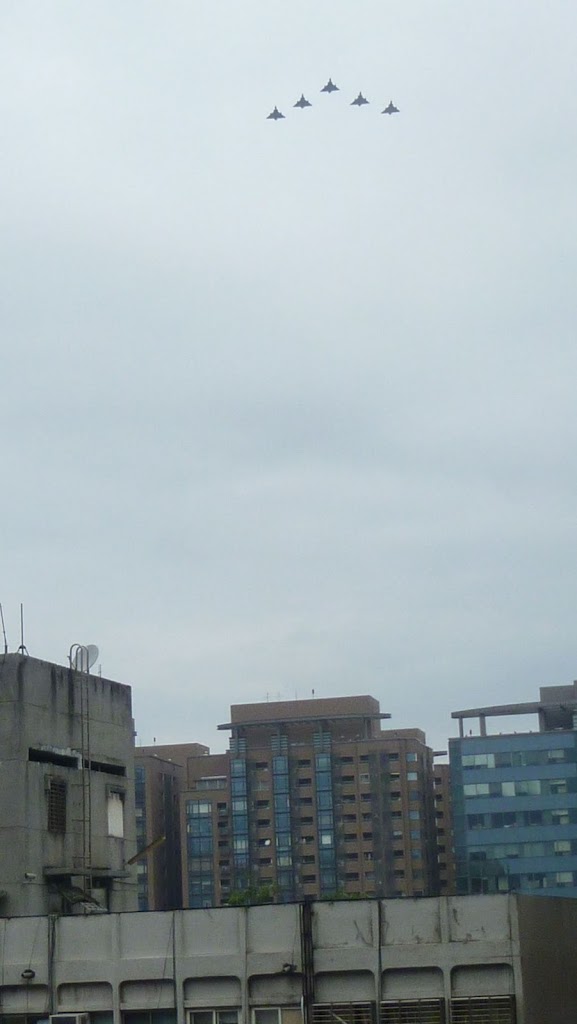 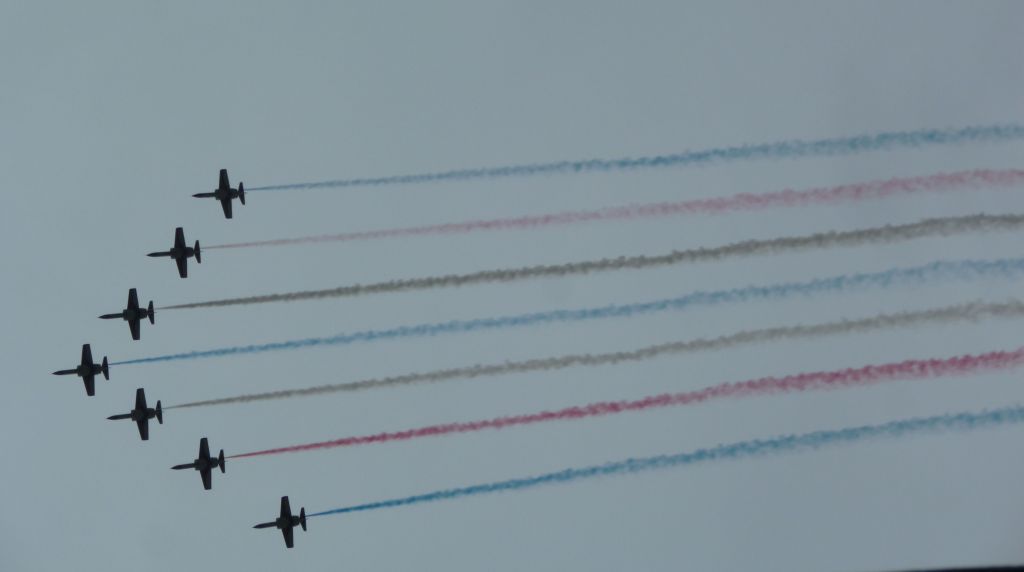 I was not going to miss the gigantic fireworks shot at night from the shore of the Danshui River. The Chinese invented fireworks in the 7th century and they descendants remain masters of this art. 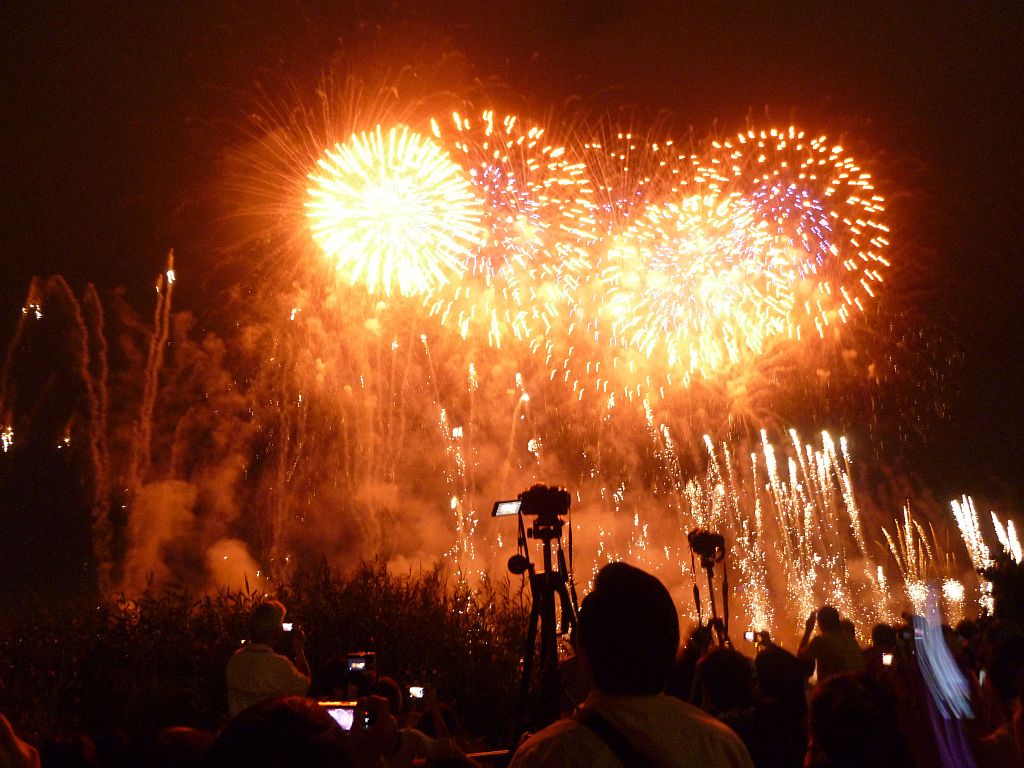 The most impressive scene was possibly after the fireworks : the Danshui River banks constitute a floodable area which are bordered by five meter high levees, with few openings which can be sealed by waterproof gates – there is one opened here on the right. There are express lanes on top of this levee. It took me fifty minutes to reach this gate in this crowd which was unbelievably disciplined: when people are stopped, nobody touched his neighbor and there would be only spurious light contacts each we would make a few steps forward.

Grading 6.5 a simple milk coffee may seem generous, even if it was good, but this was a short and cheap domestic flight. There was little difference between Taiwan’s domestic airlines, then and probably now too, in terms of fare, flexibility and services.

The contributors of Flight-Report published 11 reviews of 5 airlines on the route Kinmen (KNH) → Taipei City (TSA).

The airline with the best average rating is EVA Air with 8.1/10.