So this is a part 1 of my 2017 trip to China (If you were on airliners.net you may have seen nearly the same exact report)

So in 2014 I read that the more unknown XiamenAir (MF) had just received some Boeing 787-8 aircraft, and maybe hoping that they would start US operations, which eventually happened, as in September 2016 they began flying to their first US destination, Seattle (SEA) from Xiamen (XMN) via Shenzhen (SZX). In October of that year my parents spotted a $600 fare in July and I had just told them about the airline too, them dismissing the fact about transferring in XMN to our family's Nanning (NNG) which they worried of the few non-stops they offer from there. Instead this time they found that they just flew SZX which was pretty darn close to NNG. We then last minute booked on Shenzhen Airlines (ZH), which ultimately was so short I may not have been able to report on!

So basically, I guess Xiamen saves the day with my first Dreamliner flight and being a cheap deal!

Anyway I created a video report on my channel, which hopefully helps aid with my actual experience reported here.

I arrived at Seattle just after 9am from BOI onboard DL's new E-175 service (my first time on that plane :) ) which I may post about?

Unfortunately DL wouldn't transfer our bags to MF despite being Skyteam partners (which even the attendant at BOI didn't even know the airline at all), but that was likely ultimately due to them being on separate itineraries

We did recheck in ultimately to go through security again, which wasn't really as bad in SEA.

Our family of course got some things to eat, and ultimately I chose to have a burger, which I wouldn't be getting in China or anytime soon. I was bored and found out our flight departed oddly at A12, away from the usual international terminal, but MF is a SkyTeam member, who can also use DL gates. Oddly enough, A12 was the exact gate the flight on DL's A330-200 two years prior, which I reported the least comfortable seat I've ever had on a flight. 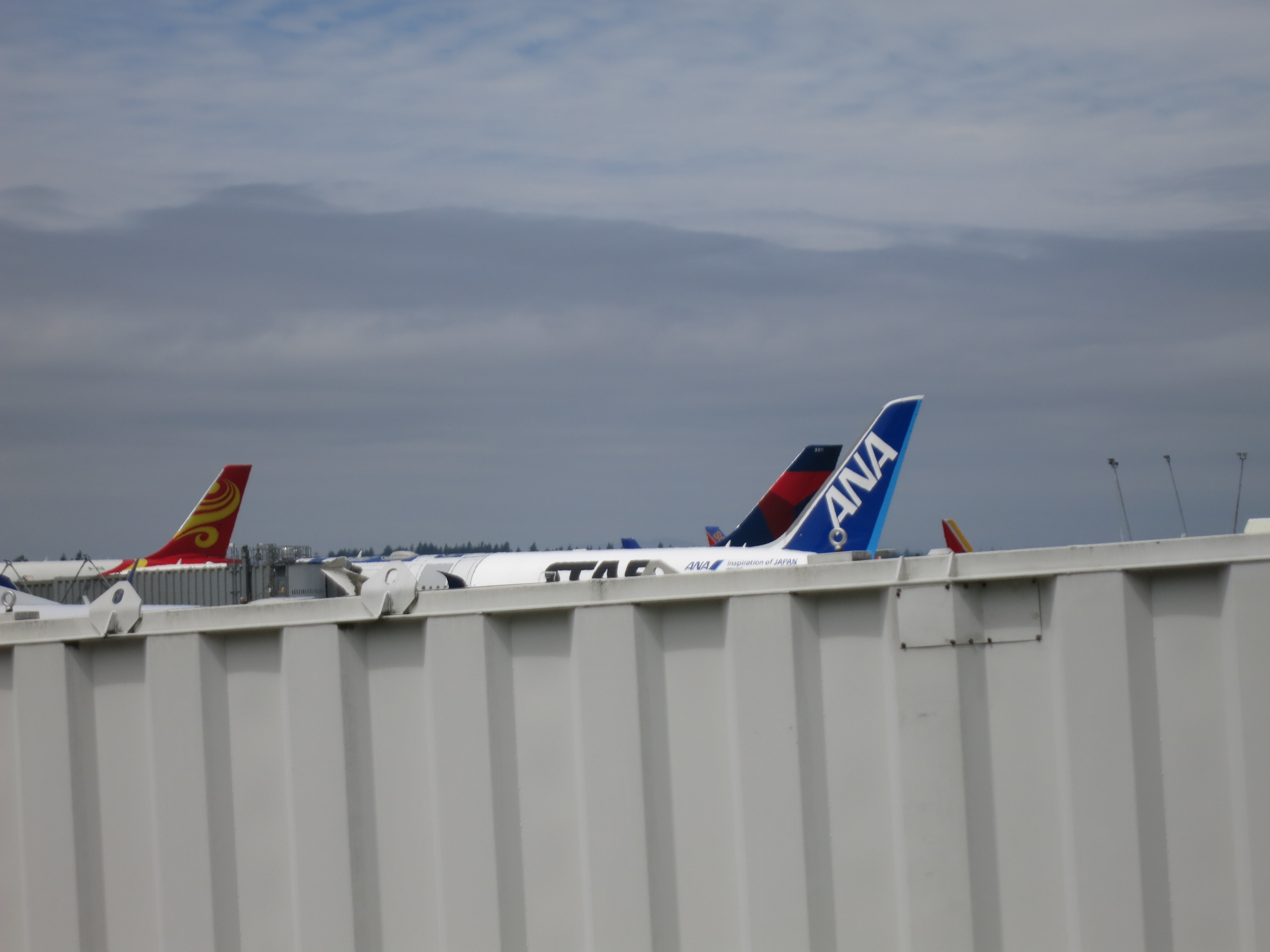 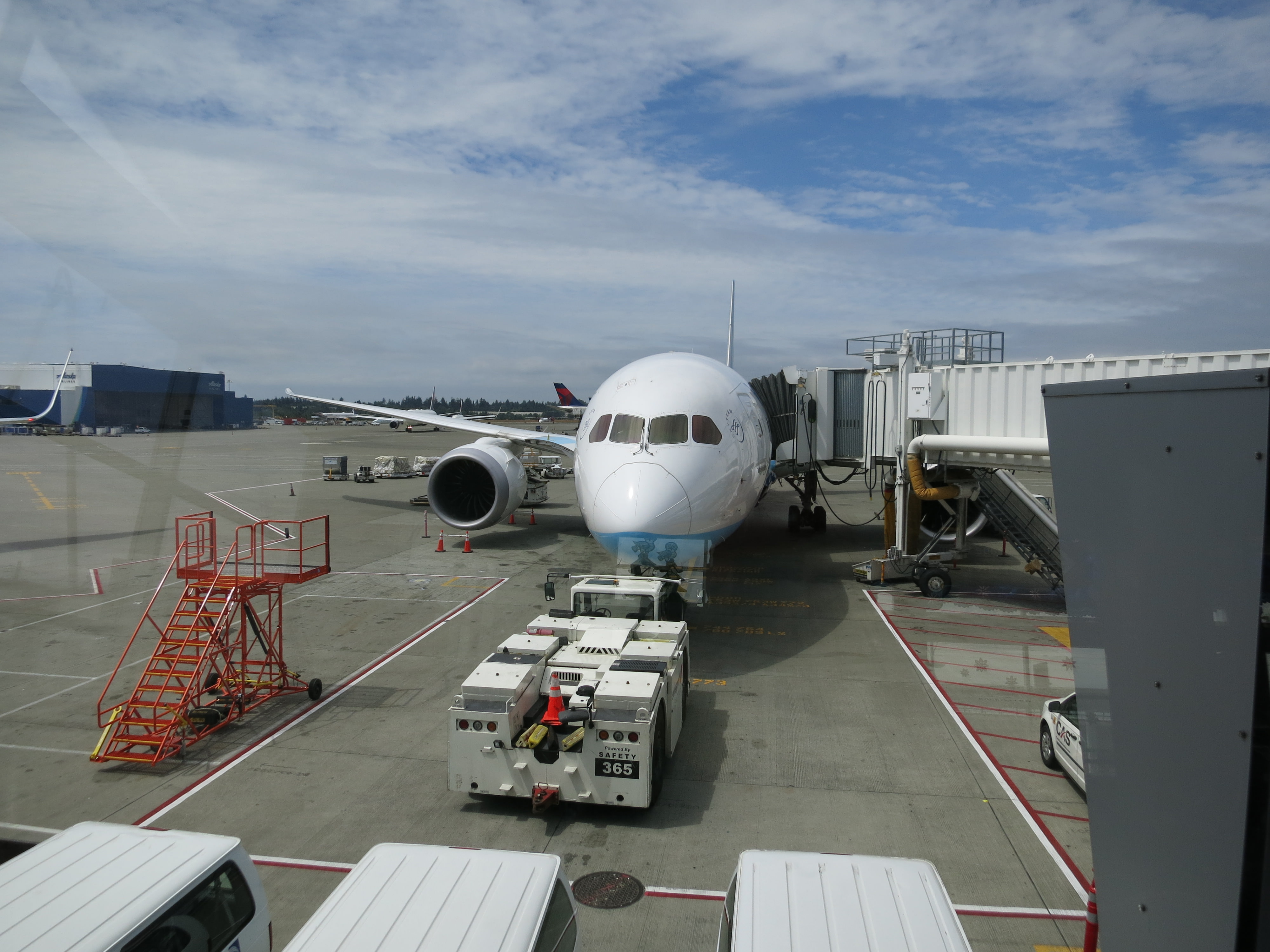 Our bird, B-2763 after being towed from the S Satellite for Customs 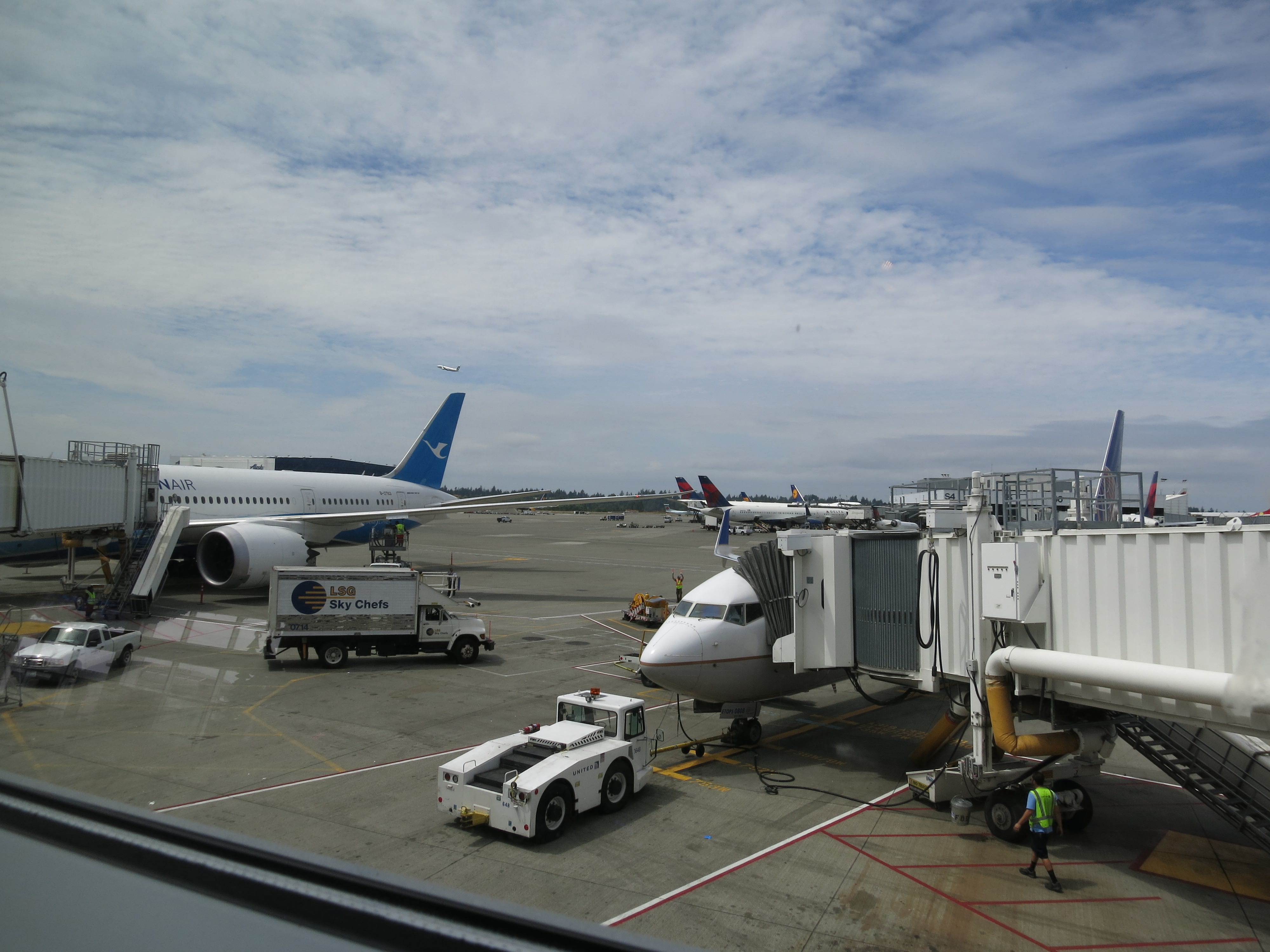 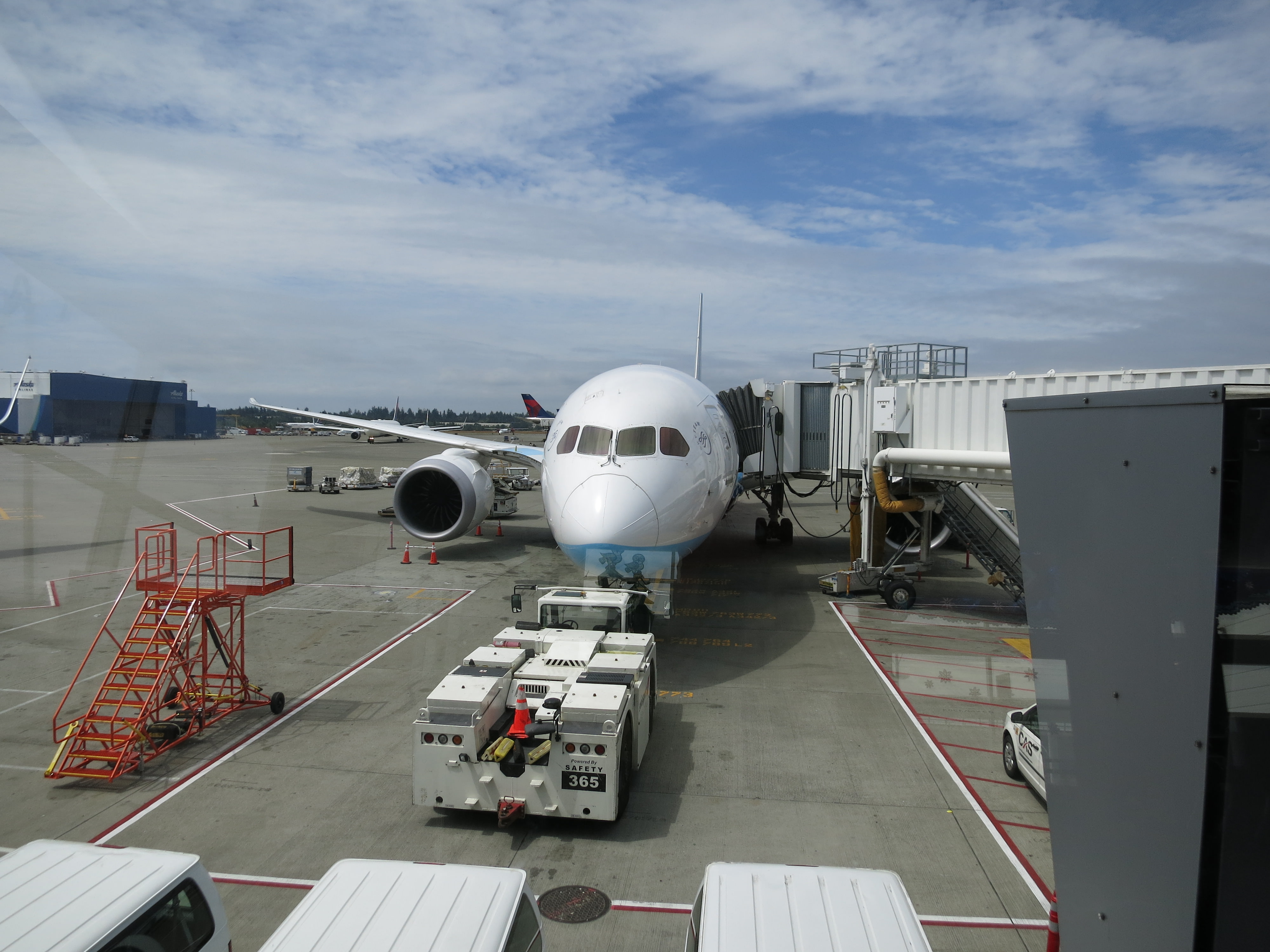 Boarding began on time, with first/business boarding first, followed by rear Economy class, then the forward section, I would be stuck at seat 43E, part of the foward section, and the middle middle, what I would call the worst seat on the flight (being farthest from the window ;/)

On board I was welcome by the wonderful attendants and one at my seat.

The config of the flight was of course the standard 3-3-3 with 17 inch width and 32-33 inches of pitch. Wasn't really as horrible as I'm very thin and average sized. 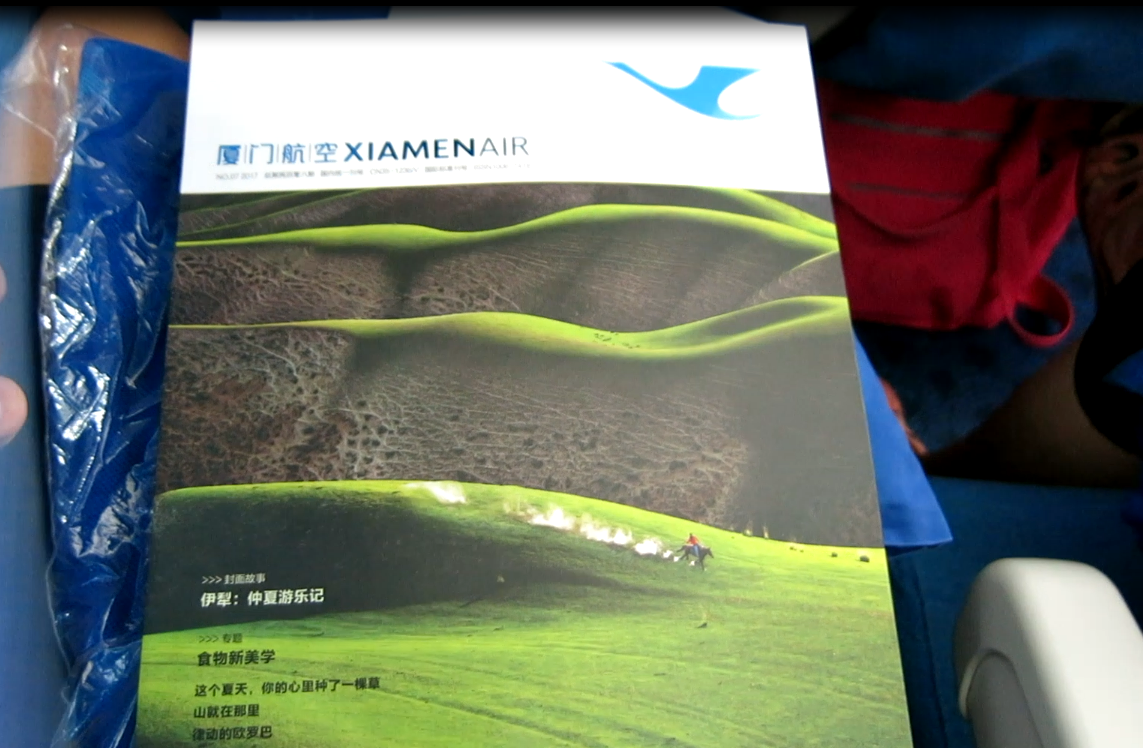 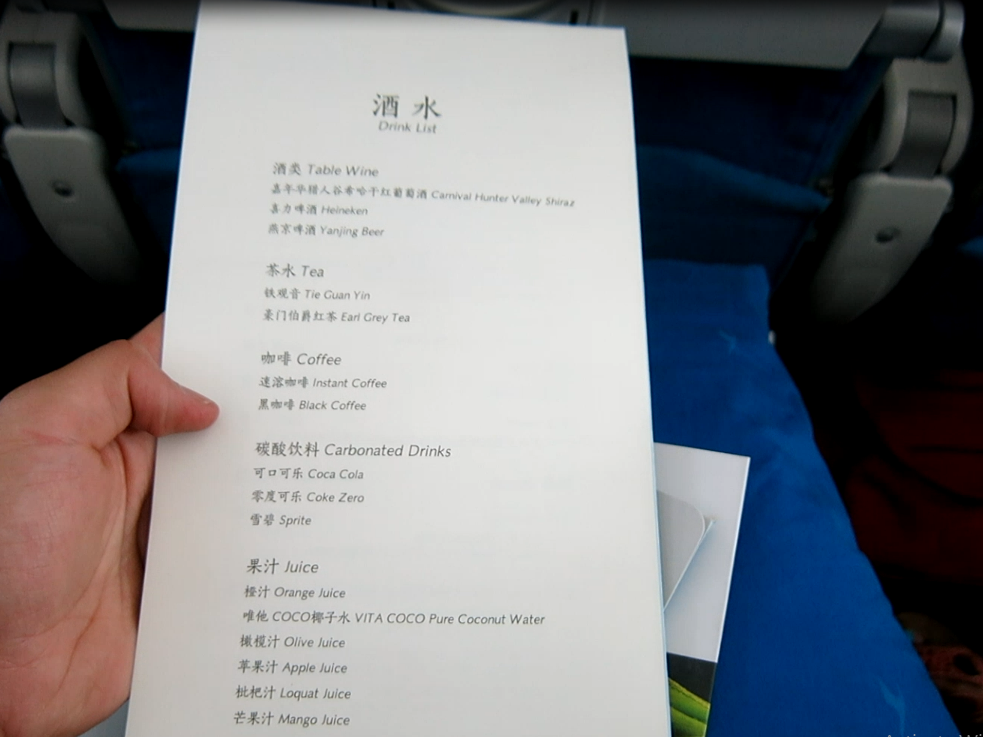 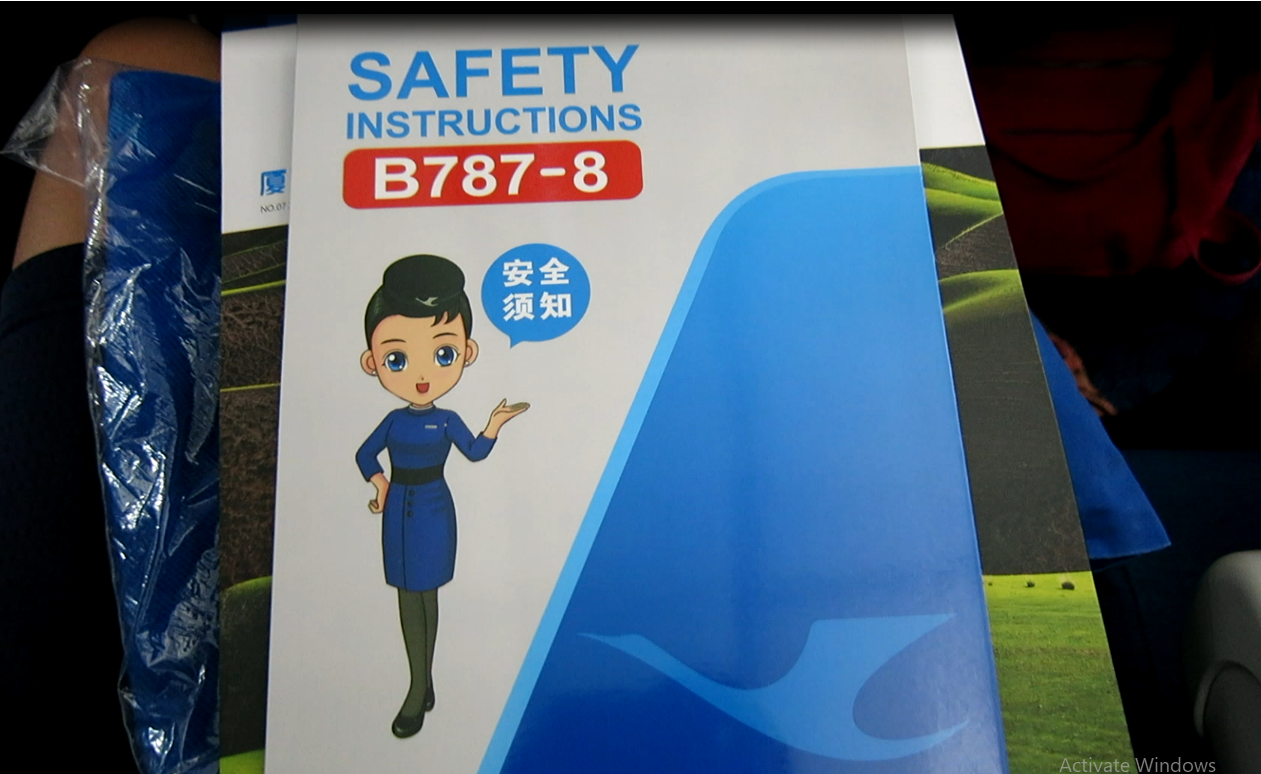 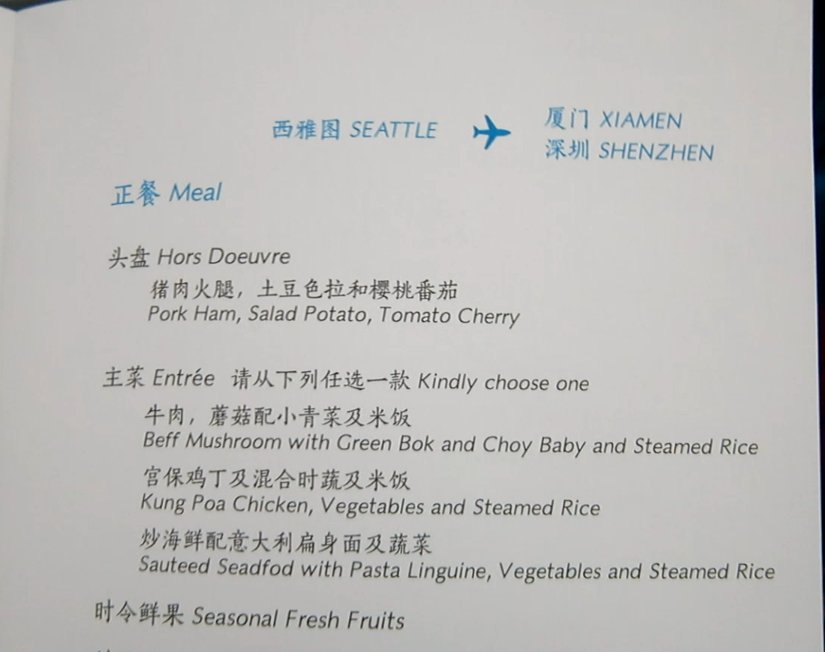 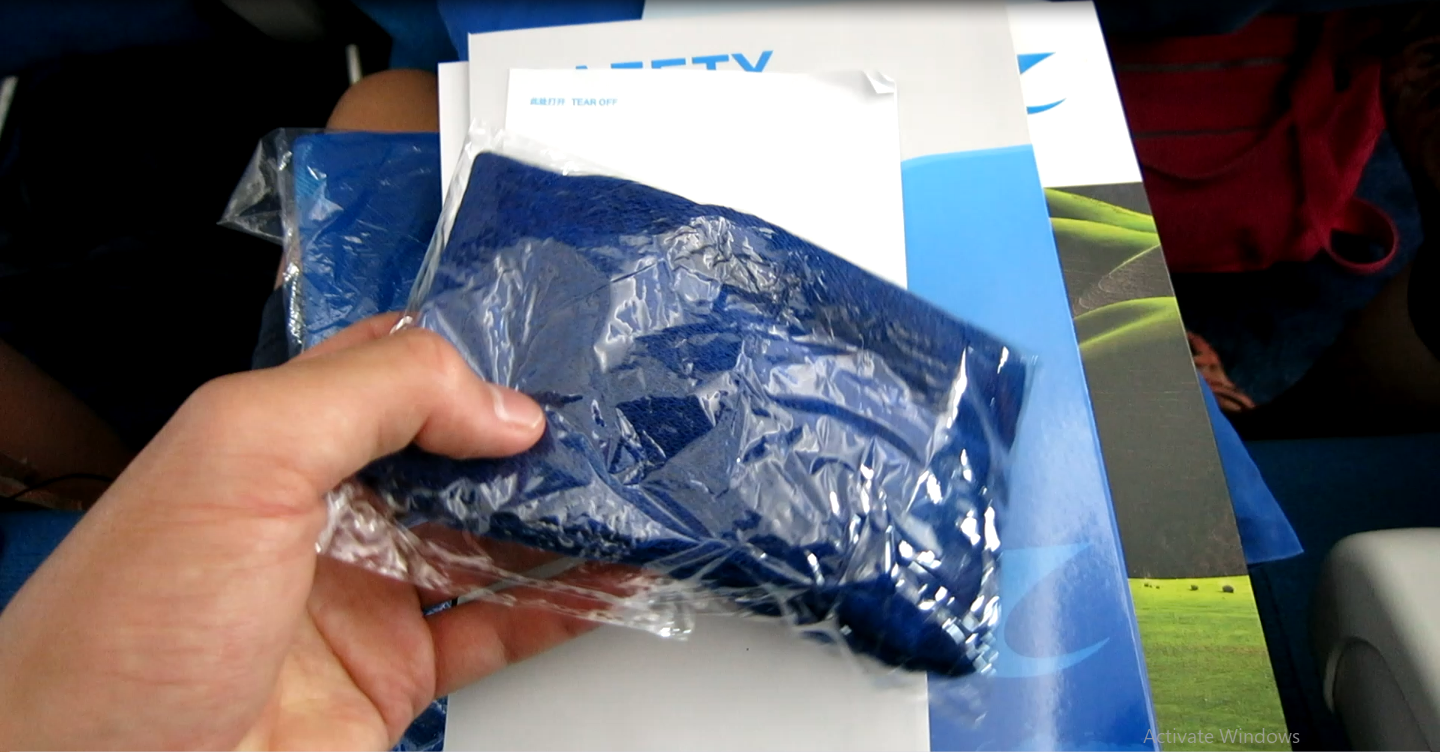 No amenity kit, just a pair of blue socks 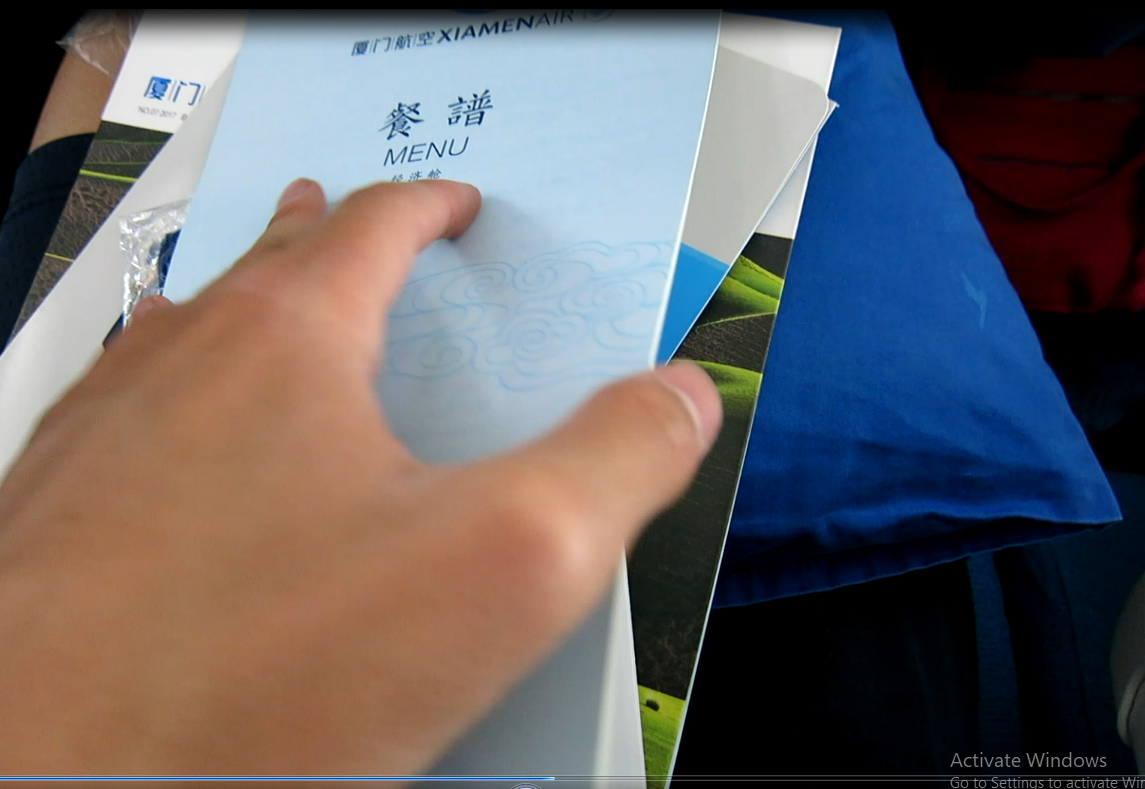 The safety demonstration was aired and the plane was off and running very shortly.

There was a long taxi until we ultimately took off at around 13:55, en route to Shenzhen in 12 hours and 28 minutes

About an hour in a drink and meal service began, with a choice between beef or kung pao chicken with rice, or seafood noodles. I chose the latter and my mother chose the first choice of beef. 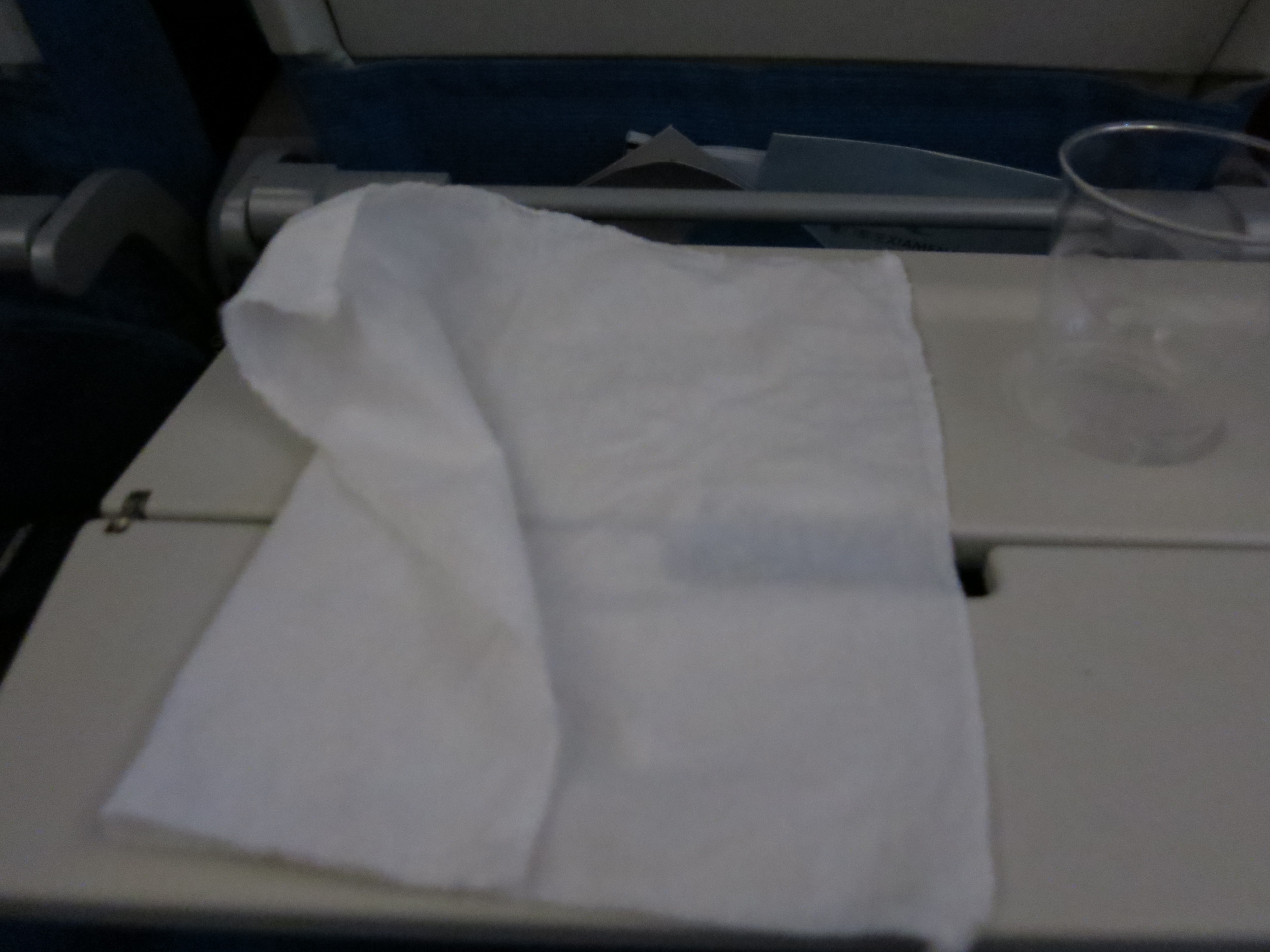 I could say it possibly shocked me as the best economy food I've probably ever had. 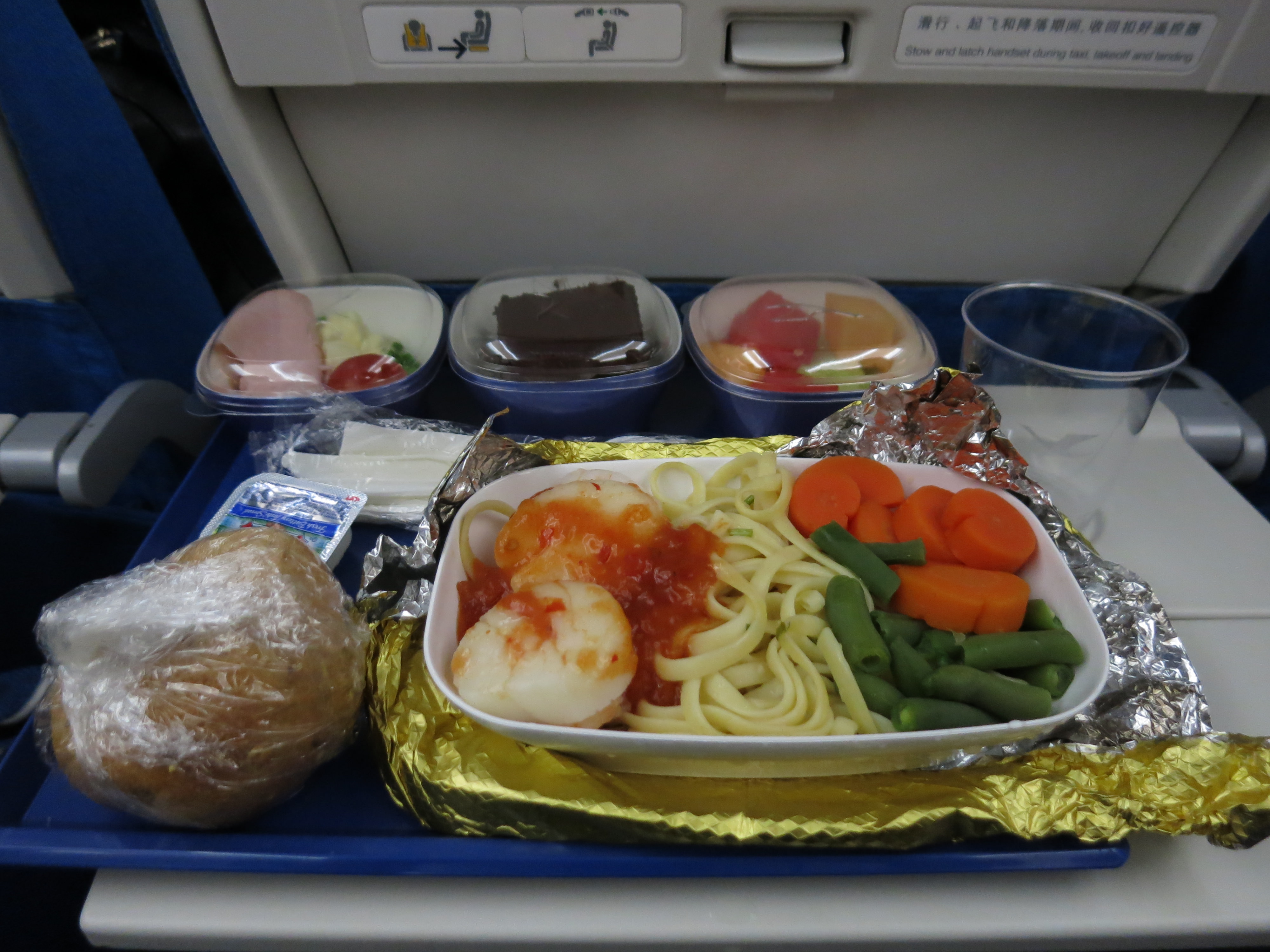 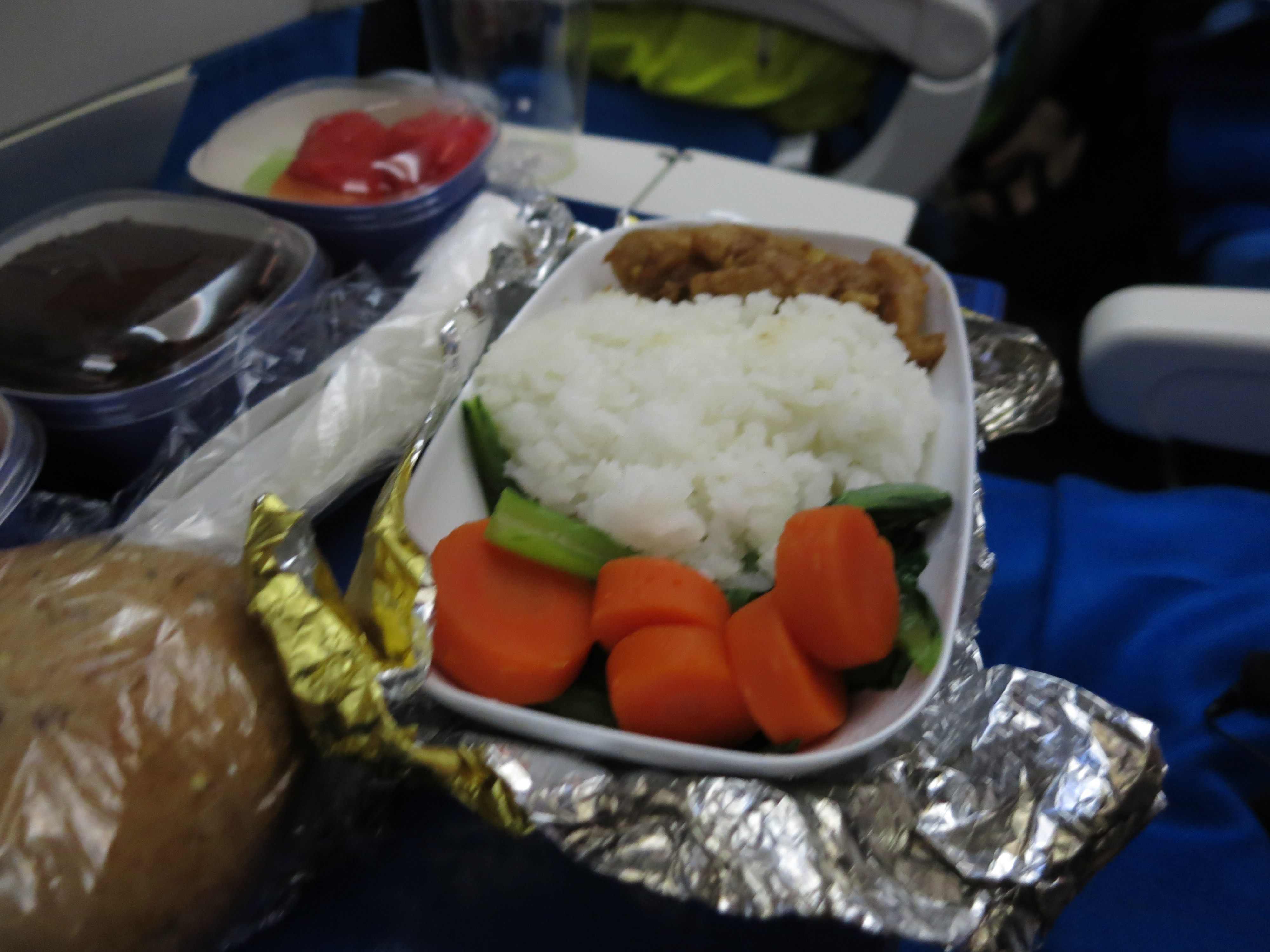 During the meal the FAs then distributed nuts and dried fruits, warning smaller children of choking. 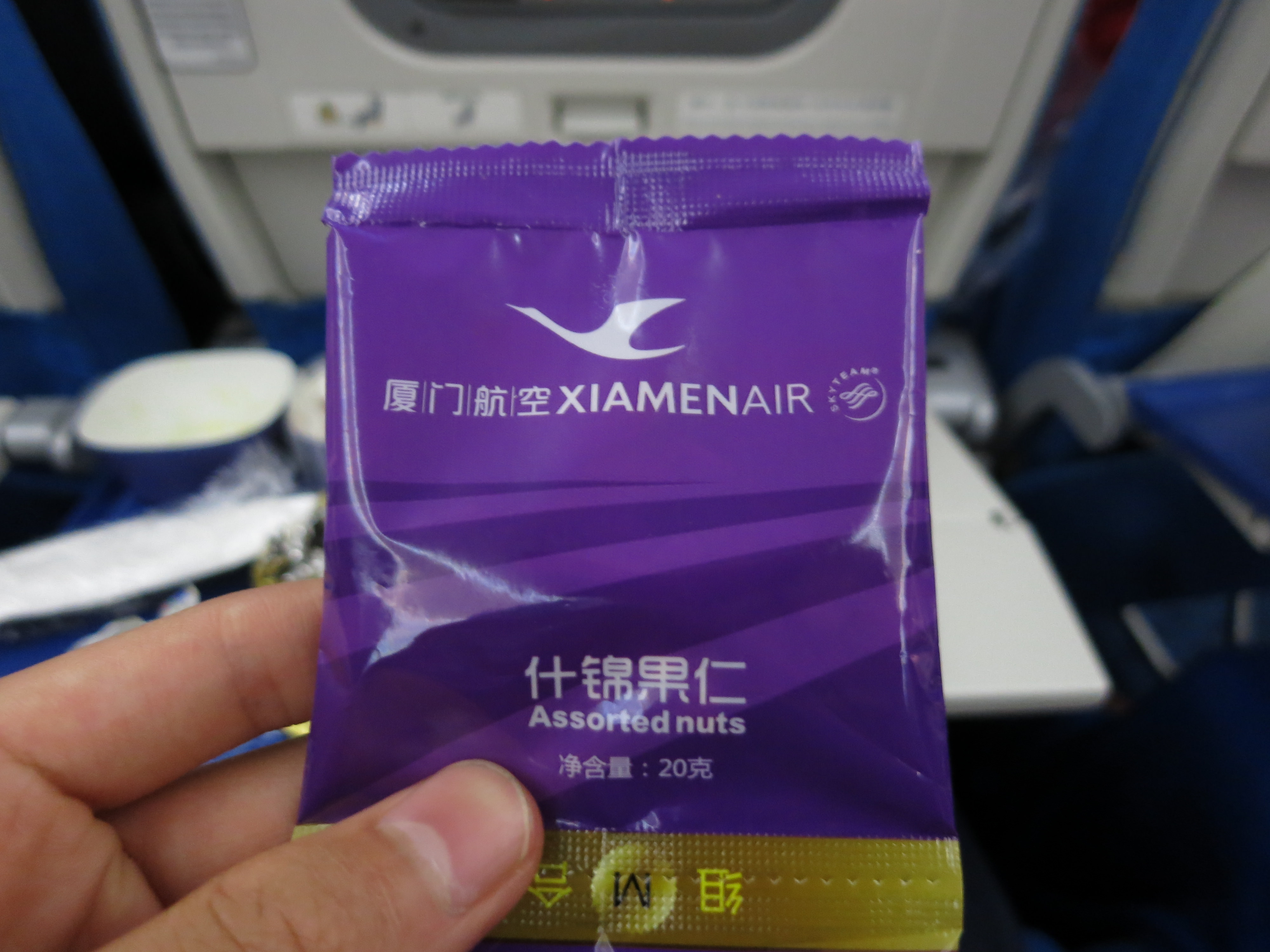 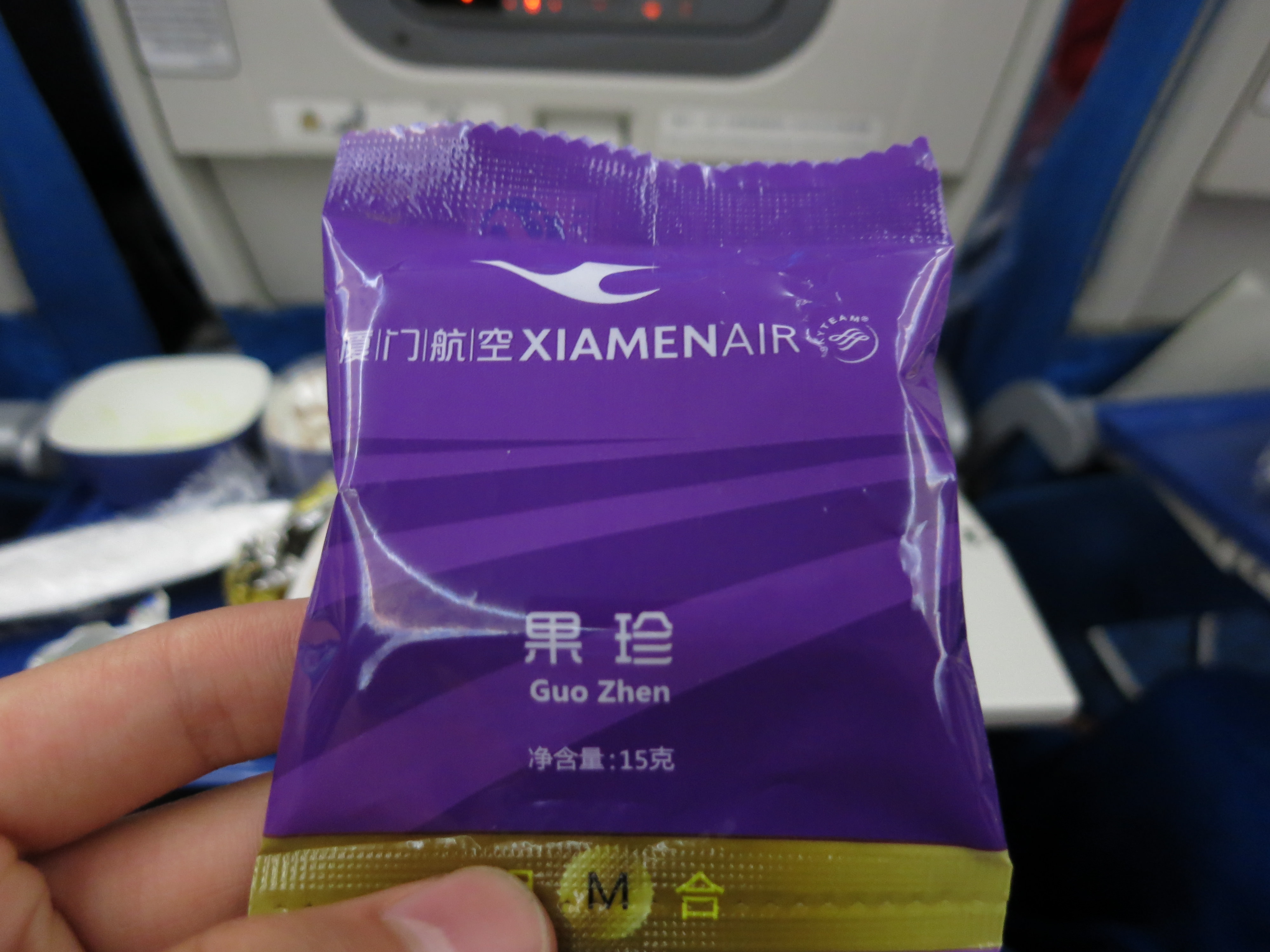 Afterwards I relaxed by napping and the IFE (which was OK in terms of content and sort of broke down in front of me, which needed to be restarted) 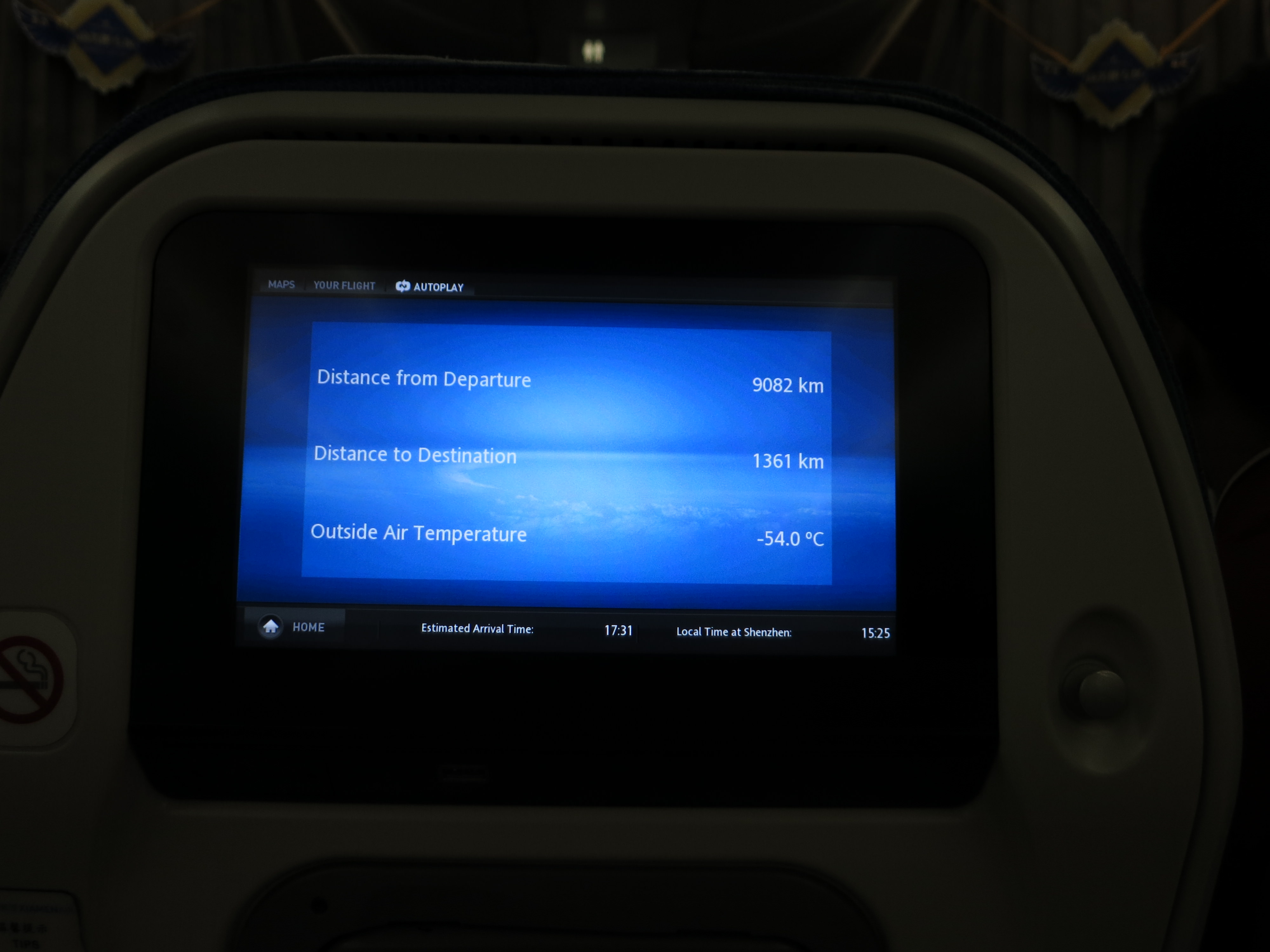 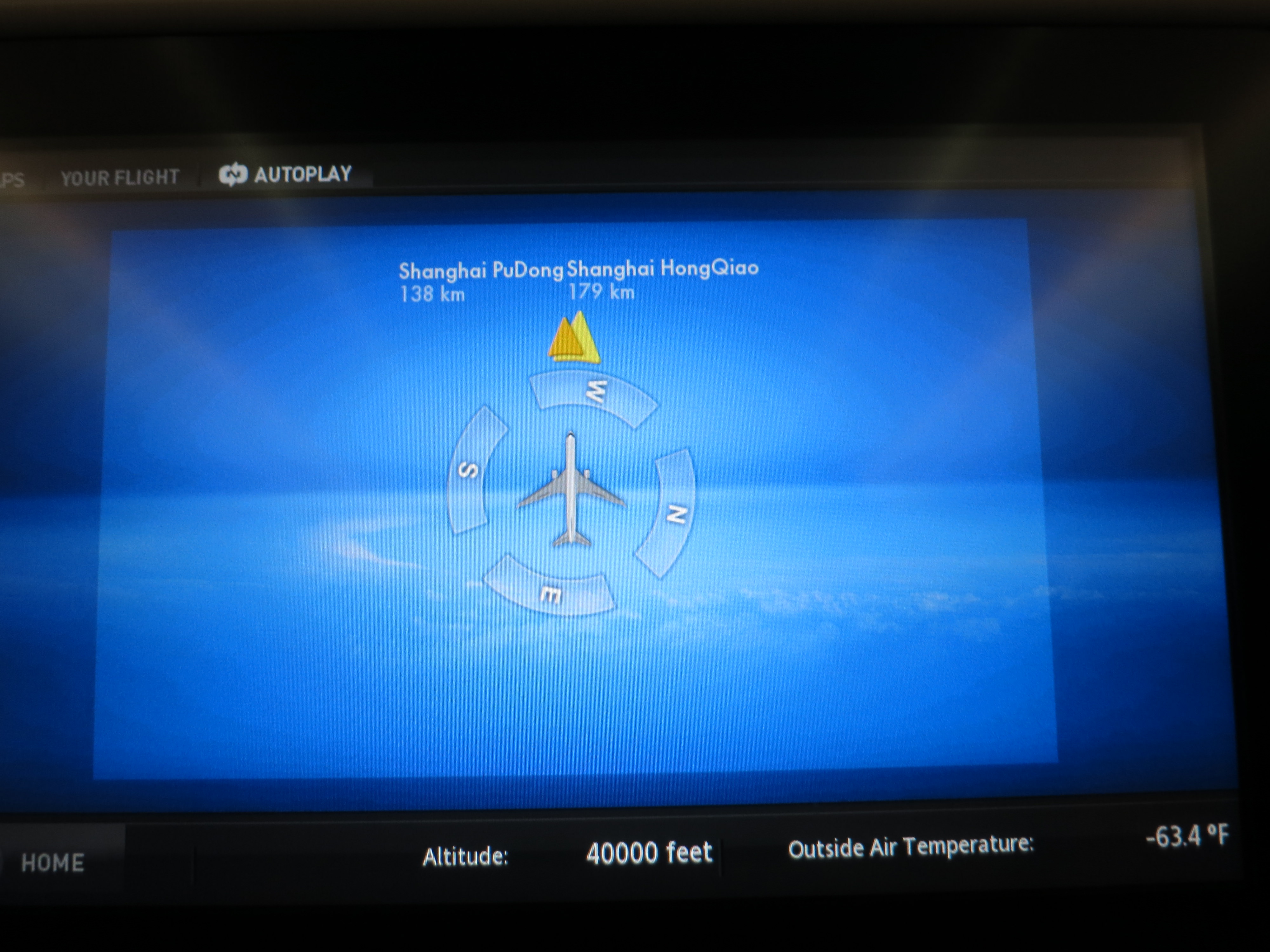 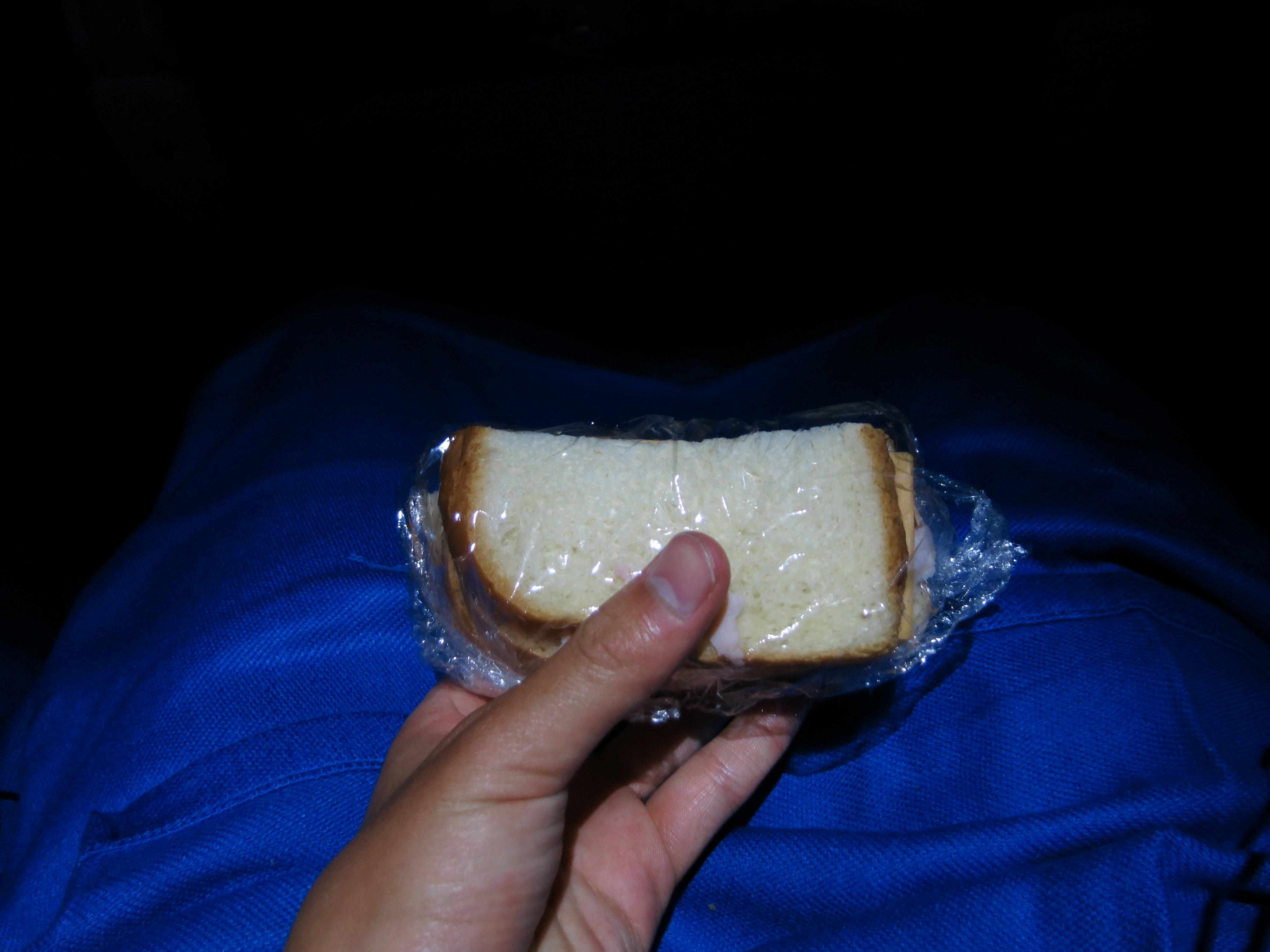 About 2 hours away they served a dinner service with a choice of cajun chicken pasta or pork with rice. I chose the latter 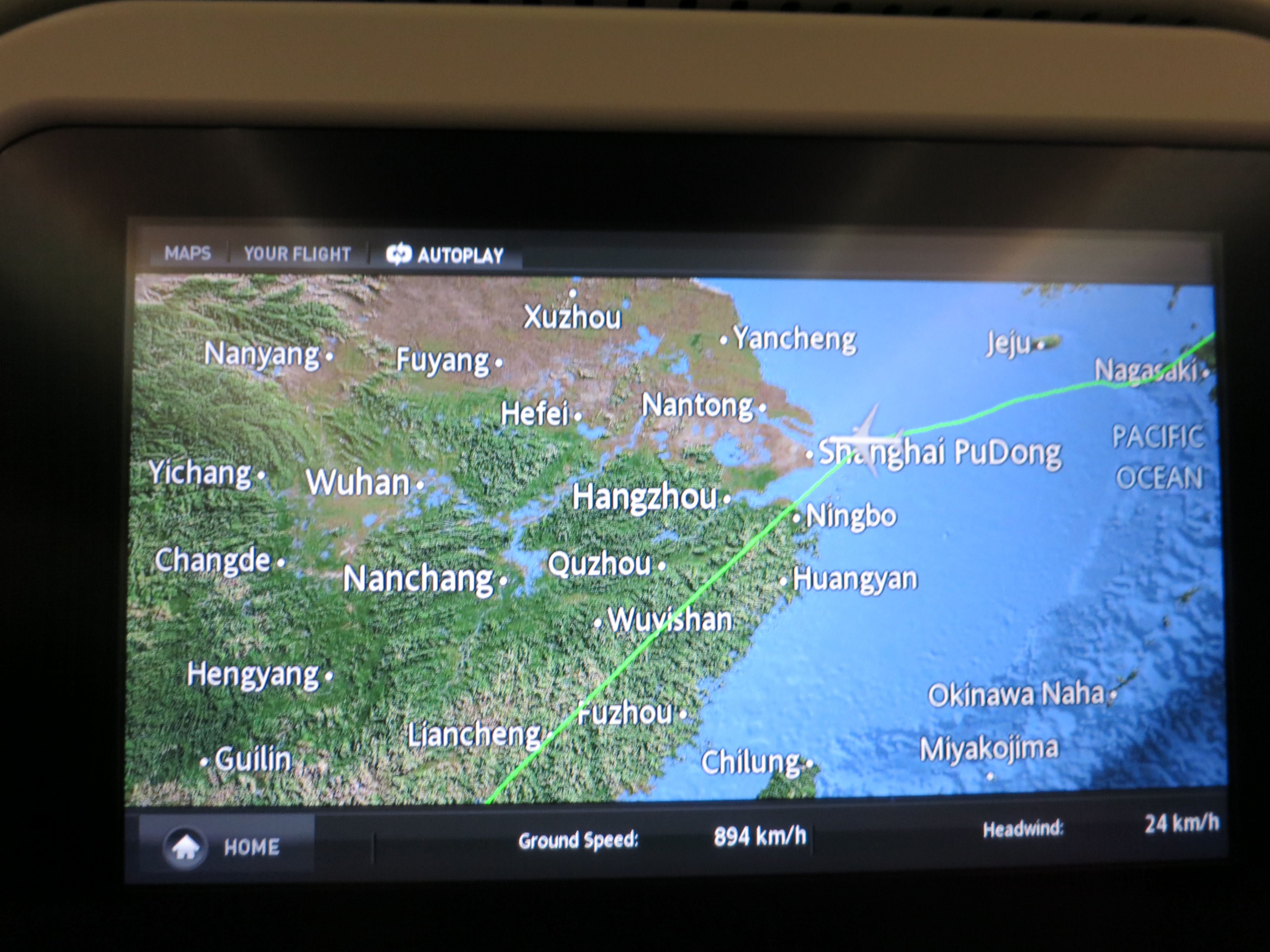 I also tried my brother's meal of the pasta, which had eaten one too many sandwiches. It was cold but tasted alright. 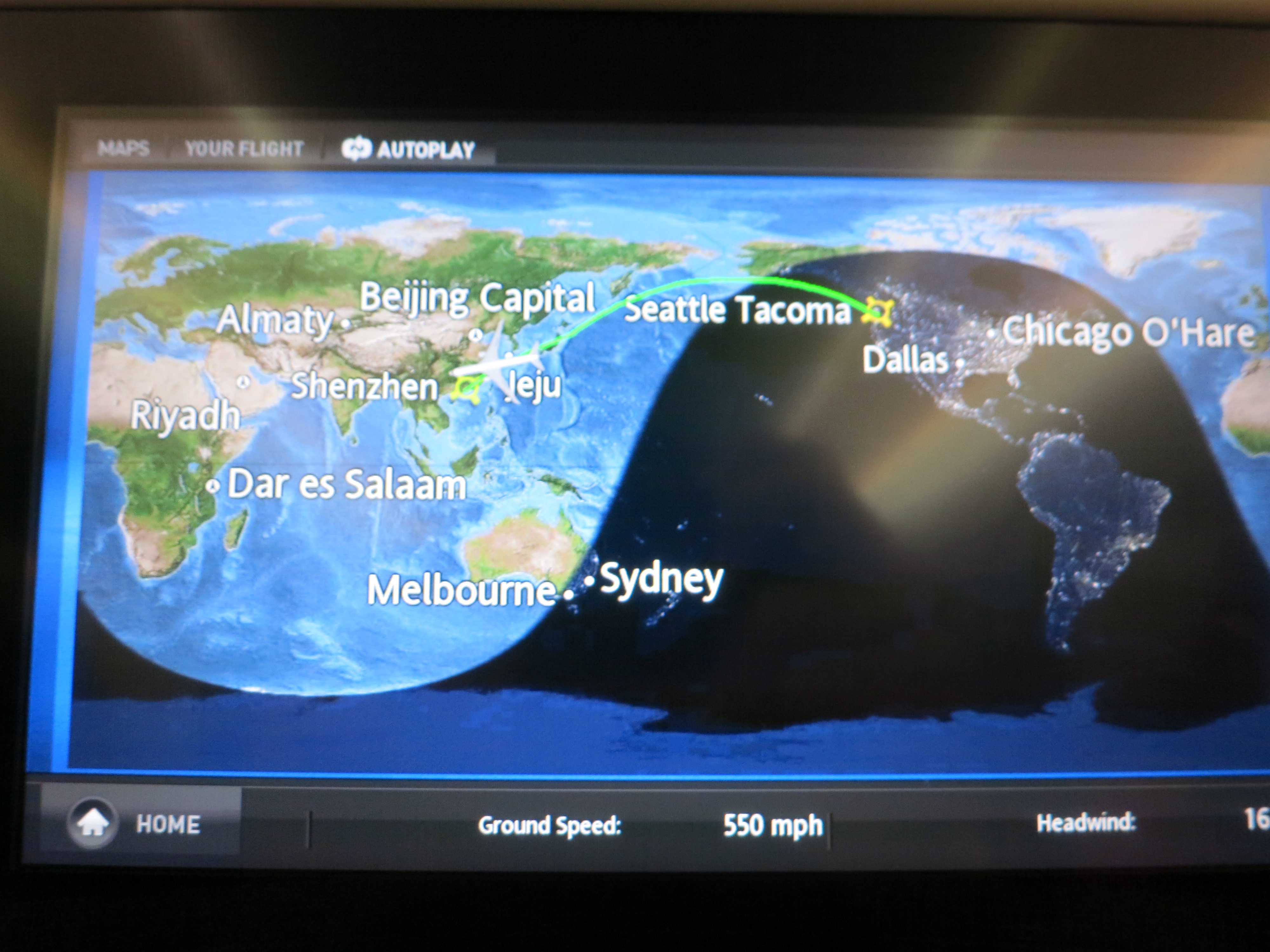 Eventually we were descending to the pre-recorded announcements and touched down with a loud thud with a couple passengers screaming or moaning at 17:18 (+1 day). Funny enough I wanted that to happen given a man in row 41, the first row, kept trading off with his family "upgrading" to Business class and given how quiet the Dreamliner was, I could hear his loud snoring :D!

Clearing security was a breeze since we were sitting in the front and needed to check in with ZH in the beautiful Shenzhen airport terminal.
See more

Given off this experience, XiamenAir is easily one of the best economy experiences out there, with excellent food and pretty generous pitch. The IFE content was not really that appealing to my tastes, but was a lot better on my return flight. The flight attendants were exceptional, being very interactive with passengers, even chatting with the little kids and playing around with a little one didn't eat his/her carrots. Even though they are quite great, one critique is their English, which was barely audible through the PA, but OK I guess for face to face interaction, which I hope they have address. Overall a good deal if you can find them and they are really good!