While my first flight was over relatively quickly and I was off the plane very shortly, I had to pass through a empty clean hallway to get to another border control and security check, however unfortunately the border control did not accept my online check-in paper format of KLM as he was not familiar with it and pointed me with many fingers and Russian gibberish (it does sound like gibberish to me as I do not speak a word Russian :p) to a desk where I had to obtain a new boarding card. While obtaining it within a matter of minutes, the border control was rather busy and had me waiting for another five to pass it in which I was only left with a security check. This security check was pretty standard and it was only necessary to unload all items of my trousers, while my ipad and notebook could remain in my bags (saved me a few minutes there).

This entire procedure took around five a ten minutes and I had yet another 6 hours of waiting. I myself decided to position myself and check up on my emails and other documentation, which I had left alone for about a week as I was on night duty the previous week. After a hour or two, I decided to move myself to Terminal F as my flight would depart from there. I did manage to do some plane spotting
(You'll be able to find some photos in my previous flight log) and exploring the shops around as it was a 15 minute walk from Terminal E to F. Moscow Sheremetyevo has plenty of shops, but unfortunately not really that much of variety as 75% of the stores are general stores selling you spirits or some famous Russian chocolate or candies…. (rather disappointing). There are a number of coffee shops, bars and some restaurants to your availability. After a few more hours, I decided to have some food in a hamburger stall and decided to order a Chinese styled Hamburger, which was ok in taste, but offered to you in a rather sad way. After finishing it was another waiting journey till boarding started.

Impression of the actual food being served in terminal to me with a drink. Drink was rather tasteful, but in a plastic cup is not my style. 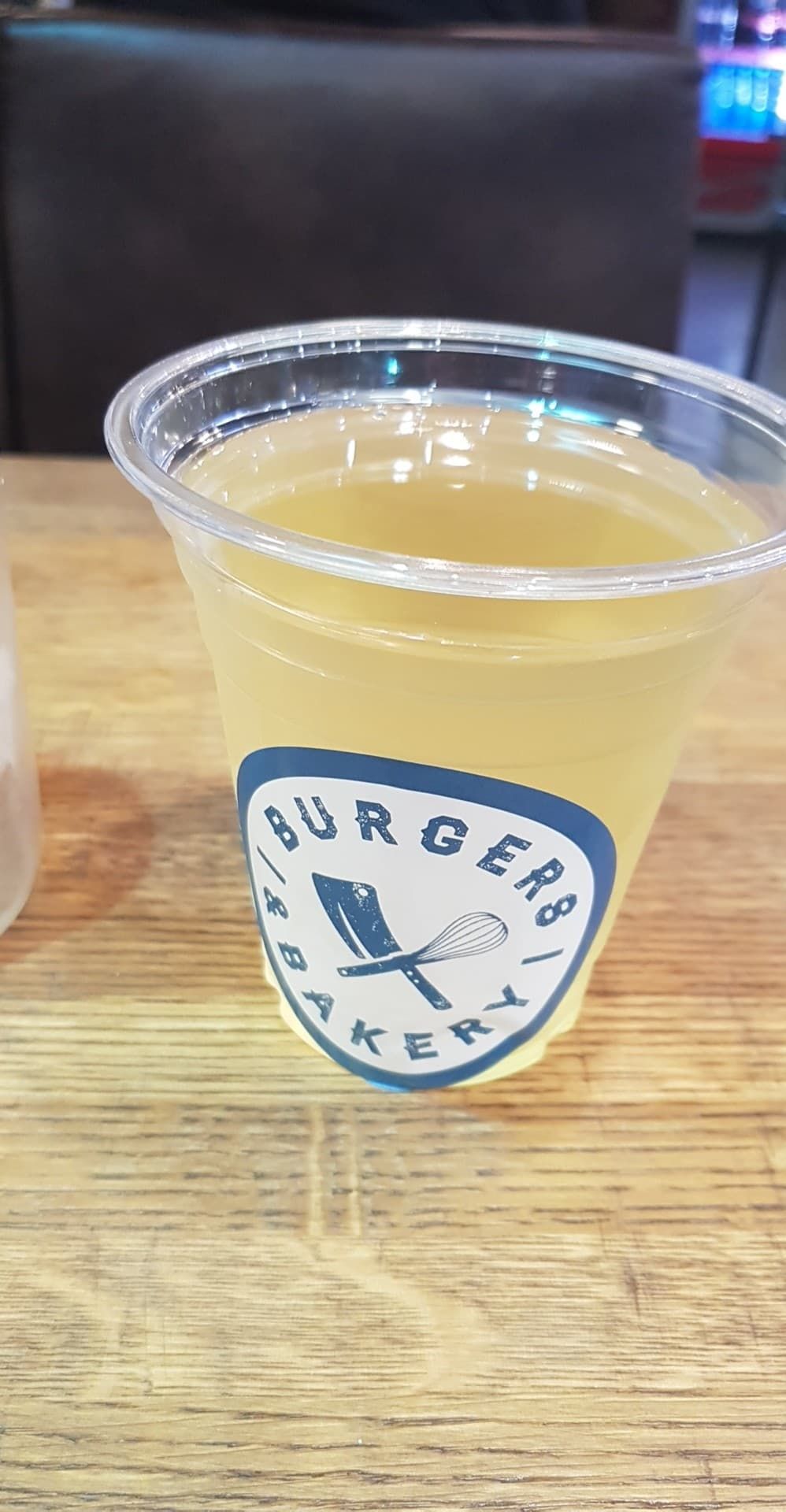 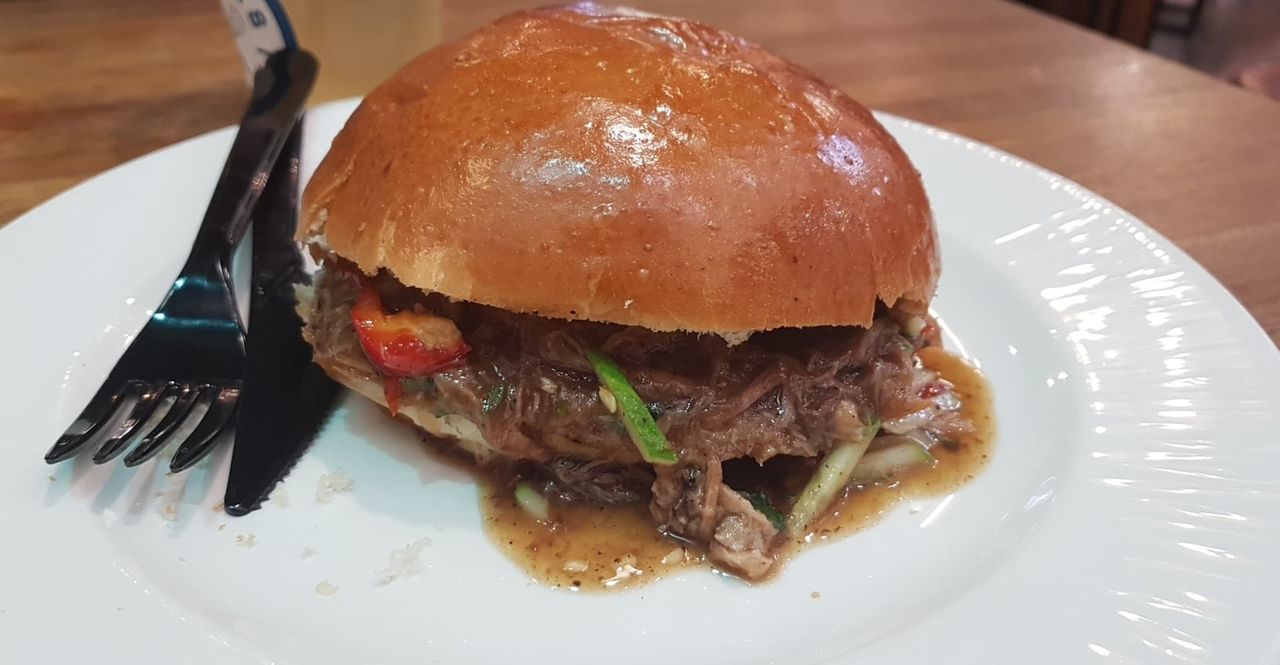 Boarding eventually started and unfortunately the gate it was assigned to did not give me a chance to capture the aircraft that was being used (nor did it give one in Bangkok either!). The aircraft used by Aeroflot for SU270 from Moscow to Bangkok Suvarnabhumi is an Airbus A330-300 (Registration VP-BDD for the current flight), which was a pretty new aircraft and in a very good condition. While the boarding call was initiated, it was already quite busy, but went in an orderly manner as most people lined up in a nice line by themselves (as there are not really given lines at the airport).

While being inside the aircraft, I moved myself up to seat 14A, which I was assigned to with a splendid view I must say so. 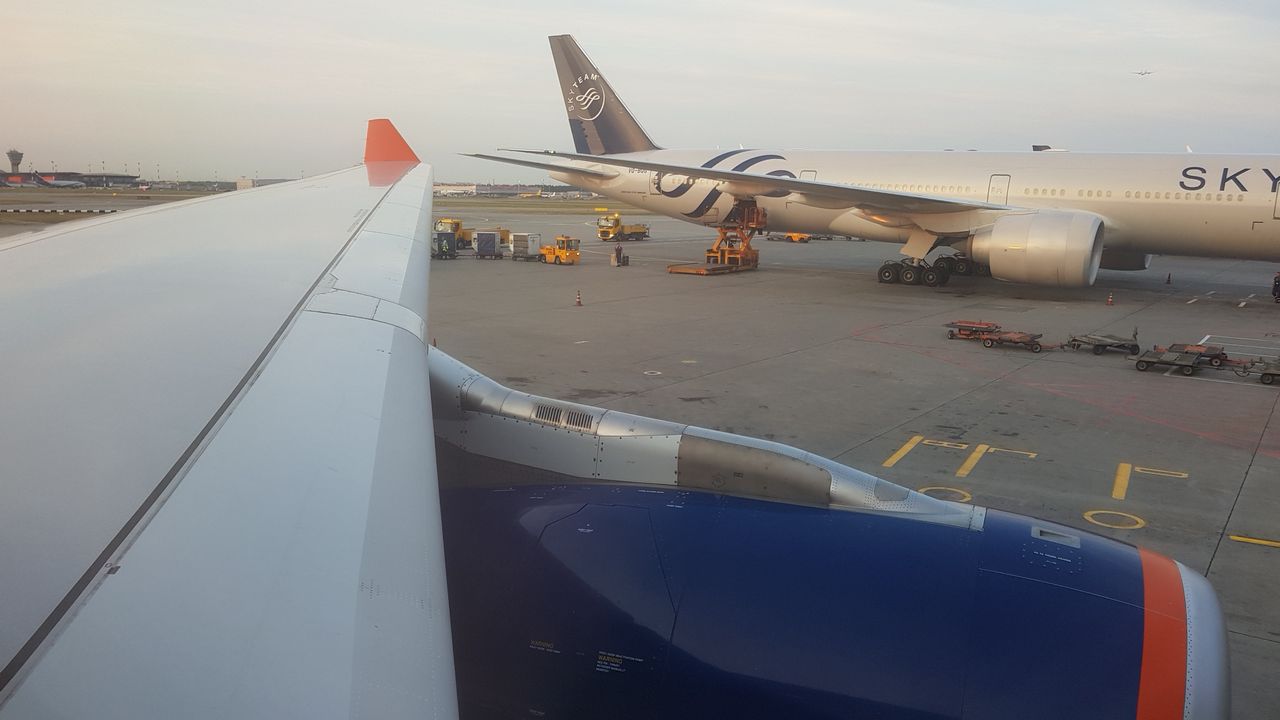 Aeroflot's configuration they are using for their Airbus A333 is a 2-4-2 configuration with standard legroom (though definitely less (3cm) than the longhaul fleet of KLM for instance) with blue and orange leather seats, which were a comfortable seat but became a nuisance over a longer period of time. The personal entertainment system being used by Aeroflot was offering plenty of videos, but was rather slow-working with a rather small display either. 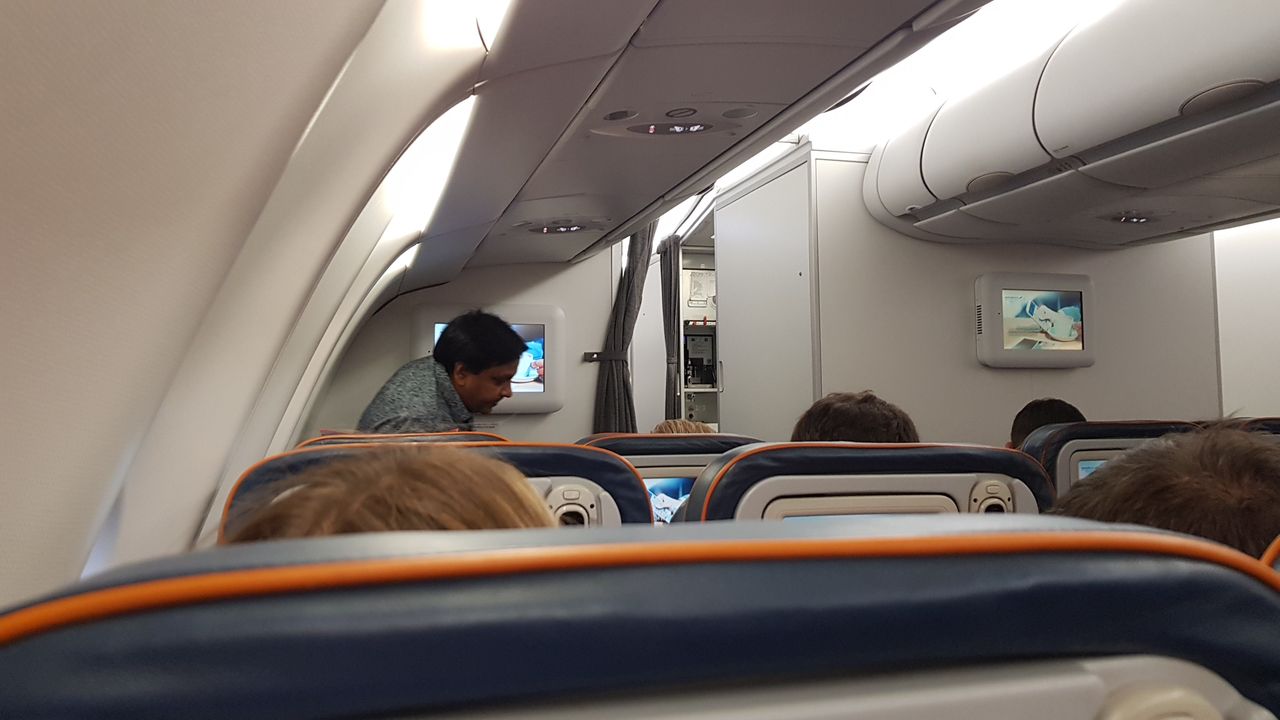 While everyone was seated and the gate was retracted, the flight safety video of Aeroflot was being displayed on our screens. Check below for Aeroflot's Safety Video. The personnel in those videos are working with the airline itself too. Though a small reminder, but most of Aeroflot's flight attendants are not nearly as to what Aeroflot likes to display to us.


Once finished with the video, push back was initiated by the pilots one minute ahead of time. Engine start took about seven minutes and we were on our way to RWY 06R for a early easterly bound departure to Bangkok Suvarnabhumi. The taxiing to the runway was rather slow, which gave me some time to look around the airport once more for me to find any unfamiliar airline (though 90% was Aeroflot haha!). 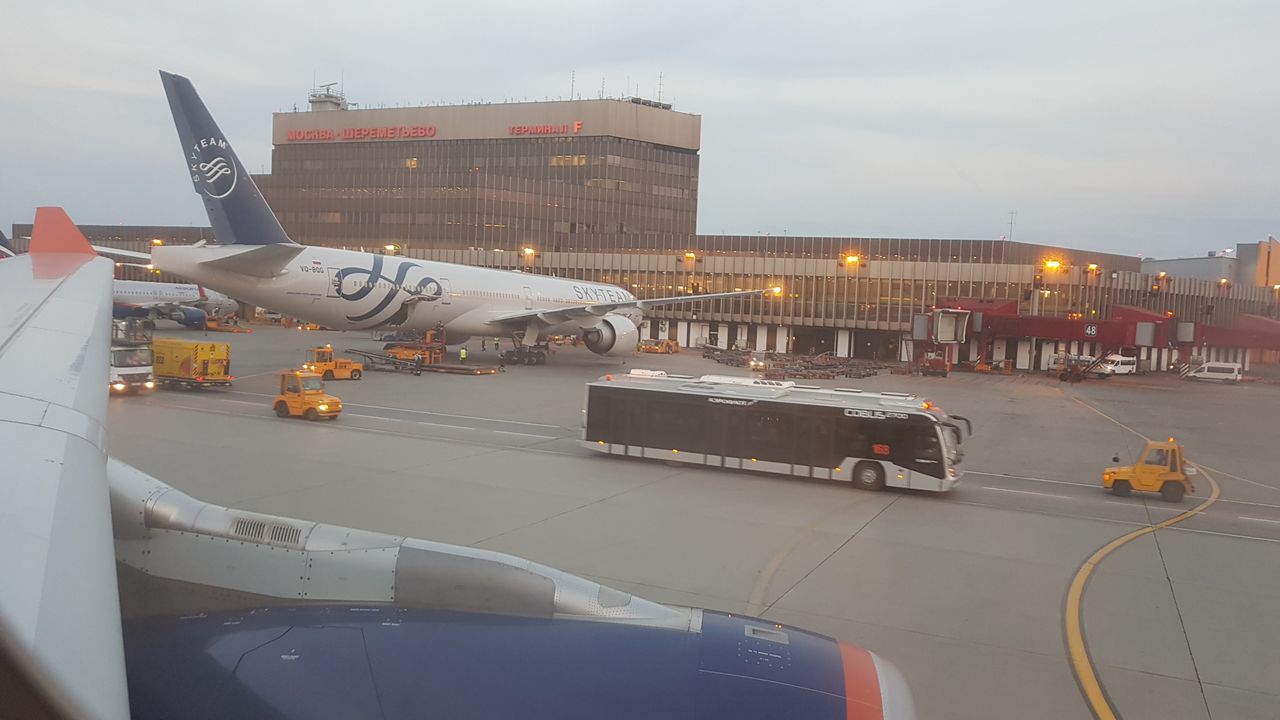 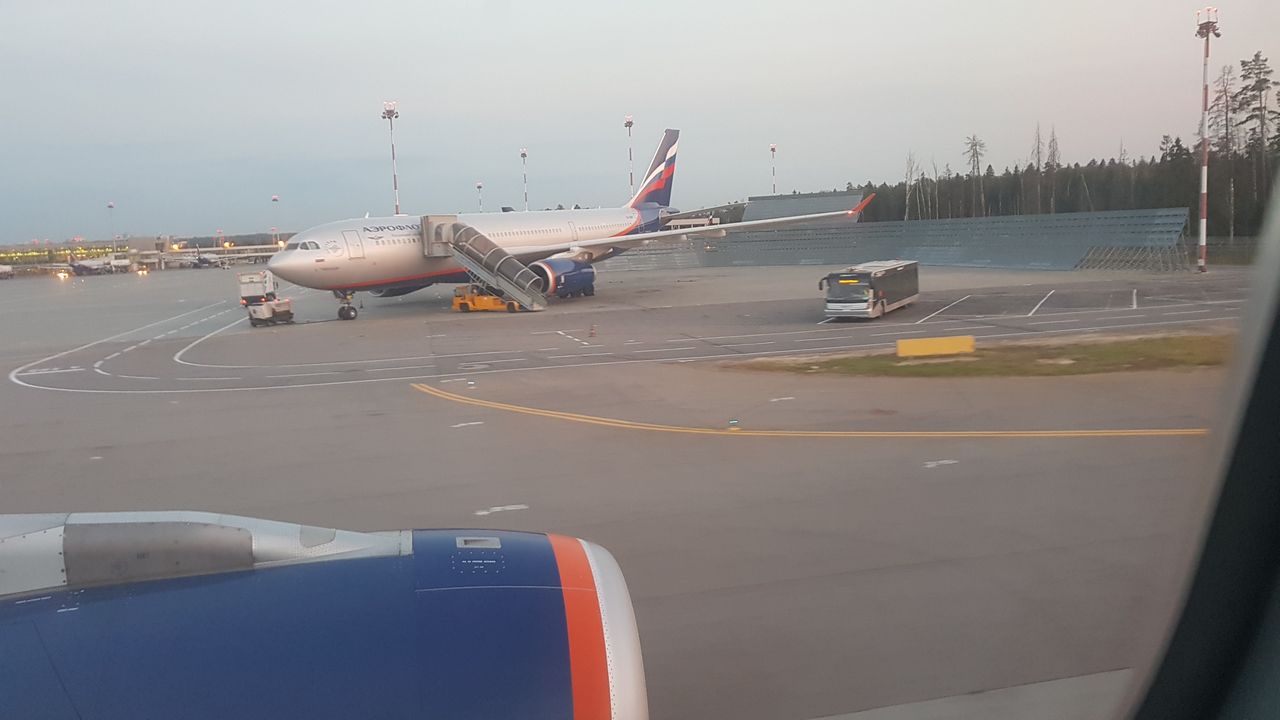 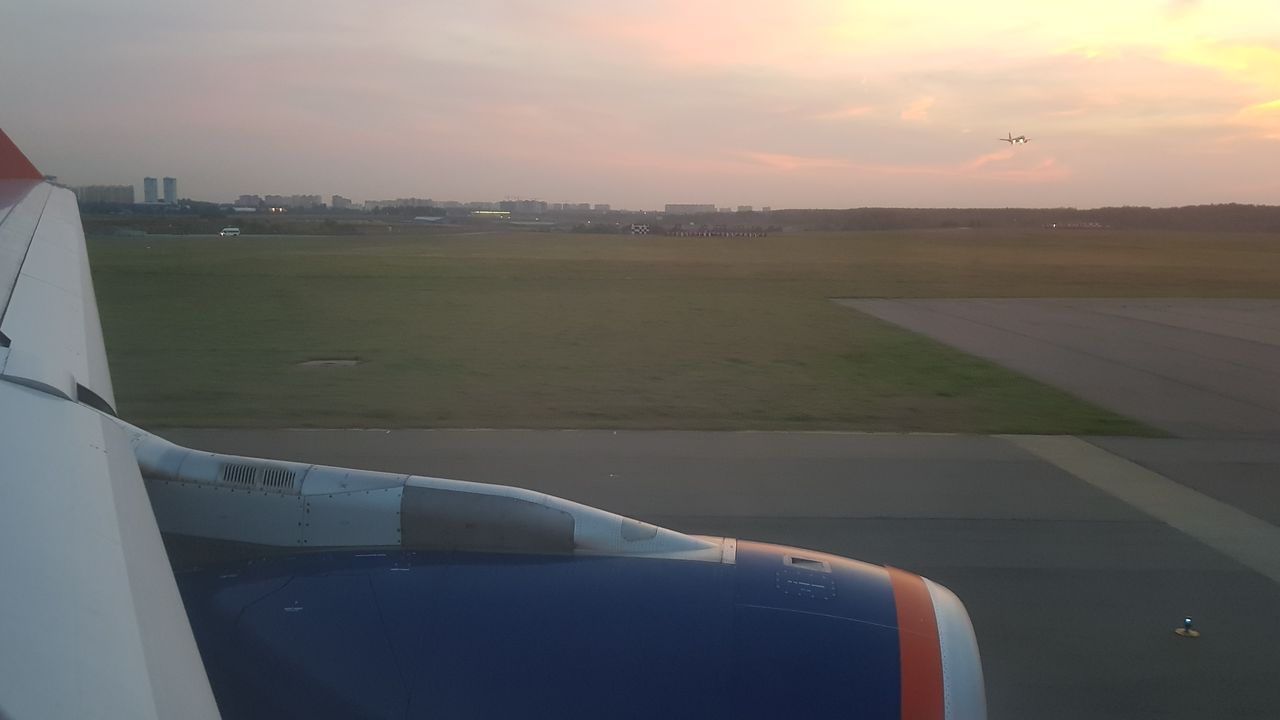 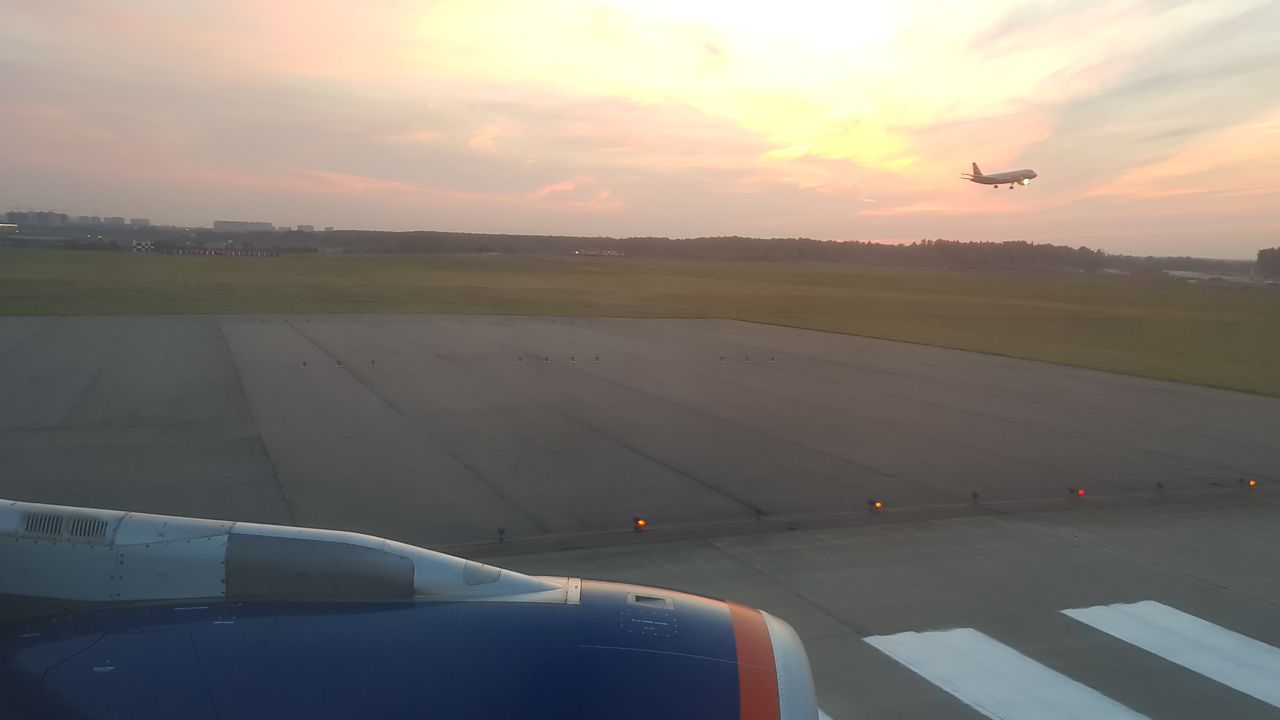 We were cleared for line up the moment we reached our runway, though I couldn't stop enjoying the ongoing sunset with an aircraft arriving on the runway exactly parallel to us. Once this aircraft in approach was landed and reached a certain speed, we were rolling down the runway for take off. While departed on time, the darkness arrived soon and in about 40 minutes of the flight, the flight attendants started to serve us some drinks. (Don't expect much choice though as Aeroflot only offers Water, Juices, Soda and Coffee/tea on board of all their flights, so no chance for an alcoholic drink).

After the round of drinks , a small clean up of the cups was in progress and yet the food was served (mind you that it is without any drink!) and we were given an option to choose between beef or fish. I opted for the beef as the side dishes together with that fish did not really sound like a good combination. Food was rather poor in taste and was displayed in yet another very sad sight. Took some bites, but could not eat more than 25% of the entire food being offered on my plate.

Yet another round of clean up and some coffee/tea to your availability, I decided to skip and to get some sleep. Even though it was in a proper 2-4-2 config, I did struggle to get some sleep as the cabin temperature was a bit on the high side from my point of view. Just like I said that I liked their leather seats, It now became a pain in the ass after 3 or 4 hours into the flight in comparison with their cabin heat….

2.5 hours prior to our landing, another round of food was being served in the Aeroflot way. Drinks first, clean up, meal, clean up and coffee/tea. The breakfast option for today was an omelette or pancakes. I opted for the pancakes as omelettes are usually just a bite of plastic. Pancakes were again displayed in a very poor manner, but was to my surprise quite edible.

Tourist visa's are being served to you in flight too by Aeroflot to enter Thailand and I did receive a Sky Priority pass by Aeroflot, because I was a business passenger on the first flight with KLM.

Landing was initiated and we had a rather two-bump landing in Bangkok Suvarnabhumi for yet another very very very slow taxi to our gates (I think we have been surpassed by several other landing aircrafts). At the gate, deboarding was quickly initiated and we were off to customs. Did not decide to use my Sky priority pass as customs was very very quiet. After a few minutes, I did decide to exchange my money before heading to my designated belt to pick up my luggage. Luggage was dropped shortly after arriving to my belt as it did contain a Sky Priority sticker.
See more

For the price they charged me to do this flight, it was unbeatable by any airliner. However it was an okay experience, I am not sure I would decide to use this option once again. I found the legroom not the best compared to other Skyteam partners, the food was very poor and Moscow Sheremetyevo airport is one of the most boring major airports I have been on, not the cleanest too.

The contributors of Flight-Report published 4 reviews of 1 airlines on the route Moscow (SVO) → Bangkok (BKK).

The airline with the best average rating is Aeroflot with 6.9/10.

The average flight time is 9 hours and 7 minutes.