#35 out of 71 Airlines A minimum of 10 flight-reports within the past two years is required to appear in the rankings. 872 reviews

Far from our friend Marathon in the country of Ikea with his FR in kit or to know everything about his shuttle in Airbus you take the boarding of FR n° 27 with the flight of FR n° 44, the plateau of FR n°88, etc.. There are 117 FR CDG-ARN by his care in the box, some of them in duplicate in theentente cordiale mode: pick it up!

No no no no no… it's both much simpler and much more complex!

You know my basic routing… the only variant is related to May 1st and the bridge that goes with it. Instead of going back and forth on Tuesday/Wednesday, it will be exceptional Wednesday/Thursday… what a revolution! In short, nothing to justify a FR!

The outward journey will not be postponed (Arbeit as usual on a case of overtransposition of a Community text into French law, of happiness as a bar:) ) and will be without any relief (presence at the airport at the last moment, departure a few minutes late, arrival early, normal cabin crew, full cabin, very bad coffee,…) in short only a dream!

The return will be… epic! Indeed, as no one on the site is unaware, Air France is on strike! And that's where the trouble starts.

Anyone who says strike at Air Chance says this…

The vision of this strike by the management (which has since been at Pôle emploi):


The vision of bibi


Indeed, after the standardised message "Welcome to Paris Orly West, it is 10 a.m.; you can deactivate the plane mode" (known air), an SMS from the Air France ROC will fall like a guillotine blade: flight AF 7374 the next day is cancelled….
The ROC fallback solution (I'm getting used to it), is to wait until around 10pm to 11pm at D-1 to put passengers on the next day's flights. I should have taken the bets that I would be accused of on the flight from Orly at 07:00 the next day to an English bookmaker.

Except that sleeping in Orly -if AF finds room in a decent hotel there - to get up at dawn with reduced alternatives is for me closer to an act of torture, inhuman and degrading treatment prohibited by all international conventions… Because if the hotel is not in Orly itself it is waking up at around 4 am.
Being aware of the limits of the machines in case of a disturbed situation, as soon as I arrive in Orly I go to the Skypriority counter (which is quite new) where the waiting will be zero and the staff charming. The status may have a lot to do with it, but I think that in their "bubble" they should not suffer the same bird names as those coming from thevulgum pecum or the commercial coffee. This must undoubtedly play a role.

In short, in 2, maybe 3 minutes I have confirmed that no flight to Brest that has not been cancelled has a free seat on departure from CDG or ORY. I therefore ask if it is possible to be re-routed to Quimper with the evening flight and taken care of locally (which I had already observed as possible). Positive answer for re-routing with the information that the information is being transmitted to whoever is entitled, and that if no confirmation is given to me, AF should be contacted.

This will allow me to test the Embraer 145 before it is withdrawn from the fleet and to see for myself the Quimper Cornwall airport, which is similar to the 18th Field Division airport. In short, an adventure at the end of the world!

On Thursday in question, I inform my beloved boss and beloved chef, O that his glory be recognized, that it is the Bérézina on the Orly side and that if I do not want to play the Dardanelles or Waterloo again, I will have to leave early. Request granted without the slightest worry and with a smile because I am the only one who does not cancel all his trips on strike days in case of a zou.

Except that my little finger, it is often of good advice, whispered in my ear that this day deserves great leeway and not to leave Paris at the usual time.

My little finger was great (as always, it's normal it's mine)…

The crossing of Paris was epic, the A6 motorway slowed down and blocked, the work of Orly Sud was nightmarish… and - supreme pity - my taxi was not allowed to enter Orly through the automatic barrier. So I finish my race at 7:30 p.m. (1:15 p.m. my good man) on the access ramp to Orly that I have to walk along… under the suspicious and inquisitive eye of the maréchaussée.


Considering the time, timing and context, direct direction the PIF because as the well-known Breton saying goes:
"At the slightest glitch, it's Formula One! »

I would rather fast and go home than eat and stay there (but the basic option - belt and suspenders, you know me - is to eat well and go home equally well).


There are in fact few people (given the number of flights cancelled, it is not surprising), access n° 1 being congested, I am made to go through the next line not without having invoiced the airline for the passage at the high rate to the airline. A slower breeze but honestly nothing embarrassing. All with a smile but with the questionnaire as a matter of course (no water bottles, computers, toiletries, C4, Автомат Калашникова 47, etc.).

It is 7:38 p.m.; direction the toilets (clean) then the Salon du Hall 2 d'Orly… to hope to fill up with Provençal baguettes, sesame crackers, and other gourmet dishes according to the under-starred chefs of Air France… In the war as in the war!

First miracle of creation: there are sandwiches!


And also a little pork butcher (rosette), county and turkey.

No time to drag on, boarding is announced. First to go through the door 20 B and… beep!
After the immediate fear of denied boarding for overbooking, I was told that I was in the emergency exit… which proved to be half false, half true.

Second miracle: the press is there and in large quantities (not bad for a 50-seat plane)…


Except that then no miracle, who says Embraer and Hall 2, says Pax-bus…..
Not Cobus but SNCF powered (Keolis is SNCF). But Keolis is well equipped:

The minute of general knowledge is essential…..

I'm in 2A… so I saw it stolen from the cockpit. It is better not to be 1.90 metres tall for passengers and to exceed 1.70 metres is dangerous for NWPs.


Indeed, there is an emergency exit on the other side of the aircraft with the galley in front….


I would have no ad hoc instructions.

Given the size of the trunks, the cabin crew will require cabin baggage to be placed in the hold. But passengers and luggage will have to be recalled because the ground staff did not ask them if there were lithium elements in them. The answer will be yes. So we empty the bunkers.

Seen on the car radio on board. An audio CD includes the standard announcements. This clearly makes Sunday craftsmanship clear.

We are waiting for a last pax in short missed connection on Lorient which is re-routed to Quimper. Good except that they will plant the other 3 pax in the same situation including a pregnant woman on the grounds that she only had to run between the halls. The ground staff can be charming sometimes, personally an escort or an airside vehicle would have been more appropriate.

Then, closing the doors. The cabin crew will then check with the flashlight for leaks or defective closing mechanisms. Atmosphere!

Well, let's push it back.

Hold a masked bandit who's subcontracting A5 right now!

A historic occupant and a new one

Let's go for the fun

Note: an abandoned African airbus, dwellings that do not comply with the noise exposure plan and Paris in the background.

The Valenton construction site with the LGV passing over it

A short break after level 100.
The master of the meter, the great and powerful Marathon will be happy: men can take care of their offspring in Brazil and Brittany!

Small is small… too small!


Bring us lots of fun and strong drinks!

We arrive in Brittany… the border is materialized by the clouds


And that's the tragedy; nothing is planned to bring me back to Brest. I will therefore see the ground staff (who also do parking staff, rental car, etc.) to find out what happens next.

Out of habit, weariness or whatever, I expected a "what can I do about it? ». Well, no!
The clerk informed me that I had to wait for the return of her boss (who will be here in 5-10 minutes) because she knew nothing except a pax for Lorient to reroute.
The chef arrives and asks for our names and itinerary. He then goes to the back shop to check our documents and contact Paris by phone.
Positive answer in 5 minutes but you have to wait for the arrival of a confirmation TELEX.
We were 5: 4 passengers travelling together and bibi.


Our care will be confirmed and two carriages will be assigned to our modest people. I would be alone in my taxi (stuck Emirates) and happy to have a direct pick-up voucher…
The painful one hurts for Air Chance!


Jokingly aside, my last cancellation cost them, a meal, a night in a hotel, a taxi… much more than that amount.

But good at 250 euros compensation, 231.02 euros taxi… the ticket at about 70 euros including tax is certainly not profitable! 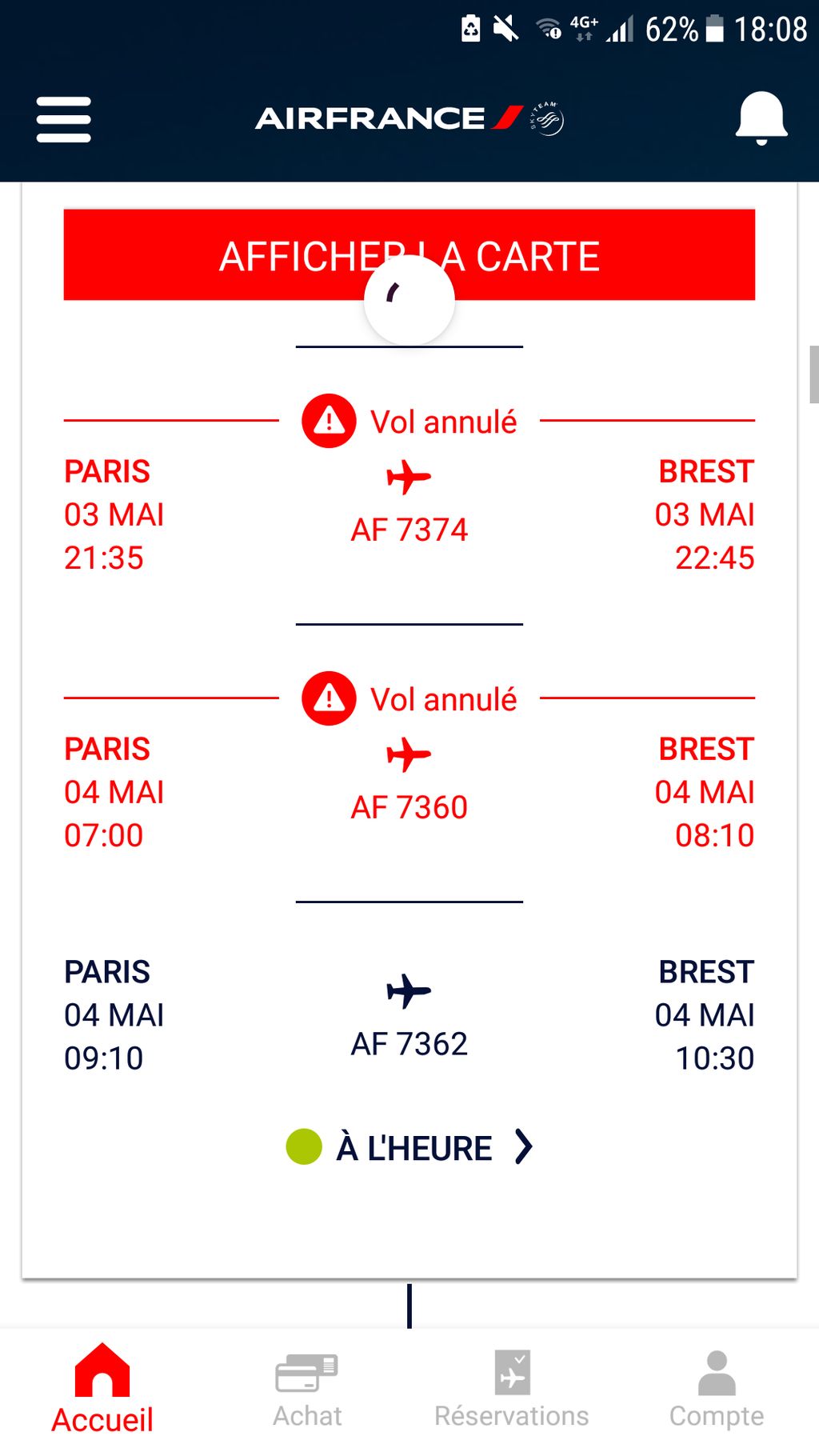 PS: my two flights of the 7th but are announced cancelled: oh joy!!!!
See more

What can I say?

The ORY-UIP flight was correct as such (even if the aging cabin is largely felt)...... except that it was not to UIP that I was going!
The alternative (the 1st flight the next day) was cancelled later... sic!

If I had followed the ROC blindly, I would have suffered a double cancellation, a short and therefore uncomfortable hotel night, a short restaurant meal of at least 200 to 400 euros for the company plus 250 euros compensation for the cancellation.

The contributors of Flight-Report published 9 reviews of 4 airlines on the route Paris (ORY) → Quimper (UIP).

He wrote 37 reviews about 5 airlines and 7 airports.