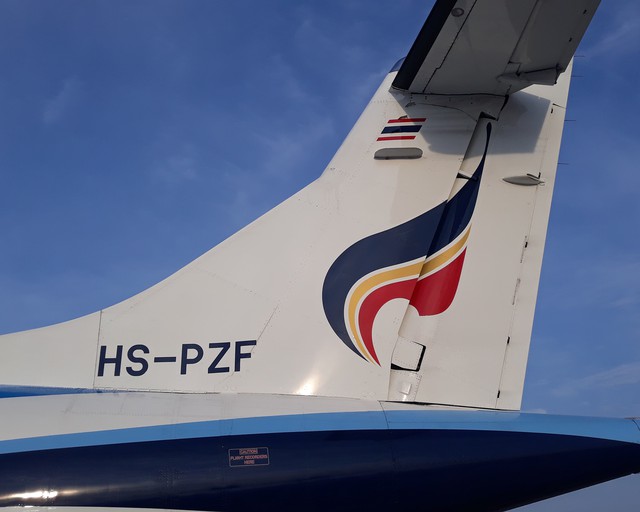 While I personally made a very enjoyable tour through Thailand once again with my girlfriend back in April 2018, I unfortunately was not really aware/active with flight report, so I did not bother to capture photos of the flights I took. Recently looking back to my photos, I noticed that I could make somehow one decent report of one of the flights I took. This flight was going to be a Bangkok Air flight from Phuket International to Hat Yai International Airport.

While our plan was to travel to Koh Lipe, we had two choices to go there from Phuket itself. One was to take a speedboat, which would be about five to six hours on a speedboat starting early morning or to grab a flight with Bangkok Air from Phuket International Airport to Hat Yai International Airport. Knowing me, I opted for the later one (even though it would be a longer day of travel). The ticket I bought costed me around 4.200 THB, which is more or less 120 euros with conversion rates included for two persons.

So the day before I had to leave, I decided to head to the famous avgeek beach ''Nai Yang Beach'', but unfortunately I did not really manage to capture some beautiful photos  as the wrong runway was in use… The courtesy of me! 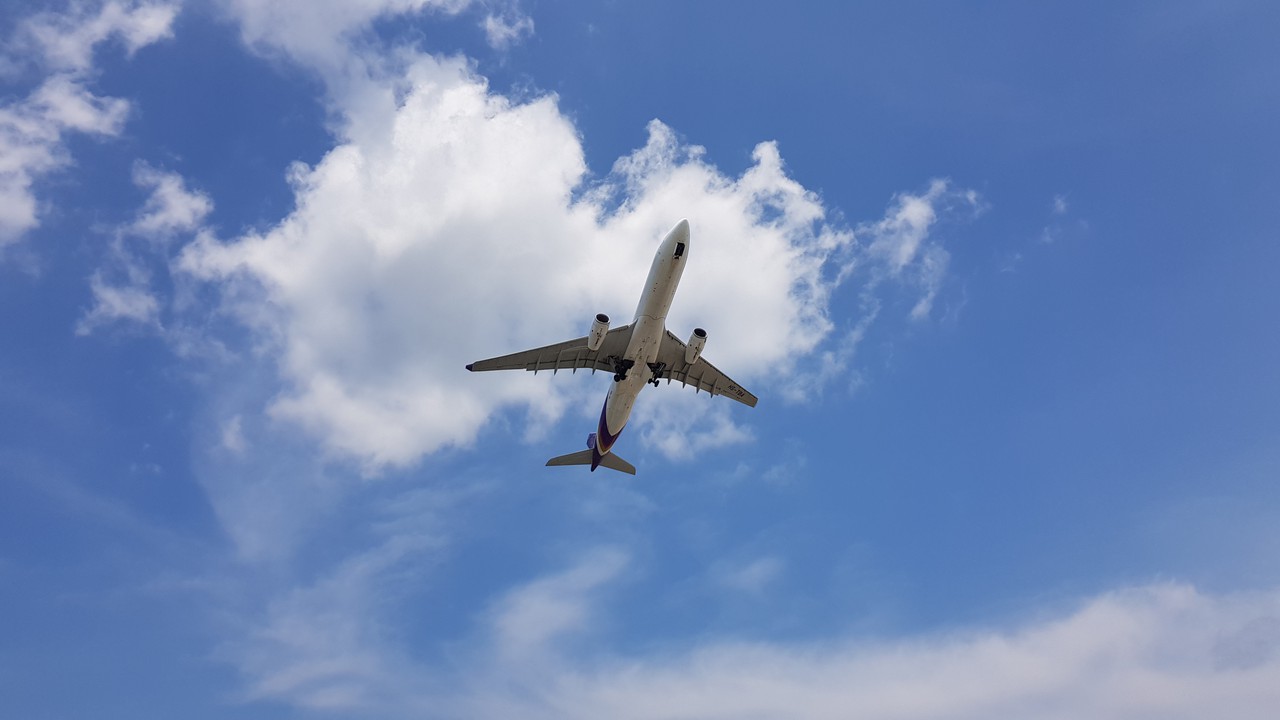 And an Airbus A320 of Thai AirAsia returning to Bangkok Don Mueang. 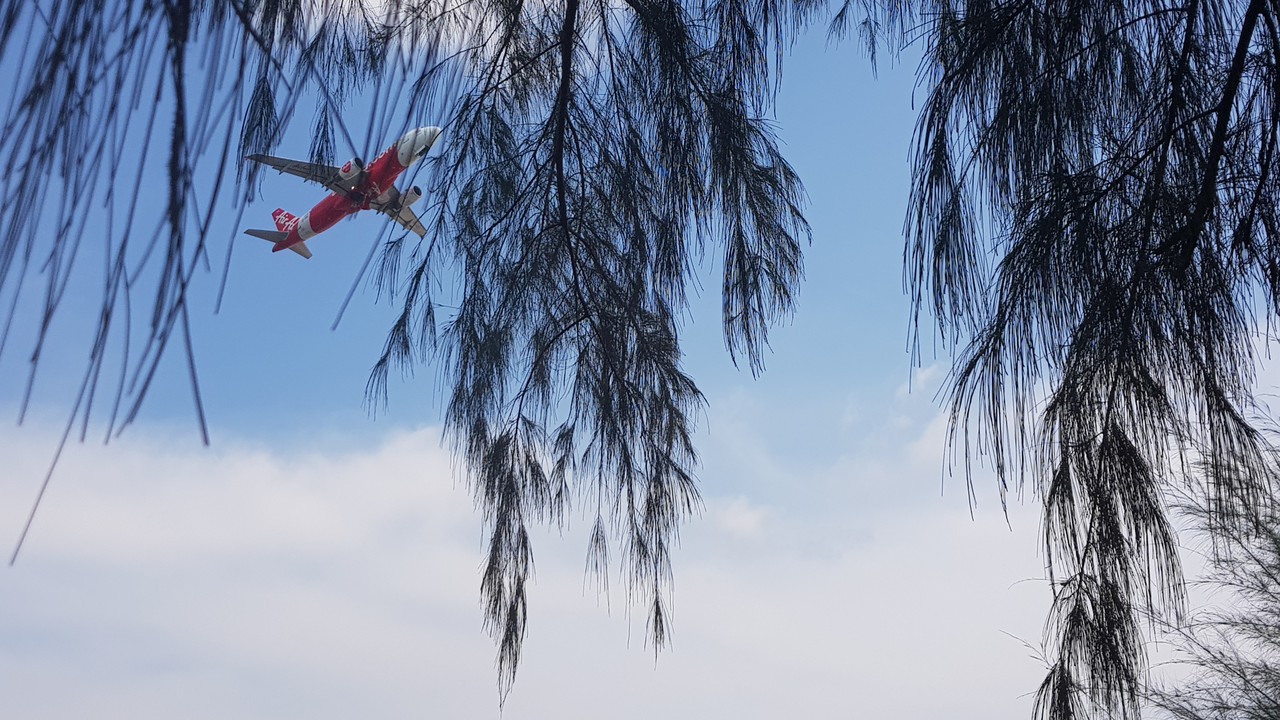 While I actually was glad to leave Phuket behind, I woke up rather early as we had to grab an early cab to the airport, which would take us about fifty minutes to reach. The taxi we ordered the day before was slightly late, but we arrived at the airport around 6 am in the morning if I recall correctly.

We then proceeded to the check in counter to get rid of our luggage as soon as possible, which barely took a minute as there were no people in front of us and security was clear too. Unfortunately at this time, the domestic terminal was under construction and did offer little to nothing.

With little actions or views, I somehow managed to capture the arrival of flight EK 396. A Boeing 777-300ER of Emirates. 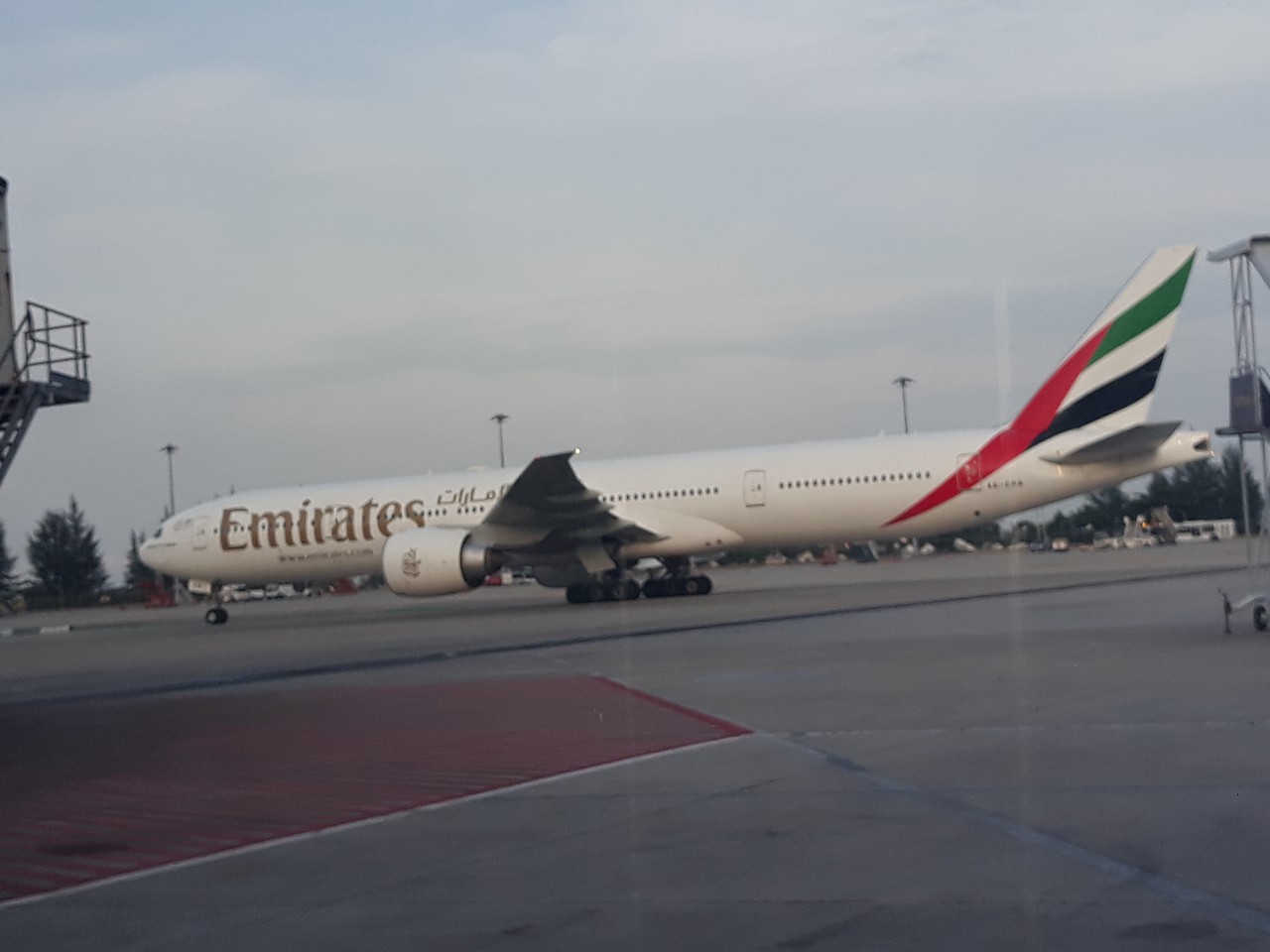 As it was the first flight of the day for this specific call, the boarding was called on-time and we would be shipped by bus to our aircraft, but it gave me a good view of this beautiful Nok Air who would depart to Bangkok (An A330 of Thai in the far back). It however took quite a time for the bus to start driving as some of the passengers were very late. It took a bit too long for the bus driver too I noticed as he fell in sleep only to wake up by the sound of his horn as his head was pushing the horn button on his steering wheel. The driver was super friendly though! After a short drive, our aircraft showed up and we said our byes to the bus driver. 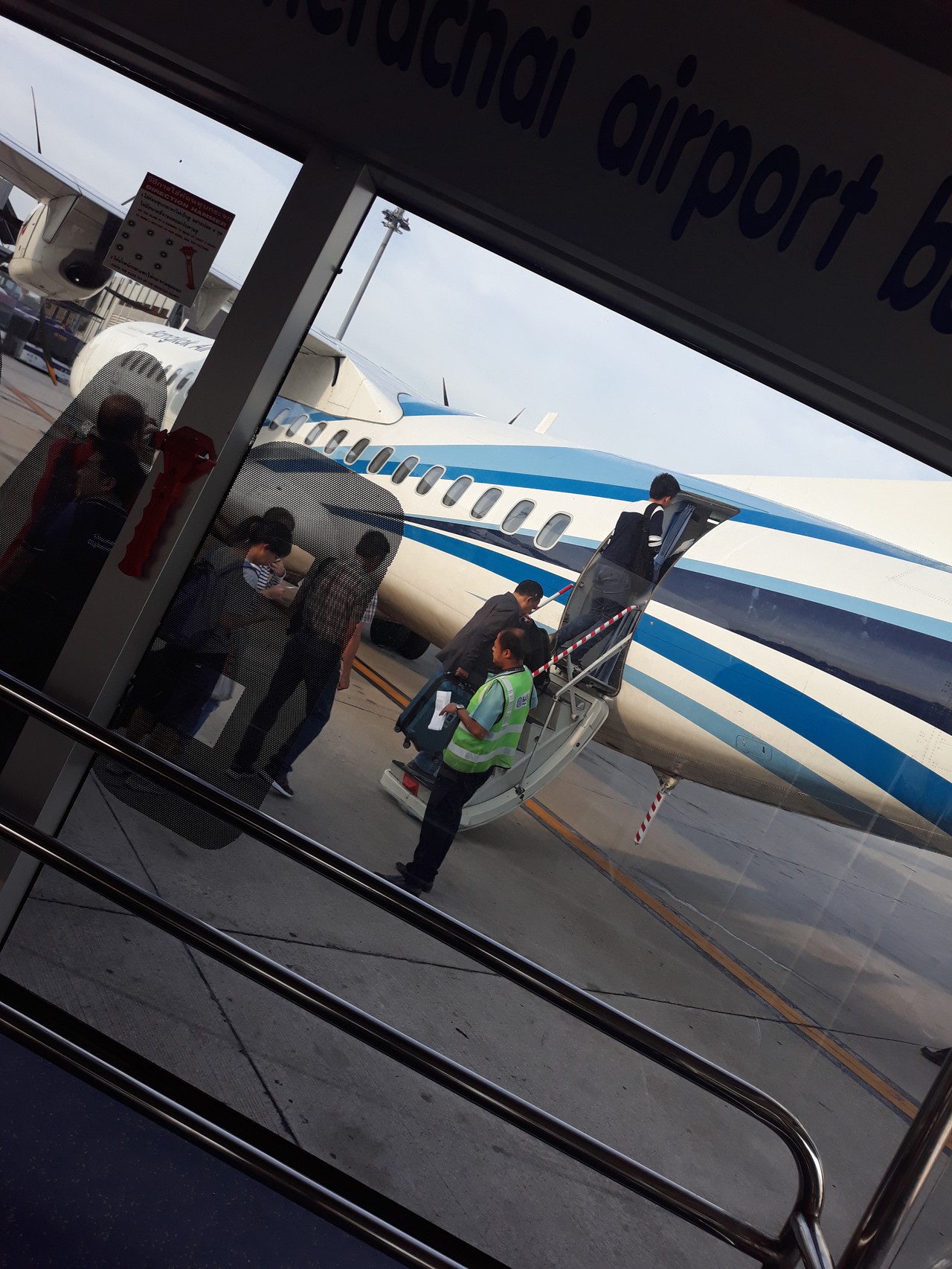 The flight today was going to be performed by HS-PZF. An ATR 72-600 who had solely been in service with Bangkok Airways and was only 2 years old at the time we flew it. 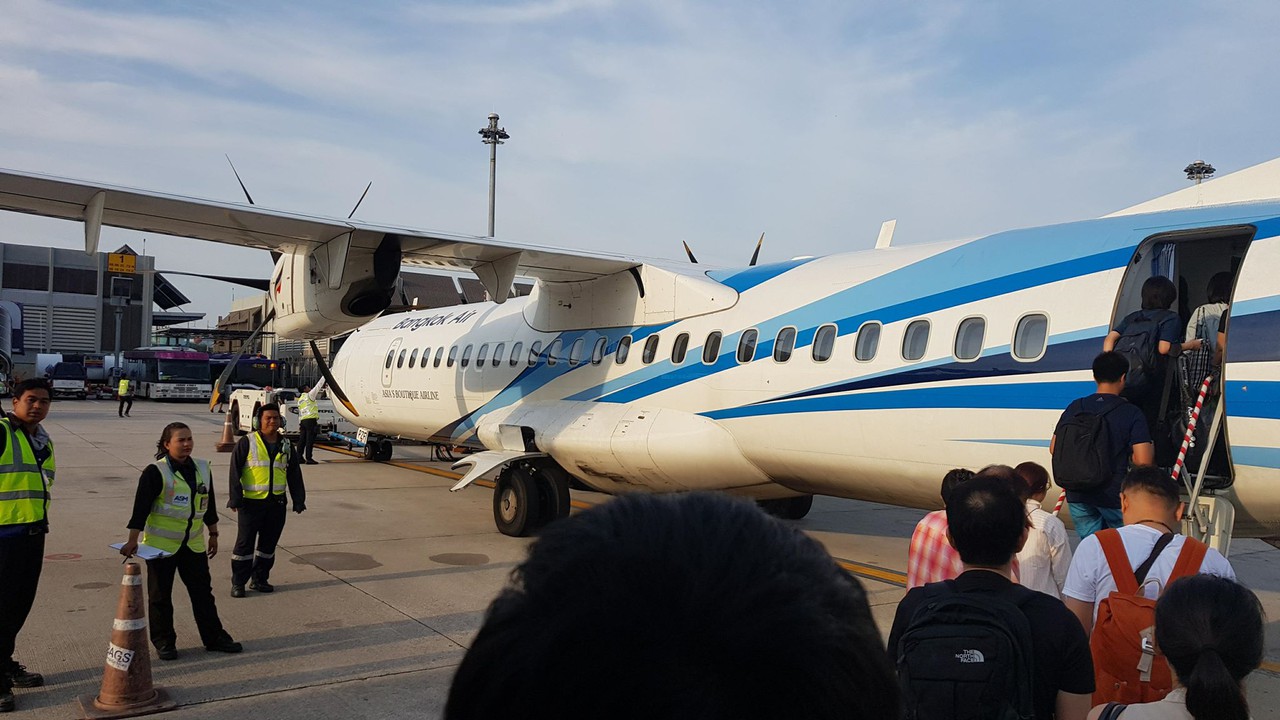 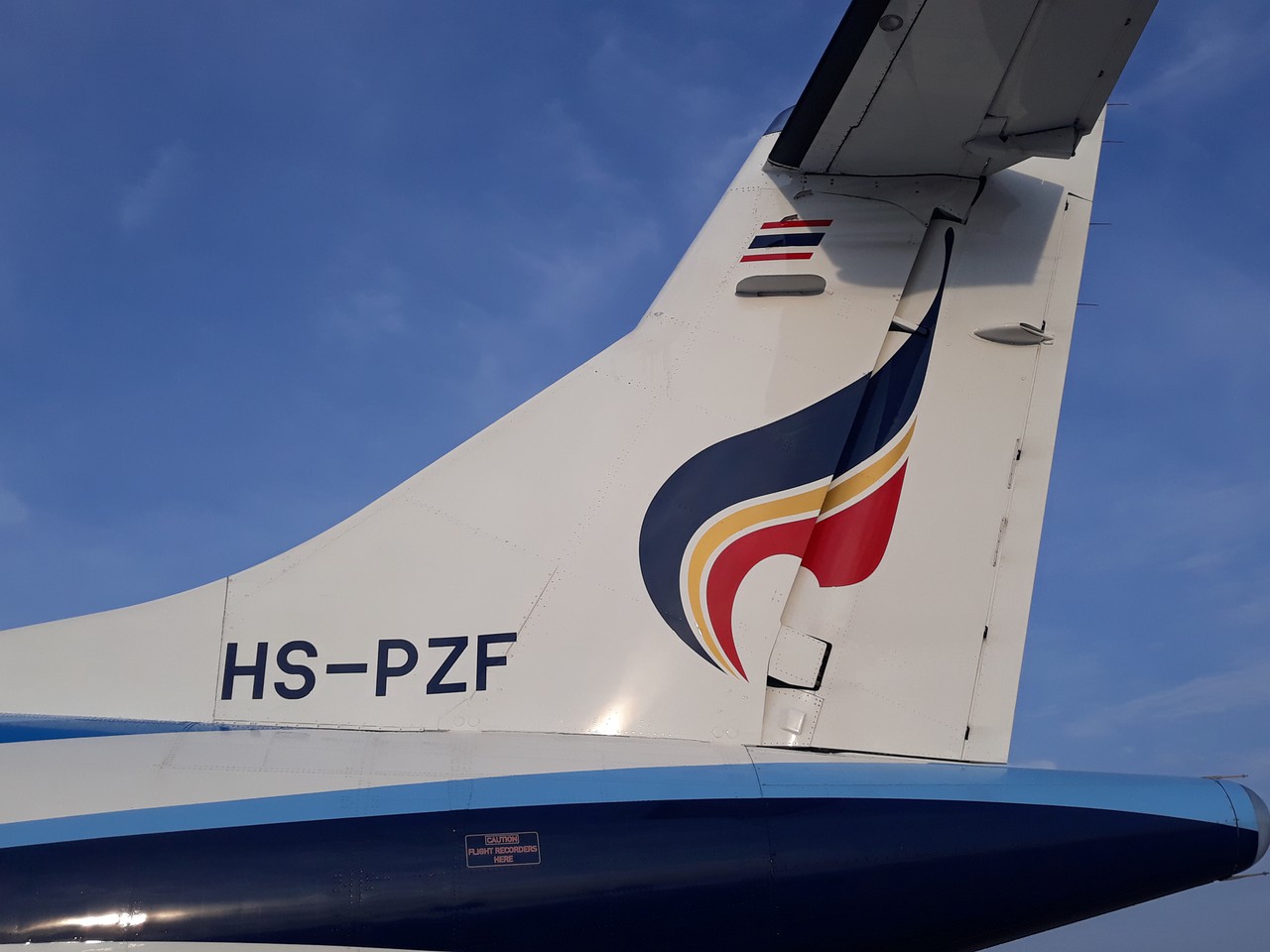 One last look of the aircraft before heading in, while the flight crew received their last papers from ground. 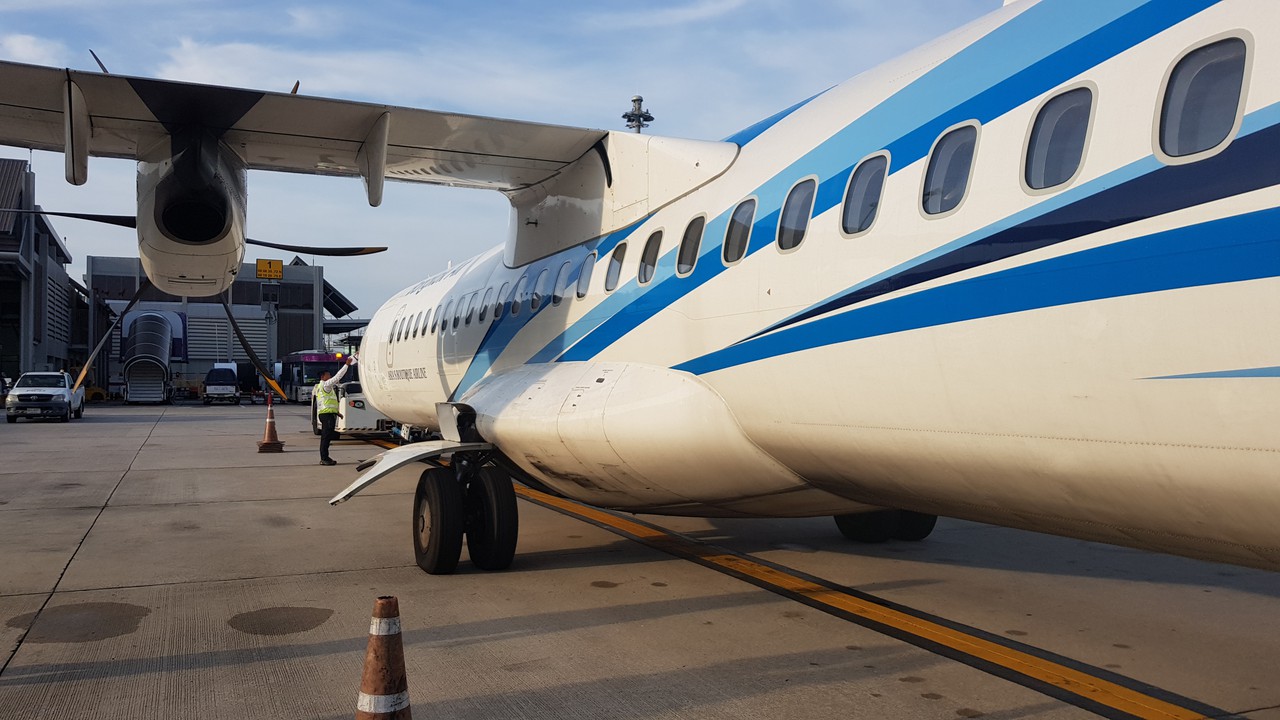 While I moved forward to my seat, I noticed some magic happened out there. The Nok Air Boeing 737-800 we saw earlier was now replaced by an Airbus A320 of Thai AirAsia. While the Thai Airways A330 was gone too! 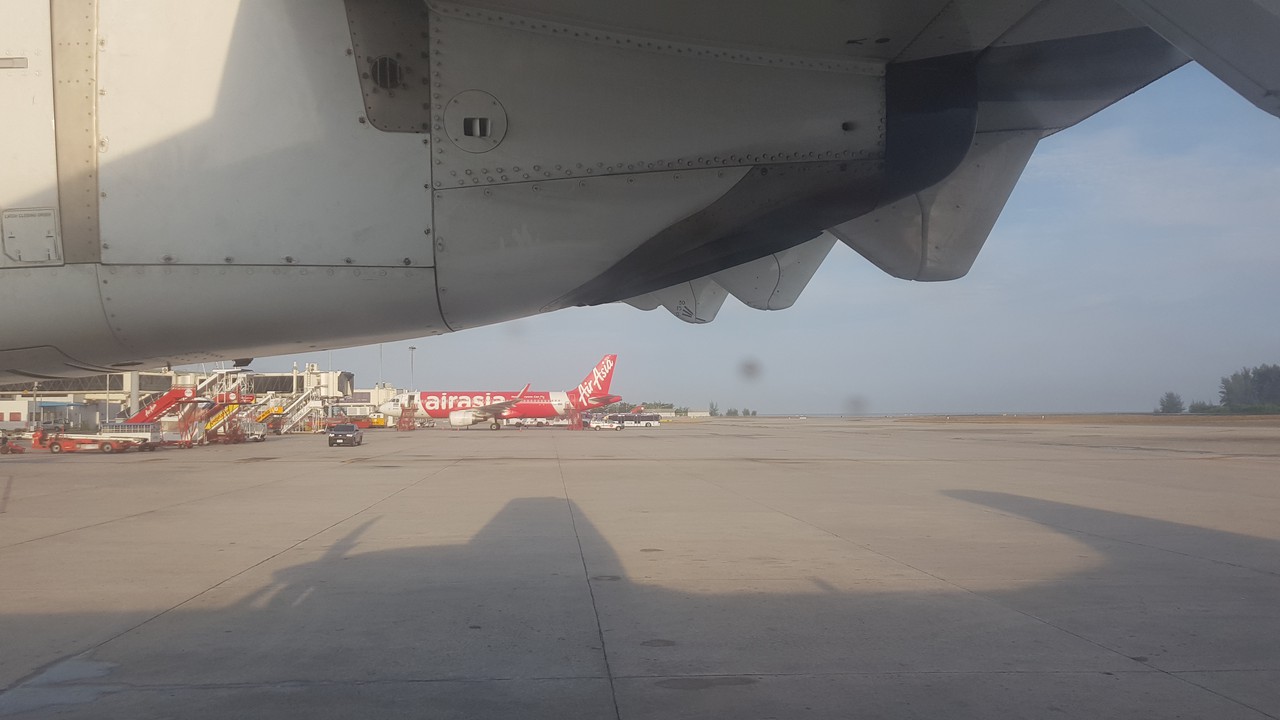 Pushback was performed on time, while those beautiful Pratt & Whitney's are firing up! And only a very few minutes later we were already on the runway waiting for our departure. 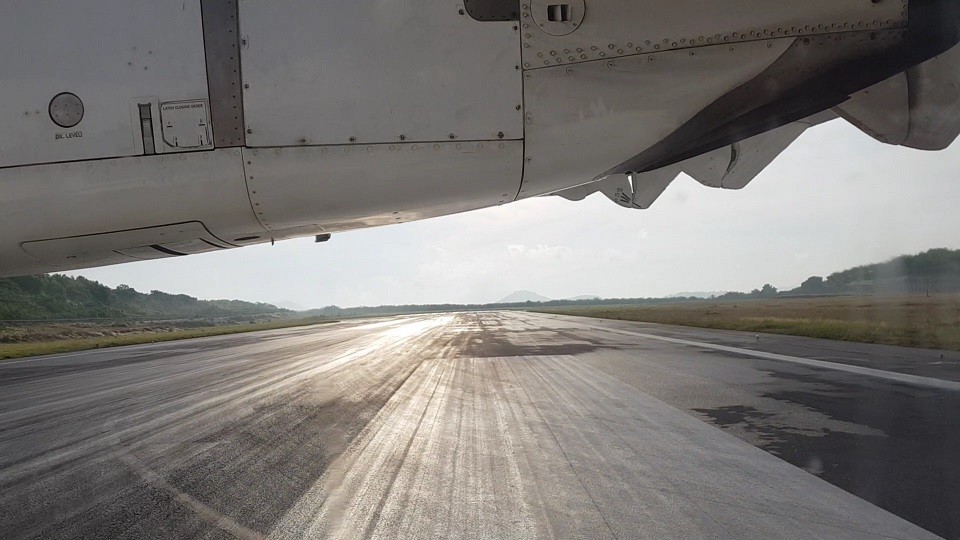 Less than a minute later, the Pratt & Whitney's were set to full power and we were off for a short hop to Hat yai with a view over Nai Yang Beach below. (In case you ever wanted to visit this beach be sure to approach it from the north ''Soi Mai Khao 6'', otherwise you'll need to pay a national park fee if you approach from the south which is about 5 euros for foreigners). 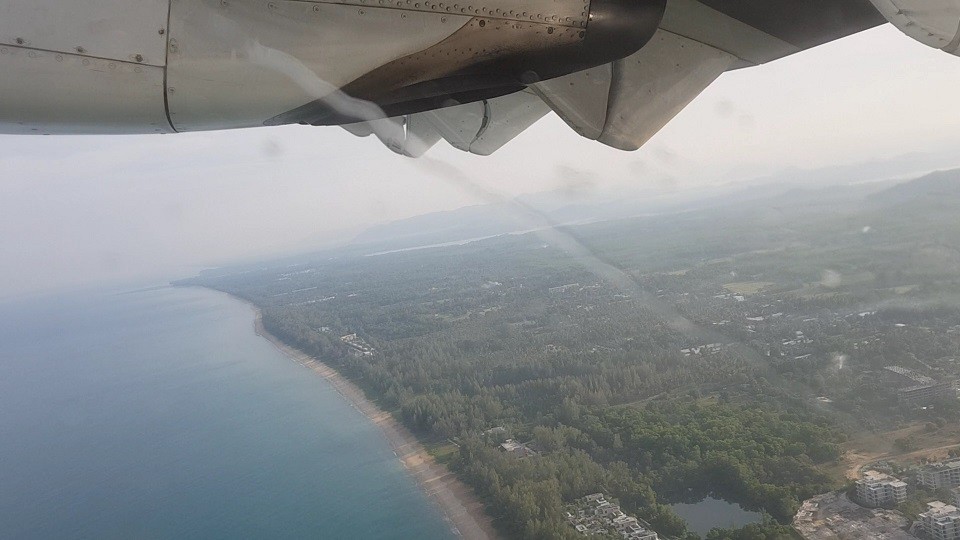 After reaching a safe altitude, the seat belt sign was turned off and the flight attendants jumped in action to prepare our meal service.

Only ten minutes later, the trolleys were moved forward and our meals were distributed. the main meal was a chicken curry sandwich with some macarons served as appetizer. Real cutlery was provided and some complimentary water. 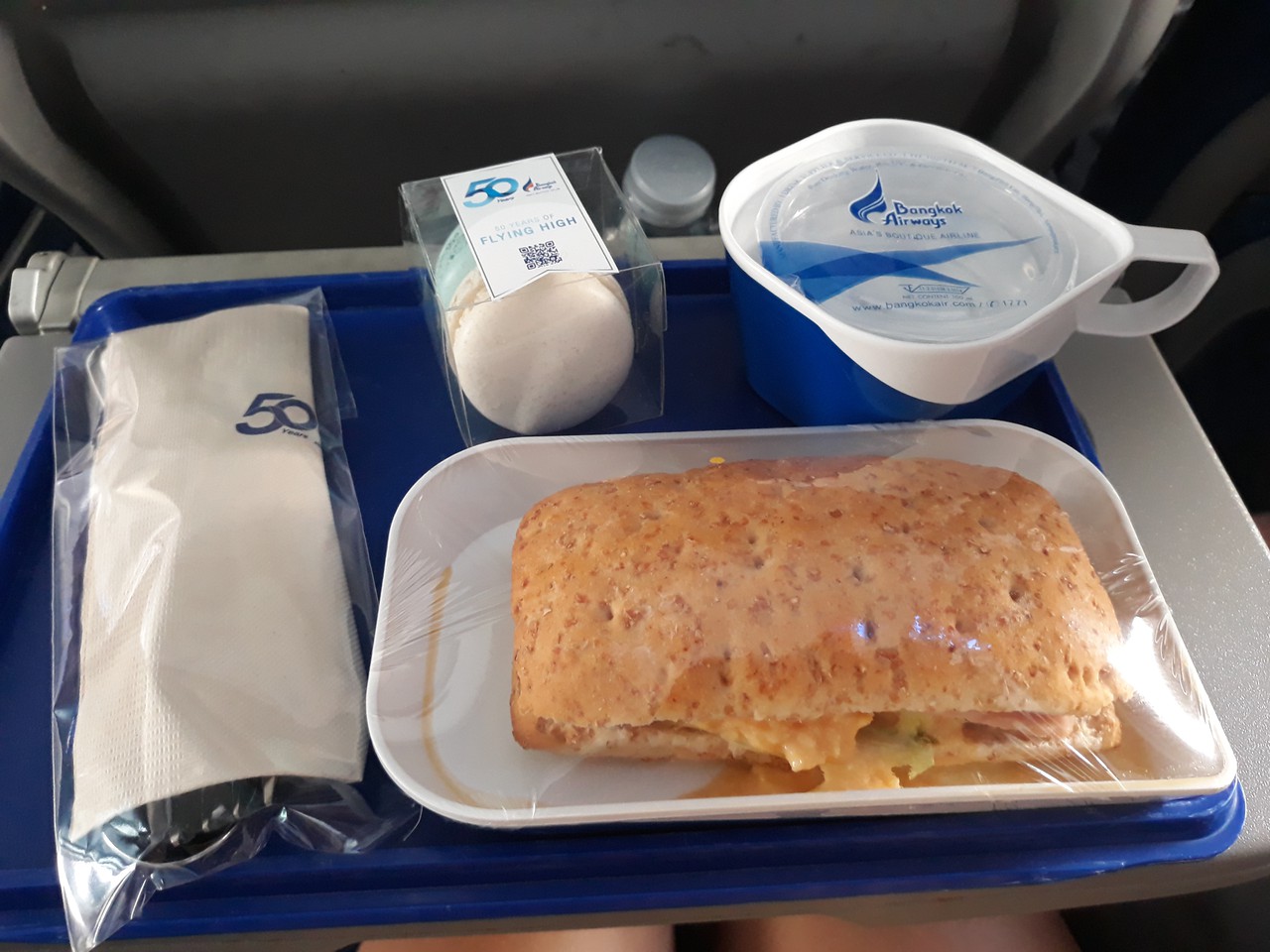 The meal itself was not impressive and very dry. The filling of the sandwich was good, however the bread itself was too dry and cold. The macarons itself were even dryer and I never understood why people love to eat those things….. Coffee and tea was served afterwards or some juices if you wanted to.

Our cruising level was 15.000 ft and we stayed there for a solid 30 minutes before our descend was initiated. 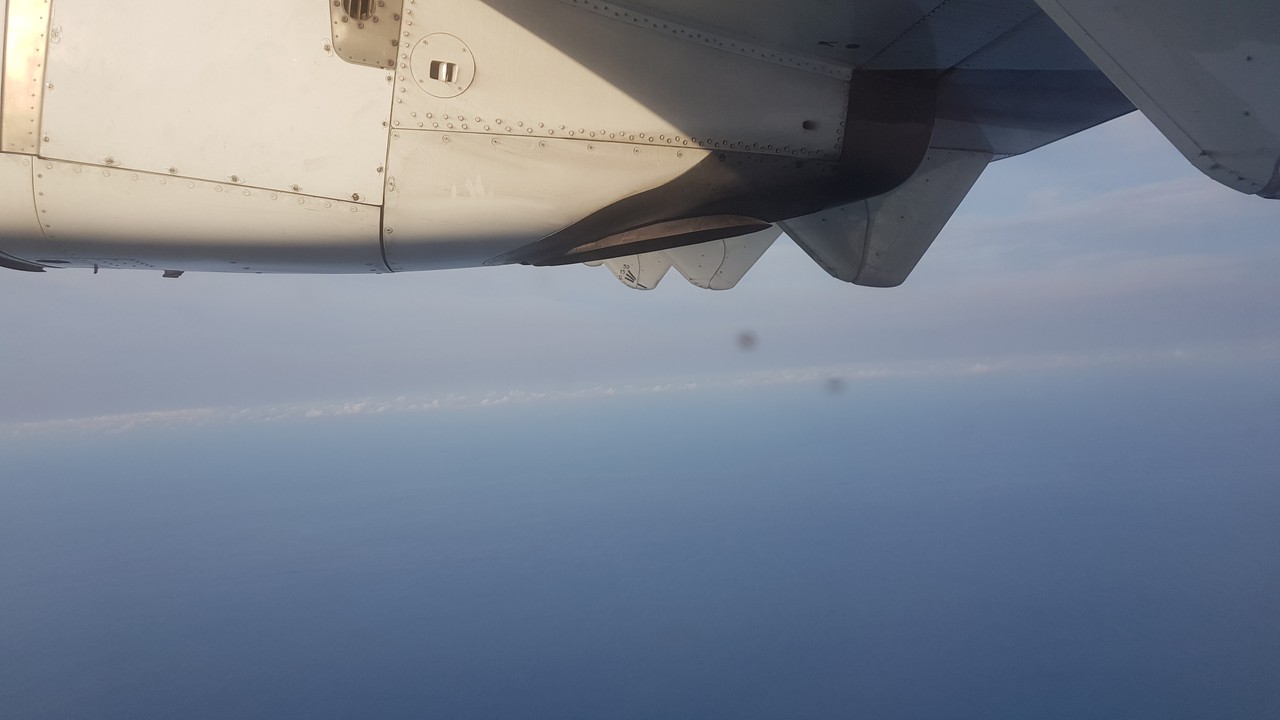 While the pilots previously reported to us that we would set up for a direct landing, a few minutes later announced once again that it will take longer as the airport had changed their active runway to 26. After a good 15 minute flight, we were now established on the final course to 26, which gave this beautiful view over a small mountain range with a small part of Hat Yai itself. 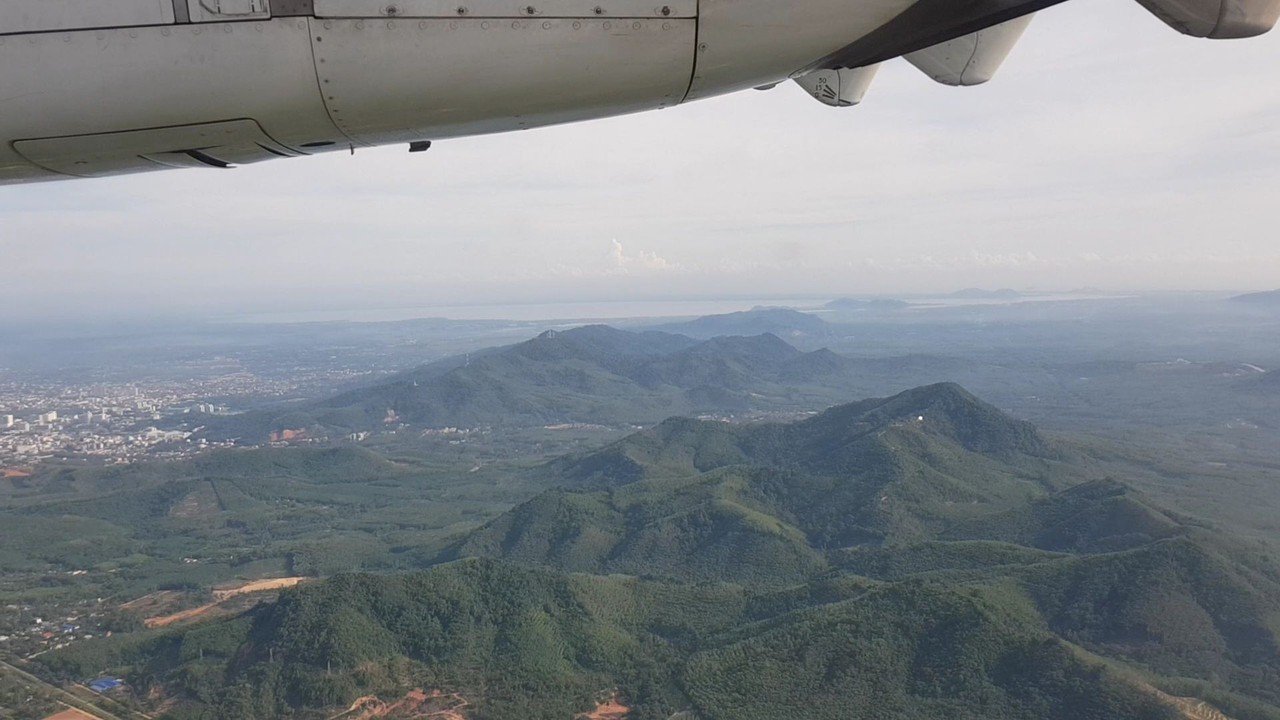 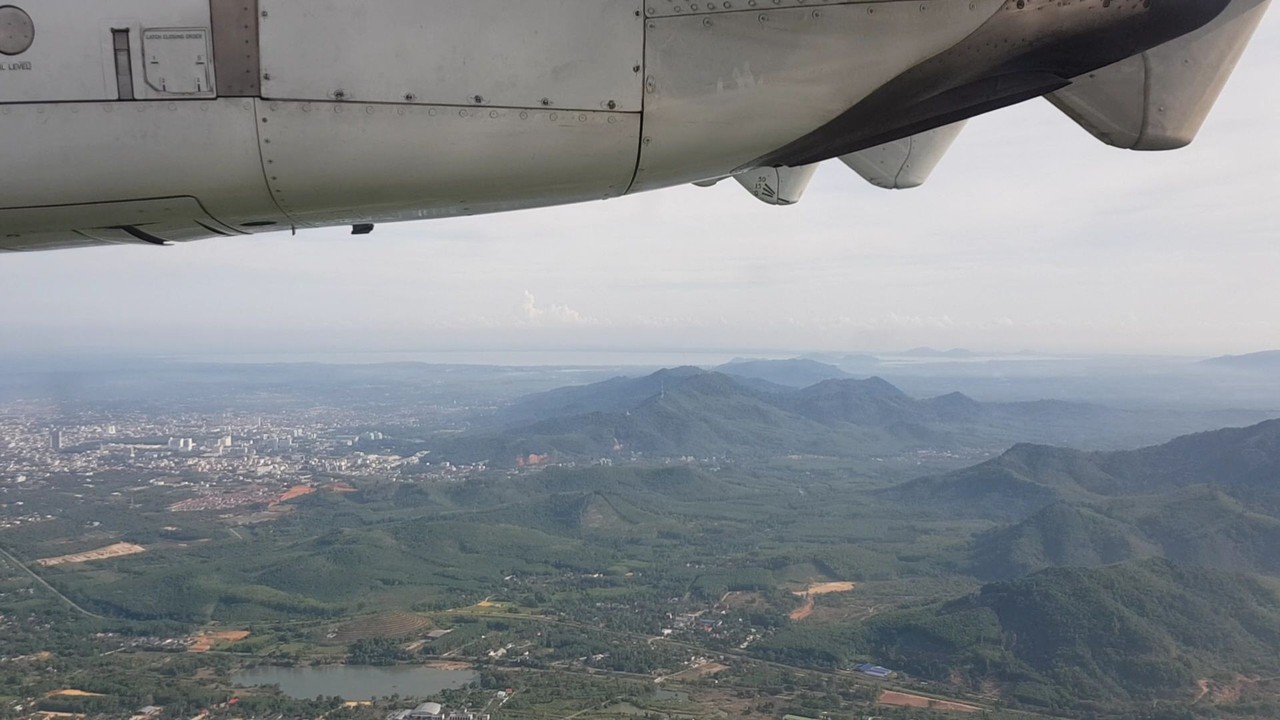 Short final with a lot of trees. 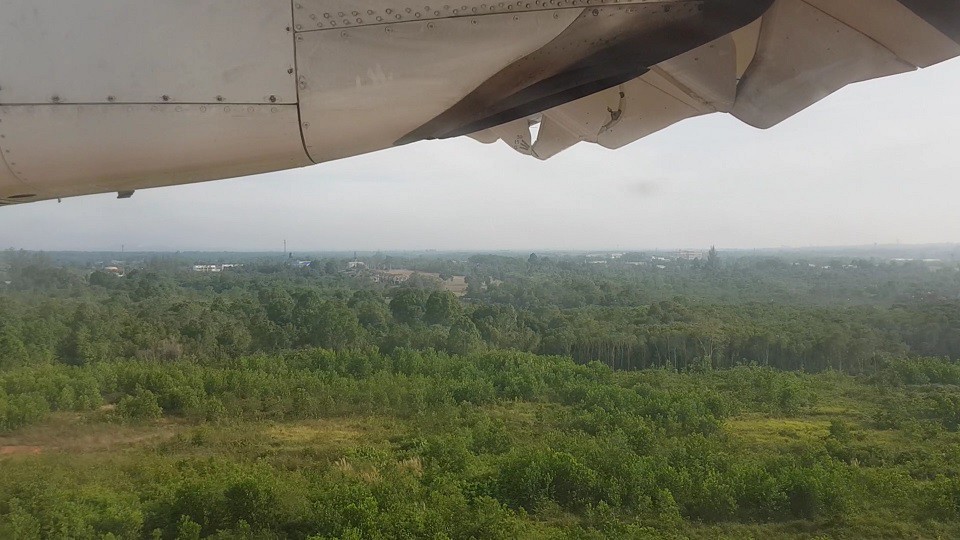 As I am a pilot myself, the moment the pilot idled his engines I knew it was going to be a very hard landing. We literally dropped down a meter and seconds later it was confirmed. Not very impressively done I must say, but it can happen from time to time. 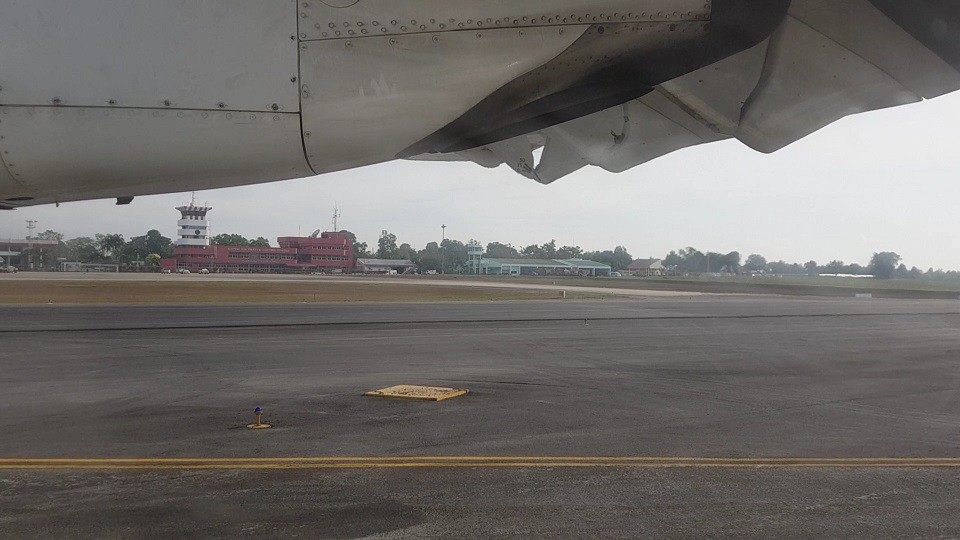 Shortly after landing, we were already at our remote stand and engines were shut down. 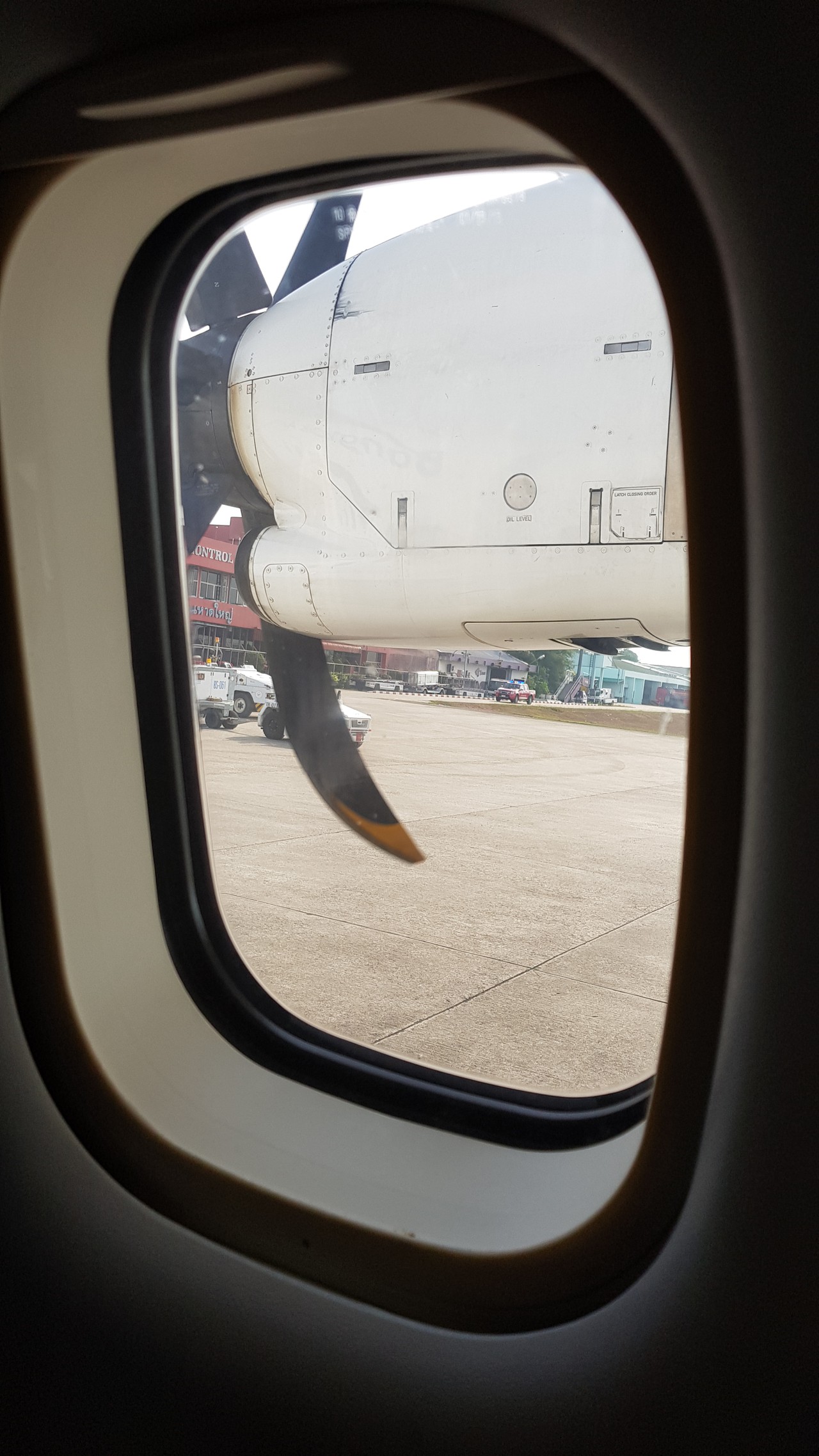 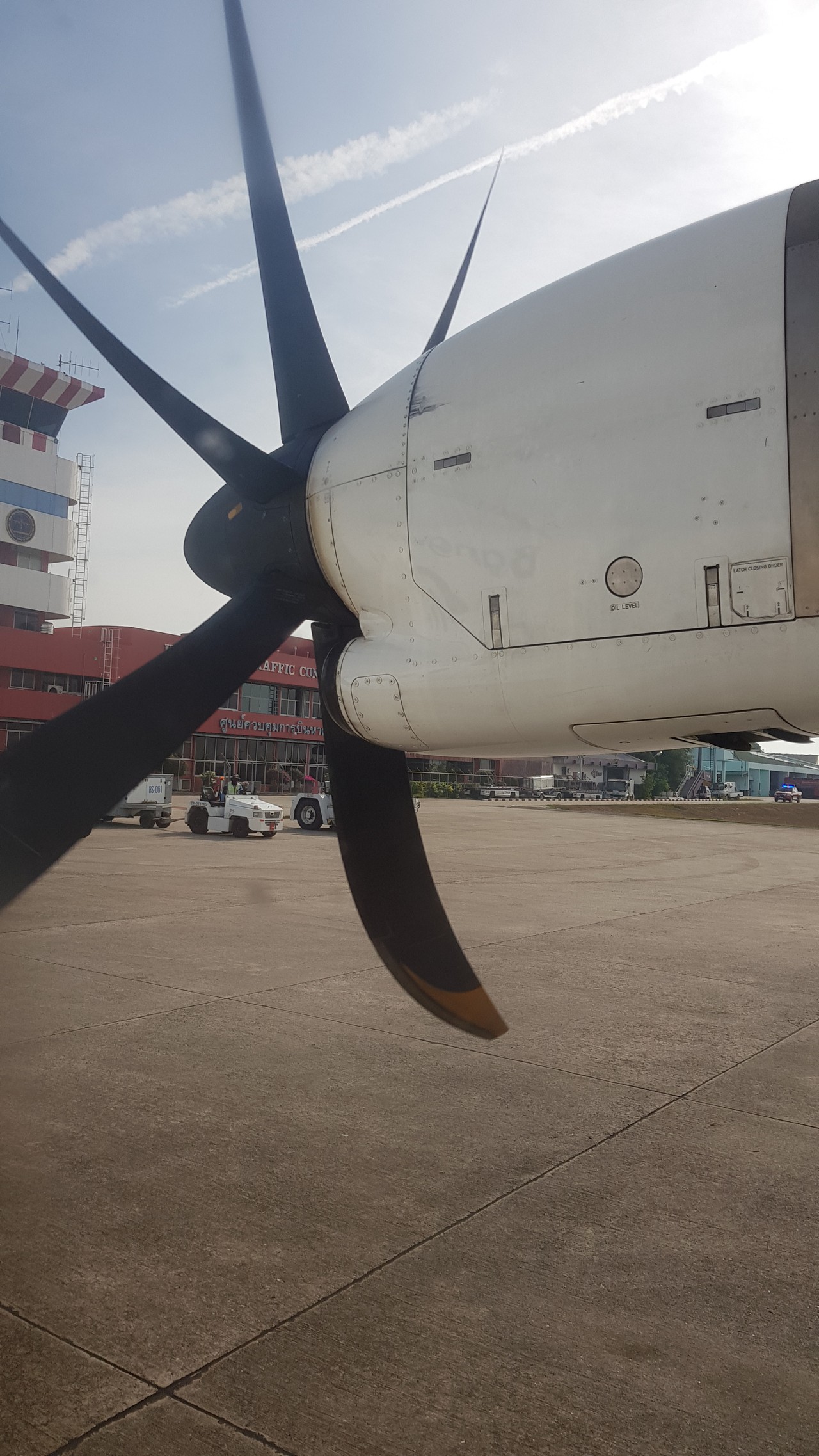 A few minutes later, we were ready to deboard with a short walk to the terminal and  it gave me one last look of the beautiful plane that brought us here. 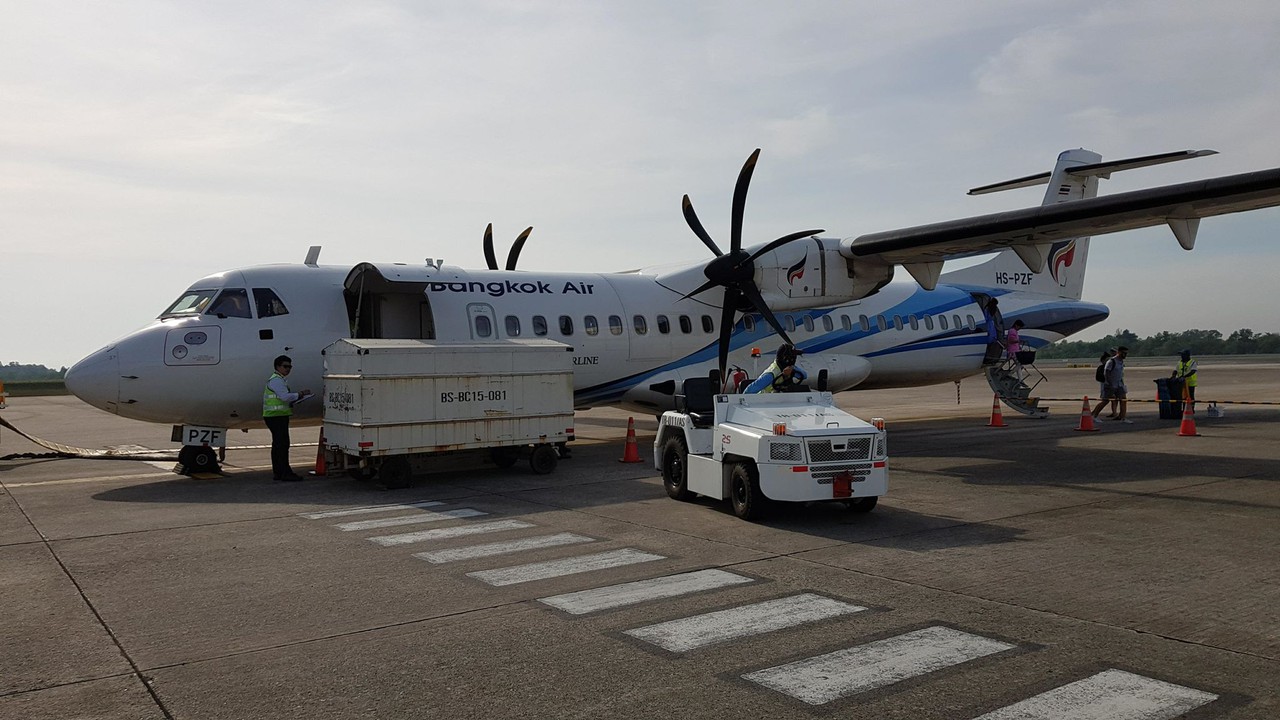 After a short walk to the terminal, it did not take more than a few minutes for our luggage to arrive on belt and we could continue our journey to Koh Lipe by minivan and speedboat.

Check my tourism bonus for some photos of Koh Lipe, which is known in Thailand as the Maldives of Thailand.

After a ride of two hours by minivan, we were now required to wait for another 30 minutes for a boat ride of two hours to Koh Lipe with some stops in-between to visit some smaller islands. It was already 4 pm by the time we checked in in our hotel, which was a very lovely resort.

We stayed in ''Lipe Beach Resort'' and opted for the SeaBreeze Premium Bungalow, which I personally thought was a better choice to stay in compared to the beach houses.

About a hour later, the sun was setting and the low tide of the sea made it able to explore the sea quite far. You can find little nemos in between the coral.

and of course the sunset gave us amazing views.

But the sea was so clear that you were able to see majestical creatures like this fish with legs.

The beach in the morning in front of our hotels

And time for us to do a snorkeling tour…. which the usual case where the bf ends up capturing tons of photos for his gf of her!

After many hours of snorkeling, it was now up to us to return to the beautiful island of Lipe.

And if you ever needed a taxiboat, this station would bring you quickly over.

A very enjoyable flight despite the very hard landing and the very dry food which was offered to us. The aircraft was clean, properly maintained with good legroom. The flight crew kept us up to date and the flight attendants were very professional and polite. It seems impossible for Bangkok Air (PG) to disappoint.