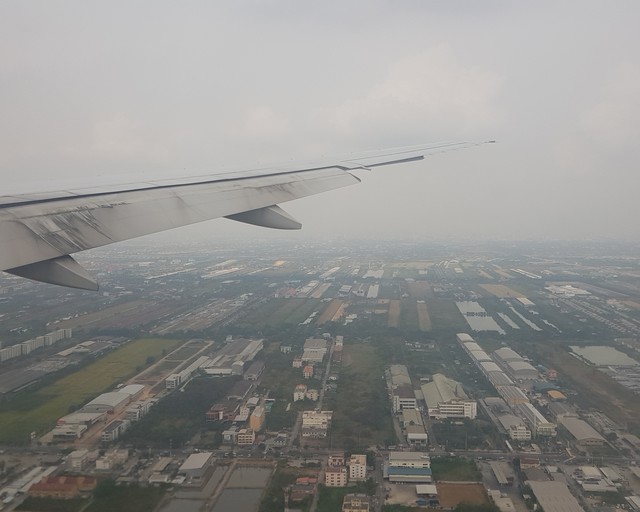 #46 out of 71 Airlines A minimum of 10 flight-reports within the past two years is required to appear in the rankings. 876 reviews

While my job was required to give me another week of holiday due to nearing my resting limitations, I was given a choice by them to take a week off right now or the last week of april. Knowing that end of april was going to be a period of national holidays in the Netherlands and I would be travelling again in May to Aruba with KLM for a wedding of my best friend, I opted to take off right now.

While I wanted to go to Thailand once again, I scanned the internet for a good hour to find a very cheap price with British Airways to Bangkok via London Heathrow. The timings were good, though I am not sure I would make my connection back to Amsterdam on my return leg as BA10's time reputation isn't the best over the past two weeks.

Check my routing below.

The journey of Ba 9

** Unfortunately when I transferred my pictures to my computer in order to complete my second leg of my journey towards Bangkok, most of my pictures corrupted and I was unable to restore them in their full size. So my apologies when some of my photos are in a poor condition

After the deplaning of our plane arriving from Amsterdam, we were now given a choice to enter the UK or to connect through by terminal. In case you are not aware of what terminal your flight is departing from, you always could check one of these monitors. A nice addition though.

Unlike Amsterdam (only need to pass security if you are arriving from a country deemed unsatisfactory in terms of security to European standards), you are required to pass security in London for any connecting flight. It wasn't busy at all and took about five minutes to clear.

I decided to head down to the A gates section where I grabbed a coffee and spend some time on creating a trip report on my first flight of this journey towards Amsterdam as my gate would only be shown about an hour and 15 minutes prior to departure. While I am unfamiliar with LHR myself (Been only in LHR once in my life like 5-6 years ago which was in T3), I was at that time not aware that terminal 5 consisted of three buildings. Though my fault as I did not really pay attention to that.

Around 14:00 I finally knew my gate and realized that T5 consists of 3 different buildings indeed. I wasn't aware of the trick Istflyer told me too that you could know your gate beforehand when you are visiting one of the lounges entries. Ah well no worries. Let's proceed to our shuttle train to bring us to T5C as our flight would depart from gate C57.

I joined one of the wagons who was about to depart and was rather crowded. The ride itself took no more than a few minutes to T5C.

While T5A was completely crowded, T5C however offered tons of seats with no crowds at all. Yes I have been told the reason, yet I can't understand their reason to not inform us about our gate much sooner.

Boarding was called on time in group stages and went orderly again. UK and US newspapers were offered in the jet bridge. Upon entering the aircraft, I was warmly greeted by one of their flight attendant who reminded me of Ron Weasley in Harry Potter with his looks. The aircraft, unlike many other European carriers, was still operated in a 3-3-3 configuration. While the cabin was very comfortable, it showed clear signs of age with some tray tables, head rests and luggage compartments. A funny part was that a big Thai family was seated next in our compartment and their guide was rearranging seats to them and other passengers like he was part of BA..

The legroom was good to generous and the seat width was excellent, though I must admit that I have never seen such a poor IFE system in a B777 ever before ….. Even KLM's IFE system in their B747 was better. The IFE system however was touchscreen and a fixed remote was build in in your arm rest, though I barely used it anyway as the offer of movies was very limited and the route map was shaking so heavily that it was barely usable either. The seat had no power socket or usb plugs either to charge any of your devices.

A pillow, blanket and earplugs are awaiting you for your seat and to my luck I had a full row for myself once again to take a nap. 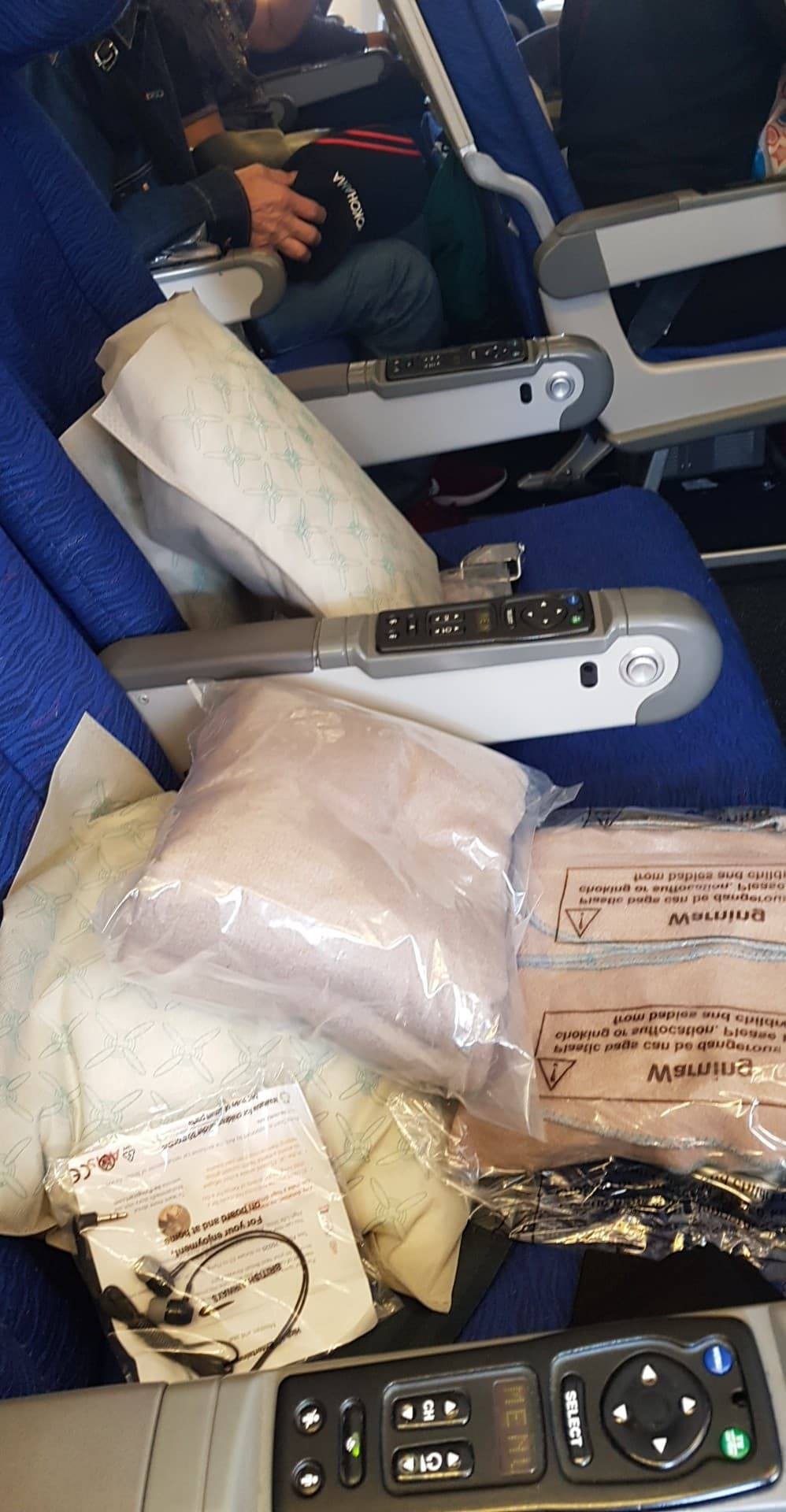 The captain checked in with us informing us about our delayed arrival in Bangkok due to the closure of the Indian & Pakistan airspace and that our flight would be around 12 hours long. In case Pakistan and India do not open their airspace within a week, I am pretty sure I would miss my connection on our return flight.

Push back was initiated two minutes ahead of our departure time and we moved at a very very slow pace to our RWY.

About 15 minutes later, we were now next in line for our departure to Bangkok. 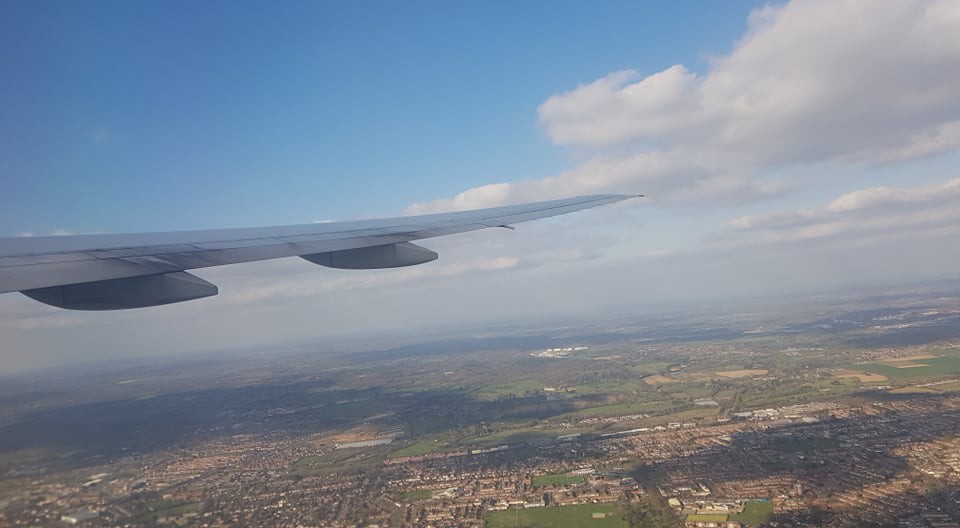 about 60 minutes into flight, the flight attendants came around to serve us a complimentary drink and some pretzels. I was surprised that BA was serving Tiger from LHR to be honest.

After another half an hour, it was time for our meal to be served and we had choice between Fried Rice with Chicken or Pasta with minced meat. I opted for the fried rice with Chicken. It was served together with some fresh salad, a bread roll, some BBQ'd nuts, bottle of water and a Mango & Passion Fruit Posset as Appetizer.  The meal in general was very enjoyable and I really liked that posset, though the main meal was a bit disappointing in terms of quantity of chicken as I had only one small piece of chicken (bitesize) in that curry…

While the flight attendants were a bit slow in cleaning our tables, they did however do a superb job throughout the flight to keep us satisfied.

Today's flight path would take us over turkey, Iran and in order to bypass the Pakistani/Indian border, we were re-routed to the south to skip Pakistan. The flight itself was over an hour longer and quite bumpy, which resulted in several wake up calls when I snoozed off by the flight attendants to fasten my seatbelt.

About four hours to landing, I decided to wake up to adjust myself to the local time in Thailand and some ice cream was served to us.

And with about three hours to spare, the sun was rising and gave us a spectacular view, though Flight attendants asked us whether we could close the blinds for our fellow passengers.

About 90 minutes to landing, the cabin lights were turned on to serve us our breakfast. Today's choice would be a full English breakfast or a frittata. I chose for the Frittata which was served with baked beans, mushroom and a single tomato as main, which tasted decently. It was also served with some orange juice, which was very sour.., some pineapple slices and a Raisin Roll.

About 40 minutes to landing, the Captain checked in with us again to report that we would start our descent in Bangkok in about twenty minutes. Gave us the latest weather update and thanked us for flying with British Airways. 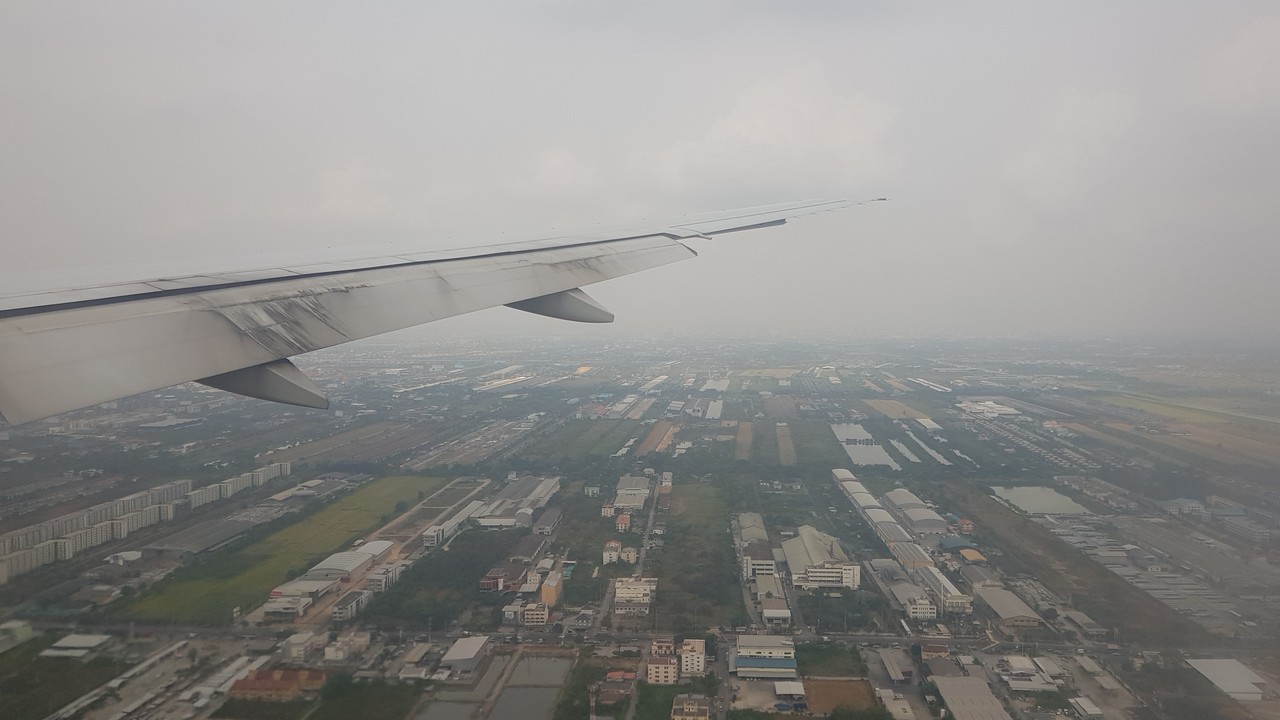 After a very smooth landing, we quickly taxied to our gate. Deplaning of our plane was done in no time and we were off to border control, which took no more than five to ten minutes to clear.

Clearing border controll, the first batch of bags was already on belt and it took only five more minutes for my bag to appear on belt.

While I am not a fan of using BA on short haul routes within Europe due to their service and poor legroom, I thoroughly enjoyed them on their long haul flight. Cabin crew did enjoy their job and did their best to keep us satisfied throughout the flight. The aircraft was an old bird in a pleasant 3-3-3 configuration with generous legroom, however the IFE system on board was very poor and a disgrace. The route map was shaking so heavily that it was unusable.

The contributors of Flight-Report published 6 reviews of 3 airlines on the route London (LHR) → Bangkok (BKK).

The average flight time is 13 hours and 32 minutes.