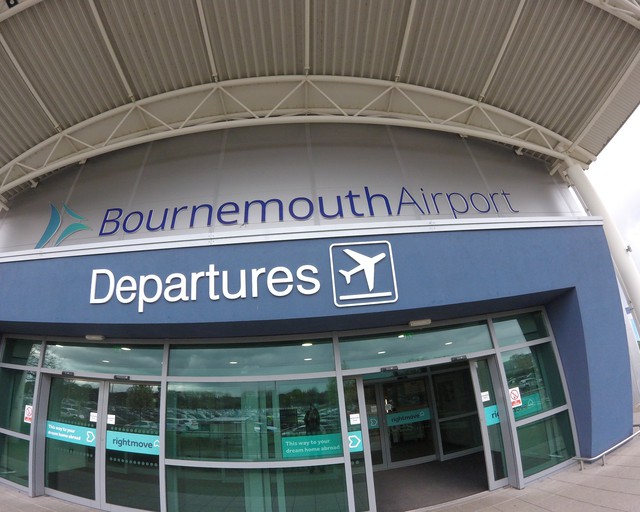 #10 out of 11 Low-cost airlines A minimum of 10 flight-reports within the past two years is required to appear in the rankings. 323 reviews

Dublin was served by Ryanair during the 1990s by Ryanair, however come 2010, the route was dropped. Short lived attempts by Aer Lingus Regional and Flybe quickly faded away, but in late 2018- Ryanair (also coinciding Bournemouth Hurn becoming part of City and Regional Airports collection and their plans to expand) announced that Dublin would be relaunched from their BOH operations alongside a new service in the form of Prague. The airline has regularly offered "Bucket and Spade" routes from BOH over the years including: Malaga, Malta, Tenerife, Faro and Alicante. The new(ish) service currently runs 4x a week (Tues/Thurs/Sat/Sun).

Bournemouth Hurn is a very quiet airport in the South of England. TUIuk is the only other airline offering regular year around services (which only cover holiday destinations) and in the winter easyJet offers a Geneva service. Loganair recently launched services to the Channel Islands. 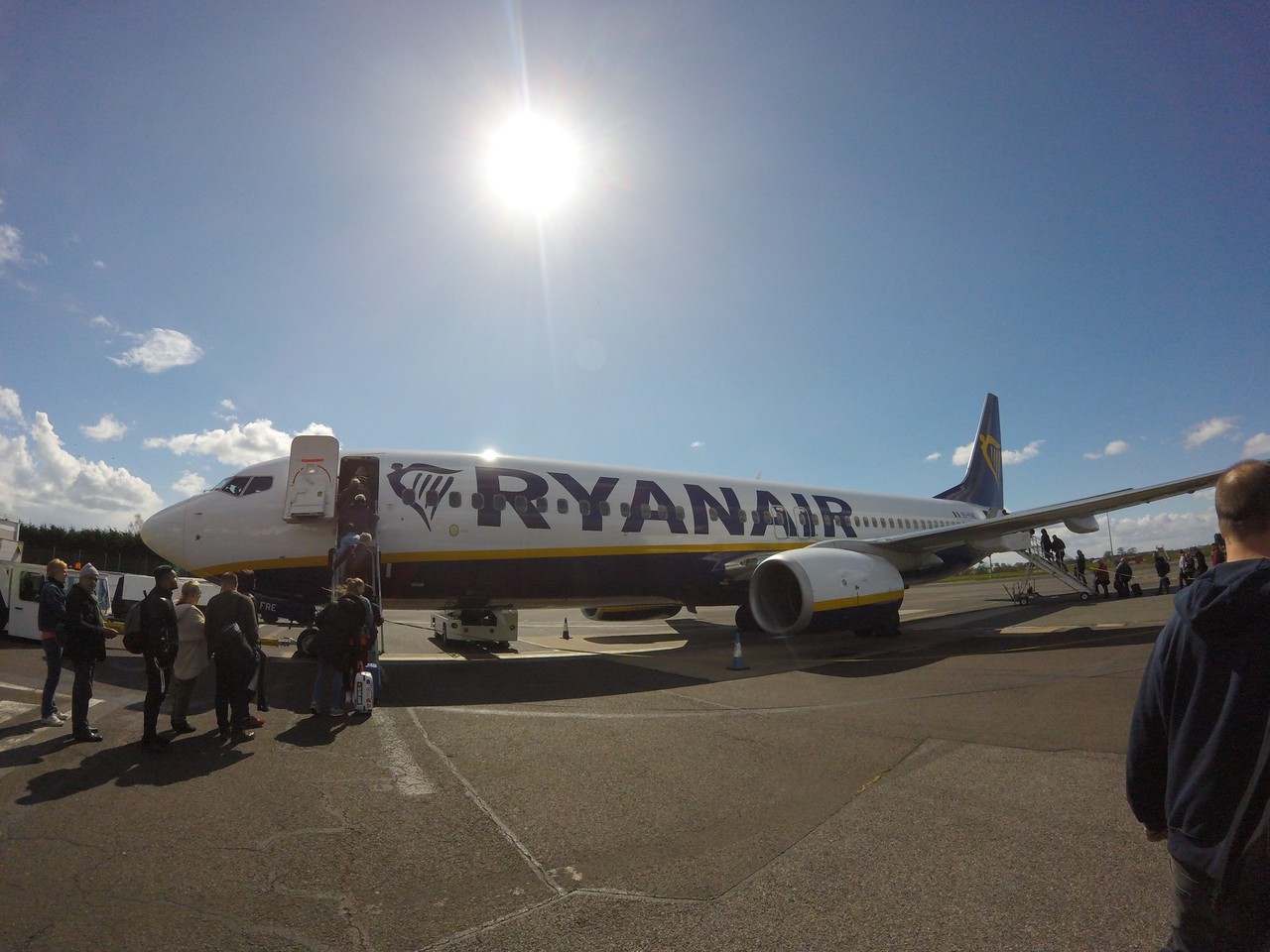 Bournemouth Hurn was a former British Aircraft Corporation (BAC) construction site and one of the best known British airliners was built mainly at BOH during the 1960s/1970s- the BAC 1-11. Even Ryanair once operated a fleet of these in the late 1980s and early 1990s before Michael O'Leary later streamlined the airlines fleet to the Boeing 737-200/800. 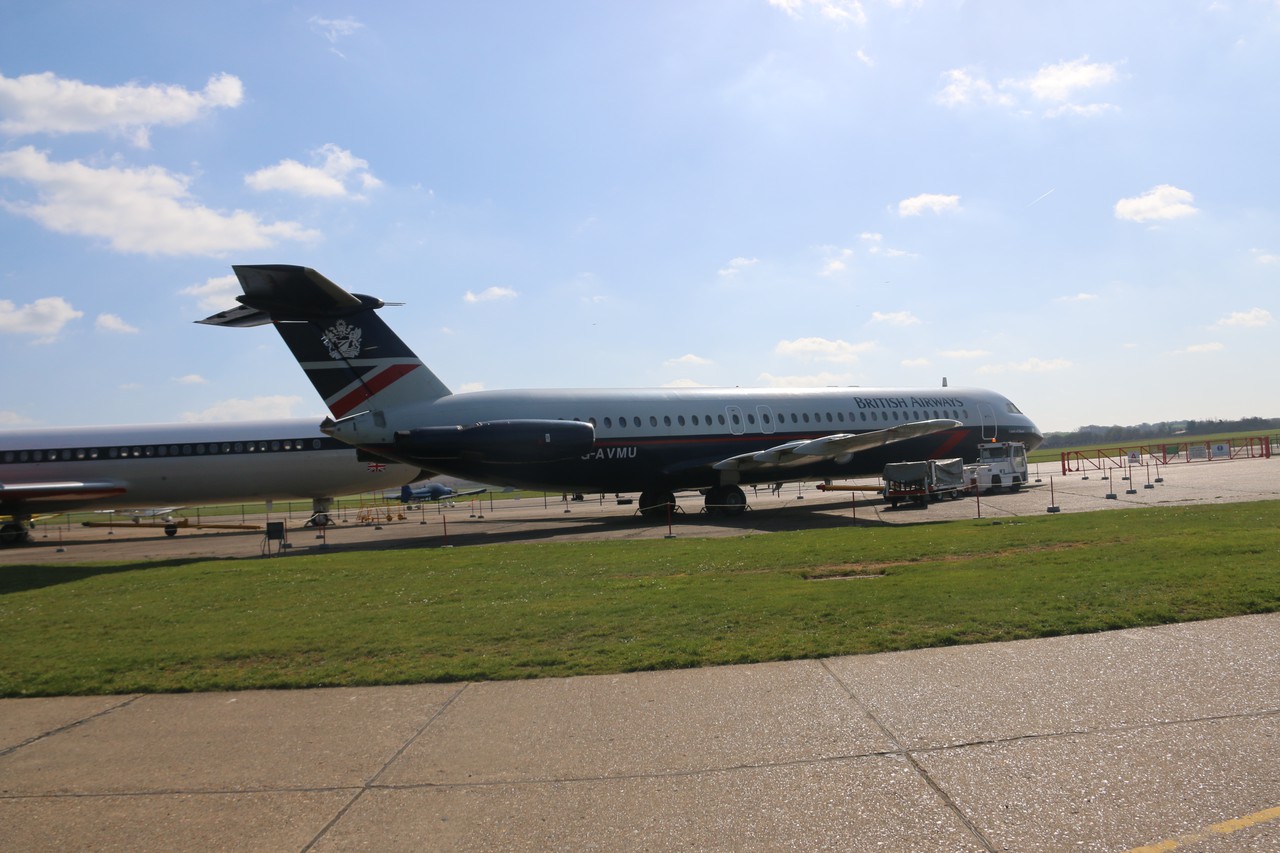 Back to the review, I arrived at BOH about 90 minutes ahead of the departure time and entered the modern Terminal complex that was built in the late 2000's (just before the 2008 recession hit). The airport has a cafe and WH Smith in the landside departure area and a check in and bag drop area. Ryanair unsurprisingly takes up the most room! 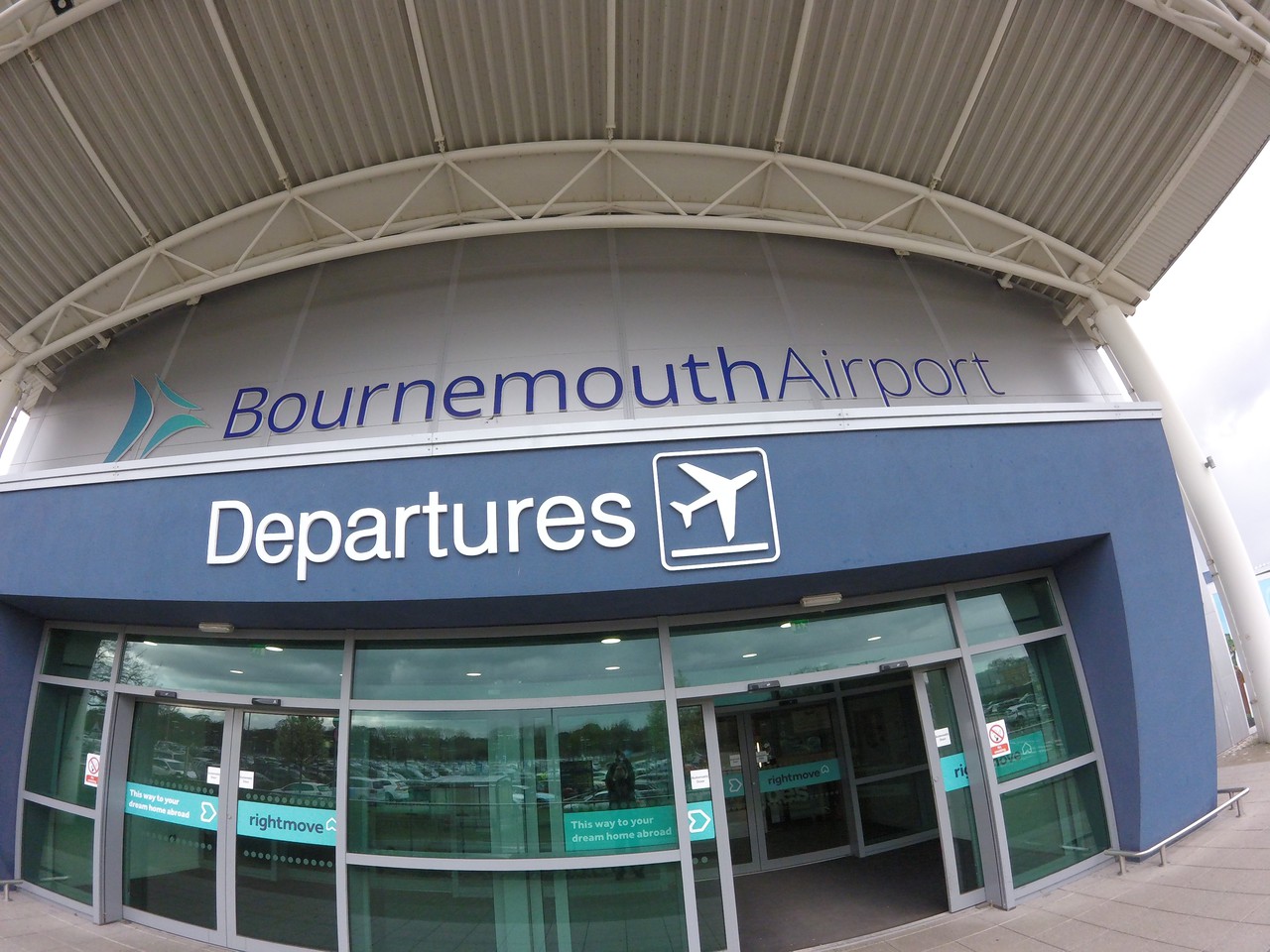 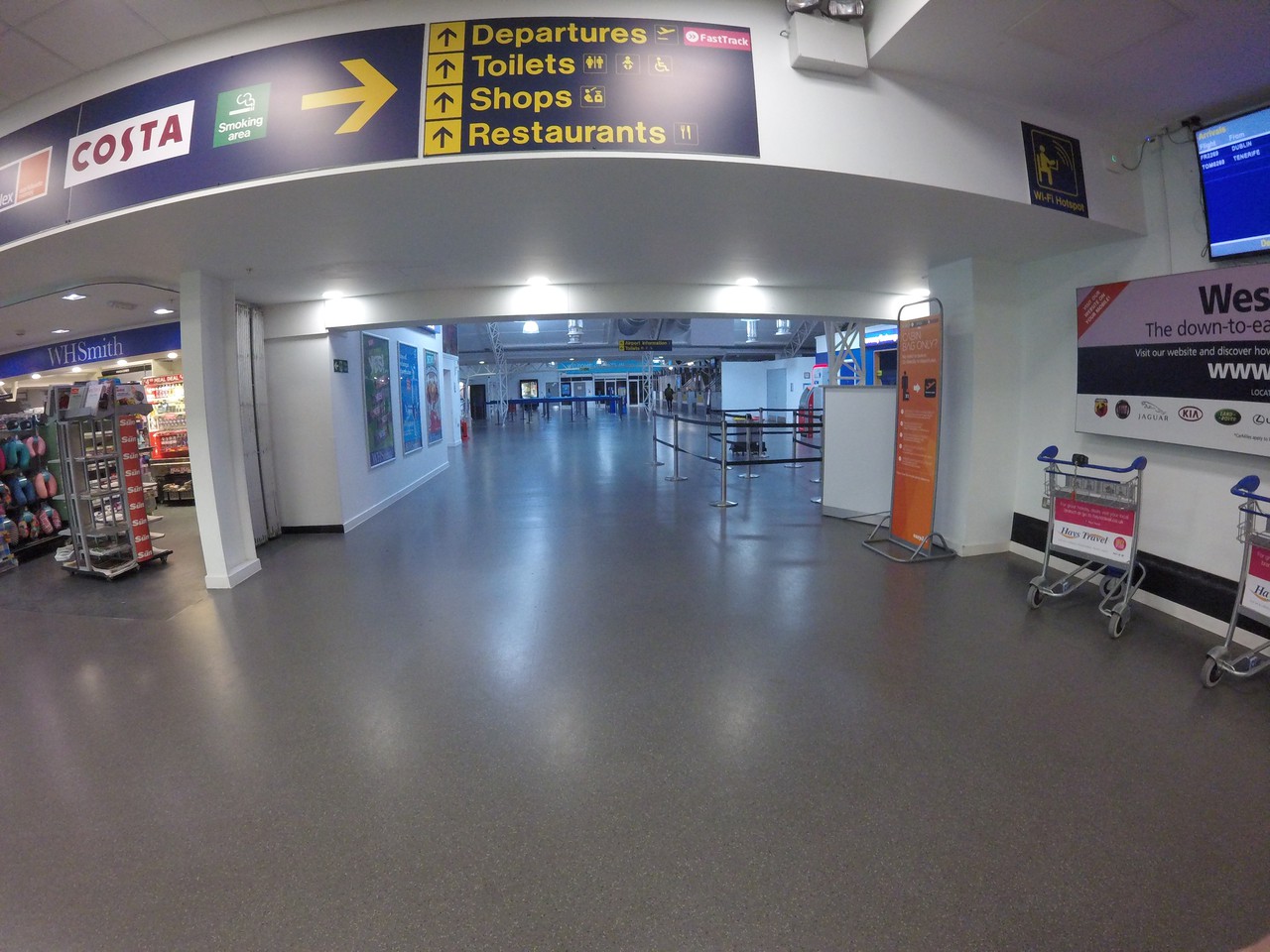 Going air side (through a small duty free section), me and my dad (who also couldn't resist 2 days in Dublin for £45) went to the air side bar and restaurant "THE NAVIGATOR" for a pre-flight lunch. The main reason behind this is the FLIO app I use, it provided me 15% off a meal at the aforementioned bar. So I enjoyed a cheese and ham toastie (Croquet Monsieur if you want to be upmarket) with chips and a cola for £8.50 after discount. I enjoyed it especially as our flight was going to be at least half hour late in from Dublin. Courtesy of its last trip to Munich Airport. 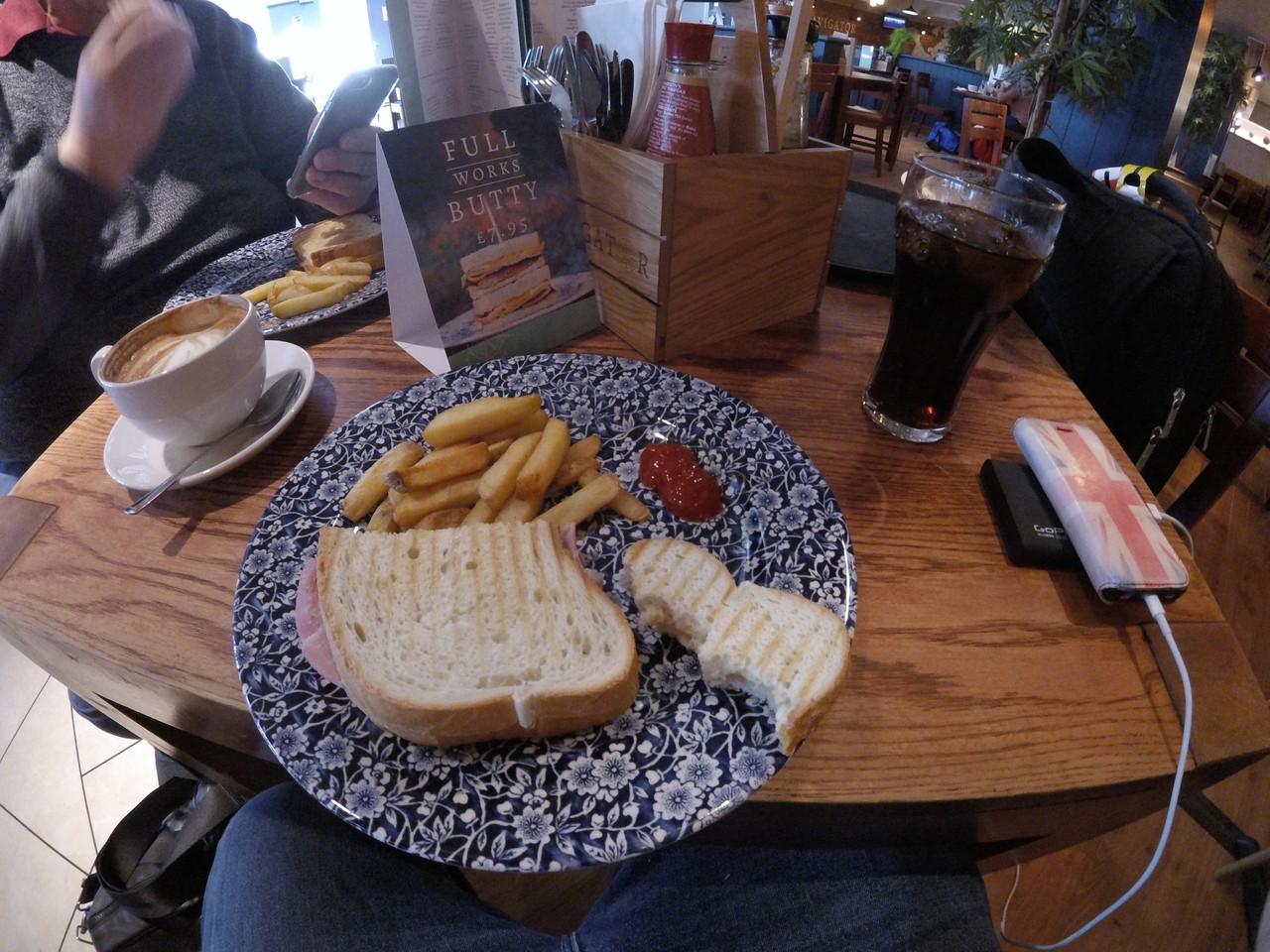 Our Ryanair Boeing 737-8AS(WL) finally arrived and parked up. It was turned out to be a young air frame EI-FRE, which had the brand new "Boeing Sky Interior" and the slimline Ryanair "Lego" seats. Once the cabin crew finished posing by the plane with cards for a photographer to be used in media printings, we all began to board on this bright sunny day. I personally enjoy an open boarding, great picture opportunity! 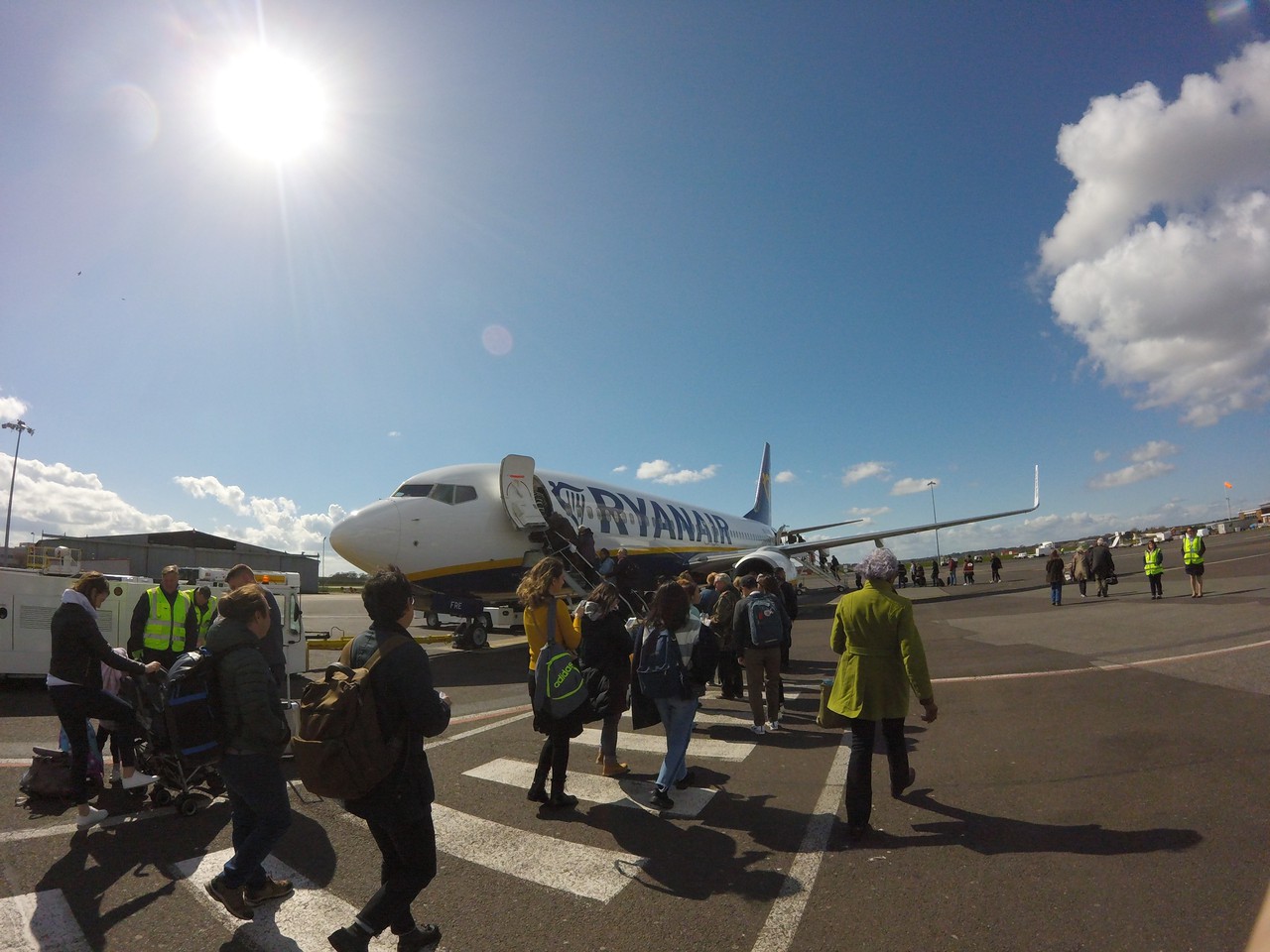 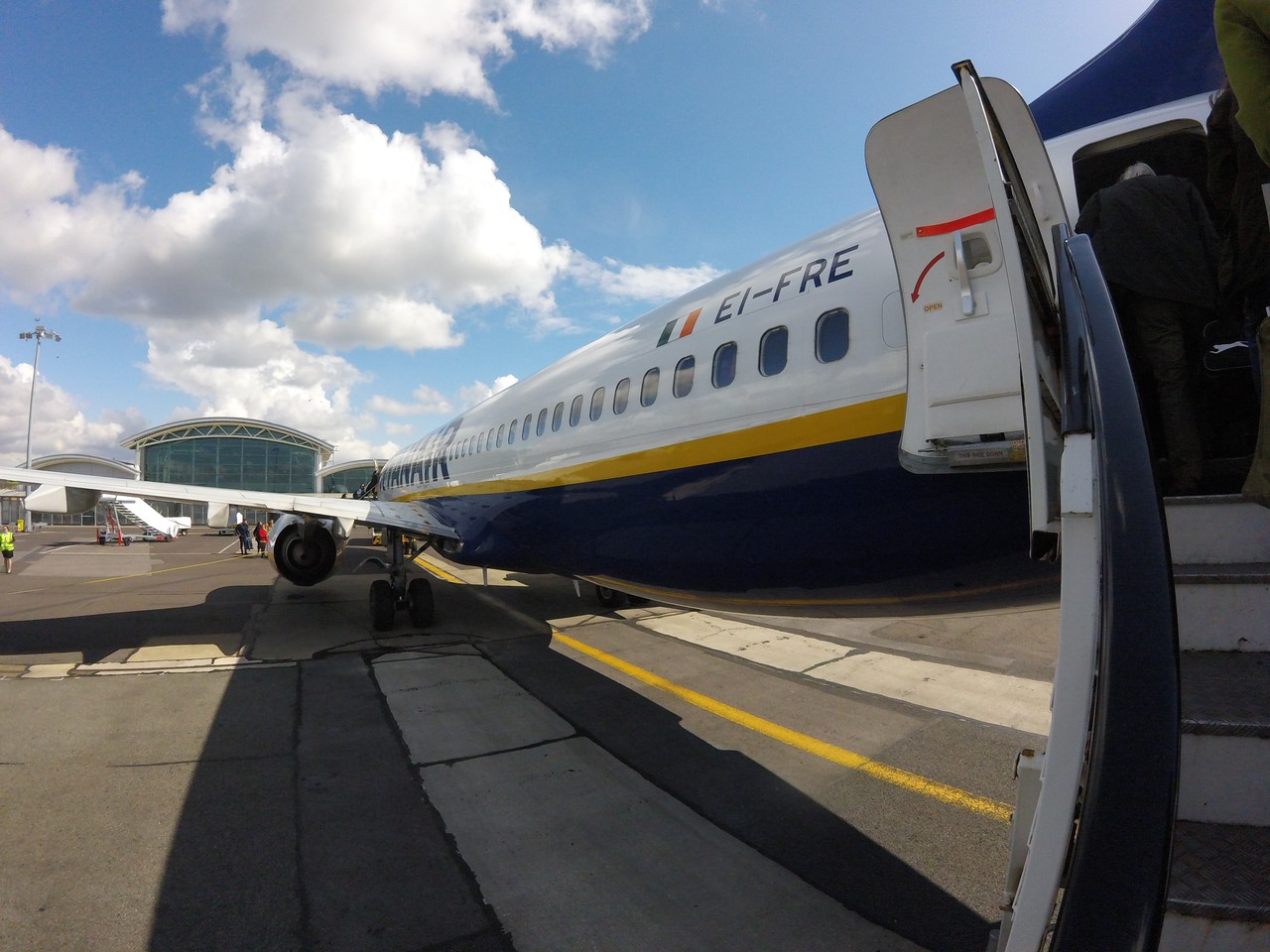 Getting on the Boeing 737-800, I sat just behind the wing, at Row 25, Seat A. Giving me a view of the wing and a nice open view of the scenery around me. A good opportunity for some decent footage! I find the older seats for comfortable than the new ones, but the new ones definitely have better room. So for me the old vs new seats is certainly losing "Ying" for "Yang". 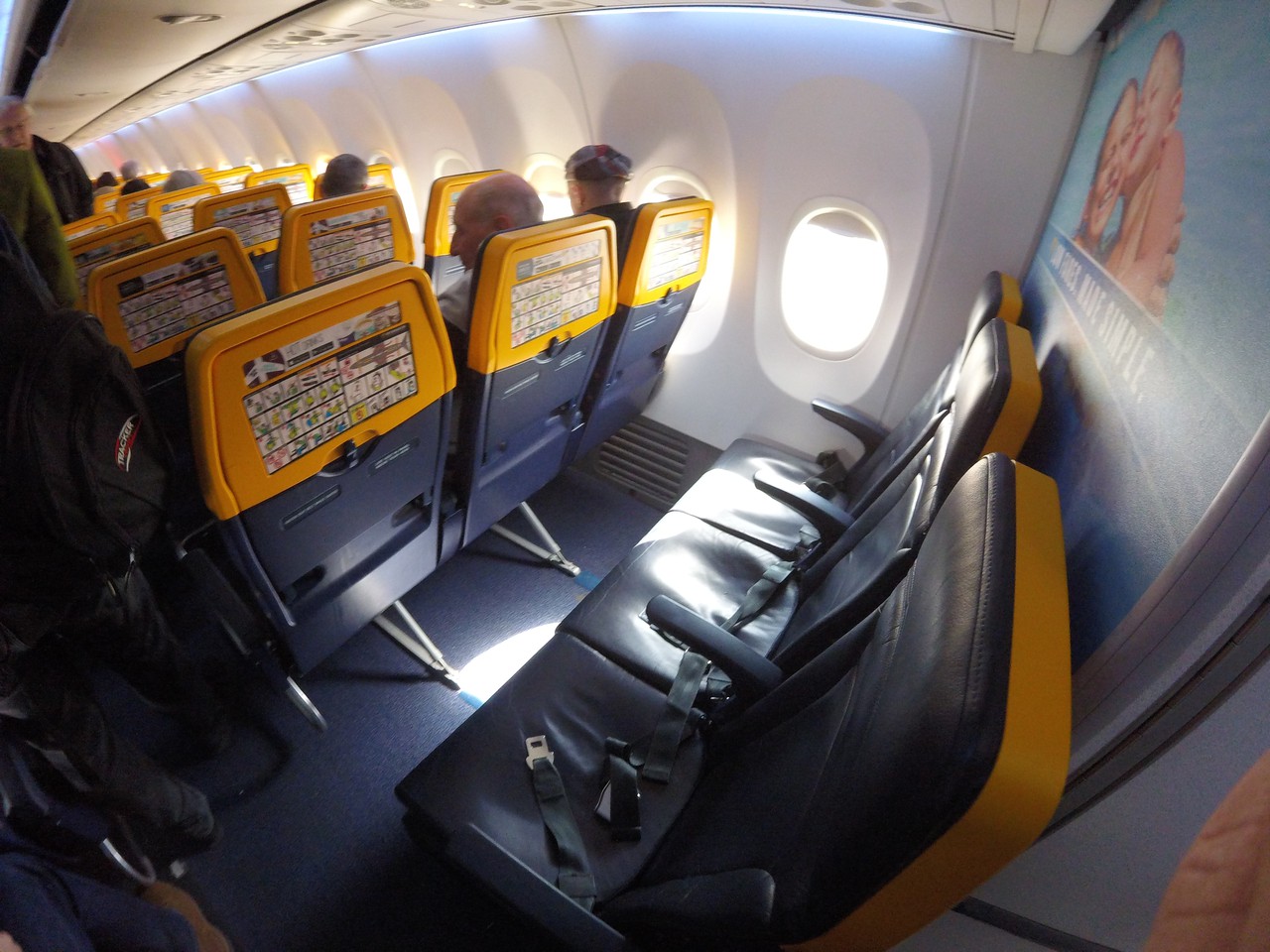 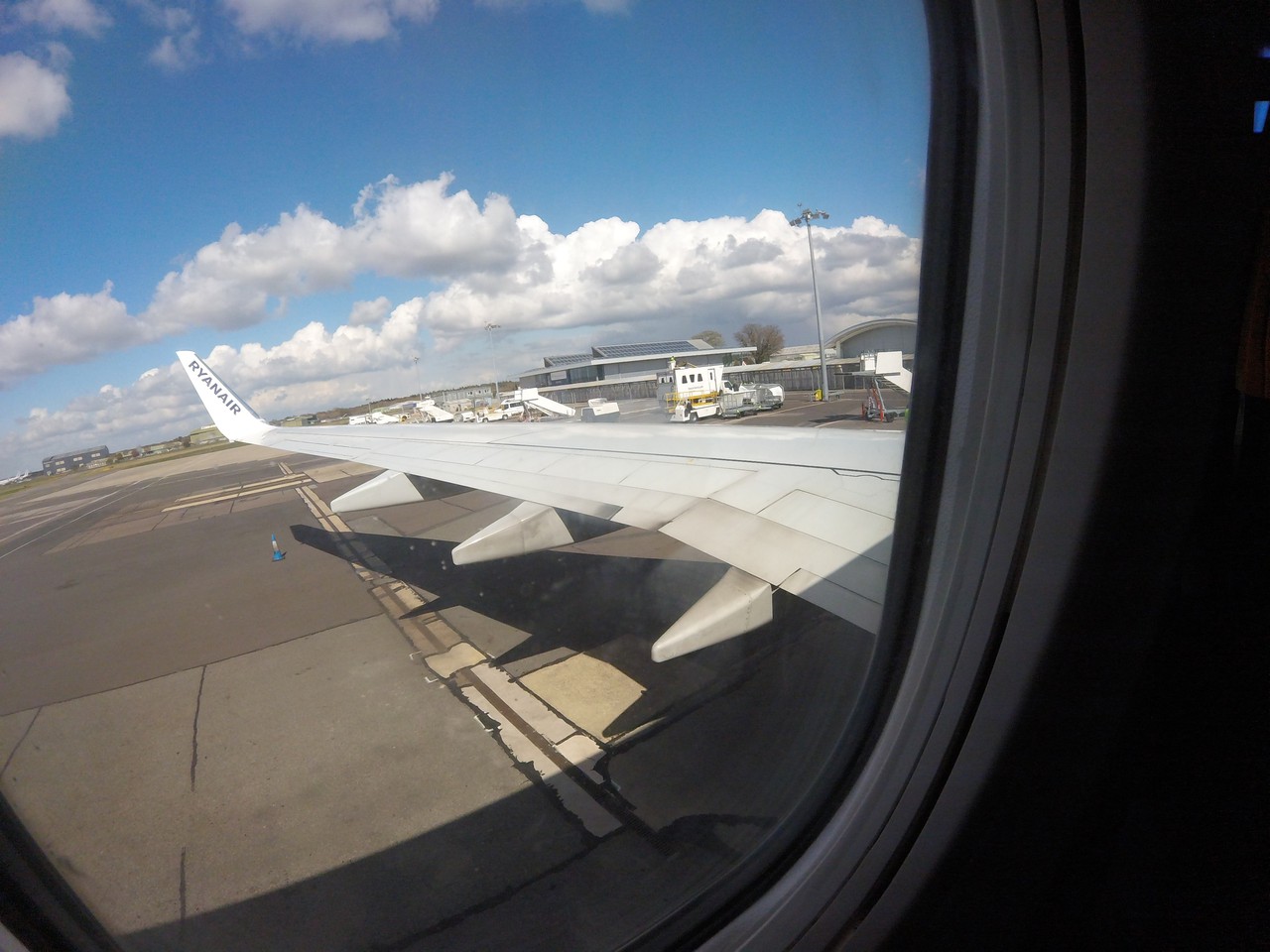 We pushed back as soon as it was possible to and given how quiet the airport is, we were taxied, lined up and out of BOH in less than 15 minutes to make up time on our delay. The lovely spring afternoon gave quite nice views of the English country side as we left Dorset, flew towards Bristol and Southern Wales, heading towards the Irish sea. 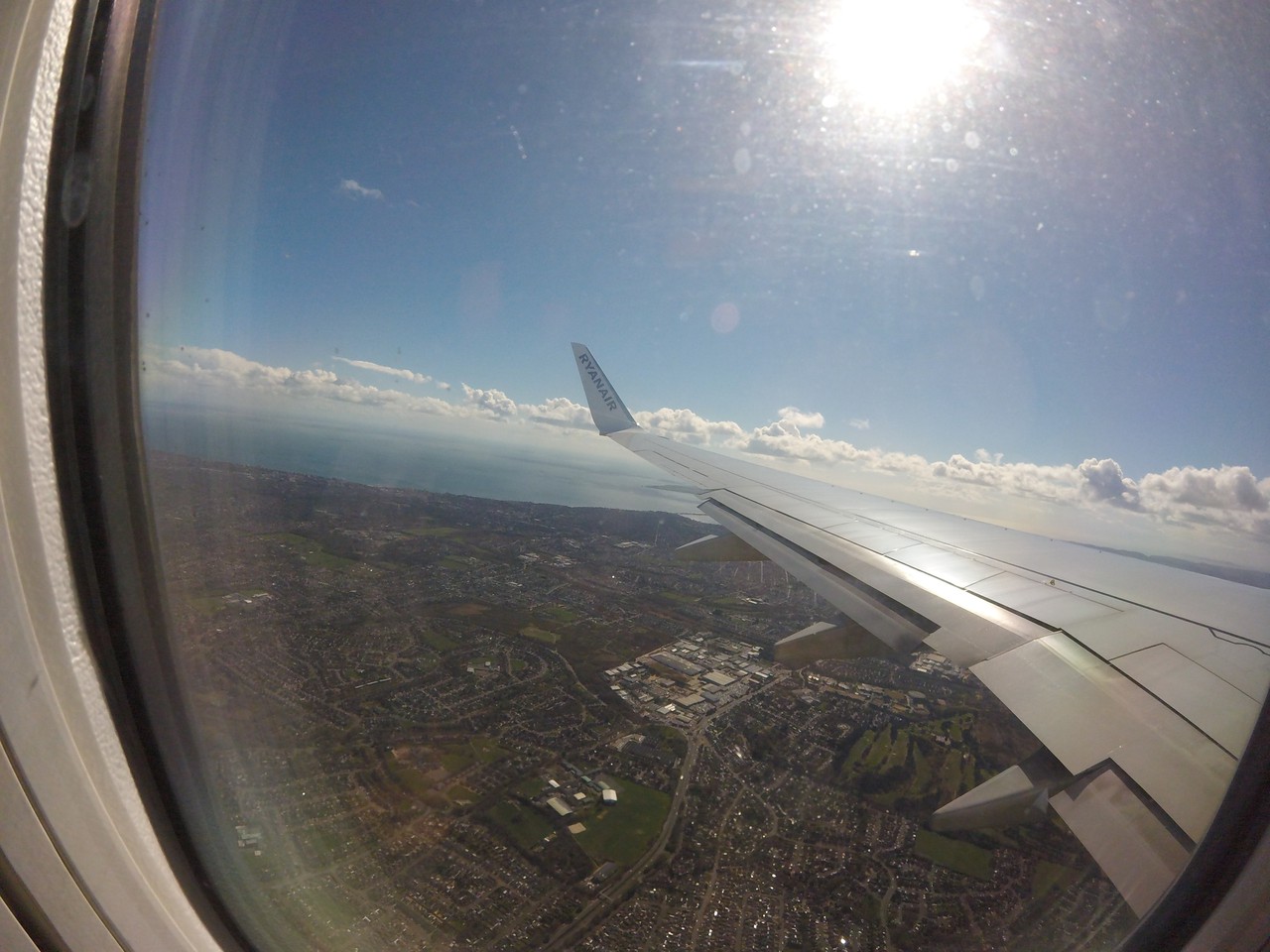 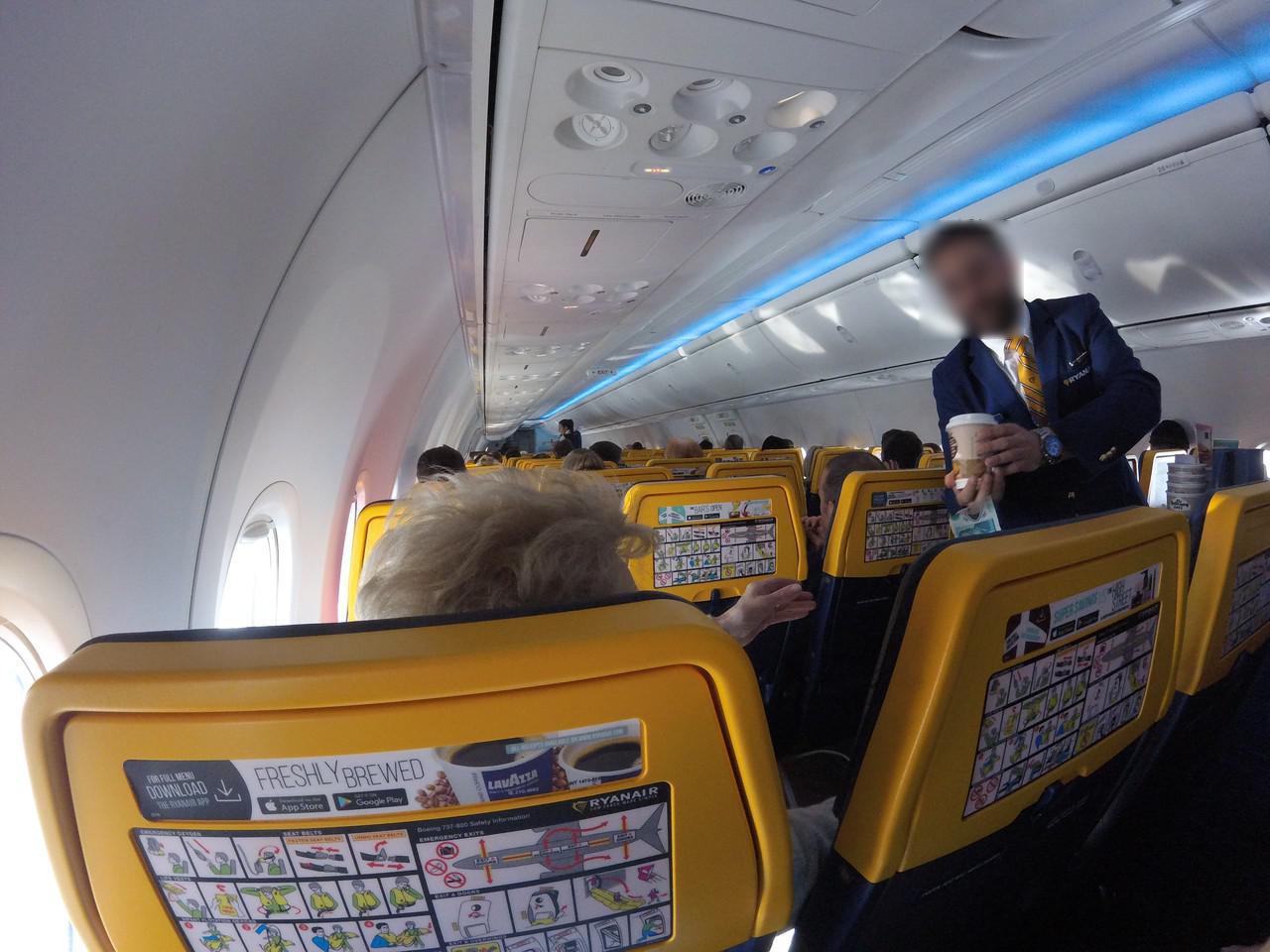 This was my first time flying with Ryanair since November 2017 (when I went on a day trip to Oslo for £10), I remembered the 10EUR (£8.40) meal deal and went to it to see what Ryanair had introduced since my last flight 2 years ago. I went on a hiatus of using this airline for two reasons;
1. I had done 20 flights in 2 years and with Ryanair having only 1 aircraft type, I didn't want to bore myself
2. It was an excuse to look at flying other airlines I hadn't flown or neglected to fly with (easyJet, Wizzair, Flybe, etc)

I decided to settle on the new Pizza and Chips box meal with a side of Thai sweet chilli crisps and a drink of Pepsi Max. Despite the "Odd look" of the pizza, it was quite tasty for such a short flight.

Wasn't expecting 5* quality, which some deluded people seem to expect when flying budget airlines…. Or do I watch too many AIRLINE re-runs on TV????? 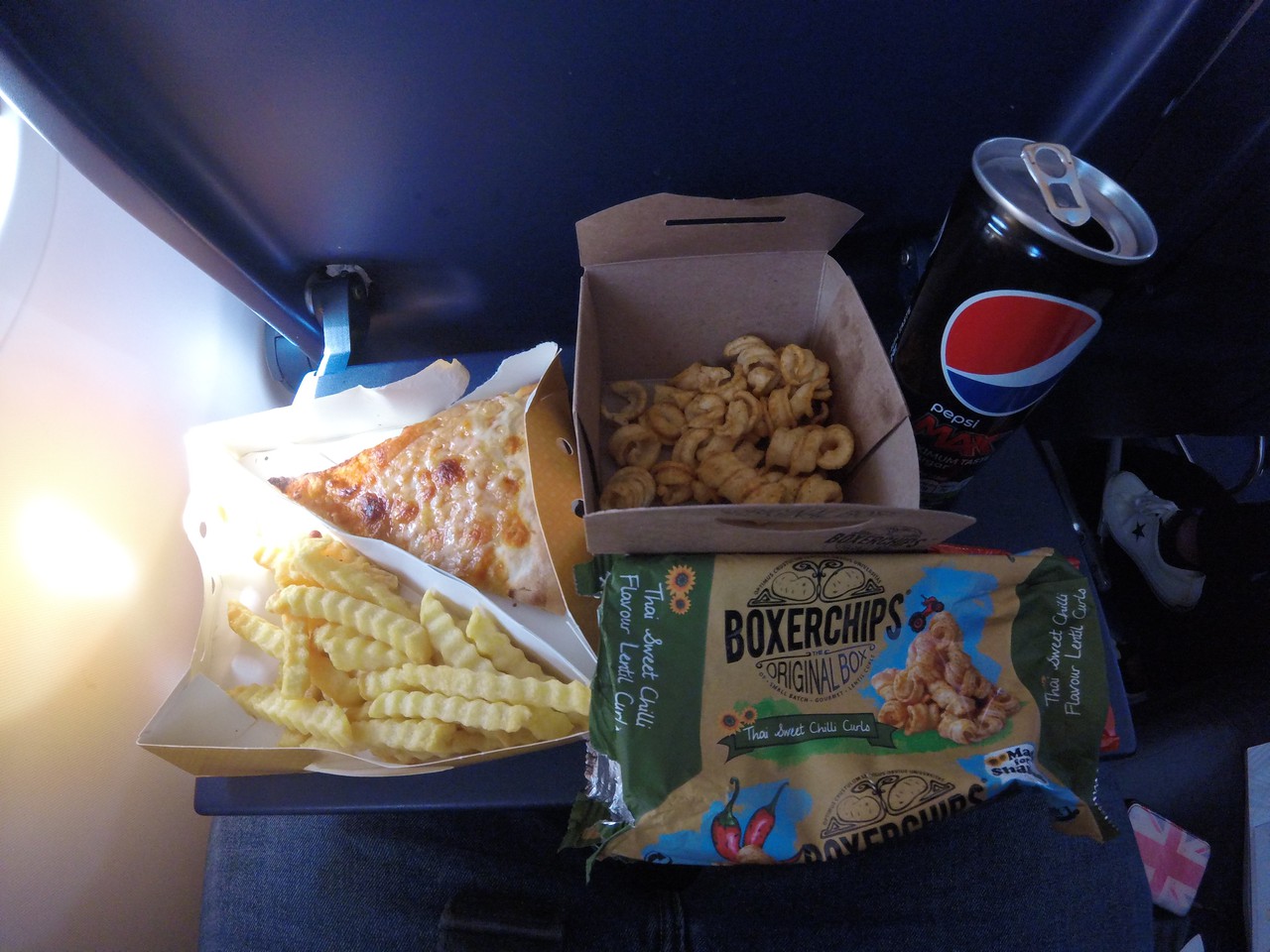 The rest of the flight was uneventful as to be expected on a short hop from any UK city to Dublin. The flight was coming to an end all too quickly. We were descending over the Irish sea and coming into Dublin on a East-West direction into the airport. 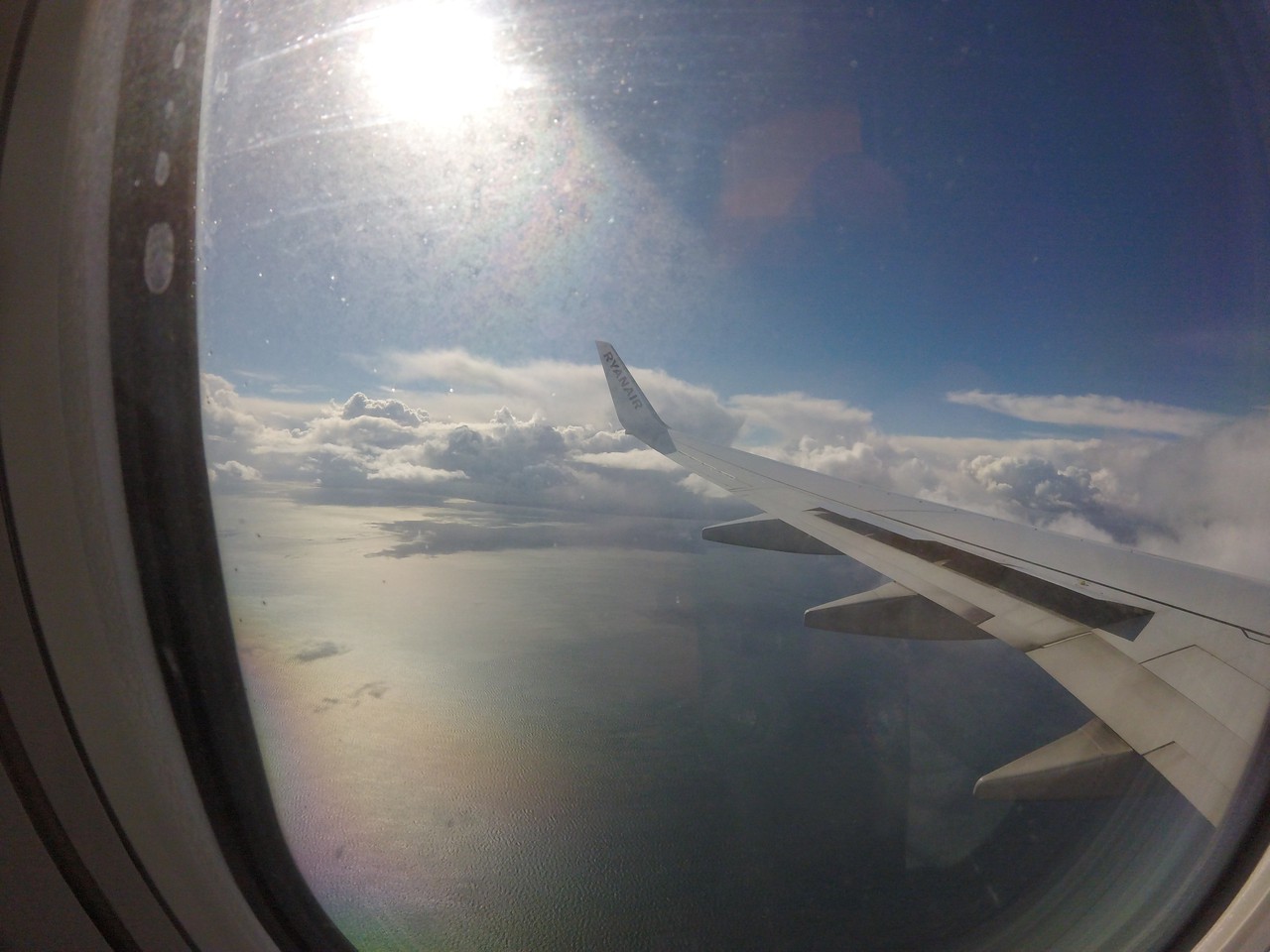 We landed at Dublin about 20 minutes behind schedule. Not the worst delay possible, so I'm happy to write it off as a passenger travelling direct to Dublin. Wasn't like I had a connection that day… 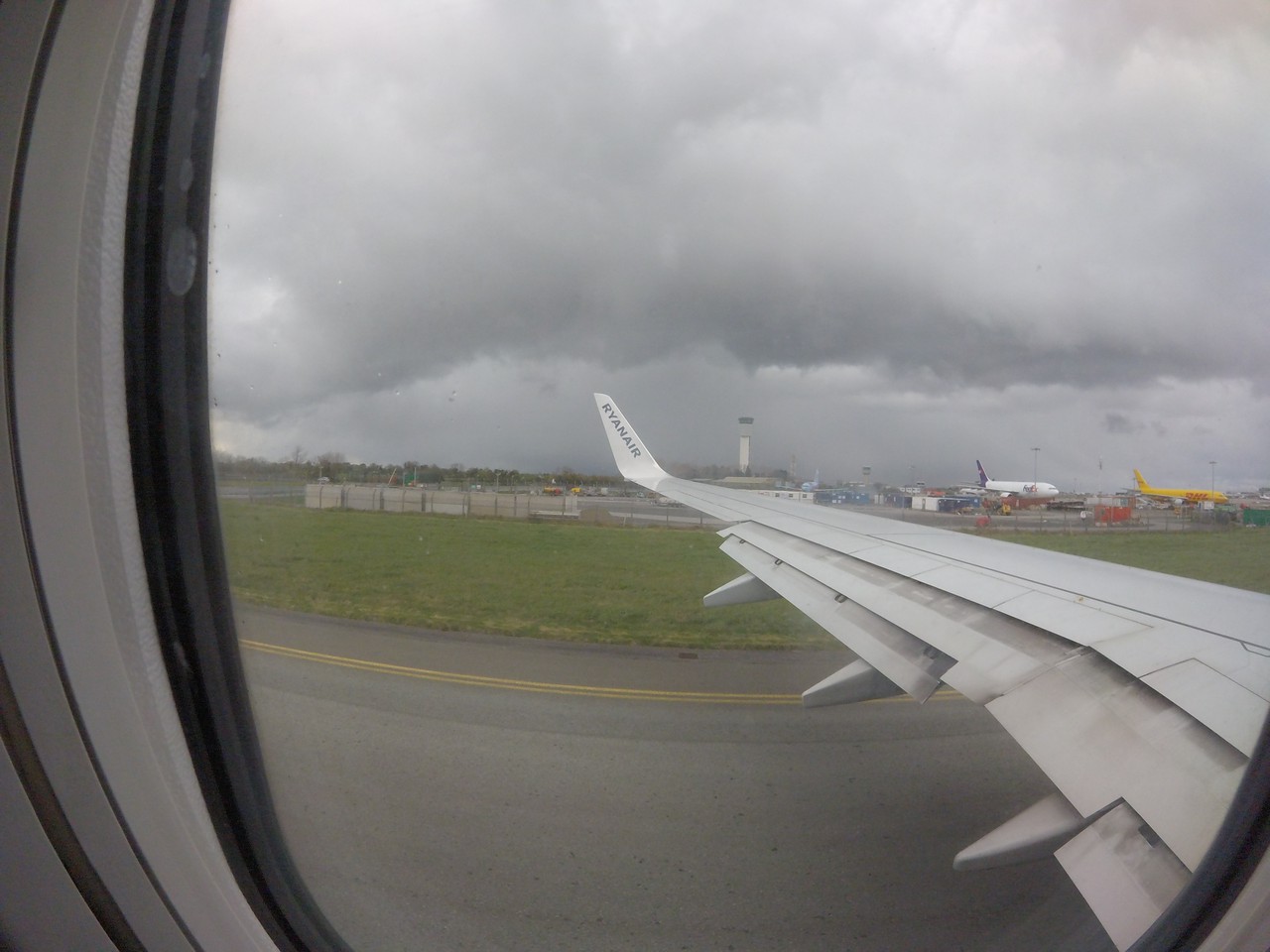 After doing a 20 minute taxi to the far side of the Airport from the runway, we parked on stand at Terminal 1. Despite previous visits being met with objections for various reasons, this crew allowed me to take a photo of the flight deck as well as a visit. I thanked them for a good flight and left quickly, not wanting to hold them up! If they were late due to me- Mick O'Leary would have their heads on spikes! 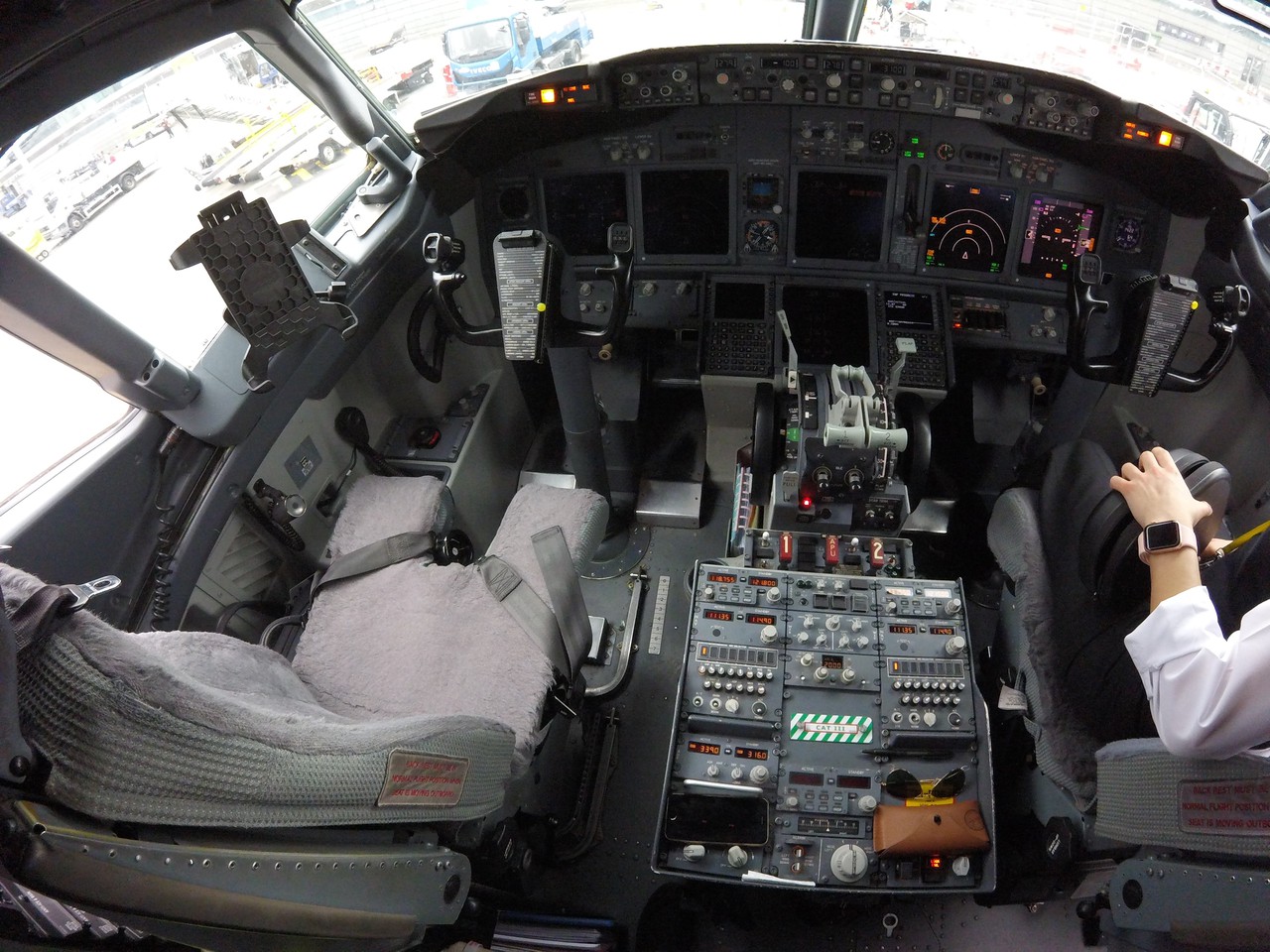 And that was it! My 21st flight with Ryanair and the re-launch flight of the Bournemouth/Dublin service. I can't wait to try this route again in the future. The value is quite good, with off season flights as little as £35 return. 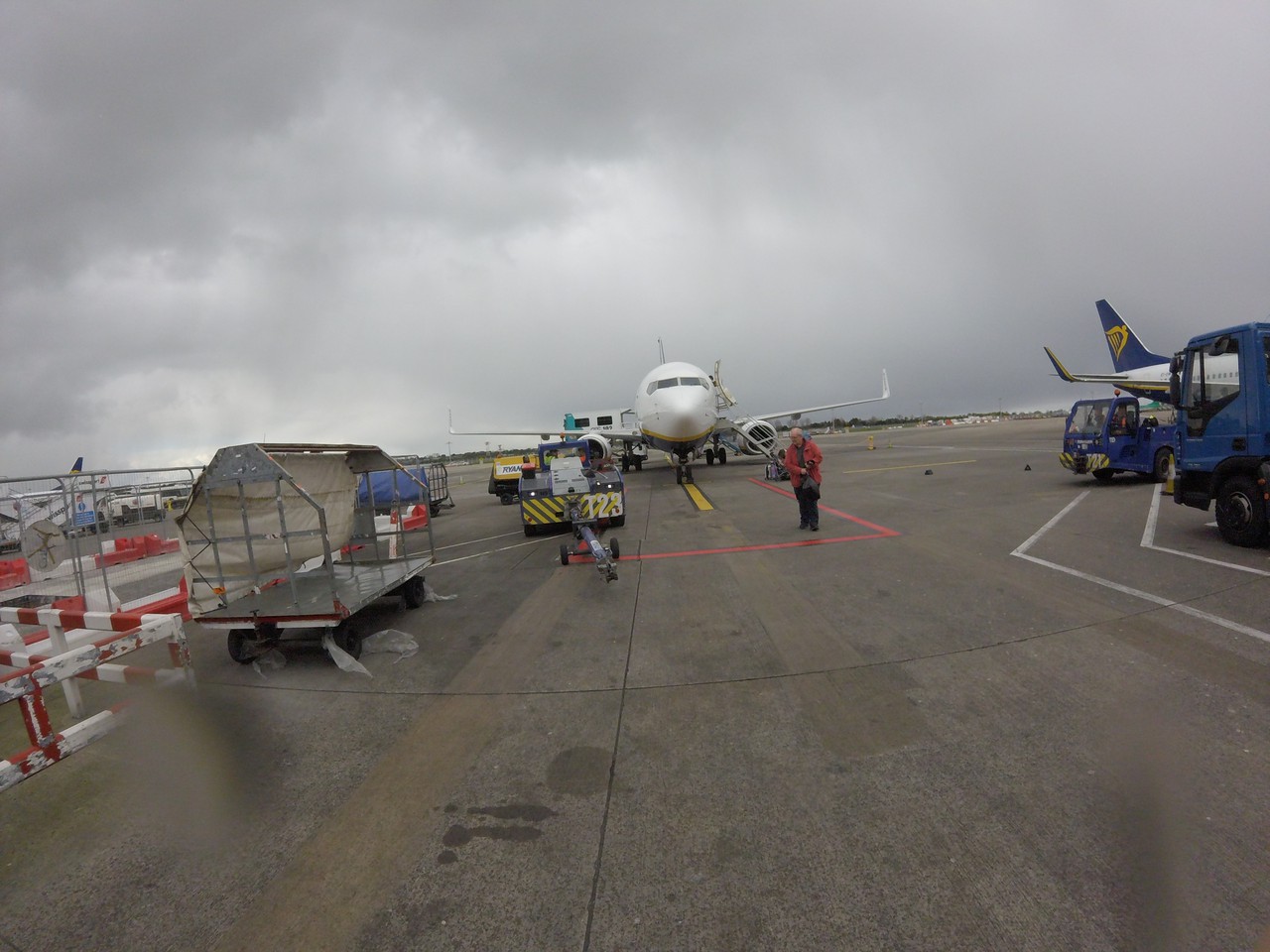 For the Avgeeks watching, I want to quickly give a shout out to the Bournemouth Aviation Musuem. A small collection of vintage aircraft just opposite the airport. If you find yourself in the South of England, it is £6 entry per adult (£3 for kids) and has open flight decks for you to sit in. It is also home to the forward section of a Boeing 737-200 that operated for a local holiday airline PALMAIR, it is the only Boeing 737 preserved in a public museum in the UK. It was the first Boeing 737 to go on display in Europe in late 2014.

The airport can easily be viewed from the museum as well. Making it a good spotting point!

Bournemouth Hurn Airport- Fantastic little airport, nice and quiet as well. I would happily fly from here again, especially when EZY returns in winter for GVA. Clean, Spacious and easy to get to for me by car.

Ryanair- Can't fault them for a cheap and basic flight for a short trip. Was great to fly with them again after so long.

Dublin Airport- Very efficient passport control (thanks to the Bio-metric monitors) and reasonable/frequent public transport links thanks to the buses!