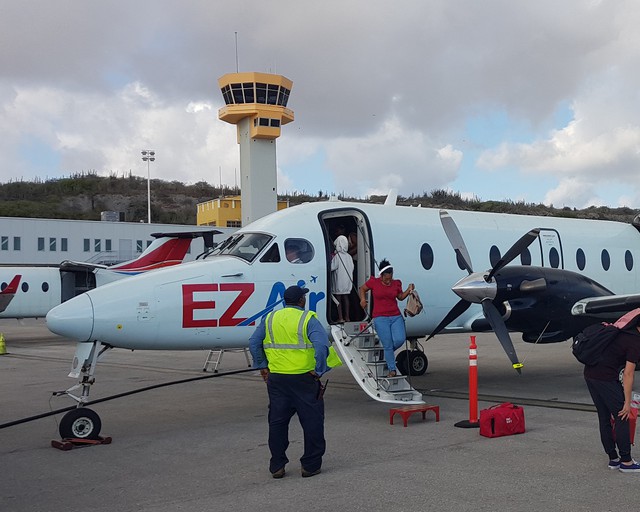 While my original plan was to travel to Aruba to attach myself to my friend's group to head over to Venezuela as my best friend was going to marry his Venezuelan girlfriend, this plan was soon changed when all borders to Venezuela were closed due to the on-going coup in Venezuela and he had to postpone his marriage. Instead it simply became an enjoyable holiday for all of us at my friend's house in Aruba.

As Aruba is part of the kingdom of the Netherlands, it is therefore easily reachable by both KLM and Tuifly Netherlands or via the USA, however it is usually not worth the time to do that. I decided to book a multi city initiary with KLM to fly to Aruba from Amsterdam and to return to Amsterdam via Curaçao as it was significantly cheaper and would result in the same points for my status. To travel from Aruba to Curaçao, I simply booked a flight with a local carrier named EZ Air for about 120 USD, which pendles between Aruba, Curaçao and Bonaire with a fleet of two Beechcraft 1900D, an aircraft I've never flown on.

The full initiary for my short trip you could find below.

EZ Air is a small regional service airline and Air Ambulance based in Flamingo International Airport, Bonaire. In 2018, Mother company medicair NV decided to invest more in EZ Air by purchasing two beechcraft 1900Ds, which were delivered to them in November 2018. While the airline was founded in May 2000 and performed mainly charter and ambulance flights, EZ Air received their AOC in December 2018 to officially perform commercial flights with their beechcraft in December 2018 between Aruba, Curaçao and Bonaire.

A ticket from Aruba to Curaçao would cost you around 120 USD and contains a small backpack (max 8kg with certain dimensions and trolleys are not allowed) and hold luggage of 23kg. Tickets are payable via their offices on all islands or via their website with a creditcard (https://www.flyezair.net/)

While my time was unfortunately over, it was now time to head to the airport after a wake up call of 6 am. The check-in counter of EZ air only opens 75 minutes to departure and closes 60 minutes prior to departure as it is only a small aircraft. Around 7 am, my friend brought me over to the airport.

While Aruba's terminal is one big building after security and immigration, the public area is seperated in three buildings. A Non USA departure hall (Note that Aruba has a pre-clearance facility, so all flights to the US are considered domestic), a USA departure hall and an arrival hall. As my flight was going to Curacao, so I took the last building which was a neat looking building with two palm trees in front of it.

The building itself was spacious and only contained some toilets and check in counters with two check-in counters open for a flight of Winair and EZ Air. While the aircraft is only capable to have 19 passengers, check-in was done rather quickly with no human being in line and I received my boarding card which indicated seat 2A. It turned out that all cards of all passengers did contain seat 2A and it was free seating.

I spend a few minutes at the seating section prior to immigration with my friend to say our byes which was an open space with some comfortable seating to your availability.

Immigration and security were very quiet and I cleared it in a few minutes with plenty of shopping facilities and some food stores, though a long line was building up in front of the door to the US pre-clearance facility as it would open in 15 minutes at 8 am. Another nice thing is that when you pay for something in Aruban florin in the terminal, you will receive your change in US dollars.

An Air Antilles ATR 42 that is currently operating on behalf of Winair from Aruba to Curacao and would continue to Sint Maarten later on.

The flight was full and boarding was called 15 minutes past our original boarding time and we would be shipped to our plane by bus. No big deal as boarding was done very quickly (what can you expect with 19 man only?). Our flight was operated by PJ-EZY. A 23.2 year old Beechcraft 1900D that has been in service with a large number of airlines before joining EZ Air's fleet. The aircraft was newly delivered to  Air Alliance in 1996 and has been in service with Air Nova, Air Canada Regional, Jazz Air and Air Georgian before joining EZ Air in November 2018.

While I discovered by now it was free seating, I moved up to seat 4A which came with plenty of legroom and to my surprise I was able to fully stand up in this aircraft as it was very spacious. Definitely something else to what I'm used to as I fly a Metroliner which is a direct competitor to Beechcraft.

The seatpocket contained a large safety card and a very small EZ Air magazine which felt cheap and was not really interesting to read.

A ventilator blowing cold air was on your lower left and would only work when engines were running, so it may be a bit hot when you are waiting for the aircraft to start it's engines. Especially if you are in a Caribbean place.

The overhead compartment consisted of a very old reading lamp with the switch above the lamp and a non-smoking sign.

And this was the window view of seat 4A. The windows were not that clean as a lot of dust was covering it, but I managed to make a decent photo somehow. The beechcraft 1900D is configured in a 1-1 configuration meaning that your seat is a window and a aisle seat. Nothing better than that right?

Like I said, the cabin was very old school with an open cockpit.

The first officer gave instructions to those who were seating next to an emergency seat  how to open the door, while the captain started one of the engines. It became much cooler in the cabin when both engines were running and we left our parking stand about 4 minutes ahead of our departure time. The captain announced himself over the intercom (which was in a perfect condition and loudness) and gave us the emergency instructions too.

Two minutes past our departure time we were already rolling for take off and nothing beats an old turboprop's sound when it's firing up for departure. 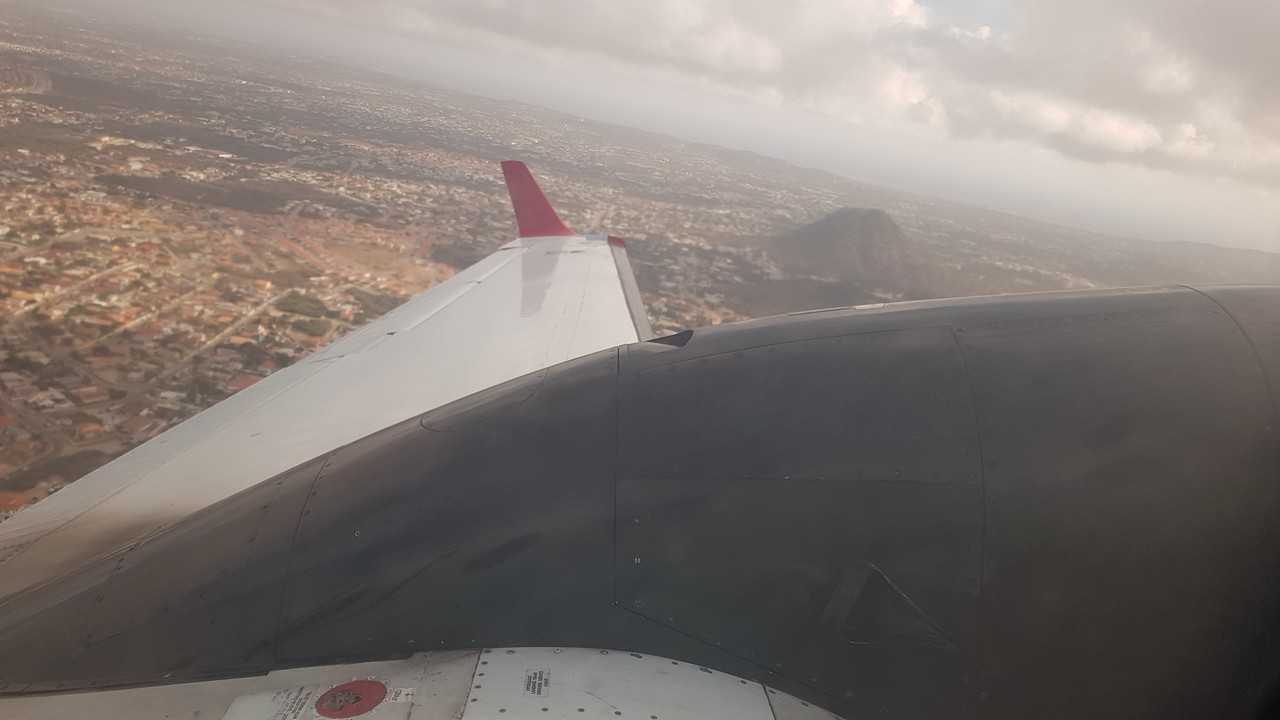 There is no service provided in any means as there were no bottles available nor any flight attendant towards Curaçao. No big deal as the actual flight only took 23 minutes at a low level altitude (7000FT).

The flight route is basically a straight line towards Curaçao after departure, however our flight had to do some weird maneouvring as our flight was second in line and was ordered to create some distance with the other aircraft in front of us.

About 15 minutes in flight, we finally saw ground again and were already in approach to Willemstad-Hato International Airport. 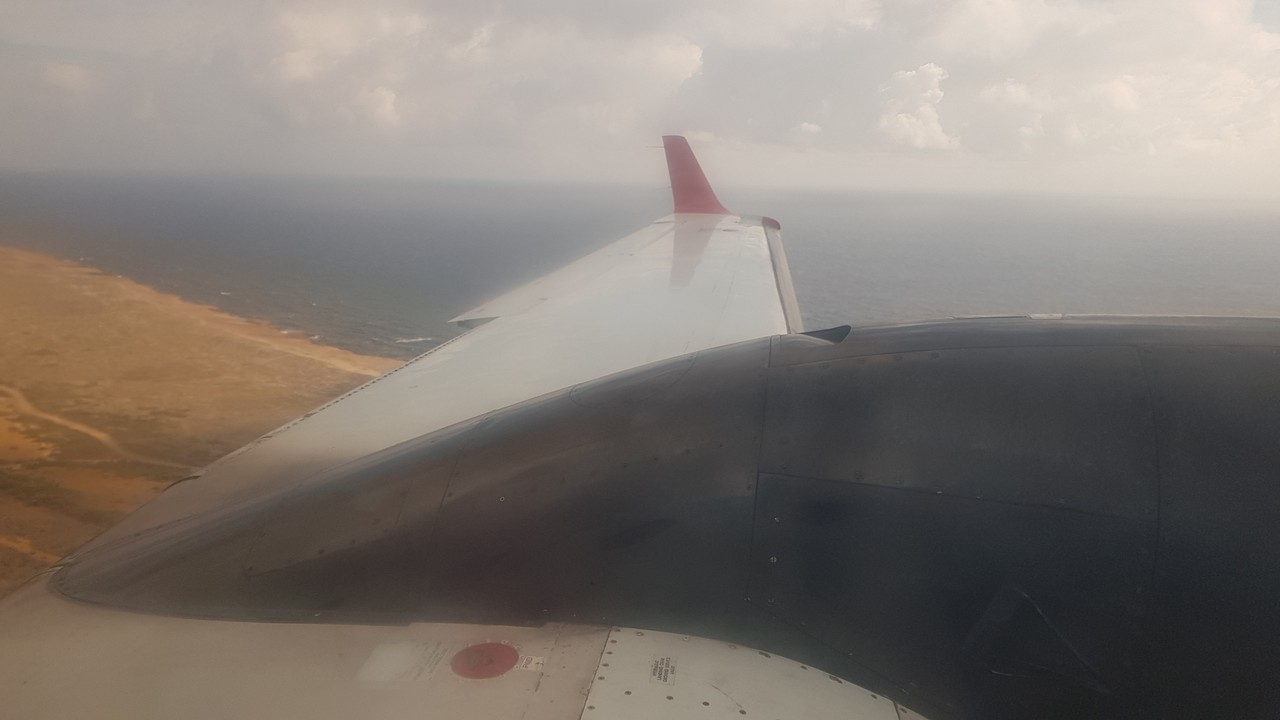 The landing itself was nicely performed, but a sad sight upon exiting the runway as all former Insel Air planes are rotting away. A mad dog and some Fokker 50s. While Insel Air is banktrupt and done, a new airline is about to be established here with the name Jet Caribbean who plans to operate two Fokker 70s.

It took a while for a bus to arrive in order to deplane our plane, but it was once again very quickly done and it gave me a nice opportunity to capture our bird for one last time, while the other Beechcraft 1900D (PJ-EZA) of EZ Air was standing next to it. Our specific aircraft would continue to Bonaire soon after.

Before we moved to the terminal, the bus stopped by another plane of Divi Divi Air. A British Norman that was capable of transporting 8 passengers.

The ATR 42 we saw earlier in Aruba was already fuelling for it's continuation to Sint Maarten, while one of the Fokker 70 for Jet Caribbean was already parked at Hato Airport.

Even though I bought this flight on a separate itinerary, I was forced to pass immigrations and pick up my baggage again in order to check in for my flight to Amsterdam in about five hours. Immigration cards were not handed out to you on board, so I was forced to fill a card rather quickly before heading to immigration, which was very good staffed with no lines at all. By the time I was through, our luggage was already on belt no. 2

The arrival hall of Curacao is in a different building and was rather new with some seating facilities.

And a beautiful Fokker F.XVII was hanging there too. PH-AIS is a famous registration for the Netherlands Antilles as it was the plane of ''West-Indisch Bedrijf'' which was a subsidiary of KLM who served the Antilles and neighbouring countries like Surinam and Venezuela. West-Indisch Bedrijf was  later known as ALM (ALM Antillean Airlines) that ceased operations in 2001.

It was a very enjoyable experience to fly EZ Air from AUA to CUR with a beechcraft 1900D. Though it is only meant for a short hop, you can't really expect much of it. The aircraft itself and type of flight was and is still very entertaining. I however would have loved to see a bottle of water or some sort being handed out to you, cause it can become very hot in the cabin when engines are not running.