Ah well, the first crucial connection that wasn’t met: I had been rebooked on to UK719, the last of three services from Delhi to Kolkata as of July 2018: Vistara have since introduced a 4th flight on this sector pretty much mirroring Air India’s flight times. Of course, Air India would be on the 2 787s, 1 A321 and 1 A320neo, while Vistara is a combination of A320neo and A320ceo airplanes.

So anyway, I booked on UK707 originally on the basis of the assumption that the NEO operating UK944 from BOM ( the plane I came in on) would operate to CCU as UK707, but this was before Vistara rejigged their schedule in early June (2018), one of which was that UK707 would be a Amritsar - Delhi - Kolkata, changed to an A320ceo, meaning that I would probably miss the connection (and so I did).

Vistara therefore booked me on UK719, and the rotation for this one is pretty simple: this is the plane that would head to Kolkata and Port Blair in the morning as UK747, before returning to Delhi as UK778 all the way back at 1930 about 12 hours later, before flying to Kolkata at 2010 hours as UK719, and spending the night at Kolkata (it used to be a red-eye flight to Pune, but that stopped).

So much for that. I had visited the restroom real quick, went through transfer security which was honestly a little pointless but that’s how it is sometimes, and got up the escalator to be let out with the other passenger that would check in & clear security at Delhi: the shopping area, and whatnot. I didn’t have any energy whatsoever to even walking around, I found a recliner to lay on close to the gate: VT-TTE was looking for a decent on time arrival from Kolkata, I had a view of some Jet Airways airplanes, and a Zoom Air CRJ-200! 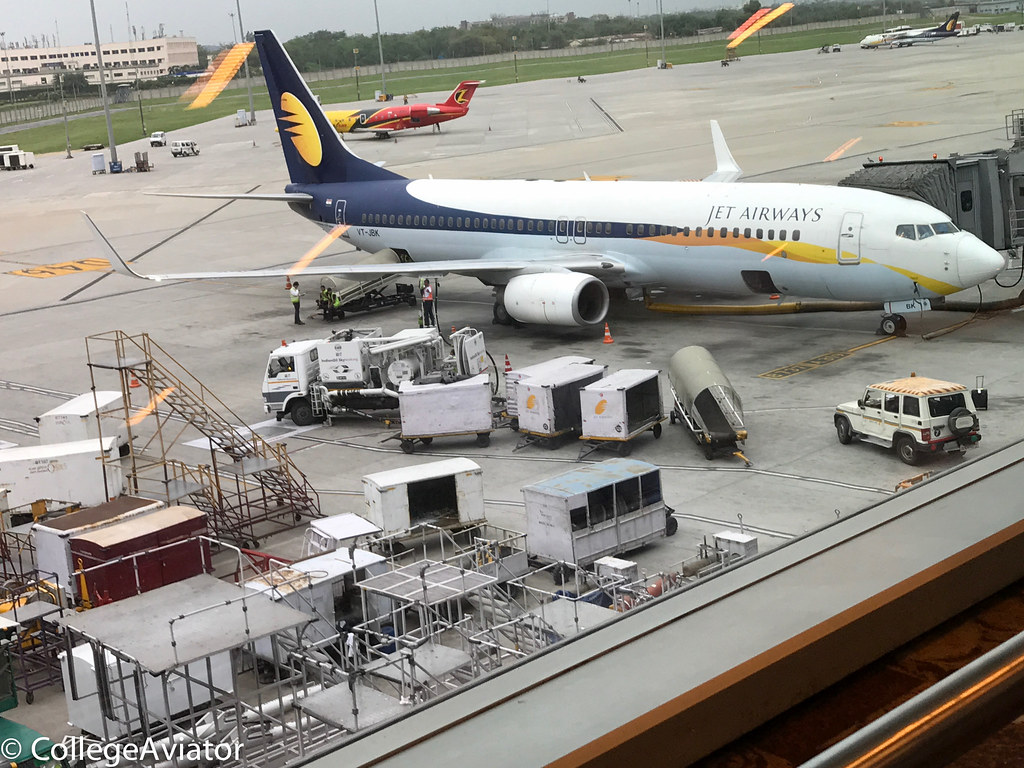 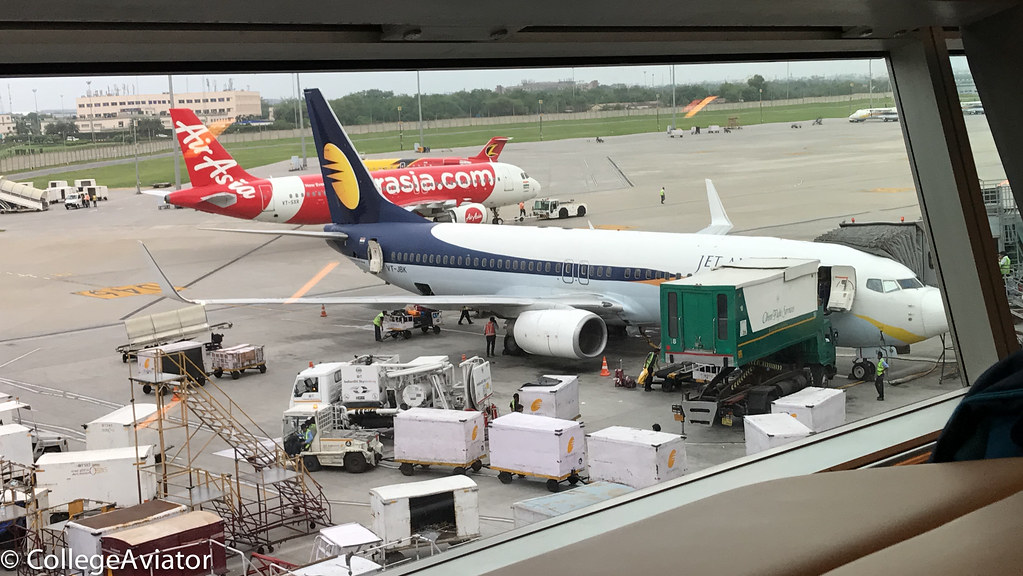 It was 1847 hours IST, on July 19th 2018. Time check: 50hrs17min since I had left the hotel in Fargo, and here I was with an unplanned 2hr40min extension, barring any delays. I needed to be awake, come what may. With not a whole lot to do, I decided to head right for boarding which was called 27 minutes before departure time. This was from gate 45. Jogging through my memory, VT-TTE was indeed a new registration for me! Boarding was fairly uneventful. 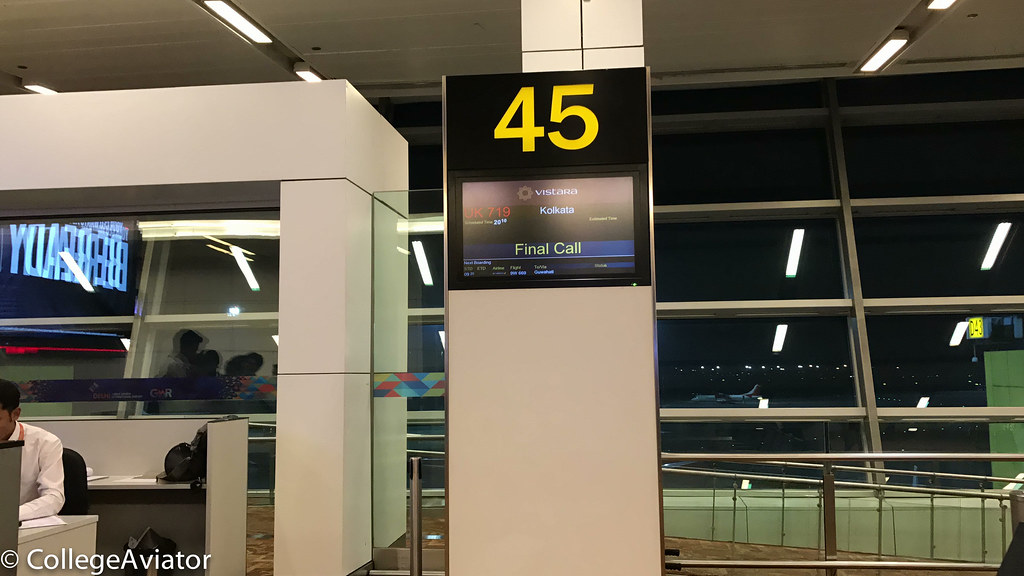 Boarded 14 minutes before departure, I think the crew were pretty welcoming as well. The interiors looked quite tired and beat for a 3.8 years old A320, and if anything represents quite the inconsistency between airplanes for a young airline like Vistara. 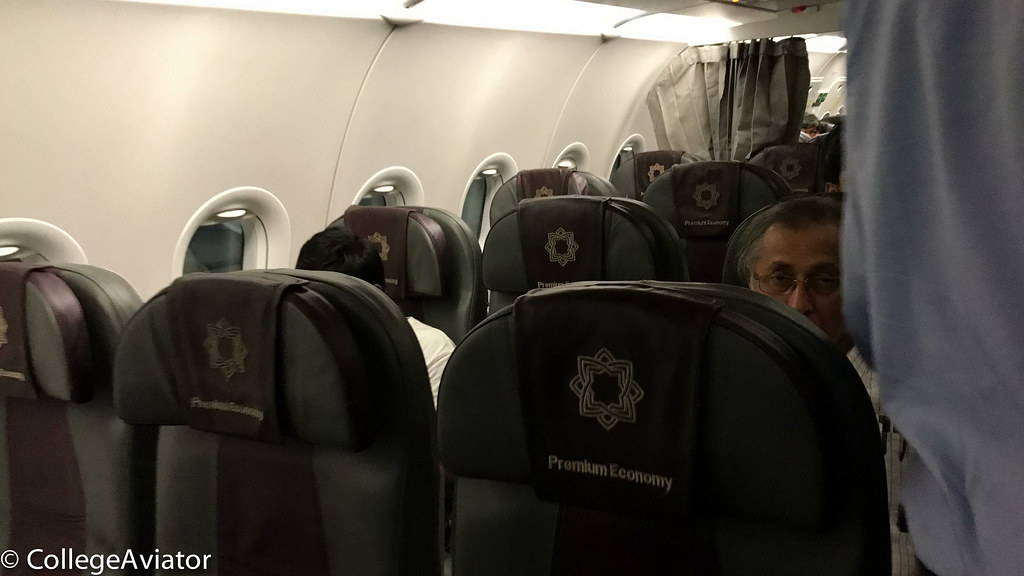 Seat 18F was booked for me - it looked like a fairly empty flight, the back couple of rows being completely empty and the middle seat being empty. I did feel the seat padding show it’s age, it was quite firm. The guy on 18D had some issues with me recording but then pretty soon I had no business of recording his face anyway so he needn’t worry about it. Captain made an announcement too, but unfortunately I did not gain much from it. 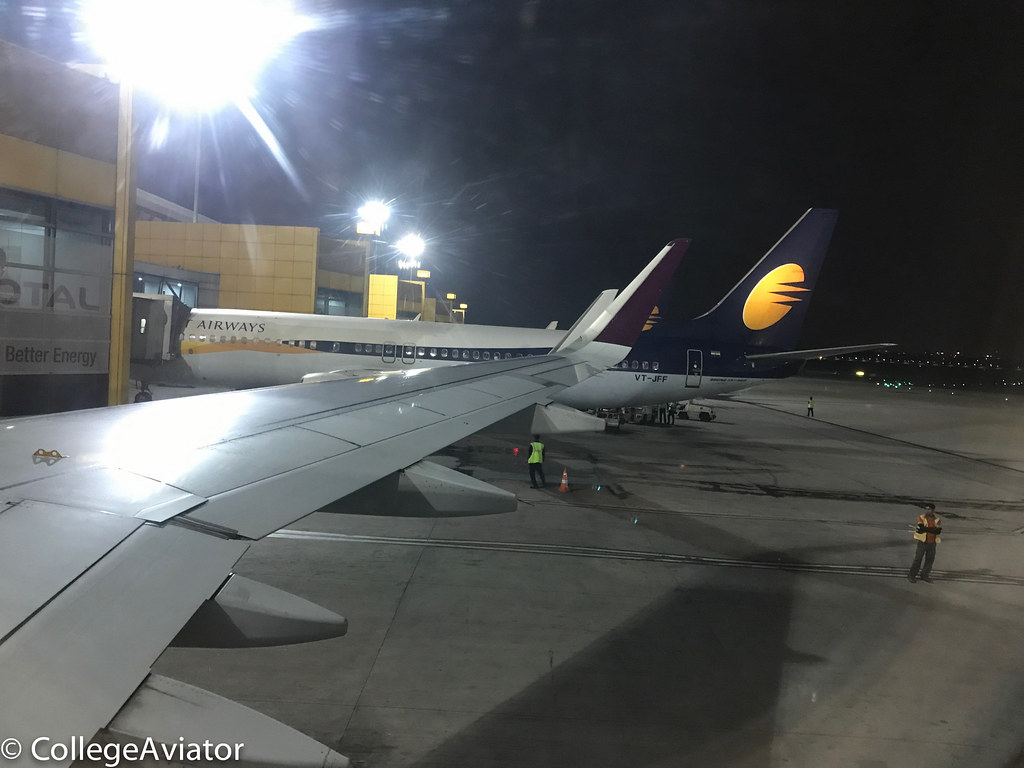 Broke my heart a little bit that Vistara, too, have succumbed to third party advertising on the seat backs which make for very un-premium feel, so to speak. 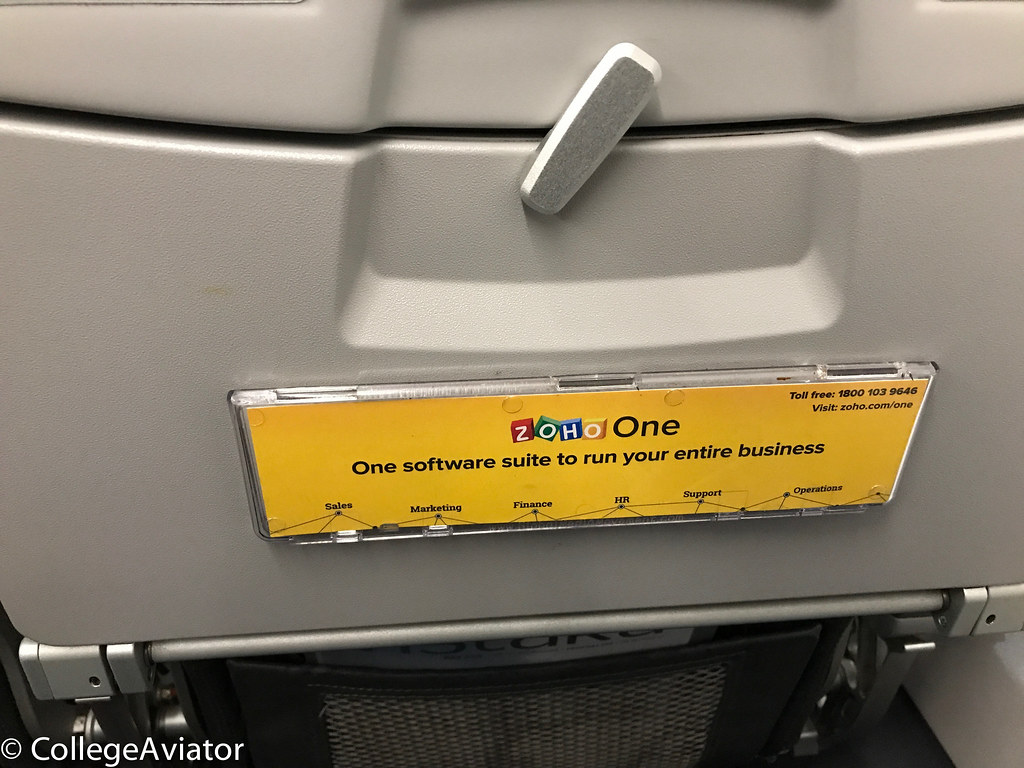 Pushed back a touch late at 2025 hours, 15 minutes behind schedule, and taxied to the runway, all of which happened smoothly. I was a little concerned the strobe lights were not turned on for quite a while, but these were turned on before taxiing on to the runway - ‘Remember to not blind everyone on the ramp with the strobes at night, you only need them before taking off’, I recalled my flight instructor telling me.

Lights out for departure.. 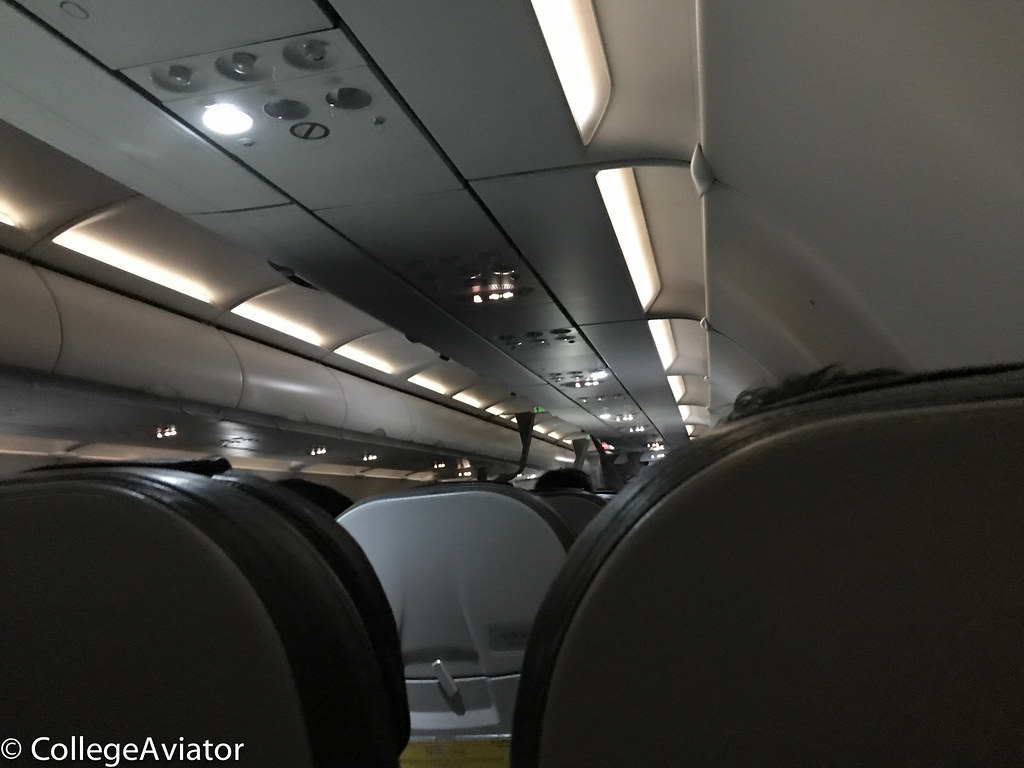 Took off 13 minutes after pushback at 2038 hours, no issues, it looked like Gurgaon was quite the happening place at that point. We turned east, and I fell asleep right away. 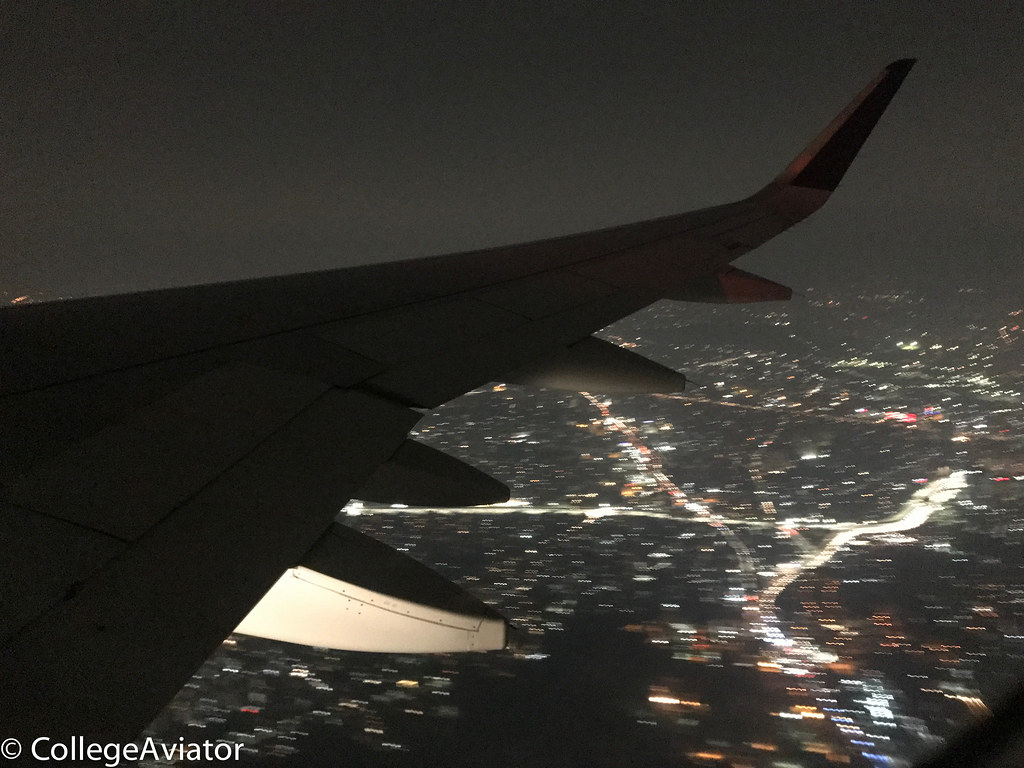 What followed next was embarrassment for me, but given how tired I was, this was passable. ‘Mr. CollegeAviator’ I heard a voice, as I continued to sleep. ‘Mr CollegeAviator, sir,’ I heard again as I finally woke up realizing I was being addressed by my name, in Economy, for a flight I wasn’t planning to take!

And so, the confusion continued - ‘For dinner we have chicken biriyani or vegetable biriyani’. ‘Uhhhhh dinner, you said?' I blurted out, completely forgetting where I was, what I was doing, possibly even half asleep at this point! ‘Yes sir, chicken or vegetarian?’ ‘Oh, yes, dinner, right! I will take the chicken, please!’ The tired me probably wasted a minute of the flight attendant’s time, as she was in the middle of service. Oh dear. I had fallen asleep right after take off, it was 2110 hours, 32 minutes in flight, as I received my meal. 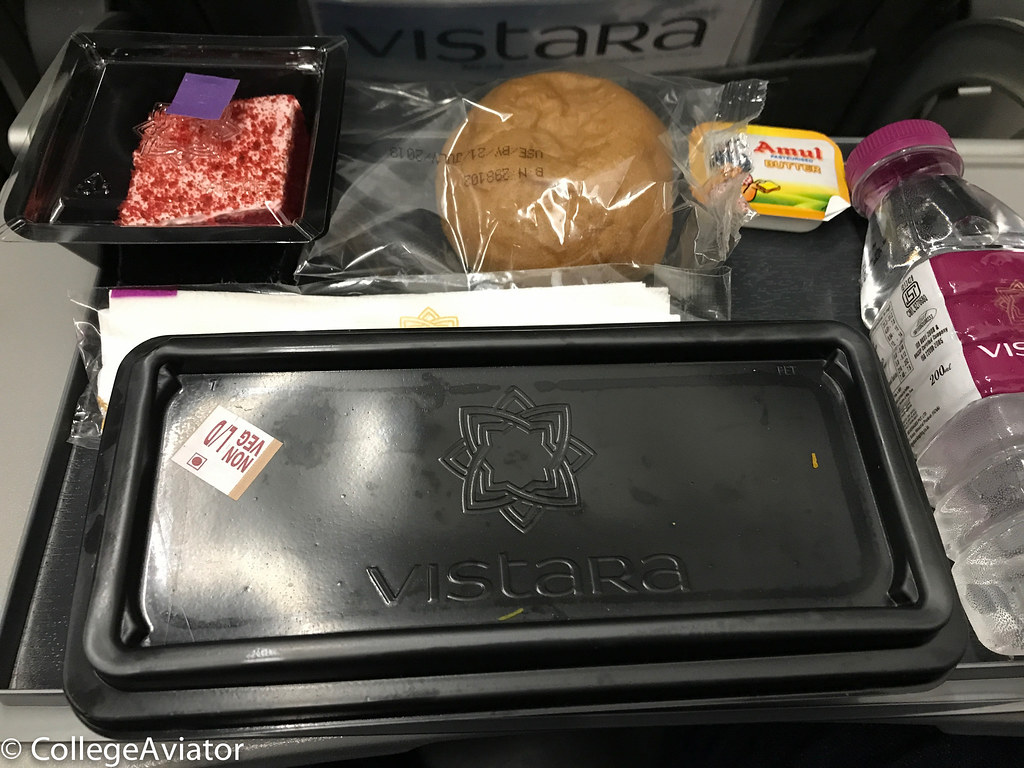 There were questions in my mind: some with obvious answers, some not quite. I remember Vistara having the innovative box meals, so why was a tray in front of me? Vistara announced a few weeks before that both Premium Economy and Economy meals would be served on a tray. But how, how did the flight attendant know my name?! I do not hold status with Vistara, so really I was just another passenger - what was going on?!

The meal itself was OK - I was done with airplane food, feeling very tired and a little sick, I had most of it because the hunger lingered around. The dessert was outstanding, but the main course was so so. Again, nothing horrible or inedible, but I have seen much better on Vistara. 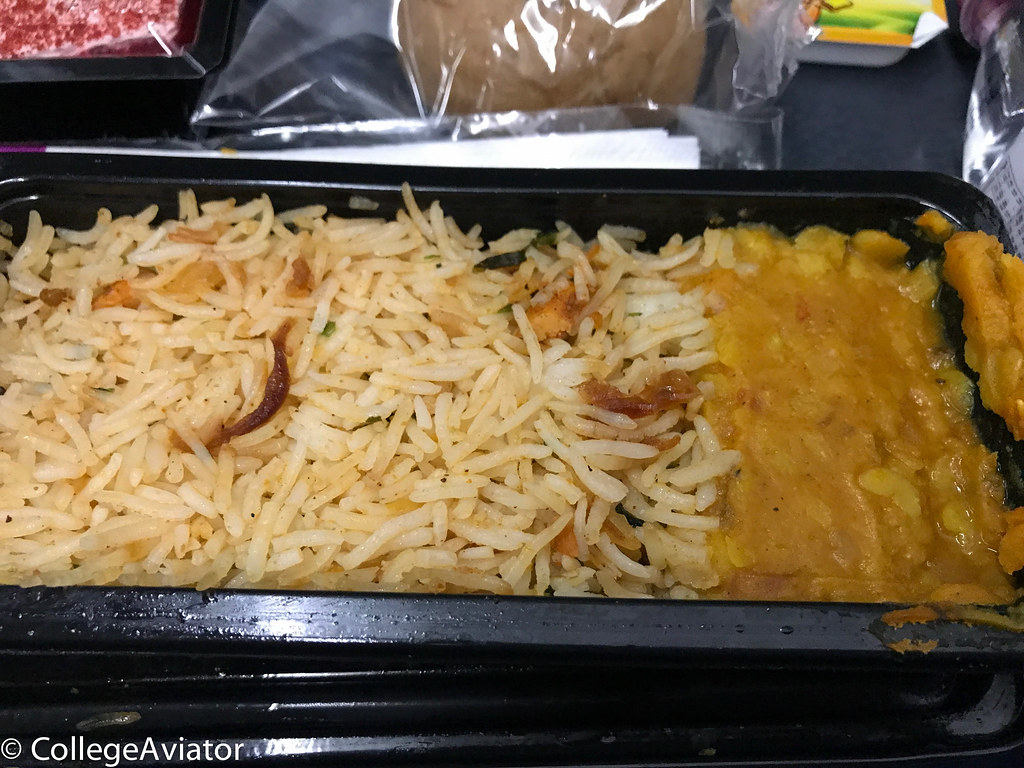 Predictably, I fell back asleep as the tray was cleared away and tray table miraculously tucked away.

At 2200 hours, 1hr22min in flight, the first officer made their arrival announcement: the only reason I know what was being talked about is because of the video footage for the trip report. Please do check it out :)
Anyway, we were at 35000 feet, west winds (surprisingly!) with some rain were being reported, a thunderstorm moving out. Temperature a crispy 30C, but not as much traffic at the time waiting for us, so we only had about 20 minutes of flying remaining before landing. 20 minutes before I was done with flying for a little bit!!

It wasn’t the most comfortable sleep, given how tired and disoriented I was, but I remember one of the first things I saw were the lights over Kolkata, flaps down, and setting up the approach. 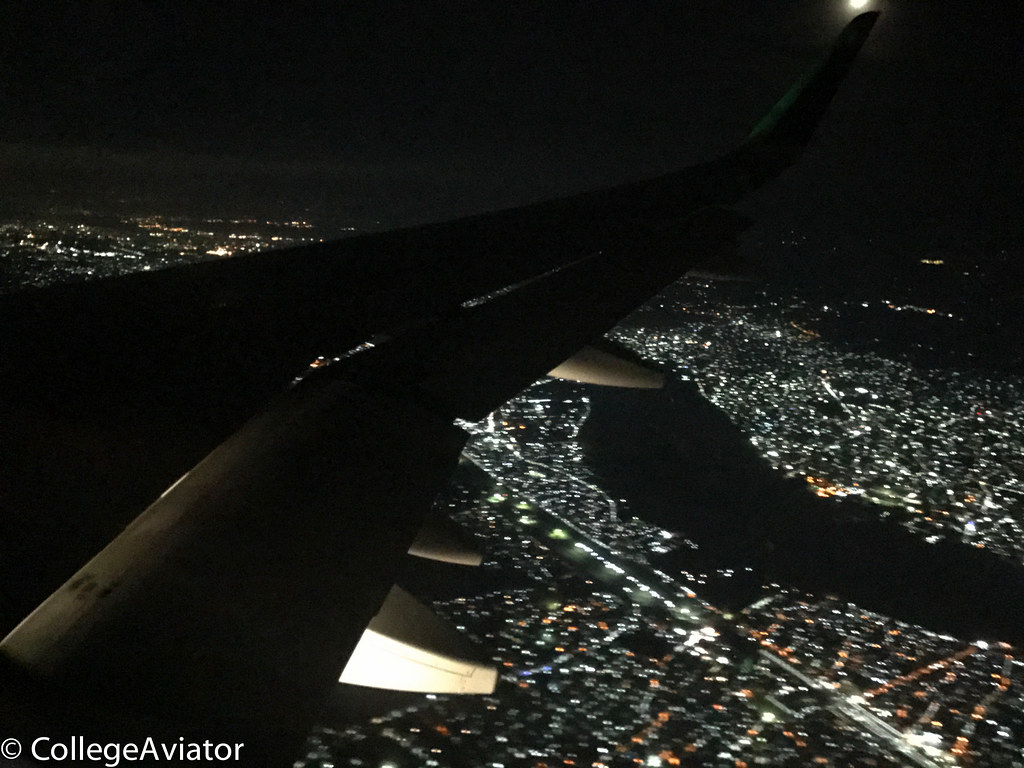 I held the camera, sorta firm, as we slowly came down. I couldn’t believe that this had all come to an end. Lined up and touchdown a little firm on Runway 19L at 2228 hours, after a flying time of 1hr50min, and about 54 hours since I had left the hotel in Fargo. Holy crap!

Taxied to a remote stand, but I was very surprised to see an Air India Boeing 747-400, and seeing this sure lifted my spirits up, a lot! Parked at 2235 hours, a delay of 15 minutes 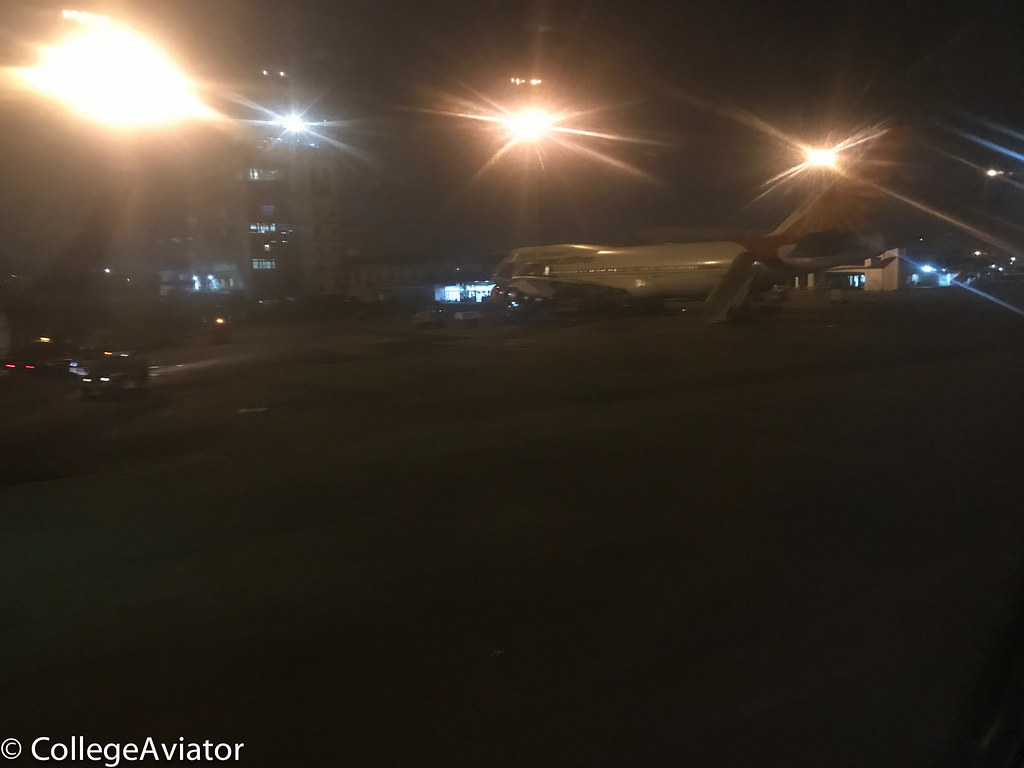 With nothing to lose anymore, I took my time disembarking from the plane. I did, however, feel really bad for my family who had to wait a lot longer to see me. As I walked through the cabin I noticed that most if not all seats were starting show it’s age, perhaps not helped by the gray colors.

The worn out & tried looking seats… 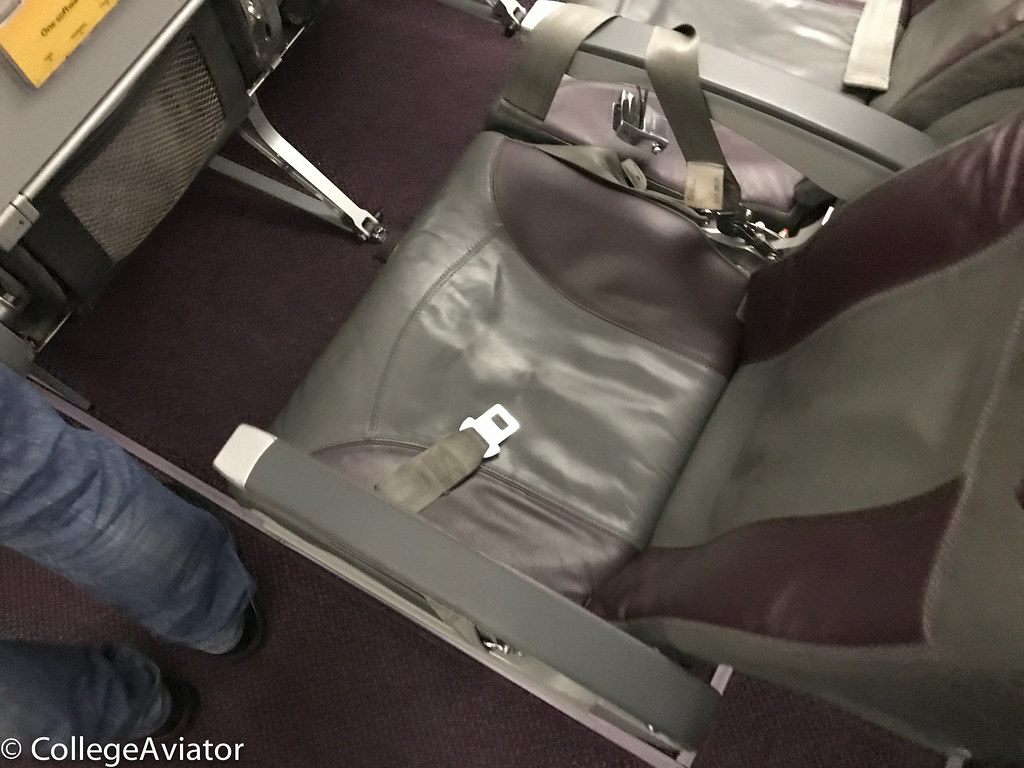 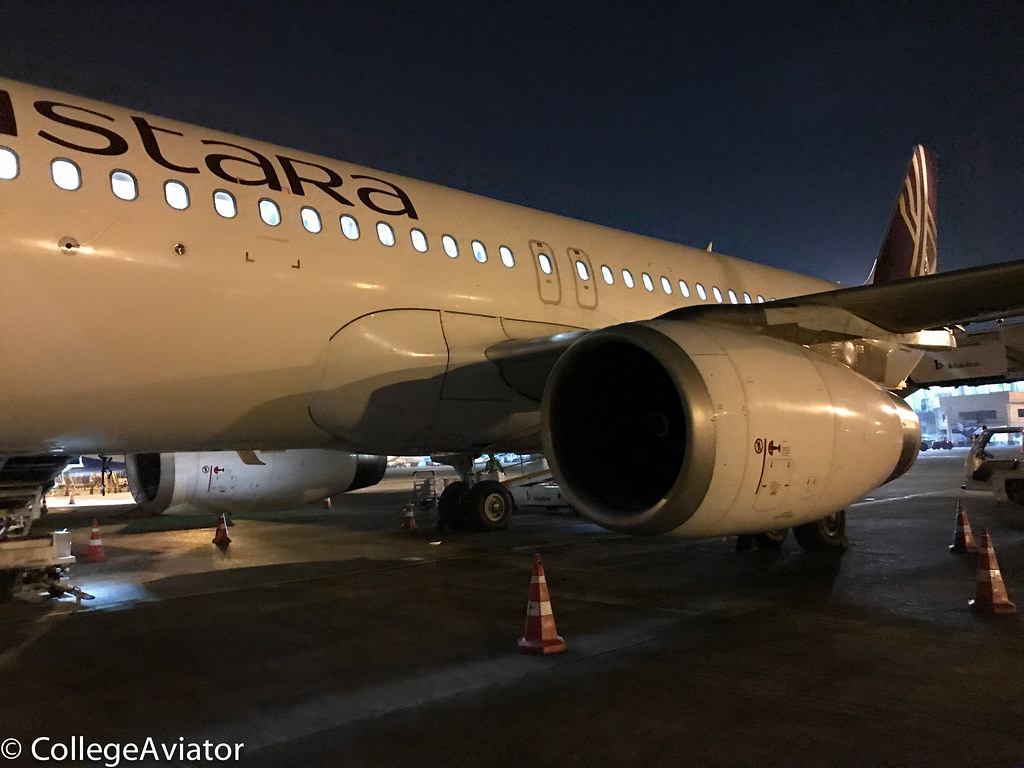 Took the bus back to the terminal, nothing too dramatic, although I did appreciate Vistara at Delhi honoring my priority baggage tag even after this flight being in Economy and a new tag being attached due to the change in flight, so waiting at the baggage belt was barely 7 or 8 seconds. 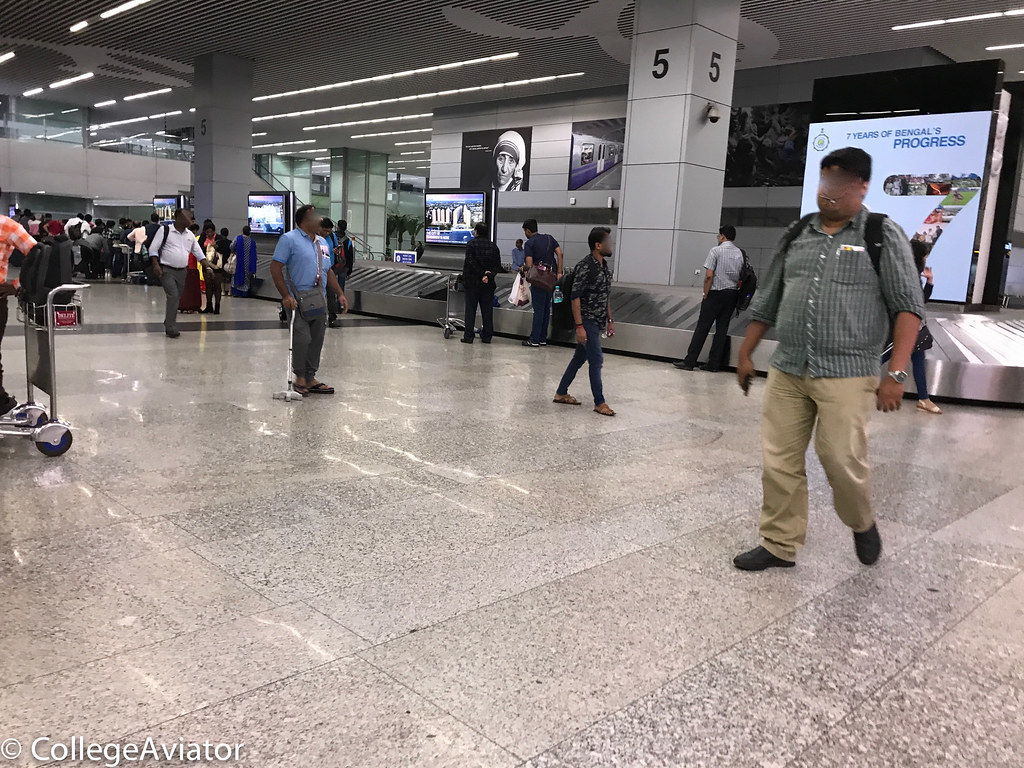 As I headed out, a round of applause awaited a very zombie-looking CollegeAviator by my family as I had finally made it home, nearly 3 hours later than scheduled.
See more

And there it is! I had made it home. Again, pretty standard from Vistara, the food was so so, the seat wasn’t very comfortable unfortunately, a little late, but a fantastic crew (member) who dealt with a very confused and jet lagged me….. Overall, a decent set of flights from Vistara, and nothing much to report home.

I did, however, finally manage to pull it off. I had done it. I logged in a Jet Airways A330, I had logged in a A320neo, and I got to experience all 3 classes on an airline. I was determined to make it work, without any last minute chickening-out(s), and it worked out, barely. The Turkish Airlines delay out of Istanbul made for some heart in mouth situation at New Delhi, and the ATC delays at both Delhi and Mumbai made for a delayed arrival in to Delhi, and therefore a rebooked flight. If anything, a 50% success rate, but I like to keep that aside and consider logging in the Jet Airways A330 flight as the biggest success, and well, I did it!

The contributors of Flight-Report published 6 reviews of 2 airlines on the route New Delhi (DEL) → Kolkata (CCU).

The airline with the best average rating is Vistara with 8.1/10.

The average flight time is 2 hours and 10 minutes.