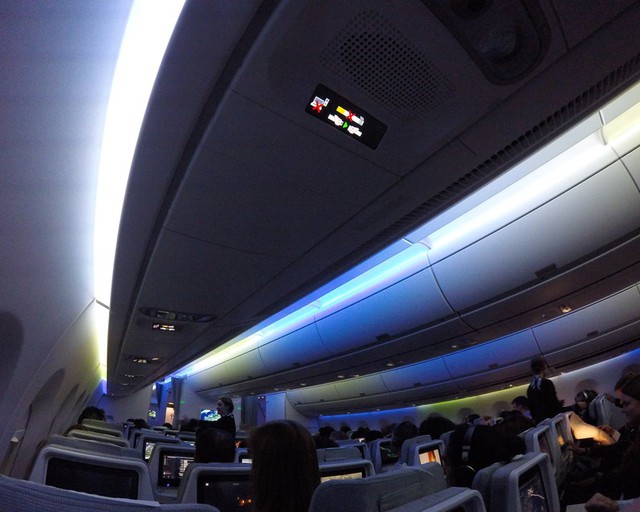 #34 out of 71 Airlines A minimum of 10 flight-reports within the past two years is required to appear in the rankings. 177 reviews

Another Finnair A350 experience from me! Flying on the new evening wide-body service which alternates between the Airbus A350 and A330. 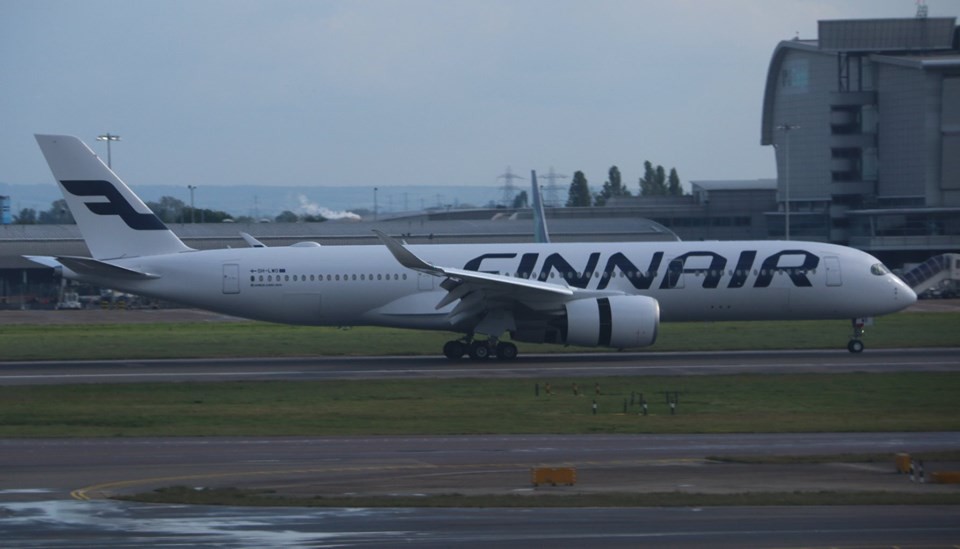 My flight on this occasion was to be operated by a rather brand new aircraft, only two weeks old on the day I flew it: OH-LWO (Seen above on the in bound HEL-LHR service). 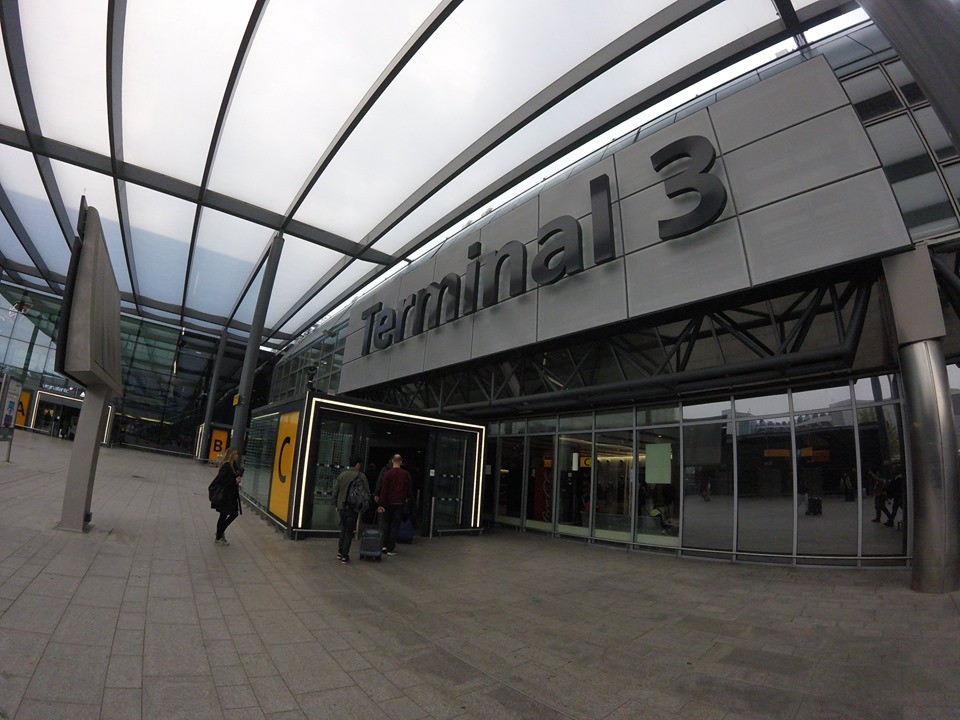 Getting to London Heathrow, we got checked in, as we wanted proper boarding passes, it was my friends first time on Finnair, and he was keen to find out more as I had been raving about them since my first flight on the AY A350 back in Oct 2015 (link to that report in the conclusion at the bottom).

I had pre-booked us in flight snack items (wraps/sandwiches) that Finnair offer from £5 upwards depending on the item. I hadn't used this service before and now seemed like a good time to try it.

I also got priority security for myself as I have Finnair Plus Silver (OneWorld Ruby)  membership from conducting 20 One-World Alliance flights in a year long period. It was also handy as it also provided me with discounted seat selection. 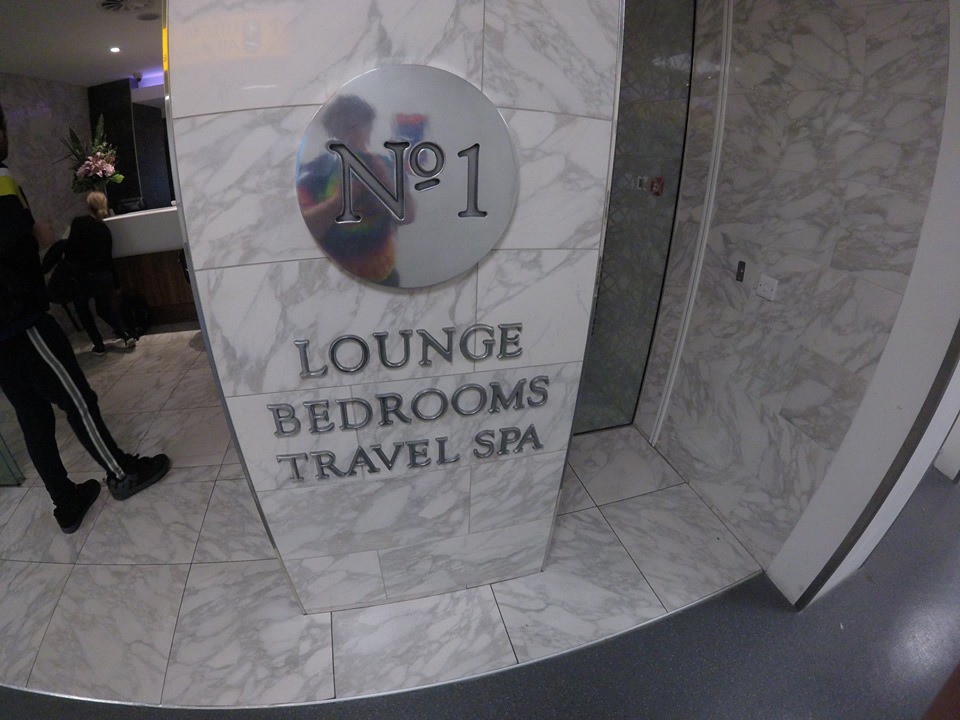 I had visited the LHR T3 No.1 Lounge in January 2018, when I flew Finnair in business class from LHR-HEL as part of my mega USA Tour. With entrance at £35 each at the door, we decided to go for it, we had 3 hours in the lounge which included a free meal off the menu, free beverages, a great view across the arrival runway from T3 and to top it off- a shower room! 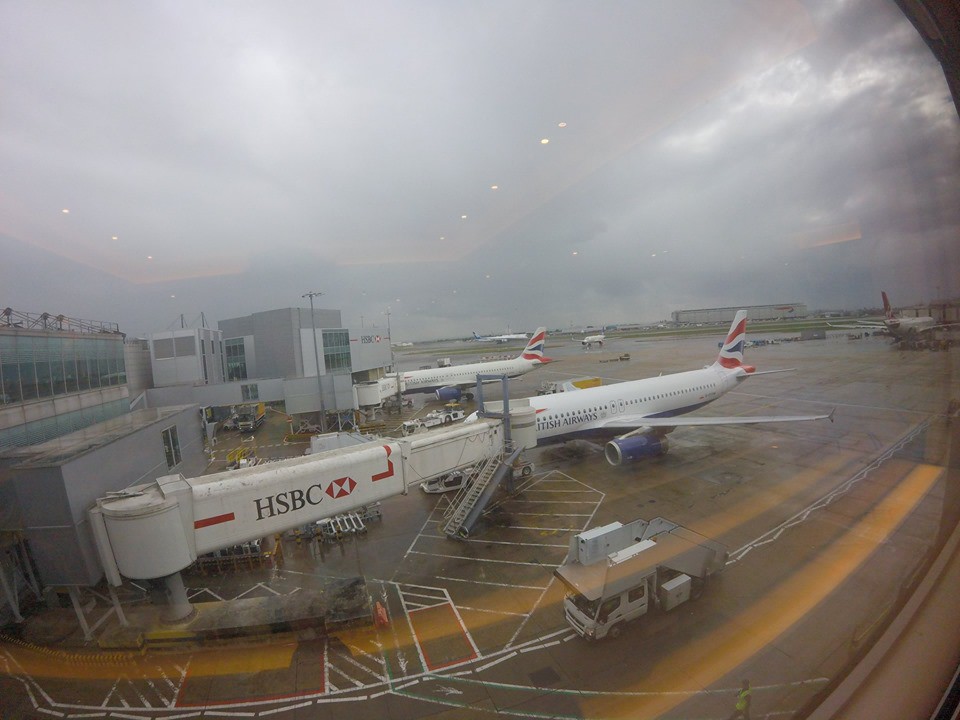 For my lounge meal, I enjoyed the Cheese plate with a cola & Jack Daniel's whiskey. Alongside a cup of tea with a few cakes. Passed the time well whilst I snapped some aircraft, including the two BA Airbus A320 seen above alongside the ANA Boeing 777-300, SAS A320-NEO and Virgin Atlantic A330-300. 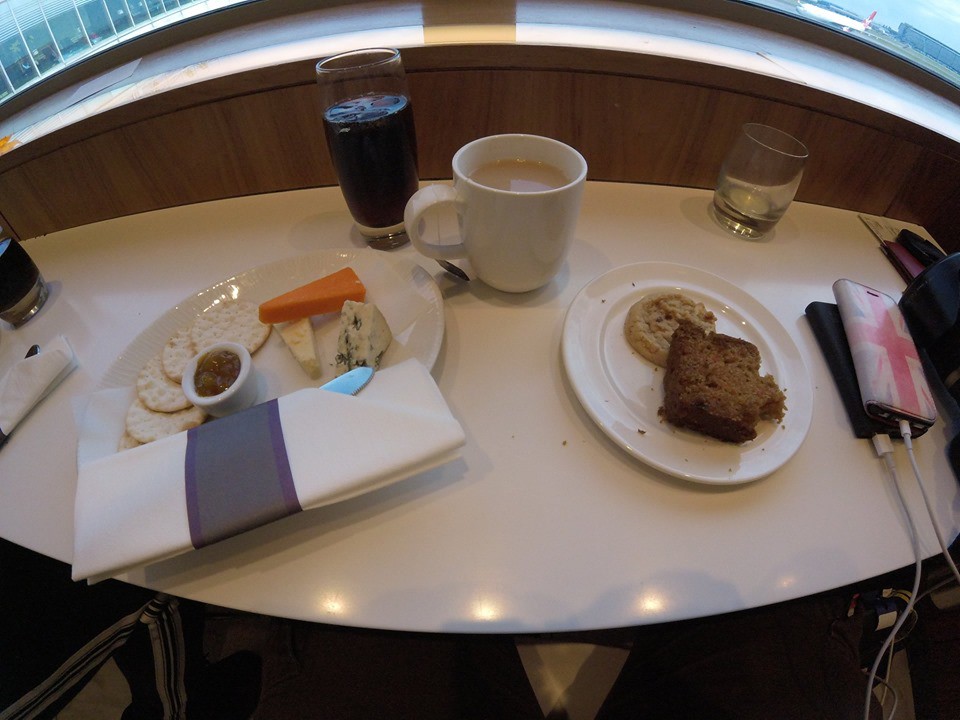 We left the lounge when the gate was announced, after catching OH-LWO landing (picture at start of the article). As the plane was only 2 weeks old, this makes it the youngest aircraft I've ever flown to date!

The Airbus A350 parked up at Gate 32. Departure was scheduled as on time, which is always a great sign! 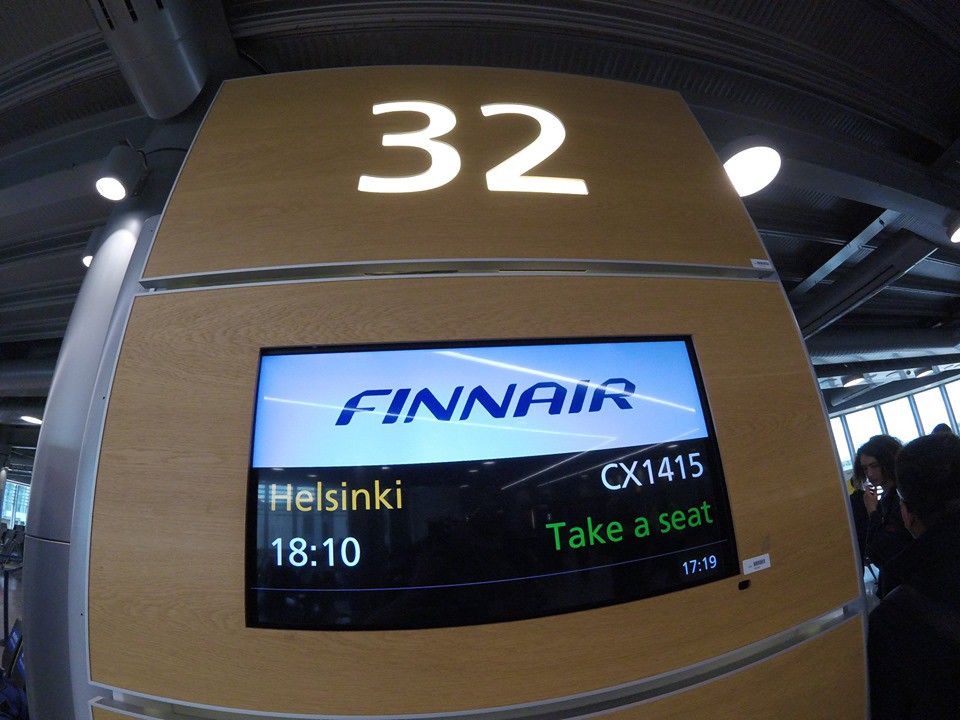 We boarded separately as I was in Group 2 boarding, where as my friend was Group 4. This is an odd find with Finnair, I know I'm priority due to my status, but when two people book together normally I find that my boarding number is used along with the other travellers on my booking, regardless of their status or whether they have a program. Might just be a Finnair policy, either way I think they need to reconsider that, why give me priority if my travel companion has to board in another group?

Ether way, once on the Airbus A350, everything was alright! I am a huge fan of the Finnair A350 cabin & experience! 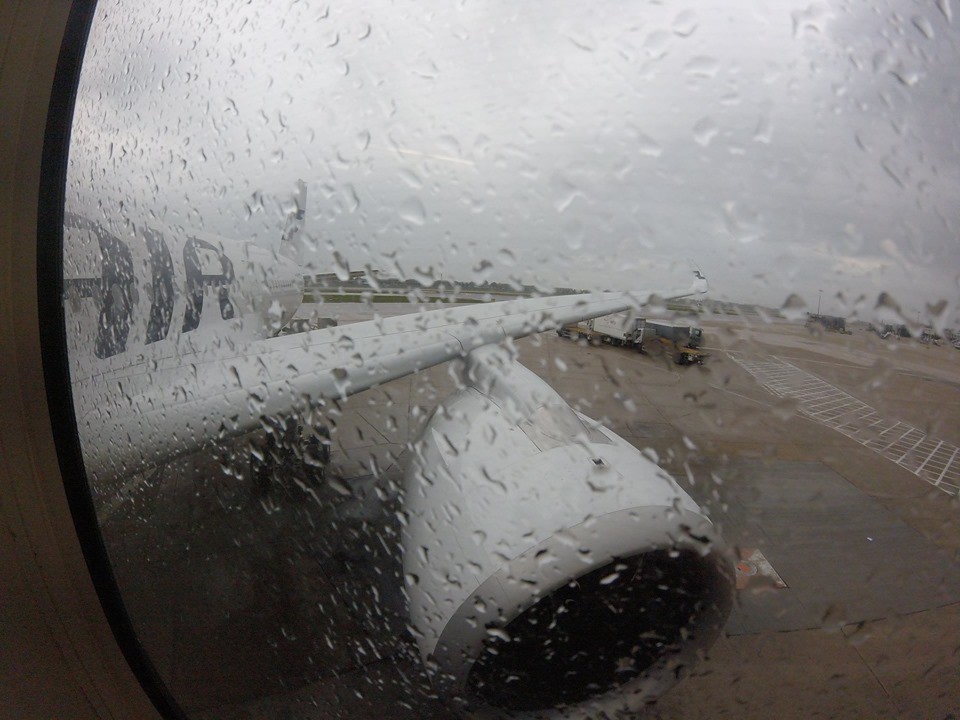 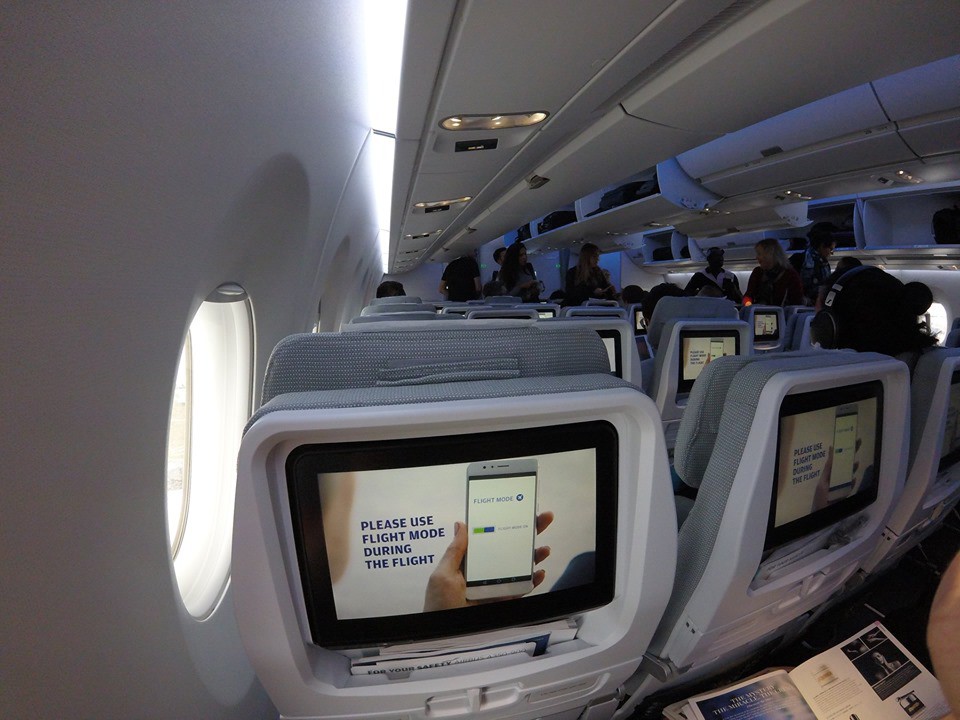 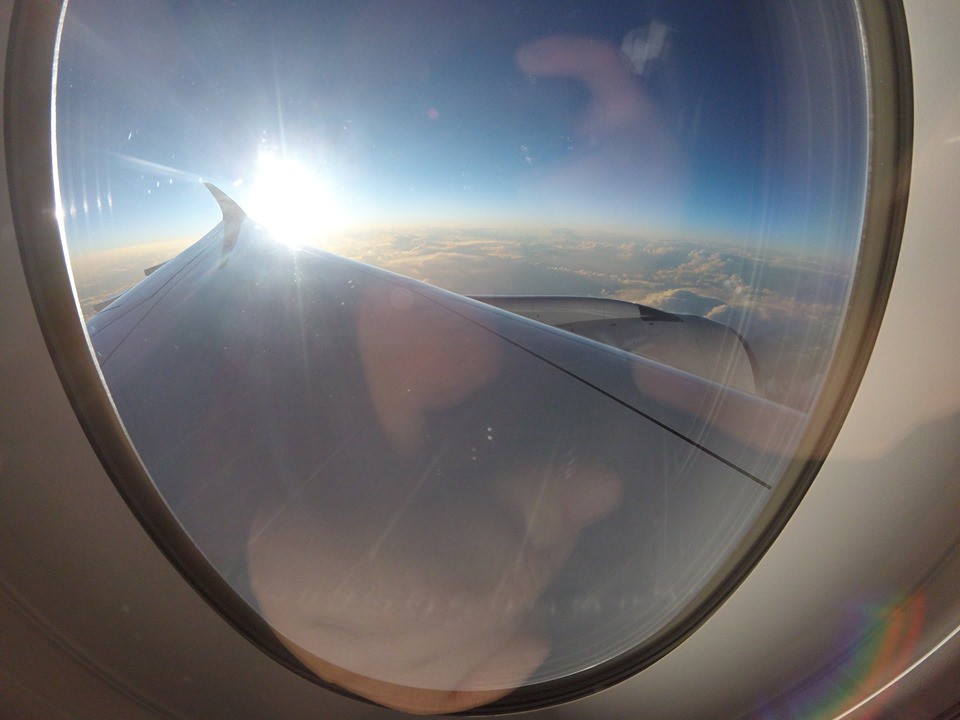 Our plane pushed back and departed about 20 minutes after boarding was complete. We were air borne for Helsinki by 18:30pm.

About an hour went past before the crew got to Row 28 with the services. Finnair (unlike some "Premium Flag Carriers") has a decent hybrid buy on board for their European flights. Free blueberry juice, tea, coffee and water is provided and other drinks (soda & booze) and snacks are at a price. Most quite reasonable for in-flight standards.

I got my free blueberry juice and tea, as well as my pre-ordered sandwich, a reindeer meat flatbread alongside a 6EUR miniature of cognac! 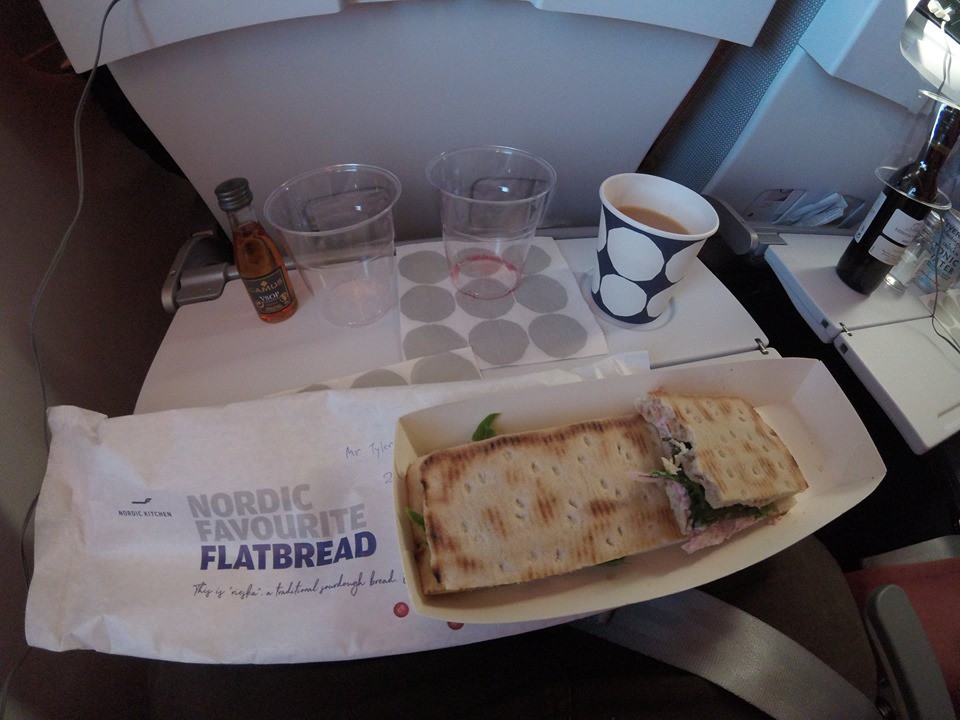 The in-flight entertainment included some new additions since my last trip. One documentary I enjoyed was on the infamous "27 Club" where some big and famous names in Rock succumbed to the dark side of fame at 27. Some big names in the "Club" include Rolling Stones founder Brian Jones (guitar/piano/harmonica/sitar), Alan "Blind Owl" Wilson of Canned Heat (guitar/harmonica/vocals), Kurt Cobain (guitar/vocals) of Nirvana, Doors front man Jim Morrison (vocals), British soul/jazz singer Amy Winehouse and 60's Hippie icon Janis Joplin.

The evening sunset provided some romantic shots of the iconic A350 wing. 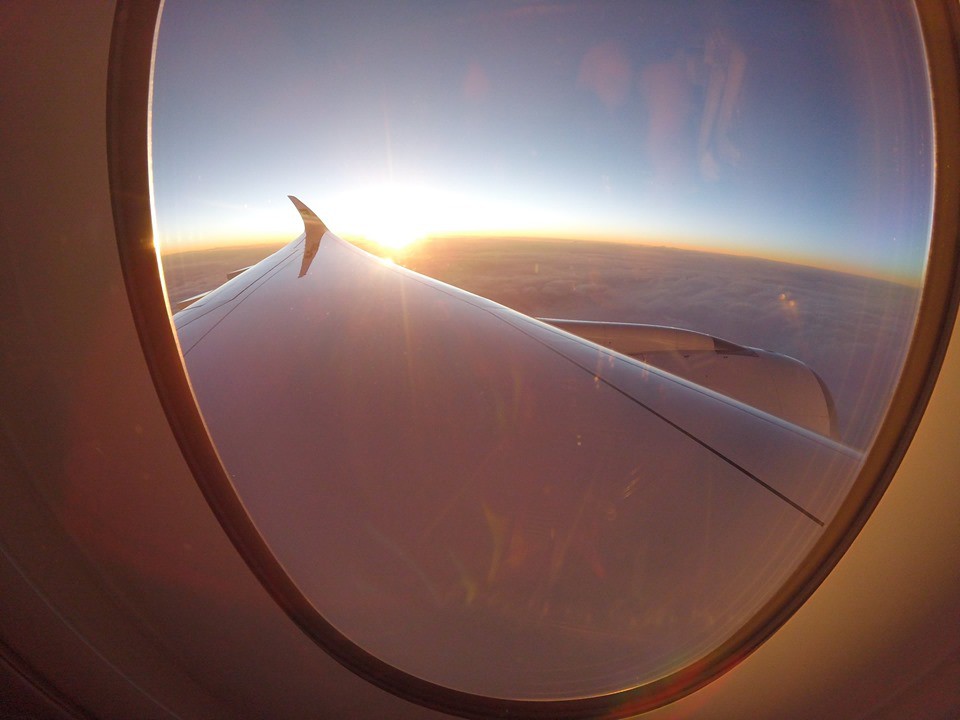 The red tinted mood lighting added to the effects inside the cabin. 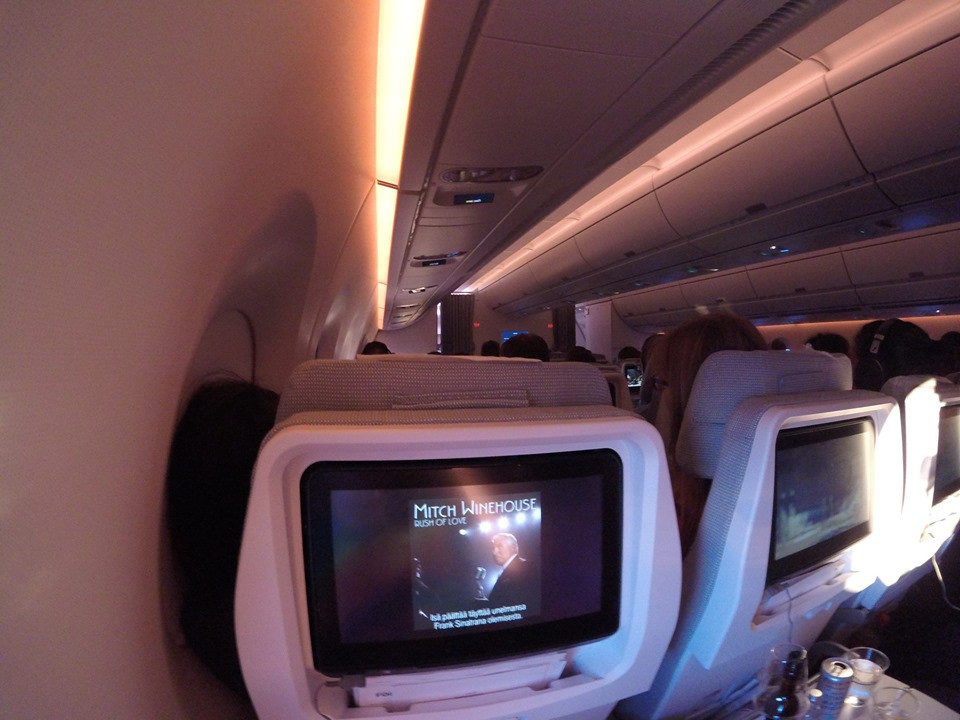 Eventually, the night rose as the sun fell and it was night as we passed Southern Norway and Sweden. We began our decent into Helsinki about 30 minutes away from our destination, wasn't much to see until the landing lights came on as we entered our final approach. 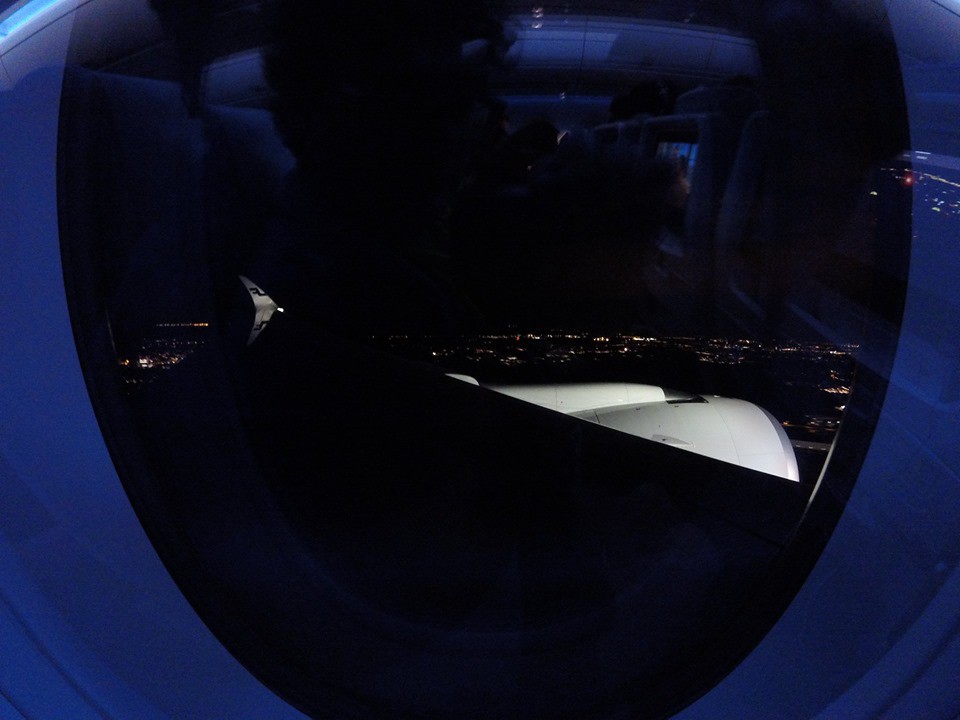 The mood lighting was adjusted back to "Northern Lights" settings in order to adjust us to a night time arrival into Helsinki, before dimming completely for the last five minutes. Once landed, the Aurora Borelios returned into the cabin! 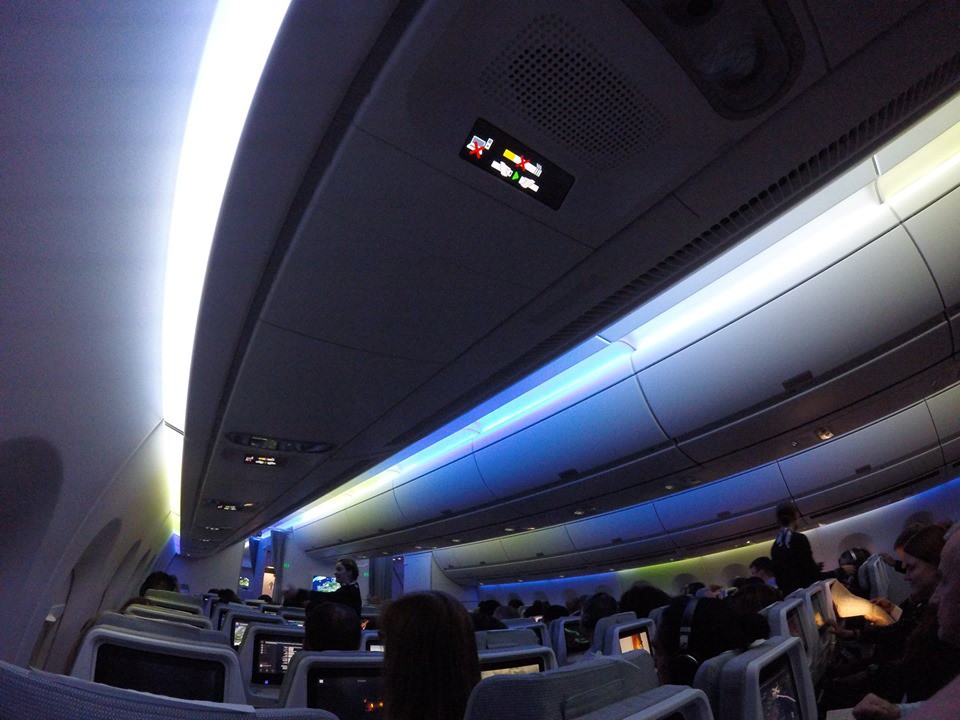 The A350 touched down, watching through both the window and the IFE Screen's tail cam feature, about 15 minutes ahead of schedule, which was made up in the time we taxied to our terminal stand and parked. The plane de-boarded as quick as you could off a fully loaded Airbus A350, and I made a quick visit to the best seat in the house- the flight deck! 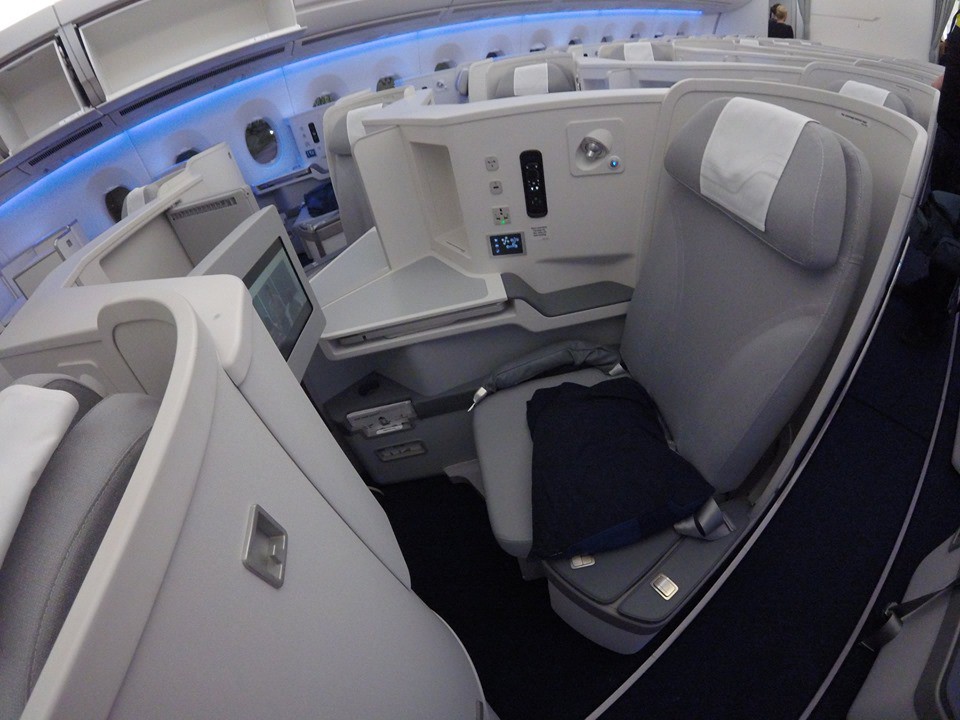 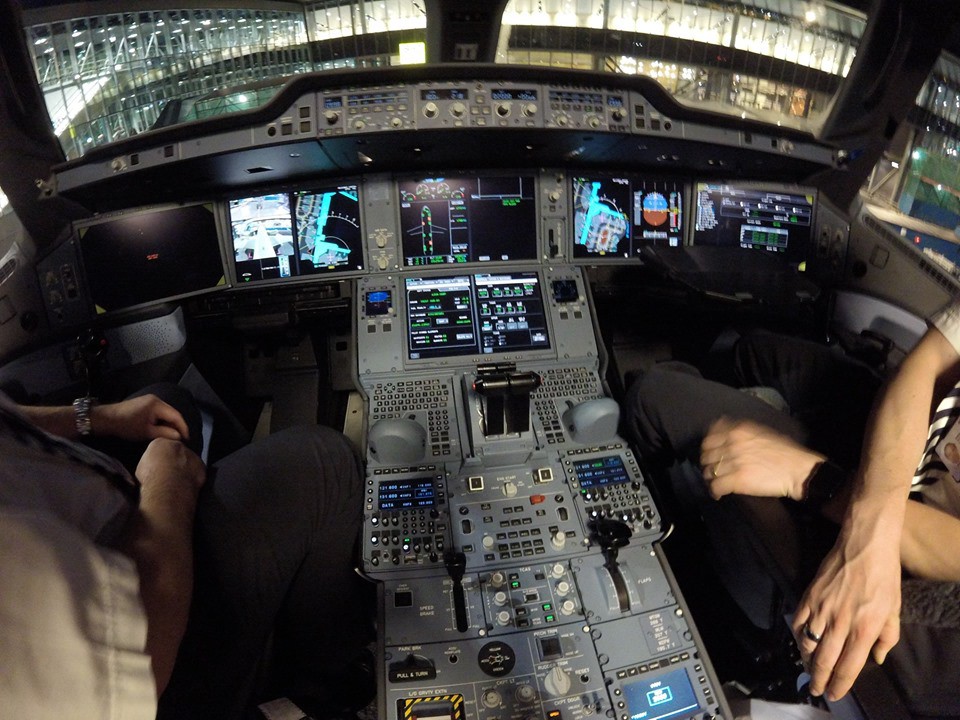 Not wanting to keep the crew after a long afternoon/evening flight, I took my images, thanked them for a wonderful flight experience and left with my mate to spend the evening in Helsinki Vantaa Airport- a bit of a tradition on late night flights for me to sleep in the airport terminal then go to the land side a little later. 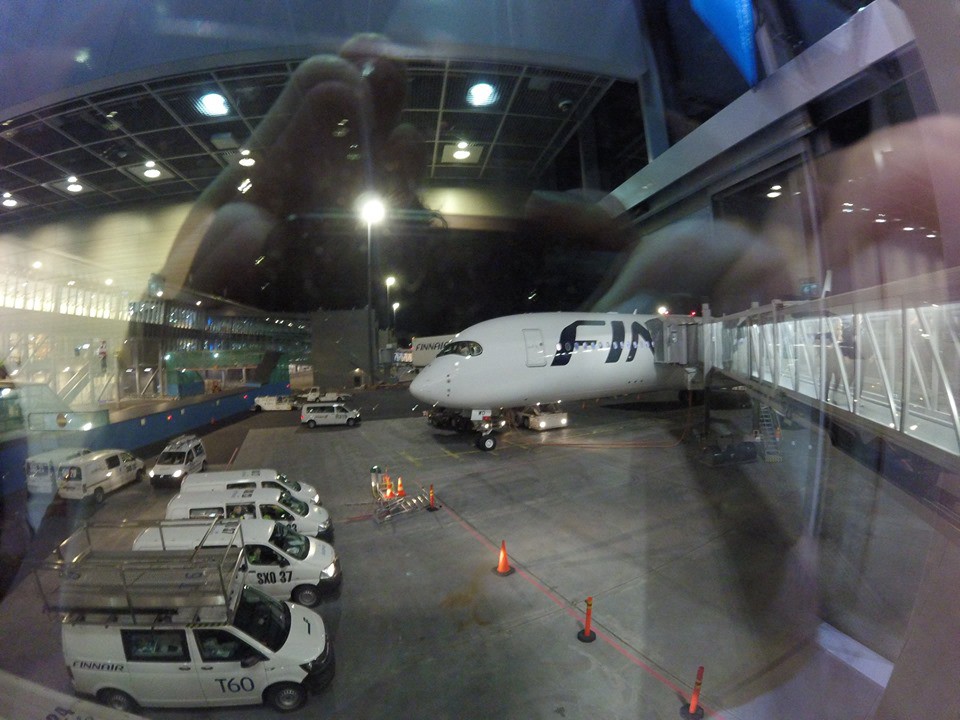 London Heathrow- Very good experience at Terminal 3, even if the building is a little dated compare to its counter parts. Priority security is a brilliant service when you are able to get it, flawless. Some nice views around the airport, but you got to find the windows and hope there is something parked up!

Helsinki Vantaa- The airport has undergone a lot of renovation since my first visit, but it has improved an already good airport drastically. There are comfy seats to be found (if they're free) and there is a restaurant open all night alongside multiple vending machines. Toilets are clean and there are inside smoking chambers for people who vape/smoke like my mate.

Finnair A350- I can only sing praises. Always a lovely pax experience for me on these planes. All though not to impressed with Finnair's boarding policy in this trip's case. Should be the same boarding group in my view if we are booked on the same booking.

NO.1 Lounge- Great service provided. Excellent food/drink options. Amazing view of the airport for spotters, nice shower facilities. At £35 a head for 3 hours, make sure you get to stay for that length of time, makes a great treat, but I wouldn't pay that every time I flew from LHR!

The contributors of Flight-Report published 7 reviews of 1 airlines on the route London (LHR) → Helsinki (HEL).

The airline with the best average rating is Finnair with 7.2/10.

The average flight time is 2 hours and 52 minutes.