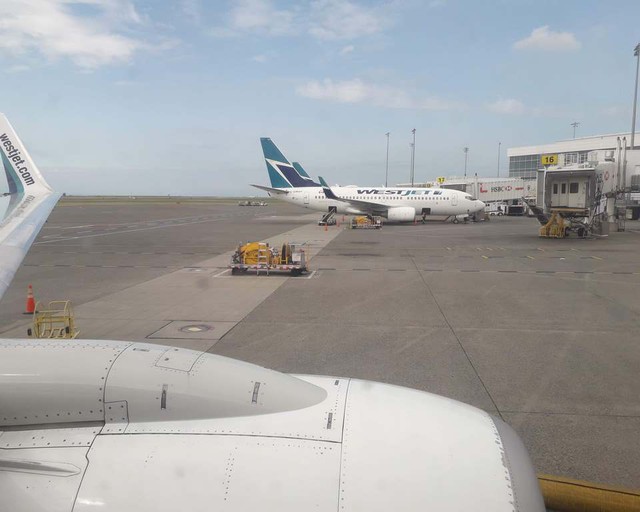 After a few days in Québec for a wedding, we flew Montreal-Vancouver with Air Canada, on the last flight of the day, entirely at night so no report.
It's interesting to note that when booking, AC and WS were at exactly the same price the whole time, around 250EUR. But AC had a better schedule.

We absolutely loved Vancouver City and Vancouver Island, and I definitely recommend visiting it.

To return home, we flew YVR-YYZ-CDG which was much cheaper than the direct AF flight YVR-CDG, and enabled me to try out WestJet.

To check in I had to use the WS website which recognized my AF PNR.

We were assigned 7A & 7B which suited me just fine, forward of the wing.
However 737 have a misaligned window in front of the wing, on the 737-700, seatguru showed this was on row 9 on most Airlines, and did not mention anything about WS, of course with the Plus section having extra legroom, the windowless row ended up being row 7 :-(

No views on the Canadian Prairies as I wished!

We got to YVR about 2 hours before departure, and went to the domestic part of the terminal, passing an entire zone of check in for various Chinese destinations on various Chinese Airlines.

We were assisted at the kiosk by a very friendly lady who chatted with us about our trip and her previous trip to France.
A great first impression of WS by this employee!

Before going through security we went to the observation deck, which had nice views on the domestic part of the terminal. 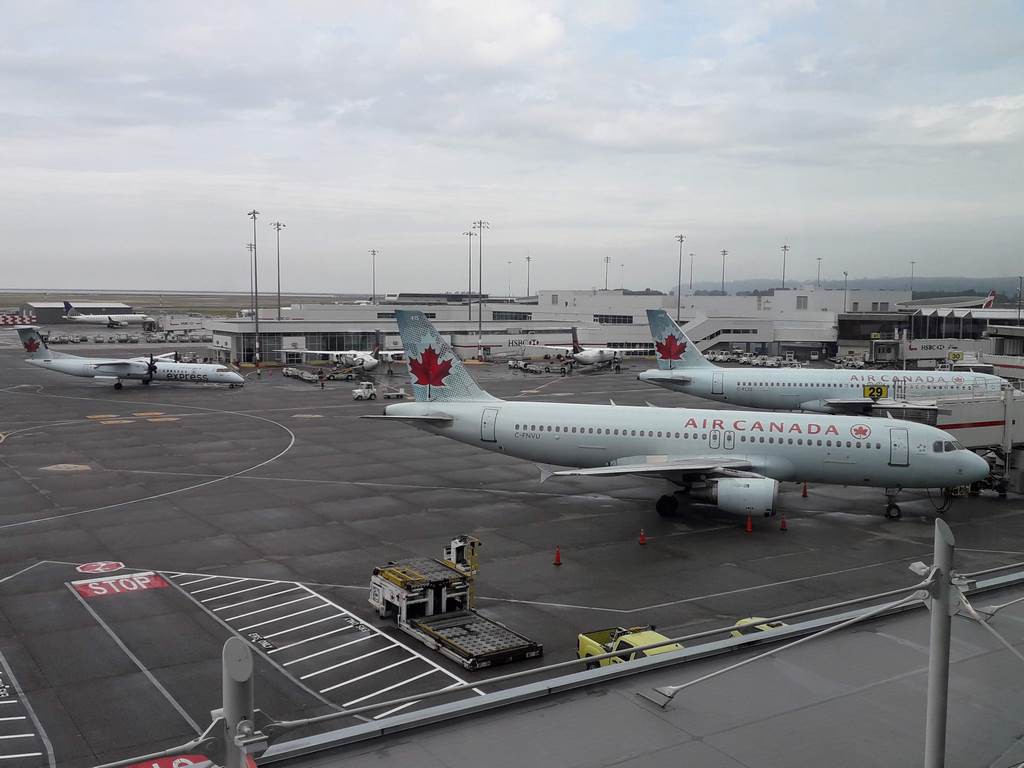 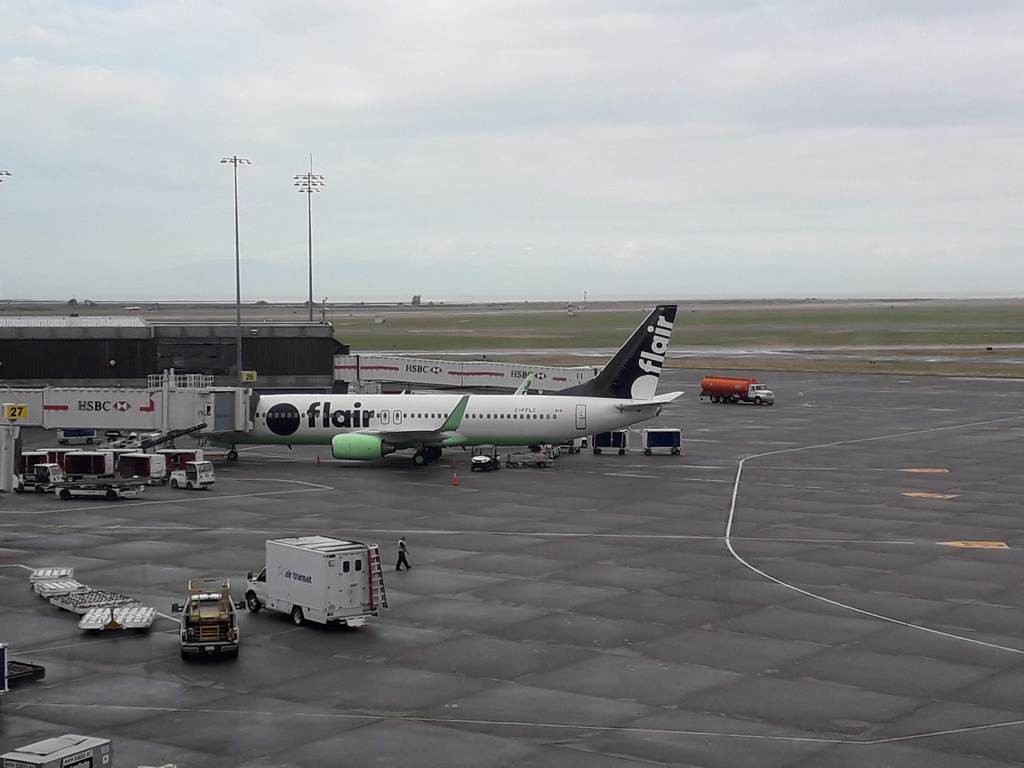 Then we proceeded through security, I got held for a random test for explosives on the hands and in my bag. At first I was frustrated about it but it turned out, taking that test granted access to the fast track. So in the end, this extra screening made us go through much quicker than if we had waited in line.

YVR is really nice, quiet and with an original decor focusing on native American things as you can see on the poles below. 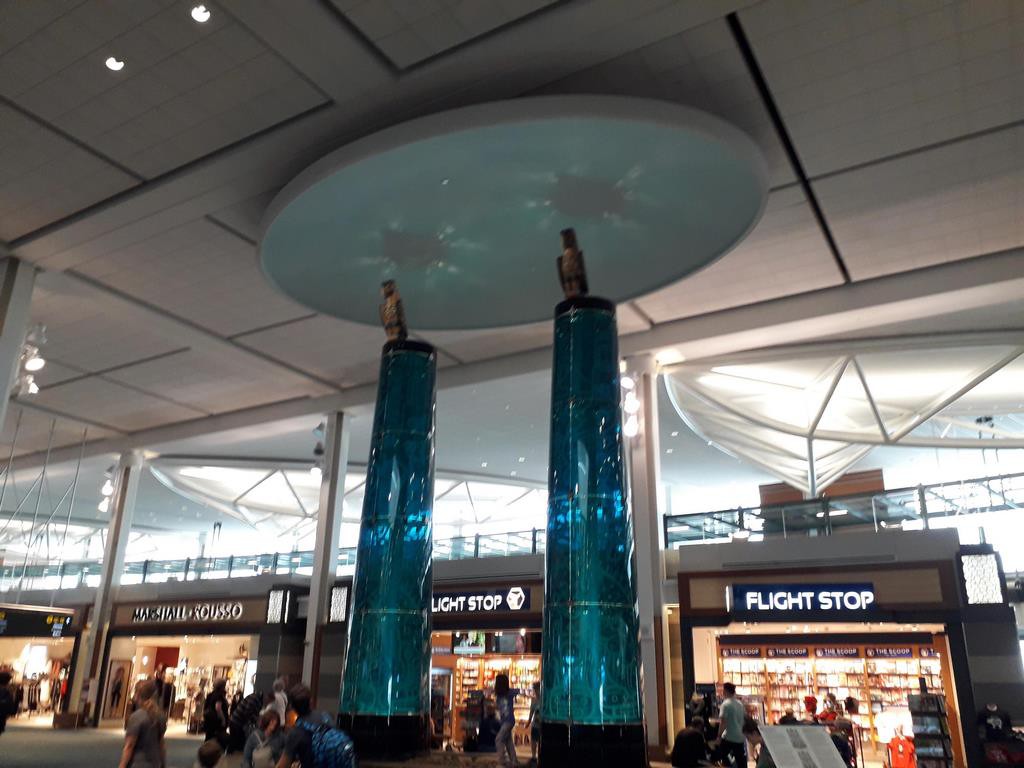 We had about an hour left before boarding, I took advantage of the WiFi to download the WestJet app to make sure I'd have some entertainment during the flight as WS only offers PDE streaming and no screens on their 737.

Our plane arriving from YUL about 30 minutes late. 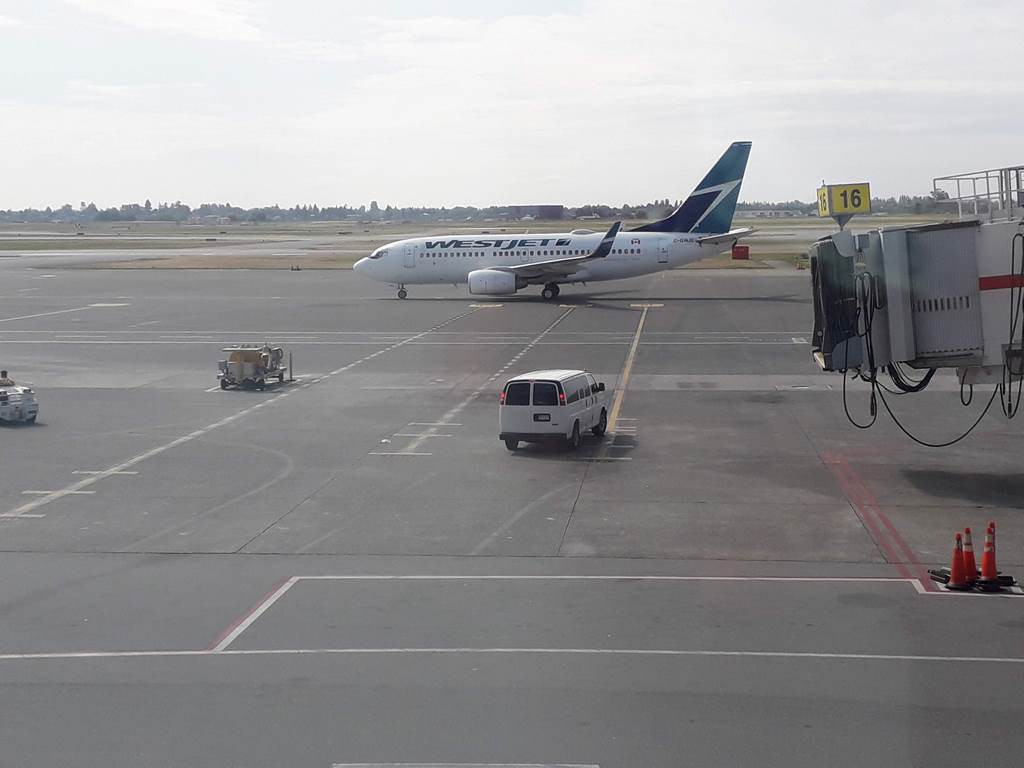 With the late arrival, the gate agent made a very detailed and friendly announcement on the boarding process, and how it would be nice if everyone followed the process in order to gain time and leave ASAP.
Once again a very good behaviour from a WestJet ground agent.
We boarded with the last passengers in Group 4 but could still find some room for our cabin bags.
We received a basic welcome on board from the FA.

I was really disappointed when I got to row 7 to realize it was THE only row missing a window.
Though leaning forward I could still get a partial view 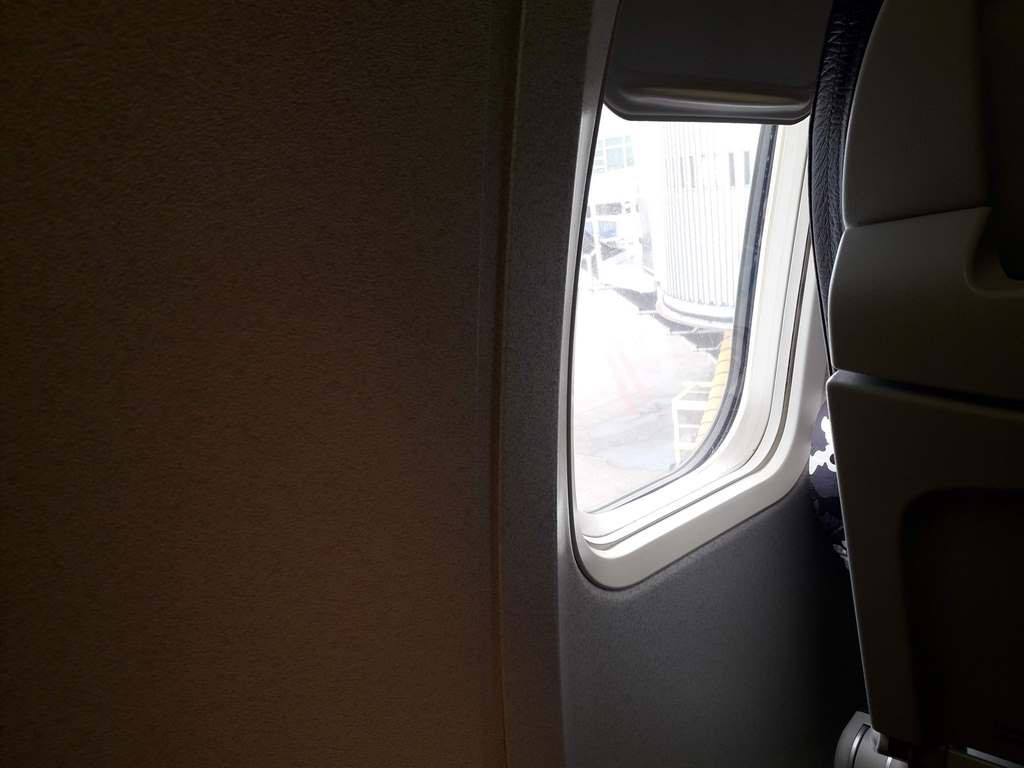 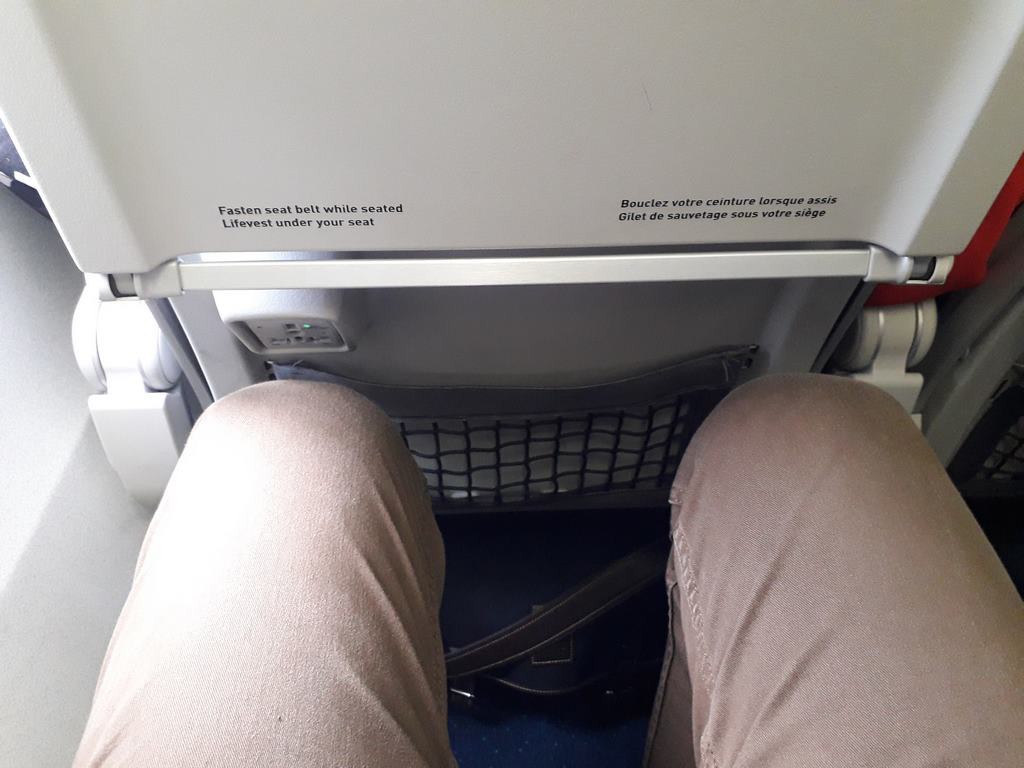 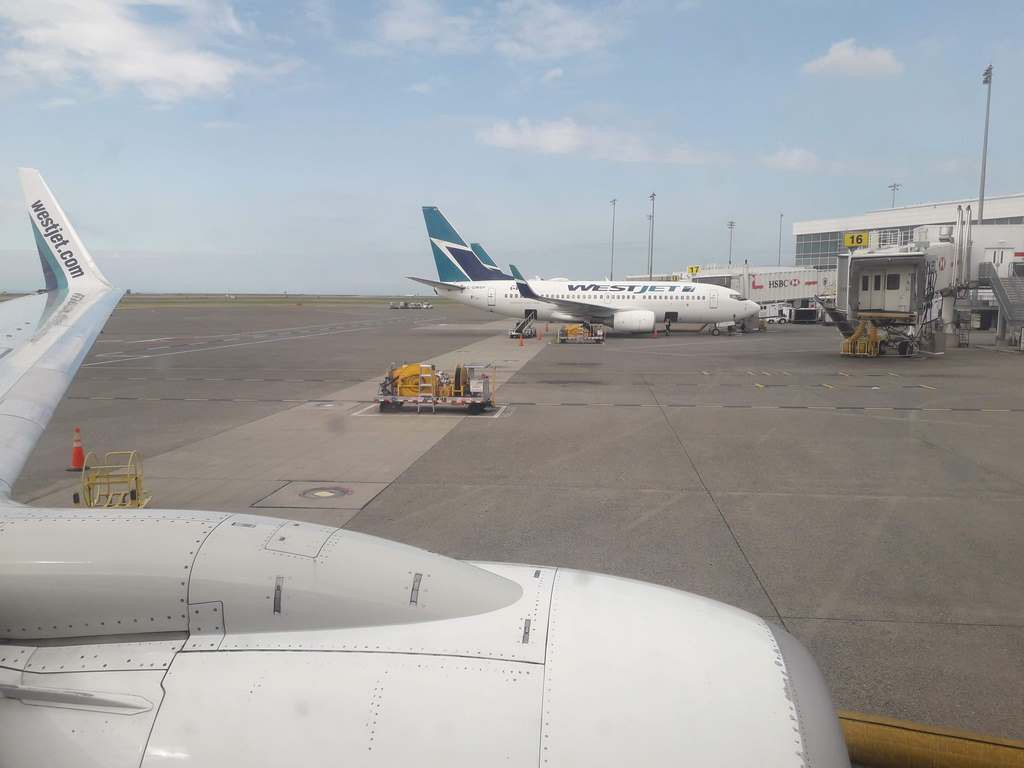 We pushed back soon enough, captain announced our flight time as only 3H50, so we'd be on time in YYZ

About to take off and followed by others 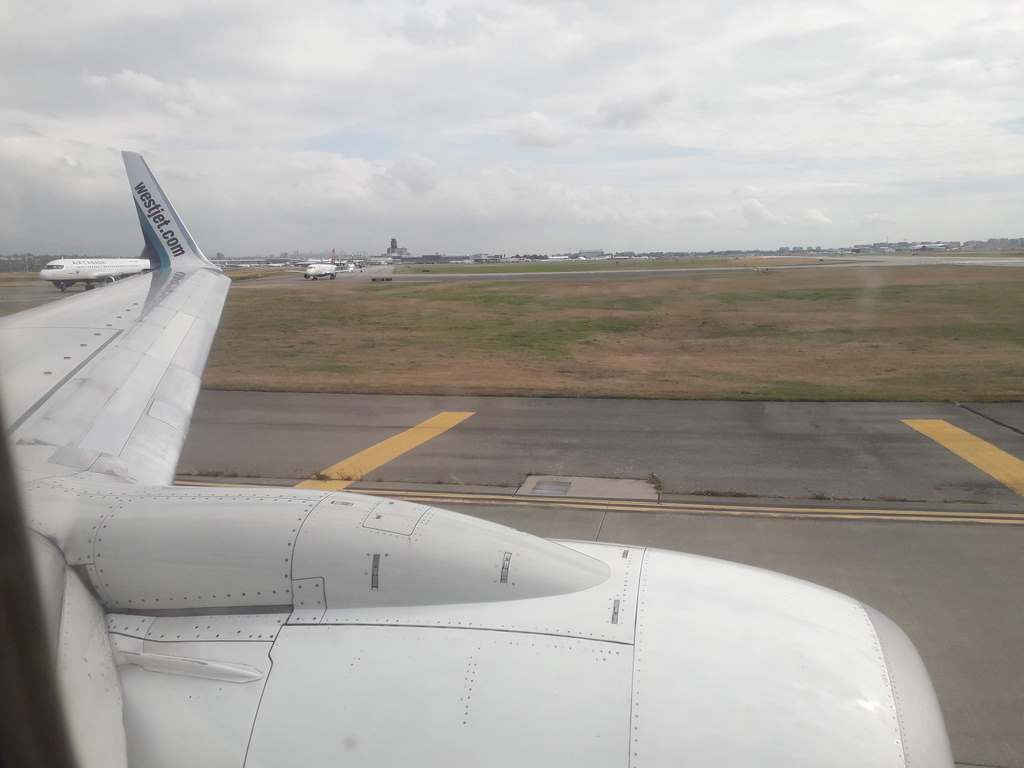 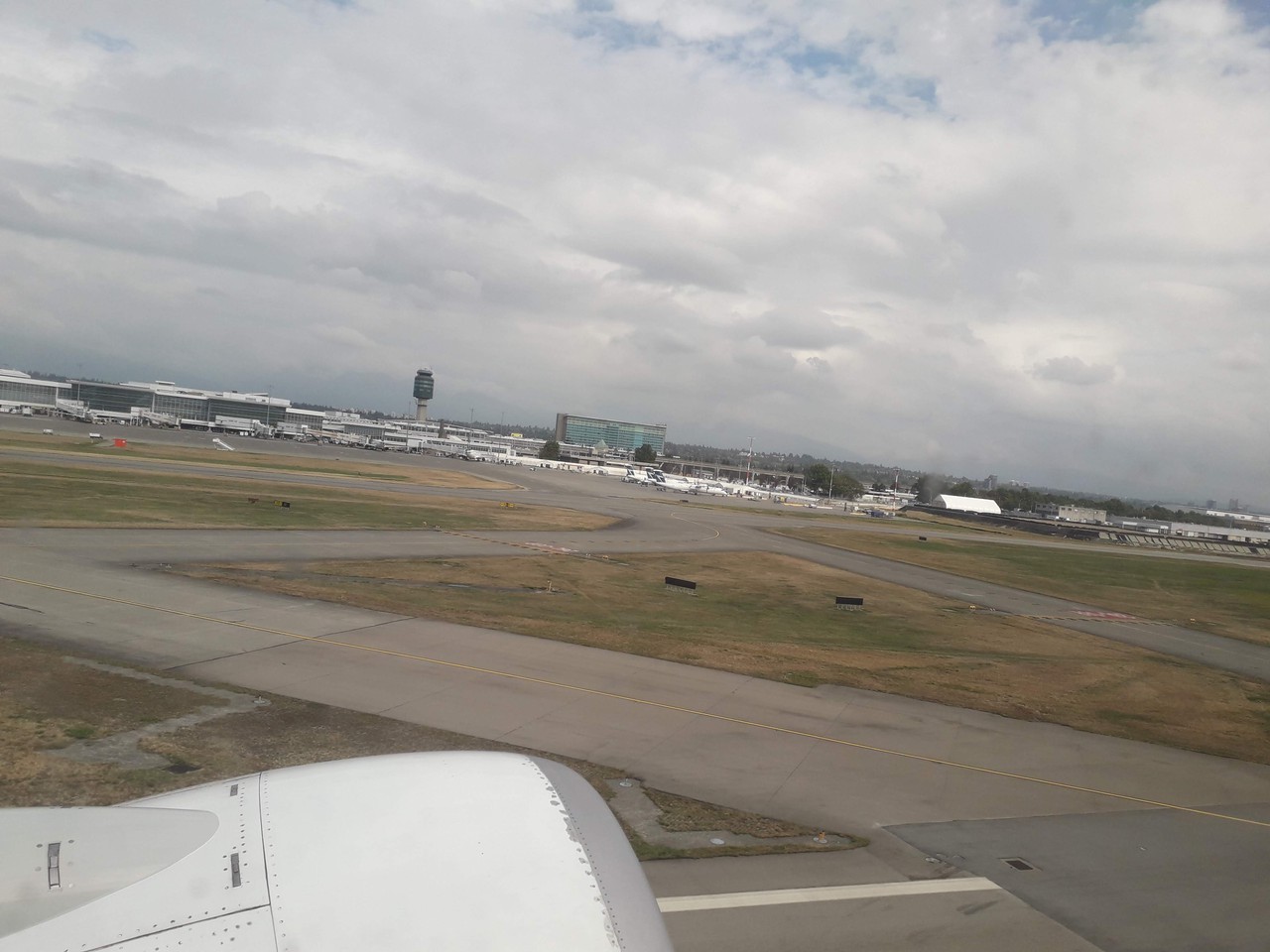 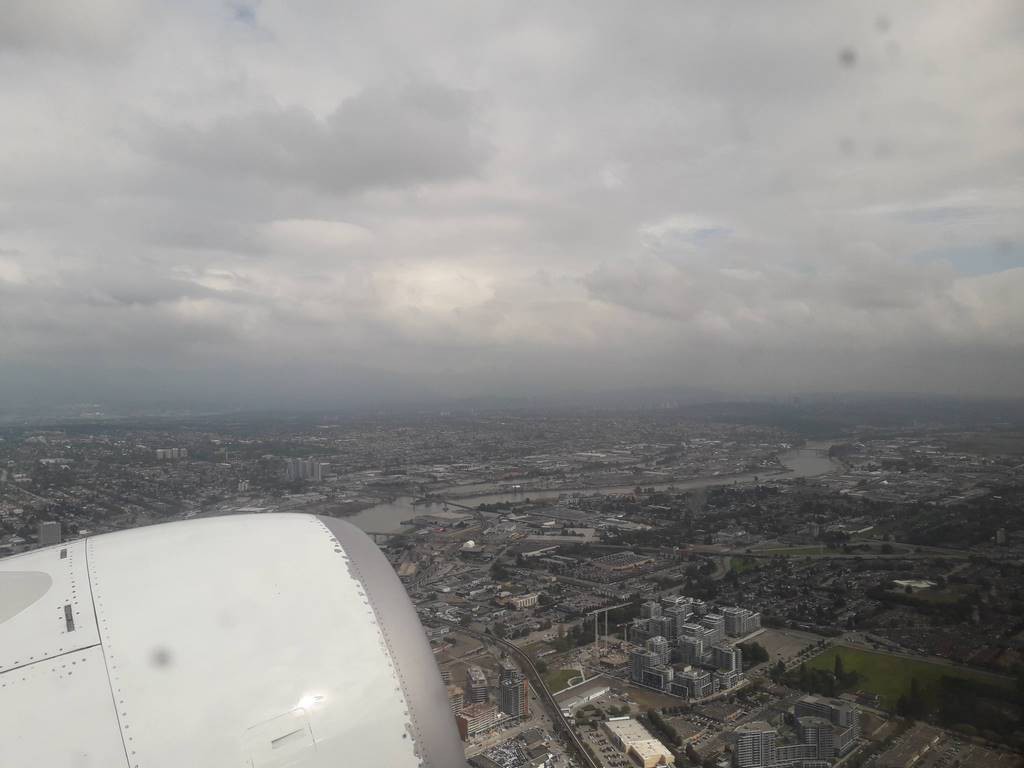 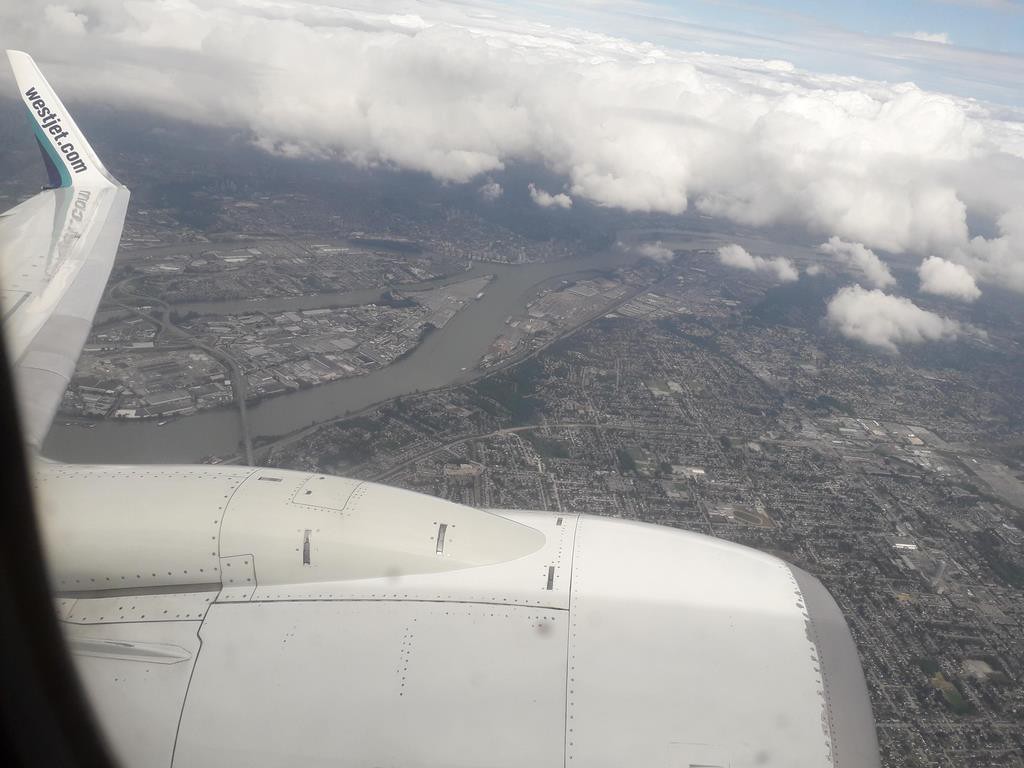 Service started 20 minutes after take off, soft drinks and Biscoff cookies/Pretzels are complimentary. The rest has to be paid for.

The BoB did not offer a very wide selection and was more expensive than AC.

I had coffee and a tomato juice. 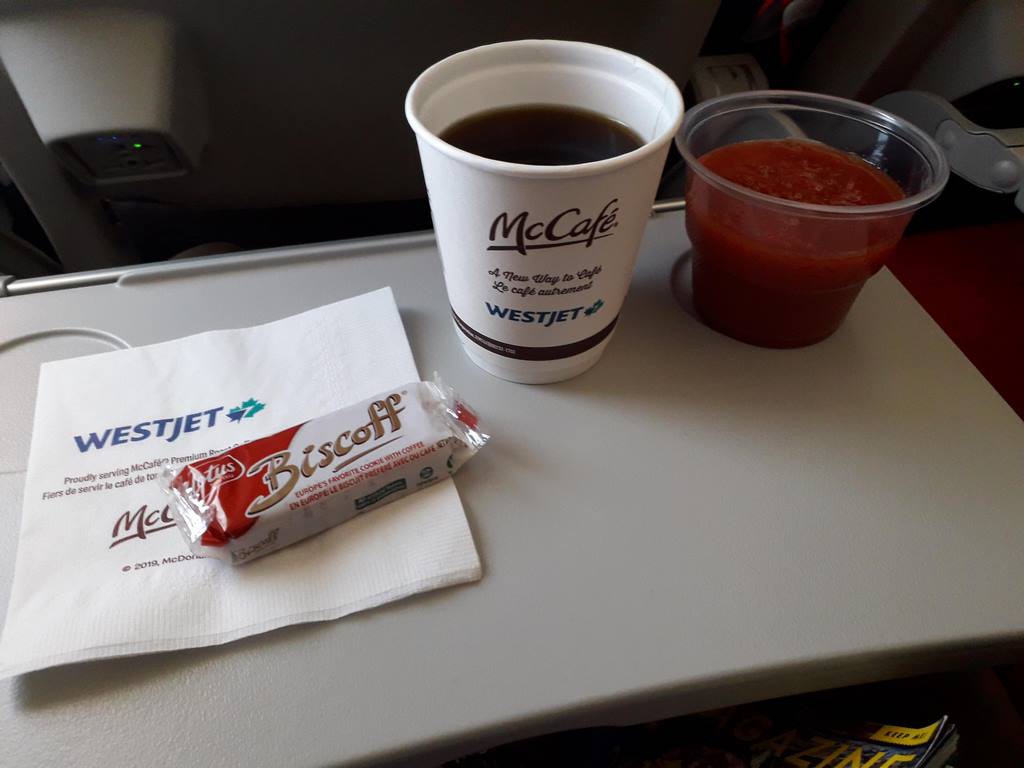 A cabin shot, with the Plus section in the first 4 rows but no divider.

In Plus, the middle seat was blocked, the legroom is better and they had a full lunch as well as a pre arrival snack. 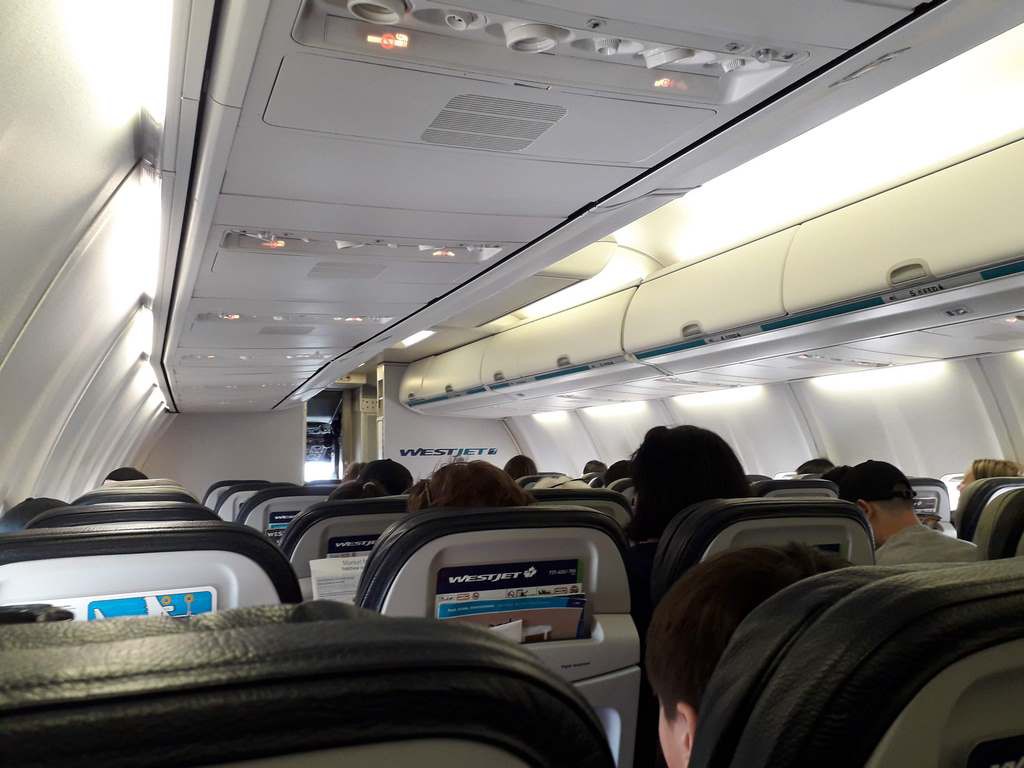 The WestJet app did offer a decent selection of movies and series, as well as a moving map.
It's just not convenient to watch something on your phone when you nothing to hold it. 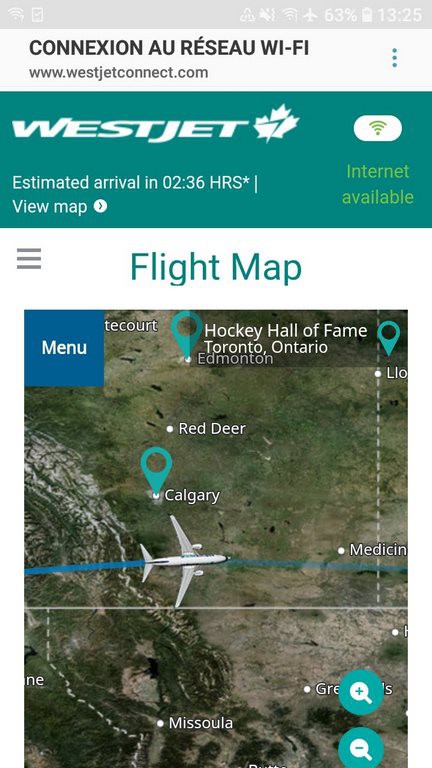 The sky was cloudy most of the flight, so I didn't miss as much as I thought by almost not having a window. 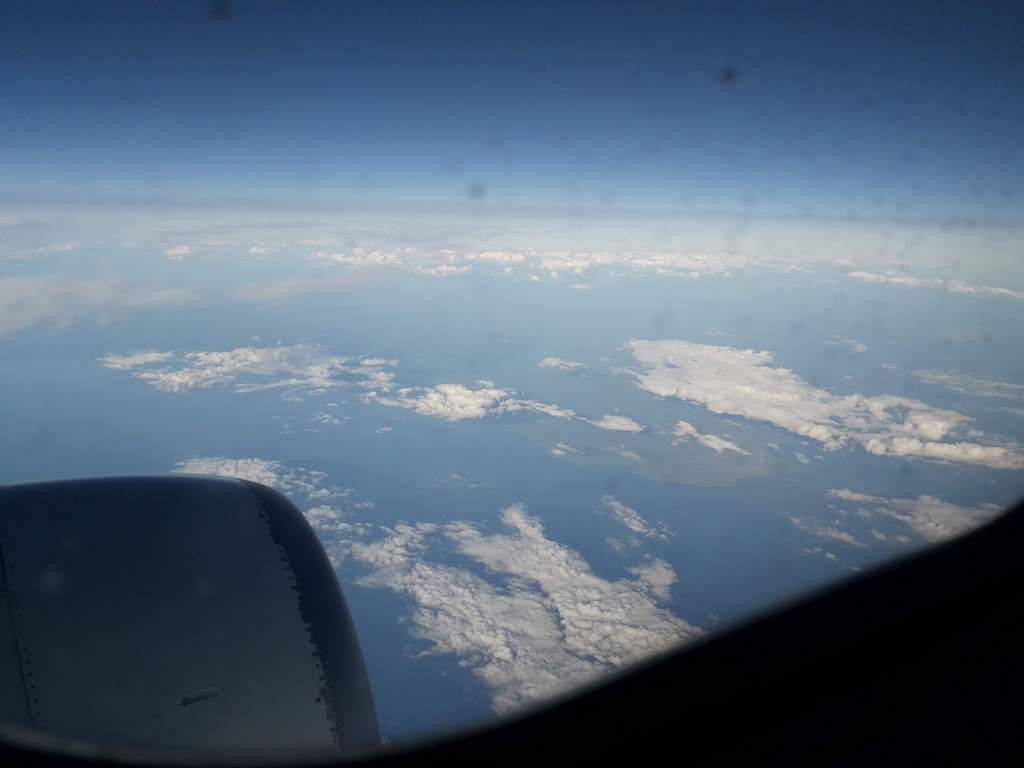 About an houer before landing, we got a second beverage service.
I got a ginger ale this time.
Overall I didn't find the WS very friendly, they did the job and disappeared between the two services.
Not a lot of smiles and no interactions beyond "what would you like to drink?"
Too bad they weren't as good as the ground crew. 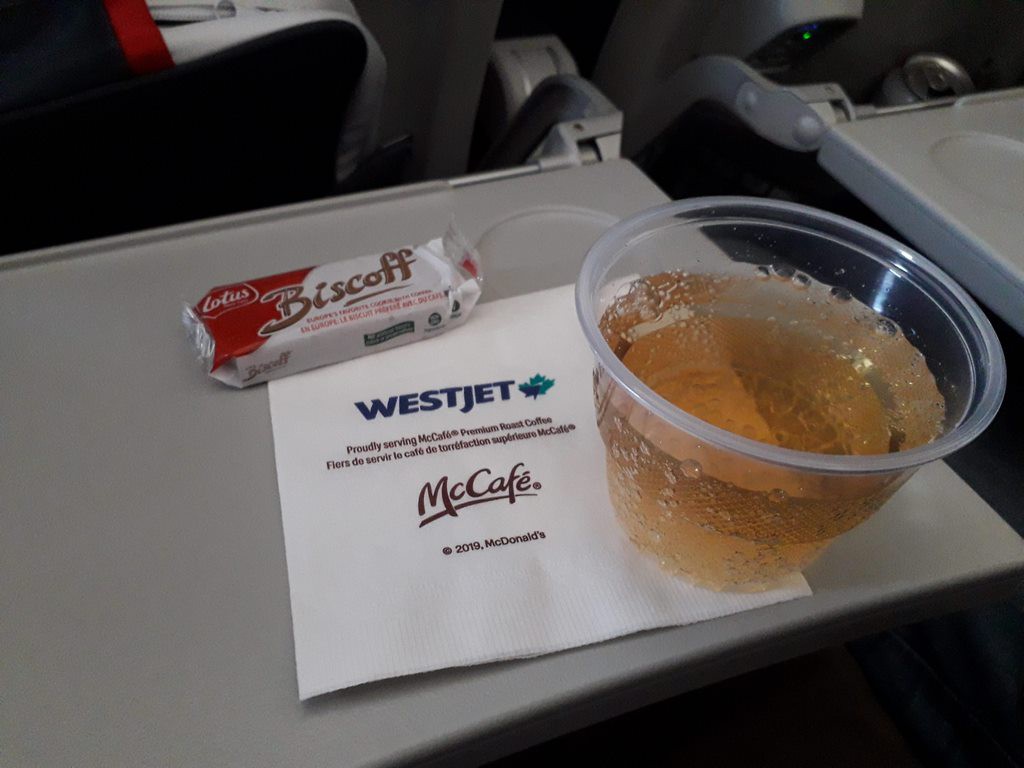 We then started our descent to Toronto Pearson, I was hoping to see the CN Tower but we did not do the right approach for that I guess. 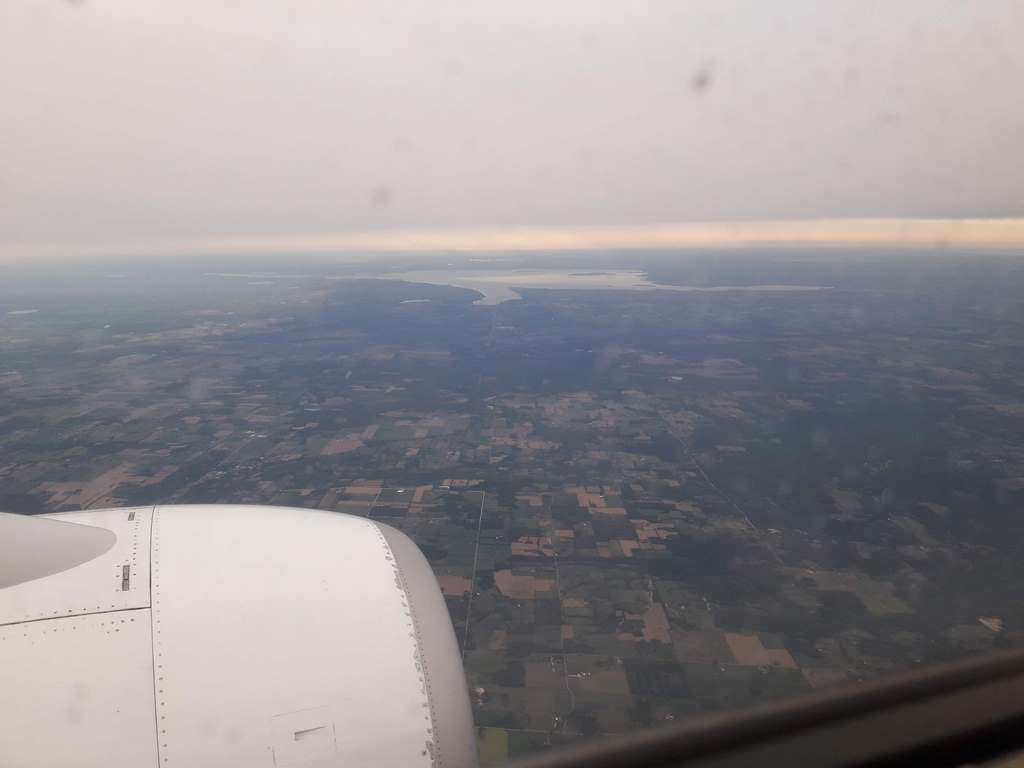 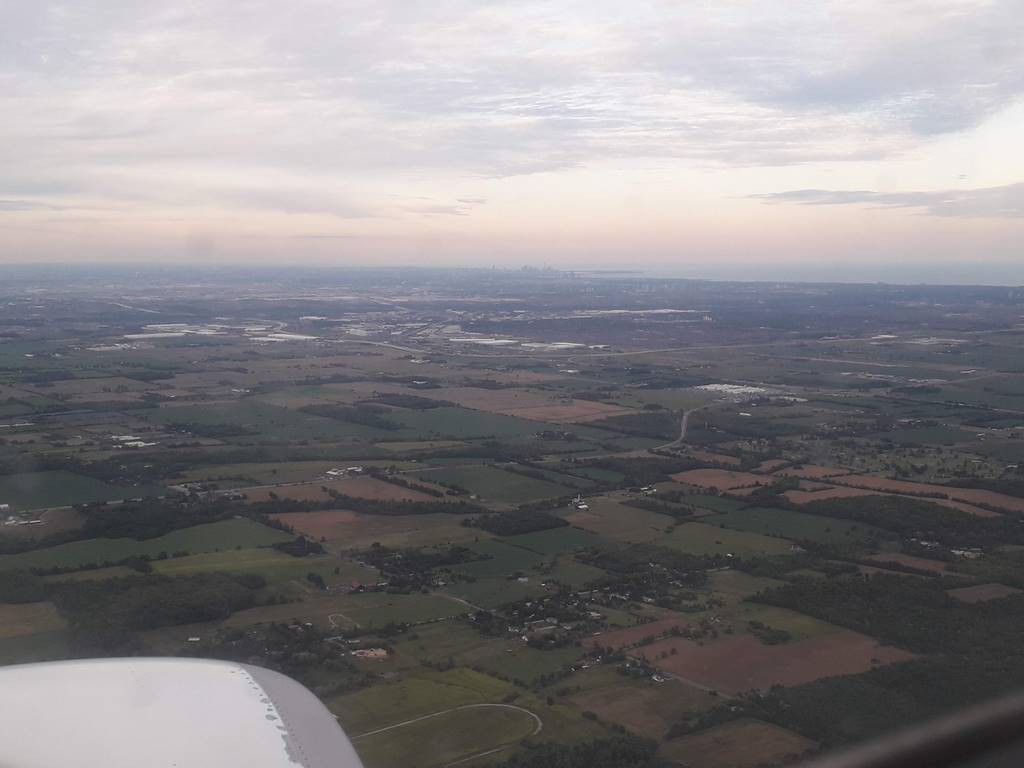 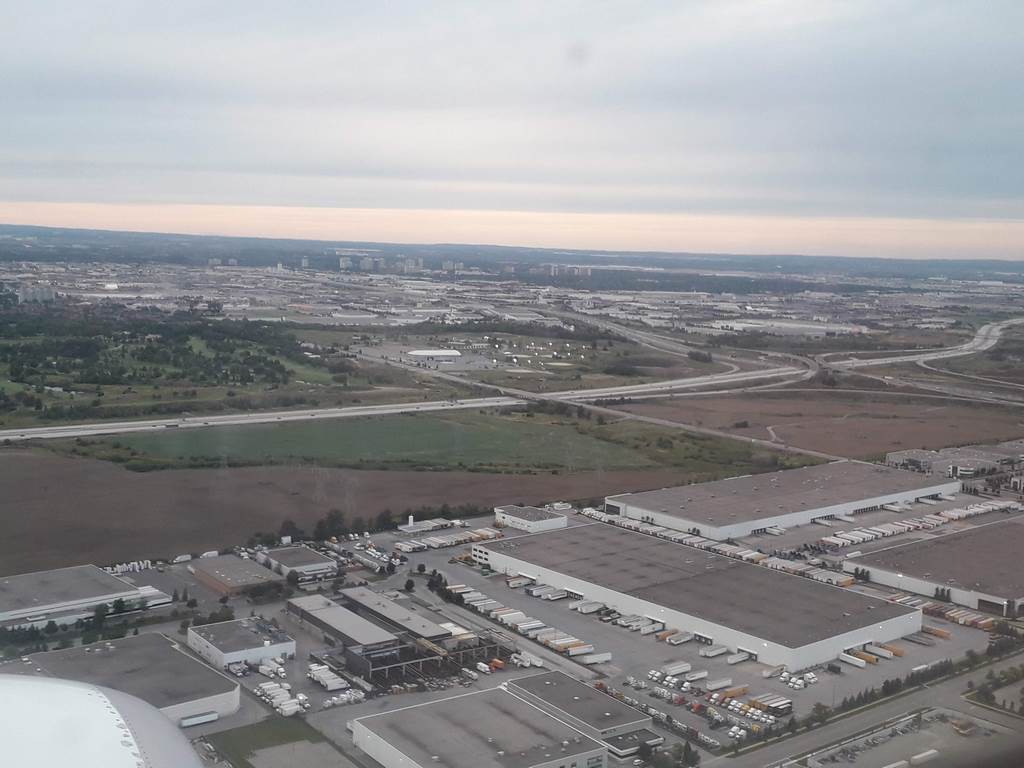 And we gently landed, slightly ahead of schedule. 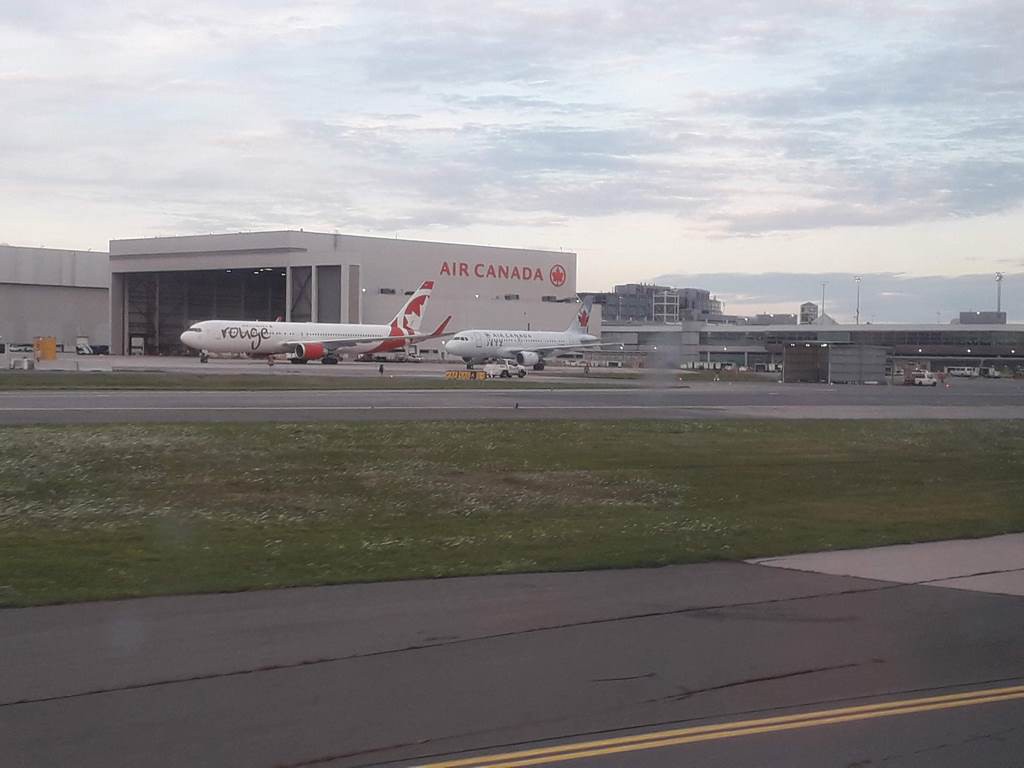 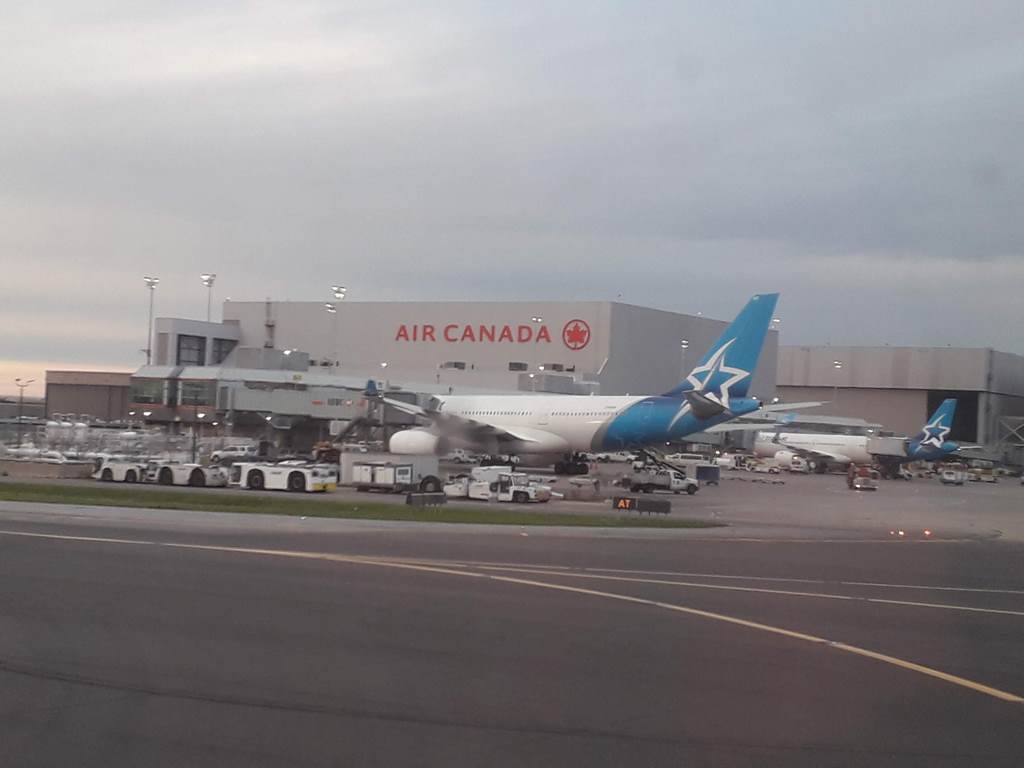 We ended up parking right next to that A330, that would later be departing for Manchester .
Seems like TS borrowed an engine cowling from AC… 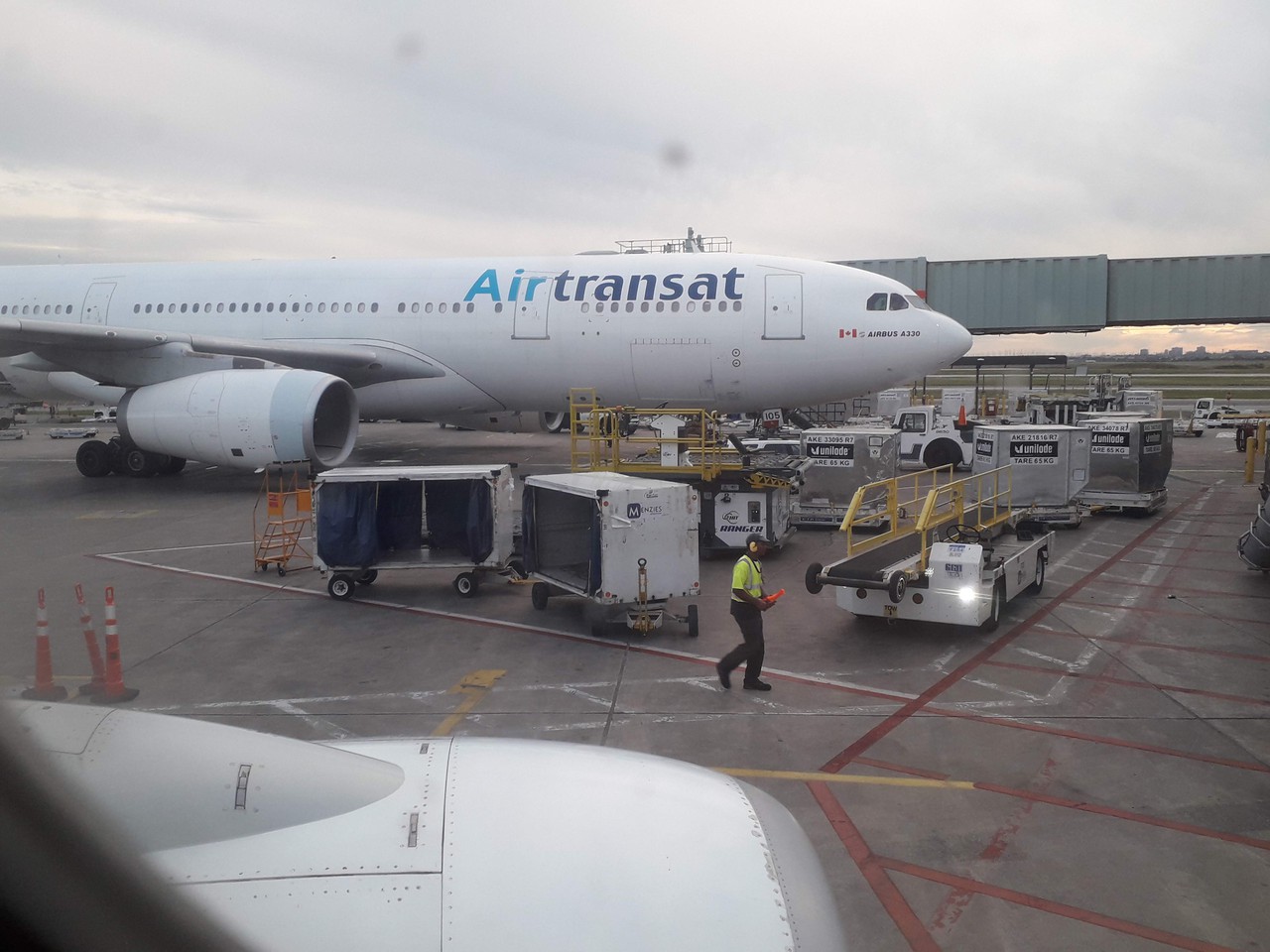 We quickly disembarked with a polite "have a good night" from the crew.

I found WestJet is nothing special.
Since they're a younger airline than AC, created to shake the market, I expected the service to be more customer friendly, a bit like jetBlue, but no.
The crew reminded me of basic UA crews, there was no screen and I only watched one movie as I was tired of having to hold my phone.

I'm glad I tried them, but I would fly them again only if they're cheaper than AC.

The contributors of Flight-Report published 13 reviews of 2 airlines on the route Vancouver (YVR) → Toronto (YYZ).

The average flight time is 4 hours and 14 minutes.