By marathon SILVER 3201
Published on 25th August 2013
This is an archive report of a memorable flight which I took before Flight Report was created.

Thirteen kilometers south of Tian'anmen lies the purgatory of Beijing air travel: Nanyuan airport. Only travelers with frightening karmic debt end up there.
The warning in my usually flawless expat’s guide to Beijing (Insider’s Guide to Beijing) was clear enough, but the urge for getting outside the beaten path was too strong. I was not disappointed.

Nanyuan Airport, true to its name (South Garden) is indeed south of Beijing, in the vicinity of the infamous neighborhood of Laosanyu. The vicinities of the domestic and international airports of Paris are not that pleasant either, but they are not former air force bases. Nanyuan is one, and China United Airlines is also a former military company.

Let’s go a few decades back. In the good old times, all air traffic in China was handled by the military (this is still the case, and explains why the Chinese airspace is so constrained and poorly managed), and operated by CAAC (rumored to mean Cancel At Any Cost), a mildly civilian branch of the air force. It was the time cherished by the gods where there were no air disasters in China, since they were military secrets. Apart from the crash where Lin Biao died, fleeing to Mongolia possibly after a failed coup attempt. Then there was the economic opening of China, including the opening of the skies to competition, and a number of provinces and private investors launched their own airlines. CAAC, with a reputation to make a manager of Soviet era Aeroflot shudder, renamed itself into China United Airlines, still operated by the military, serving in particular places where the only landing strip was that of an air base.

One day, the Chinese equivalent of the FAA told the Air force to stop doing business and get rid of that UFO. CUA became independent, but to this day is the only company serving Nanyuan airport, and other rather exotic places, such as Erdos in Inner Mongolia (That mining city is famous here to have been created from scratch without addressing the issue of which jobs would the hundreds of thousands of projected inhabitants have. This is a rare case of a ghost town which never lived). Company culture dies hard, and the quality of service is said to be the reference zero of the scale.

CUA also has a daily flight to and from Chengdu, and after the end of a month on a construction site there, I decided to have a trial flight on CUA, on flight KN2927, departing at 09:55 from Chengdu. At least, that is what is claimed in their schedule. At the boarding gate, the flight was announced late (that’s usual in Chinese airports), but some travelers were noisier than usual and I went to enquire. Flight KN2927 to Beijing Nanyuan is delayed due to a mechanical problem with the aircraft. Thank you for waiting in the boarding room for further information Getting information in that ruckus was no easy task, especially since the staff spoke no English, but I eventually understood that the aircraft had a problem and meiyou departure time. Meiyou (没有) = "There is not" is the first expression that you learn in survival Chinese. After much waiting, a blind passenger was eventually guided away from the boarding gate by an employee, who motioned me to follow suit, and in fact all twenty or so passengers who had not disappeared yet did the same. We crossed the security check backwards, and boarded a minibus. I briefly hoped that we were being brought to the remote Terminal 1, but no, the minibus left the airport area, went around the runways and eventually stopped in front of an ordinary hotel in an ordinary suburb. Box lunches quickly arrived, the same rather unsavory kind that had fed me during my nights in Chengdu the previous weeks. Could it be that we are going to spend the night here and take tomorrows flight? No, our luggage did not reappear (Actually, the fate of my checked luggage was a good reason not to buy another ticket on Air China ), but CUA has rented rooms so that we could wait in a better environment than a boarding gate. The rooms are actually extremely quiet, and the only missing item is an internet connection, but I had just received a call for proposals to be addressed as a priority, enough work for the afternoon. Note that yellow is banned in this hotel. (For mysterious reasons, the color yellow designates pornography in Chinese; it is here a euphemism for prostitution )

In the middle of the afternoon, temporary occupants of the neighboring rooms leave them (We’ll try to get some news) and I follow them to be safe. Not much news, only that we’ll leave at 8pm. Was it the minibus or the plane? I did not understand very well, but the second hypothesis proved to be the correct one.

The blind man had been taken by an employee to some unknown destination, but in the meantime I had befriended a couple and the woman’s mother, despite the difficulty of communication, because their accent in Mandarin was so difficult to decipher. Small wonder: they were from the south of China, the very south, the extreme south: Xishuangbanna is that remote tropical region of Yunnan, bordering Burma and Lao, where minorities are the majority.

The old woman actually wore the traditional dress which I had correctly identified as such, and in particular this high black headdress of the Hani minority that was going to be quite useful. This respectable old lady walked somewhat slowly, went outside only briefly to get some fresh air, and was easy to spot at a distance. I was mostly anxious not to be left behind after misunderstanding some crucial information, and made sure to stay close to her at all times, since she was taken in charge by that couple who appeared to handle the situation with calm. It was not very comfortable, since a group of female passengers killed time by talking very loud, but I was playing it safe.
The minibus left shortly after 8pm, and we made it back to the same boarding gate, where I kept two steps away from the lady with the black headdress. At the counter, we had to fill in our full name and seat number on a form… to justify the 200 yuan which were given to each passenger at the gate, as a compensation for the delay. Of course, the aircraft is not at contact. In the foreground, a passenger prematurely sends a short message of the OK, now we are leaving kind. CUA’s plane must have had a serious mechanical problem, because CUA had chartered an aircraft from China Eastern, whose flight attendants would be that of CUA. In this kind of situation, you cannot be too picky, and the Boeing 737-800 registered B-5473 was not the best of China Eastern’s fleet. That day, it was even the worst one, because after waiting for half an hour for air traffic control reasons, the plane taxied fifty meters… and stopped under the guidance of ground staff.

Another half hour, the reason was given: that plane too had a mechanical problem, and thank you for your understanding. They indeed started working inside the left reactor, a French-US made CFM (CFM, the power of flight according to the logo). Same cause, same passengers, and same tone which rose to new heights inside the aircraft (Reminder: there are five tones in Mandarin, including a high tone that some Chinese women can bring to higher frequencies and decibels than any Westerner). From their probable age, the crew had obviously been recruited after the time of CAAC, and valiantly handled a tricky situation. The steward went up the aisle to dialogue with a remarkably soft and unwavering voice with the angriest passengers. This female flight attendant, with textbook accent in Mandarin (a welcome change from the Sichuanese I had been talking to for two weeks) finishes the job with a textbook smile on the theme “we are responsible for your safety; we cannot take chances on this matter”. The passengers eventually calm down; the flight attendants who usually do not like being photographed turn a blind eye that time, and only ask politely to the man from Yunnan to stop his video camera. There in the foreground, he looks at the film of his adventures with Mom-in–law. The repair is eventually completed, and the flight attendants go through the aircraft to ask each passenger to show his boarding pass, tick another list… and give another 200 yuan for the additional delay (This sets the delay hourly rate at 30 yuan, for those who envy this unexpected cash income). A shot at the winglet before the hood of the reactor is closed. 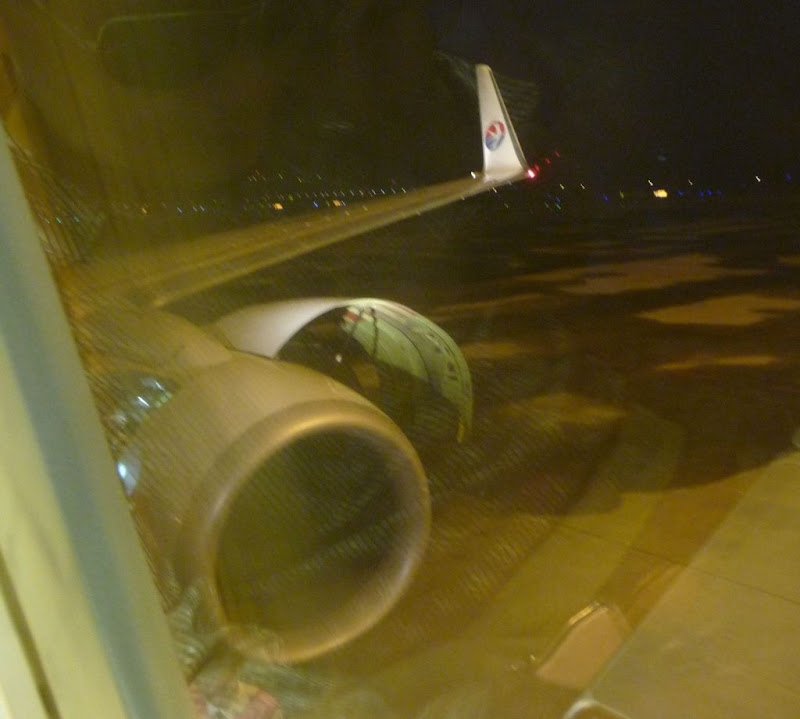 And at long last, at 00:09, which means 13 hours and 14 minutes late, flight KN2927 takes off from the runway of Chengdu's ShuangLiu airport. The flight itself is exceptionally bland, the purser does all the usual safety announcements, including the pitch for CUA's frequent flyer program and finishes with We hope to see you again soon . I wonder how many passengers obligingly chose CUA soon afterwards.

Only at 2:26 am did I eventually see for the first time a CUA aircraft, and even three of them, which meant half of the airline fleet at that time. I was not to see one before two years later, on the tarmac of URC, another Chinese airport patronized by few Westerners.

My luggage was delivered three minutes later, and the shuttle buses were waiting in front of the small terminal. It was well after 3 am when I reached my apartment in Beijing, some 19 hours after checking out from the hotel in Chengdu. I don't know what I did in my previous life, but I think I purged a sizable portion of my bad karma on that trip alone.

Note that it could have been even worse : boarding of flight CZ6402 to Shenyang had not started at 22:00. 2nd note : 400 RMB compensation is roughly 30 RMB per hour of wait, half the price of the plane ticket, or nearly half the monthly pay of a non qualified worker in a city.

Rating the food and services of China United (or the lounge, or CTU's services) was a difficult exercise. On one hand, this hotel and the food were light years away from any business class lounge, in the wrong direction. On the other hand, how many airlines rent day use hotel rooms for economy class travelers stranded by a dramatically delayed aircraft?

Similarly, NAY is poorly accessible remote airport. But when you land at 2:26 am, traffic congestion is nil, and the taxi fares in Beijing are so cheap that you can reasonably do without the shuttle bus.

If you read this FR to the end, you know that you belong to one of two categories:
- That of my Chinese language teacher at the time, to whom I of course told this adventure, and who thanked me for the warning, because she had been tempted by CUA's low fares.
- That of Nowhere China travelers, who are being sent to construction sites in China's backwaters and ask for more, and never lose an opportunity to leave the beaten track.