#58 out of 113 Airlines A minimum of 10 flight-reports within the past two years is required to appear in the rankings. 211 reviews

By marathon SILVER 4702
Published on 29th August 2013
Even though the flight predates the creation of Flight Report, this is not really an archive report. I took pictures (much fewer than I do now) in order to post a report on a different website. Later, I adapted it slightly to FR's format
here : http://flight-report.com/fr/report-101.html, and then translated here from my native French.

I knew well PEK's Terminal 2, where the only international flights were those of Skyteam (therefore those operated by Air France), of Vietnam Airlines and China Eastern (which were to join Skyteam) and of North Korea's Air Koryo, a founding member of the EU's black list, which is not anywhere close to join Skyteam. T2 is in good condition, but it nevertheless shows its age from small details, like for instance the lack of space for the security check which is a tight fit between immigration control and the airside duty-free shops.

Check-in, immigration and security control were done with in record time (it's a low activity time of the day), with negligible waiting at each step, and very few steps between each of them. A bonus point to the immigration officer, a smiling man in his fifties who beckoned to me from a distance.

The lounge was deserted – small wonder since there is another lounge for the Skyteam flights, with only an American family whose somewhat turbulent children could not be a real nuisance, since there was so much space. Self use PCs with internet access, comfortable armchairs, an office area which allowed me to settle down and work. 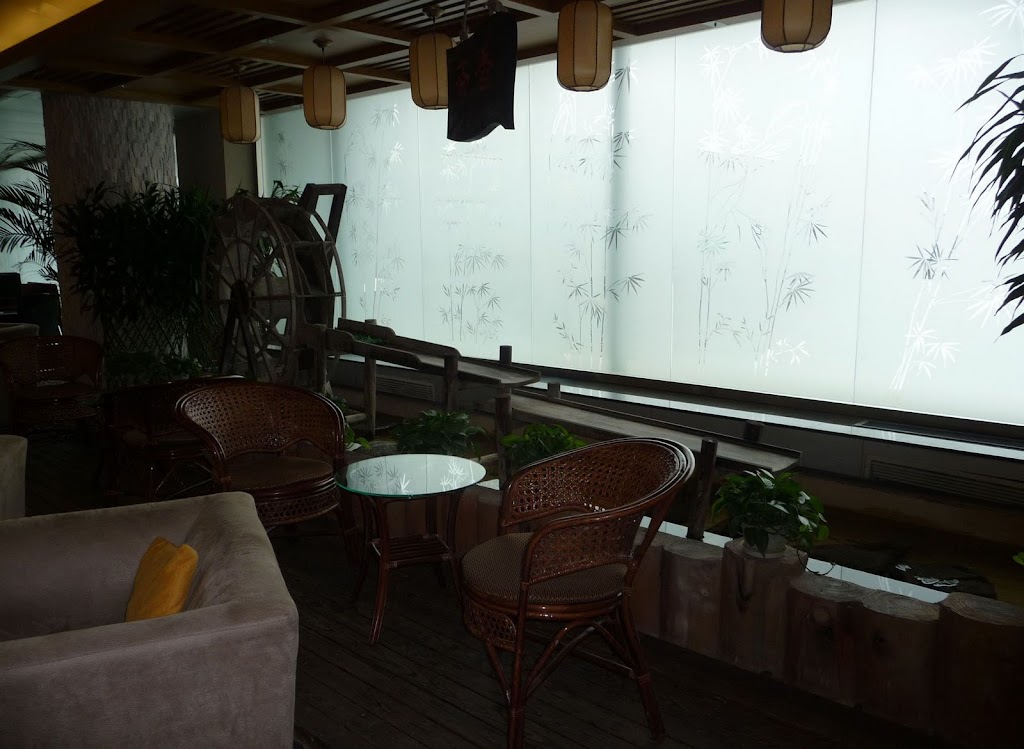 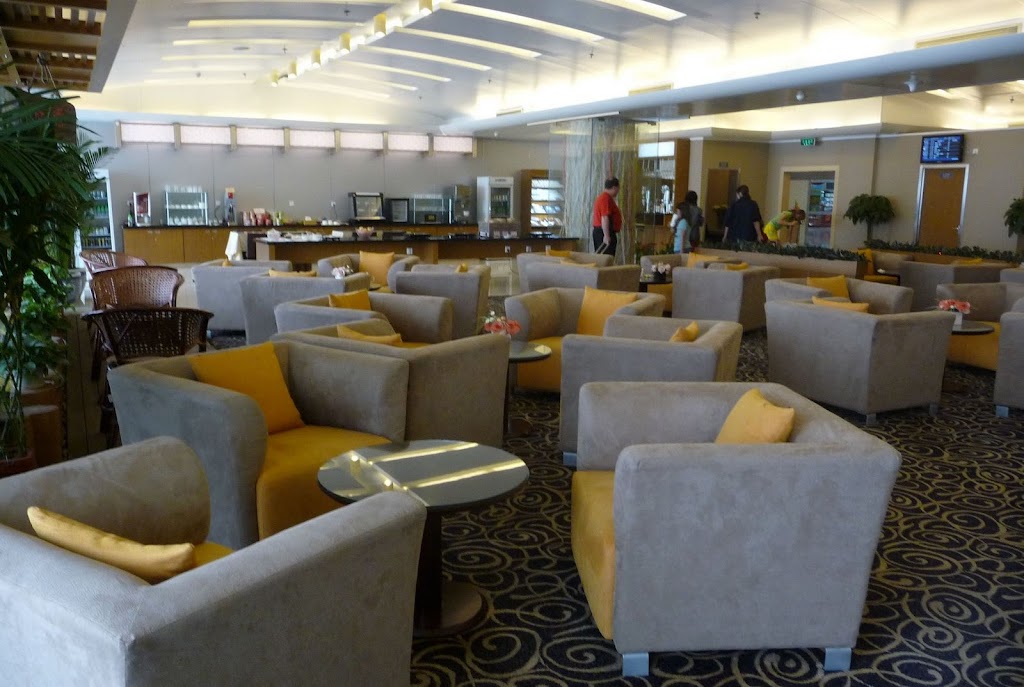 The food available at the counter was significantly less than that at the Skyteam lounge: mostly instant noodles and plastic wrapped cookies. I had to call an idle staff to fix the coffee machine, and he did not bother to go and find me beyond the plant decoration to tell me that it was working again. At due time, he went through the lounge with a sign announcing the boarding of the only flight departing then. 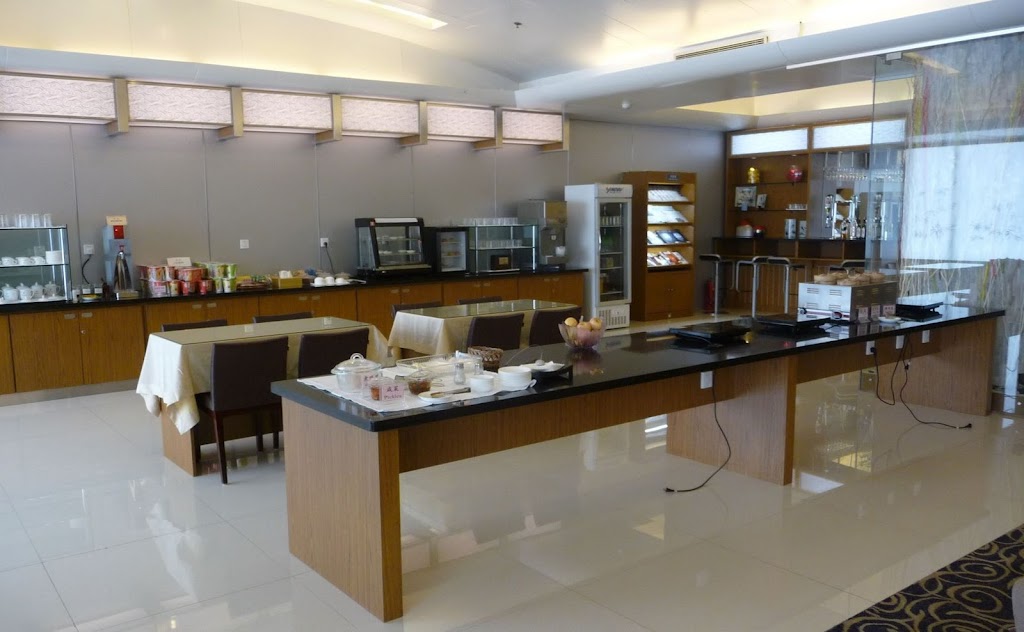 The interior decoration of the A321 is toned down to the limit, but the seat pitch is comfortable. I usually hate the airlines' piped music, but even though that one was on a short loop, I did like it. It alternated guitar and Pan flute with violins. The IFE was meanwhile displaying submarine and sea coast views. 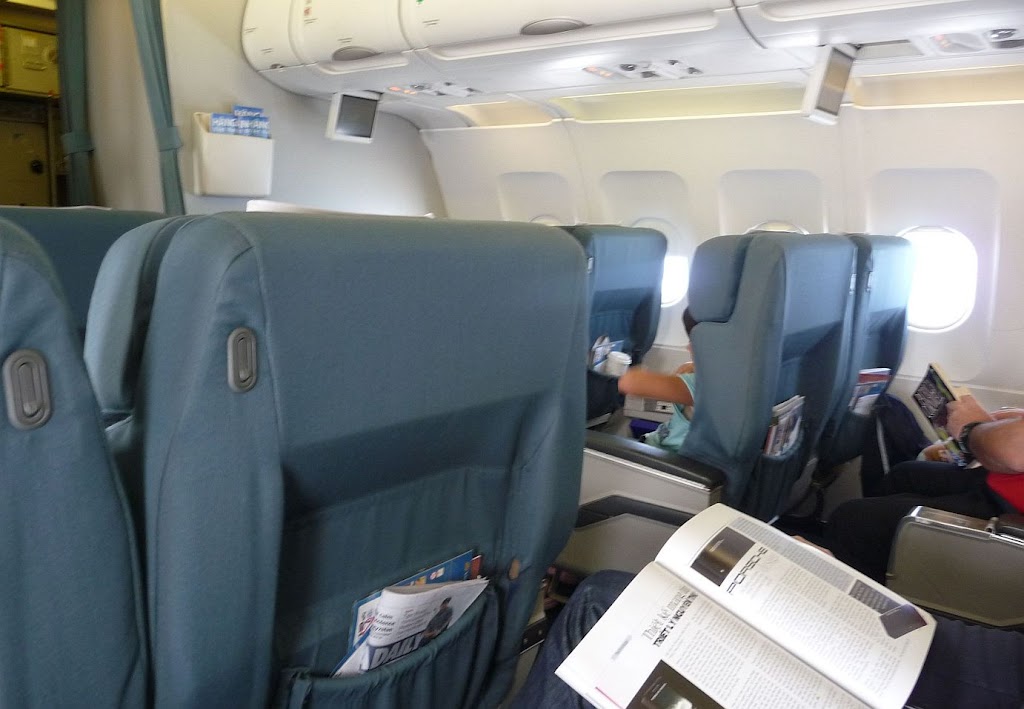 The traditional Vietnamese dress - a long tunic with a high slit showing a tiny skin triangle above trousers is very sexy for a thin woman, but one of the flight attendants had put on some extra weight. The designer of the uniform did not do much: a very ordinary red cloth, whereas that of the staff at my hotel in Hanoi was beautiful. These flight attendants were definitely not beautiful women, but I have no requirement in this regard. 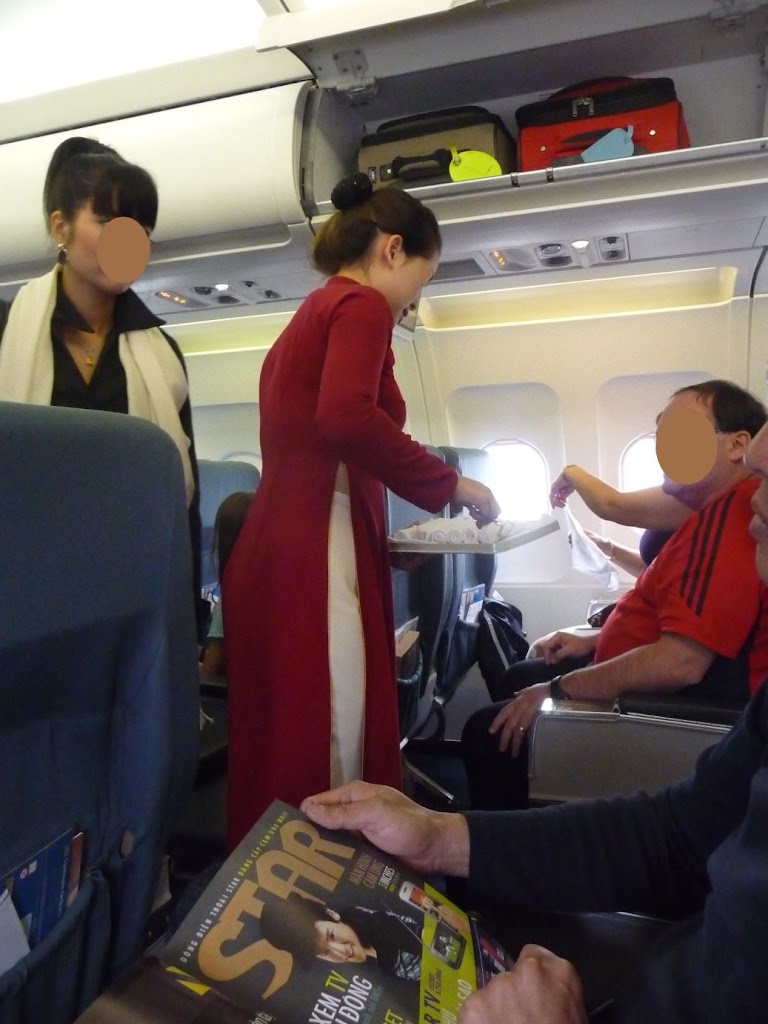 The load ratio was 60% in J, possibly 70% in Y. A flight attendant distributed Vietnamese and Chinese newspapers, in these languages and English. Announcements were only in Vietnamese and English. A welcome fruit juice and an oshibori like on all airlines. A flight attendant took the vests of the passengers as they settled in. I had a window seat, but I would have no view during the whole flight, due to the cloud cover and the very low ceiling at both airports.

Take off 3' ahead of schedule and a rapid climb. The plane veered to the west from PEK, then headed due south towards Wuhan, until turning again towards Guilin, Nanning and Hanoi. This is an example of the number of restricted areas in the Chinese airspace. The turbulences were such that hand writing was impossible (but using a computer was possible). VN was obviously not responsible for that! 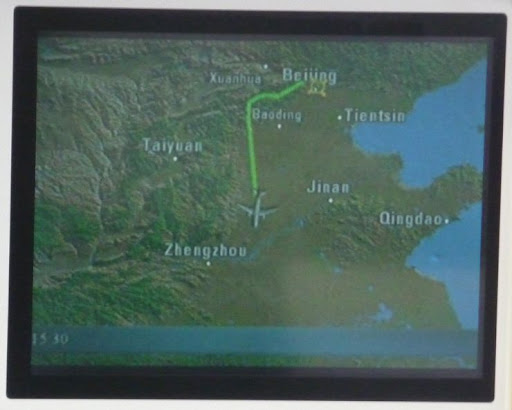 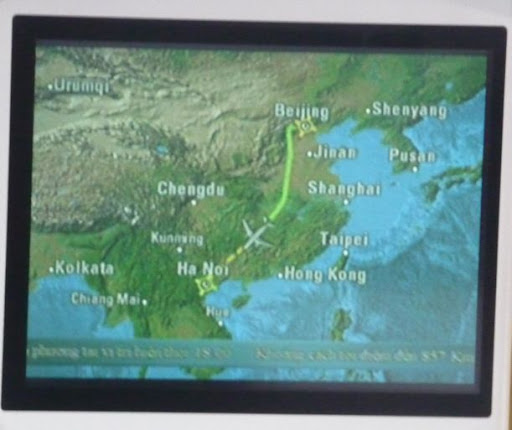 It took me too long to realize that the tiring sound that I hears was that of the 7-8 year old American girl who played games on a laptop without headphones. A passenger probably complained, a flight attendant came to propose her to visit the cockpit, but she was not interested. There was a brief lull until she resumed her noisy playing, and then I asked a flight attendant to please at least provide me ear plugs. She scolded the child who eventually stopped. A crying baby (shortly, on the return flight) is bad luck, and neither its parents nor flight attendants can do much about it. A noisy child is sheer poor education, and the parents are the ones to be blamed in the first place

The IFE displayed a Just for laughs program which needed no sound track, and then only the geovision.

This is the menu - I chose fish: 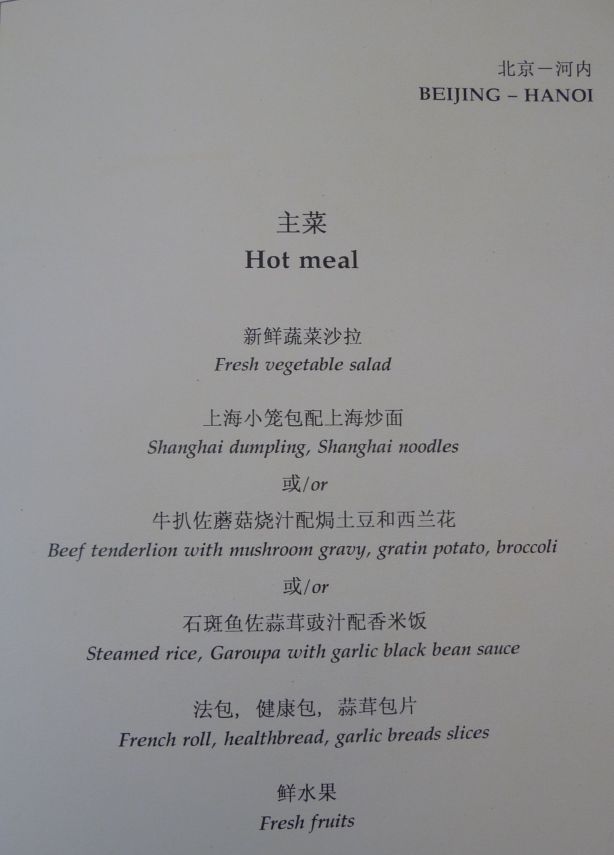 The tray was served and removed in record time: my table was available again 55' after takeoff, which earns VN a bonus point. The meal was rather bland: I had the same in economy on 3 hour Chinese domestic flights. The bread was hot, but definitely dry. Note the salt and pepper set: I asked if I could keep them, and much to the surprise of my Vietnamese neighbor, the flight attendants accepted after a split second hesitation. 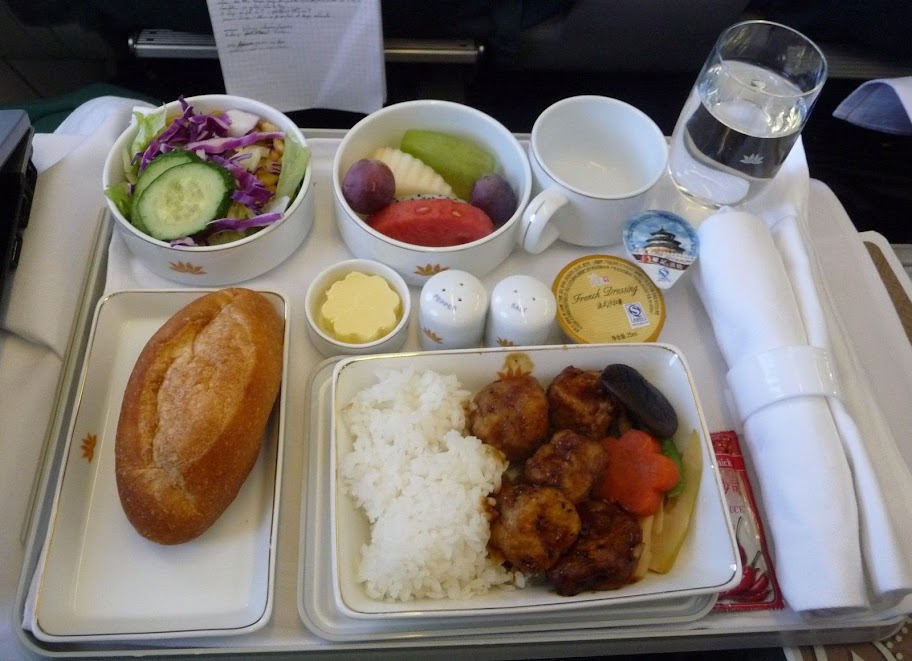 I had not seen this recommendation to clean the sink for the next user for a long time. I find it a somewhat friendly old times charm. 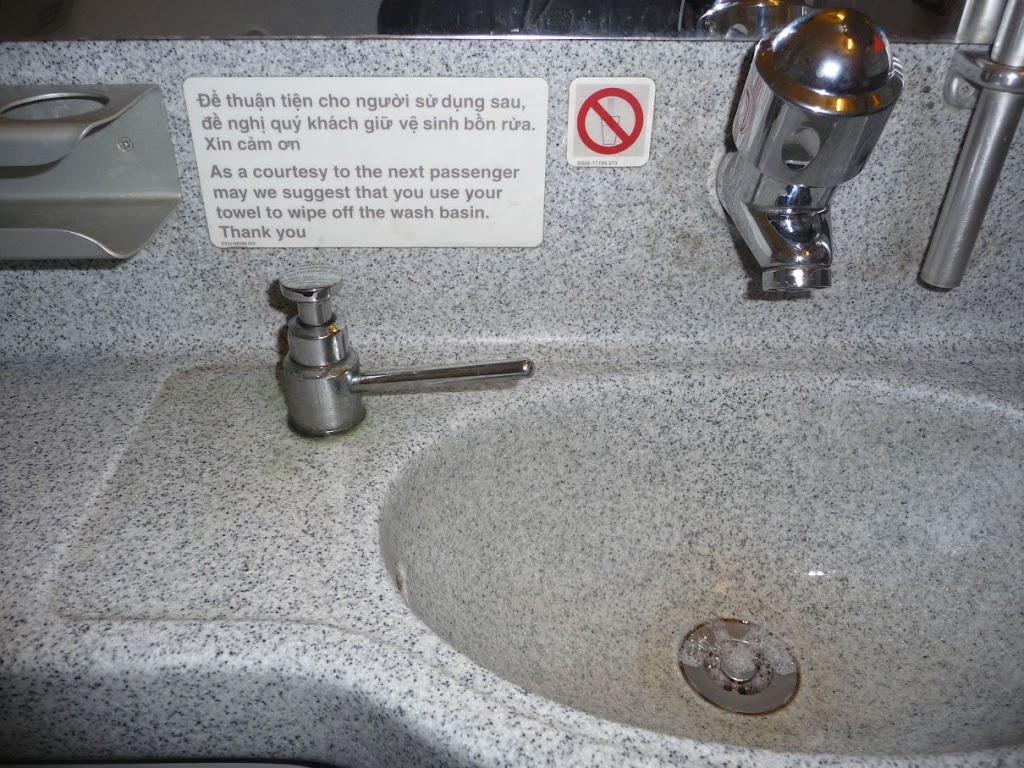 Landing on time in Hanoi; I did not hear the reverse. The plane did not park pier-side, but nevertheless very close to the terminal. The passengers in business class leave through the front door, the passengers in economy from the rear door, which gives the former (in a minibus) a ten minute head start at immigration. There were a dozen manned counters at the immigration, which was ample enough for a single A321 which was far from being full. The immigration check was not as fast as in China (I already had a Vietnamese visa – there is also a visa on arrival facility). I did not have checked luggage, so I do not know about the efficiency of the luggage delivery. 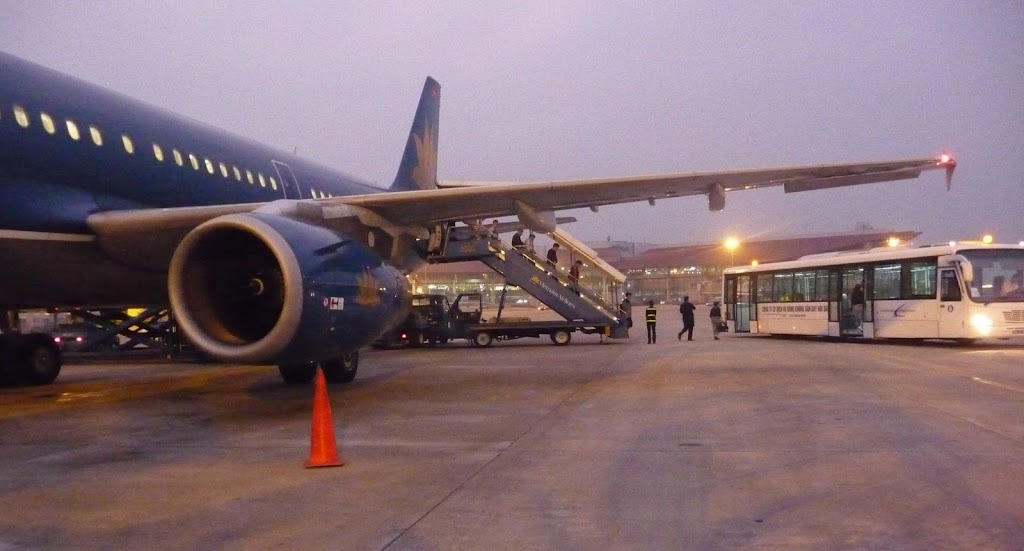 This was a business trip, and I saw too little of the city for a tourist bonus. I'll post the English version of the FR of the return flight later.
See more

VN delivered a very decent product, despite a disappointing meal for an Asian business class.