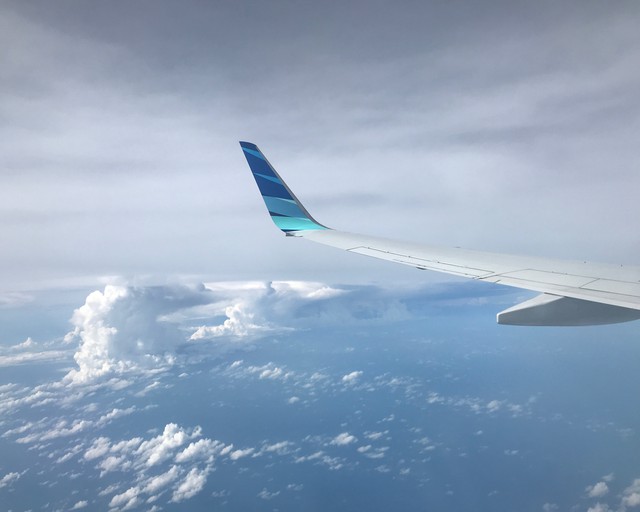 A 5-star carrier reportedly loved by passengers but plagued by PR disaster, and a scandalous CEO just to name a few, Garuda’s past couple of months has been a roller coaster ride . With such background in mind, will the 5-star rating stay true to its name or will it just be another “Scamtrax” rating?
This trip report will sum up Garuda’s flights from Surabaya to Singapore and back (Flight number GA854 and 855) to give a clearer view of consistency, hopefully answering the questions posed above.

Garuda departs from Terminal 2 in Surabaya and Terminal 3 from Singapore’s Changi Airport. International Departure from Surabaya was hectic. The outbound flight GA854 to Singapore only had two check in desks for more than 120 economy class passengers and the queue was an absolute zoo, not to mention the infuriating triple protocol and security checks in Surabaya’s Juanda airport makes the process excruciatingly long. For a mid-size airport, the total time taken of one hour to go through these is absurd. The queue was also disorganized with supposedly two rows of X-ray queues turning into at least four rows. Airport amenity-wise, Juanda’s Terminal 2 is barebone with not much to see in the airport. There is only one lounge before the third security check and a handful of gift shops. On the contrary, all processes in Changi airport were easy and straightforward. Check in was completed under 10 minutes, while security and immigration checks only totalled about 10 minutes as well, including in gate security checks. Amenity wise, no airport can compete with Changi so it is worth coming early before the flight.
On the bright side, boarding process and departure for both flights were orderly and on time.
Note that Garuda does not operate an international side lounge from Surabaya. Skyteam Elite Plus or GarudaMiles Platinum members will have to use their domestic side lounge before immigration . Business class passengers however can access the air side contracted Concordia lounge in Surabaya or the domestic side lounge if time is enough. In Singapore, Garuda’s business class passengers, GarudaMiles Platinum and Skyteam Elite Plus will be directed to the Marhaba lounge in Terminal 3 (formerly DNATA Lounge) 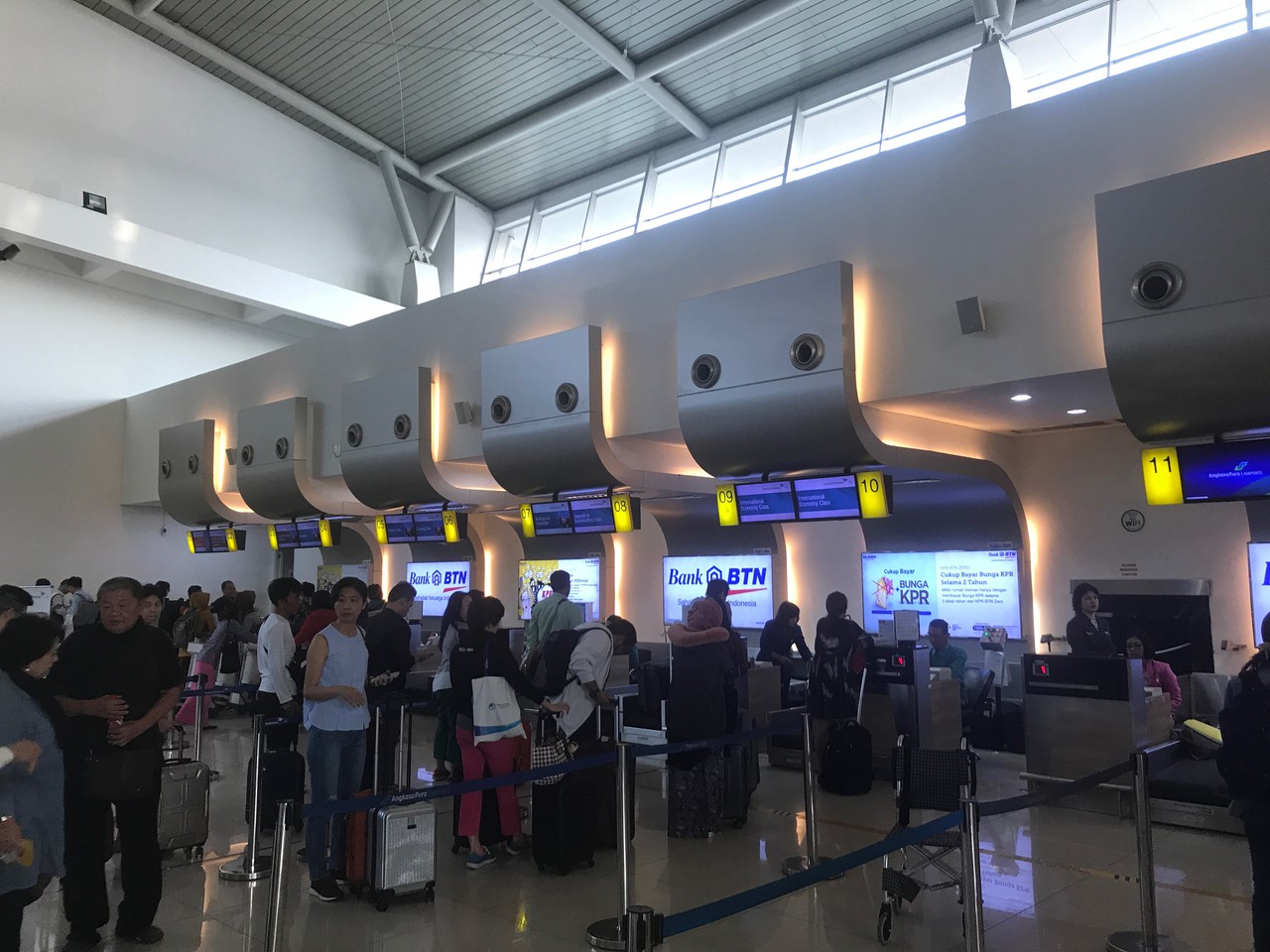 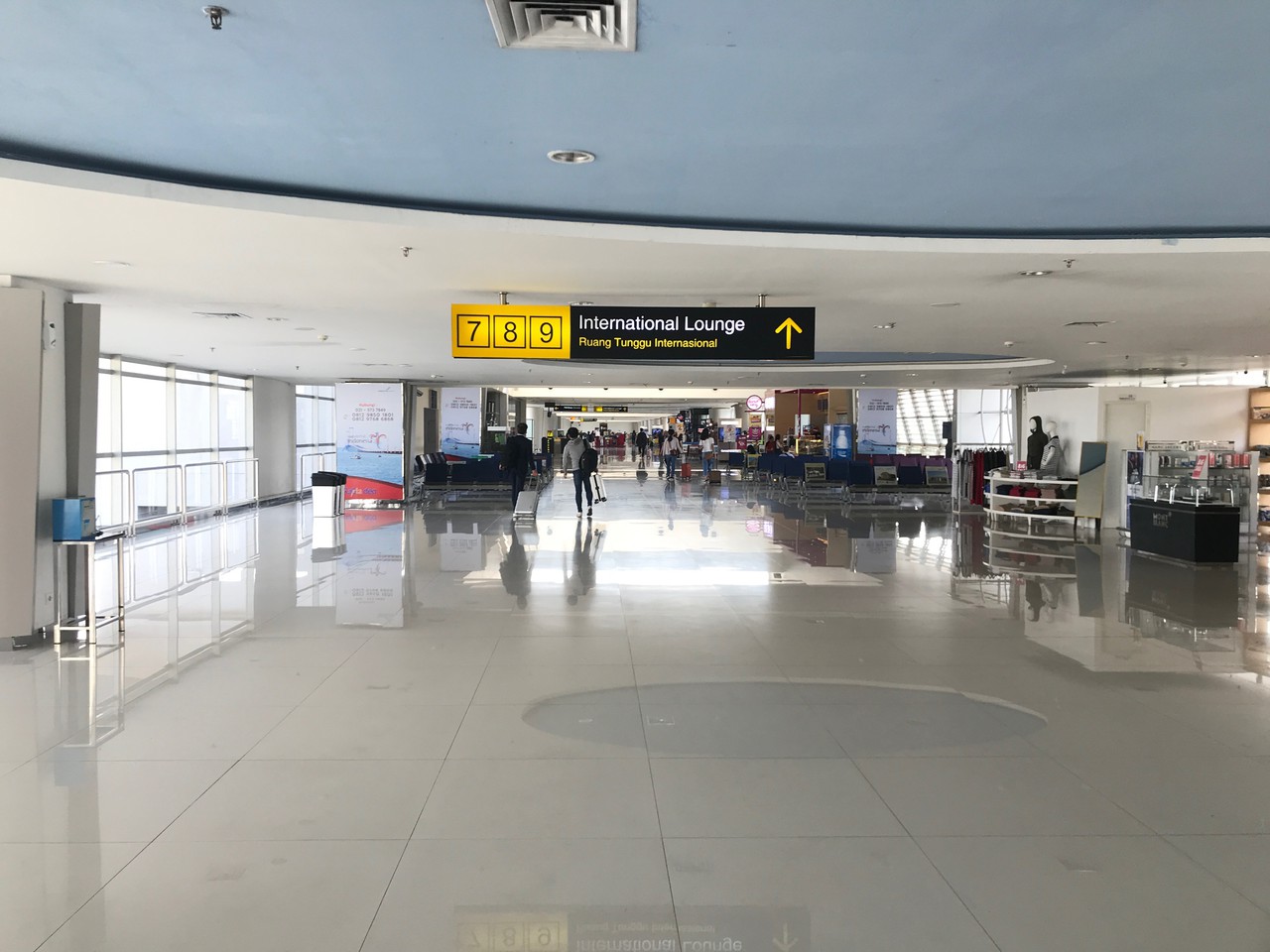 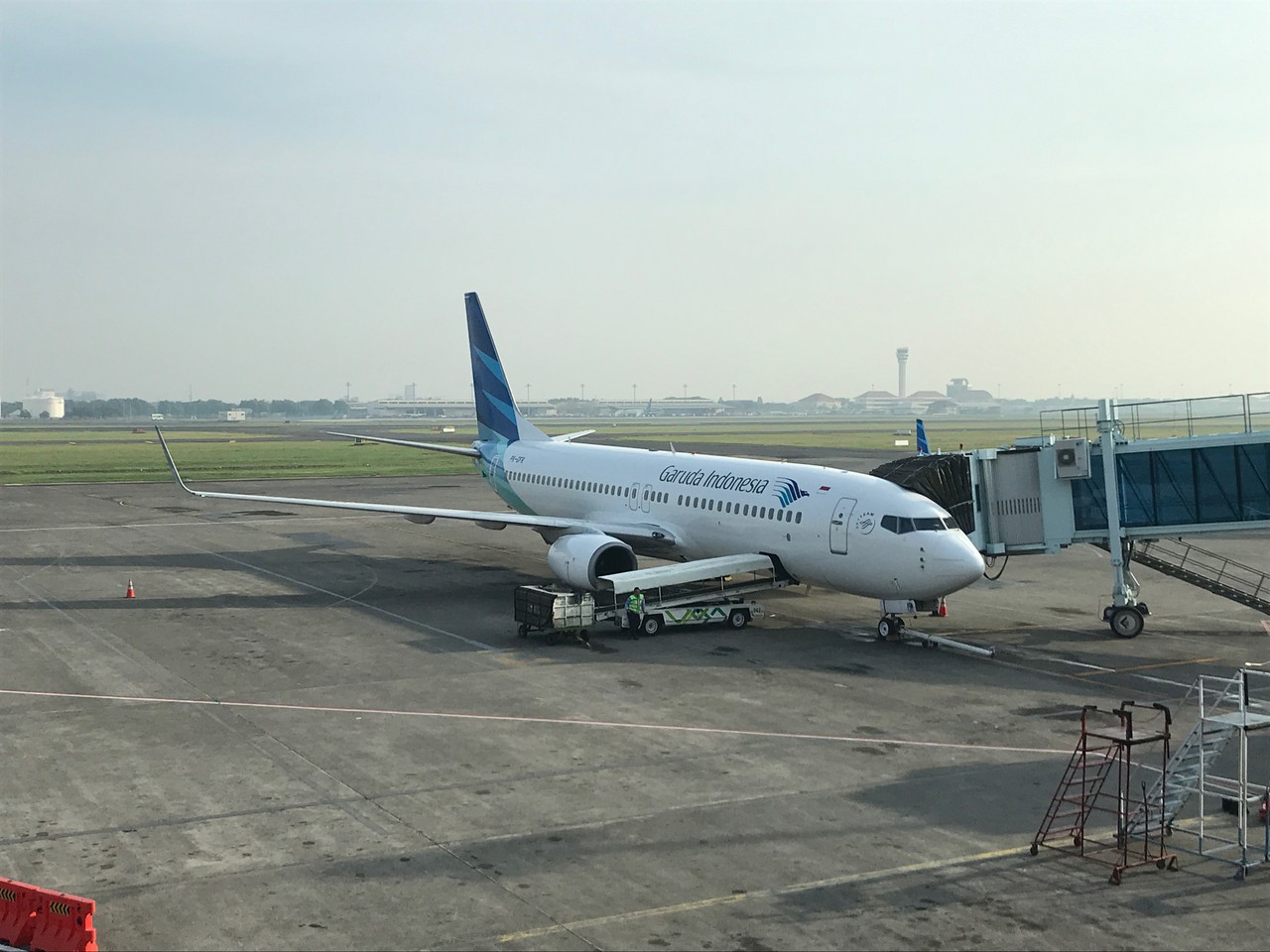 Garuda remains very consistent in their economy class product which is good as passengers know what to expect in almost every flight. This consistency is reflected across the entire 74 strong 737-800 fleet. The seat is 17 inches in width, a standard practice for 737 while the pitch was an excellent 32-inch. Row 21 is bulkhead row while row 30 is emergency exit row . The seat is not the most cutting-edge but it is comfortable for 2-hour rides between the two cities. Most of Garuda’s 737-800 are equipped with Boeing Sky Interior that has mood lighting and curved overhead luggage bin to create a more spacious feeling. However, some may still find oneself getting the older cabin (the seat is still the same no matter if it is the new or old cabin). The one very positive thing Garuda nailed is every 737 in their fleet has overhead individual air vents to keep passengers cool. 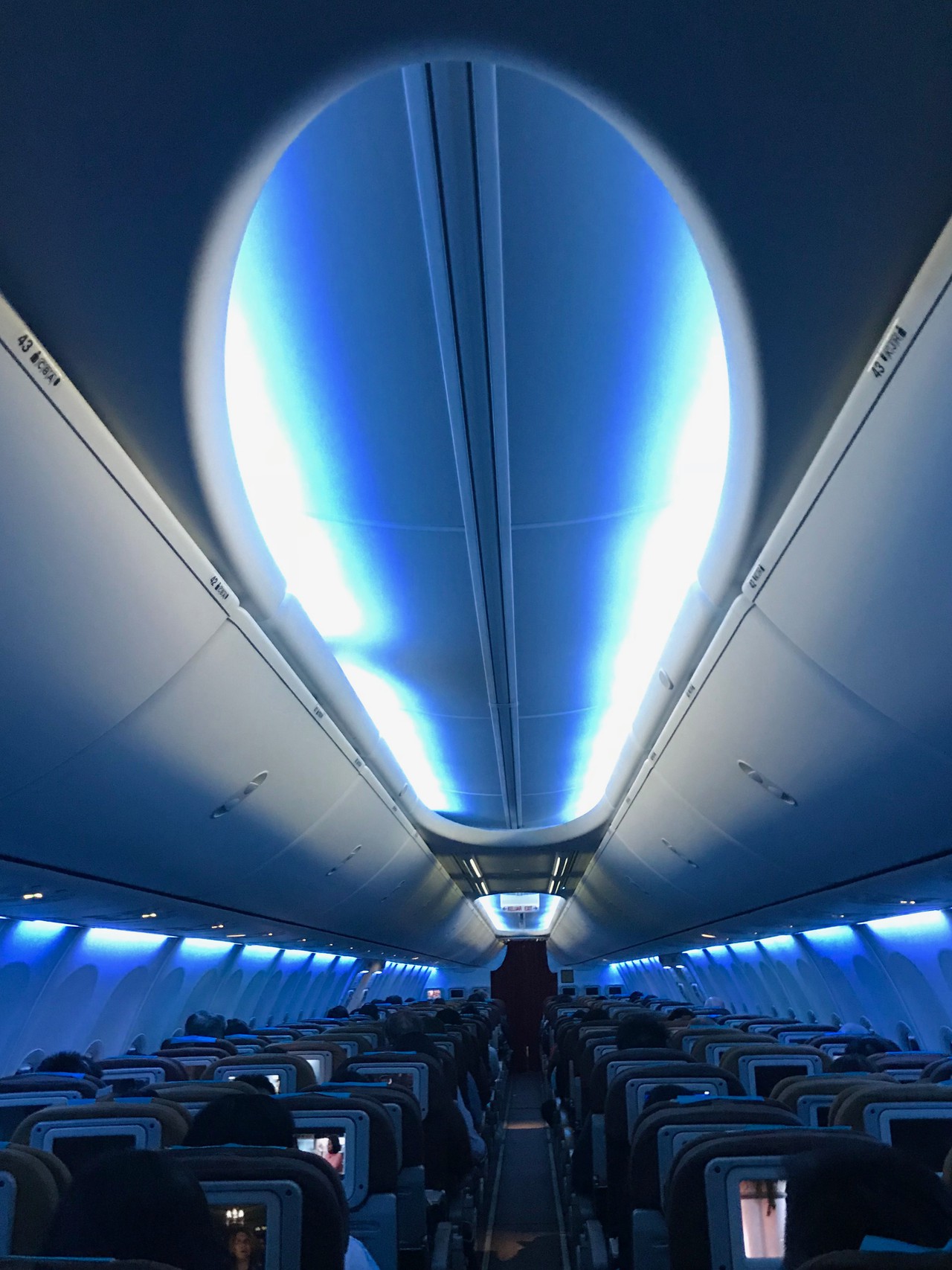 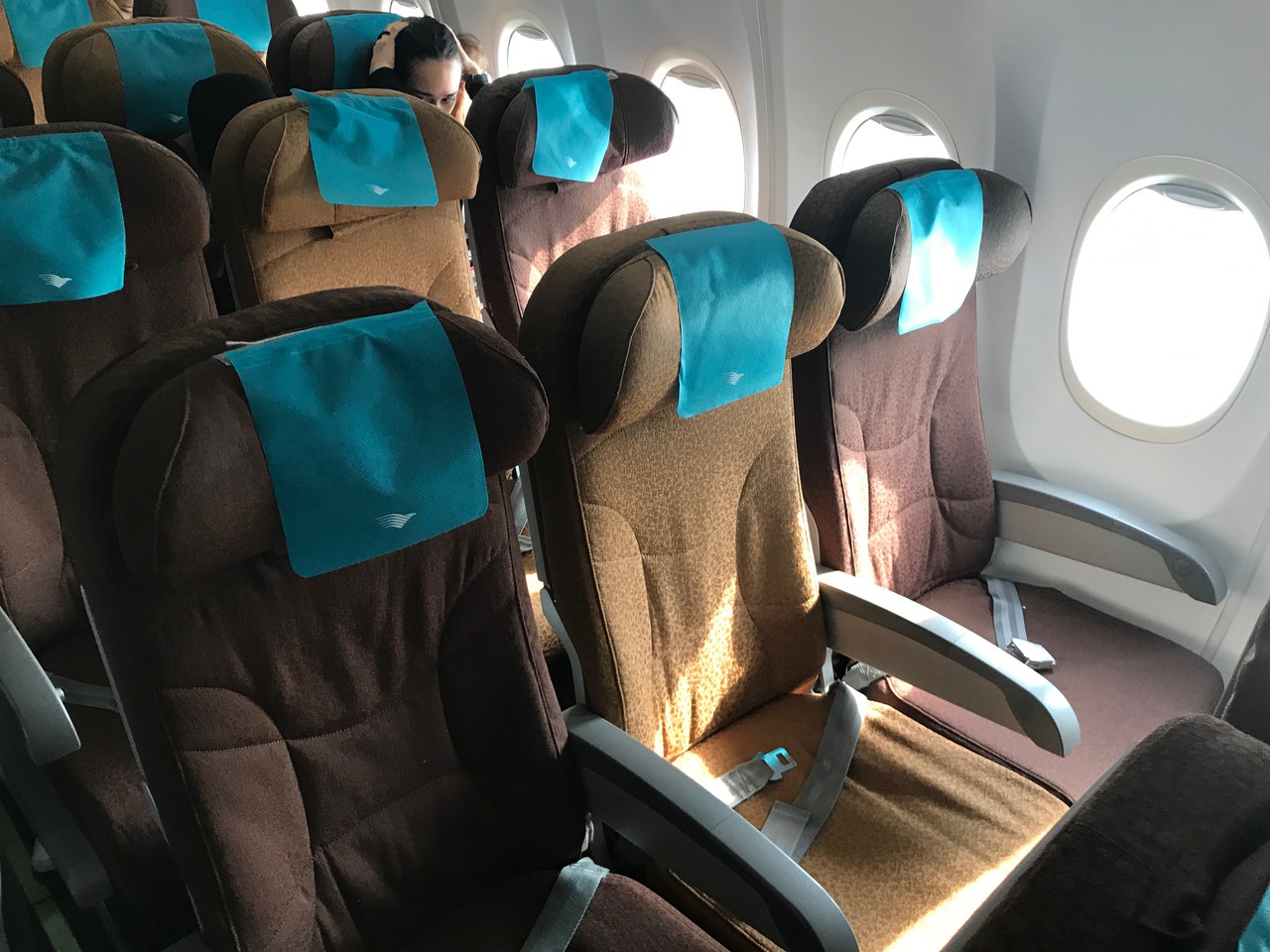 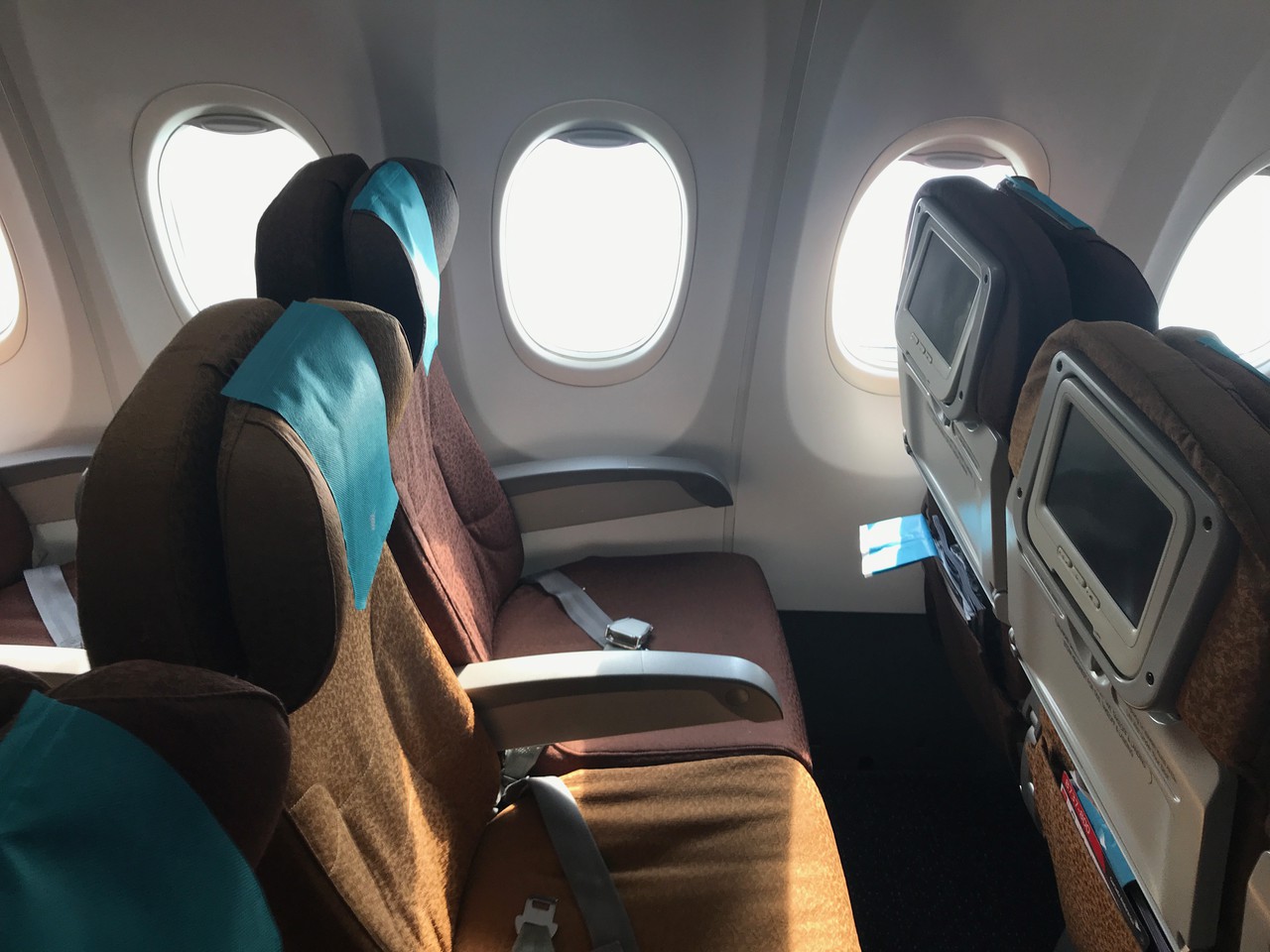 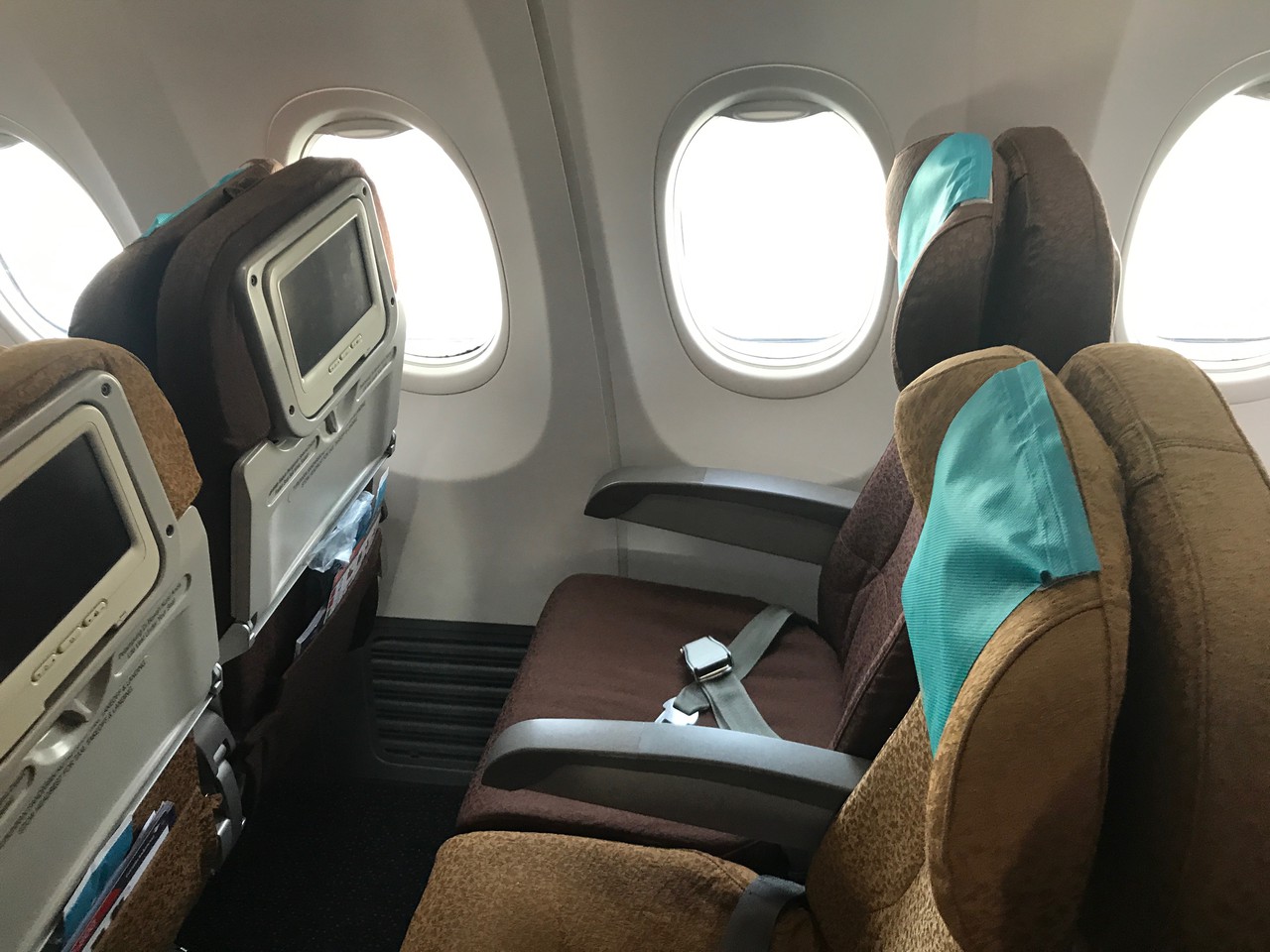 For such short flights between the 2 cities, blankets are available upon request but not pillows. That could be a downside but it does not matter to me for the 2-hour leg. To me, it makes beddings even less relevant considering the Surabaya Singapore flight departs at 7 a.m. while the return flight departs at 7:30 p.m.. There are definitely no amenity kits (some even reported that “5 Star” airlines do not have this perk and it is not as if a regional flight needs it).
Airlines in South East Asia are typically disappointing at the technology front (exceptions are Singapore Airlines and Thai to some extent). Garuda’s 737-800 fleet is neither equipped with USB charging ports nor universal power plugs, which is a huge problem for people who need to work with laptops or charge their phones. It seems like they are not retrofitting their 737 (at least not to my knowledge) and since they have cancelled all their 737-8MAX order, this issue is likely to stay. Wifi also does not exist. However, I do not mind staying disconnected for two to four hours so the lack of wifi does not matter to me.
Entertainment wise, the screen is on the small side with acceptable resolution. The touchscreen is not very responsive and without a remote, the hard tapping may annoy the passenger in front. Selections were rather limited with a total of 31 movies and 100 miscellaneous videos of dramas, documentaries and tourist information. A not so pleasant feature is that Garuda always plays a 5-minute long advertisement that locks every passenger entertainment system like an announcement . Quite frankly, it felt cheap. The flight map is also not interactive. 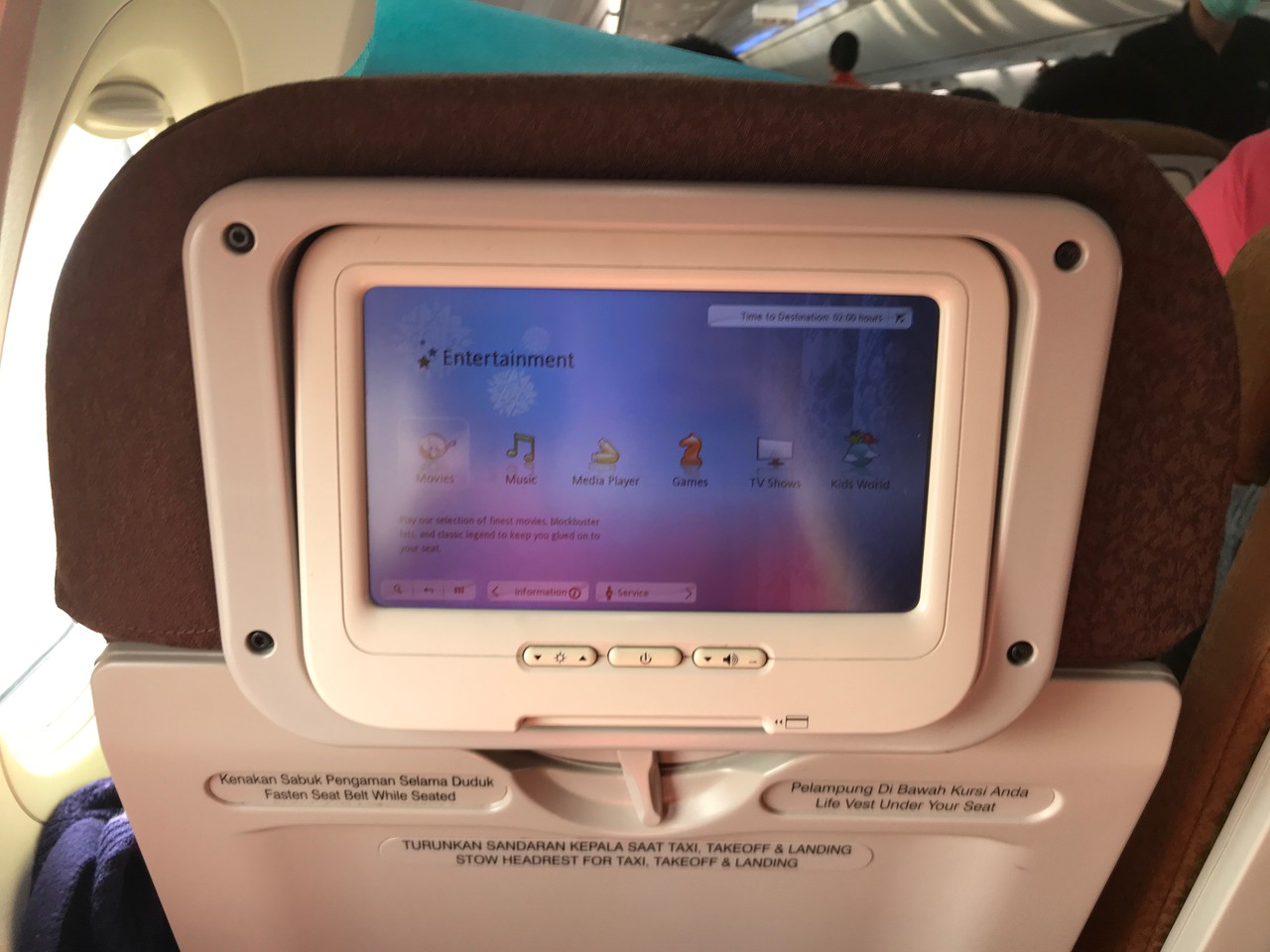 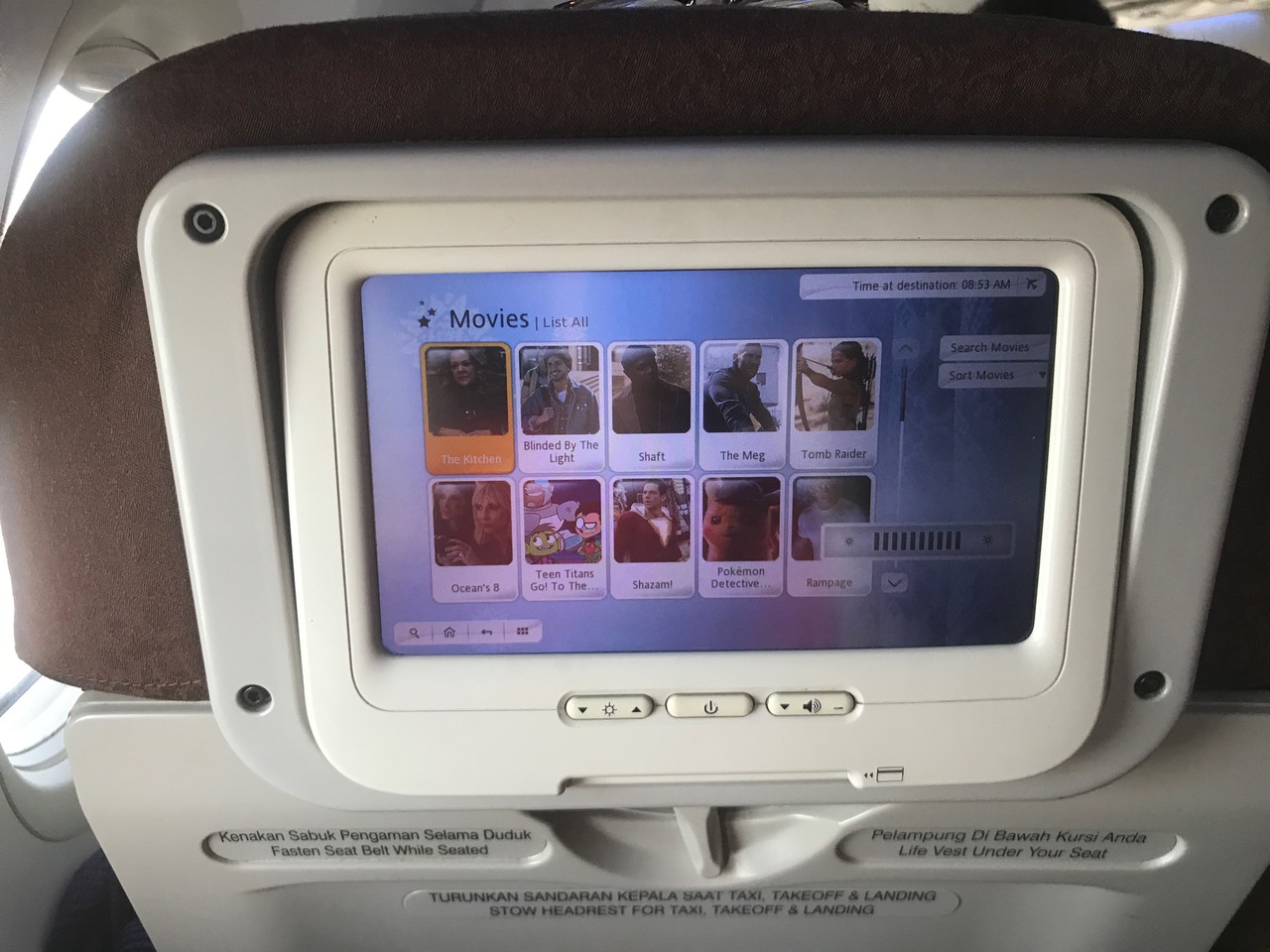 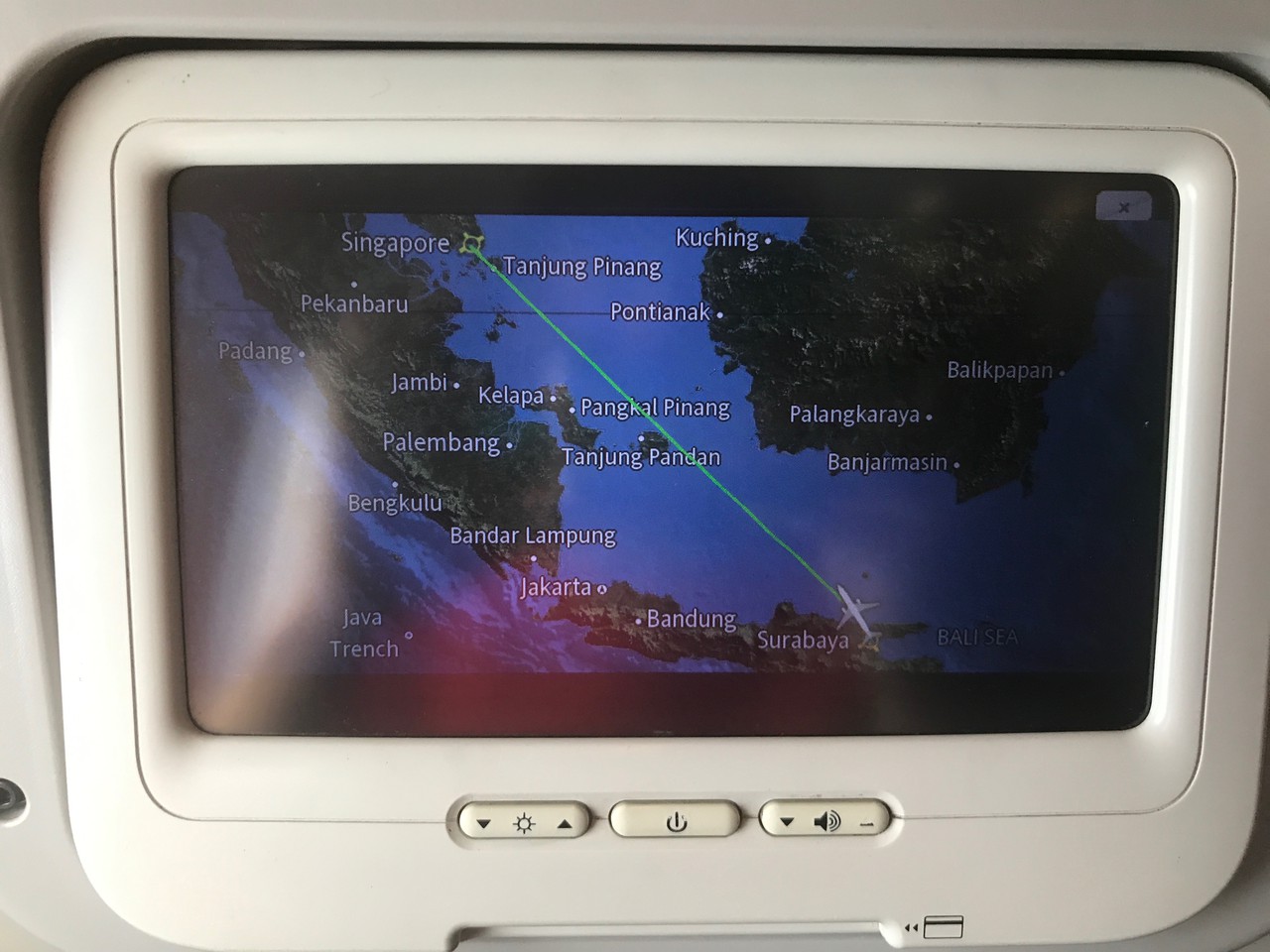 The greatest perk of East Asian premium airlines has to go to their complimentary meal service even on short flights like these. Garuda is definitely part of this and serves meals with decent quality for these short haul flights. Between Singapore and Surabaya, two options are generally given and comes with drinks, main course, salad, and dessert. Note that alcohol is not available in both flights. 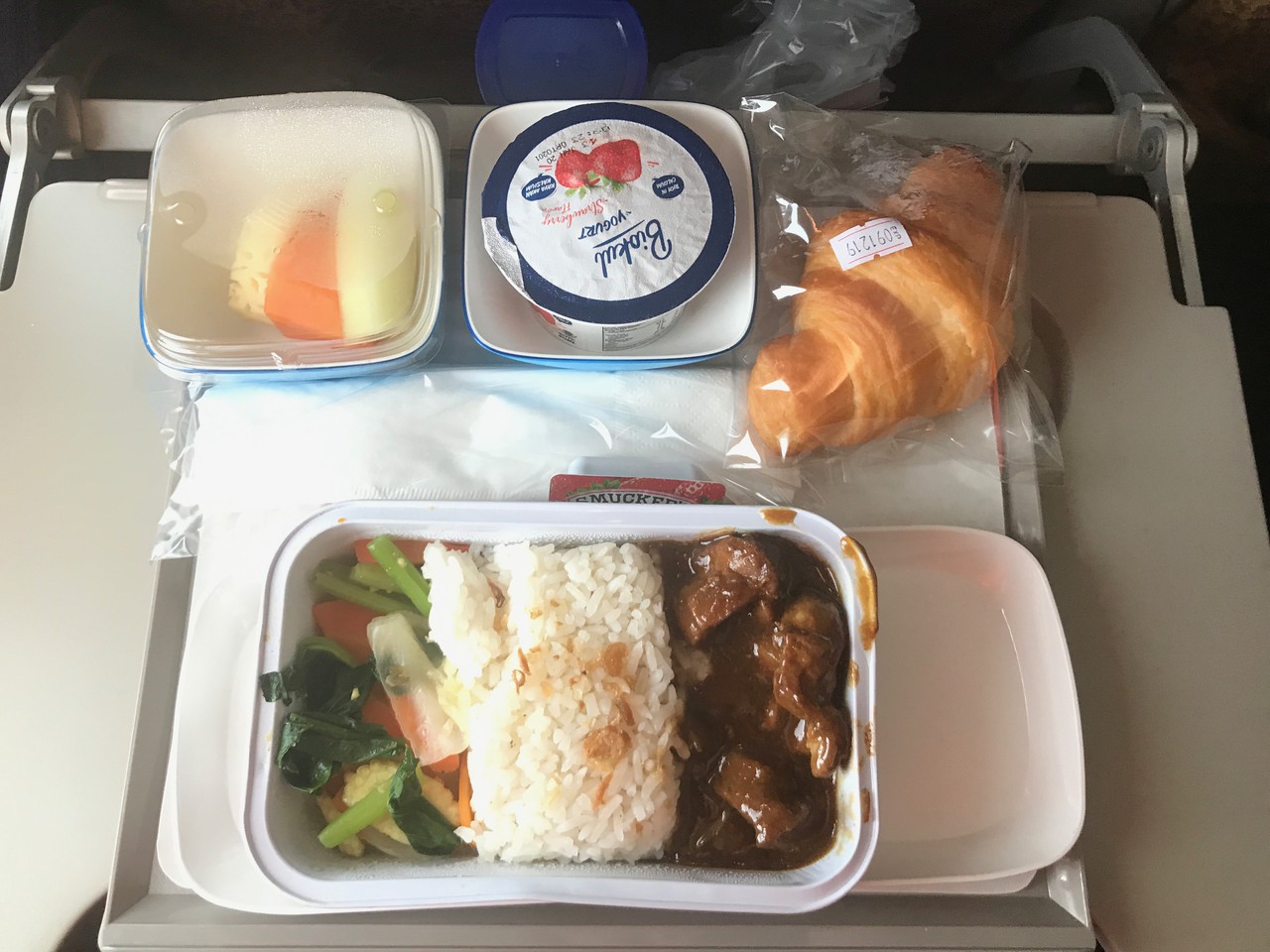 This is the front where I was thoroughly disappointed. Garuda has been synonymous with the finest of Indonesian hospitality and I can confirm that with my past experience and other trip reports.
Unfortunately that is not true this time. For my outbound flight to Singapore, the crew members were rather cold and tired but still acceptable considering that it is an early morning flight. What terrified me was that even in the event of turbulence, the pilot did not even switch on the seat belt light or order a service halt to the flight attendant. The total lack of communication caused the crew to be subjected to the danger of spillage or falling for a good 30 minutes. I thought this was just an outlier event but the same exact issue occurred on the return flight. I would also like to point out that the pilots hardly made any announcements for both flights. Putting your crew in danger is simply intolerable.
The return flight services only got worse. The flight attendant repeatedly made errors on the meat composition of the meals. What it turns out for chicken was actually beef. This could prove to be very damaging for some people with beliefs or health issues that prohibit the consumption of beef. Furthermore, the entire meal service for the short 2-hour flight took more than an hour. Just for comparison, both flights were subjected to fair amounts of turbulence and both pilots failed to make announcements to stop the service, yet somehow the outbound meal service was still able to be kept within 45 minutes. What puzzled me more was that the return flight had a lower passenger load than the outbound flight. This particular flight crew in question were also even more unenthusiastic than the previous one.
This raised two questions: Were the past months of turmoil so damaging to Garuda that the whole company was demotivated? Were these flights just a total coincidence of bad apples simultaneously being encountered by me? At the end of the day, I know it is very difficult to be pilots or flight attendants. I have tremendous sympathy for them as they are responsible for the lives of the people they are serving and are subjected to direct complaints from passengers. But with this kind of condition, I doubt that I was actually on flights with an airline that is so proud of their hospitality.

Does this airline stand up to be a 5-star airline? I guess the answer is clear at least from my experience

Garuda greatly disappointed me in these flights. I hope that these flights are just isolated cases of anomaly in their company and as a proud Indonesian I hope the company will up its standard as competition for air travel market is merciless.

The contributors of Flight-Report published 11 reviews of 4 airlines on the route Surabaya (SUB) → Singapore (SIN).

The average flight time is 2 hours and 14 minutes.

Wilson_772 is member of Flight-Report since December 2019.

He wrote 6 reviews about 3 airlines and 4 airports.