By marathon GOLD 3550
Published on 7th September 2013
This series of FR was originally posted in my native French. You are now only one FR away from the most exciting flight of that vacation (HO1146)

It is pitch dark when I reach the Departure level of Guangzhou's airport.

Guangzhou is the original hub of China Southern, the largest Chinese airline, and it was difficult to ignore even before entering the terminal that CZ had just introduced its first 380, on October 18th the year before. 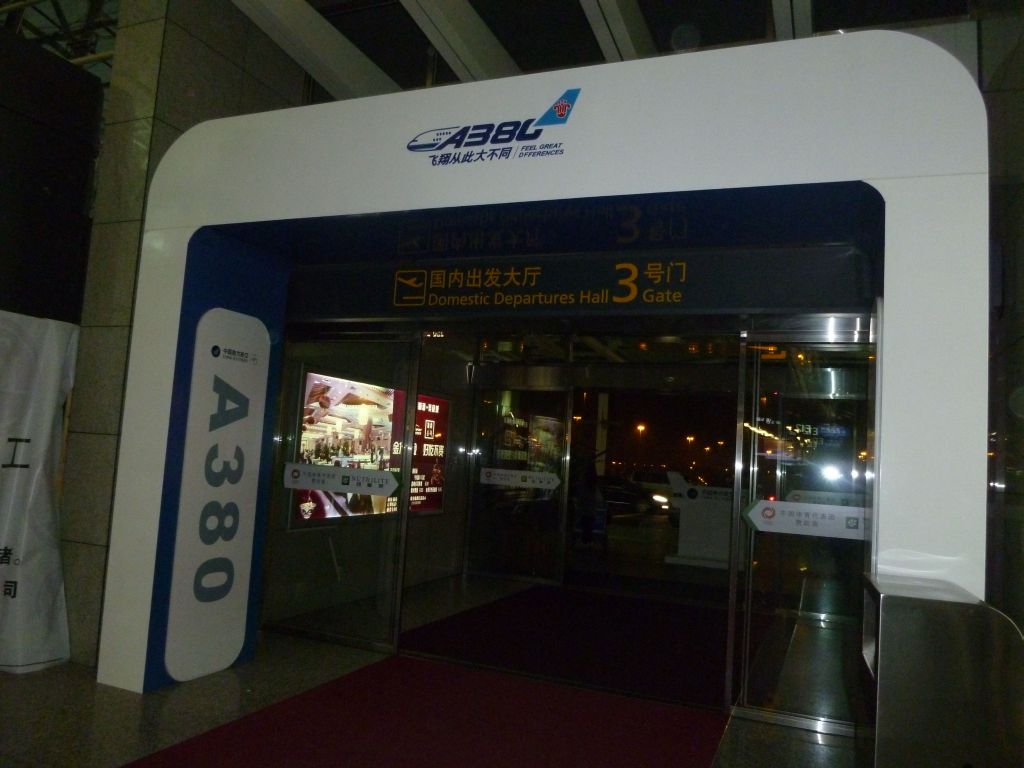 More advertising on the A380 inside the terminal 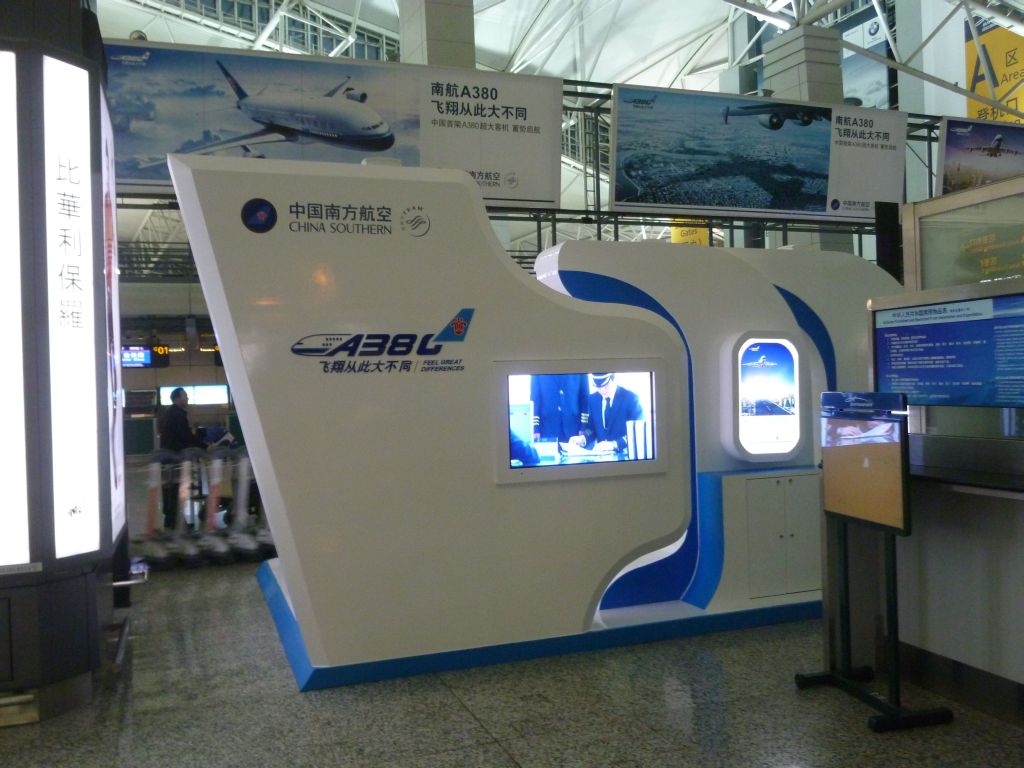 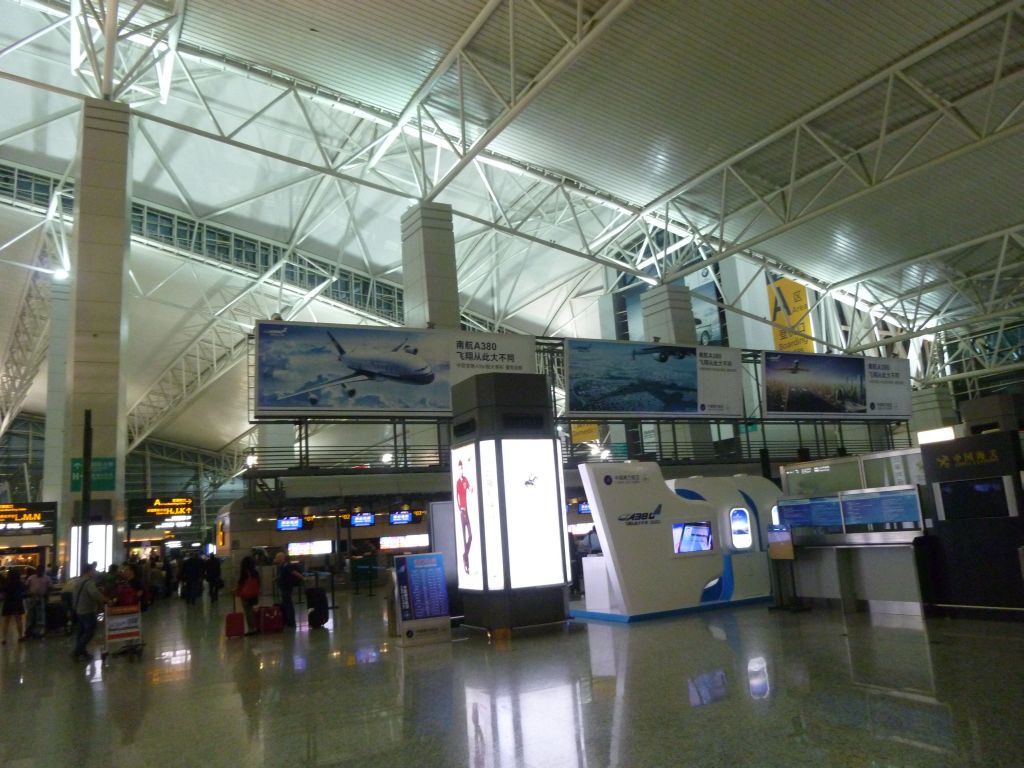 Do you want to use the automatic check in machines? 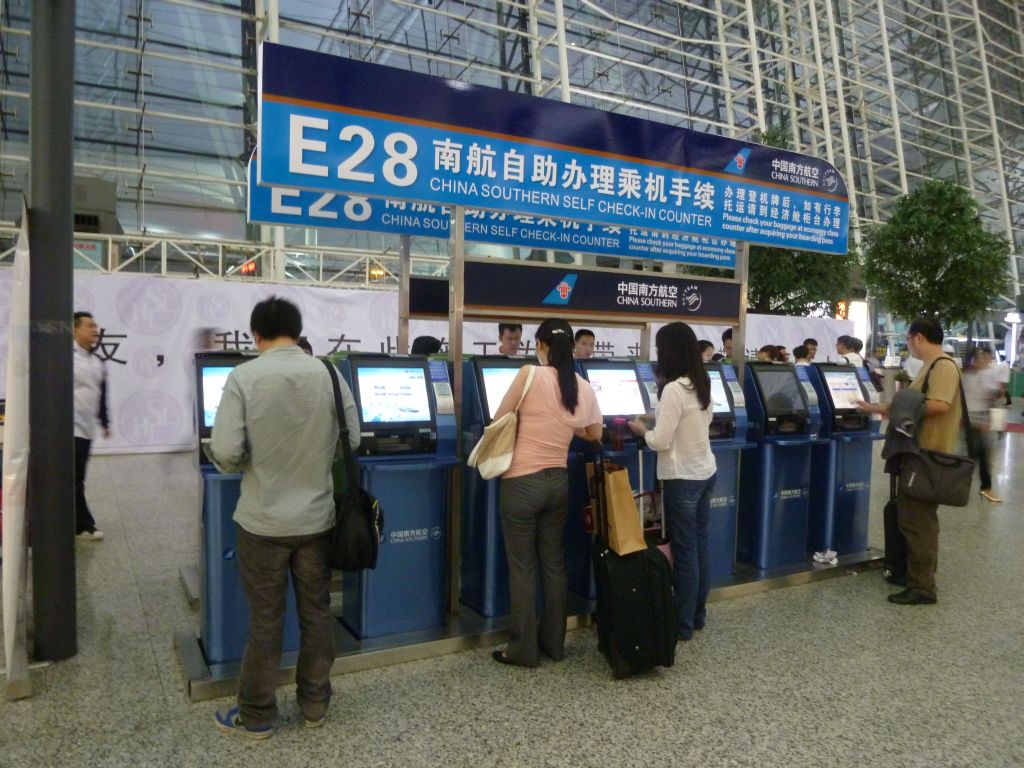 This is the home page

And if you want to try the A380 without leaving China, this is the flight that you should not miss.

If this was not enough, there were a dozen pages to the glory of the A380 (especially that of CZ) in the thick in-flight magazine.

My flight was actually much shorter that the three hours something of CAN-PEK. Seat 34A: I expected to be in the rear of the A330 with such a row number.

The boarding gate number (B225) lets me guess a remote parking stand. 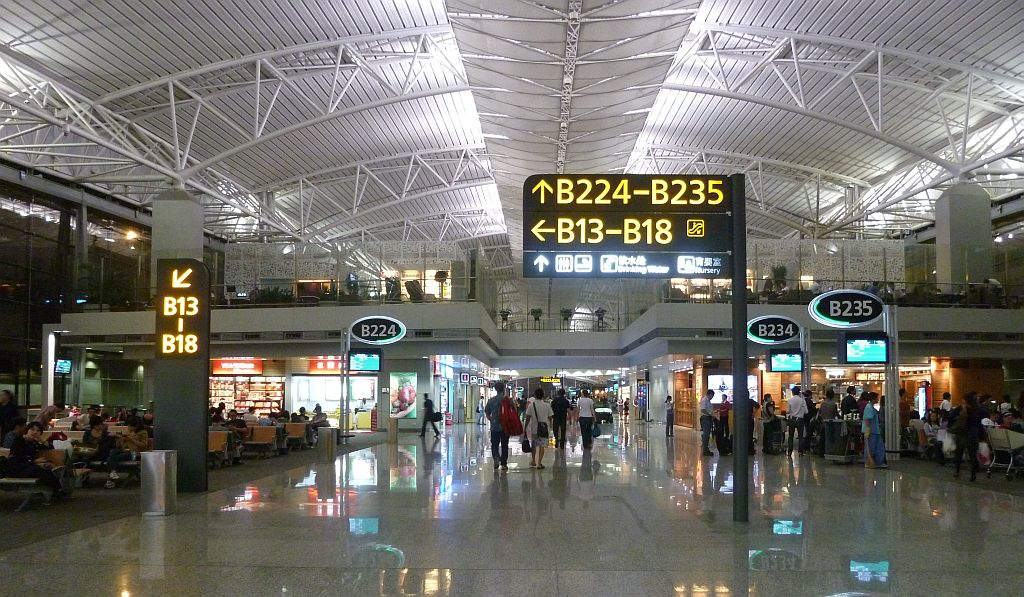 Wrong guess: it was a non-descript gate, halfway a very wide corridor. 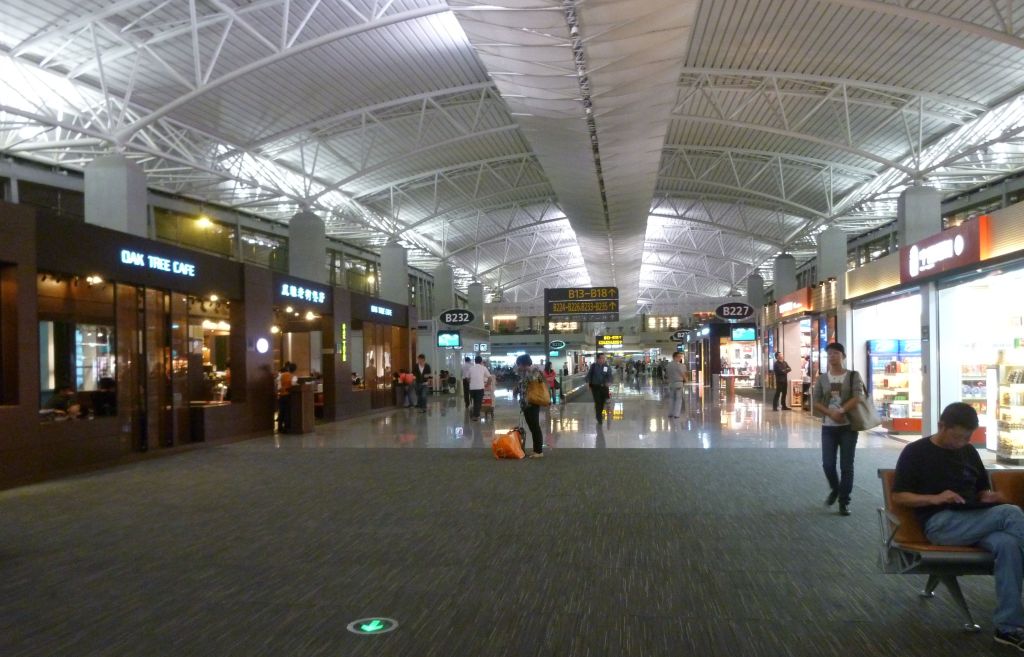 This is its extremity.

CZ's lounge is upstairs. You can see a children playground, which is dark. At that time, Chinese kids are not supposed to play. 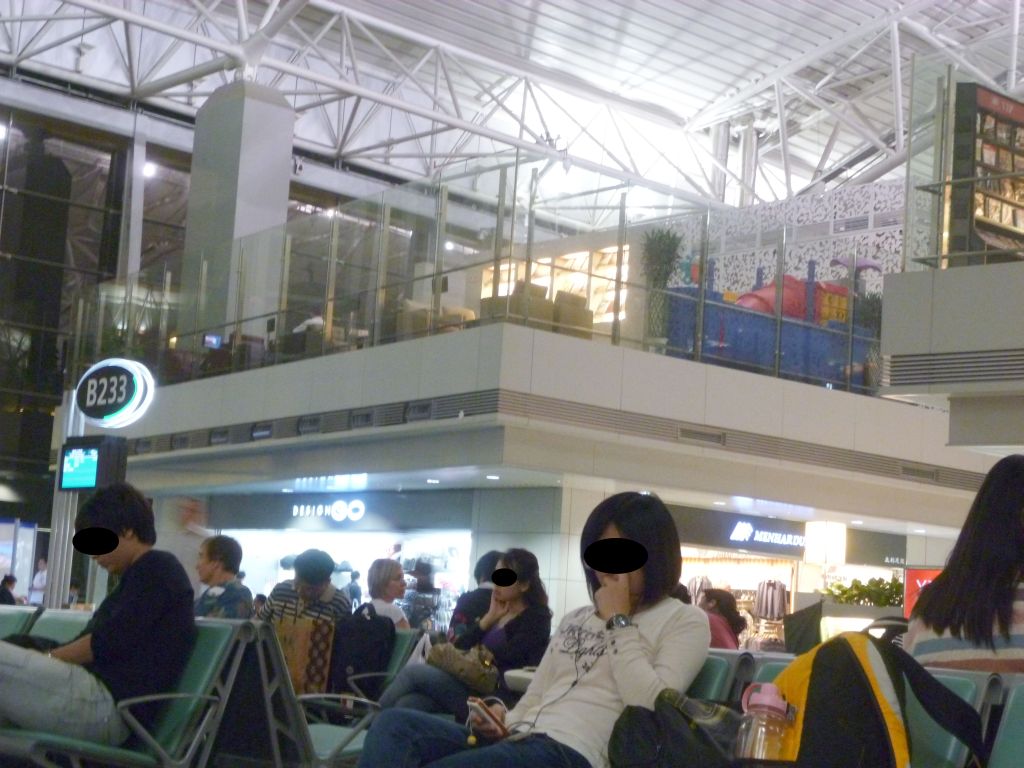 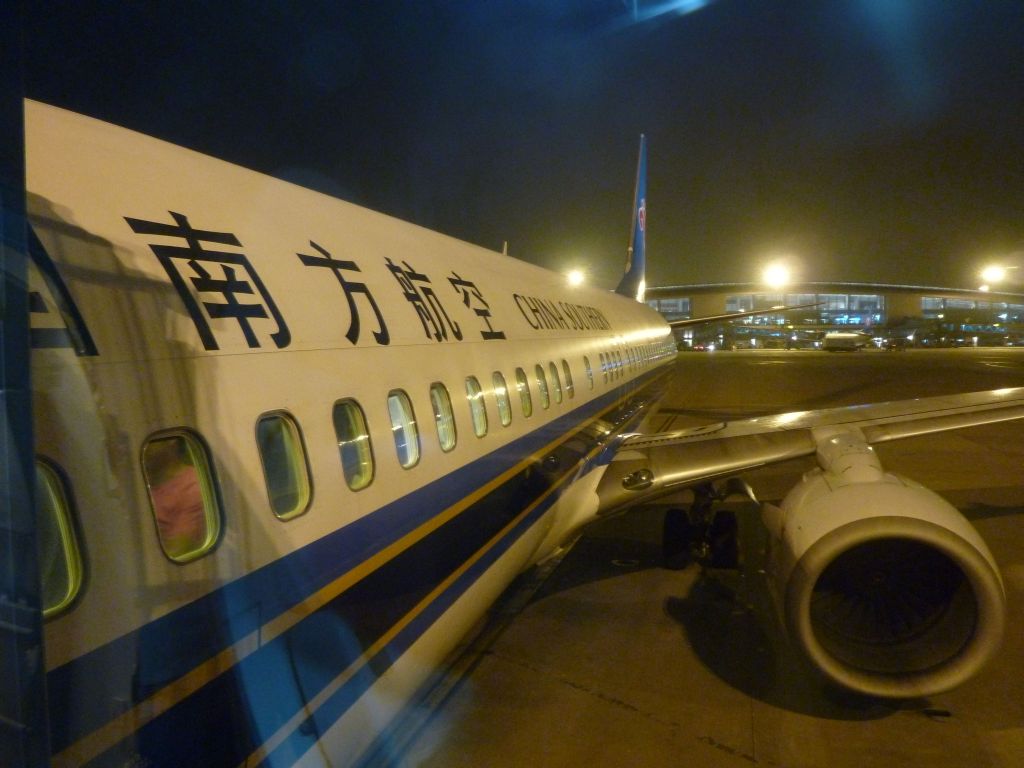 The layout is also ordinary for a Chinese domestic flight, with two rows of business class in 2+2 layout, numbered 1 and 2, of course. 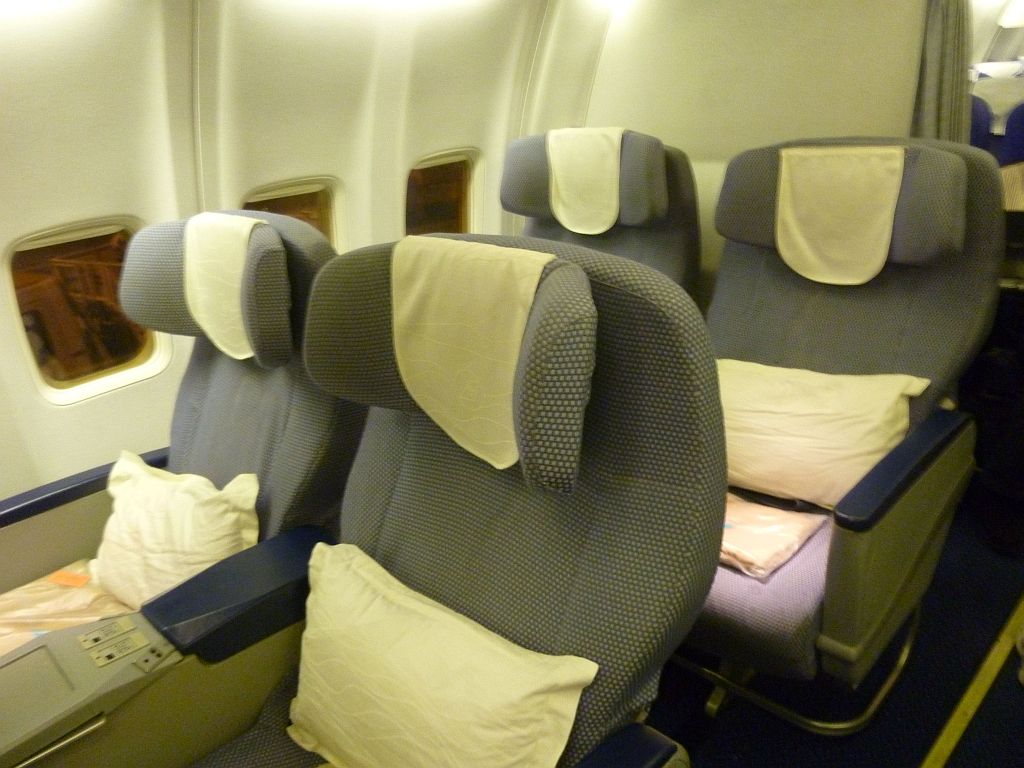 And then the economy cabin, in 3+3 layout, but the numbering starts from row 31. I later discovered that economy starts at row 31 in the entire CZ fleet. Row 34 is actually the fourth one in economy, a privilege due to my FB Elite+ status. This is the one and only advantage that I ever had in Chinese domestic flights with CZ. Accumulating airmiles (few of them) require buying full fare tickets, which is economically not justified. The letter R on my R34A seat number on my BP means something like Restricted. 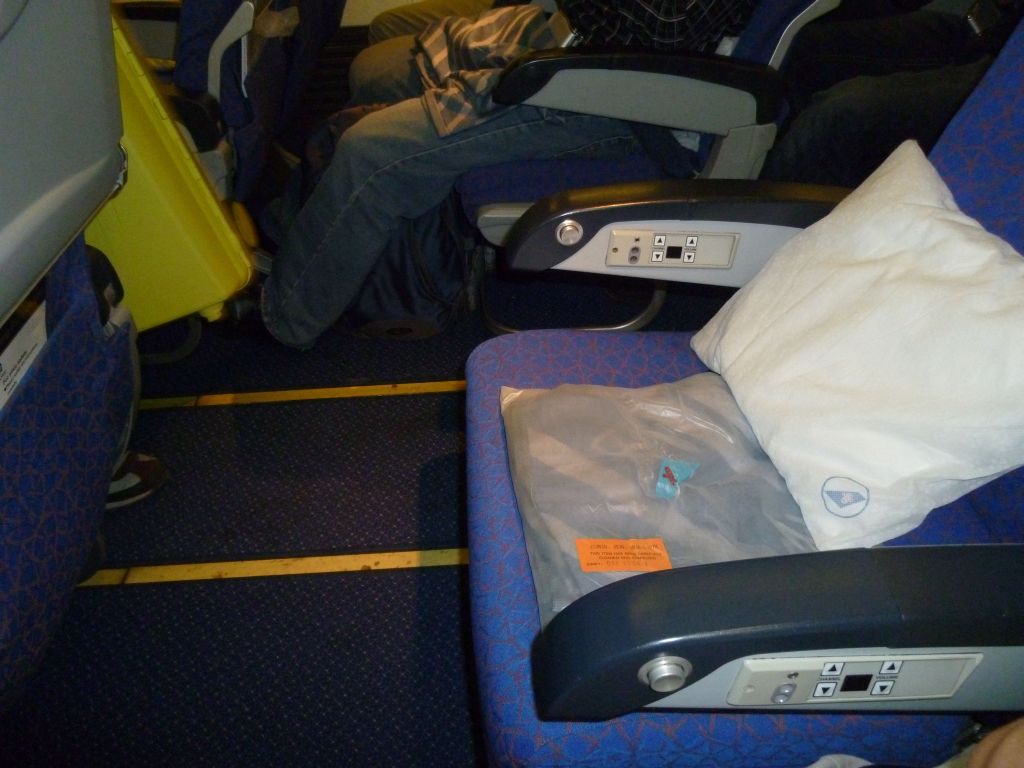 The seat pitch was very comfortable (it was presumably less behind), photographed here before the passenger at seat 34C arrived, and four years later (!), after posting this report on CZ flight out of CAN, I realized that I had flown in Economy Premium - obviously because of my FB status on this flight.

The passenger at seat 34C… She seemed to make a point to break all the rules that seem useless as long as there are no turbulences or worse. She seemed to be very tired, and lowered her table as soon as the plane prepared for take-off. 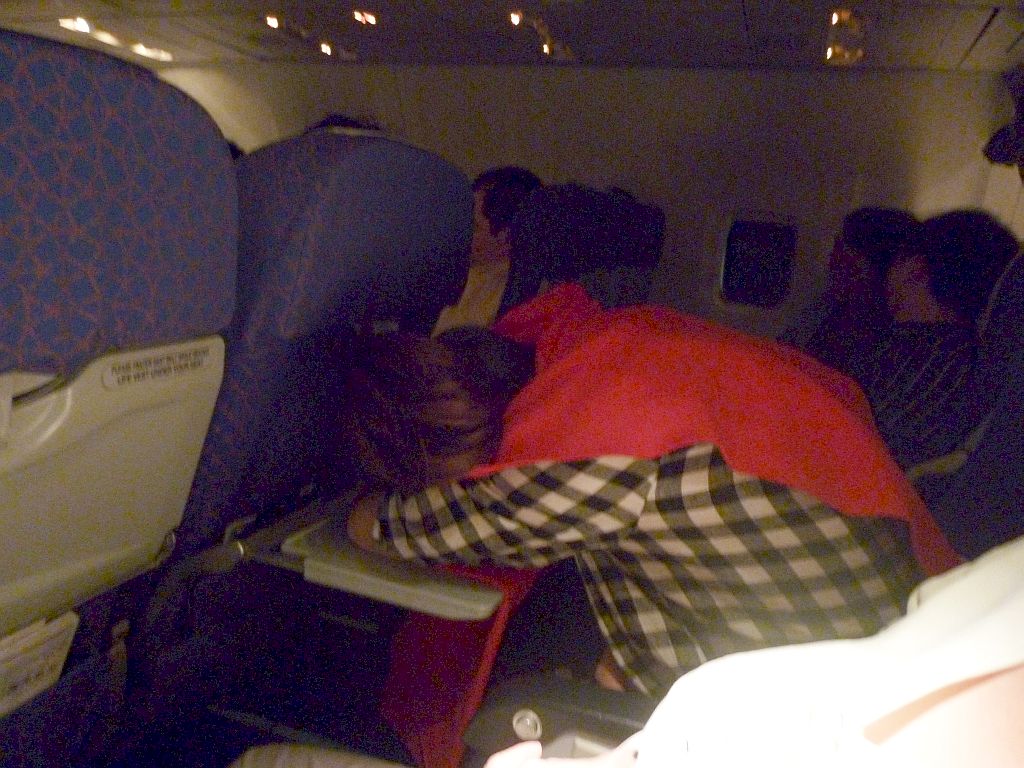 She of course waited until well after the beginning of the descent to go to the toilets. 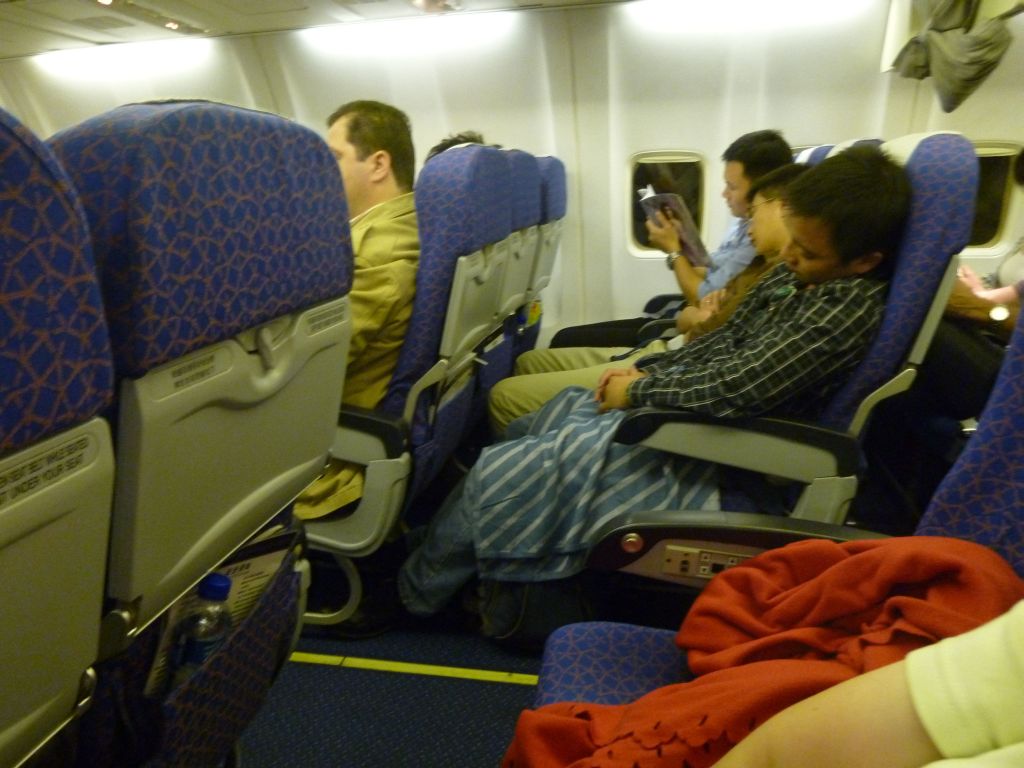 And back from the toilets, she wrapped herself in her blanket, which apparently made it pointless to wear a seat belt. 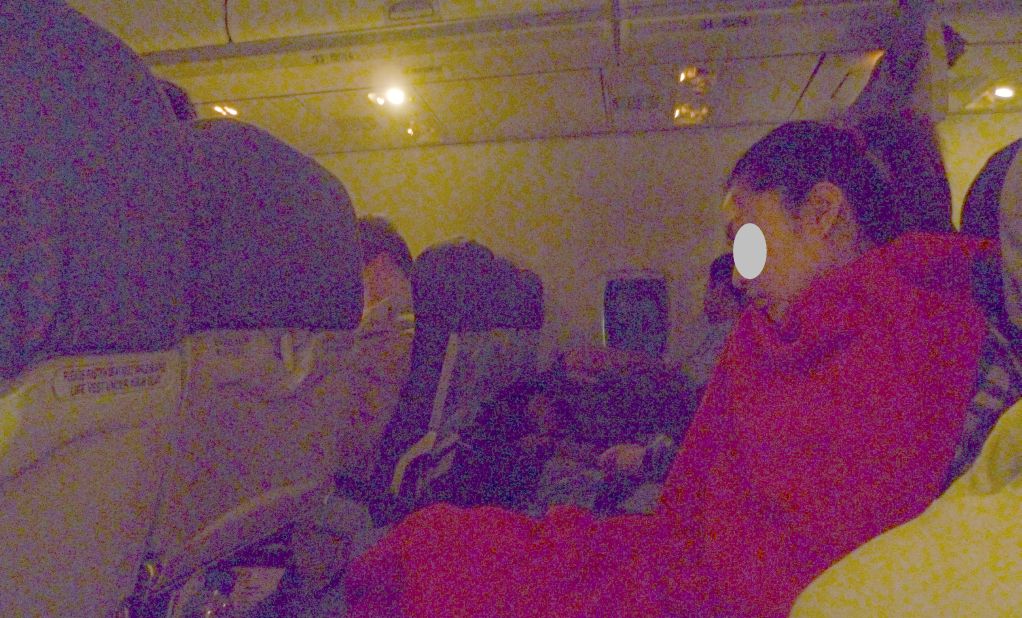 And as soon as the plane touched down, she rose, all the faster that she was not wearing a seat belt, to open the overhead luggage bins and put her blanket (it was indeed her own, not one of the aircraft), which obviously was urgent, and switch on her cell phone.

Let's go back to the original time line: there were two MU aircraft on the left. The lighting did not allow me to do much better than that, from a photographic point of view.

Take-off about twenty minutes late: it is the Friday evening rush hour. The IFEs broadcast an evening news program, with an inevitable report on the arrival of a new module of the Chinese space station, and announcing in the subtitles the hope for a future female Chinese astronaut.

And the arrival of President Hu Jintao in Cannes, not for the movie festival, but for the G20 summit, here next to a local celebrity.

Meal service: it is nearly 9pm, and at that time, many restaurants are already closed in China. This means that you should not expect much to eat on board a Chinese aircraft so late in the night.

Twenty grams: this is all there is to eat, and the choice between a 330cl bottle of water or 250ml of this local drink whose fame does not extend beyond the Chinese borders. At night, you can envy the cookies of another Skyteam airline. 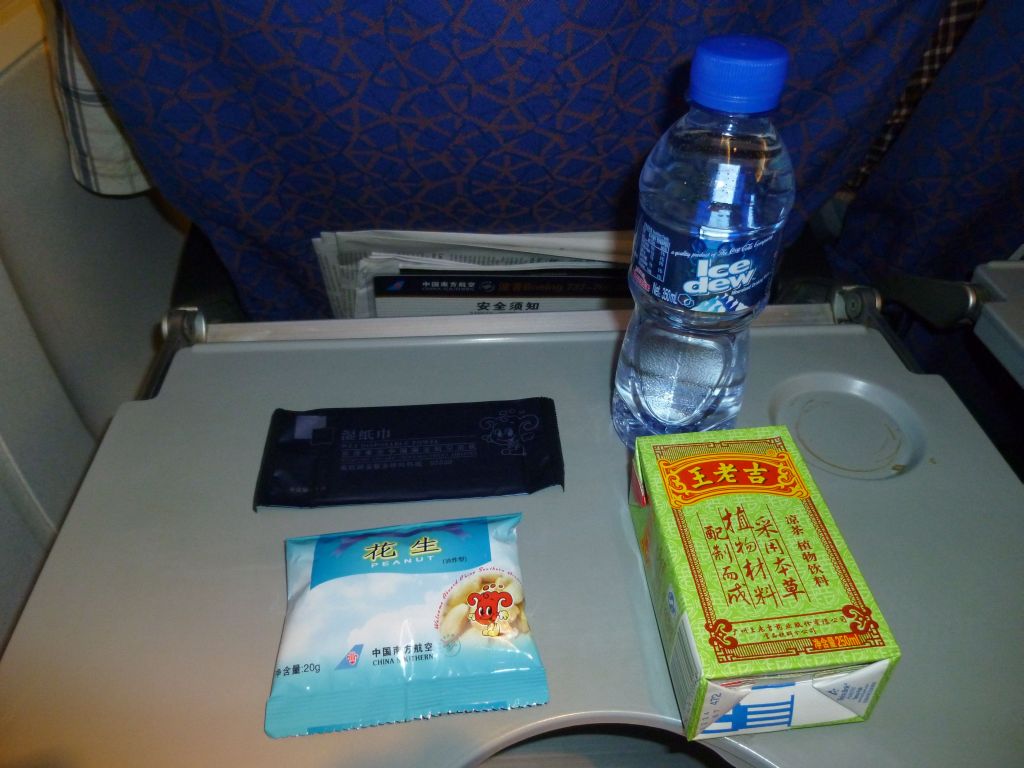 The flight attendants provided minimum service, and did not come back to collect the garbage, that had to be slipped somehow in the in-flight magazine pocket.
The lighting is very limited on Chinese tarmacs (like the streets of any Chinese city), which makes plane spotting very difficult with a compact camera. This is nevertheless a rare aircraft: of the two planes of Kunming Airlines, pushing back as my plane had just stopped pier-side, fifteen minutes late.

Walk through the wide terminal of XMN, and escalator down to the luggage delivery level. 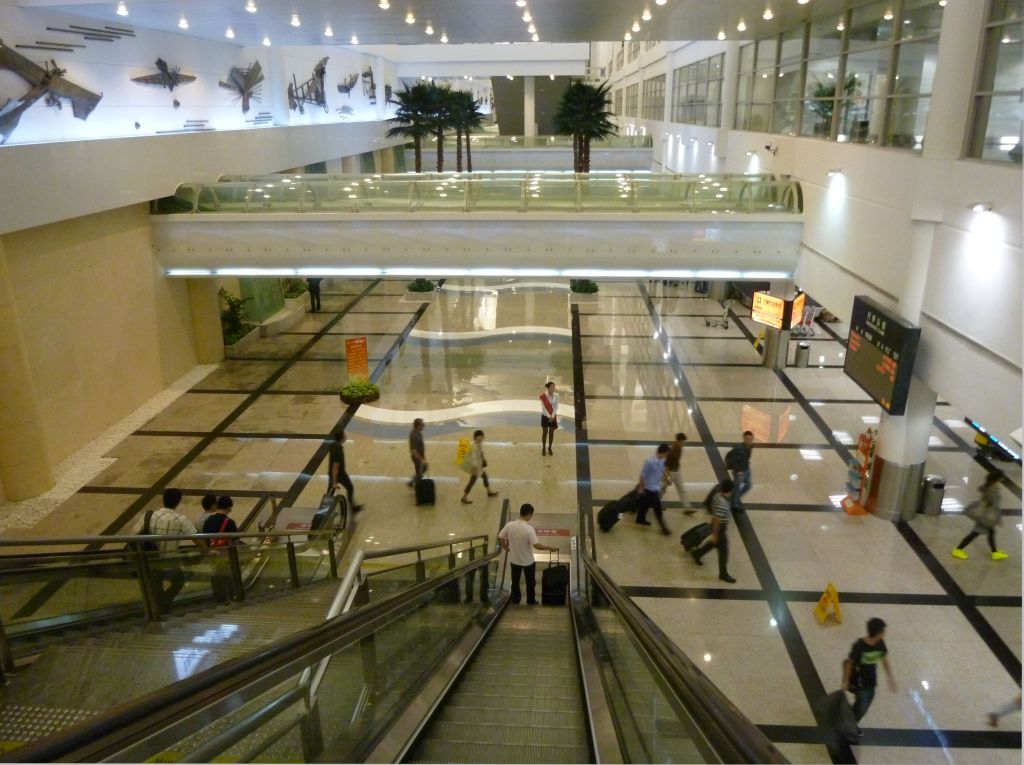 At the end of the escalator, this staff directs the passengers towards the luggage delivery area, to avoid taking by mistake the piano which is still in the background. 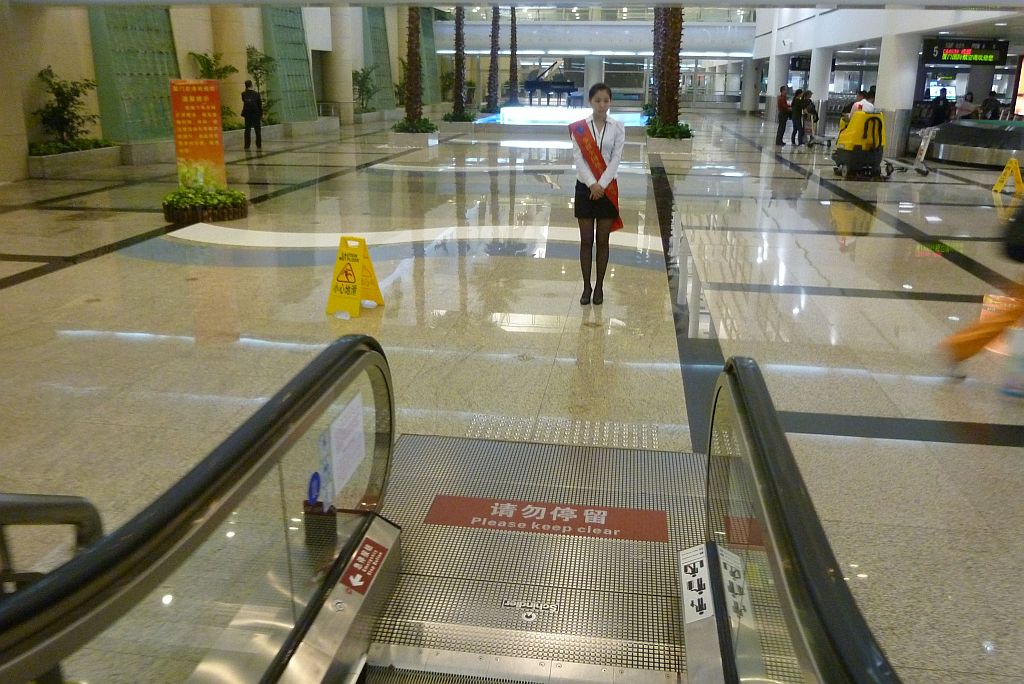 Not a very good luggage delivery performance: mine is among the last to arrive. 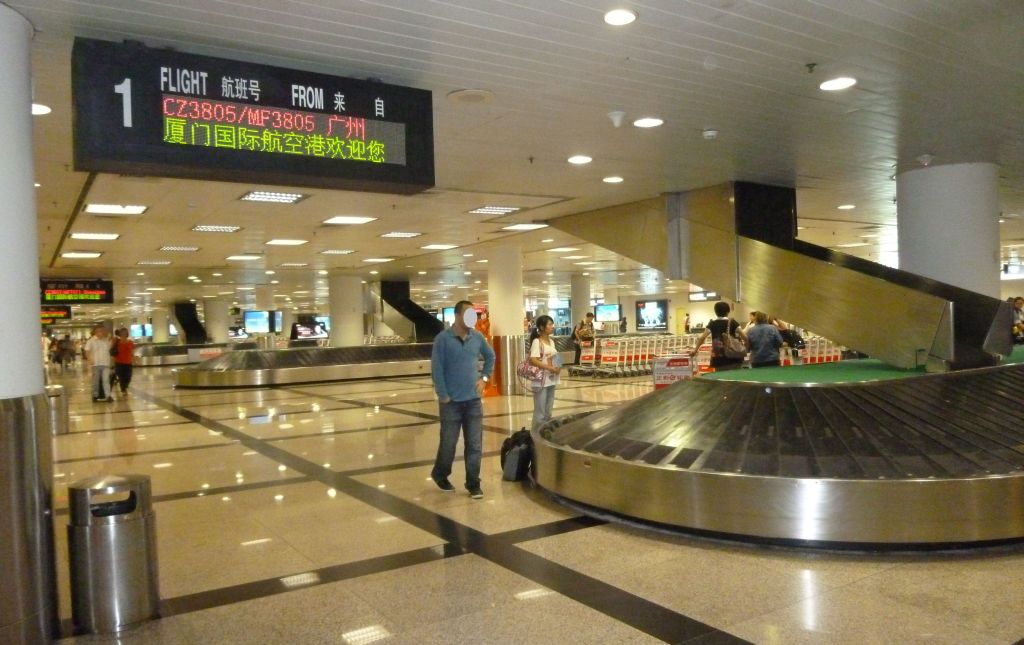 It is 10pm sharp when I took this picture of the waiting line at the taxi stand (it seems long, but it actually moved fast). 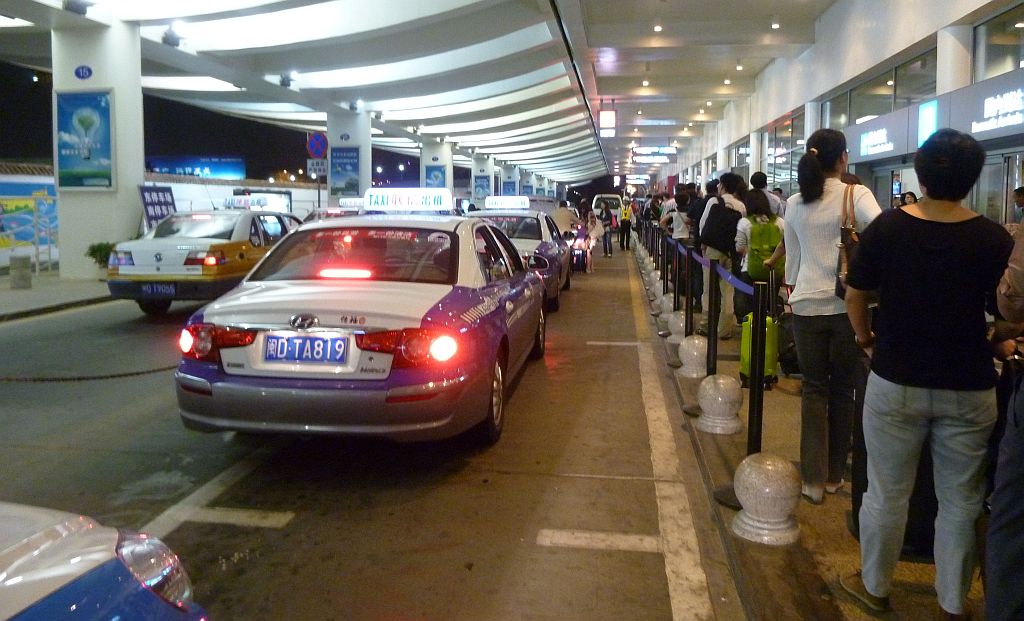 Do these bi-level green ferries which shuttle between Xiamen's city center and the picturesque island of Gulang Yu, a few hundred meters away, remind you of something? What is indeed the point in going to Hong-Kong, when you are fortunate enough to be able to go to Xiamen?

Like on the Star Ferry, the upper level is more expensive (5 RMB instead of 4RMB). I tested the business class on the way in. 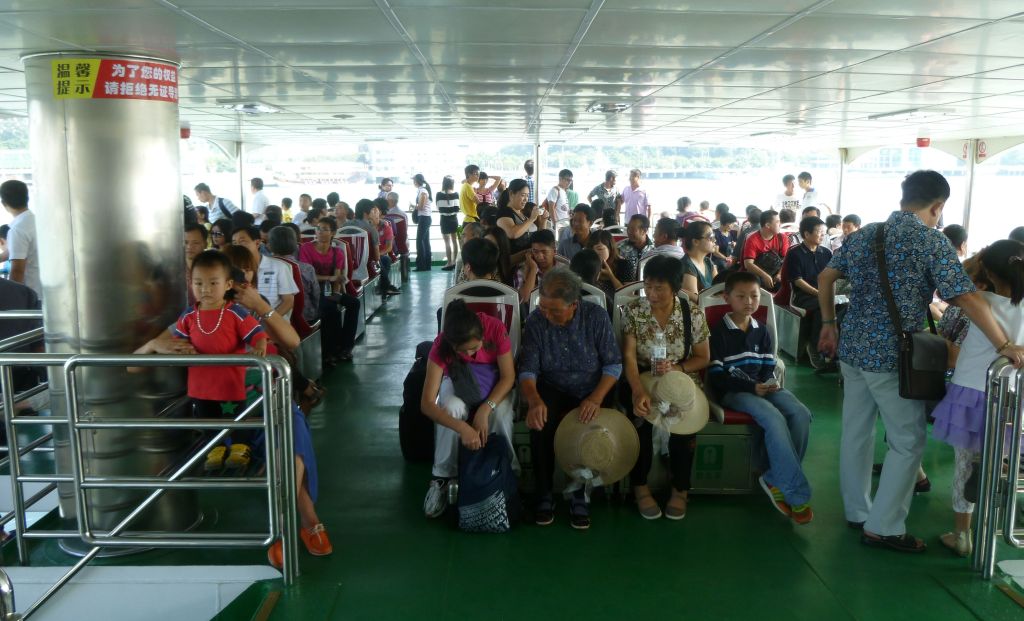 And the economy on the way back. It felt like the subway at rush hour, once all standing passengers had boarded. 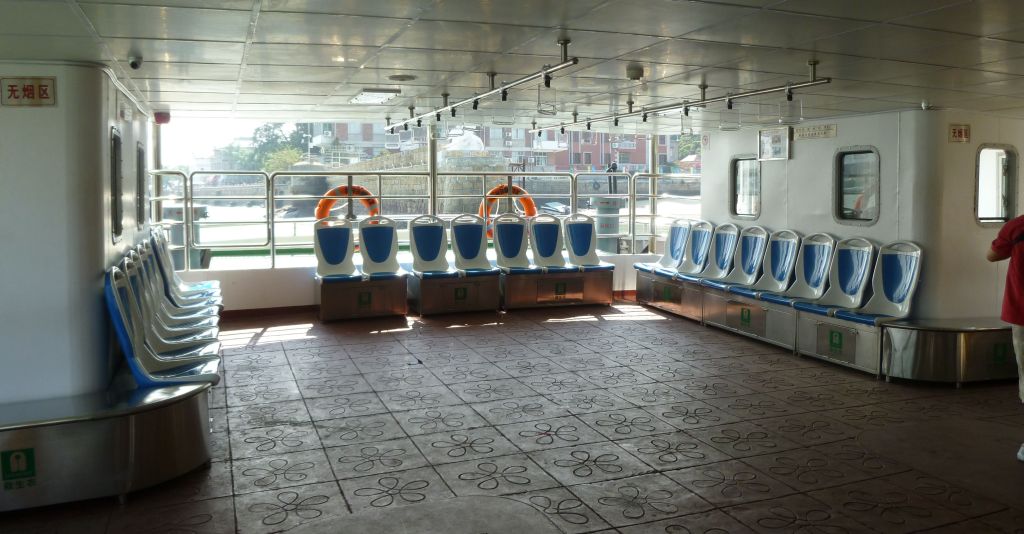 What is the point of going to the Riviera, when you are fortunate enough to be able to go to Xiamen, where the temperature is a comfortable 30°C in early November?

But note that nobody wears a swimsuit, because the Xiamen authorities remind everybody that the period from November 1st to 30st April is not adapted to swimming in the sea (Section VI). It is even extremely dangerous to swim during that period (Section I). I only saw three fearless swimmers in the apparently deliciously warm water. Trying to have skin cancer with long exposures to the sun is not a local tradition either.

What is a local tradition is to spend hours having your wedding picture taken in various attires, and you sometimes have to wait in line at the most favorite spots.

Nine brides are hidden in this landscape. Can you find them all?
See more

China Southern is usually one of the best airlines for Chinese domestic flights. But the offering is reduced in late evening (which is early in China), and unusually so on that flight.