#57 out of 71 Airlines A minimum of 10 flight-reports within the past two years is required to appear in the rankings. 40 reviews

By marathon SILVER 2582
Published on 15th September 2013
This FR is the return leg of my first day trip to Nangan, on the Matsu islands, posted in English here

Before seeing the first tip of a Dash 8 propeller though, you will have to go through a long advertising pitch, like in the movie theater. Why would you want so much to go to Nangan?

You may want to taste Matsu's famous alcohol, conserved in big pottery jars in the disused (military) Tunnel 88, or on the roof tops of that distillery. It felt that visit was incompatible with driving a scooter. The smell was pregnant even on the roadside. 112° proof spirit may be acceptable for the scooter engine, if not its driver. 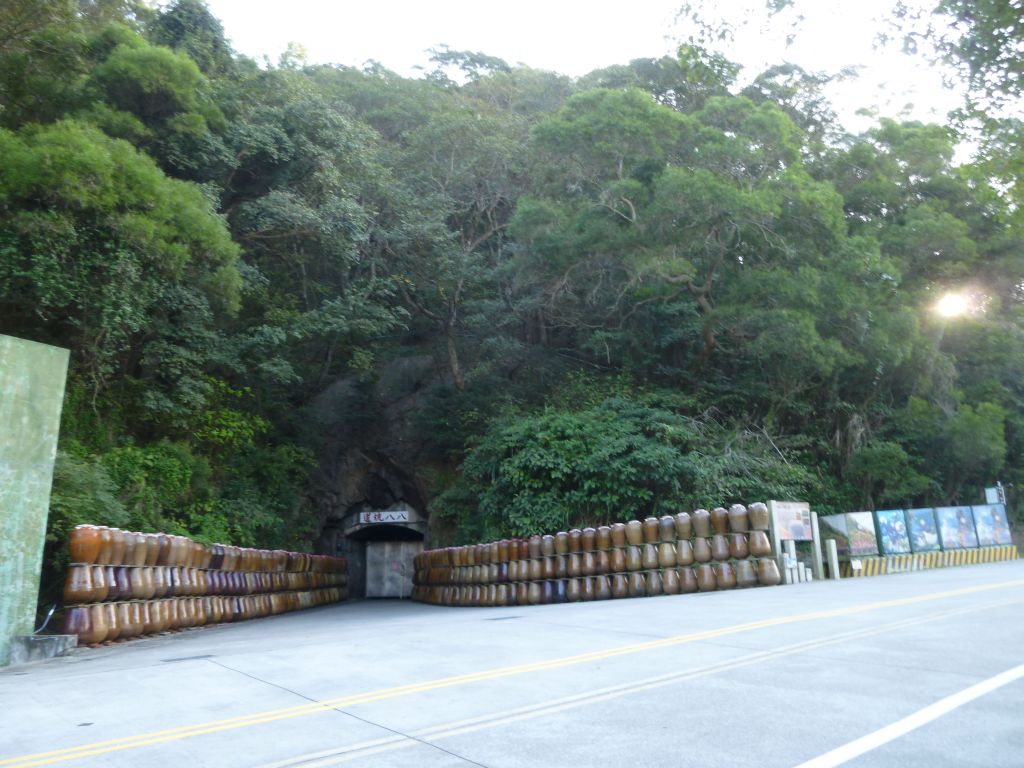 You may want one of Taiwan's most beautiful temple dedicated to the goddess Matsu, Queen of the Skies and patron saint of the sailors, civilian and military alike. 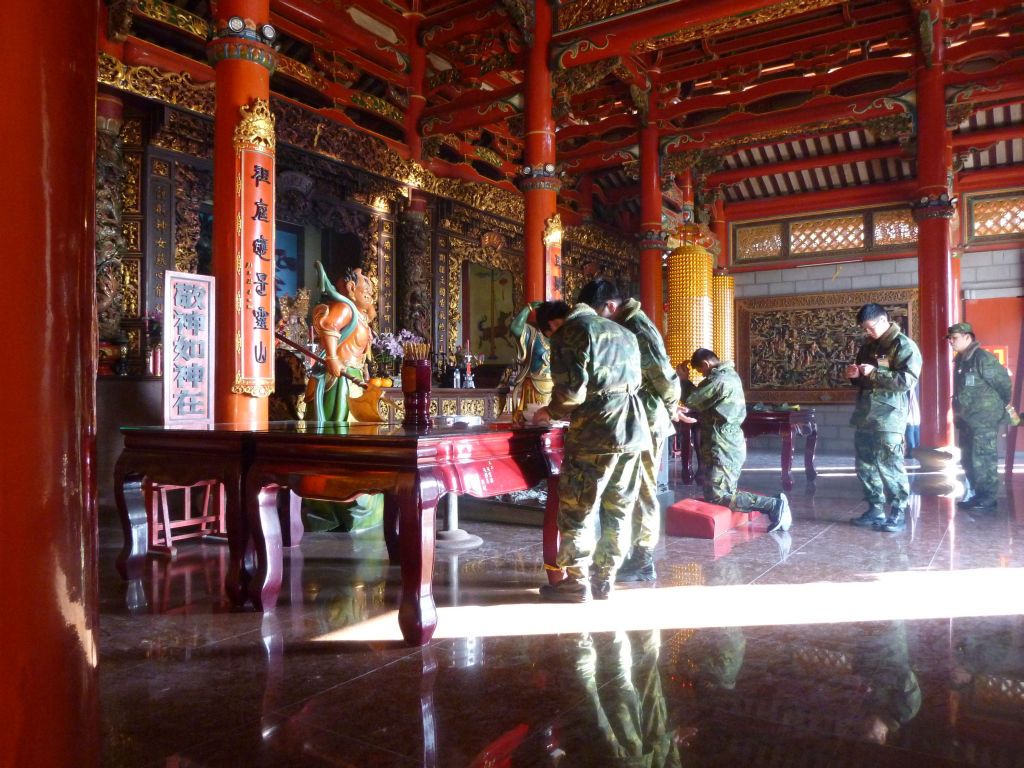 You may want to see the largest statue of Matsu in the world, originally a semi-legendary 11th century woman who gave her name to this archipelago (with a minor ideogram change)? 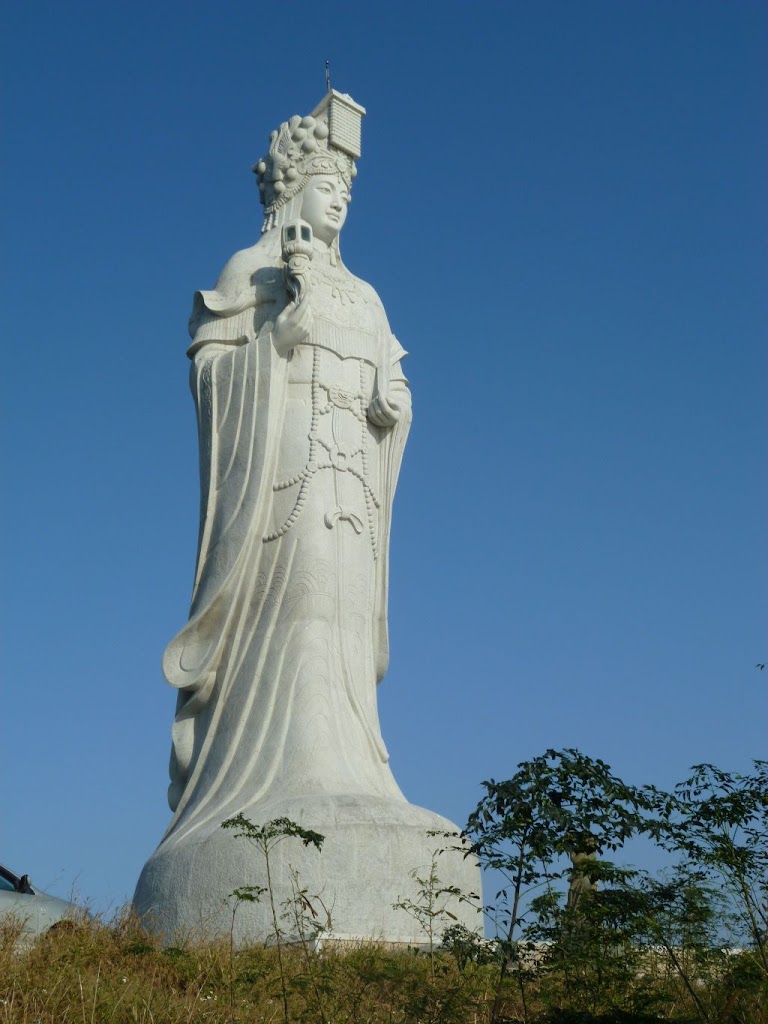 You may want to remember that sailors, airmen and soldiers of Taiwan's armed forces, rather than Matsu, defended Nangan against the attacks of Mainland China?

You may want to visit its underground fortresses dug in sheer rock with crude tools and manpower, including this incredible James Bond like underground naval base which protected the Taiwanese speed boats.

You may want to search and find (with some difficulty) the ruins of this military brothel, which is now used as a hen pen.

You may want to see the famous giant motto Sleep on spears waiting for dawn which dominates the harbor of Fu'ao, reminding all of the ultimate goal of conquering back the Mainland. 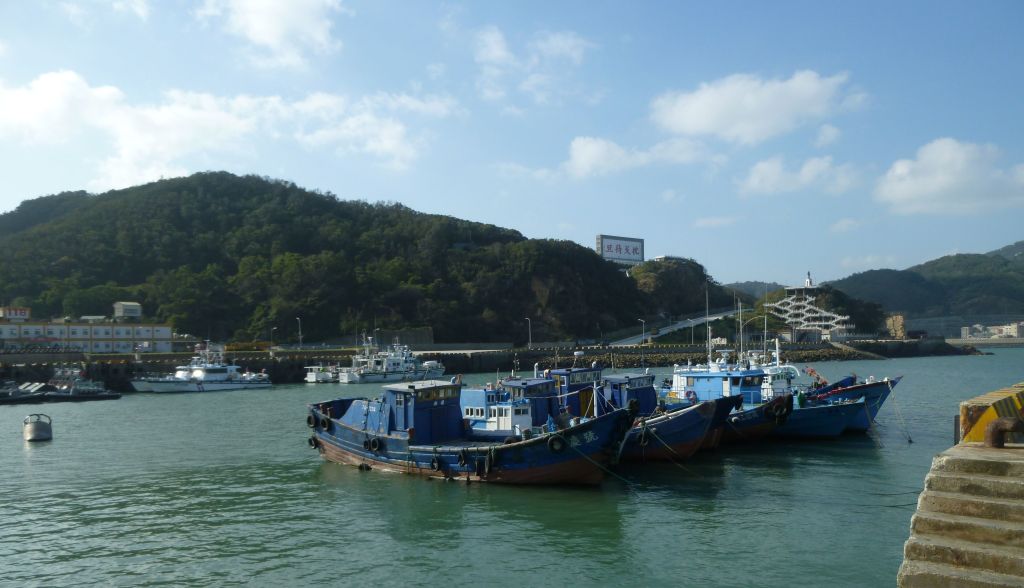 You may want to see the Chinese coast beyond Matsu's statue, only twenty five kilometers away and seemingly so close on a cold dry day. 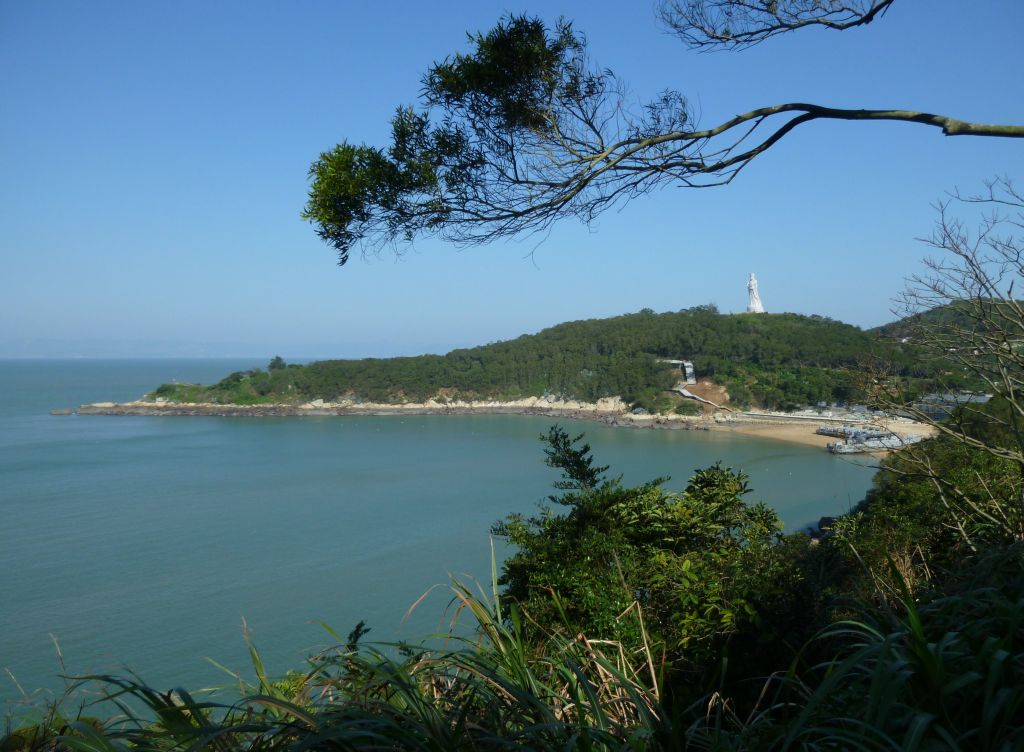 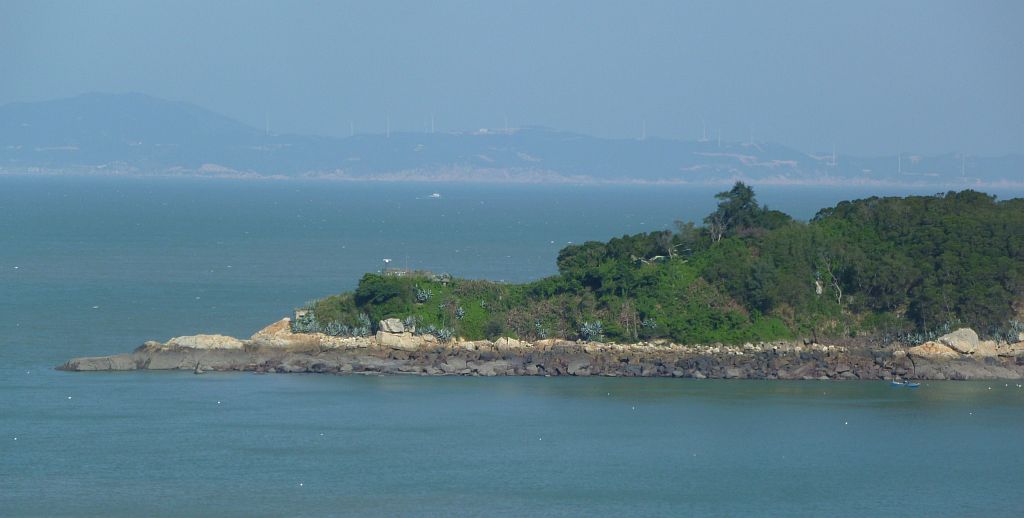 You may want to drive all the way to the top of Mount Yuntai, do discover one of the more spectacular panoramic landscapes of Taiwan. Where else in the world can you see two countries and the runways of two airports at a glance? 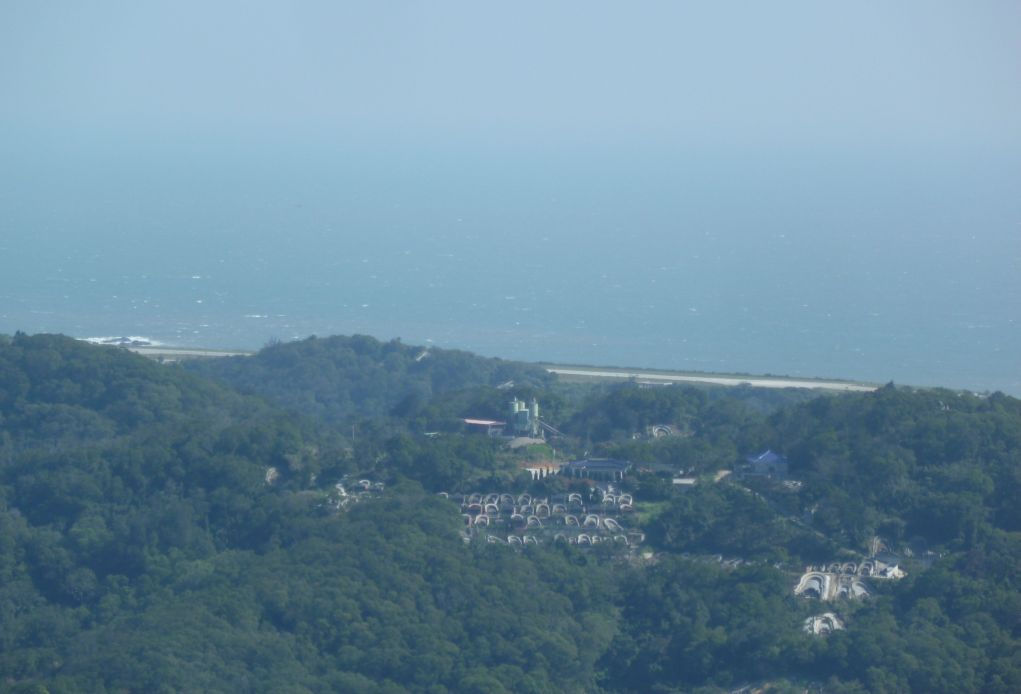 You may want to call you friends in Mainland China using a Chinese SIM card on the network of CMCC, at Chinese domestic prices. 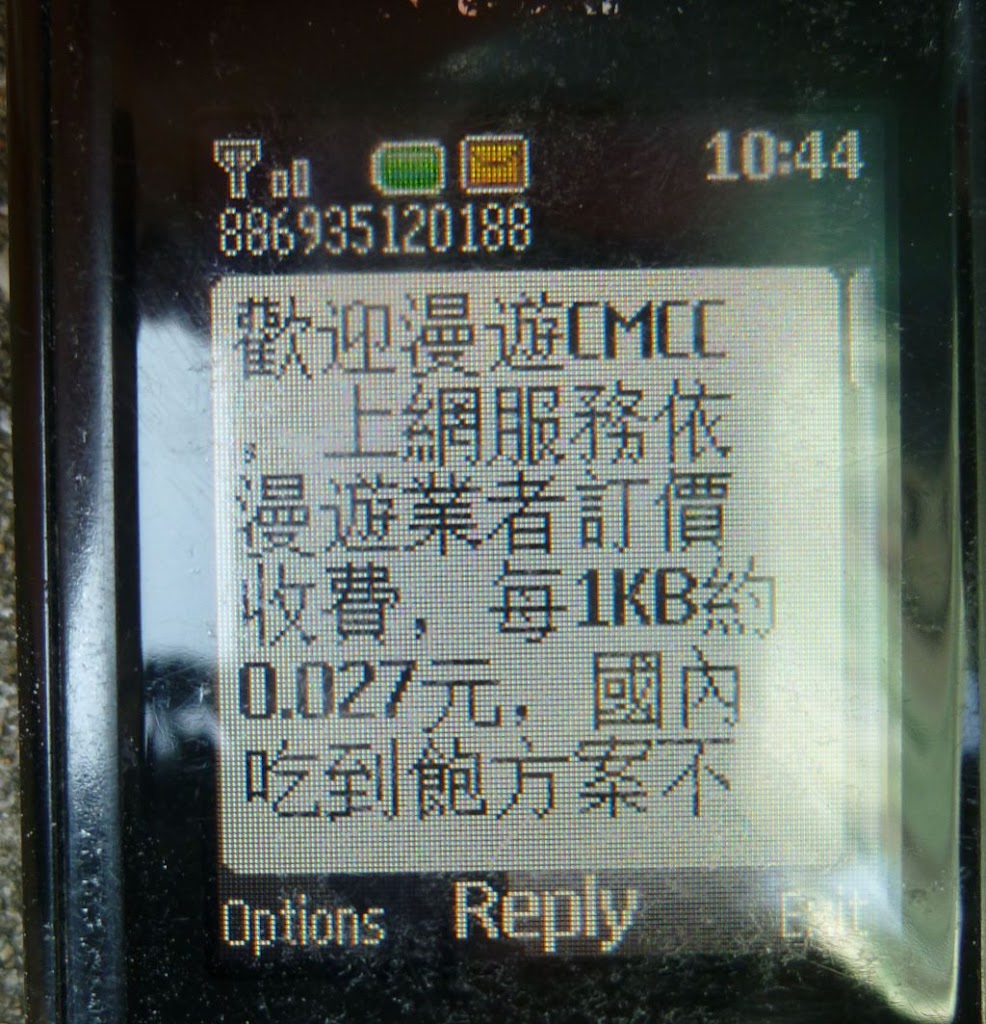 If the weather is right, you definitely have no excuse not to have the alarm clock ring at 5 am to go to Nangan.

Especially since the very cloudy with some sun weather forecast changed into bright blue sky without a single cloud once there.

Uni Air has a monopoly on the flights to Matsu (the market is too narrow for two airlines anyway) and its website is in Chinese only. That reduces the number of foreigners on its flights, although Taiwanese travel agencies may be able to sell tickets on these flights.

I did not try a travel agency, I had bought my ticket on line. After return the scooter, I could have walked back to the airport (a healthy quarter of an hour, mostly uphill), but since a taxi stopped for me, I invested 100 TWD for a taxi ride that I did not regret. It was roughly 16:25 and the pleasant female driver asks me:
- You are on the 16:40 flight?
- No, on the 17:20 flight, there is no rush
- Oh, you could have a seat on the 16:40 flight!
- Really? That late?
- Yes, you should be able to make it, just ask at the counter.

Had I walked to the airport, I would definitely have reached it too late, but at the counter, when I asked if I could take the flights which was leaving less than quarter of an hour later, the employee made no difficulty and shouted towards the security check: 還有一個人! There is another passenger!. 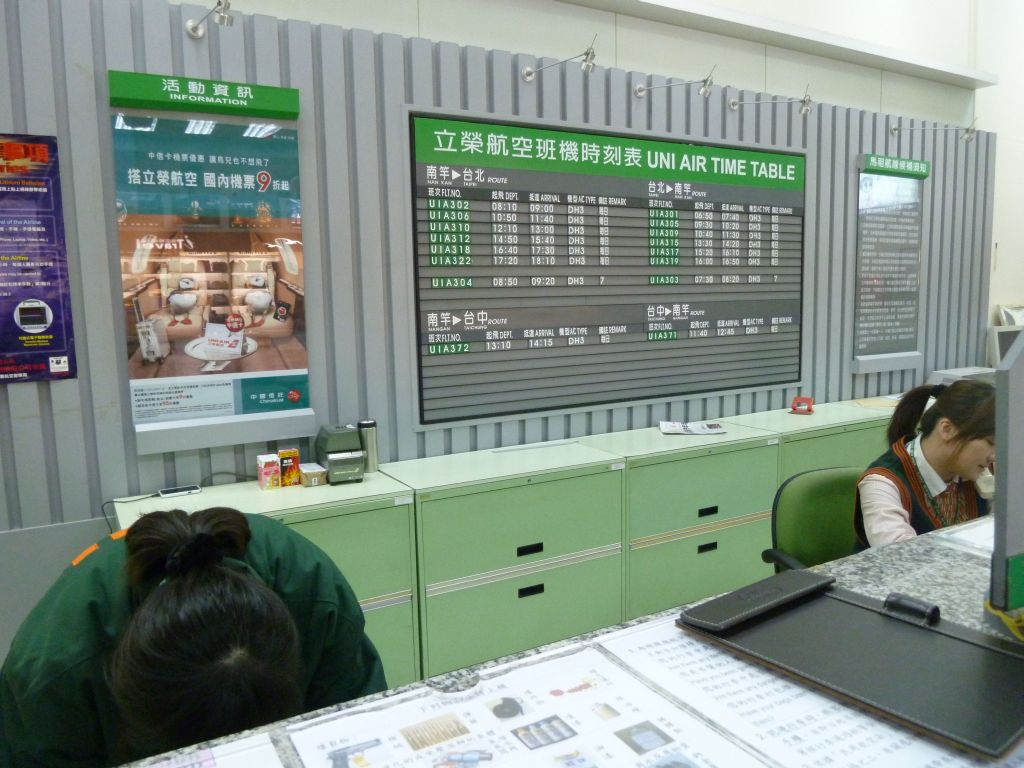 Nangan safety check is not severe. I showed my half-empty bottle of water:
- Do I need to leave this?
- No, don't worry.
The gantry rang; small surprise since I still had my keys, camera, phone, etc.. with me, but the policeman let me in without comments.

Going like a breeze through all controls like in movies is standard when your boarding pass number is 007. 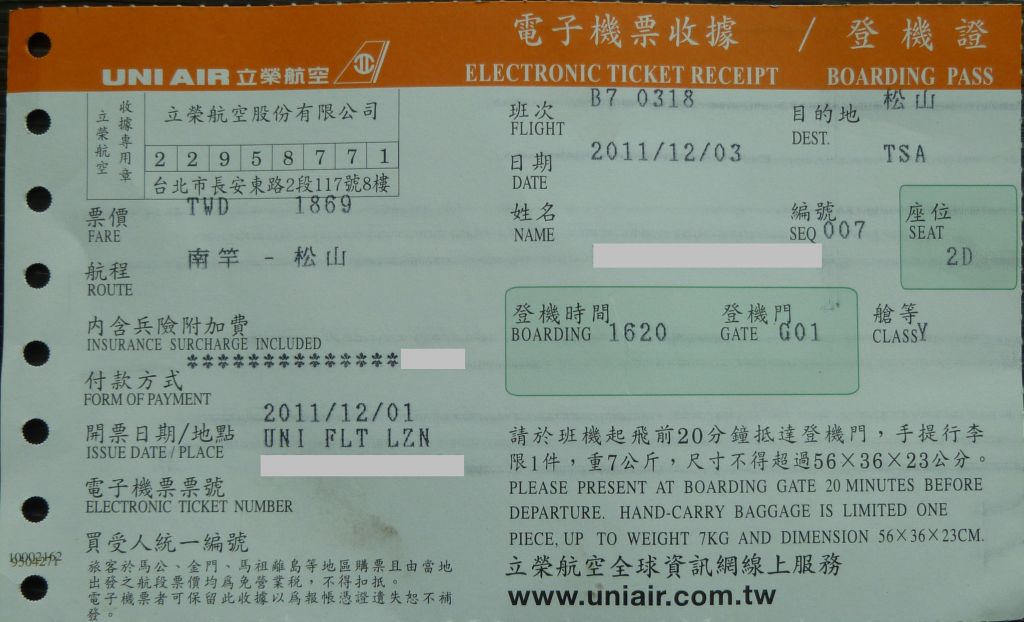 You see here near all the passengers on that flight, which was not the last of the day in the middle of the week-end. The so-called duty free shop is amusing, in an airport which may never have international flights, even though it is ten kilometers away from the sea boarder with China. 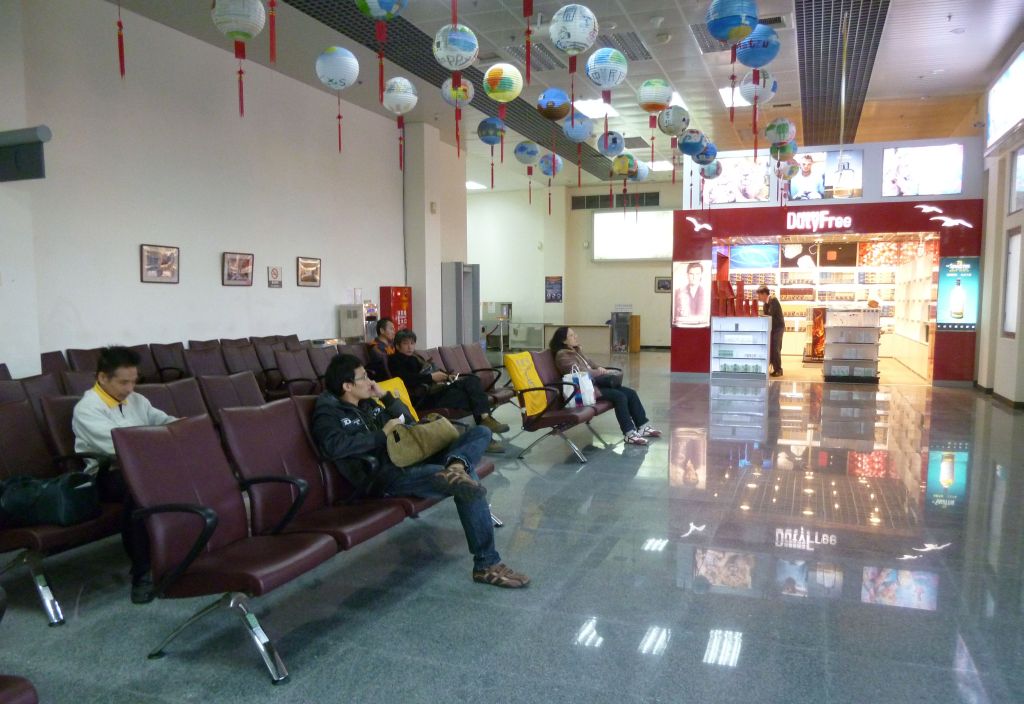 We waited until the end of the unloading of the plane which had landed at 16:10, more freight than luggage. 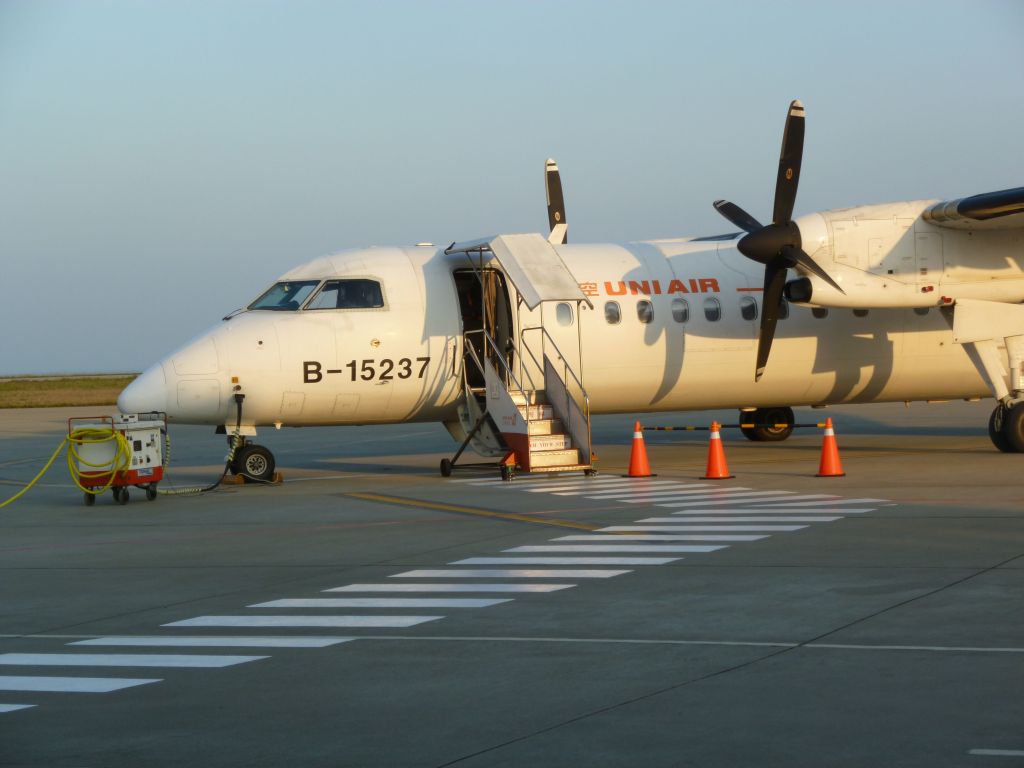 … before boarding, following the foot path painted on the tarmac. 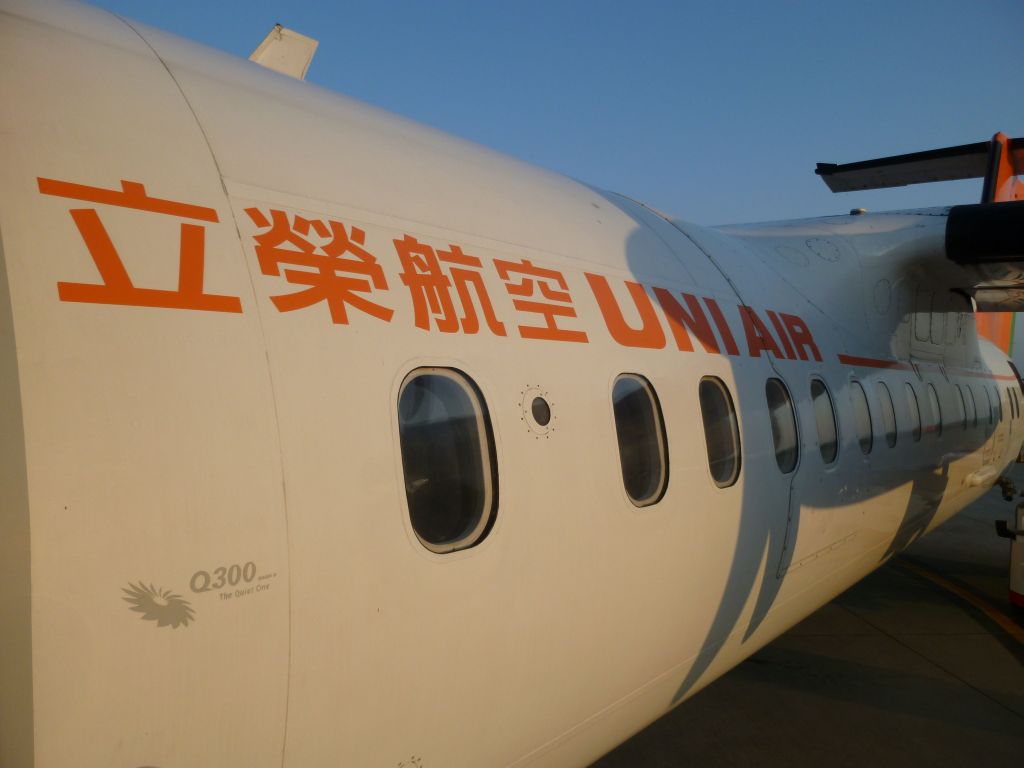 This is the cabin after boarding was complete. I am in seat 2D (window seat on the right, the best side for landings in TSA); there are two passengers in rows 2 and 3 on the left. The FA/PAX ratio was beyond a trade union leader's wildest dreams. 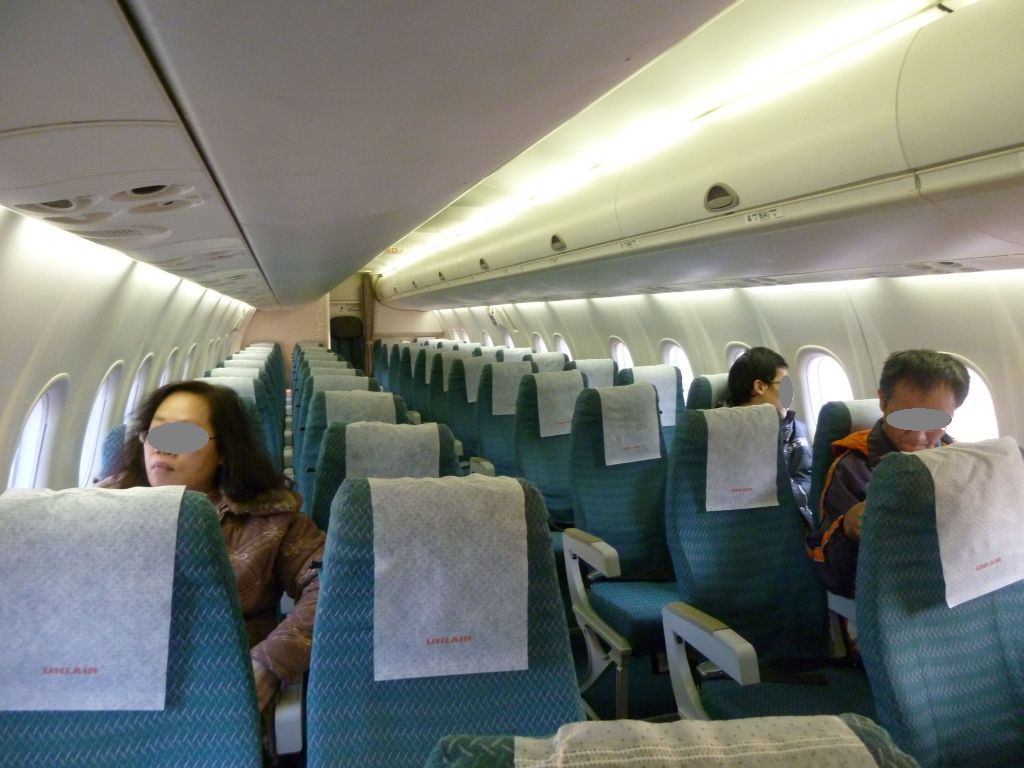 Before the door is closed, a picture of the two seats in Row 1 in the reverse direction, leaving enough space for the emergency door on the right, and the FA's jump seat. 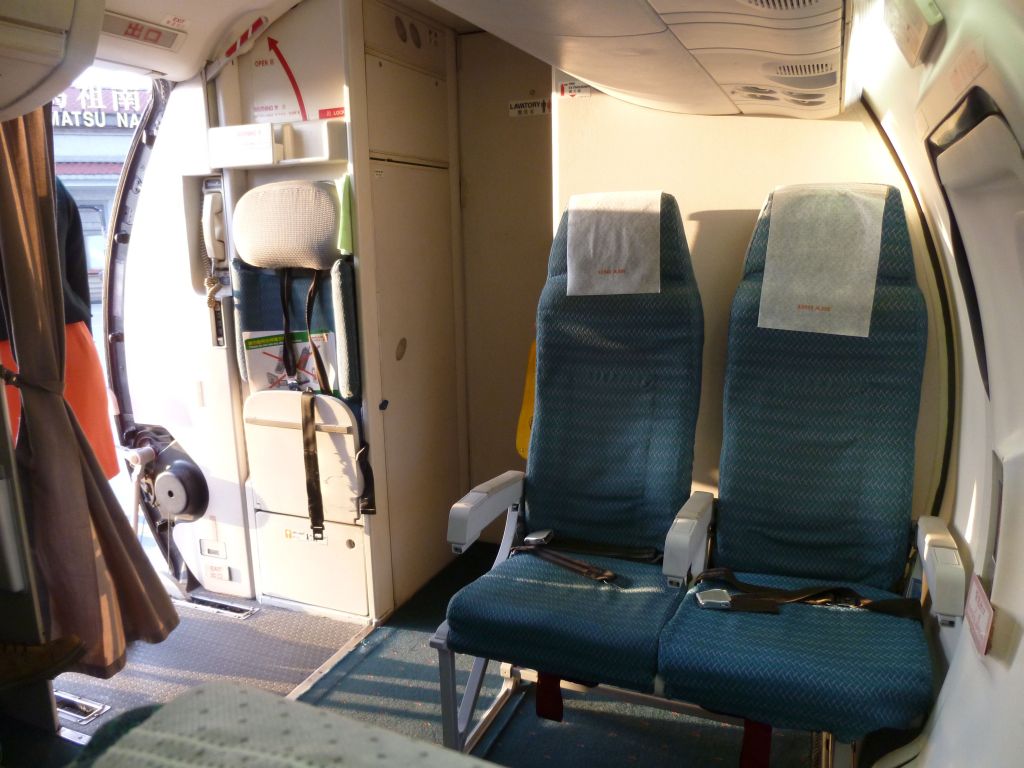 The take off and climb are very since the plane is quasi empty, and once we had reached the cruise altitude (7,000 feet, according to the captain), an FA came with notepad to take the orders of each passenger for drinks. OK, the choice was only between green tea and coffee, but in which airlines do you have such a personalized service in economy? They came back, one with a tray with seven paper cups, the other with refreshing towels. Too bad any pictures are forbidden in flight, this was an unusual scene. 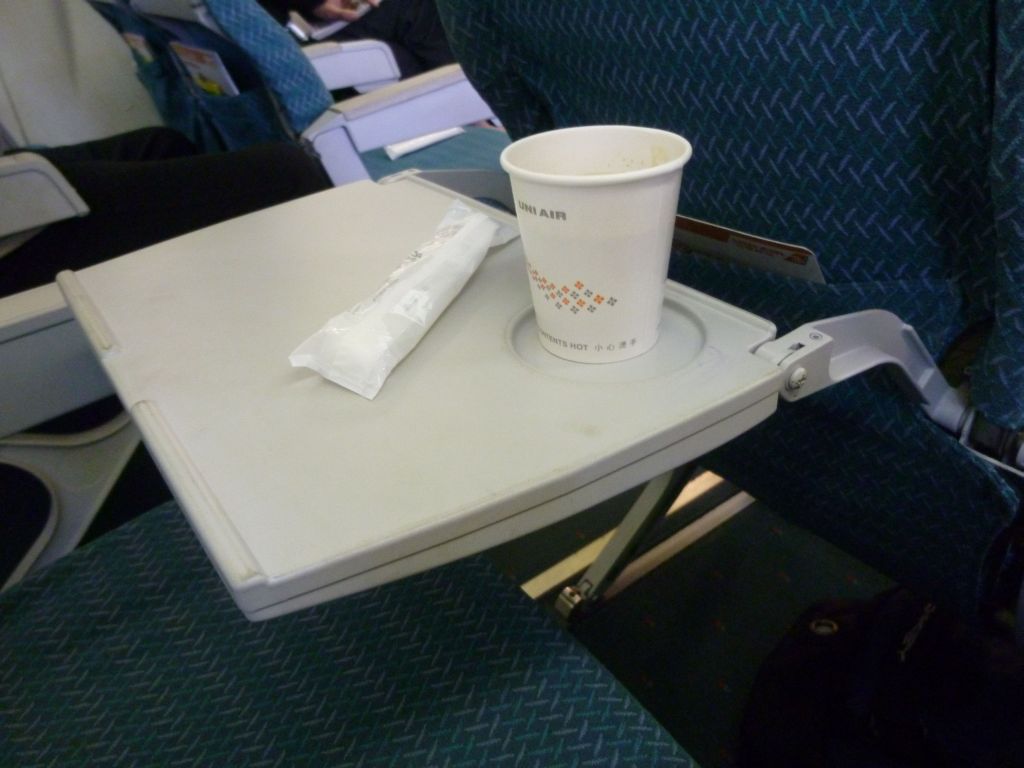 By the way, during a flight to KNH (Kinmen), the FA mentioned the penalties in case you use electronic equipment during a Taiwanese domestic flight: no less than 250,000 TWD and five years imprisonment! I presume that in order to get that, you must have crashed the plane's avionics with a highly customized Wii, while taking super-telelens pictures of sensitive sites with a blaring radio set for comfort.

On that flight, as soon as they had done with that evidently extremely quick service, the FAs took refuge in the tiny galley in the rear behind a curtain. From my point of view, that was an excellent idea, since I did not need to hide to take pictures.

Granted, despite Bombardier's claims (The Quiet One slogan painted next to the door), the turboprops of a Dash 8 are much more noisy than the rear mounted engines of a business jet, but the mood was nevertheless really business jet-like. 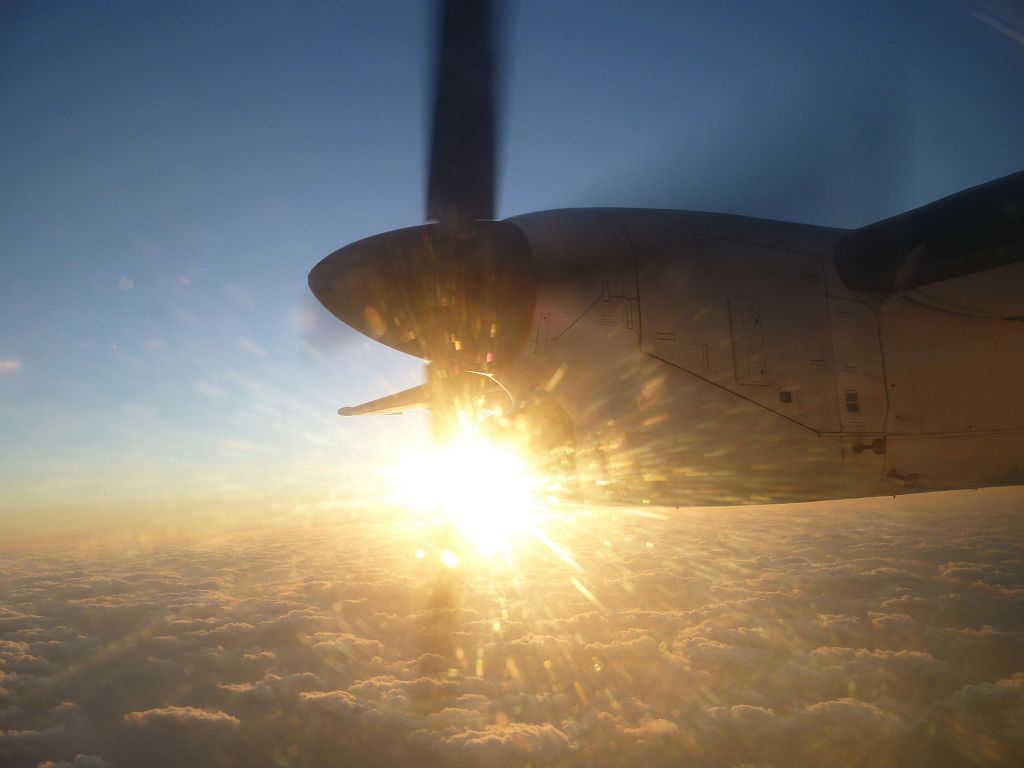 Taiwan's coast and mountains are in view. 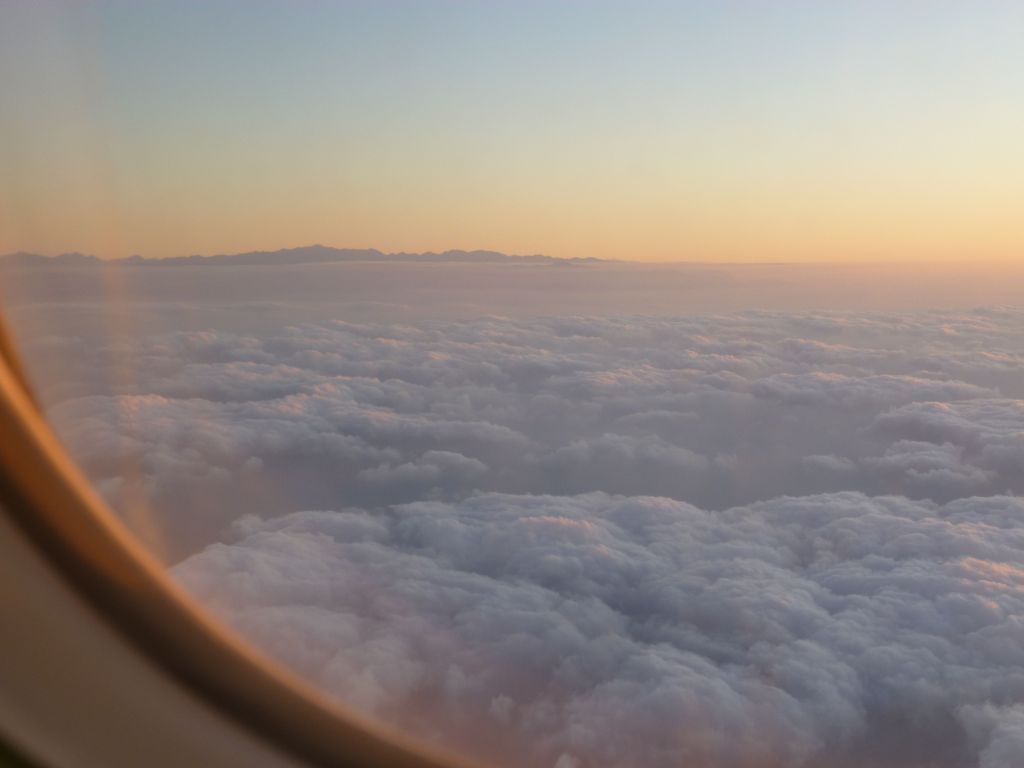 Sunset on a sea of clouds and water. 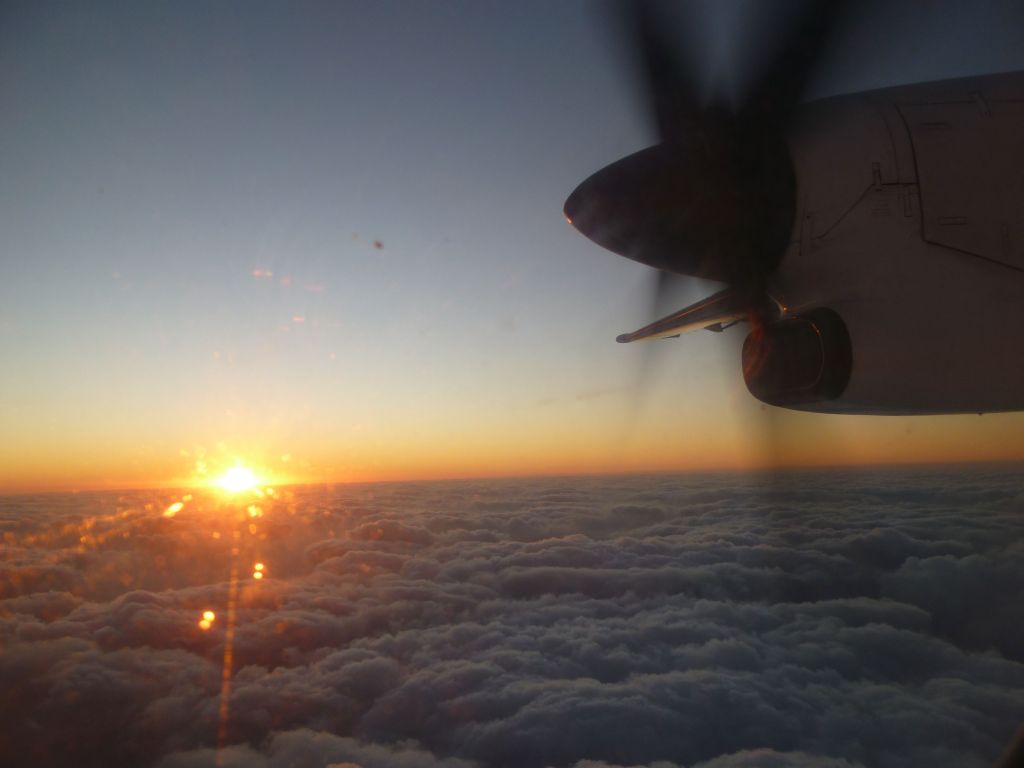 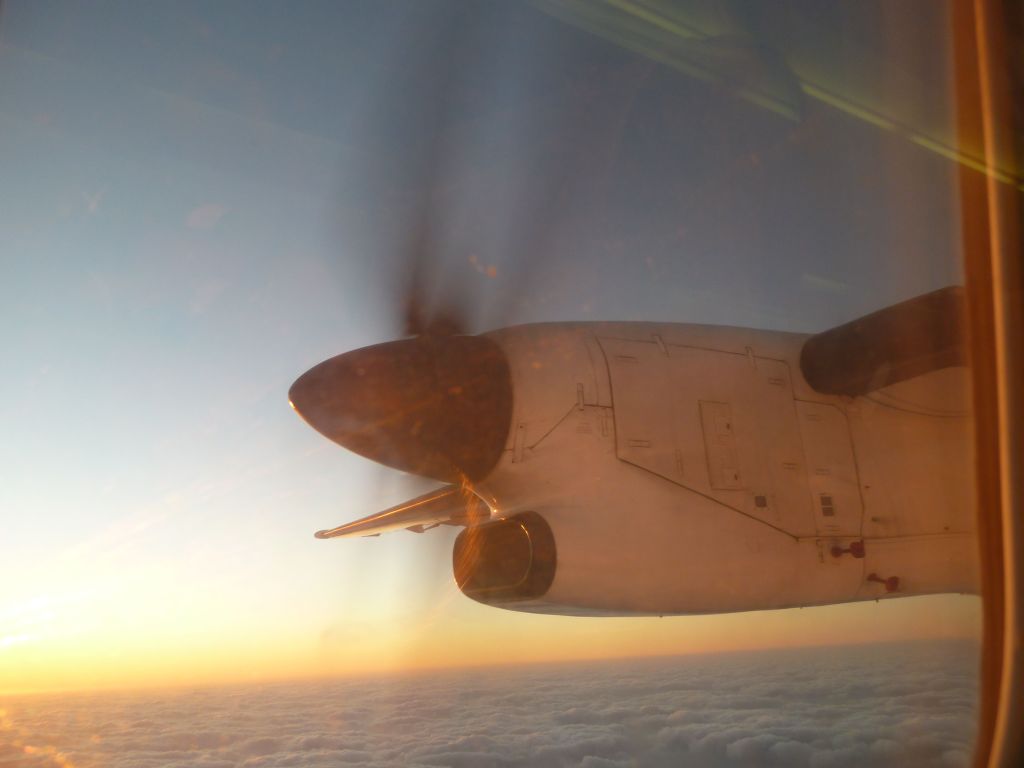 The weather was very overcast on Taiwan (remember that the point of that day trip was in part to find good weather in Nangan) and the sun was setting. Contrast and lighting were therefore minimum; too bad because there was an excellent view on Taipei, but anyway, I was originally scheduled to take the next flight at night.

A single picture of the approach, which you may not recognize, but these are the viaducts of the future subway line towards TPE, supposedly scheduled for opening in summer 2014. I am not privy to the present work progress details, but I encourage you not to wait until it opens to visit Taiwan, because all rail projects in Taiwan have been dramatically late, no matter if it was subways or a high speed line.

The final approach is always spectacular, especially if you now the place, because you land in the middle of the city, but it was already too dark for pictures. I had no time to take better pictures of the plane on the ground, because the passenger bus was waiting for me. 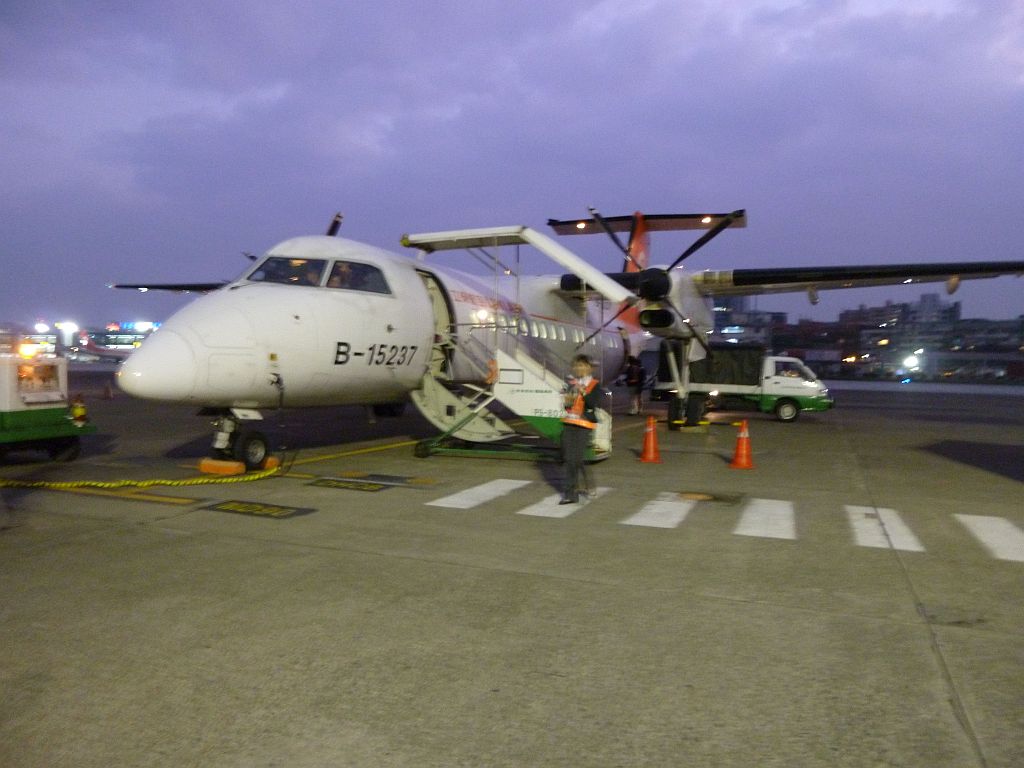 Passenger bus, or extra large limousine. First class service continued on the ground, with this dramatically oversized vehicle with had more seats than passengers; 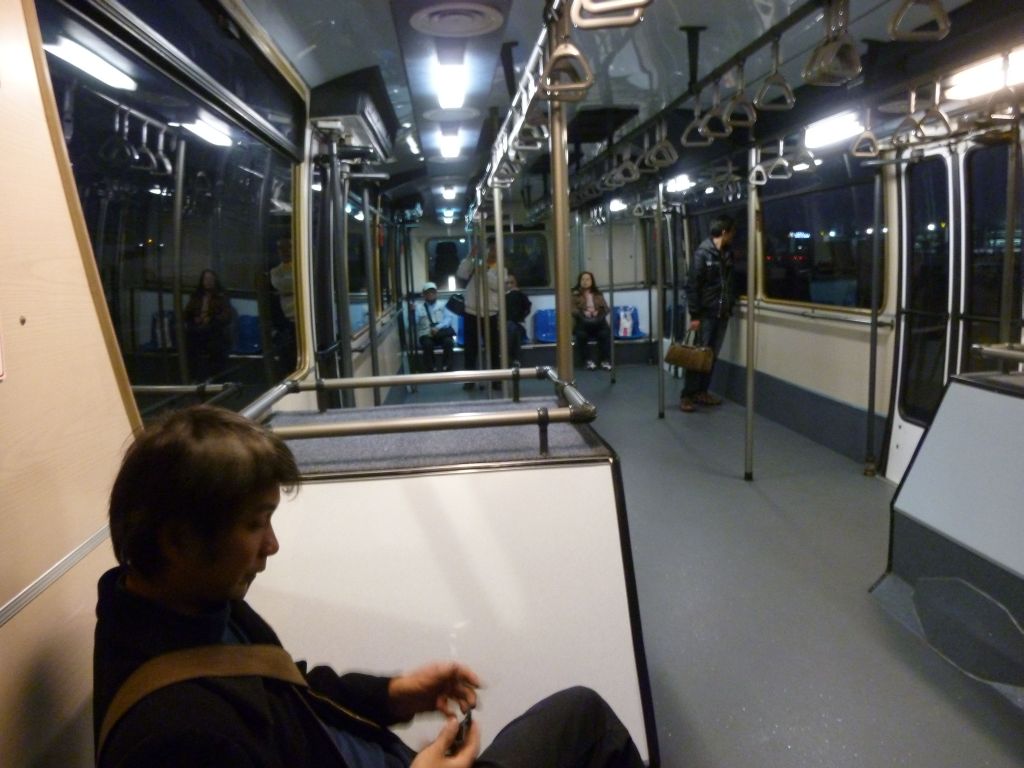 A last look at the two terminals of TSA before taking a bus home. 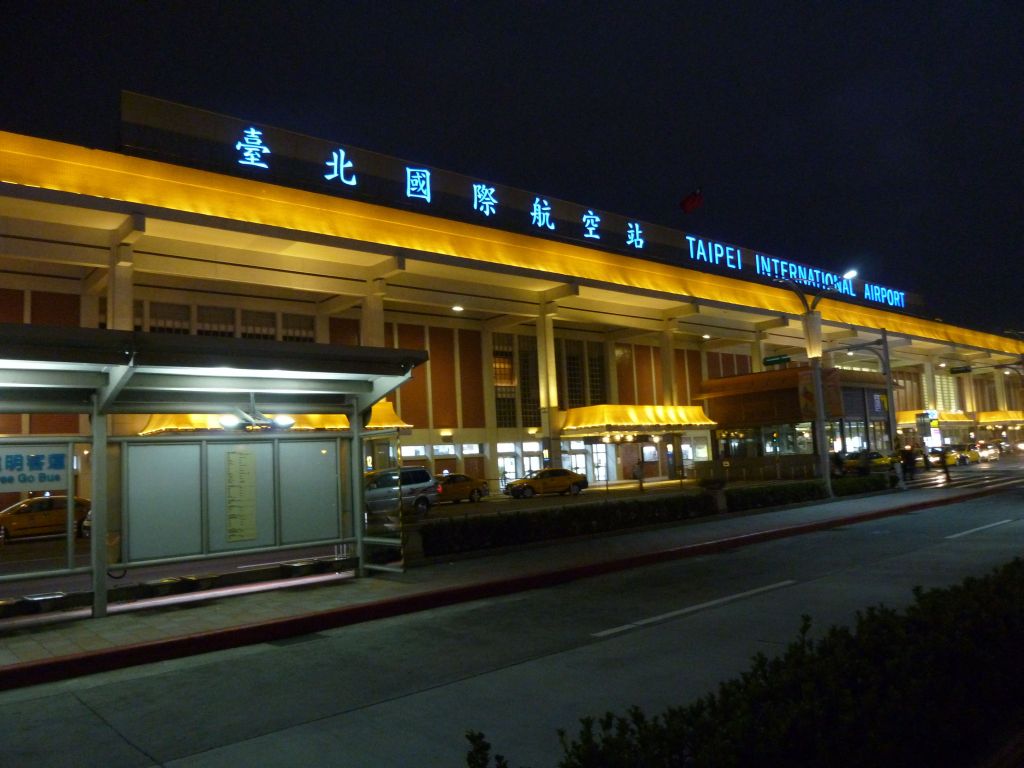 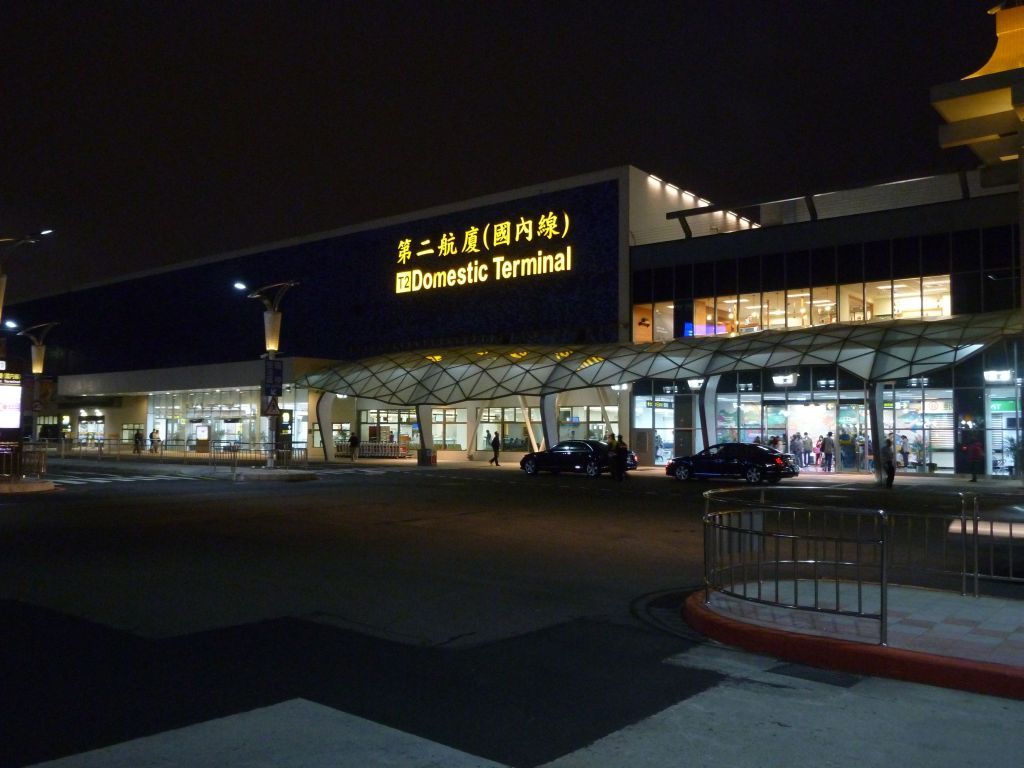 It had definitely been a great day.
See more

This is was an unusually empty flight from an unusual place operated by an unusual airline. I loved it, because I equally enjoy flights which are unusually comfortable or where everything goes wrong. Believe me, some Uni-Air flights went quite wrong – but safely so – see some other FRs that I translated into English. The rating of that flight is of course on par with the quality of that experience. The drink served in flight was the same as on the way in, but on the return leg and for 1869 TWD, I had first class service and service.

The airline with the best average rating is Uni Air with 7.1/10.