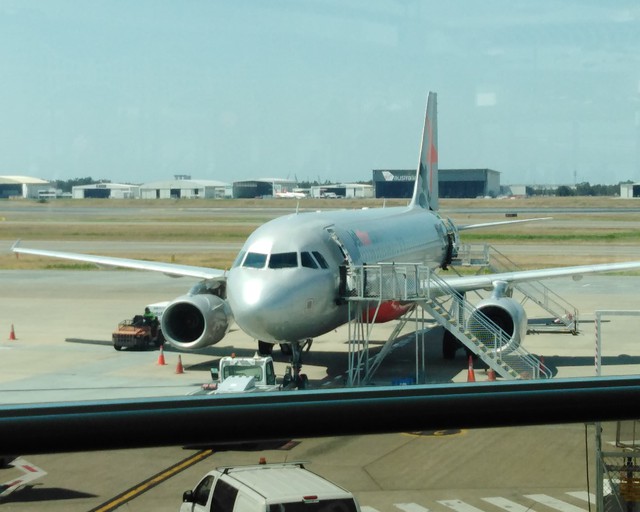 Hello and welcome to my second trip report. This report has significantly more photos than the first so hopefully it is of a lot better quality.

BACKGROUND:
I decided to take this flight to visit a relative in Townsville at the last minute and after about half an hour of scouring the internet for the cheapest prices I soon realised I was not going to find anything better than Jetstar's $215 return. So I booked my ticket two days out from the flight, and in my opinion the fares were fairly reasonable. Jetstar operates two daily rotations between Brisbane and Townsville, one morning departure JQ904/905 and an afternoon departure JQ906/907.

AT THE AIRPORT:
I arrived at the airport as excited as ever for the days flight, as it had been over six years since I had flown Jetstar or the Airbus A320. I had already checked-in online as soon as I received my booking itinerary (about an hour after paying for my ticket), as Jetstar allows passengers to check-in online up to 28 days before their flight which I found convenient as I had no luggage and did not fancy waiting in the check-in queues at Brisbane Airport. As I had already checked in I proceeded past the lines of check-in desks and then up the travelator towards the departure gates. Security was cleared within no time, I usually find the Multi-User security checkpoint (used by Jetstar, Tigerair, Rex, Fly Corporate, Alliance and Hevilift passengers) is always a lot quicker than the Qantas and Virgin Australia security checkpoints, just a tip for next time you're flying out of BNE :)
After clearing the security check, I scanned the departure screens and found my flight JQ906 to Townsville was scheduled to depart through Gate 28 and was thankfully running right on time. I then proceeded along the long glass walkway between the main terminal building and the multi-user concourse (home to Gates 26 to 35) where I found VH-VQP, a 14 year old Airbus A320-232 which would be operating my flight to Townsville, the aircraft has spent its whole life flying for Jetstar: 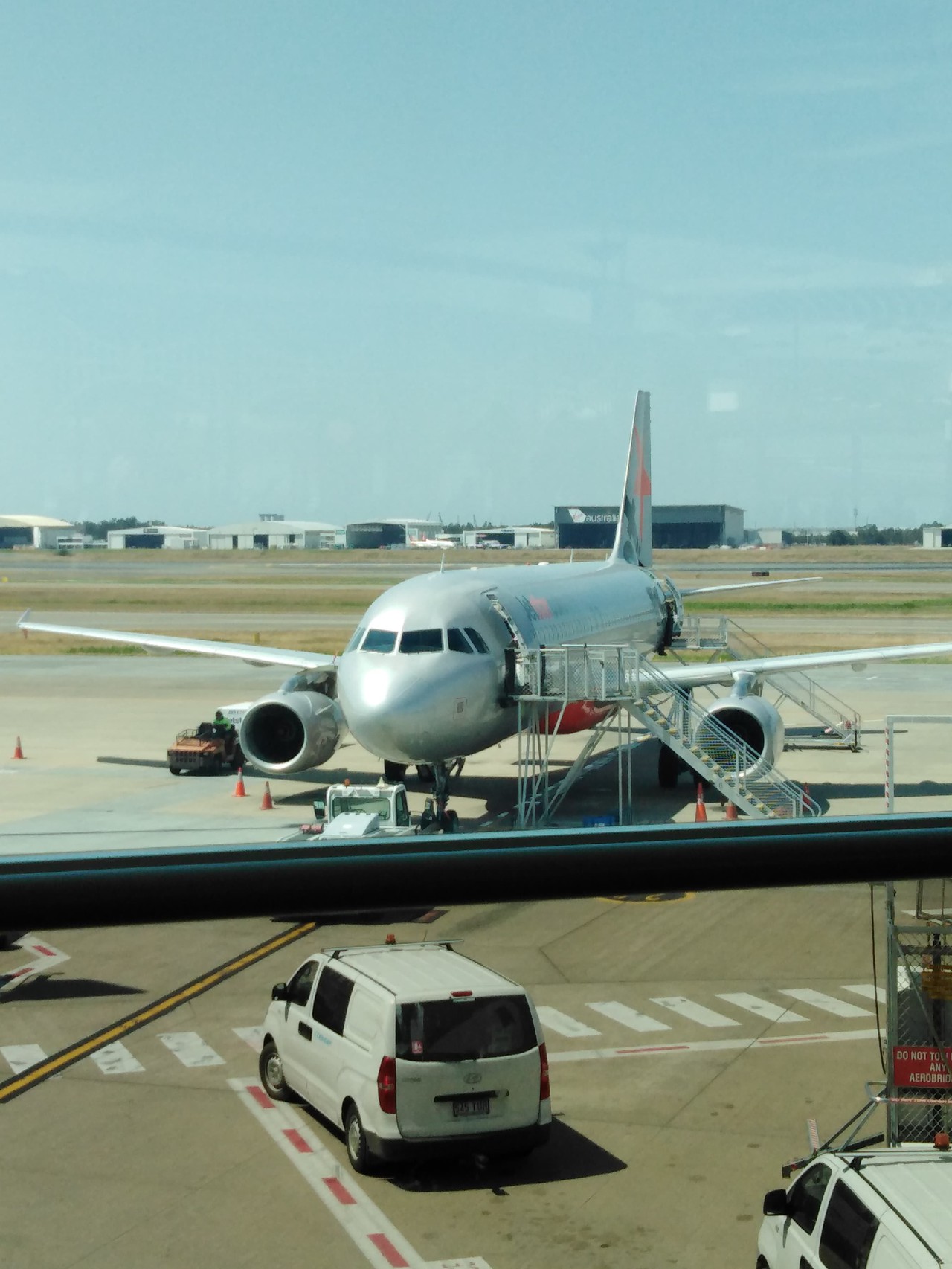 BOARDING:
I had arrived at the airport nearly 2.5 hours early in order to spot some of the morning heavy departures to Asia and the Americas before my flight so the time passed very quickly and before I knew it boarding was called. Jetstar does not offer priority boarding for passengers, although of course any disabled or elderly passengers requiring the wheelchair lift are boarded first with priority. Boarding at the gate was a little chaotic with many passengers pushing to get to the front of the line, like c'mon people you're all going to get on the plane, just wait patiently.
After having my paper boarding pass scanned, I then proceeded down the ramp onto the tarmac, then up the forward air-stairs into the A320 where I was greeted by the friendly cabin manager. I was among the first people to board the flight and I quickly settled into my comfortable window seat 9A. There was the usual short delay, however, as people shoved luggage into the overhead locker.

THE SEAT:
As I settled into my seat 9A, I was impressed by both the width of the seat and the legroom, as this is not classified as an Upfront or Extra Legroom seat by Jetstar I estimate the legroom to have been about 30 inches which is great for a low-cost airline and as a person of over 6ft I had plenty of room to stretch my legs, even with both of the seats next to me occupied. 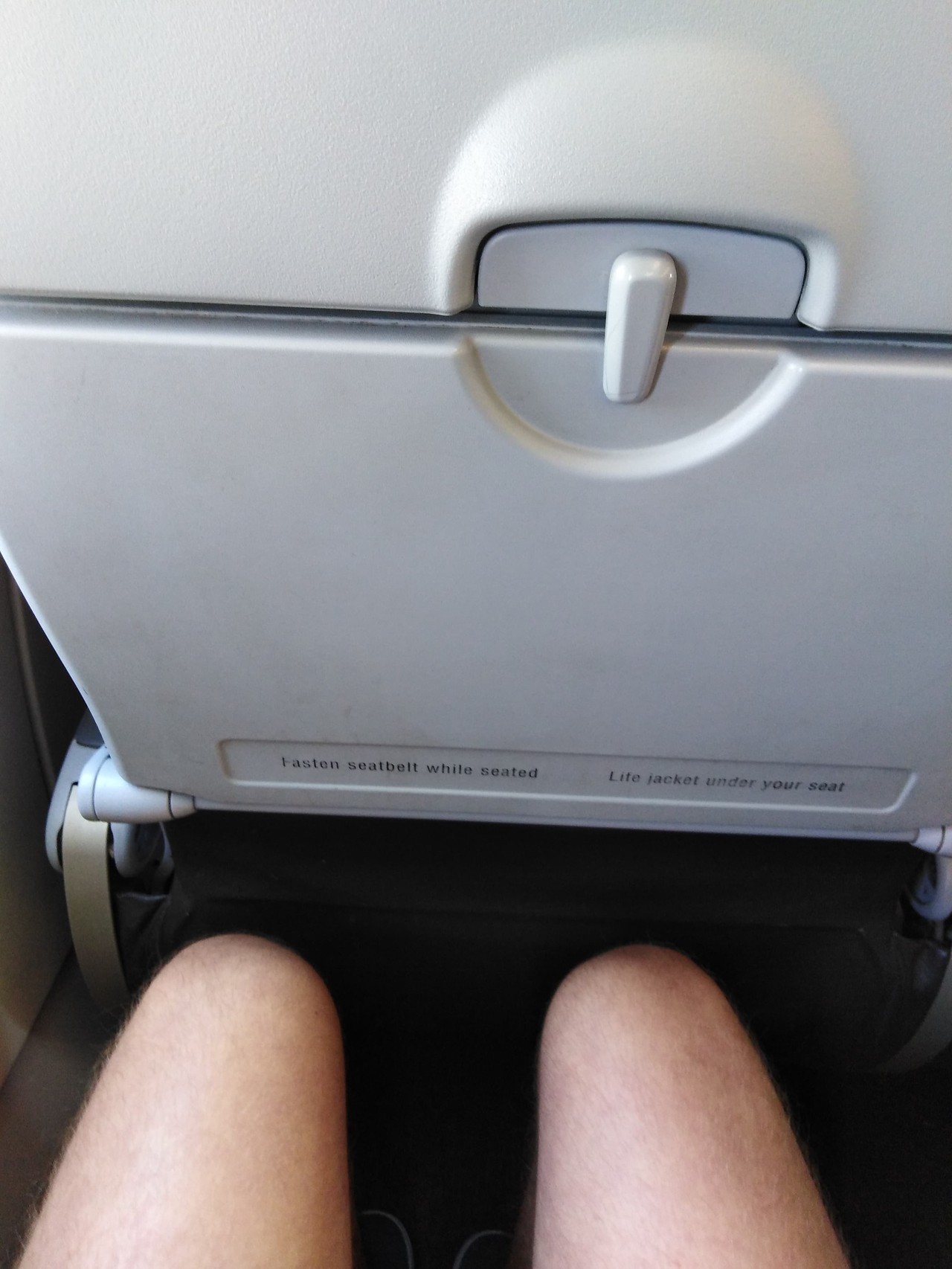 My only complaint about the seat was it was a little old, but Jetstar has since fixed this remedy by refurbishing the cabins of its whole A320/A321 fleet with new seats. The seat pocket contained the Jetstar In-Flight Magazine, A320 Safety Card, as well as a Sick Bag and the Jetstar buy-on-board menu, as shown here: 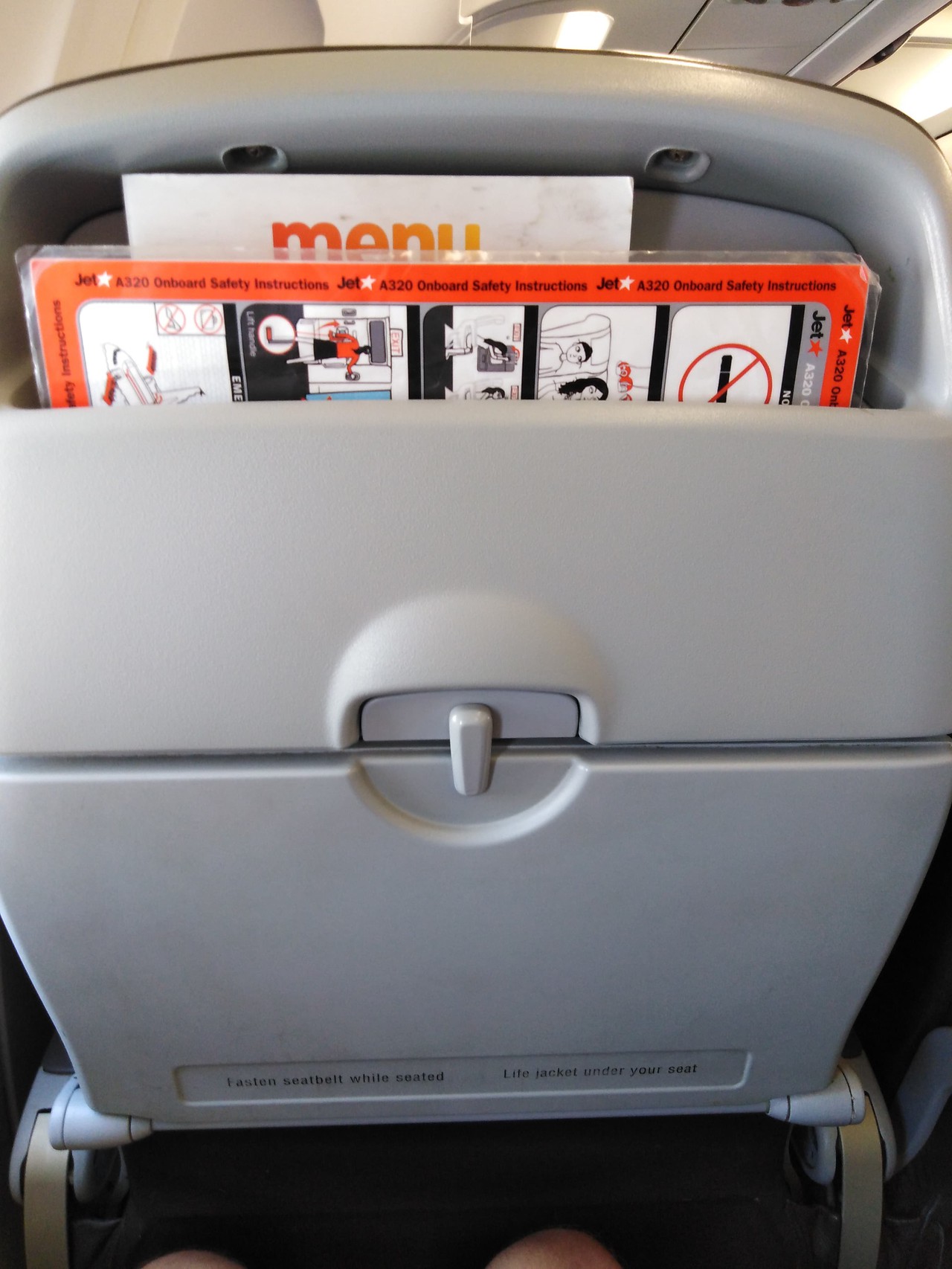 Beside us was another Jetstar A320, VH-VQR, preparing to depart to Adelaide:
An Alliance Fokker 100 and Tigerair A320 are also visible in the background. 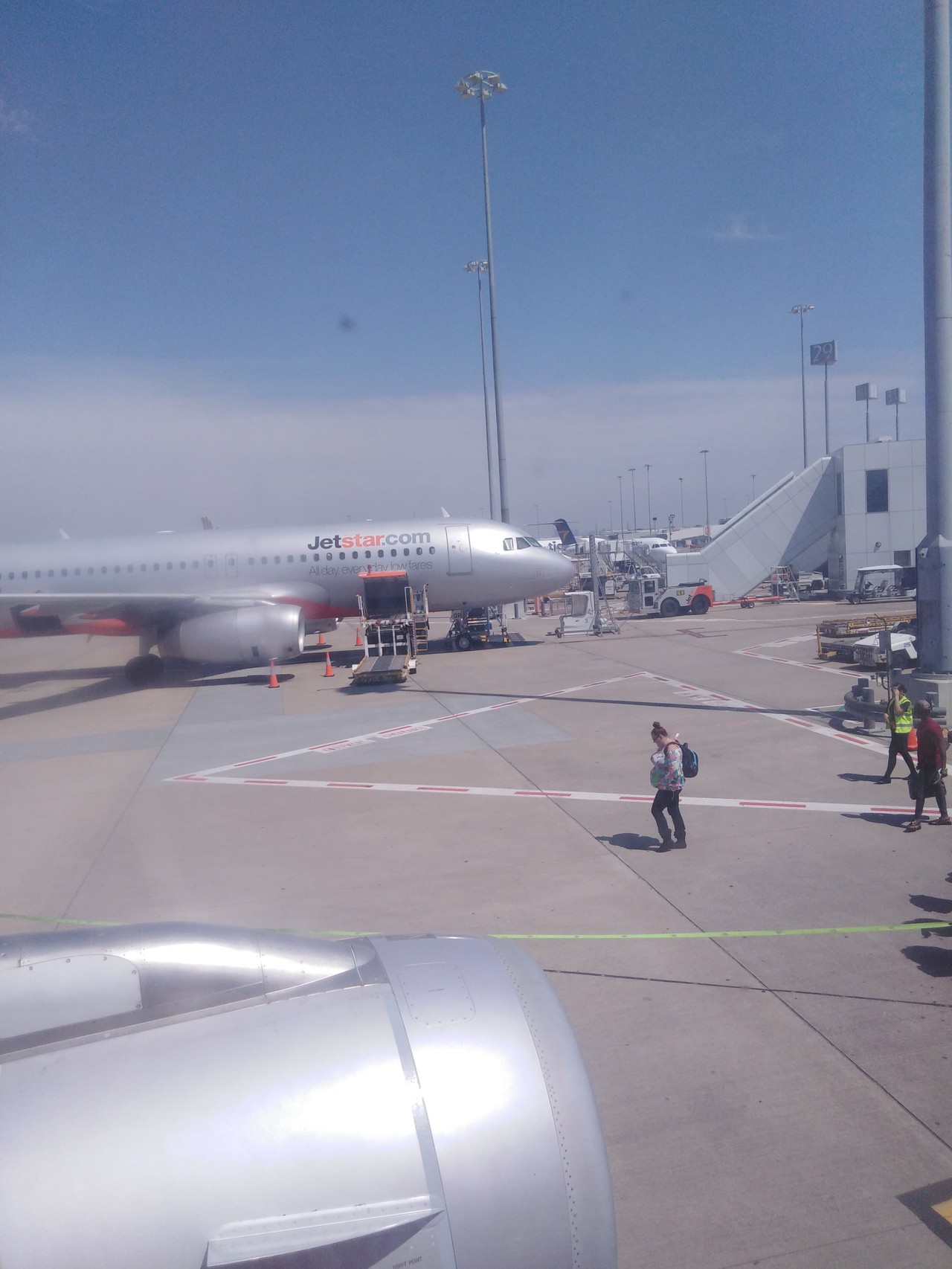 DEPARTURE:
After a short delay to due a minor technical issue with the aircraft which was excellently communicated to the passengers by the Captain, pushback begun with our aircraft being pushed to face tail to the North. Here is a shot of the aircraft beside us boarding during pushback: 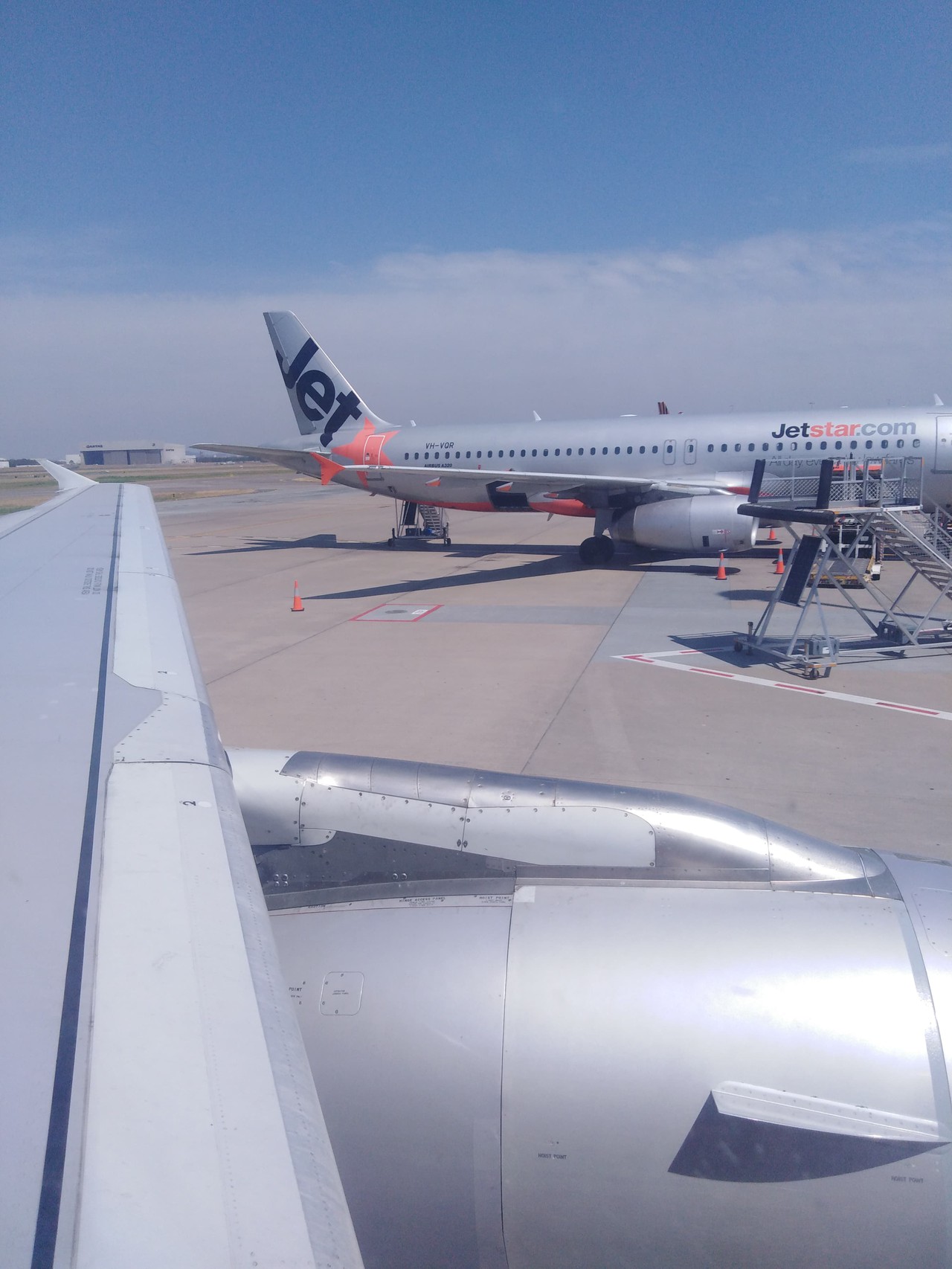 Soon after, both of the two IAE V2500 engines roared to life, followed by the Airbus A320's signature PTU barking dog sound. We then began our taxi, following a Tigerair A320, exiting the Brisbane Domestic Apron at Taxiway C3T and taxiing along Taxiway A before lining up on Runway 01R at Taxiway A7 behind a Air New Zealand B777-300ER departing for Auckland. Soon the engines spooled up and we roared down the runway, followed by a fairly swift rotation and very steep climb, which I was surprised about given the nearly full passenger load. The departure was more of less straight ahead with a slight left turn abeam the Brisbane landmark Hornibrook Bridge which crosses the Pine River Delta in Moreton Bay, before climbing to our cruising altitude of 36000ft.

It was a beautiful clear day with a few isolated thunderstorms in the distance, but otherwise an excellent day for flying, which meant great views like this one: 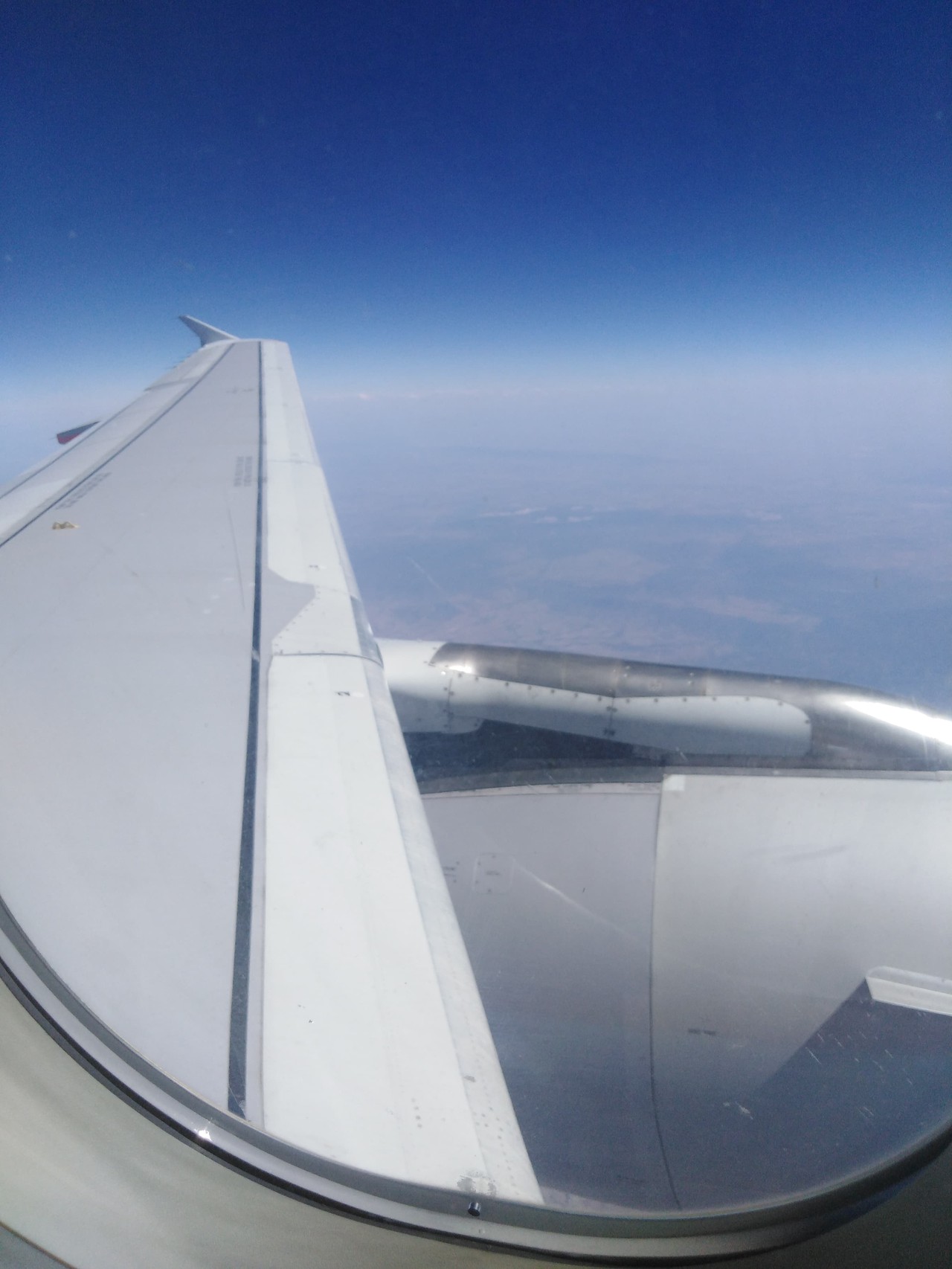 SERVICE:
The cabin service began shortly after we reached cruising altitude, about half an hour into the flight, beginning with the cabin crew distributing pre-ordered snacks and drinks to customers. I pre-ordered a chocolate chip muffin and a large coffee through Jetstar's website at the time I booked my flight for a price of $7, which I found to be very reasonable as the muffin was served warm and coffee hot. I was also very impressed by the friendliness and professionalism of the four flight attendants working the flight to Townsville who were more than happy  to ask the captain if I could visit the flight deck once we landed in Townsville, I was welcomed by the captain and first officer once we arrived. Once the pre-ordered snacks and drinks were distributed, the cabin crew then proceeded with the usual trolley service, offering buy-on-board items to passengers.
I added some photos of my muffin and finished coffee (oops) below: 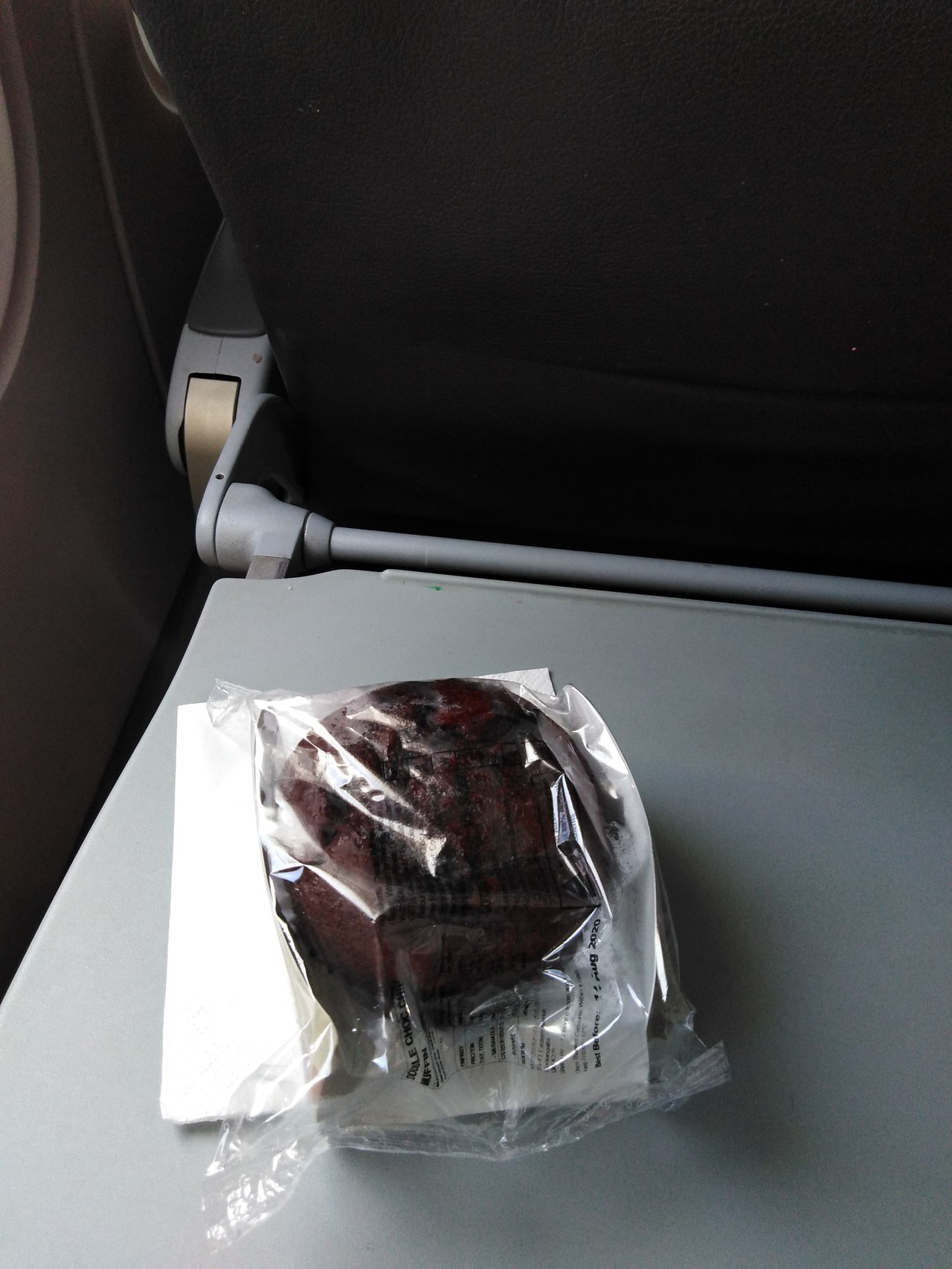 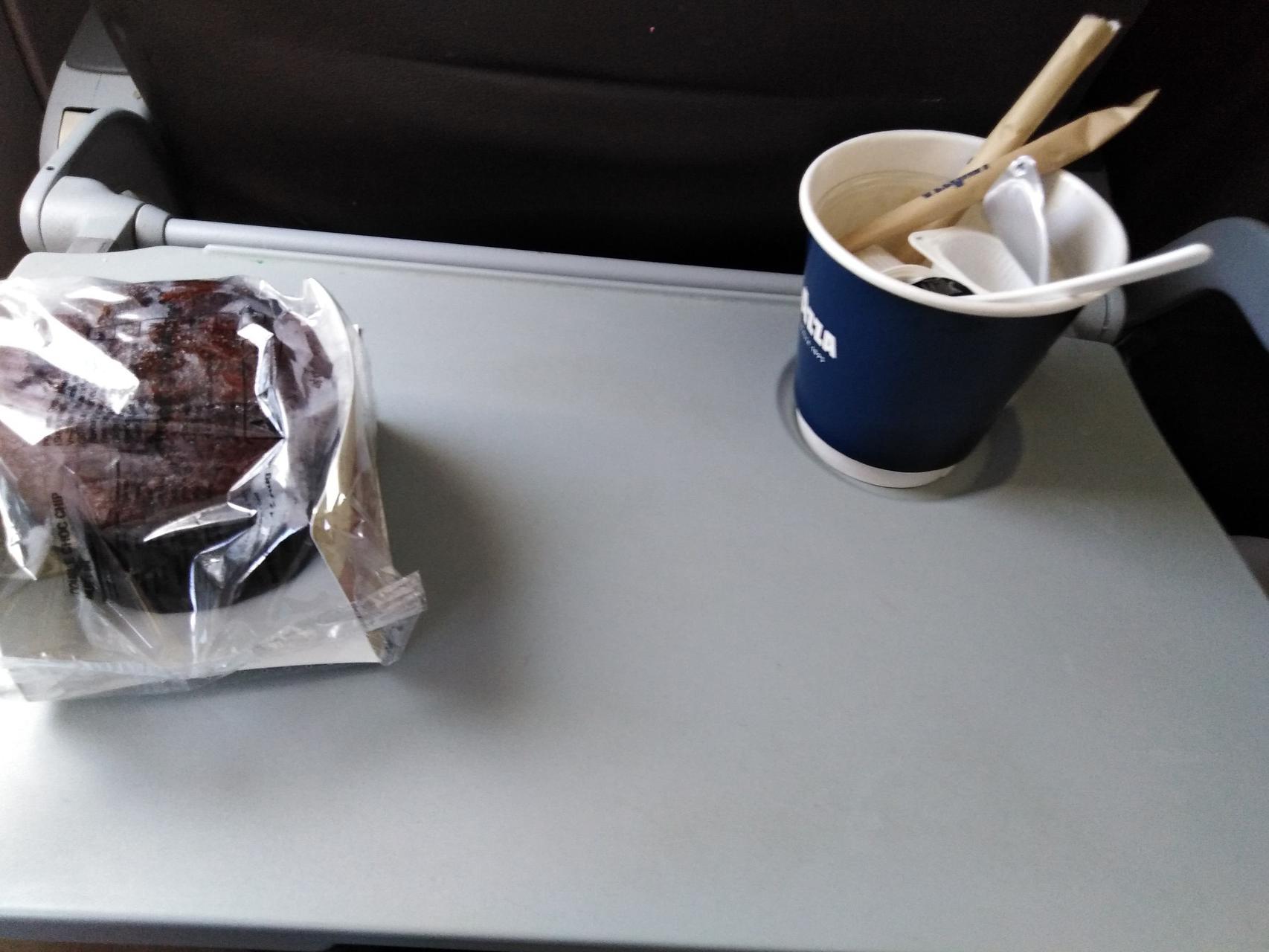 The cabin service was followed by a rubbish collection, as well as the cabin crew walking down the aisle with the Starkids Foundation donation tin, a signature part of every Jetstar flight, as Jetstar partners with World Vision to donate money to better children's lives in Australia and abroad. For the remainder of the flight I gazed at the beauty out my window and perused the Jetstar in-flight magazine which had some interesting content. 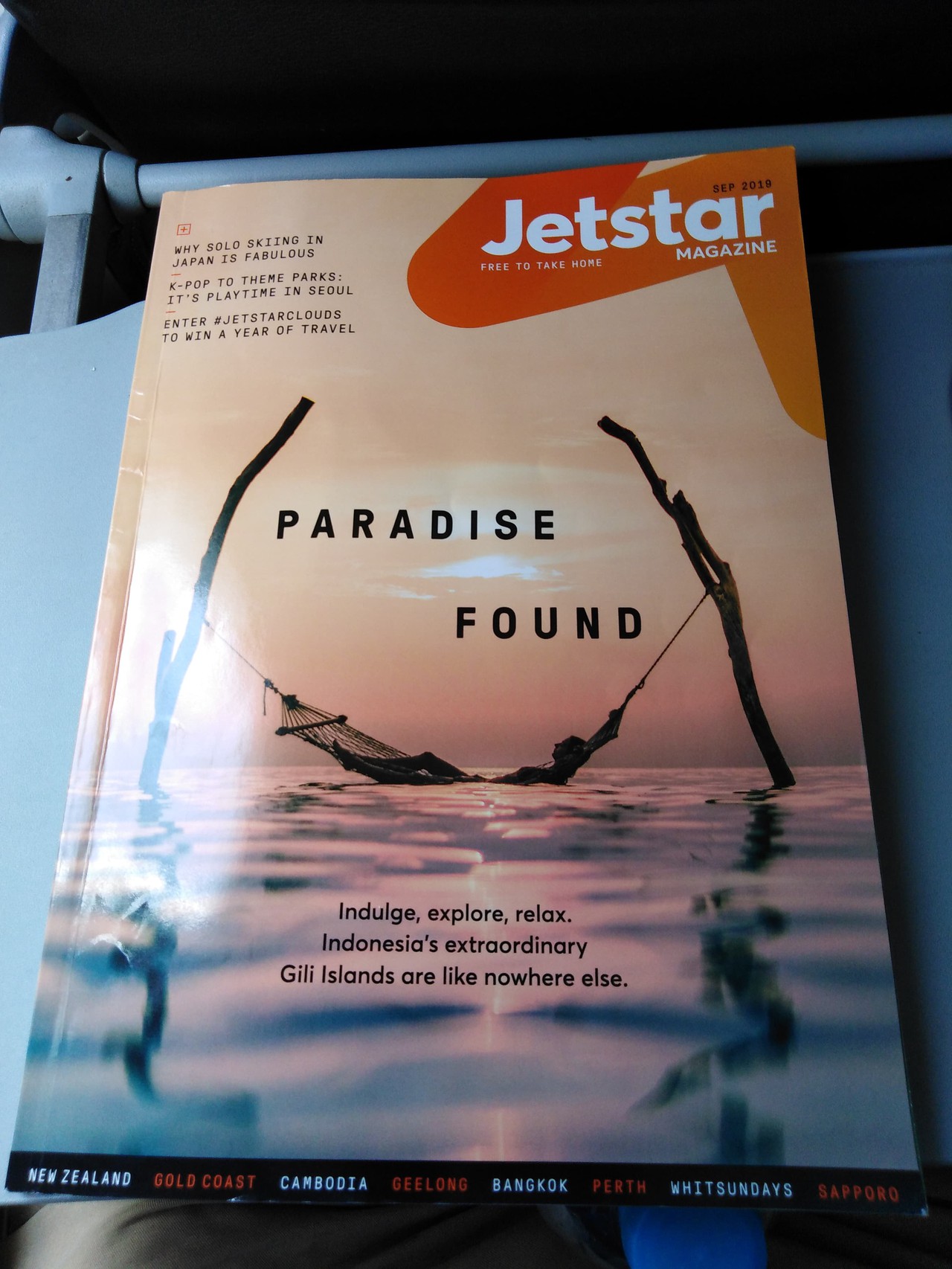 We briefly left the Queensland coastline north of Mackay, over the beautiful Great Barrier Reef, take a look at the colour of that water: 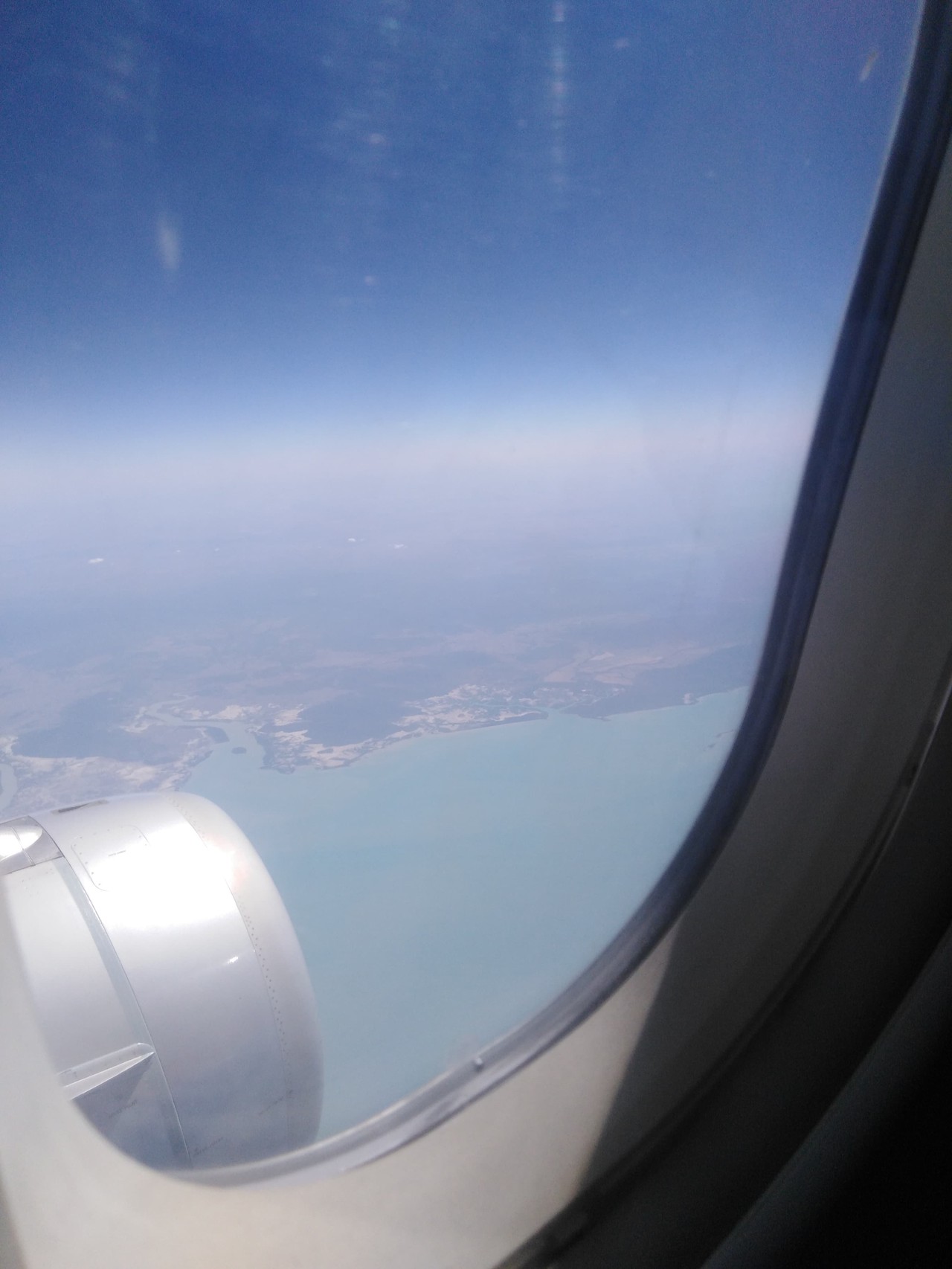 ARRIVAL: We soon weaved our through the surprisingly high mountains around Townsville as we descended on the RNAV-Z approach into the airport, hitting a bit of moderate turbulence along the way. The views were so spectacular I forgot to take pictures. We then crossed over Townsville's Southern suburbs with a great view of the Queensland Nickel refinery before touching down on Townsville's runway 01 very gently, a credit to the excellent pilots that day. As we taxied to the sole terminal at Townsville I was quickly reminded that the airport was an active Royal Australian Air Force base by the scream of F-18F Super Hornet's conducting touch-and-go training on the runway. 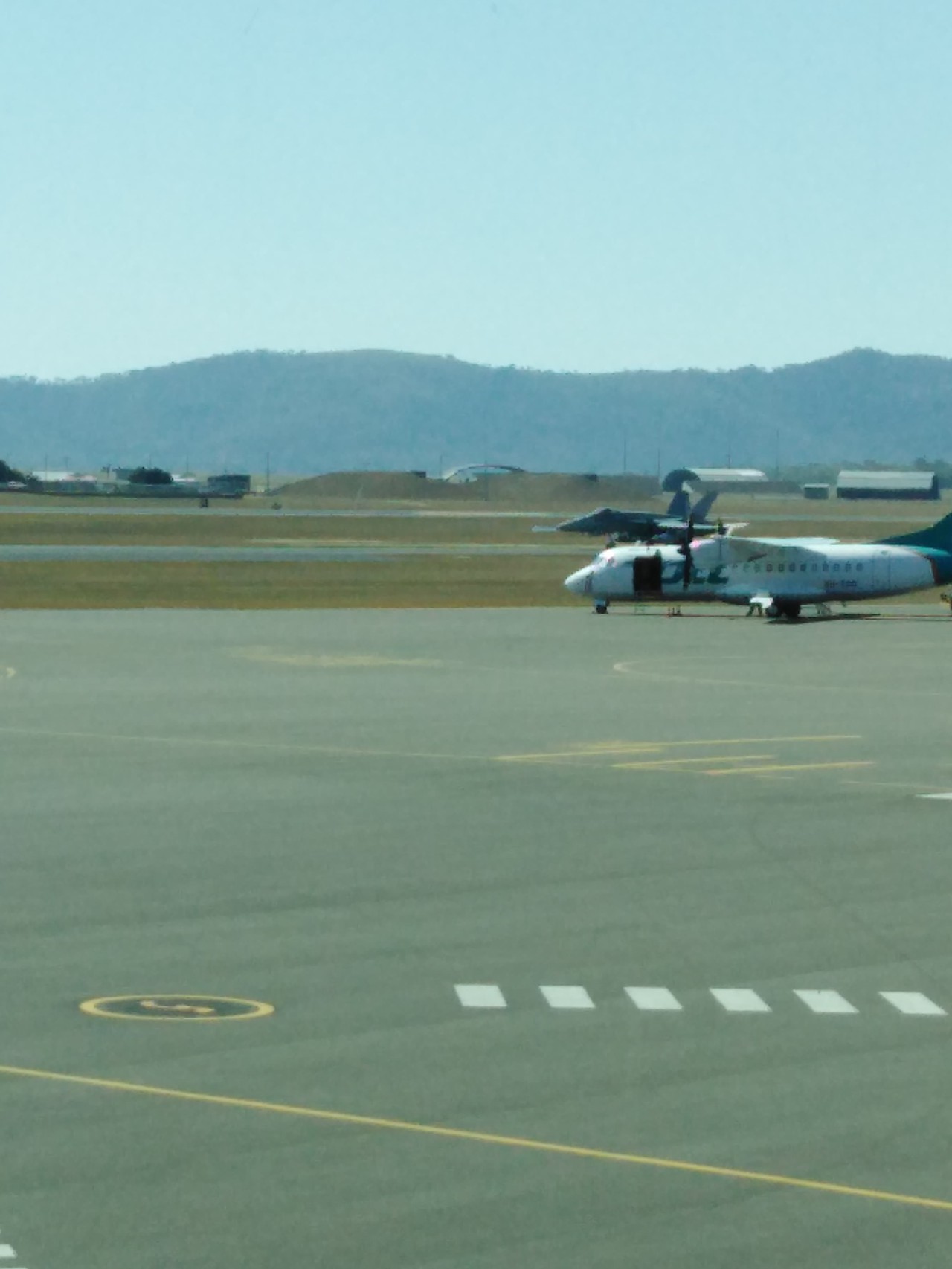 We then taxiing past, a Toll ATR 42-300, as well as a number of Hinterland Aviation Cessna Caravan's before arriving into Gate 4 at the terminal. Where deboarding occurred swiftly, as this aircraft had only a 30 minute turnaround time on the ground before departing back to Brisbane Airport again. I thanked the cabin crew for their wonderful service, met the enthusiastic pilots who gave me lots of good tips on becoming a pilot and then deboarded. 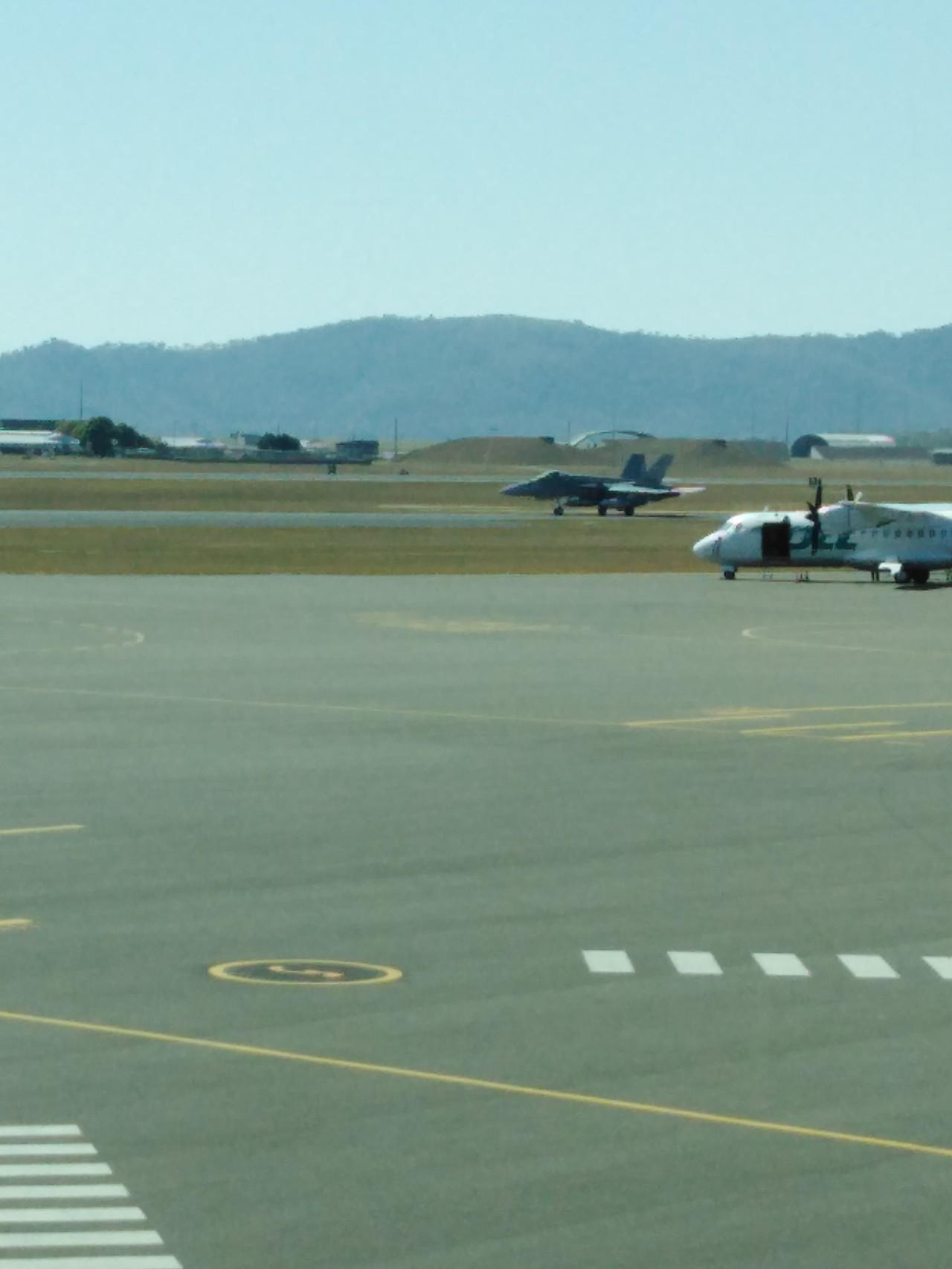 Here is one last look outside before exiting the aircraft, ending my wonderful experience with Jetstar: 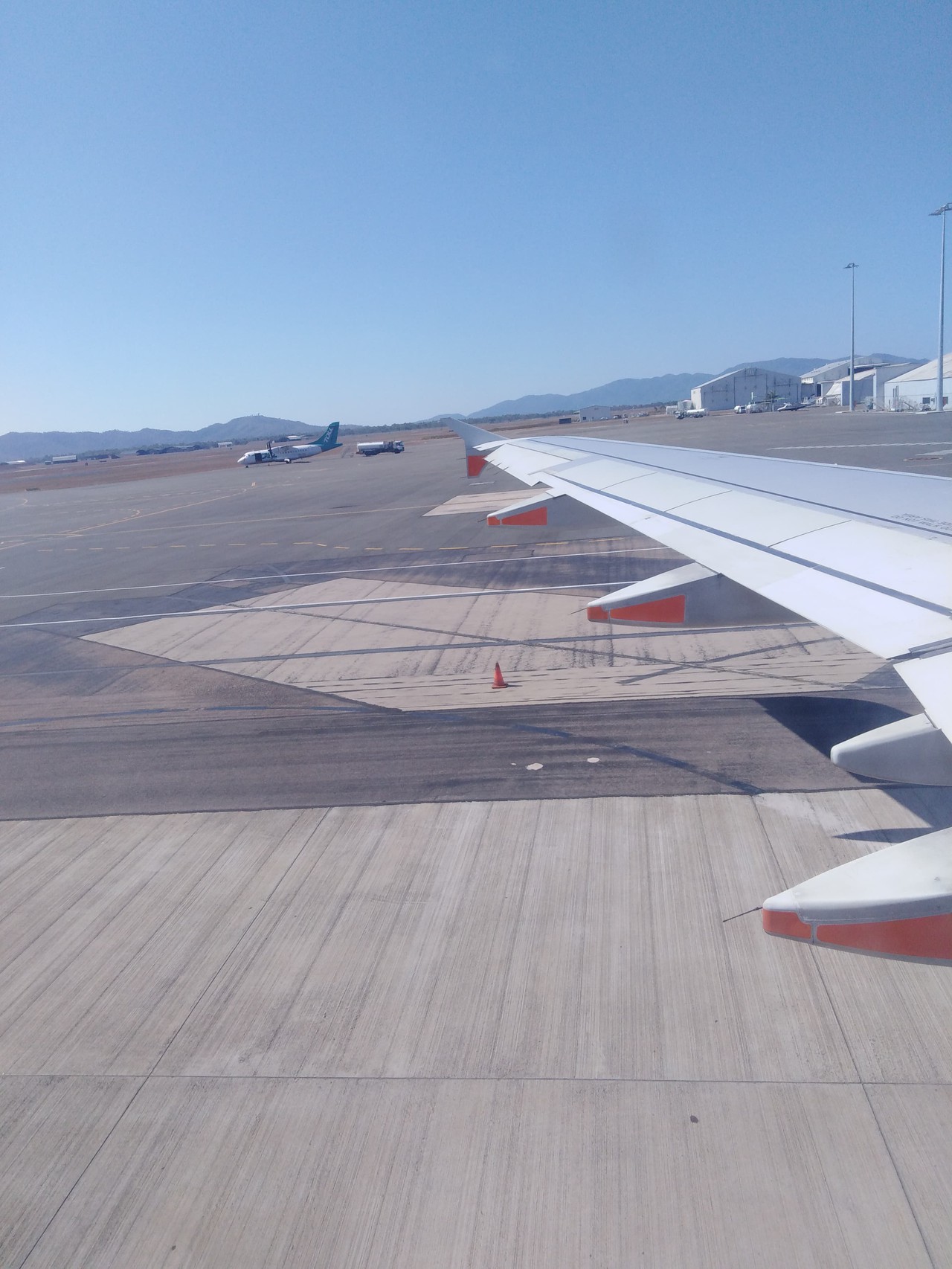 CONCLUSION: I had an excellent flight with Jetstar. All the Jetstar staff members I dealt with on this flight were extremely friendly and professional (especially the Cabin Crew). The seat was also very comfortable with excellent legroom for a low-cost carrier, as well as a reasonably priced buy on board menu. The only complaint I have is the lack of any in-flight wifi or stream-to-device entertainment system, although I here Jetstar is planning on introducing a Entertainment App for all domestic flights (including a In-flight map) in the next two months. It was also great to be reunited with my favourite narrowbody aircraft, the Airbus A320 Well done Jetstar! Thank you for reading my trip report! Please consider following me on Instagram: toms_aviation OR Following me on Facebook: Tom's Aviation Please also consider subscribing to my YouTube channel Toms Aviation where I will post several videos from an upcoming Thailand trip in the next fortnight!

US Airways flight in Business

He wrote 3 reviews about 3 airlines and 3 airports.