By marathon GOLD 2605
Published on 23rd September 2013
This series of FR was part of my vacation in February that year:

This is not a FR on Flight AE389, but I did buy a seat on that flight one month earlier.

But when I reached TSA on that 14th of February, Flight AZ391 had been replaced by Flight AE389, which was ten minutes later. No big deal.

There are few people checking on these two flights which were not full: KNH and TTT are not your favorite Valentine destination. 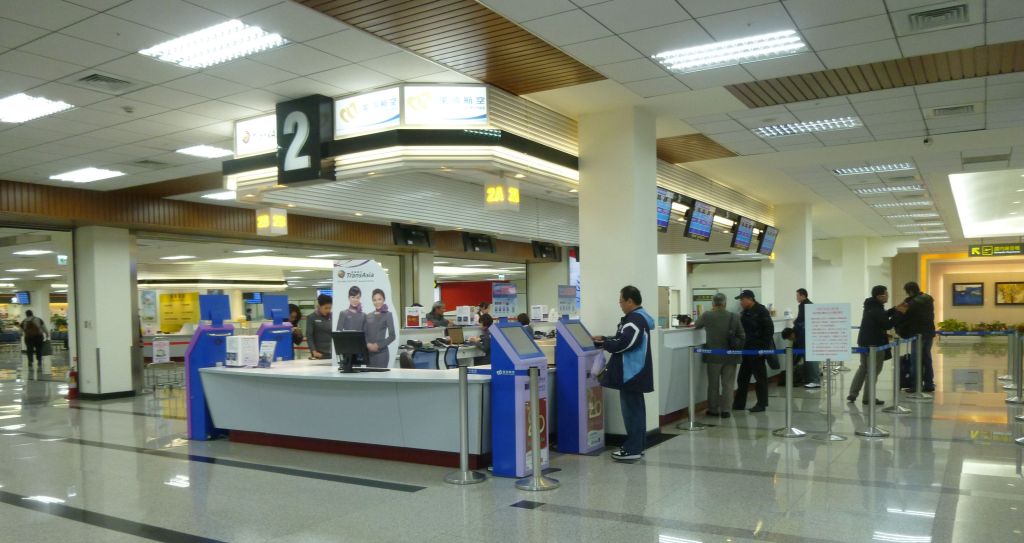 And since the flight was only two thirds full, I had no problem getting a window seat on the right.

This time, since I was leaving for about ten days, I had to check in a luggage, at this counter where the staff was not overworked, as you can see, no matter which airline.

The weather was badly overcast in Taipei that day, so I suggest going back in time one week and taking some altitude in town for some pre-flight plane-spotting.
Lots of height, some 390m above ground level, on top of what was then the tallest building in the Far East, i.e. the Taipei 101 Tower. From the observation platform, when the weather is right, you have a fair view on TSA, which lies alongside the Keelung River. 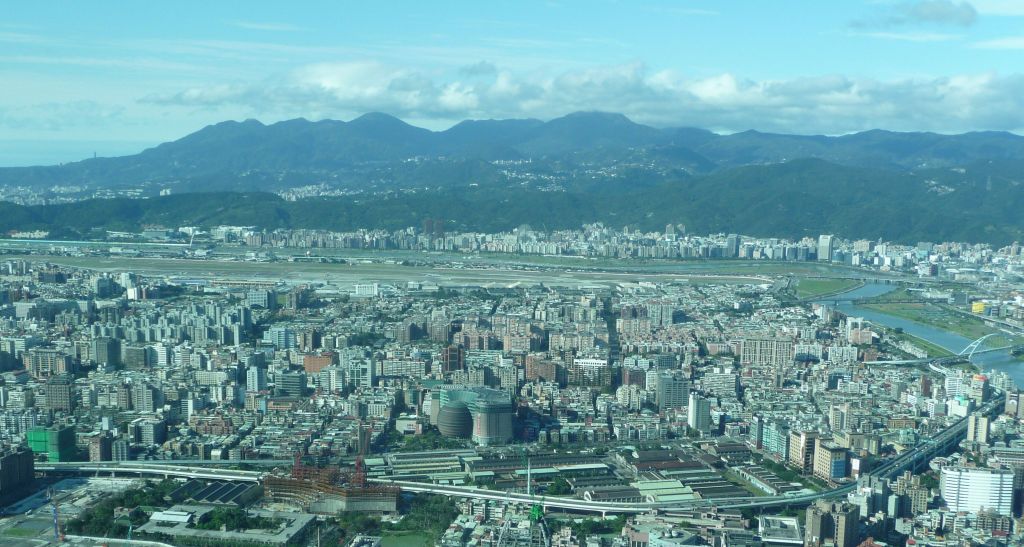 Of course, you would need a better telelens than mine to take pictures of the traffic from there, only because I know the traffic do I know that this one is an NH 767 NH, 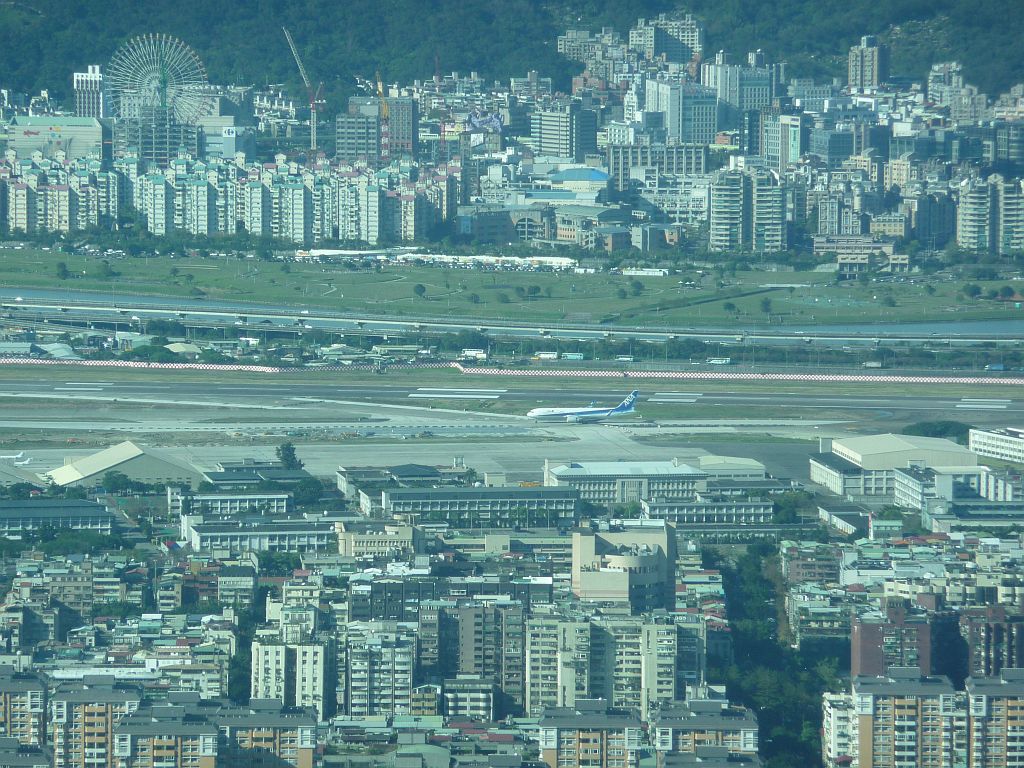 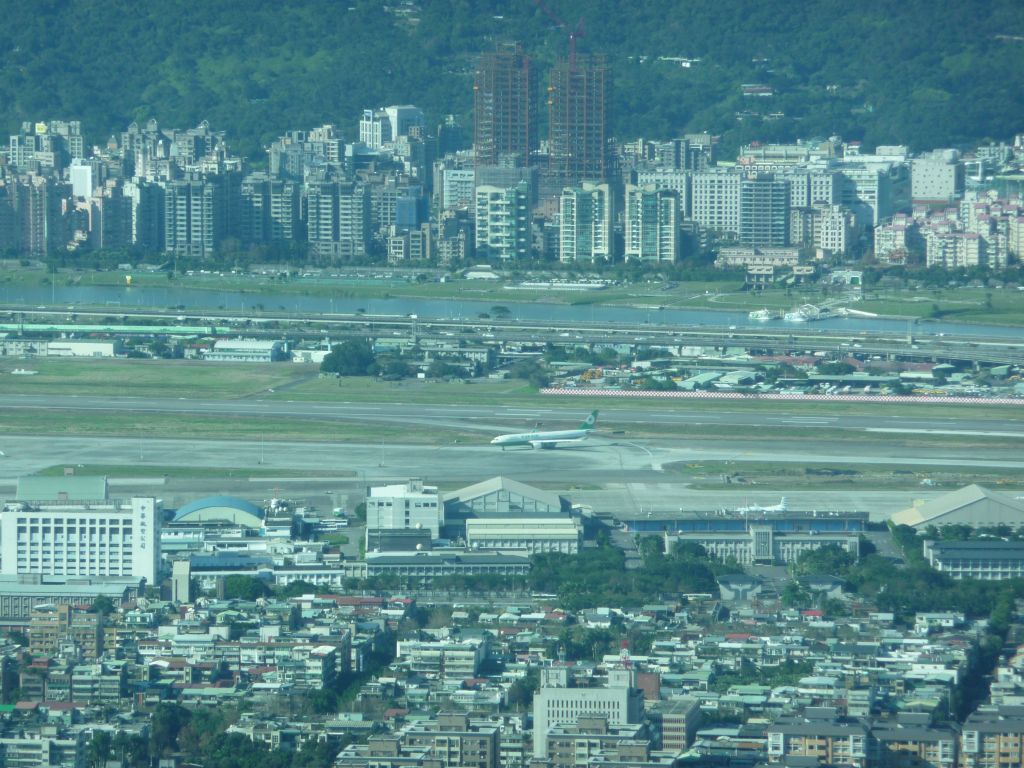 Let's go back on earth, in TSA, where this Transasia Airways flight is boarding close enough to the terminal not to bother with a PAXbus.

On the right, this is my E-190, which has an airbridge. Its registration number is B-16823, according to the number 23 on the front landing gear's hatch . 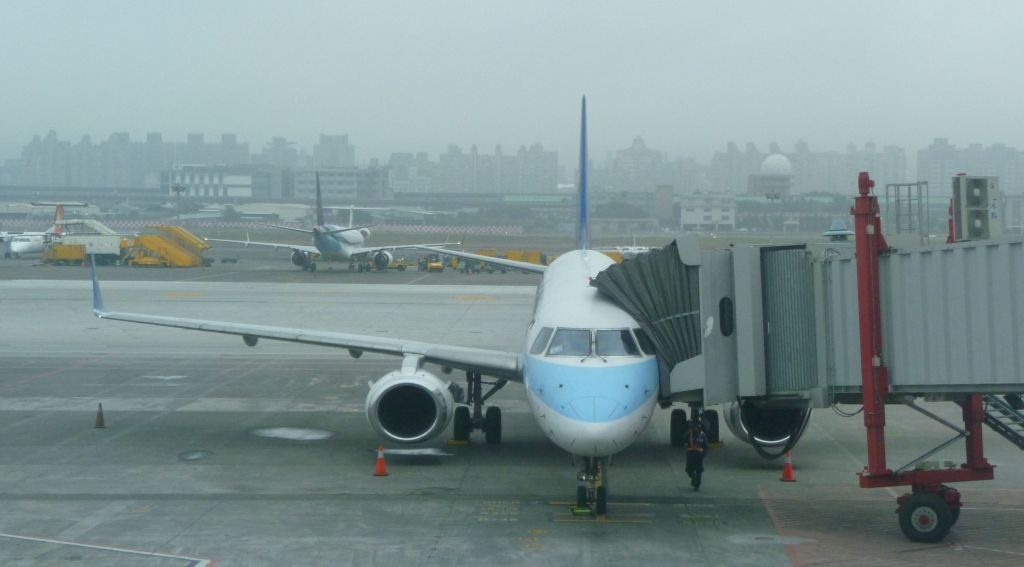 GE's ATR-72 is ready for pushback.

Meanwhile, a BR A330 taxies to the runway.

In the background, two FarEastern Air Transport MD-83's, in storage since the reactors of one on the left are missing and those of the one on the right have their protections on.

The safety card and a sample of derivatives sold by Mandarin Airlines. 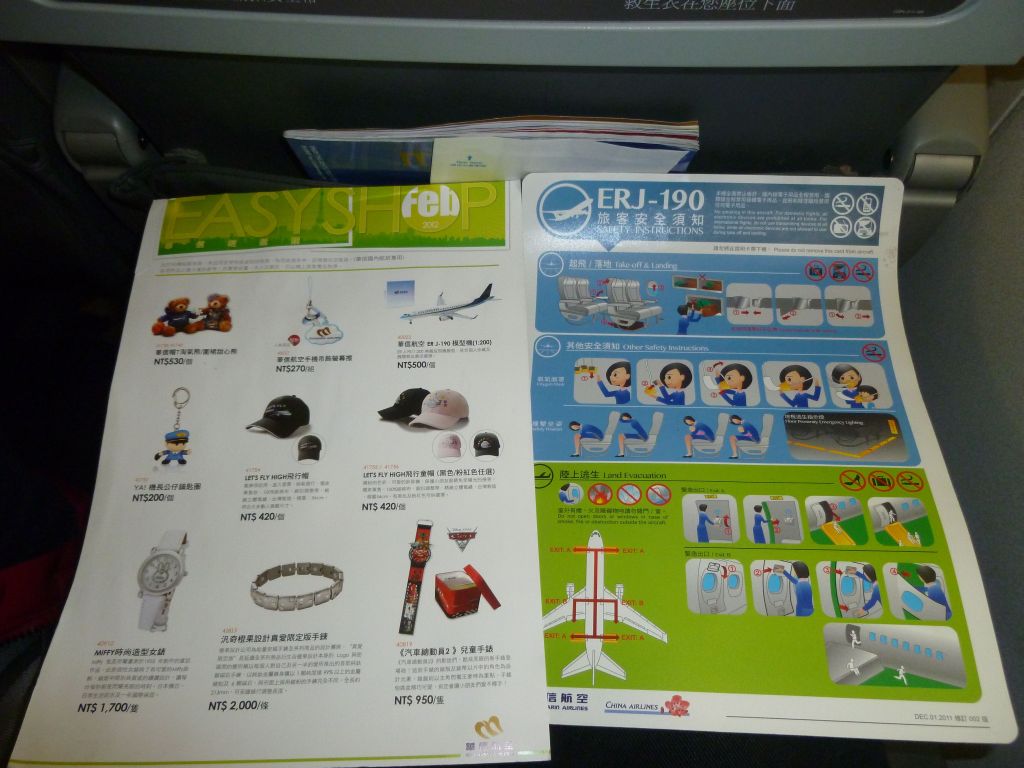 A view of the cabin of the E-190. There is no IFE, and the safety demonstrations are done the old way, in Mandarin Chinese only. 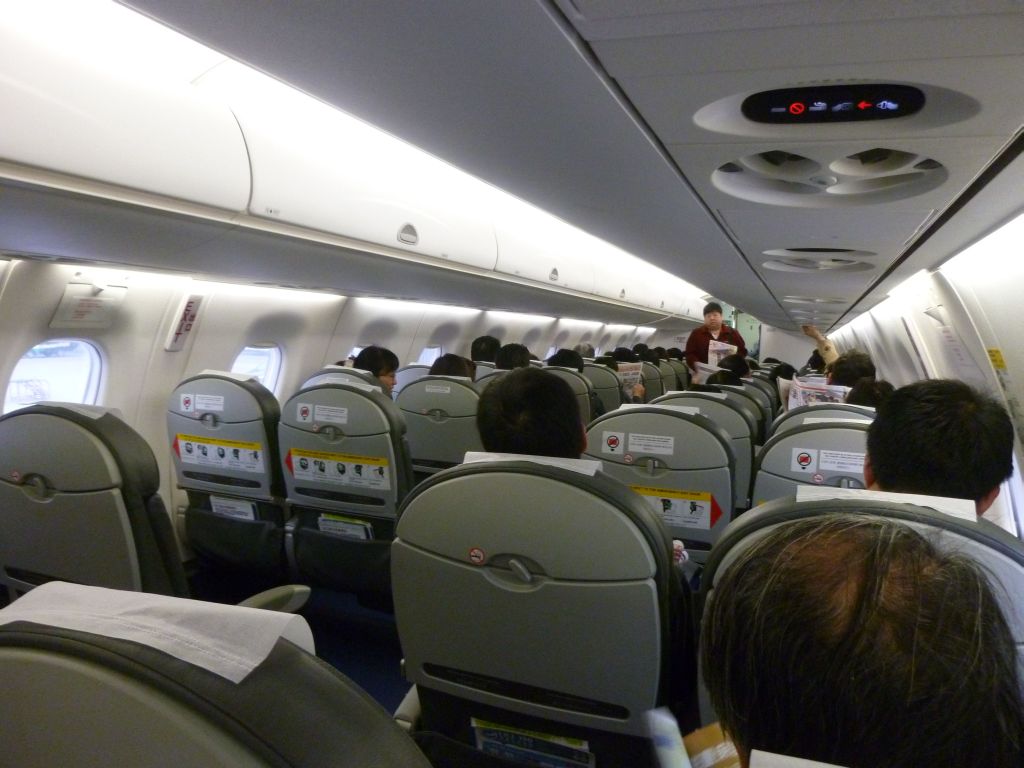 Mandarin Airlines belongs to the airlines which think that not having a row 13 helps the comfort and safety of its passengers. 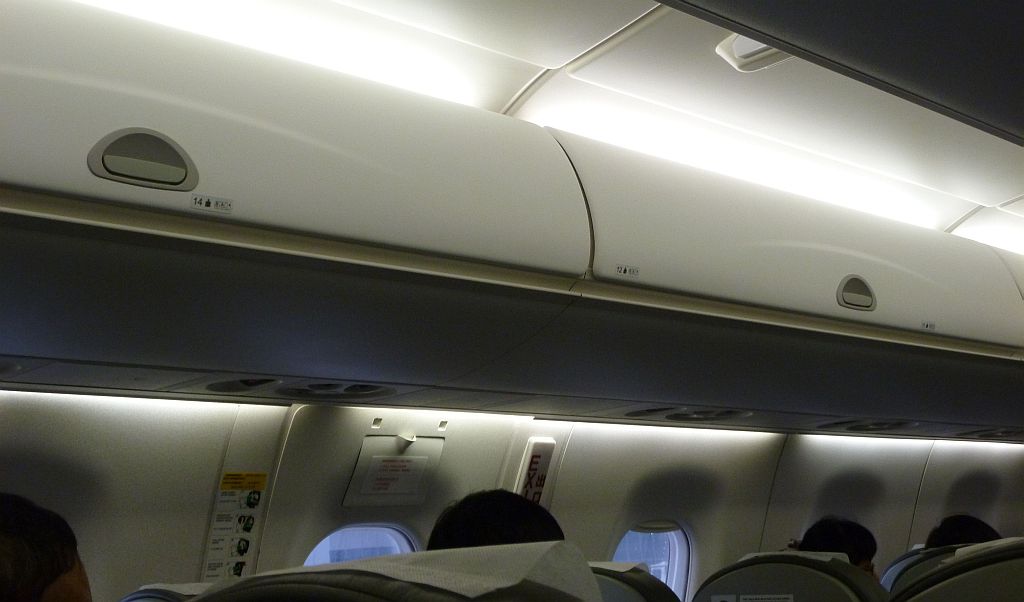 The catering is as usual limited to (bad) coffee, or oolong tea or water, and nothing to eat. This is not what I chose to take picture of, but the landscape. Flying to Taitung when you have a window seat on the right means following the east side of Taiwan's main mountains, which you discover here with me from 6,000 feet above sea level, with the de rigueur winglet. 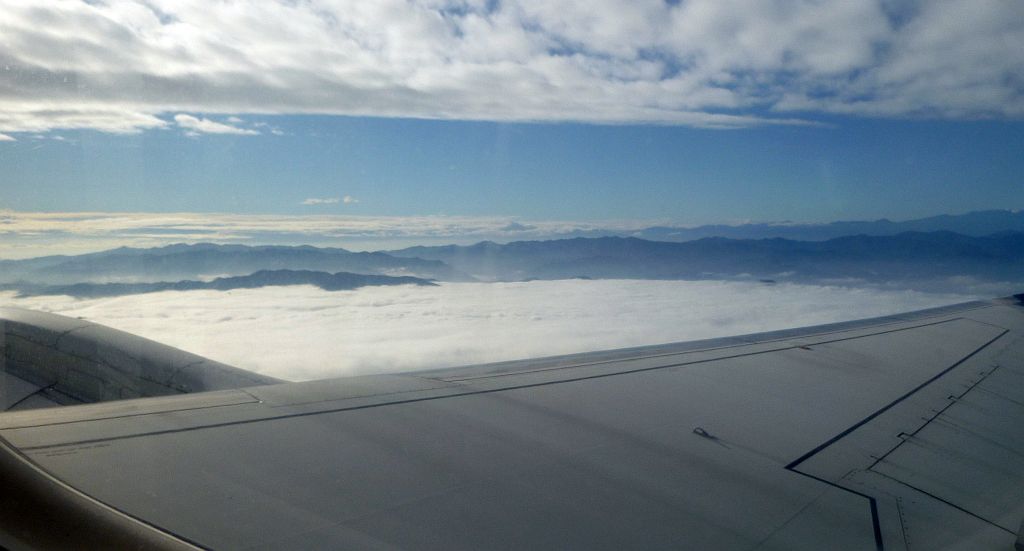 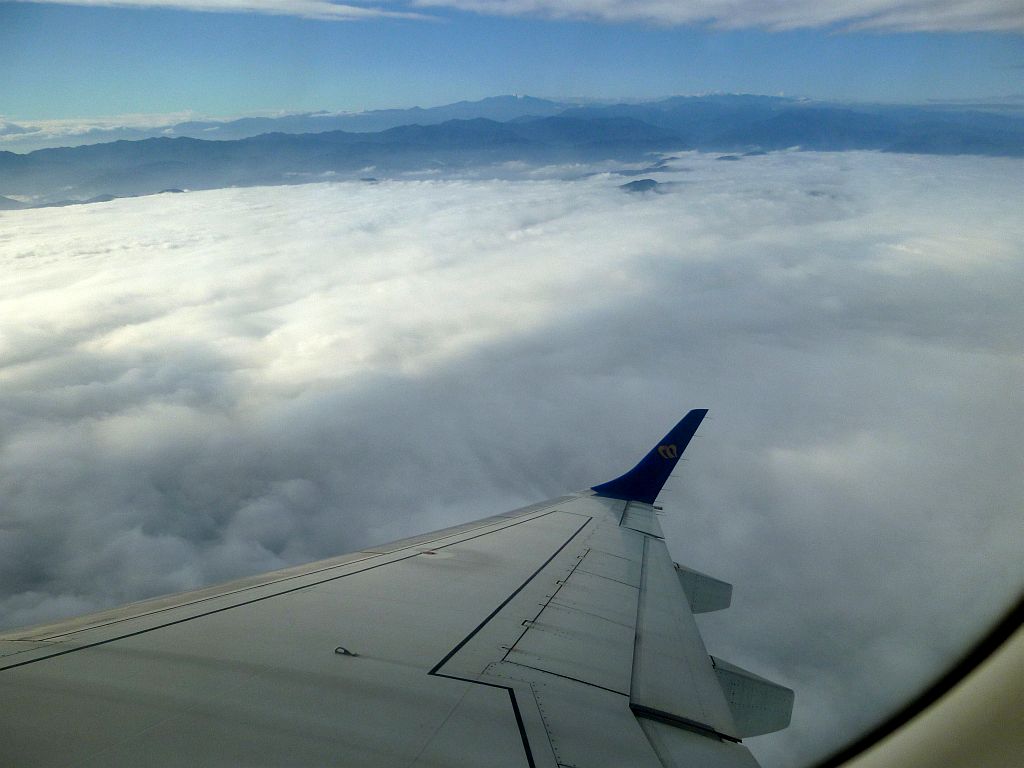 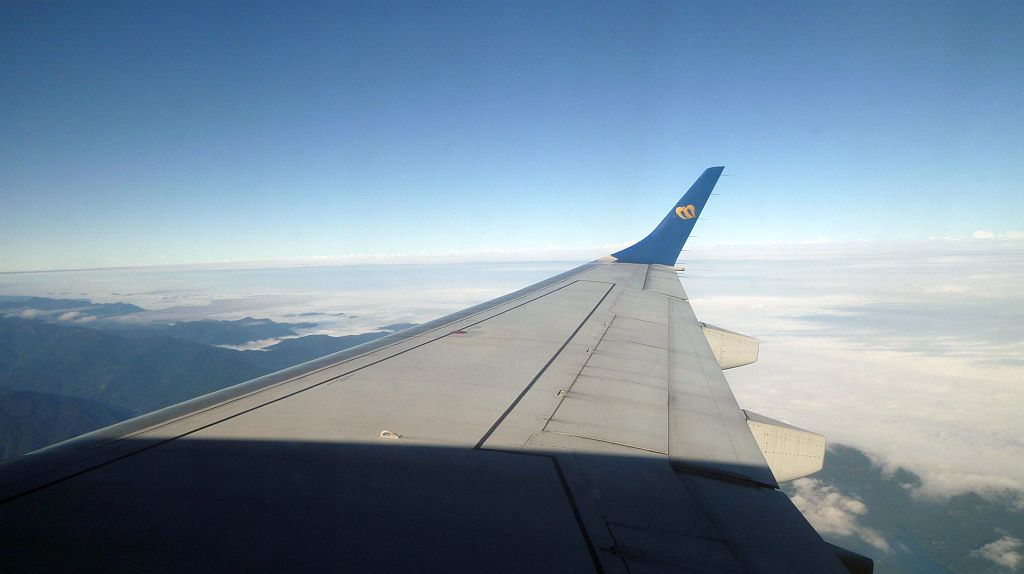 A winter FR above mountains which are well above the 3,000 meter mark should have snowy landscapes. South of the Tropic of Cancer, this is not an easy requirement, but I did find some snow here on 3,742m high Mount Nanhu. 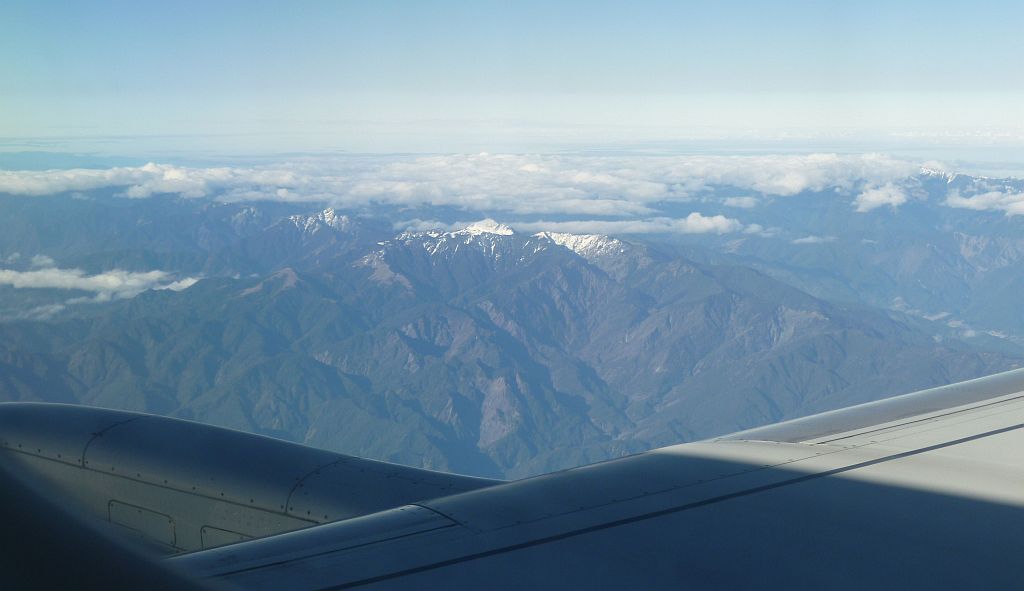 Approaching TTT, we dive into the cloud blanket, which blankets the ground until close to the ground, because the weather is even worse there than where we departed from.

On the right, this is not TTT, but Fengnin Air Base.

The plane will land on Runway 04, and turn around above the ocean and line up toward the north-east. 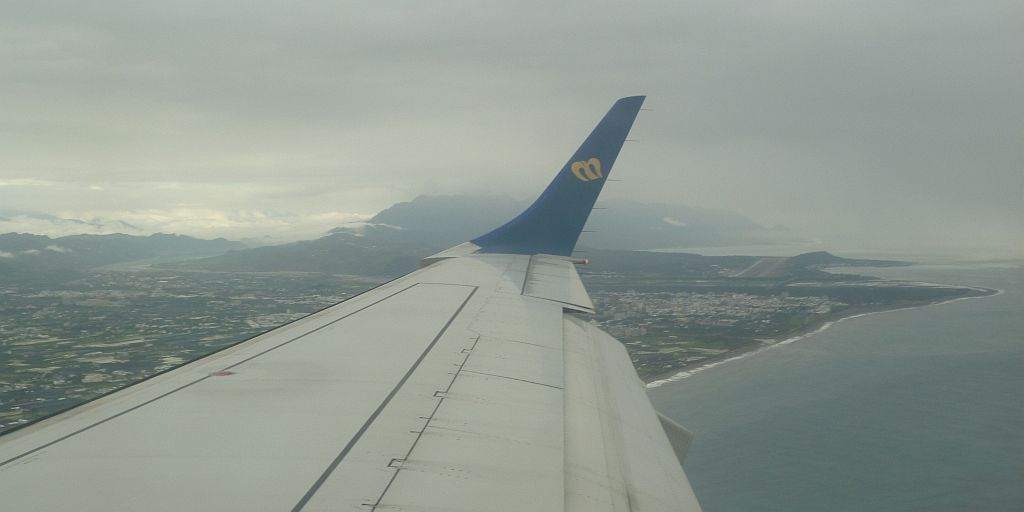 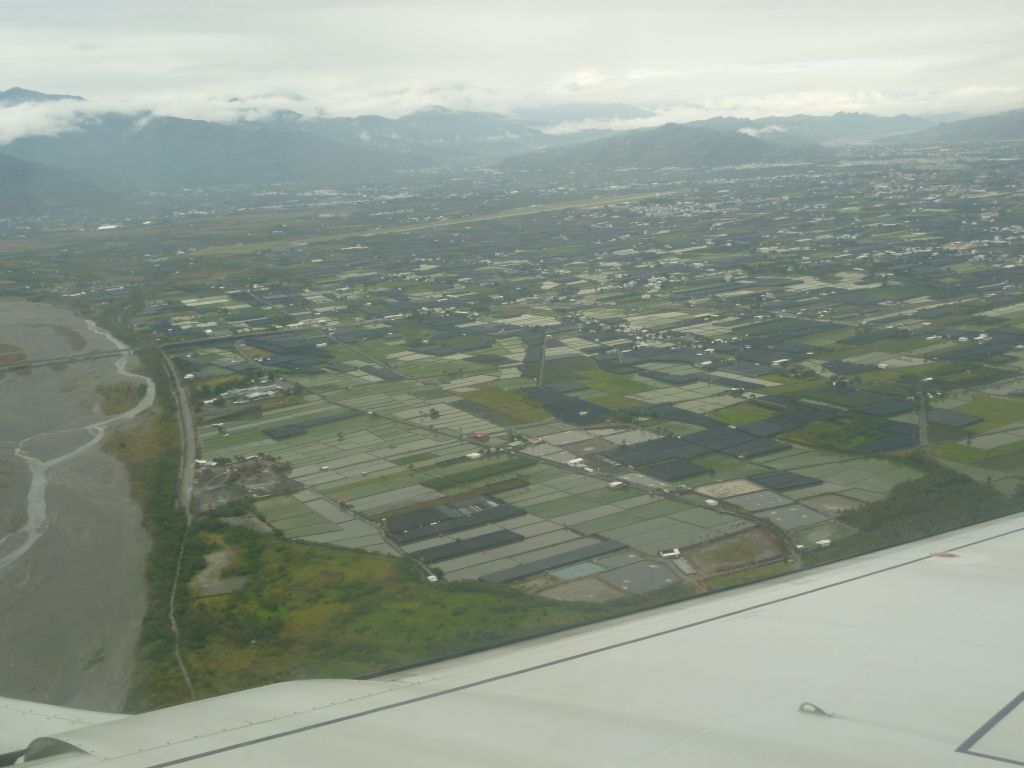 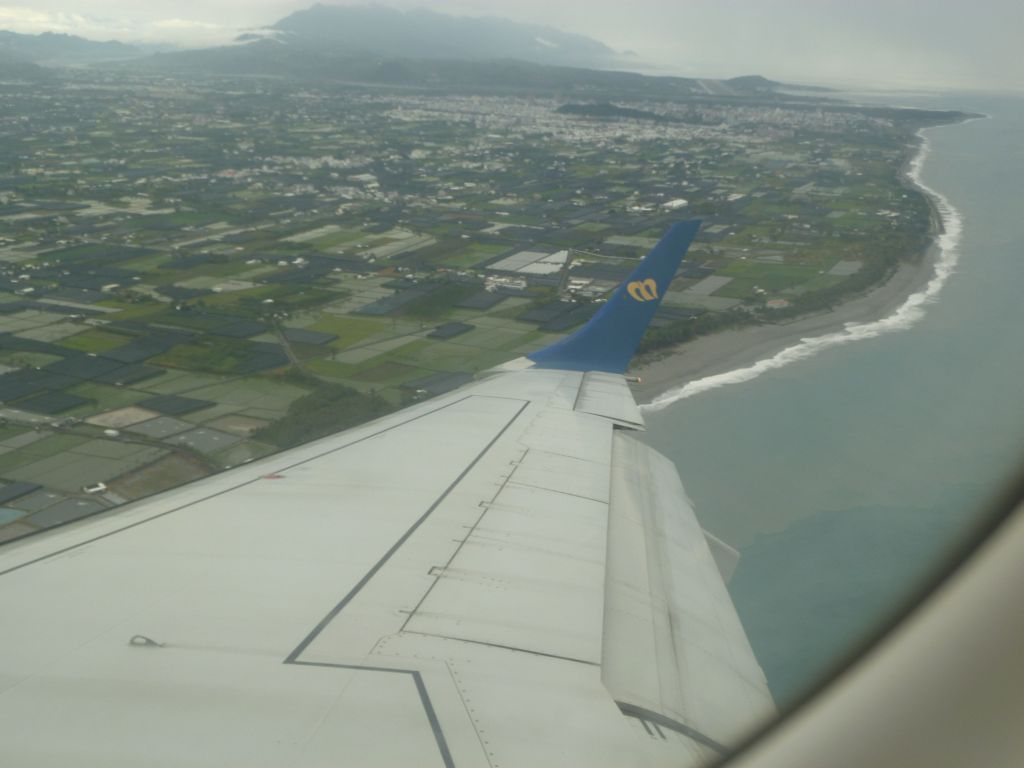 TTT Runway 04 in sight towards the left on this picture. 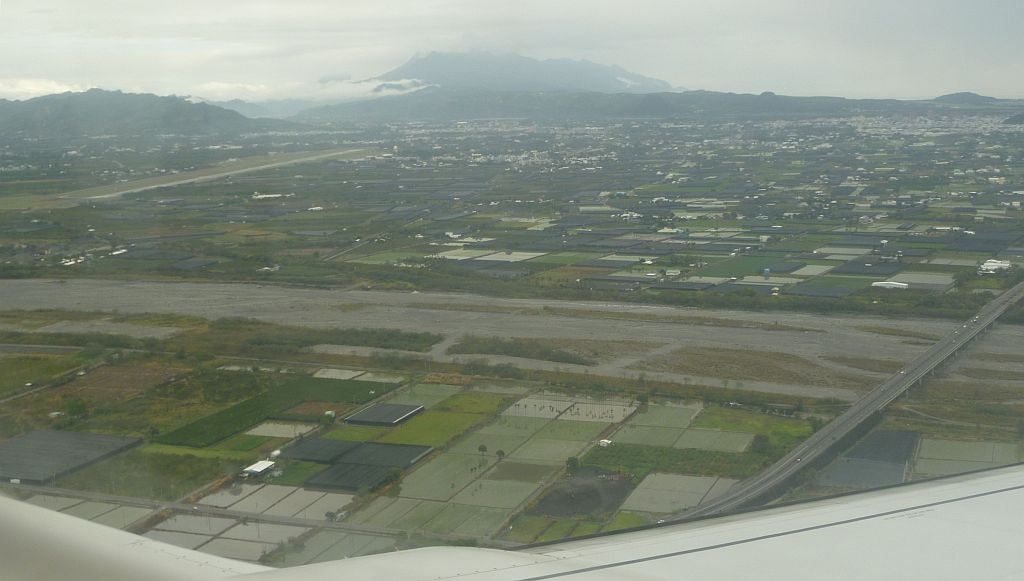 Arrival in TTT, where a Uni Air MD-90 is already there.

No cheating: could you identify this aircraft, or its operator?

The registration number of course makes it easy…

This is one of the Dornier 228 operated by Daily Air, a tiny local Taiwanese airline.

Anyway, the E-190 reached its parking space, and the Keep seatbelts fastened sign remains lit for at least five minutes after it reached a complete stop. During that time, nobody made a move to stand up: the Taiwanese are di-sci-pli-ned.

A last view on the E-190, through the blue windows of the terminal. 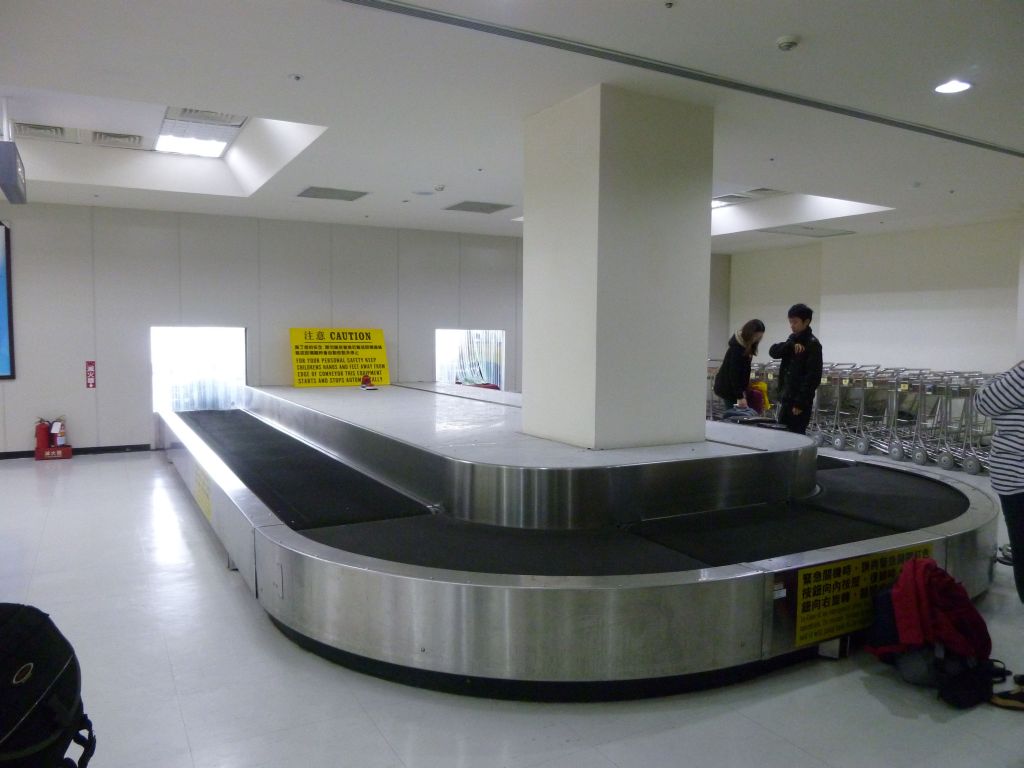 TTT's terminal and control tower, from the outside.

I should have a taken a picture of the car rental agency down the road – it looked more like the shack of roadside vegetable seller. The car rental agencies in Taitung have the reputation of refusing international driver's licenses (which are valid in Taiwan), and I had to deploy the full scale of my negotiating skills in Chinese to have the manager accept mine. And despite the Visa and Amex stickers on her door, she took cash only. Taitung is not for the ordinary foreign tourist.

Actually, the administrators of FR did not even know that this airport existed. They thought they had included all the Taiwanese airports in the data base, and I was waiting for this flight to tease them.

Why go to Taitung? For instance to reach the best paraglide base in Taiwan, but it was too early in the season to have adequate lift.

Personally, I prefer the hot springs, like this one where you can have a foot bath, while eggs boil in the 95°C water of the first basin. 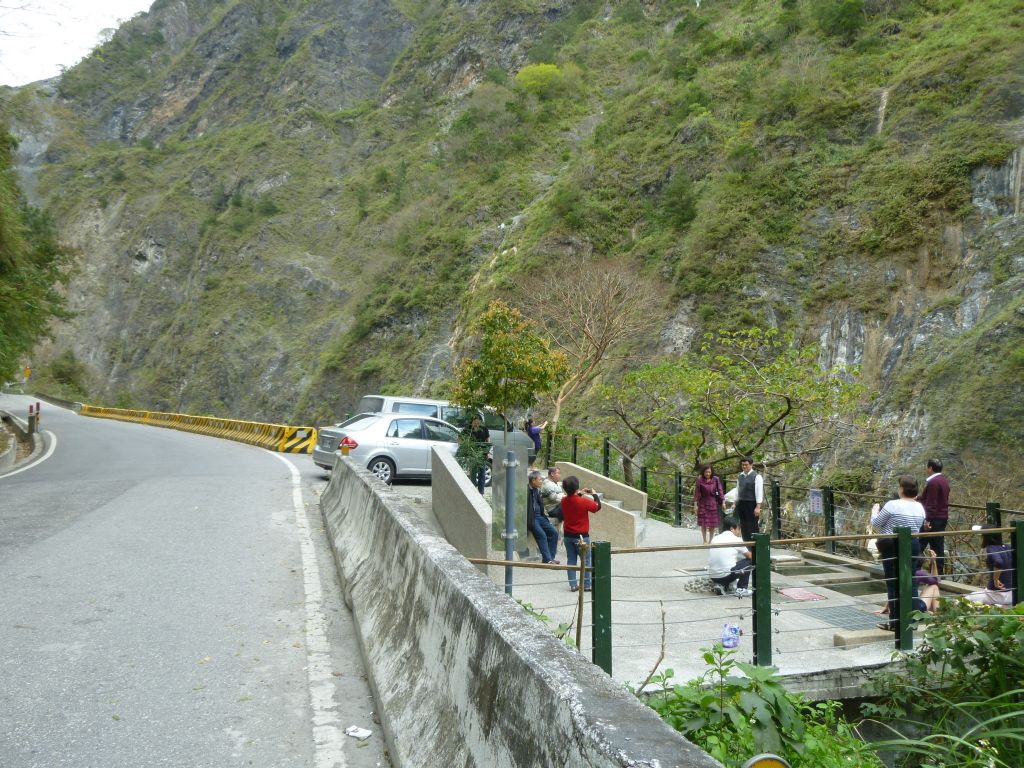 .. or this village on a an elevated platform one thousand meters above sea level in the mountain.

To find them, you only need to go to a tourist office, like this one, in the middle of nowhere, but with extremely friendly staff. Note by the way that even though the ceiling was just above ground level when we landed, we had a bright sunny sky at noon, mandating the use of the car's air conditioning, and pouring rain in mid afternoon. The weather is especially unstable on the east coast of Taiwan at that season.

The speed of the luggage delivery compensated the ten minute delay. The 2+2 configuration of the E-190 is comfortable, and the FAs do their job with a smile. On the other hand, catering is minimal, in quantity and quality.