By marathon SILVER 2659
Published on 28th September 2013
This is the end of a vacation in Taiwan, at the time when I was stationed there.

This FR starts with the arrival one hour earlier than expected in TTT from KYD, re. the previous FR. I have an enormous margin for that layover, because these are two different tickets on two different airlines. I actually accepted this as a safeguard against any problem which could happen. Actually, I did not have much of a choice, because there are few flights out of TTT anyway. The only advantage of being earlier in TTT was waiting in a more comfortable airport, because I knew that we could only change to Uni Air Flight 858 departing at 17:55 instead of our Mandarin Airlines flight at 19:10. That was assuming that there would be seats available on the former, and at the cost of a reasonable cancellation fee for the latter. This looked somewhat complicated for a moderate gain of time, and I decided to change nothing.

The display seemed to approve of my strategy, for flight UIA 857 from TSA is announced late.

At UIA's counter, there is no information other than due to the late arrival of the aircraft as the cause of the delay (in Chinese). I had guessed that by myself, especially since it was already mentioned above. 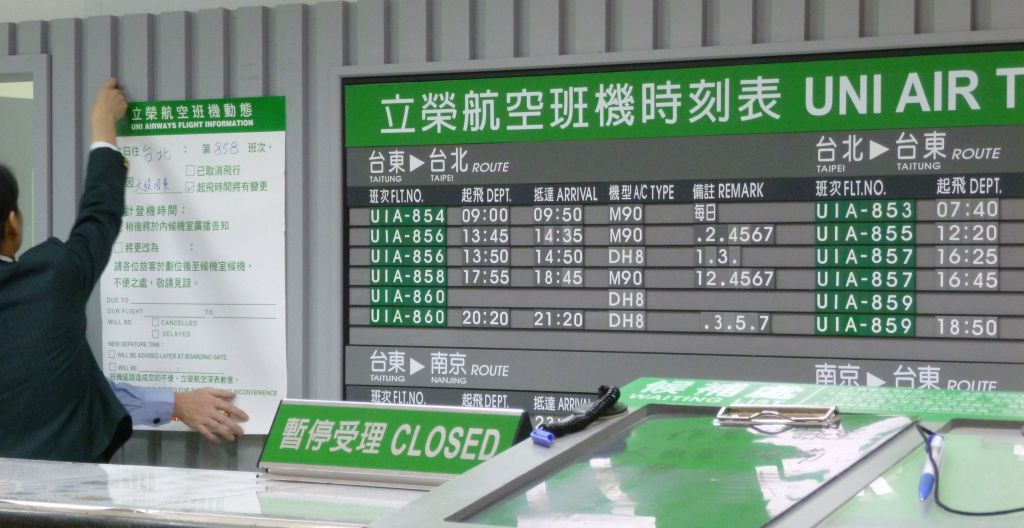 Somewhat later, the new ETD of Flight Uni Air 858 is announced: 55 minutes late. That means that it will depart only twenty minutes before our own Mandarin Airlines flight, and justified a posteriori my decision. Note that here, the display uses Uni Air's IATA code (B7). 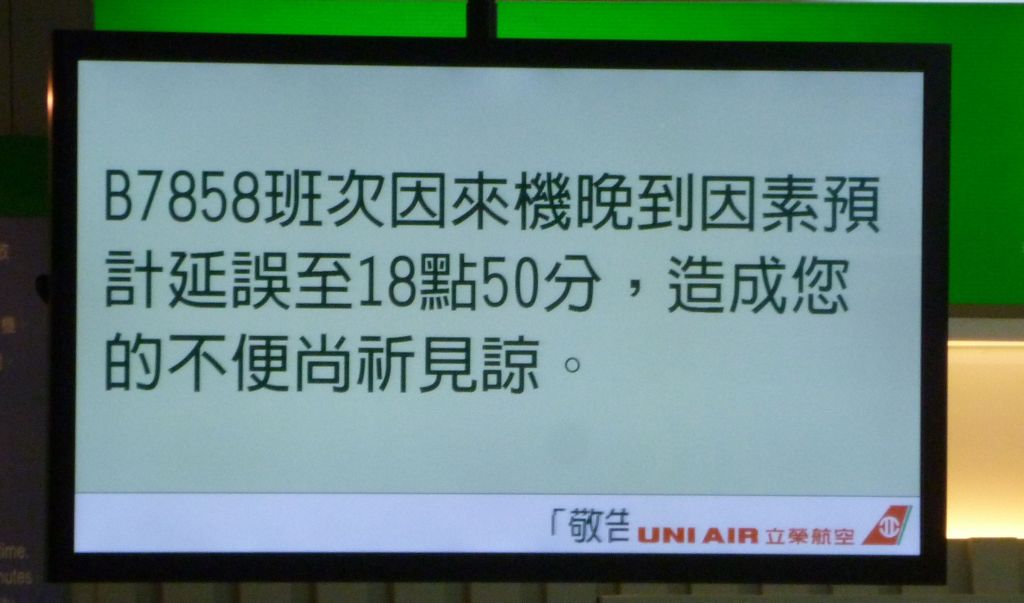 That justification did not last long, because the Mandarin Airlines flight was in turn displayed late, while Uni-Air's delay was getting worse.

There is hardly more information on the cause of delay here, but the PA announcement are more informative. In TTT, they are trilingual in Mandarin / English / Japanese, and in these three languages, I learned that the delay was due to the bad weather in Taipei. I had checked the Taiwanese weather office's website, and I already knew that weather-wise, going north was not a good idea. But staying south to tour around during a four day week-end would have meant finding fully booked accommodations everywhere. 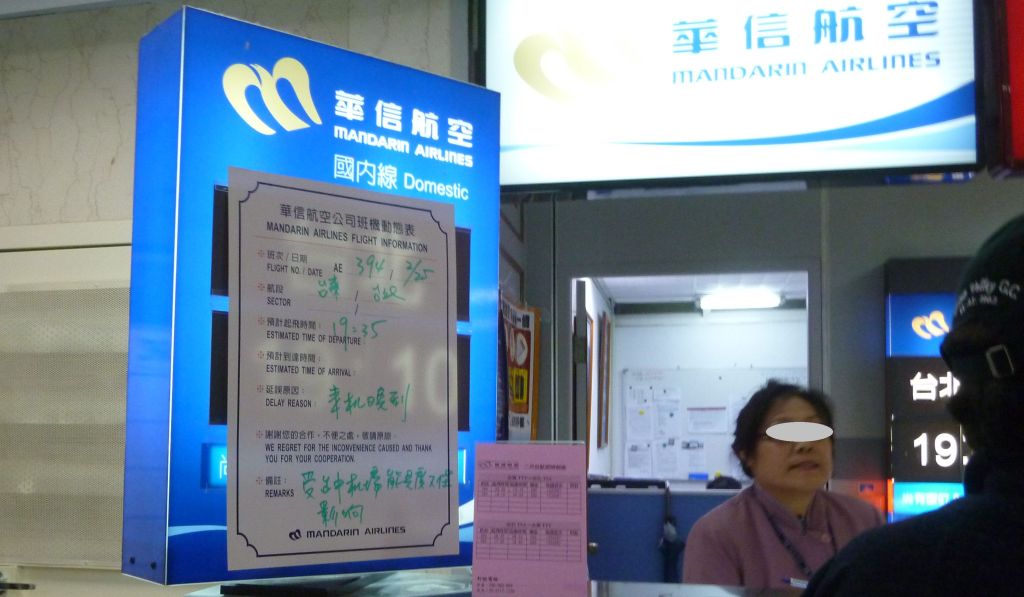 Meanwhile, I inspected TTT's landside toilets, which would be worthy of an airline's lounge…. 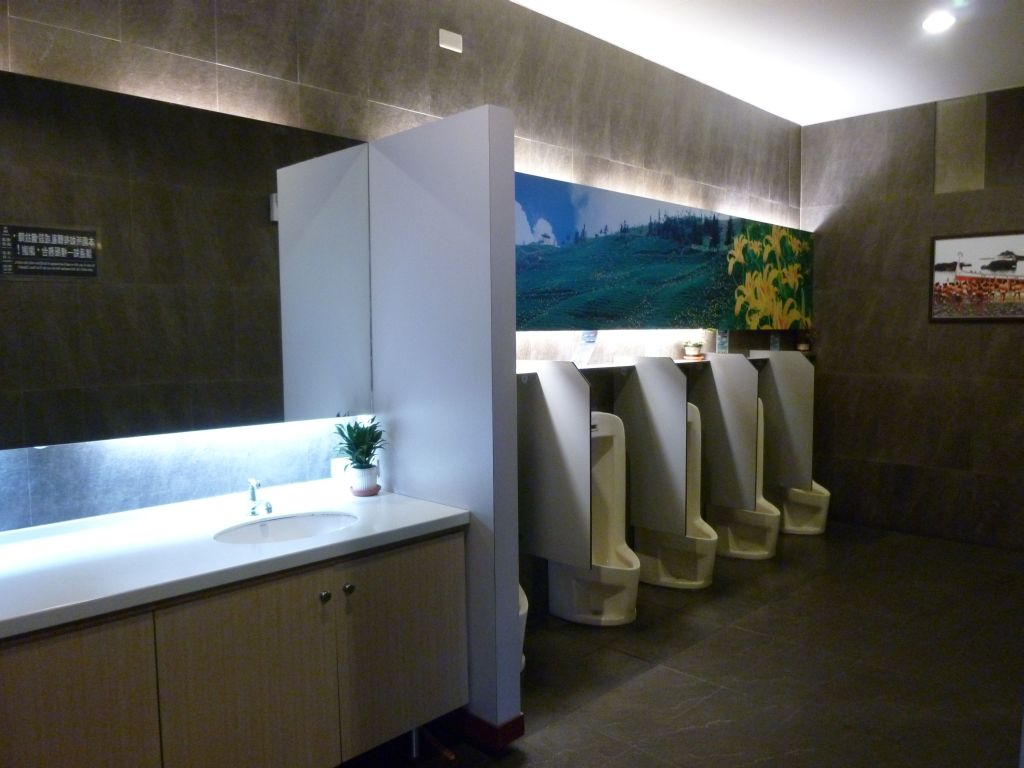 … thanks to the zeal of Ms Zheng and Ms Chen. 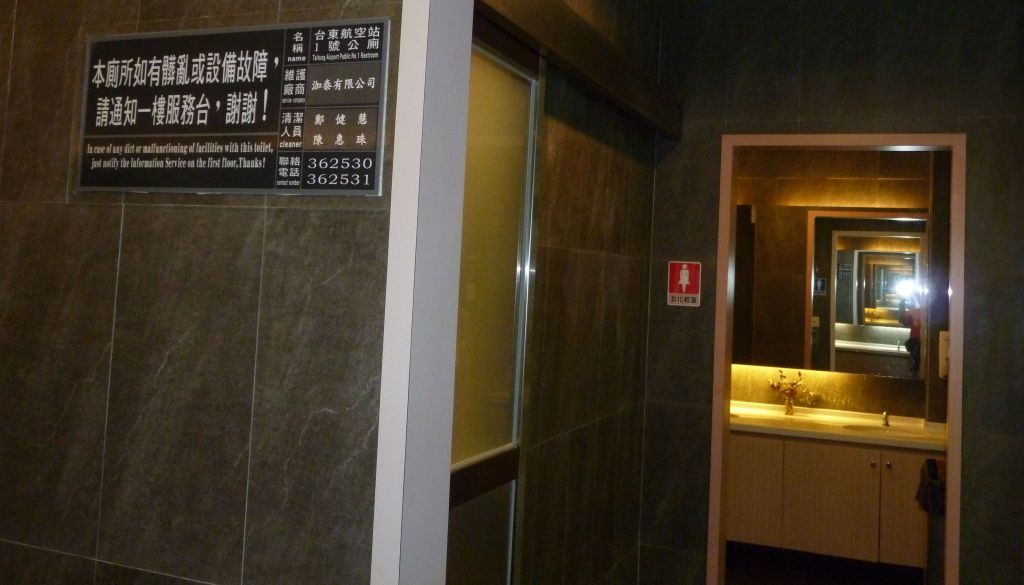 A passenger buys supplies at the local food store 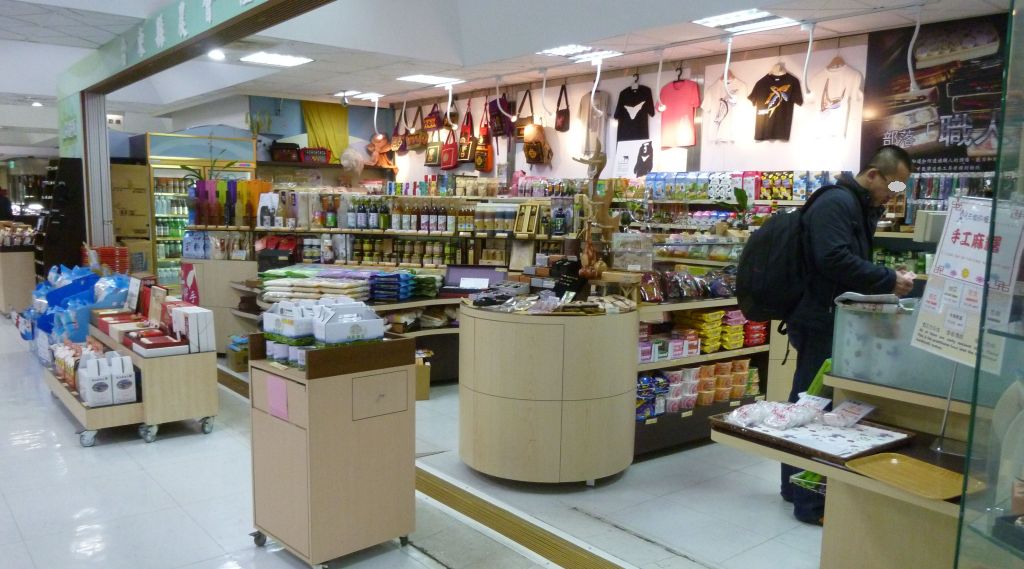 And the passengers wait calmly, and even silently.

Around 18:00, a staff brings to the counter next to that of Uni Air cookies and small drink packs. I go there, and the staff tells me that this is only for the passengers on the late Uni Air flight. That is said with utmost politeness and countless excuses, balanced by an equal amount of 沒關係 Meiguanxi = no problem / this does not matter) from my side. 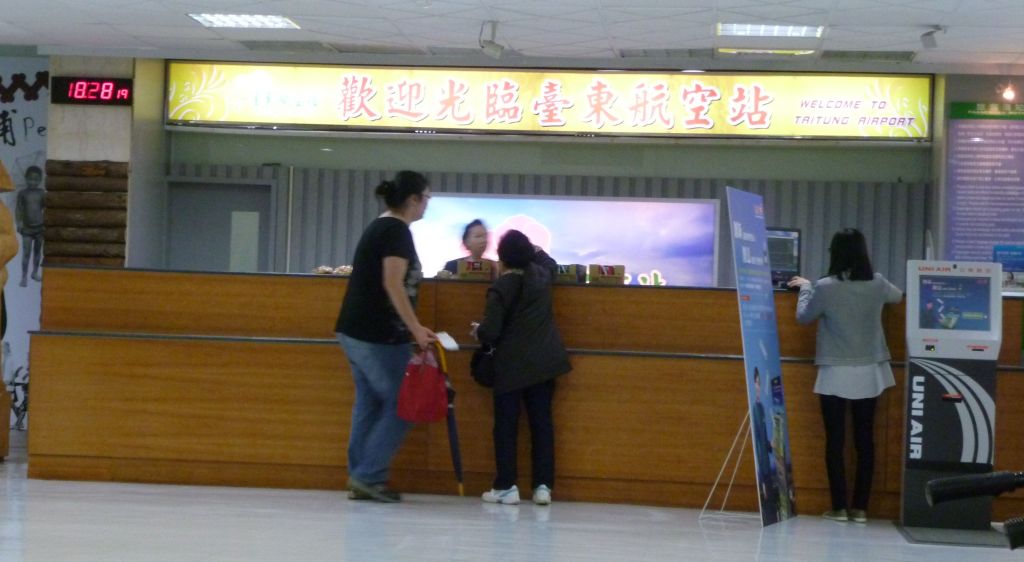 I keep wandering around in the terminal, hunting for scenes which could improve my FR, and ten minutes later, the staff waves in my direction. This is for me? Yes , she tells me that eventually, I can help myself. For me alone, by courtesy towards a foreigner who displays his membership to the Chinese speaking and Taiwan loving club, or for all Mandarin Airlines passengers ? I did not find out.

Anyway, AE wins a meal bonus for this care, especially since the flight turned out to be only 13 minutes late. 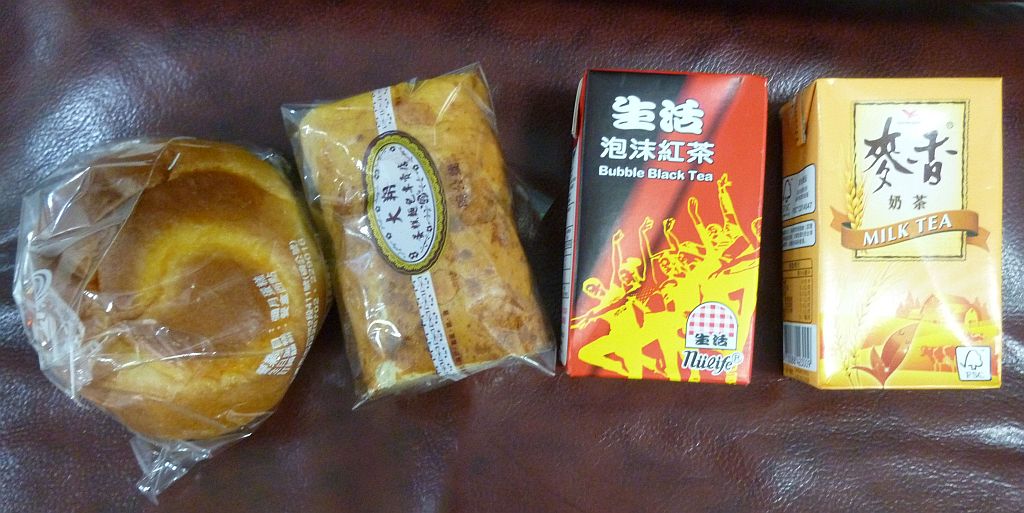 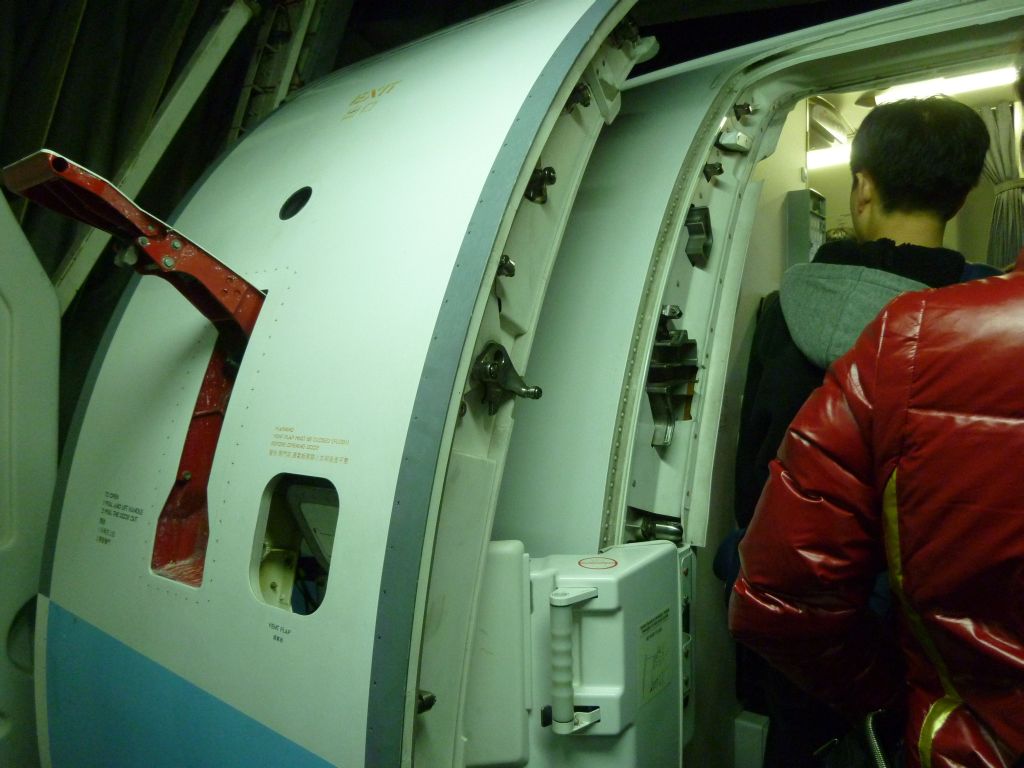 The load ratio is at most 50%, because the peak traffic was on Saturday morning. Probably to balance the plane, the first two rows and the rear are empty, but he passengers are not packed : there are isolated passengers here and there. 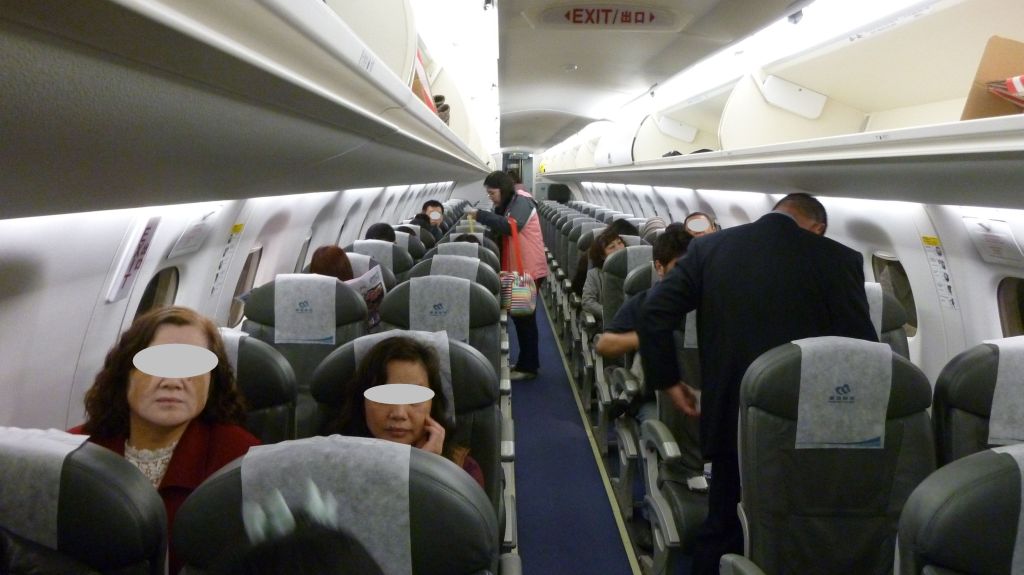 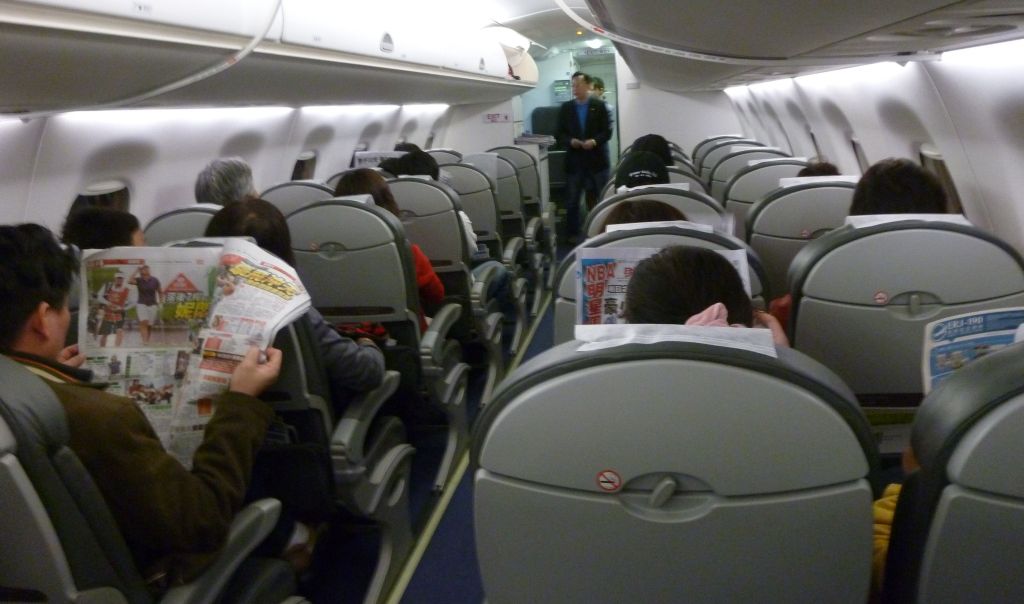 Withe a 2+2 seat diagram and a comfortable pitch, Mandarin Airlines' E190s offer the best comfort of Taiwan's domestic airlines. This is the cabin of the aircraft when most passengers had left at the arrival. 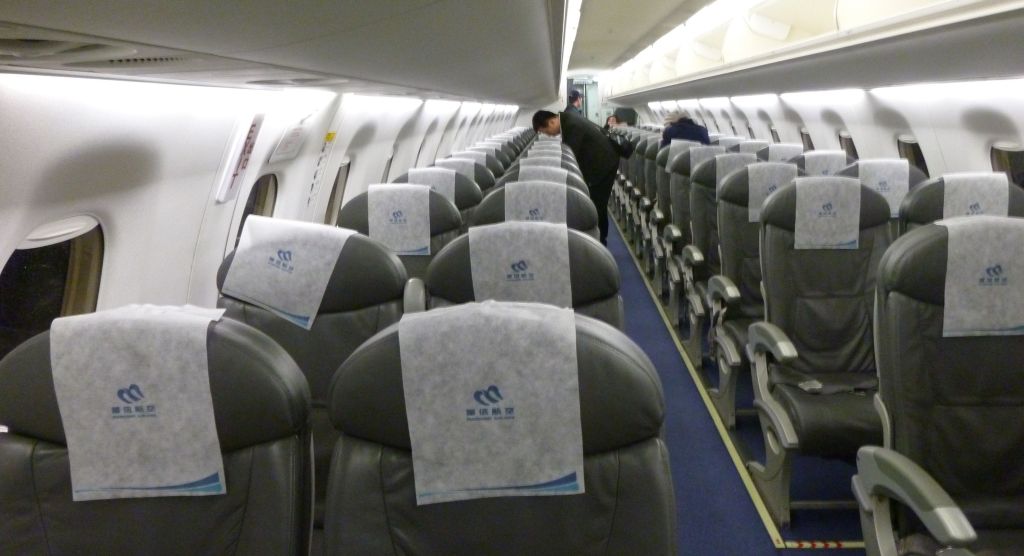 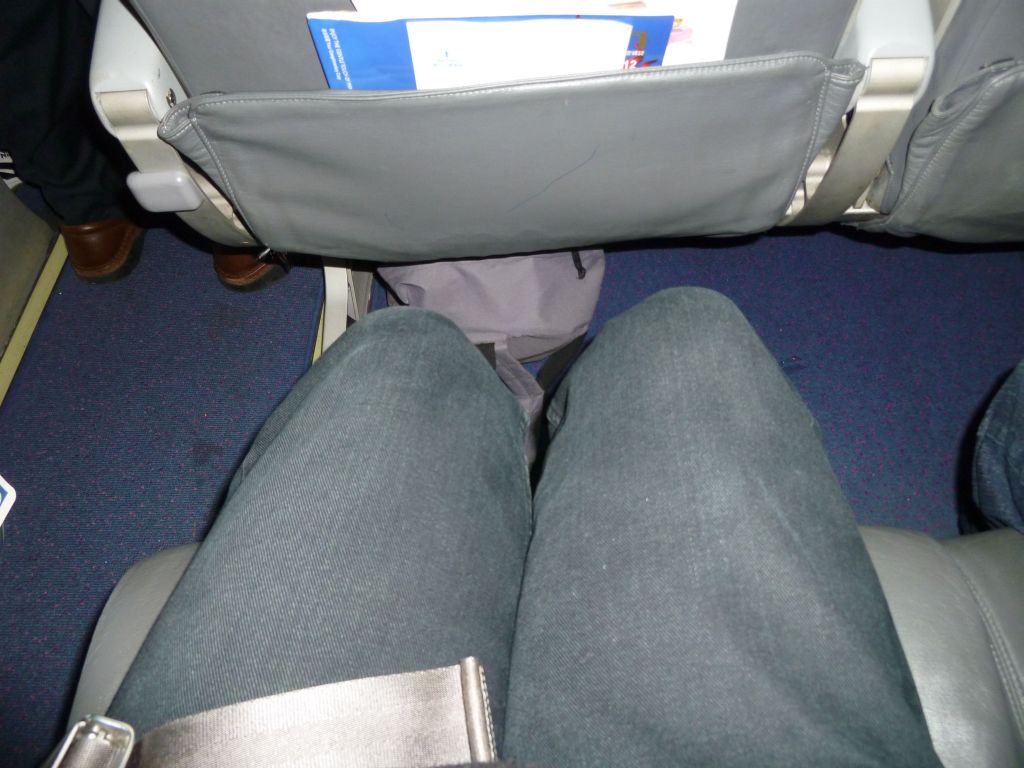 The most attentive leaders notices that I took advantage of the layover in TTT to wear a blue-jean, because I fly north beyond the Tropic of Cancer, and because I know about the poor weather at destination. 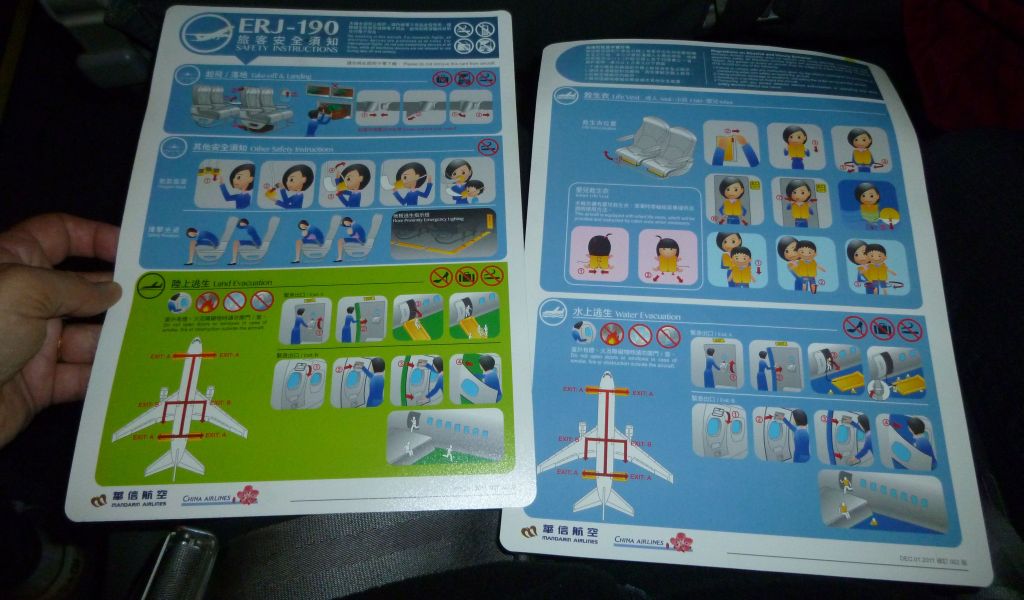 Disgusting ! Is there even coffee in there? Asked to cross check my own evaluation of Mandarin Airlines' coffee, the comment of the gastronomy expert seated in 8D, a.k.a my wife, confirms my usual evaluation of any Taiwanese domestic in-flight coffee: it is really awful. 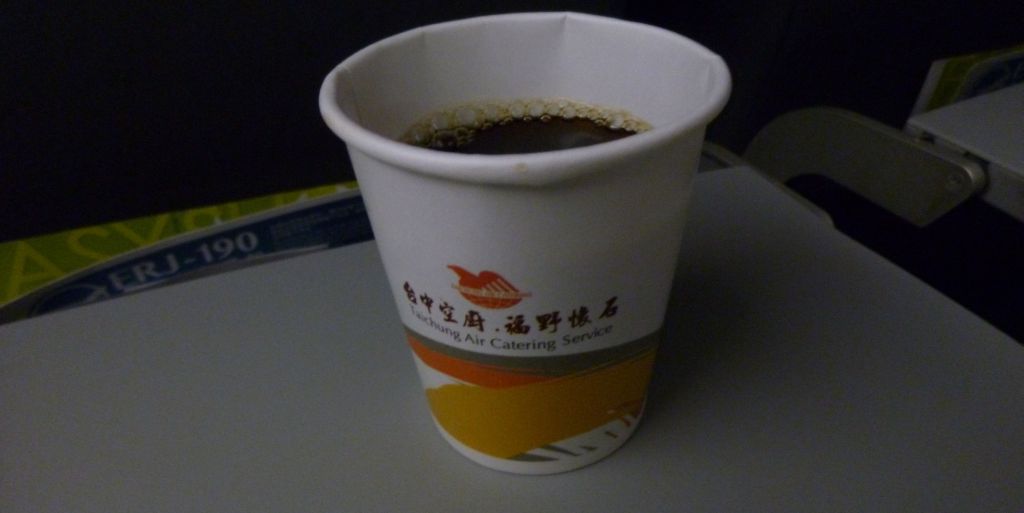 The FA do their job adequately. One of them has the uncanny look of close to fifty year old housewife, and could fit two SQ girls in her uniform. This has no impact on the quality of her service, and I do not find it useful to take a picture even though I had ample opportunities.

I offered the window seat on the right, with its spectacular view of Taipei at night to my wife; that does not change my FR much, since our small cameras are not sensitive enough for night landings.

Touch down at 20:13, i.e. 13 minutes late. Exceptionally, this AE flight does not have a jet bridge, which gives me an opportunity to take a picture of the aircraft on the ground. Out of five Mandarin Airlines flights so far, this is the third one in B-16829, the one with tourist markings on the fuselage. 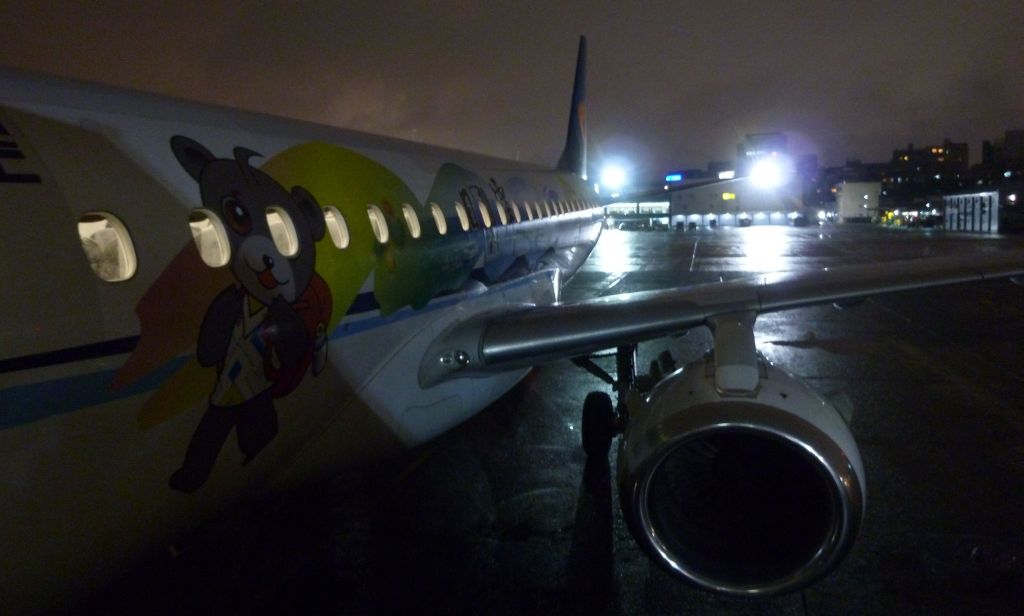 There is hard rain when we leave the plane, but there is a ground staff handing out umbrellas for the short walk to the passenger bus. This is a lull, for it will be downright pouring between the bus stop and my home.

Another Mandarin Airlines E-190 with a jetbridge.

Arrival in the luggage delivery room which is not crowded.

Signs in Chinglish, that often hilarious version of English poorly translated by a native Chinese speaker is regrettably disappearing fast, since China discovered the face losing fun that it generated for visitors. It is extremely rare in Taiwan: although few Taiwanese have an acceptable level in English, English translations are usually excellent in Taiwan.

This sign is therefore a rarity (and not an especially funny one), which may have survived because few foreigners fly on Taiwan's domestic flights: my wife and I were always the only ones on board.

I was careful not to mistake my luggage, and anyway, a TSA staff checks that the luggage tag number matches the tiny receipt given at check-in. The number was hand written on two of them. 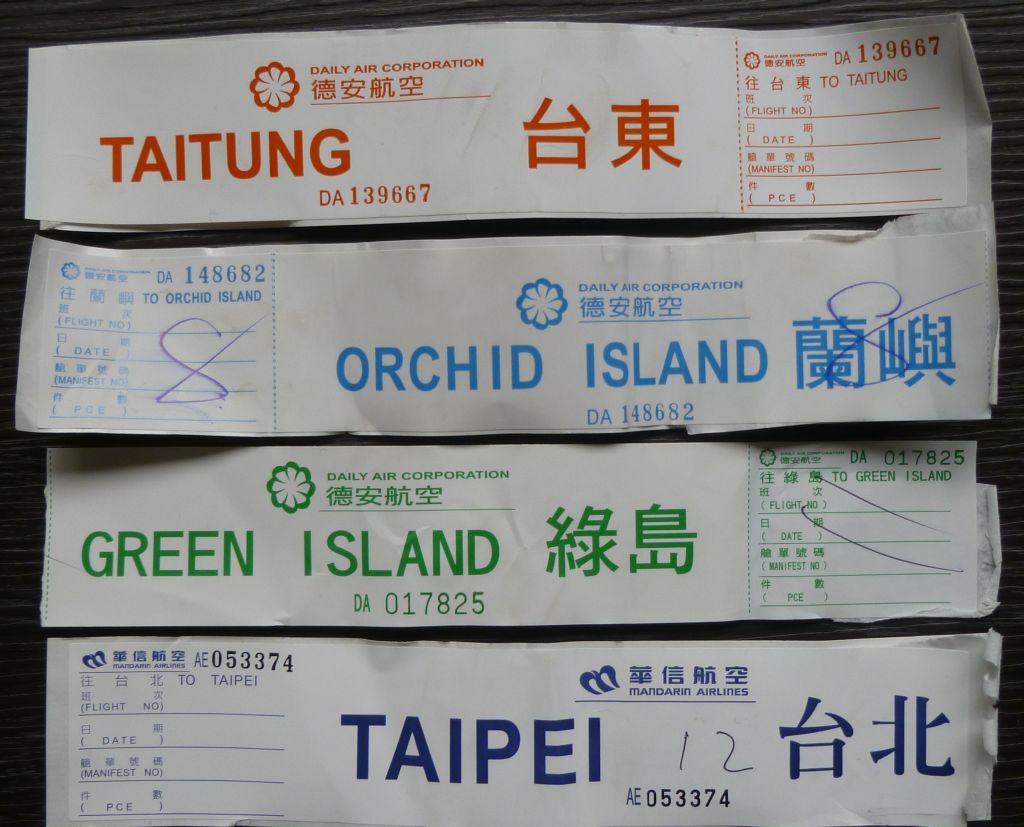 Note that the domestic flight luggage tags do not have a bar code, and do not look much like those of international flights. There are discoveries all the time on Taiwanese domestic flights. By the way, luggage tags never made it as a must-display on Flight Reports. Unlike safey cards, silverware and other such items which are not supposed to leave the aircraft, they belong to the passenger, and I have a fair collection by now, with some unusual IATA codes. Not that the Green Island luggage tag is green, of course.

The display alternates between English and Chinese, and you get both here in a single picture. 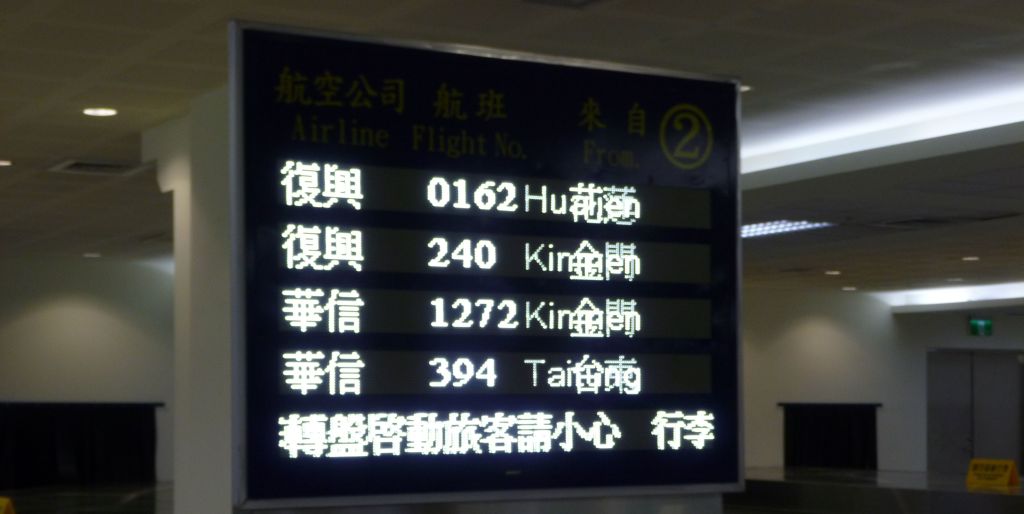 Once arrived in the public zone, the display of the flights landing in TSA shows that this week-end is out of the ordinary, with flights delayed by the weather, canceled flights and additional flights. Note the curious additional flight GE2420 from Taipei (?). 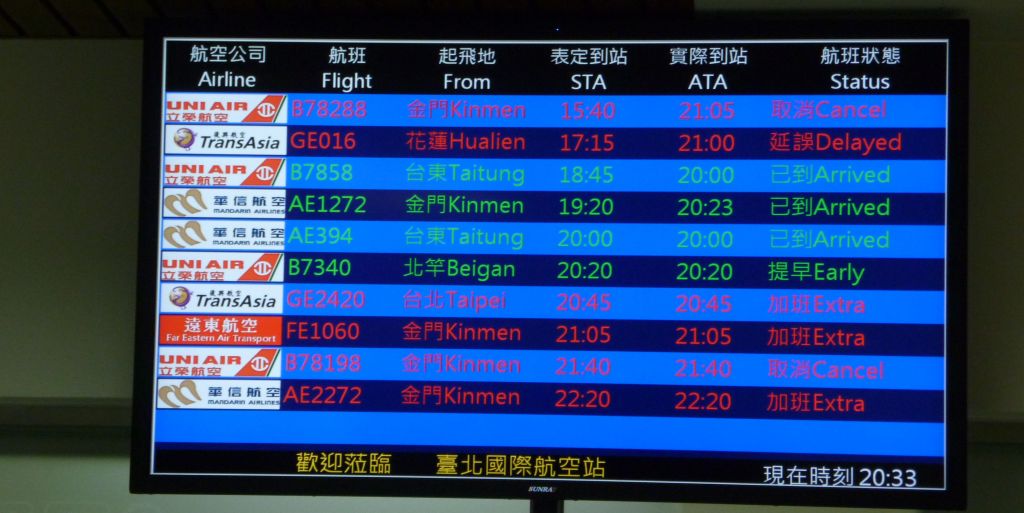 We are close to the closing time at TSA, and the departure hall is empty.

On the other hand, there is still an employee at the information counter; notre on the left of the red leaflet stand more self service glasses. 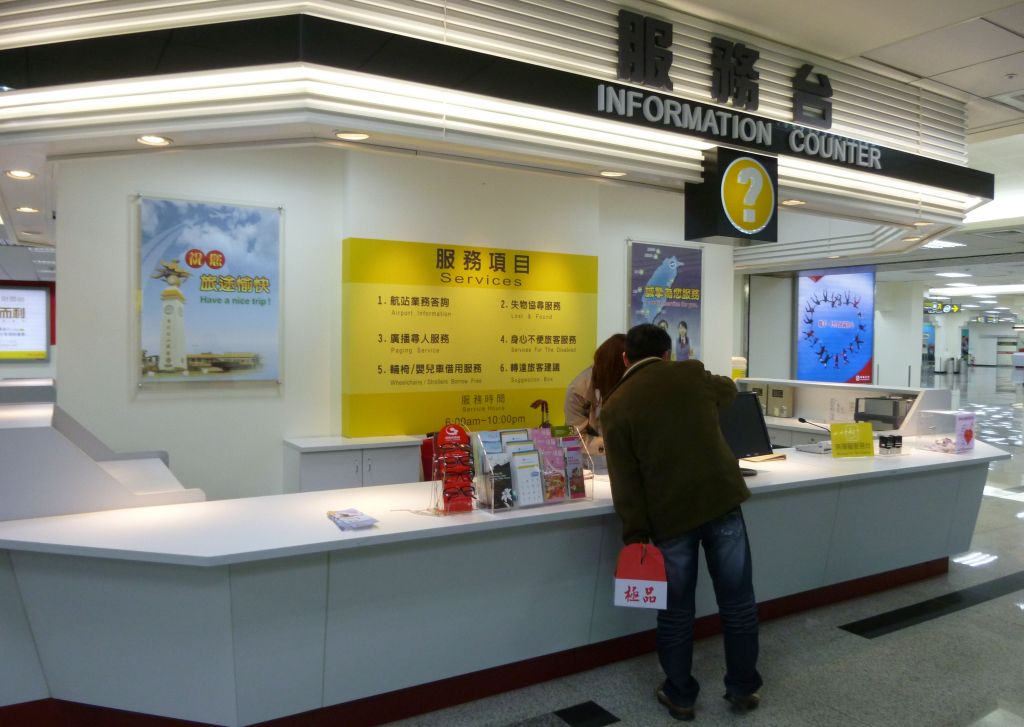 That Saturday is the first evening of a four day week-end: Taipei is quite empty, and the bus to my home is completely empty: we are the only ones on board the bus departing TSA. The partially orange seats are reserved to priority passengers (senior citizens, handicapped persons, pregnant women, young children). 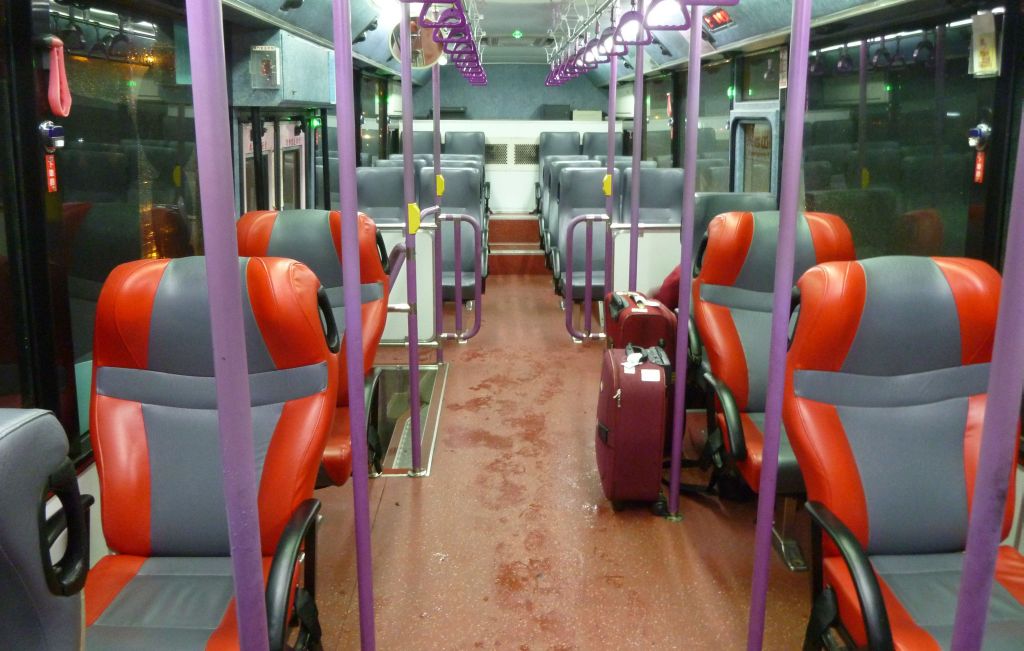 I now switch to my history lesson, because you cannot understand Taiwan if you do not know why February 28 (a Tuesday in 2012) is a bank holiday there. That holiday commemorates the riots of February 28th, 1947, the day after an ordinary police check of a woman selling counterfeit cigarettes which turned awry, and which spread like wildfire in Taiwan, because the Taiwanese disappointment was on par with its initial enthusiasm when Taiwan reverted to China in 1945. Chiang Kai-shek, who was still on the Mainland, sent brutal reinforcements, and declared the martial law which was to be lifted only 38 years later, after the end of the dictatorship and of the White Terror.

The Taiwanese democracy has handled its painful past, and honors that day all the victims of this blind repression, many of whom disappeared without a trace. The Kuomintang, the party which is in power at present, is the direct heir of the dictatorship, but it too became a democratic force. The day when June 4th will be similarly a holiday in Mainland China, the face of the Asian world will have changed.

A moment of intense emotion during the official commemoration on February 28th, 2011, in the Peace Park 228 (= Feb. 28) in the center of Taipei. 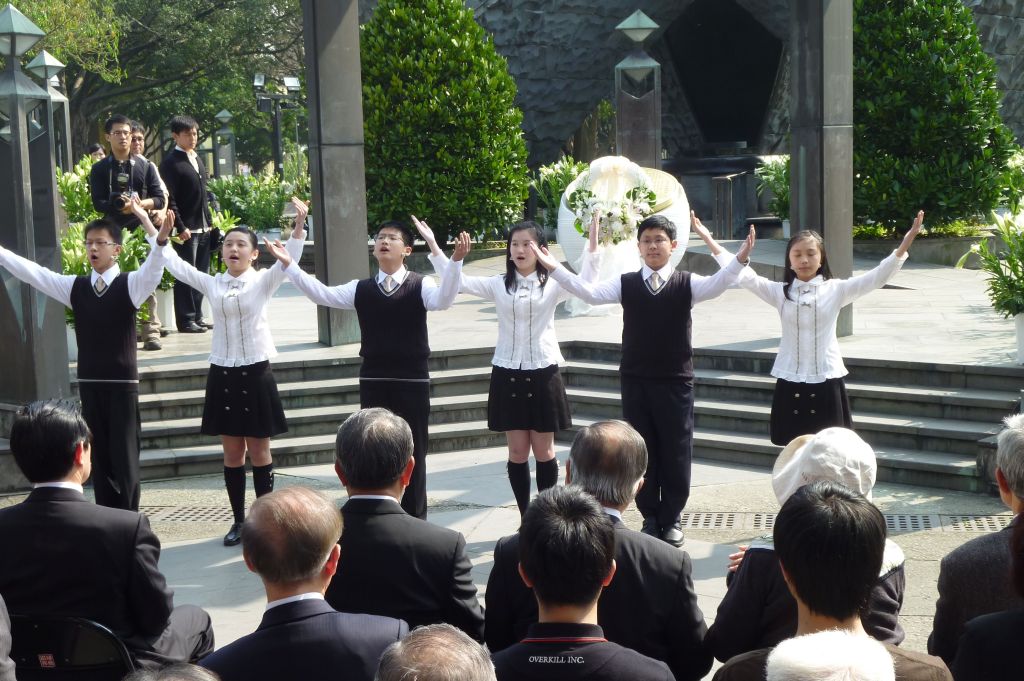 The speech of Ma Ying-jeou, who was to be reelected President of the Republic. 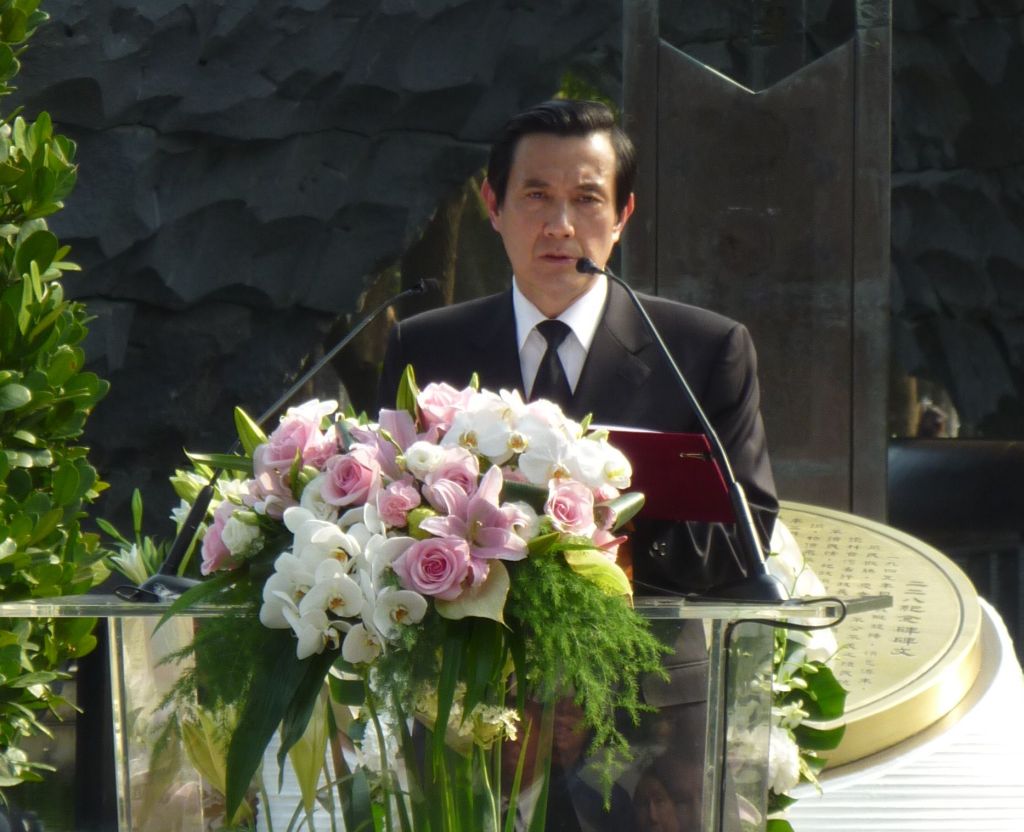 I did not have any official credential, and yet with some audacity, showing my passport and after and airport-like security check, I was seated five rows behind Ma Ying-jeou, his vice president Wu Den-yih and Taipei's mayor Hau Lung-bin who also delivered a speech. This is possible in Taiwan, and nowhere else. 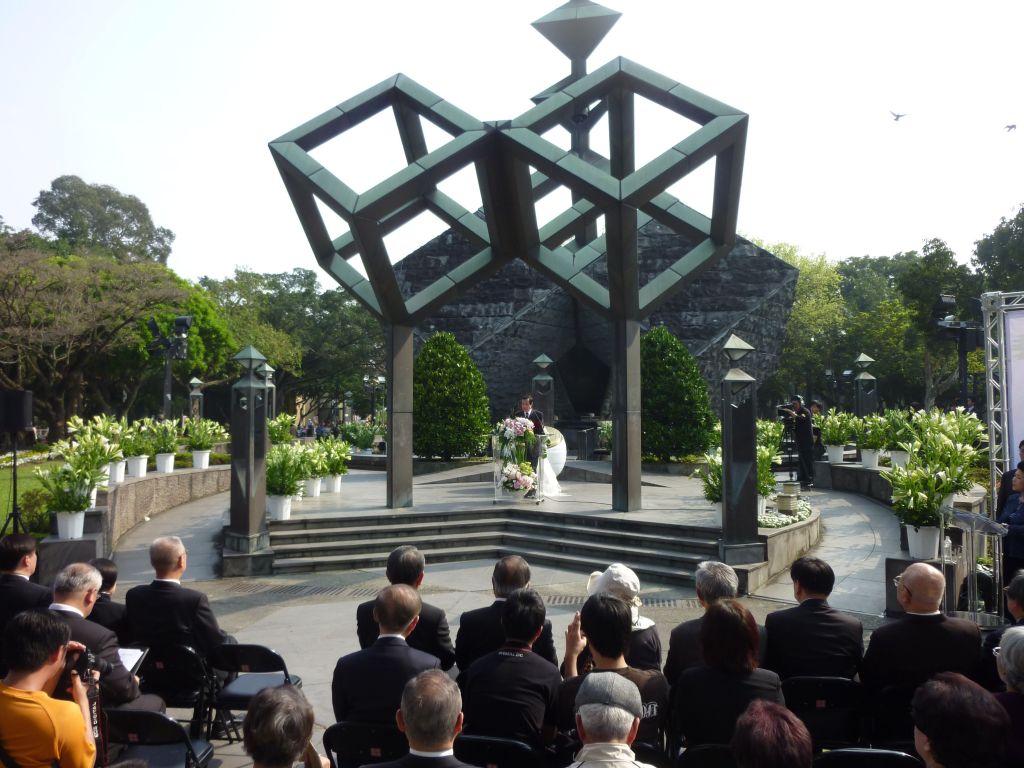 And like the officials, the survivors, the orphans and the simple citizens, I laid a white lily in remembrance of the victims of the White Terror, and also in remembrance of the French Resistance members and Righteous Among the Nations in my family who risked silently their lives in the dark so that I could live in bright light. 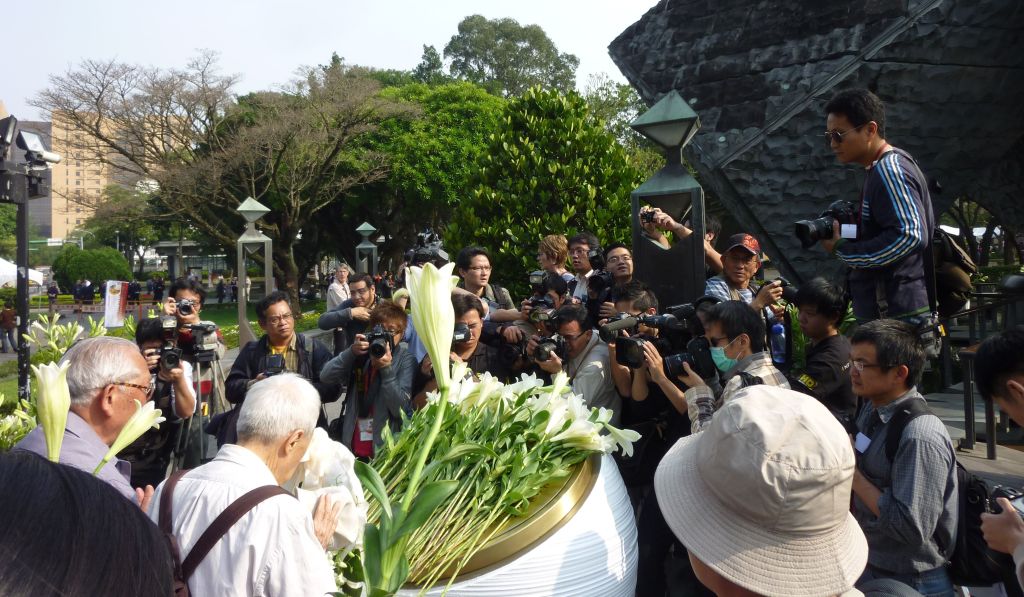 How many airlines offer you a snack and a drink at the airport for a quarter of an hour delay? Mandarin Airlines started as Taiwan's non-flag carrier, created by CI when Mainland China blocked its development because of its name and of the Taiwanese flag on its aircraft. Now that the China-Taiwan relationships have improved, it became an excellent regional airline, whose comfort offers no surprise since its fleet has to date E-190s only.