By marathon SILVER 2534
Published on 28th September 2013
Kaohsiung is Taiwan's largest harbor, far ahead of that Keelung located at the northern tip of Taiwan, and the number 4 or 5 in the world, from which nearly all Taiwanese exports have been shipped. From the low quality junk of decades ago to today's notebooks, they all left in sea containers, and it is the honor of the humble but essential actors of Taiwan's economic take-off that there is there an unusual art exhibit every two years: Container Art, also called Artbitat. The next one will (probably) be held from mid December 2013 to end January 2014. 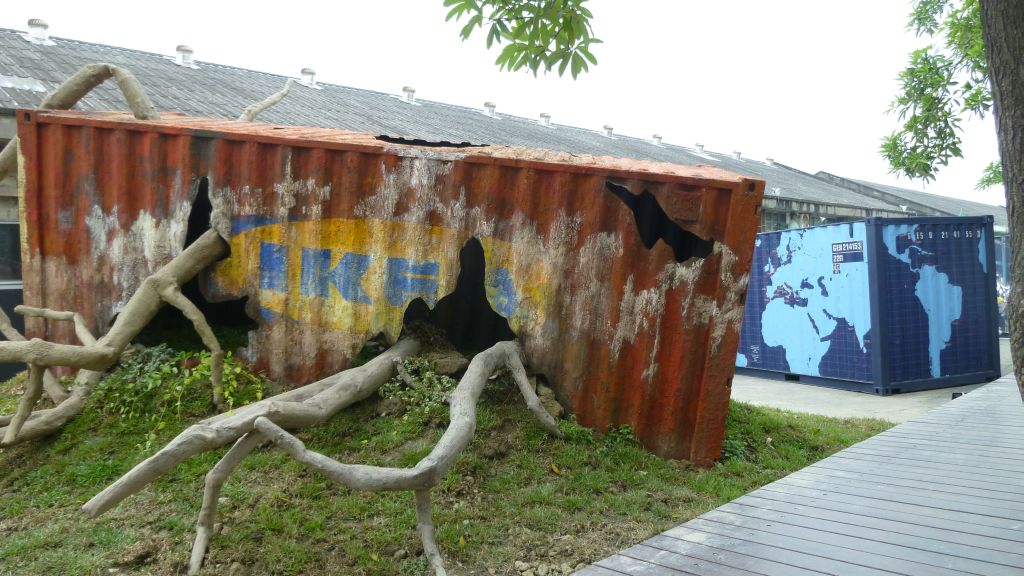 In the background, an artist has painted on a container the map of its travels around the world, from its initial departure from Ningbo (China) to its final arrival in Kaohsiung in 2011.

But if you miss the next edition, there is more than enough to fill your week-end in Kaohsiung. I doubt this replica of a Japanese plane, used in Seediq Bale, THE, Taiwanese film of the year 2013, 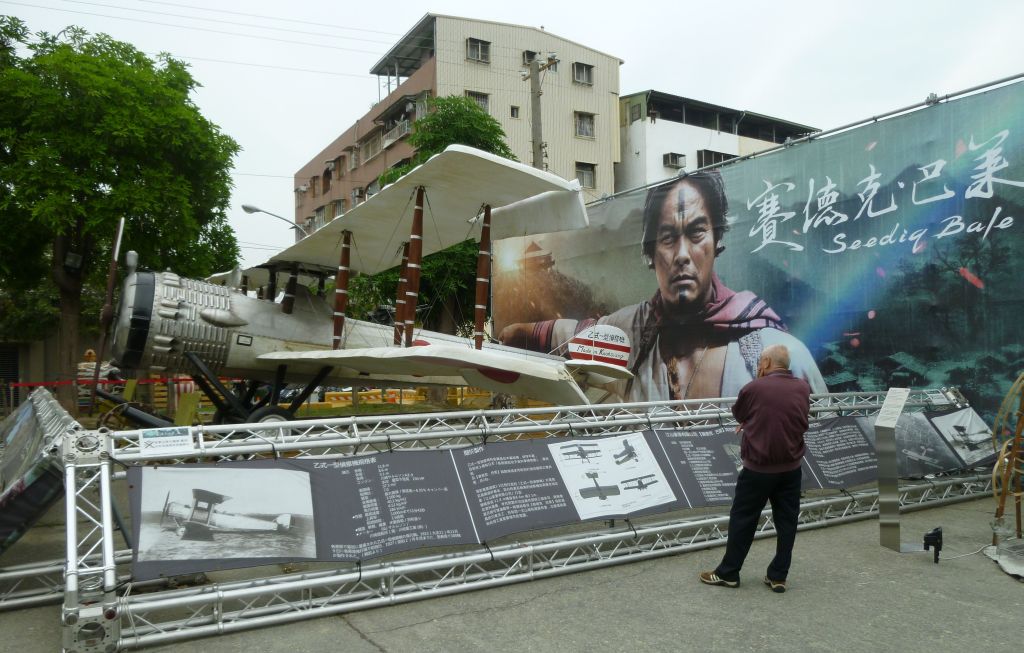 but you may hesitate between Leaping Tiger and Crouching Dragon 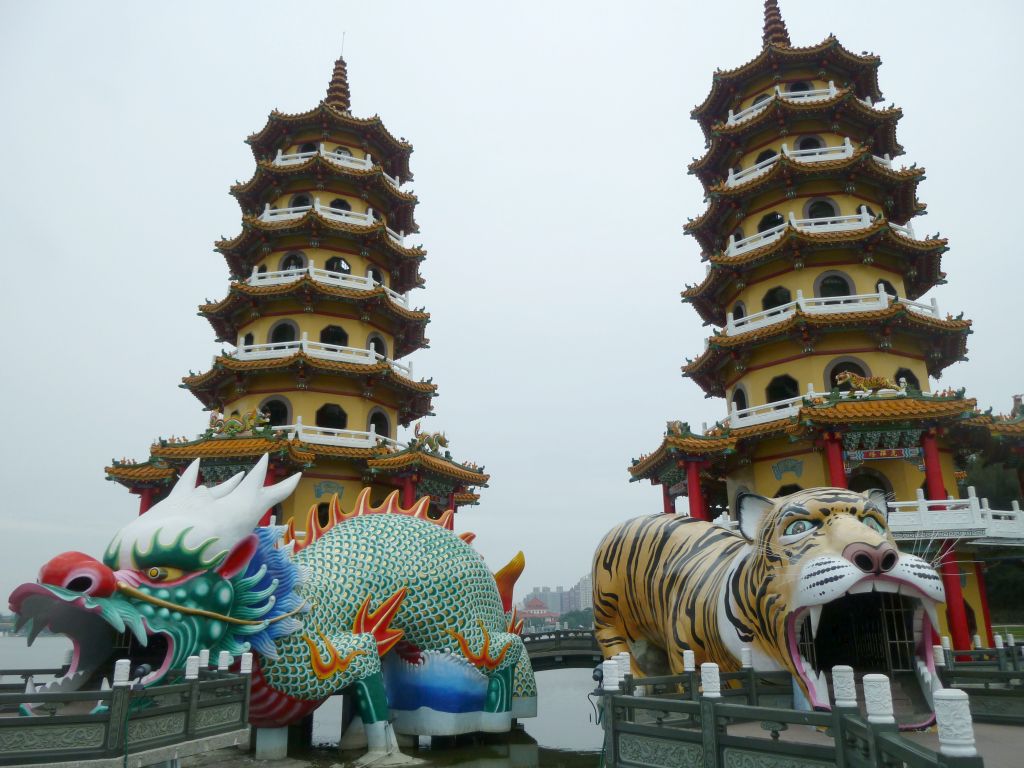 Or find by chance an art exhibit like this one (Trick Art II : paintings of six Japanese artists, designed as backdrops for visitors. This is a unique case of paining exhibit where you are supposed to come with you camera and use your flash).

The picture on the right has been turned 90°: the two girls were lying on the ground (note the shark on the far right of the other picture)

You may prefer unplanned discoveries at the temporary exhibits of the Fine Arts Museum. 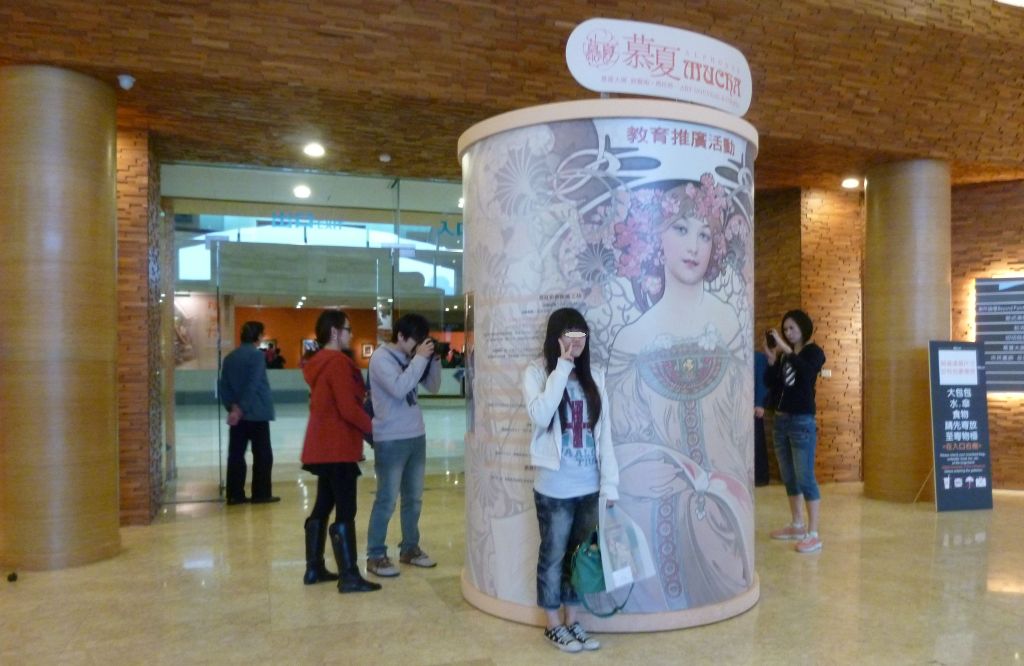 At the end of a week-end in Kaohsiung, I flew back to Taipei, but TSA-KHH is a perfect example of a line which has been nearly killed by the opening of a high speed train line which is comparable to Paris-Lyon in terms of distance and economic importance of both end stations: there are only three round trips on Friday evening, two on Sunday evening and two very early on Monday morning, for commuters who spend the week working here and the week-end there. To date, and to my knowledge, this line is one of its kind in FR so far.

There is actually little point in flying rather than taking the train which is faster, has no check-in hassle, slightly cheaper, much more frequent, allows much more luggage without waiting for them at destination, has no electronic device restriction and is much more comfortable. If you are unconvinced, these are some pictures of Taiwan's HSR:

From outside, the looks beat those of an E-190 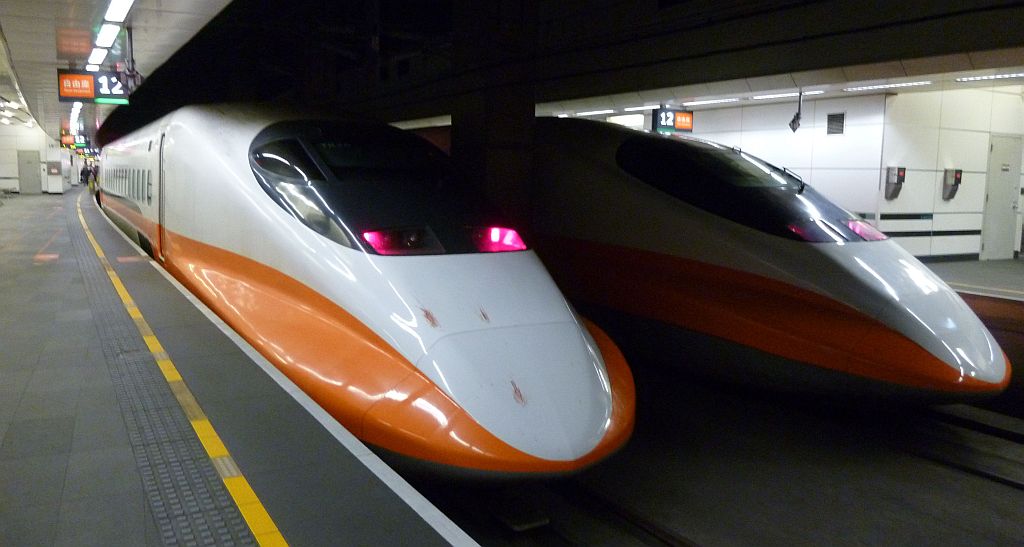 And once inside, OK, it is a 2+3 seat layout, but call me when you see such a gigantic seat pitch in economy in a plane. 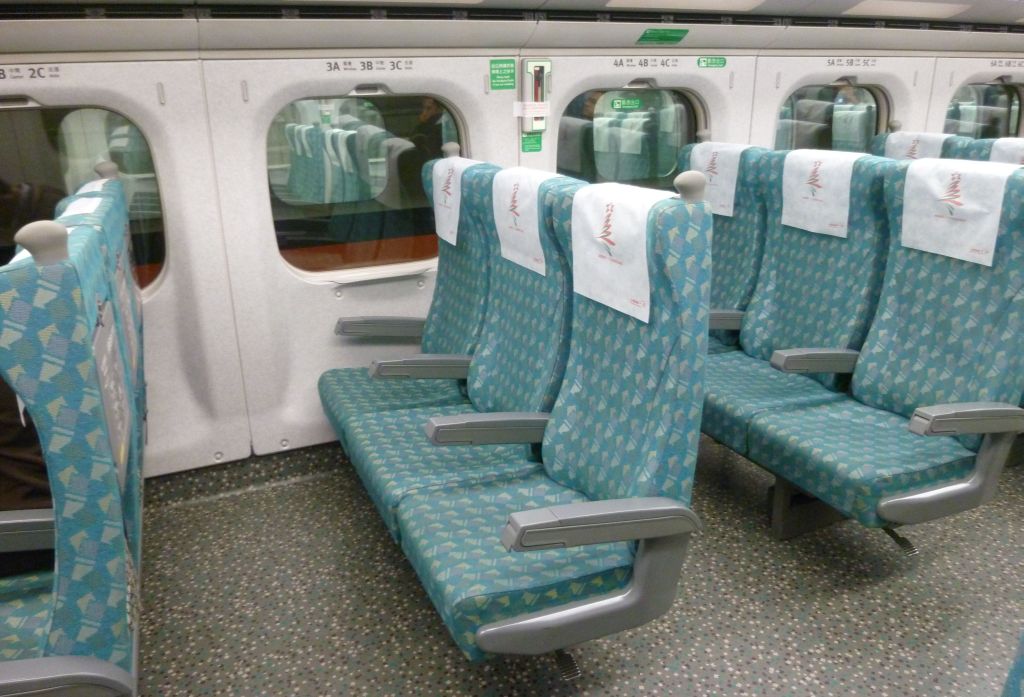 What is sticked to the reverse side of the tablet is not the safety card like in some low-cost airlines, but the map of the train with the location of the toilets, etc… 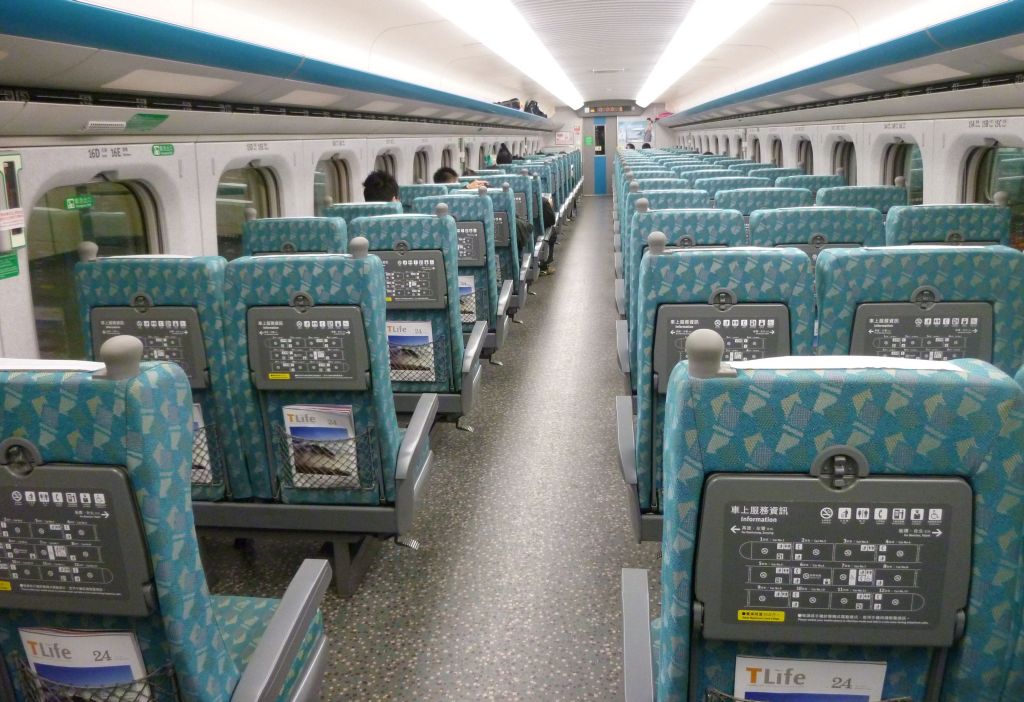 Flying is not totally stupid, especially since unlike ORY and LYS, both TSA and KHH are very close to the city centers and served by the subway. I took the train on the way in wince there was no plane on Saturday morning, but I flew on the way back to discover another airport. Apart from that, it was a night flight in a plane that I knew already.

Talking about the subway, these are the toilets for babies at the Kaohsiung International Airport subway station. Better not show this picture to the cleaning staff at Paris subway authority: they might suffer from nervous breakdown. 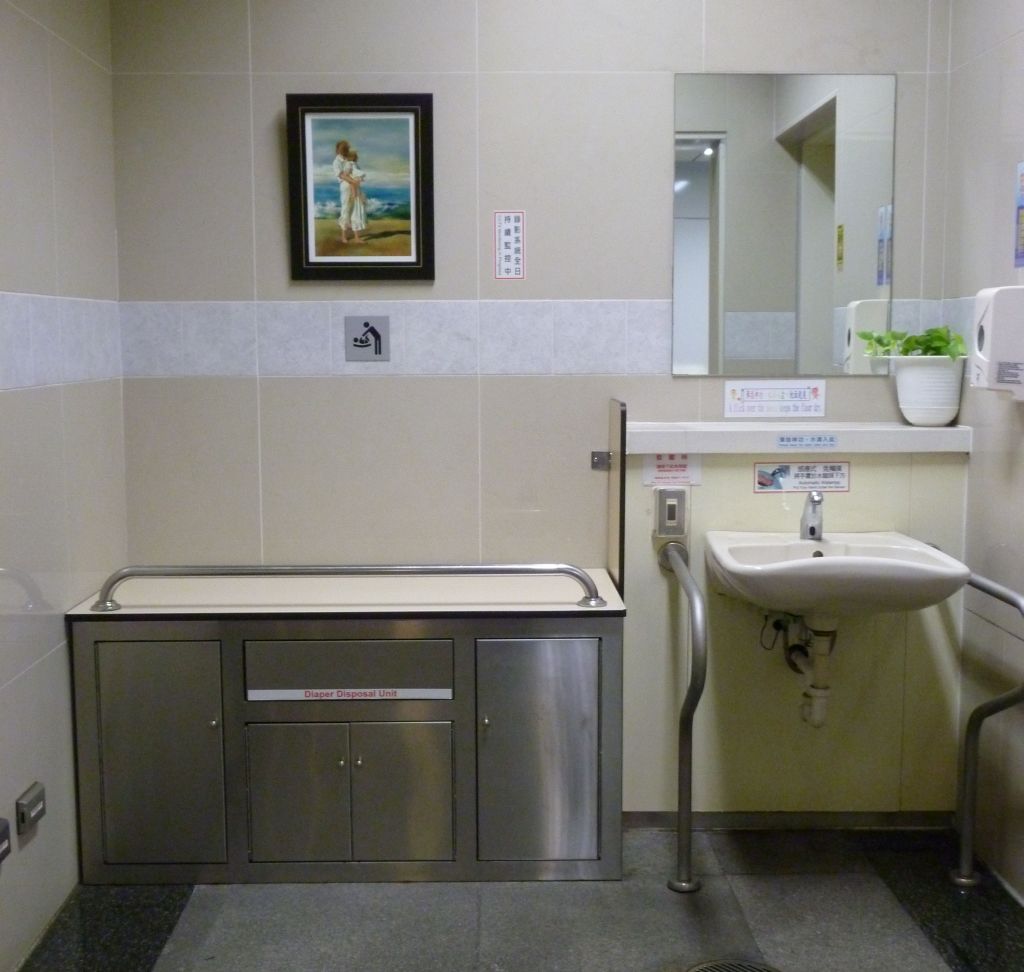 It is not crowded on the domestic side of KHH on a Sunday evening, even though around fifty inhabitants of Penghu waited for their delayed flight for nearly two hours. My flight was the last one out of KHH… at 20:10. Domestic flights stop very early in Taiwan. 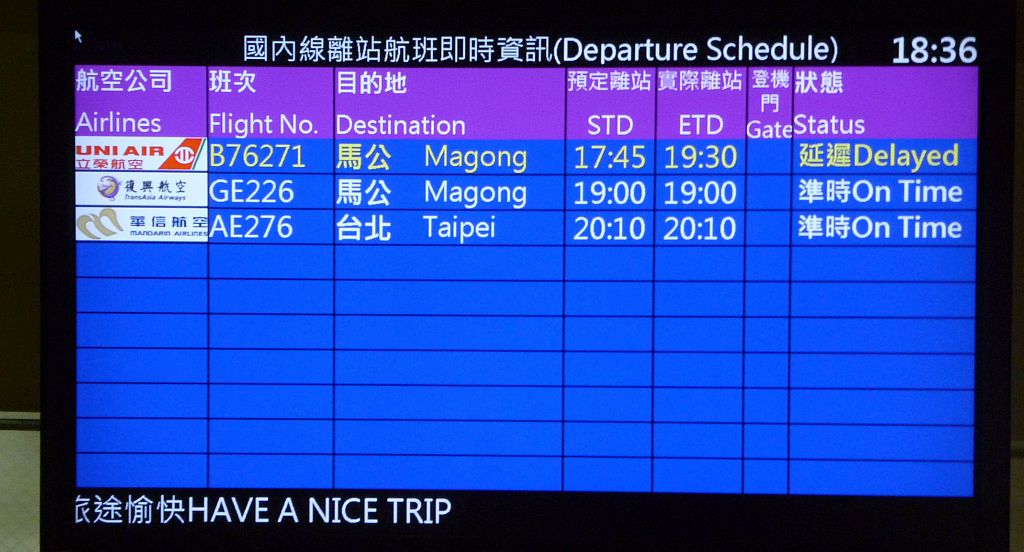 Before taking off, you must check in. Where? From left to right, you can recognize TransAsia Airways, Far Eastern Air Transport, Uni Air and Daily Air, but where is Mandarin Airlines?

OK, there are two self-check in machines on the left, mentioning clearly GE (TransAsia) and AE (Mandarin) flights, but the menus were in Chinese only, and I failed in my navigation through them. Fortunately, there is an information desk. I do not know if anybody speaks English there, but I did learn that the flights of Huaxin Hankong are managed Fuxing Hangkong, which was not obvious since there is not a single sign mentioning it. In short, for a Mandarin flight, ask TransAsia, and I obtained without a problem a windows seat on the right, which my readers know to be the best side when landing in TSA.

Like for my previous flight (LZN-TSA), my BP has number 007, but I have doubts about my permit to kill. International flights are handled upstairs, probably because of the jet bridges. There is an observation platform, but it was night and slightly raining, and I saw no point in going there. Like in TSA, there is a separate counter for checking in luggage, one for each airline.

There are toilets in KHH (clean, but more worn that those of the subway station which is brand new), and also a nursing room, like in TSA and Taipei's major subway stations.

The boarding room has a spectacular decoration of dragons around a pillar (a traditional decoration in Taiwanese temples). 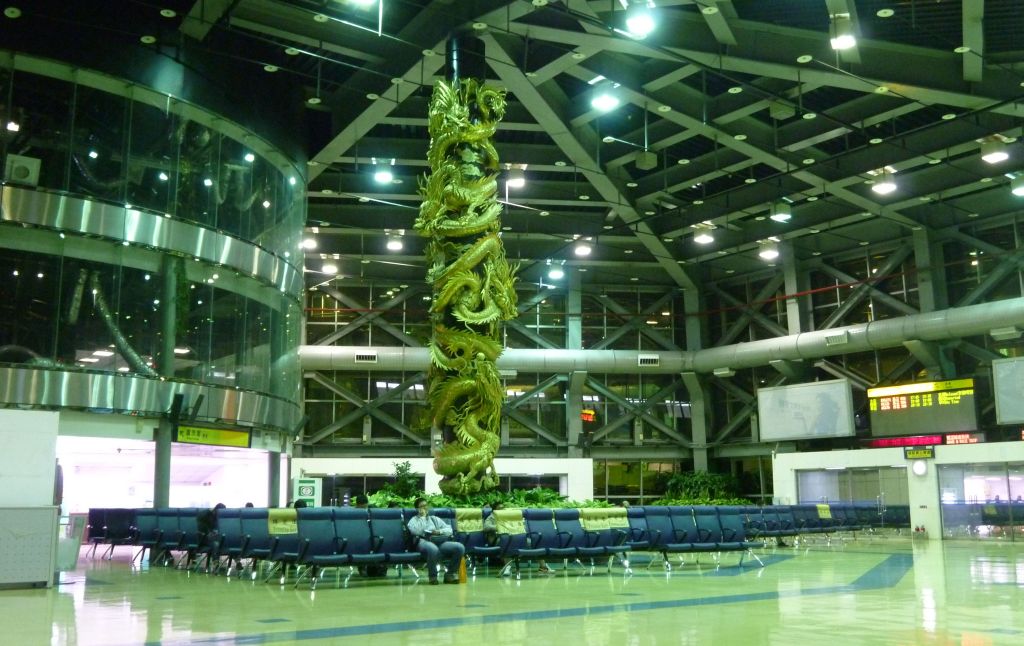 No free wifi network, but my 3G receiver provided the internet access I needed for the corporate screenshot. 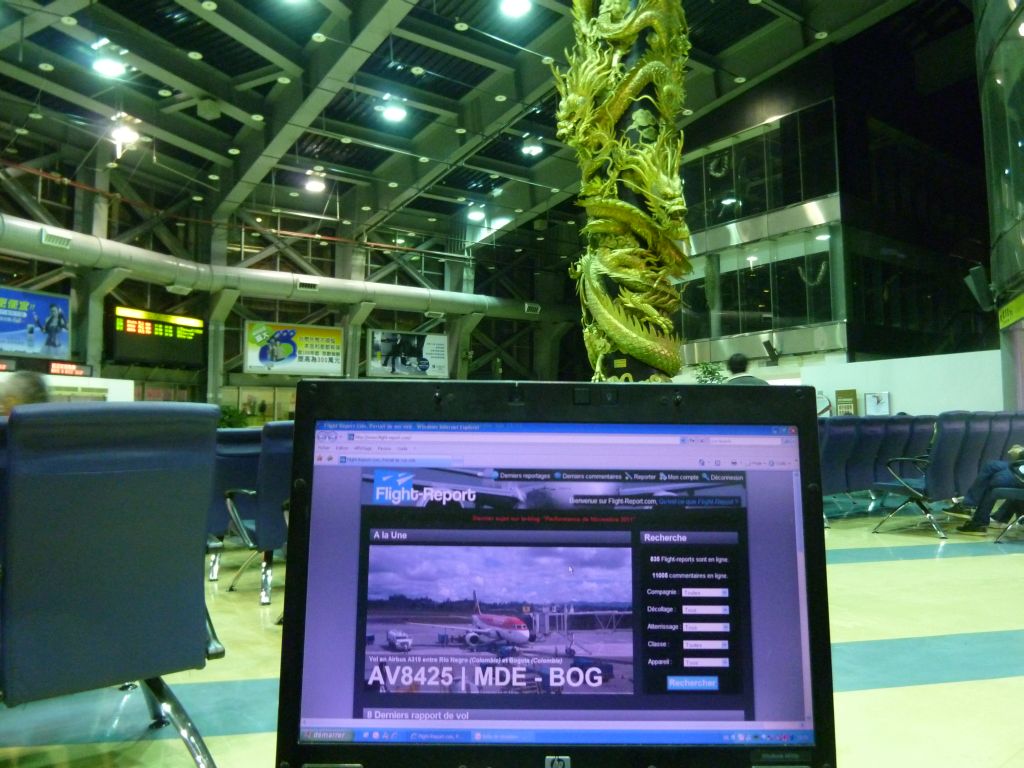 You may not notice them when reading this FR, but the air conditioning vents overhead were poring ice cold air no matter where you were seated. A good fleece jacket was mandatory, and a wool cap was advisable (I only had the former). 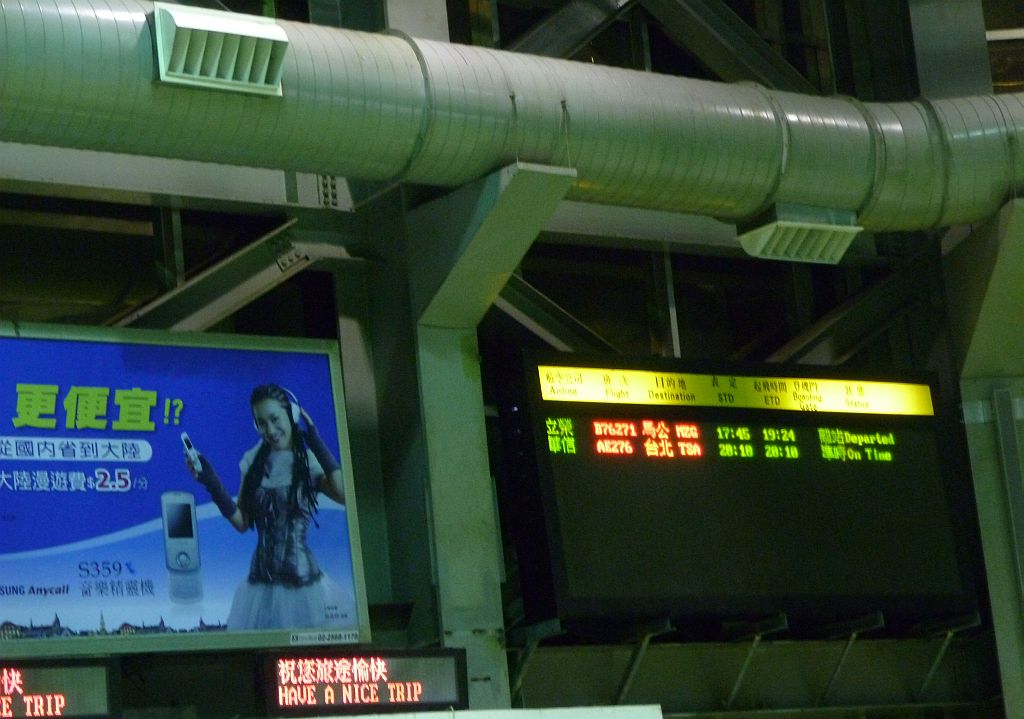 Boarding of the Uni-Air flight was announced in Mandarin, Japanese and English, but for my flight, it was Mandarin only (small wonder for Mandarin Airlines!) Actually, when you are on the last flight of the evening and you see all remaining passengers stand up, you do not need any foreign language skills to know that you have better follow them.

There is some bad faith there: the PA was in Mandarin only, but this display alternated between Chinese and English.

Like in Kinmen, passengers first walk outside (but sheltered from the rain or sun), and the BP and ID checked is performed at the last moment. 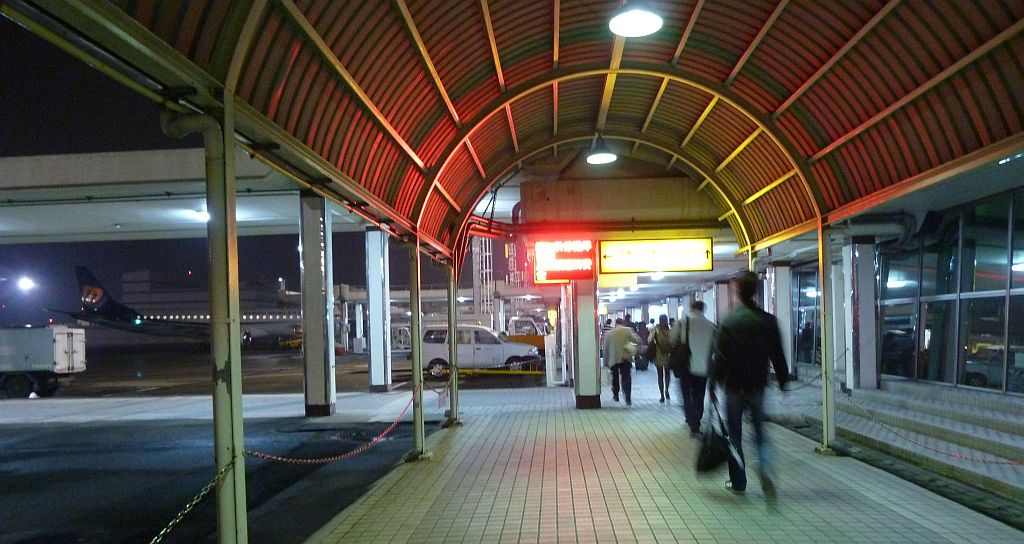 Plane spotting is limited that late, but there is an Eva Air MD-90 at the limit of the international zone. Its ownership changed six times during its fifteen year life then, alternating between Eva Air, Uni Airways and Far Eastern Air Transport, which all are Taiwanese. 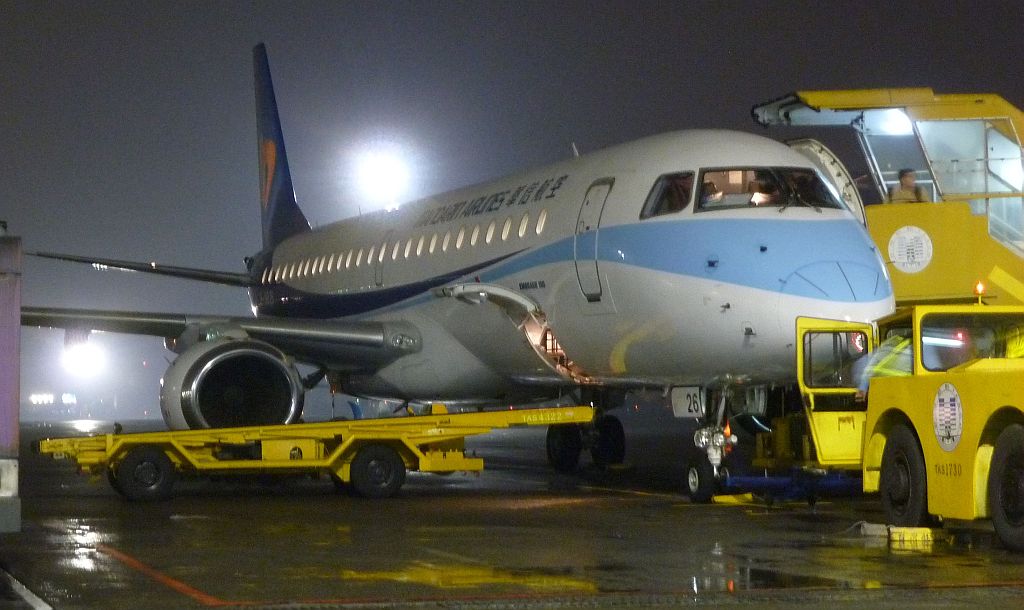 If your plane is far away, there are umbrellas with the Transasia logo for the passengers (a Transasia ATR-72 is in the background). 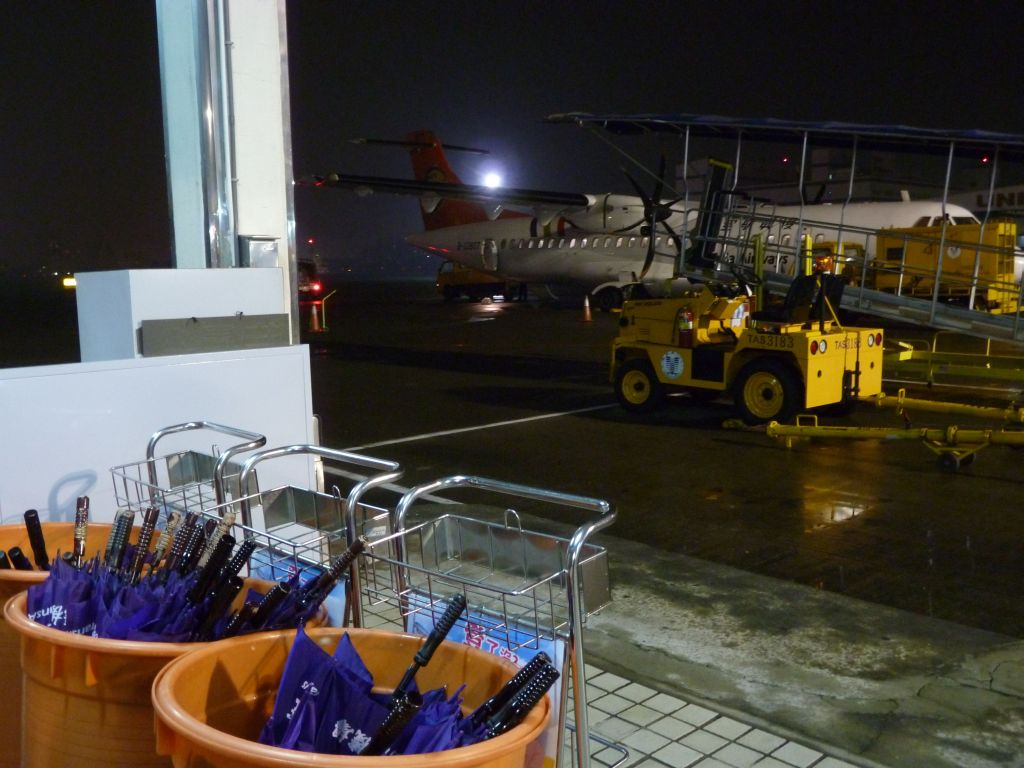 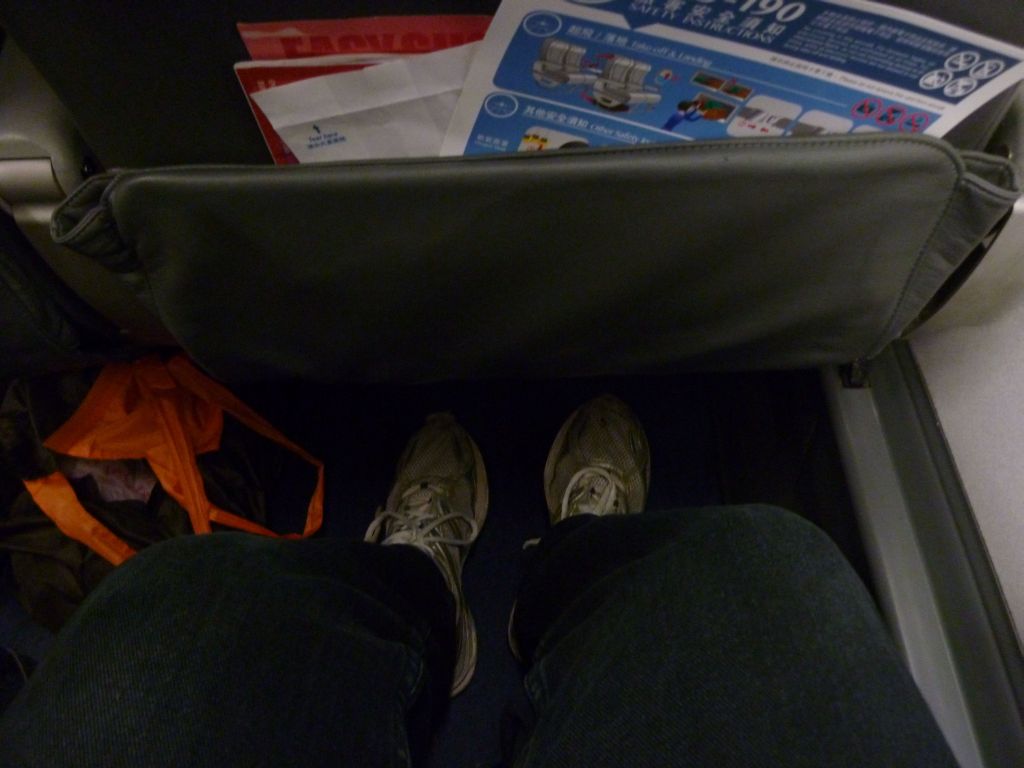 The FA earns a bonus in warning of turbulences in Mandarin, Taiwanese, Hakka and English, only that it took her so much time to say all that that the fasten seatbelts sign went off before she had finished the English version, which had the advantage not to delay the service. Mandarin offers orange juice, or oolong tea, or water or coffee. AE's coffee is awful, and their management probably does not read Flight Report: it never changed while I was there. I included the safety card to reduce the number of pictures. 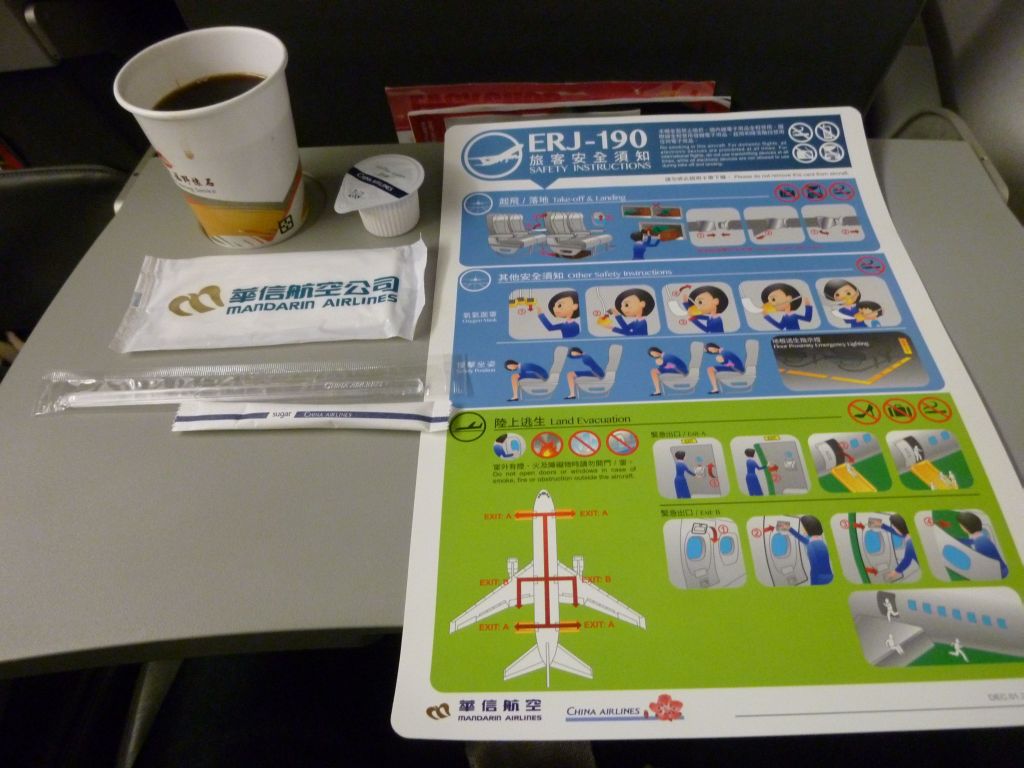 You may not recognize this view of the descent to Taipei, but you can see the huge Chongxin viaduct lit in blue, spanning a former branch of the Danshui river. You can also see the Zhongxing and Zhongxiao bridges, left and center, respectively.

Top level kiss landing on TSA's runway, five minutes early. I tried it all to take a picture of the winglet, but my small camera was not sensitive enough for night pictures.

This is the cabin once nearly all passengers had left: 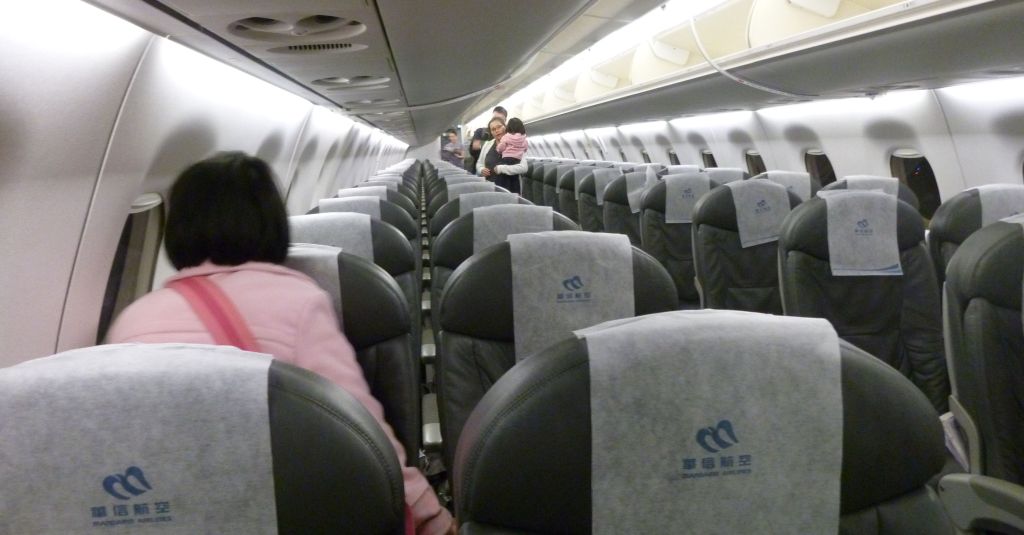 The airline magazine tells us that Mandarin's E-190s have 104 seats. The rows are numbered from 1 to 27, but there is no Row 13 to please foreigners. I am not superstitious and Mandarin Airlines does not get a bonus from that.

And at a neighboring Uni Air MD-90. Note that the Ferris wheel in Neihu changed colors between the two pictures.

The next direct bus to my home was a quarter of an hour later, so this time I took the subway. At Zhongxiao Fuxing station, the escalators plunge vertiginously from the Wenhu line (in viaduct) to the underground Tucheng line. There is nobody on the left, reserved to those who choose to walk down (or up) rather than waiting until they have reached the end. 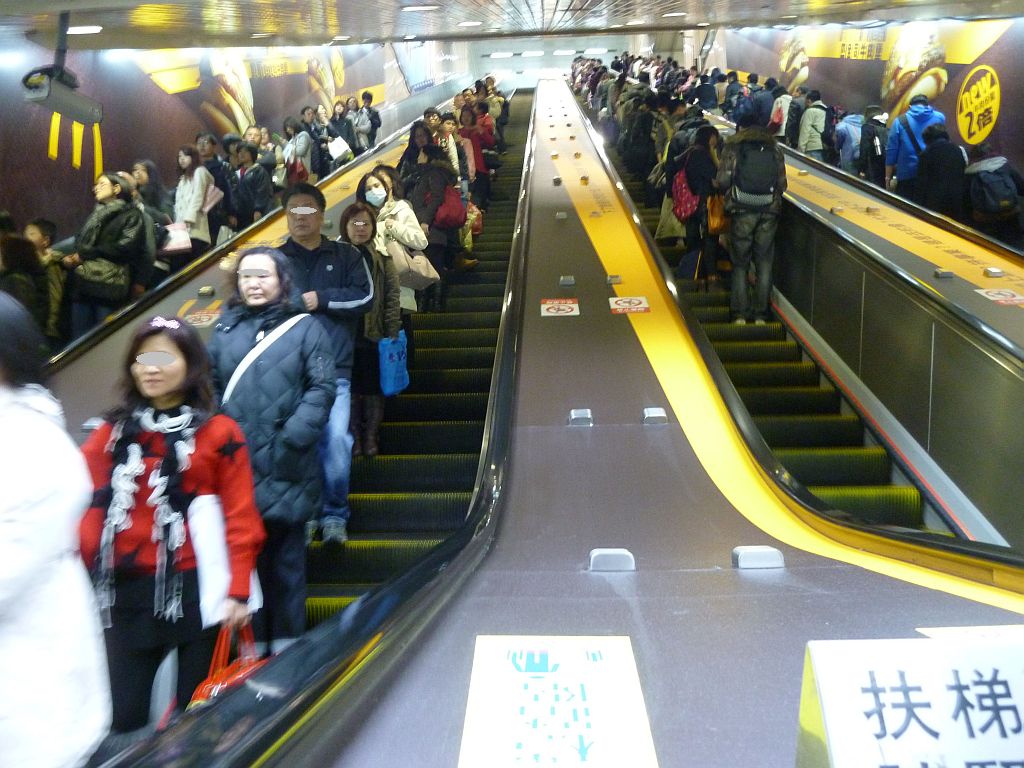 In a similar manner, no Taiwan citizen or supporter would have the incivility of taking a priority seat if (s)he does not belong to the usual priority categories (senior citizen, pregnant woman, etc..) 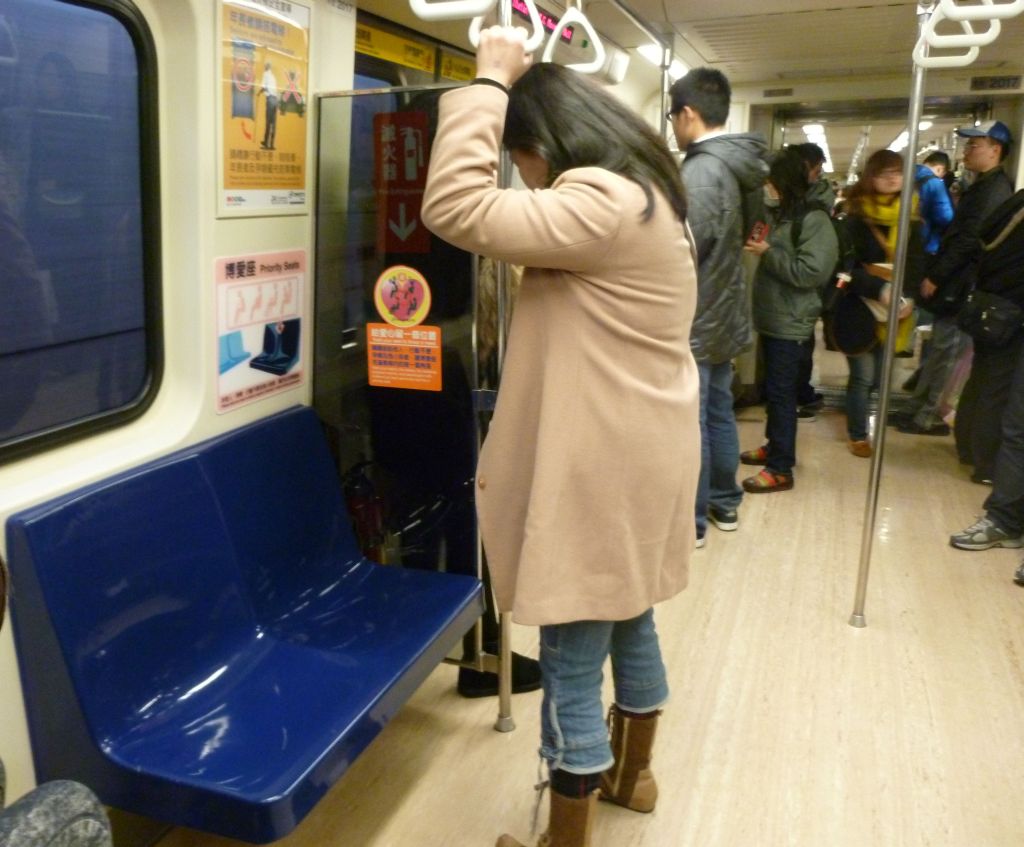 Well, actually, you can see now and then an undisciplined youth, but quite seldom.
See more

There was nothing wrong about Mandarin Airlines on that flight (apart from their coffee). The high speed train was nevertheless much more convenient, and I never flew on this line again.