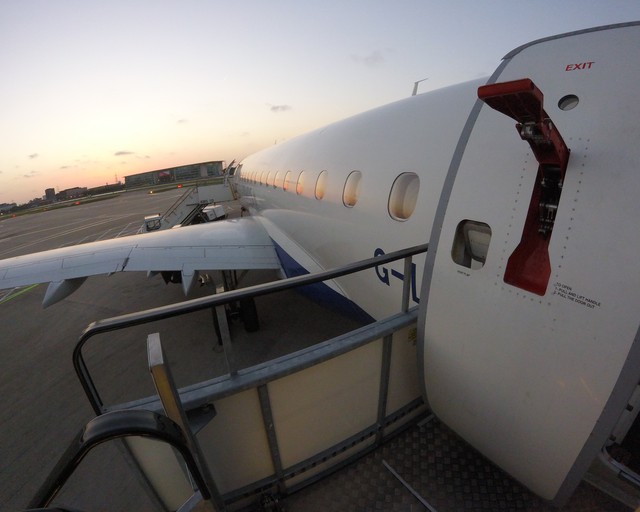 #49 out of 74 Airlines A minimum of 10 flight-reports within the past two years is required to appear in the rankings. 889 reviews

I arrived into Glasgow Airport on one of many FIRST 500 Glasgow Shuttle buses that run from the Airport into the city and back.

I had bought a ticket for £12 the previous day on arriving to the Airport, and I had up to 28 days to use the return journey. Making this one of the best public transport offers available in the UK for a Airport-City service. 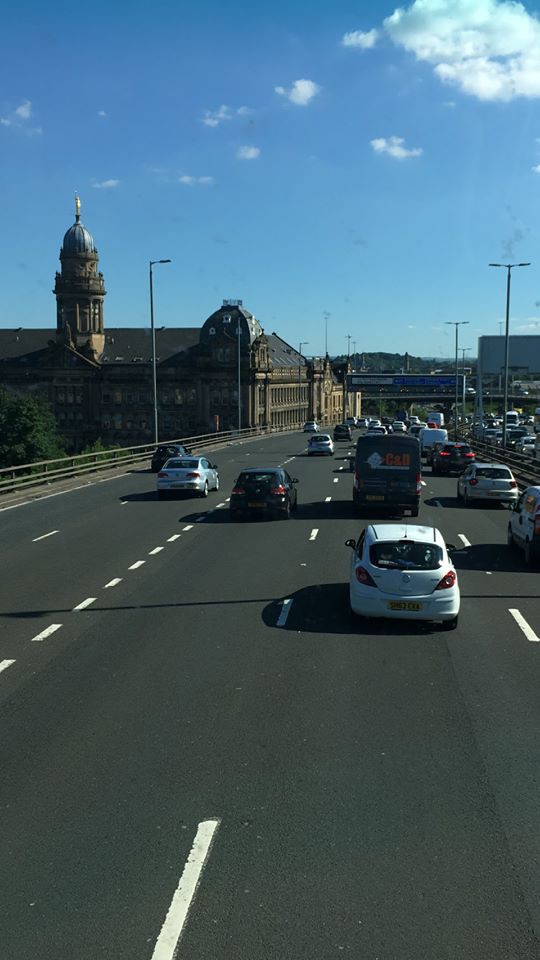 I managed to get a seat on the upper deck in the seat right by the front of the bus, giving me an all around view of where I was travelling to! 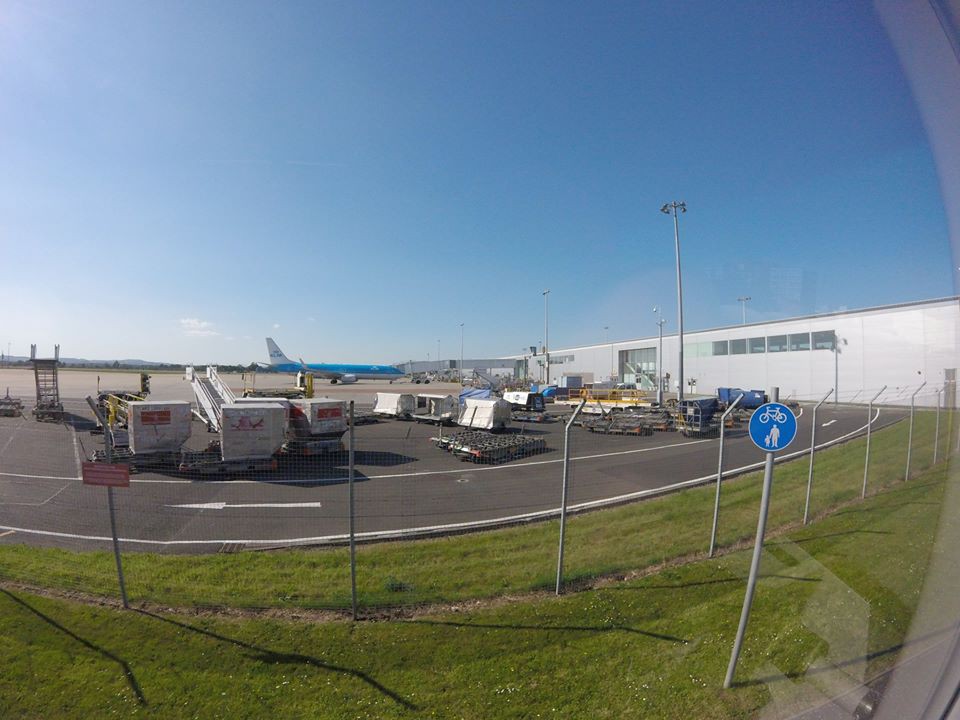 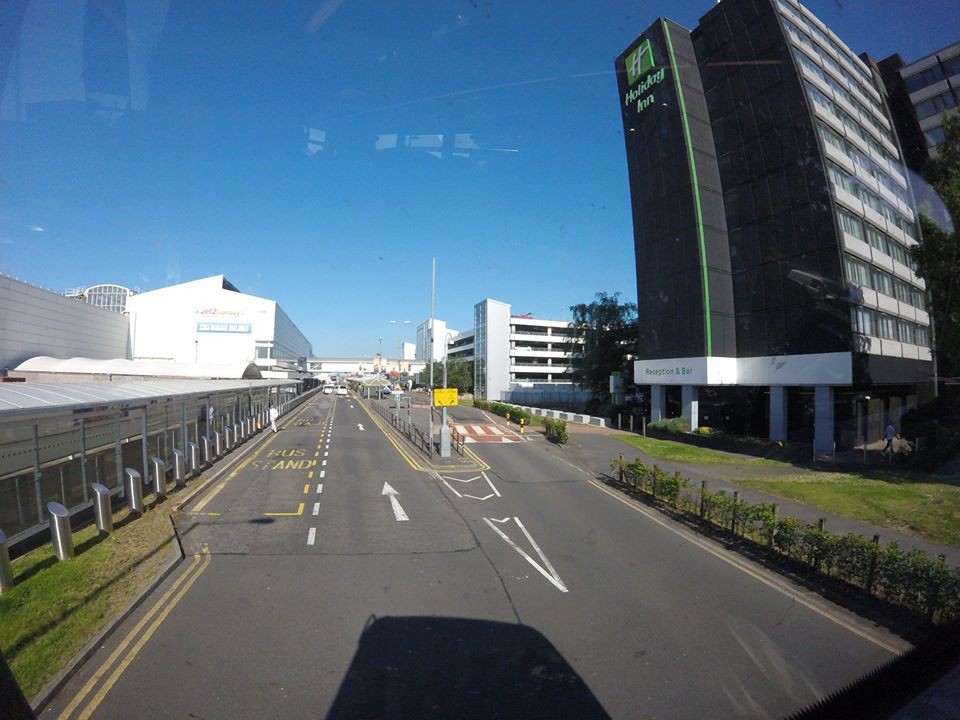 I arrived at GLA about 3 hours ahead of my flight. I had checked in online earlier in the day, so I made my way airside through the security check point. At the time my FLIO App offered me 15% off a dinner at the Airport Frankie and Bennie's- so I enjoyed dinner there after a long day exploring Glasgow. 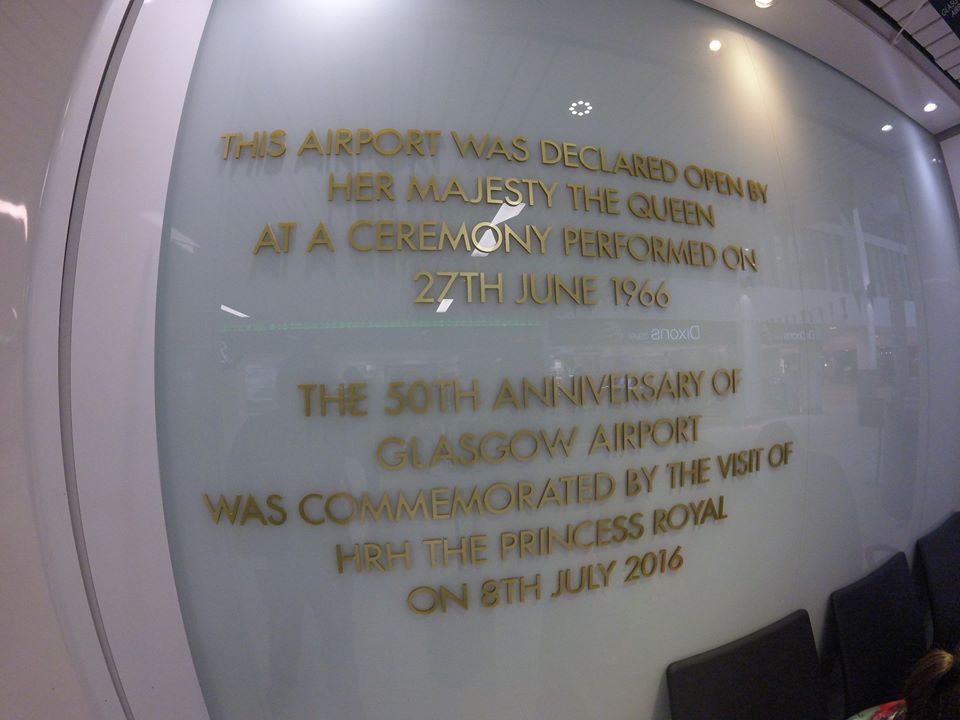 I had to eventually leave for the BA Gates in the Airport. So I walked on over, I had booked to fly into London City on the Embraer fleet, I fancied a day in London rather than coming straight home, so this would lead to a day in London before taking a coach to the south. Also a ride on the E-jets meant free bar service and the possibility of taking a cheeky free alcoholic beverage with me, have you seen London prices! 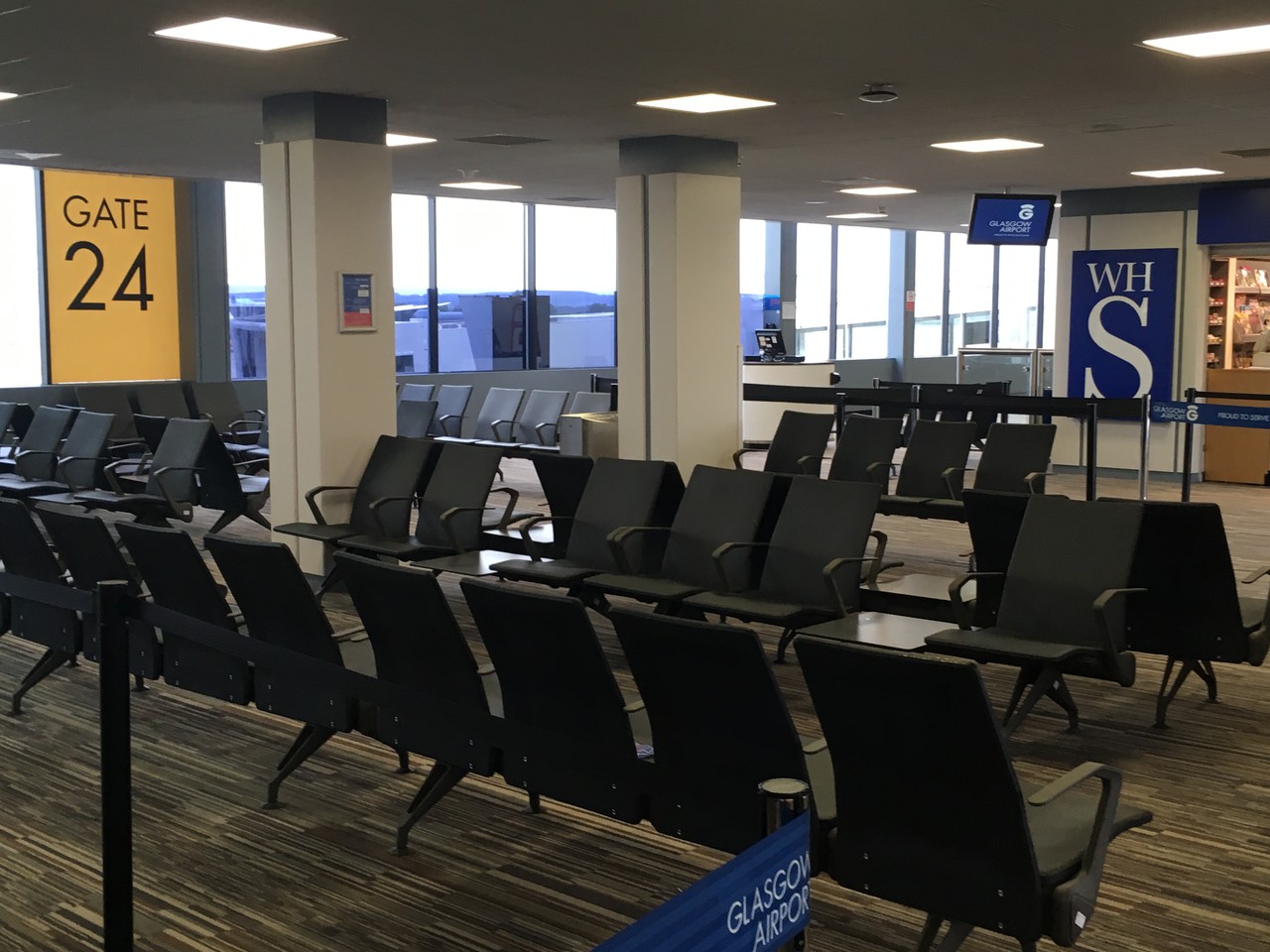 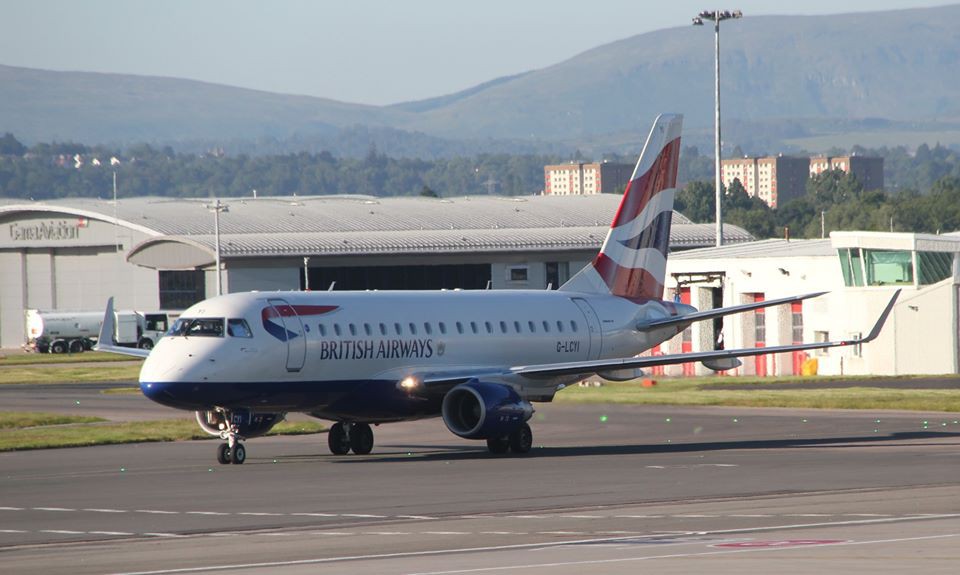 Sure enough my flight showed up and it was to be operated by the BA Cityflyer E-170 G-LCYI, a 9 year old aircraft delivered brand new from Embraer to replace the then out-going Avro RJ100 fleet. European Air Travel is mainly dominated by Airbus A320 and Boeing 737 aircraft, so this was something of a treat for me!

Now this is how a good BA experience should be done- take note Alex Cruz! 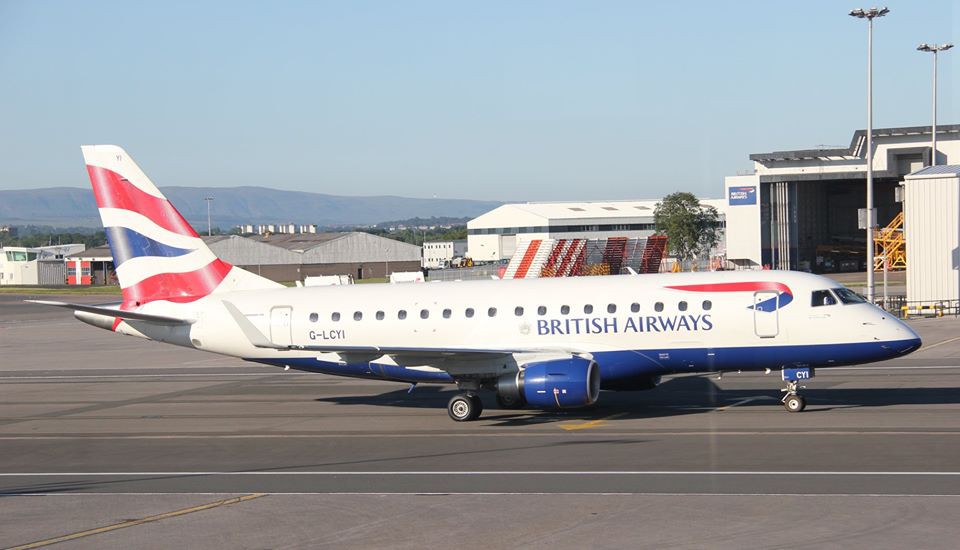 G-LCYI was my Embraer E-170 operating tonight's BA Shuttle down to London City. This aircraft was delivered in early 2010 to BA Cityflyer, it has operated from its LCY base for its entire service life, and during the Covid-19 pandemic was stored at Edinburgh from March 22nd 2020 to July 21st 2020, it is now back in back in service for BA Cityflyer. 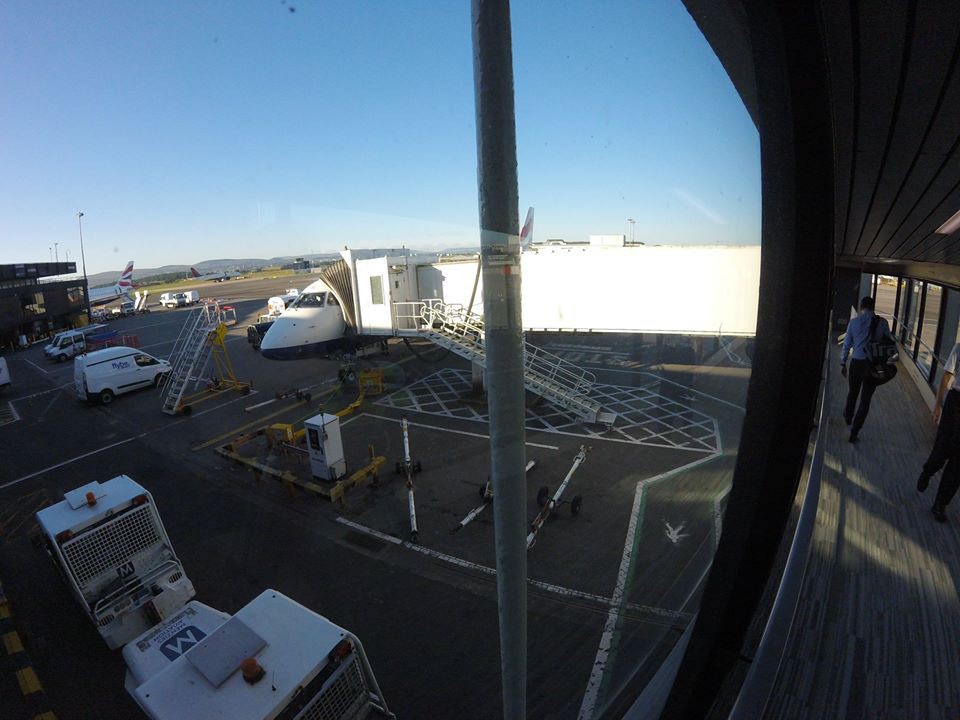 After letting off the in-bound passengers to Glasgow, we had a few minutes wait before they began calling in the boarding groups.

I was in Group 3, there wasn't many people from the first two groups, so I got on pretty sharp. As there were a lot of Groups 4 and 5, I asked for a short visit to the flight deck before we left as I was seated towards the rear half of this aircraft. 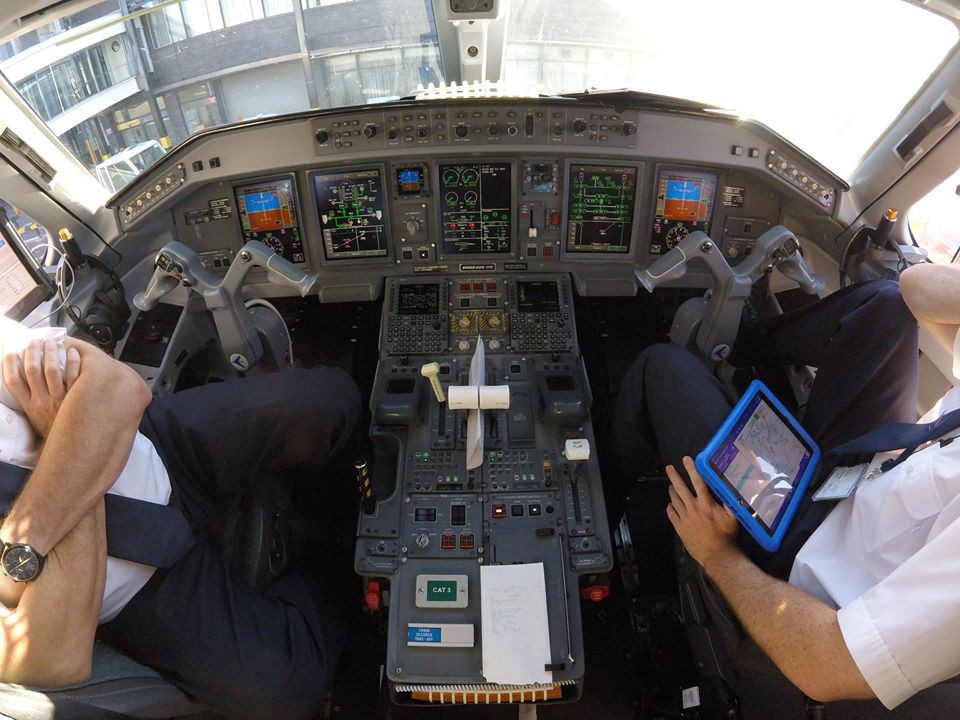 This is my second flight on the BA Cityflyer E-170, but my third time flying on BA Cityflyer. All three reports can be found on my page on this site.

I took my seat for the evening's flight, sat over the end of the wing, allowing for a good view around plus the "workings" of the flaps! 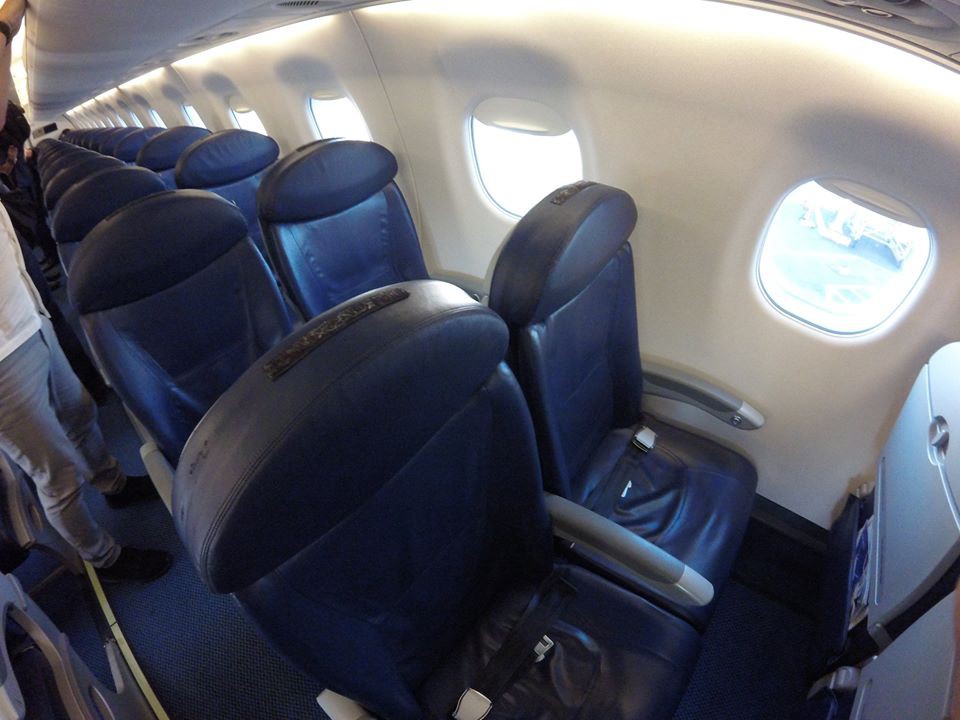 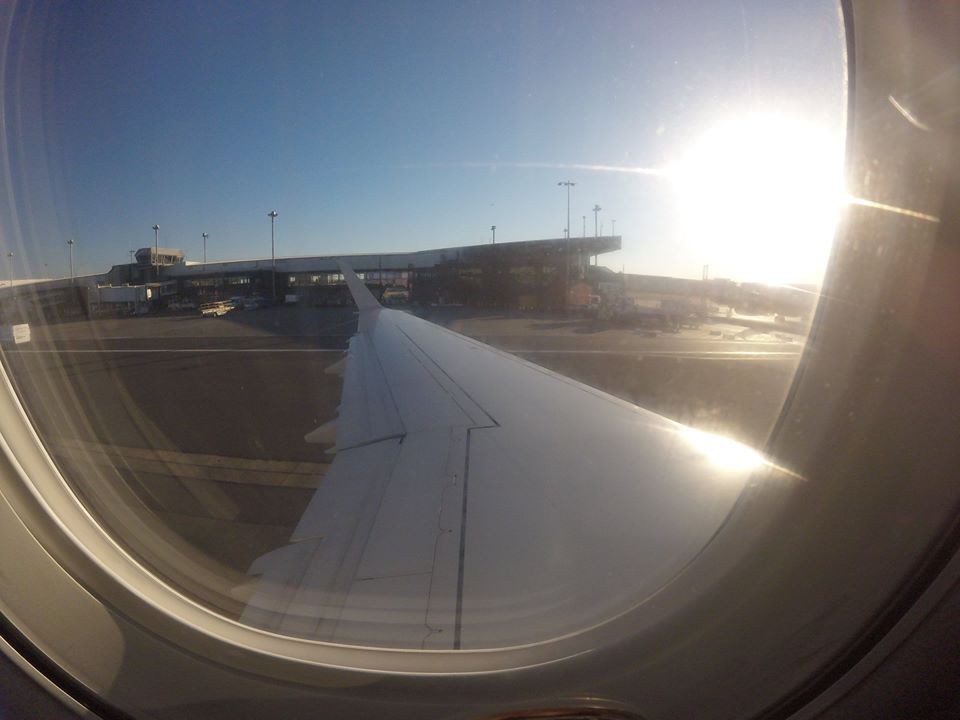 Our push back and taxi went uneventfully and we were soon powering out of Glasgow International and on wards towards London!

I find evening flights quite scenic, the sunset really can add to the ambiance! 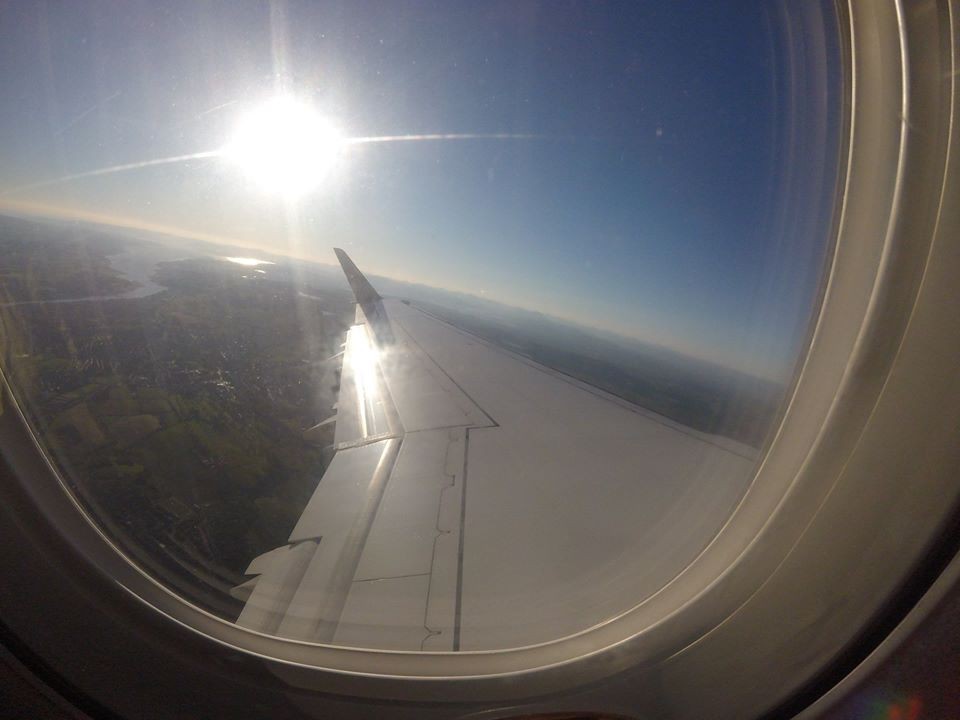 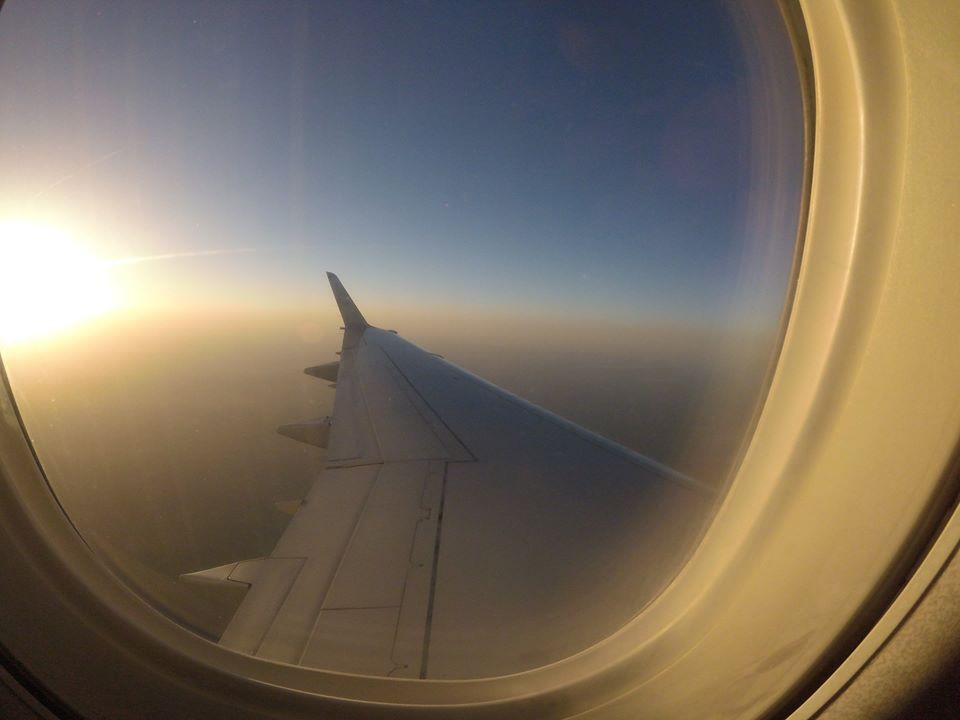 As we cruised along this short flight, the crew performed the bar service, which as of 2020 is still standard on BA Cityflyer flights. They haven't adopted the M&S Buy on Board, I had the corkers crisps along with a can of cola with a gin & tonic, asking for two tonics- taking one with me to my hotel that evening… naughty, I know! 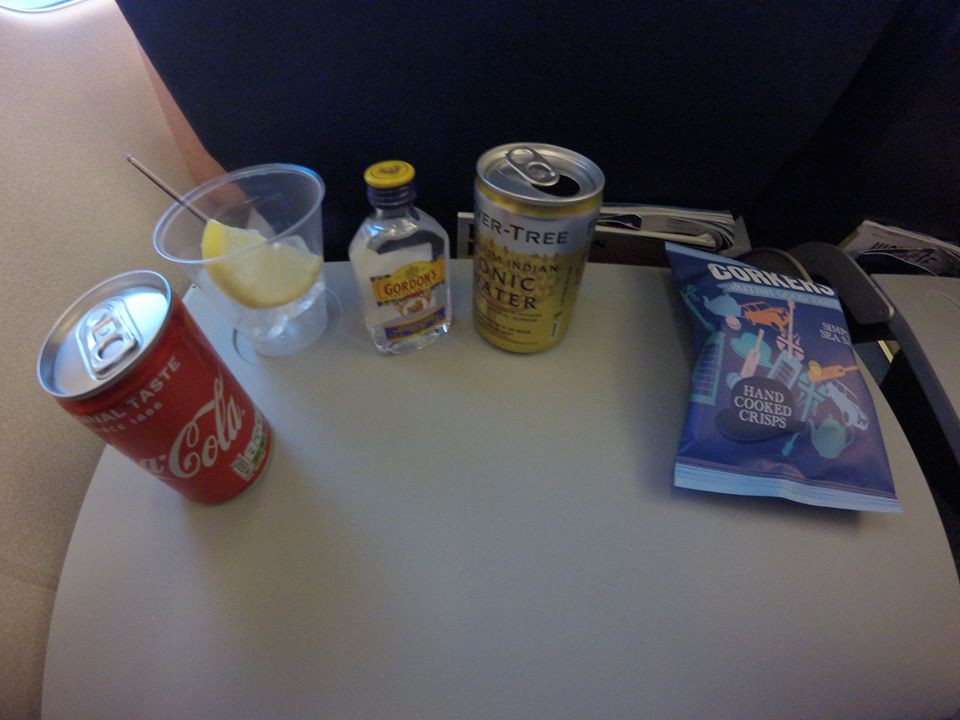 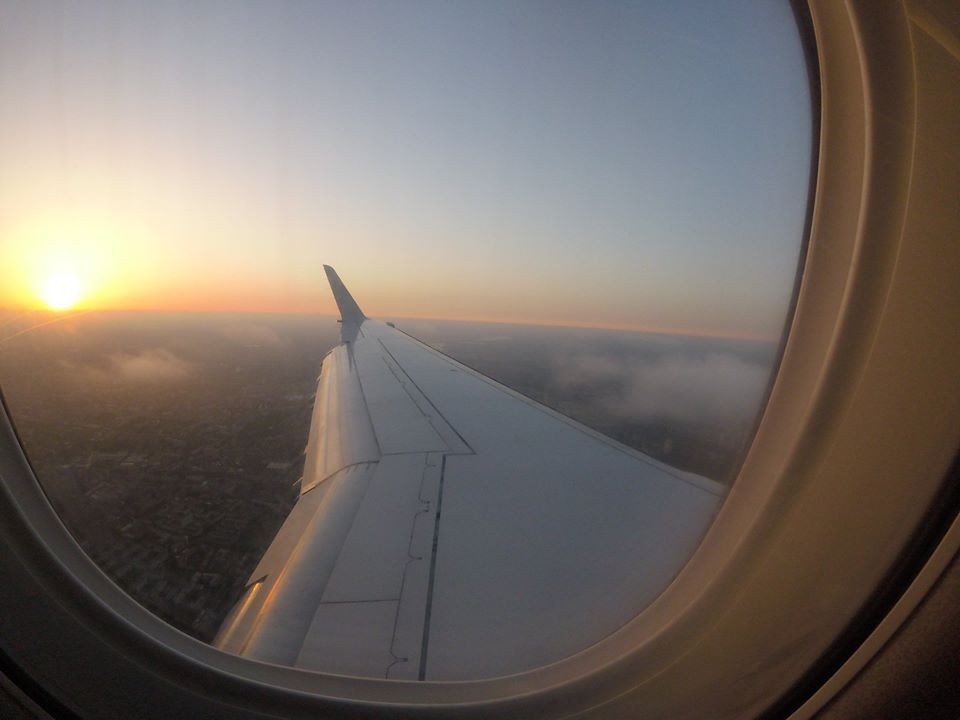 We flew over North-East London before coming into LCY over the Thames and docklands. A pretty standard arrival for an everyday Shuttle between two of the UK's most iconic cities!

The evening sunset adding a lovely touch to the arrival and view as we arrived into the small docklands airport. 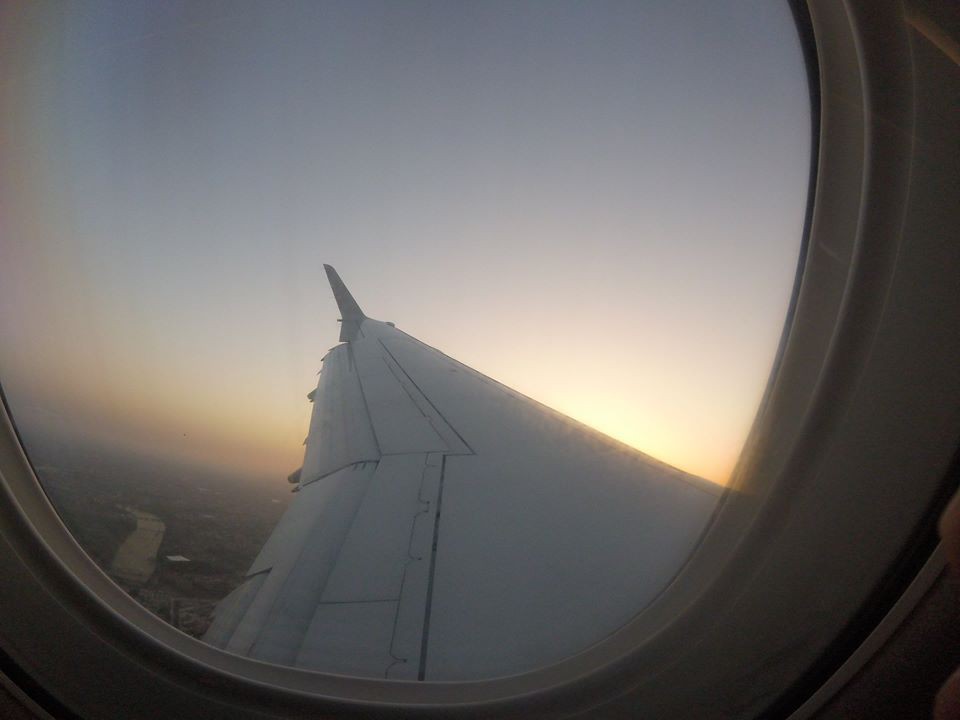 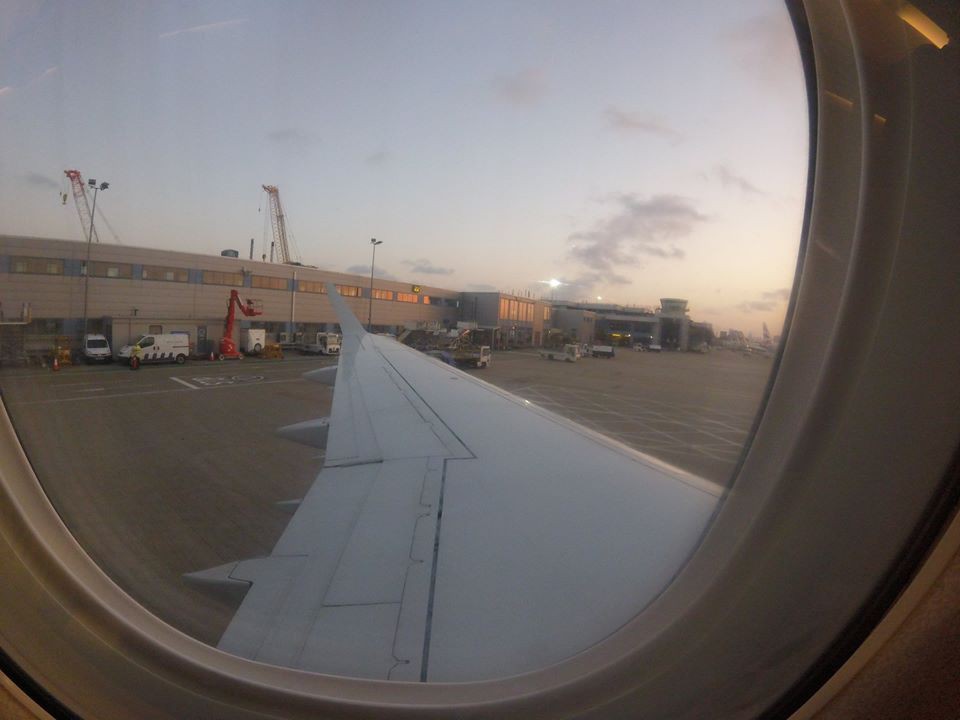 After awaiting most the other passengers to leave the cabin, I thanked the cabin crew for a great flight, ending an amazing trip, and as I left I quickly grabbed some pictures of the Embraer E-170 as I exited.

Its one of my personal favourite parts of the open board/disembarkation! 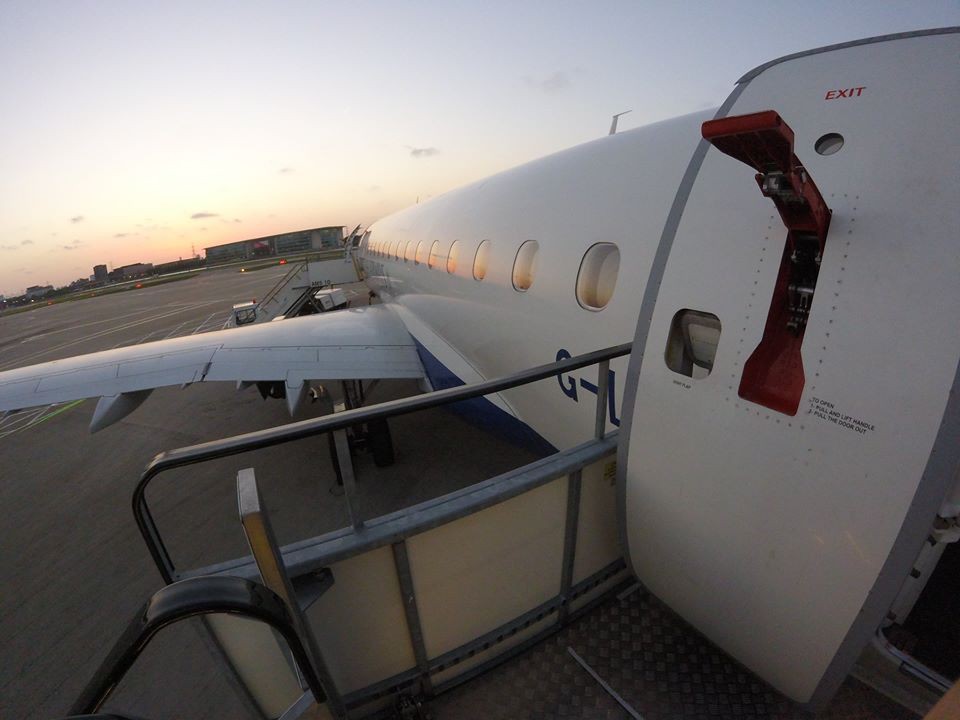 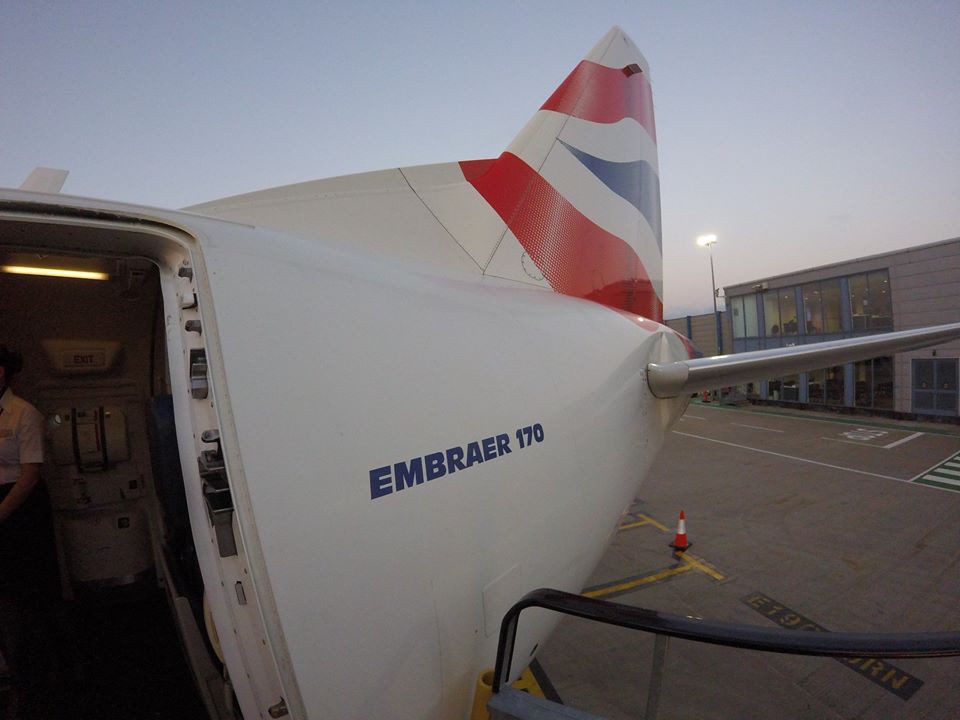 Though an uneventful flight, it was amazing to get a ride on the BA Cityflyer E-jet after a number of A320 flights that year.

Glasgow was pretty good for a major UK Airport and the Terminal felt modern, clean and easy to navigate.

The contributors of Flight-Report published 3 reviews of 2 airlines on the route Glasgow (GLA) → London (LCY).

The airline with the best average rating is BA Cityflyer with 7.6/10.