By marathon SILVER 3298
Published on 29th September 2013
If you liked Beigan (MFK), you will love Kinmen (KNH), which was the purpose of this day trip. When you zoomed to maximum magnification on the map, you wondered: Is that part of Taiwan? 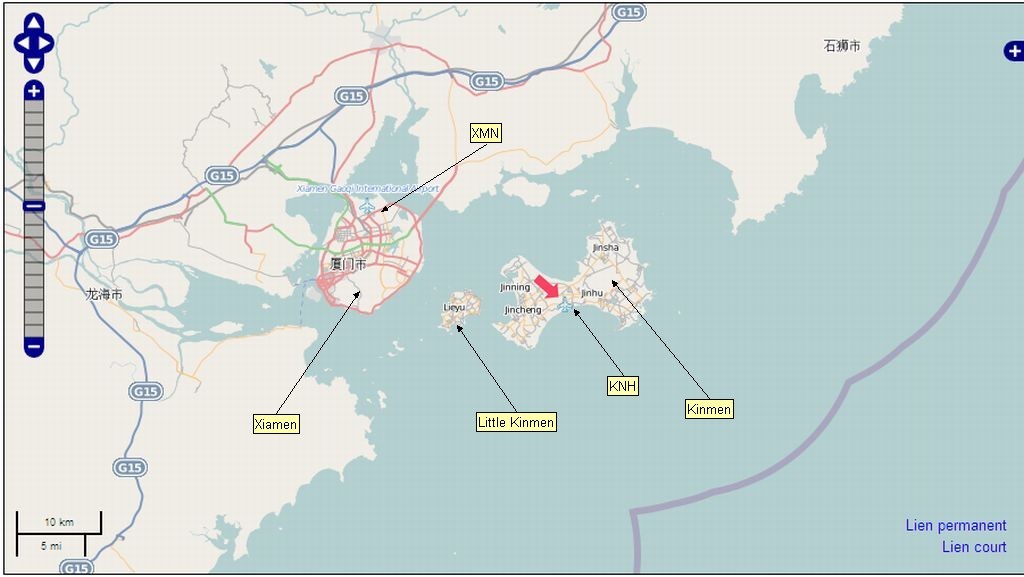 Even more so that like Beigan, OpenStreetMap displays Kinmen as being deep in Chinese territory, although there are some residual doubts. If you can read Chinese, you will also see that Kinmen's airport is also defined as being located in the municipality of Xiamen, Mainland China, which gave a good laugh to my Taiwanese colleagues.

I may disappoint some Chinese web fighters, but I only used my Taiwanese resident ID to go to Kinmen. 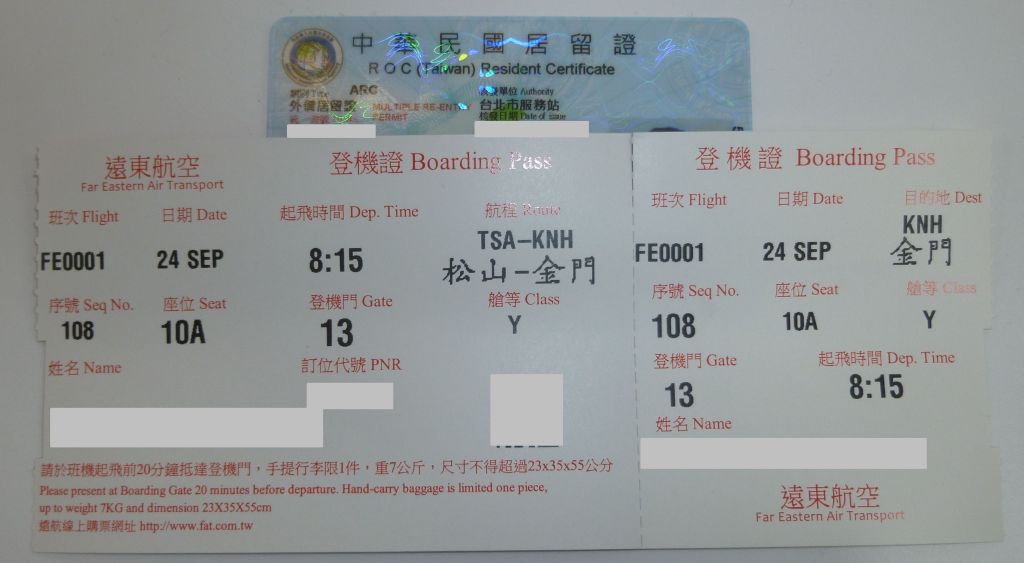 The least which can be said is that the Chinese strongly disapproved the idea that Taiwan retain control of this island locking Xiamen's access to the sea, and made it clear vigorously. The Taiwanese, on the other hand, clung desperately to Kinmen which was vital in their plan to regain control of the Mainland, fighting it out at a one-to-fifty ratio.

This Chinese MiG-15 which I found in a park of Yuliang, a small town in the Chinese province of Anhui, probably saw action over Kinmen and/or Korea. 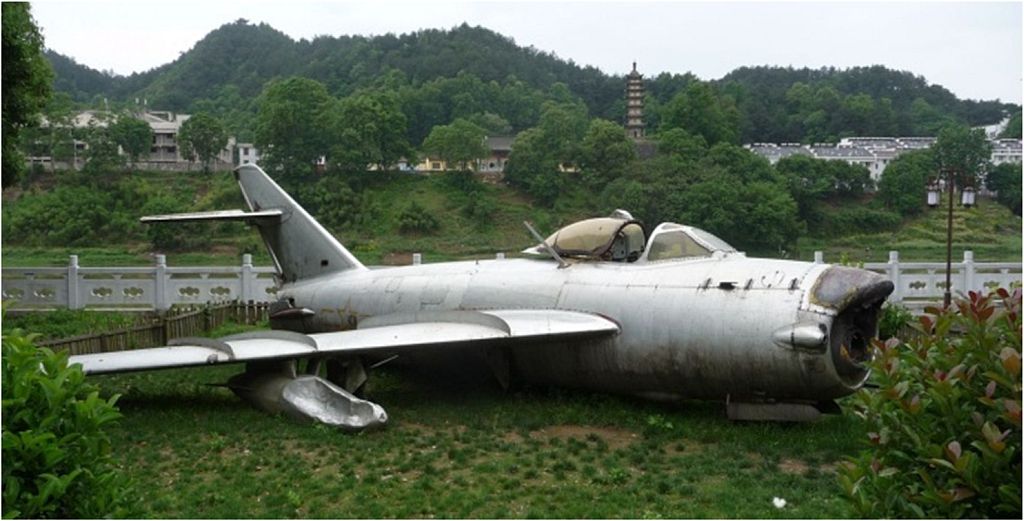 The apex came during the so-called battle of August 23rd, 1958 (the Battle of 823, in Taiwanese parlance), which actually lasted several months, with a crushing 31-1 score in the air in favor of Taiwan's F-86s versus China's MiG-17s, and on the sea with US Navy ships resupplying Kinmen in ammunition, and calling the bluff of the Chinese ships which blockaded the island. (China was resupplying Kinmen in ammunition, too, but it was often destroyed upon delivery. Always that shoddy Chinese quality…). On the sea, the Chinese did not dare stop the American ships: we forgot about it, but we have been one torpedo away from a US-Chinese naval battle, or possibly a full blown war between the two.

Some interesting pages of the history of aviation were written in the vicinity of Kinmen: a Chinese MiG-17 was the aircraft downed by a Sidewinder missile, fired by a Taiwanese F-86, but shortly thereafter, another MiG-17 brought home a quasi-intact Sidewinder which penetrated its fuselage without exploding, which allowed the Chinese to produce counterfeits, with total disregard to intellectual property rights, like for Louis Vuitton handbags nowadays. 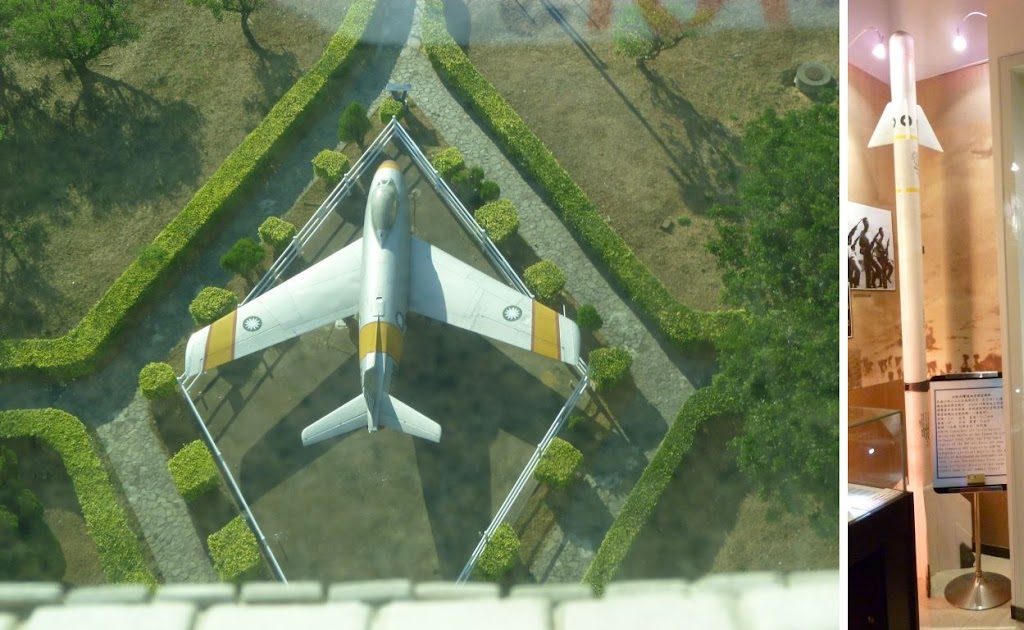 Later, both parties upgraded their F-86s to F-100s, and their MiG-17 to MiG-21s, without any convincing results in terms of territorial gains.

And then one day, China realized that they had an increasing number of factories making a living from subcontract jobs for Taiwan, that the US were really going to hold their promise to defend Taiwan no matter what (with periodic rows at each new military supply or upgrade contract), and that time had come for change. On both sides, the civil war generation was leaving power, which allowed the start of a difficult dialogue.

Also, few people know that the US made it a condition that China stops its bombings of Kinmen to shift its diplomatic ties from Taiwan to China.

It is now possible to visit Kinmen. It has even become a rather popular domestic tourist destination in Taiwan, with no fewer than four domestic airlines serving the TSA-KNH route, totaling an average one flight every half hour.

It is like having four rivaling airlines serving the Channel Islands from London. The difference is that there are flights from Paris to Jersey, but there are no flights from anywhere in Mainland China to Kinmen. Chinese shells have stopped landing on Kinmen, but Chinese planes have not started landing there.

Since Taiwan's domestic flights are sold one way, I managed to add one airport, two airlines and two aircraft types to my list in a single day.

Flight number 001 of any airline is usually a prestigious line. I missed boarding Flight AF001 when it existed (Paris to New York on the Concorde), and I chose flight FE001 as a fallback. That is what I call starting from the lowest rung of the aviation geek social ladder.

Far Eastern Transport Airlines' MD-83s had been gathering rust for three years on the tarmac of Songshan, Taipei's domestic airport, when I read in May that this company was struggling out of bankruptcy and resuming commercial operation.

FAT presently holds the dubious Taiwanese record of the ratio of number stored aircraft versus number of aircraft in operation: eight to four. Some should remain in storage for a while, because I have some misgivings about the motorization of some of them. FAT is also at the top of the Taiwanese charts of crashes vs. operated aircraft.

So, FAT now operates four MD-83, like this one on final approach at Songshan, which happens to be the one I boarded. When you are struggling from bankruptcy, just any income is welcome, and this one bears publicity for Kinmen's alcohol (a local specialty, beyond the 100 proof mark). It is unclear if FAT was paid in kind to refuel this aircraft directly.

It was an ordinary week-end at TSA, but as usual, all flights were booked full. 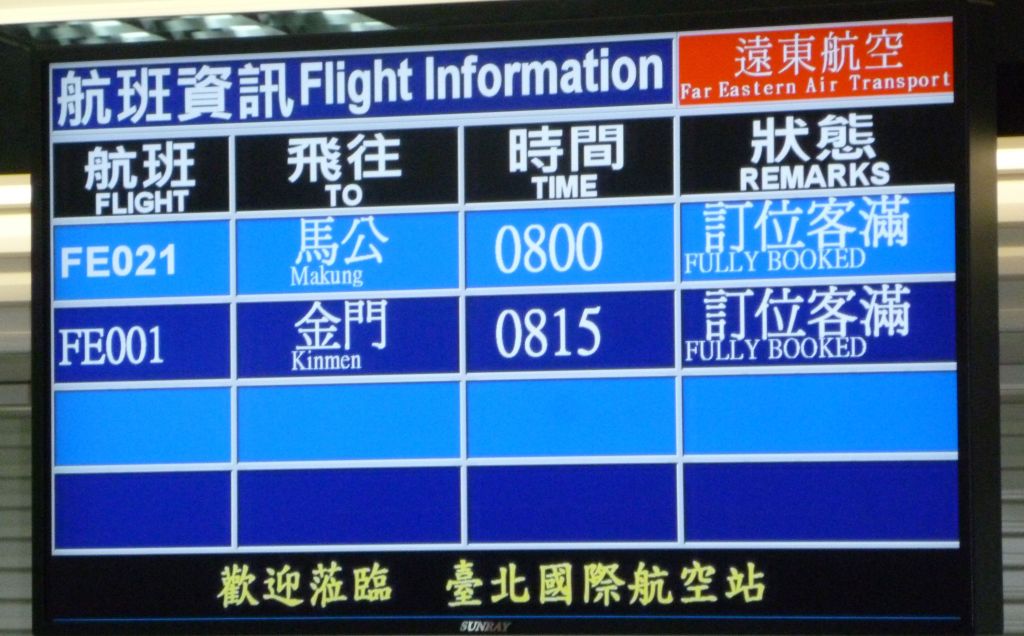 It was nevertheless not as crowded as last time, when it was a three day week-end.

When he saw a foreigner approach the small line at the check-in counter, and employee rushed to ask where I was going. He was reassured to realize that a/ I was going to Kinmen, and b/ I answered in Chinese, which hinted that I was not lost. In how many airports would an employee, like this one with a necktie in the background, come to help an obviously foreign traveler? 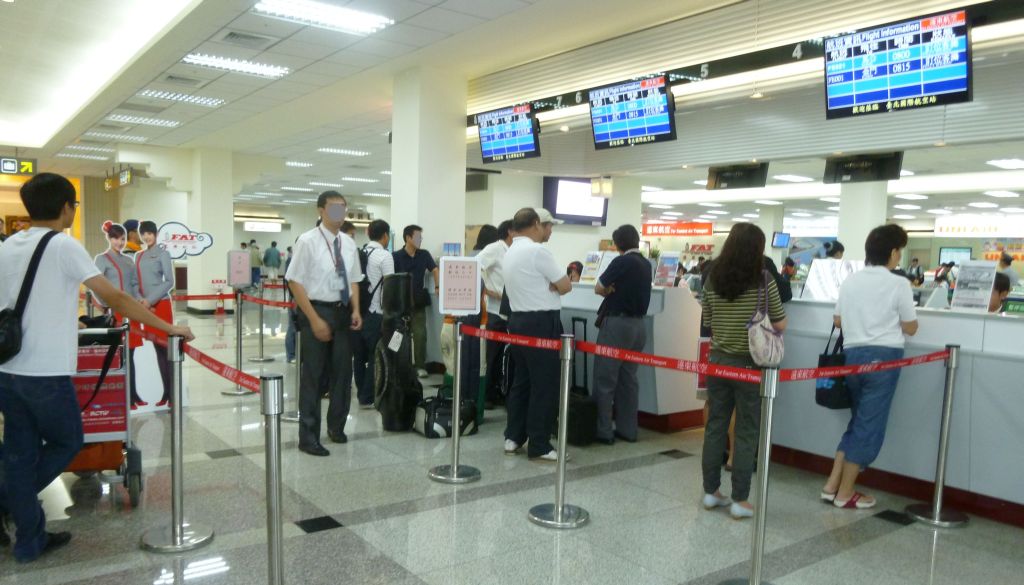 Contrary to last time when I flew to Beigan, check-in was very quick; the employee only asked me if I wanted a window or aisle seat. There are four gates at ground level, for passenger bus transfers, one per airline, but Mandarin Airlines E-190s are actually parked pier-side, and boarding is from the first floor where there are three jetbridges for domestic flights.

One of its twins pier-side.

Some plane spotting: a Uni-Air MD-90 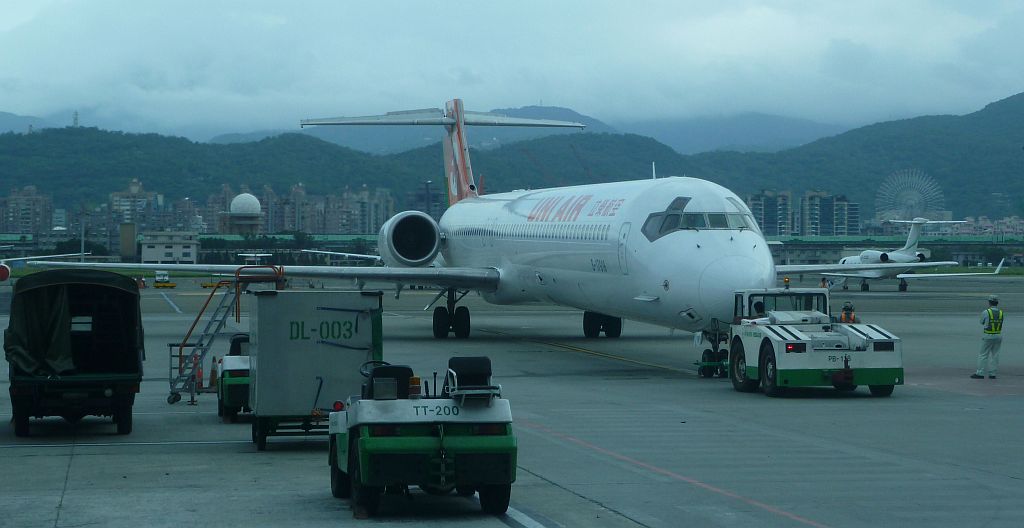 FAT's MD83 are in a sorry shape: I have doubts about the airworthiness of this one:

Don't count on this one for a long distance call, despite its advertising for a local telecom operator: it has not moved an inch for months. In the background, you can see the iconic Tower Taipei 101.

Transasia Airways A321, in front of the iconic Taipei 101 tower.

The guides of a group of senior citizens flying with me are busy. Kinmen is obviously not their final destination, because they all hold a grayish green Taiwanese passport: this group is going to take the ferry to Xiamen in Mainland China. This is typically 30% cheaper than direct flights, or connecting in Hong-Kong, but takes more time, a commodity that retirees have an ample supply of. 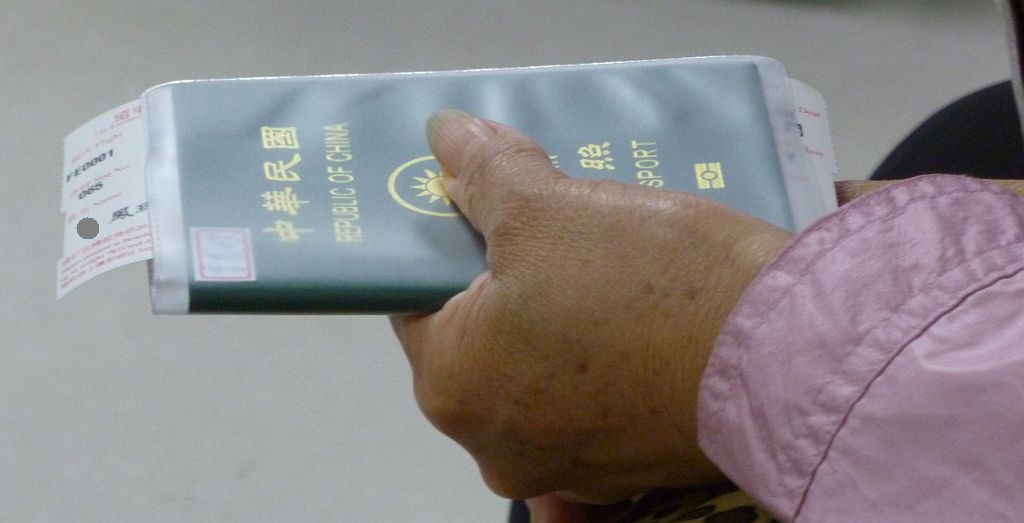 The crew boards first; note the shoes and the knot in the air assorted to the skirt (and also to the tail of the aircraft) of the air stewardesses. 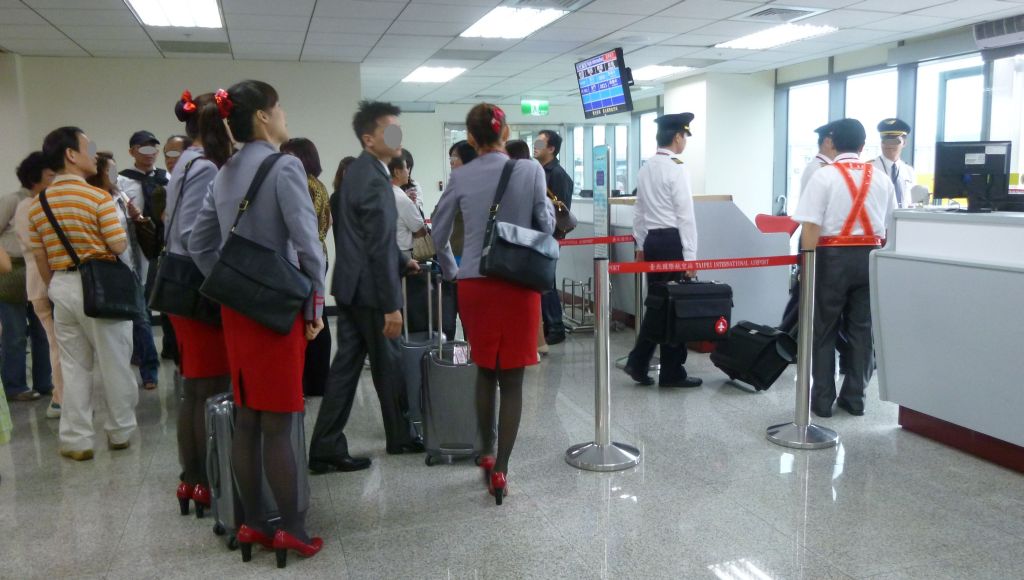 An MD-83 could be at one of the boarding gates, like the MD90, A321 and E-190 of its competitors, but the charge for a gangway is higher than that for a bus, and FAT cannot afford it. 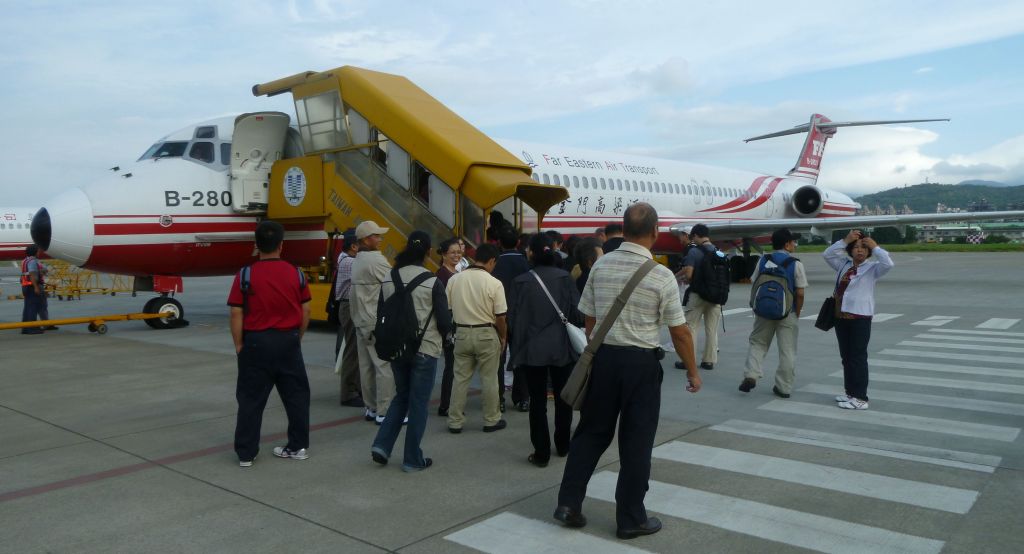 FAT is actually willing to sell advertising space on its aircraft to just anybody. Look at that MD-83 in the background.

How many airlines would advertise for a totally unrelated airline on its own aircraft? (TonleSap Airlines is from Cambodia and to date operates a single B737.)

I do not forget to check that this is indeed an MD-83 – I am a disaster when it comes to identifying an aircraft. 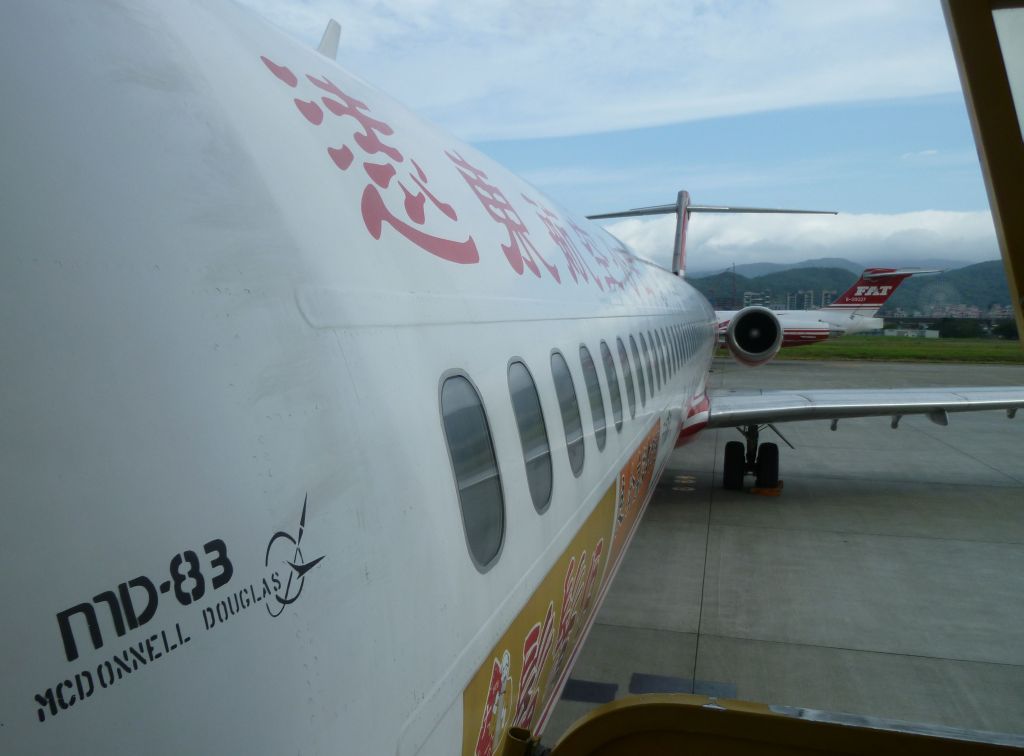 And I discover two business class rows in 2+2 seating, 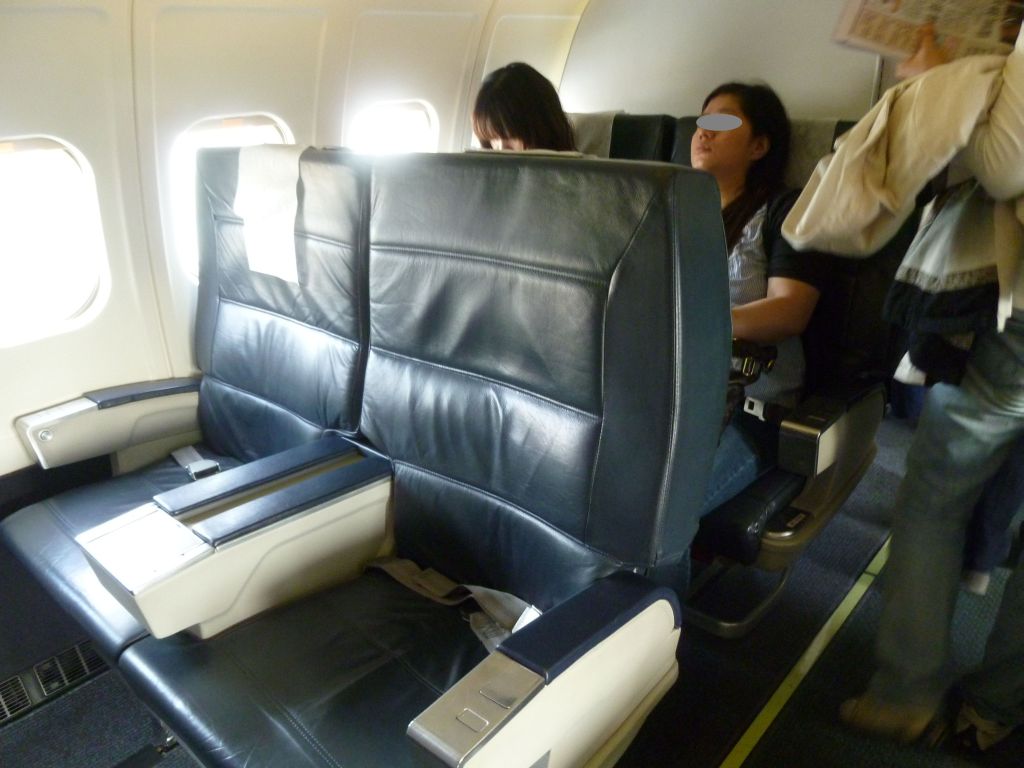 and the rest of the cabin in 2+3 layout, with a quite generous seat pitch. The seats symbolically incline half a seatback depth. 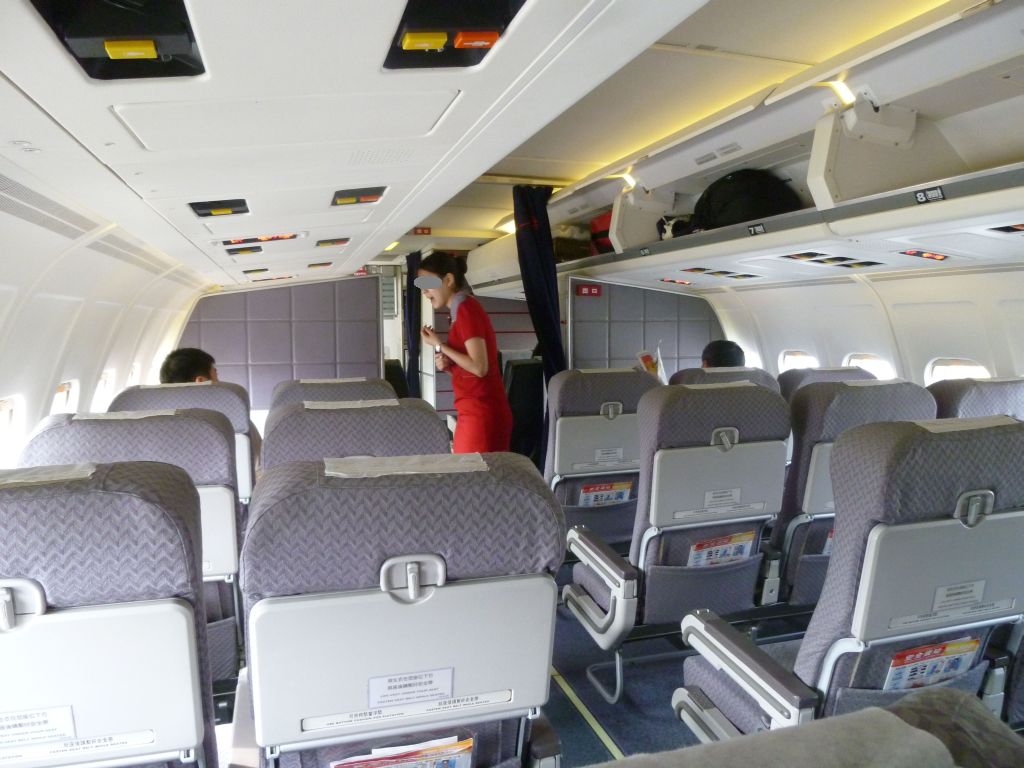 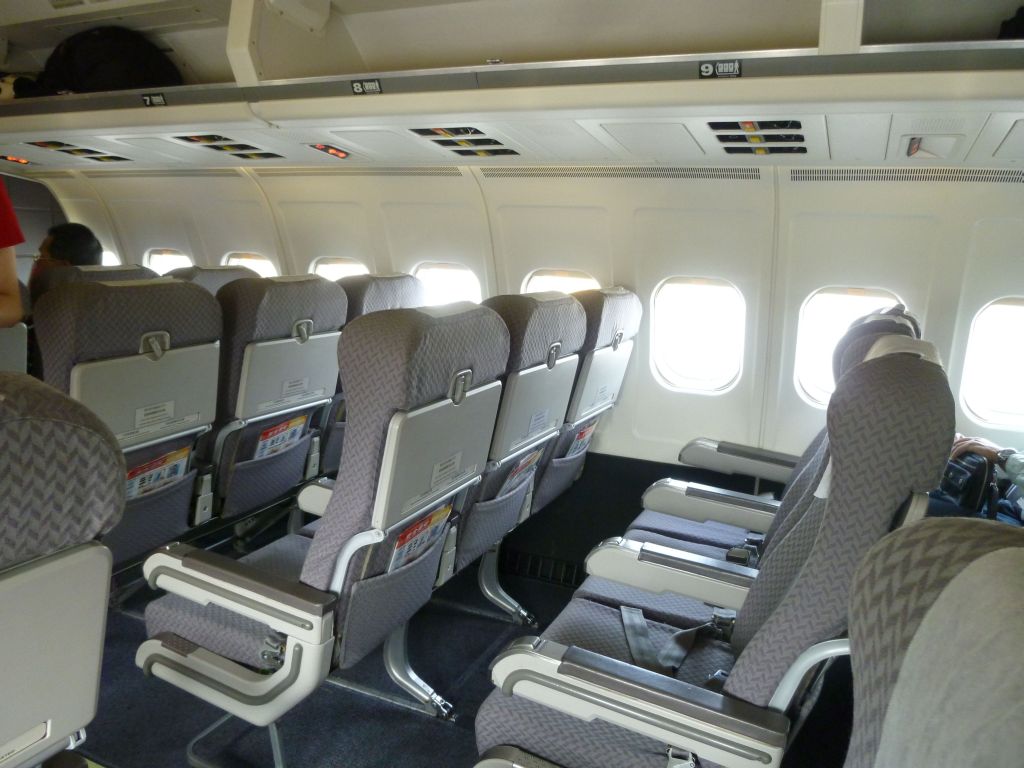 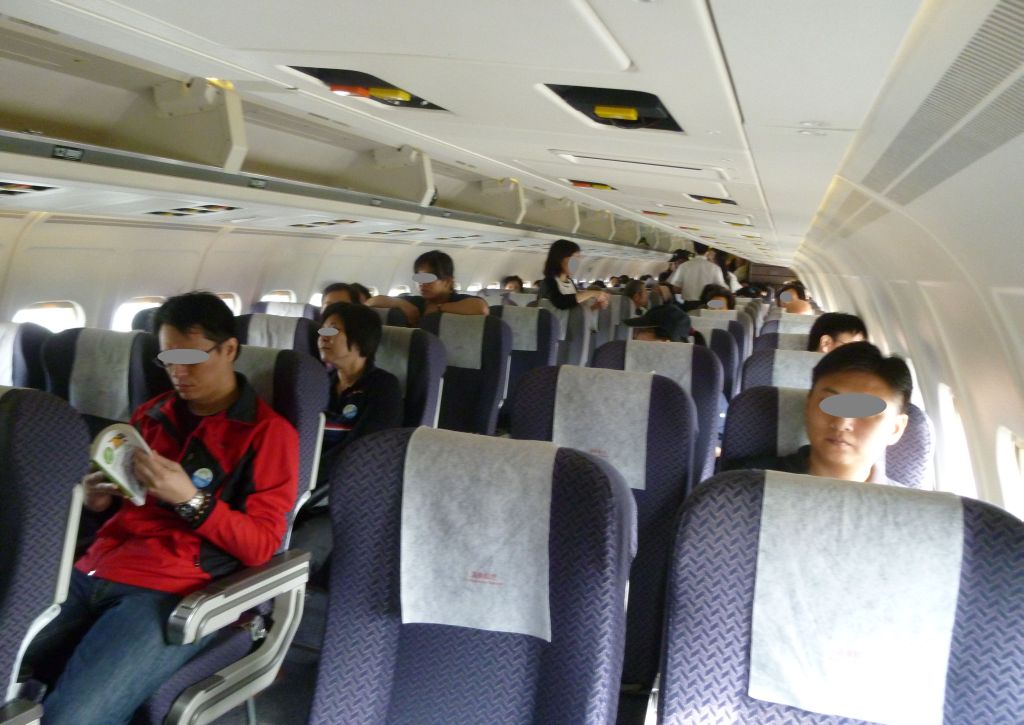 The ground staff displays the banner attached to the front wheel pin (which allows the tractor to guide the aircraft during pushback), and waves to the crew and passengers, apparently a standard procedure in Taiwan that I also saw on the way back. The silence during takeoff is impressive, a feature of an aircraft with rear engines… when you are seated towards the front. Note the JAL B767 in the background, bound for Tokyo's Haneda domestic airport. 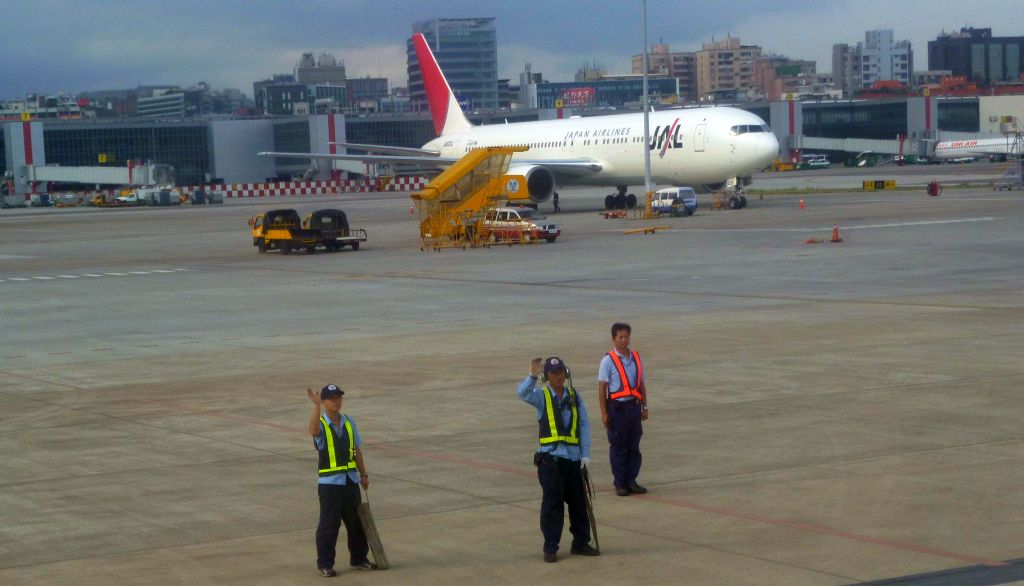 Safety announcements were in Mandarin with a decent English language abstract. The sound on the P.A. from the cockpit was very poor, and I did not catch anything about what the pilot said. At take-off, due to the reactors being in the rear, the MD-83 is one of the quietest planes I ever flew in, at least if you are seated in the front rows.

Like on the previous domestic flights, using any electronic device during the flight is prohibited; it is actually a Taiwanese Civil aviation authority regulation. A flight attendant courteously reminded me that as I took one picture too many when taxiing. No regret about this flight which was between two cloud layers and with adverse lighting conditions.

The flight is between two layers of clouds, and the sun is in the wrong direction. This could be Mount Yushan (3,952m), that the Taiwanese are very proud to be higher than Mount Fuji (3,776m), the highest mountain in Japan which was their colonial ruler. Apart from the physical effort due to the altitude gain, climbing to the top of Yushan is not technically difficult, so much so that a climbing permit system is in place to avoid having crowds damage the fragile environment.

As far as the on board service is concerned, it is minimal like on all Taiwanese domestic routes. The coffee has apparently been bought from the same supplier that SEMPO (our customer) selected, in order to get the message across that there is no bribery attempt: it is really awful. Mandarin Airlines appears to have struck a non-competition deal on this matter, too.

No geomap of course, but I followed the route partly with my compass: the plane first followed the western coast of Taiwan, until the estuary of the Choshui River, and then veered west-north-west towards Kinmen. The point is of course to avoid the Chinese airspace and reach Kinmen from a direction perpendicular to the Mainland's coastline: the Taiwanese airspace must be quite constrained in this area.

The MD-83 appeared somewhat warped after landing (actually, this is due to the merging of two pictures).

Actually, isn't there something wrong in that reactor? 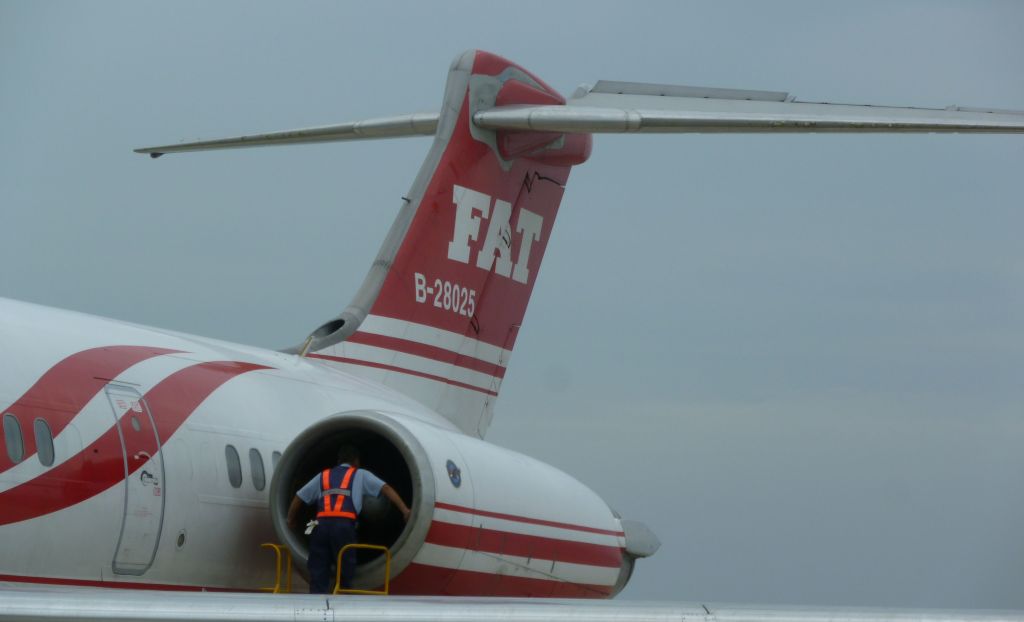 No, apparently, there was nothing abnormal. Note the passengers disembarking from the tail stairs too. 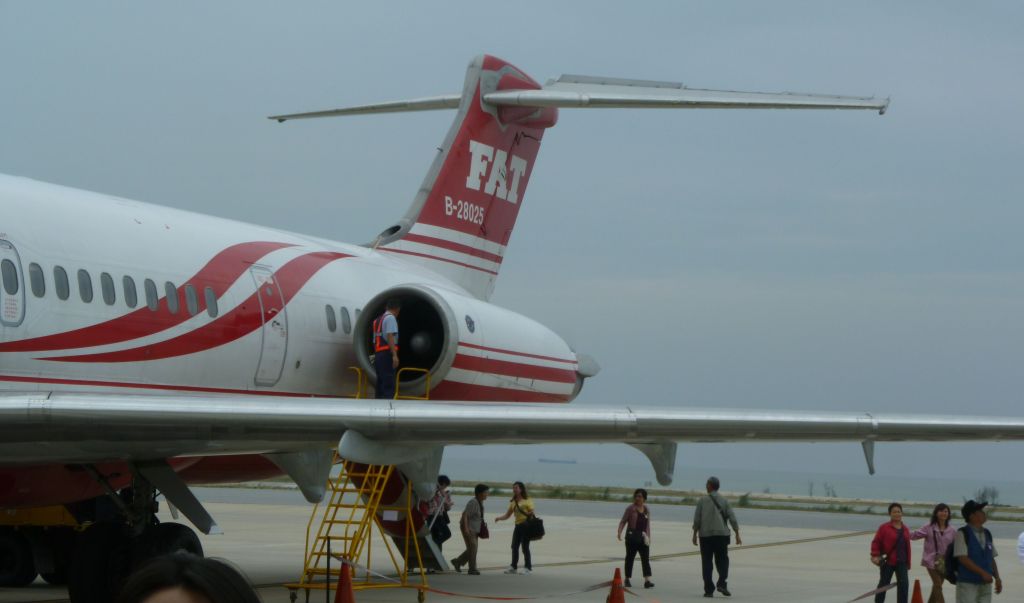 The trip was not over: the journey continued with a twin-aisle wide-body, with 4-6-4 seating:

… which was actually at the low end of its transport category.

Where to? that will be in return flight's FR.
See more

FAT's product is very decent, in the domestic Taiwanese flights context: on time, no problem with the flight attendants, a bonus for the proposed help and speed at check in. A bonus too for the silence of the aircraft, and the fact that the 2+3 seating has fewer middle seats than A321 in 3+3 layout. The meal is minimal, but you only have a couple cookies more on French domestic flights.

The contributors of Flight-Report published 11 reviews of 3 airlines on the route Taipei City (TSA) → Kinmen (KNH).