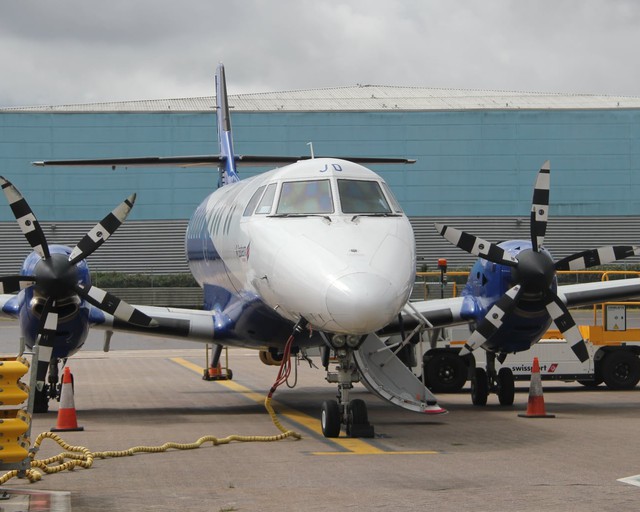 Welcome to another report, and this one is currently from my one of two trips I've done since Covid-19 hit Europe.

Due to various lock downs and travel restrictions, I've been pretty much grounded. Though this two day trip to Newcastle did happen in mid-August 2020.

First of all, I had booked with BA to make this trip, but I got a travel voucher as they cancelled various flights between LHR and NCL during the summer, going from 2 or 3 daily down to 3-4 weekly, making this trip impossible to do with them.

Flybe had been bankrupted into history for five months now, but two new airlines had stepped up quickly: Loganair and Eastern Airways!

Spending £145, I booked two return flights with a booking website, in order to get a flight on both airlines, who I before this trip hadn't flown before. So I was quite excited. This report (as you can see) will cover the out-bound flight on Eastern. 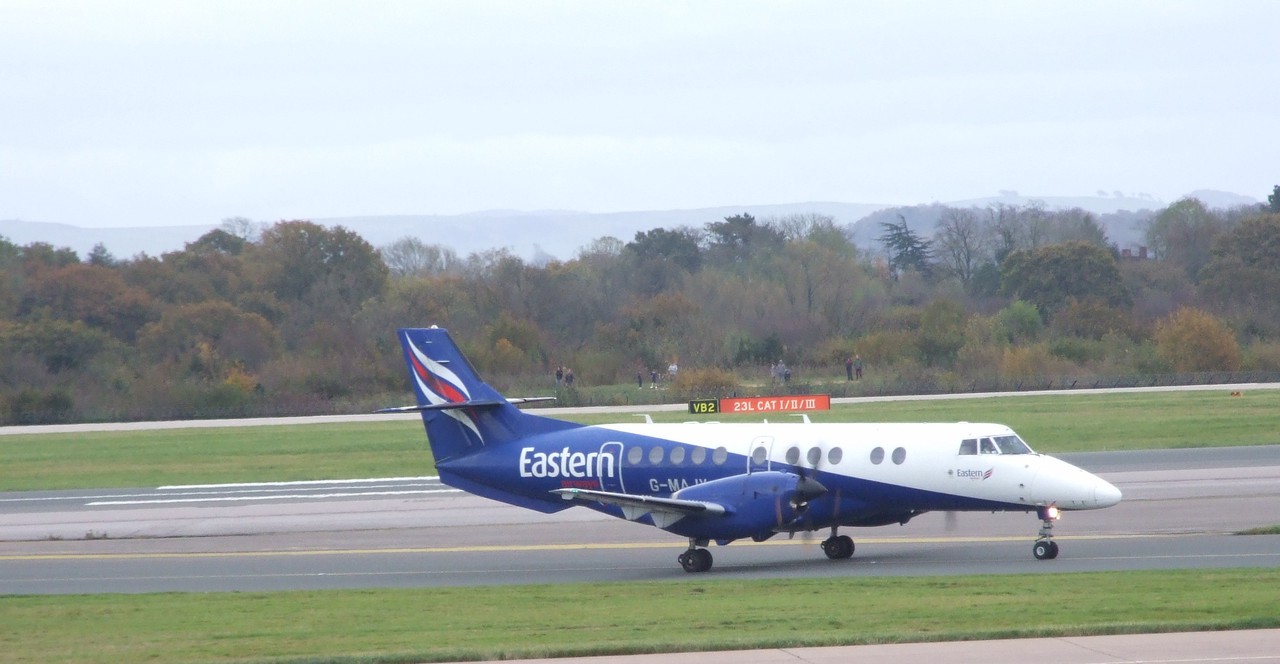 The outbound flight was to be operated by G-MAJD, a British Aerospace (BAe Systems) Jetstream 41.

Founded in 1997 as Air Kilroe with two BAe Jetstream 31, Eastern Airways has been providing regional services across the UK for over 20 years now. The airline's fleet of Jetstream (31 and 41) have been the mainstay over the year, but Embraer ERJ aircraft and ATR-72 are entering the fleet to cover post-Flybe expansion and other ventures. 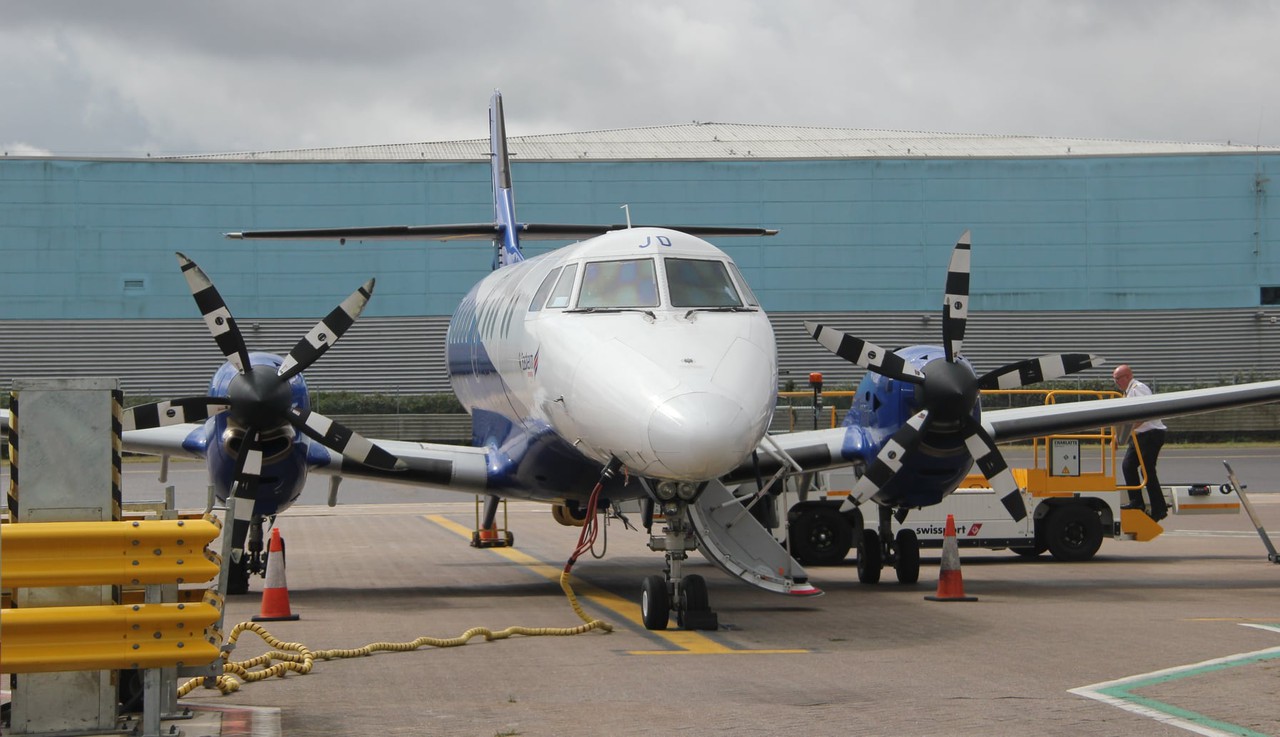 This aircraft, G-MAJD, was built in 1992. Making it older than both me and the airline it currently flies for!

The plane entered service in 1993 with Manx Airlines until it ended up with British Regional Airlines (later BA CitiExpress) until 2003, when it ended up with Eastern Airways, its current owner. The aircraft was retired in November 2018, but in April 2019 was returned to service with Eastern, and has operated ever since as part of a 7 strong active fleet as of time of writing. 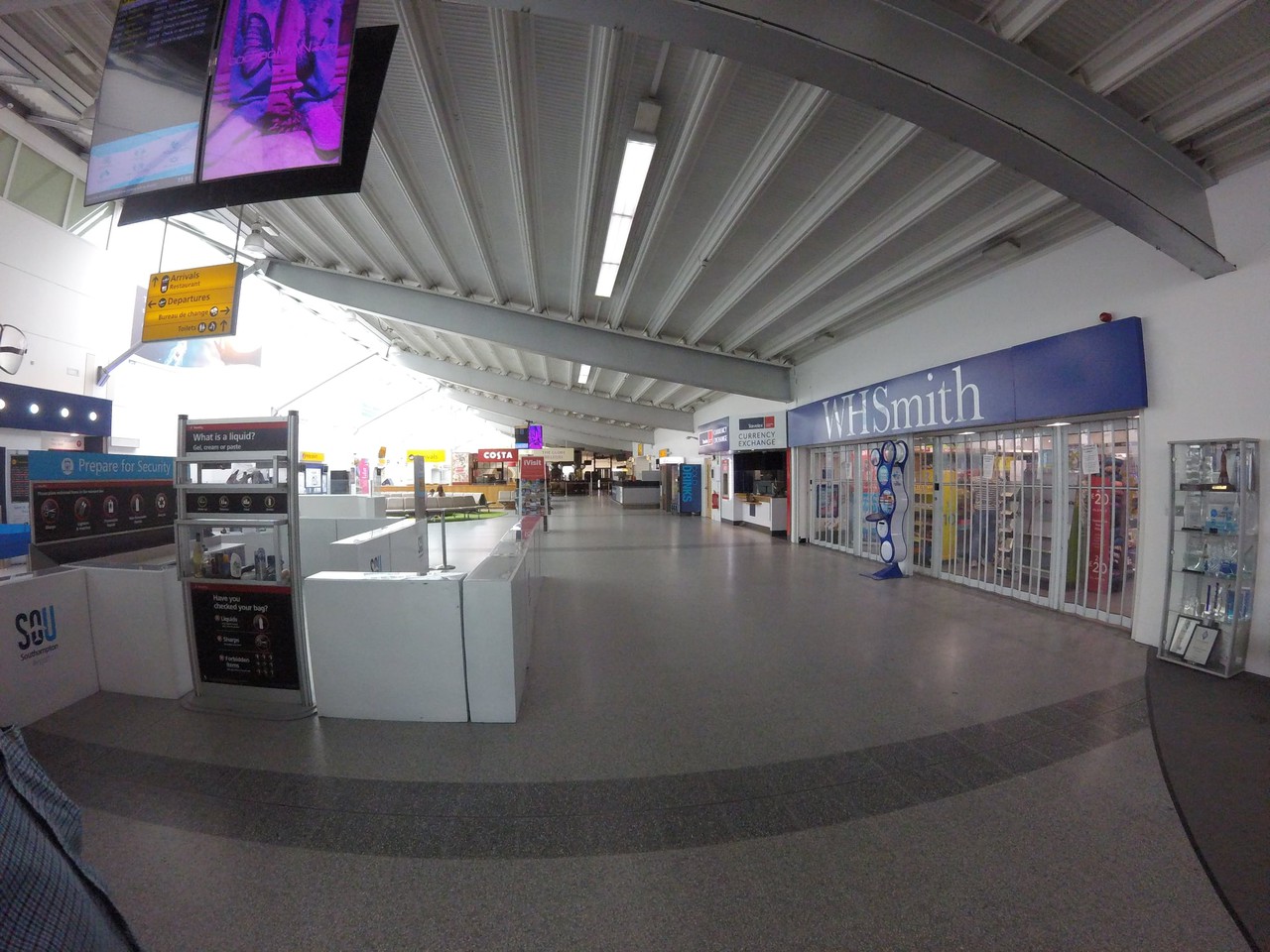 Southampton was very, very quiet. At the time I flew, only one ex-Flybe Dash 8 Q-400 remained parked up (G-ECOM). Eastern Airways had one ATR-72 operating to Manchester and Belfast, with a few BAe Jetstream 41 operating quieter routes, with Loganair planes coming in from their Northern bases (EDI, GLA, ABZ & NCL). 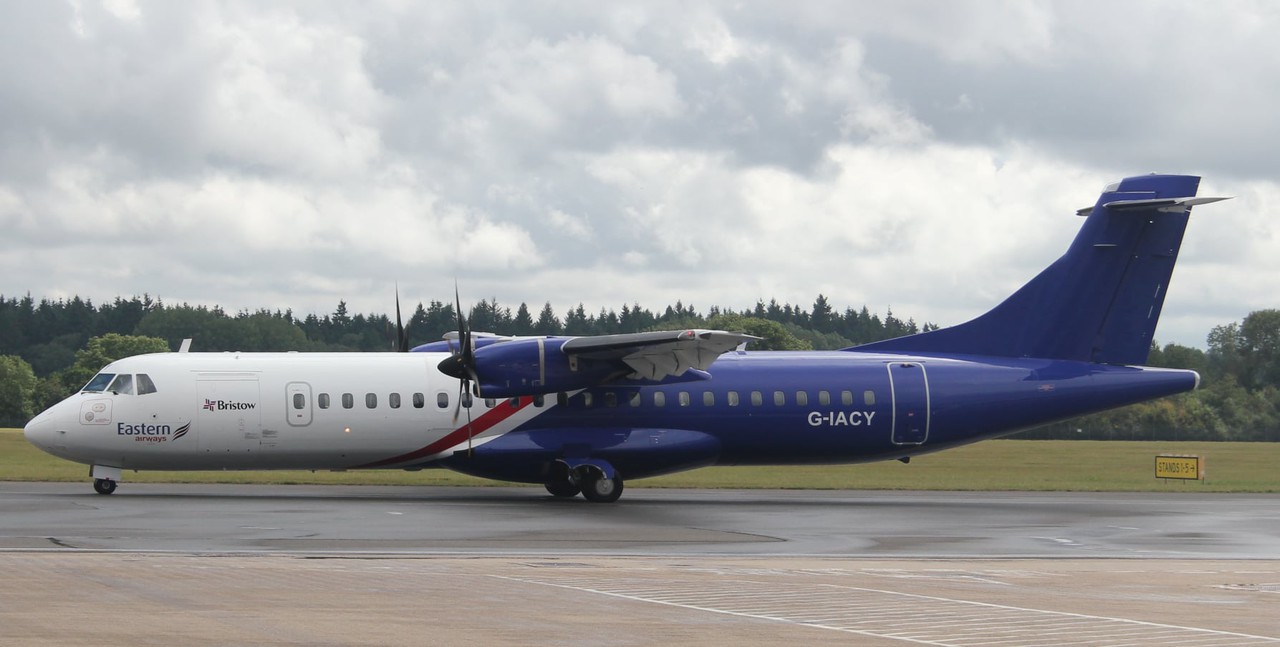 One of the new ATR-72 of the Eastern fleet which is being used on SOU services to MAN, BHD and Scotland

I went to check in and get my rucksack tagged to go in the hold. The Jetstream 41 can't take huge bags in the cabin, so my "big bag" was to ride in the hold. I passed through security in about 2 minutes with no fuss or waiting.

Airside was empty, barring the small number of passengers due to fly with me to Newcastle. No shops, No lounges, No cafes. Everything not related to getting a flight operating was closed. It was such an alien feeling! 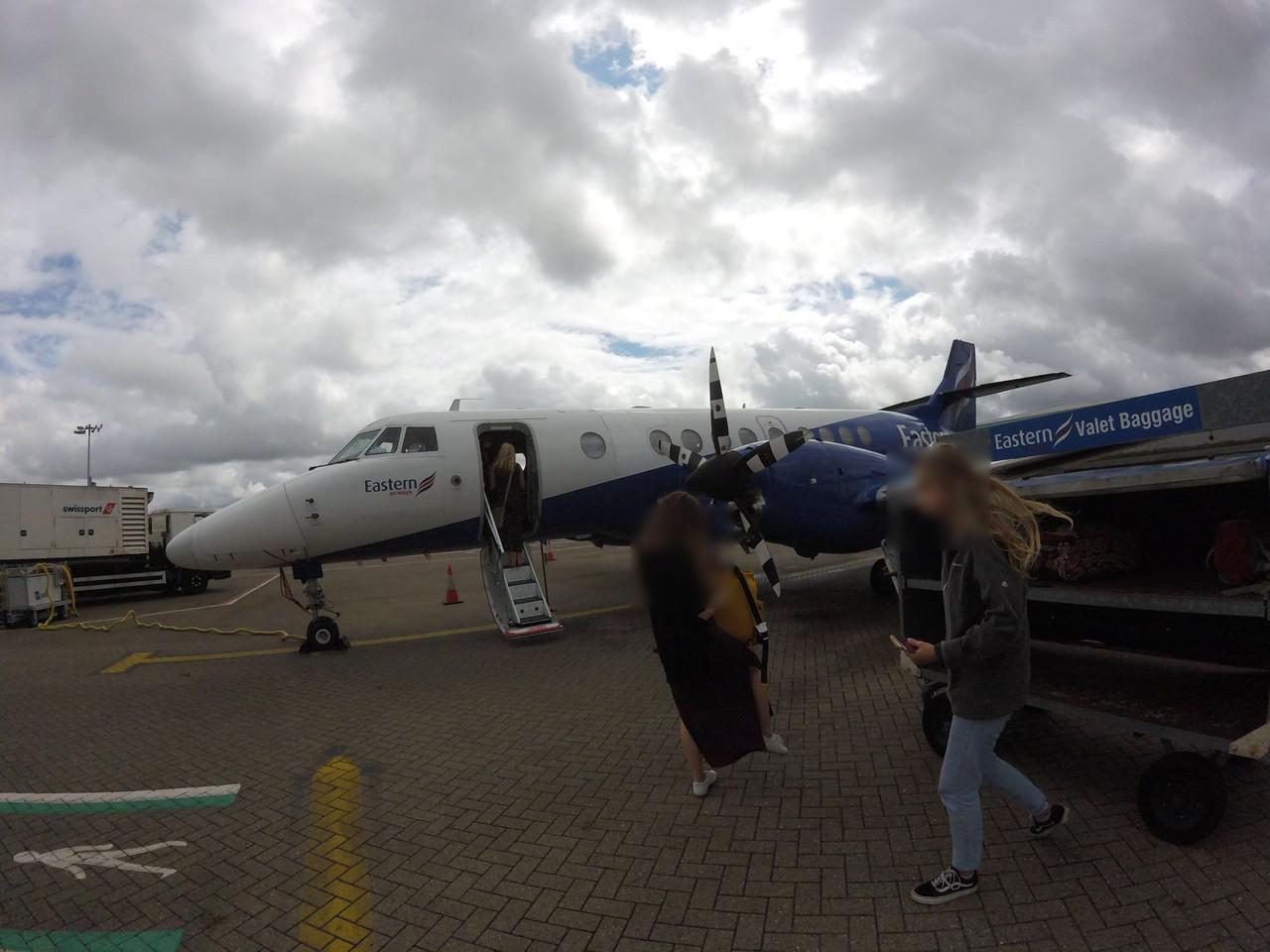 Boarding began on time, however the aircraft boarding was being arranged by the stewardess to make sure it was balanced out and the passengers could be socially distanced as best you could (on a 40 seat plane), I asked for a seat with a specific view, and I was given Seat 3A- with an amazing view of the propeller! This would be a first for me as I had only been seated on occasion next to props on high-wing aircraft, not a propeller at low level! 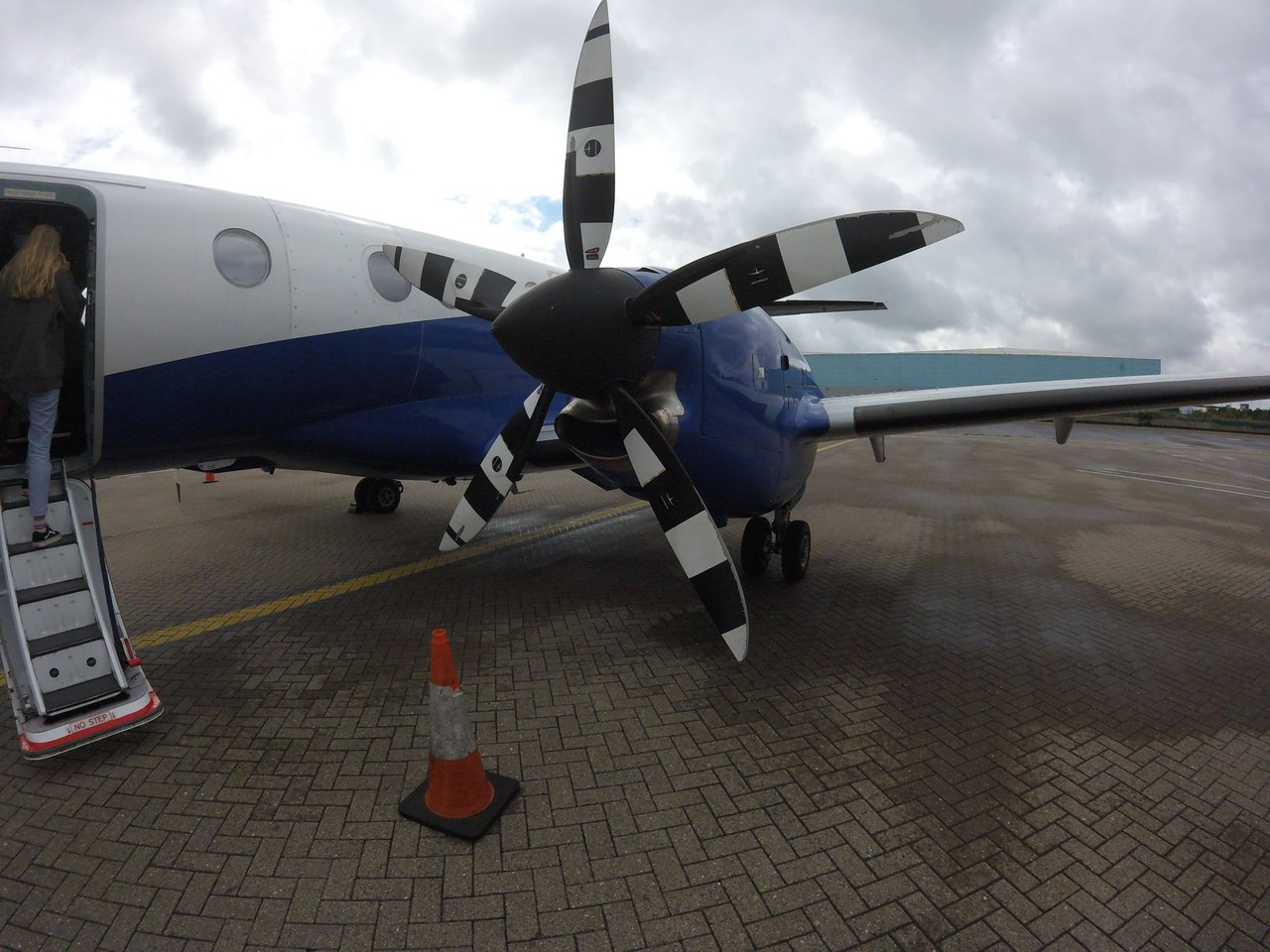 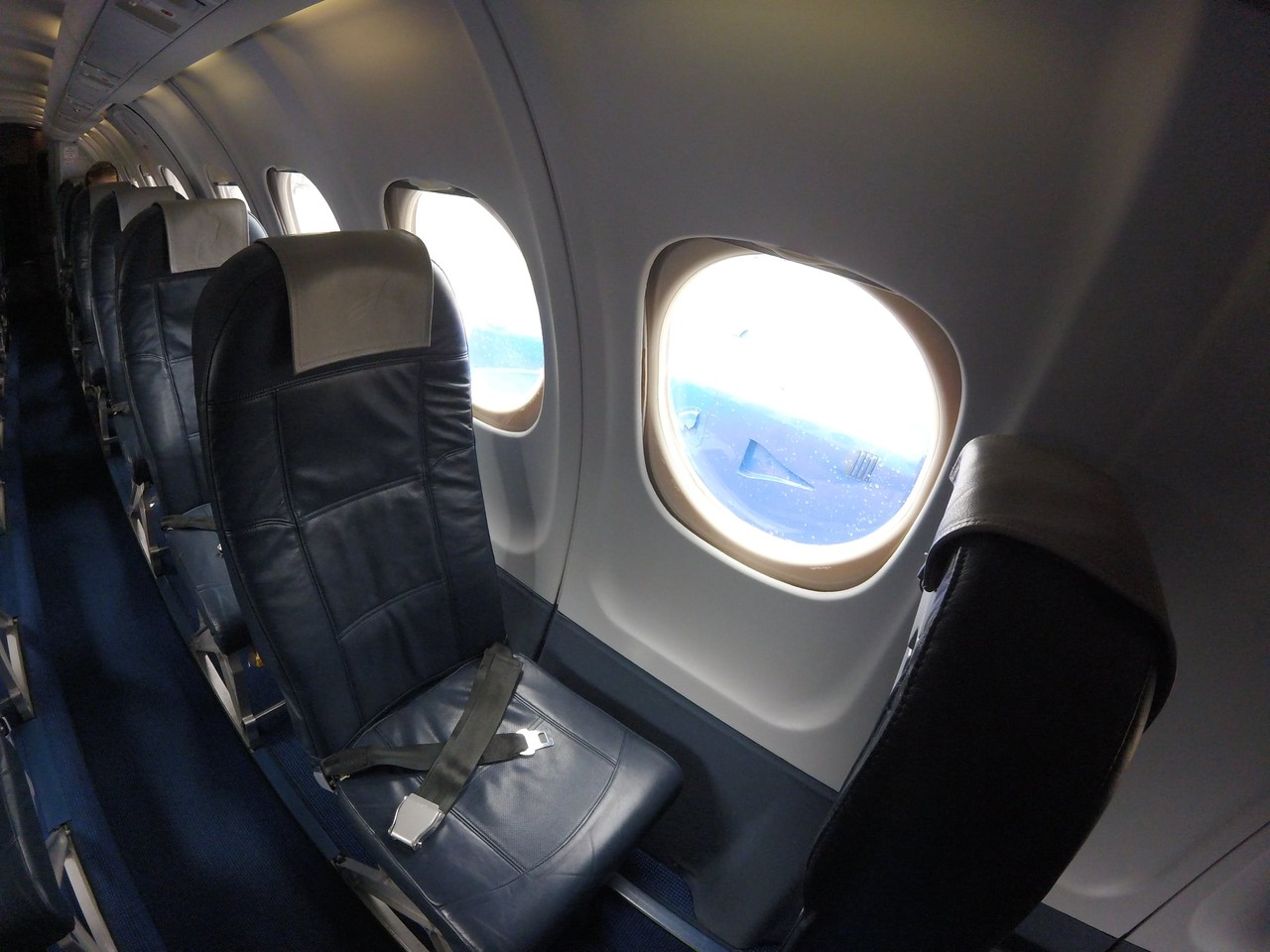 We pushed back a little later than planned, but it wouldn't impact the schedule too much. The taxi was out to the Northern end of the airport and we shot off like a rocket, though I was a little saddened by the sight of the last Flybe Dash 8 Q-400 as we rolled past it. 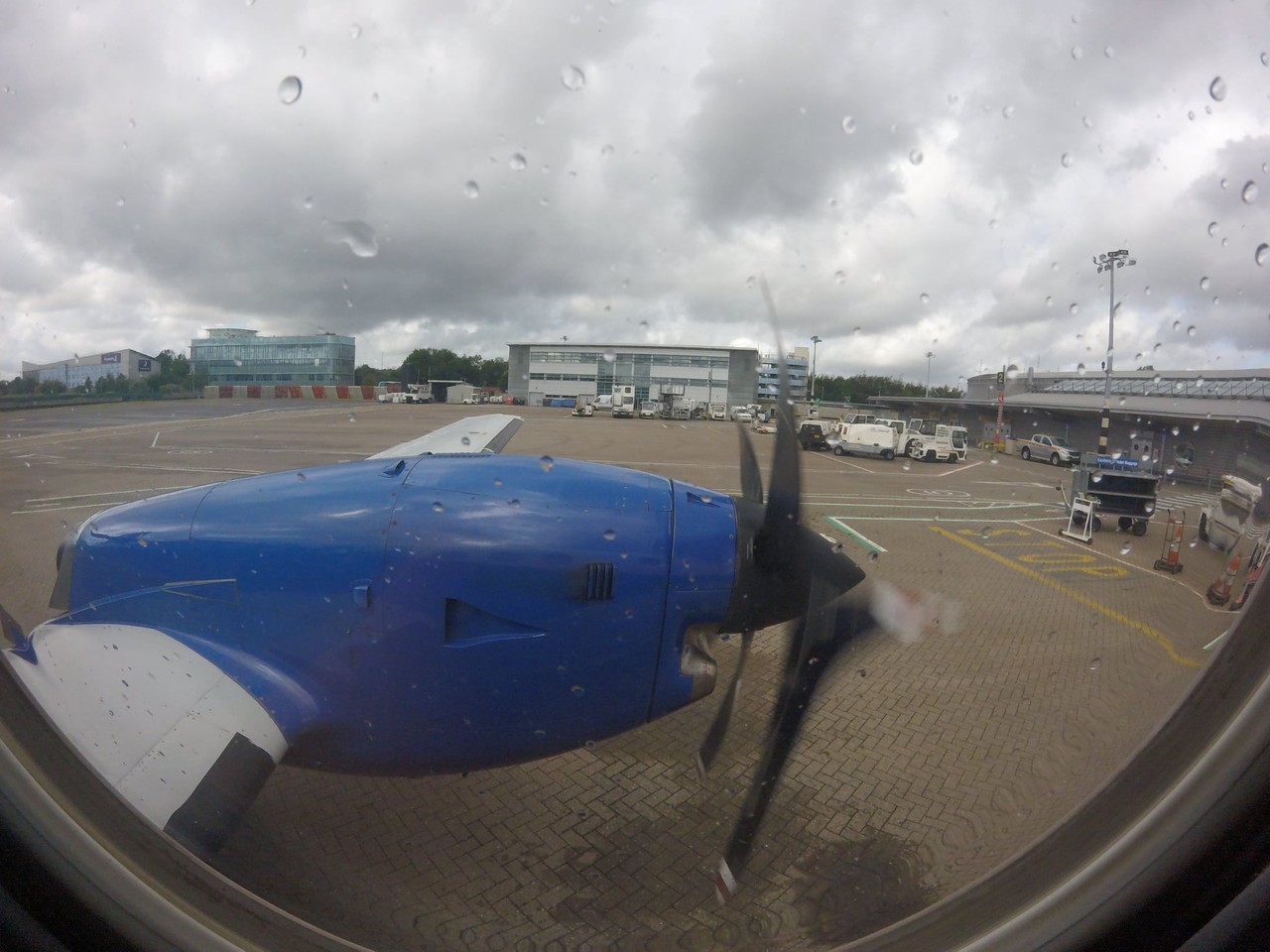 Now this is a view! 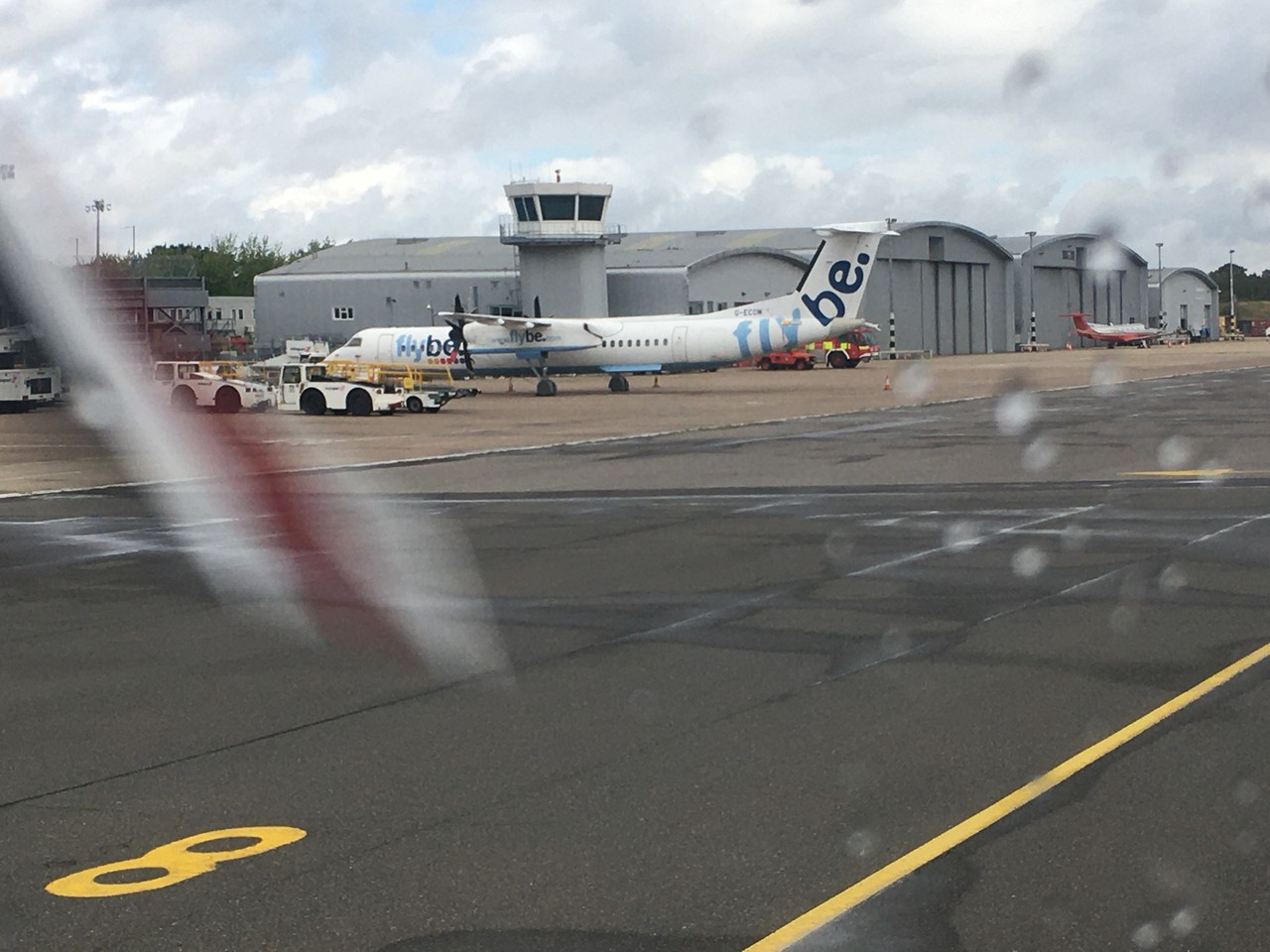 A long-time and major presence at Southampton for most of its run, the last Flybe Q-400 to leave was G-ECOM.

The legroom wasn't that bad for a small plane, but you could see feel the size of the plane, despite being in the one abreast seat on the left of the plane. Due to having a 5 year old boy in Seat 2A, I was in charge of the emergency exit if we had an "Incident". We had a very clear sky over the UK, so looking down I was happily watching the country bellow us as we darted along at well over 100 mph. 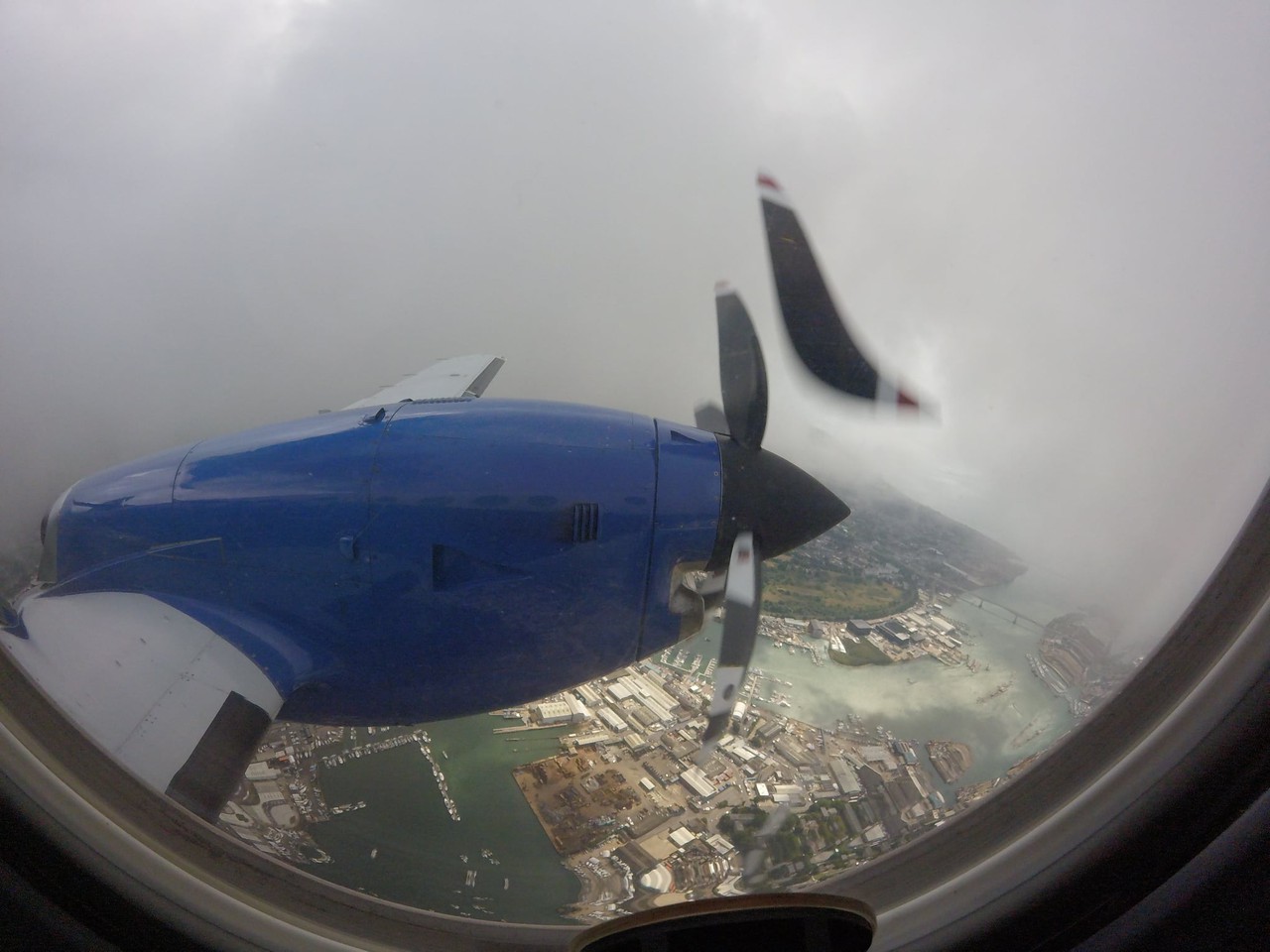 Buzzing out over the dockyards of Southampton 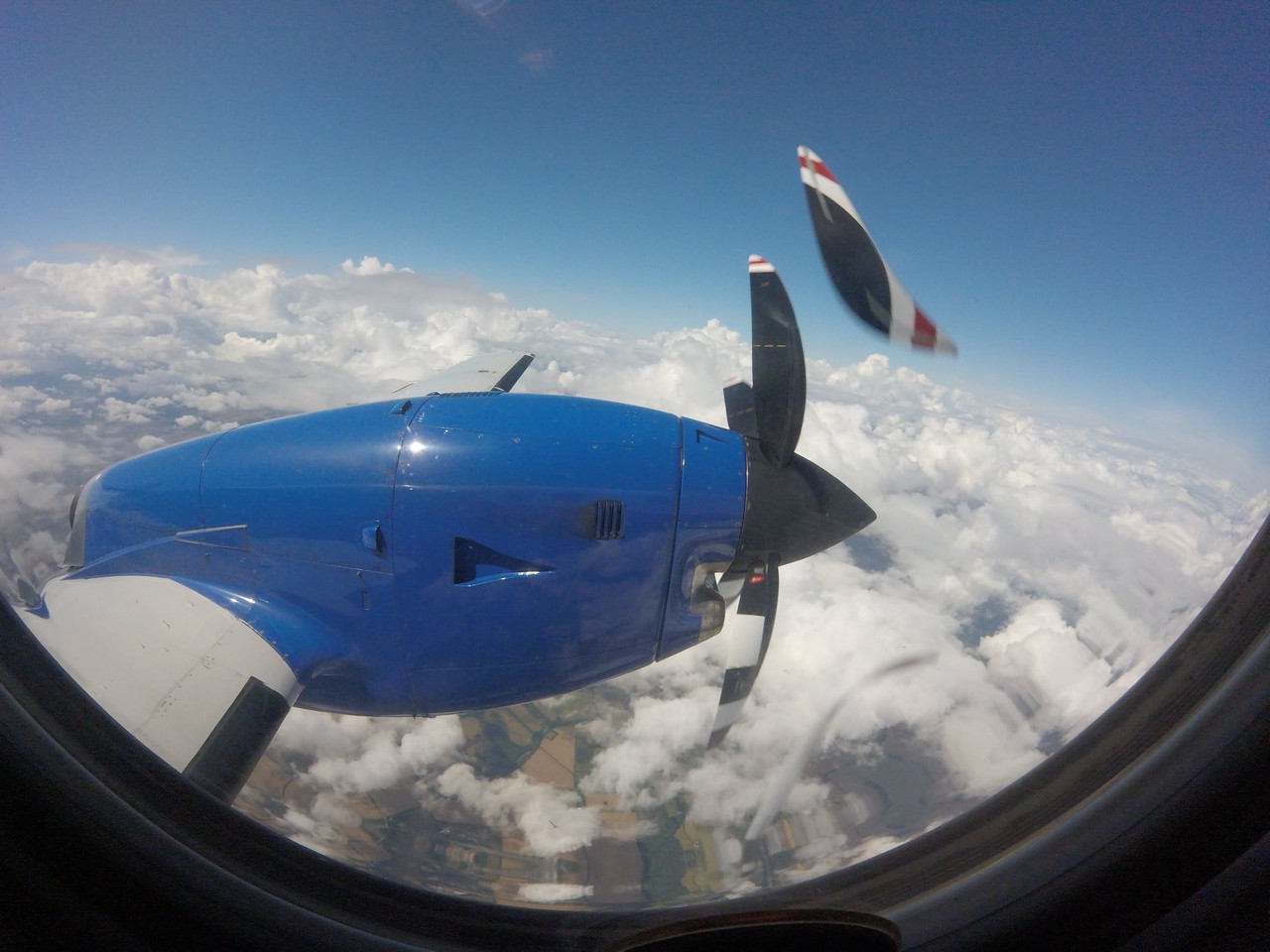 To minimize unnecessary contact with the cabin crew, Eastern service was limited to a bottle of water. Not a huge downgrade from their usual bar service from pre-Covid times, as their flights are normally less than an hour due to their focus on UK Domestic services. 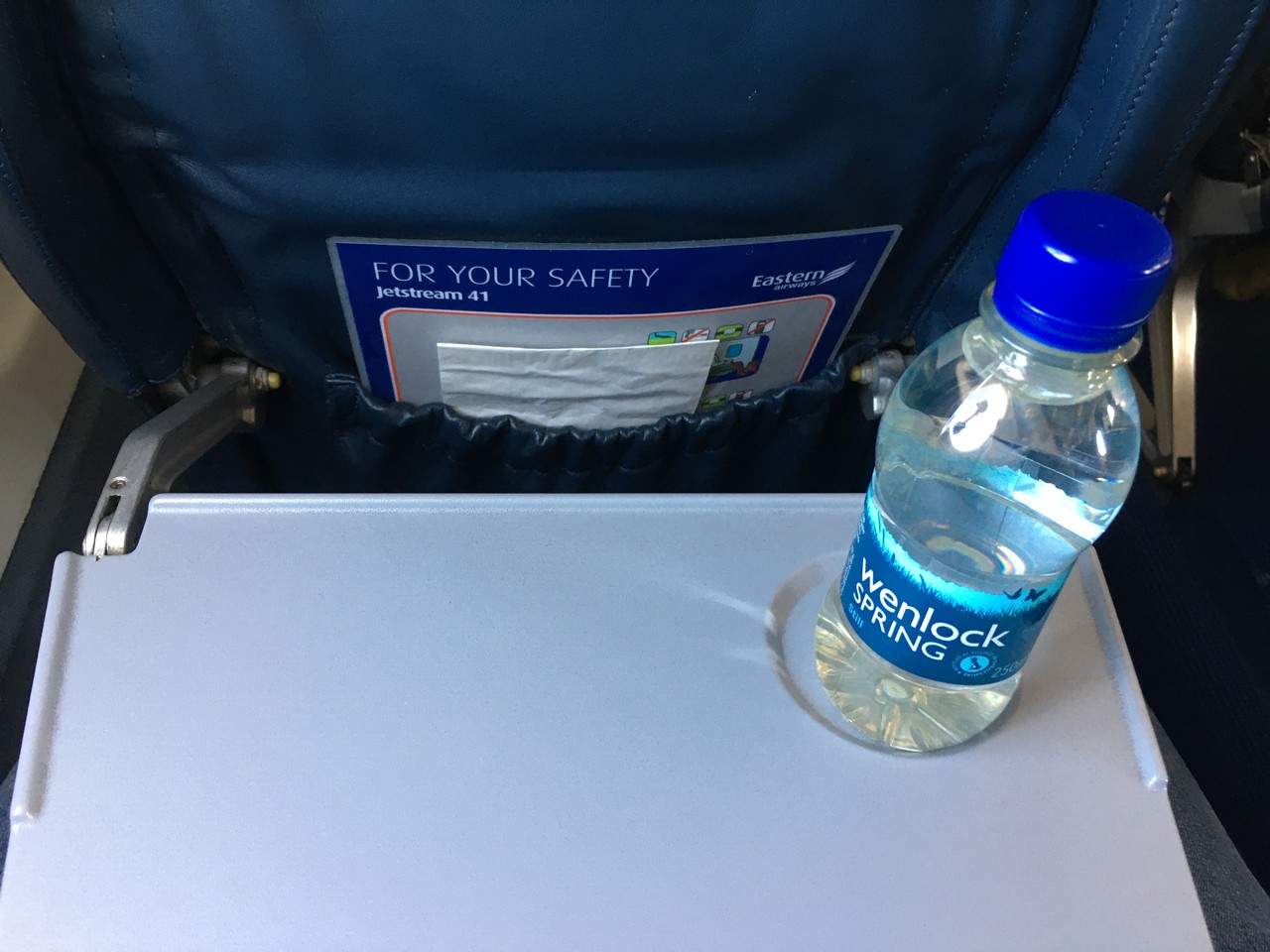 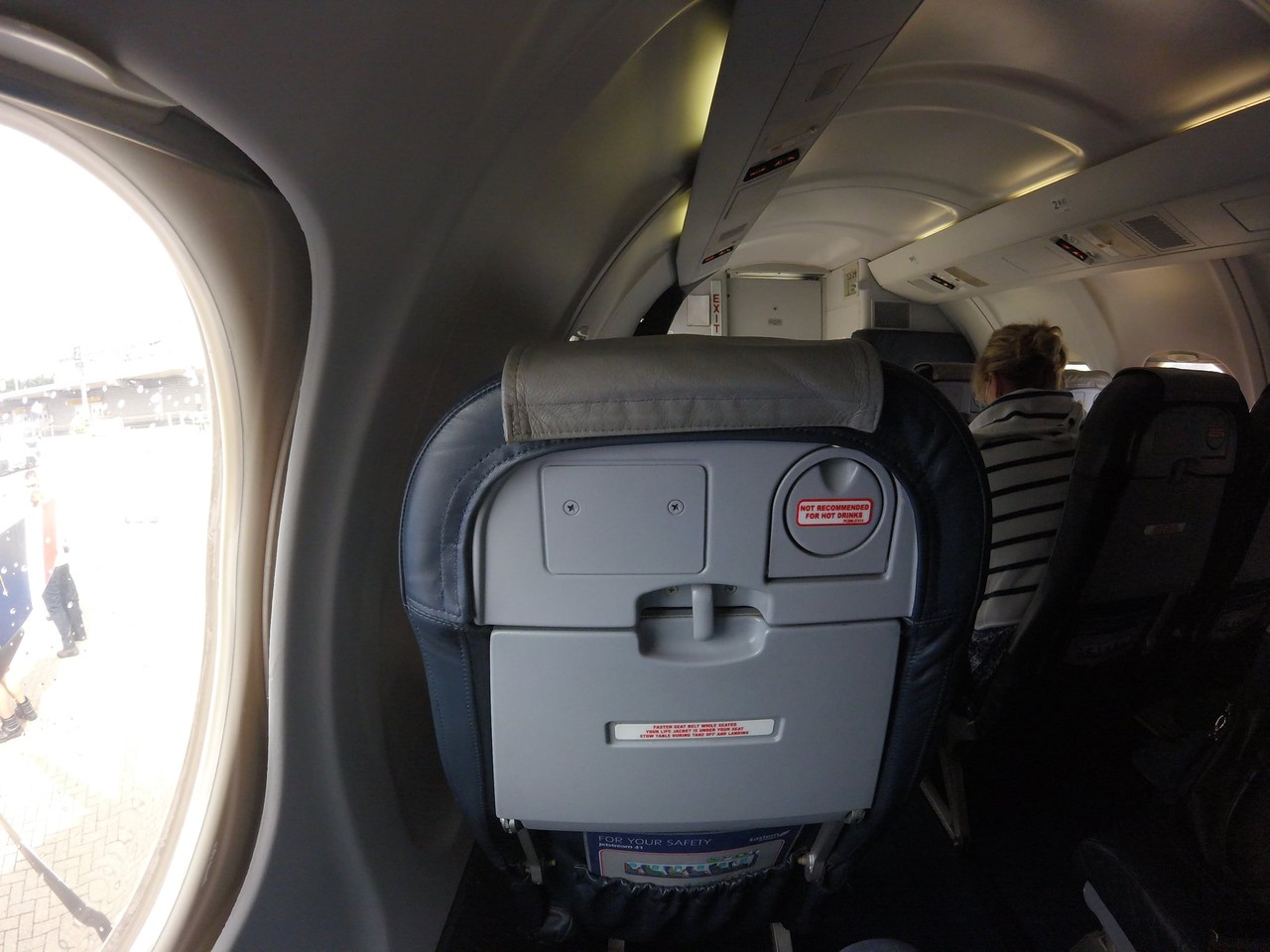 We flew out over the North Sea during our decent and did a huge turn over the Newcastle shorelines to line-up for our arrival into Newcastle. We approached in a standard fashion and landed a few minutes behind schedule, taxiing to a remote stand where a bus awaited us to transit the passengers to the UK Domestic arrivals. 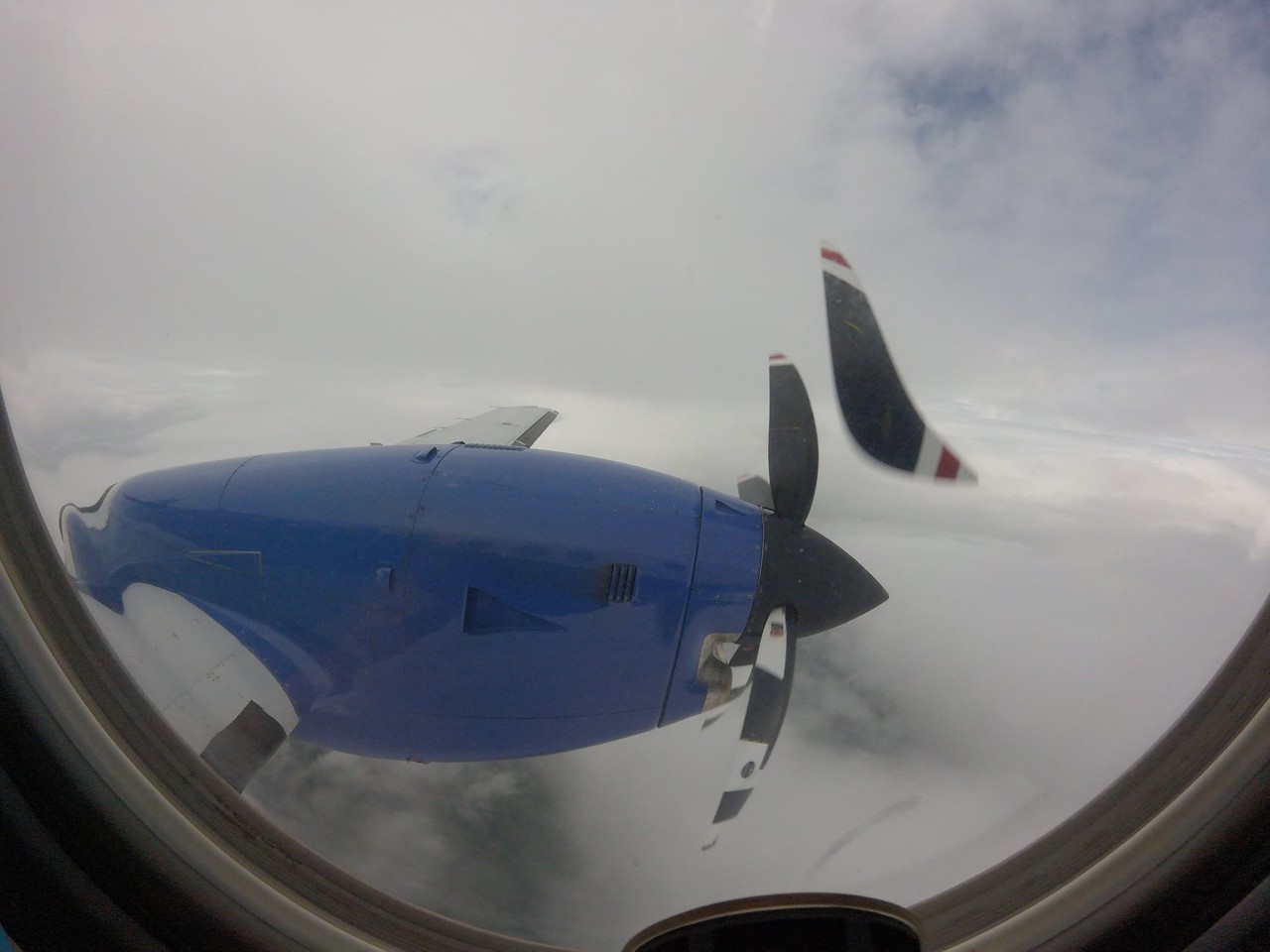 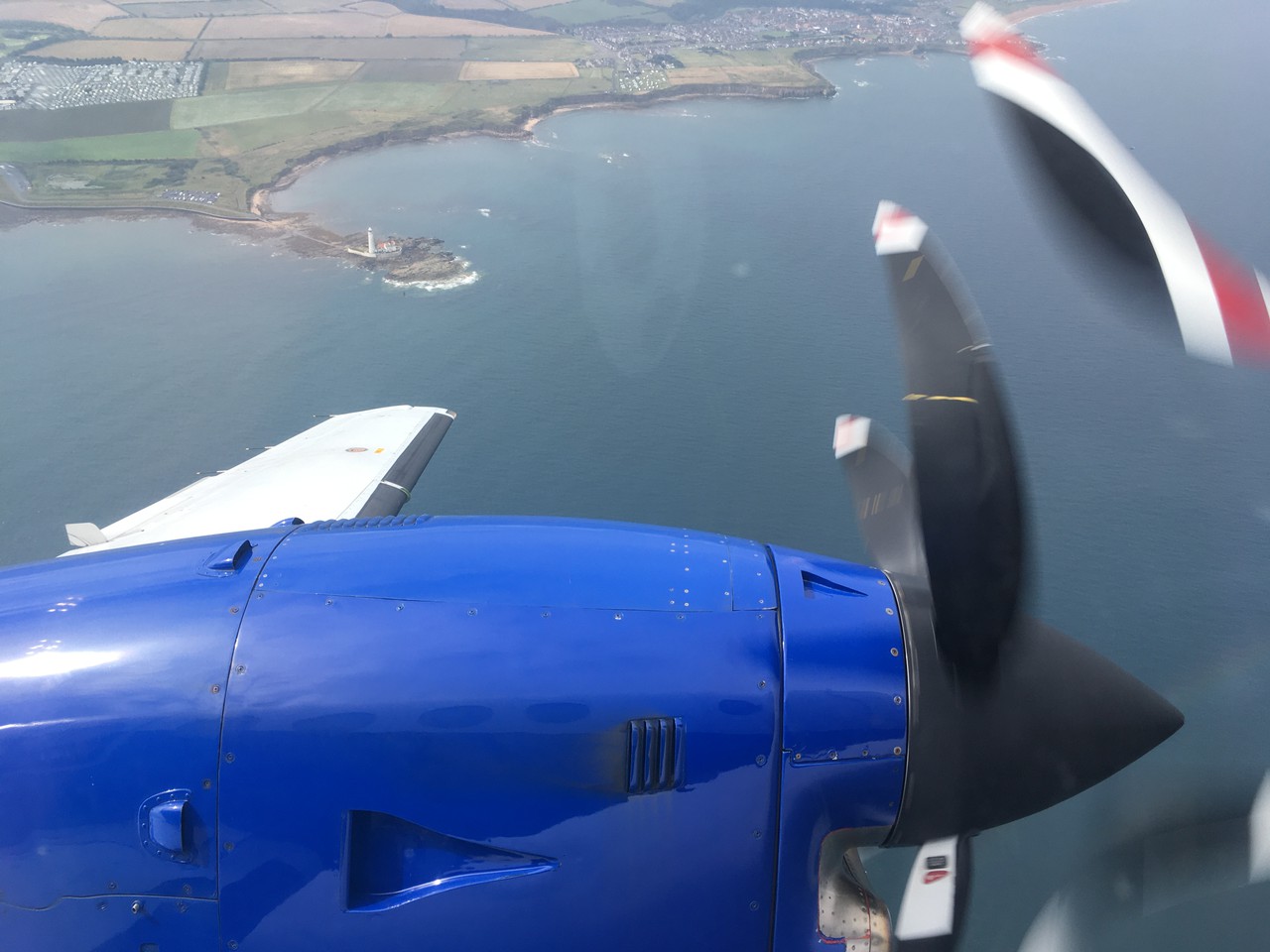 On a quick mention, the crew couldn't allow me into the cockpit due to Covid-19 distancing measures, but were ok for me to get a look and picture from the doorway, I was wearing a mask to prevent any major problems. 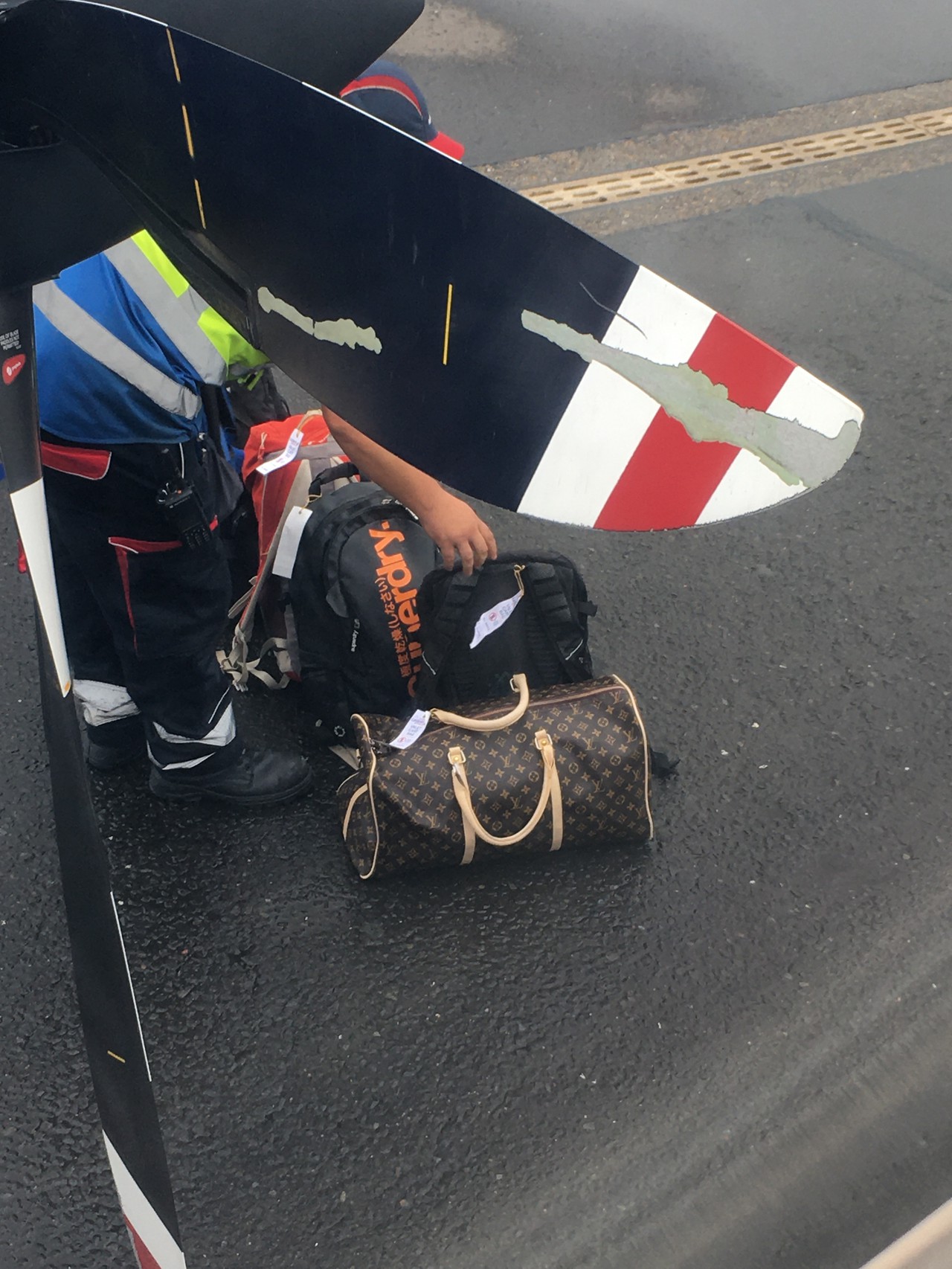 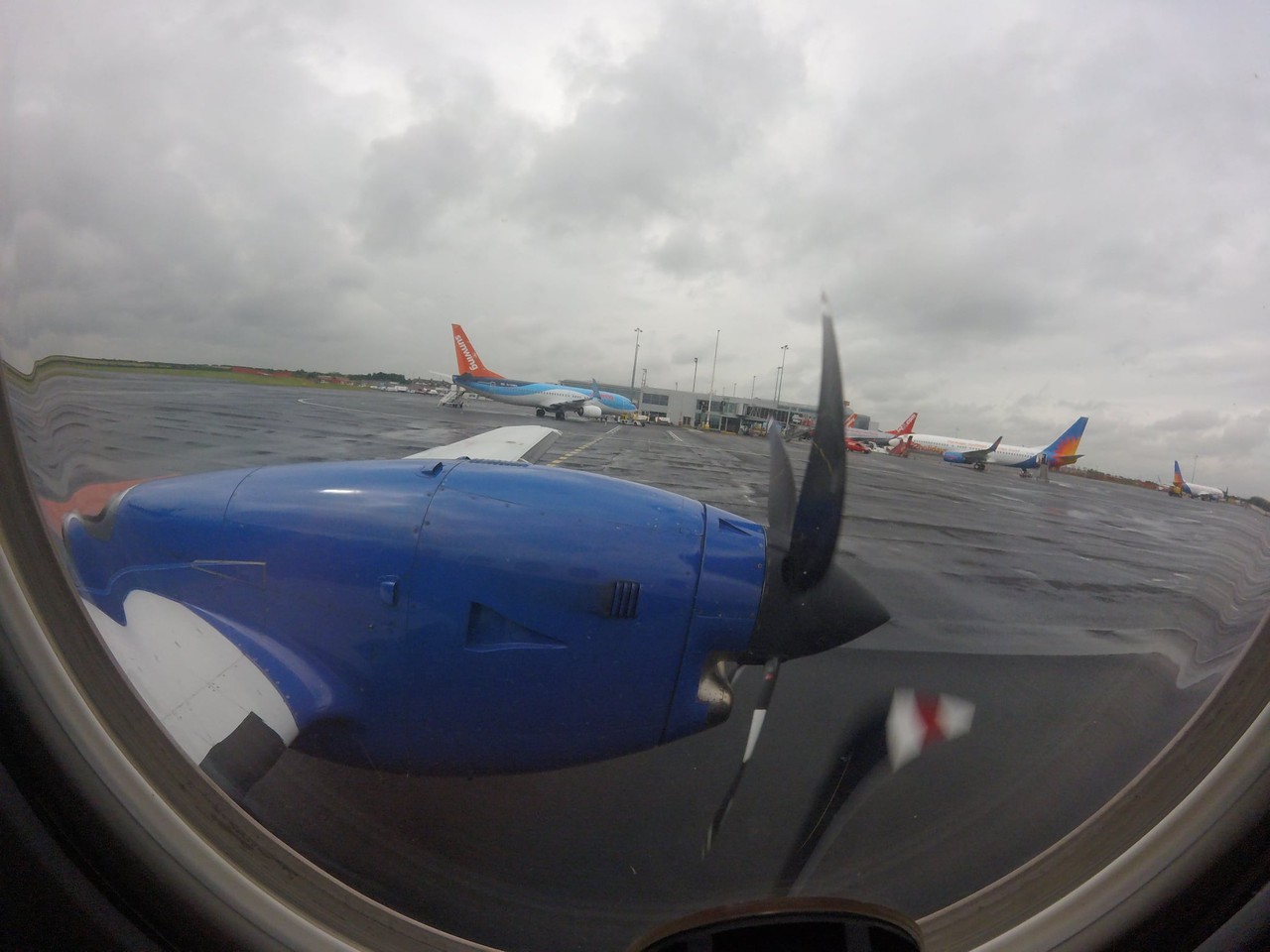 Jet2 and TUI Boeing 737-800 at NCL. TUIuk often leases their 737's to the Canadian Sunwing for the winter season. 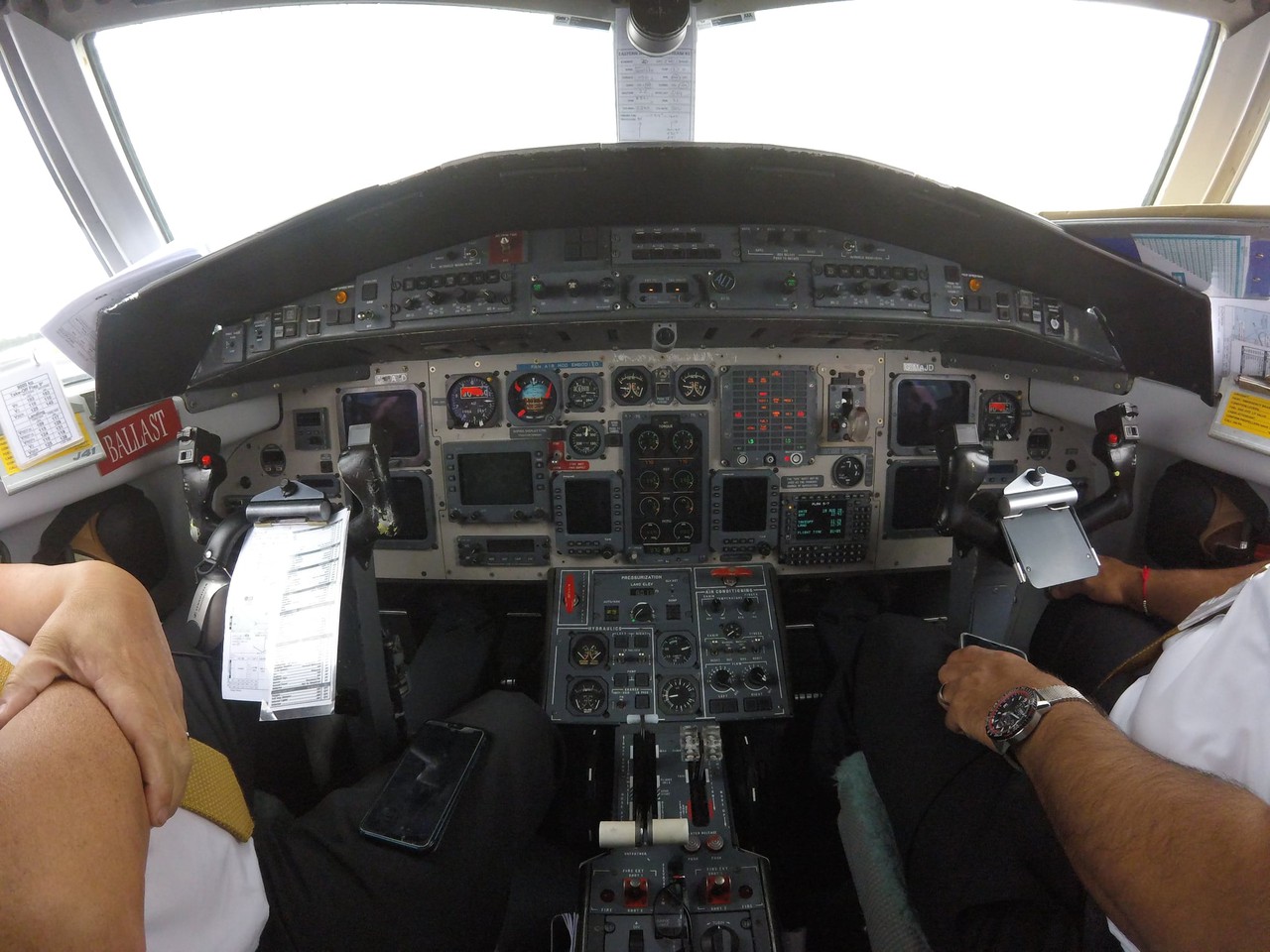 Compare to aircraft designed in the 2000's this cockpit is retro, but man it looks great!

I also got a unique sight of a go-around from an RAF Airbus A400M "Grizzly" on a training exercise! 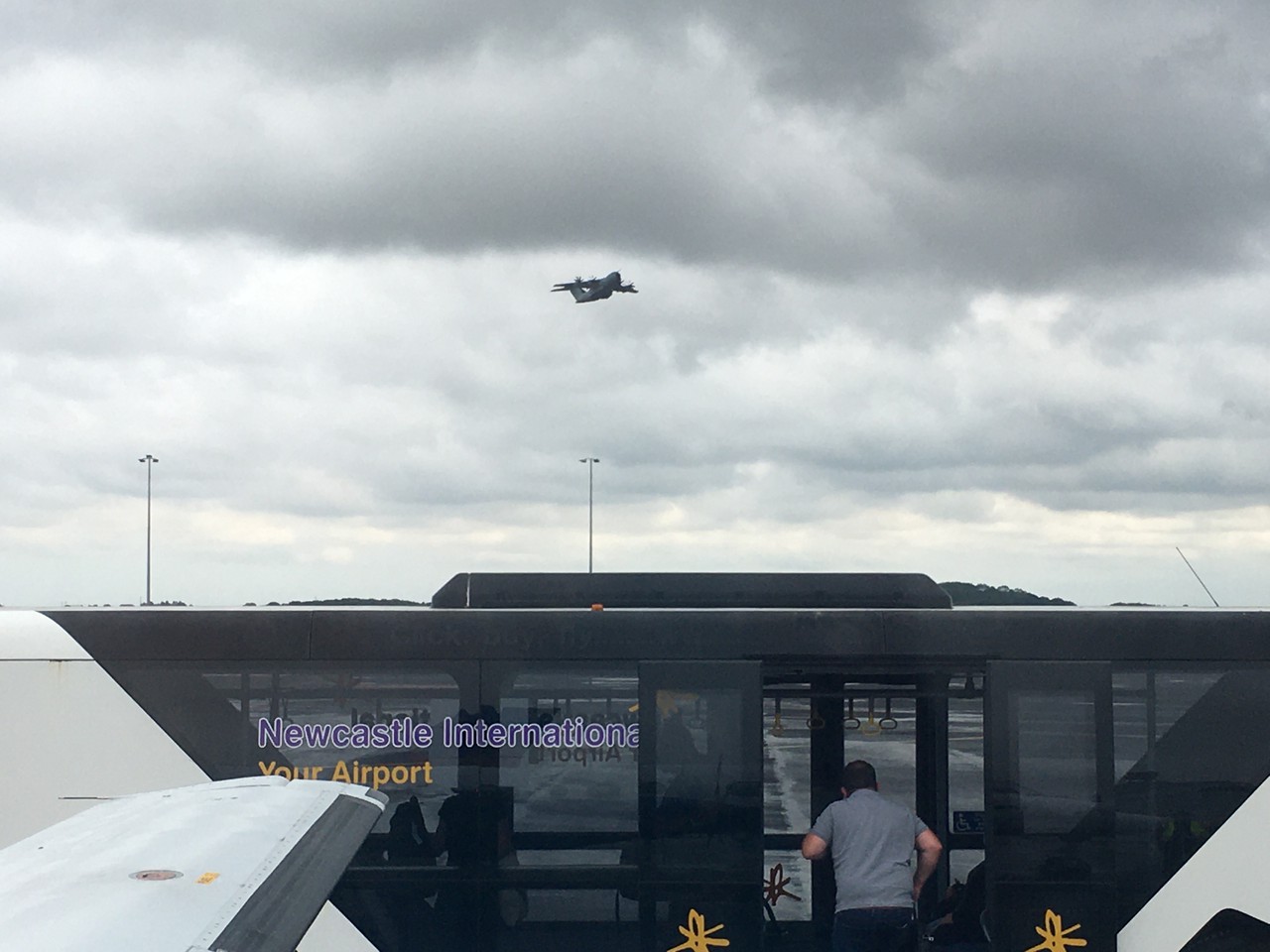 The bus took us around most of the taxiway, it was pretty quiet at this time, with only 4x Boeing 737-800 (TUI/Sunwing livery and Jet2) parked at the terminal. 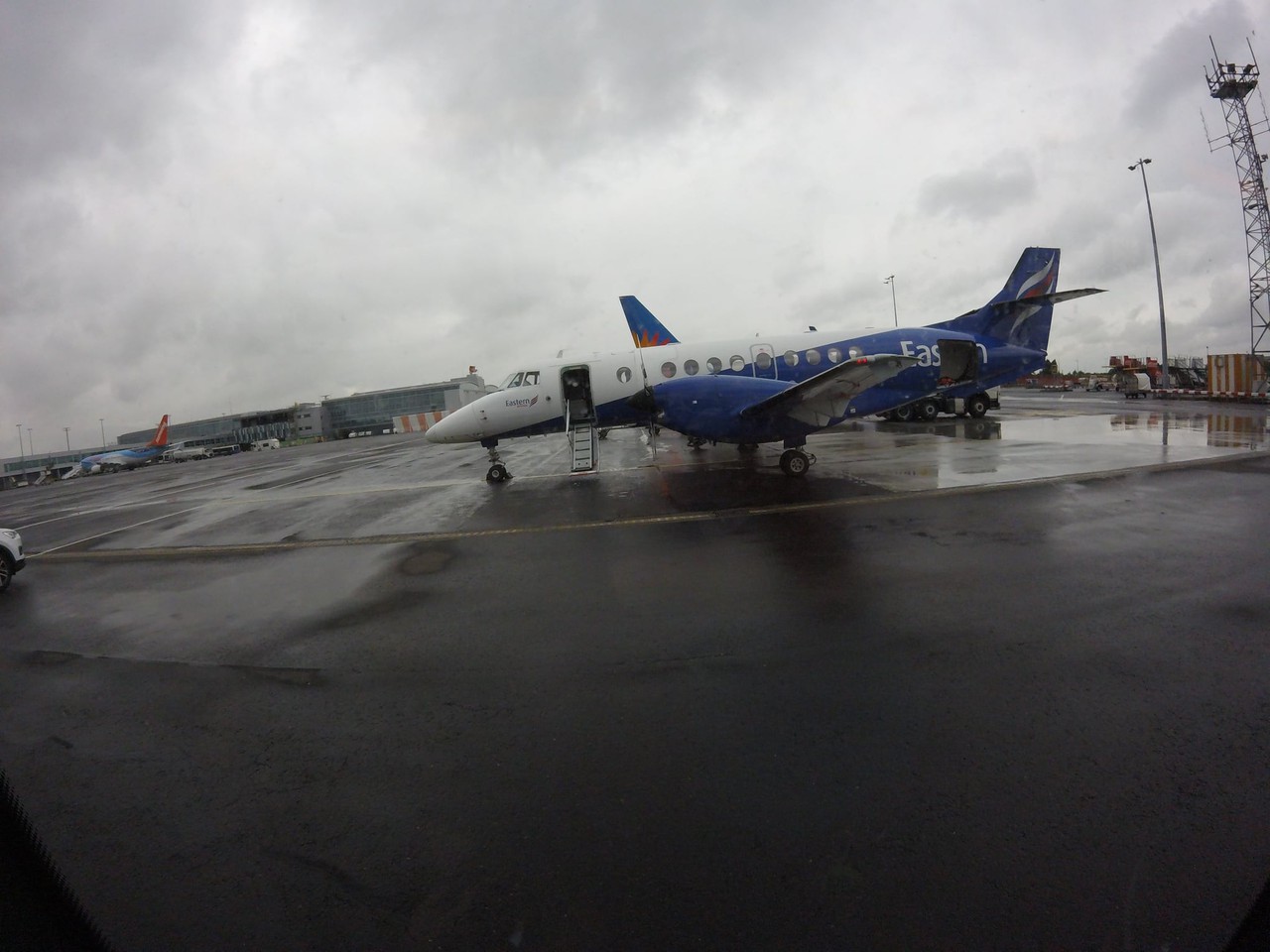 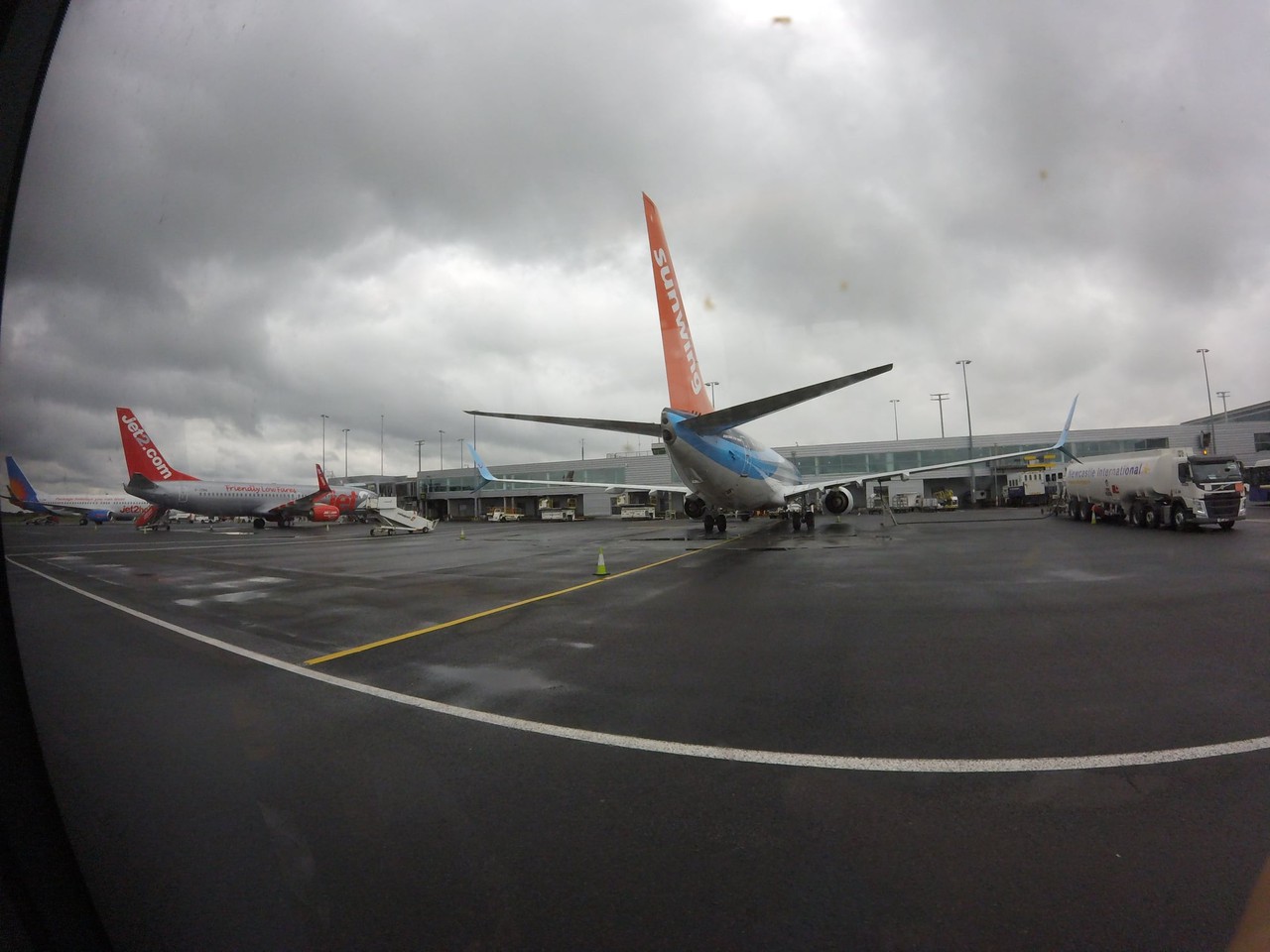 Overall a decent and reliable service from Eastern Airways, was amazing to add another aircraft type (especially something as unique as a BAe Jetstream 41). Hopefully their usual service will make a return someday soon, but the water was a good touch of service under the current situation.

Southampton is currently a shell of its former self due to Flybe's bankruptcy and the Covid-19 pandemic, however I await it to slowly get back to its former glory as a regional stronghold in the South of England.