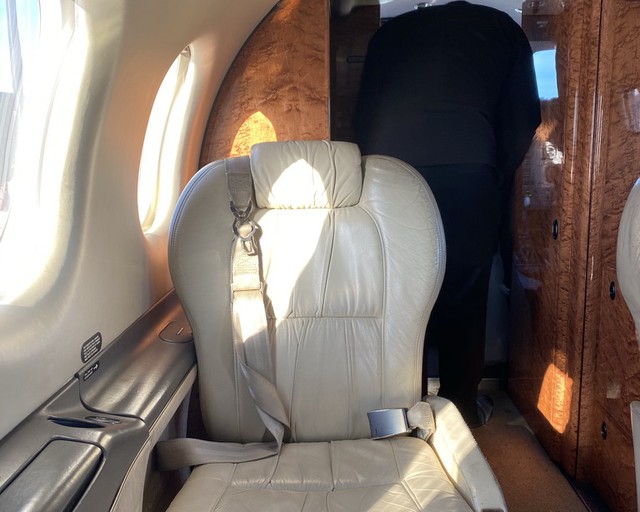 Greetings and welcome to another flight report! Today I will be flying Boutique Air for the first time from BWI to Norfolk, Virginia.  I booked this flight for $59 one way in a spur of the moment trip. I was very excited to try Boutique Air as they advertise themselves to the motto, 'fly private for the cost of commercial.' While this may not be exactly the case, it sure sounds attractive and it seems it'll be the closest I'll ever get to flying private so I sprung for the opportunity. I arrived at BWI about an hour before my flight and followed the signs to Boutique Air. Keep in mind even if you've checked in online and/or printed a boarding pass you'll have to stop by the counter for weight and balance reasons. 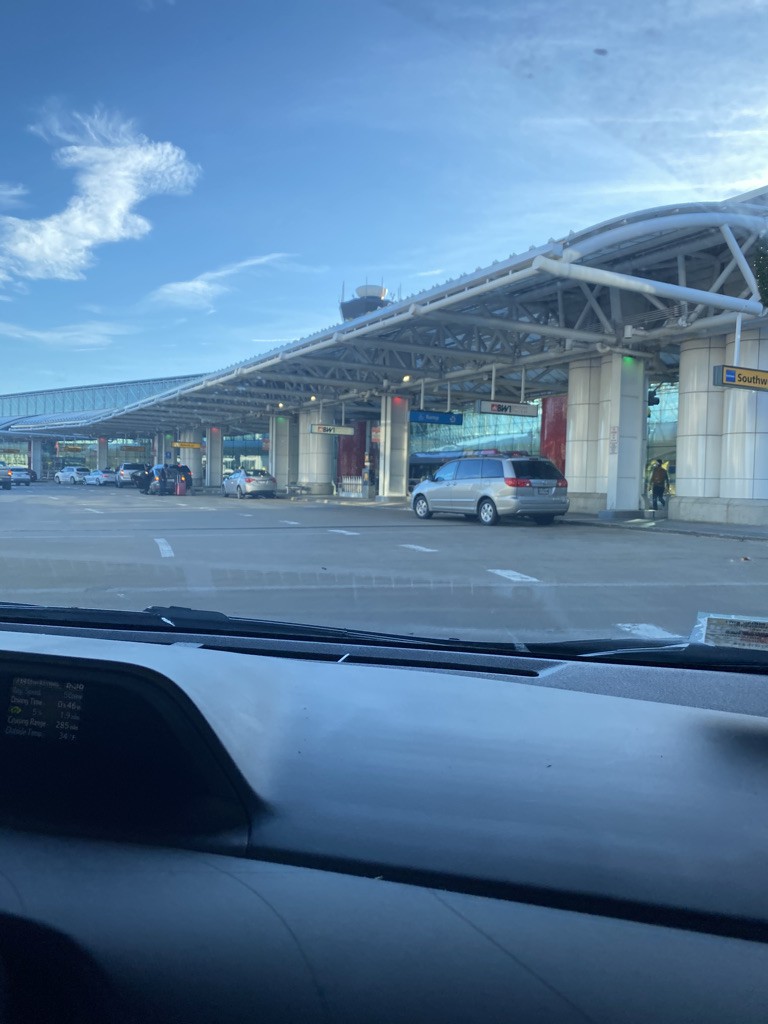 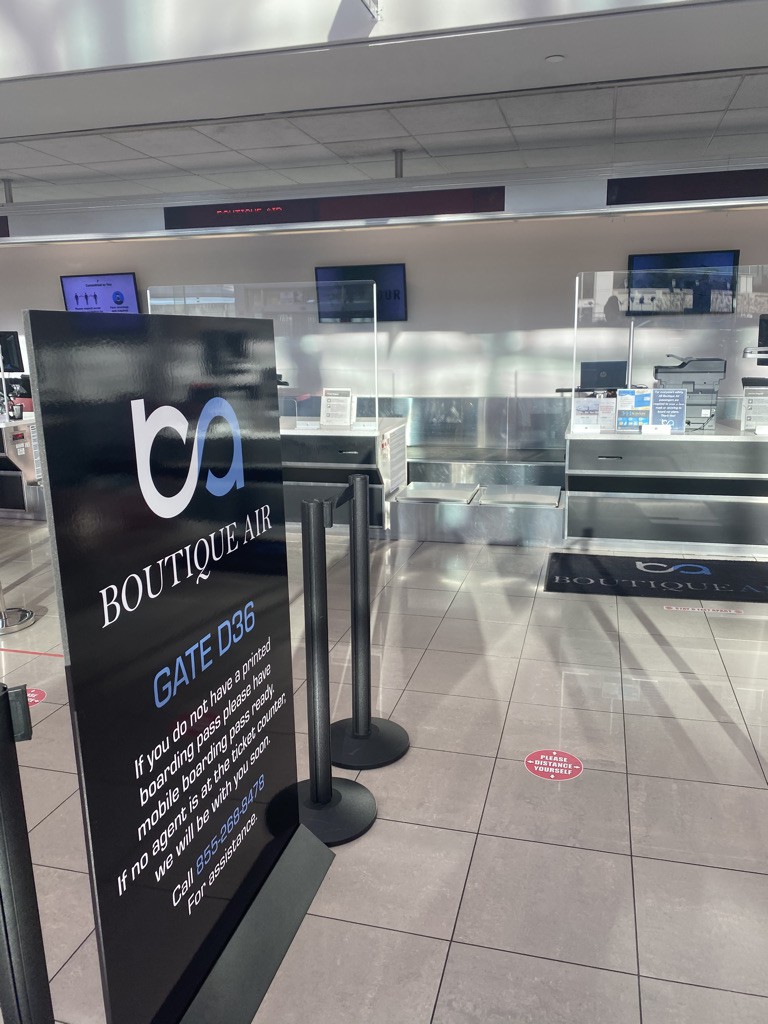 The friendly lady who would act as both the check in and gate agent was very efficient. She checked my ID, asked my weight and printed out my boarding pass and went above and beyond by writing a very detailed set of directions on the back of it. 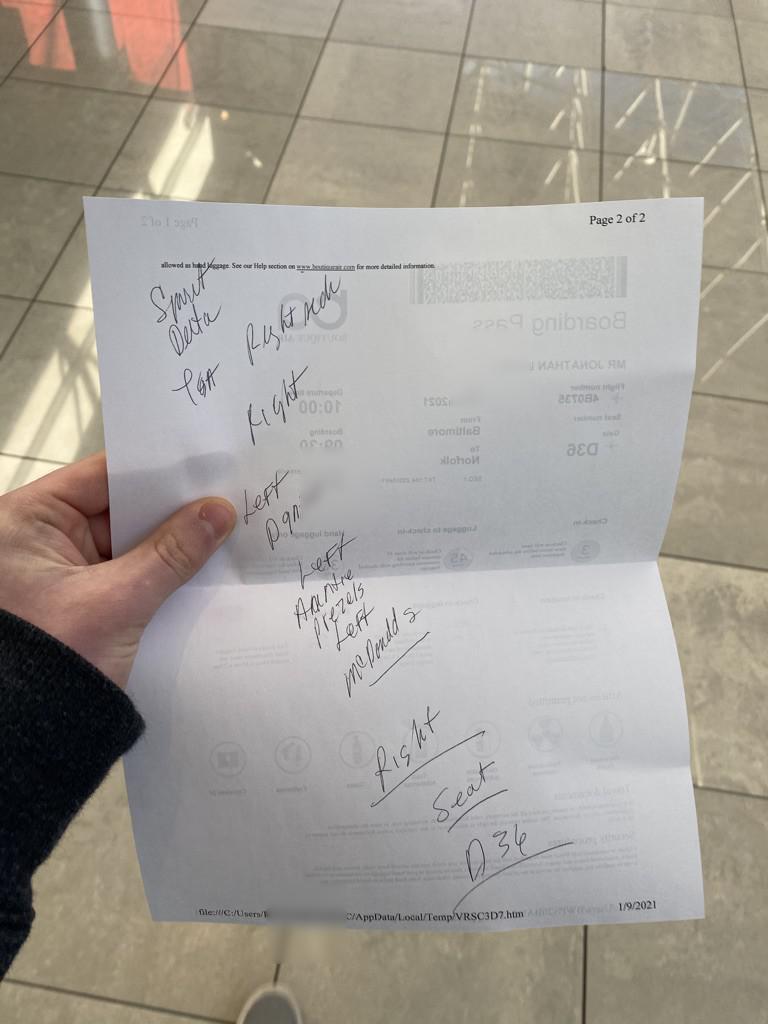 Funny thing was that the boarding pass was printed from a standard issue home printer rather than the usual ones for boarding passses. I walked to the security checkpoint and had cleared it within 10 minutes. I walked another 10 minutes to the gate are which had some nice, comfortable chairs as opposed to the normal airport seating. Our 2006 Pilatus PC-12 was in view, awaiting us on the ramp. 15 minutes later, boarding was called by the same lady. Me and the sole other passenger were called to board the plane. It's always fun to walk out on the tarmac! 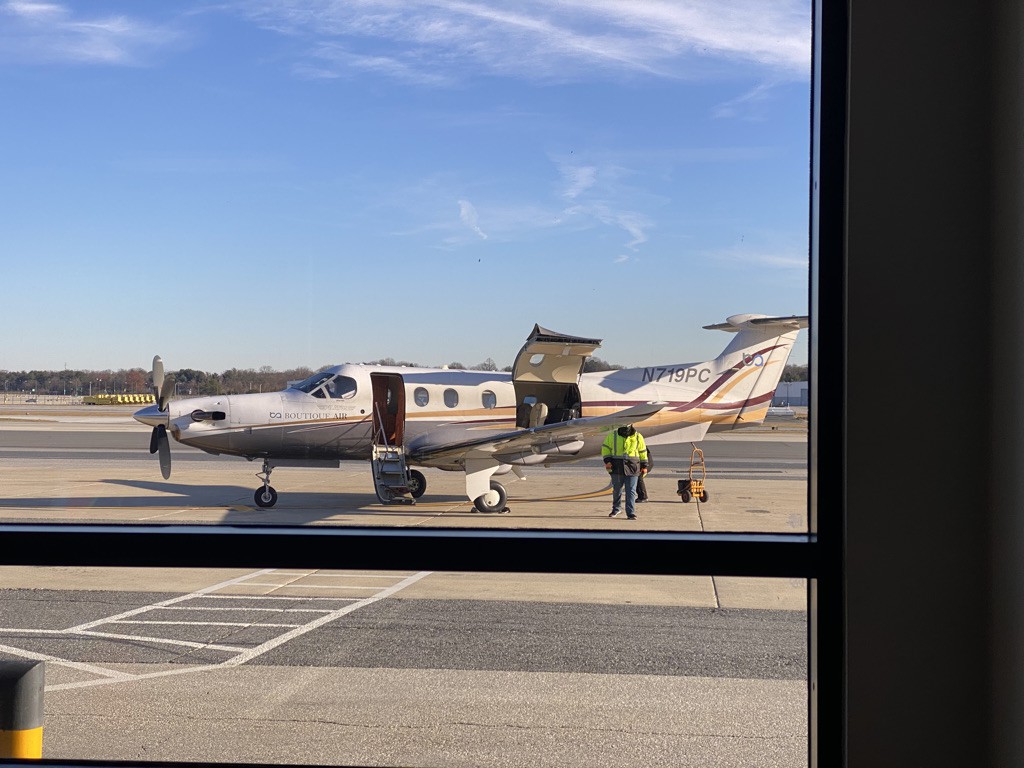 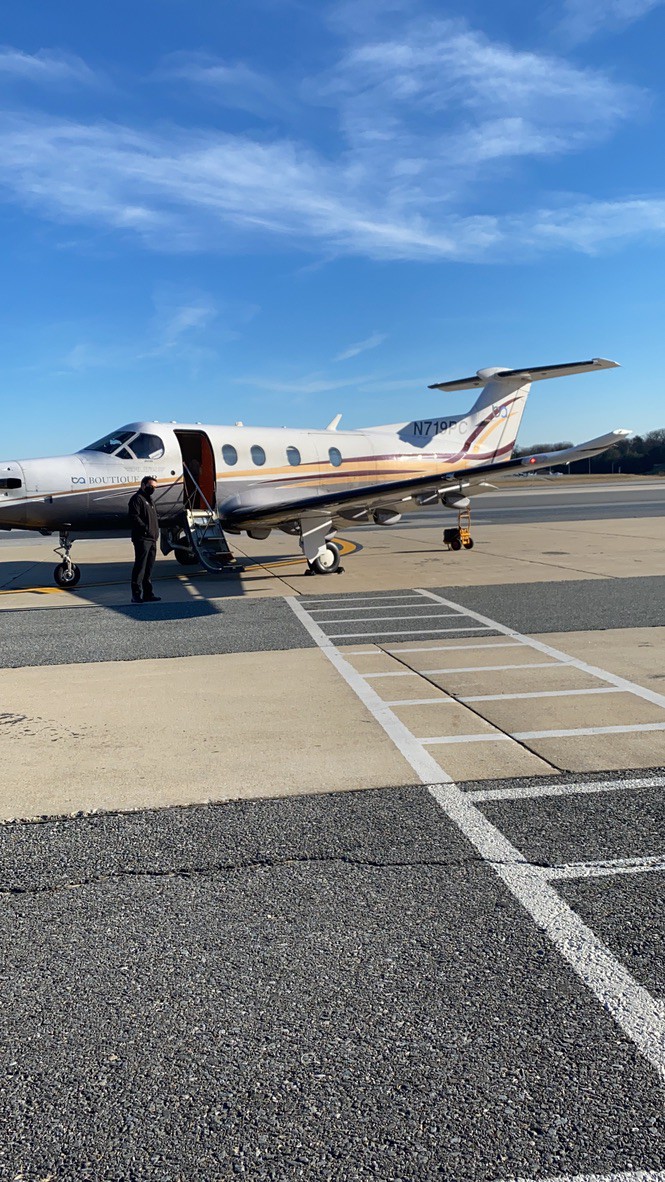 The first officer was waiting at the stairs of the plane to check our boarding passes. We were instructed not to sit in either the first or last rows (presumably due to weight and balance reasons) as we stooped to board the plane. 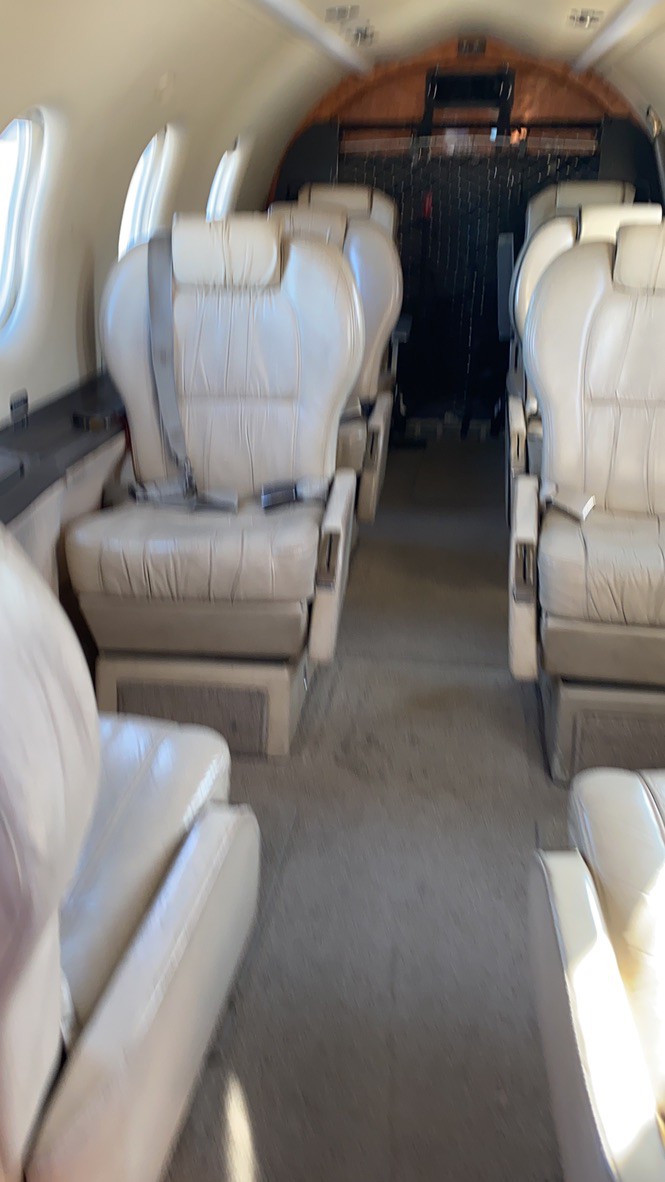 The cabin is configured in an 8 seat layout with two rear facing seats at the front, and 3 rows of front facing seats. Keep in mind the back two seats aren't as nice as the forward 6 as they seem to be designed to be easily removable from the plane. My immediate impression of the cabin was that it was old and worn. The leather was showing its age as well as the interior panels. The seats are equipped with AC power plugs and lights and air vents (we were told the latter two were broken). I took a seat in the second row as did the other passenger onboard. 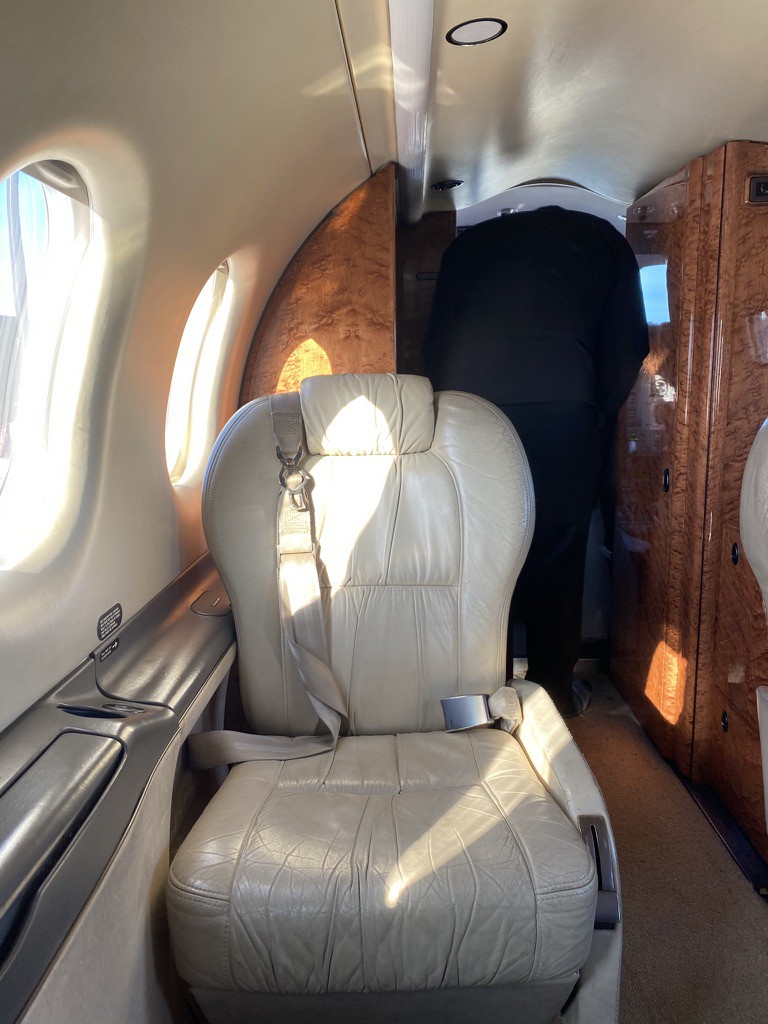 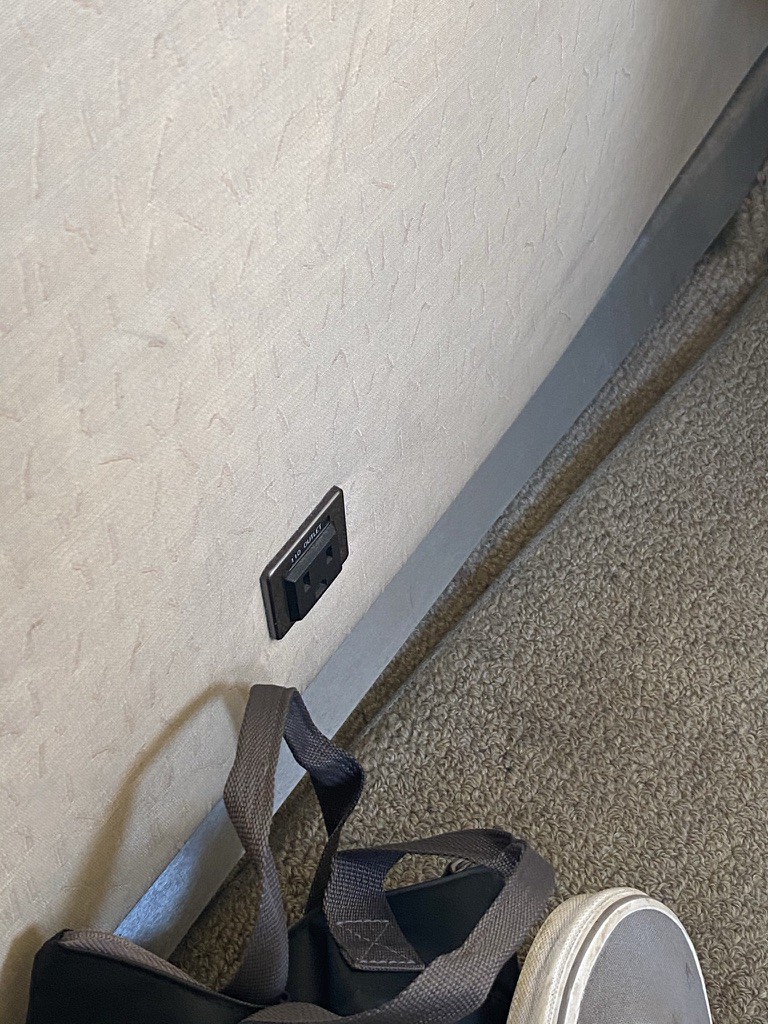 The legroom was endless and you could use the seat across from you as a footrest. Immediately after we boarded, the main cabin door was shut and the first officer gave one of the quickest safety briefings I've ever heard. The engines were started as he was doing so. As soon as he took his seat back in the cockpit, we taxied out to the runway. We had a quick takeoff which gave us views of the airport. 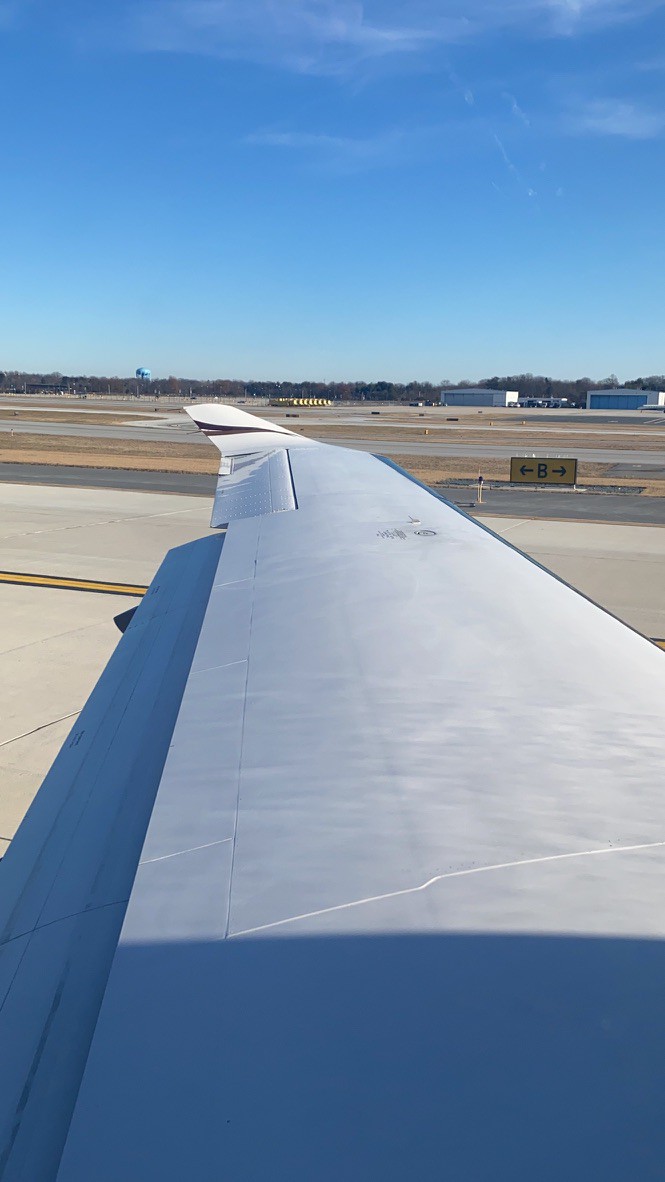 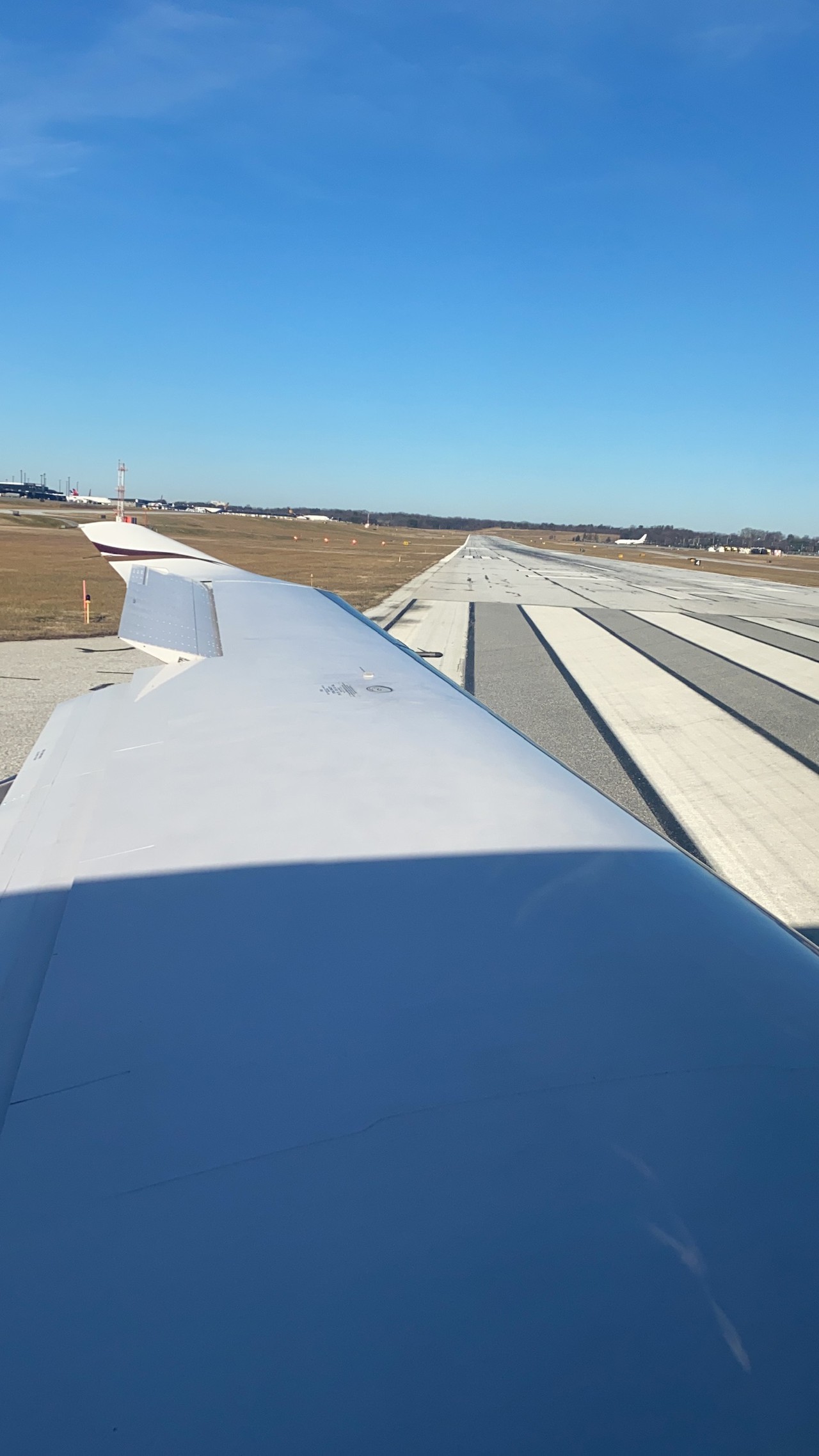 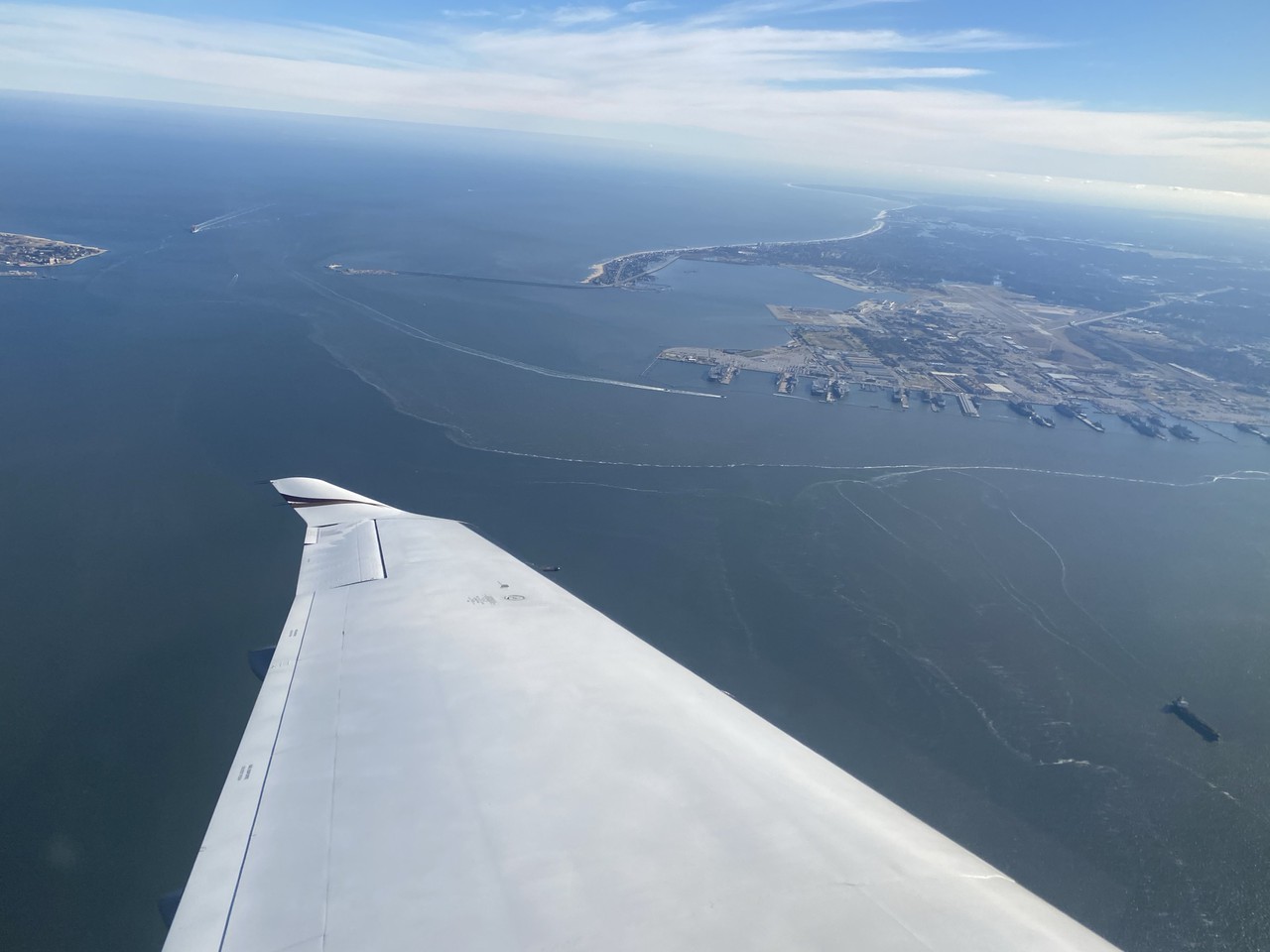 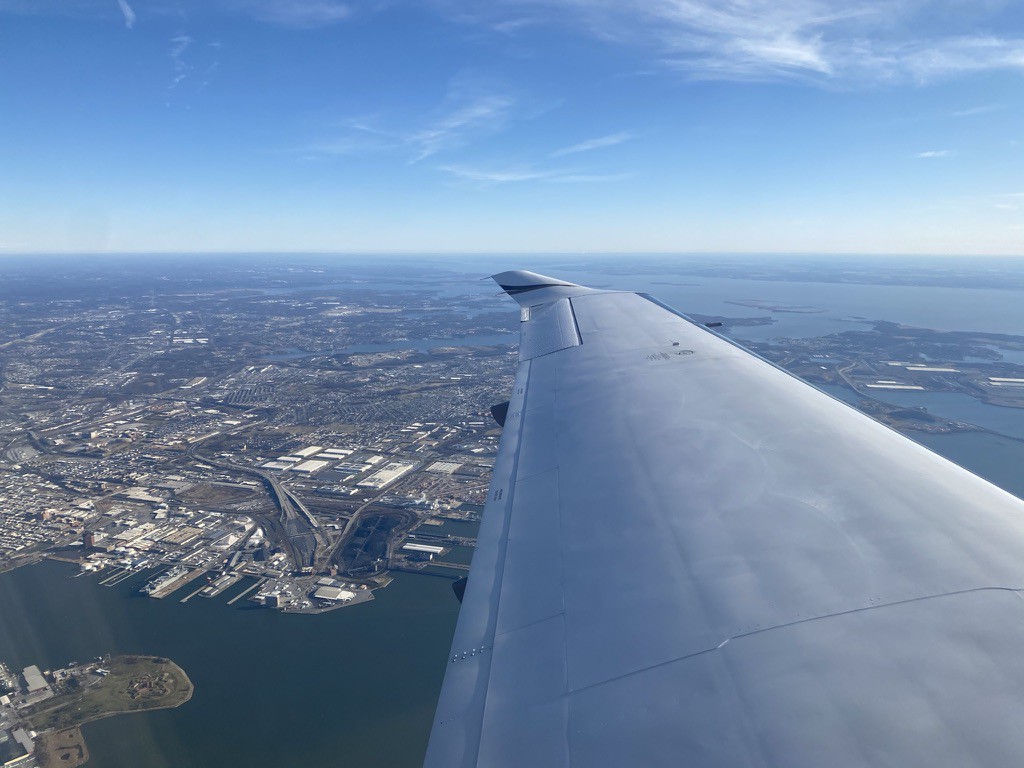 The takeoff was decently bumpy but not unmanageably so. 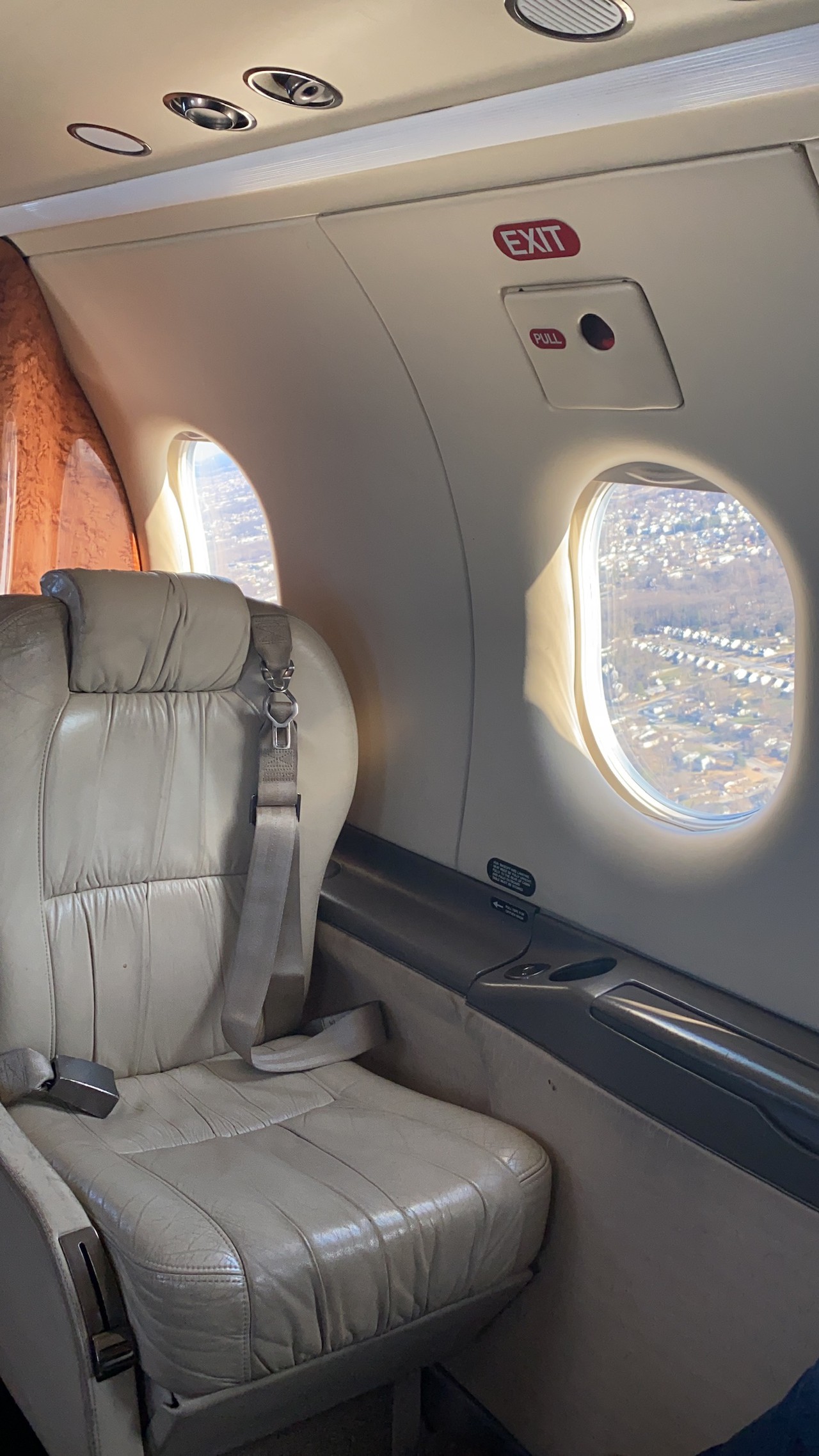 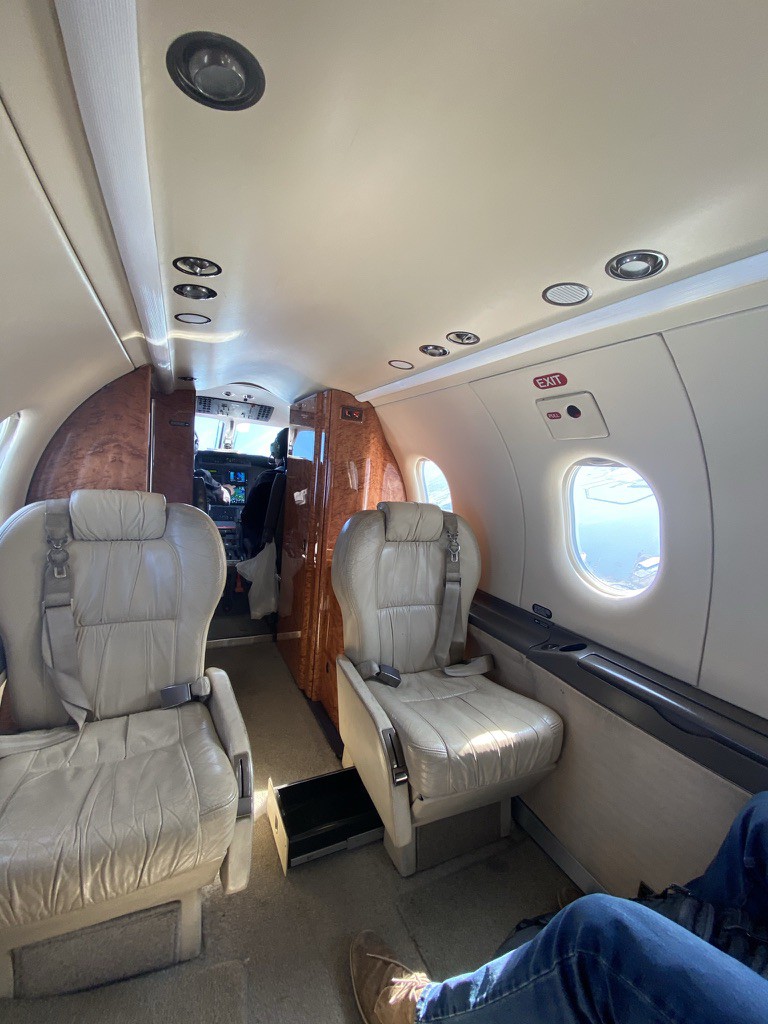 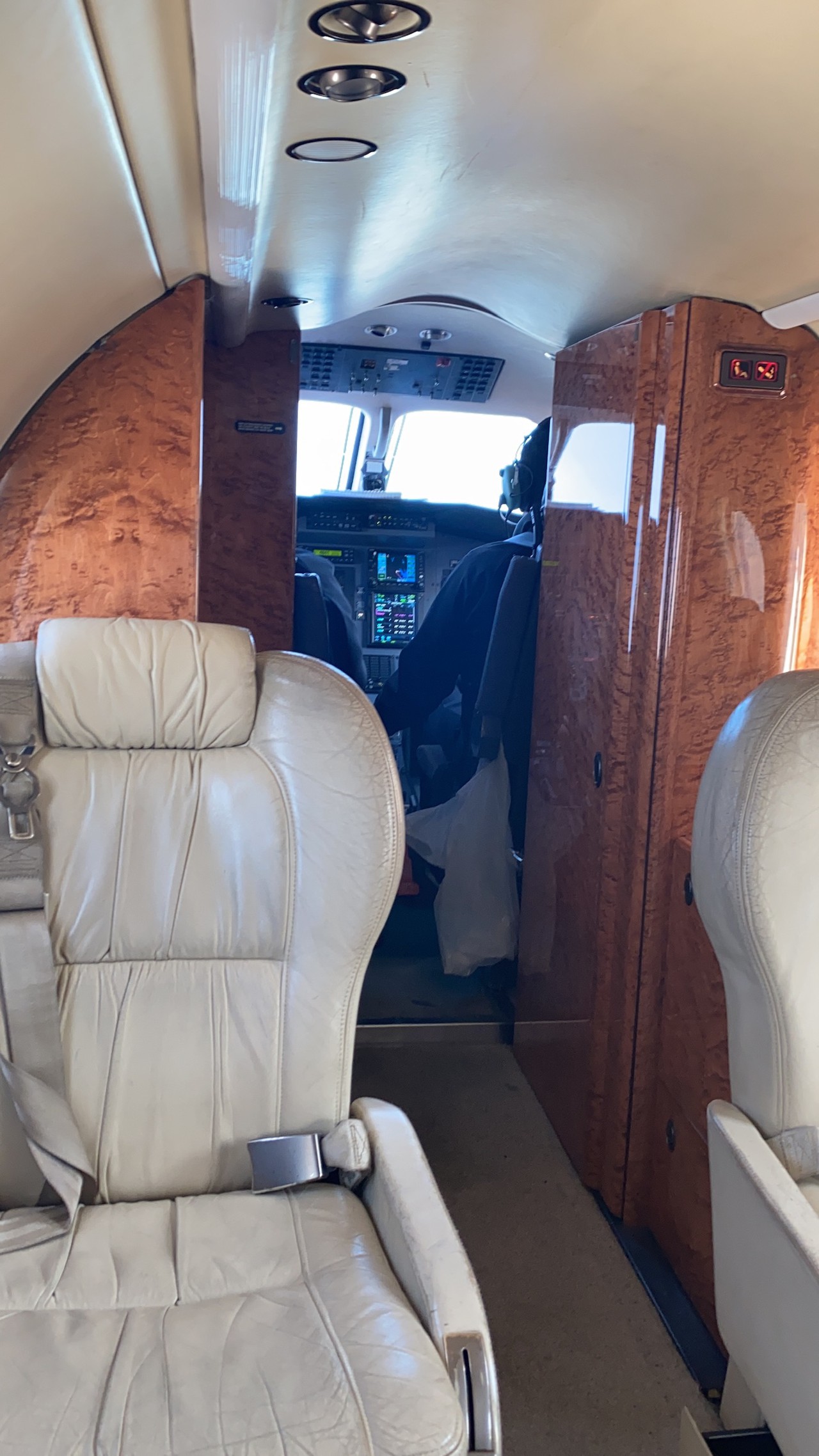 At cruising altitude, things smoothed out completely. Once we leveled off I opened up the large tray table between the two seats and did a bit of work. 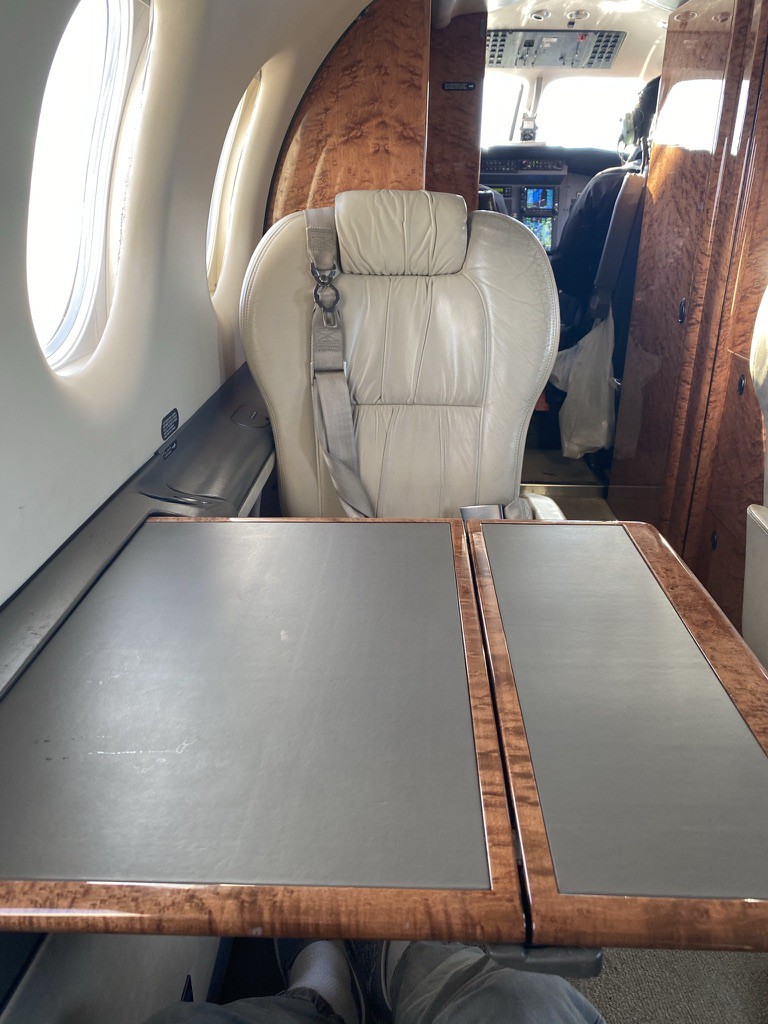 I then proceeded to recline my seat, which went extremely far back, much more so than on US domestic first class. 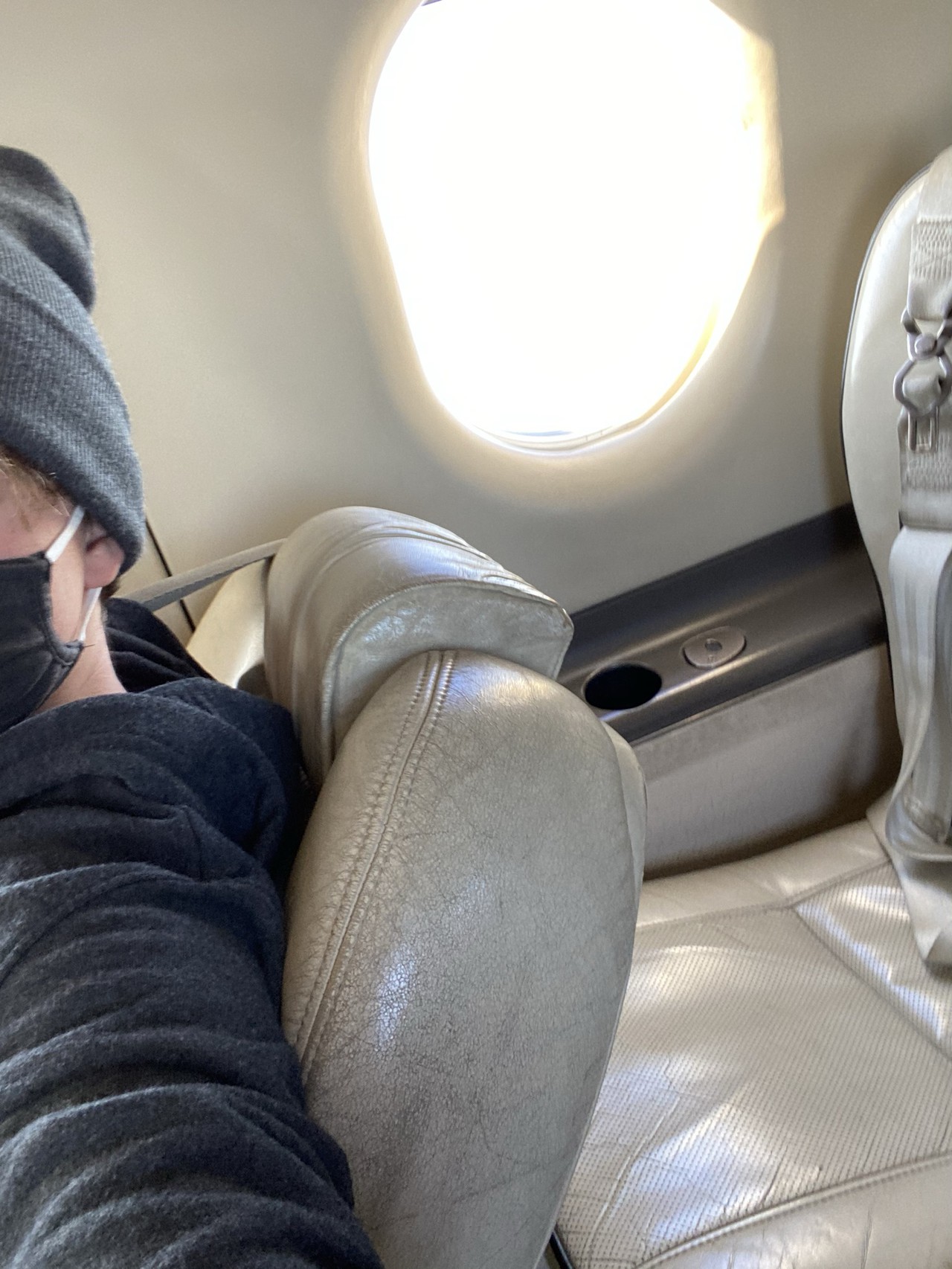 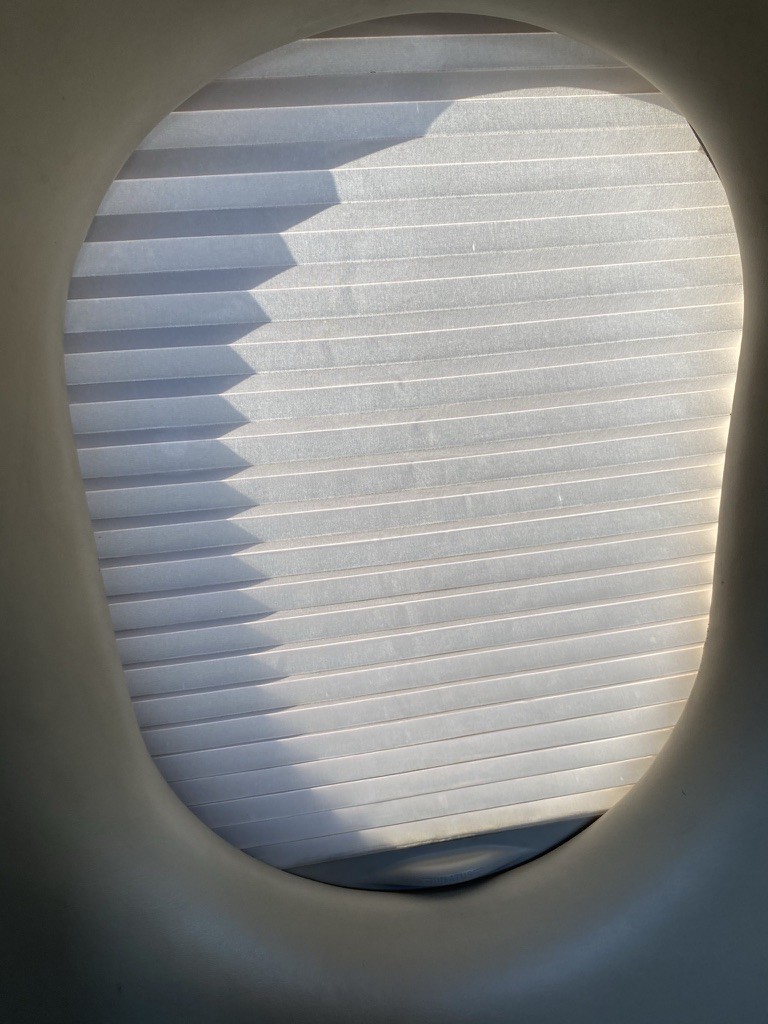 There were also really cool window blinds. The seat padding was great and made them to be extremely comfortable, though a headrest would be welcomed improvement. The aisle armrests were retractable and housed the recline button and swivel feature of the seats. There is a beverage cabinet at the front of the cabin behind the cockpit with soft drinks and water for passengers to help themselves to throughout the flight. 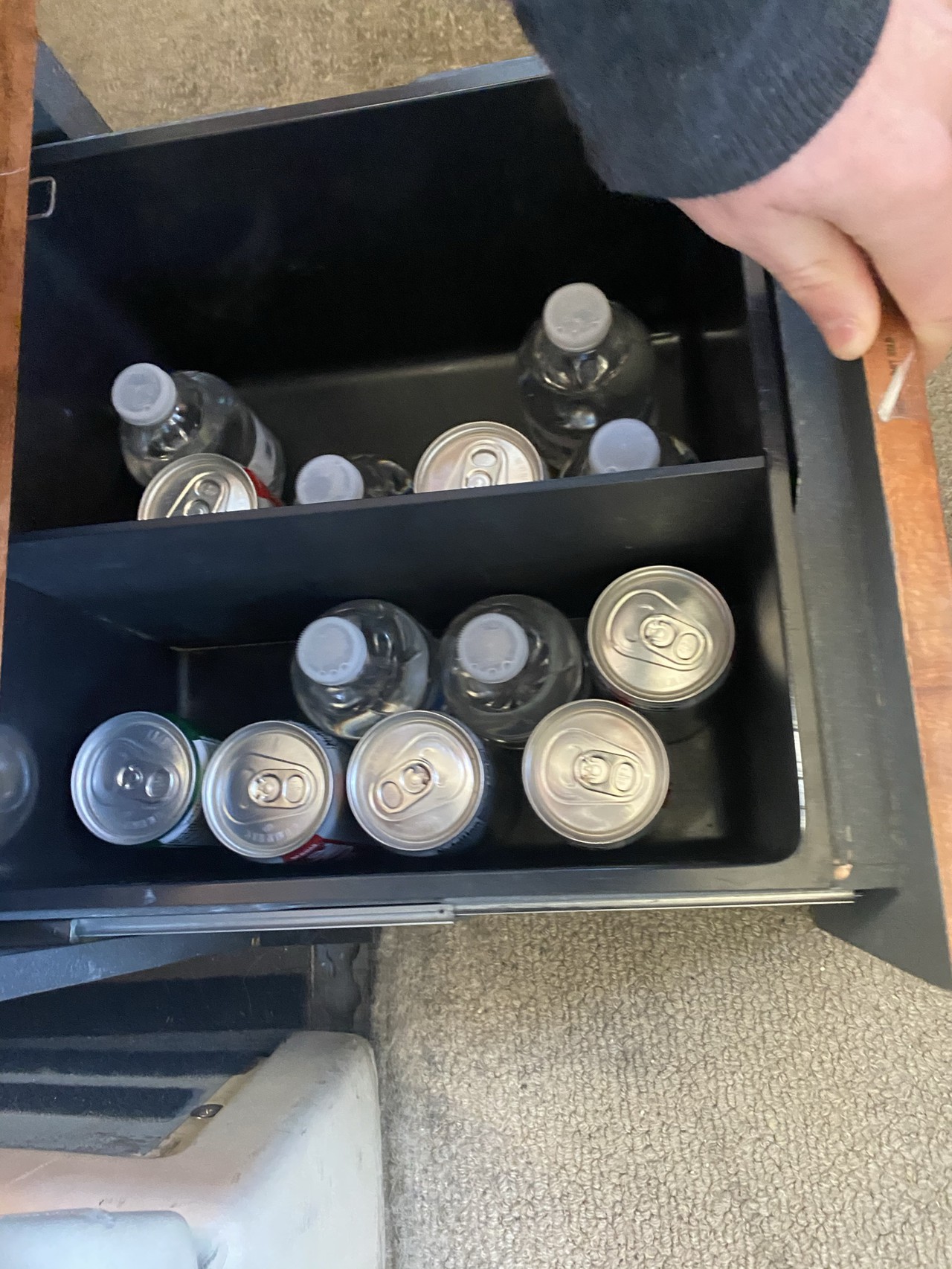 The flight went by really quickly and before long we were descending into Norfolk. This was the part where things got a little scary. As we started descending over downtown Norfolk, the ride got extremely rough with sudden drops followed by a crosswind landing. 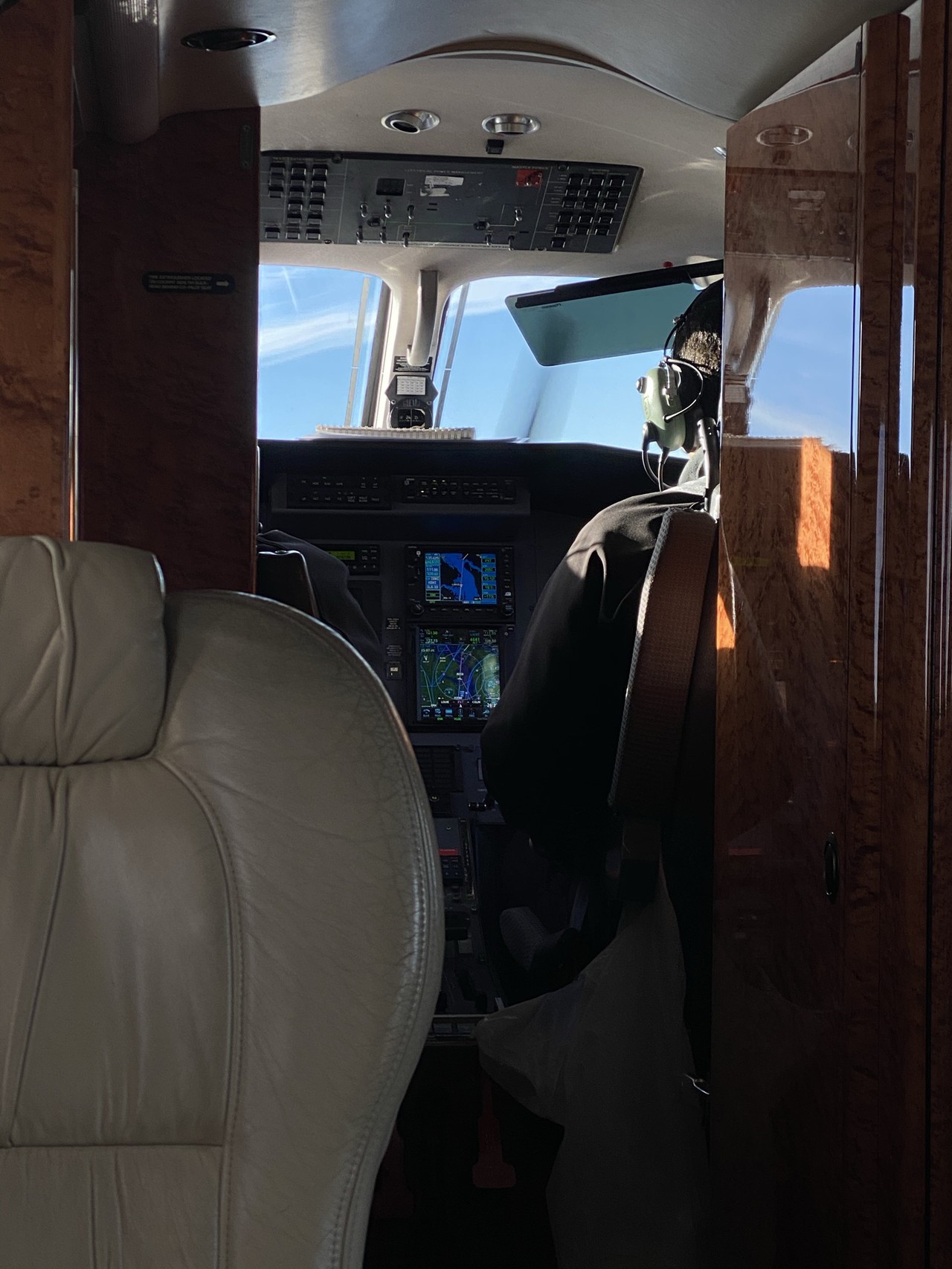 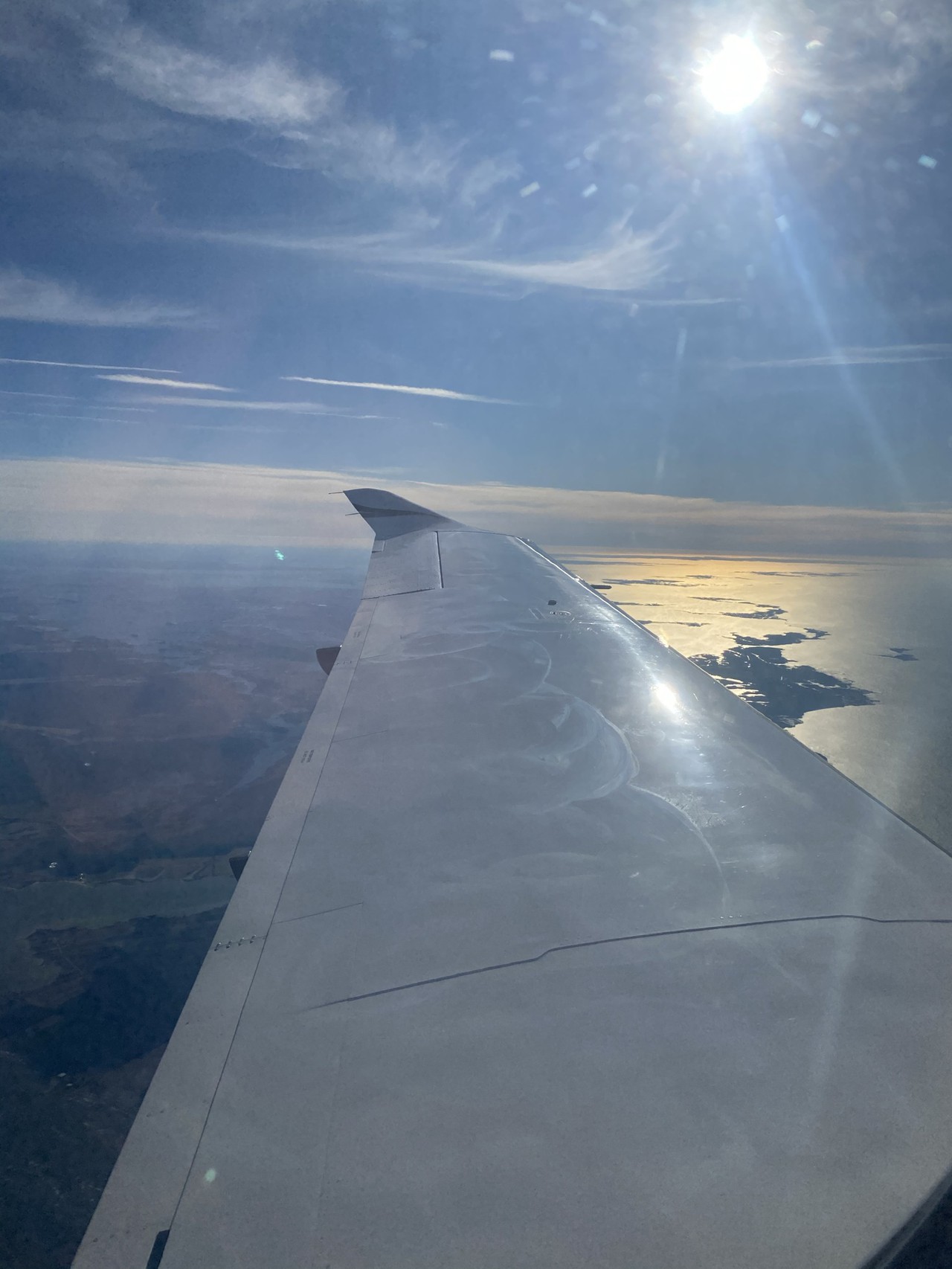 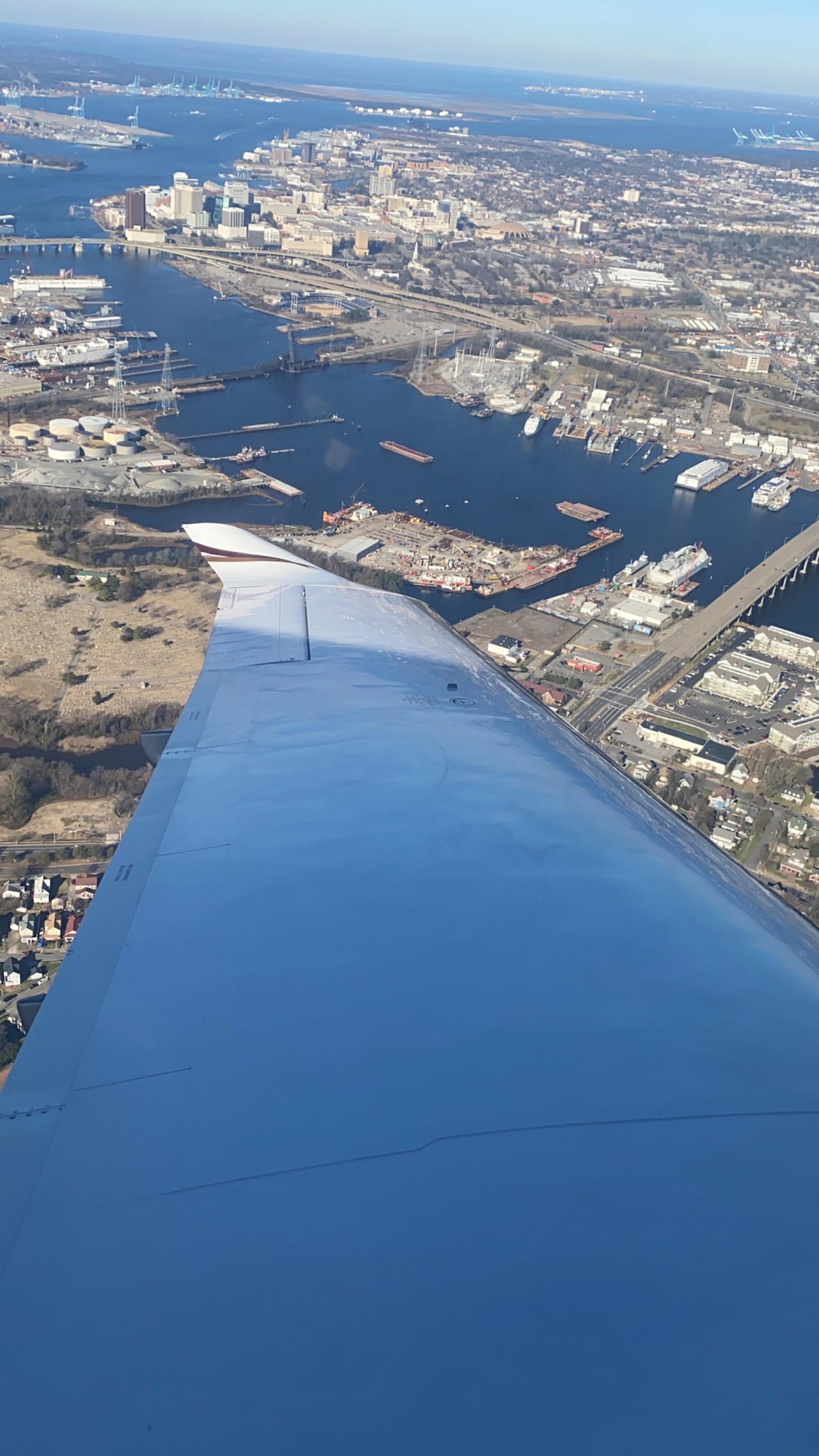 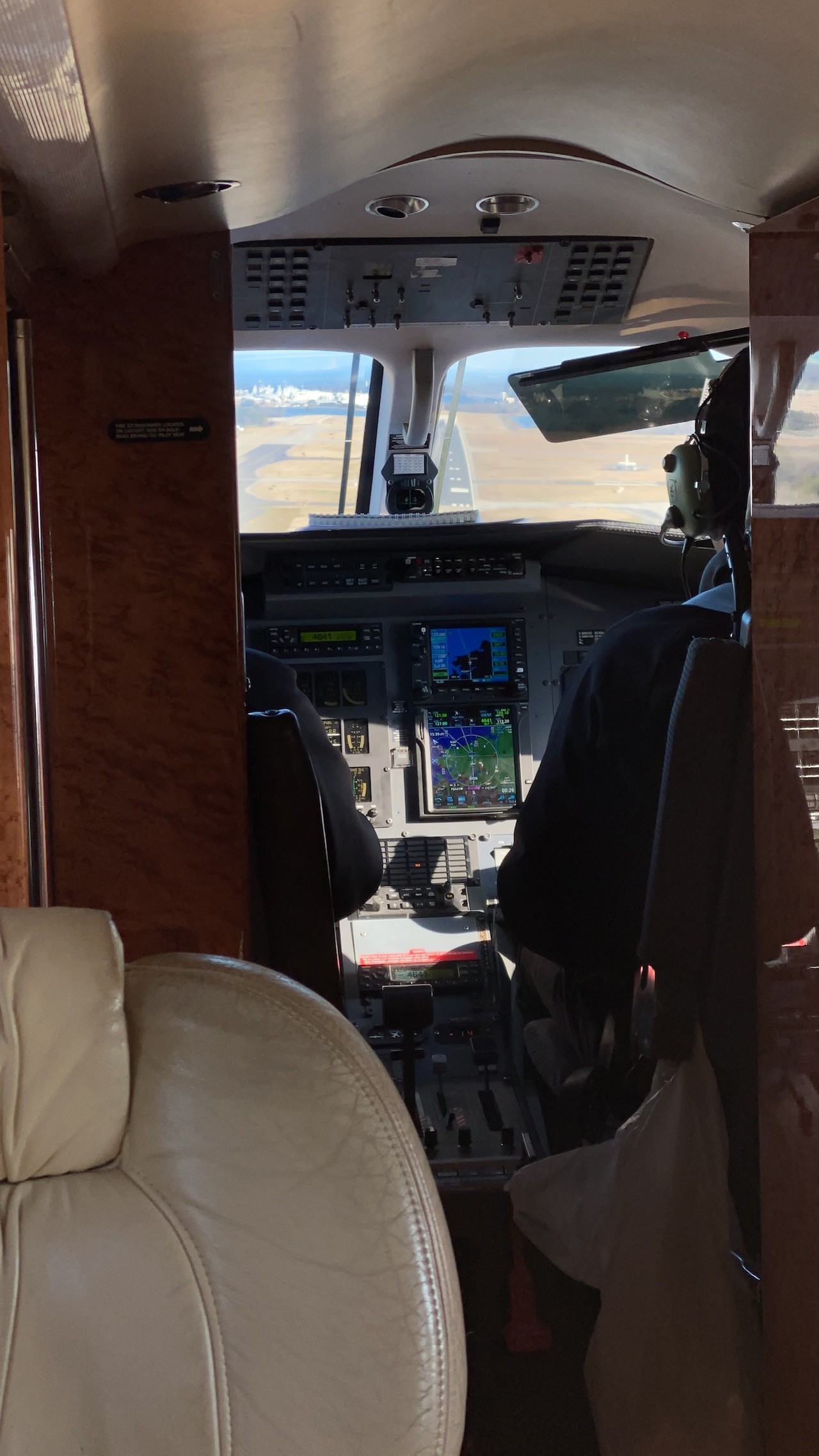 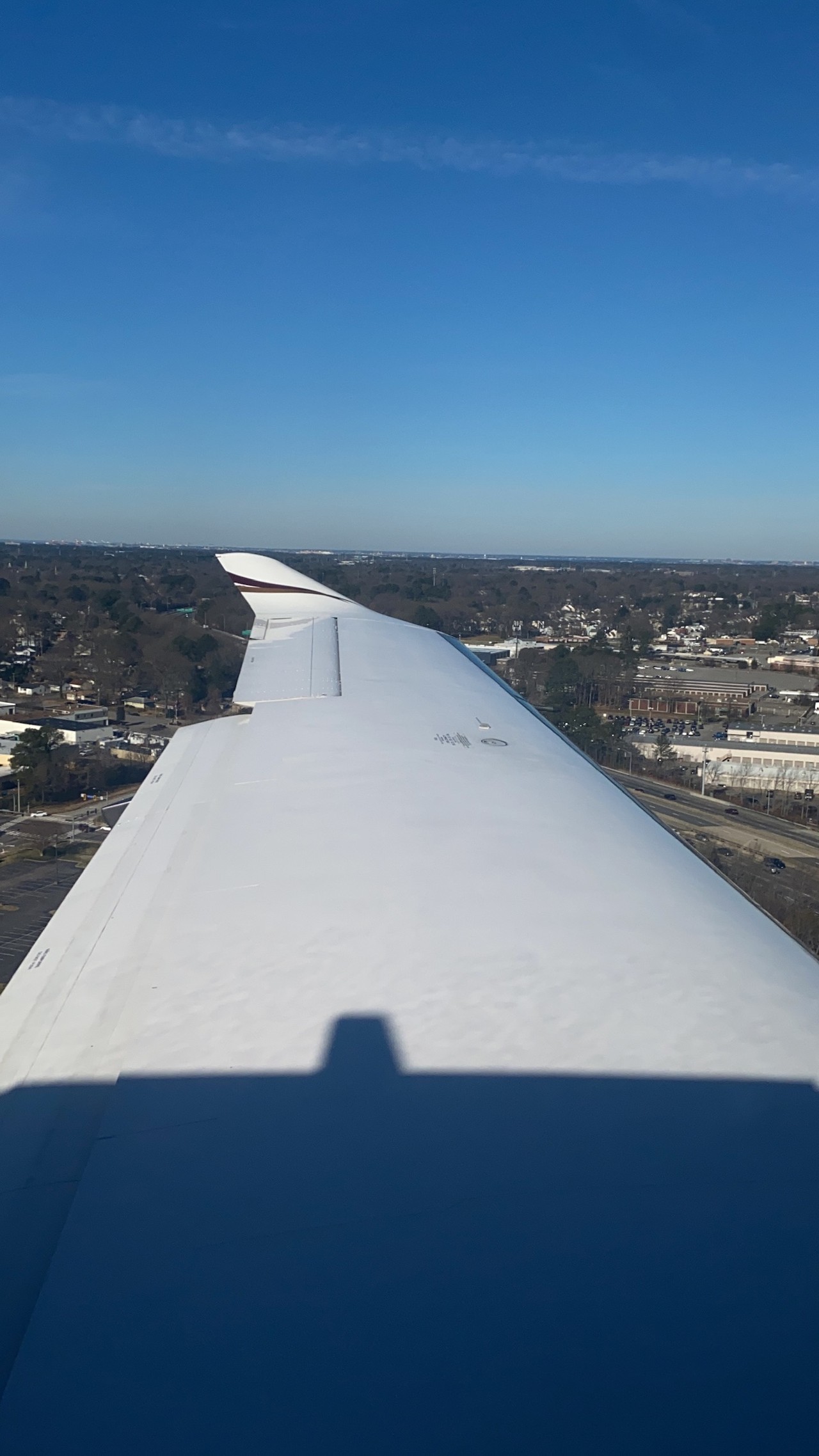 I'm usually never scared when flying but this was one of the few times I felt concerned. Despite the rough approach, the landing itself was smooth. We had a short taxi to the gate and deplaned soon after arriving. 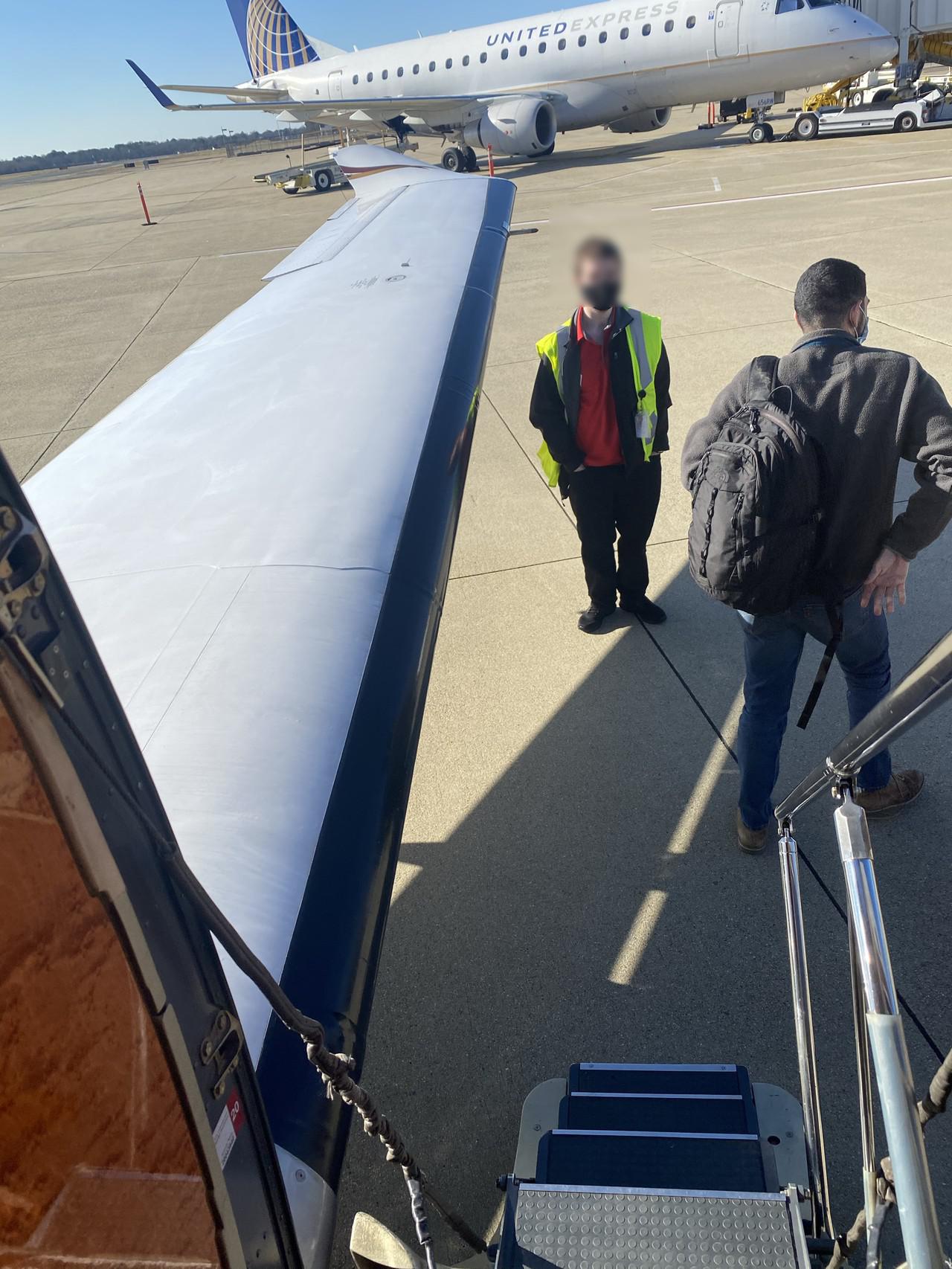 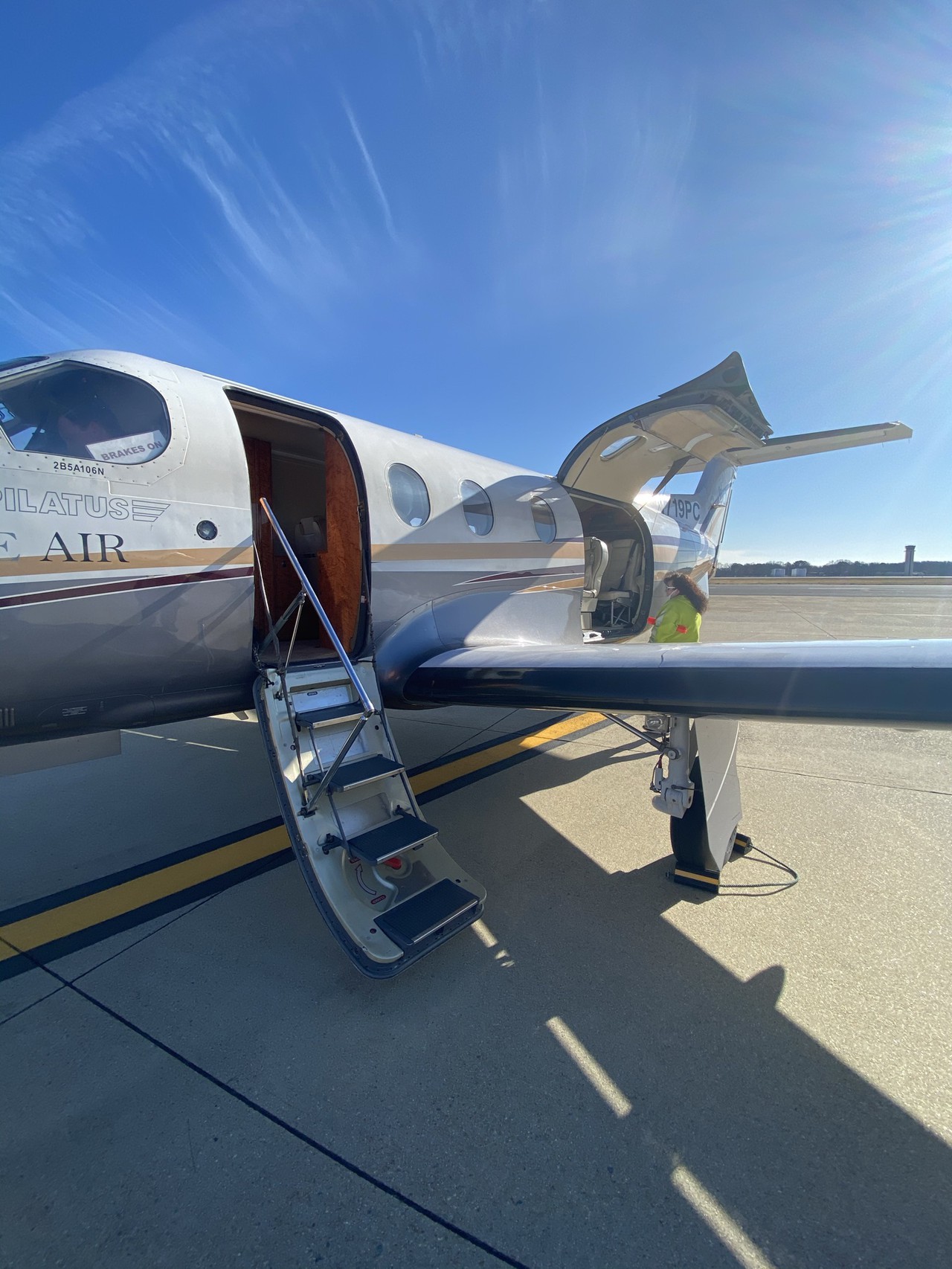 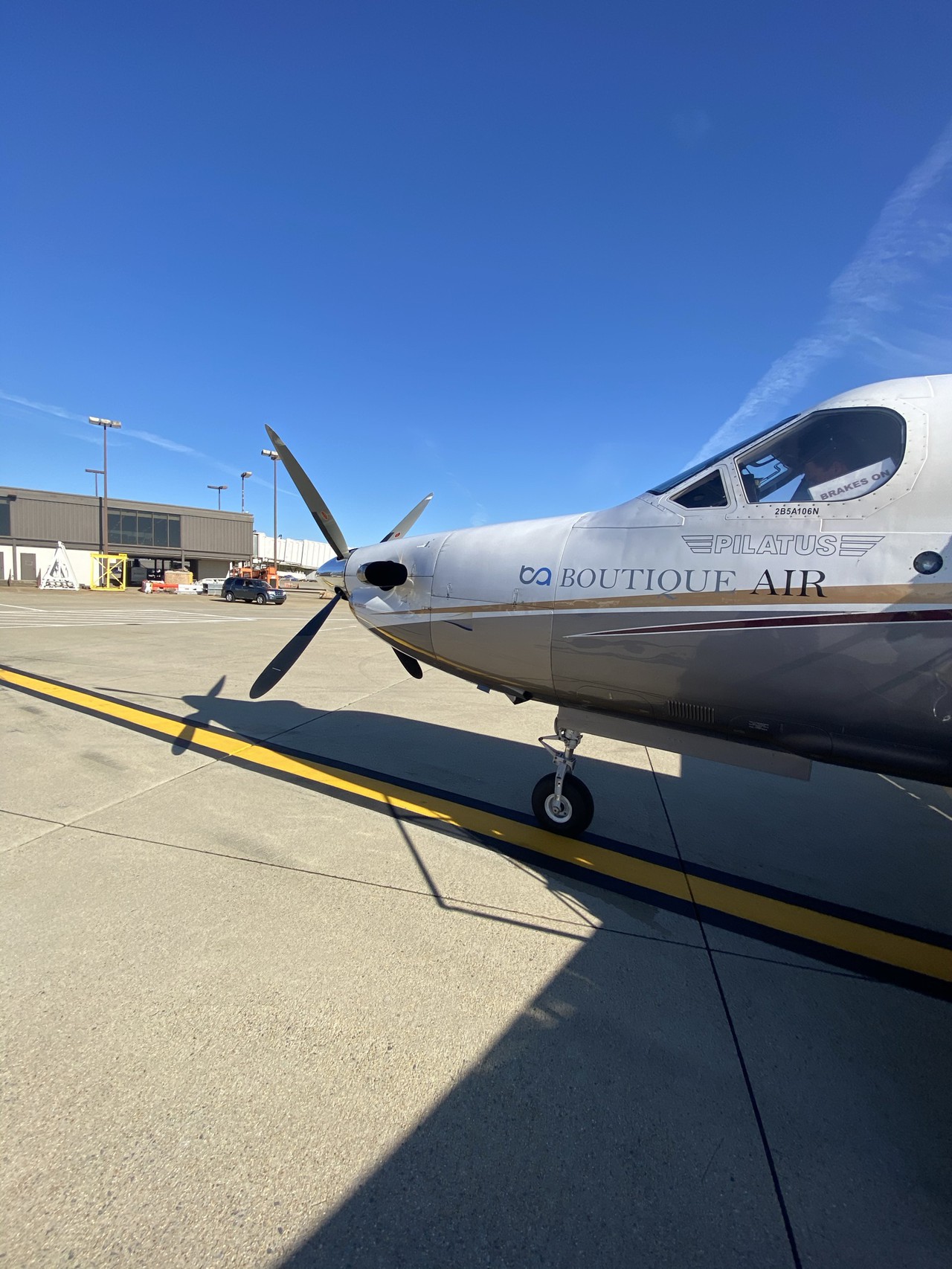 This flight will go into the records as a one time thing. While fun and cool for the photo ops, the unstableness of the small plane made me miss flying normal commercial airlines. I'd recommend flying them once just to experience it, but not anymore after that. The bottom line is that it's an adventure and if you like that sort of thing, go for it!