This FR starts where the previous one ended, at the pier of the ferry to the island of Lieyu, also called Little Kinmen. There is actually a lot to visit in Kinmen, but since I do not care for the main local drink, I was more interested by the other local feature, reminded by the pedestal of this work of art. 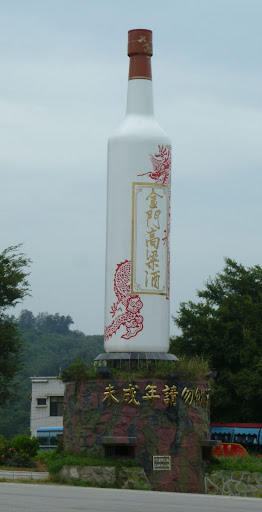 (in gold letters: Do not drink alcohol if you are underage).

If you zoom on the map at the top of the FR, you can discover this:

You cannot be closer to Mainland China when you are in Lieyu, literally speaking for some thirty years. On the left of that map, it is Xiamen, four kilometers away. There appears to be there a Xiamen Taiwan Folk Village, a theme park centered to a species presumed to be on the verge of extinction, called the Taiwanese, living in a preserve on the opposite side, and quite difficult to visit for a grassroots Mainland Chinese. Like biodiversity preserves, you need lots of authorizations to get there.

The Taiwanese clearly lost the radio wave battle in Lieyu, after spending so much in propaganda radio stations. Only Mainland's China Mobile (CMCC) and China Unicom veered to cash in the roaming charges that they expected to charge me. 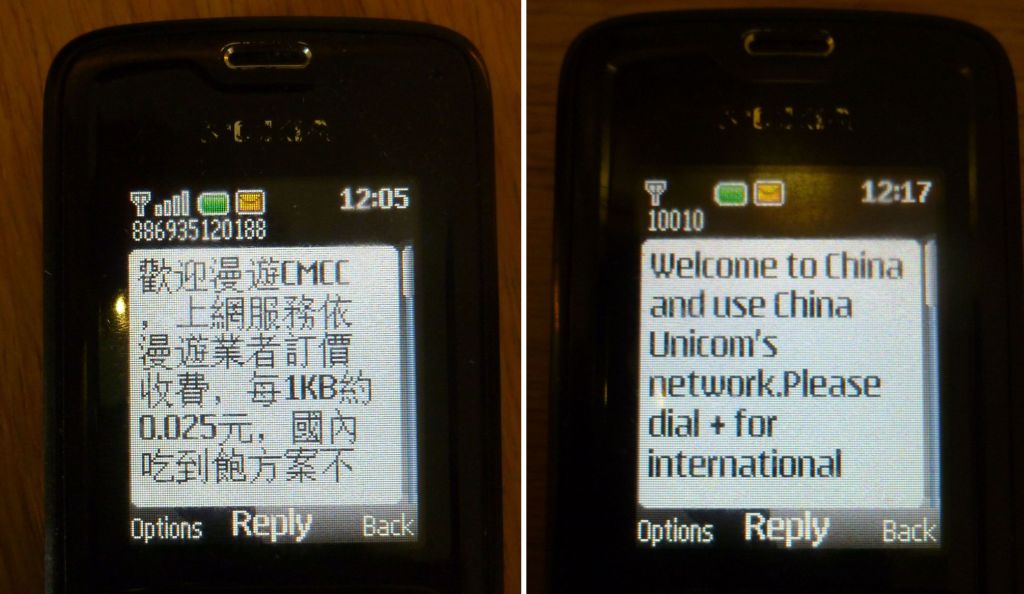 They have a strange way of deploying Welcome to Taiwan signs on the sea border here. Actually, the beaches are not very welcoming, and the Taiwanese have not understood the basics of the development of a seaside resort. How can you do when landing in Lieyu with your paddle boat from Xiamen which is just in front?

They really blew it up. 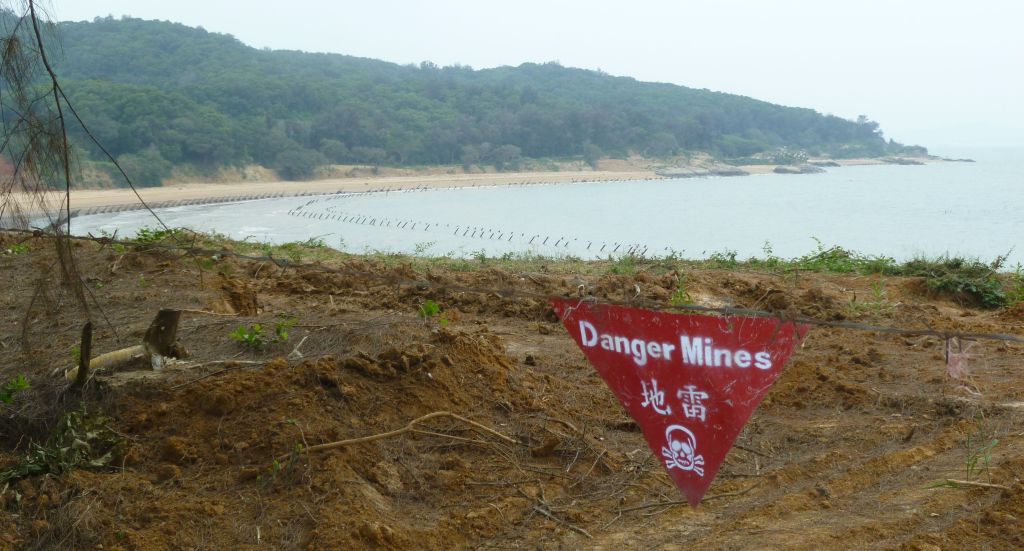 Apparently, someone had recently explained to the Taiwanese that the mine fields which surround Lieyu were bad for tourism, and the decided to change their land use plans. There are therefore all around the island unusual picnickers, with all their camping gear, but their frying pans are not the justification of so many ambulances parked around.

They are very polite, and apologize for any inconvenience.

Removing landmines is one those tasks which are repetitive, monotonous and nevertheless strangely stressing. This NCO on the left came up to me and asked very politely (the Taiwanese military are really very polite) to please stop take pictures, because it was bad for his men's concentration. 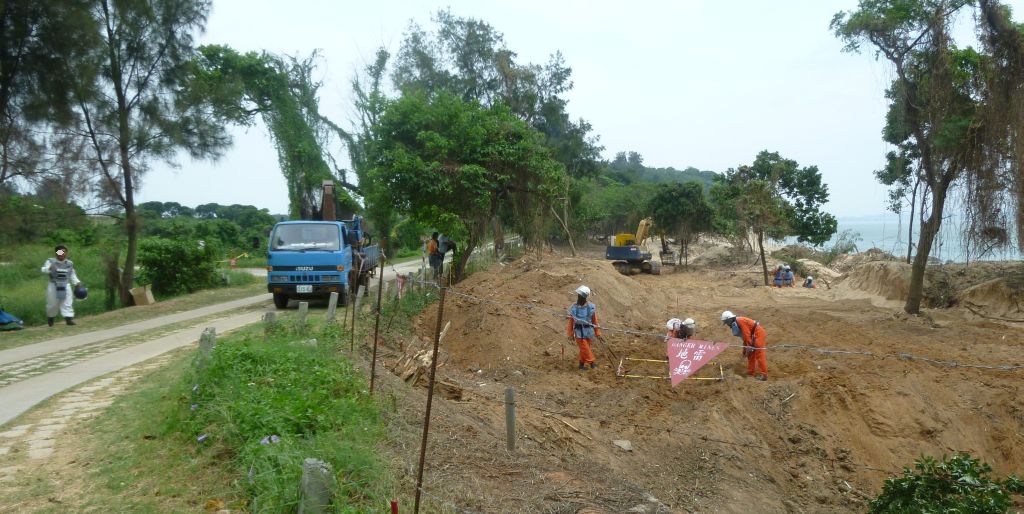 For the record, all the beaches have recently been officially declared clean of landmines. You are welcome to go and check that by yourself.

The war is over and one of my Taiwanese colleagues spent his military service waiting here for an enemy that all felt would not come any more, in more or less the same attitude and the same usefulness as this bronze statue. On the other side, in Xiamen, they built luxury condos and offices with a view on the sea and Kinmen. 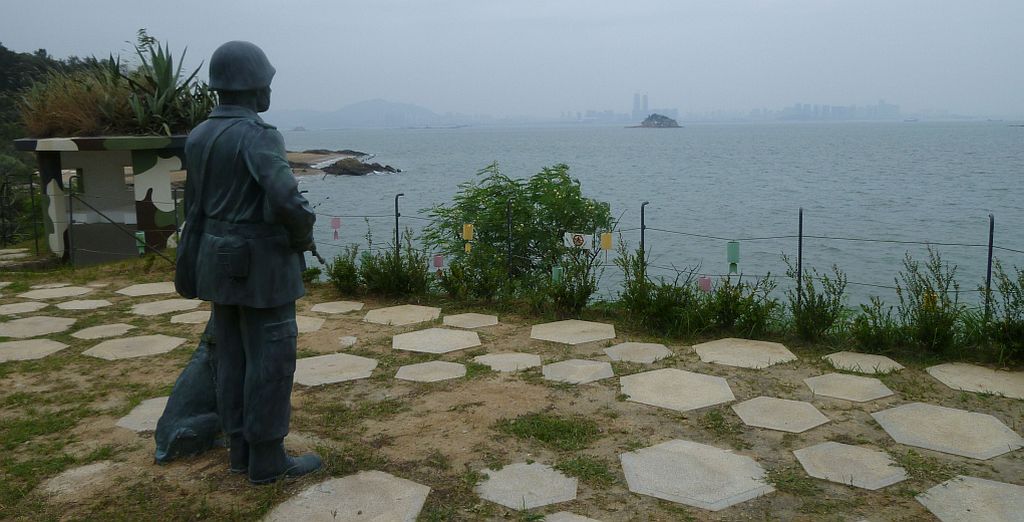 Let's stop here my tourist bonus (or tourist office leaflet, according to some), and start at last the FR, which is supposed to be focused on air travel. I can't quite avoid mentioning local history, but you knew what to expect when you opened a FR signed Marathon.

It had been quite a while since I wanted to try Taiwan's E-190, a novelty for me, like this one landing in TSA.

Note by the way that much like that of the B737, the main landing gear of the E-190 remains visible when retracted.

Mandarin Airlines was at the time the last of the four major domestic Taiwanese airlines which was missing in my shopping list (Daily Air, the fifth one, which I eventually flew with, operates very low traffic routes with Do-228s).

Historically, Mandarin Airlines was created to counter Mainland China's threats of reprisals against any country where a China Airlines (Taiwan's flag carrier) would land, by cancelling their landing rights in China. Mandarin Airlines did not have China or Taiwan in its name, did not bear Taiwan's flag, and was therefore an acceptable face saving substitute. Symmetrically, you could see in Taipei planes of Japan Asia Airways, whose logo looked strangely similar to that of JAL.

The China-Taiwan relationships improved, and China Airlines' planes now land in China (and US, Japan, etc…) without a Taiwanese flag, JAL closed its subsidiary JAA which had become useless and lands its own planes in Taipei (and ANA started landing there too).

Mandarin Airlines, which used to have wide bodies, now only has E-190s plying domestic, as well as cross-Straits and international routes (here too, in politically correct parlance, a flight to Mainland China is not international). 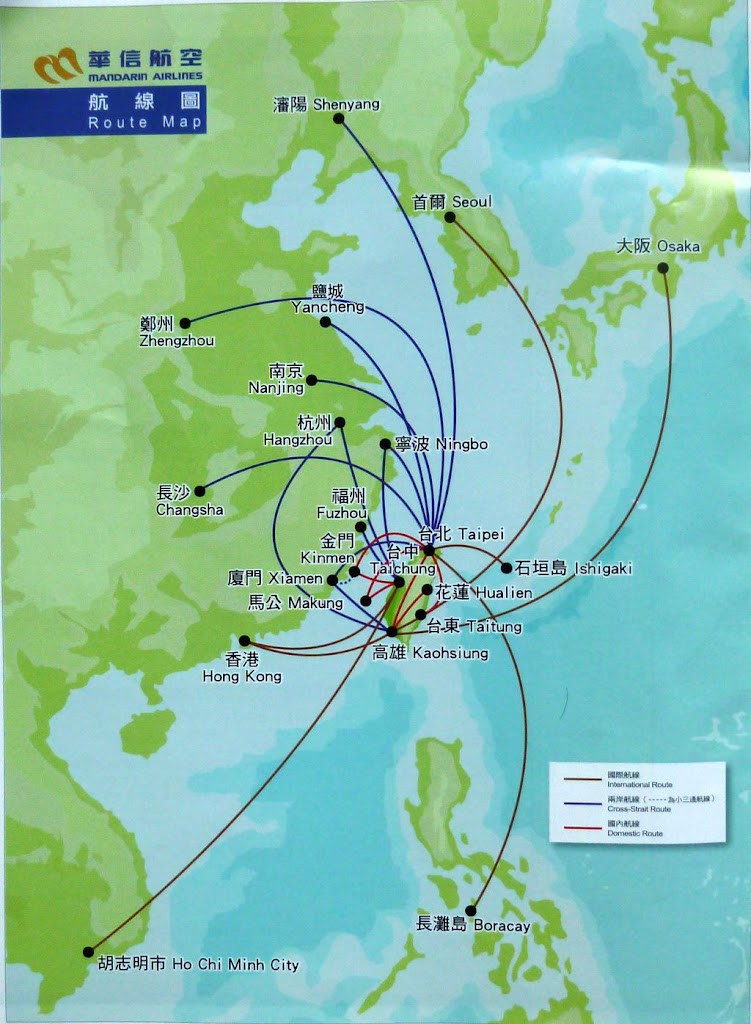 If you can't read Chinese, you are not supposed to understand the text in parentheses in the legend

- - - route via the Three Mini-links. The three Mini-links are the ferry links between the Taiwanese islands of Kinmen and Nangan to Xiamen, Quanzhou and Fuzhou on the Mainland, which were the first direct connections giddily opened in 2001. Mandarin now operates flights to Xiamen, but reminds that it is also possible to fly to Kinmen and take a ferry from there to Xiamen. It is much cheaper and I did it a couple times.

Arrival at Kinmen's airport: note the giant boards on both sides, celebrating the centenary of the creation of the Republic of China in 1911 by Sun Yat-Sen. 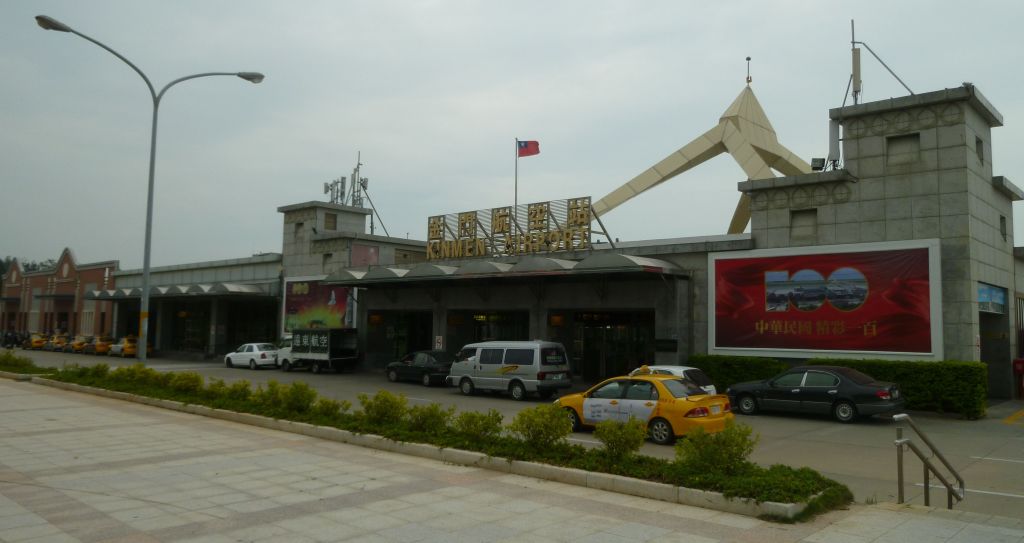 The inside is quite wide, because the traffic which is domestic only is significant. On the right, a free internet access. There are free telephone charging stations on another side of that pillar.

All flights are one time that day. There are a few seats available on my flight, but both later flights are booked full.

Check-in is very quick, the employee only asks if I want a window or aisle seat. Like in TSA, she tears off slightly the stub of the boarding card, to make it easier to separate it when boarding. Note that boarding is at 17:35 for the 17:45 flight: no time is wasted!

The plane spotting opportunities are limited to that Uni Air MD-90 from the restaurant landside. 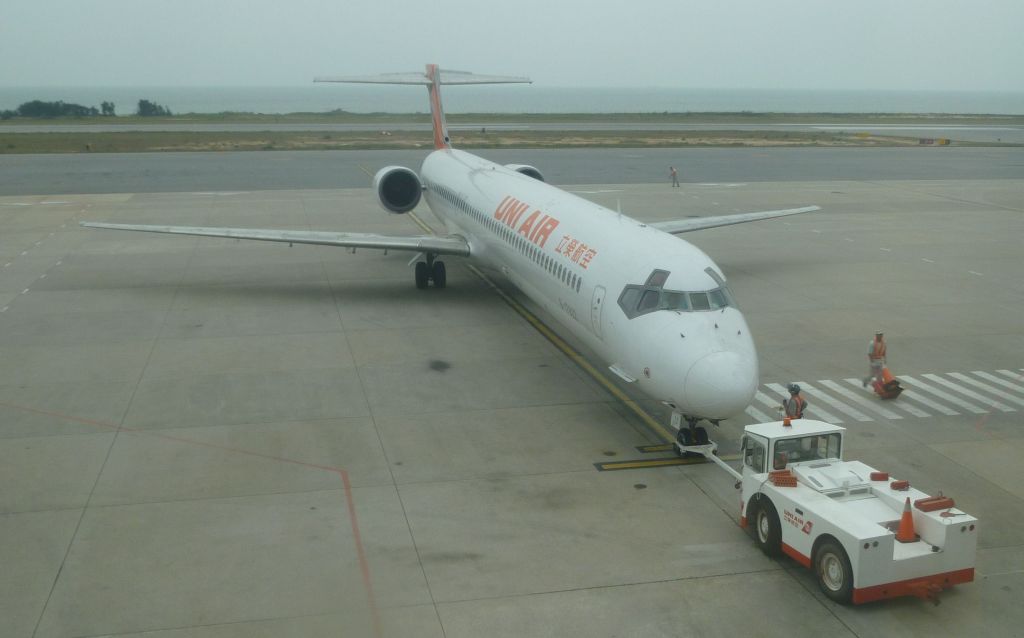 The announcements in that airport are in Mandarin and Taiwanese only, and hardly ever stop. You have to be careful to catch the announcement of flight 1272 of Huaxin Hangkong Gongsi (Mandarin Airlines), especially since at the gate, only Huaxin towards Taipei is displayed, without a flight number. 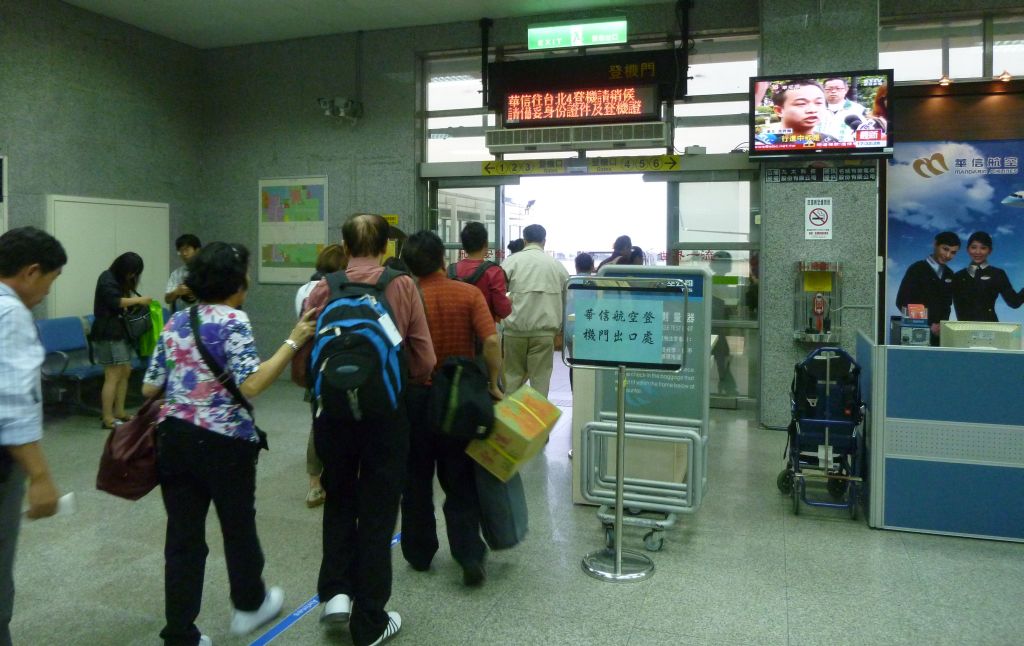 I was frustrated not to be able to take a better picture of that decorated E-190, this was the first time that I was seeing it. 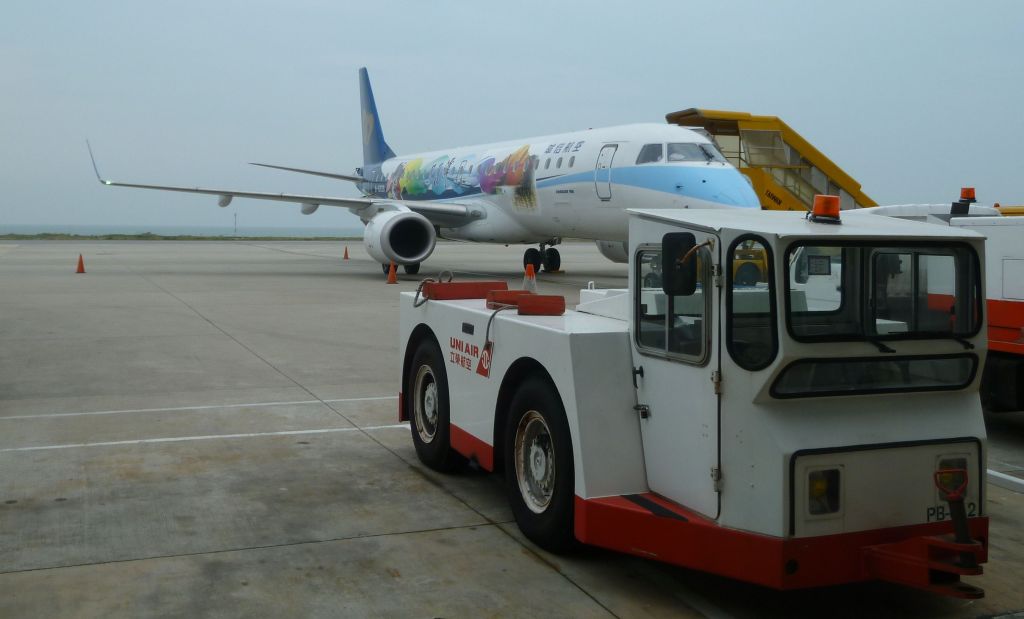 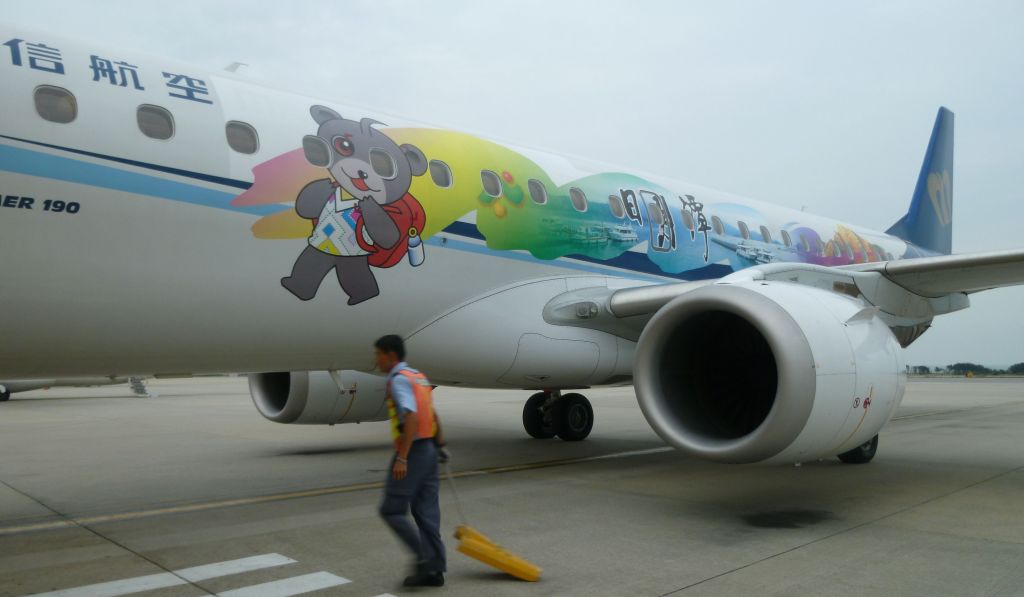 2+2 seating, with adequate comfort and seat pitch. Note that there was another foreigner, here when leaving the aircraft. 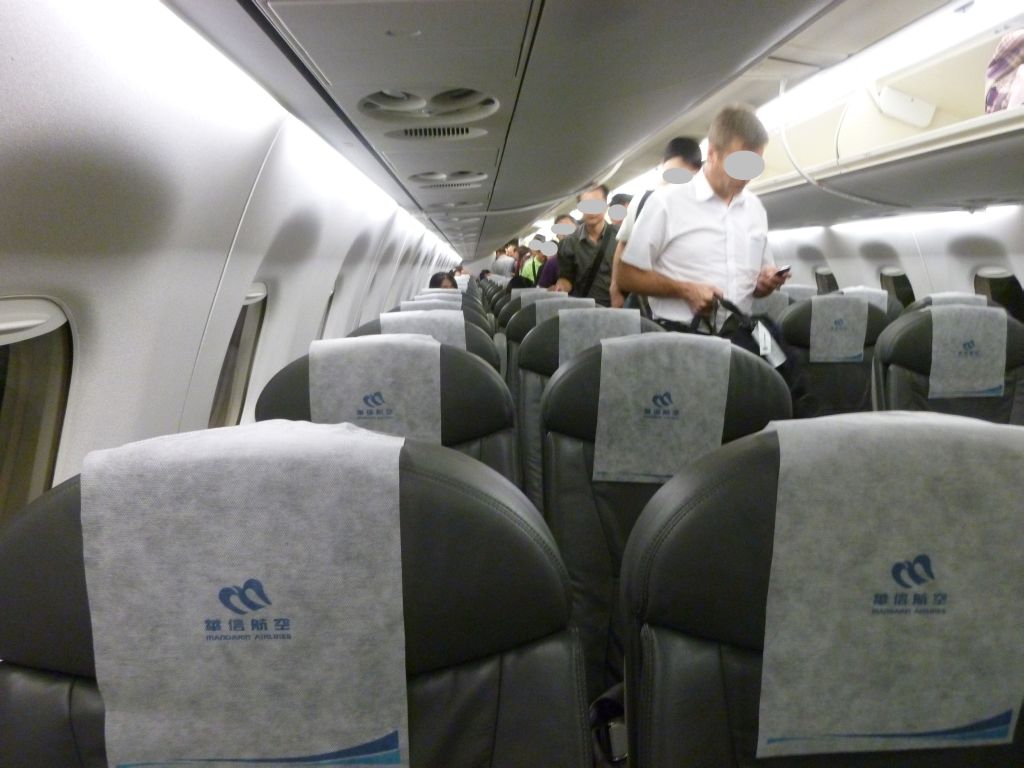 The drinks offering is the same as that of FAT, which must have negotiated a bulk deal with the same supplier. The grade is therefore the same, for the same non-quality of the stuff. 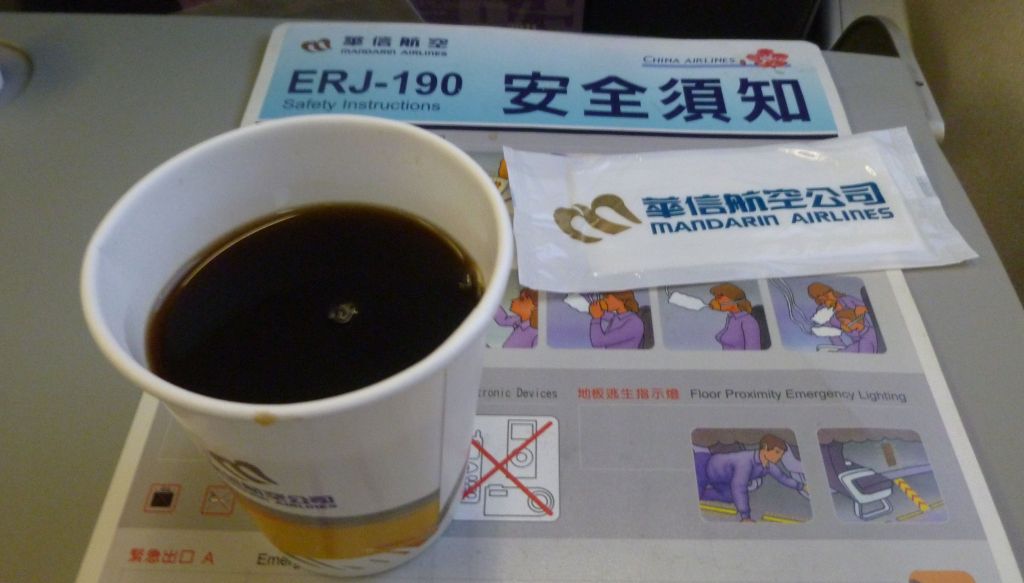 It was a rather uneventful flight, although the captain claimed that there were turbulences (pilots are excessively sensitive, nowadays). The view on Taipei at night is always spectacular, but my camera is not sensitive enough to capture it, and I was too close to the seated flight attendant, too. 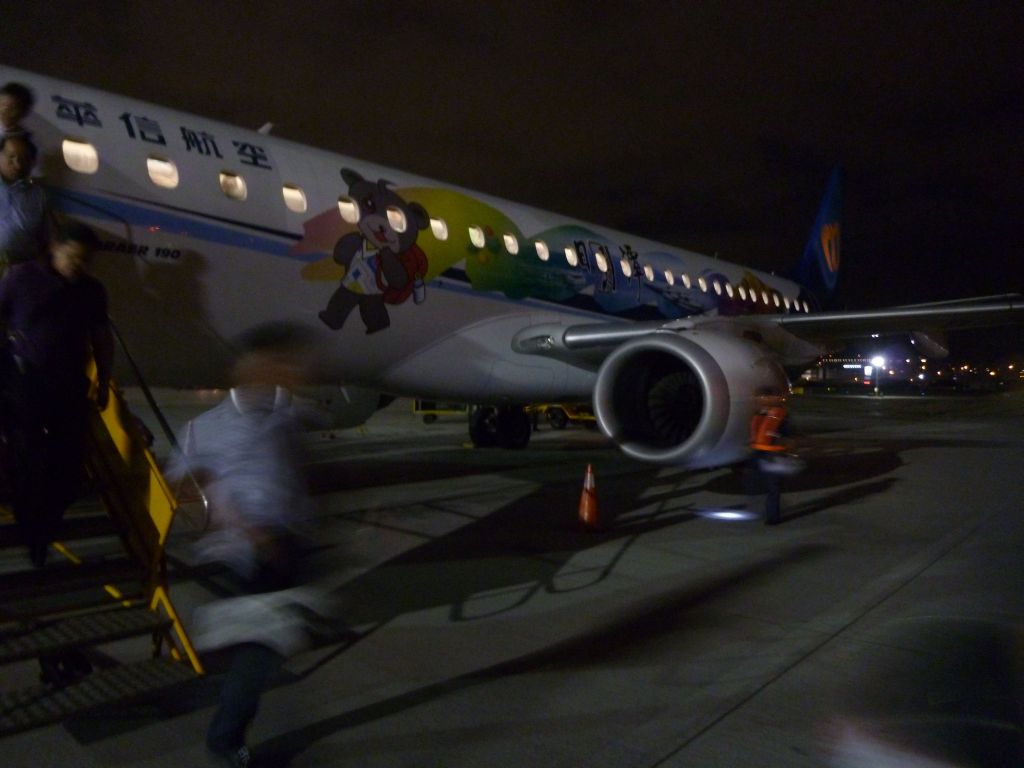 Passenger bus transfer; we are relatively far from the terminal.

There is a direct bus from TSA to the vicinity of my home, but the route is a very long loop, so that it does not make sense to take it the reverse direction. 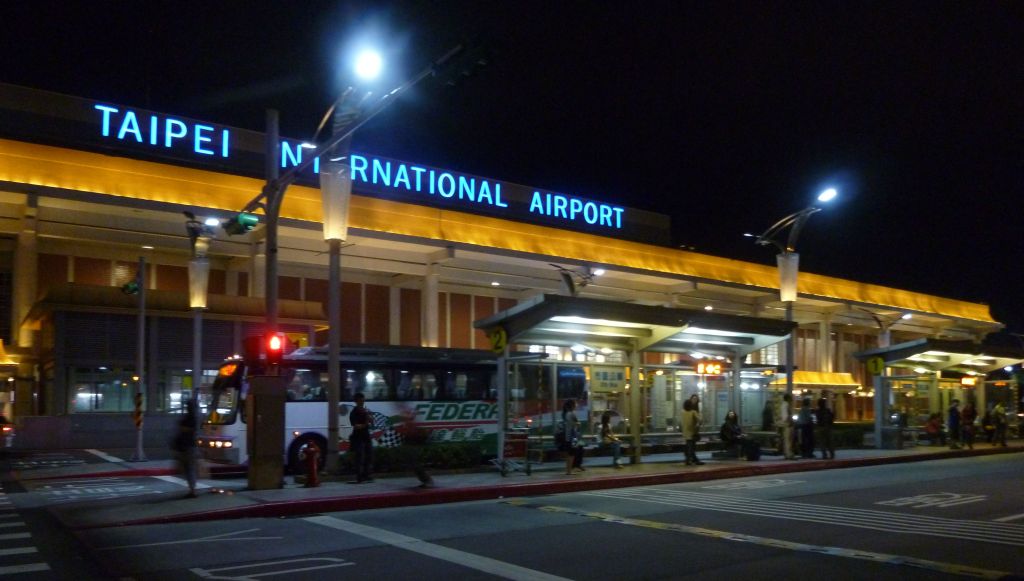 The line number, the waiting time and the number of stations that the bus has yet to serve are displayed.

Note the poster on the left, encouraging passengers to leave their seat to pregnant women. They do not really need the encouragement: few people dare using priority seats if they do not need to. 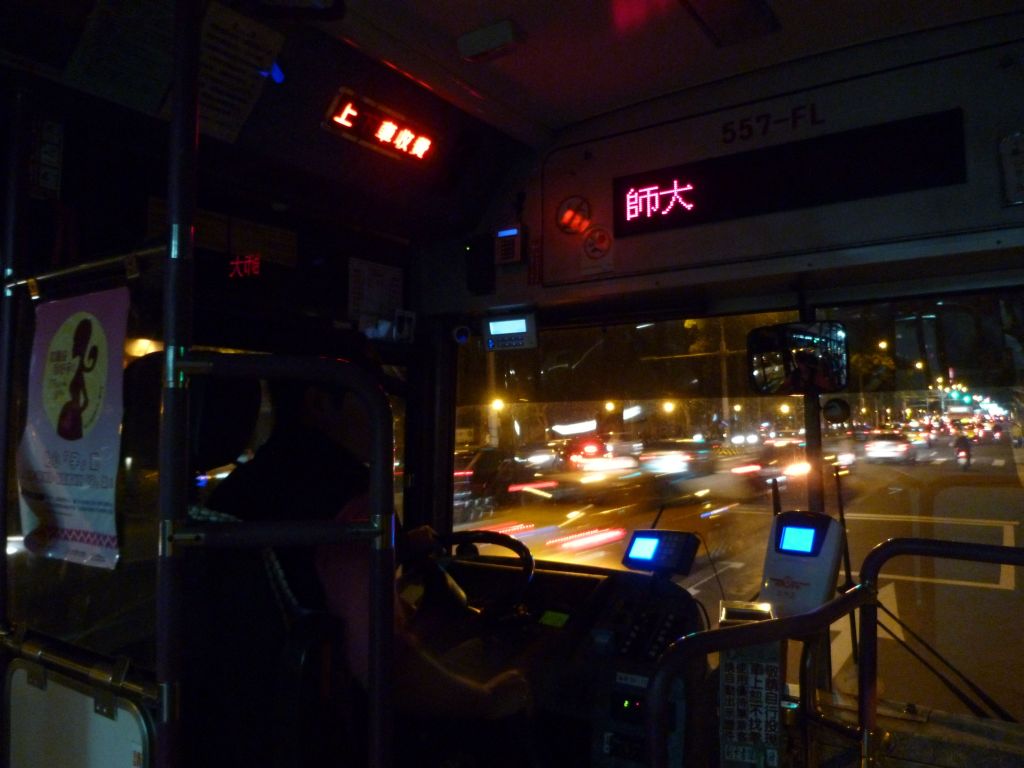 By the way, in Taiwan, there is no penalty in case of no-show. I had checked the weather forecast the day before. If it was bad, I would have stayed in bed, without any worry about the 2050+2086 TWD (slightly more than 100 EUR) that I had spent, and could use at a later date.

The contributors of Flight-Report published 11 reviews of 5 airlines on the route Kinmen (KNH) → Taipei City (TSA).

The airline with the best average rating is EVA Air with 8.1/10.