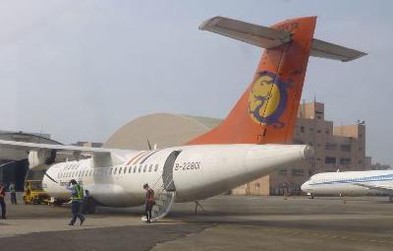 By marathon GOLD 2650
Published on 20th October 2013
This FR was originally posted in my native French, in the first couple months of Flight Report's life, so that very few people ever read it. I expanded it slightly with a tourist bonus on the destination.

Like ORY (Orly airport) in Paris, Songshan (TSA) is Taipei's domestic airport, although it also has some international flights. It was caught up by the urban sprawl and can be reached by a medium capacity driverless subway technologically identical to that of ORY. The similarity ends there. First of all, Songshan is really in the city center, only 4km from the central station which is arguably the zero point in Taipei. That would place it inside Paris's inner ring expressway. The price of the subway is not the same either: 22 TWD (0.6 EUR) from my home, versus 10.50 EUR in Paris. For 22 TWD then, I reached this station with a very Jules Verne-like decoration. 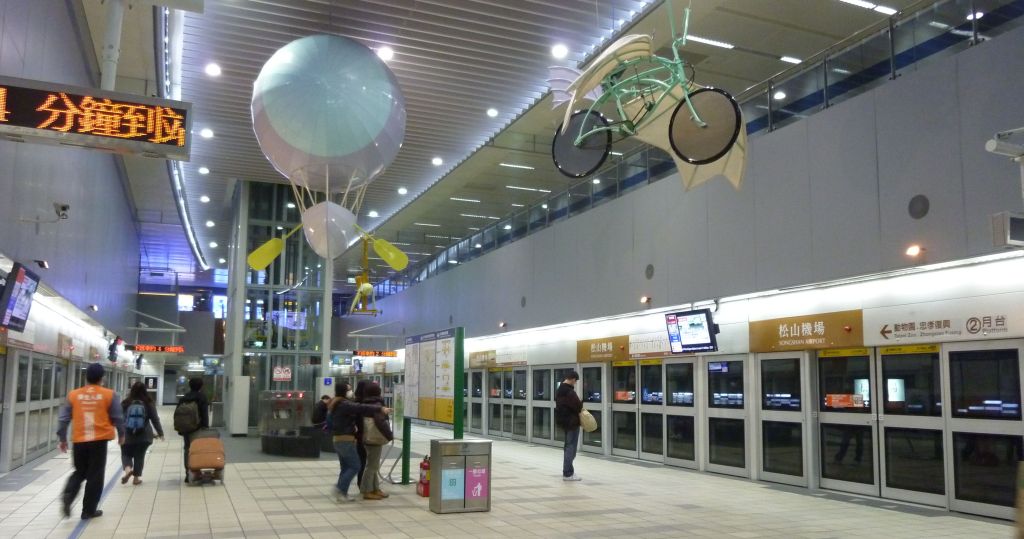 .. and I got outside next to the terminal. This big building is Terminal 1, oversized in comparison to its traffic since nearly all international flights now land at the new airport (TPE). It really has a 1950's design, including the control tower on the far right.

On the far left, the blue building is Terminal 2, brand new because it had just reopened after a major overhaul on 29 March that year. The opening of the Taipei – Kaohsiung high speed line reduced the traffic, but there are still many flights, especially to Taiwan's remote islands.

It was not crowded on that Saturday morning for checking in Flight GE505. 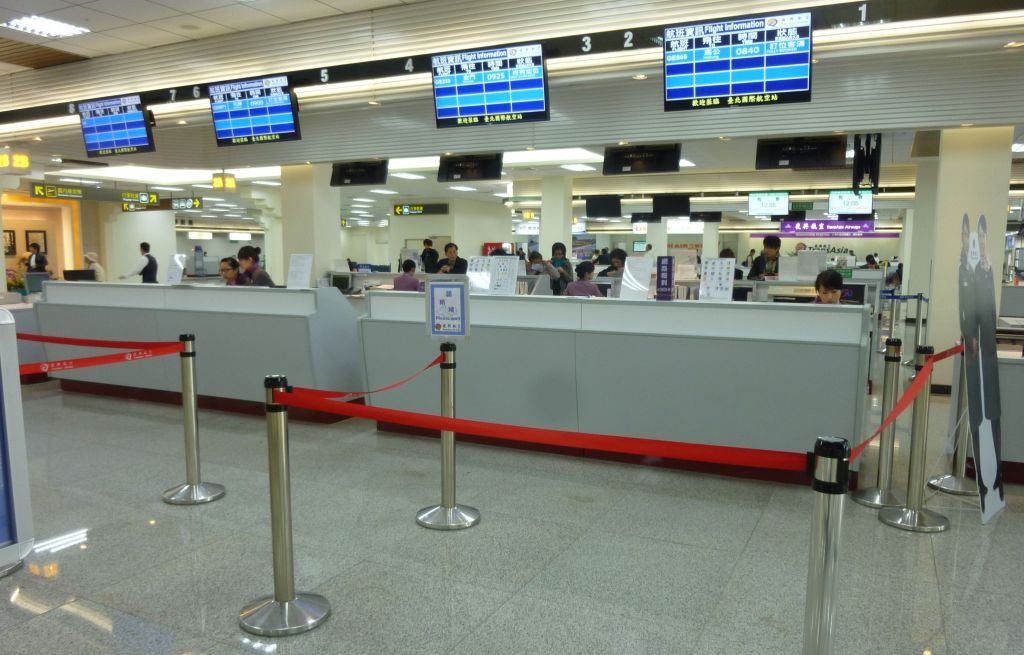 The flight was nevertheless full 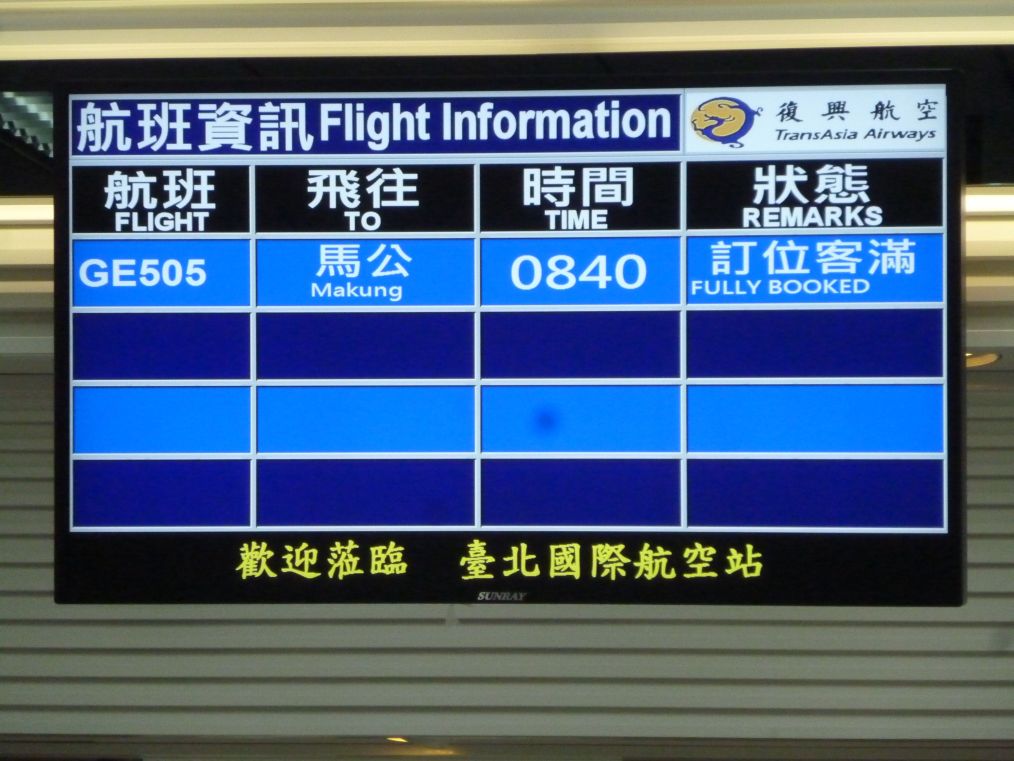 By the way, did you notice something about the check-in counters? There is no space to leave checked luggage: that is done at another counter, next to the security check. The domestic flight allowance is only 10 kg, but the fee for excess luggage is minimal: only 17 TWD/kg on Uni-Air. Most travelers only have a hand luggage (7Kg max, but I never saw it being checked): there is usually hardly anybody at the checked luggage counter and that saved the building of long, bulky and expensive conveyor belts. Note the big blue 馬公 (Magong) stamp on the BP.

Especially since there are luggage lockers, where only one of the three persons here is actually alive. I love the slogan on the right: Lots lots lots lots of luggage? Fortunately, there is the zhaijibian (a cheap and very efficient express small parcel door to door delivery system, originating from Japan, where the same ideograms are pronounced takkyubin)

Checking in was of course made faster, and after a commonplace security check, I reached this boarding room – at tarmac level for the turboprop aircraft which are parked remotely, at the upper level for pier-side aircraft. There was the essential hot and cold water fountain, like in Mainland China. 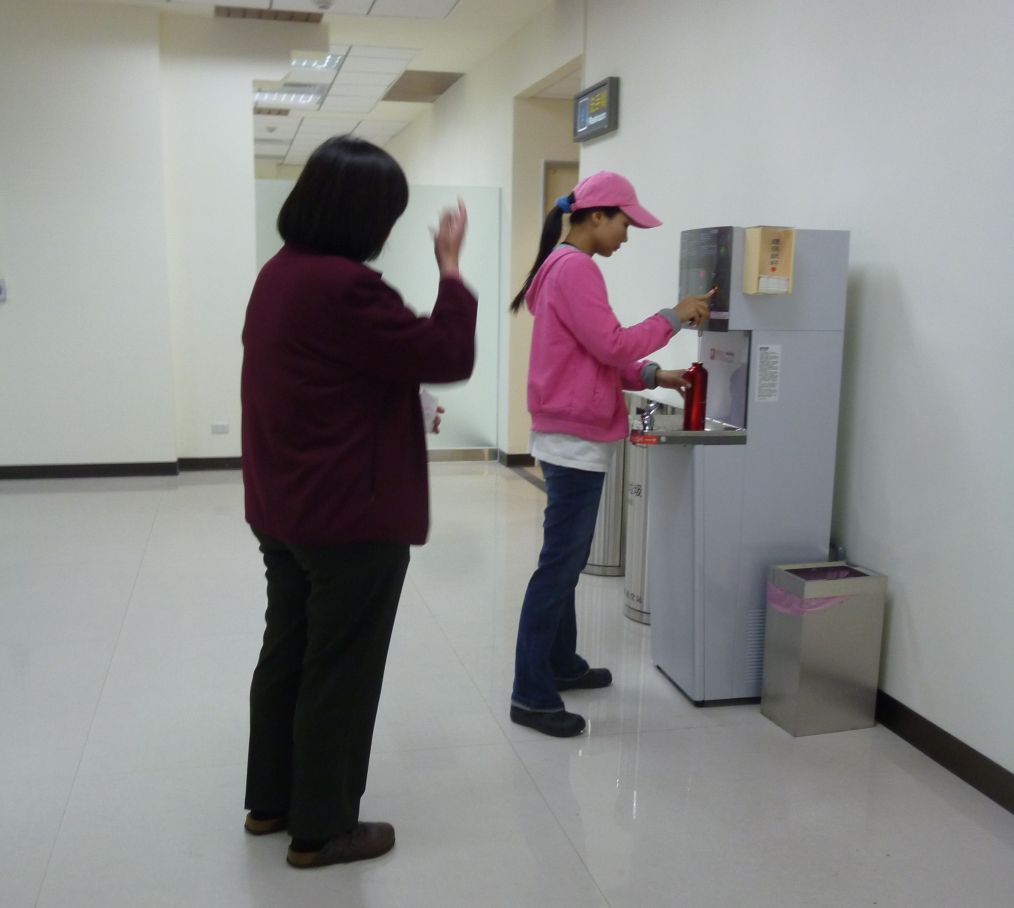 Most of the PA was in Mandarin only. (Note: probably in Taiwanese too. At that time, I was not good at telling them apart). Curiously, travelers to Kinmen also had a Japanese version. But for the flight to Magong, it was only in Mandarin, with the added bonus that the screen failed and the PA had a problem, so that employee with a high visibility vest made the announcement of Flight GE505.

The PAXbus made a long journey (at the modest scale of the airport), which allowed to spot some aircraft. (Note: this is a thing of the past. Now, the aircraft for domestic flights are always parked to Terminal 2).

Two of Far Eastern Air Transport's MD 82/83, pinned down since the company went bankrupt in May 2008. It resumed commercial operation later that year, and I have flown with them several time since.

A Mandarin Airlines ERJ 190, yet another Taiwanese regional airline

A Trans Asia Airlines ATR72, not the one that I am going to board …

Now, this the international section with this JAL 767, serving Tokyo-Haneda 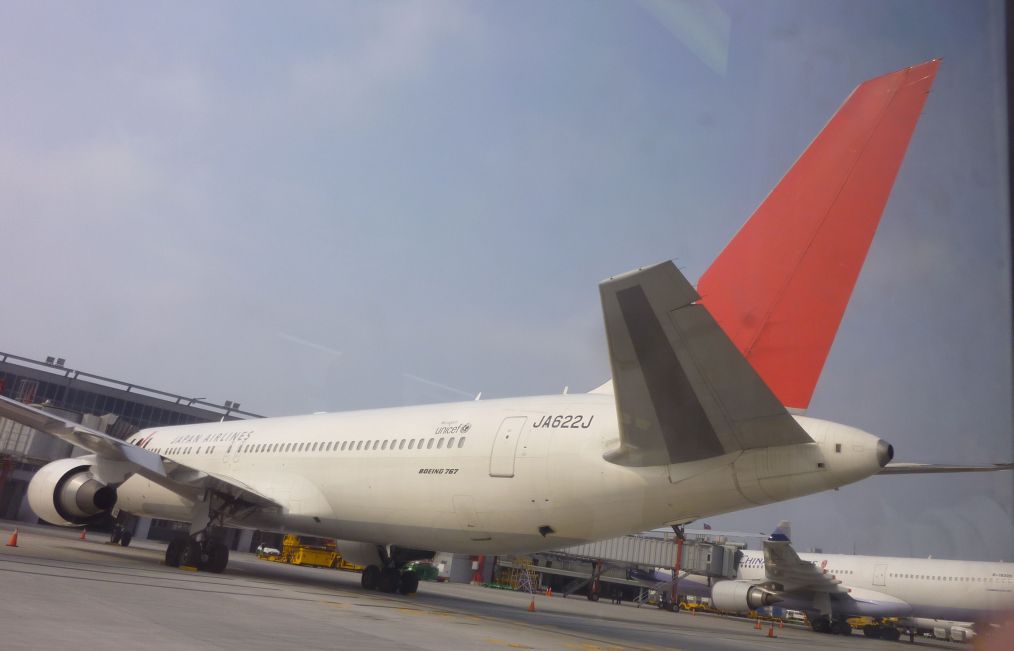 Like Flight JL031, here on final approach over the park where the World Floral Expo was held. 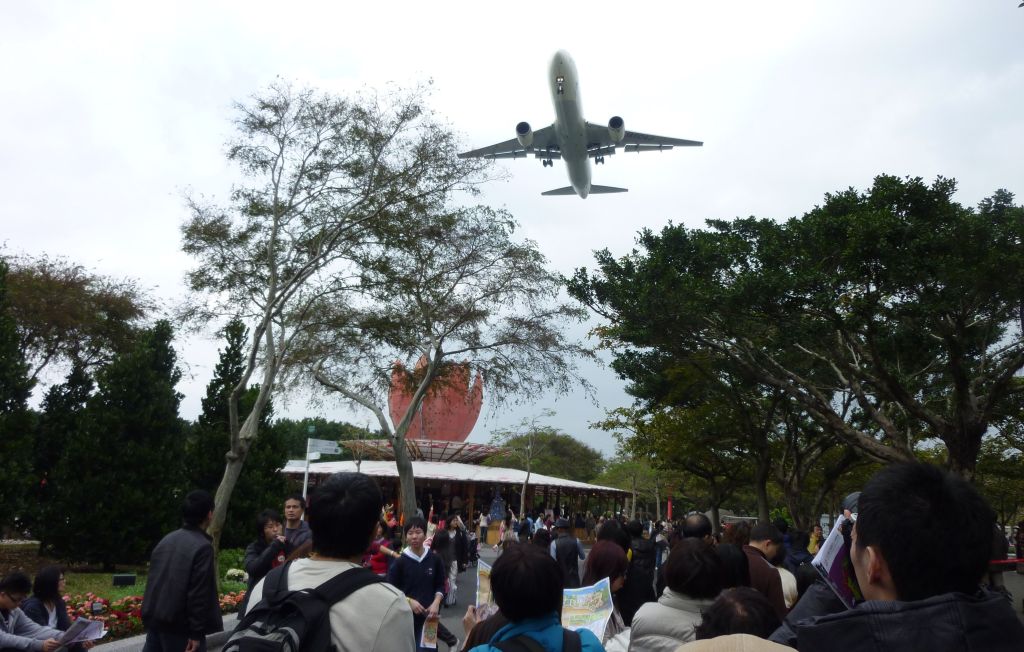 Let's go back to TSA's tarmac with this China Airlines A330

And another anonymous MD 80/90, possibly also from FAT, like that in the background.

Anyway, we reached this ATR72 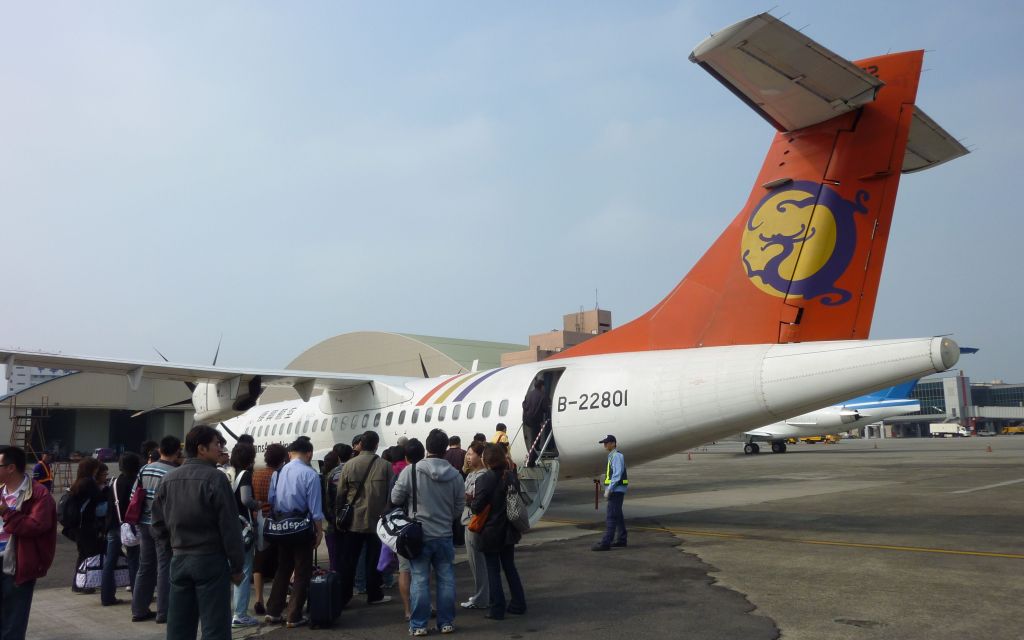 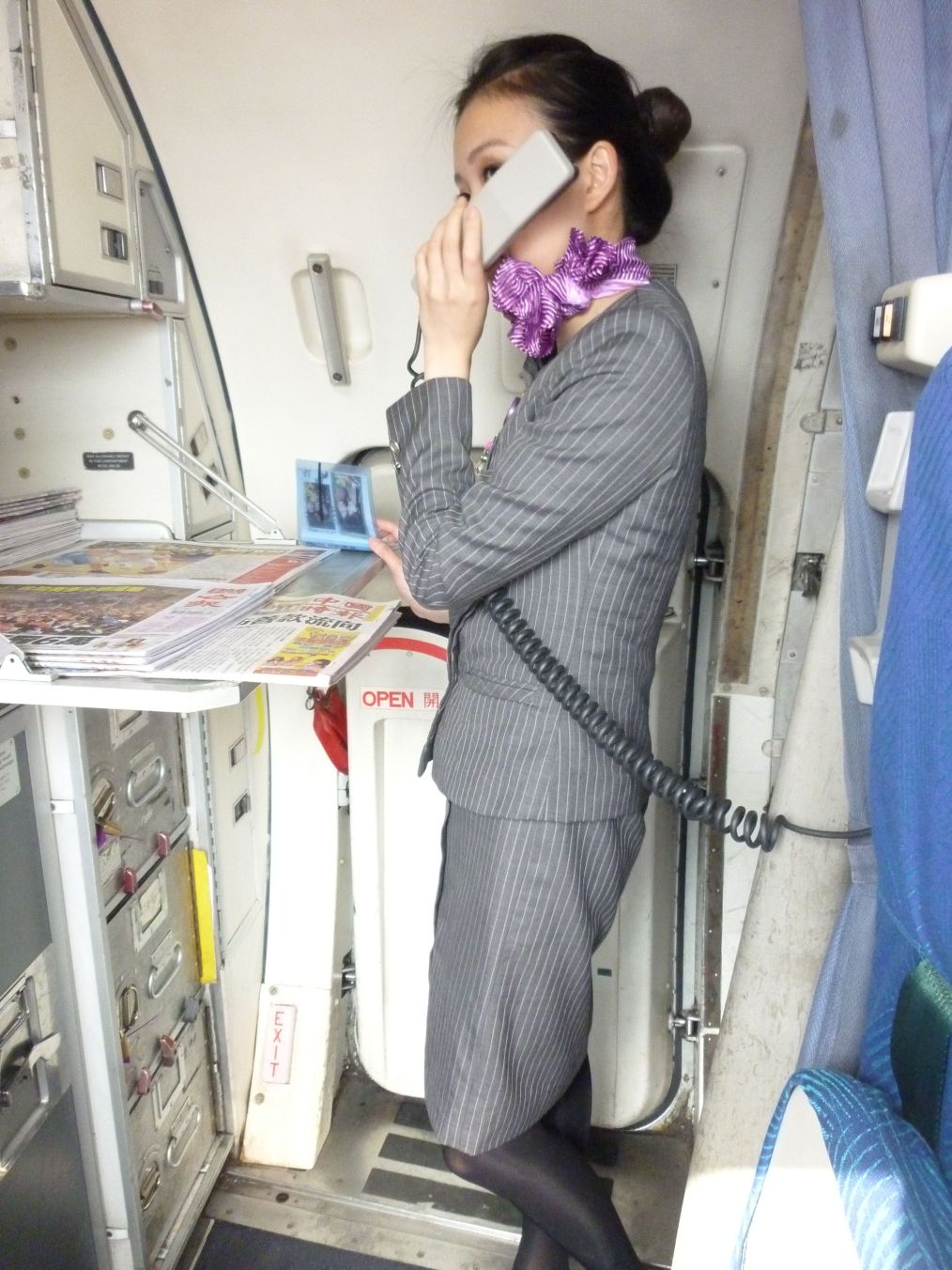 Among local peculiarities, the use of electronic device (laptop, MP3, camera) is prohibited during the entire duration of any domestic flight in Taiwan. Why is that? To simplify the work of the flight attendants? Or more possibly to restrain Chinese spies to take picture of the country that they still would like to conquer? Anyway, a flight attendant goes down the aisle with an explicit bilingual sign for all who did not catch the announcement.

The ceiling of the ATR72 is somewhat low, but I found the aircraft quite comfortable, and not very noisy for a propeller aircraft. It is only a 50 minute flight, and I was seated in the back, i.e. far from the motors.

Take-off was on time. I did take pictures despite the prohibition, the first of many in later flights, despite the stained window. In the foreground, this is one of Taipei many riverside parks, located between the river bank and the walls which protect Taipei from the floods generated by the typhoons.

It was cloudy on most of the flight, and I had a bad case of contre-jour, which reduced the illegal picture opportunities, except this cup of coffee with sugar. 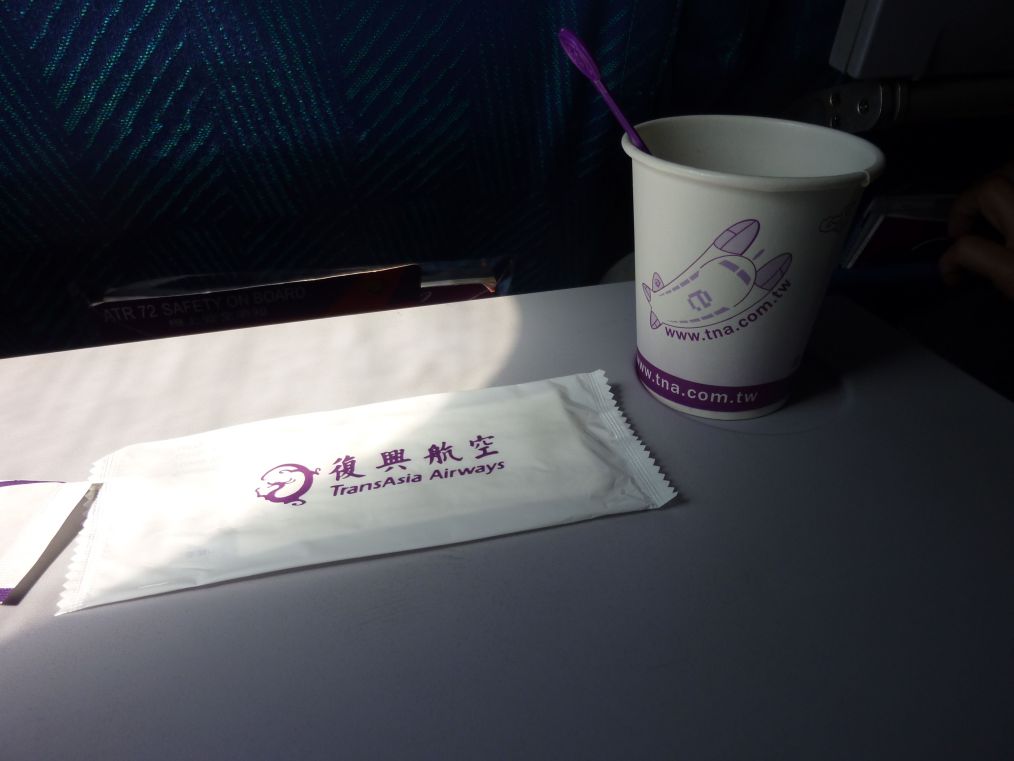 I could leaf through the on-board magazine, whose editor had definitely made a poor choice of cover story.

Landing in a couple minutes on Penghu, whose coast is especially complex 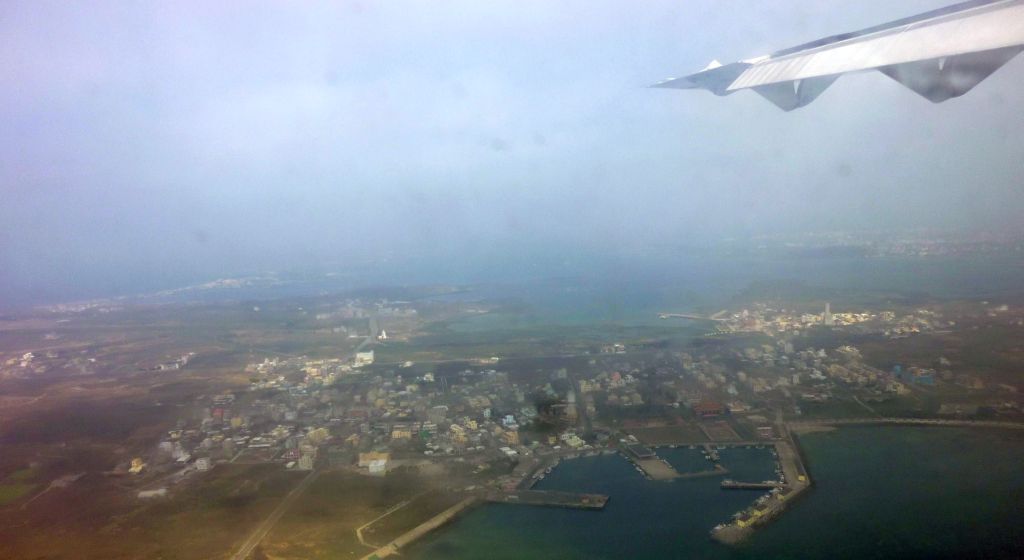 The aircraft during unloading of the freight and refueling

Penghu is an archipelago halfway between Taiwan and Mainland China, and although things have become much quieter lately, this is still a sensitive area. Only when I reached the terminal did I see this sign. 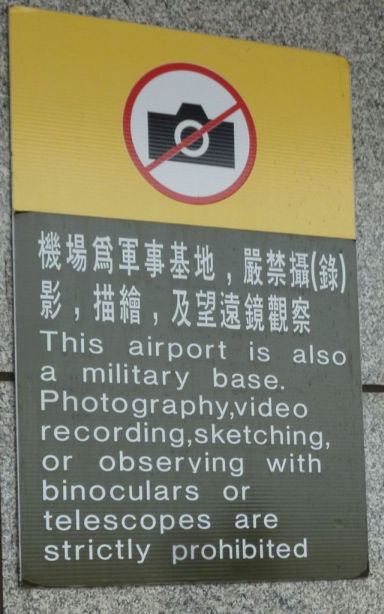 Actually, I had already seen hints in the background behind the aircraft.

This is the end of the FR, you can skip the ensuing tourist bonus and jump to the conclusion.

Why would you want to go to Penghu ?

There are plenty of reasons, even when you are not into windsurfing (the archipelago is swept by the wind channelled between the Mainland and the high mountain ranges of Taiwan). One of reasons welcomes the visitor at TPE, above the customs counters. The Welcome to Taiwan greeting features a picture of the columnar basalt of uninhabited Hunching Island. 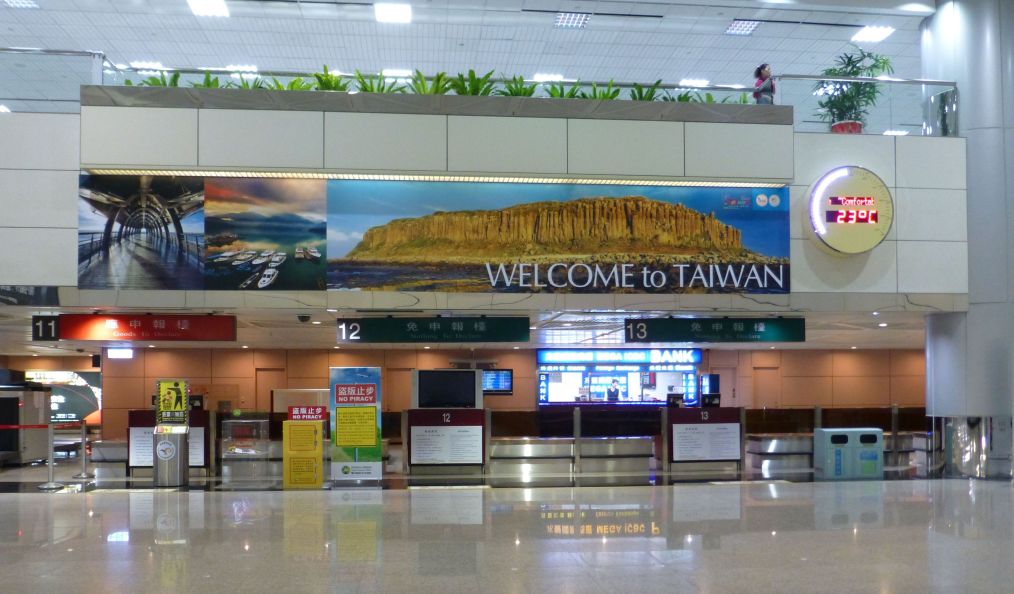 The photographer must have come at sunset; tourist boats touring the outer Penghu islands leave too early to have such a good lighting, but are well worth boarding.

There are more on the main island

Another famous attraction is the stone weir built by two brothers to catch fish trapped by the tide off tiny Chimei Island. 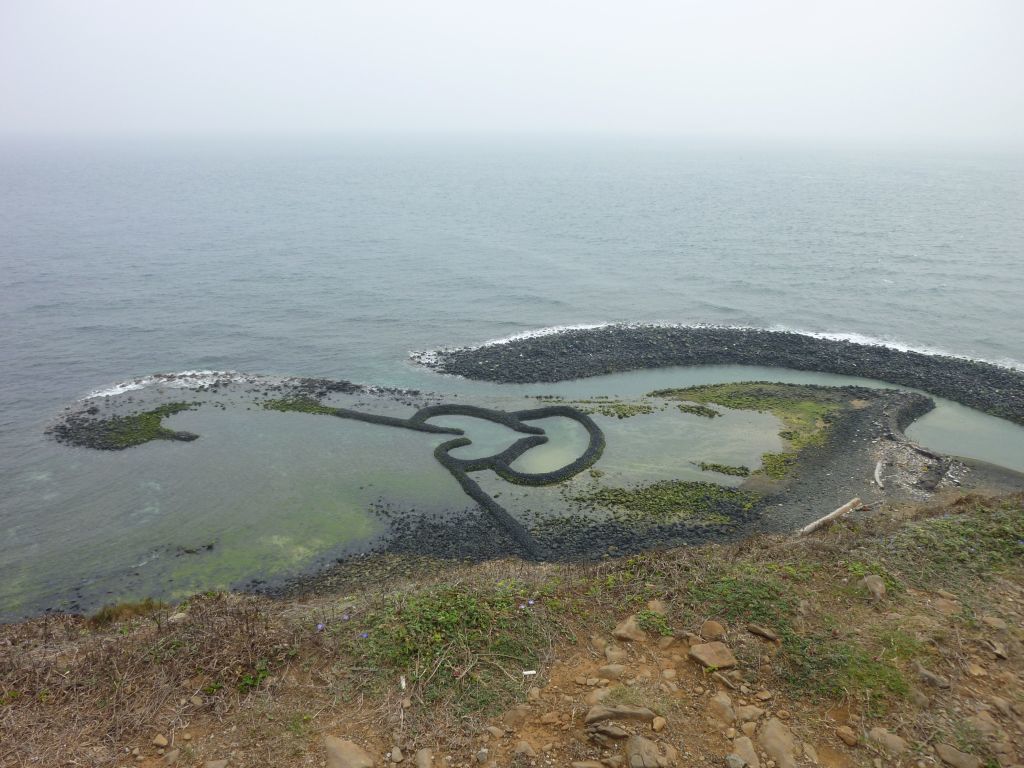 Wang'an Island, features a striking abandoned yet well preserved village. Both Chimei and Wang'an have a landing strip, and are served by Daily Air with Dornier 228s from Kaohsiung. See my FRs on what is by far the most exotic Taiwanese domestic airline. 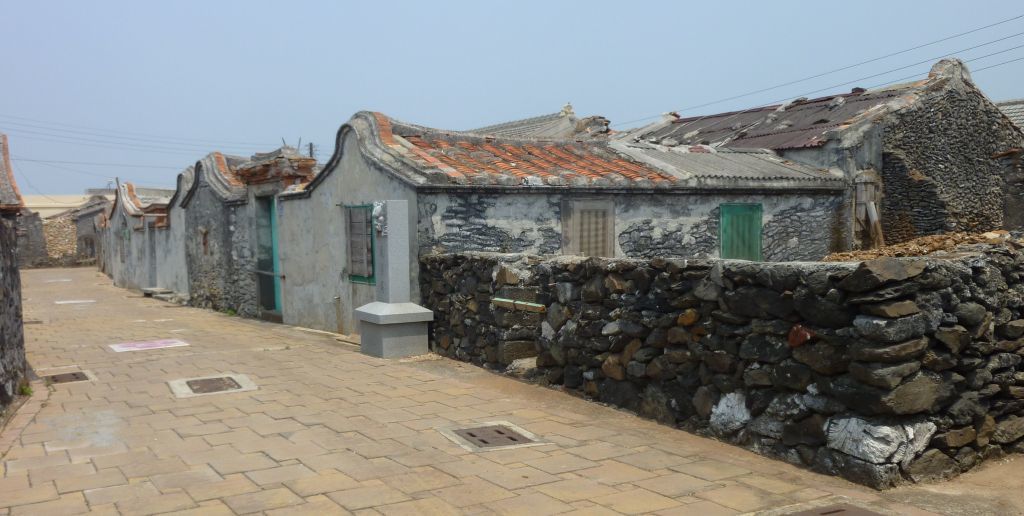 Back to the main island, it is difficult to forget that fishing used to be the main means of life there, until tourism started picking up – better book early if you plan to come in summer or on a week-end. 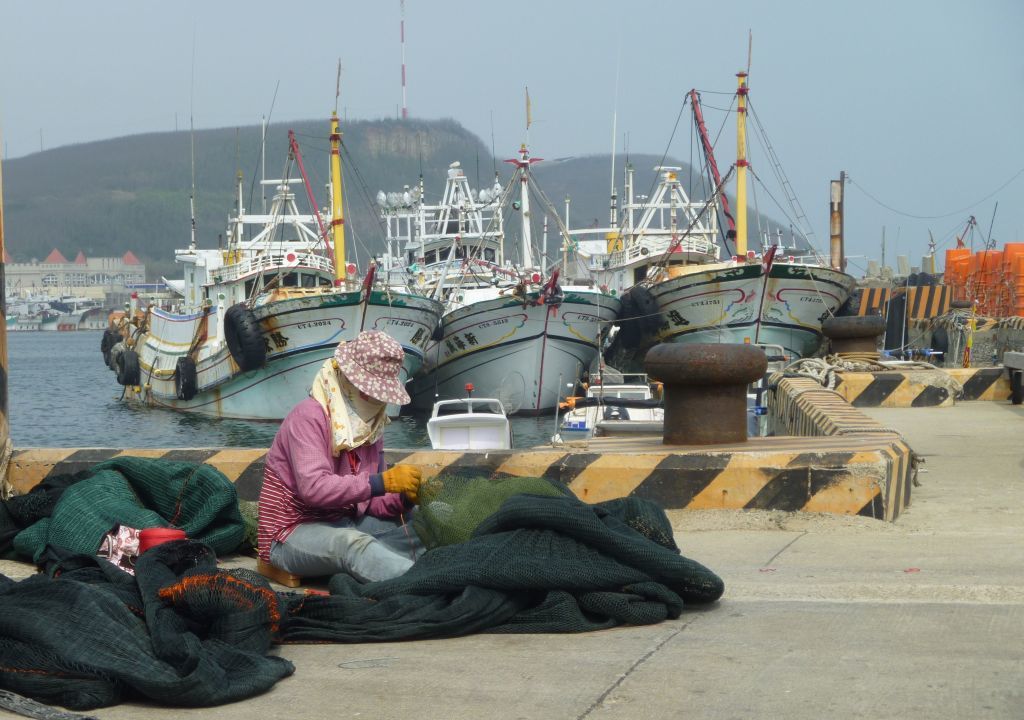 This is a single banyan tree (and actually only part of it) in front of a temple in Chiangmei. 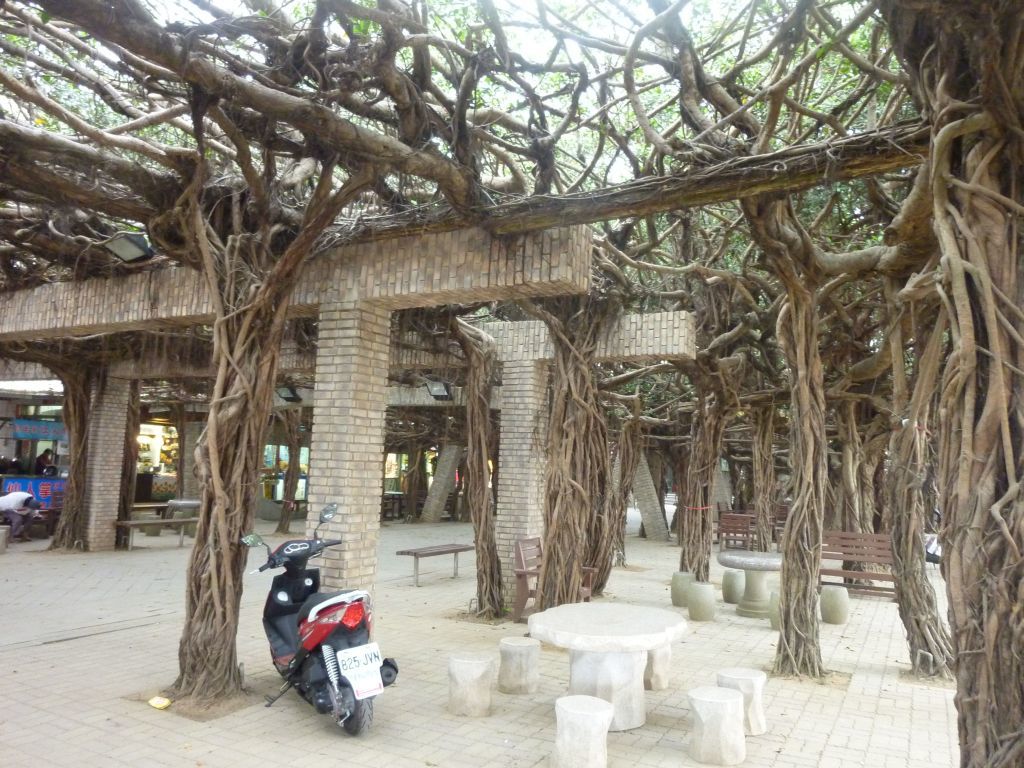 I was not impressed by the local delicacy, but I did give it a try

An old pharmacy in Makung 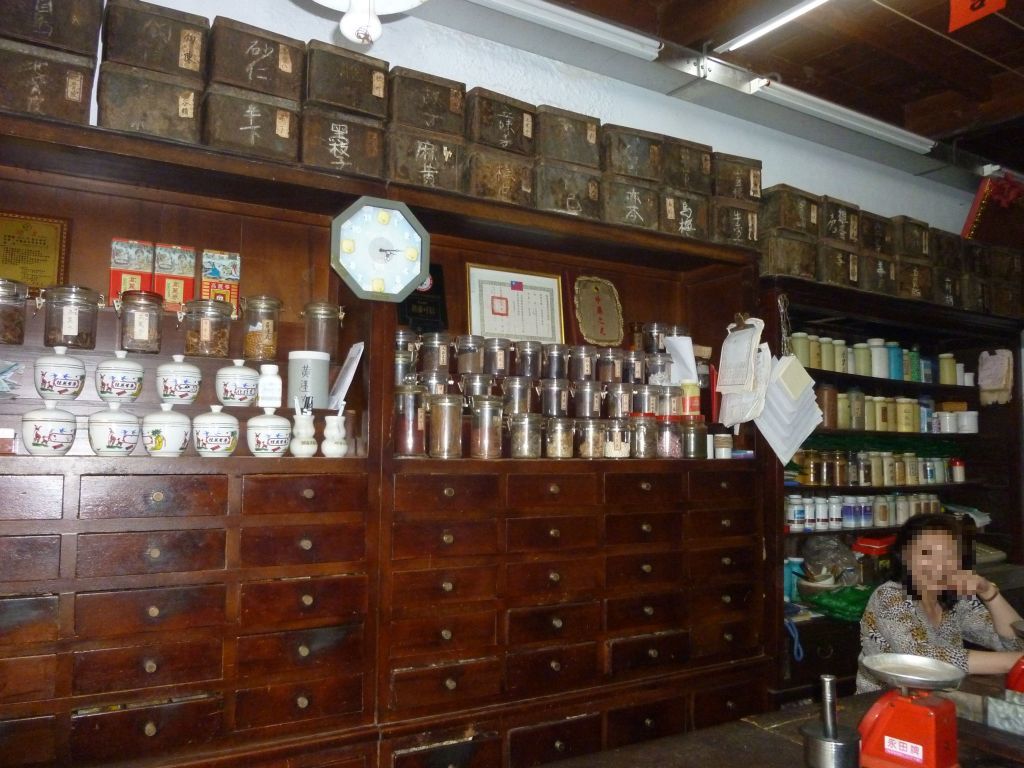 There has not been any fighting with China in Penghu, as opposed to Kinmen, but that did not stop the Taiwanese from building an oversized Martyrs' Mausoleum. 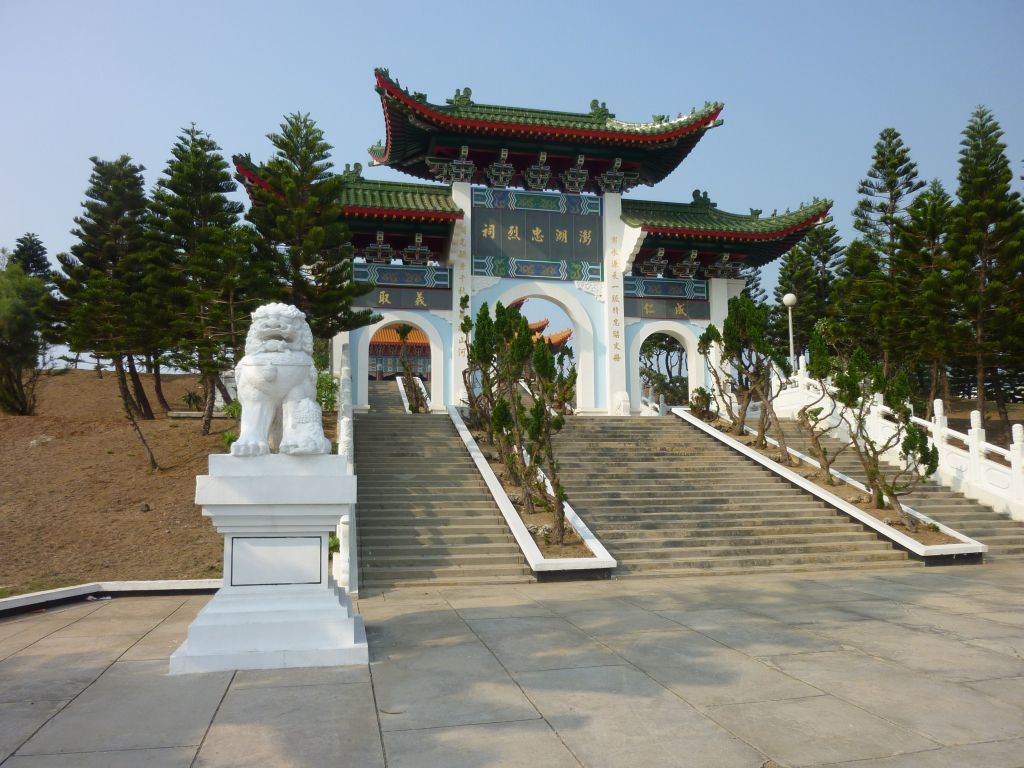 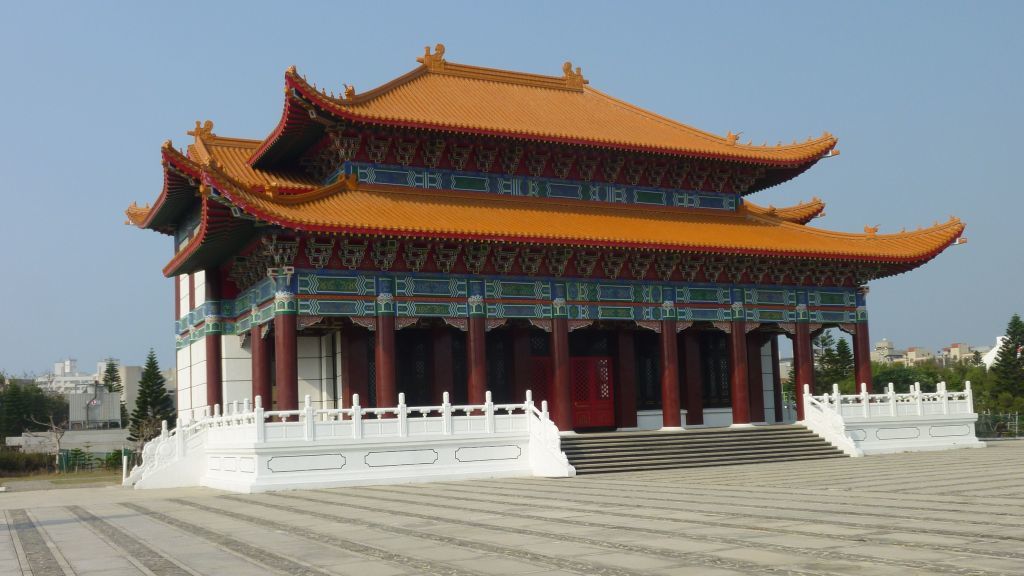 And then, there are countless temples, including some of the oldest in Taiwan, but I'll let you discover them when you visit the place.

This was my first of dozens of Taiwanese domestic flights. In retrospect, it was hardly different from most other routes. I was to discover gradually the unusual rules of the Taiwanese air travel game, where unpaid reservation, improbably long waiting lists and free no-shows are part of the way of life. That MZG is a mixed civilian - military airport is not unique either - there are five of them in Taiwan.

Uni-Air and Mandarin Airline also serve MZG - I did not try them on that route. But basically, Transasia Airways does the job just as well as them, and somewhat cheaper than them, because the ATR72 is cheaper to operate than jets.

PS : Magon, Makong, Magong, Makung... ? this is an example of the anarchy of the transcriptions of Chinese in Taiwan. It is the same town, the main one on the Penghu archipelago, also known under its Portuguese name of Pescadores, i.e. Fishermen's Island.