By marathon GOLD 1971
Published on 21st October 2013
This is the return leg of this flight to Penghu.

The archipelago of Penghu: 90 000 inhabitants and such an oversized terminal? Penghu has actually some of the Taiwanese favorite beaches: lots of them since the shape of the four major islands is so crooked and wind, lots of wind. Like the Chinese and the Japanese, the Taiwanese are not at all into tanning and actually shield themselves as much as possible from the sun, but many of them love windsurfing and they crowd the islands in summer. Off season, there are hardly any visitors, but there is just as much wind. One hundred kilometers riding a scooter taught me something about it. The best things, including week-ends, always have an end, and I had to head back towards Taipei. 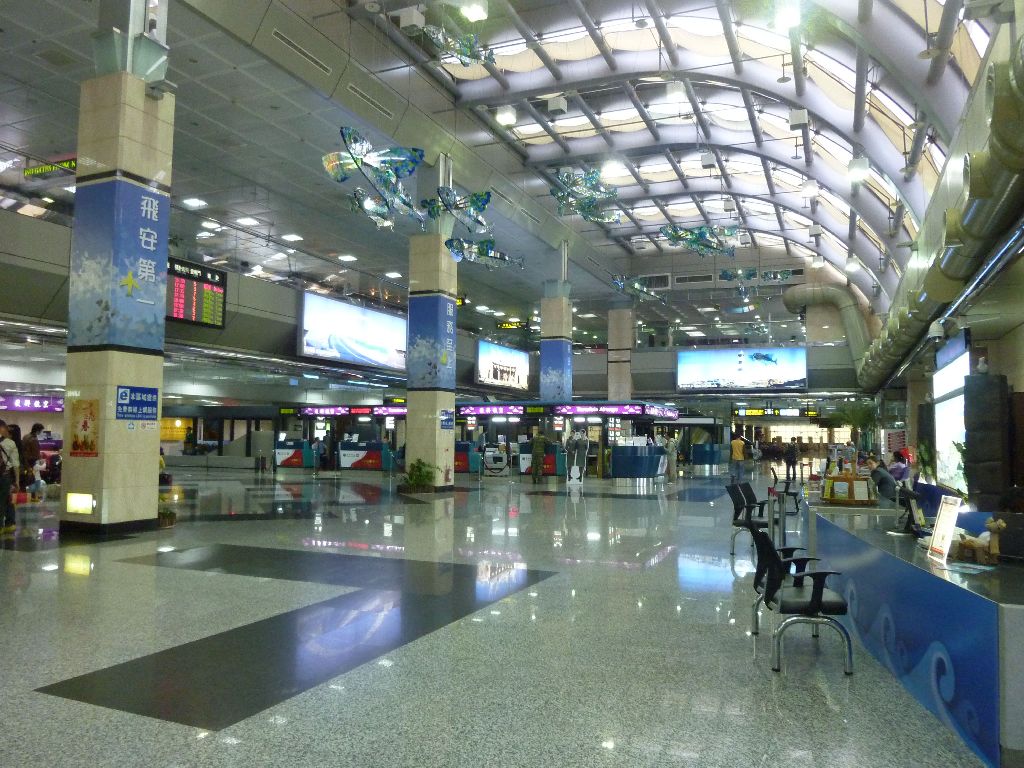 You all know it since Flight Report included the airline's logo at the top of my FR on the way in: it is only in English that TransAsia Airways has this somewhat ambitious but nevertheless non-descript name. Its real name in Chinese is Fuxing Hangkong, which is typically Taiwanese: it means something like the Return to Happiness Airline… understand by that the return of happiness of the Kuomintang Nationalists of ruling again Mainland China, which they still hoped to do when the airline was created in 1951, two years after they had retreated to Taiwan after the victory of the communists. You would not find such a name elsewhere! Note that there is a Fuxing Avenue in a many cities in Taiwan, including Taipei.

Anyway, I was happy to return to Taipei by the 18:10 flight, but since I had exhausted the list of places I wanted to visit, I was very early back at the airport. So much so that when I checked in, the friendly and bilingual staff asked me if I wanted to register on the waiting list for the previous flight. A Sunday evening, even though all flights were booked full? 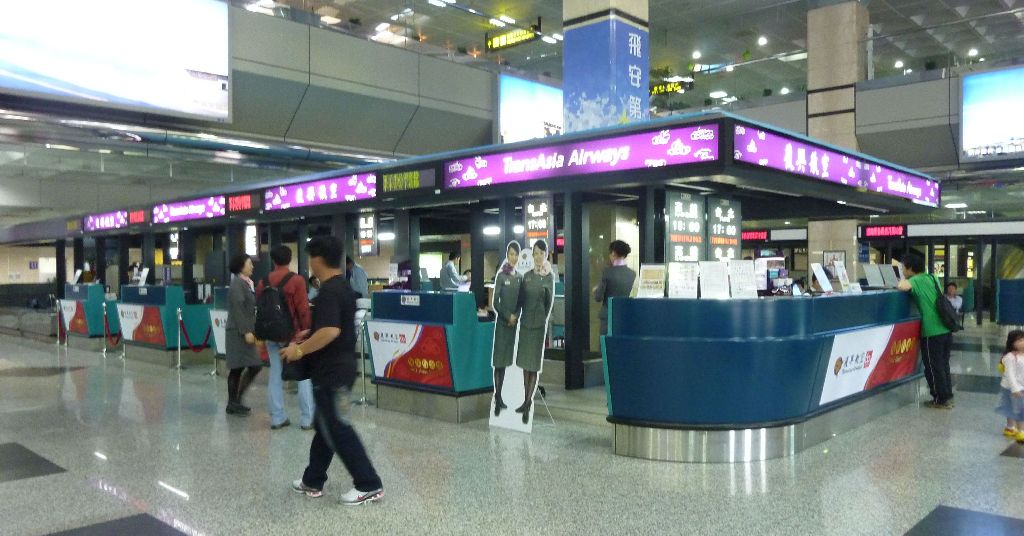 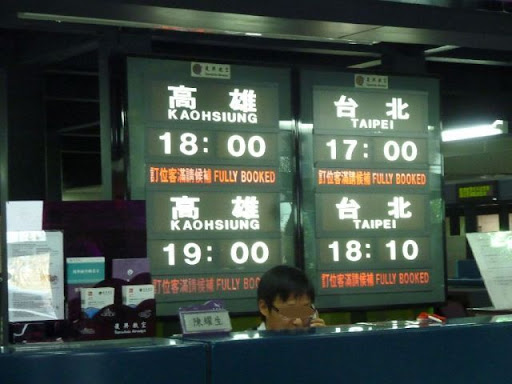 Who never dares never wins, and I added my name in 37th position on that day's waiting list to Taipei. 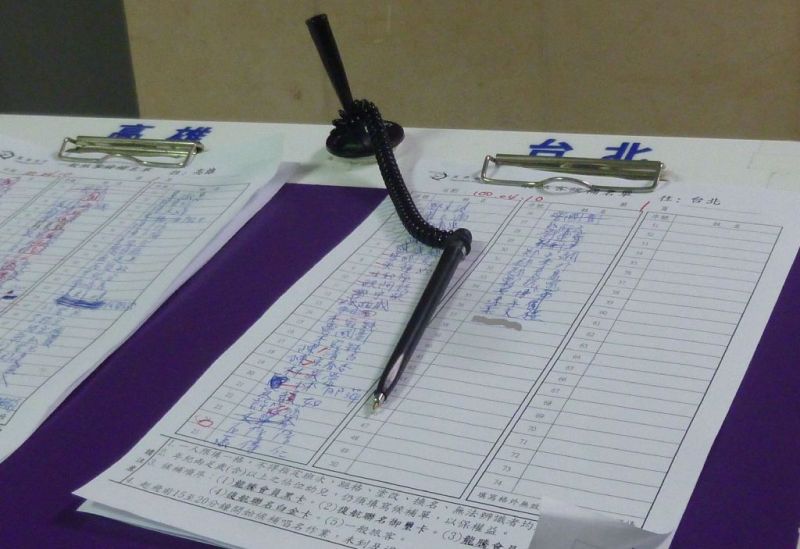 It was less nonsensical that it seemed, because the Taiwanese domestic flights are unusual in that they can be booked by phone for free. Air France and its competitors have stopped that a long time ago, because the French had a strong tendency of booking three different flights in order to keep options open according to the weather. The Taiwanese apparently manage it differently, partly because the offer is actually often less than the demand. 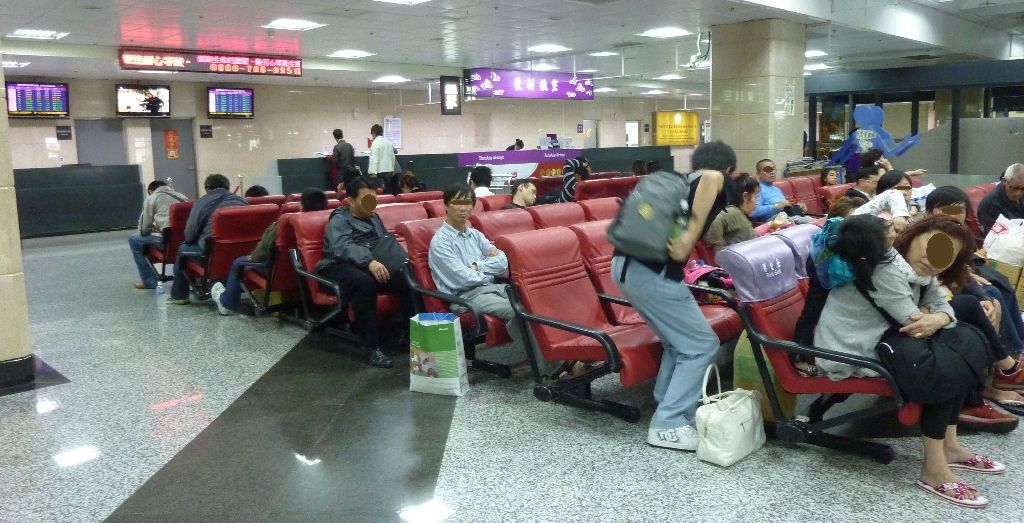 But my chances were nevertheless slim: at H-20', an employee called the names on the list (you had to react quickly), five or six lucky passengers signed in, and that was it: I was some ten ranks too far down the list, which I was later to 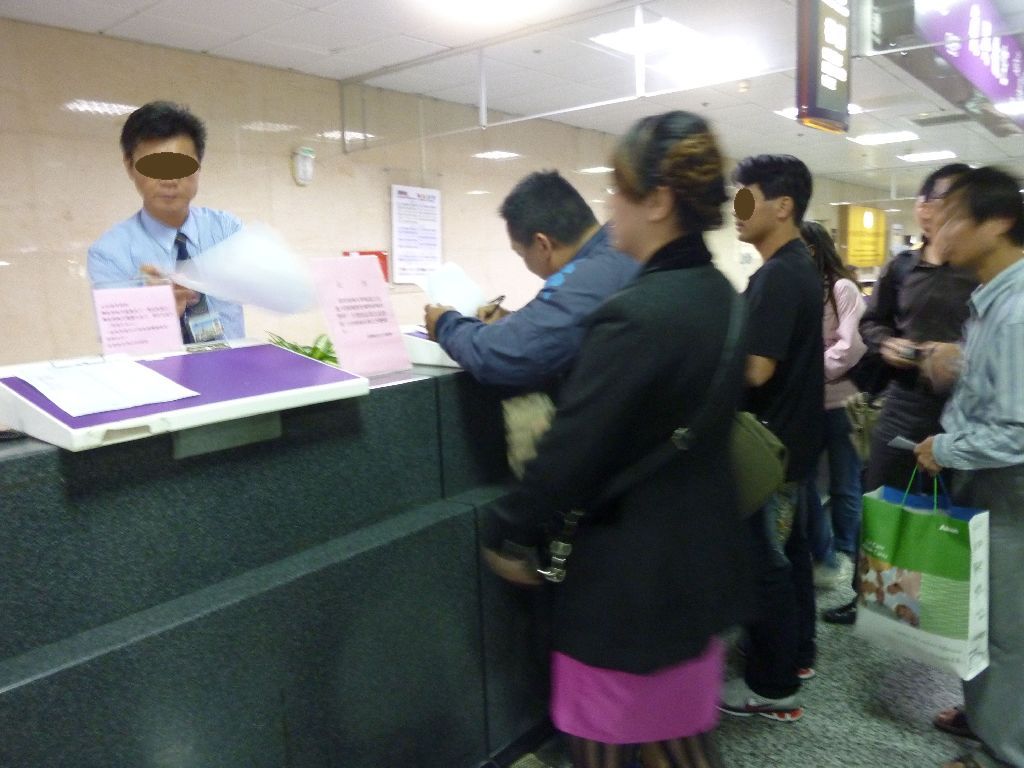 Note by the way the seats landside: very comfortable and in ample supply, at least at that season.

The departing level is upstairs, with a very ordinary security check, and more comfortable seats for the Sunday evening crowd.

For those who at the end of their visit have not yet understood that Penghu is an archipelago whose economy is entirely based on the sea (fishing for seafood lovers and the beaches), the decoration is there to desperately get the message across. Or maybe it is meant to reduce the shock of being back in the office on Monday morning.

(Off season, the rocky shores, the basalt columns like the giant picture which used to be above the immigration counters at TPE, and the countless temples also deserve a visit). 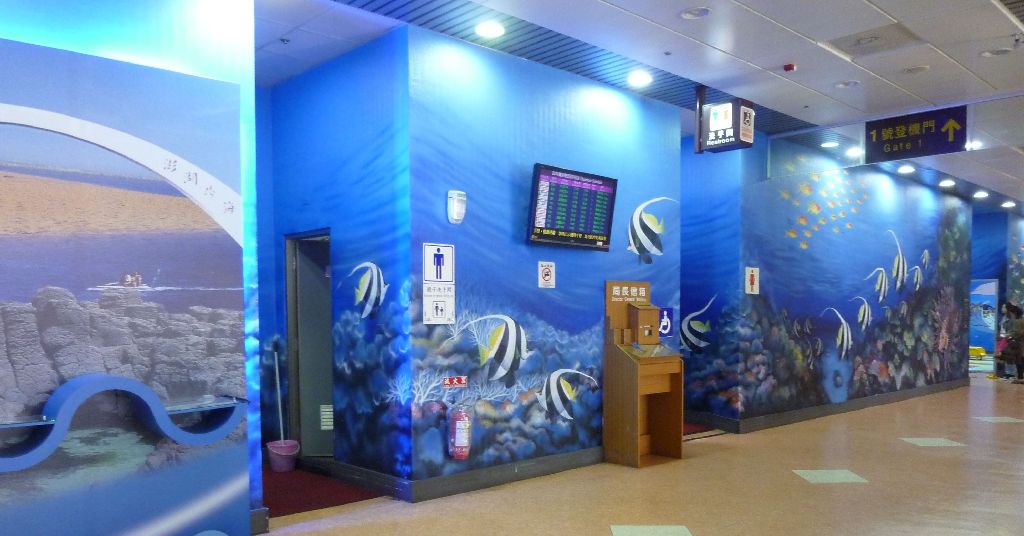 This display is the only lifebuoy for those who have been drowned by the Chinese only PA announcements. 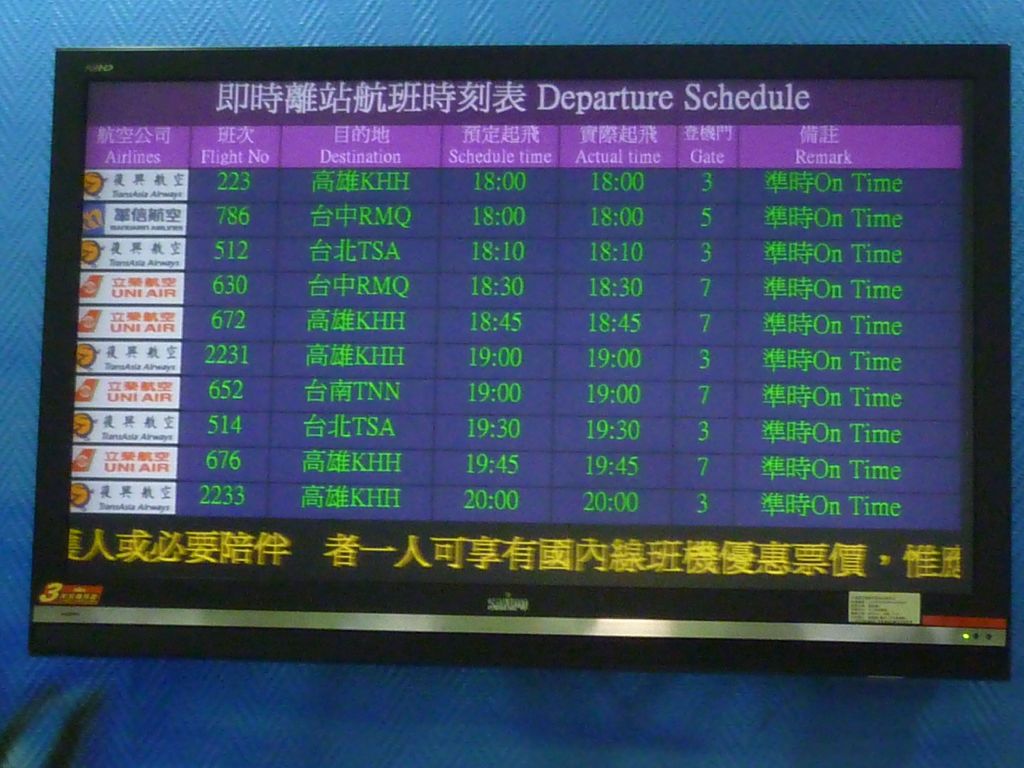 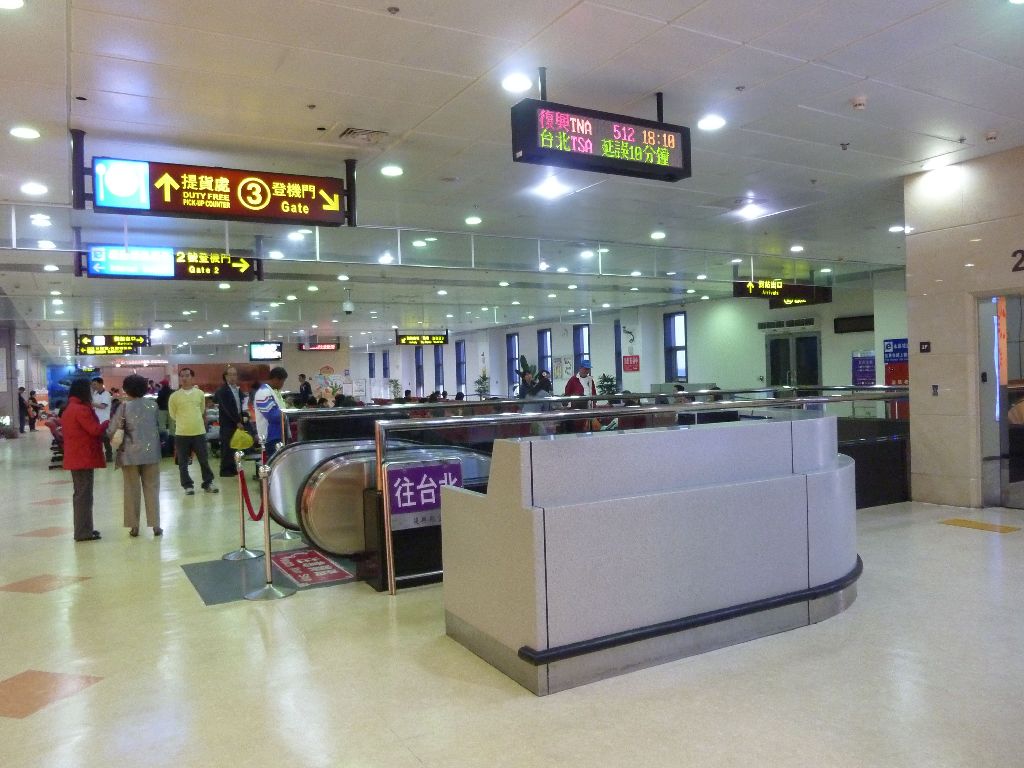 Flight GE512 is nevertheless displayed as being on time, even though it has been announced delayed ten minutes on the PA, due to the late arrival of the aircraft, and it is also posted at Gate 3, in Chinese only.

Not very late, actually, we do not waste time boarding the plane, because the ATR72 is next to the terminal, down the stairs, with the sunset above the port engine.

By coincidence, I have the same seat 19A as on the way in, but this time the window is clean, which allows me to take the picture of hangars which are probably not meant for ATR72s. 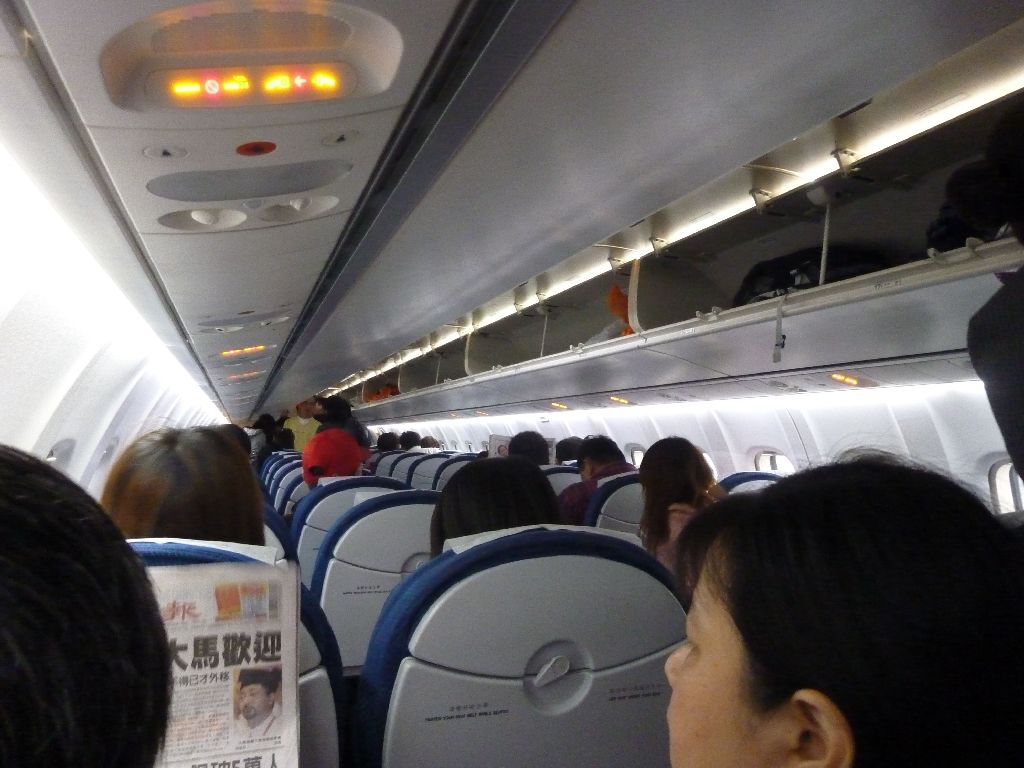 The plane takes off six minutes late, using very little runway thanks to the wind and will catch up its delay, because the southerlies will help for that too.

The offering of food and beverages is limited to a cup of coffee or orange juice. Like any poor student, under the pretext that I had left on week-end, I had postponed my Chinese homework until Sunday evening, and spent most of the flight on writing exercises. My Chinese tutor mercilessly rejects with red ink any incorrect stroke of these so complex ideograms, and that says something about the smoothness of the flight. 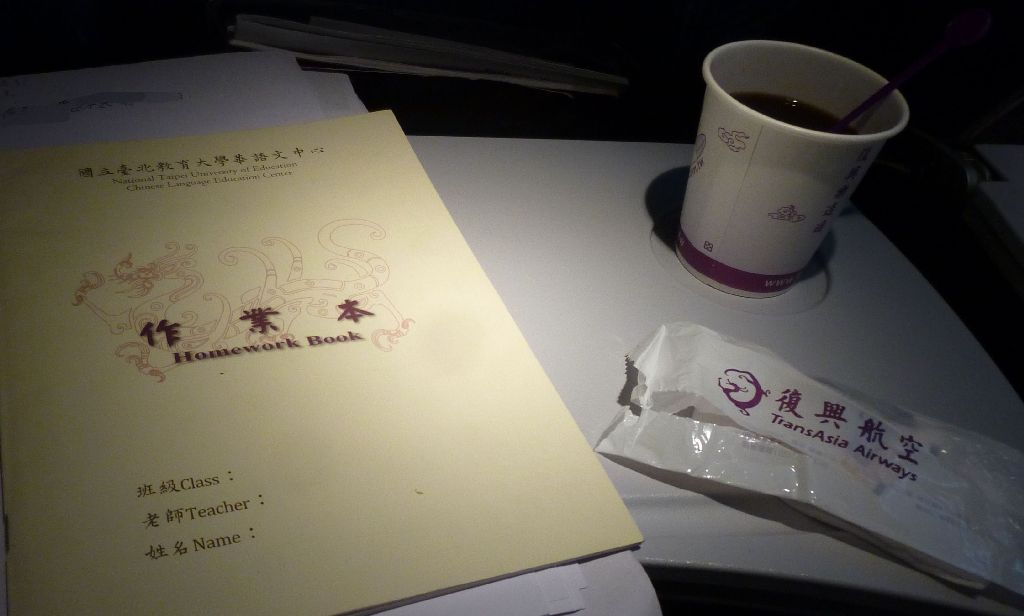 Despite the cloudy sky, the final approach on Taipei Songshan is unforgettable, flying over the west neighborhoods, the bridges on the Danshui and the floodlit city center that I know well. I hope to land one day by day time, it must be wonderful.
[Editor's note: it took me a full year to have a chance to land in daytime. Night landings are more beautiful]

We have landed in Taipei, Songshan airport, the text is quite usual, but surprise, this time it is delivered successively in Mandarin, Taiwanese and English, ending with the usual Please remain seated until the seat belt sign has been switched off. The plane taxies, stops at its stand, the engines are cut off, all lighting goes off, but Seat belts on remains lit for at least two minutes. And during these two minutes, only one passenger stood up, illustrating a contrario the discipline of the Taiwanese. In Mainland China, half of the passengers would already be standing before the last turn….

Transfer by bus, letting another TransAsia ATR72 pass. At the terminal, we go through a small luggage delivery room, where the display is a bit stranger: under the Mandarin Airlines flight from Kinmen, appears our flight GE512, listed as originating from Kinmen in English and Magong in Chinese. Nobody on board seems to have any checked luggage anyway.

Exit landside: the display shows the importance of the traffic. The flight from Beigan has been cancelled, not a surprise, because at that season, the weather plays havoc with the flights serving this tiny island. On Friday, three of the four daily flights had been cancelled. I flew later to Beigan, and know something about it. 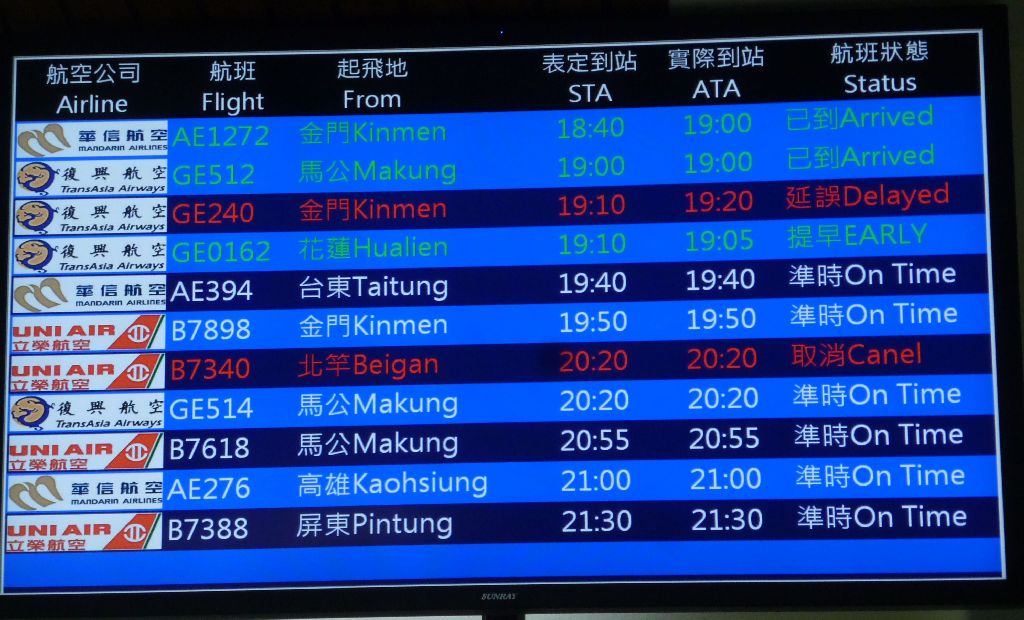 I only need to head back to the subway and its station announcements in Mandarin, Taiwanese, Hakka and English, four languages that my closest Taiwanese colleagues knows all, which is not unusual in multicultural Taiwan.
See more

I derated slightly the accessibility of MZG, because although there is a rental counter in the terminal, the cars and scooters are too far from the terminal and they need to drive you to/from there. There is no wait for a shuttle, though.

It was a typical Taiwanese domestic flight : no frills and no hassle. Sure, they only give you a drink, but do you really need to have food on a 50' flight ? The seat pitch in the ATR72-500 is slightly less than in the other aircraft used inside Taiwan, but then again, it is a short flight. (I later flew in one of Uni-Air's brand new ATR72-600 and found it more comfortable).

The average flight time is 0 hours and 52 minutes.