#48 out of 99 Airlines A minimum of 10 flight-reports within the past two years is required to appear in the rankings. 4471 reviews

By marathon SILVER 4819
Published on 21st October 2013
This is again an oldie, one of my earliest FRs that I translated from the original French version.

No waiting at the Elite/Business check in counters. The employee has me confirm that CDG is my final destination and shows me the luggage the tag with that destination code. The immigration control has a typical Chinese efficiency: a five minutes wait for around thirty passengers, despite the absence of a priority lane. The security checked is little bit jammed – its lack of space betrays the age of the terminal. Terminal 2 is not gigantic, and it is a short walk to the Skyteam lounge, in front of gate 11 which is always the one assigned to flight AF125.

Skyteam's lounge is never overcrowded before the departure of flight AF125. It is spacy and always quiet. There is a separate access for P passengers, who must be even less crowded: I never saw more than one on each of these flights. The seats are comfortable, the view is non-descript; there are power plugs only alongside the wall and the windows where the air-conditioning blows ice-cold air. The latest novelty is that the wifi is encrypted and you must ask a staff to please type the password on your laptop. (Note: they improved the system afterwards, with the truly revolutionary idea of printing the password on tiny slips of paper and giving them to passengers upon request) 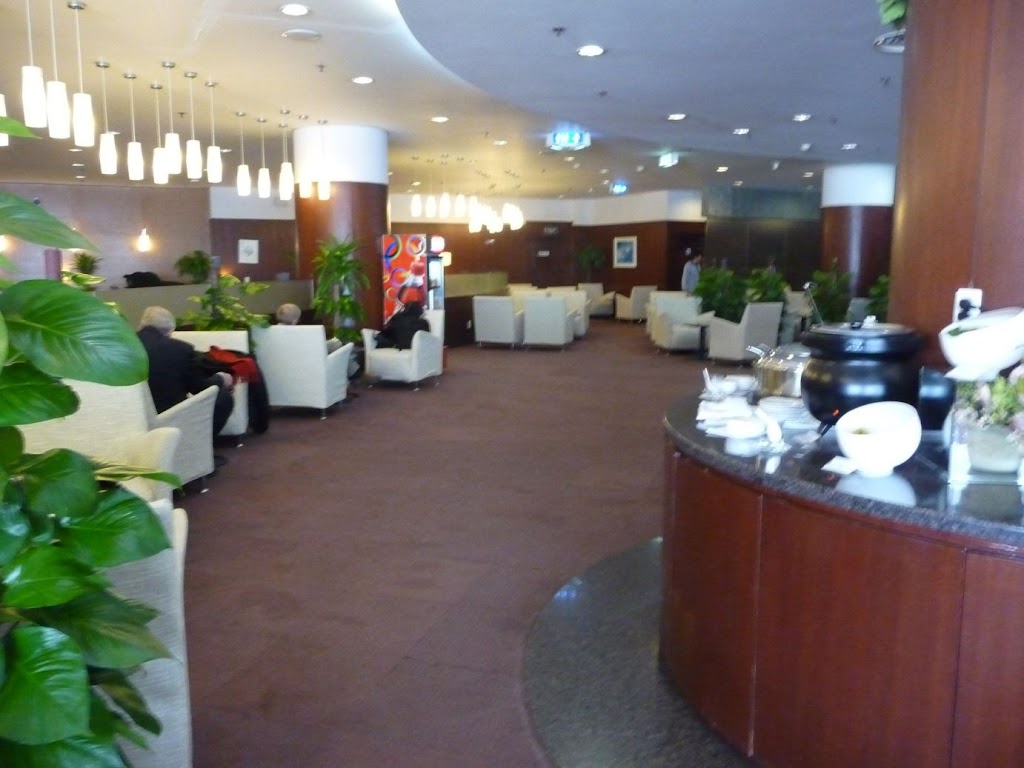 A collection of hot and cold food, both Chinese and Western: the buffet is small but continuously resupplied, and there is of course an ample variety of soft drinks, teas, coffees, as well as several whiskies; all self-serve.

No foreign media: a small signs on the counter announces that there is no foreign media any more for customs reasons, and that it would be available on board. As a result, some titles are unavailable, because all copies have been taken by economy passengers who boarded first, whereas business class passengers tend to wait until the last moment, since the boarding gate is in front of the lounge.

On board: in J and Y, the plane is nearly full, and this is in nearly always the case on that flight. Apparently only one passenger in P, and that too is usual. The IFE's screen aged poorly, the image shows lines. The IFE's control handle also is worn, and I used a spoon to manage to remove it from its storage place.

No big deal for me: I only use IFEs to watch the geovision, but that either means poor maintenance care, or less likely sheer bad luck that it just happened.

On the other hand, and as nearly always on AF flights, the power supply plug is unusable: my laptop requires 90W, but Air France only delivers 70W, and if you need more, you get zero. [When I received a new laptop which only needed 65W, I found that it still did not receive any power in AF planes in business class]. I do hate that, even though some hint that travelling in J is for watching movies or drinking fine wines, not working on your laptop.

By the way, this a most unusual picture in one of my FRs: that of a glass of an alcoholic drink. My neighbor took champagne, and I chose orange juice as usual.

Flying AF after months of Chinese domestic flights in economy means suddenly aging by 20 years when you look at the flight attendants. They all have greying hair, whereas those of CA, MU, CZ and the like are at most in their thirties. I guess that it has to do with the rapid growth of the Chinese airlines, and also a much better job security in France which I do not complain about. An insider told me that it was unrelated to seniority: Air France flight attendants are not promoted to business class. They can express preferences for this or that region of the world, and it so happens that Far East flights attract older staff, as opposed to transatlantic flights.

This time, I tested to cold meal designed for those who want to have more time for work. I expected a full tray, but no, it is simply the ordinary meal without the hot dish. Appetizer: a very decent foie gras, puzzlingly associated to a mango flavored stuff. The flight attendants proposed to serve cheese at the same time, on its traditional fake vine leaf, which used to be Air France's signature. No choice: the camembert and the cantal are nondescript, the fourme is excellent. Once all that is eaten, the tray is somewhat of a nuisance until a flight attendant takes it away. I ask to have the end of the meal quickly to go back to work and he tells me that since the aircraft is full (as was usual on flight AF125), he would do it as soon as possible. Which actually meant at the same time as the other passengers, no less then 56 minutes after eating the cheese! 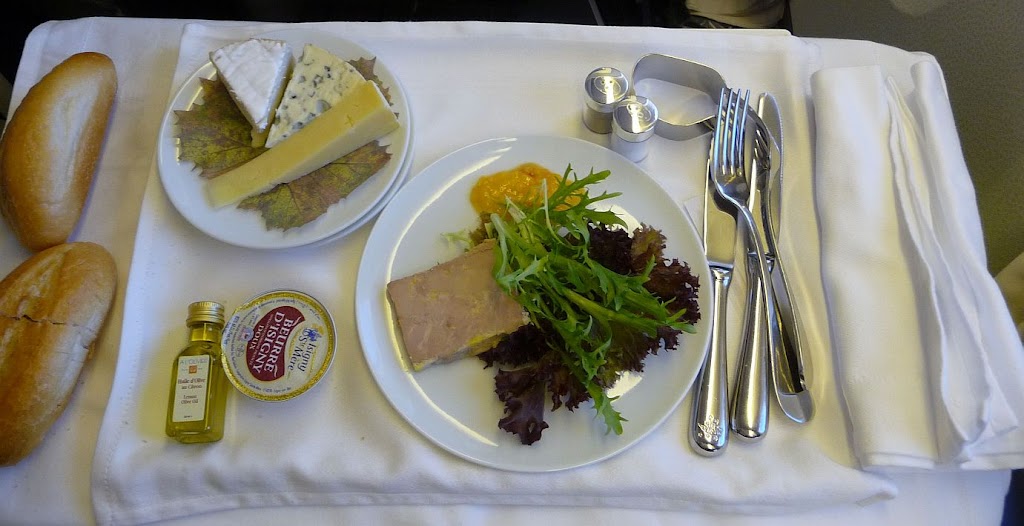 The coffee is excellent, far from the rather poor beverages served in China, not to mention the watered down ersatz served in the Far East (the US are very far east of China! ;)

These are the two notable views of that route: the Miyun reservoir, which contains Beijing's water supply:

And Lake Baikal, just north of that route, precisely two hours away from Beijing in either direction (the route on Google Maps is unrelated to the great circle trajectory). 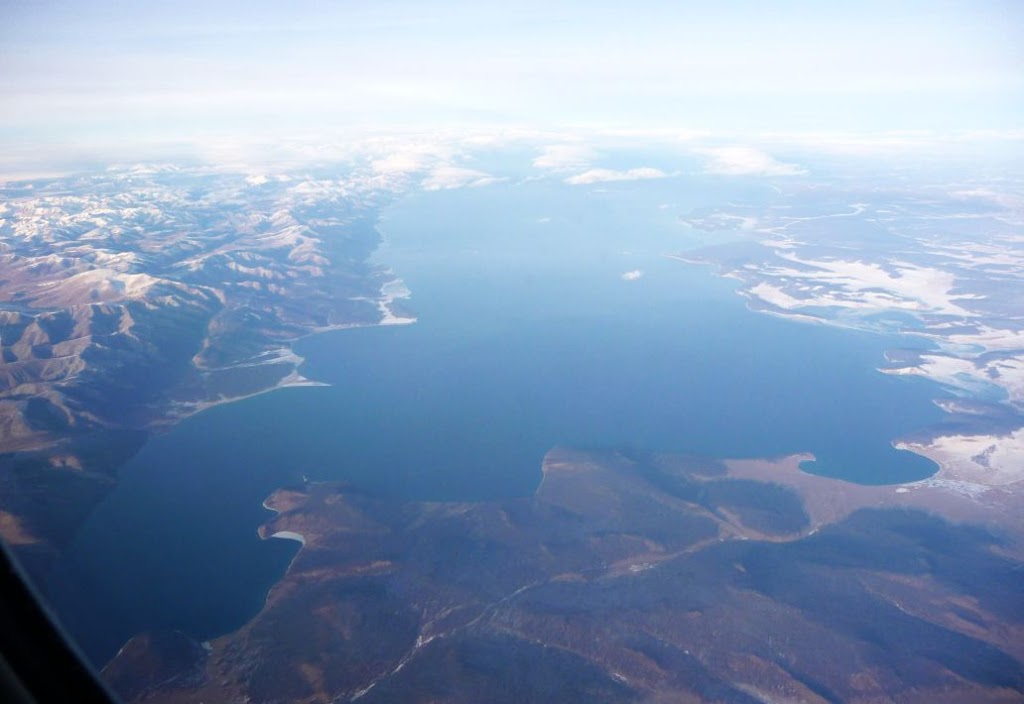 A bonus, with that meander of a river west of Beijing

And two different lightings of the right hand side reactor

The second meal is quite ordinary and quickly served an hour and a half before landing. 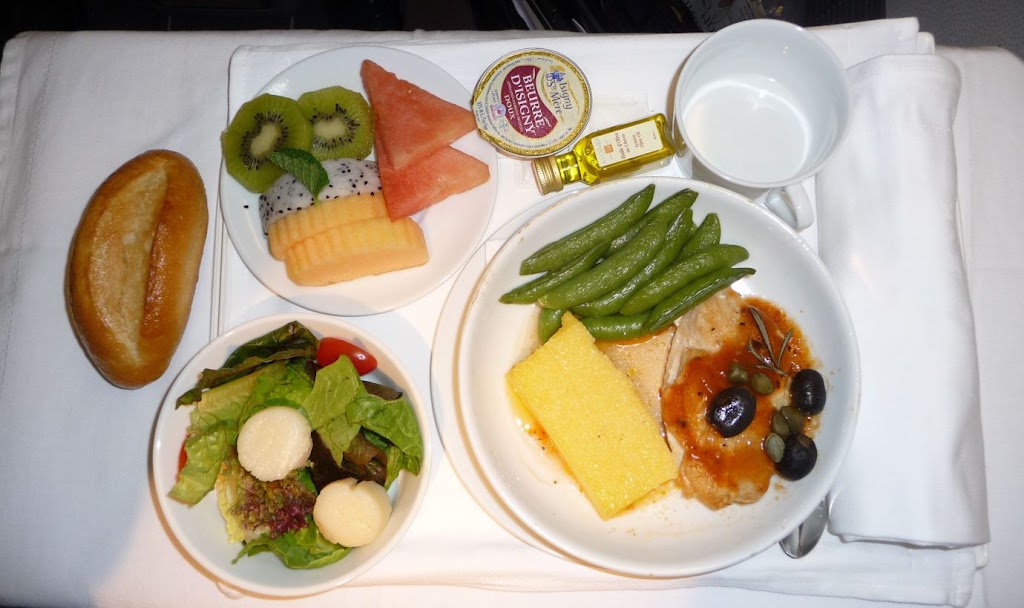 Touchdown ten minutes ahead of schedule, and arrival pier-side precisely on time at 17:40. There is a police passport check right at the door of the aircraft, creating a jam since most passengers do not have their passport ready just there. This is systematic at the arrival from Beijing, and it definitely creates an unfriendly impression. CDG is not the only place where I had this, the latest at time of posting this English version was in Stockholm (ARN) last month.

A longish walk through CDG-2E, until the immigration control where I wish good luck to the hundreds of passengers behind me : only three counters are manned, including one with a definitely unfriendly policewoman who curtly tells me to take the EU + Switzerland passports line, even though there is nobody behind me at the Other passports line. The French immigration police tries hard to be unpleasant to anybody entering the country. They should take lessons from China's immigration police.

Start of the luggage delivery in 10 minutes: this display disappears when the ten minutes have elapsed… and the first priority luggage including mine arrives after 25 minutes. This is about the delay for the last luggage to be delivered in Beijing and other major Chinese airports. Now I only need to wait in line at the only ATM which is rather poorly indicated. In PEK and PVG, there are ATMs both before both immigration and luggage delivery. Couldn't CDG install ATMs where you are waiting anyway ?

(English version note: An ATM was in the luggage delivery room the last time I landed in CDG. Maybe they read Flight Report?)
See more

After this flight, I checked AF's website carefully, and realized that this so called accelerated lunch, which simply consists in not serving you the hot meal and waiting until all other passengers have reached dessert time, was actually exactly what AF's marketing had designed. This is downright preposterous.

The comfort of the seat is acceptable, but I had then little long haul experience with competitors. But in a CO or KL aircraft, the power plug does deliver power to my laptop. Not in an AF aircraft.

Landing at CDG is not a friendly experience, and this flight was no exception. From a passenger's point of view, the comparison with a Chinese airport is cruel, except with regards to air traffic control and punctuality in case of bad weather, which are the weak points in Chinese airspace travel.

The contributors of Flight-Report published 31 reviews of 2 airlines on the route Beijing (PEK) → Paris (CDG).

The average flight time is 11 hours and 5 minutes.