#58 out of 73 Airlines A minimum of 10 flight-reports within the past two years is required to appear in the rankings. 40 reviews

By marathon SILVER 2190
Published on 2nd November 2013
This is the return leg of my failed attempt to use the last days of validity of my Chinese visa.

I had reached Nangan (in French here, in English there), only to find out that the ferry crossing to Mainland China was cancelled that day due to the weather.

The owner of the B&B was telling me that there might be a ferry the day after, but that did not seem to be sure, and also I would need to take a day off to return to Taipei on Monday.

I cancelled all my flights in China by phone and went back to the airport to cancel the KNH-RMQ flight of the day after. The staff was surprised that I have it reimbursed, since tickets on Taiwanese domestic flights are valid for one year even in case of no-show, but I knew that I really would never have a chance to use it. 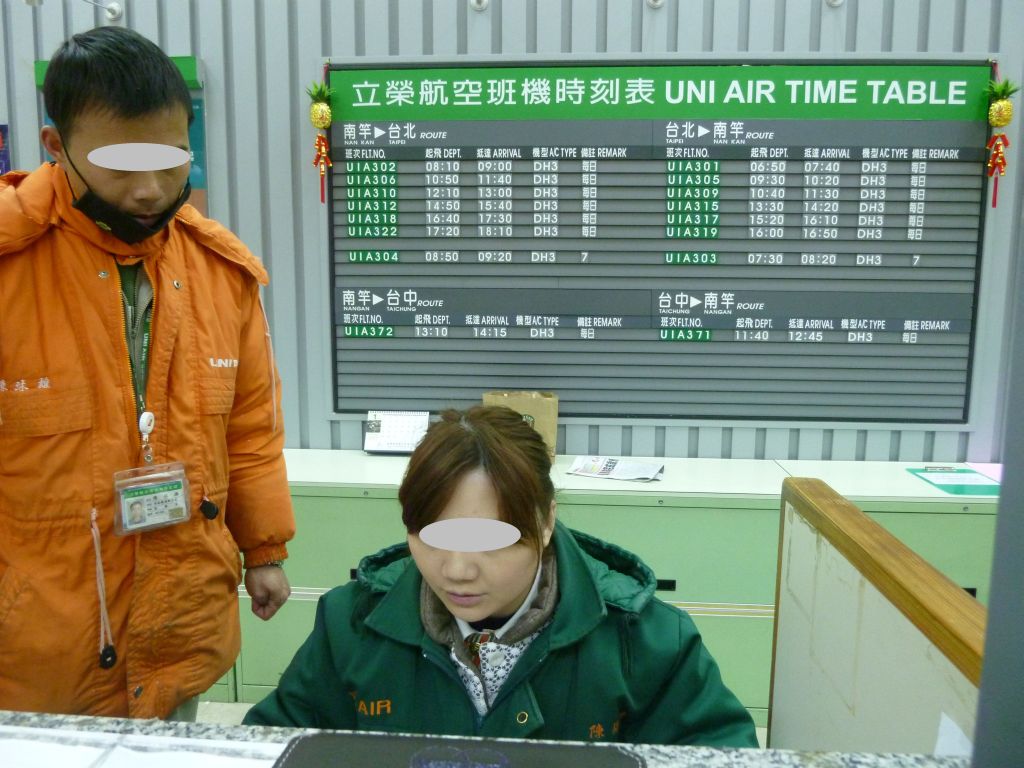 All flights back to Taipei were full (they are displayed in black on the screen), but there was a flight to Taichung, and it was not full. 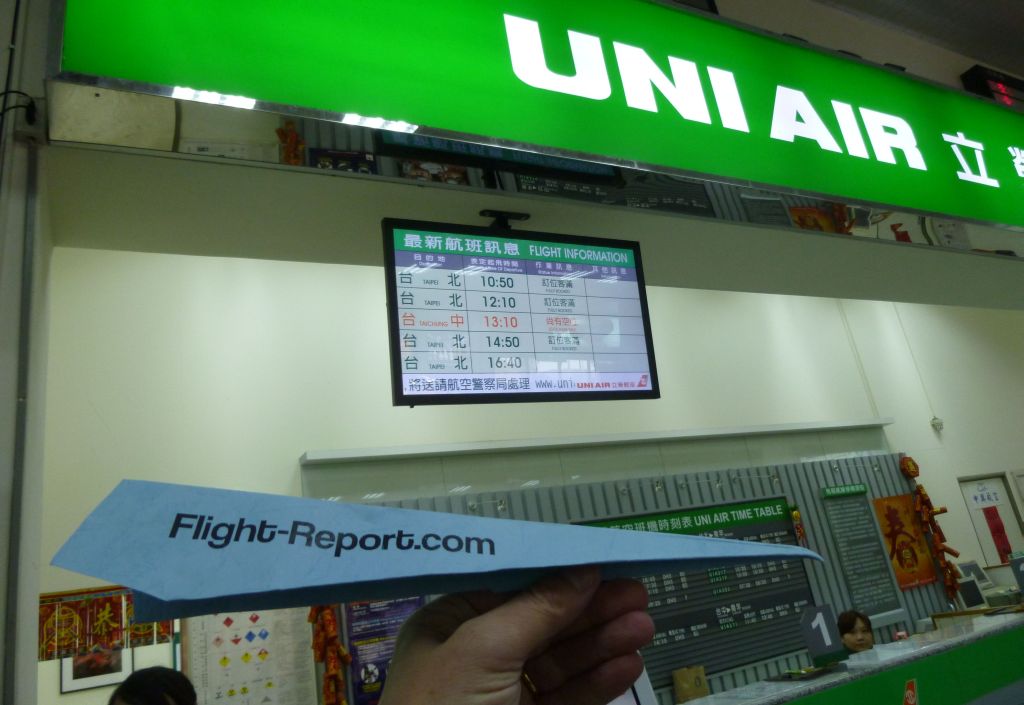 I obtained without difficulty a ticket to Taichung (with a big red stamp reminder, probably to make boarding checks easier). A window seat rather than an aisle seat? No problem, the staff scribbled the new seat number on the BP.

Nangan too had just been equipped with brand new self check-in machines. 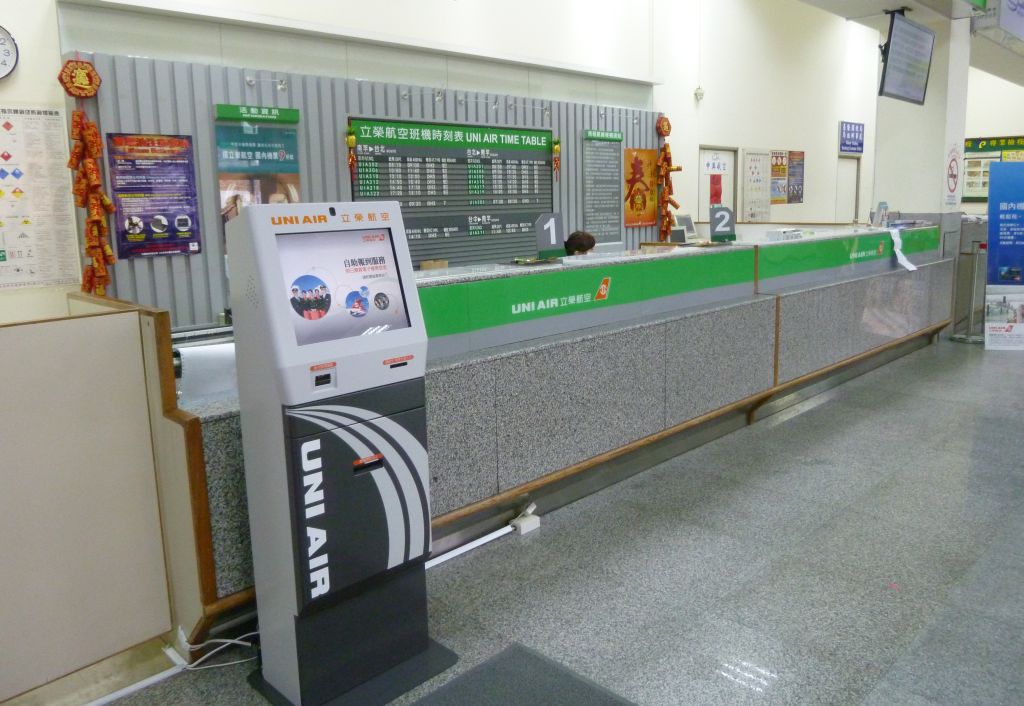 There was an employee to help customers here too. 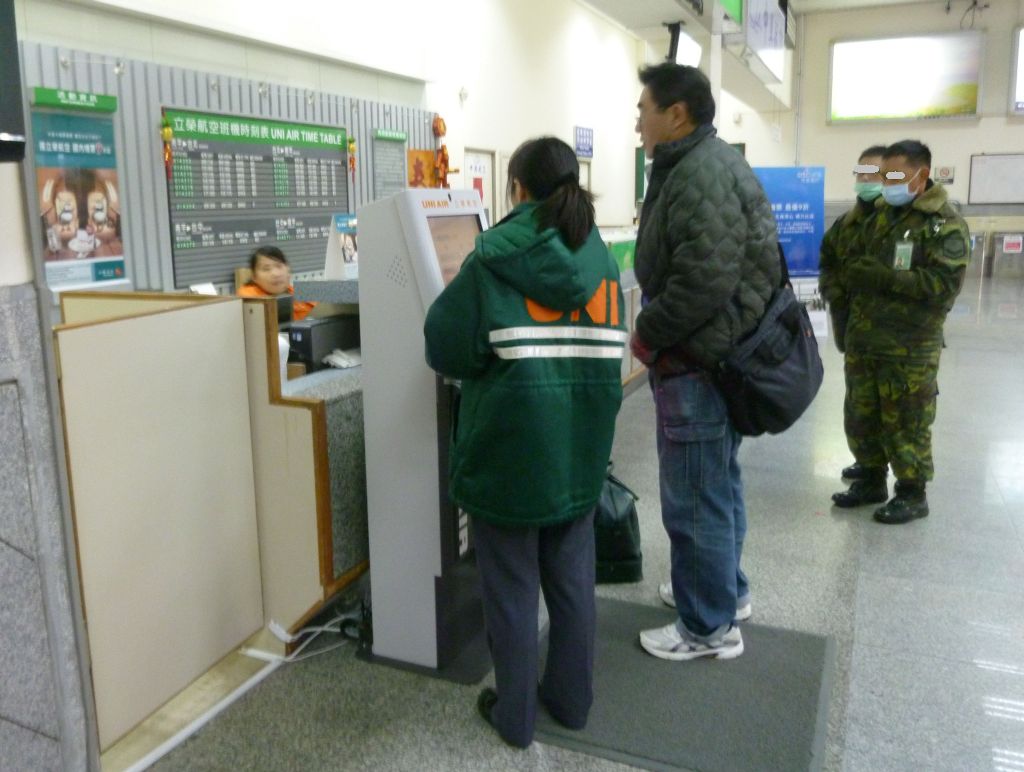 The two customers waiting in line wore fatigues and a face mask, because being on guard duty at one of the countless military bases of the island in that weather must be the best way to catch a cold. Who would want to go to Nangan at that season? Look at the terminal landside, with its Chinese New Year decorations: there was a majority of youths doing their military service.

A panoramic view of the boarding room with its supposedly duty-free shop. 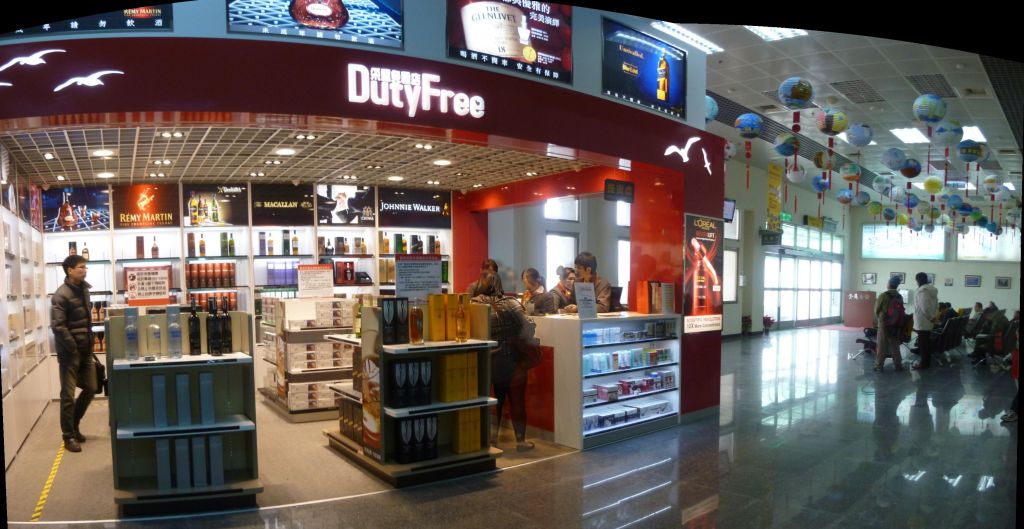 The toilet at the bottom on the right was simpler than in TSA, but equally clean. The red button on the left wall is an alert button in case you feel sick. 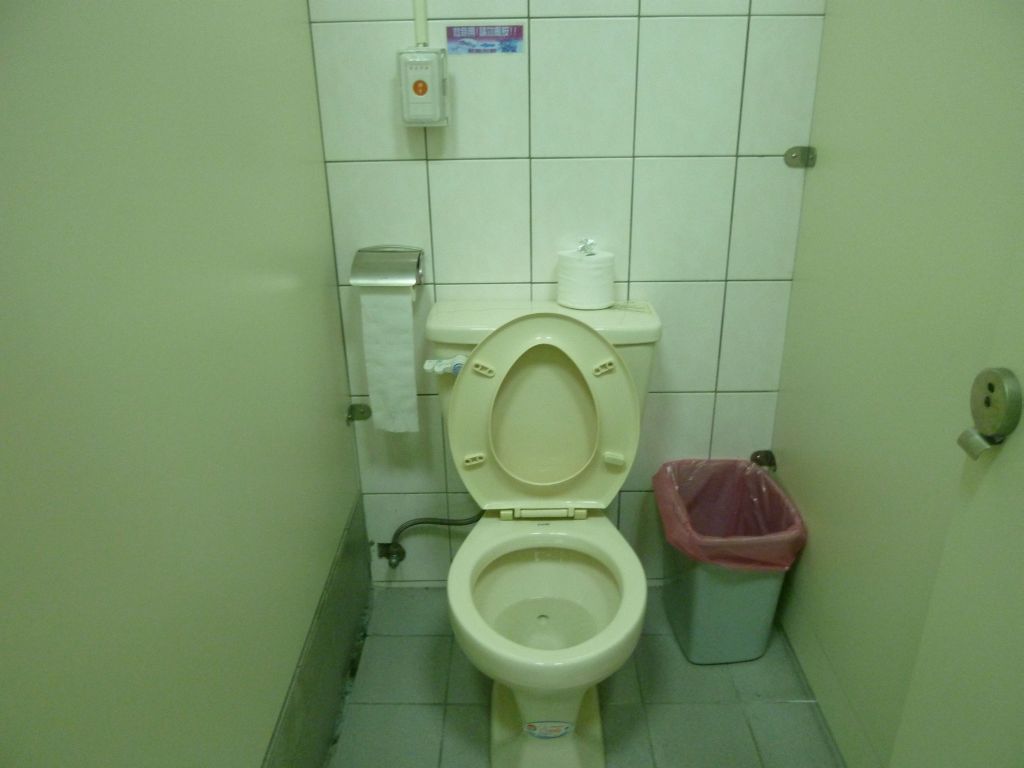 Arrival on the tarmac, where there was of course a passenger in fatigue in front of me.

My educated guess of the rationale of these movable stairs is that 1/ the steps are wider and therefore easier for passengers and 2/ that reduces maintenance expenses of the plane's door. 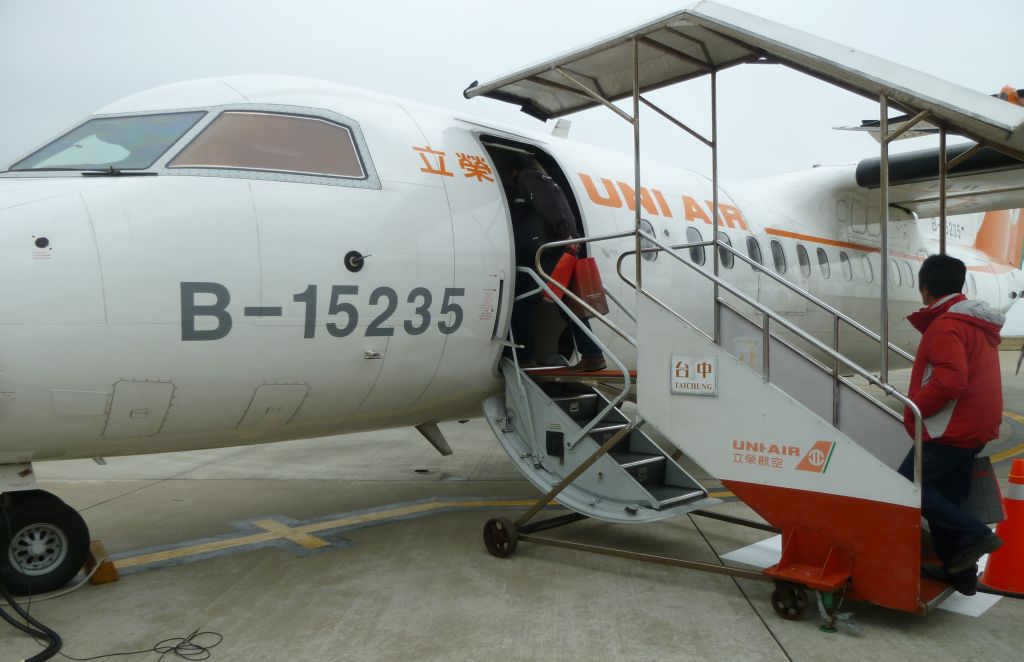 In case you have a doubt, this sign confirms that this plane goes to Taichung. 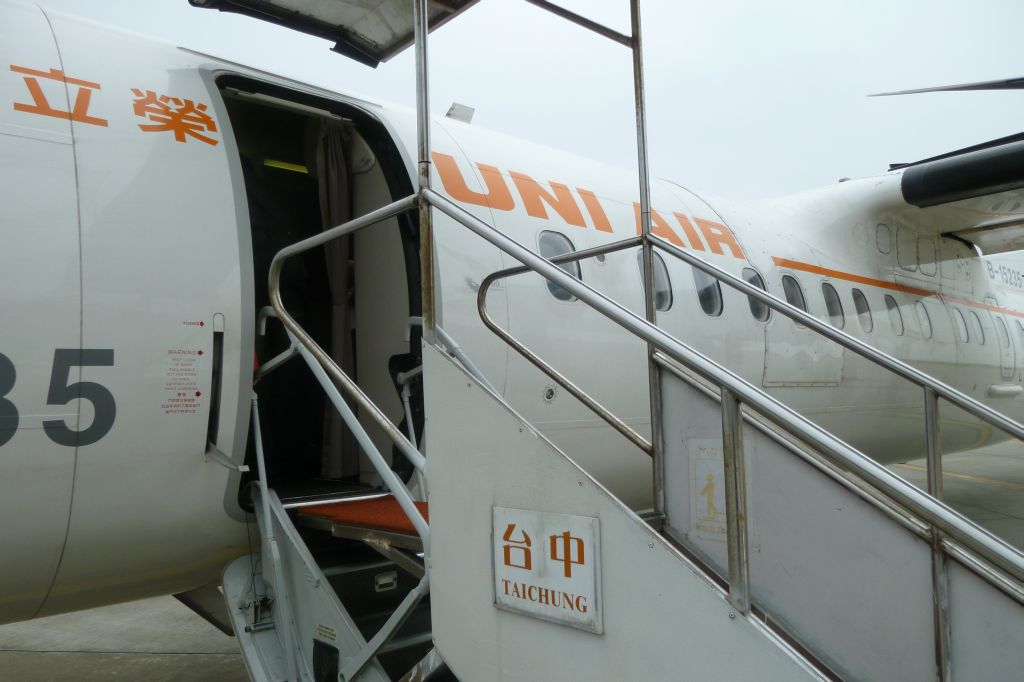 The coffee was the same as the one served on the way in.

The bad news was that the plane is half empty, but that one of the last passengers who boarded sat next to me, and was wearing fatigues. OK, he was doing his military service, but it did not facilitate picture taking, all the more than RMQ, much like MFK, is a mixed civilian airport and airbase, and therefore plane spotter-unfriendly.

I managed to take a few pictures of Taichung, a very large city with few tourist attractions. 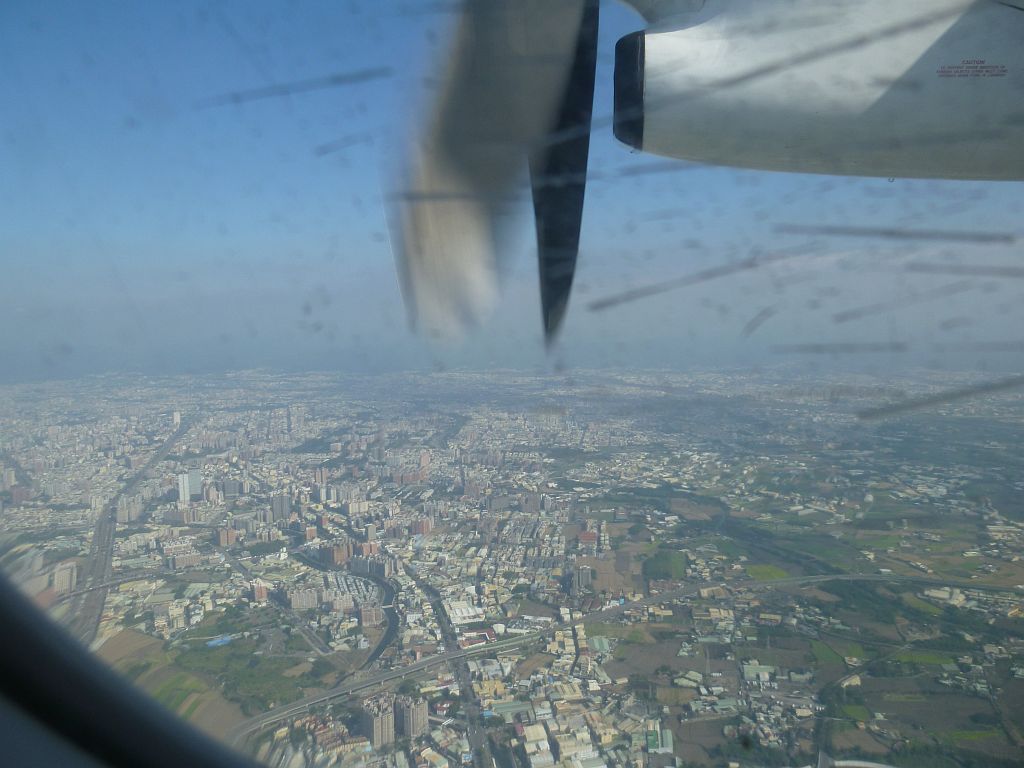 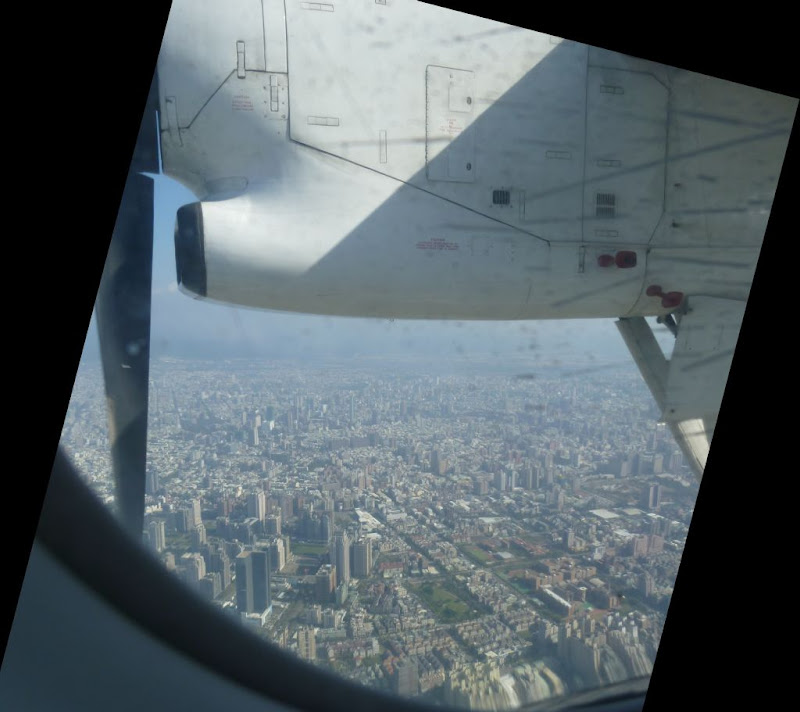 We landed on time on an oversize runway which ended with stopping nets. It had a definite military look, all the more than we taxied by hangars sheltering F5's. The good news was that the civilian part was isolated from the huge military facilities by earth levees, so that there was no constraint on pictures on the tarmac.

Again these mobile stairs to avoid using those of the aircraft. 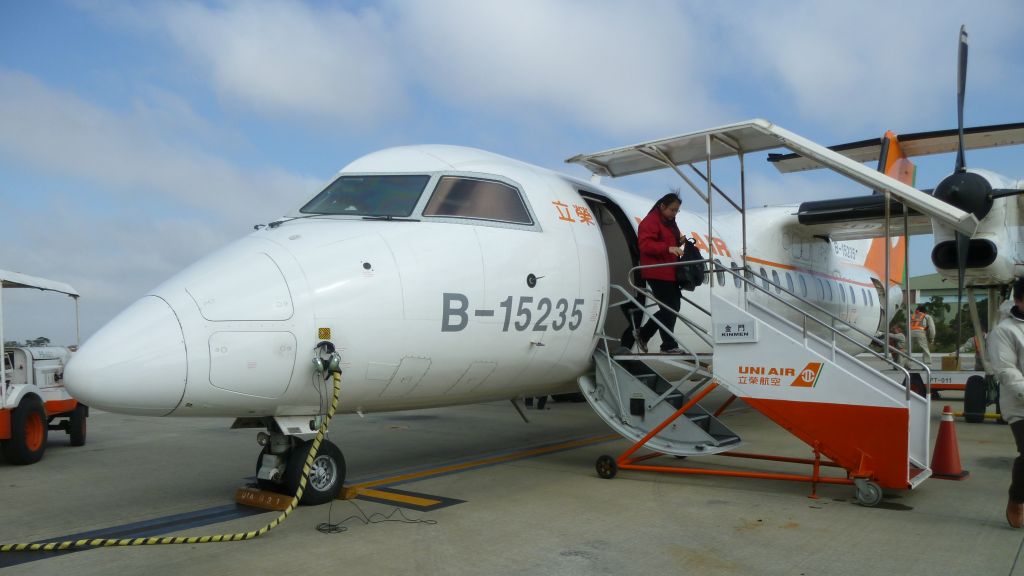 There are direct flights from Taichung to Mainland China destinations, hence the presence of that Hong Kong Express aircraft, at the far end of the terminal that I assume to be used for international flights.

On the other hand, this Mandarin airlines is probably operating a domestic flight

There was no separation between incoming and departing passengers. This picture of the safety check was not clandestine: I asked the policeman, because I was amused by the overhead sign detailing the area where raising pigeons is prohibited. This was the first time I saw such a sign, but I do know that in the plane vs. bird match, the latter can have a posthumous draw. 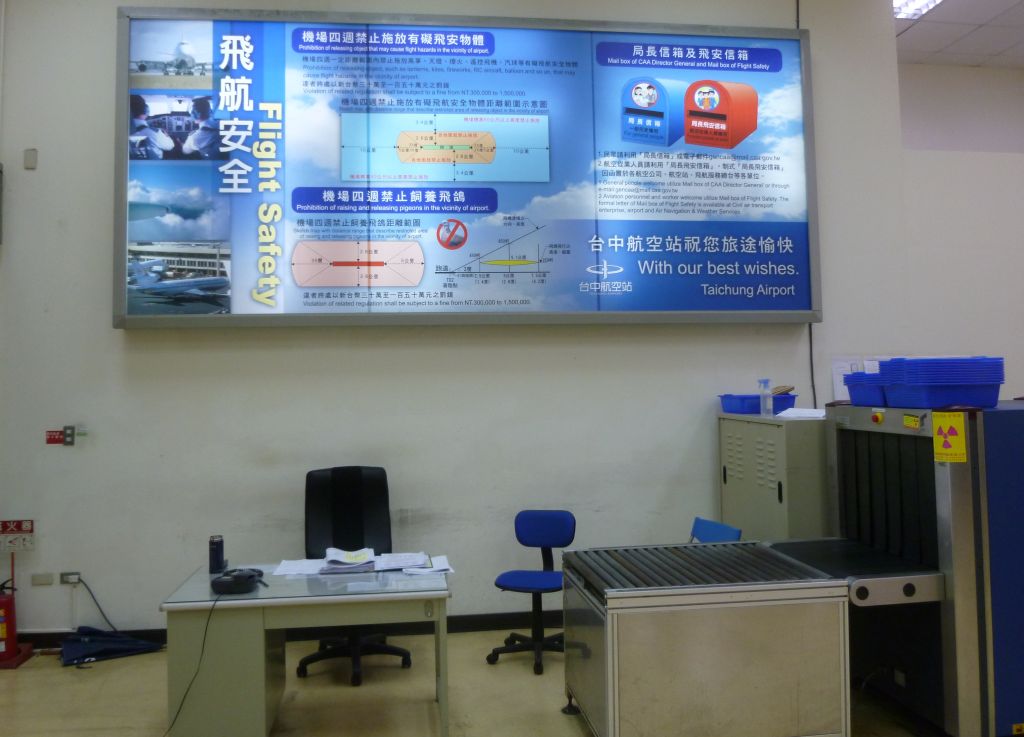 This was what the landside area looked like, with many counters reminding that there are international flights, and a tourist office which provided me useful maps and advice to spend the afternoon in a city that I had never planned to visit. The density and quality of the Taiwanese tourist offices is beyond anything I ever saw anywhere else. 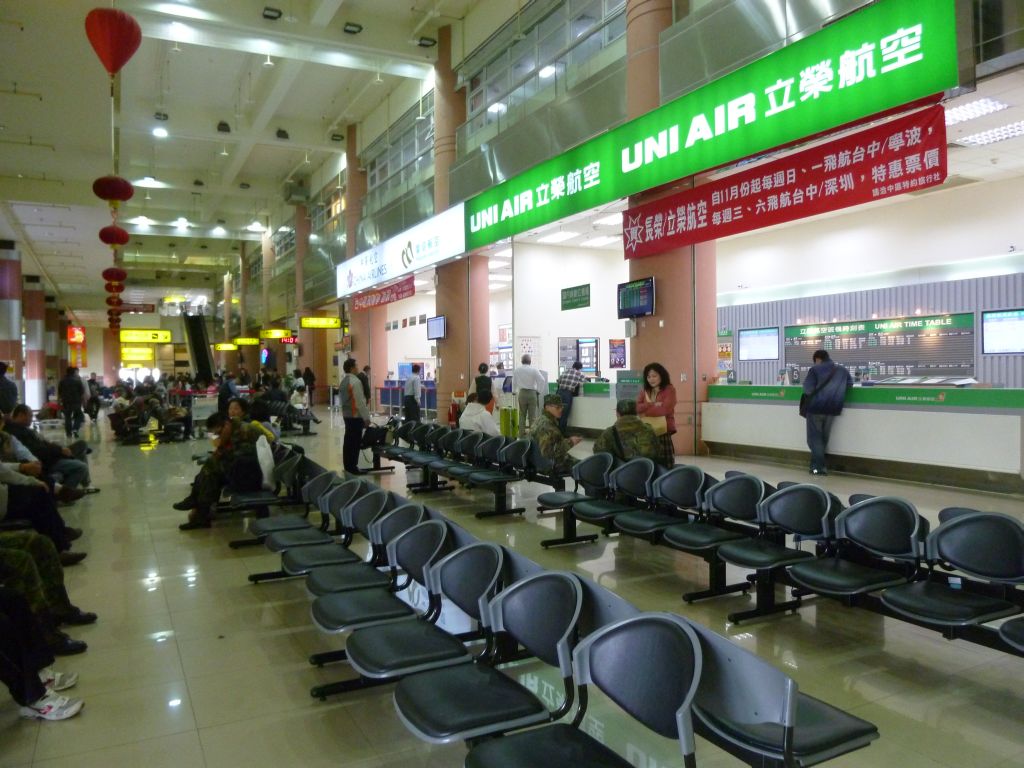 I did spend several interesting hours in Taichung, focusing on religious buildings (the nice employee at the tourist office originally suggested visiting shopping malls, but that was not my cup of tea). The menu was:

The Confucian temple, which was as peaceful as its counterparts anywhere in the Chinese culture world. Confucius is the protector of the educated people, hence the poster of a graduating female student on one of the pillars (a male student in the same attitude was on the other pillar).

That did not stop youths from taking creative pictures 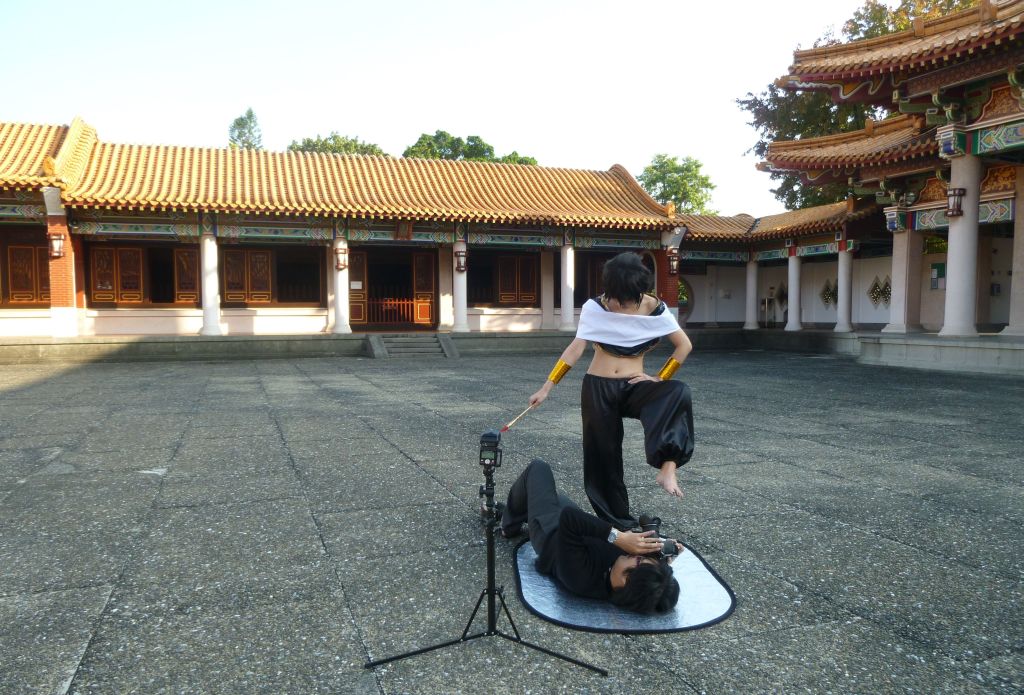 The Catholic Church, whose steeple is crowned by a statue strangely identical to the one on the church of Sheshan, in the outskirts of Shanghai, and that I have seen nowhere else. 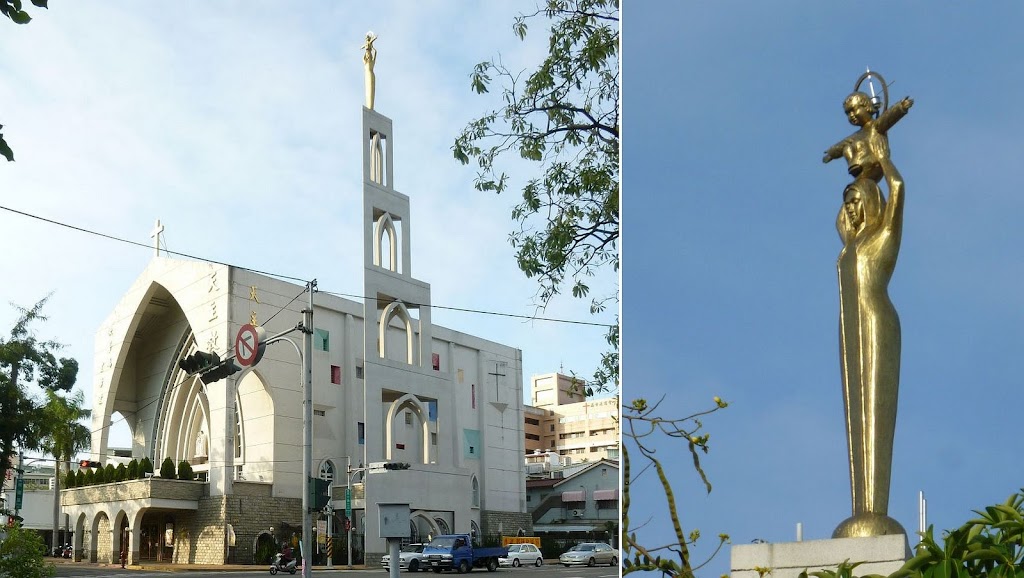 And the Paochueh temple where I had a fascinating private tour with a young English speaking volunteer. 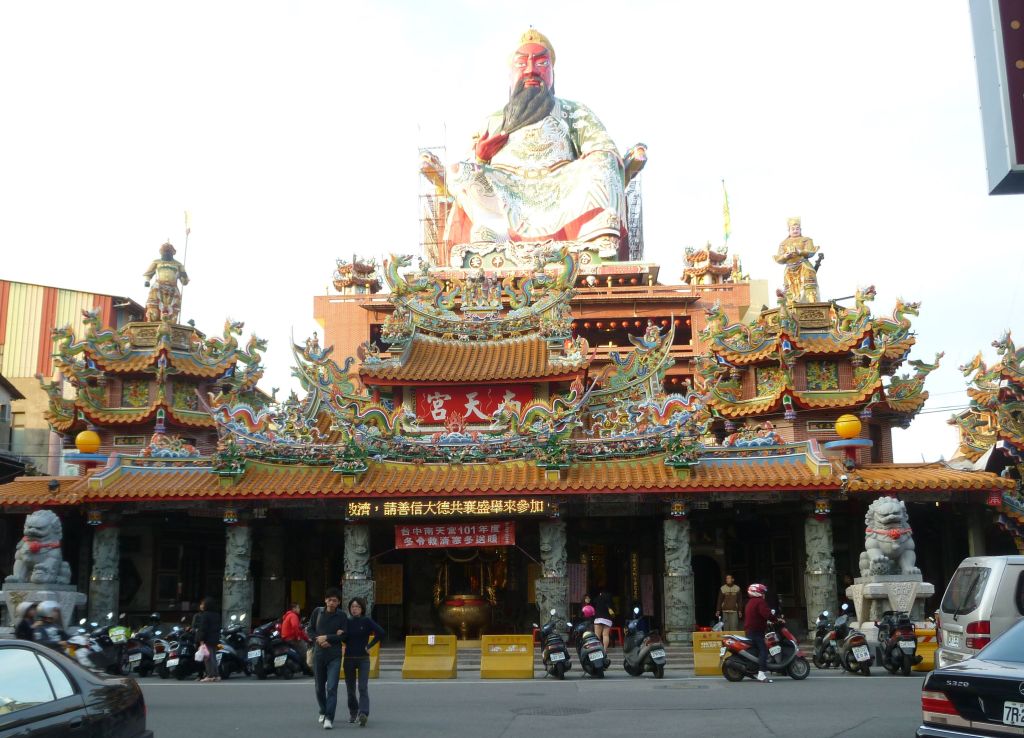 I won't dwell too much on the trip back to Taipei. This is not a new airport terminal, but Taichung's high speed rail station; the high speed line killed all the domestic lines between Taichung and the other cities of Taiwan's main island. 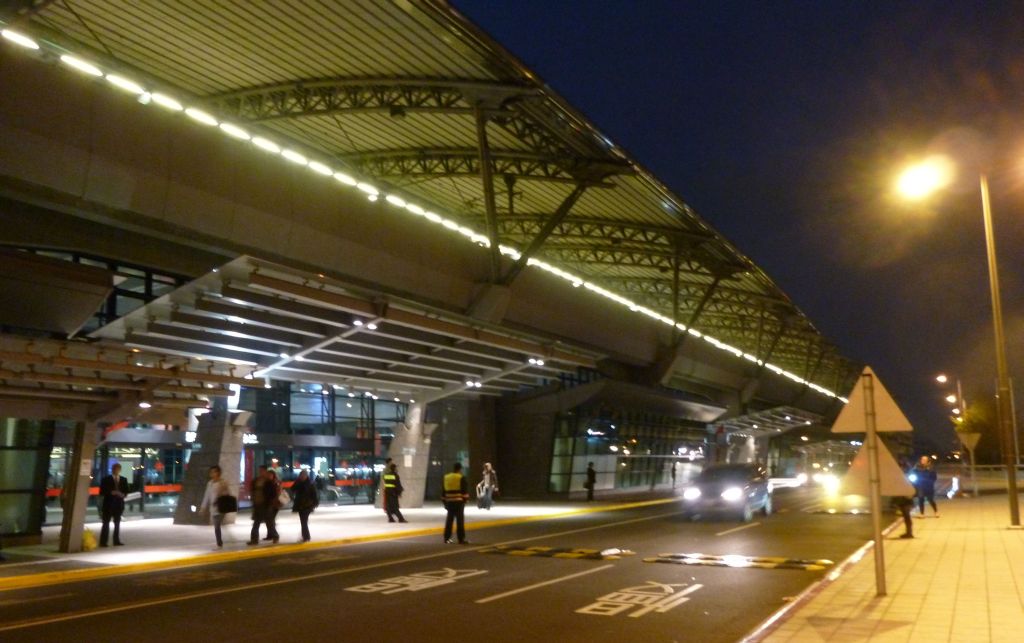 This is the high speed train – I took the picture in Taipei's main station. 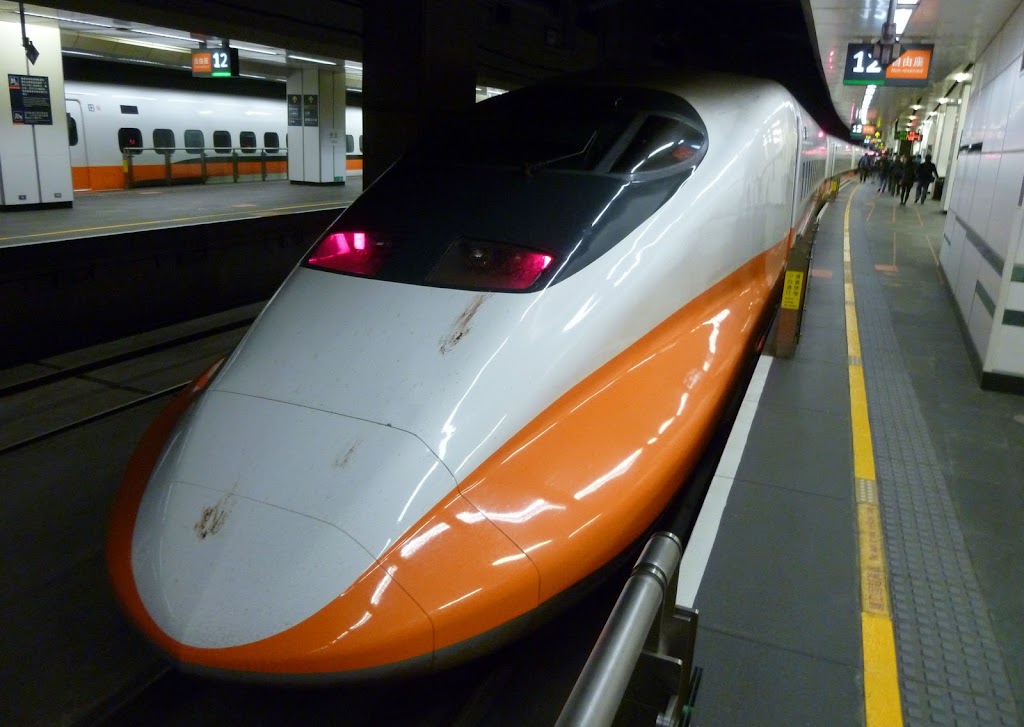 I don't dwell too much on the train segment, because this premature return to Taipei on Saturday evening provided me an opportunity to attend the last events of the presidential and legislative campaign, before the election on Saturday 14 January.

For the local elections of November 2010, I mostly followed the DPP (the main opposition party), so this time I went to the giant meeting of the KMT, the ruling party. No matter whether it is DPP or KMT, political rallies are very festive events, not to be missed, and that was a good compensation from the aborted trip to Shanghai.

This is a sample of my pictures that evening, with Ma Ying-jeou, the incumbent president, on the podium and on the giant screen.

Taiwan is a country where a foreigner without any kind of accreditation can be seated in the front rows of such an event, and even more official commemorations as I mentioned in the tourist bonus of this TTT-TSA flight report. You can't imagine the feeling of freedom after spending a couple years in Mainland China.
See more

In all fairness, that Uni-Air flight was in itself extremely bland, but it definitely was not a bland week-end.