By marathon SILVER 2689
Published on 5th November 2013
This is another series of flights in Mainland China from Taiwan:

Early that week, while the Europeans were worrying about Volcano Grímsvötn, the Taiwanese were worrying about Typhoon Songda. In a matter of four days, the depression had deepened from 980 down to 920 mbar, but had veered away from the island of Taiwan, and all risk of an impact on air traffic was removed. On the other hand, it did bring rain, which was welcome because there had been a rainfall deficit so far, but that reduced photo opportunities.

The forecasts at D-5 and D-1, respectively

Consequently, I did not worry when I went to the small Taipei-Songshan domestic airport to board Flight FM802 bound for the huge Shanghai-Pudong international airport. Arrival by subway: these four steps at the supbway exit are not some architect's mistake. There are the same at each and every underground station exit in Taipei, because typhoons can result in pouring rains, and even worse, catastrophic flash floods. Taipei has very bad memories of the 2001 floods which drowned a significant part of its network. There is a ramp on the side for the wheelchair handicapped, and anybody with heavy luggahttp://flight-report.com/fr/report-322.htmlge.

Shanghai and Taipei are some of these cities which have two airports, domestic and international: SHA and PVG for the former, TSA and TPE for the latter, which multiplies the flight combinations, even though the TPE-SHA route has the lion's share. The international traffic in TSA is limited: seven flights from 9am to 1:45pm ! No need to say that the wait at the immigration is negligible, even though only two positions were opened. 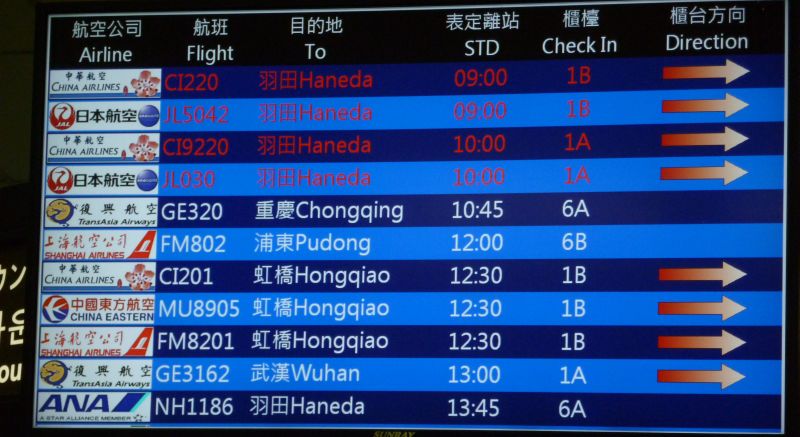 And once immigration and security checks are done with, you are is nearly desert and noiseless terminal. 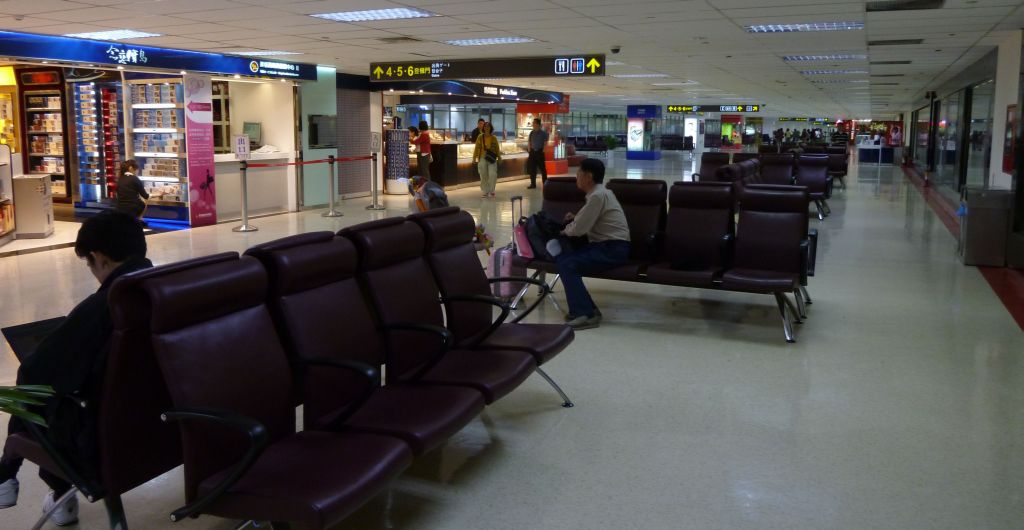 While parents surf on the Internet, a kid can play with on a flight simulator in the cockpit: both are free! [Translator's note: this picture is history; this equipment has disappeared in the course of the renovation of TSA's international section] 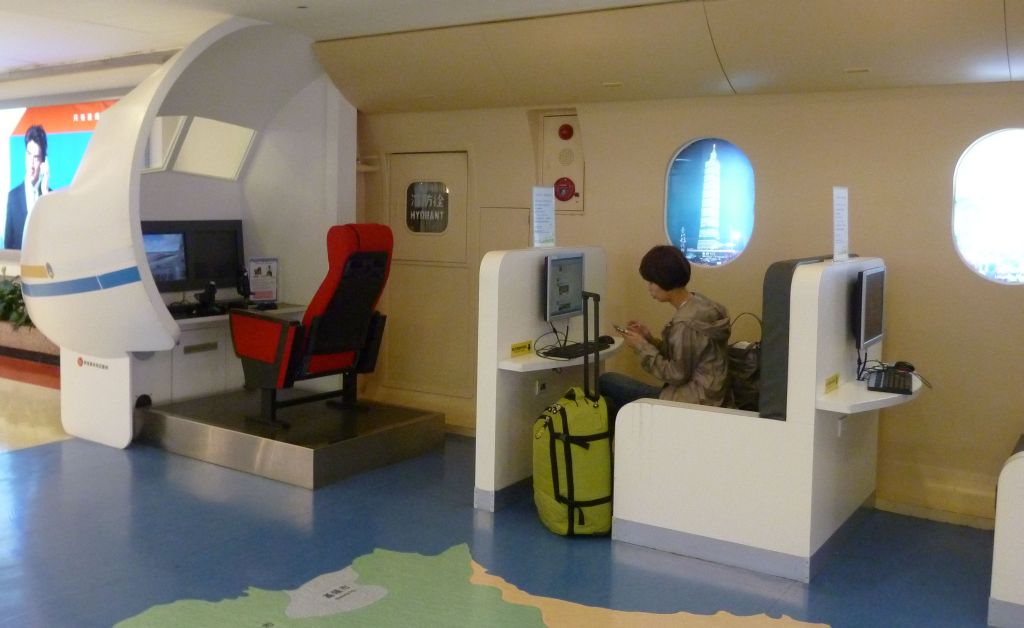 There are nevertheless some souvenir shops, including these tropical fruit flavored cakes which are a Taiwanese specialty. 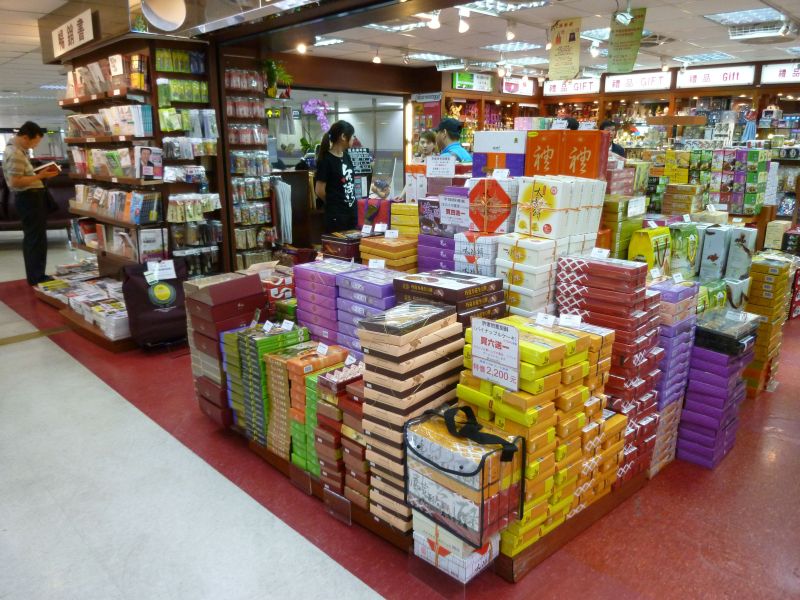 Some tourism promotional advertising on the glass partitions. Taiwan has a strong positionin a niche market which is little known in the West: the wedding pictures. There is an entire street in Taipei of sphoto studios dedicated to that activity, which is especially prized by the Japanese. Taipei is also with good reason proud of its cycling lane network, including over one hundred kilometers of lanes completely shielded from any motorized traffic in the floodable parks on the river sides of the protecting levees. 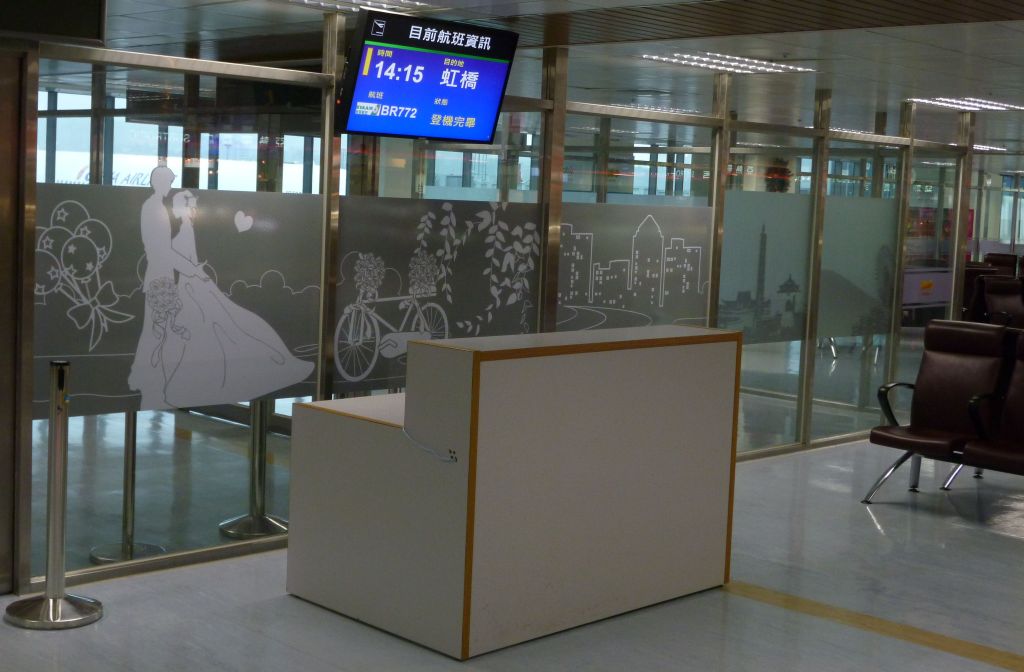 The plane arrived pier side from Shanghai – it is the flight that I'll take on the way back.

An outlook of the business class: 2 rows in 2+2 seating, the usual configuration in the Chinese 737 and A32x. There was only one passenger in J, whereas the load ratio in economy was around 90%. The seat pitch is decent, and the seats can incline by the width of a seat back. 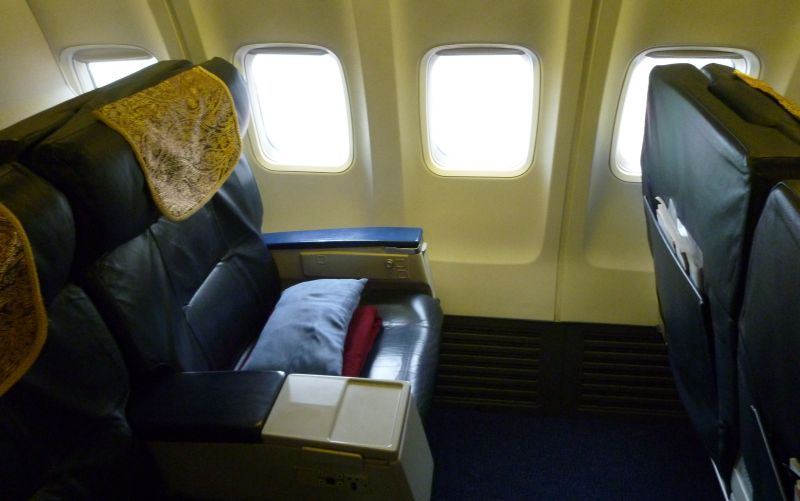 Take-off precisely on time; the weather is really not good. On the left, it is the Taipei 101 tower. 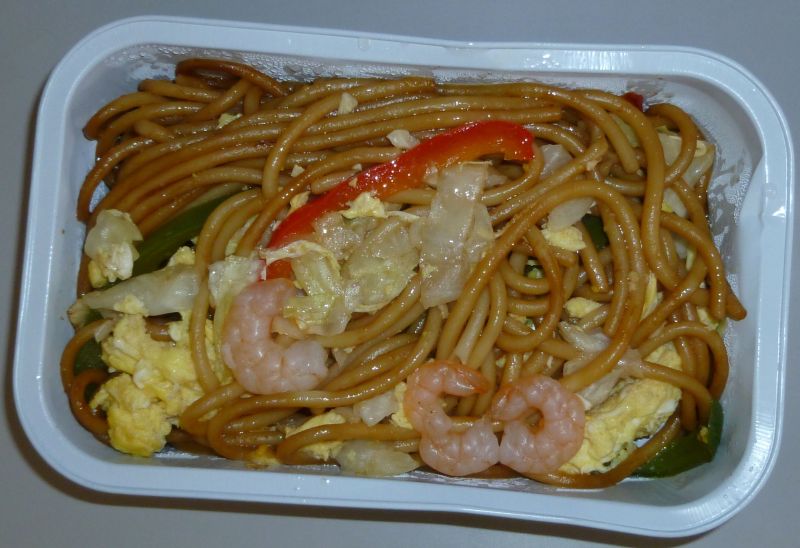 What is unusual in this Taiwan-China flight is the pineapple cake, which is THE Taiwanese specialty (re. the duty free shops). But careful scrutiny reveals that this is a copy made in Shanghai (and that there are 7g of butter). 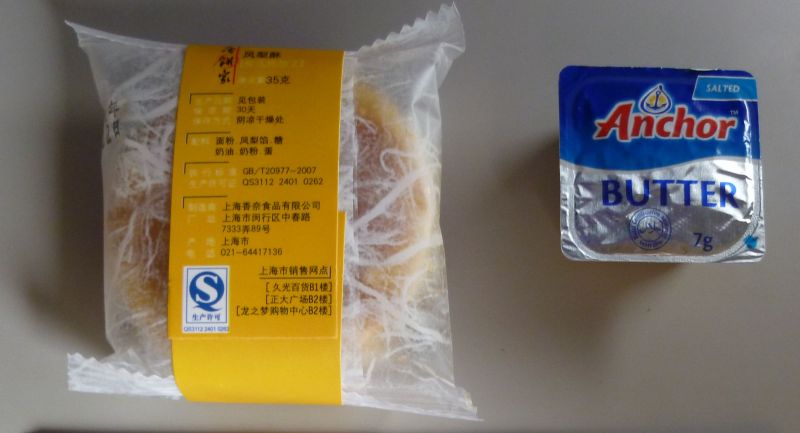 The coffee is with mile, and seriously diluted.

All this was served with a smile and a remarkable efficiency, since the flight lasted only 1h26. At the end of the service, the chief flight attendant made an announcement of the thank you for flying Shanghai Airlines kind, and the four flight attendants who had spread themselves in the aisle bowed synchronously. 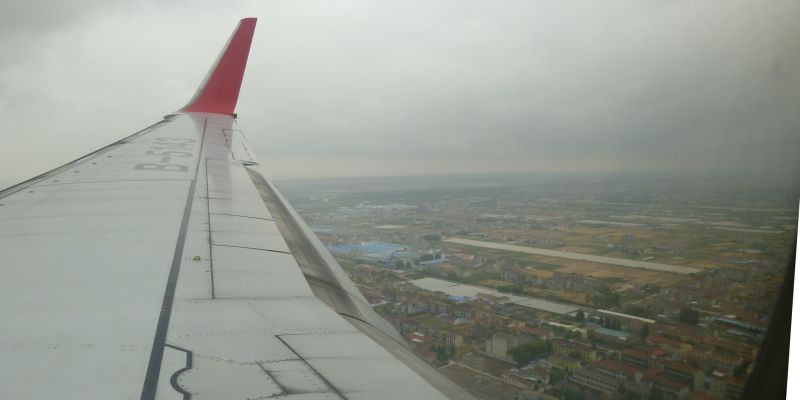 A lat look at the cabin. The headrests are in mint condition; the five ideograms mean Shanghai Airlines welcomes you (Chinese is a very compact language!) 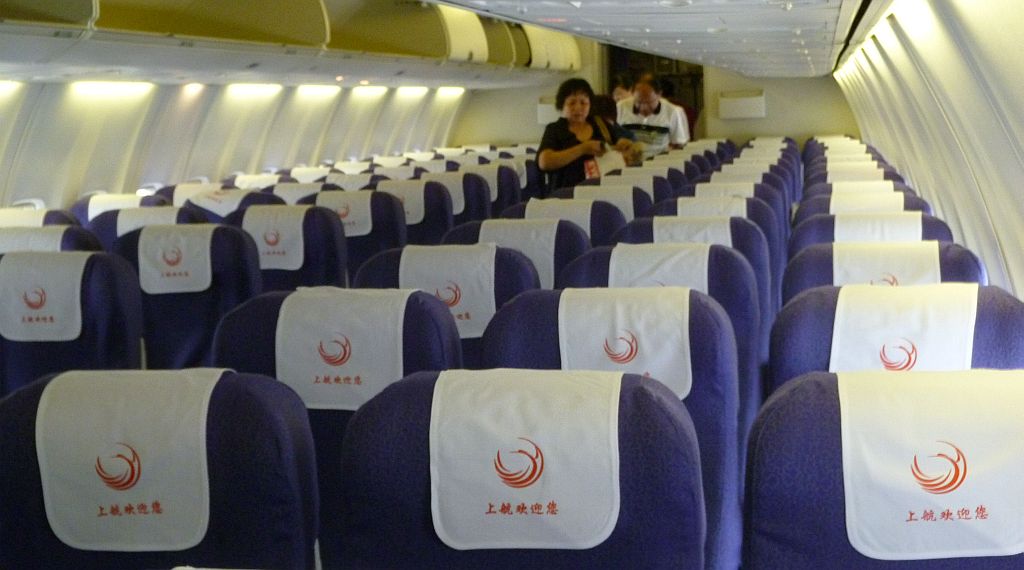 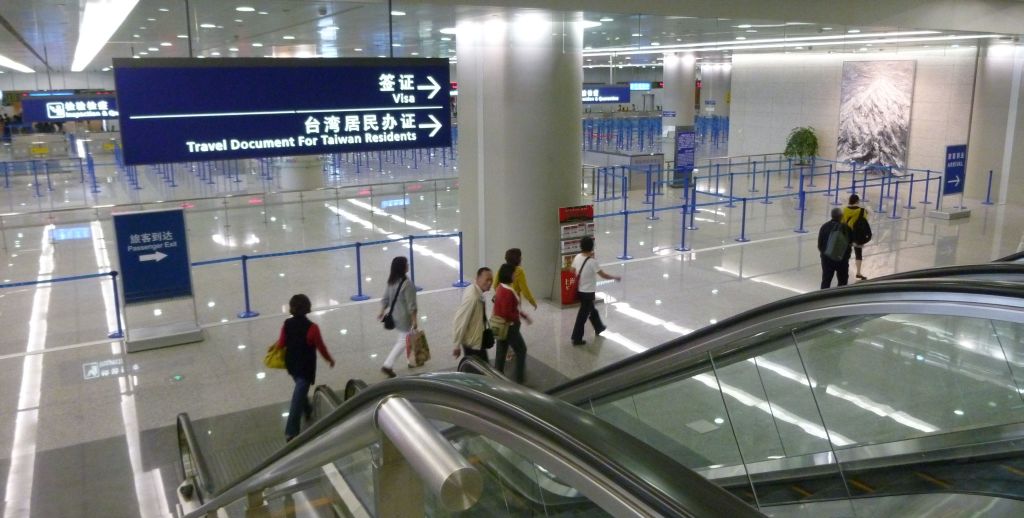 The Taiwanese receive upon arrival a quasi-visa (which is not a real one, since China considers that Taiwan is part of China), which can be obtained in advance, since there is of course no Chinese diplomatic office in Taiwan. This makes it complicated for non-citizen residents (like me) to obtain a Chinese visa : you have to go to or send you passport to Hong-Kong.

A view of the departures hall at Terminal 2

A Vietnam Airlines A312, the Shanghai Airlines 737 which brough me here and an Air Canada aircraft.

At one end of the building, this is the only place landside in Terminal where there are power plugs, and there is no signage towards them. 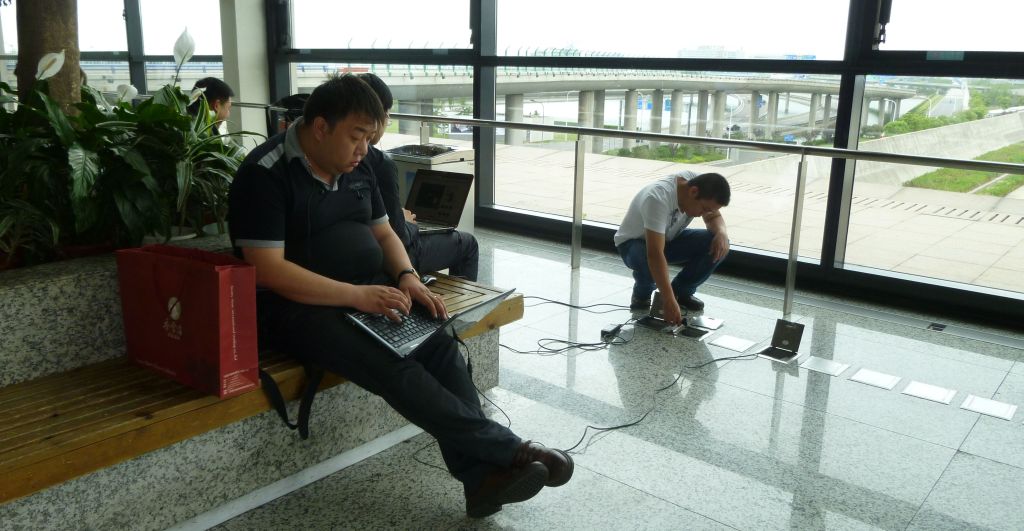 This flight is strictly similar to a Chinese domestic flight. Flight out of TSA is a bonus, since this airport is in the city center, with excellent bus and subway access.

The contributors of Flight-Report published 4 reviews of 1 airlines on the route Taipei City (TSA) → Shanghai (PVG).

The airline with the best average rating is Shanghai Airlines with 7.5/10.

The average flight time is 1 hours and 45 minutes.