By marathon GOLD 3335
Published on 6th November 2013
This was not the flight that I wanted to board. But some ten days before my vacation, an e-mail from the Chinese on-line travel agency where I had bought my flight ticket told me that flight FM9469 which departed much earlier from PVG was cancelled, and that my ticket was rebooked at no extra cost on that MU flight (FM is a subsidiary of MU). I did not have much of a choice, because the other options were from SHA and would save me little time with the added constraint of the long PVG-SHA transfer, or would have reduced to next to nothing my safety margins with my incoming flight from Taipei, and possibly with less favorable fares or cancellation conditions.

Good news: it was possible to check in immediately whereas in many Chinese airports, it only starts at T-120', which made it possible to spend that long waiting time in the much more comfortable airside part of PVG's Terminal 1. By day and by night, the ceiling is beautiful. 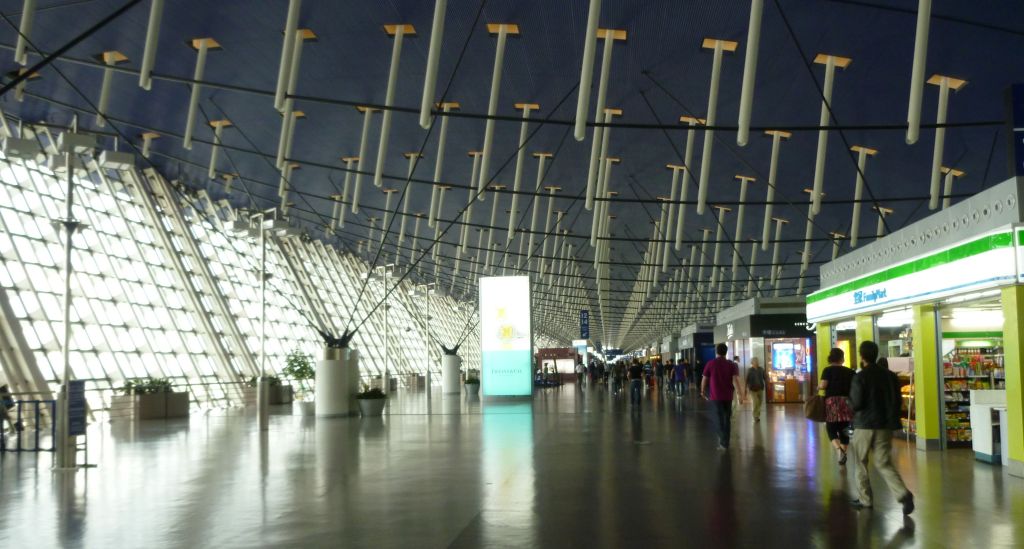 Despite a rather open view on the tarmac, plane spotting is very disappointing, because this is where all MU's domestic flights in its Shanghai hub are concentrated. I saw only a handful of non-MU planes, approximately one per hour. Nearly all of them were A320s. This multicolored one belongs to MU.

A Spring Airlines A320; this low cost airline based in Shanghai operated mostly from SHA's aging Terminal 1. 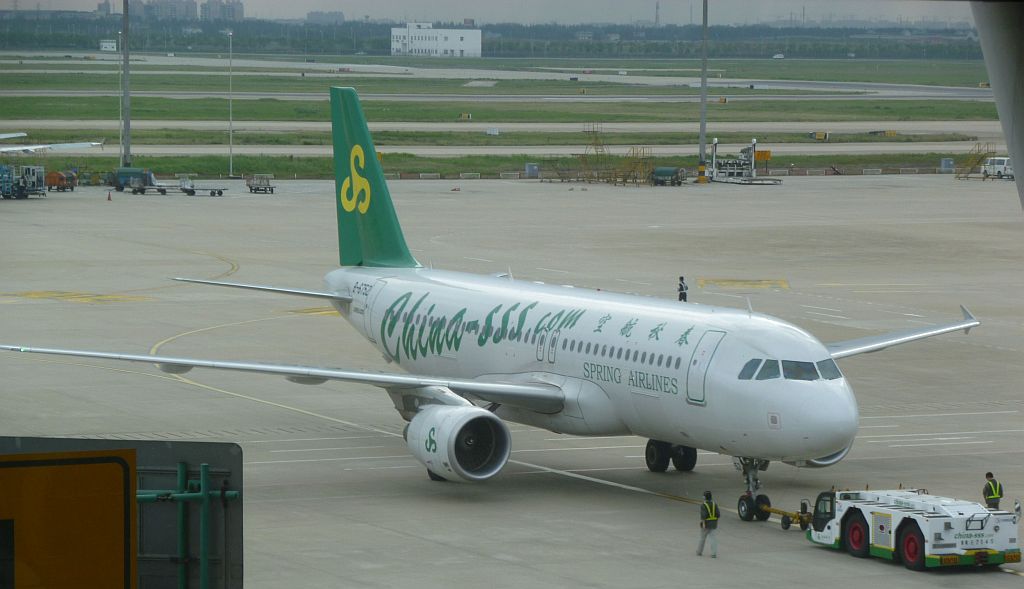 An A320 of Juneyao Airlines, which has no intention of remaining a small airline, with a hundred A32x on order. 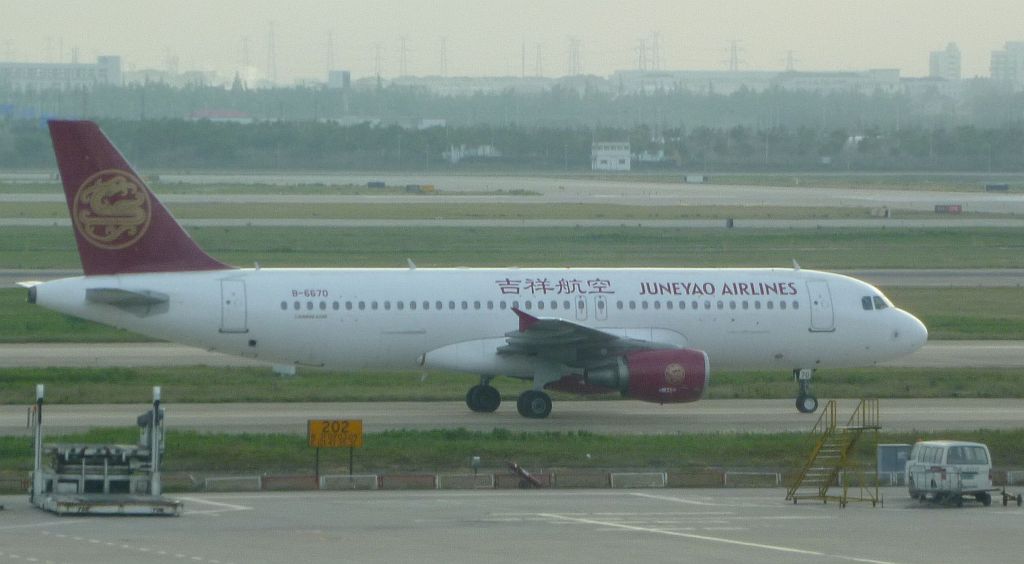 A Sichuan Airlines A321

I recently derided the rarity of children playgrounds airside, but I found this one in PVG-T1, even though it is much smaller than those in HKG. 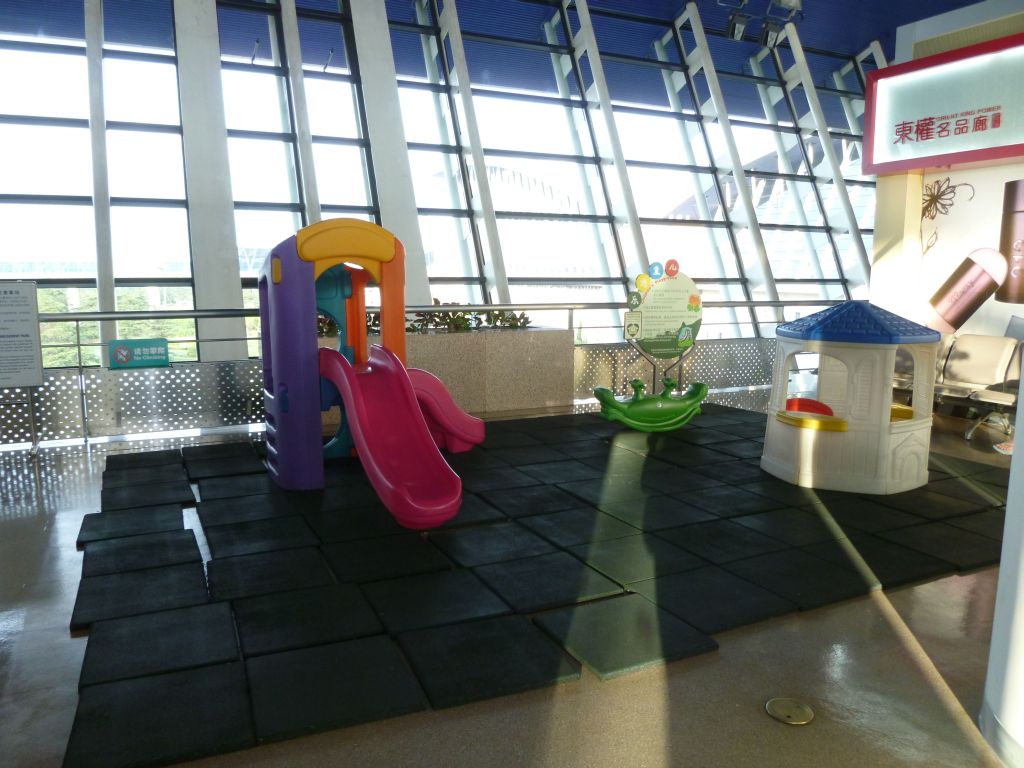 Outlets of this convenience shop brand are everywhere in Taipei. In general, the price of food in any airport's airside shops is high, but here, the instant noodles were priced at only 4 RMB a bowl versus 3.6 RMB in any shop in town. 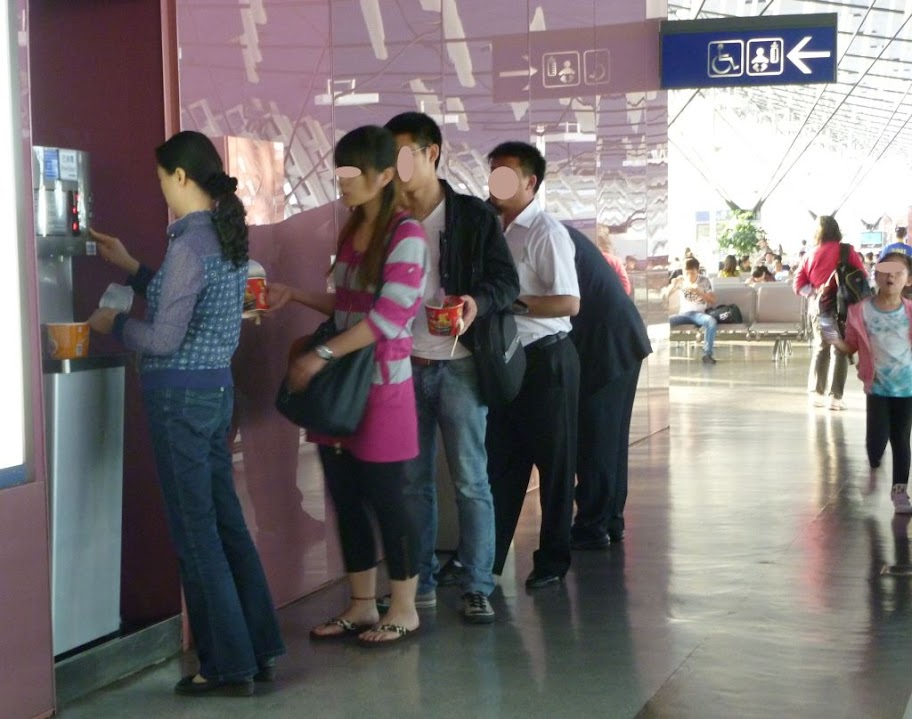 Next to that cold/warm/hot water fountain, there are electric plugs to recharge your portable anything, and an indication of the airport's free wifi but most of the websites that I am interested are blocked. 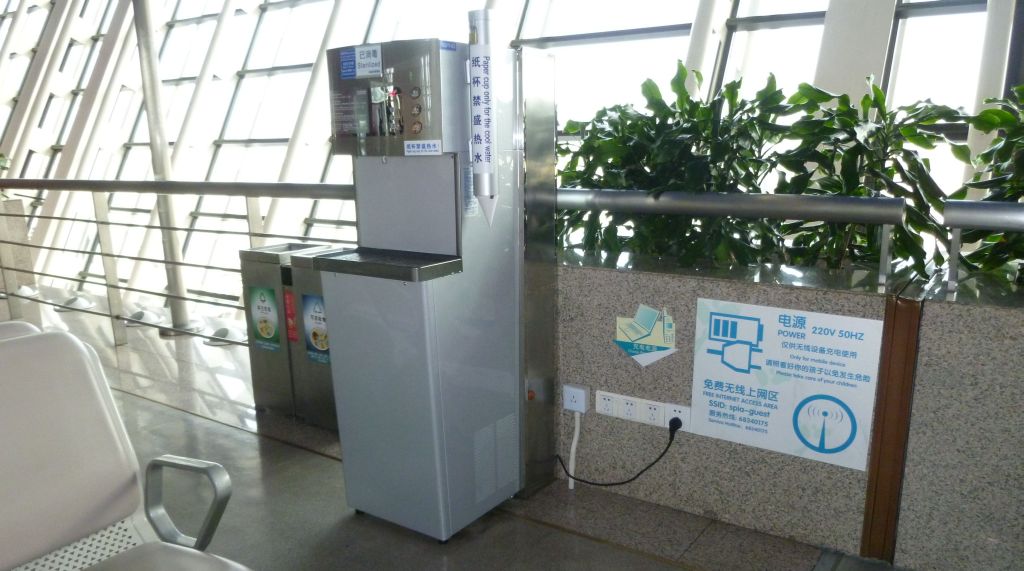 There are also self serve computers (without seats, to dissuade staying too long), and there the level of internet access is the ordinary Great Firewall fare, as the Chinese censorship is known. Flight Report is a no-no in China, but good news, Gmail is available again; it was blocked in early May.

Night falls, and we board at long last. 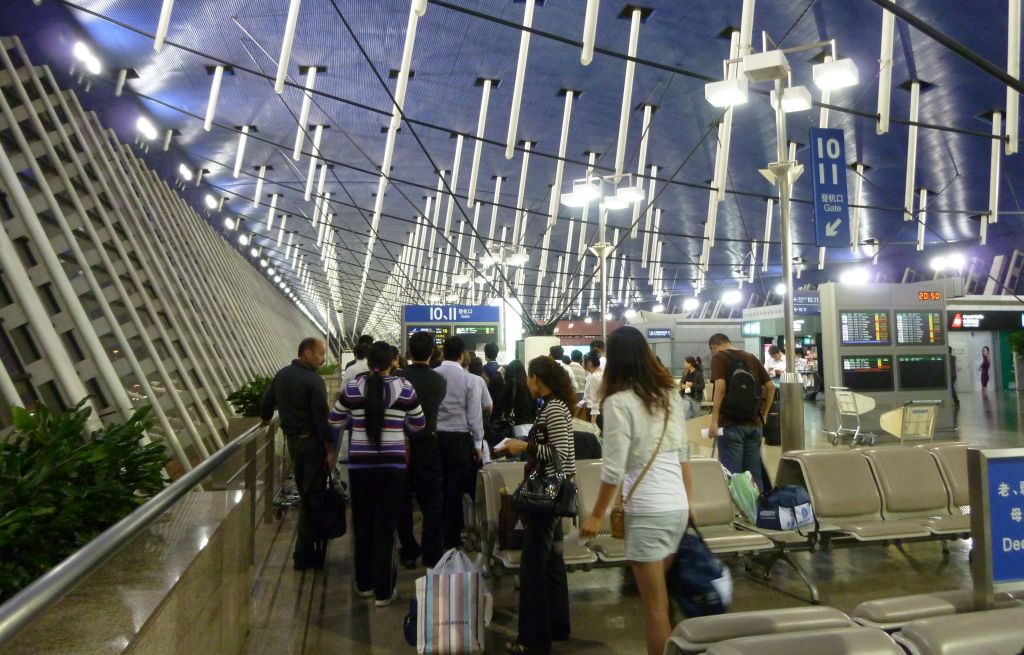 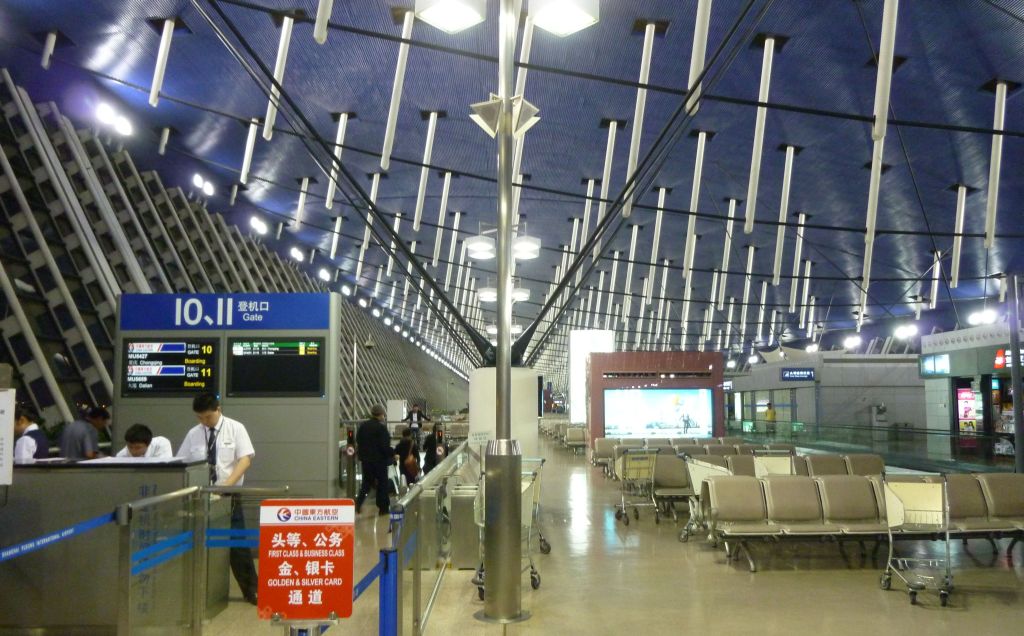 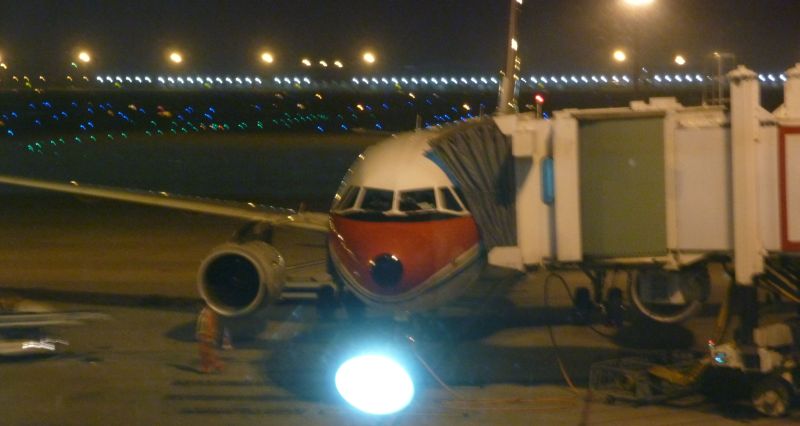 A quick look at the business class: two 2+2 rows, apparently empty as quite often. 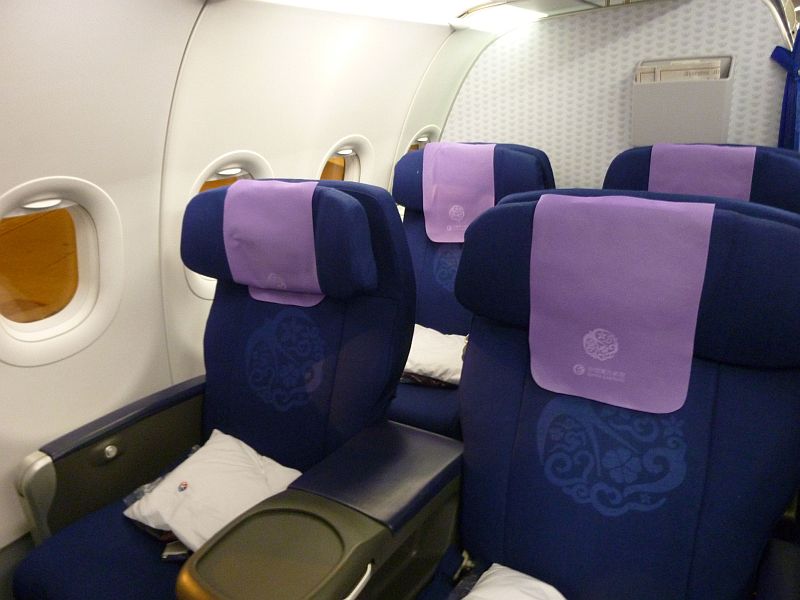 And the economy class, not far from being full. The comfort is standard Chinese domestic flight type, which means quite good; the seats backrest incline very slightly (as much as they are thick, approximately).

Drinks are announced: most of them non alcoholic, but I did see a bottle of wine. The coffe is with milk, but nevertheless decent. The flight attendant was very unhappy to be photographed (I was betrayed by the red focusing light).

And that was it! We did not see the flight attendants until the beginning of the descent for the standard safety checks.

(note: this was an example where there was the strict minimum of flight attendants on board, i.e. four due to the four pairs of exit doors, but probably fewer than 150 passengers).

This was the first time I had zero solid food on a Chinese domestic flight, possibly because the Chinese have dinner very early and that after 9pm, this is no longer time to have food for them. I regretted not having bought 4 RMB instant noodles in the terminal.

Landing a few minutes early, and a reasonably but not exceptionally quick luggage delivery (by Chinese standards). CKG moved recently to a new location and is still a relatively small airport, with two terminals with a traditional configuration, and little walking is needed.

But this will not be forever: a second runway is under construction; it may already be completed because the image on Google Earth was dated 2010 when I checked. This is nothing compared to the future enormous terminal, similar to PEK's Terminal 3, the two more runways in that plan displayed in the city's urban design museum. 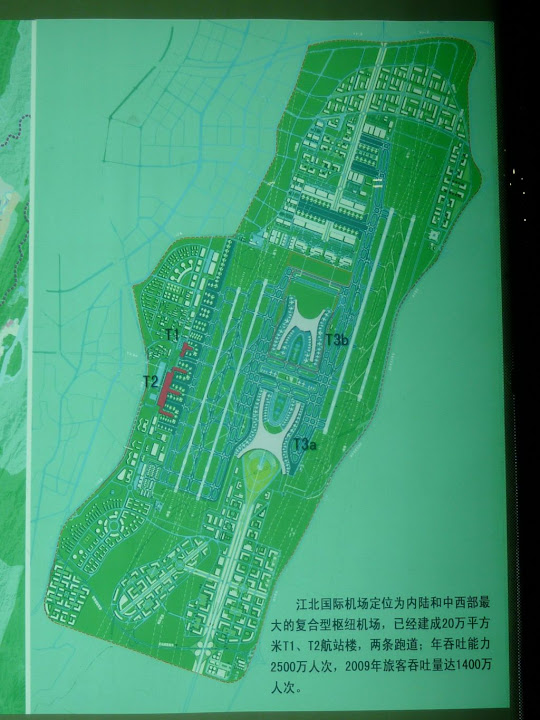 China Eastern is not my favorite domestic airline, and the absence of a meal this time did nothing to improve my impression. I reduced the punctuality grade because even though this flight was on time, the one that I had booked initially was much earlier.