By marathon GOLD 2418
Published on 9th November 2013
This is the fourth segment in that vacation in China :

Four terminals in a row: Changsha is a large airport. Flight FM9394 starts from Terminal 1, distorted by the panoramic view:

This is a view of the other terminals. From the little I saw of them when I arrived in Changsha, the most beautiful (or least ugly) is Terminal D which can hardly be seen in the background, but I did not have the courage to walk all the way to there through the parking lots.

Terminal A looks quite outmoded. There are only a few self check-in automata, in the foreground on the left. 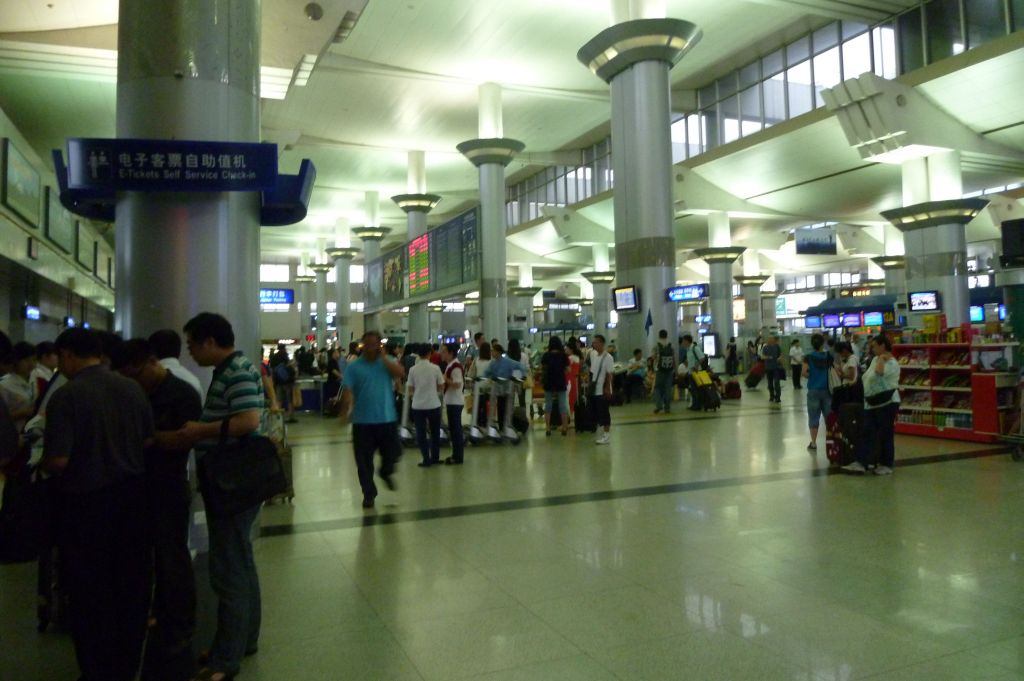 Check-in is quite ordinary. At the security check, even the quantity of the letters of the word quantity is limited (no the missing letters did not wear out, they never existed). 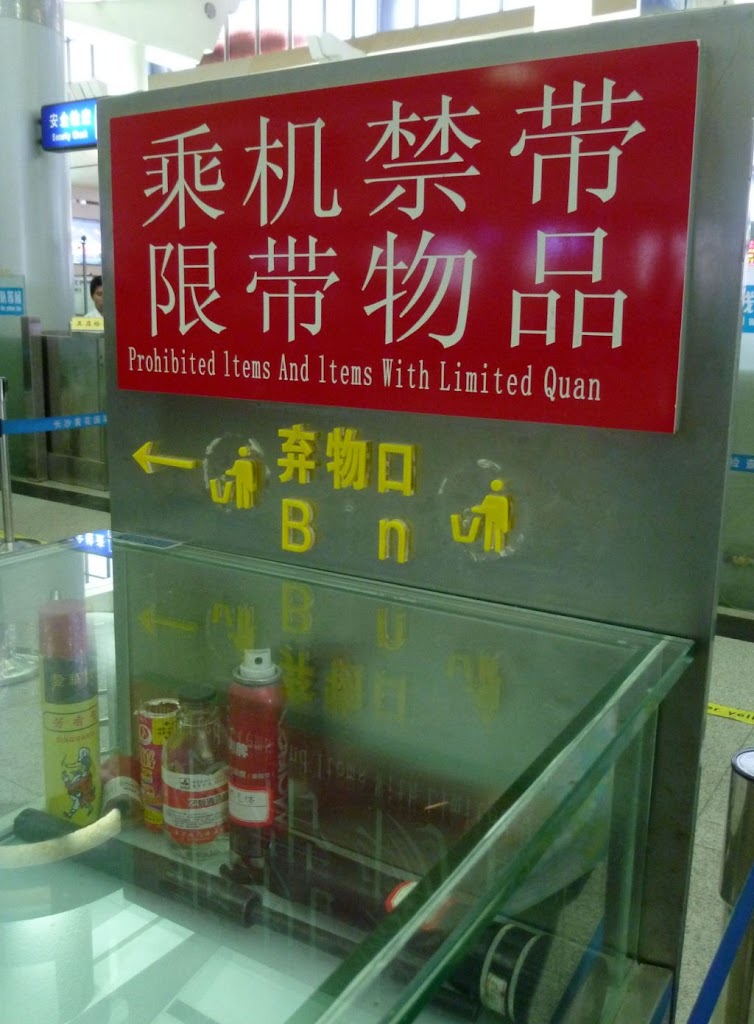 A terminal dedicated to the domestic flights of a limited number of Chinese airlines does not provide many plane spotting opportunities, especially since dusk is approaching and the sky is heavily overcast. An A320 and an A321 of China Southern; one has a white nose:

An example of non-winglet 737-800, here China Eastern (its subsidiary Shanghai Airlines also has some). 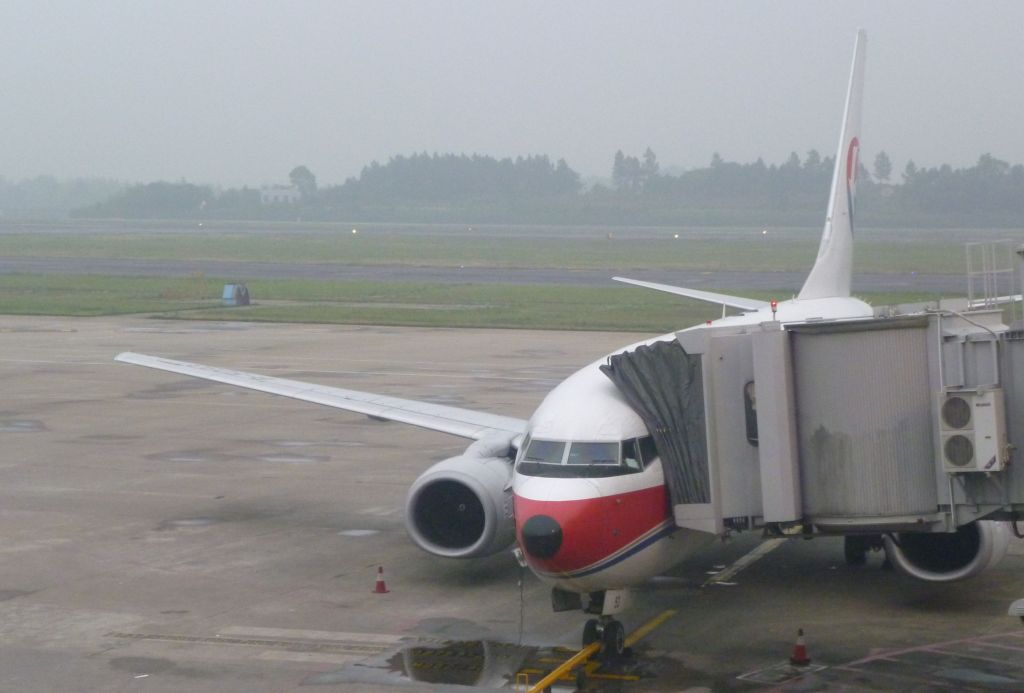 On the other hand, Xiamen Airlines chose the winglet option for its 737-800s.

A West Air A320 de West Air; I admit I had never hear of that Chinese airline. 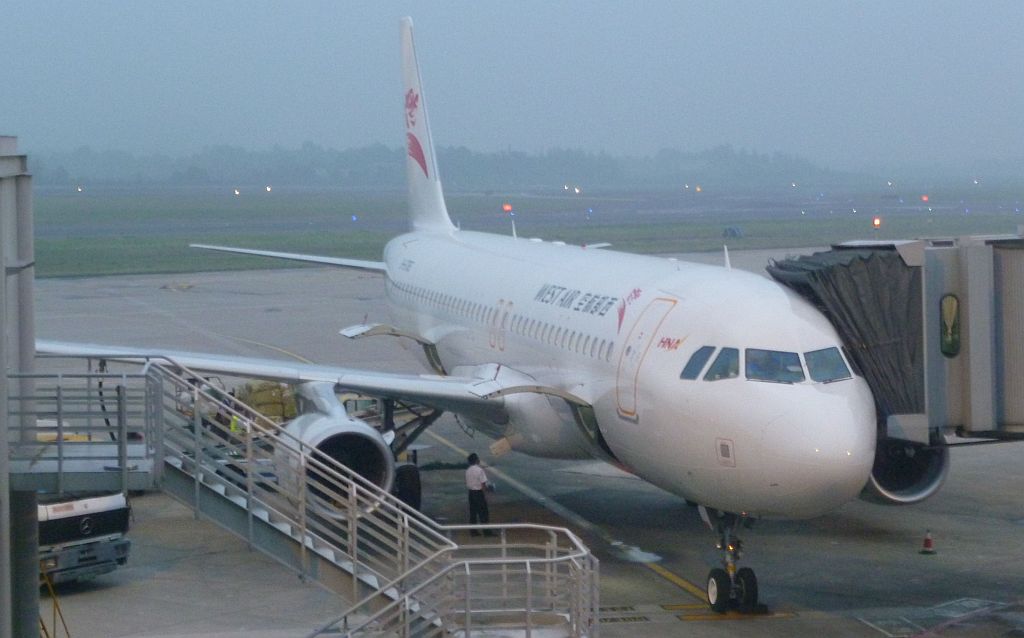 The most interesting plane was not on the tarmac, but in this airside shop: an AEROBUS A380 which I nearly regret not to have bought.

It would be boarding time, but the plane is announced late (in Chinese and English). This sign at the boarding gate confirms it. In the English version, it is due to the air traffic control, but in Chinese, there is the added information that there is rain and thunder in Shanghai. 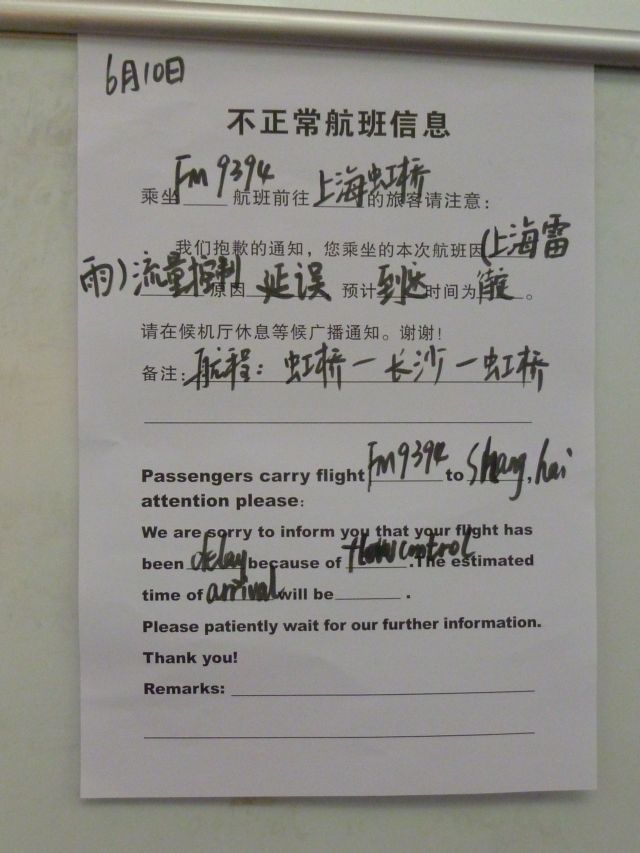 Somewhat later, the ETD is scribbled with a pen (in the Chinese version only): approximately 21:10, which means an hour late. 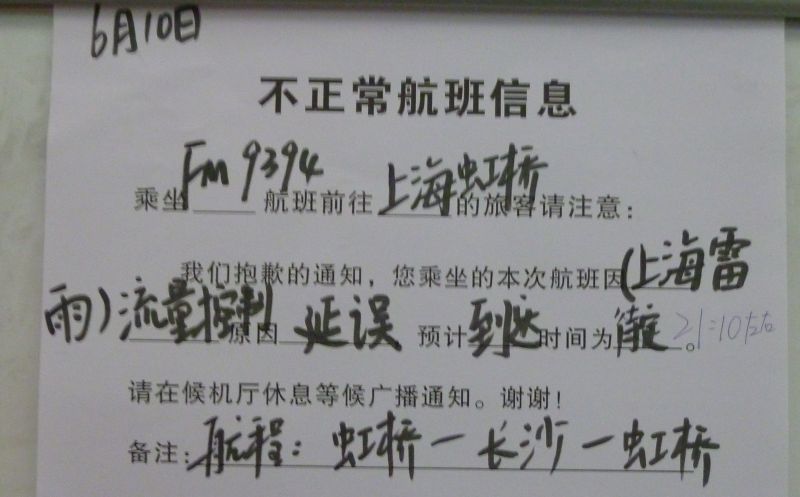 Having food on board a Chinese plane departing after 8pm is not guaranteed, but now, I feel safer to find something to eat, and I reach level zero of Chinese gastronomy : instant noodles. 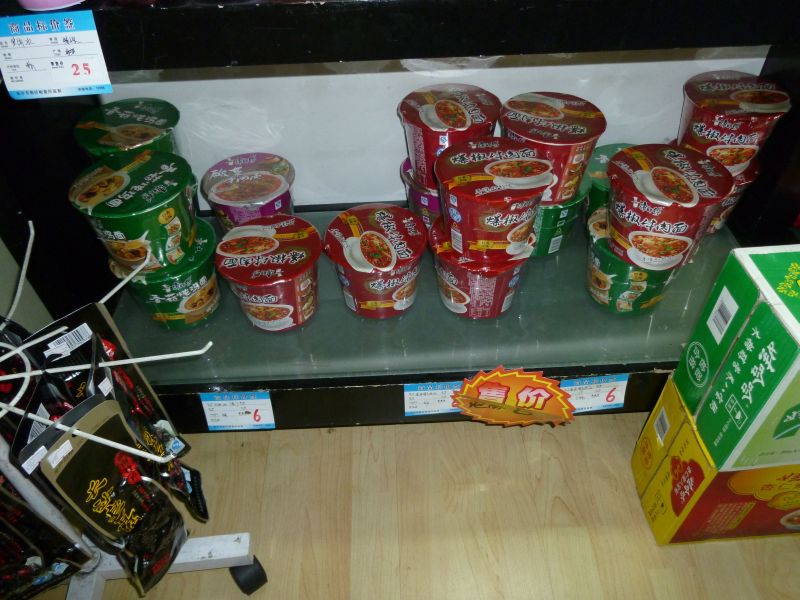 They are more expensive than at PVG, but even 6 RMB is very cheap, and there are carefully hot water fountains everywhere.

Unfortunately, it is only worth 6 RMB (and even 3.6 RMB in a normal grocery), and only when I had punished my stomach with this horror did I discover a new piece of information on the sign, again in Chinese only: the airline will distribute free meals. 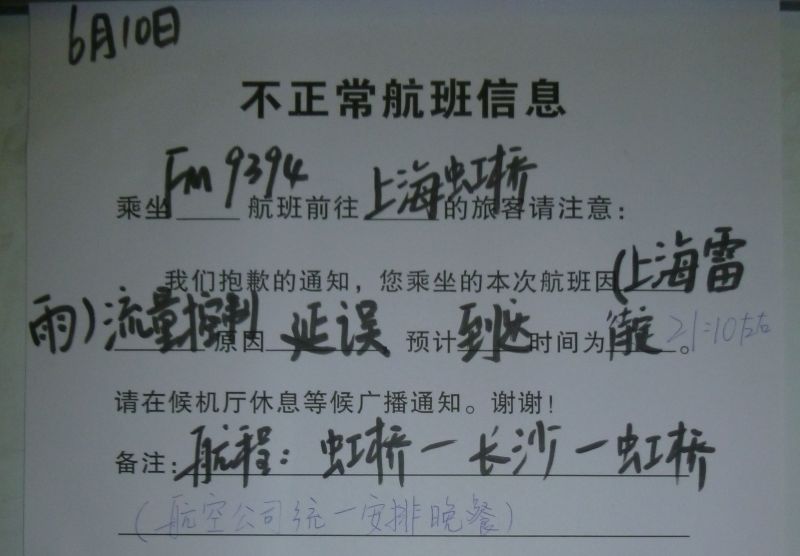 Ten minutes later, carboard boxes have been delivered at the counter, and an employee announces the distribution upon presentation of the boarding passes. 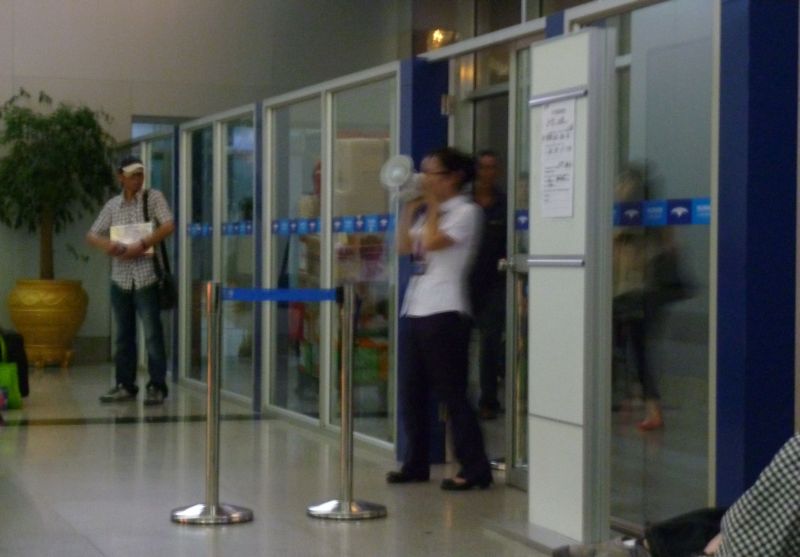 We receive a bottle of water and this lunch tray. I saw half a dozen appetizing apples which I presumed were for business class passengers. The boarding room turns into an improvised canteen. 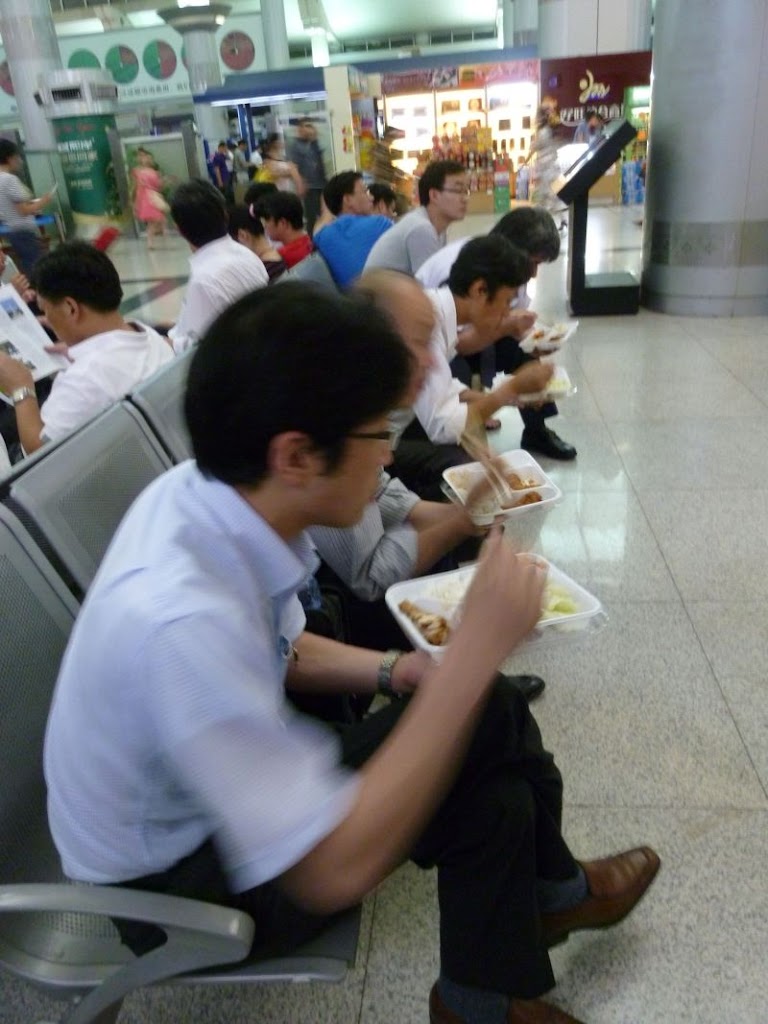 I feared the worst, but this dinner was actually quite decent, especially if you remember that it was ordered and delivered at short notice. No comparison with the horrendous stuff provided in similar circumstances by China United (see my FR on Flight KN2927 CTU-NAY). 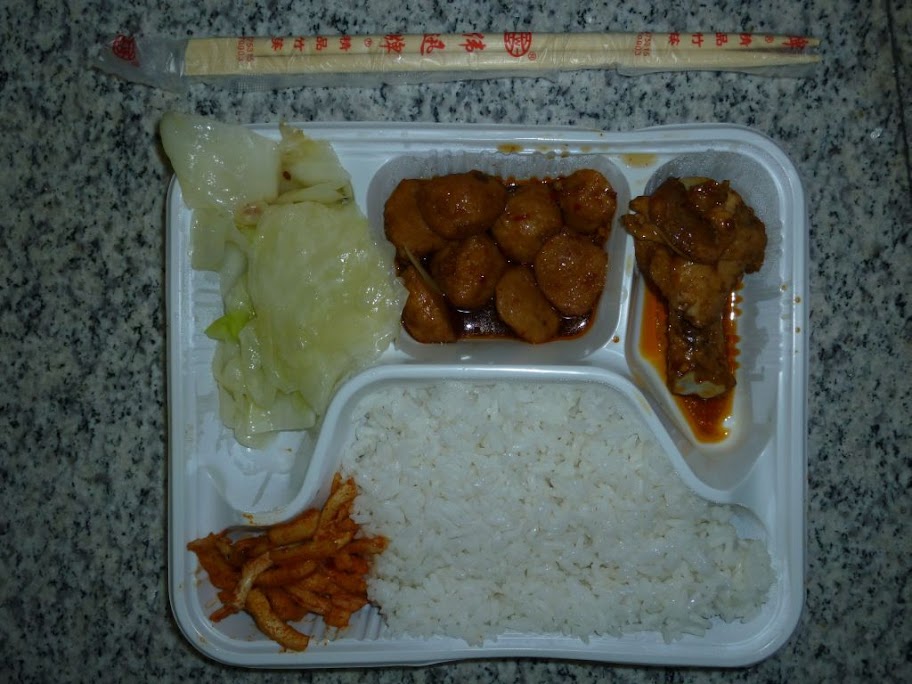 The flight appears to be full, or nearly so. A poor picture while going through the two business class rows, with old-fashioned but comfortable leather seats, always the same (see my other FR on flights with FM). 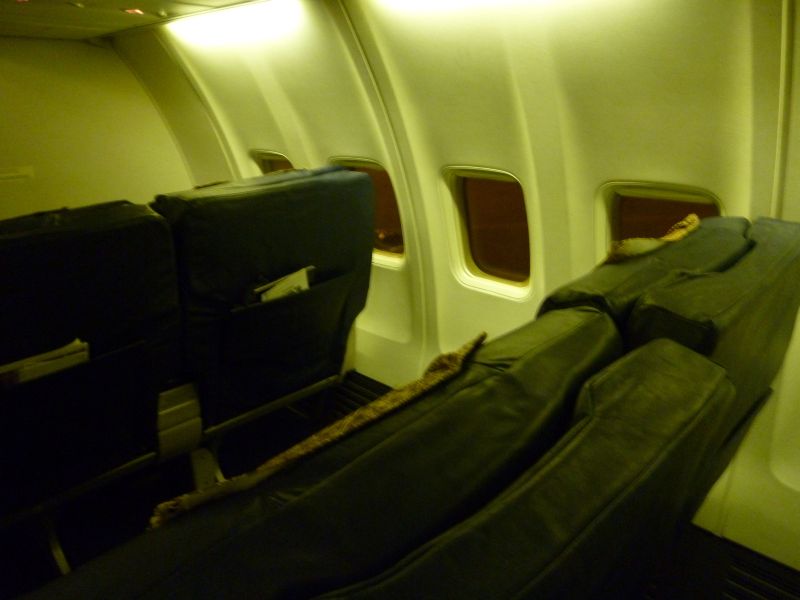 A last glimpse of Changsha, and take-off at precisely 22:00, which is 1h50 late, and announcement of a 1h30 flight (versus 1h45 according to the schedule).

Surprise: we nevertheless have something to eat, not a full meal, but a slice of cake and a bottle of water. The flight attendants are visibly tired, but nevertheless distribute it graciously and with a smile. 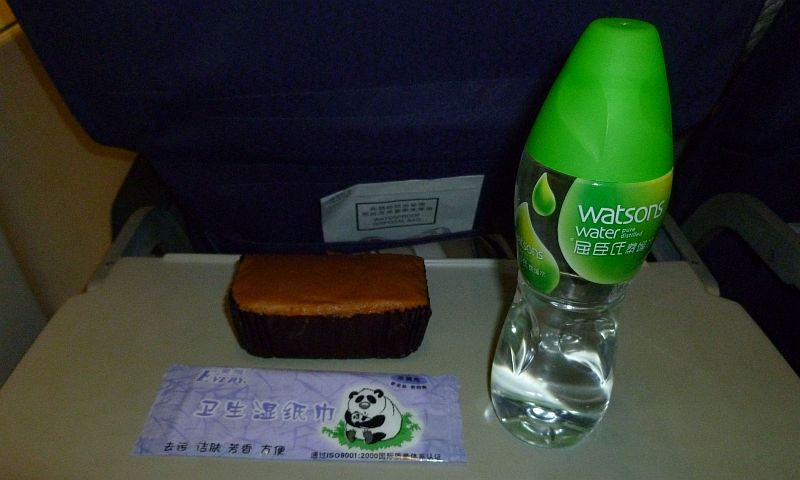 Another passage of the trolley with the only drink available: tea which apparently hardly interested anybody. FM loses one point due to the absence of coffee, with or without milk.

The touchdown could have belonged to a promotional video for FM: the pilot performed a magnificent kiss landing with a textbook final flare. It was by far the smoothest landing I ever had in China, according to my memory. One comfort bonus point!

No miracle, on the other hand: the plane parks away from the terminal at 23:31, and a bus is waiting for us. 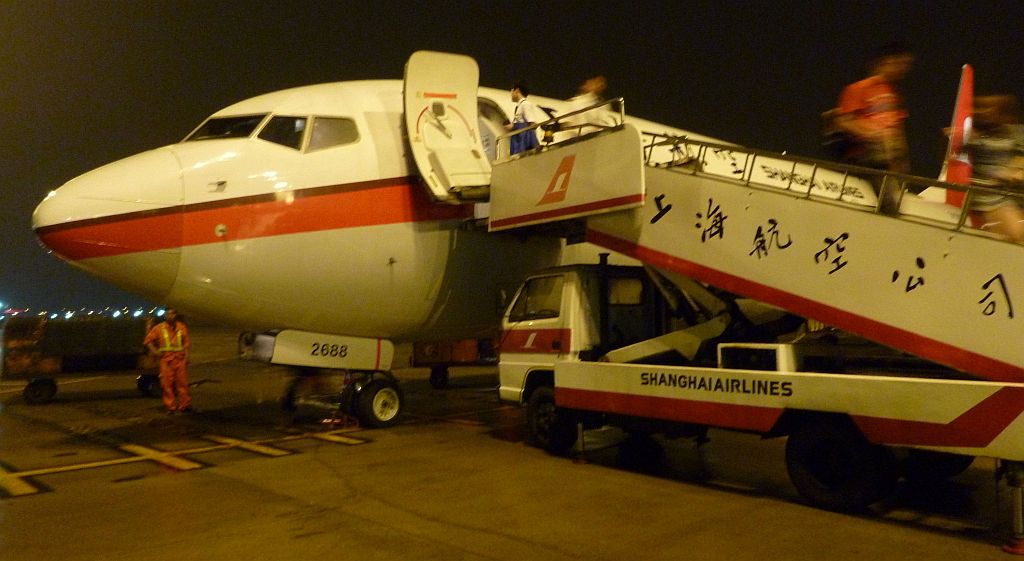 A last look at the inside of the aircraft, which is very much like all others in China. 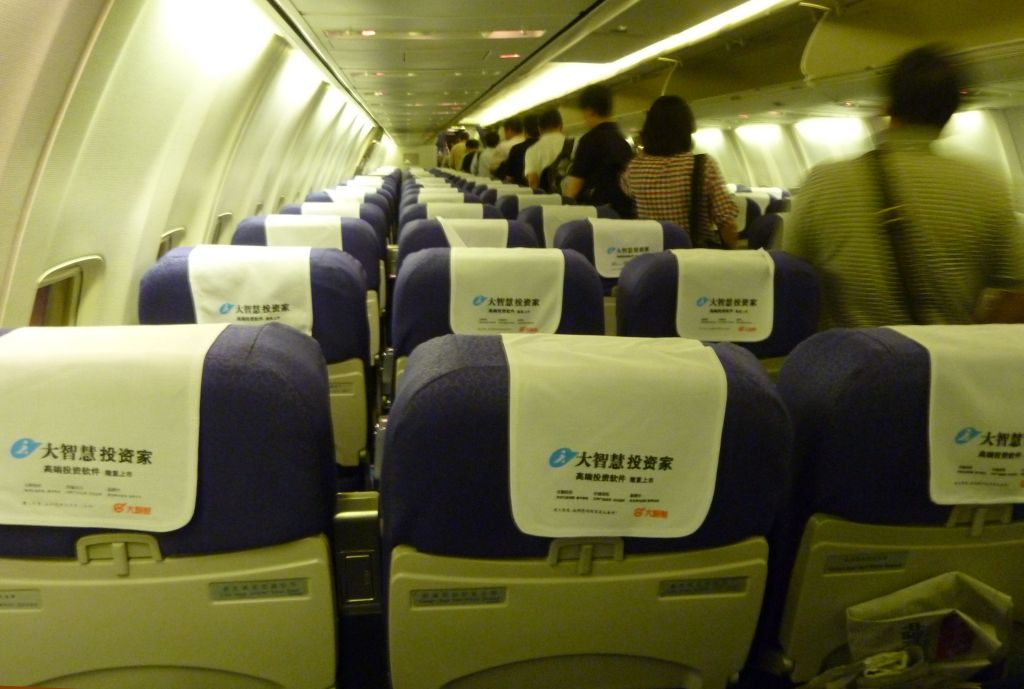 I reached the luggage delivery room at the same time as my suitcase. At the place where the corridor splits between luggage delivery and direct exit (a peculiarity that I have never seen anywhere else), I noticed that a vast majority (75 – 80%) of the passengers only have a small carry on luggage, and sometimes nothing at all.

It is too late to take the subway, the line at the taxi stand is gigantic. You see only one quarter of it in the background.

But the organization (by a very small number of employees) of a major Chinese taxi stand is incredibly efficient: the line is first split into two to reach one diagonally loading station on one side, with a dozen loading positions, and four parallel loading lanes below:

A drawing being better that a long description, this is the approximate layout:

The arrival in successive waves of passengers and taxis makes it possible to have them cross by directing alternately a block of passengers to the station with parallel lanes.

A similar system is in place at Beijing West train station, which is presently deemed to be the largest in Asia. Not only there is no cheating, but 17 minutes after joining a line which would have meant waiting for 2 hours at CDG, I was in a taxi which left immediately.

Shanghai Airlines takes a beating in punctuality on that flight. There is no miracle: late flights are the scourge of Chinese domestic flights, and the airlines are not responsible for that. These delays are due to the inadequate equipment of the airports, to the rather inefficient air traffic control which is handled by the military, and to the large amount of restricted military airspace, further constrained by additional closures for military training.

I hesitated on grading the meal: I had altogether more than usual, of a lesser but nevertheless decent quality. How many airlines provide a warm meal when the flight is delayed an hour and a half?

Apart from that, it was an ordinary Chinese domestic flight, which means very satisfactory.