By marathon GOLD 2324
Published on 9th November 2013
This is the report of my flight home, and home was then in Taipei :

This is the return flight of Flight FM802 which I took two weeks earlier. It is very early and there are only a few passengers at the economy section, but the employee nevertheless directs me to the empty business check-in counter to save me five minutes waiting time. Nice.

It is of course a regional flight: the Chinese cannot list a flight to Taiwan as being international since they claim having sovereignty over this island.

Once the immigration and security checks are dealt with, as quickly as usual in China, I can go around the terminal, which in its international (and regional) section provides an interesting variety of planes. 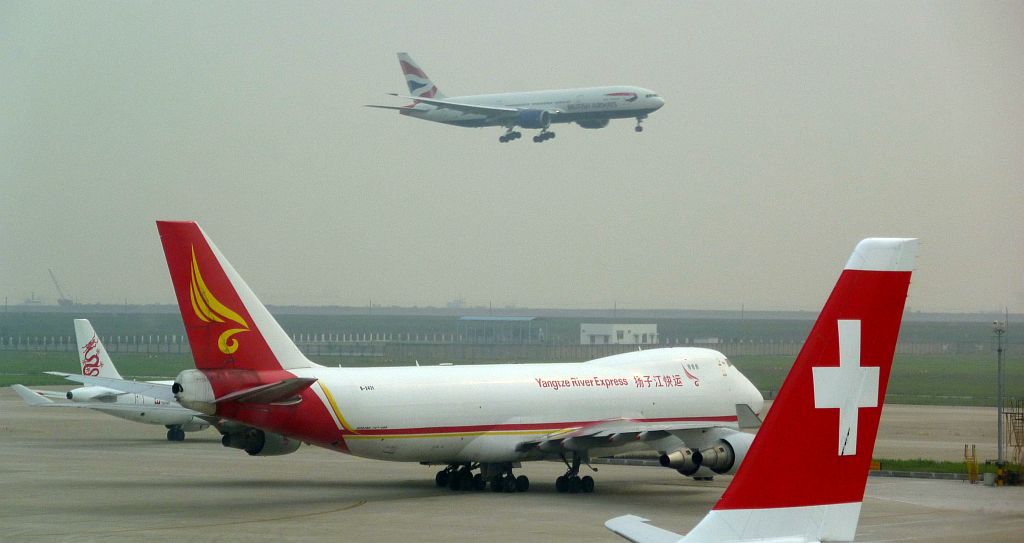 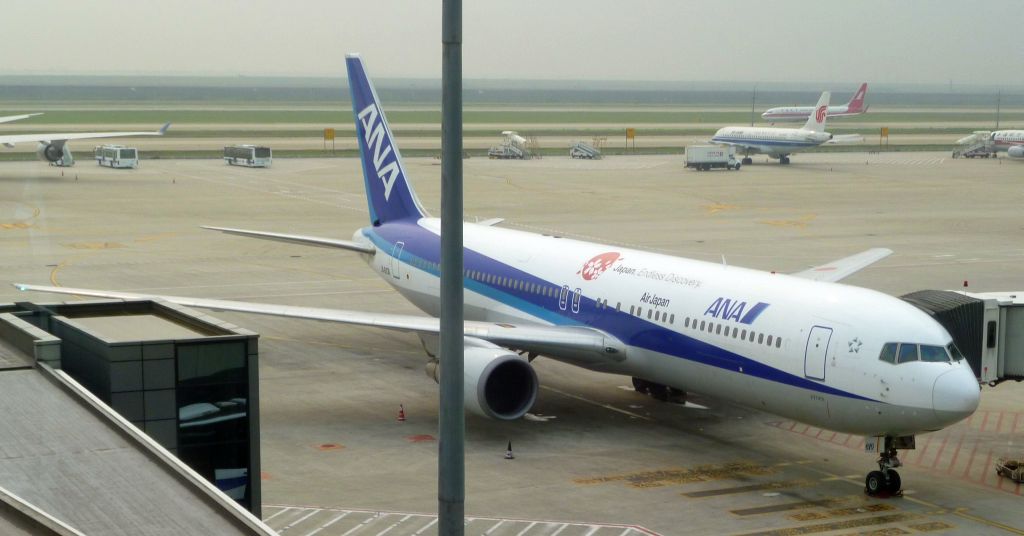 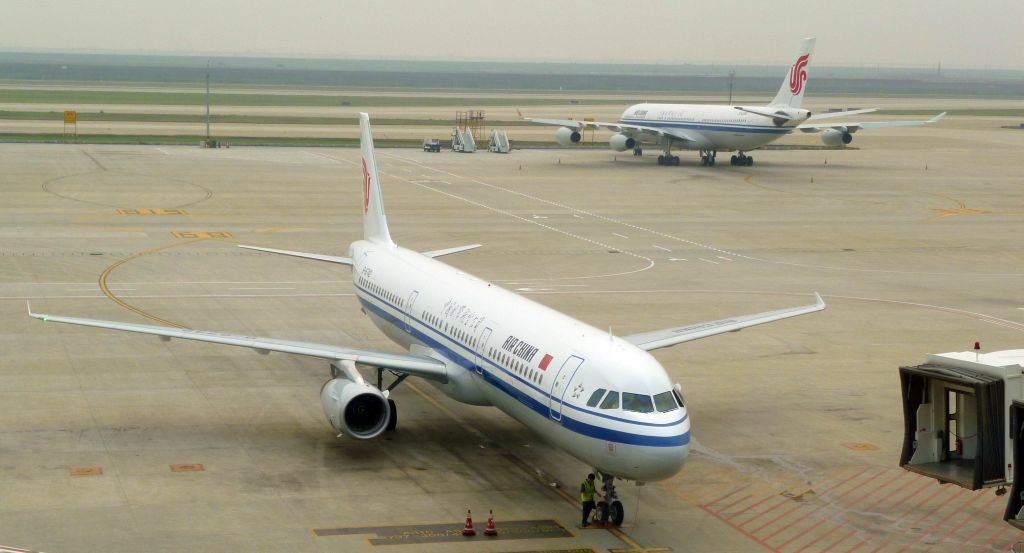 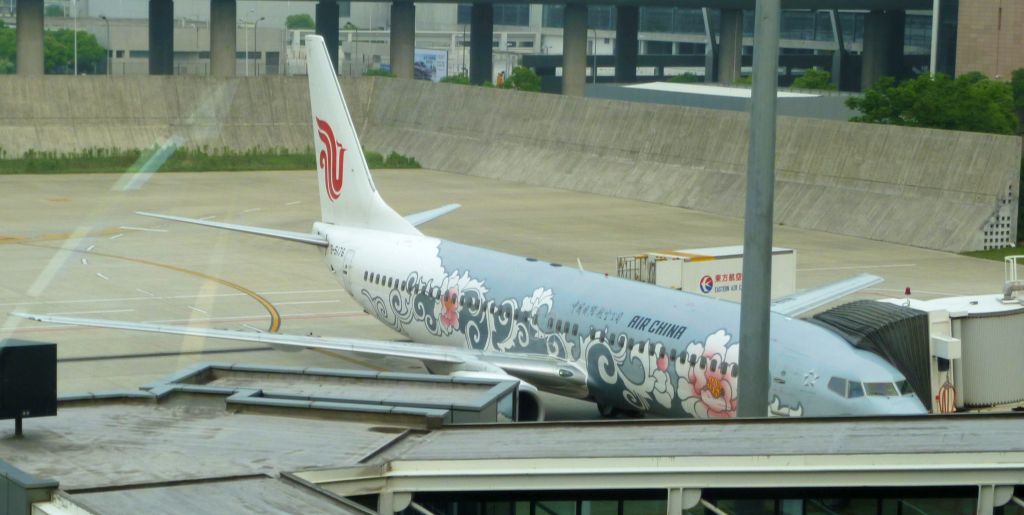 Boarding calls are mostly in three languages (Mandarin / destination country's language / English), with excellent diction and a moderate sound level, which makes the terminal rather quiet, especially wince it is not overcrowded. Curiously, all announcement mention that the flights depart from Shanghai-Pudong, which seems downright useless to me: nobody can reach the airside area with a plane ticket from another airport!

There are free internet access facilities, and no crowd for using them. But we are in Mainland China, and Flight Report remains inaccessible due to the censorship which has been increasingly tight in the past three years. 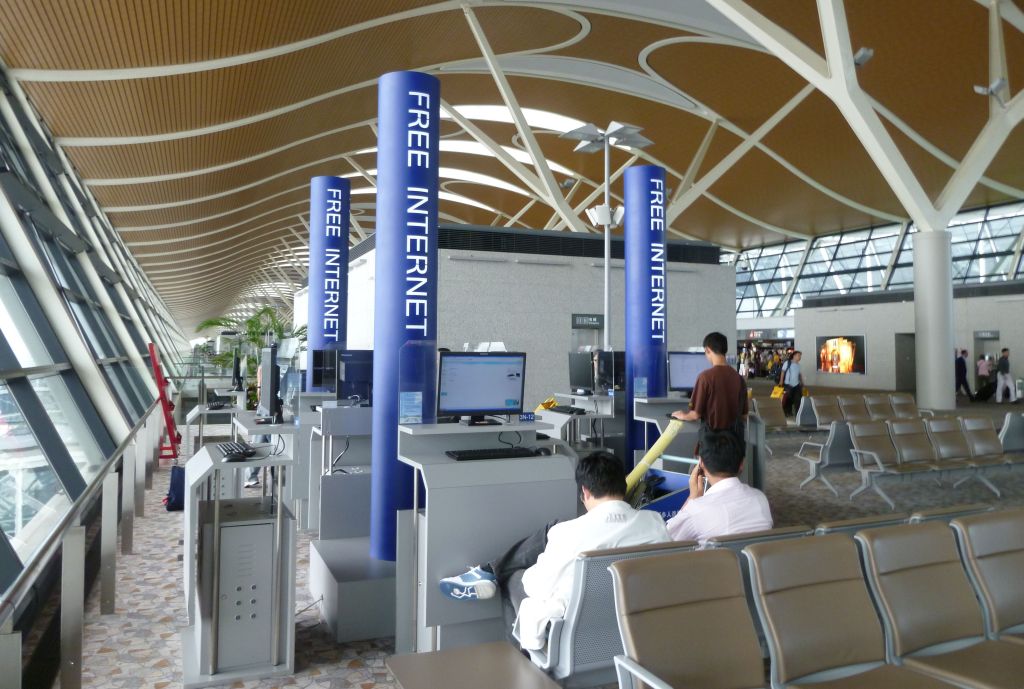 Much like in the domestic departure area, there is a small children play area.

And for older children who cannot do without their electronic toys, there are multistandard 220 V plugs to power them. 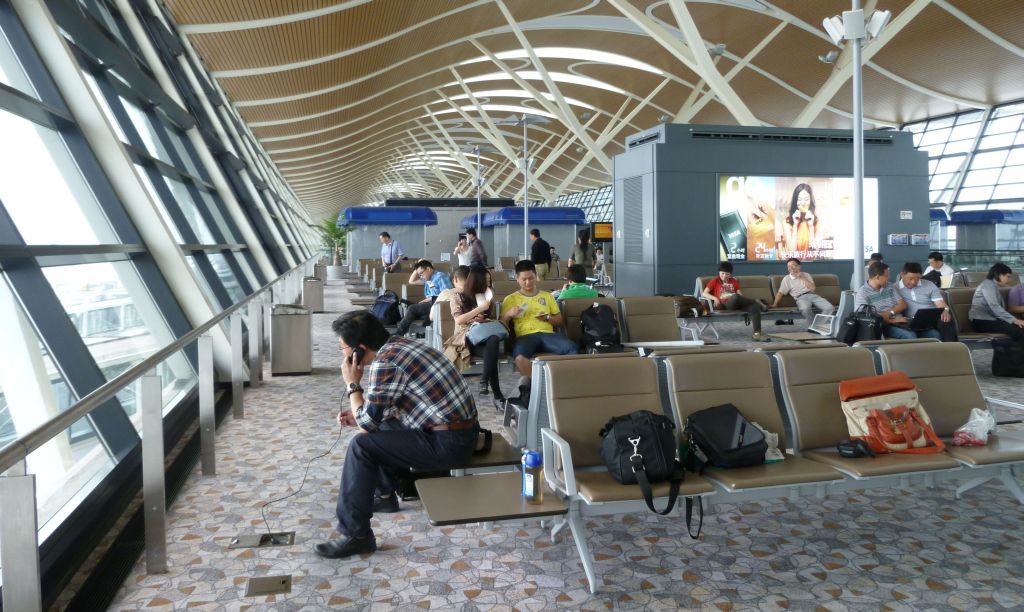 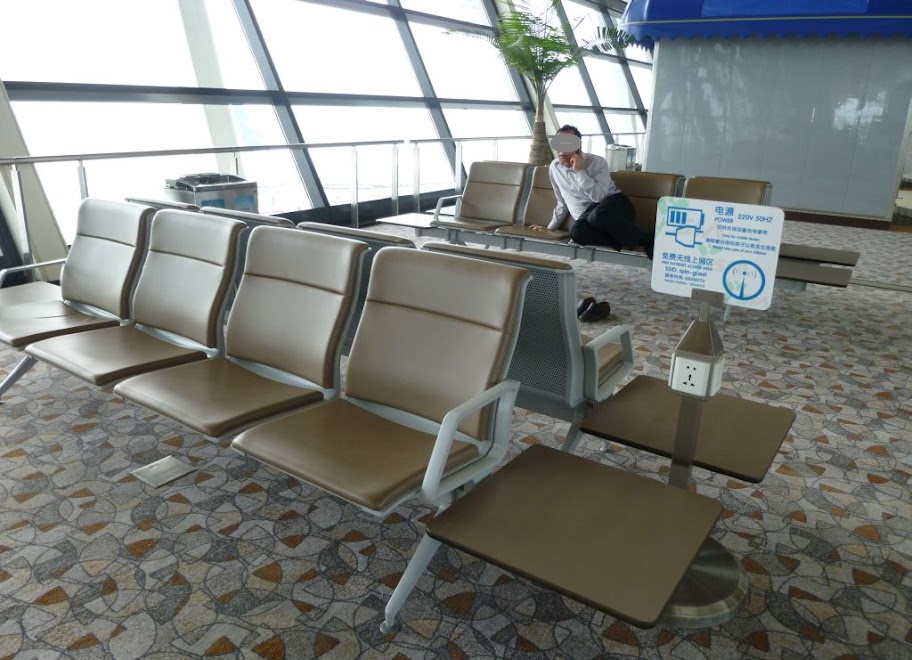 Winglet or not winglet? Since my FR on flight FM9206, we know that Shanghai Airlines has 737-800s of both types. There is one with here, with two without in the background.

The one operating flight FM801 today is without winglets. 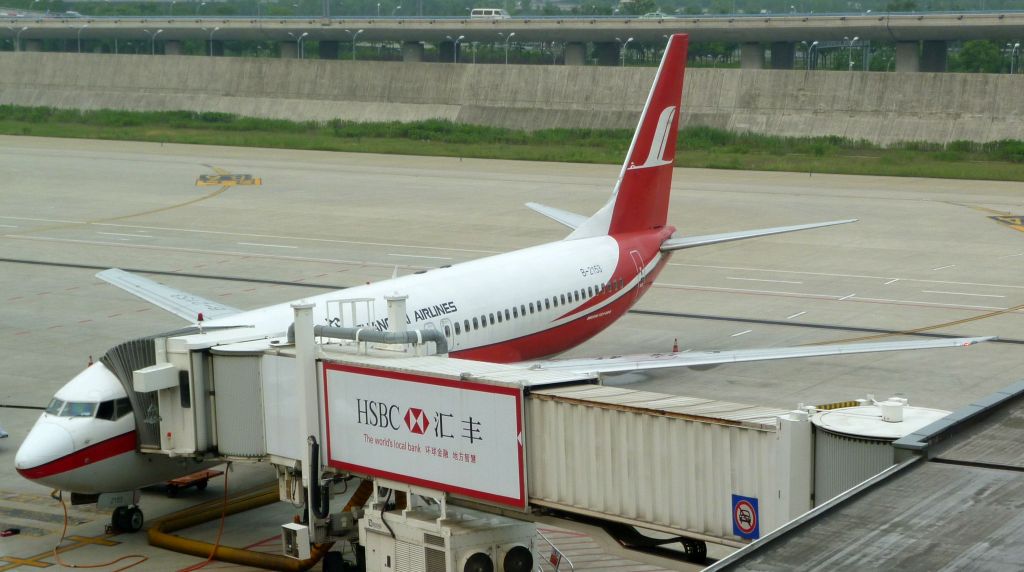 Boarding without any trouble: there are 5 passengers in J (always the same leather seats in two rows in 2+2 layout). I took this picture when leaving the aircraft. I once was upgraded on an FM flight and found them comfortable. 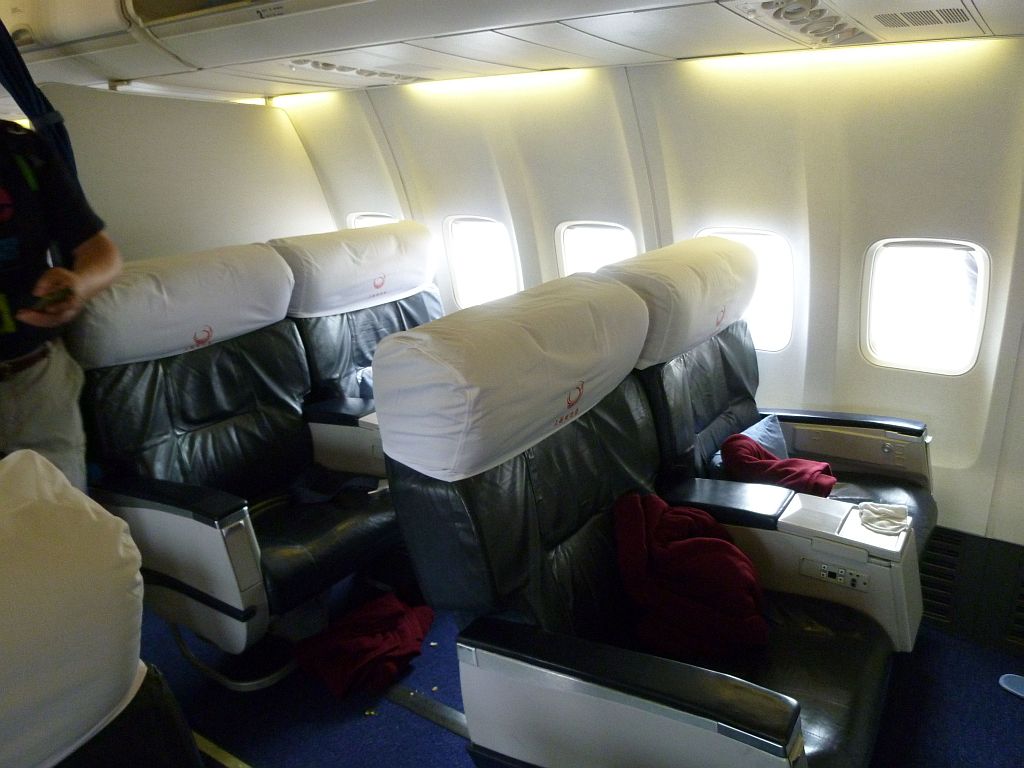 In economy, the load ratio is close to 90%. There is not much to see during the flight which is successively above clouds and the ocean. 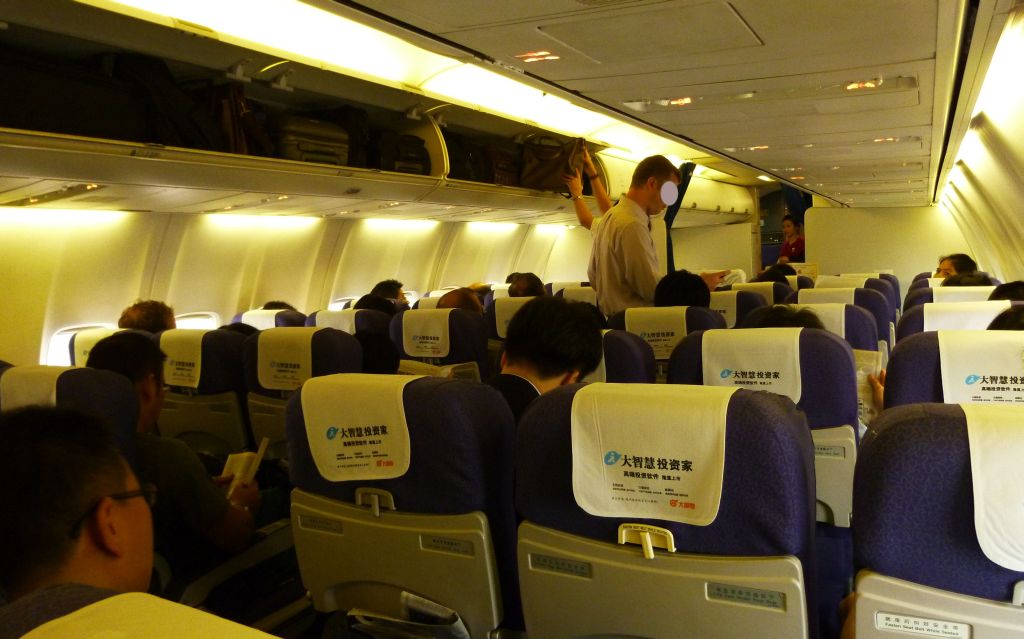 A small selection of newspapers is available on the first economy row of seats. The unusual presence of an English language newspaper gives a bonus point to FM (I also give another point for landing in TSA, which is much more convenient for me than TPE). 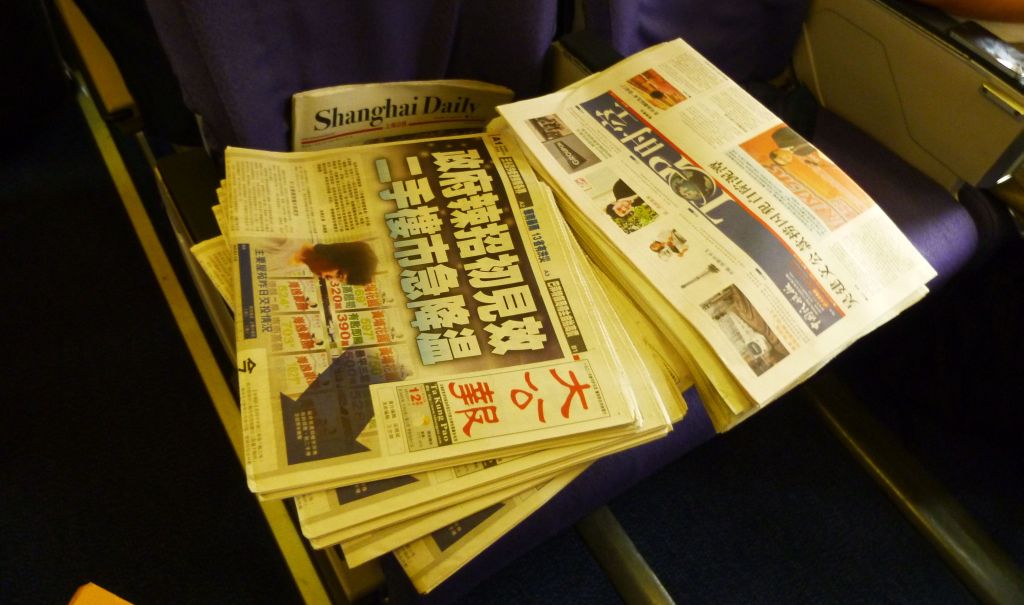 Take-off behind this China Eastern A319.

The breakfast is good and quite plentiful. As usual in China, we have the choice between two hot dishes. Let us say to make it short that they were Western-type and Chinese-type, respectively. But instead of naming them, the flight attendant shows two partly open specimens for each passenger to choose. In that case, it is a good idea, since the choice is not as standardized as for lunch or dinner. The coffee is with milk, but rather good.

When arriving above Taiwan, the ceiling is rather low, but there is nevertheless a nice lighting of Taipei. It is no chance that I asked for a right hand side window, since this provides an excellent view on the city. In the fore ground, these parks are a former branch of the Danshui river, and can be flooded in case of a typhoon. In the background, the confluent of the Dahan river (on the right) and the Xindian river (in the background), which become the Danshui on the left.

The Taipei Bridge, and the heart of Taipei on the left.

We crossed the Danshui, and we can see the Shinkong Tower (on the right), which once was the tallest building in Taipei before the tower Taipei 101 was built (on the right).

The park where the World Flower Expo was held. 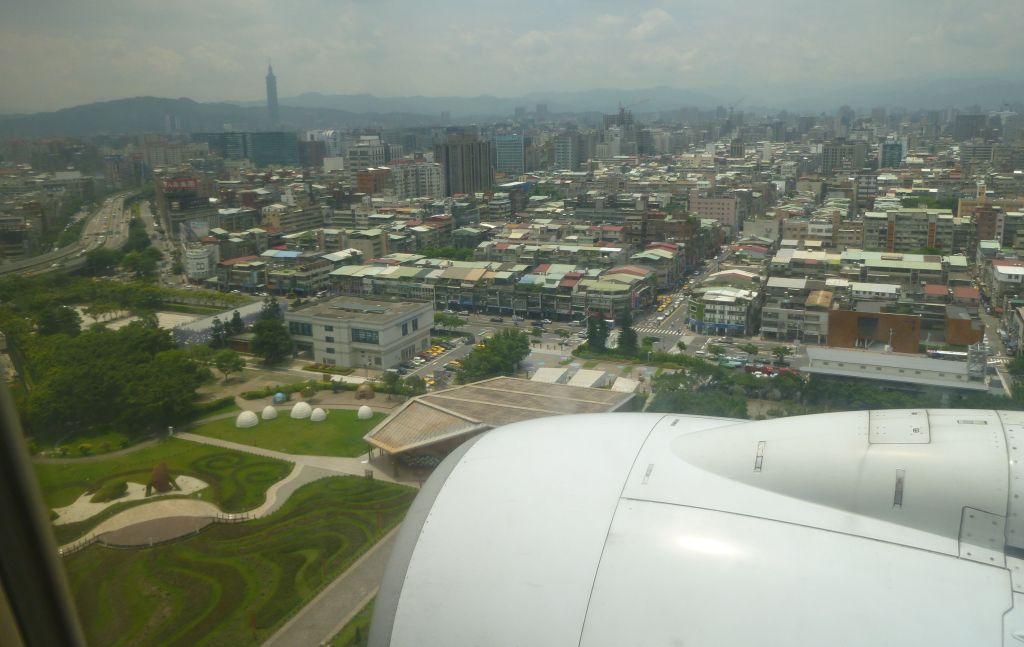 And the extremity of Taipei-Songshan airport, just before touchdown a quarter of an hour ahead of schedule. 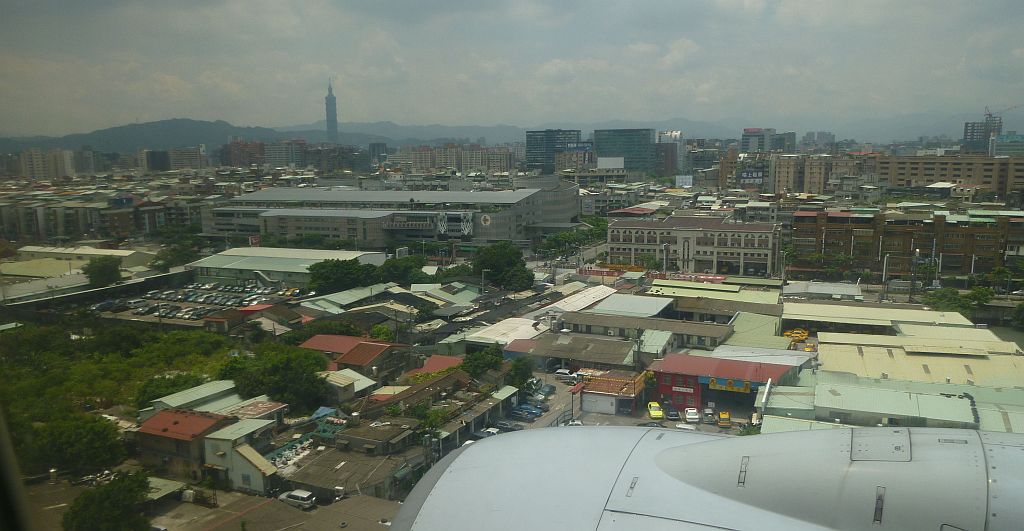 Take-off of one of the E-190s of Mandarin Airlines, a regional Taiwanese company.

And two less common planes on this website: a C-130 parked among the civilian planes.

And a Beech 350 of the Taiwan Civil Aviation Authority.

A last look at this non-winglet 737-800, with the Yangmingshan National Park Mountains in the background.

A trouble-free flight, with a plentiful food, slightly better than on Chinese domestic flights. But the quality-price ratio is much less, because the China – Taiwan flights are two to three times more expensive for the same distance: this is due to the insufficient offer, which is limited for purely political reasons. The Shanghai Daily which I read in the plane announced that the number of flights across the Straits of Taiwan would increase 50%, but the prices did not go down: the time when only offer and demand rule this market are not anywhere close.

The contributors of Flight-Report published 4 reviews of 1 airlines on the route Shanghai (PVG) → Taipei City (TSA).

The airline with the best average rating is Shanghai Airlines with 7.5/10.

The average flight time is 1 hours and 47 minutes.