By marathon SILVER 2567
Published on 23rd November 2013
This is Leg 4 of this vacation in Mainland China. I expanded the original FR in French, adding a tourist bonus in the end:

Do not mix up Taiyuan, the capital of the Chinese province of Shanxi, with Taiwan, which is not a Chinese province, no matter what the Chinese position is on that matter! Contrary to those of Datong in the north of the province, the walls of Pingyao, around one hundred kilometers south of Taiyuan, are authentic. The rich merchant town of Pingyao developed a far reaching banking system, but then the trade routes went other ways, and like the Sleeping Beauty, fell asleep at the end of the 19th century and woke up intact a century later, intact, entered the Unesco's World Heritage List, and is now the main purpose for stopping in Taiyuan on the classical tourists' route from Beijing to Xi'an. 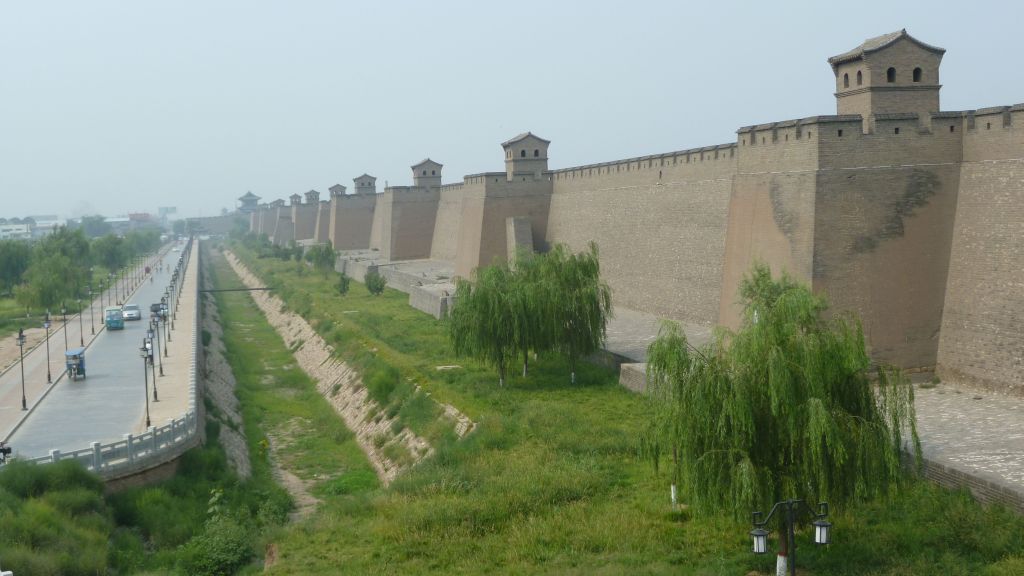 Shanxi province is rich of its coal mines, but Guizhou is the poorest of all China's provinces in GDP/capita, and apart from hydroelectricity, exports mostly maids to the major cities, like the one I had in Beijing. They don't fly, they travel by bus which is much cheaper, and it is small wonder that the plane from Taiyuan to Guiyang, the capital of Guizhou, is so small. It even stops on the way in Yuncheng (YCU), in the south of Shanxi.

Two terminals in Taiyuan Airport! I had not thought about checking where my flight departed from, but the taxi driver did not need that, because Terminal 1 is an oversized empty shell, built for the day when the traffic picks up.

Terminal 2 was then the only one in operation. 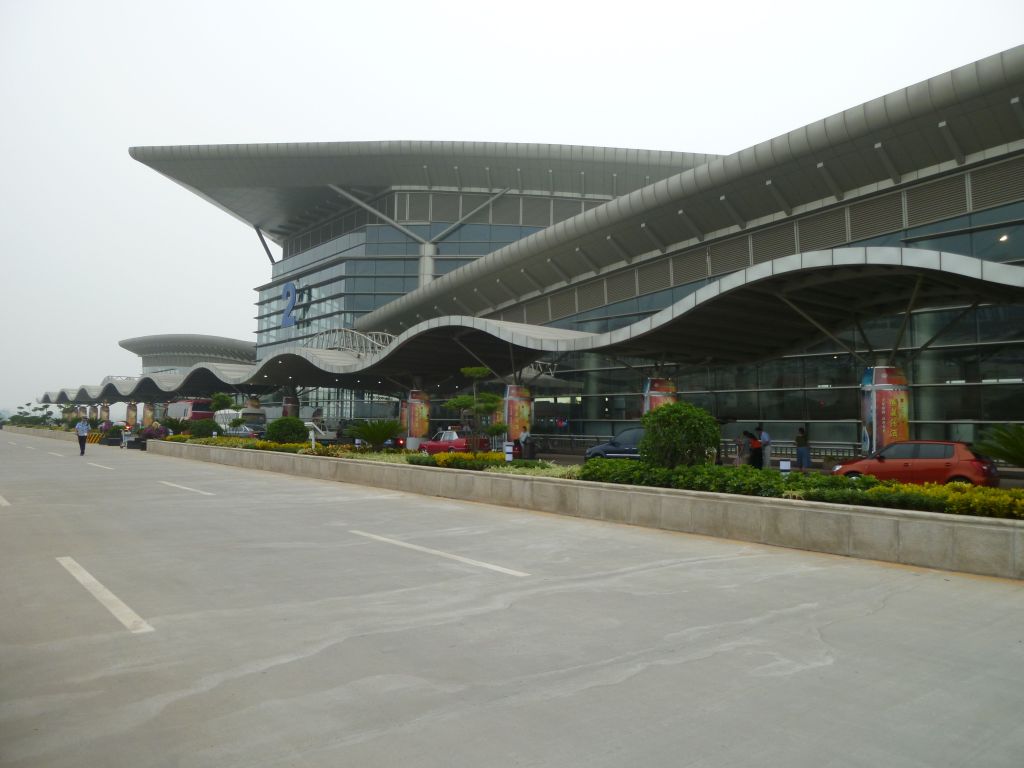 This airport may likewise be called international, there were only domestic flights. The only ones that I had not visited did not entice me. Note that there are two flights to Guiyang, at nearly the same time. China Express's flight leaves later and arrives earlier at destination, because Yuncheng is nearly on the straight line TYN-KWE, whereas the China Southern flight makes a significant detour to stop in Changsha (CSX). 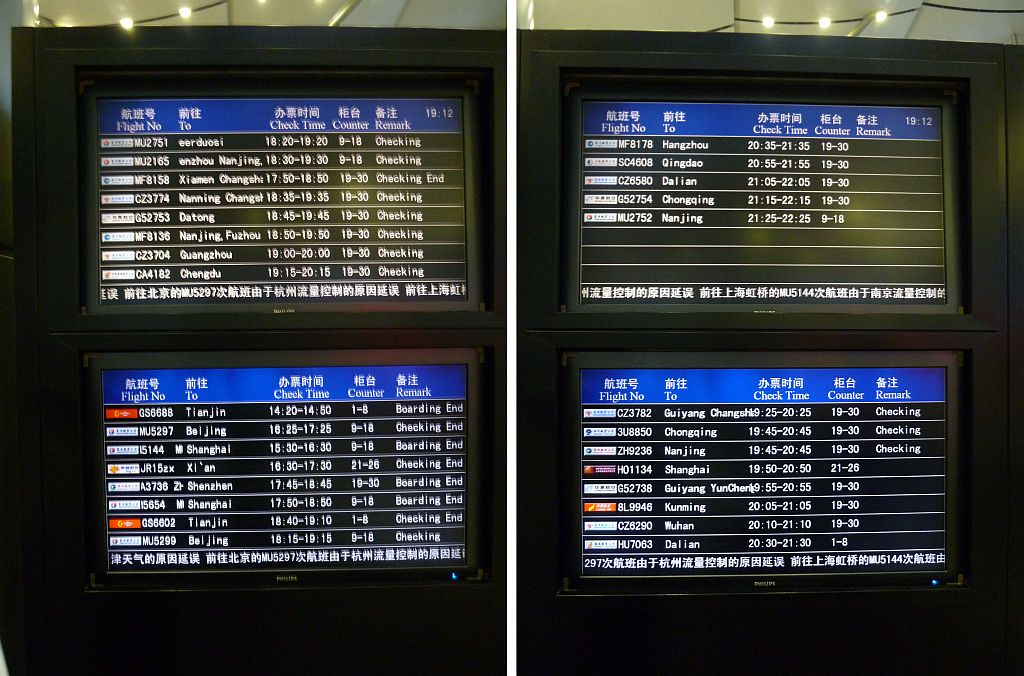 China Express has probably very few foreigners flying in its modest fleet of four CRJ-200, for its disorderly cobweb of lines is a jumble of highly exotic lines between secondary airports, some of which I never heard of, even though I travelled extensively in China by all possible means of transportation. 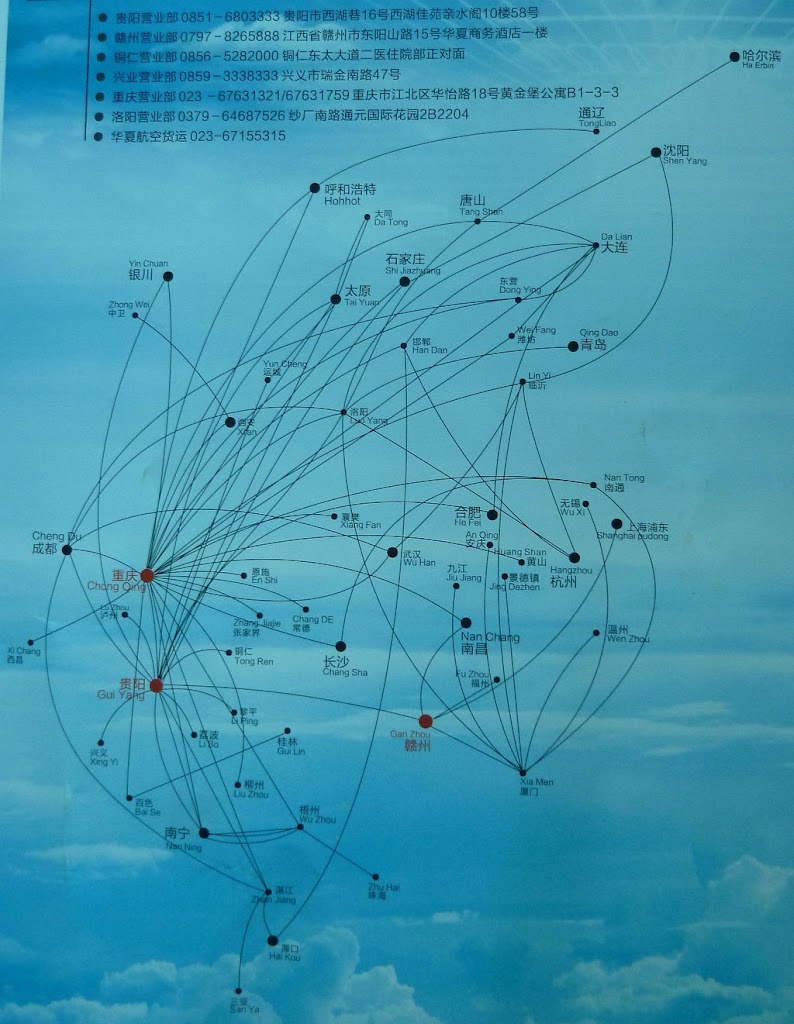 Check in only starts 1h30' before takeoff, but unusually so in China, there are enough seats landside, and there are even two power plugs which were already in use when I arrived (the cords are on the ground, background right). 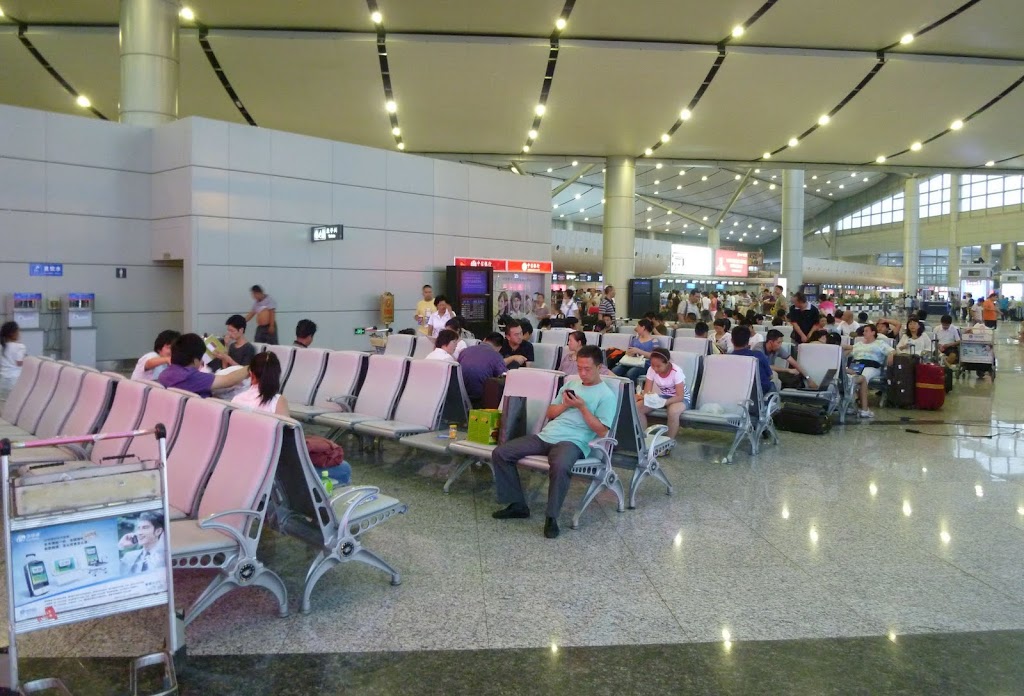 There is no daylight savings time in China, and it is not unusual to find in China a display like this one where foreign countries times are shifted one hour from the actual current legal time. It was actually 14:04 in Paris when I took this picture.

Check-in is somewhat picturesque, with a Chinese who wiggles all the way in front of me to the counter to ask if he can buy a ticket there. The obviously annoyed but nevertheless polite employee points out to him the direction of the airlines' counters, which as usual are located in the center of the terminal's landside area.

I always wonder what the Chinese carry in these carefully taped cardboard boxes. It may only be a matter of saving the expense of buying suitcases. 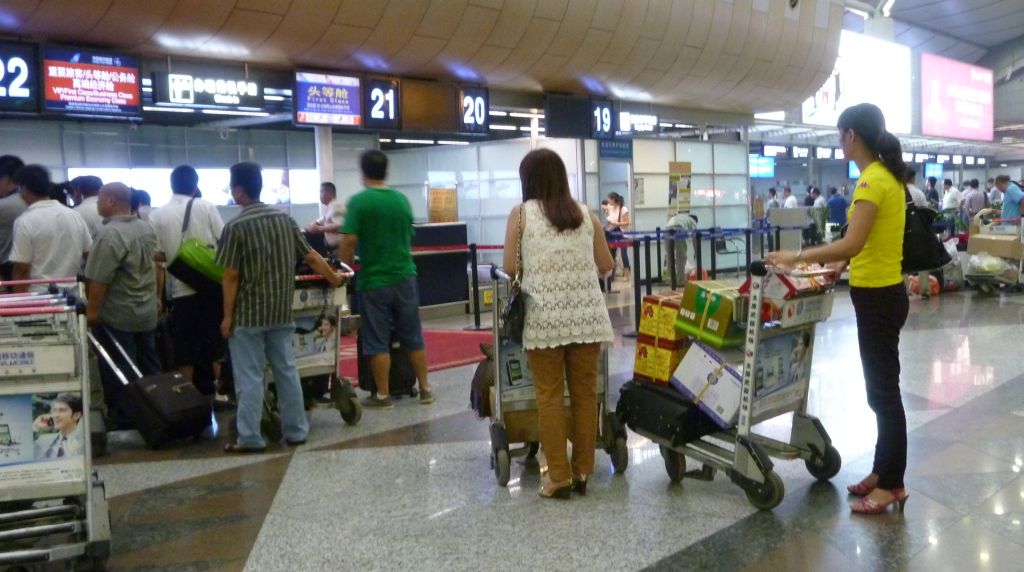 This multi airline check-in area is for small airlines like China Express. I have flown and posted FRs on four of them (and on all the larger ones whose logos appear on top). 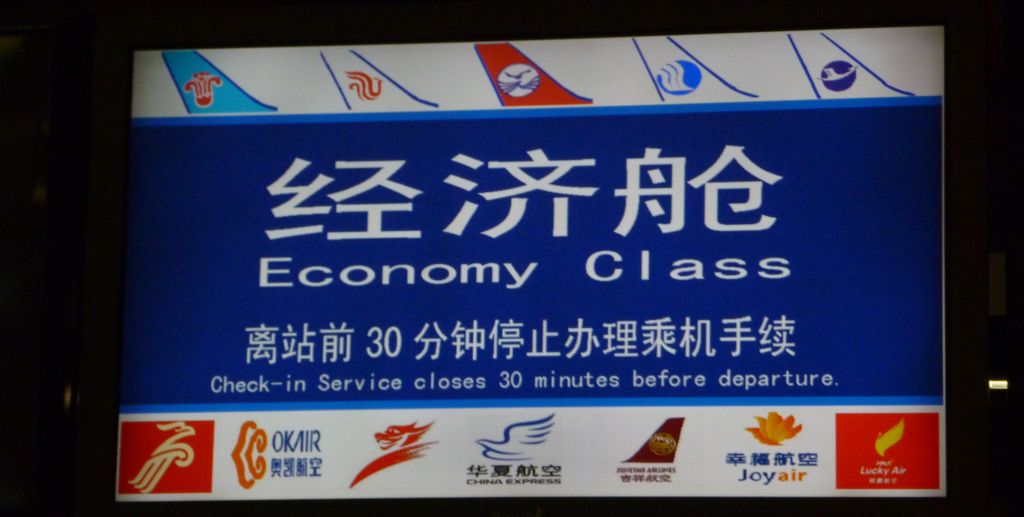 The landside area is crowded and noisy, but the boarding gates are quiet and rather empty. 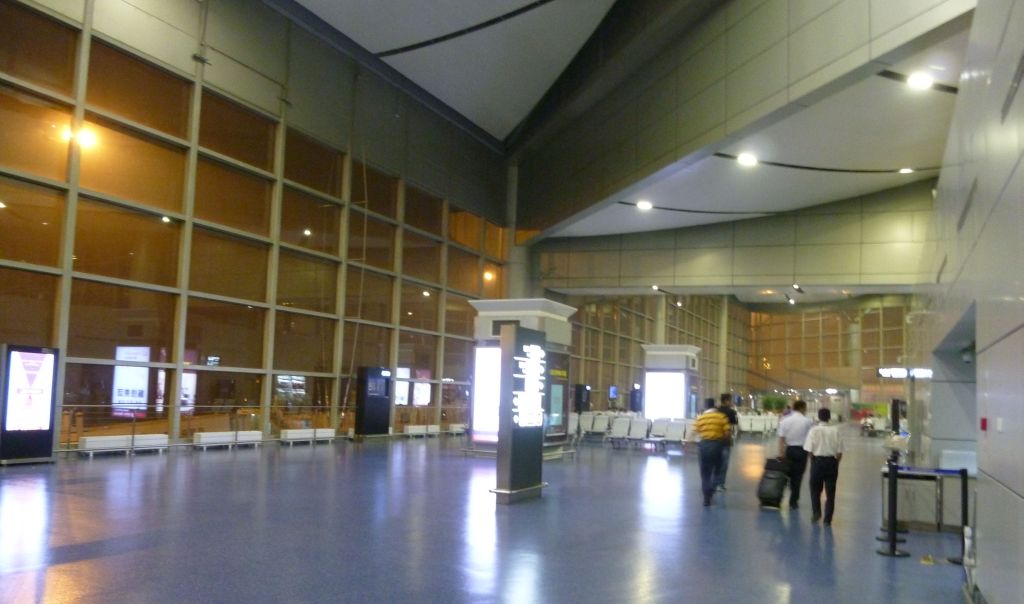 There is a J/P multi-airline lounge just after the security check; despite the plants, I can give you an outlook of that lounge. 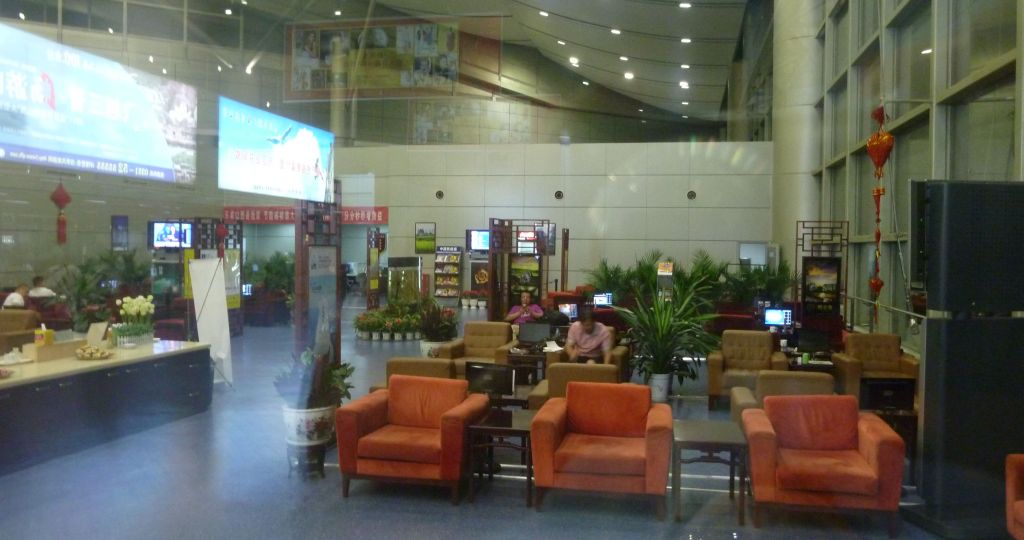 On the other hand, I have had a hard time to find my favorite ingredient of a FR: a kids' playground! It is a small unlit room with minimal play equipment. Note that here, only mothers are supposed to travel with children. 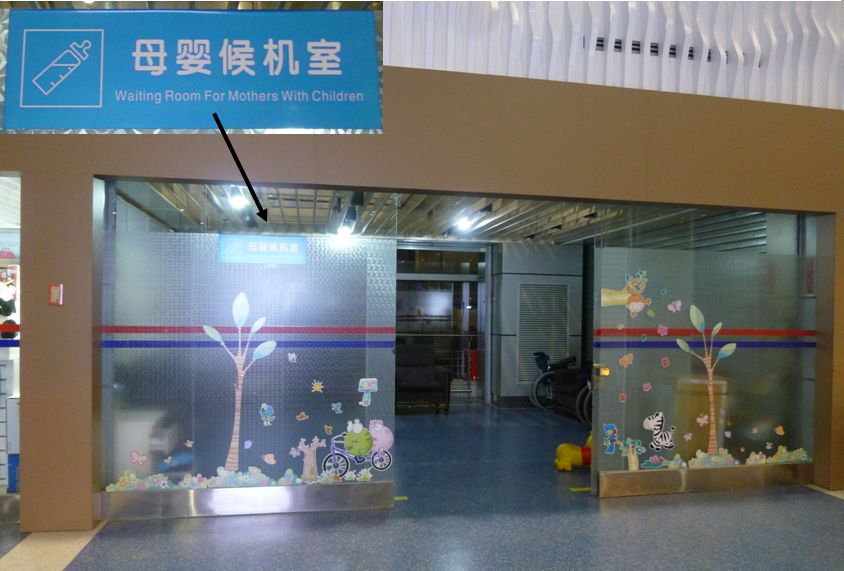 Despite the first digit of its number, gate 22 is downstairs, which means that there will be a bus transfer, which could be expected given the size of the aircraft. The flight is full out of Taiyuan, but fifty seats do not make a crowd at boarding. 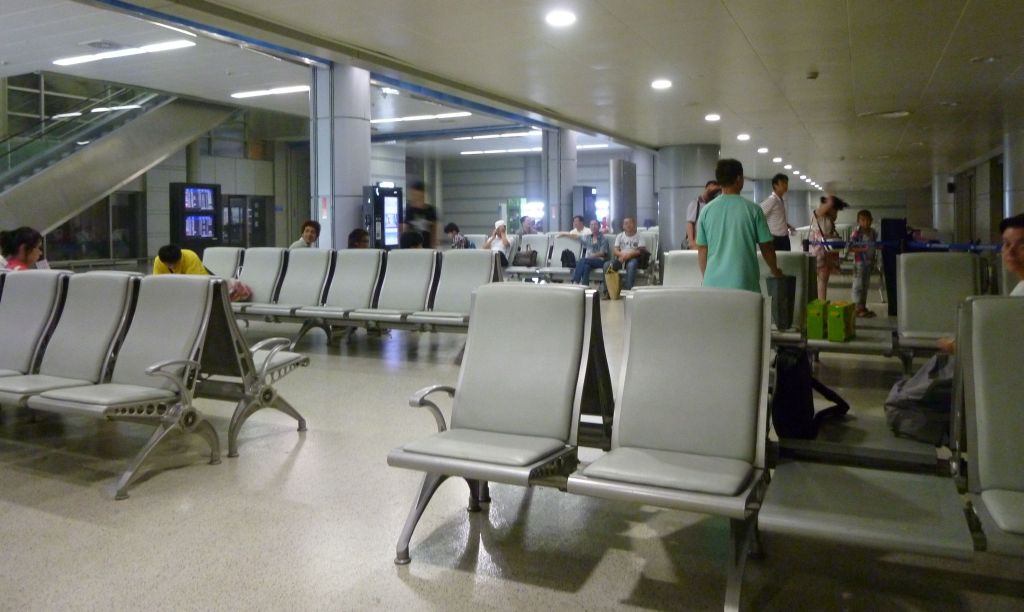 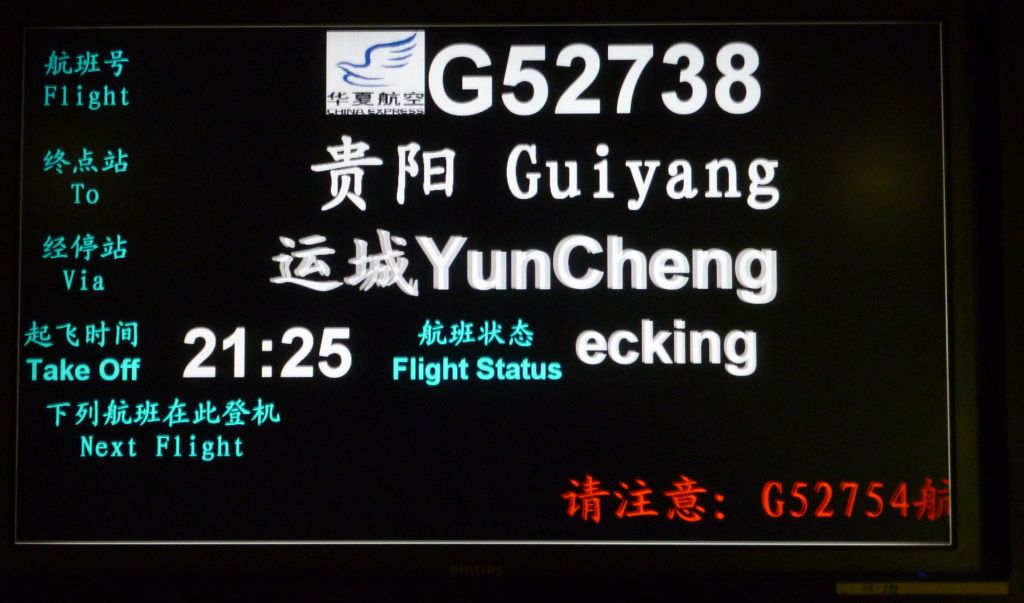 This is the mosquito on the tarmac. 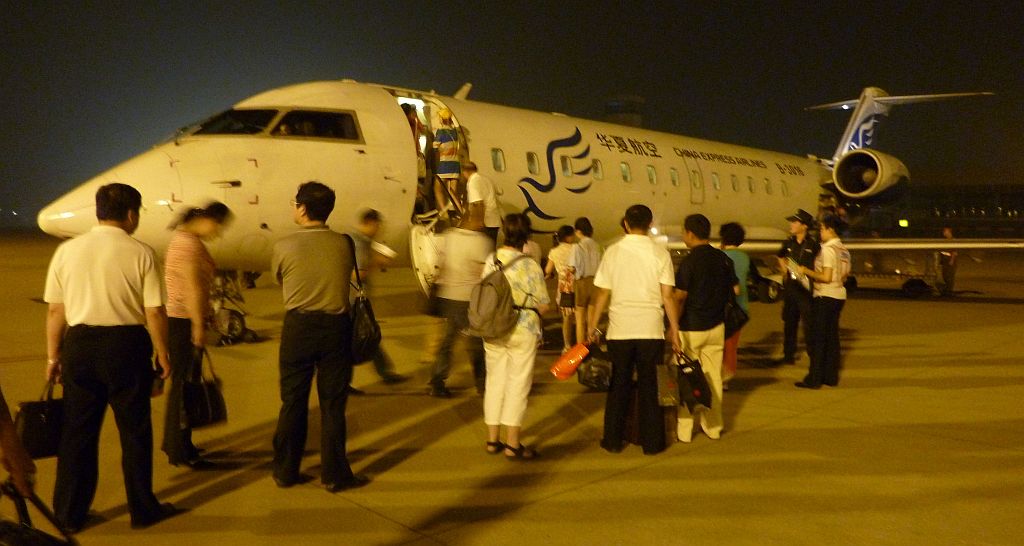 No business class; the seats are slightly narrow, but the seat pitch is comfortable and I can easily type the first draft of my FR on my laptop. 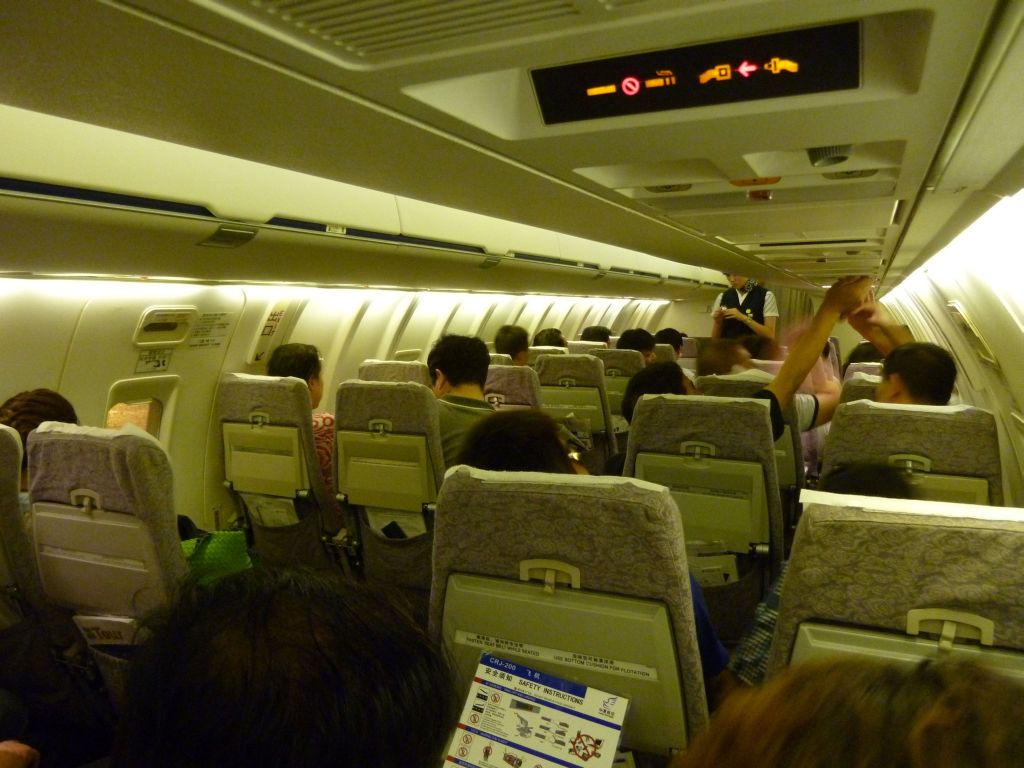 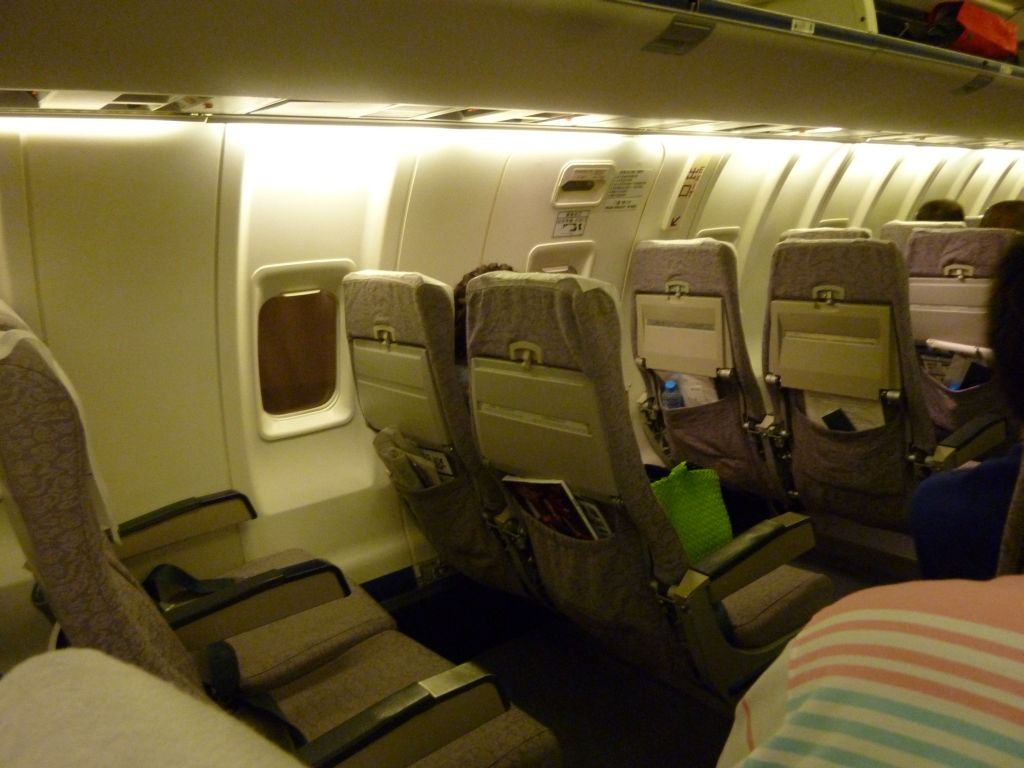 The plane takes a lot of runway before taking off, maybe because it is full. At full power, the reactors' noise has a high pitch (of a mosquito?), unexpected when you are used to 150+ seater planes.

Shortly after takeoff, there are some (few) turbulences, which generate these two messages:
We have been through turbulences, do not worry [ditto, in Mandarin and in English], and keep your seatbelt fastened.
We are flying in the direction of Yuncheng, around three hundred kilometers from Taiyuan. Our flight altitude is 5,400 meters. Passengers to Guiyang are requested to remain on board; we shall stop for around fifteen minutes.

There are two FAs, but only one provides service at a time (the woman on the first leg, the man on the second one). It is minimal on the first leg: a bottle of 330 ml of water. What more would you expect on a 29 minute flight? 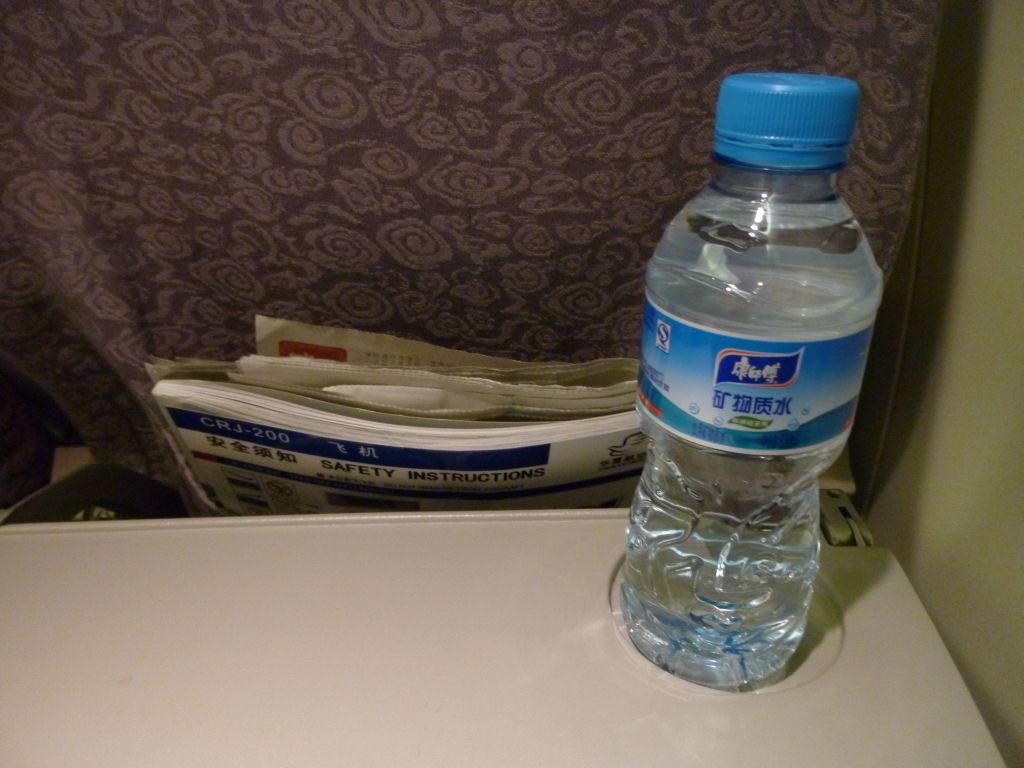 21:53: touchdown in Yuncheng, a tiny airport without a taxiway and where there is only one aircraft parked in front of the terminal: an Air China 737-700 photographed here when leaving.

Around twenty passengers leave in Yuncheng (including, which was good news, the Chinese who continuously and loudly sniffed ever since takeoff).

Two cleaning staff go in the aisle to recover the bottles of water that they left, but not the newspapers – I tried to get rid of one that a passenger had left at my seat on a previous flight. 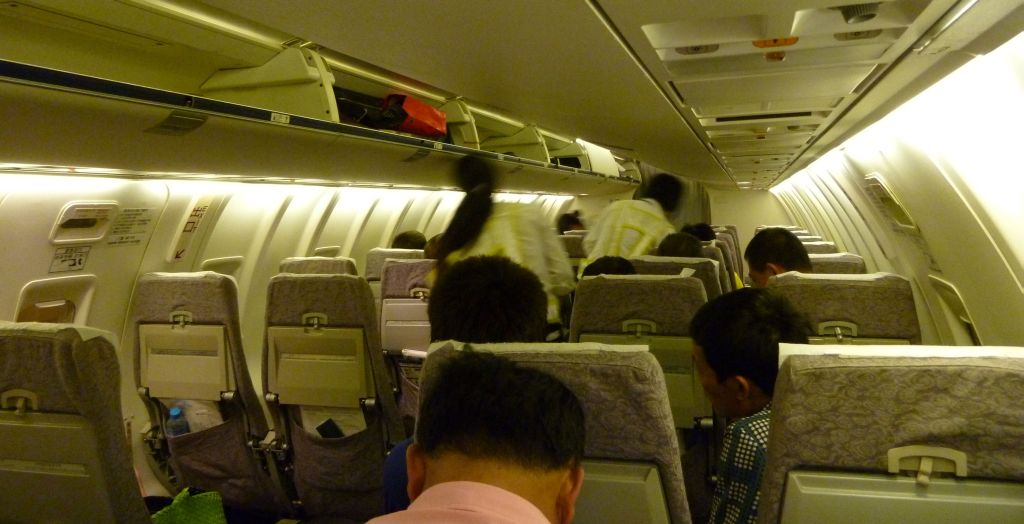 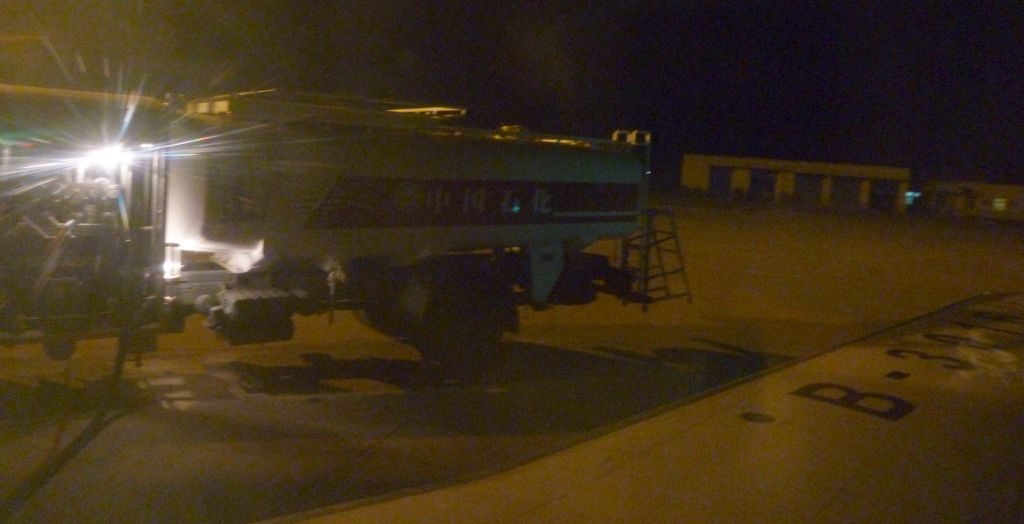 22:04: eight passengers come on board
22:13: take-off, having spent exactly twenty on the ground in Yuncheng.

It was no longer dinner time in China, but I had the pleasant surprise to receive another 330 ml bottle of water and a dinner box. 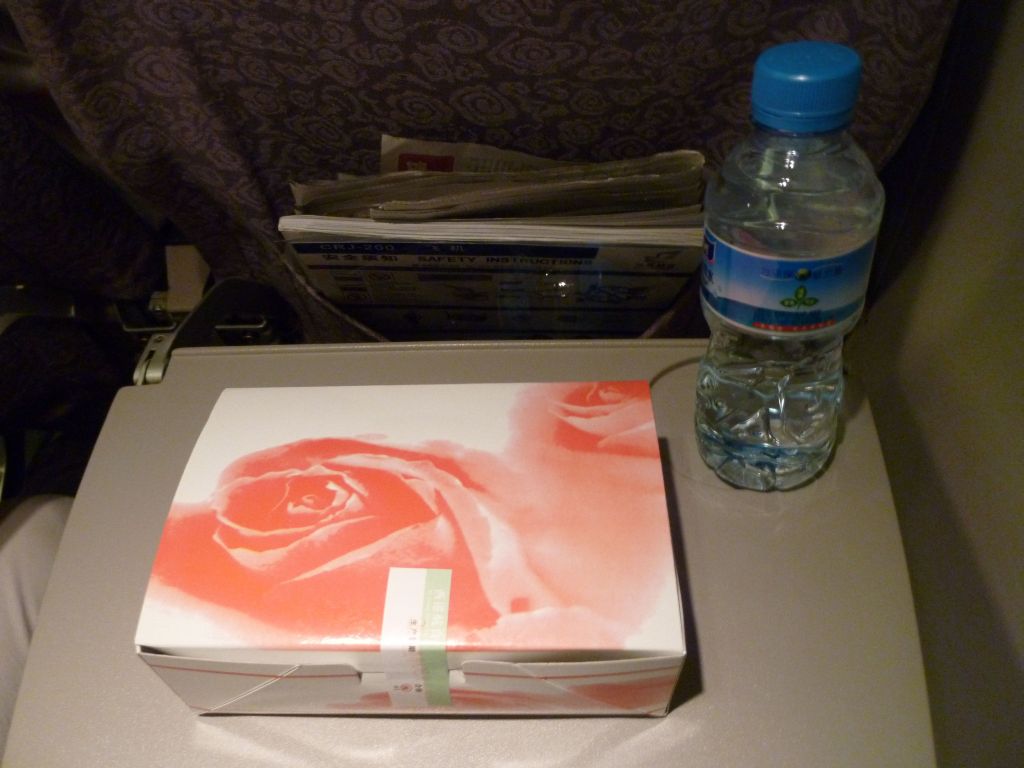 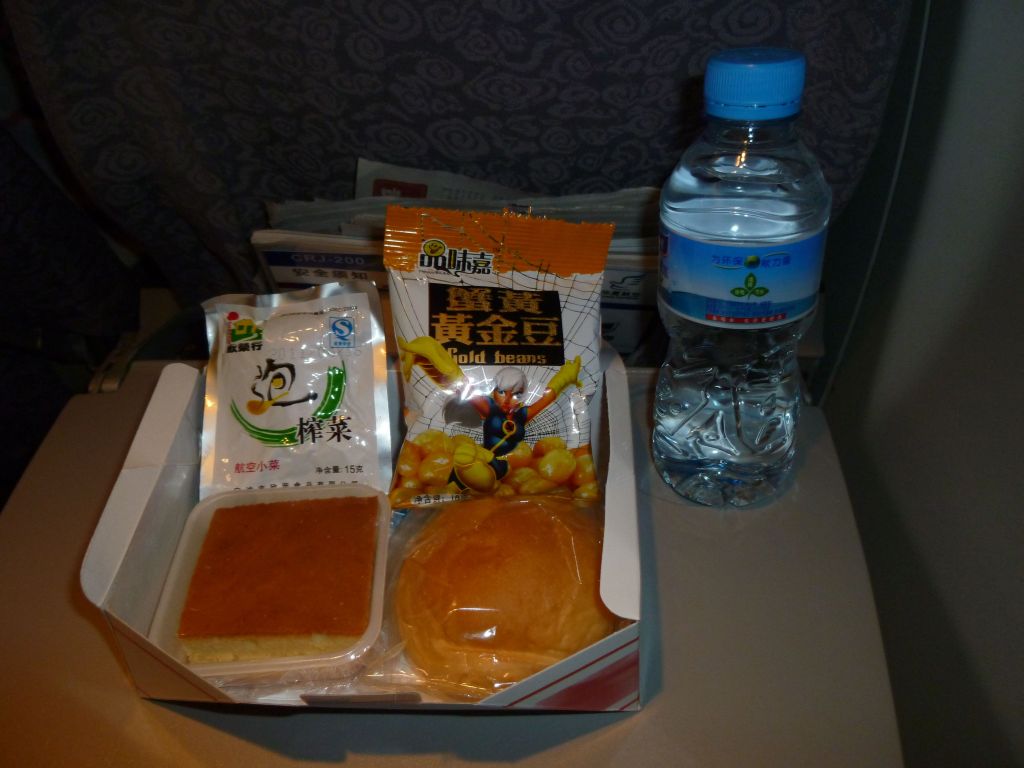 There is a pack of 15g of pickled vegetables, 18g of dried peas, a small bread and a cake. This is not high level gastronomy, but it does feed you.

The Chinese often have a hard time with the Latin alphabet: see the welcome message on the toothpicks. My written Chinese is nowhere as good as their written English, though.

The FAs pass in the cabin every twenty minutes or so, without any call from the passengers. Maybe they were checking that the seatbelts were on, but I do not remember any turbulences – it was actually a very quiet flight. A bonus for the FAs.

Touchdown at 23:49 and arrival at the parking space guided by a Follow me car. There are three Tianjin Airlines Embraer in the background.

A bus is waiting for us to bring us to the terminal; it is a race with the small vehicle which carries the few checked luggage which have been unloaded while we were leaving the aircraft. I was nearly the first passenger in the luggage delivery room, at the same time as my suitcase which was last to arrive there: delivery was over at 00:01.

This was an unexpected miracle: despite the time, there was still a shuttle bus to the train station, and at 00:07, I was on the way to the city center… eight minutes before the scheduled landing time!

I had the impression that Guiyang Airport was small, but it was hard to see much at midnight. The next day, I boarded a bus from the main bus station for my on-going journey. It was one of the largest I ever saw in China – the inhabitants of Guizhou travel by bus, they don't fly – and it was possible to buy a bus ticket to anywhere in China, on the condition to know where to buy it, because each counter on the right handles a single destination, displayed in red in Chinese only overhead. 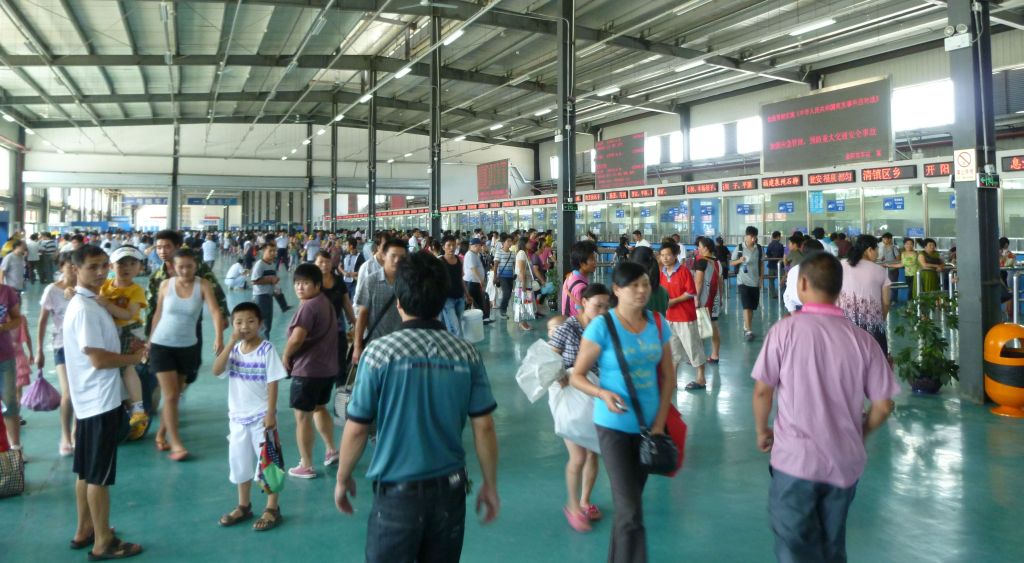 This is the end of this FR; you can skip the ensuing tourist bonus which is an addition to the original FR in French.

My destination was Kaili, in the heart of one eastern Guizhou's ethnic areas. Kaili itself is rather non descript; the villages around are wonderful.

A village in the hills

.. where people congregate for a local festival. That is where a 125cc motorcycle is considered a means of mass transportation.

There were refreshments for the participants : homemade rice alcohol beyond the 100 proof mark.

The Miao minority is famous in China for the horns of their silver headdresses.

Guizhou is located in the heart of China, and is its poorest province. In some respects, it is one of the most remote of the country.

Why did these other villagers congregate ?

It was one of the other local traditions:

This one was called a draw, and it took many people to separate them

China is a place apart in the world

And Guizhou is a place apart in China

The CRJ-200 is a friendly small plane, slightly noisier than the 737 or A32x (especially in the rear seats), but there is no middle seat and the seat pitch is comfortable. Passengers often complain that its windows are too low, but that was not an issue for a night flight. Boarding, leaving, and luggage unloading are of course three times faster than in a 150-seater plane, which explains my comfort rating. Tall passengers (I am not one of them) may have a problem with the low ceiling: the female's FA's bun barely made it under the Emergency Exit sign.

Efficient and careful FAs, a simple but present meal despite the lateness, an arrival nearly half an hour ahead of schedule… what more do you want? China Express is a tiny third level airline operating out of the way routes, but is on par with the larger Chinese airlines.

That was my initial conclusion when I posted the original French version of my FR. But two weeks after my flight, on September 1st, the Chinese Civil Aviation administration suspended the operation of China Express for a safety review, after the accident which occurred on 28 August at 01:58: the CRJ-200 registered B-3001 operating Flight G52744 Shijiazhuang – Guiyang scratched the right wingtip on the runway at landing. Nobody was wounded, and I did not find any more details on the Chinese websites, only that China Express resumed operation.

Traffic on the line has picked up: the two daily flights are now operated with a 738 and an E-190 by larger airlines.